SOME people may say that Daniel Axisa took the easy way out, purchasing a car that was already done and adding a few of his own personal touches, but I’d argue it was the clever option, not the easy one. If you knew the car from before you might think not much has changed; it still wears the same Heron White paintjob and American Racing VN500 rims, even the same driveline, but Daniel has fine-tuned the car’s styling and put a bunch of time and effort into detailing – especially in the engine bay. 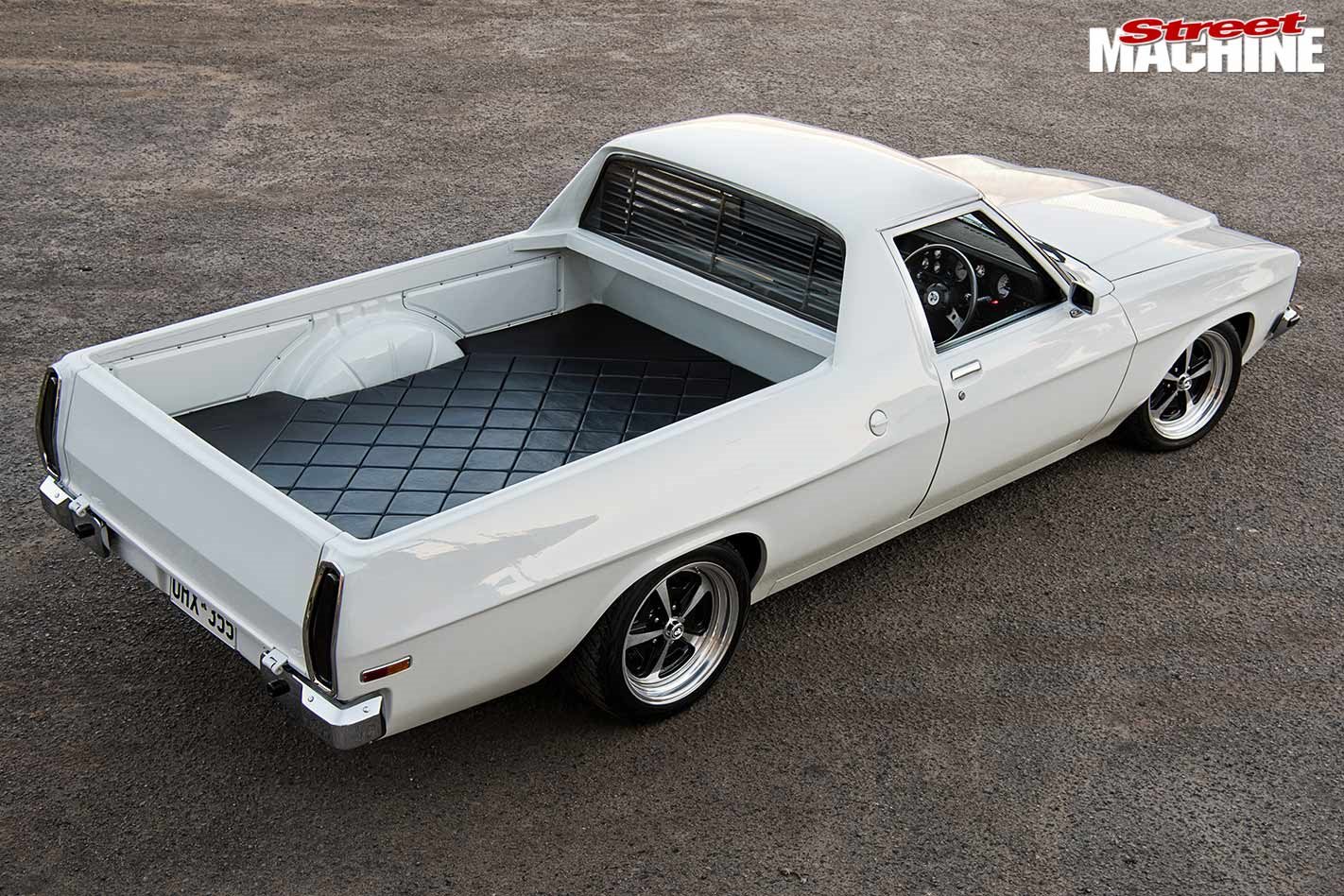 Daniel hasn’t had to touch the paint on the car, as he’s stoked with how nice it is, although he did re-chrome things such as the tail-light surrounds and mirrors

“The car was originally built by Steve Strick from Ballarat, then someone bought it and got it all sorted for registration here in Perth, then I got it from him,” Daniel begins. “I’d been looking for a white wellbody for a while; I’d wanted one for about 10 years and got this one back in 2016. It was built for the drags, so it had a full-spool and 4.11 gears. I’ve changed them out to a Truetrac LSD and 3.55 gears just to make it more streetable. Originally, SJH Race Engines did the motor, so it had a solid cam, but it was like a sprintcar cam, so I put a hydraulic-roller in it. That’s the only thing I’ve done internally to it.” 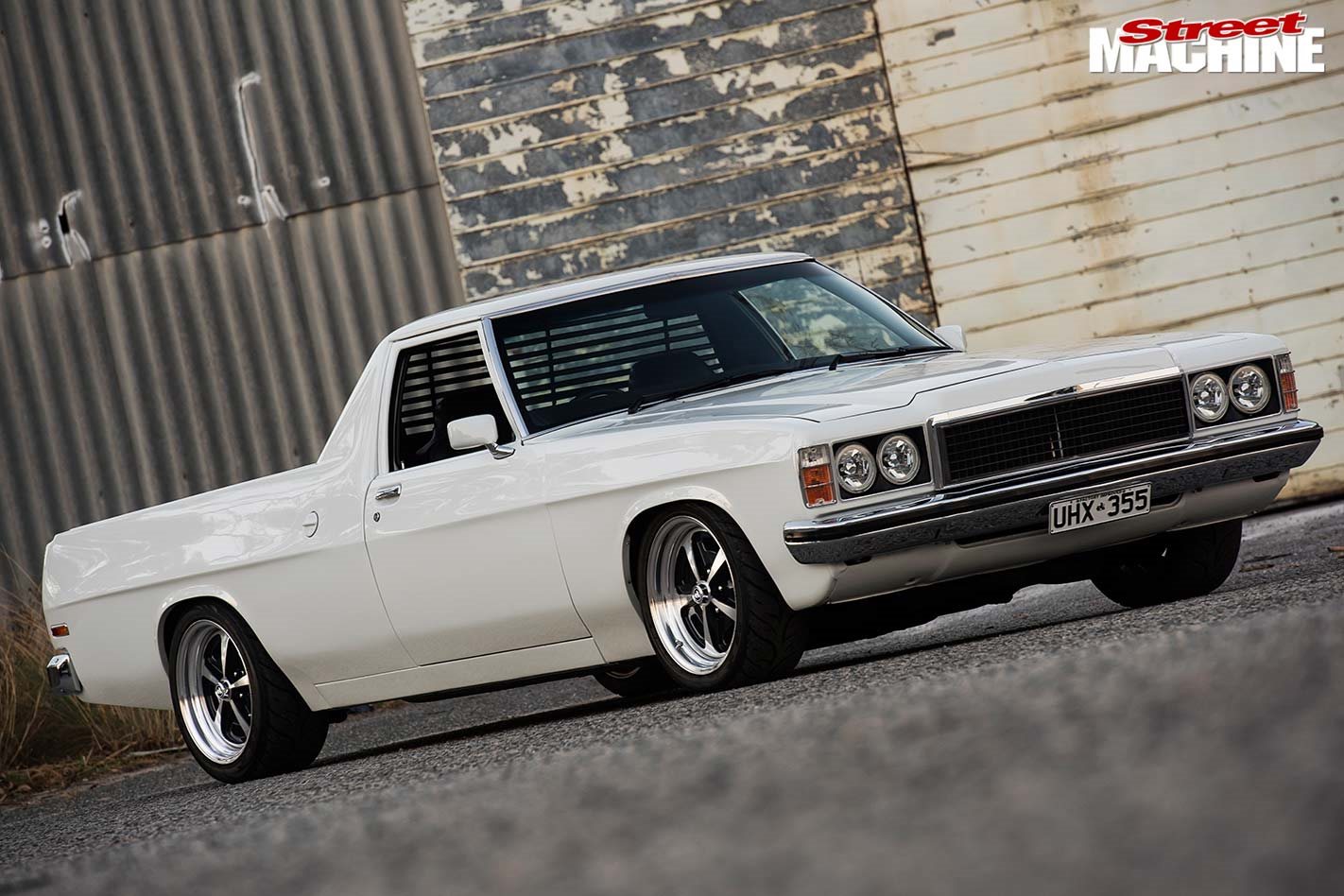 While Daniel was swapping the cam out, the old mechanical water pump got the flick in favour of an electric unit, but not much else has changed with the major components in and on the engine; to be honest, there was no reason to stuff around with a perfectly good combination. The mighty 308 has been stroked out to 355 cubes – to make it even mightier – with a Scat crank and I-beam rods topped with Probe forged flat-top pistons, taking the compression up to 10.8:1. The VN heads help out with the breathing, while some Yella Terra roller rockers make sure the signals from the Camtech cam get through to the valves. Up top, a 780cfm Pro Systems carb mounts to a COME Racing single-plane manifold, while a set of Pacemaker headers work their way back to a twin 2.5-inch system. All up, that’s good for 350hp at the tyres; more than enough – for now. 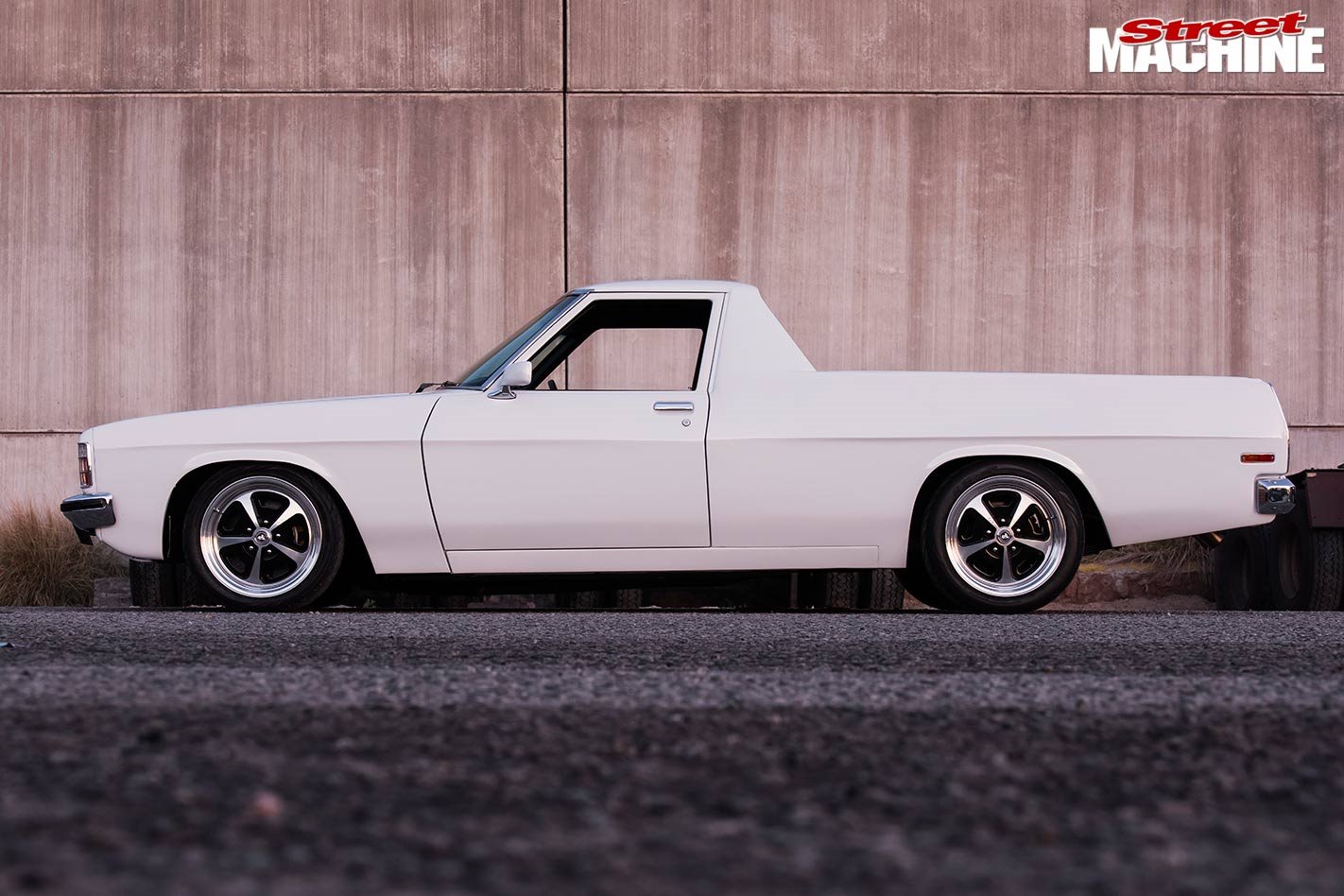 What has changed in a big way is the appearance of the engine and engine bay, with Daniel keeping to a strict theme when it came to the finishes of the various components: “The engine block was black, but it had a lot of chrome hanging off it. The bay had black inner guards, black firewall, a lot of cabling and wiring everywhere, and the battery was still in the engine bay as well. Now, anything that comes off the engine is black and anything that’s white has chrome or billet coming off it. The only thing that’s missing, only because I haven’t been able to find one, is a chrome heater motor. That’s the only thing that engine bay needs, because if you look on the left side, the master cylinder is chrome but the heater motor is white. To chrome mine you have to rip it apart, and I don’t want to do that.” 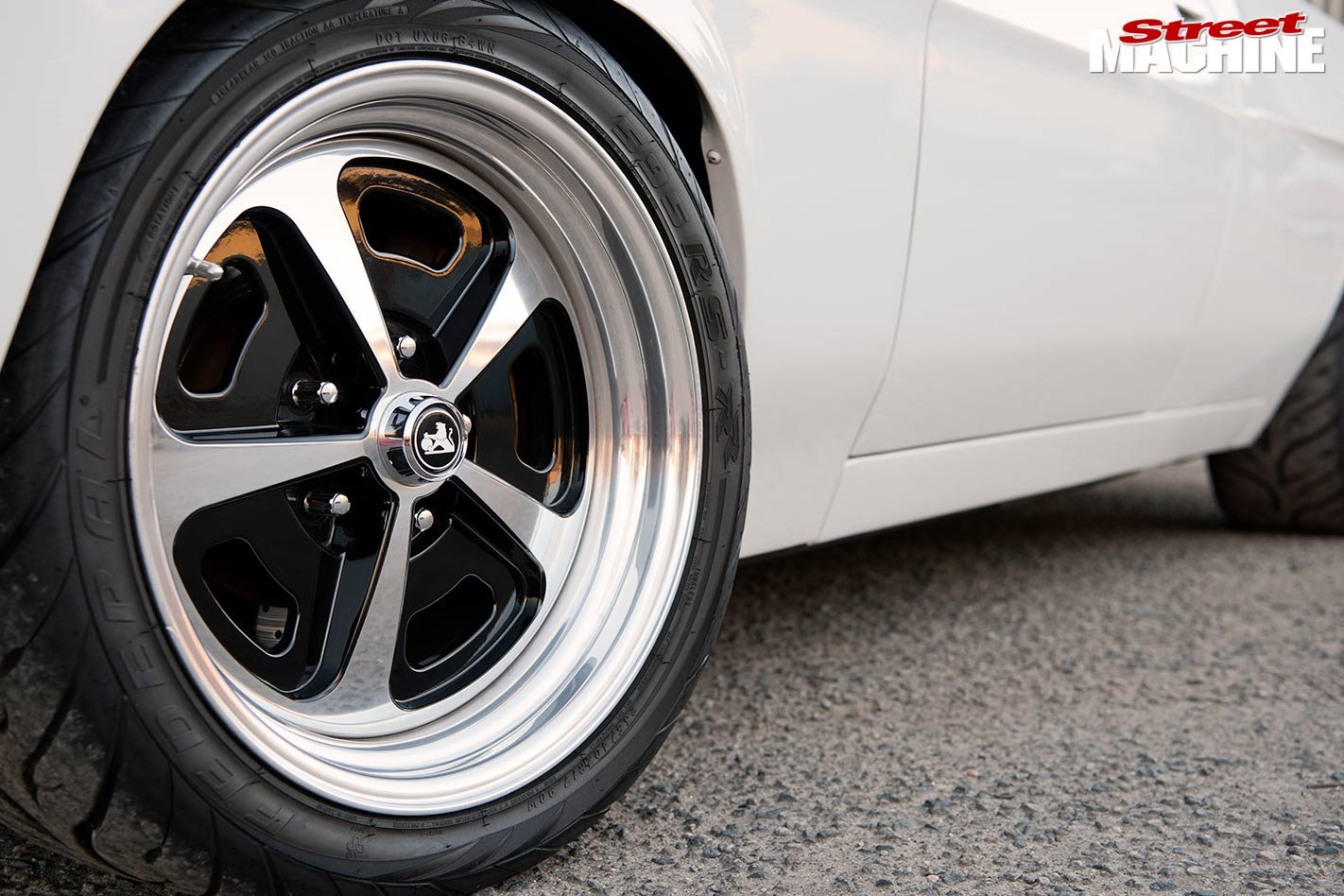 American Racing VN500 rims are pretty close to an upscaled GTS rim, perfect for the updated OEM look that Daniel was after

It’d take a pretty fussy person to worry about such a small detail, but that’s what it takes to get things just right. For instance, check out the symmetry in the engine bay. Daniel was fastidious about it and went to a lot of effort getting everything lined up. “The breathers took a lot of trial-and-error to fit close to the radiator and make it all flow,” he says. “We had to cut the radiator support panel to get them closer and at the same height. Tim from Forged Automotive nailed it in the end.” 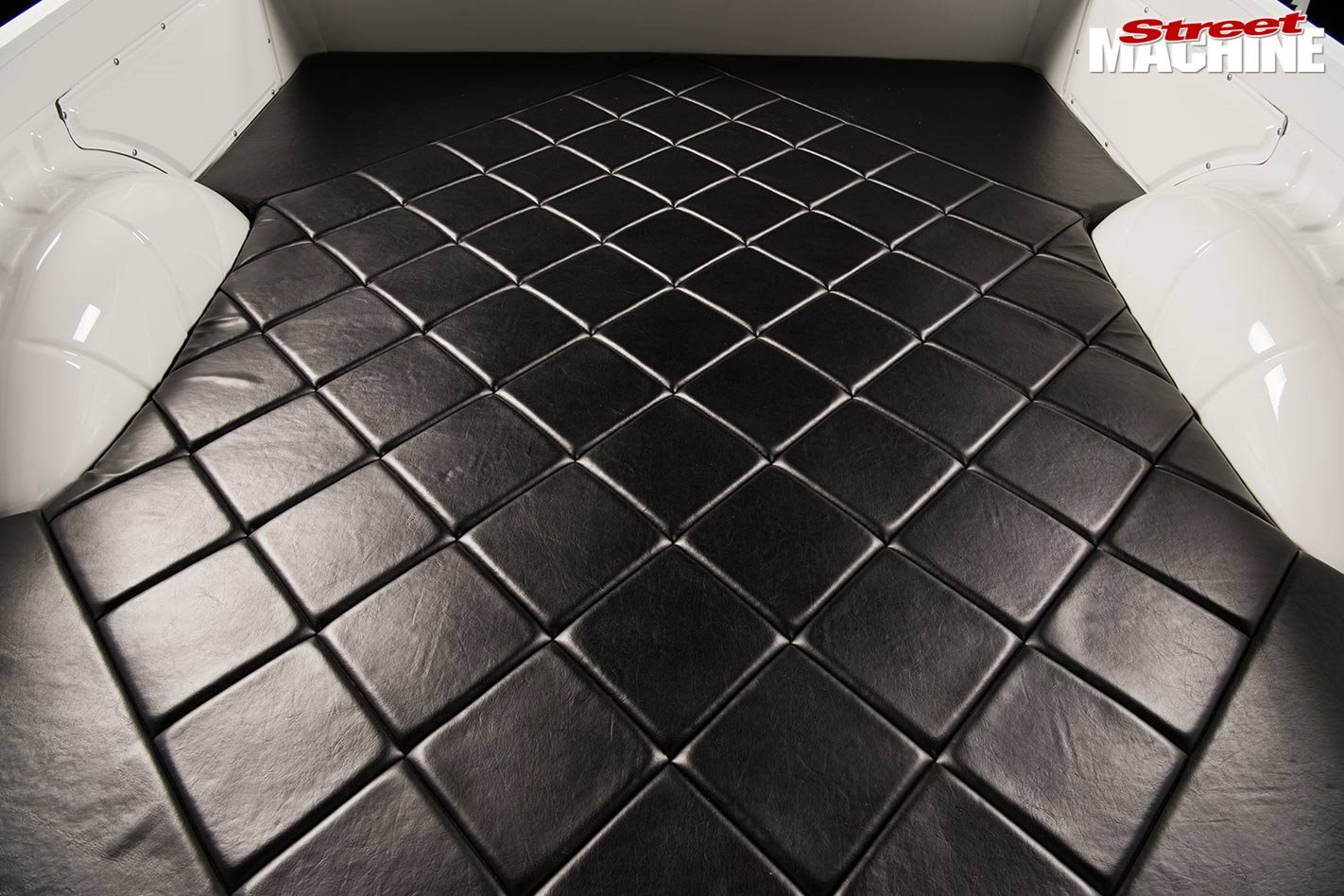 A foam mattress has been cut to fit around the wheel tubs and then trimmed in a diamond-stitch pattern for an interesting feature. Makes it much more comfortable at the drive-in as well!

Even mounting the power steering pump became an exercise in symmetry. There’s an Astra electric power-steering pump mounted under the front guard on the driver’s side, with the reservoir poking through the inner guard in the front corner of the engine bay. To keep the symmetrical theme going, Daniel mounted the radiator overflow bottle on the opposite side. All of that work would have been lost in a satin-black engine bay, so Daniel took the car down to Sam and Cassie Rhodes at Vulcan Panel & Paint to get the firewall and inner guards painted body colour, taking out all of the unnecessary lumps, bumps and holes in the process. 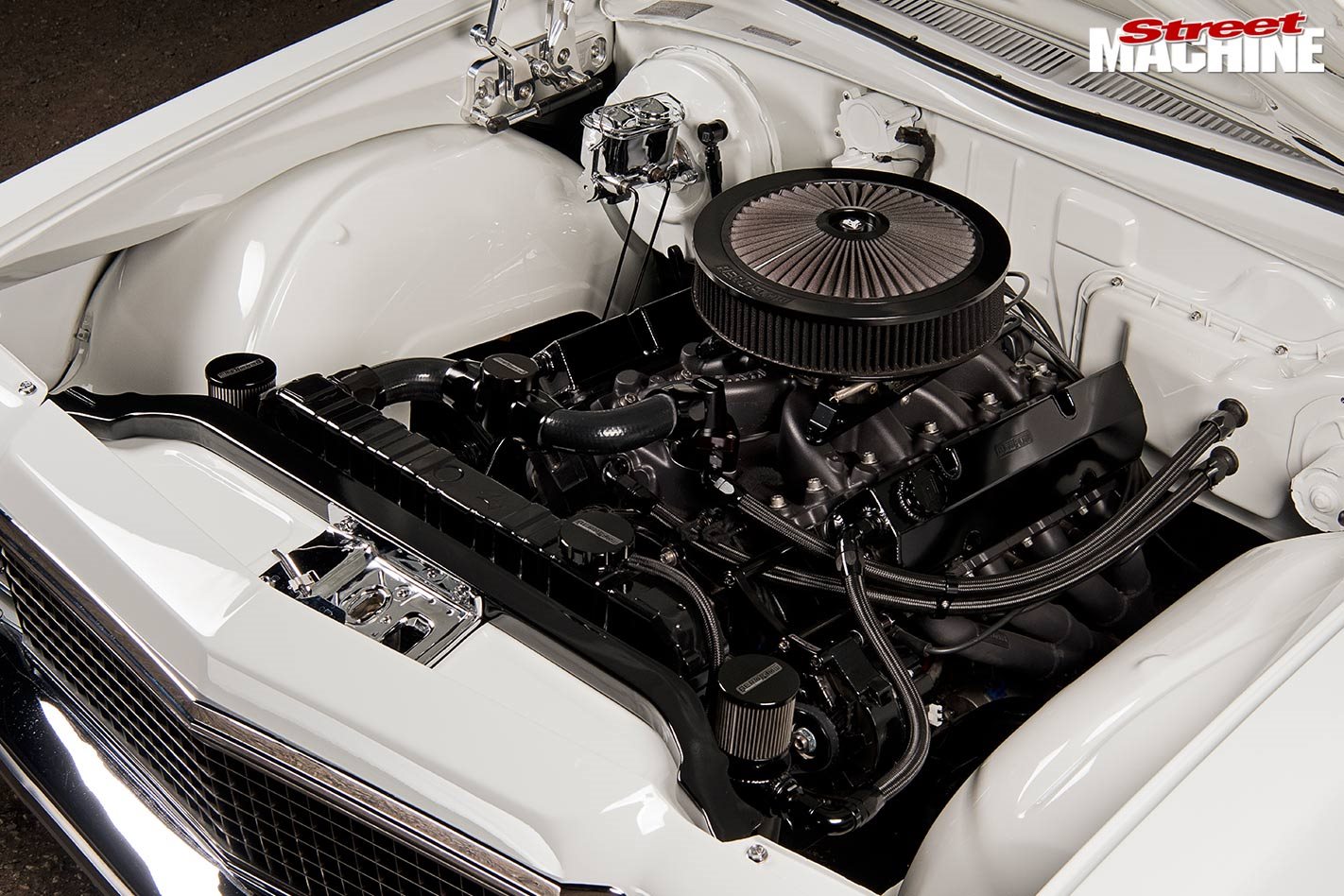 The engine was in the car when Daniel bought it, but it’s a far cry visually from what he started with. Everything that attaches to the engine is black, while anything that mounts to the body is white or polished

Daniel also did a fair bit of work on the interior, which, once again, hasn’t changed dramatically, but it’s a lot neater and cleaner than it used to be. “The seats and carpet were all new, but I’ve ripped the whole dash out and everything is new there,” he says. “I put white dials on the gauges and new lenses and added a RetroSound deck. Under the seat there’s a sub and amp, the speakers are tucked under the dash and the tweeters come out of the vents either side.” 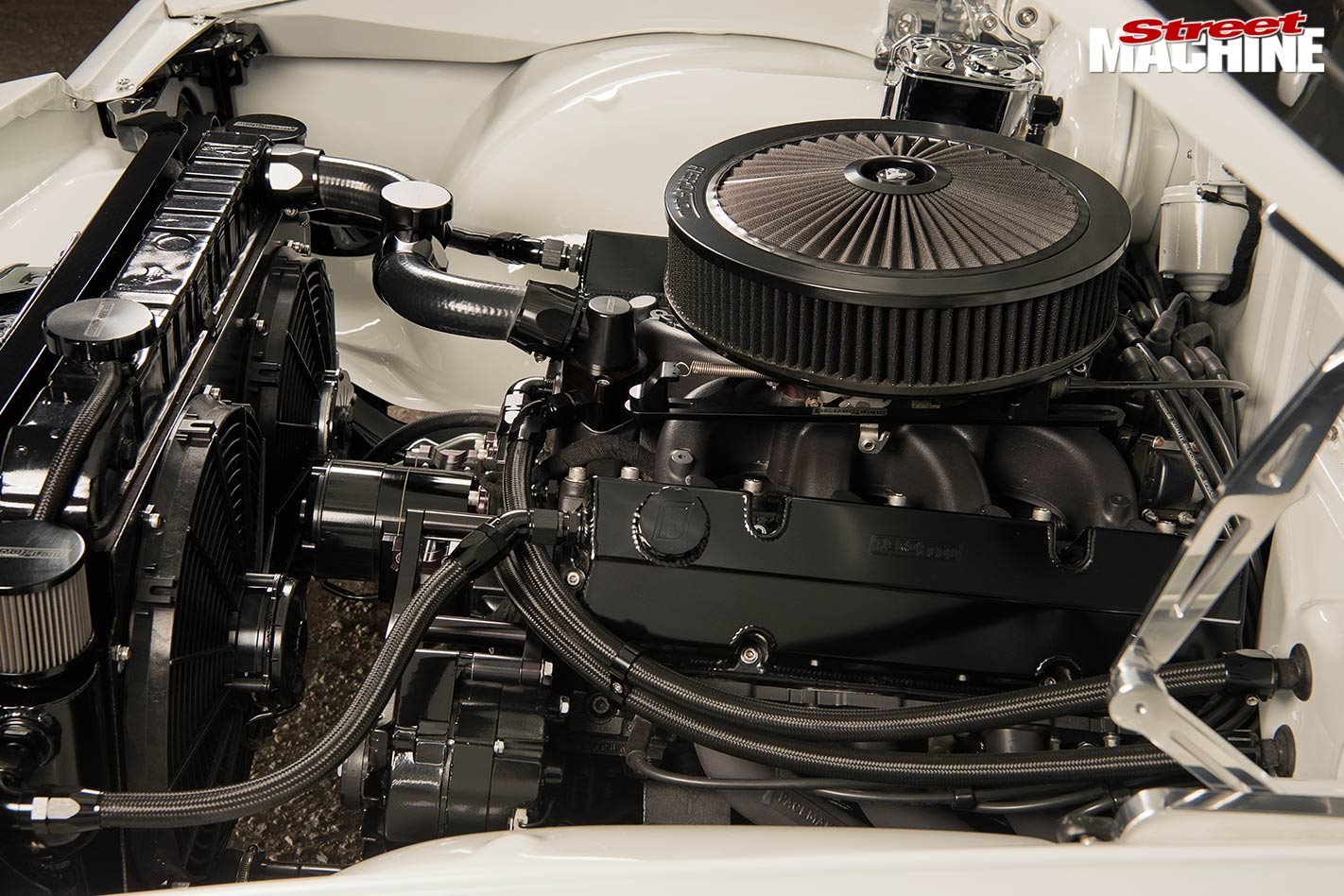 With an electric water pump and electric power-steering from an Astra, the only belt Daniel needs to run is for the alternator

Holden restorers should look away now. The centre console is a genuine GTS one that Daniel cut up to suit: “I got my little Dremel out and cut off the armrest to suit the bench seat,” he says. “It’s registered as a three-seater. I’ve got two girls – a five-year-old and an 11-year-old – so I take them to school sometimes. People ask me if I’m going to put bucket seats in – no way! I’m glad it’s a three-seater.” 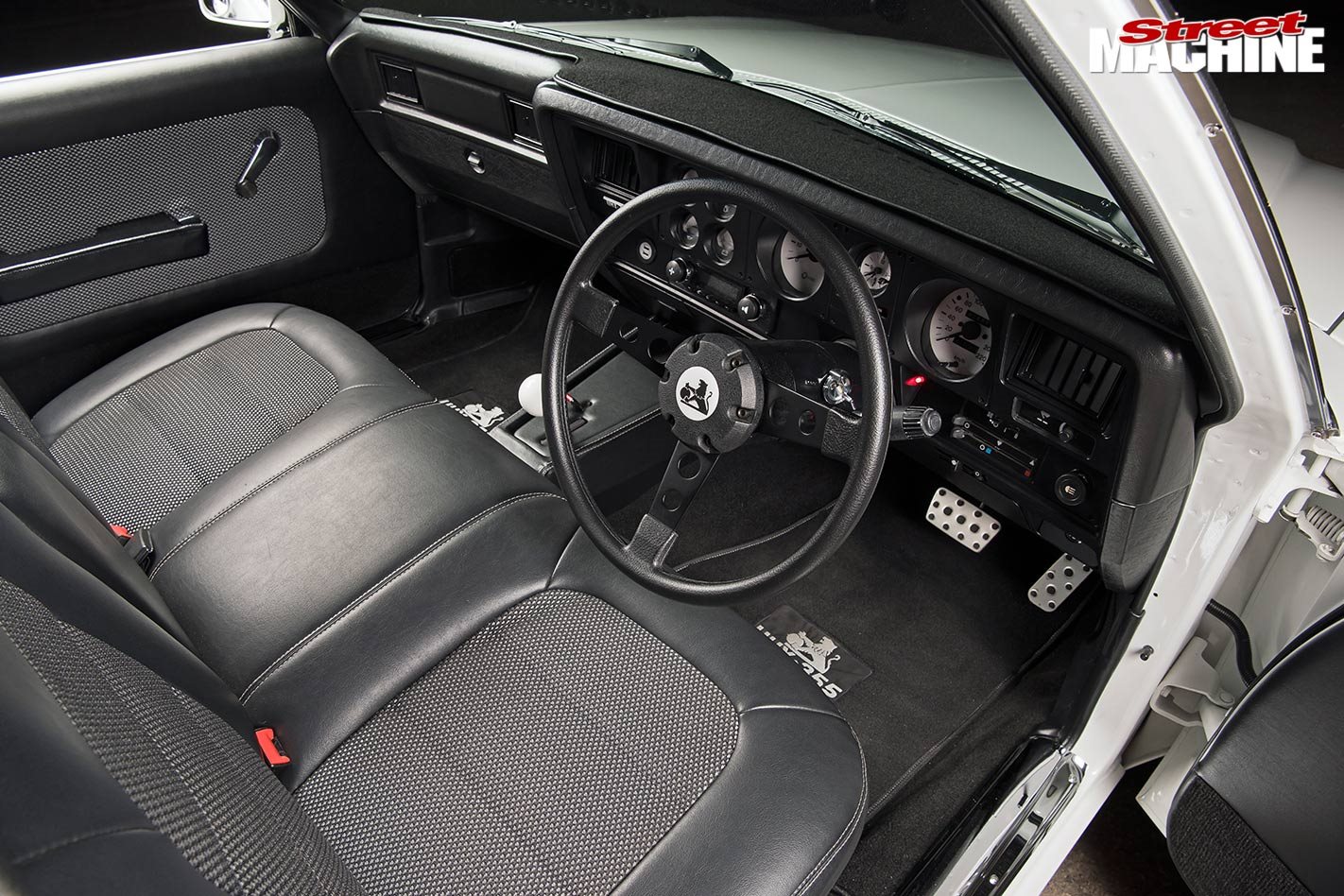 The whole theme of the car, according to Daniel, was to create a 2018 Factory Improved HX Ute, and there’s no doubt he’s improved on every aspect of this car, both mechanically and aesthetically.