JESSE Kalb has undoubtedly been touched by the revhead fairy. At 25, he’s already a master mechanic with a heap of personal builds under his belt, and he attributes it all to his metal-finisher dad, Siegfried ‘Siggy’ Kalb. “I’ve been helping my old man build cars since I could pretty much walk,” he says. “Dad’s always built and had custom cars, American cars and Monaros.” 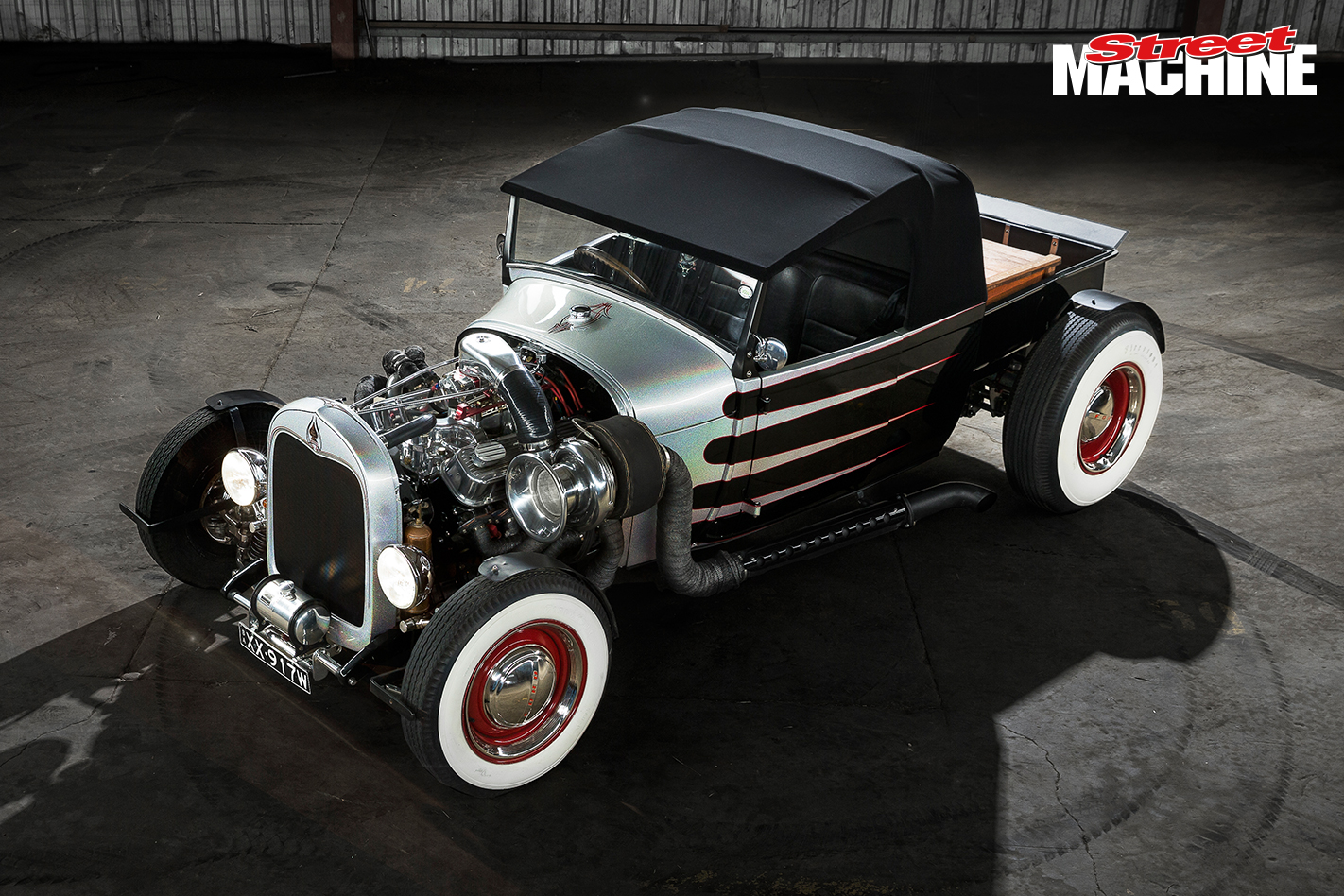 Jesse’s current build is this wild ’29 Ford Model A roadster pick-up. It’s powered by a monster-turboed big-block Chev – as if one of those factors in a short-chassis lightweight car wasn’t enough, he’s added both. And it’s regoed! 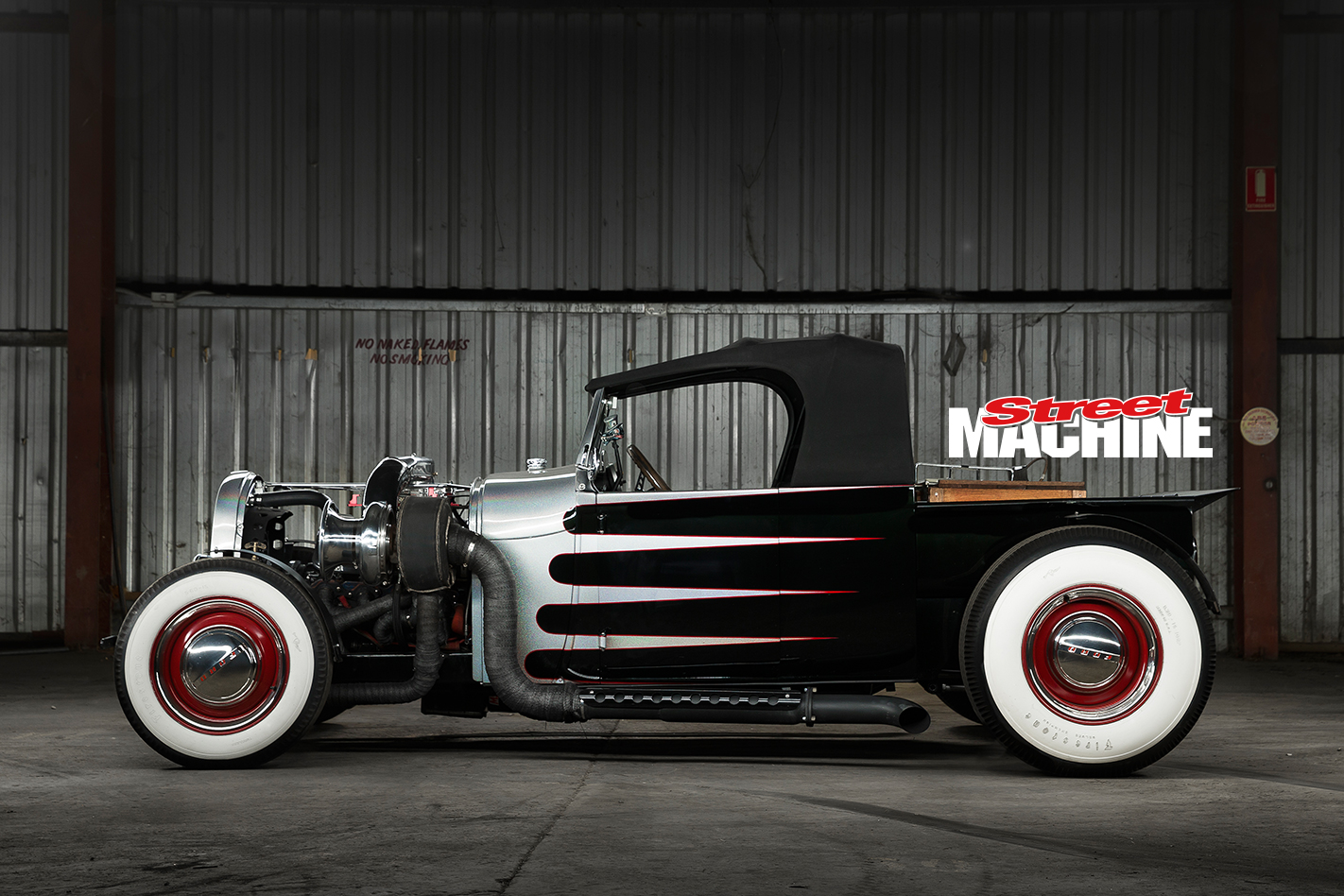 “My dad wanted a hot rod, but then I ended up buying mine, so we built it together, along with my brother Adam,” he says. “I wasn’t after a specific year or model, just anything that appealed to me. I ended up finding this on eBay about four years ago.” The car was in Canberra, so off they headed, towing the unfinished A-model back home to Adelaide. 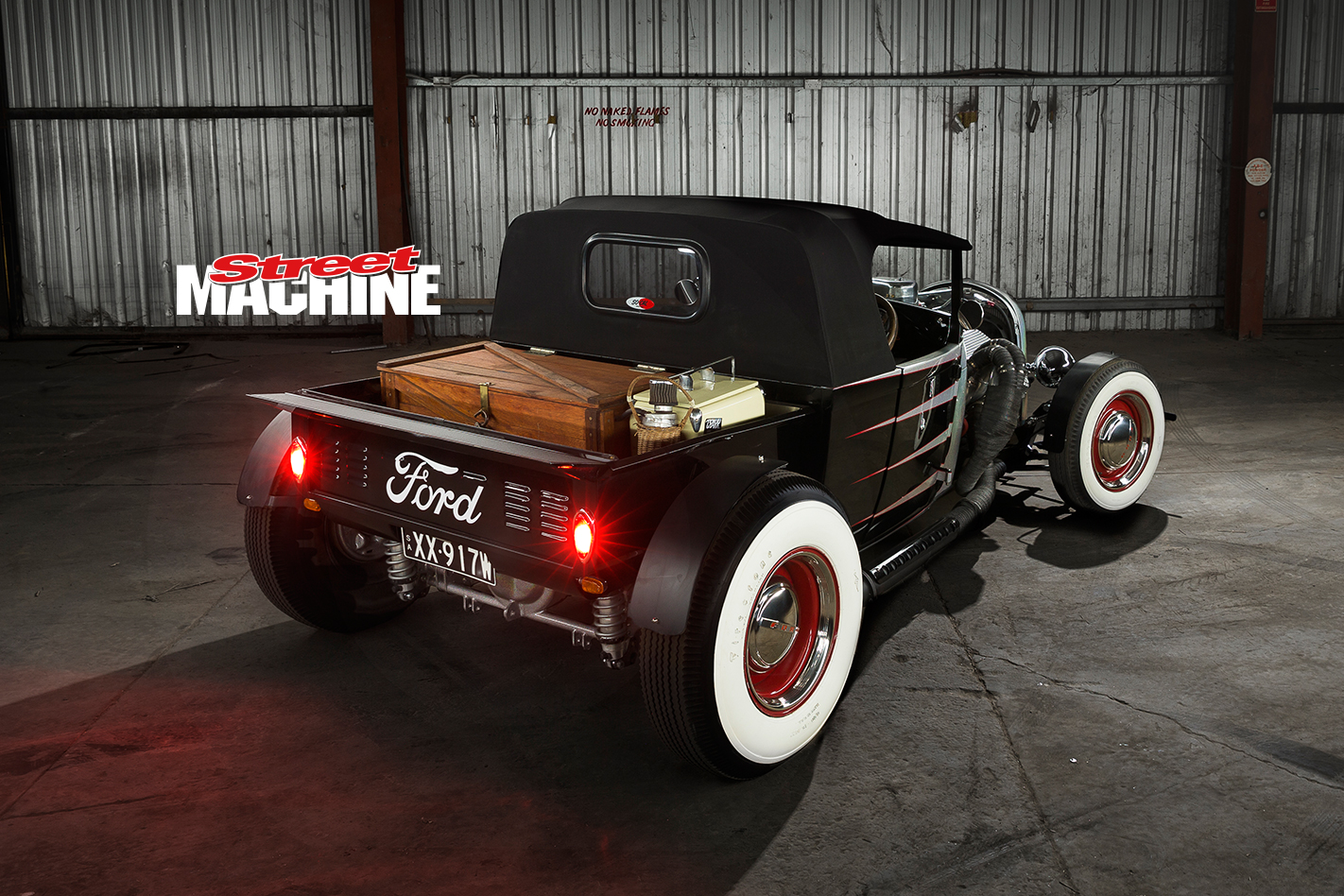 While the purchase was straightforward, Jesse knew what he was getting himself into. “It was quite rough,” he says. “Everything was done half-arsed; the previous builders didn’t really know what they were doing. We had to go over the whole body and chassis again and re-do it. You could say we did it from scratch really.” 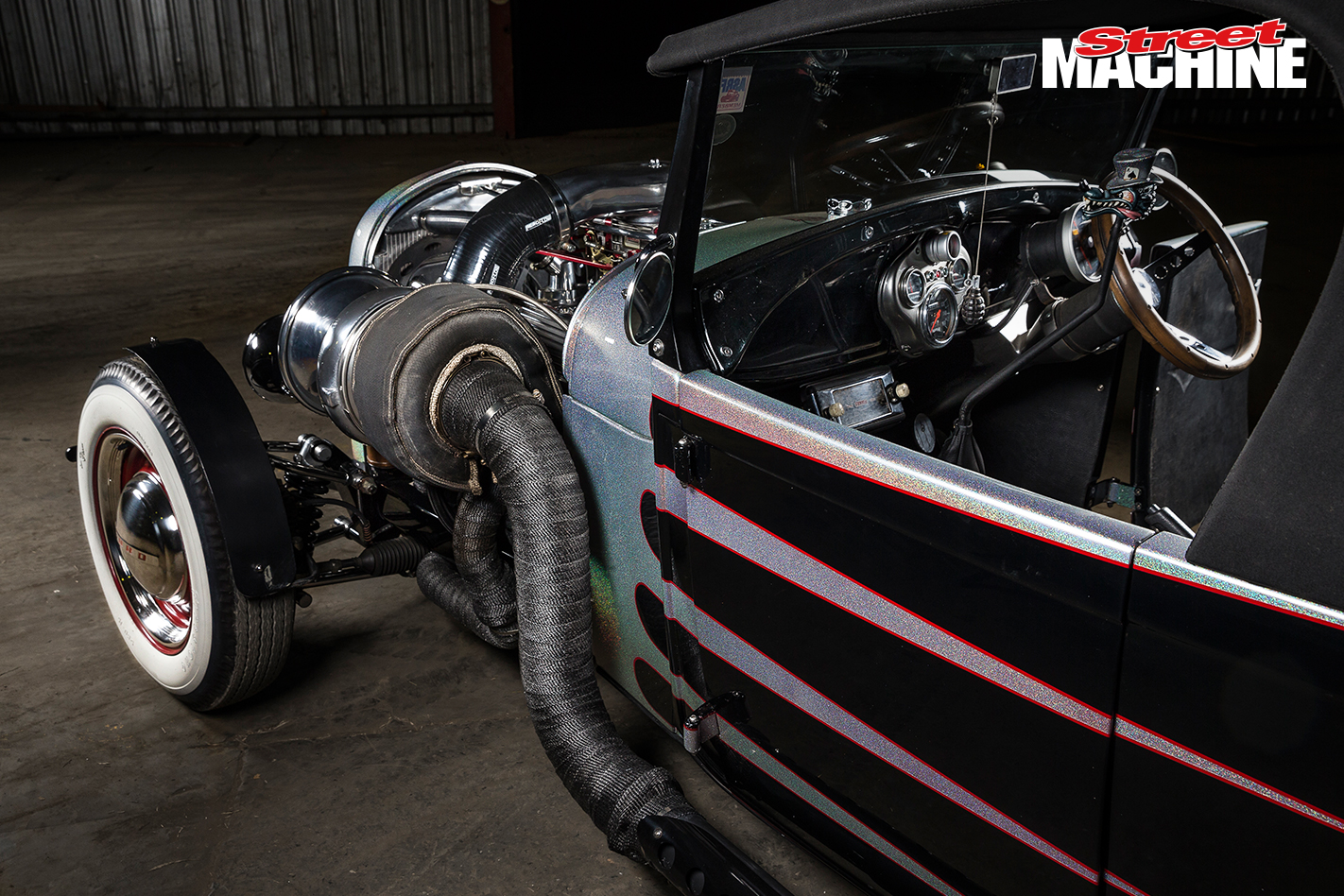 Jesse, Adam and Siggy set about tidying up the mess, and while they were at it, two inches were added to the body, three inches were taken from the roof and it was channelled four inches over the diff. “The Model A is a fairly basic square shape so it wasn’t really that difficult. There wasn’t much to the channel either. We added the two inches to the rear quarter to allow for more cab space. Not that it’s got much!” Jesse laughs. Underneath, they’ve braced the heck out of the chassis and added a tailshaft loop. 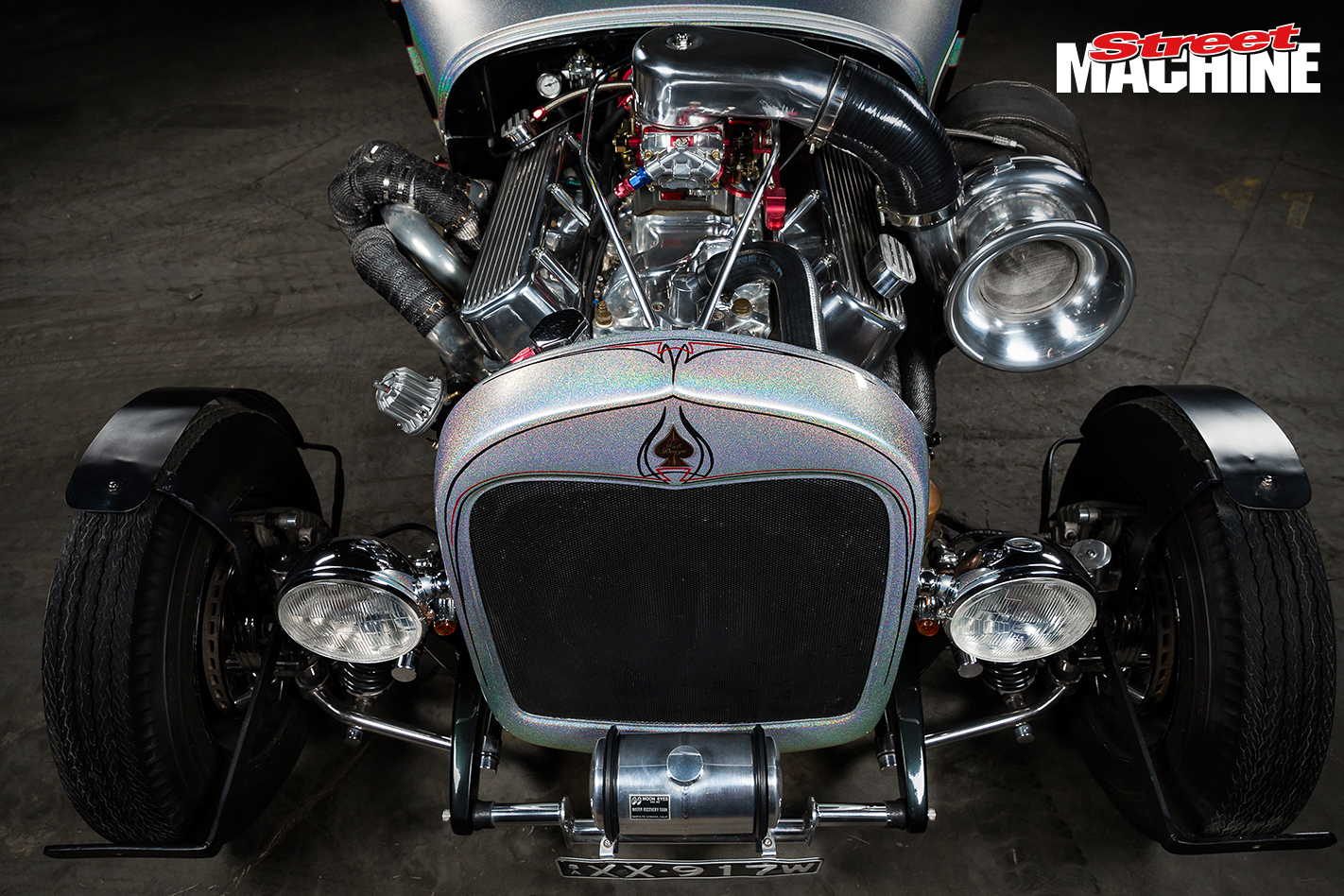 An eye-popping duco was then laid on the fresh body; Jesse is a self-confessed non-conformist, which is clear from his automotive expression. “I like everything I own to stand out. I don’t like to fit in,” he says. So he had mate Travis Birmingham drench the black body in Atomic Green topped with DNA Hologram Flake, finished off with scallops. 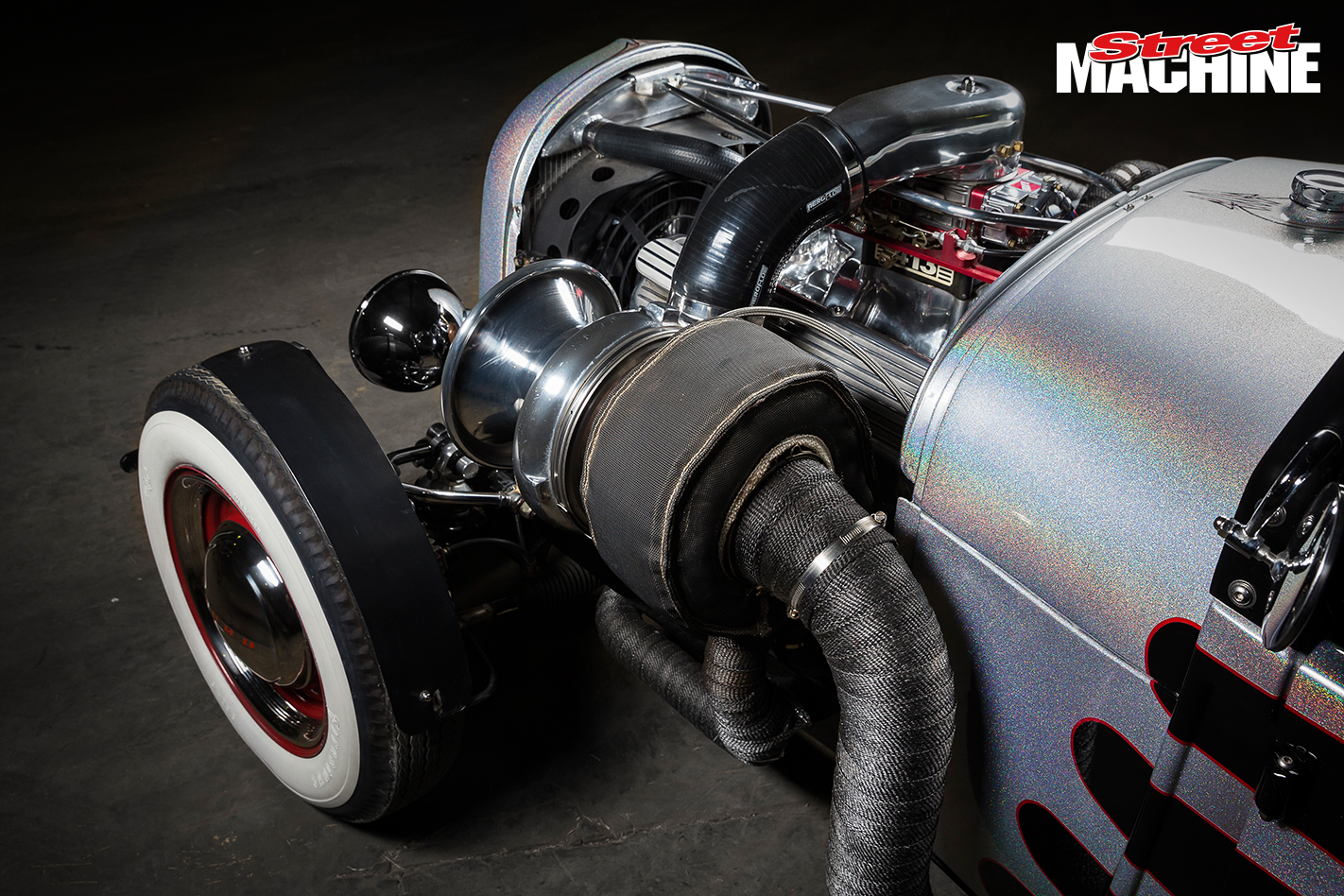 The paint might be out-there, but it’s the cartoonishly mammoth turbo that hits you first. “Everything I’ve built has boost, so the turbo was going to happen no matter what,” Jesse says. “I figure it adds a young touch to an old-style vehicle.” The big-block, on the other hand, was added purely because it was already sitting in the shed. The whole shebang was built by Jesse and Siggy. 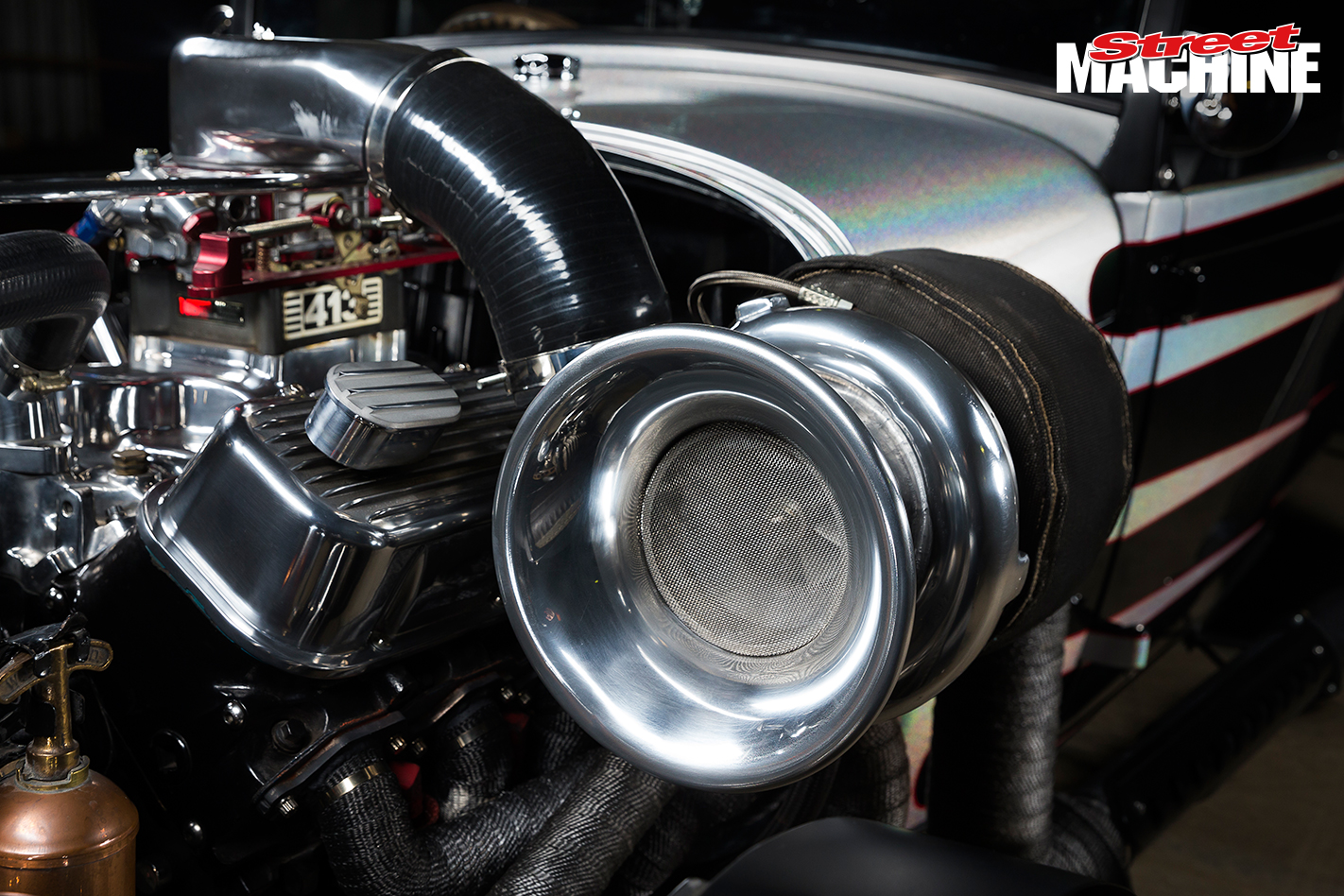 It’s a 106mm Turbonetics Thumper snail that hangs off the stroked 413ci Chev biggy. The forced induction runs through a blow-through set-up, from the turbo through a 3½-inch pipe to Jesse’s custom-made turbo hat mated to the modified Quick Fuel 750DP. This feeds to an Edelbrock mani, ported and polished heads, larger valves and triple valve springs. Opening said valves is a secret-grind bumpstick. Below, JE forged dome pistons swing off Scat rods mated to a Scat crank. A Moroso billet oil pump handles lube duties, with a High Energy sump for added volume. 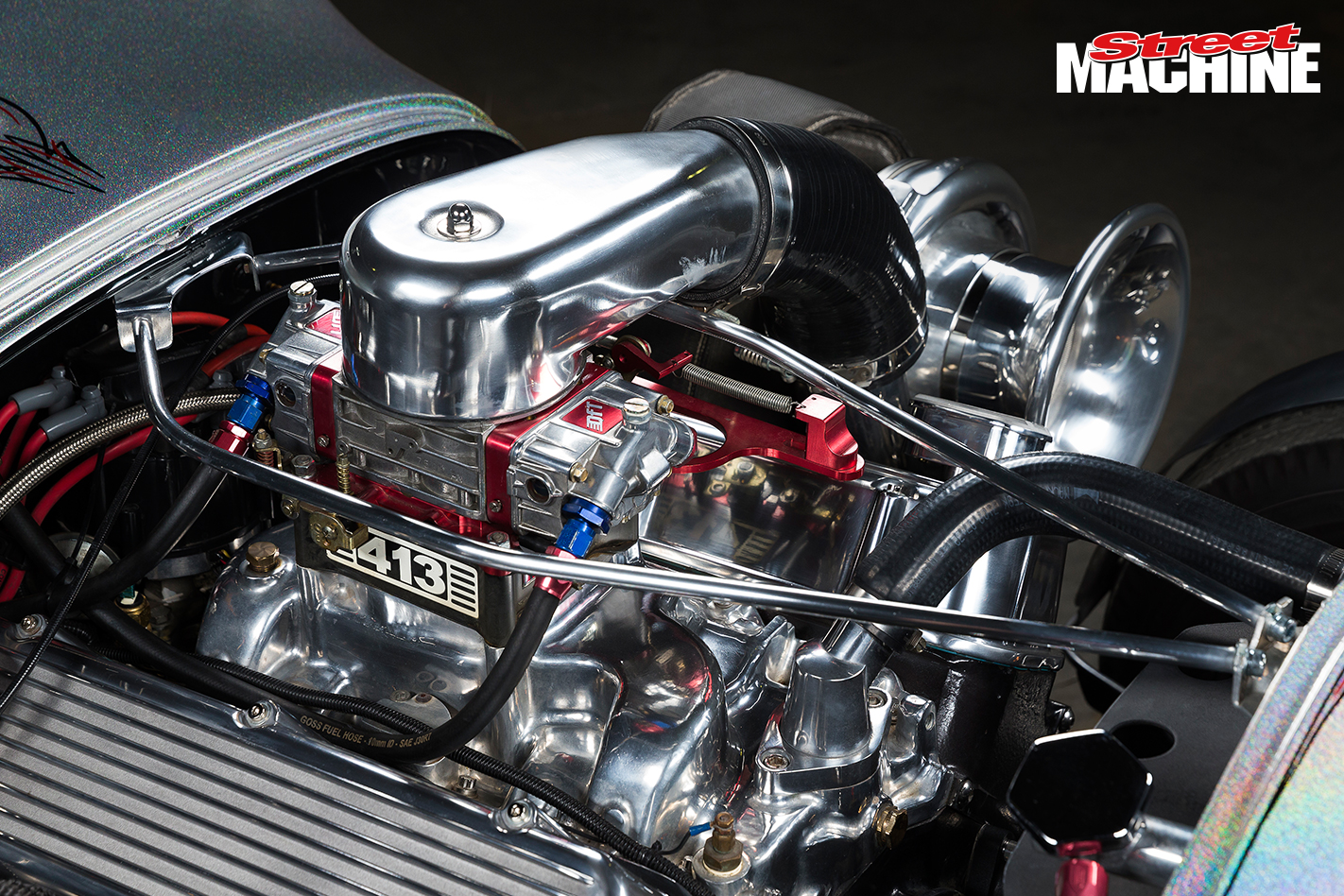 PULP is delivered by an Aeromotive 1000 fuel pump with a rising-rate fuel regulator, while an MSD 6AL-2 – with boost retard – and MSD dizzy create spark. Even though it’s an open-air ’bay, cooling has been upped thanks to a Aussie Desert Cooler three-row radiator with a 12-inch thermo. 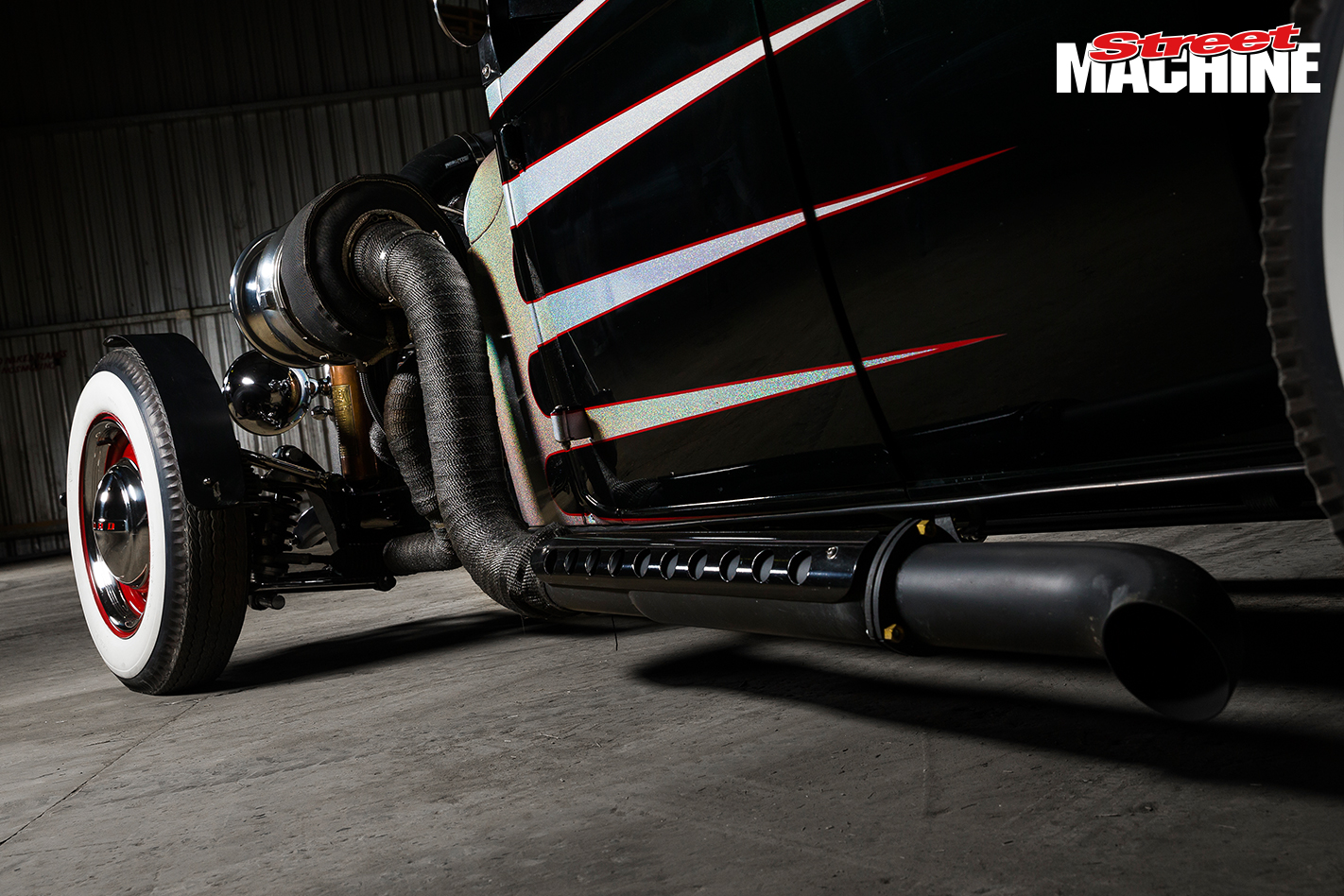 Gasses are expelled via custom homemade turbo headers with a HKS external 50mm wastegate and 2¼-inch primaries to a four-inch dump pipe and out through a 3½-inch exhaust.

A trusty manually shifted Powerglide and TCI 3500 stall converter with transbrake sit behind the behemoth set-up. From there a one-piece four-inch tailshaft is mated to a nine-inch packed with 31-spline axles, 3.9s and an LSD. 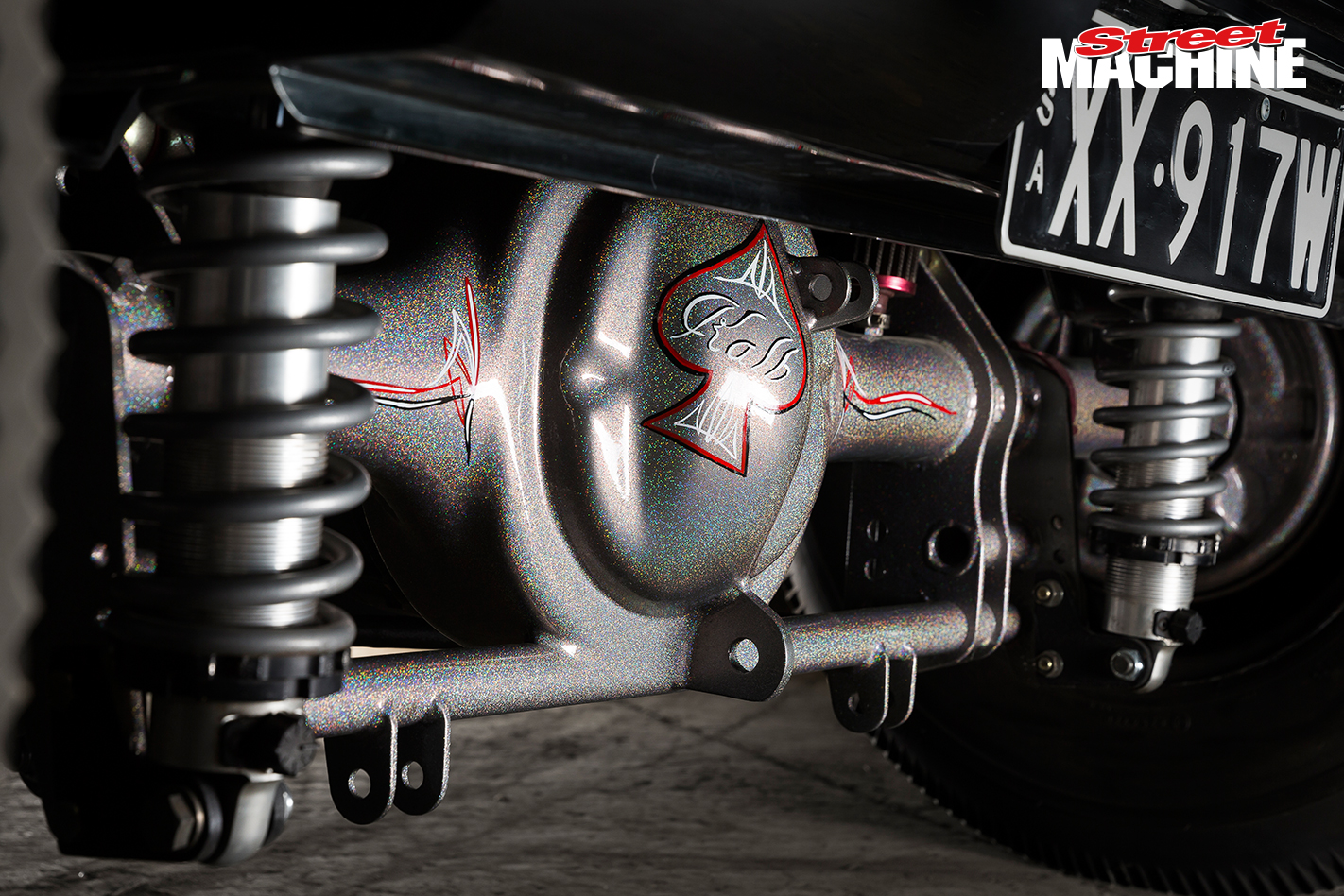 As you’d expect, bounce and stop have been upped to match. At the pointy end is a Rod City Chassis independent front with Aldan American coil-overs, while QA1 coil-overs and a custom four-link with Panhard bar take up the rear. Pulling the rod up are PBR VN Commodore discs and calipers up front and Ford drums at the rear. They’re wearing understated 15-inch Antique Tyre smoothies shod in Firestone hoops. 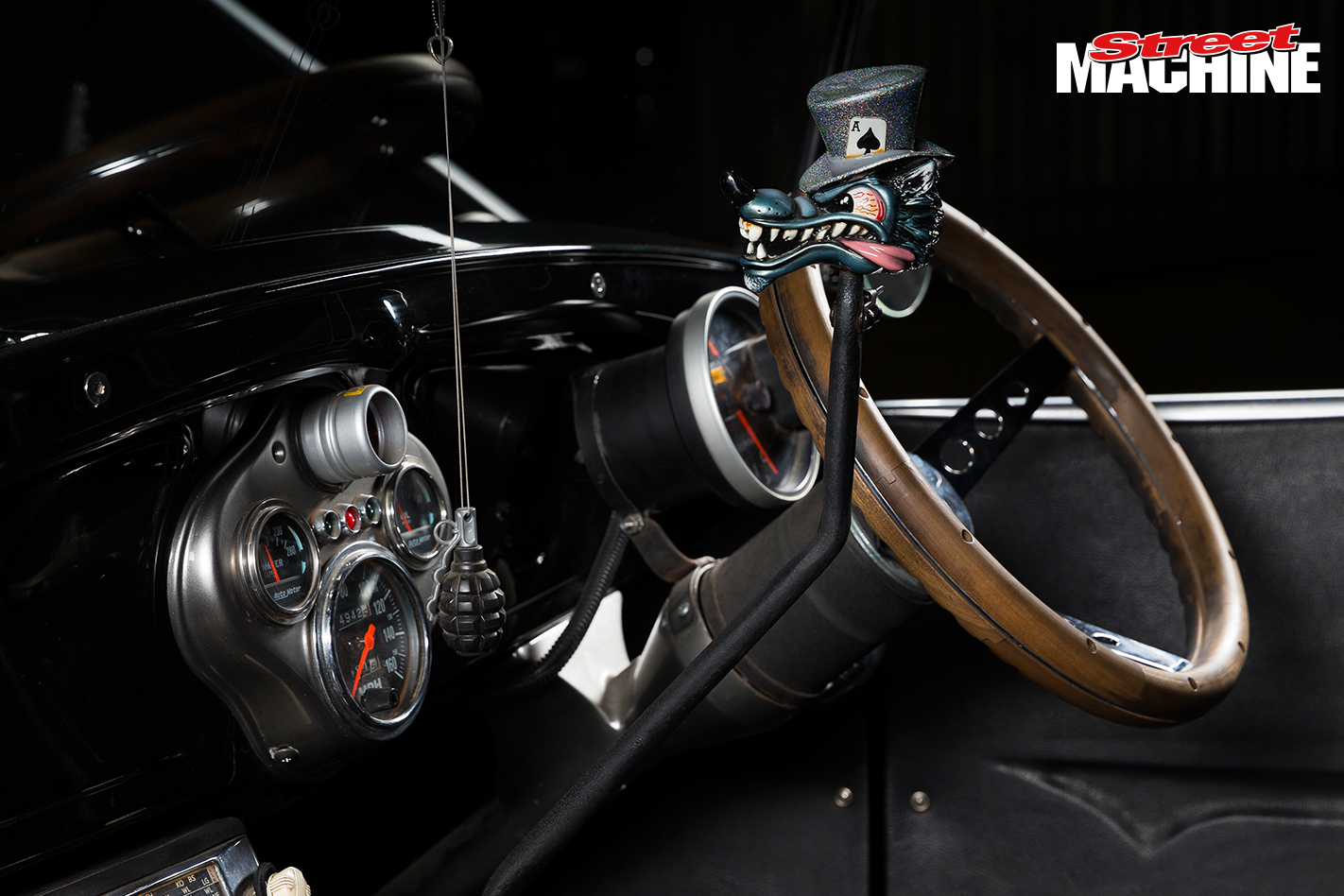 Jesse chose a modest interior; practical black-on-black doesn’t detract from the festivities up front or the sparkling duco. When Jesse’s not steering by throttle, a wooden Mooneyes tiller does the job. Cogs are swapped with a chopped TCI race shifter on a ’31 truck stick, while four-point harnesses strap him in. Auto Meter gauges have been added to the original ’29 cluster to keep an eye on all the vitals. The fellas also made a removable full ’cage which is both CAMS- and ANDRA-approved. 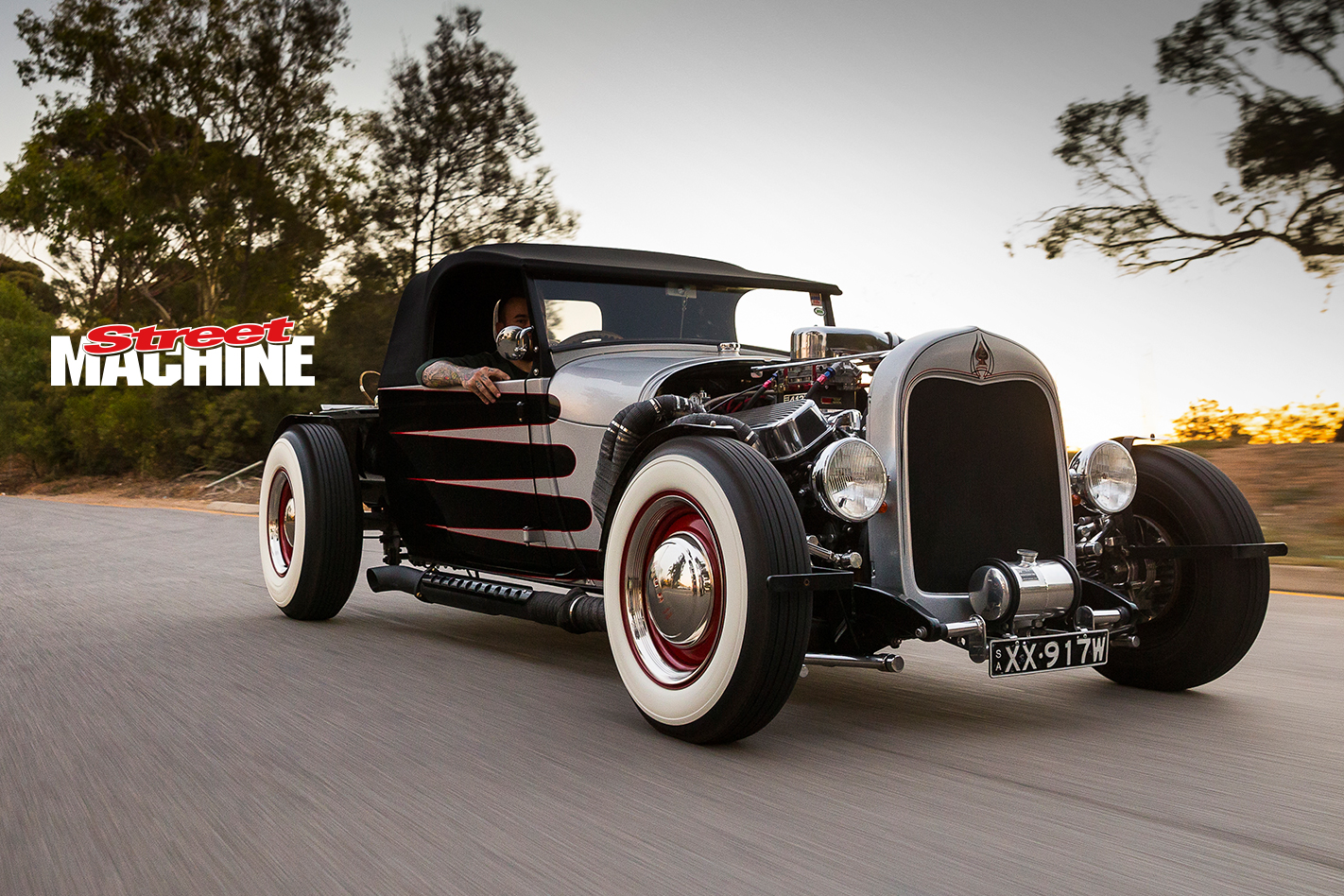 Keeping with that theme, wheelie bar and parachute mounts have been added at the rear. “I’ve ran a 10-second quarter at AIR before the turbo, and I haven’t ran it since,” Jesse says. 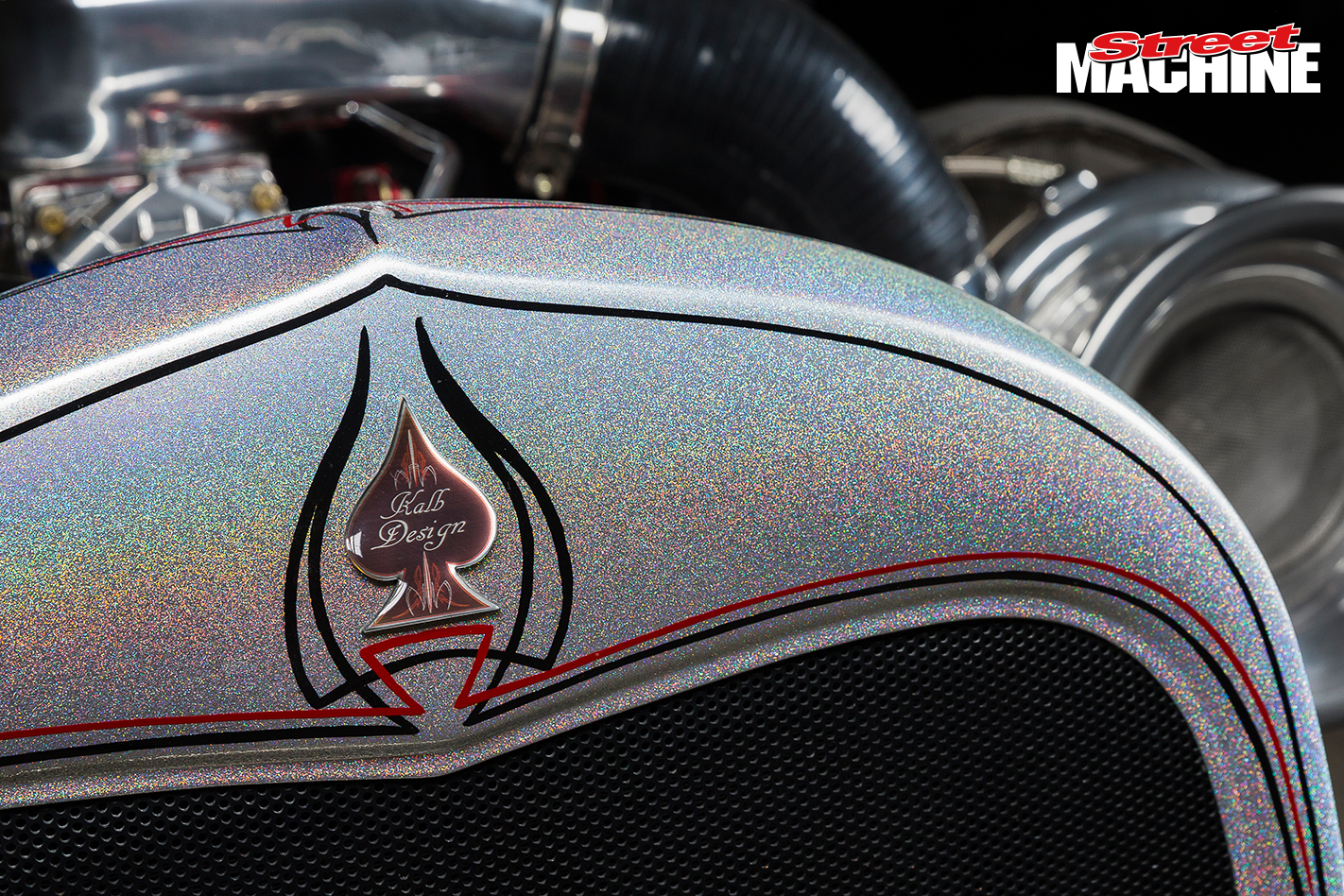 “I wouldn’t mind racing it now, but I’ll cruise it a bit more first. She is street-driven every day; you know, go to the shops to get milk and bread, or go to the hardware store – anything,” he laughs. 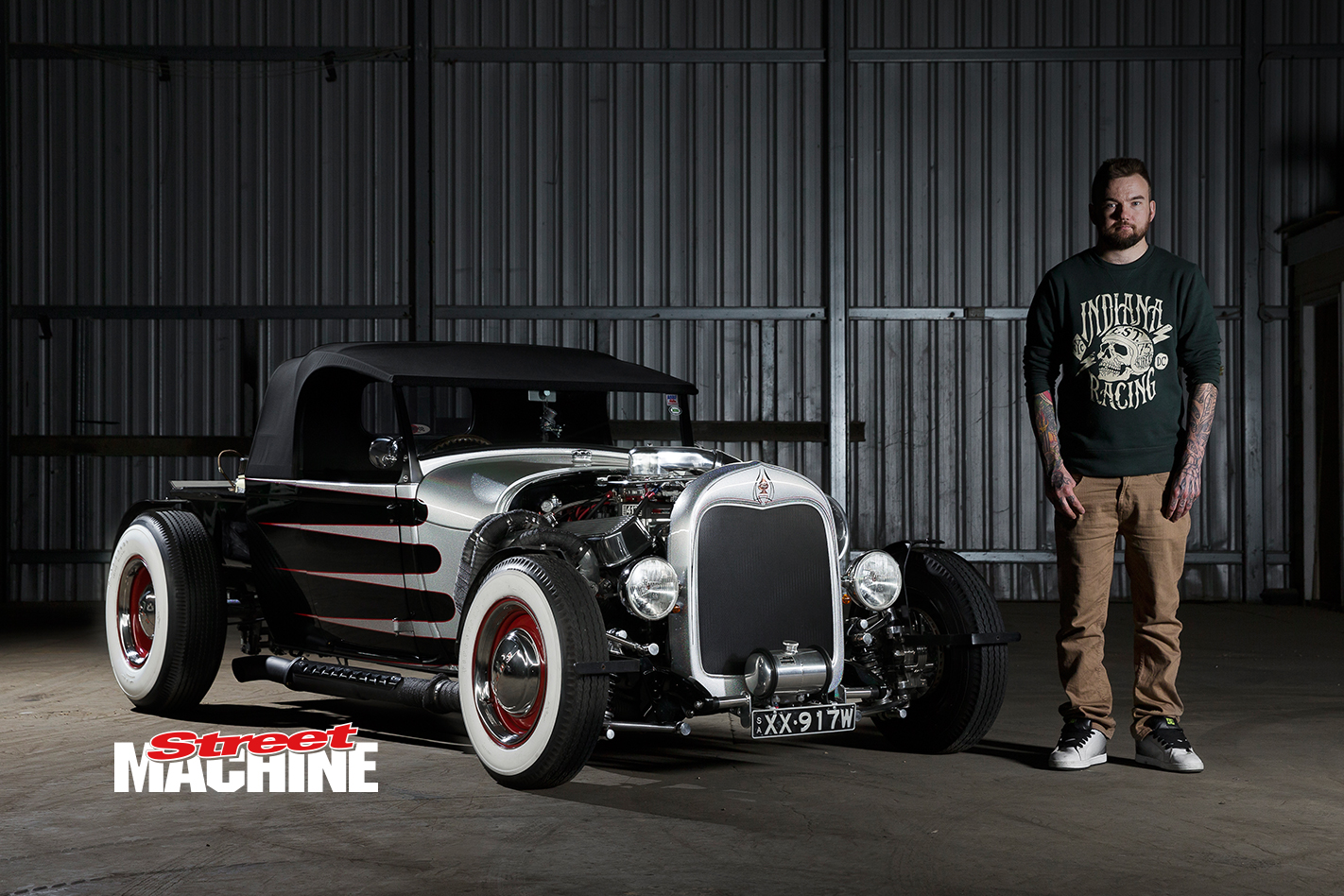 “Though, it’s never done. I change my mind every month. I’m now making a pick-up hardtop for it out of tudor rear-quarters. It’s got an aggressive chop and a sun-visor on the front,” says Jesse. “I like to stand out, so I am always building random vehicles. Anything that pushes the limits! Look me up on Instagram @kalbdesign.” Do it! 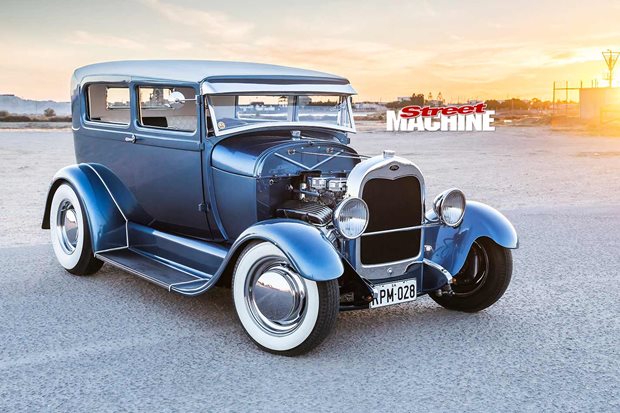 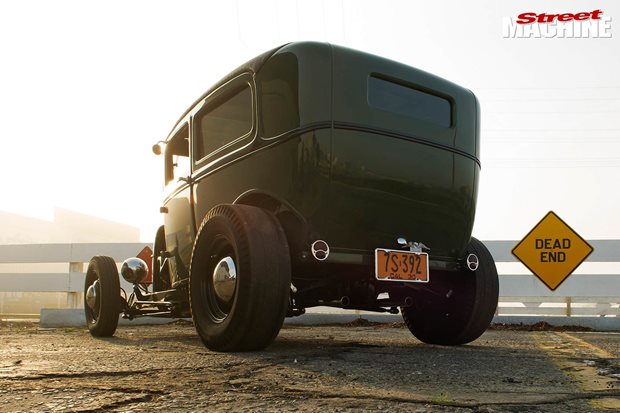