IF YOU’RE out for a cruise along Queensland’s Bruce Highway between Cooroy and Gympie, at a spot called Kybong you’ll come across Matilda the kangaroo, the iconic mechanical star of the 1982 Brisbane Commonwealth Games. You can’t miss old Matilda; she is 13m tall, after all. But not too far down the road from winking Matilda there’s another sight that’s hard to miss: a schmick lime-green ’32 Ford sitting all a-glimmer on a roof. Whoa, better pull over and have a peek. Then it makes sense – the sharp ’32 sits above Hell Town Hotrods, home to rodder Adam Martin and his team.

9
On the forecourt is one of Adam’s barn-find daily drivers, a ’55 DeSoto Diplomat complete with signage and a skeleton on the parcel shelf. It’s pretty much original, still with the old flat-six, but now has Falcon disc brakes on the rear

“The ’32 is a fibreglass body we made here on site. It’s just for display, but we made it and hoisted it up there,” Adam says. As an eye-catcher, it works a treat.

Adam and partner Teana bought this former antique shop at Kybong about two years ago and set up their rod fabrication business. But the place also has a diner and shop filled with cool motoring memorabilia. Outside is an old-style garage complete with huge Caltex star, Mobil Pegasus logo, vintage petrol bowsers and an array of cool rods and mean barn-finds. Adam has been working with rods since, well, forever. He tells me how it all began: “I’ve lived on the Sunshine Coast most of my life, and I started mucking around with pushbikes when I was at school. I had a bunch of mates and we’d scrounge around for bits and customise our bikes, paint ’em up and make ’em look snazzy.” After he finished school, the pushbikes were replaced by motorbikes, then hot rods.

“In those days,” he says, “there was never any money so you just learned to do everything yourself.” He did get trades though; he has boilermaker and coachbuilder qualifications, and can turn his hand to most things. He has even played with rotaries.

Many of the hotties on display are Adam’s own projects, things he found that he loved so much he just had to get them home to play with. But Hell Town Hotrods is a serious workshop with customers coming from miles around to have their cool rides built here.

9
Shane Gambling, one of Hell Town’s metal guys, is working on an XP van that came all the way from Townsville. In the background is an XY being readied for paint, while the old split-screen Kombi is getting a full back-to-metal rebuild

Take the gleaming iridescent green ’27 Model T sitting outside on the forecourt, for example. “We built the bucket to a customer’s specs,” Adam says. “We have all the body moulds here and made it on site. The customer had a clear idea of what he wanted. It’s a real beauty! It runs a 5.0-litre Windsor through an FMX transmission into a Jag rear end.” 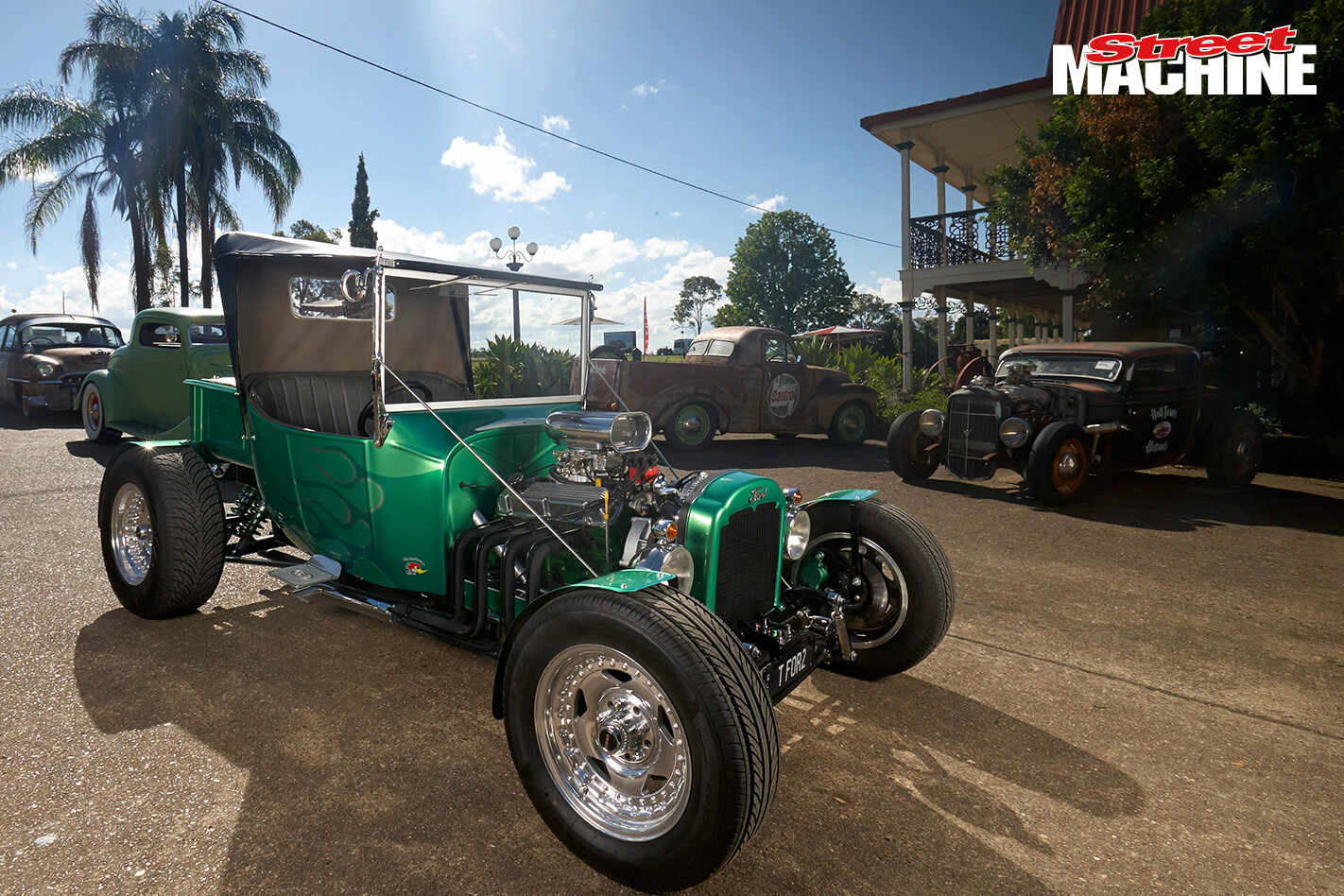 Beside the T-bucket there’s an old Austin A40 ute and ratty ’32 with Hell Town signwriting, both looking as if they have been dragged from 50 years of shed-minding duty. But they’re both runners and put in regular appearances at local shows.

A newish shed down the back has given Adam a lot more work space, and it’s here that the real magic happens, with the guys on the tools, Shane Gambling and Tony Butler, preparing the panels and finished metalwork for ace painter Darren Gilroy.

9
Old petrol bowsers are big favourites for Adam. Whether restored or with original patina, they make any shed look cool

“It’s great to have these local guys,” Adam says. “When Tony arrived he was stoked with the quality of our tools. He reckoned he had to work with a hammer and anvil at his old place. And we’ve even had to put on an apprentice – Tony’s son Jordan.”

9
This Nash is a rare right-hooker but looks as if it’s had some surgery. The Hell Town Hotrods guys added a Torana front end and a BorgWarner rear, and it runs a 5.0-litre Windsor to help it part the scenery

The diner is an Aladdin’s cave of cool stuff. There is a 2.6m-tall metal statue of comic-book character Hellboy, all made from motorbike chains, pistons, gears, sprockets, uni joints and the like. You don’t want to bump into this jigger on a dark night! The walls of the shop are covered with old advertising hoardings, including some repro Mobil signs. Amongst the collectable motorbikes, old toys and restored petrol bowsers are racks of hot rod-styled T-shirts and motoring gear. There are also frocks, bags and other goodies for lady co-drivers.

Next time you’re on a cruise up Gympie way and need a break, glide past Matilda and then look out for the green rooftop rod. A visit to Hell Town Hotrods is sure to leave you inspired and refreshed – and your wallet sorely tempted. Check out the Hell Town Hotrods Facebook page for more info. 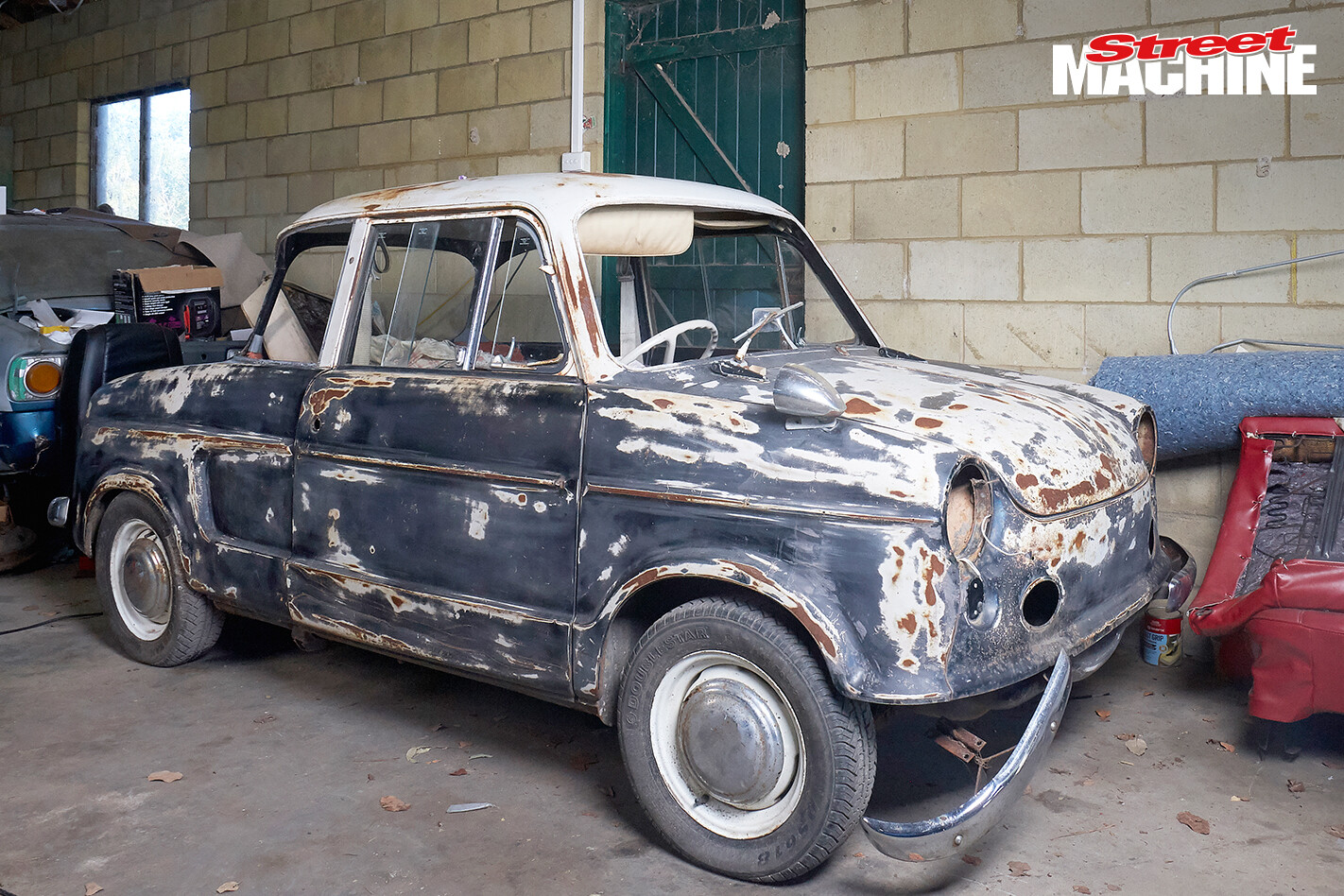 Among the more original vehicles waiting their turn is an old NSU Prinz, which will be fully restored. Fortunately there is a spare body and some extra parts in the paddock 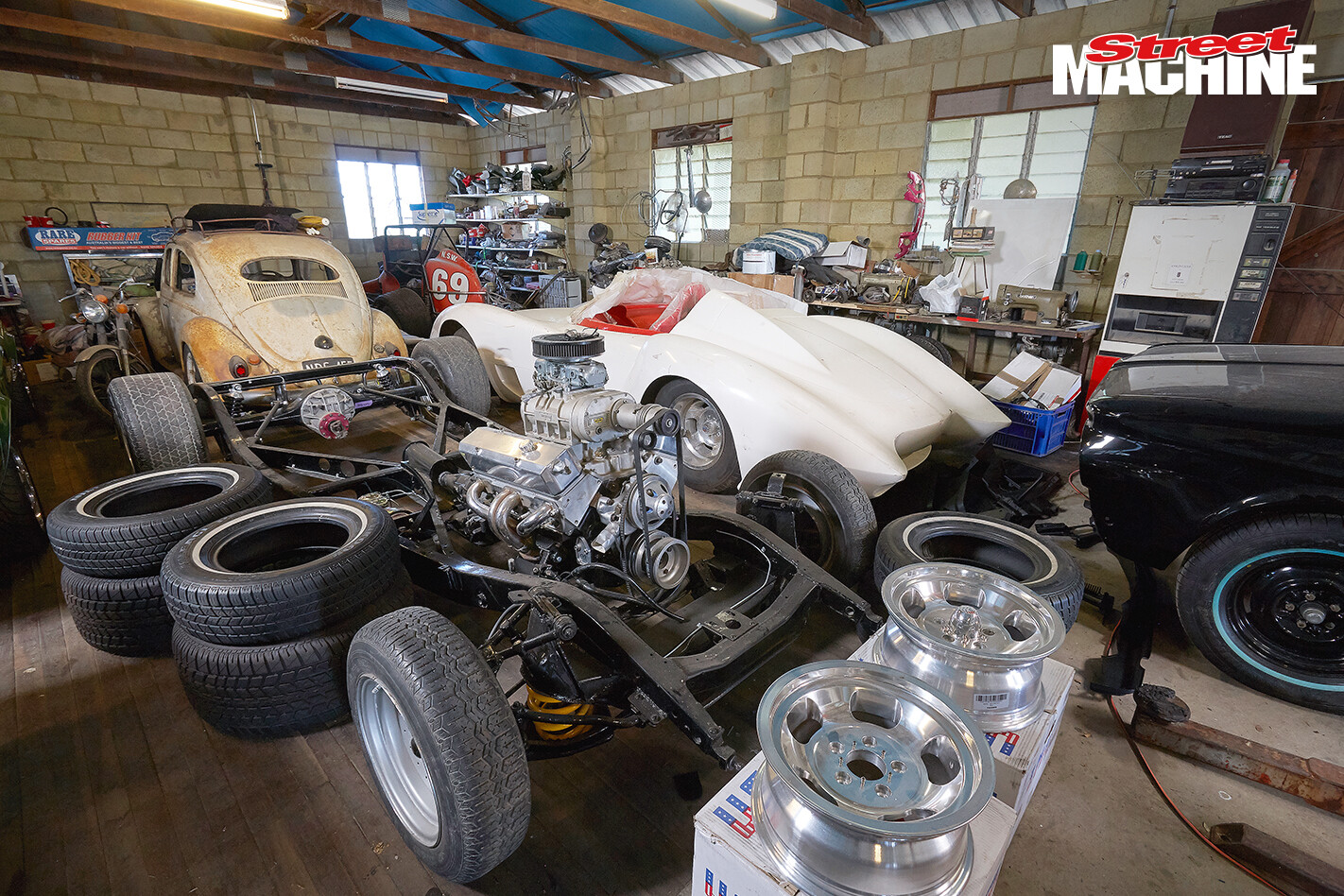 This full-size fibreglass model, which Adam picked up from a Gold Coast film studio, is called the ‘Mock 5’, named for its strong resemblance to the famous Mach 5 that features in the classic 60s Japanese cartoon series Speed Racer

9
ADAM’S skills are in evidence in his old Morris J van, found in the bush near Gympie. Originally a local bakery van, it ended its working life carting old house stumps, and finally had been cut up with an axe and left in a gully (see photo above).