ON TASMANIA’s wild north-west coast, at the end of a lonely runway there stands a shed. A modern tilt-up, it looks strictly business from the outside – a signwriting business, to be exact. But something’s afoot; lined up on the forecourt are nine tidy chrome-bumpered streeters.

7
Dave had the usual suspects over for some frothies when we rocked up to shoot the shed, although something tells us they were tipped off to bring the cool cars out for the night!

Photographer Nathan and I pull up as the sun sets behind the shed. The bay door is open and a warm glow emanates from inside, along with foot-tapping, bass-slapping rockabilly beats. Welcome to Dave Mason’s world. Dave greets us, slaps a Jack Daniel’s into each of our hands and brings us inside to meet the mates. Introductions are flying, but I’m lucky I won’t be tested on this; I’m too distracted by the signs. They’re everywhere; enamel signs, tin signs, neon signs from every era and vintage. Original, restored, new, old. Dave is a signwriter by trade, and an automotive artist by passion. 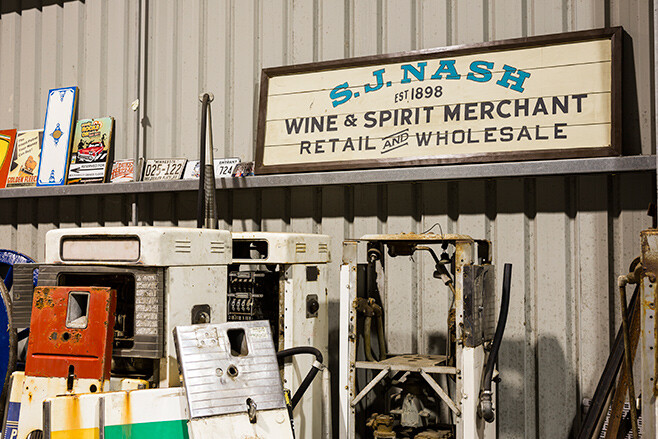 7
Kitty Martini & The Tom Collins Trio, fresh from the Shepparton Shakeout. Our man Dave provides backing vocals, with Scott Mainwaring on guitar, Dave Runciman on double bass and Kitty herself on lead vocals

Timing is everything. Dave was just old enough to have started his signwriting apprenticeship as the last of the old-school were winding up, and established Mason’s Sign Worx in 2004 to cater to the corporate community – regular punters needing signage for their transport trucks or floristry businesses. But as the DKV – Department of Kool Vehicles – Dave and his team of signwriters and fabricators also offer automotive art, memorabilia, restoration and customisation. Steady of hand and steely of mind, Dave will attack your Esky as readily as your Harley, expertly applying pinstriping, airbrushing and flame jobs that reflect each customer’s personality and passions. 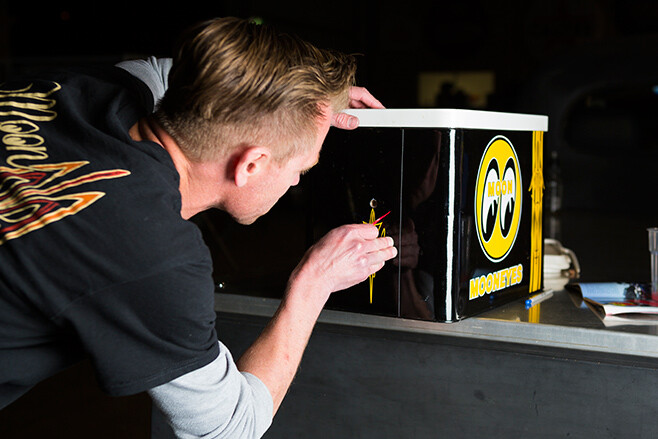 “Doing these is how I keep my hand in the traditional stuff,” Dave explains, gesturing to a black Mooneyes-themed Esky he’s been working on. “Vinyl was first coming in when I started my apprenticeship back in the mid-90s. The business has changed so much since then.” 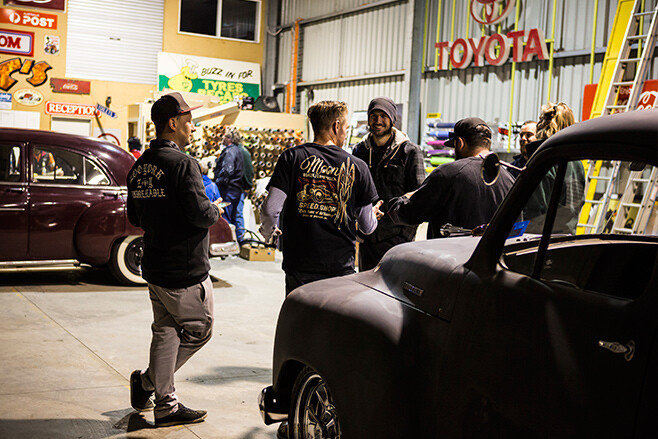 One wall of the shed sports a fairly sizeable – and not very hot-roddy – Toyota sign, retired from a local dealership. Dave looks at it while sipping his Jack, bathed in soft red neon. “I’m going to move that soon; I’ve got Andy Morris’s shop sign to go up there.” 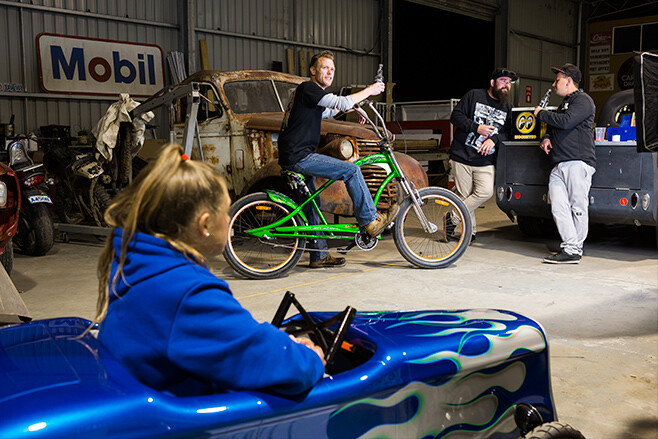 I detect a lump forming in his throat, and sense from his change in demeanour that Andy Morris, a gifted local hot rodder and fabricator who passed away last year, was more than a casual acquaintance. “He taught me a lot, man; I owe him a lot,” Dave confirms. Morris was a legendary figure among the rodding fraternity around these parts; I notice the chatter has stopped amongst the other fellas; you can hear a pin drop. 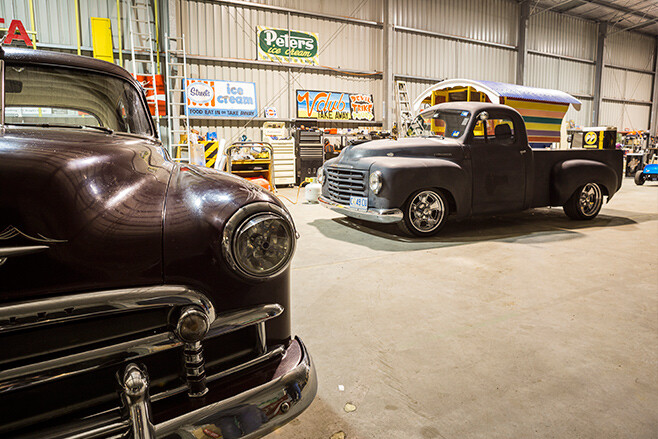 “I’d be hanging around Morris’s shop as a 17-year-old kid and he would mend something and I would ask him how he did it. And you had to listen pretty carefully as he’d only ever tell you once!” The other boys have a chuckle. “Andy was right into the engineering side of things; he’d say: ‘Don’t tell me it can’t be done.’ He was very inspirational; he was like a grandfather to me, to be honest. He wasn’t scared to tell me off when I was being a clown. He was quick to say: ‘Yeah, that’s pretty cool,’ or: ‘Nah, that’s not what I would do; here’s what I would do.’”

7
Dave's love of memorabilia extends to a sweet oil tin collection. The tins are a connection to his past but says it's also the love of signs that draws him to them

Dave clears his throat. “Different people have taken a lot of time to invest in me; as far as that sort of thing goes, I want to give back as much as I’ve been given. And one of the biggest things I’ve found is that when you see someone with a talent, you help them nurture it.” He waves broadly at the workshop’s office wall – covered in signs, naturally – and continues: “To own a business; to actually employ people and help people who really enjoy our culture. I’ve got a couple of young lads who come in; we have a few beers and talk about all sorts of things and I show them some tricks.

7
Dave's 1948 Studebaker 2R5 was an apple truck before being retired. It needed a new firewall, floor and even a repo chasis. The donk came from an HSV-enhanced VQ Statesman and Dave says it has wicked horsepower. "The best I've ever done is a 13.4, and it's a daily-driven thing"

“When you’re working on a car, it’s about mateship; the very last thing you talk about is the project at hand once you’ve got a plan. And that’s good for men’s mental health. It allows you to say: ‘You know what? I’m glad you’re sharing this and we can work through it.’ There’s no shame in asking someone older and wiser than you for advice. Most people are happy to share their knowledge if they know it’s going to good use.”

7
Although it looks like Mater's grandfather and has patina from here to eternity, this '39 Chev truck has been sold to make way for something special

We chat into the night, spinning yarns and having laughs. One by one, the boys fire up their rides and head off into the cool, still evening, the quiet punctuated by snarling V8s and, startlingly, a P-40 Kittyhawk spluttering towards the runway, trying to land before curfew. 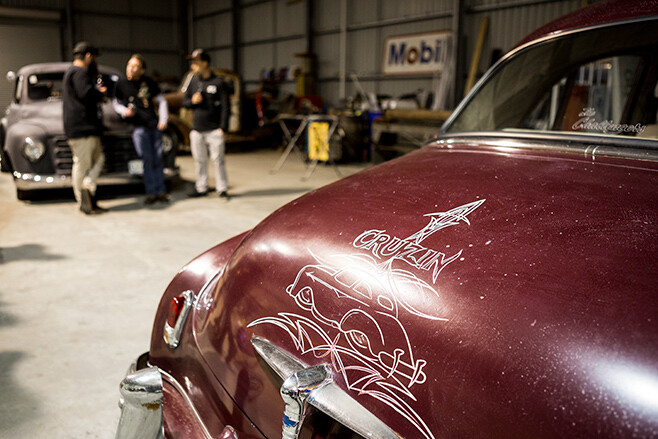 As snapper Nathan winds up his photography frenzy and the last of the mates departs, things turn introspective again; maybe it’s the whiskey as much as anything, but Dave’s words ring true: “Giving back helps keep the culture alive, keeping young guys enthused and giving them an excuse to hang out together,” he says. “This shed is a place where skills are shared, bullshit gets spun and stories get exaggerated, but it’s also a place where people give a f**k about each other. And that’s pretty awesome.”