JEFF Lutz is one of planet Earth’s most revered street car drag racers. Having been the perennial bridesmaid at Hot Rod Drag Week, he scored his breakthrough win in 2014 aboard the Evil Twin, a lightweight, heavy-hitting, composite-bodied replica of his infamous all-steel, matte black ’57 Chev.

In a bid to stay abreast of the competition, Lutz fronted up at Drag Week 2015 in a full-scale Pro Mod Camaro with number plates, and while it didn’t finish the event, it managed a 6.05@251mph, which is the quickest and fastest pass at Drag Week.

These days Lutz is just as well known for his involvement with the hit TV show Street Outlaws, and when he and the Evil Twin landed Down Under for special guest appearances at various Powercruise events, we couldn’t pass up the opportunity for a chat. Tell us about the car you’ve brought with you to Australia.

I brought the Evil Twin over that I’m well known for from Hot Rod Drag Week. [Powercruise promoter] Gup contacted me and asked if I’d be interested in bringing it over. I’d never heard of Powercruise before – it’s amazing – and I found out a little more about it and Gup said he’d ship it over and it’d pull a lot of fans. So we’re here, and it’s been amazing. To date the best it’s been is 6.60@225mph in the quarter. It goes high 4.20s in the eighth. It’s a 632ci with twin Precision turbos, and a Rossler 400 with a Gear Vendors. It makes right around 3500hp. I run it on alcohol [at the track] and I run it on regular gas for the street. I’m one of the ones that pioneered the twin fuel systems, so everybody’s copying me now. We’ve had pretty good luck with it. Talk us through the evolution from the steel car to the Evil Twin.

The steel car is 3800lb, and that’s what I’m well known for. We made a big splash with that car, and we made Larry Larson famous because we chased him down and gave him something to look forward to. Then I thought: “Man it’d be nice to build a lighter car.” [So I debuted the Evil Twin] in 2013 at the PRI show, and that sparked Larry to build his truck and everybody started going nuts – Tom Bailey started building a Pro Mod. I didn’t really build it as a Pro Mod. It is a Pro Mod because it never started life as a real car, but we did it in the mind of a street car because I love to drive them. When we got to the bumpers I could have put carbonfibre bumpers on it, but you can’t substitute a ’57 Chevy bumper, so we put steel bumpers on it, and lo and behold the car is 3100lb. We beat Tom, Larry and everybody at Drag Week with it. Everybody failed but we won. I’d like to sell it because I don’t need it anymore. We did what we needed to do with it, but my true love is the steel car. That’ll be my son’s forever. There may be a new owner, I’m not sure. It’s up in the air; I don’t know the date that it’s supposed to leave, let’s just say that!

Have you enjoyed the racing that you’ve done here?

It was great. At Willowbank I underestimated the track and I left it turned down from when we were filming, but when we hit the track it shook its damn ass off and I was like: “Wow, we’ve gotta turn this thing up!” I turned it up and it probably went a high 4.20 on its first pass straight off the ship and it was cool. I didn’t do anything different other than turn it up; the track was a world-class facility, as is this one [Sydney Dragway]. I wish I would have got to run on this one. But the runs I did get, the first one shook a bit and I was able to pedal it, but everyone who wants to run me is in what you call a Doorslammer here – we call them Pro Mods in the States – of course the fastest cars want to race me. I had a lot of fans that were saying: “Oh, you lost,” but I didn’t lose, the fans won and that was what it was for. It was cool. While we’re on your fans, you’ve got plenty of them here in Australia. How has that been?

It’s amazing. We had 1000 shirts made and in three days we’ve sold all but 100; we’ll finish up the 100 today. It’s insane. They said that Sydney is a little more uptight than the Gold Coast, but I haven’t met one person who’s mad or pissed off. Everyone’s been laidback, they treat us like gold, they’re quick to help out and it’s been a lot of fun. Way different than I thought.

How was it to get that breakthrough Drag Week win in 2014?

It was a quest that we started in 2009. From the time we started doing it I chased Larry and I made him run for it. To win Drag Week was bittersweet. We won that day and my son Jeffrey went 200mph in the old car; I was crying! We started that Drag Week and I was like: “Jeffrey, let me turn it up,” and he was like: “No, we’re good.” The first day he went 8.0, then we got to the next track and got him in the sevens, and on the last day he said: “How fast do you think it’ll go?” and I said: “You better hang on.” It hiked the front wheels up and carried them down the track. That car is a handful, and to see him do it was amazing. What do you think is the secret to surviving Drag Week?

You’ve got to keep the car cool, and keep the batteries charged. They’re the only two things you’ve got to worry about, and if you’ve got a good engine builder, you’re golden. People ask me all the time how hard is it, and it’s the worst thing you can do in a car; it’s brutal. The rollcage gets so goddamned hot you can’t put your hands on it; it’s crazy. But it’s fun! It’s a test between machine and man and you don’t even have to win the deal. If you make it five days, you won. It’s something that Jeffrey and I started together and it got him into drag racing. It was something we could do and we built his car and it’s been crazy because he’s fully into it and him and I work the shop; it’s great. 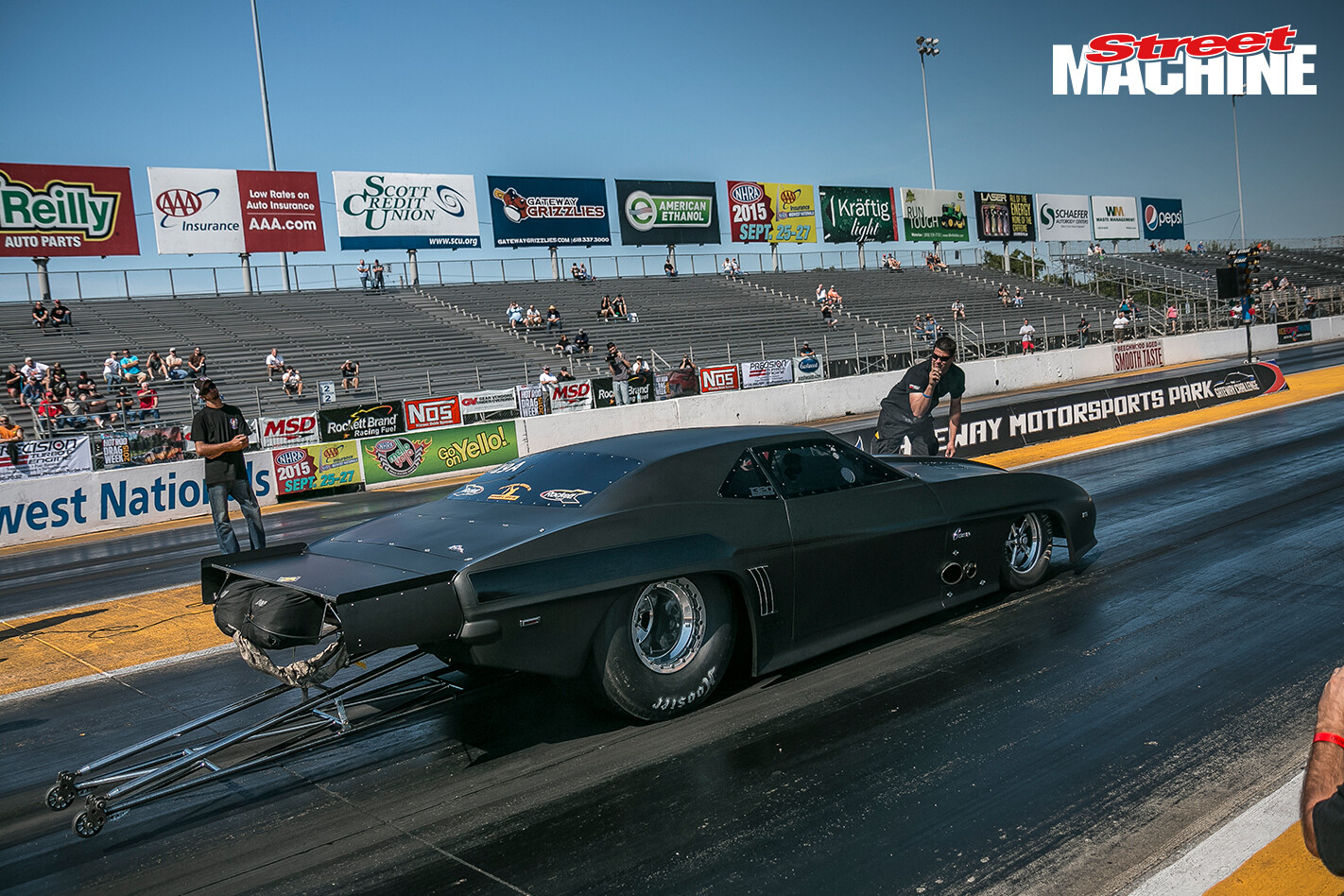 Will you be running the Pro Mod Camaro at Drag Week again this year?

Yes. We failed this past Drag Week with the Camaro. I had a charging issue and I was melting shit left and right. I had two days of no sleep and I was done. Then Hot Rod started Drag Weekend in Tucson, Arizona, so I went there and it was flawless. I did 350 miles without even taking the hood off. We went 6.20 every day and we won, and it was nice to get that out of the way. I want to be the first in the fives, and I want to do it at every track. They’ve let the tracks out, and every track is very doable except for I think Columbus; I haven’t been there in quite a few years. I used to test there all the time, but the track went to shit after the NHRA kind of bailed from it. That’s the only track that’s questionable. Tell us about your involvement in Street Outlaws.

Season One had ended and Chief said: “Hey man, I want to turbo my car. We may get another season out of this deal.” Nobody knew what was going to happen, but when Chief got a hold of me I flew out and Jeffrey came with me. We got the turbos on and the headers done and we were actually cutting street signs for aluminium for parts on the car! We did his car, then I came back and we did Shaun’s car. I had very little involvement at first; then it kind of went crazy with the turbo stuff and the headers. It was fun being with them and I got to meet a lot of nice guys. A lot of the fans don’t understand; they think it’s TV-generated, but these guys are true street racers; that’s what they do. It isn’t Hollywood-made. That shit – the Top 10 list, cash days – everything is real. It was a real eye-opener for me. They made me a street racer! Because I’m a drag racer, and to see what they can do on the street, I was like: “You’ve got to be kidding me!” I saw some stuff I didn’t like and I was like: “Why are you guys running ladder bars?” Chief built a brand new car and it had a ladder bar! He said it’s the best thing to do and I said: “There ain’t no way!” We finally got them switched around and it’s been fun for us and the fans. Mechanically getting them where they need to be, that’s been my involvement. Any chance we’ll ever see your name on the Top 10 list?

We start filming this season at the end of March and we’re going to run my Camaro for the list. It ought to be interesting! There are a lot of fast cars coming for the list, and everybody has upgraded. From the end of Season Seven to now you won’t even recognise it; it’s crazy! But we’re going to attempt it in March. There are no guarantees!