Car crafting is a family affair for the Coburns

A WISE bloke once said that if you love what you do, you’ll never have to work a day in your life. It’s a mantra that Sydney’s Coburn brothers, Jason and Glenn, live by. They’re second generation body and paint gurus and between them, they run Exclusive Customs. 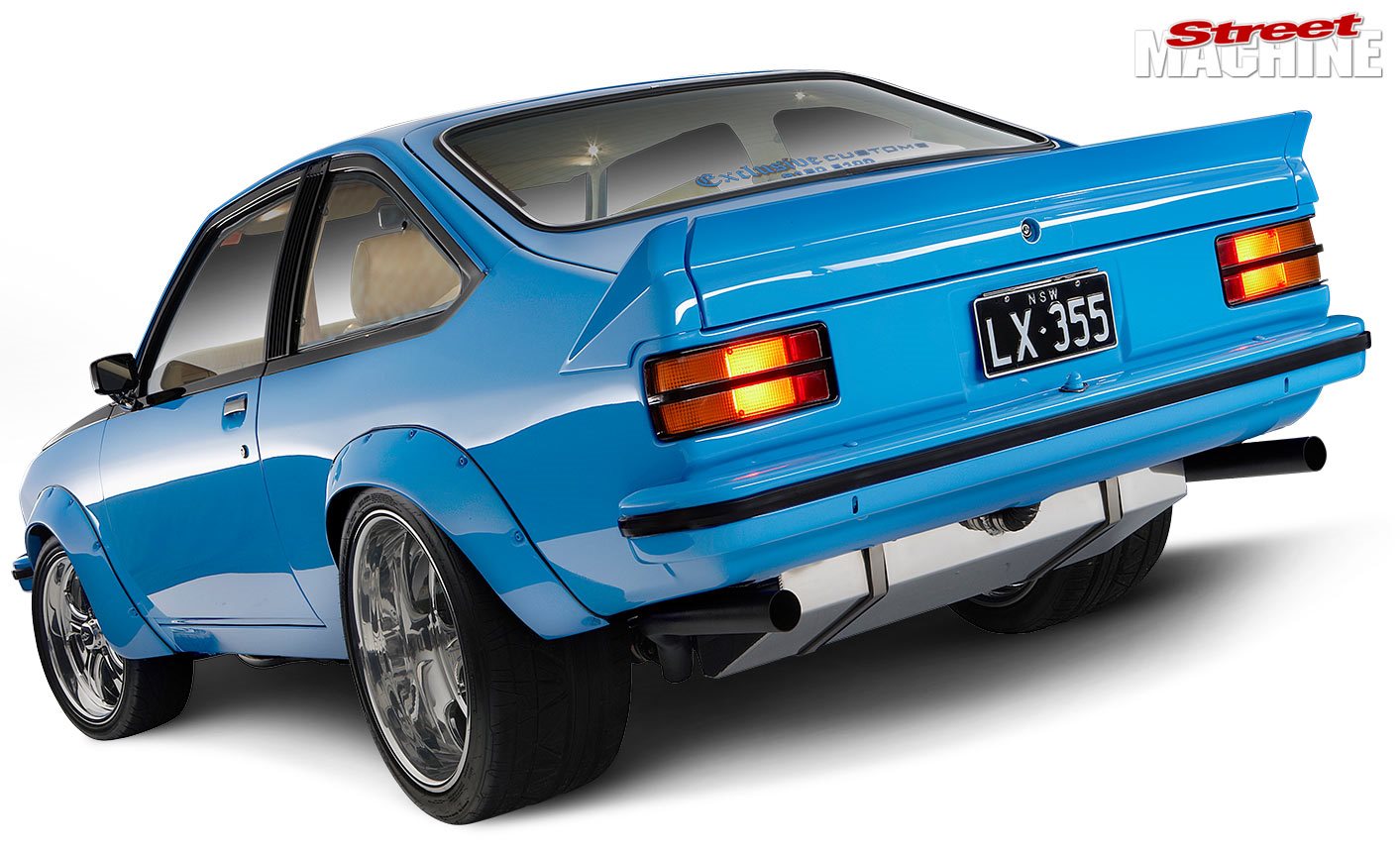 A big part of their success is their unwavering passion for cars. Jase’s stunning Exclusive Blue LX Torana hatch stands as testament to that.

“Glenn and I have always been into cars,” he says. “We bought Kingsgrove Motor Body Repairs in 1999 and always had one or two restos in the corner but the way the insurance companies were going, we gradually focused more on restos and customs.

“It’s always been our passion and it stems from our old man, who was also in the trade and did a lot of show cars in the 70s and 80s. Growing up, there were always projects on the go, so we didn’t really have a choice but to follow suit.”

Glenn’s HG Prem has also achieved a lot in the scene, and you rarely see one brother’s car without the other. Not only do the boys work and play together, but they’re great mates with complementary skills.

“Yeah, it works well with me being a beater and Glenn a painter. Everything we do, we do together. We have the same group of friends and share a passion for cars. It’s also great to have a father who’s into it. He comes to all the shows with us and he’s just one of the boys.”

The inspiration for Jason’s hatch was a car he owned years ago. It was the same colour, packing a 308, ’Glide and nine-inch combo, with Cragar Pro Stars and 28x12½s on the rear.

“Dad and I built the last car before we even had a shop. I loved it but I wanted to buy a house, so I had to part with it. I’ve missed that car ever since.”

In 2005 he came across an original two-owner 253 auto LX hatch that an elderly couple were selling. Given his profession, he easily picked that it had a good, honest body with only very minor rust. A subsequent spell under the garnet gun at Advance Blasting & Stripping confirmed his diagnosis, and the shell was taken back to the metal and put in two-pack etch primer, ready for Jase and Glenn to do their work.

“We did the repairs and spray-polyestered it, then blocked it down before high-filling it and blocking it down again. Glenn painted it in PPG blue and black and we fitted it all up just in time for Mudgee Motorfest 2010.” 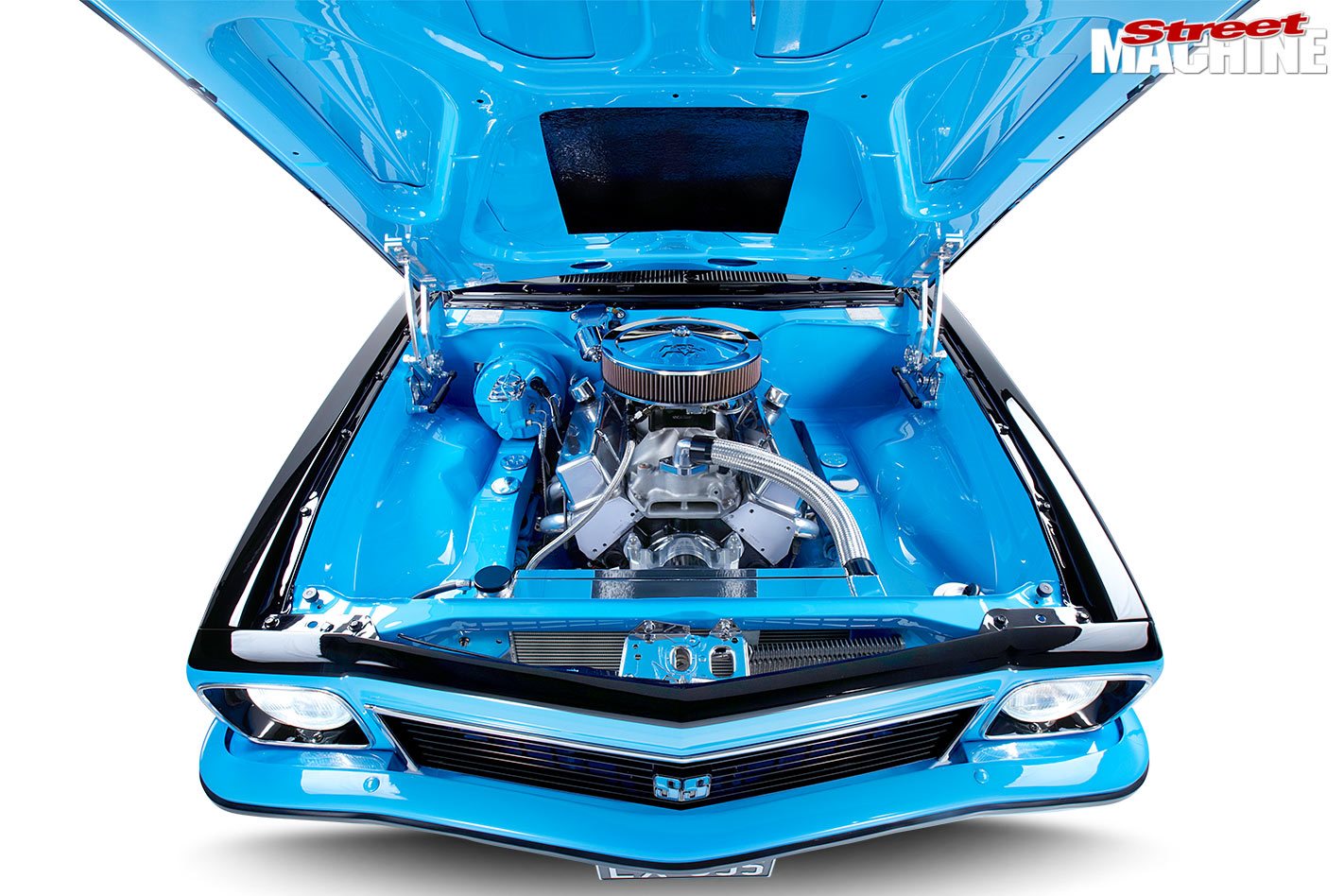 Smoothing, detailing, colour-coding and heaps of billet and braided hose are a sure-fire recipe for a sweet engine bay. Tough small-block makes almost 600hp but is still very streetable

The original plan was for a street and strip weapon rather than a dedicated show car, which is how the hatch ended up with such a serious engine and driveline. Up front is a 400ci small-block pieced together by Ned at Hercules Race Engines for a dyno-proven 598hp. An Eagle crank and rods plus SRP forged pistons create a rock-solid bottom end, while DART Pro 1 heads and a monster roller cam deliver sky-high revs and bulk power.

An Edelbrock Victor E manifold funnels the air/fuel mix into the chambers via a Holley 850 Street HP carby, while a set of stepped four-into-one headers dispose of post-combustion waste. The Powerglide auto has been built to cop over 1000hp, and runs a strip-ready 5000rpm converter. The rear end is equally serious — a braced nine-inch with 35-spline Mark Williams axles, 4.11:1 gears and Detroit Locker. The body was mini-tubbed and the rear flares were stretched to accommodate big rubber. 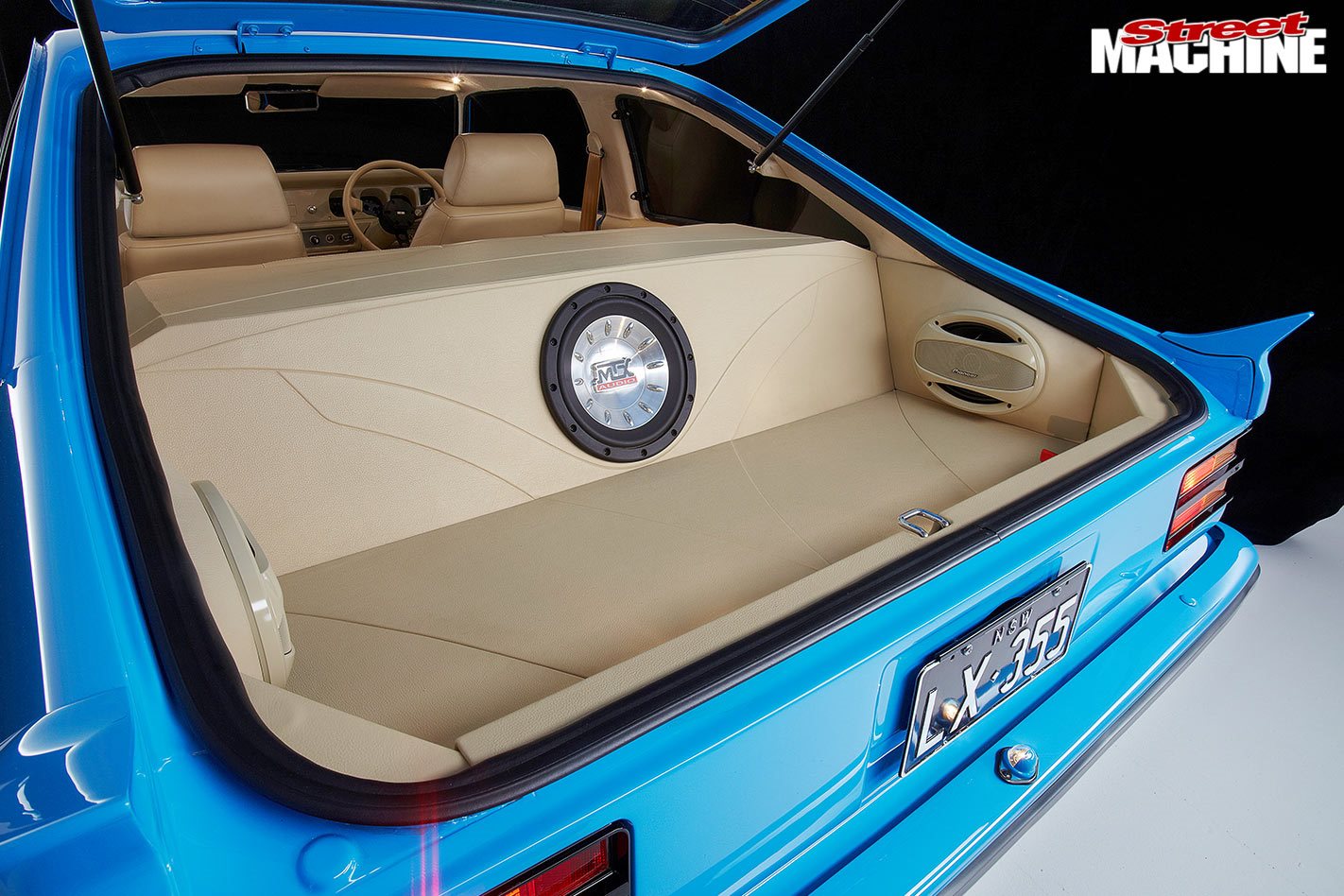 “It’s got all the gear to go fast but about halfway through the build all that changed and I decided not to put a ’cage in it,” Jason says. That was the turn away from the track and towards the show arena, and the car then became a showcase for the brothers’ skills.

The renewed approach to the build retained all of the go-fast bits but with far more attention paid to the finer details. The diff, trailing arms, front end and steering were all carefully detailed and colour coded, and a 110-litre alloy drop tank was fabricated and plumbed up with braided lines. 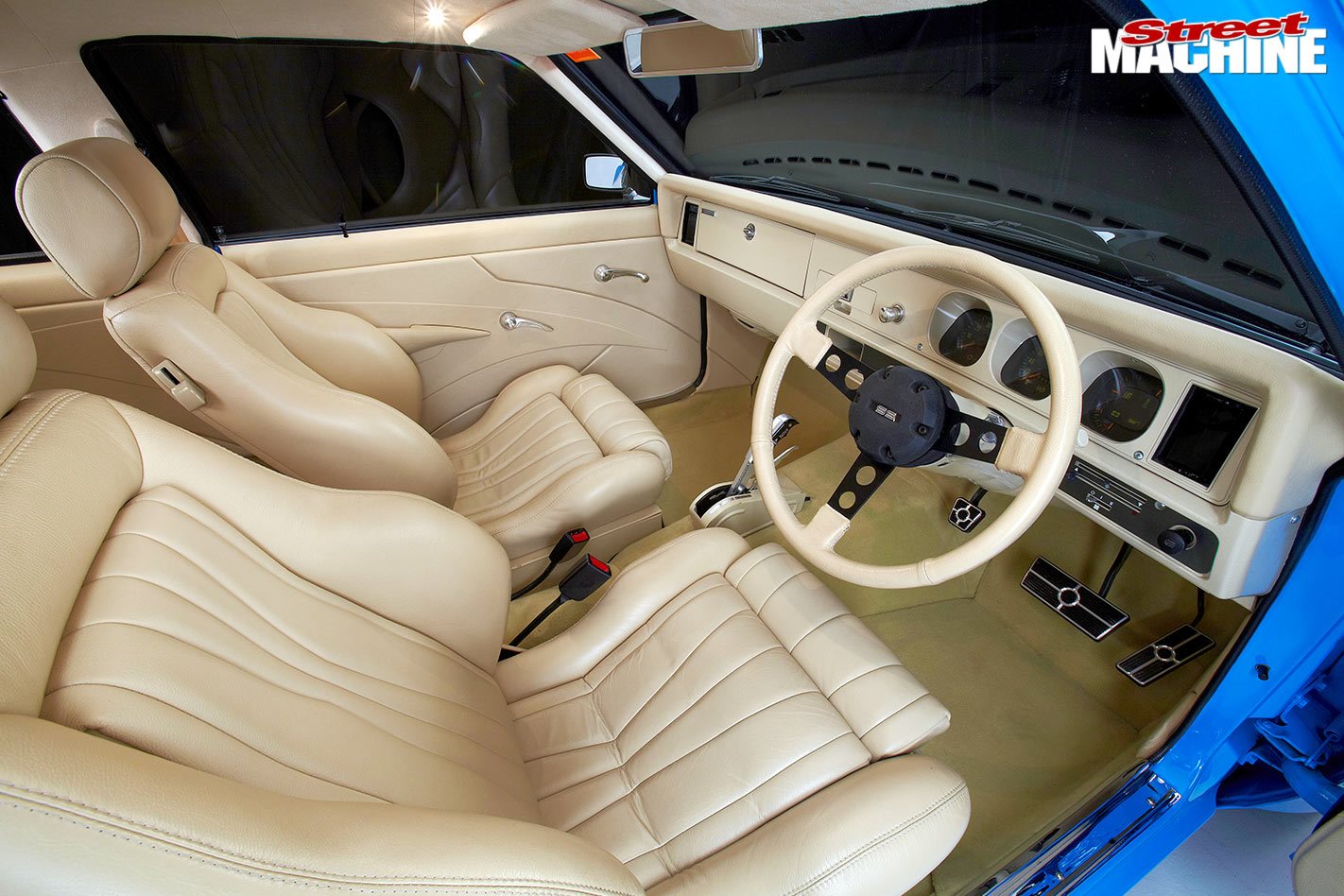 Flat floors, suede headlining with downlights and billet trimmings are just a few highlights in the plush-yet-practical custom cabin

Speaking of billet, the car’s 15in Cragar wheels were switched for a set of stunning Showwheels Hammers in 18x7 and 19x12 sizes, more fitting for the show focus. Rears are shod in monstrous 335/35/19 Nittos that fill the A9X flares to perfection and provide a menacing stance.

The tasteful cappuccino-coloured custom leather cabin was pieced together by Simon at Elite Custom Interiors. It features customised Recaro front seats and a rear bench built to match, together with carpeted flat floors and colour-coded retractable seatbelts.

The hatch was front and centre at Summernats 24, where the goal was to make the hallowed Elite Top 60. Jase achieved that and scored 2nd Top Coupe to boot. 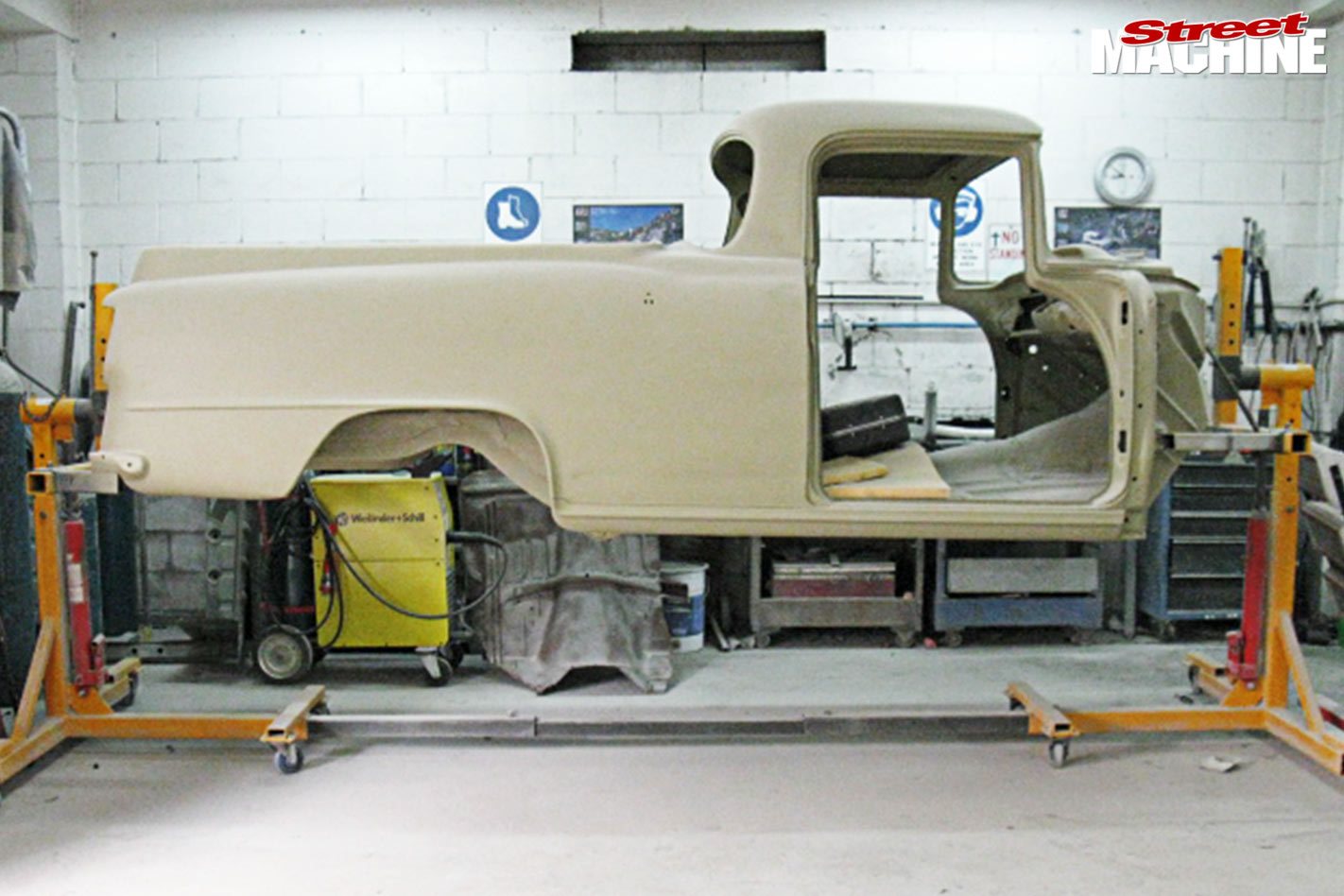 The boys were building an FB ute with a small-block Chev, Turbo 700 and air conditioning for their old man. “It’ll be a Street Elite cruiser with billet wheels and heaps of detail,” Jase says

“We travelled to a few shows and in October 2011 we decided to pull it down again and respray it,” he says. “Glenn spent weeks cutting and buffing it inside and out to take it to the next level. At Summernats 25 it won Top 60, 2nd Top Standard Paint, 3rd Top Tudor and PPG Supreme Finalist.”

For an Elite level car that serves as a rolling business card for Exclusive Customs, Jase doesn’t mind getting it out for a squirt on the weekends and there’ll be more cruising soon.

“I’m changing it back to 3.5:1 diff gears and a 3000rpm converter so I can use it a bit more,” he says. “For a car that sees its fair share of street use, it does well in judging and that’s why I was rapt to make the Top 60 at Summernats and win 2nd Top Paint. I drive it as much as I can.”