FROM the July/August 1986 issue of Street Machine comes John Zeigler’s famous HJ ute. The car had a cameo spot in the first Mad Max and is still in John’s possession today! Here’s the original story in full:

This build-up feature on John Zeigler’s HJ ute is a real lead-and-follow exercise. You see, every time John modded this magnificent model, some bum in Melbourne town would steal his design. At times, there were three or four clones rushing around the southern capital. It couldn’t go on. John’s desire to be different was gettin’ him down. He was gunna have to build something too difficult to emulate.

In ’73, John ordered a new, light-green HJ Holden ute to handle hack work at the Zeiglers’ Shell servo. It was always going to be a showpiece for the business, but things got a little out of hand. Up to this time, hot rods had been John’s go – a T Bucket, ’28 Chev and ’24 Wanderer all received the street treatment. But our mate’s not averse to trying something different, and the Holden ute was a logical consequence. 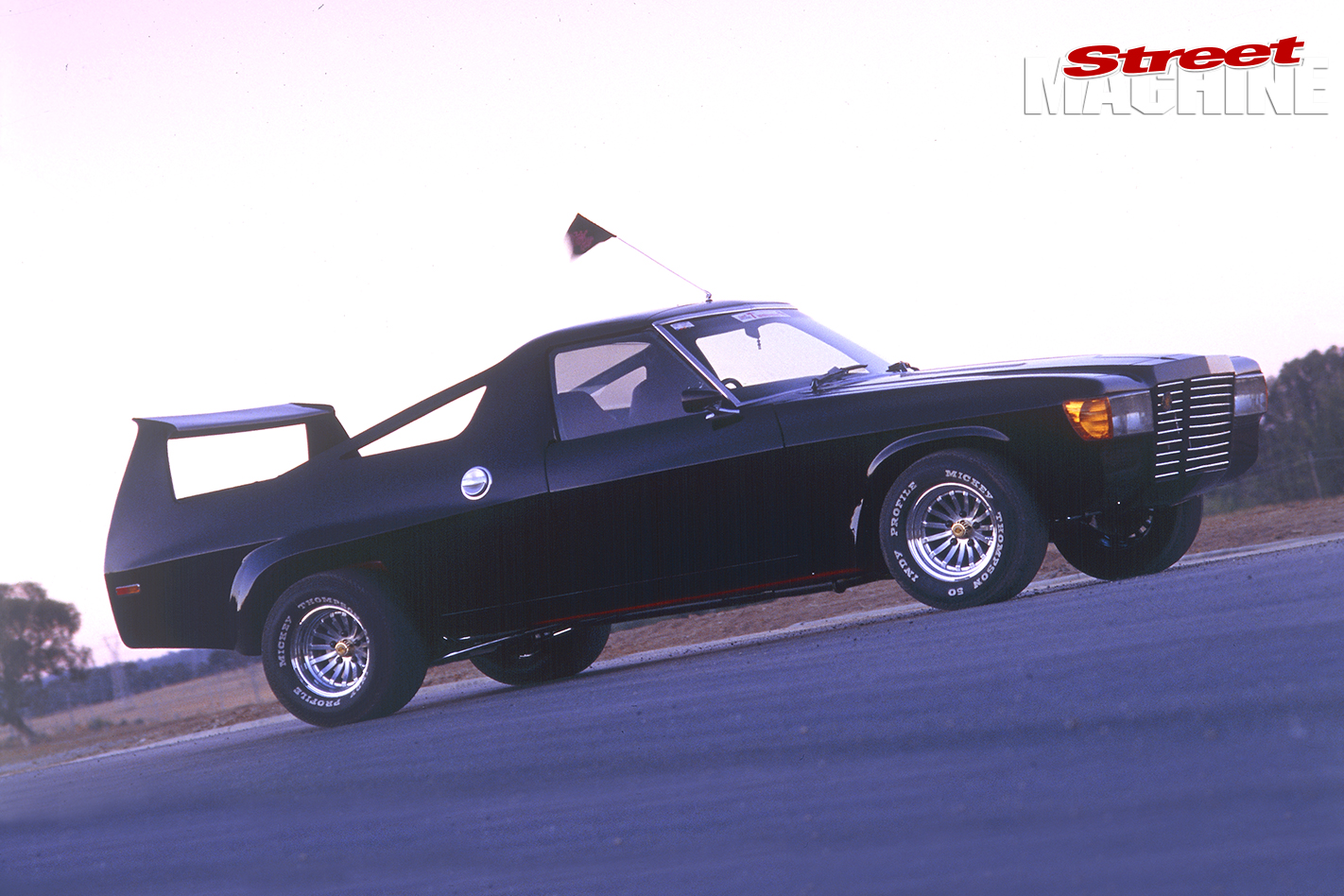 First up came a Caprice nose. These might be common as one-armed Irish grenade throwers these days, but back then it was pretty radical. Daryl Withers was a good mate with good hands, and he applied customised green, olive and yellow colouring. And there was a spoiler out back – only this was one you couldn’t buy over the counter. John had another mate (he’s a very friendly bloke, our John) who made the original pattern for a GMH factory spoiler. Only The General kept it on ice – permanently. A sample was slipped Mr Zeigler’s way, and he had a rare original.

But monkey see, Monkey do… One by one, Holden utes began appearing with Statesman noses. John took the ute to the second Nats – and decided it was time to go the whole hog. This just wasn’t good enough – the man wanted to retain his individuality. It would have to be the big transformation.

“I wanted something that was really different,” says John. “But it had to be done well. I didn’t want it to look as though the work had been tacked on here and there. It had to be almost like a factory job.” He’d set himself a tough assignment.

But John had a fair idea what he wanted – low and wide was the brief. So he mucked around with dozens of designs on paper, sticking them to the side of the ute and adjusting as he went. When the final solution was reached, the rear guards were cut open, stretched out and fibreglassed in. That extended the width just enough to give John the look he was after. A Kraut connection was used up front, where S-Class Mercedes Benz headlights and flasher lamps were grafted into the nose. The front guards were glassed to suit – and what a neato job it turned out to be! 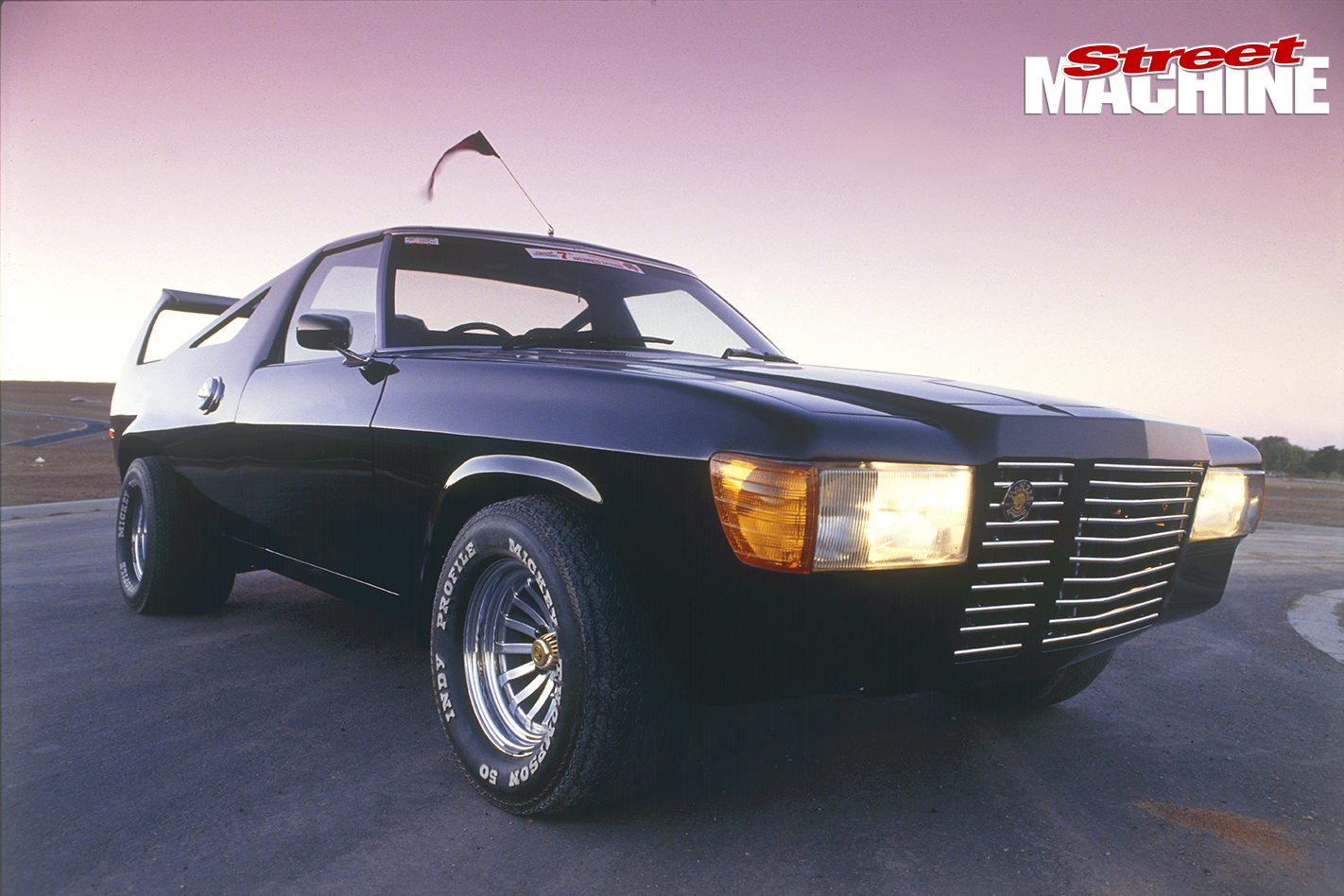 The grille’s something special, too. It was made from steel tubing, hand-cut and welded together. And offset – just to be a bit different! With the front bumper removed, the horizontal bars and Merc lights give this ute a real sharkish look. Any sharper and you’d cut your finger.The spoiler wasn’t quite what John-Boy wanted, so it was placed in the circular file and a Bob Jane T-Mart-type unit slipped on. But it was a bit wide, and that meant a real tough job of cutting and rejoining the wing to fit. Even now, John isn’t totally satisfied with the result. But you gotta use a microscope to see the join!

Then John and Daryl embarked on a tricky little idea. Basically, the aim was an extended roofline at 45 degrees. Sounds simple enough, but when you consider the cutting, welding and flex problems involved, you’d recognise the boys weren’t shirking any workload. Two sections were cut and welded into place. Out came the grinder, and the joins were soon clean as a whistle.

But wouldn’t you know it – the monkey minds were at it again. What did a bloke have to do? Chop the top off, what else! The ute was sent away to have a targa top cut in – hopefully to push the ute into the too-hard-to-copy category. The tops of the window frames were lopped.

Then came a real boomer of an idea. A genuine original. “Let’s get rid of the door handles,” said John. No, he wasn’t planning to climb in via the roof each time he wanted to cruise. He had another way of opening the doors. The handles were removed, and the holes filled. That was a fiddly job in itself, since removing handles leaves a pretty big gap. The master plan was to install Ford boot-release buttons underneath the outside mirrors. Wired to a reworked lock, one press lets you in. For security, John hid a switch that isolates the locks. Very clever!

At this point, John’s ute was still green – inside and out – and was still lugging all manner of mechanical pieces around the city. And it stayed that way for two years. Then the real fun began. 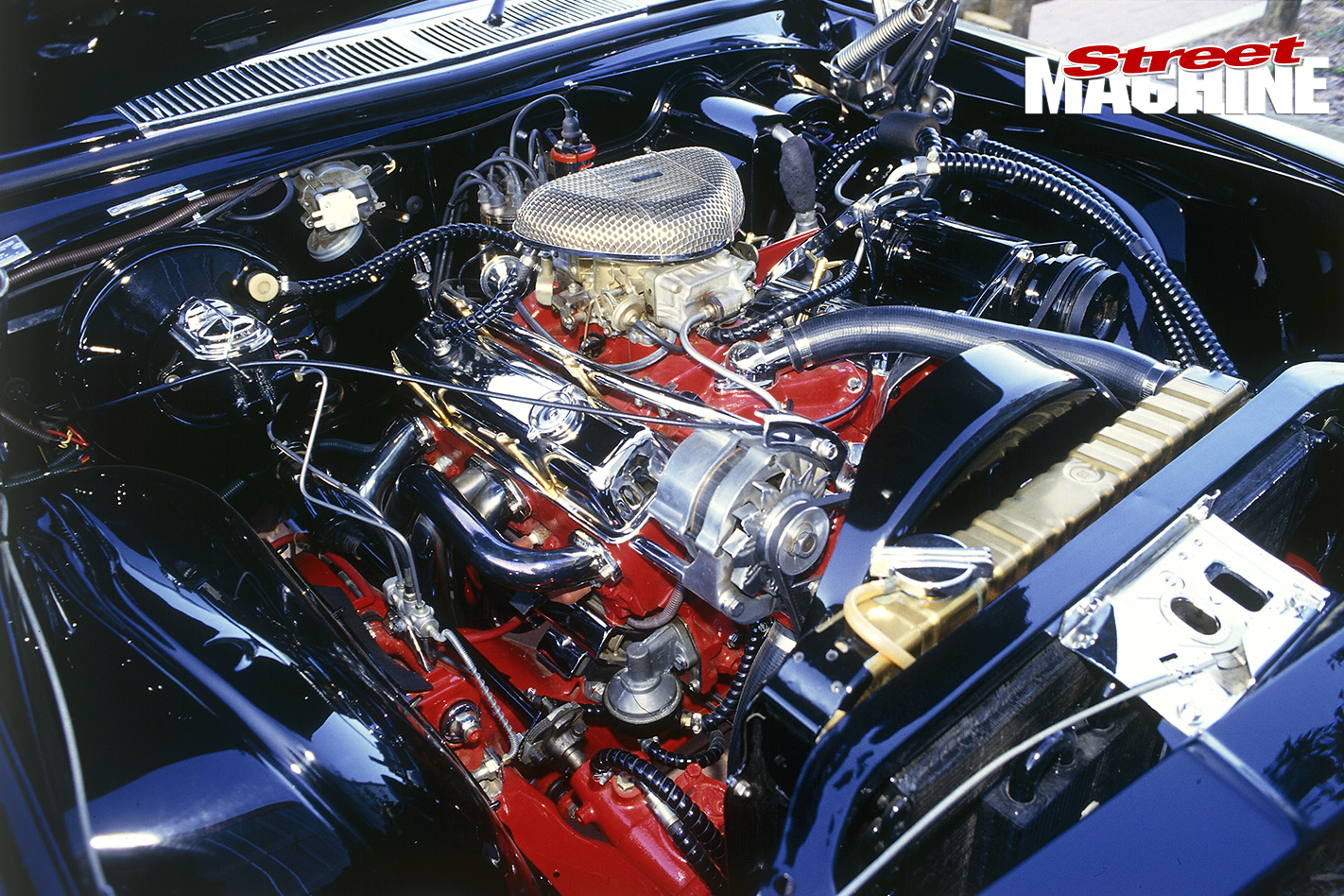 John had been thinking about his project again. And the Zeiglers knew that meant more work for the 55-year-old dad. This was gonna be his final fling, the grand finale for the beaut ute. It was stripped to less that its knickers – right down to the chassis, in fact. Every single nut and bolt was removed, checked and detailed. For two years John and Daryl worked away on the bodyless machine. But the motor was part of John’s meticulous build-up.

He didn’t want a fire-breathing monster, just something with a bit of urge. The 350 Chev donk is stock, except for the Sig Erson cam, worked heads and Pacemaker headers. A Turbo 400 tranny feeds power through to a full Jag rear end. And that’s it – John’s happy. He’s got a lively performer that doesn’t cost an absolute bomb to run.

No, the main emphasis here was body detailing and mods. John wasn’t happy with the first attempt at extending the roofline. The new sections were flexing and causing all manner of paint problems, not to mention the bulky look they’d produced. A triangular hole was cut in each, and both sides fully welded. They’d only been track-welded before, hence the flex problem.

The targa top wasn’t quite on the pace, either. Fine in the dry, but on any of Melbourne’s many wet days, you had to wear a raincoat in the cabin. The problem was badly designed drainage channels. They were torn off and new ones welded in. End of problem. John took on the pain of cleaning back the chassis with paint stripper. No sandblasters here! The belly’s now as clean as the exterior – it’d wanna be! 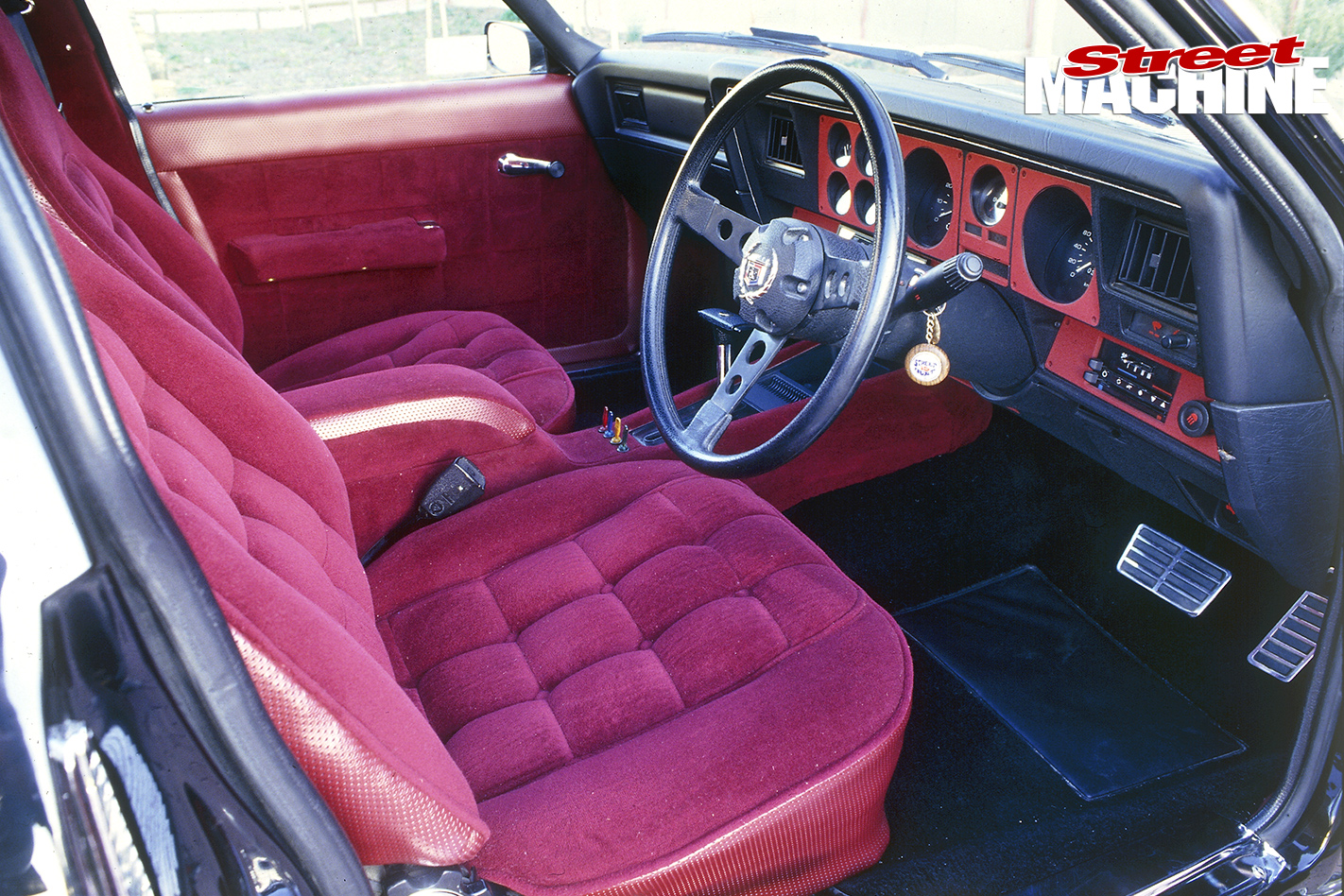 The innards were changed to red velour by Bill Ditchfield, who did the original conversion. The GTS dash was retained – and inside’s a nice place. A new bonnet was bolted on, complete with cooling grilles. There wasn’t one panel that hadn’t been extensively worked over.

All this stripping down and rebuilding had been taking place in a disused Shell servo on the other side of town. It was also the site for the paint job, an area John’s less than satisfied with. Here’s his story.

“We used Acran Black when it had just arrived on the market. There wasn’t much information about the paint going around, but we knew we wanted a really thick, even cover. We applied more than 12 coats of colour, and now the paint is still moving all over the place. We’ve since found out three coats is about the best coverage! I can tell you, when we went to that servo the workshop walls were white. When we left, they were black as buggery!” Needless to say, the colouring-in will occur again in the near future.

But for the moment, that’s it. John wants to take things easy for a while. After all, he still uses the ute to tow his rods all over Australia, then show the lot when he gets there! There may be minor changes in the wind, but it’s time for John to sit back, put the size nines up and enjoy the rewards of his work. He deserves a break… 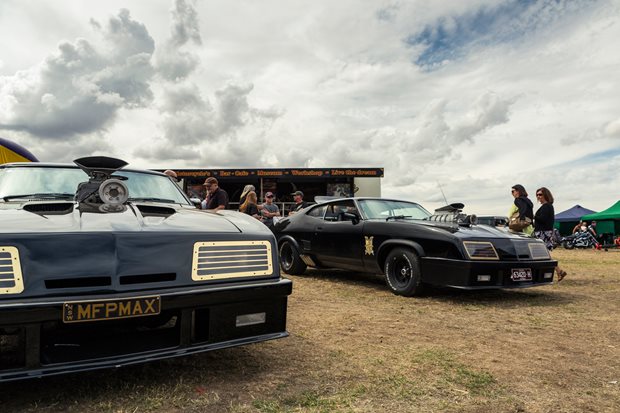 We head to Clunes, one of the towns where Mad Max was filmed for the Mad Max Reunion Tour