While the excuse is to build these junior hot rods for your kids or grandkids, it just so happens a fully grown bloke can fit into one

THE West Aussie father and son team of Keith and Peter Hahn have been putting together these fully operational junior rods for around 15 years now, initially as a gift for Peter’s two daughters, but after people saw how nice they were, they started being asked to build them. They’ve become so popular that the Australian Street Rod Federation even has a judging class for them and they’re a popular display at any ASRF sanctioned show. We had a chat to Peter to find out how it all came about and what’s involved in putting these half-scale hot rods together. Over the years they’ve sold over 70 complete cars plus a few bodies and parts to people, so there’s a pretty good chance you’ve seen some of their work at a rod run somewhere already.

Tell me how this all came about.

It started off when our kids were little, we’ve got two daughters, and there were a couple of hot rods in our street at the time. Some people were making a little ’34 Ford junior hot rod body at the time and that’s how we got involved. People started saying to us: “You’ve done a good job, why don’t you make some?” It started from there, so I bought another body and improved the body shape.

You now build your own bodies?

I made them a little bit bigger and made the lines look better. All I did was go to car shows and look at the shape and design and improve it from there. 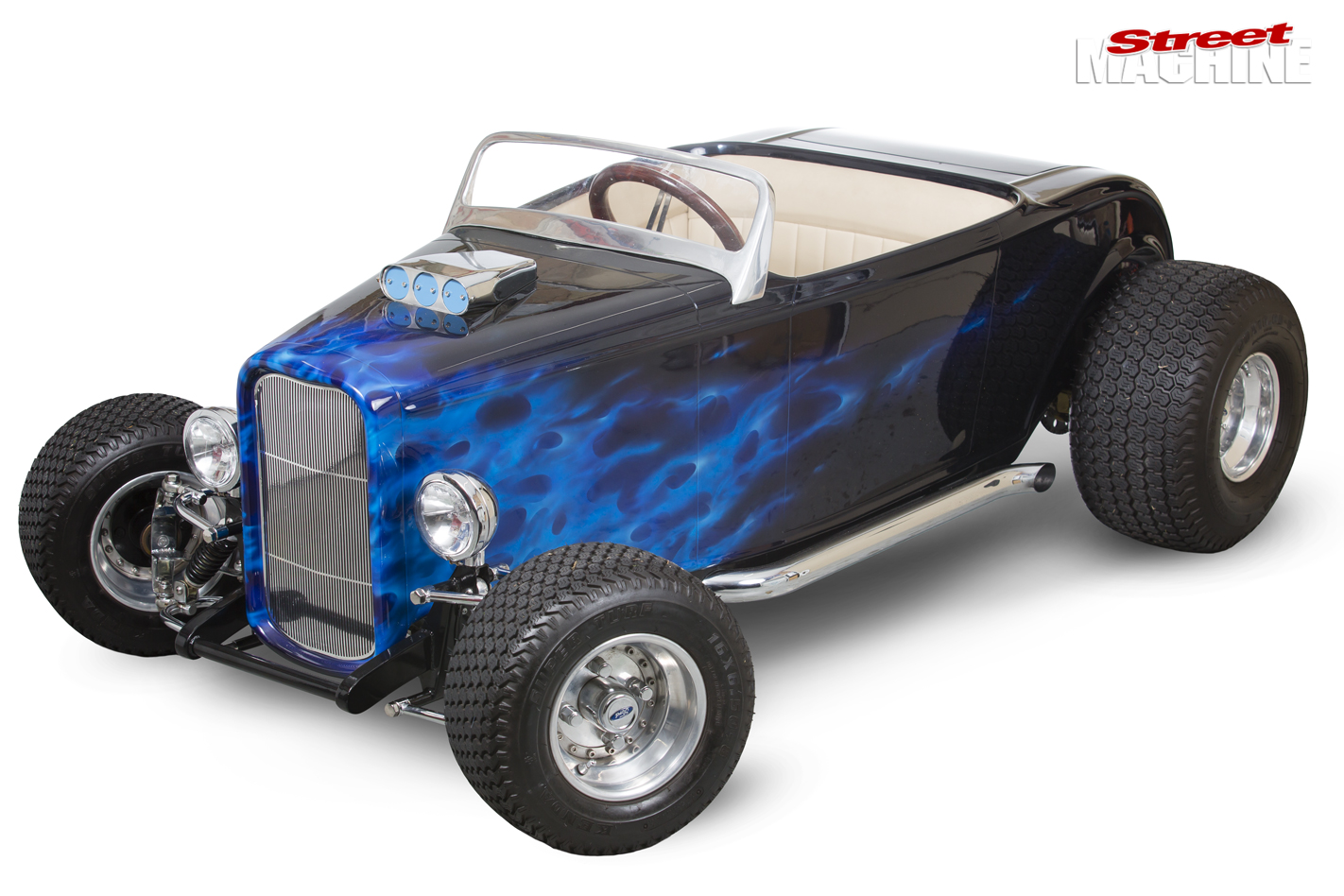 This is Keith's '32 which features a polished version of the windscreen frame also designed by KP Junior Rodders. Very cool!

I remember when those bodies first came out, they were a little bit off.

I looked at quite a few different ’32 bodies and there was one that had quite a lot of details, but it was very narrow and didn’t really look like a ’32 roadster body shape. I picked one up from the eastern states and ended up cutting it up, stretched and modified it, made it longer at the nose and put some details into the body. I took a lot of photos of full sized ones and made a mould from there.

And then your dad suggested you make a T-bucket body?

We did that one from scratch starting with a block of foam. Foam, bog, foam, bog — bog it up, rub it off [laughs].

Do you have some kind of background in fibreglass or fabrication?

No, I’ve been in the radiator industry all my life. I got some fibreglassing tips from Ray Hunt in Malaga. He said: “It’s not rocket science,” told me where to buy some gear and that’s how it started off. 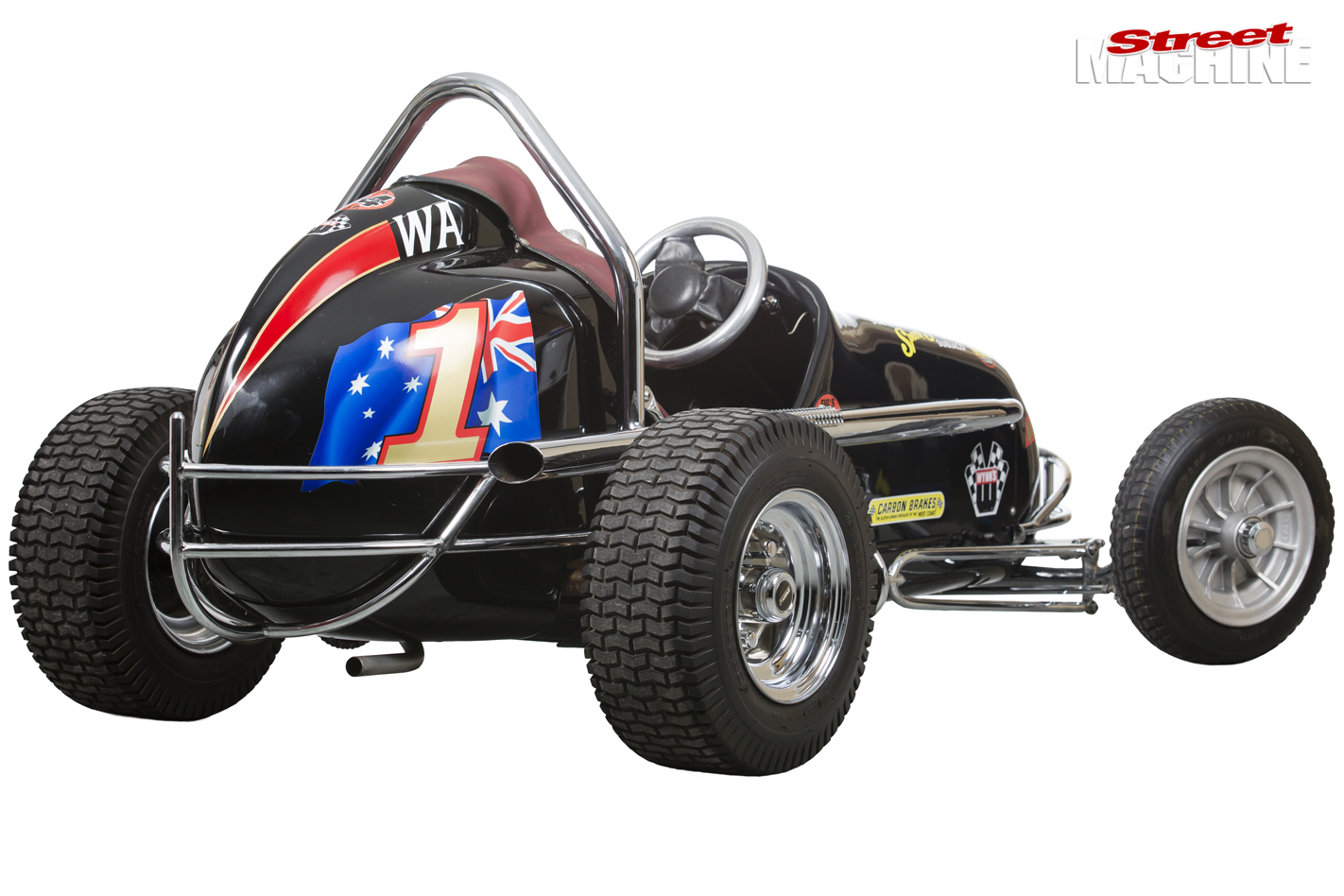 You also made the Hemi motor out of fibreglass?

I did that all from pictures. I made a mould out of scrap bits of stuff in the shed — bits of metal, a bit of stick here, bit of rod here, bog it all up, make the shape. I made [the mould for] the blower in three sections out of wood. The pulleys are aluminium but I had to machine them up.

Who does the chrome on the fibreglass bits?

I had that done in the eastern states by Chrometech. They said they could chrome anything. It’s the same process as chroming metal, so you can polish it just the same. It’s worth the money, it looks amazing.

What’s the hardest part of the build?

Finding the wheels. The front wheels on the T-buckets are off a junior dragster, they used to have those 2.5in wide tyres but now they’ve gone to a one inch. You can still get them from America, but they cost a lot. The rears on the blue bucket we had specially made up, we had them spun on a die that we got off a guy here in Perth who used to make them for speedcars.

What about the wheels on the new car you’re building?

The back rims are off an ATV and the front were off a golf buggy that we cut 40mm out to make them narrower. 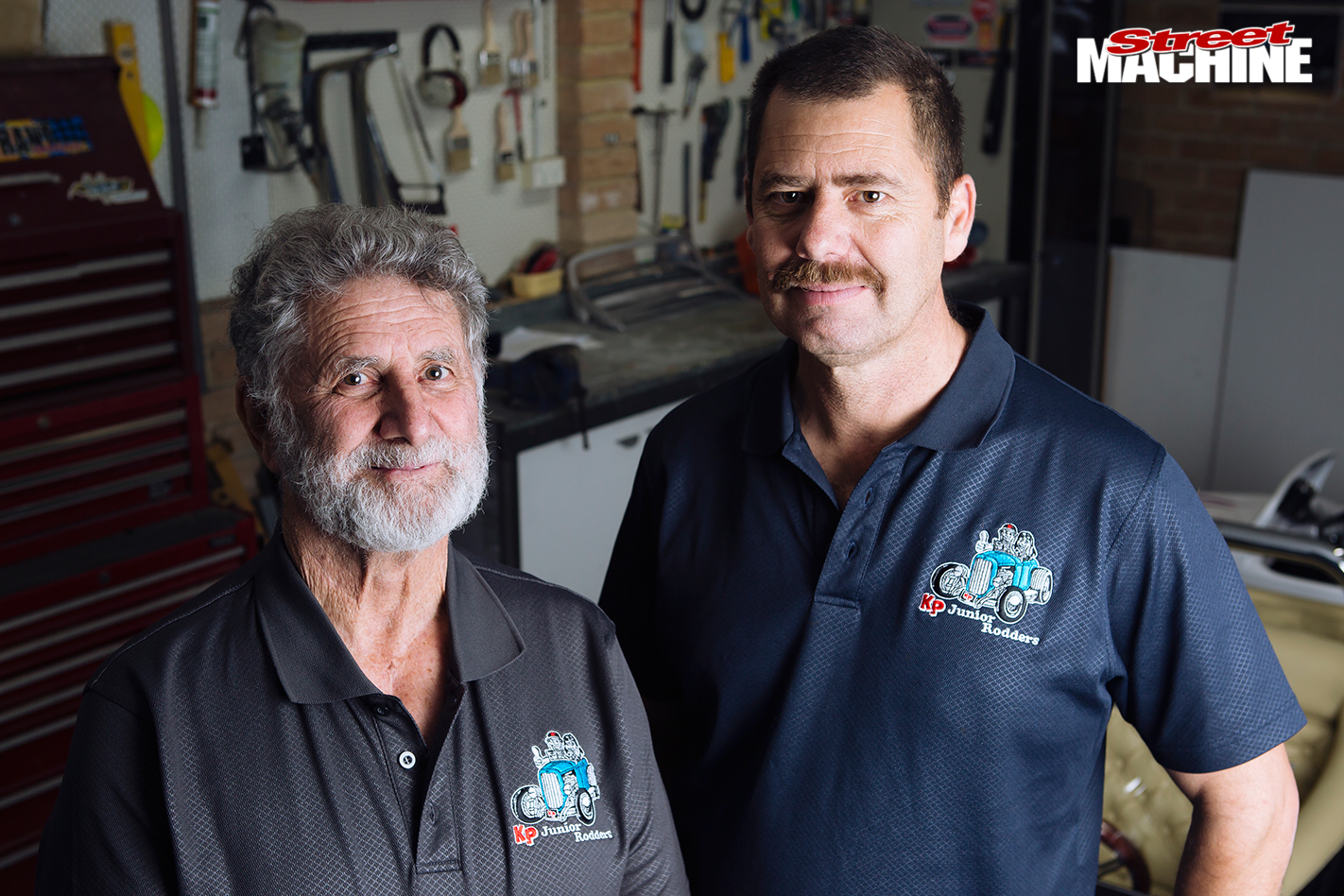 KP Junior Rodders is the father and son team of Keith and Peter Hahn. Between them they fabricate around 90 per cent of the parts for each car, including all of the fibreglass bodies, tube axle and IFS front-ends

And where do you get the tyres from?

Do you handle the paint and trim as well?

We can build a car up to a roller or driveable stage and the customer finishes it off themselves. It also gets them to work on it as well. We don’t do paint or chrome because it works out too expensive.

Tell me about the tube axle on the T-buckets.

We have the springs made at a spring works, but the axle we make ourselves. We get the length of tube bent, then trim it up and put it in a jig to do the ends. Dad bends them all up at his old work and we’ve done all the engineering so you can just bolt it up and it’s perfect all the time. Basically, we did all the homework for everyone.

The independent front-end on the new car looks pretty trick.

Dad designed all that. It was his idea and they drive much better, especially when you go hard in it and go around corners. We also fabricate all the chassis here out of square tube and laser cut steel to get the shape of the frame horns.

What are the engines you put in the cars?

We use a 6.5hp engine with an electric start and a 2-to-1 reduction box already on them. They’re cheap as and we’ve never had any problems with them. 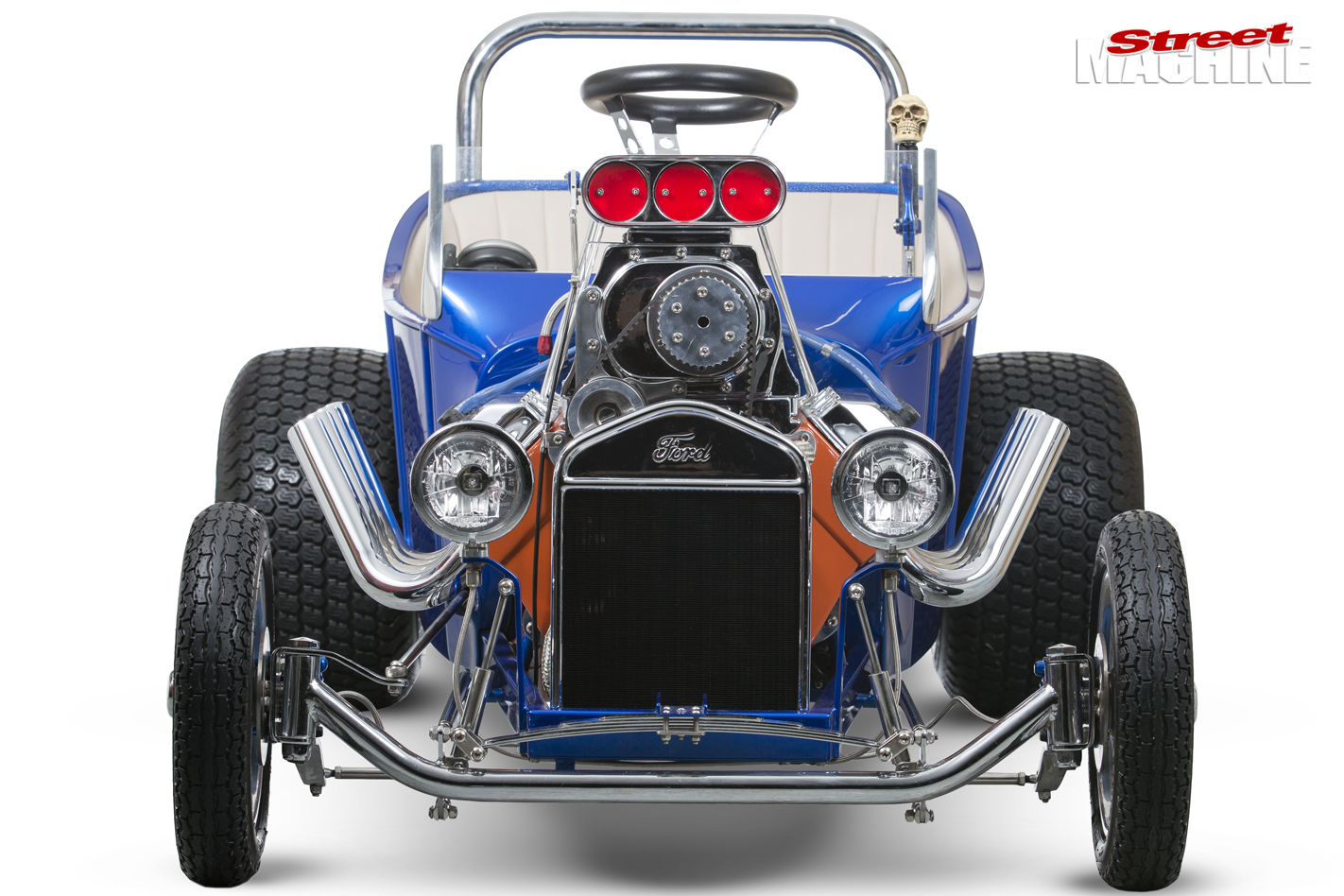 What’s the big lever on the blue T-bucket?

That’s for the gearbox, it’s got a four-speed in it with a 125cc Lifan motor in it out of a motorbike. A mate had a whole bike and was selling it, so I bought it off him. It’s still got the kick start on it, but I’ll put one with an electric start on it later.

So it goes alright then?

Yeah [laughs]. My old man reckons I was doing 90 kays down the street. It goes pretty quick and it’s pretty loud. It’s got a straight exhaust that goes from the back to the zoomies at the front and exits out of one pipe on each side.

How do you fit in the cars?

The new one is designed with pendulum pedals hidden up inside the engine block. I’m 6-foot-2, so I’ve got to fit in it and be able to work it. The blue bucket you sit like you’re in a chair with your feet straight down and because the engine is under the seat a bit, you can’t get your bum down low enough. I stretched the back of the car about 80mm to make the engine fit and tried to not throw the proportions out too much.

You really go to a lot of detail to make it look realistic, you’ve even got a pop-out plate for the blower!

Yeah, it’s just a bit of plate with some bolts and springs behind. I even put oil pressure switches on it, temperature switches, even a fake starter motor that I took the guts out of. If you go around it, you’ll notice the timing marks on the pulleys. My old man said I was going a bit far, but I figured if you’re going that far, you might as well finish it off properly. 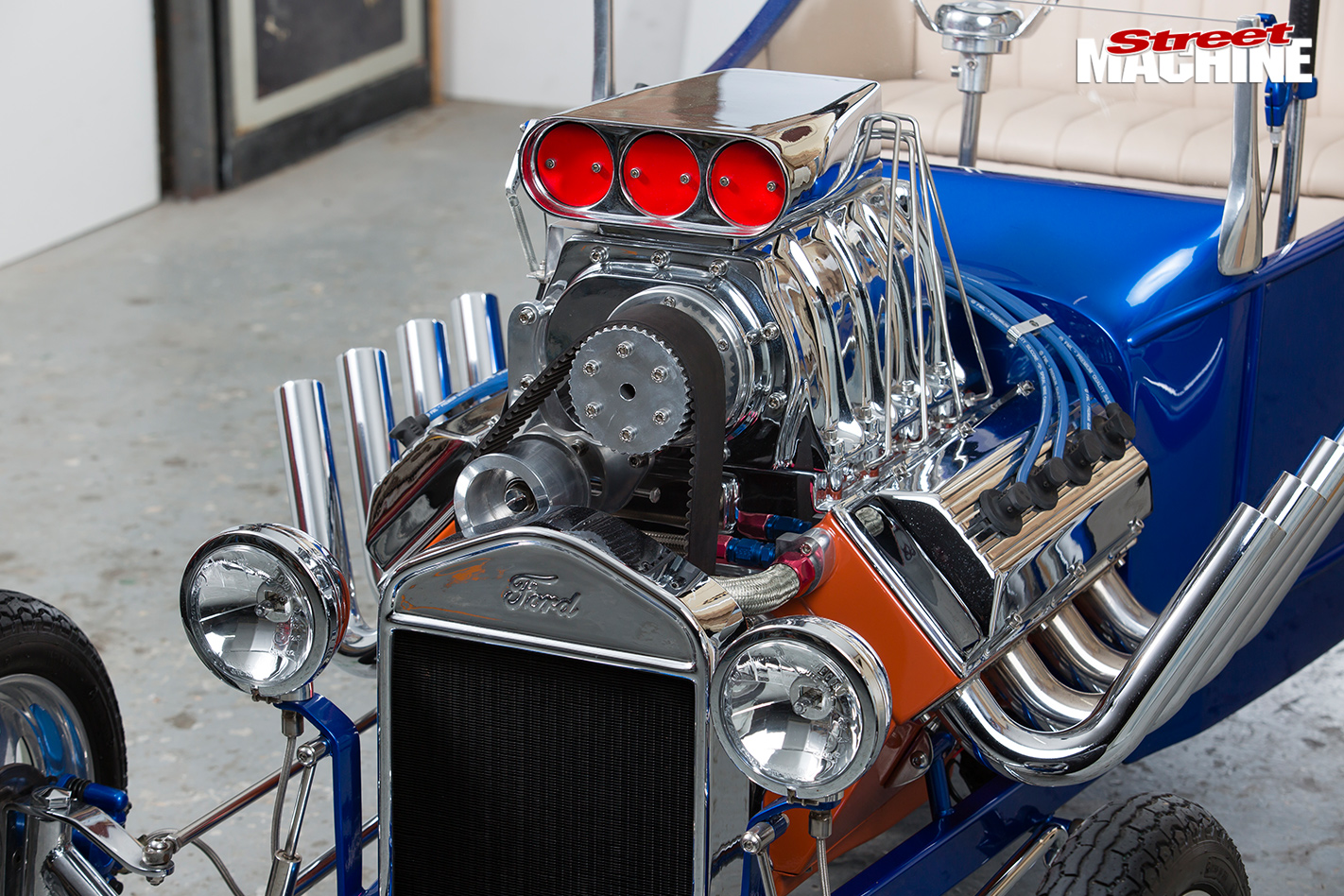 The detail on the blown Hemi is ridiculous, there’s even a blower burst plate and a real radiator, partly so that it looks right but also because Peter might run a water-cooled engine later down the track. The grille shell, blower and rocker covers are all fibreglass pieces made by Peter and then chromed 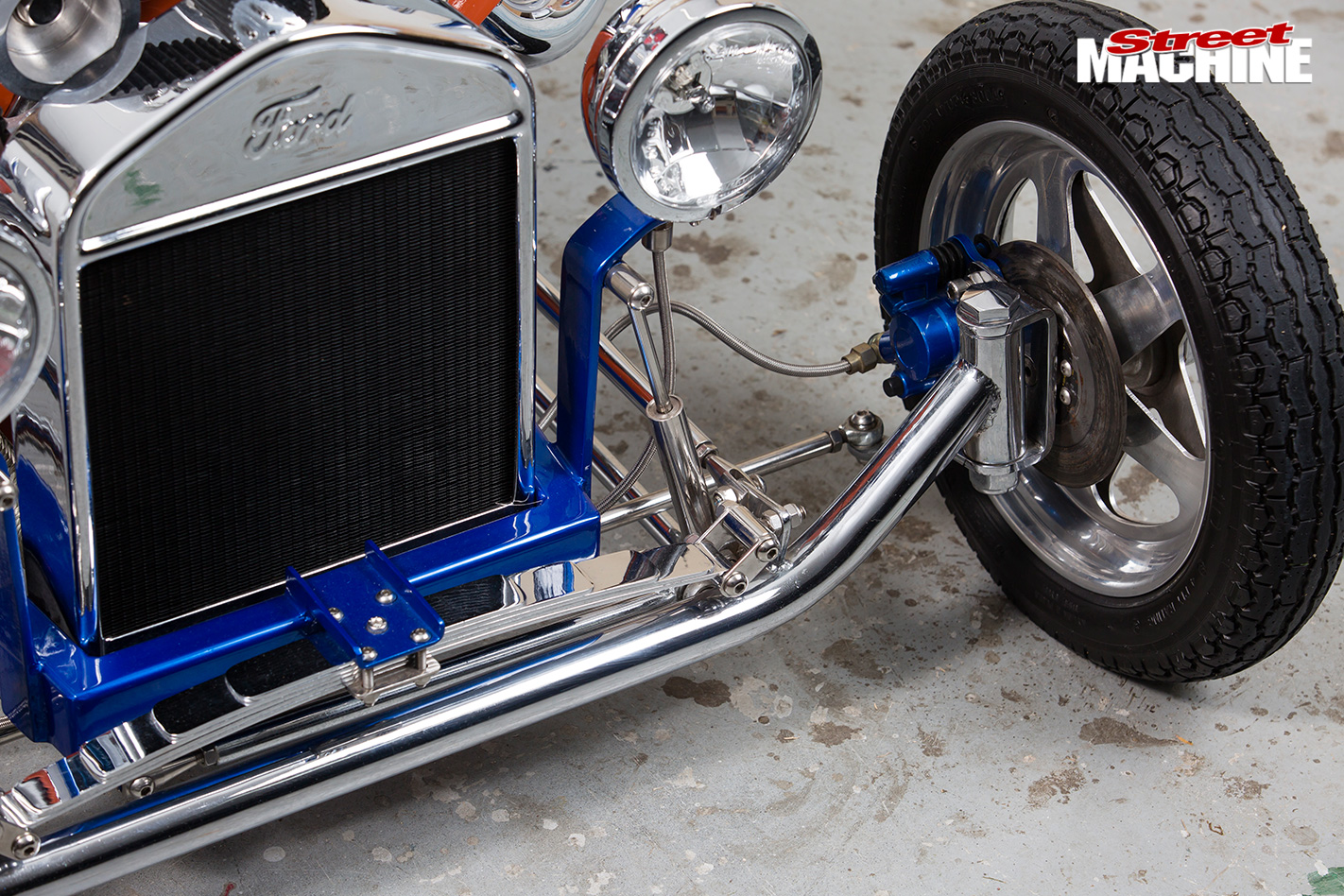 Not all of the junior rods have front disc brakes, but Peter’s bucket has a 125cc Lifan motorbike engine and four-speed gearbox, so it can get up some pace. 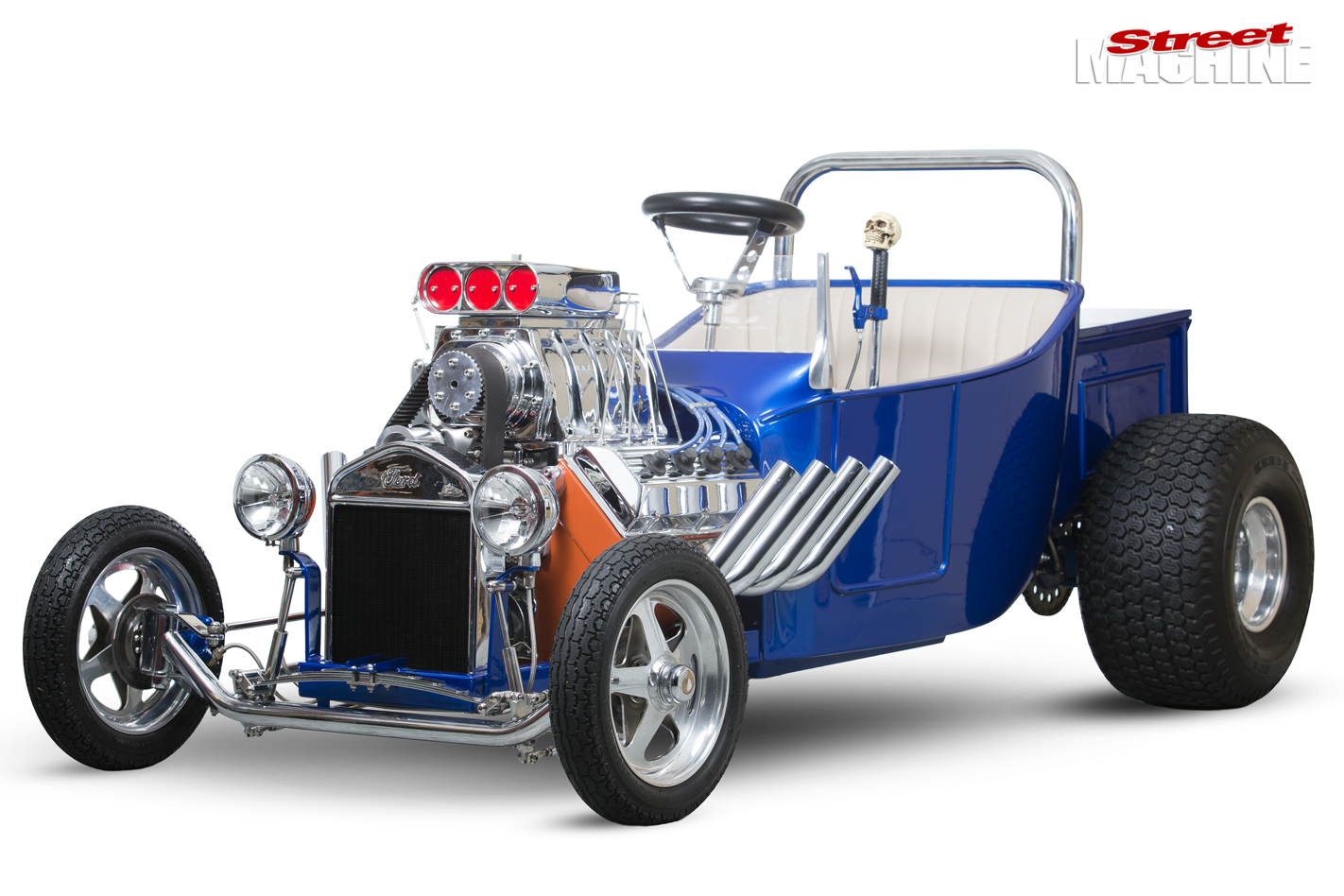 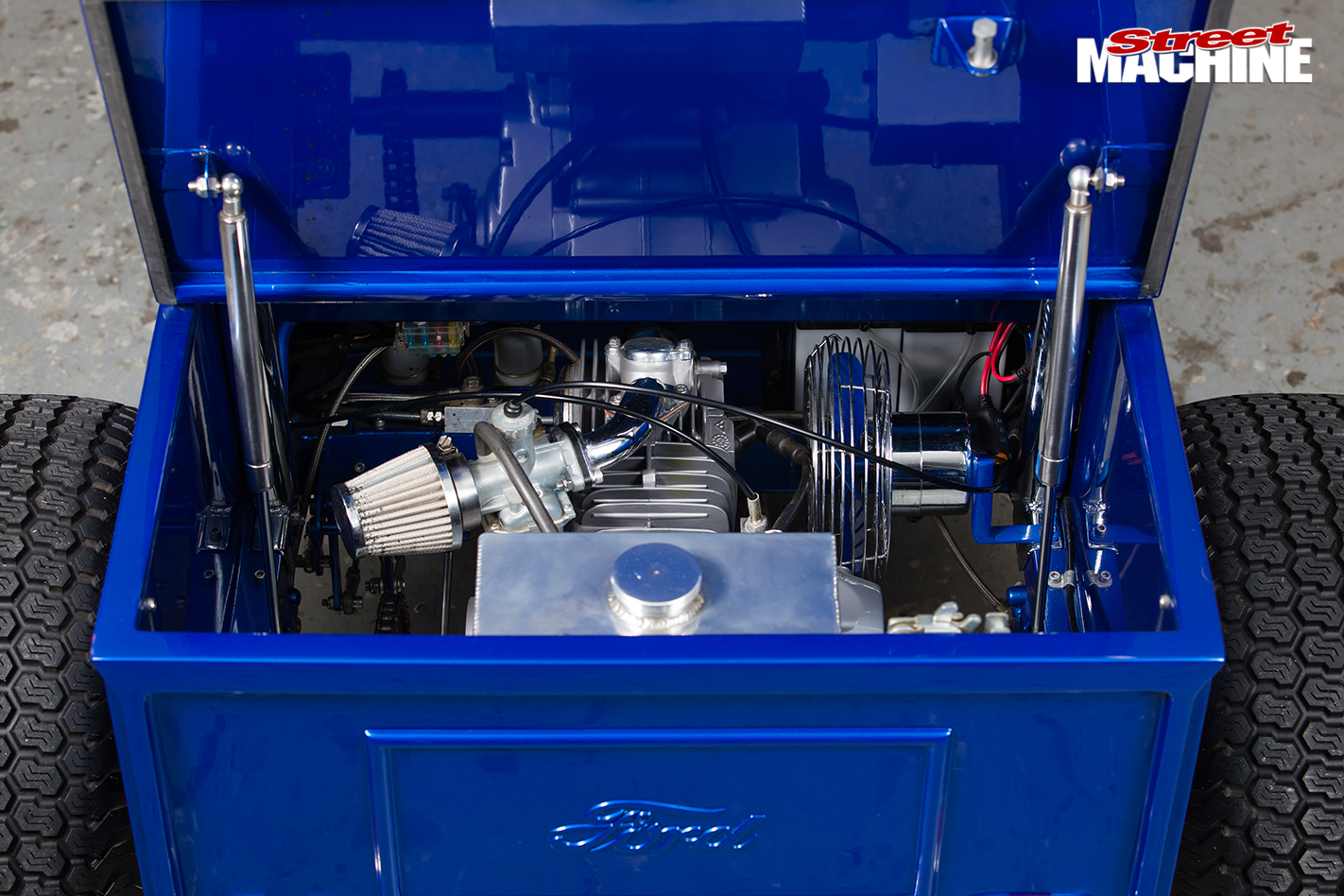 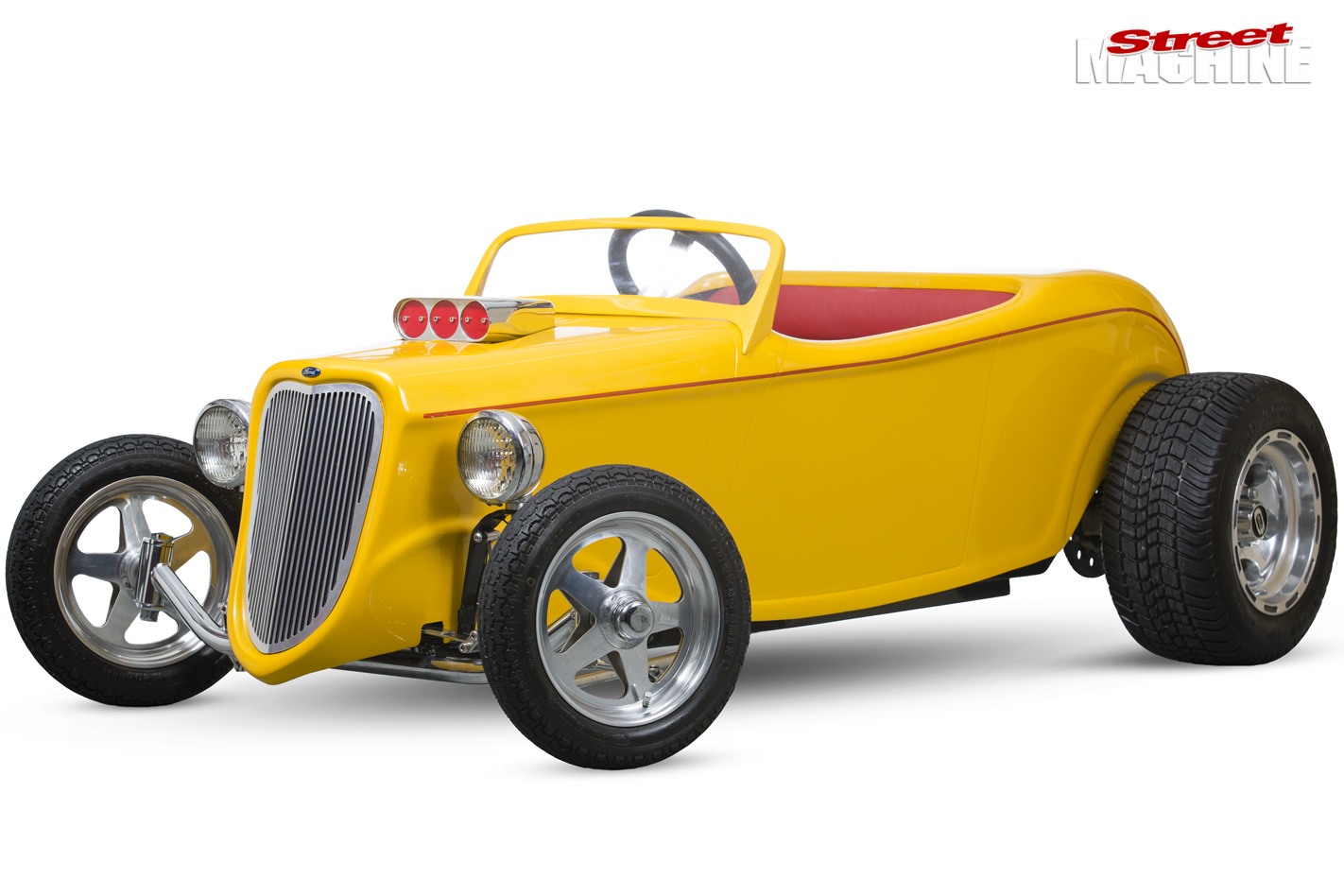 There are three body styles available; T-bucket, '32 roadster and '34 roadster. Peter and Keith originally purchased the bodies already done, but weren't really happy with the proportions or details such as body swage lines, so over the years they have developed their own 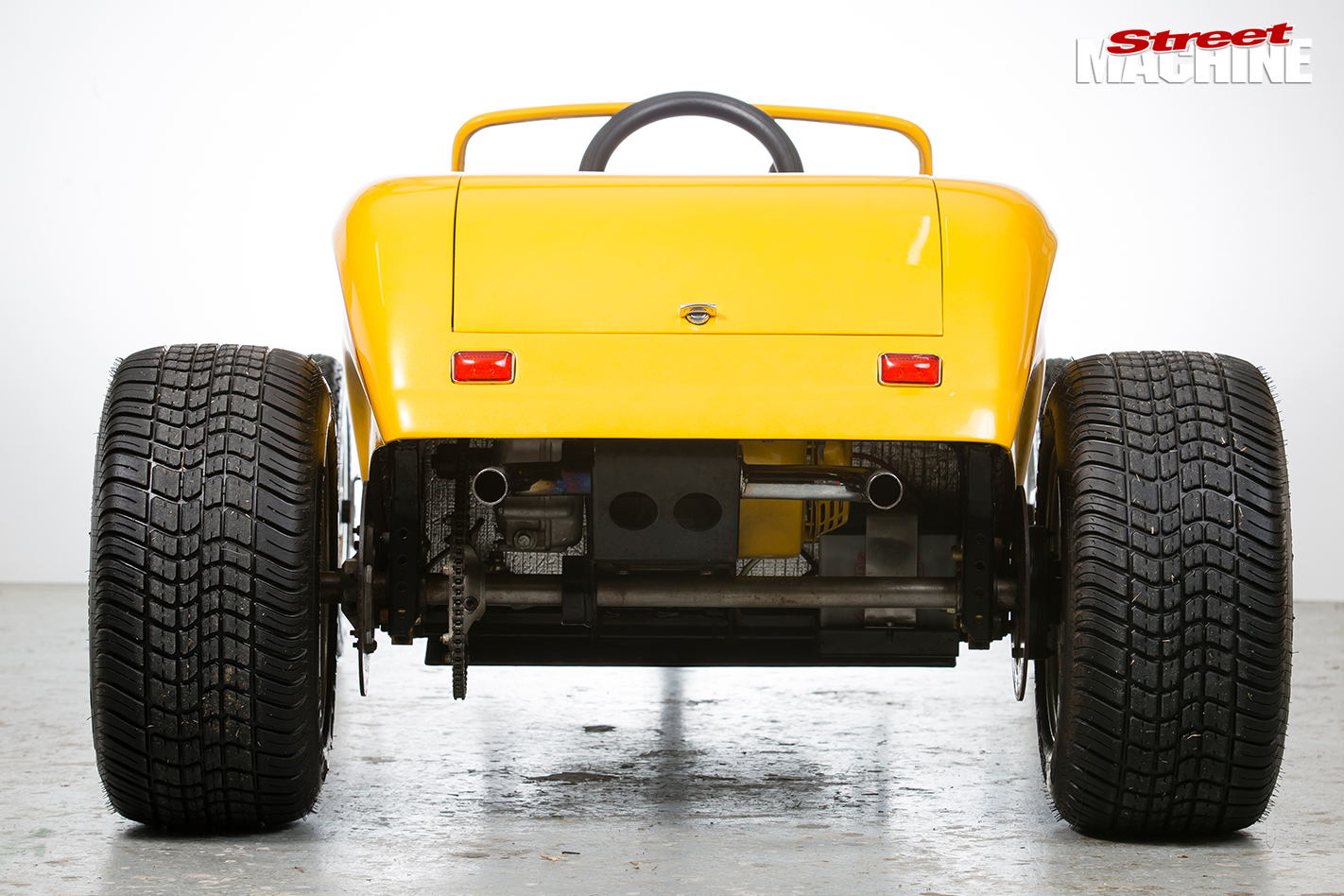 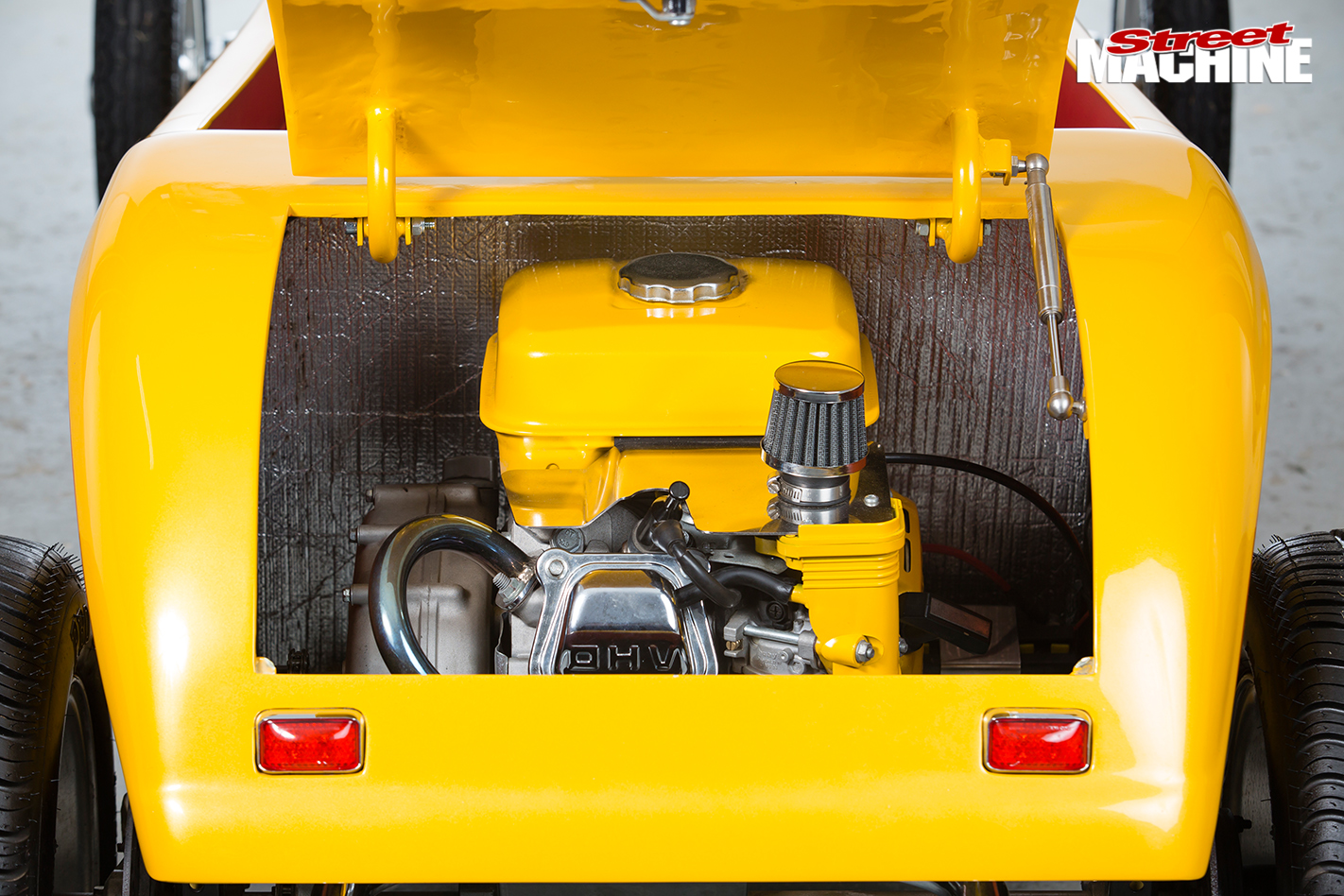 Peter's '34 recently won a trophy at the local hot rod show, not surprising when you see how clean the engine bay is 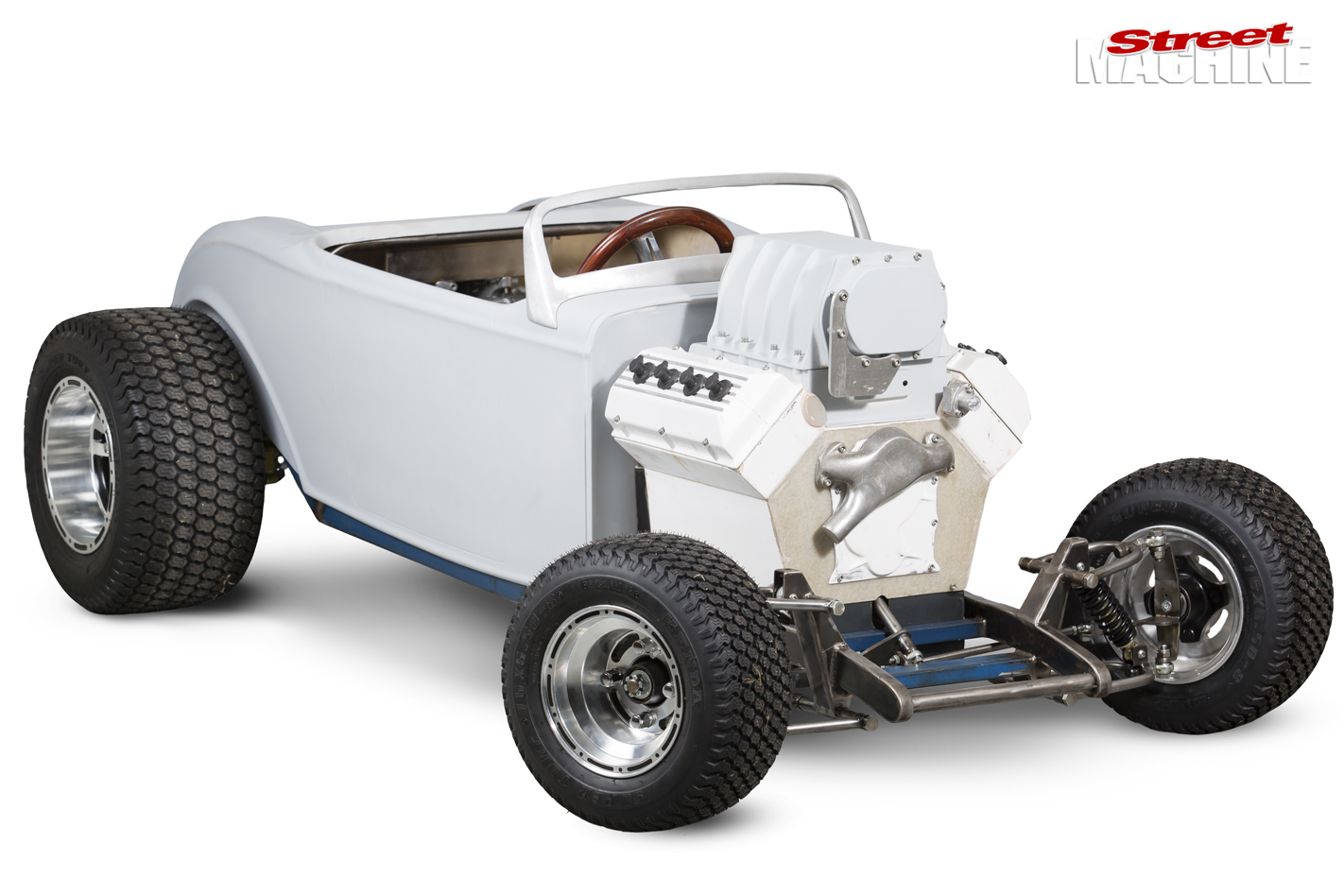 Peter's latest build is this '32 roadster which will feature a similar blown Hemi to the blue T-bucket. The difference with this one is that Peter will be able to slide his 6-foot-2-inch frame into the car and stretch his legs out because the pedals have been mounted inside the engine block 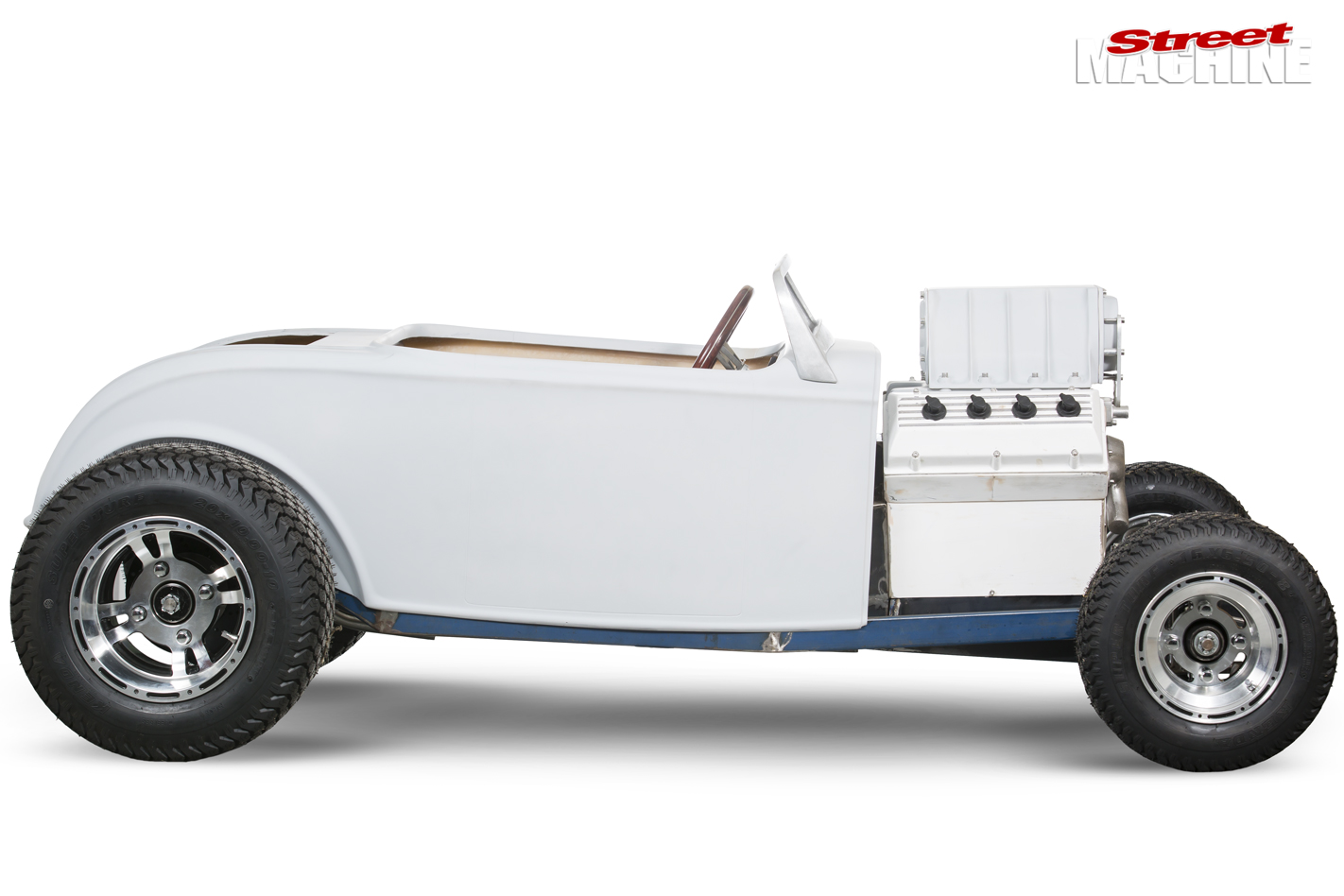 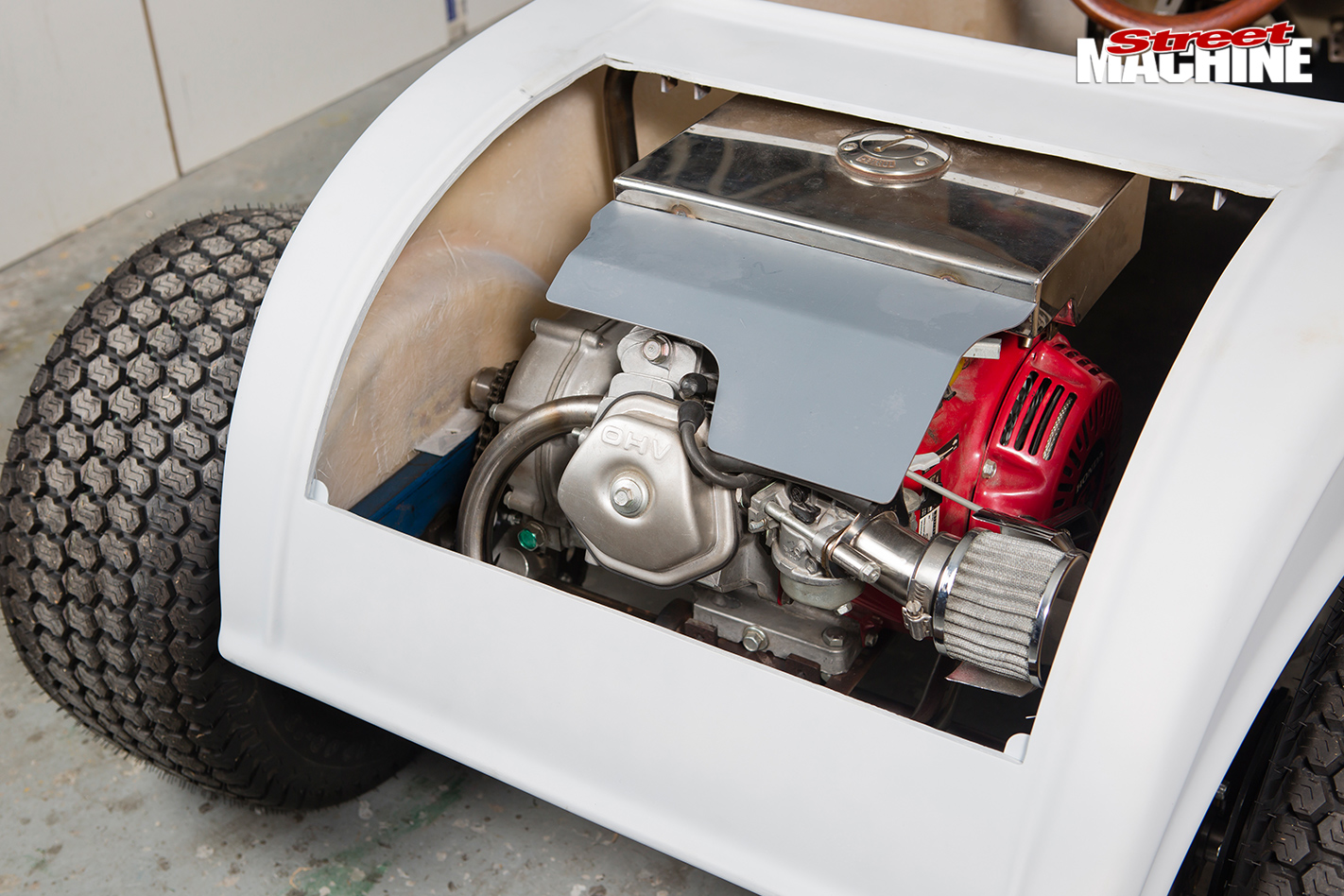 A 6.5hp Honda engine mounted in the rear powers the '32, although some people have built them with front-mounted engines 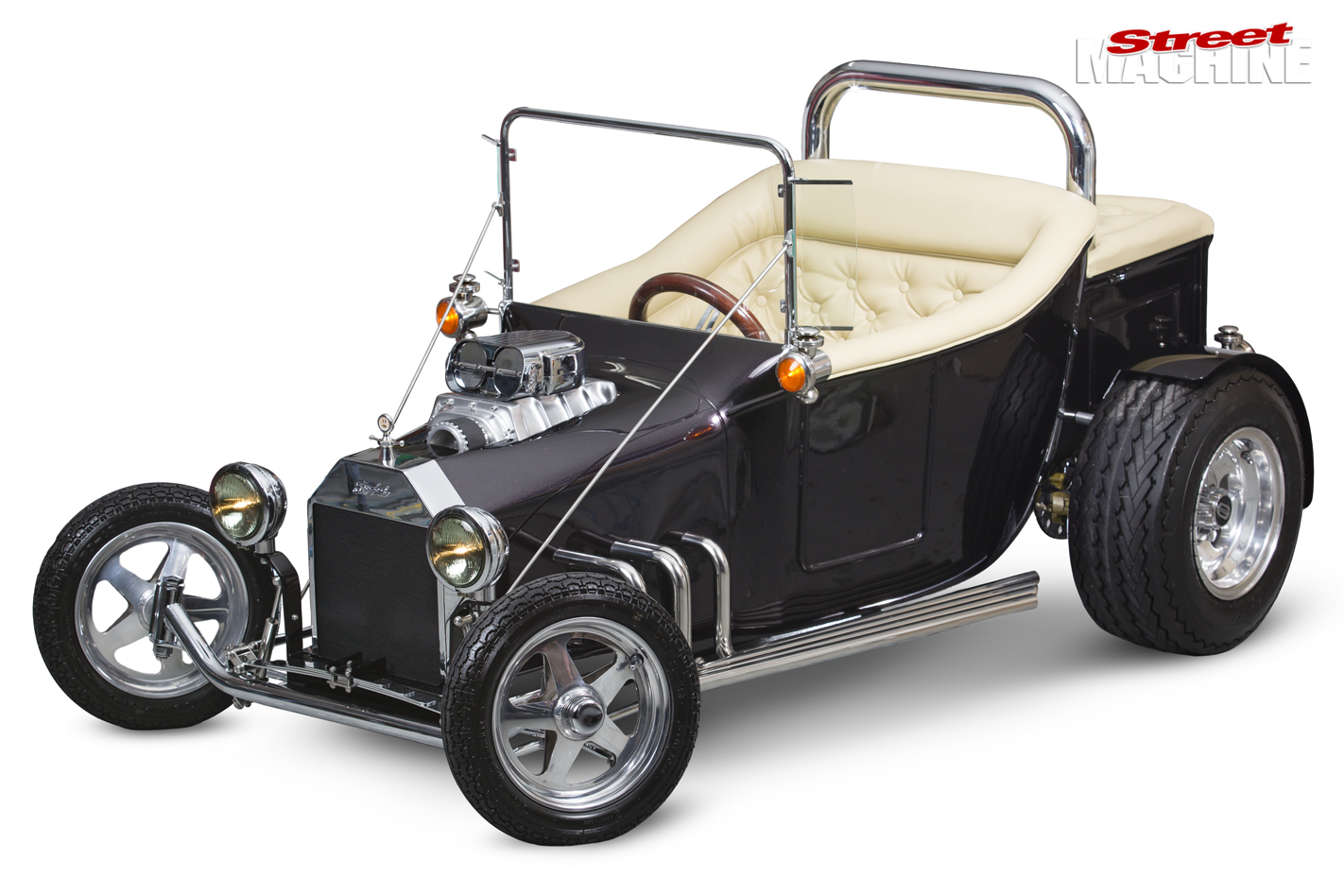 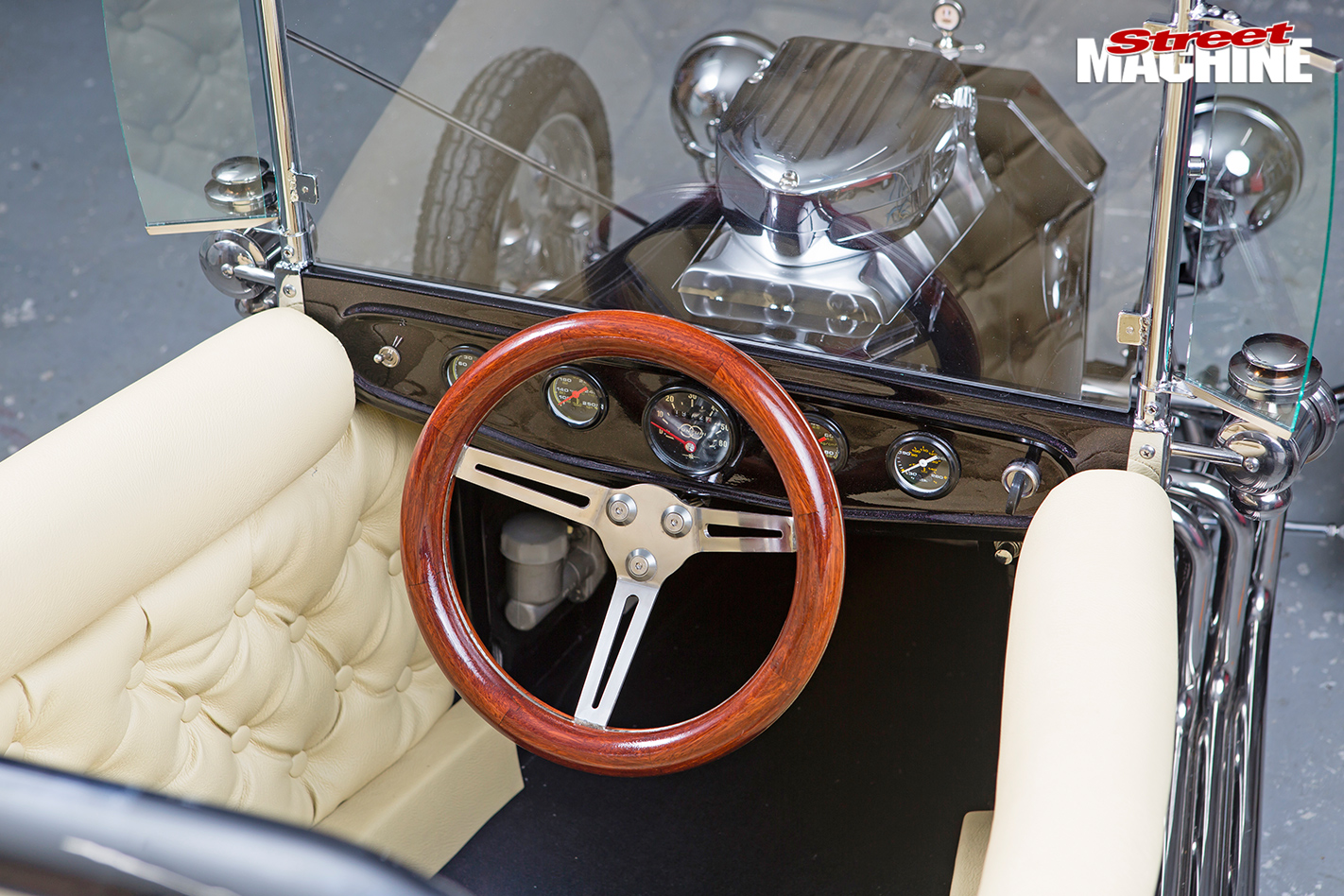 You can just spot the brake master cylinder on the left side of the footwell. Go-kart pedals do the stopping and going and there's plenty of room to stretch your legs out 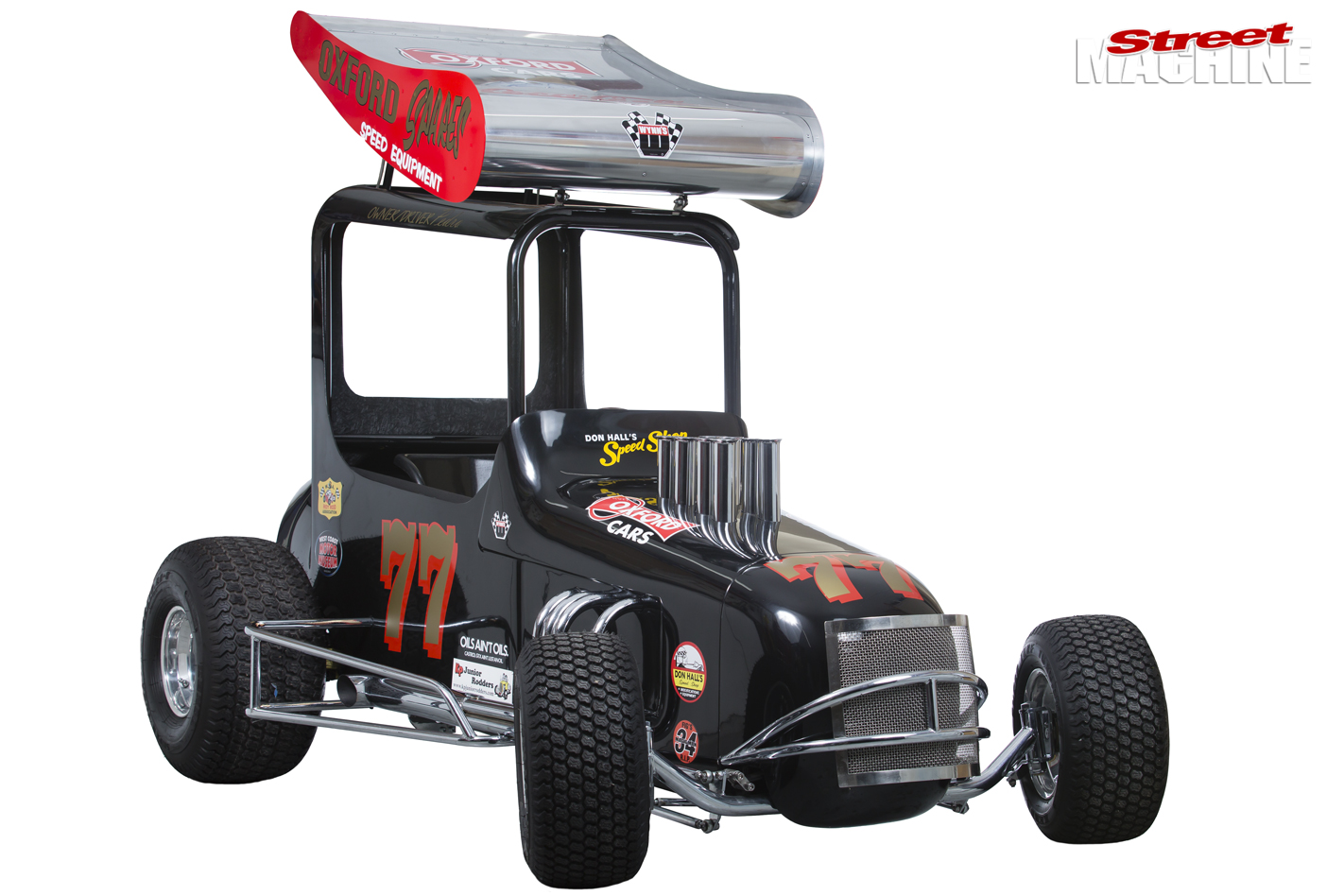 Both of these stunning speedway cars (above and below) are tributes to famous speedcars and were originally built for Peter 'Pedro' Pascoe, a speedway fan and historian who also gets into the full size racers on a regular basis as part of the WA Classic Speedway Association. The #77 super modified (above) has a livery dedicated to the most successful competitor at Claremont Speedway, Alf Barbagallo, in the late-60s and early-70s 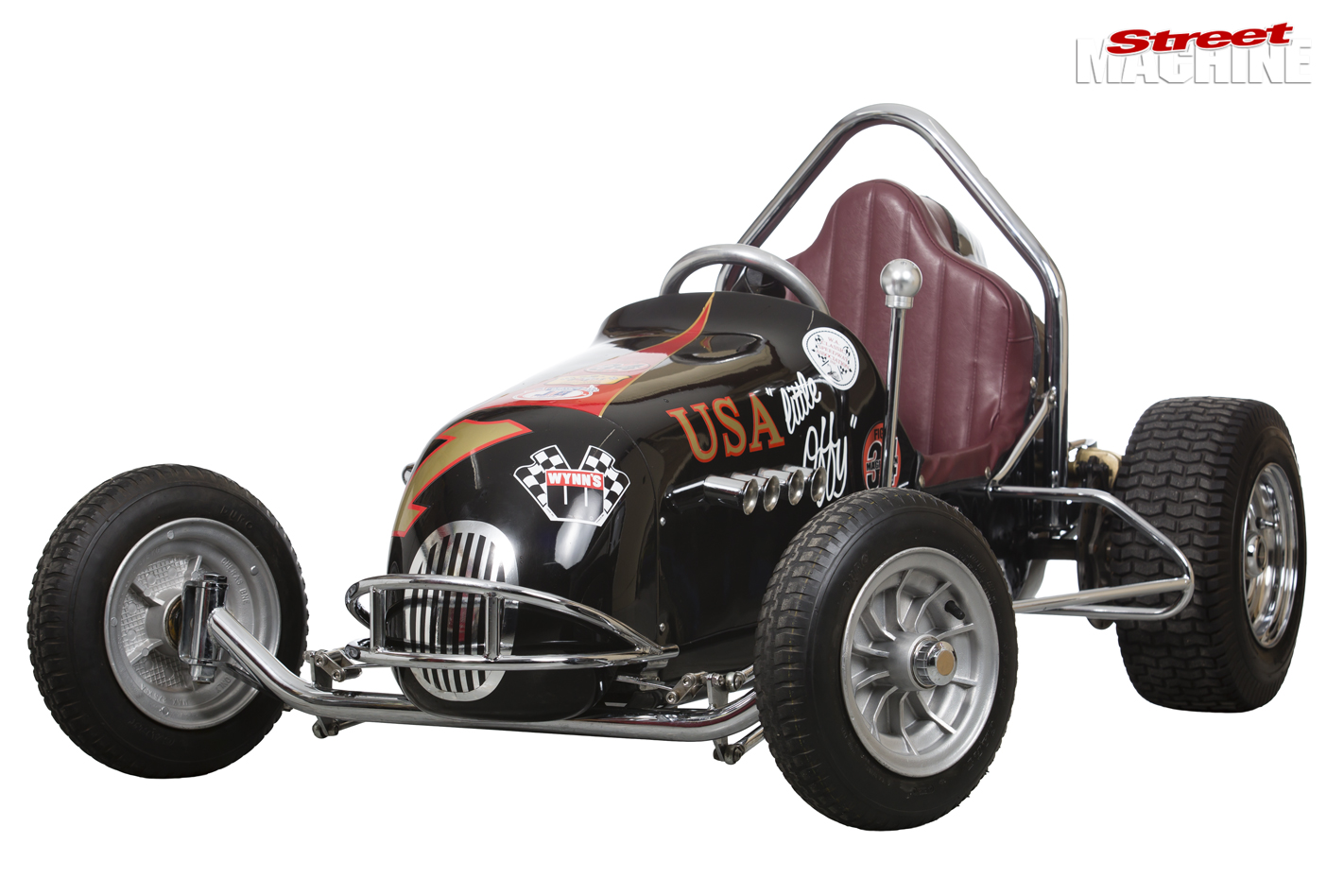 The livery on the #1 'Little Offy' (above) is taken from a speedcar driven by Ronnie McKay, a Queenslander who won the Australian title in 1971 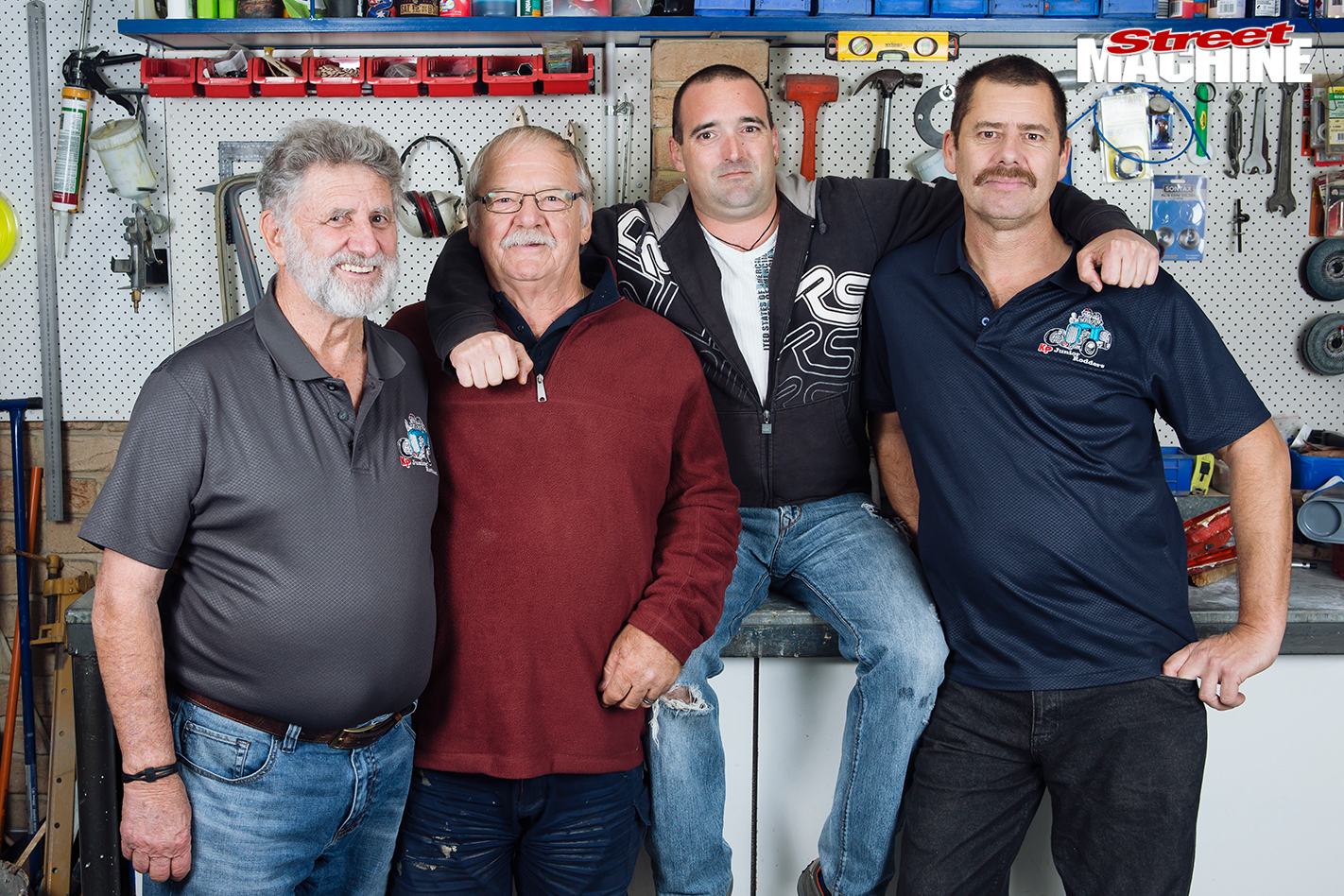 Keith and Peter Hahn flank Mick and Dan who were kind enough to bring up Shyanne’s T-bucket for the photo shoot. The car was five years in the build and somehow they managed to keep it a secret from her, unveiling it at the recent WA Hot Rod & Street Machine Spectacular

If you want to find out more, go to the Junior Rodders Facebook page or check out http://www.kpjuniorrodders.com/. Rolling kits with a body and chassis, but no engine and brakes start from around $2500. For around $3700 they can also build them turn-key for you to the point where it's ready to blow apat for final paint, trim and chrome. Prices will vary depending on which body style and options you choose. 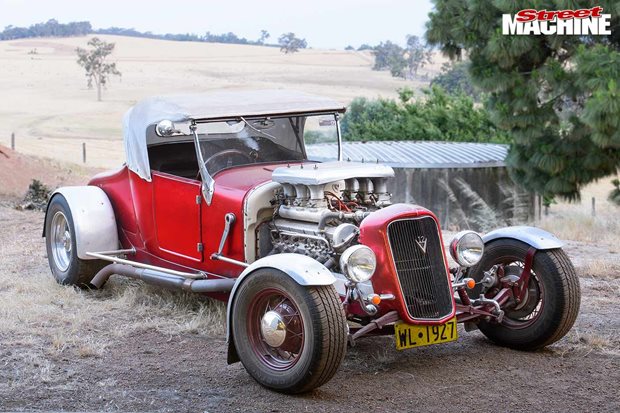