Rex Webster blew our street machining minds back in 1986 with his FJ Holden, then disappeared from the car scene for more than 20 years

He came, he conquered, then he disapeared. Rex Webster's '55 FJ Holden monstered Aussie street machining back in 1986 with stunning attention to detail. We caught up with Rex back in 2011 to talk about his ground-breaking FJ, his other amazing cars, and his return to the drag racing scene after more than 20 years

THE name Rex Webster will probably only mean something to those who spent high school maths reading Street Machine 25 years ago. He was the bloke who turned our craft on his head in 1986, when debuted a blue FJ Holden at Rickshaws in Newcastle.

The car the respected vehicle painter had built with his brother Tony was so exquisitely crafted, so holistic and so finely detailed that it catapulted street machining into another dimension. 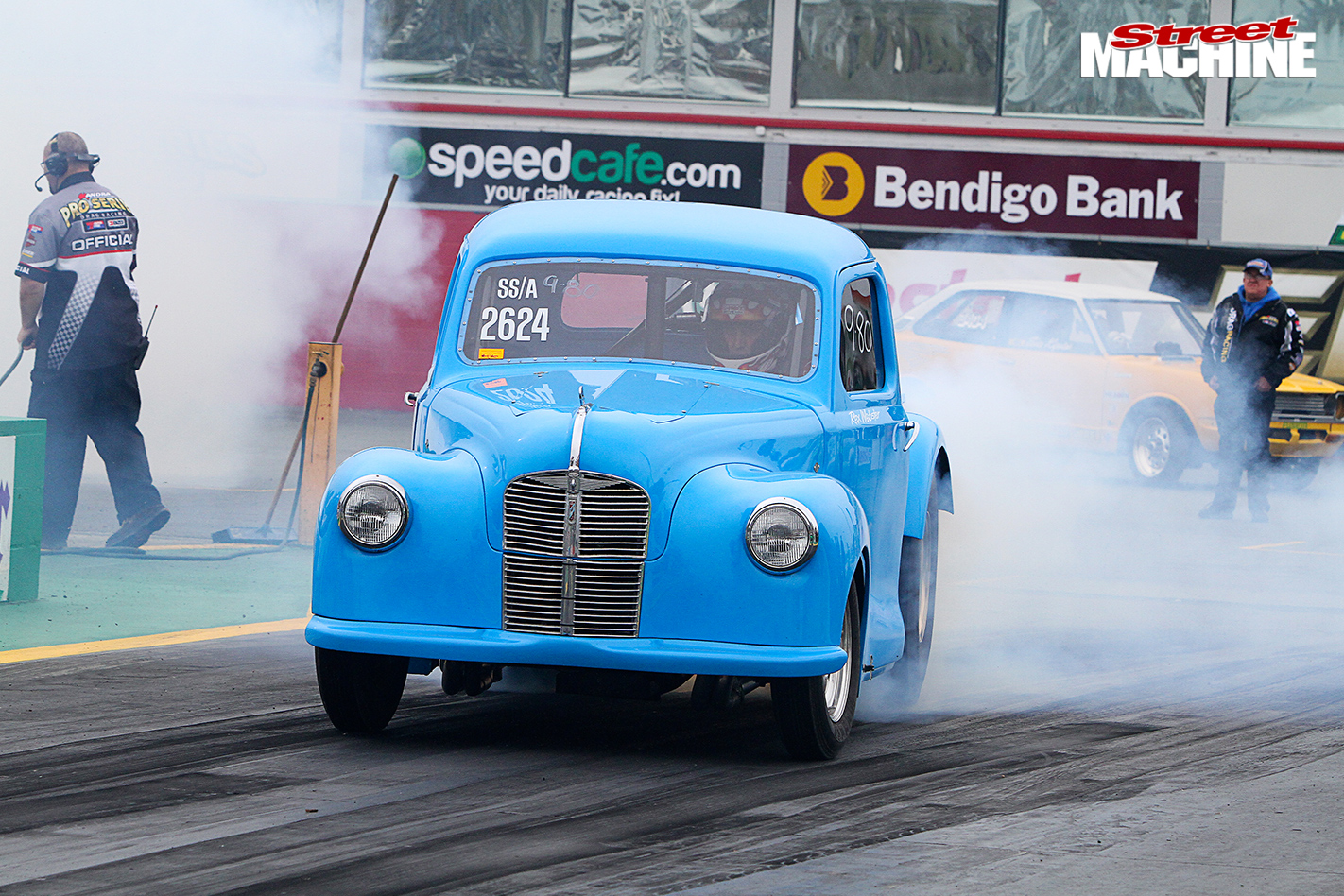 Rex’s A40 has run a best of 9.7 at 140mph. It was originally built in the mid 90s by Mal Gower, who later raced it in Supercharged Outlaws before selling it to Chat Taylor. Rex then did a ground-up rebuild

In an era of fibreglass add-ons, Rex stayed uncluttered. In an era of button-tucked interior trim, Rex pursued elegant simplicity. In a time of she’ll-be-right chromed suspension bits against stone-guard finish, Rex’s undercarriage featured hand-beaten firewall and floor surfaces that were better than most new car – and many show car – exteriors.

He hand machined billet covers for every nut and bolt, he machine-detailed and hand-finished his brake calipers. Each of the carburettors was de-burred and detailed to perfection.

It won Top Judged at the very first Street Machine Summernats in 1988 before Rex took the car to the USA, which was a very big deal before email and discount air fares. 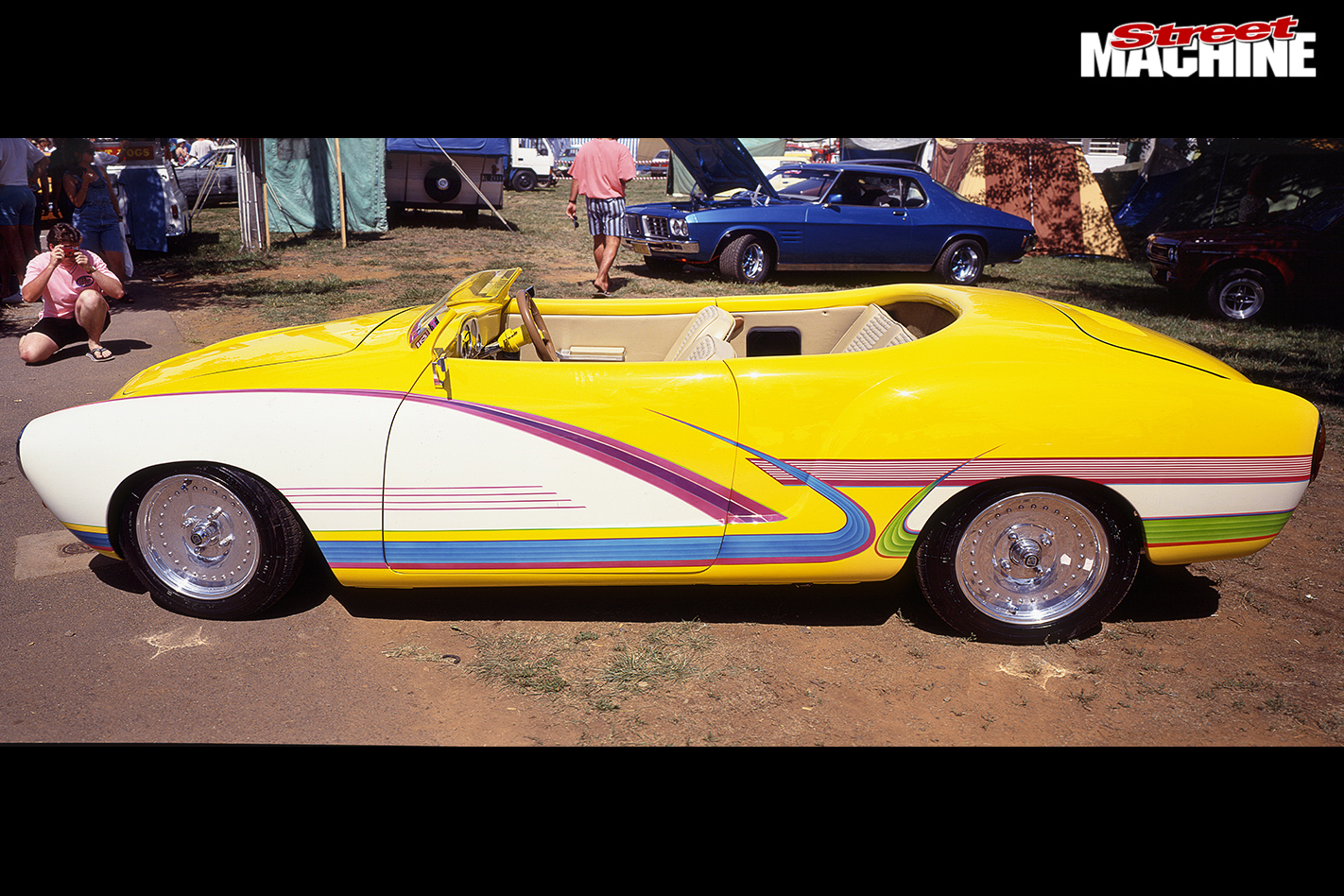 A few years later Rex backed up with the sensational Karmann Ghia. Lidless and low, the Karmann was a riot of colour and while it polarised opinion, it was one of the most complex and finely-executed graphics jobs ever seen.

Others have followed – Howard Astill, Daryl McBeth, Paul Bennett, Gary Myers are some of today’s names that spring to mind – but Rex was arguably the first Aussie street machiner to build not just a car, but a reputation, based on the incredibly high standards of quality, innovation and inspiration evident in his cars.

And then he disappeared. 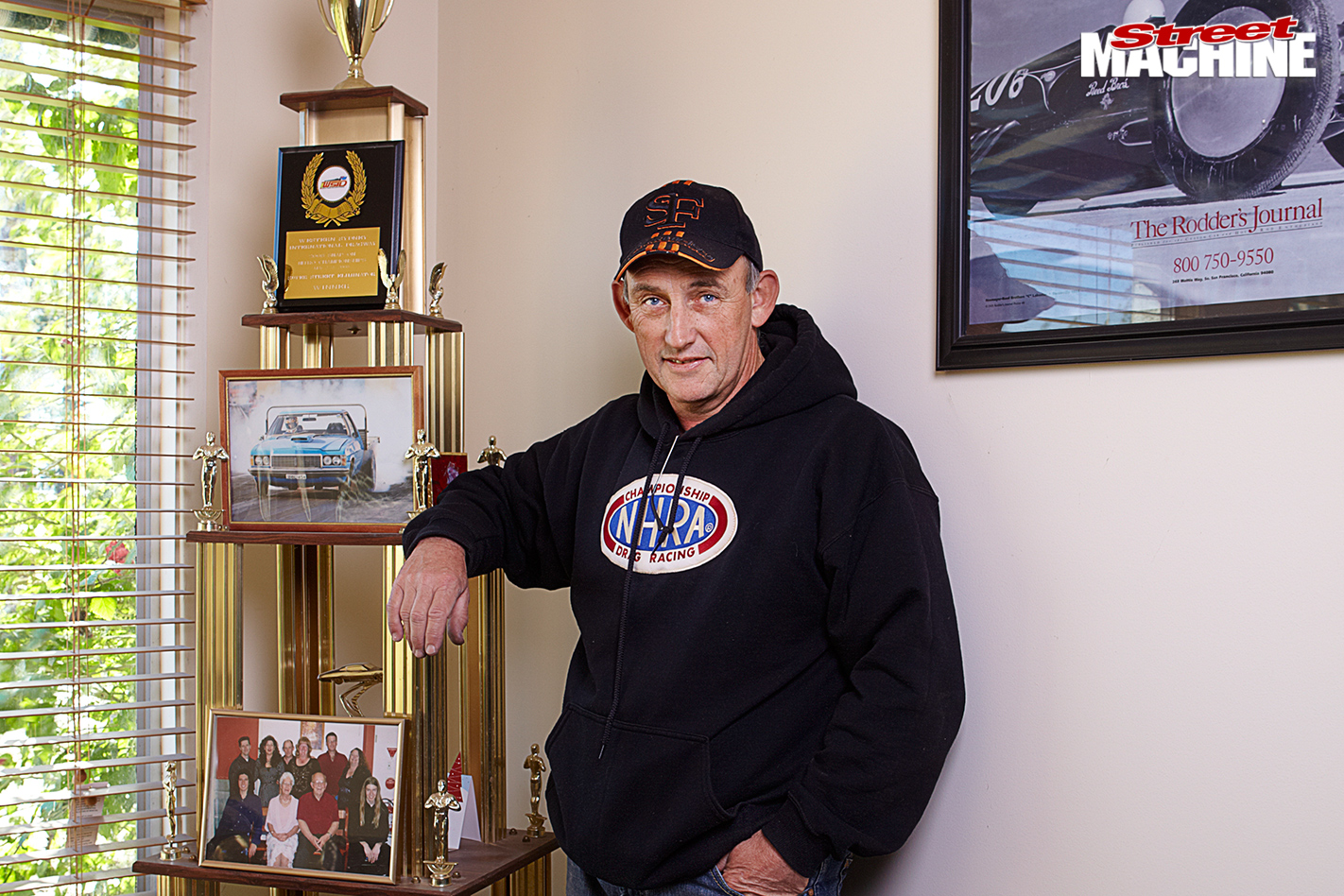 You’d more or less come to that decision before you completed the FJ, yes?

I made more money pushing a lawnmower than I did painting cars. And it gave me a lot more time to finish the car [FJ].

You do know that you were an inspiration to a lot of people.

Yes, I know. I remember one bloke in particular, Ron Barclay. He really got into the detail of it. Without a word of a lie, he spent three days looking at my car at the Melbourne Hot Rod show. I think that was in ’87. I don’t think he left my stand. I think plenty of people picked up on most of the mods that we did, but he picked up on every little detail and modification. Other people looked, but they didn’t see. 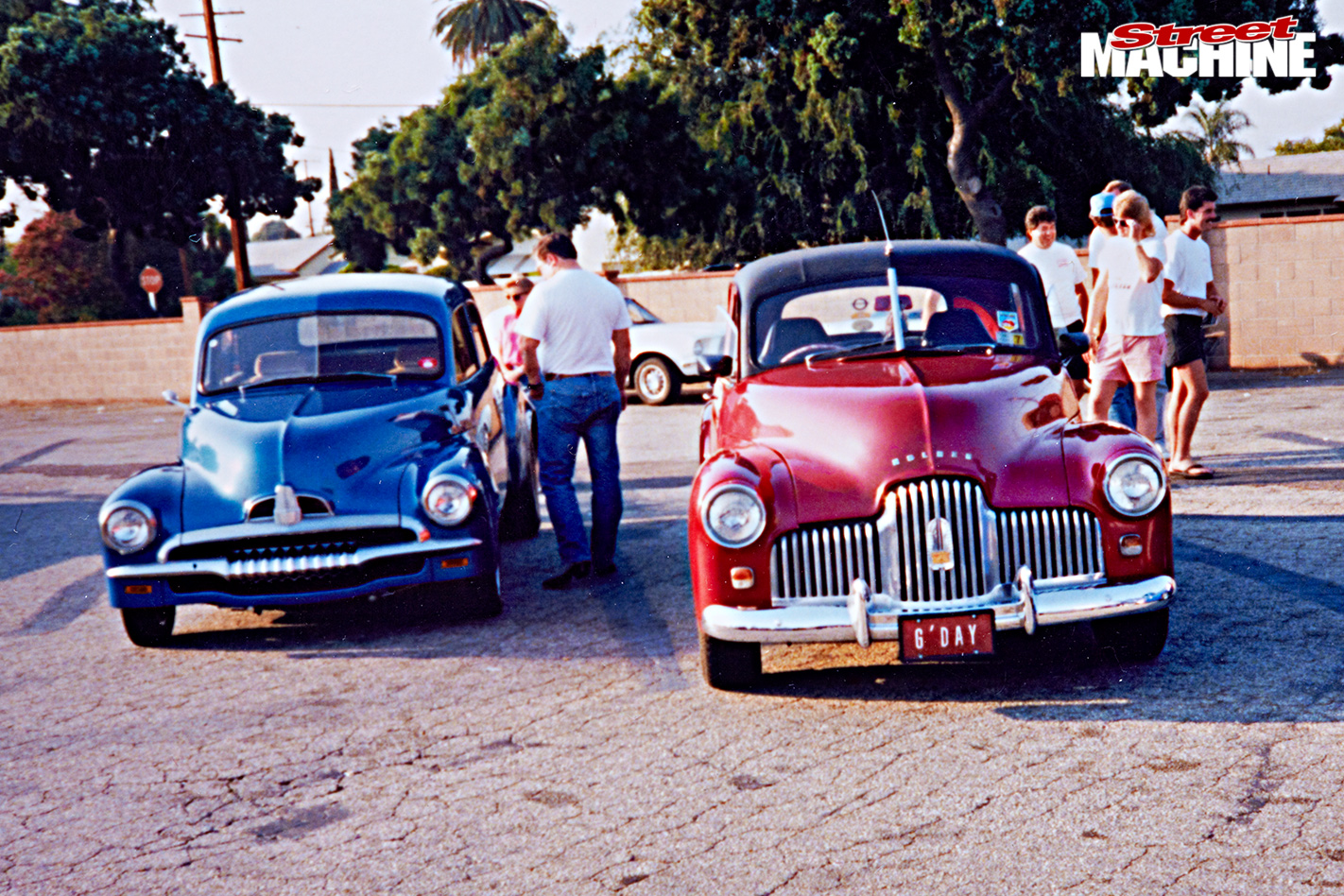 The FJ is regarded as ground-breaking. What was your mindset when you built it?

That’s easy. I’m a painter and I wanted to do the best finish I possibly could – a lot of painters are like that. We [he and brother Tony] were doing a lot of shows. It was just a matter of doing the best we could with our own cars.

You didn’t do the FJ for fame and fortune?

No, not really, that wasn’t the aim. We weren’t looking to set the world on fire.

Yes, I suppose we did. But really we did it for no other reason. 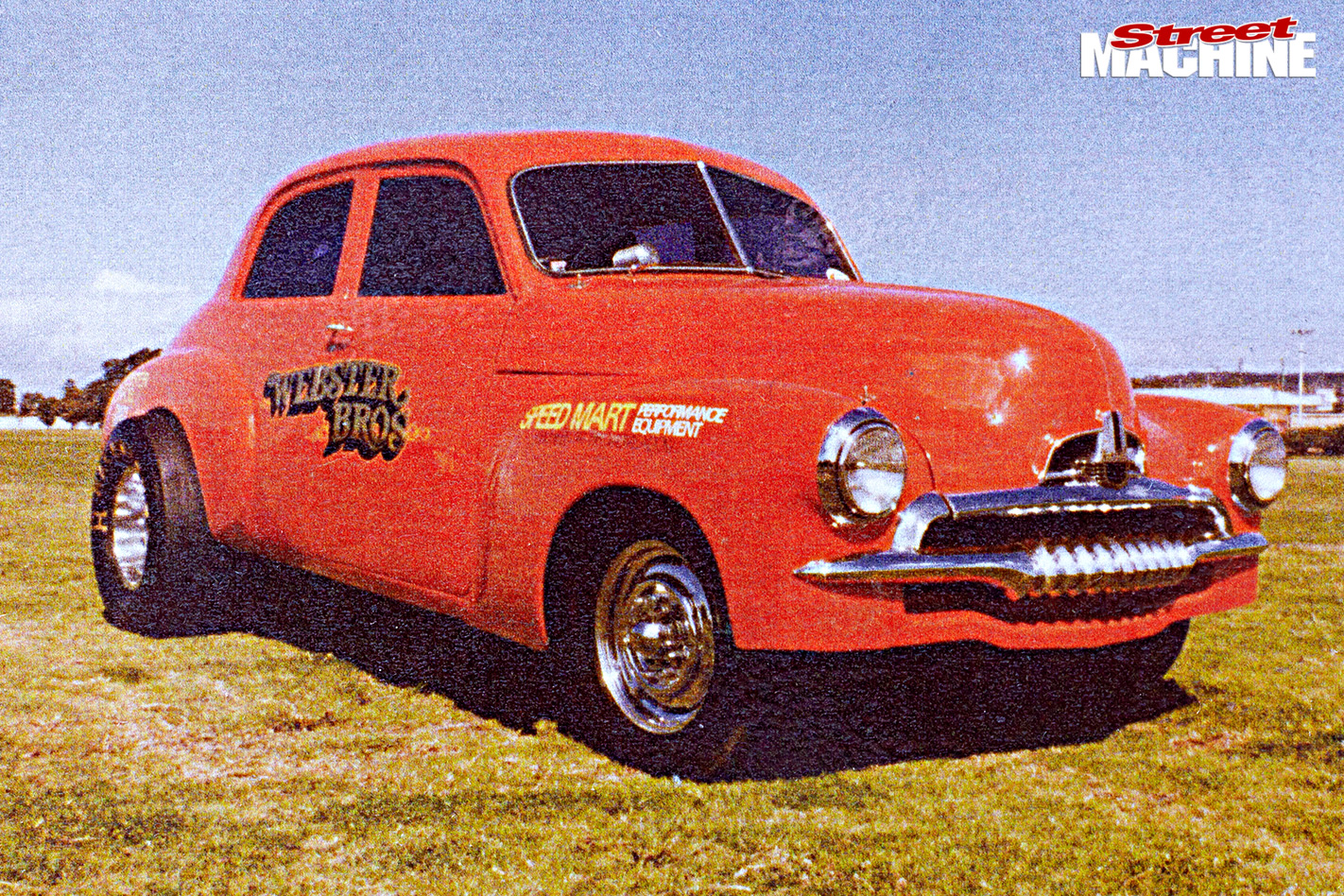 The Webster Bros FJ in 70s drag spec. Note the car had already been converted to two-door post format – and dig the rubber sticking way out the rear guards!

You made sacrifices to build it, you practically lived with it.

It took five years to build. Every car person that you talk to will say that how things start out and how they end up are often two different things.

You went to the USA after that.

I always wanted to go to the States. Any car person gets a lot of inspiration from America. It’s the car culture. I thought it would be a cool idea to take the car with me. One of my aims with the lawn mowing [business] was to make it into a saleable item, that way I could get enough money to take [the car] over there and do some shows, see what happens. I didn’t want to prove anything to anyone – I had a car that was showable, so let’s take it and show it. That’s all there was to it. I’ve heard so many theories from other people as to why I went, but there are no theories. I just wanted to go. When I got there I had $800 in my pocket and no real plans. We’d been in contact with a few car show promoters before we went and when we got there, the first thing I had to do was find a job. I worked for Bellflower Harley for three months doing their second-hand stuff and for Fat Jack Enterprises. We did a lot of work for Boyd Coddington. Fat Jack was respected in his own right, but being only a couple of blocks from Boyd, he only saw overflow work.

What we do here is totally under-rated. There’s no apprenticeship scheme there [in the US] as there is here, so the trades are different. You might see some beautiful work but in general there isn’t the formal training. The smash shop work compared to here is really rough.

We see that here sometimes with imported Mustangs.

Yes. But the biggest thing with the States, and why they build some really good cars, is they don’t have many restrictions placed on them. What I mean by that is with registration. There’s no engineer [modification] scheme so you can cut ’n’ shut – do anything you imagine. Over here, it’s like, ‘Oh no, you can’t do that or that or that,’ And that controls people’s mindsets. Over there, and this is something that was instilled in me by Fat Jack, it’s do whatever it takes. 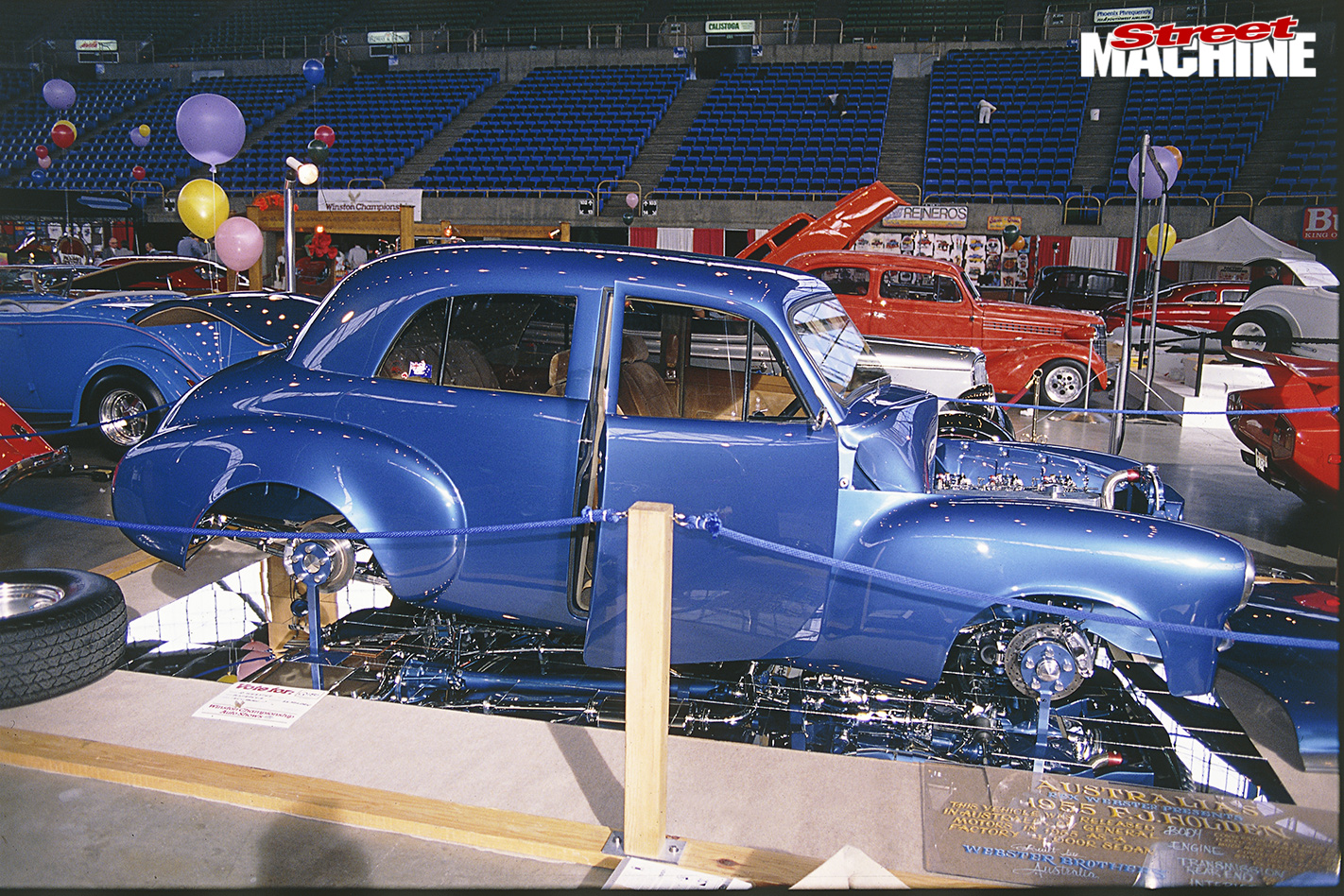 And you showed the FJ.

I found out about a few car shows through the old mates network and just started going. When I went to Oakland Roadster Show it was the 40th year and it was two shows in one. It was also the Grand Final of their Showcars Series. So, there were the 20 best cars in the USA and, no word of a lie, my car would have been top 10. What I’m trying to say is their top cars are good, but the average car isn’t. I’m not a big fan of showing a car over and over and over. I did one year of showing [the FJ] here and one over there. When I brought the car back the blokes at Motorvation in Perth, Bam Bam and Tim, wanted me to display it over there because it hadn’t been seen by WA enthusiasts. I agreed to do that.

That’s a while ago now.

Yes. The last show I did in the US was in 1989. I cut the whole car thing and went in a totally different direction. 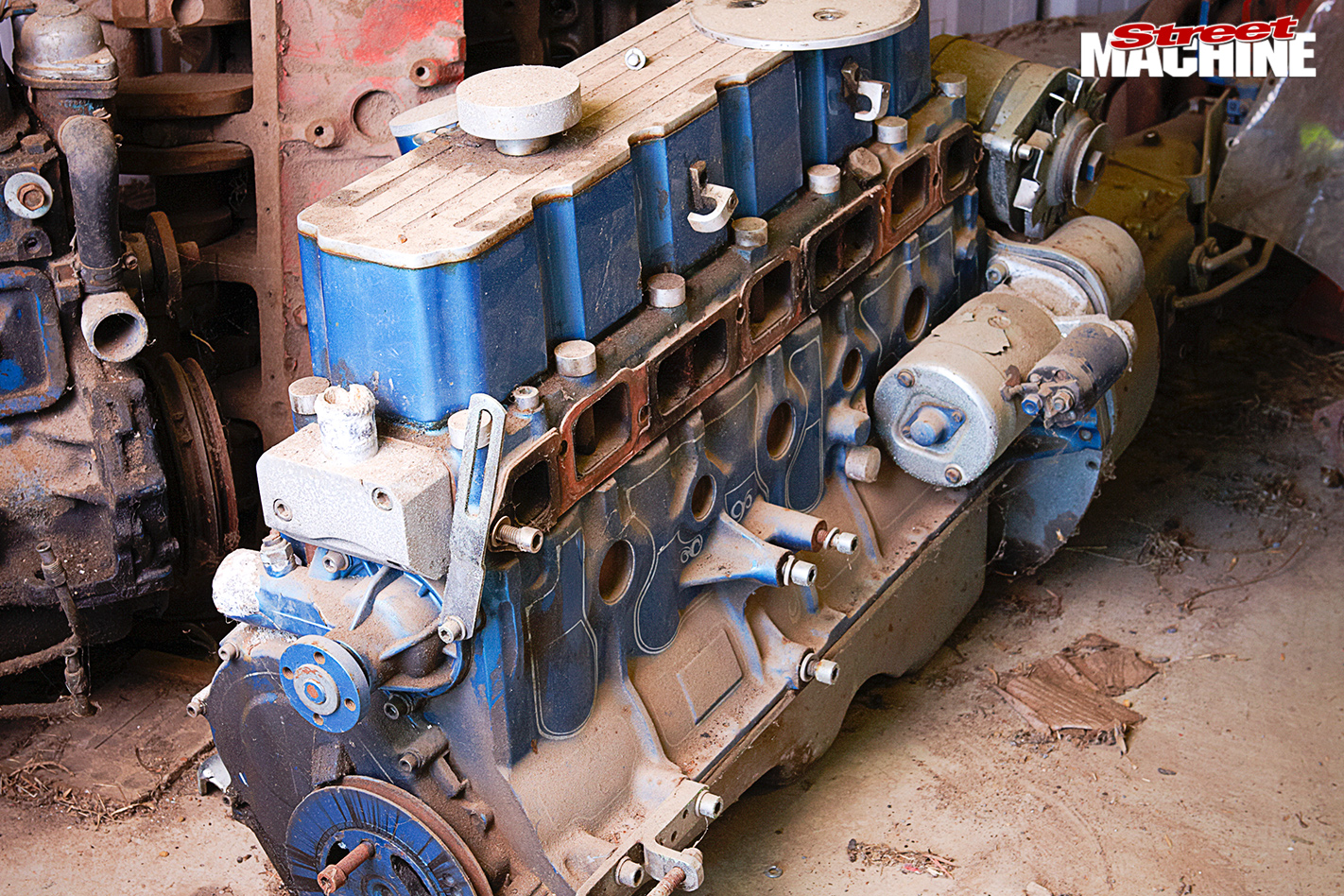 Nup. Actually, I went to a couple of Summernats.

EFIJY. To me a car is about a whole package – impact, style – not just about how it judges. As far as the quality of workmanship you can see, and the overall style, that thing is awesome. Remember I mentioned, ‘whatever it takes’? That’s what they’ve done with that car.

I build horse floats and have done for 17 or 18 years now. It’s a lot easier getting money for one of those than it is for quality paint. I’ve been out of the car scene for a long time and the people I associate with now don’t know what I did. So, now I get the, ‘Hey, are you the Rex Webster that built that FJ?’ Even one of the scrutineers at Eastern Creek asked me, ‘Hey are you the bloke who built that Karmann Ghia?’ So yes, I get those questions because I’m back with car people. 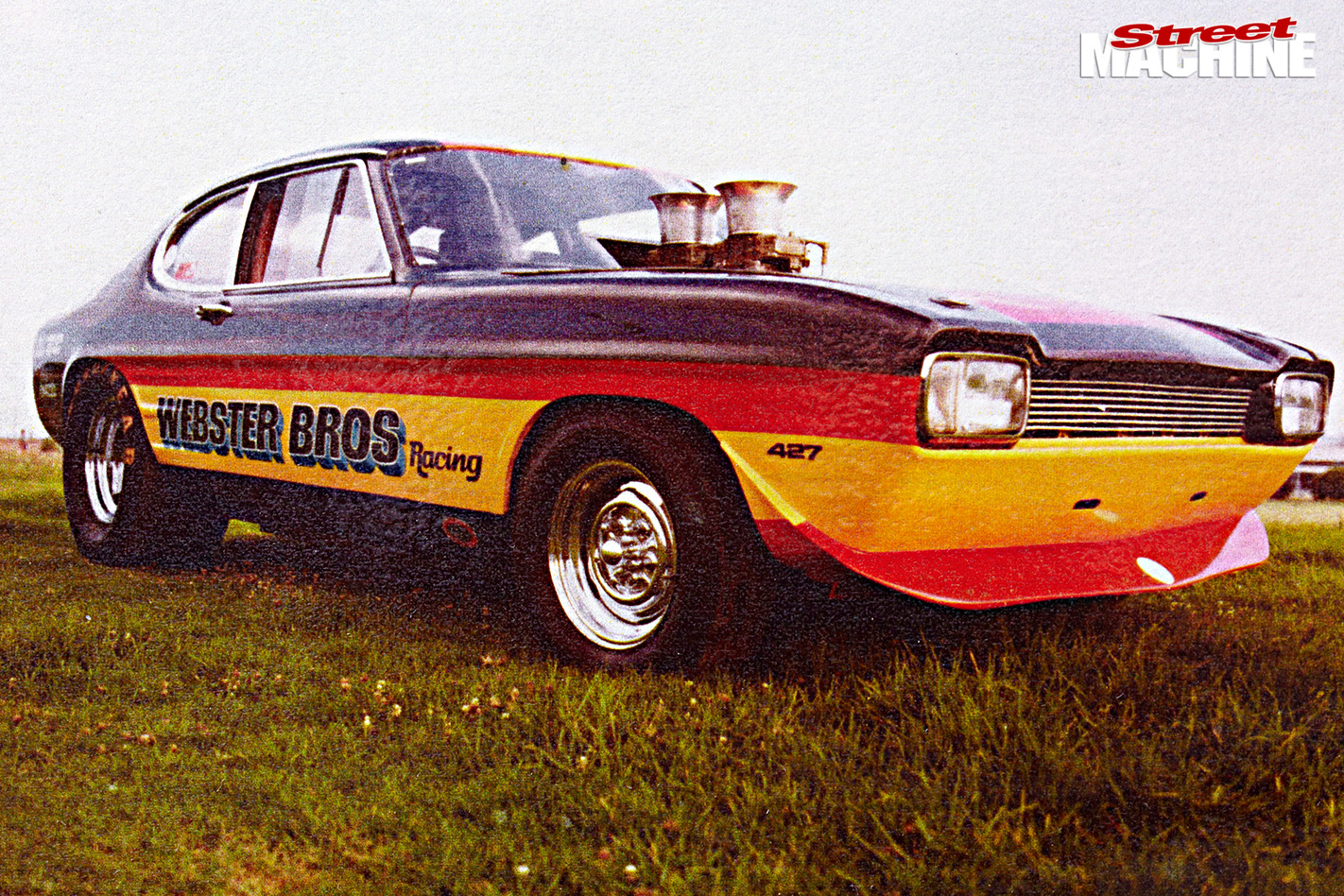 After the FJ, the Websters built a 427-powered Capri that ran flat 11s in the early 80s

Drag racing. I bought a Holden tonner with a big block a while back. The adrenalin made me do it. I bought an Austin five years ago and it’s been raced for the last 12 months or so. It runs 9.7s at 140mph. It’s quite well behaved, not naughty at all. Nothing flash, but better than the old Capri! That only ran 11.0s at the time [early 1980s], because we couldn’t afford to stop it breaking. Every time we raced it, it broke. 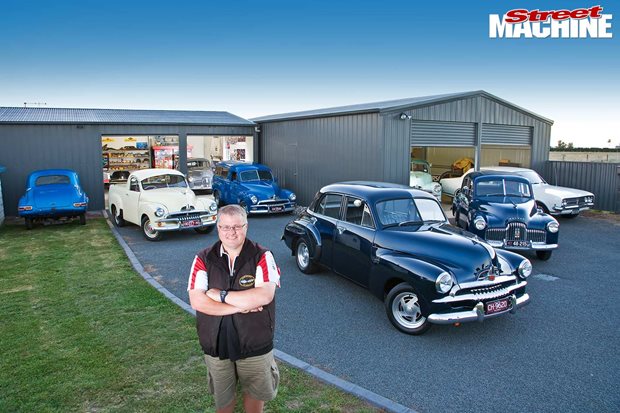