It has the hardware to tackle the track, but Leigh Haintz's 1970 Holden HG Monaro has been built for cruising

LIKE a lot of us, Leigh Haintz got a fat one for tough street machines when he was a teenager, promising himself that one day he’d own a car like the ones he saw cruising around his hometown of Geelong. And, also like many of us, it took another decade or so for the ambition to become action. 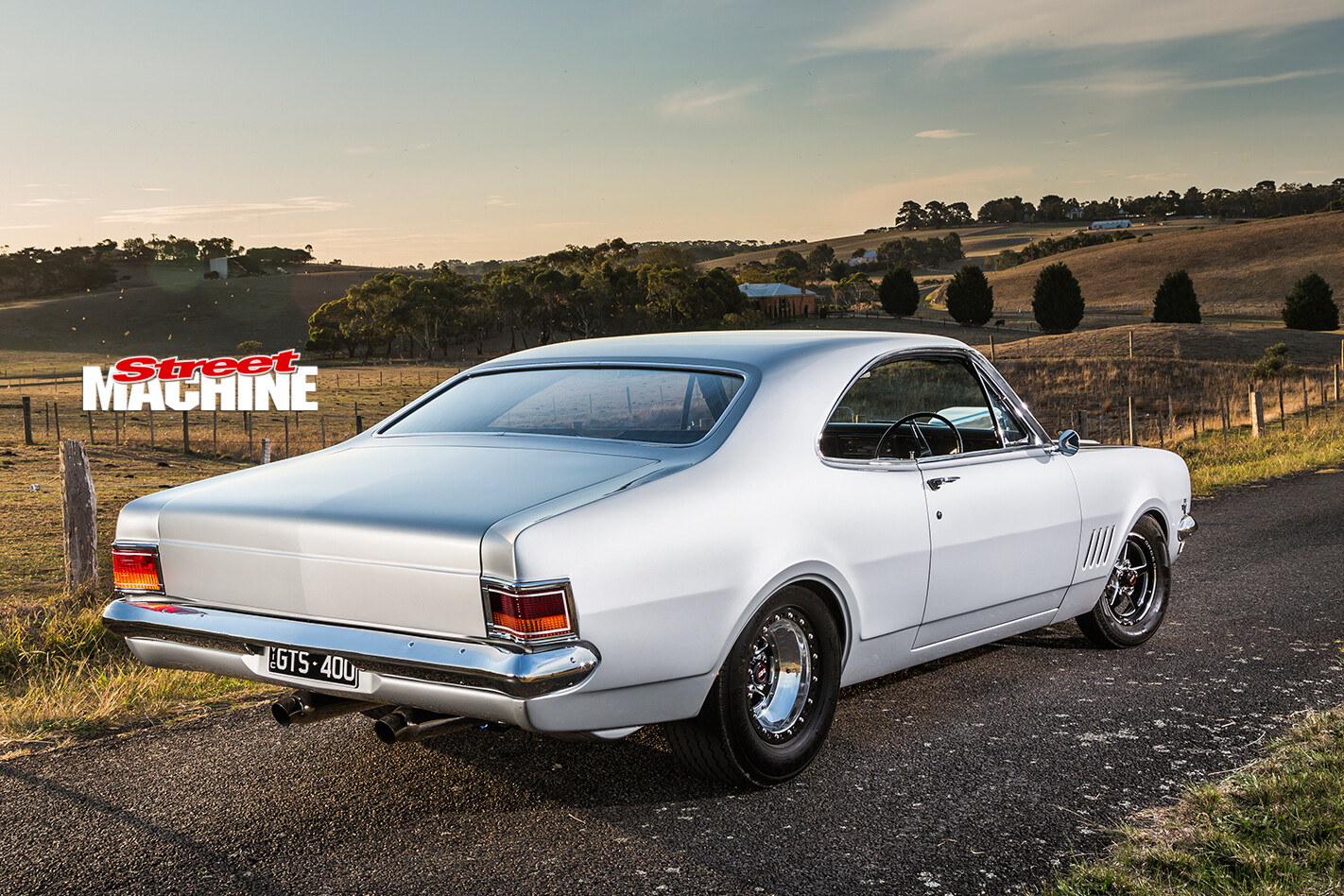 “I bought it locally off a bloke,” says Leigh of this HG Monaro, which he picked up 14 years ago. “It’d done a lot of street cruising and some racing but the owner had let the rego lapse and he’d put it in a shed for nine years. 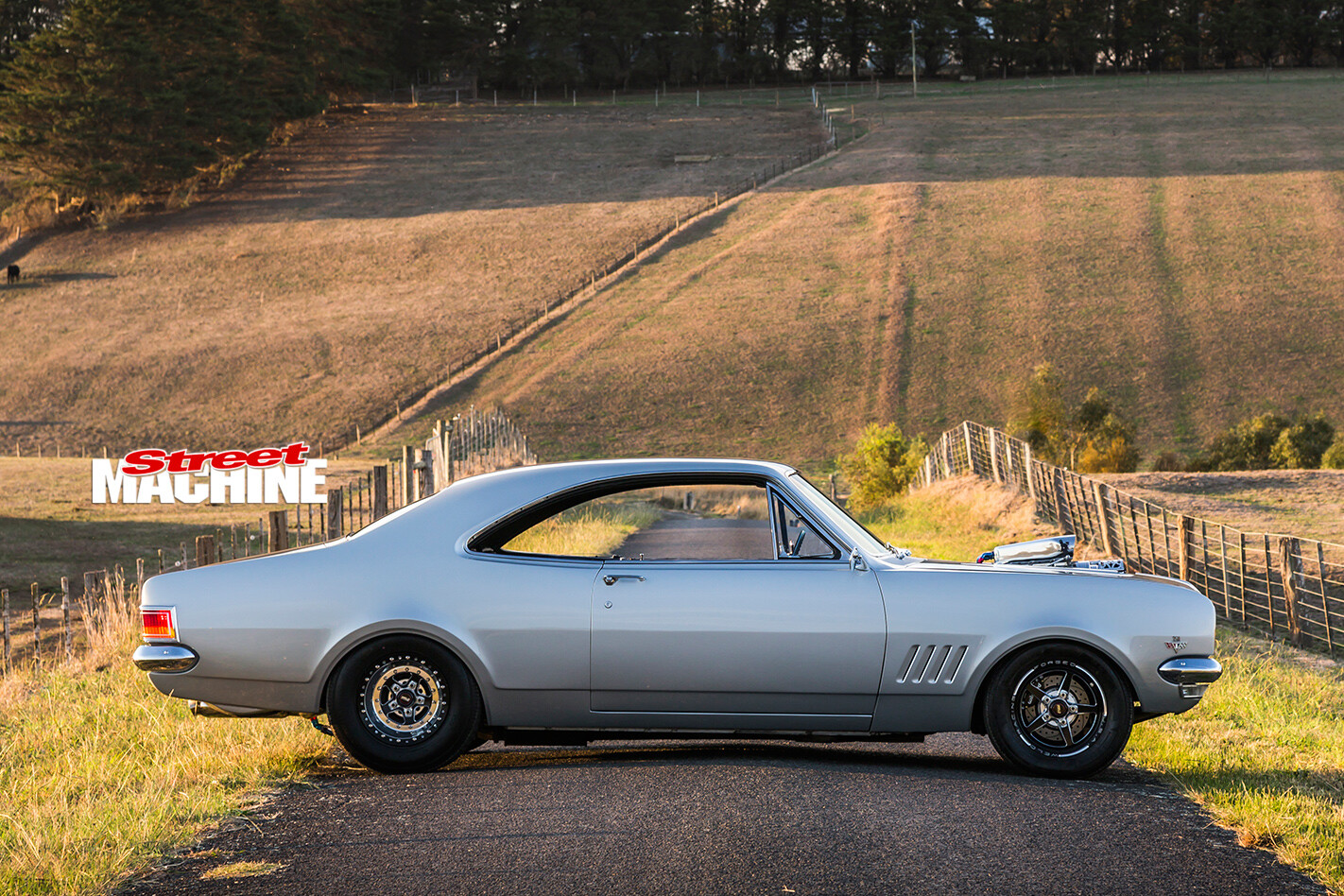 “I’d had a look at another one at a swap meet but it was full of bog,” he recalls. “And then on the way home, I got a phone call telling me this one was for sale.”

It was, in fact, the exact same car Leigh had fallen in love with when he saw it cruising Geelong back in the day. “I got straight on the phone and told the seller I’d buy it. I was rapt to find it – it was a good honest car. The bloke’s brother had one, too, and these were known to be two of the best cars around back then.” The Monaro already sported a 350-cube Chev V8 and a nine-inch. “It was typical 1980s,” Leigh explains, “from the days when these things were $1000 P-plate cars, like VT Commodores are today.”

With the deal done, Leigh drove the car home, despite the fact it had been sitting around such a long time. “At first I had no plans to do anything except enjoy it; I was just happy to have got it,” he says. “But by the time I got home, those plans had changed!”

The car overheating on the drive home might have helped Leigh’s decision, too. “Everything was there but it was tired and well-worn,” he recalls. “Nothing was broken; it was just past its best. I could have cruised around in it the way it was, but it was ready for a freshen-up.” 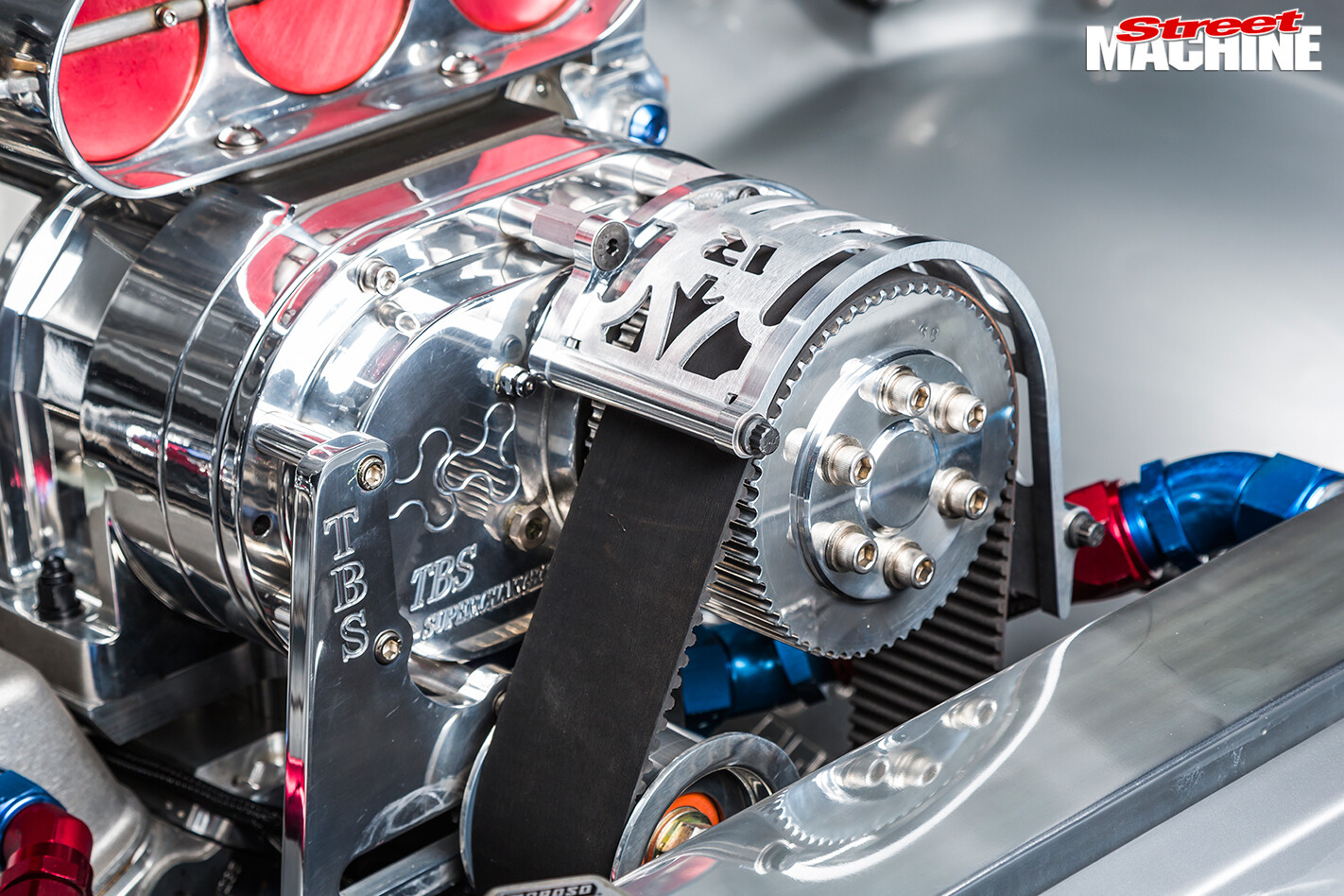 The first task was to fix the Monaro’s overheating. “I pulled the radiator out and had it cleaned, then that didn’t work so I put a new one in it. That looked good, so then I wanted to paint the engine bay – then I put another engine in it.”

That was a 400-cuber, and Leigh did a bit of racing with it. “Then I sold that engine, so the car was off the road again – then another engine went in!” Leigh dropped in another 400, but this time with a 6/71 blower. Why so many engines?

Leigh laughs. “People wanted to buy them!” he says. “As long as you can step up a bit higher each time, I’m happy with that.” Leigh’s previous mills were carb-fed, but this time he wanted electronic injection. 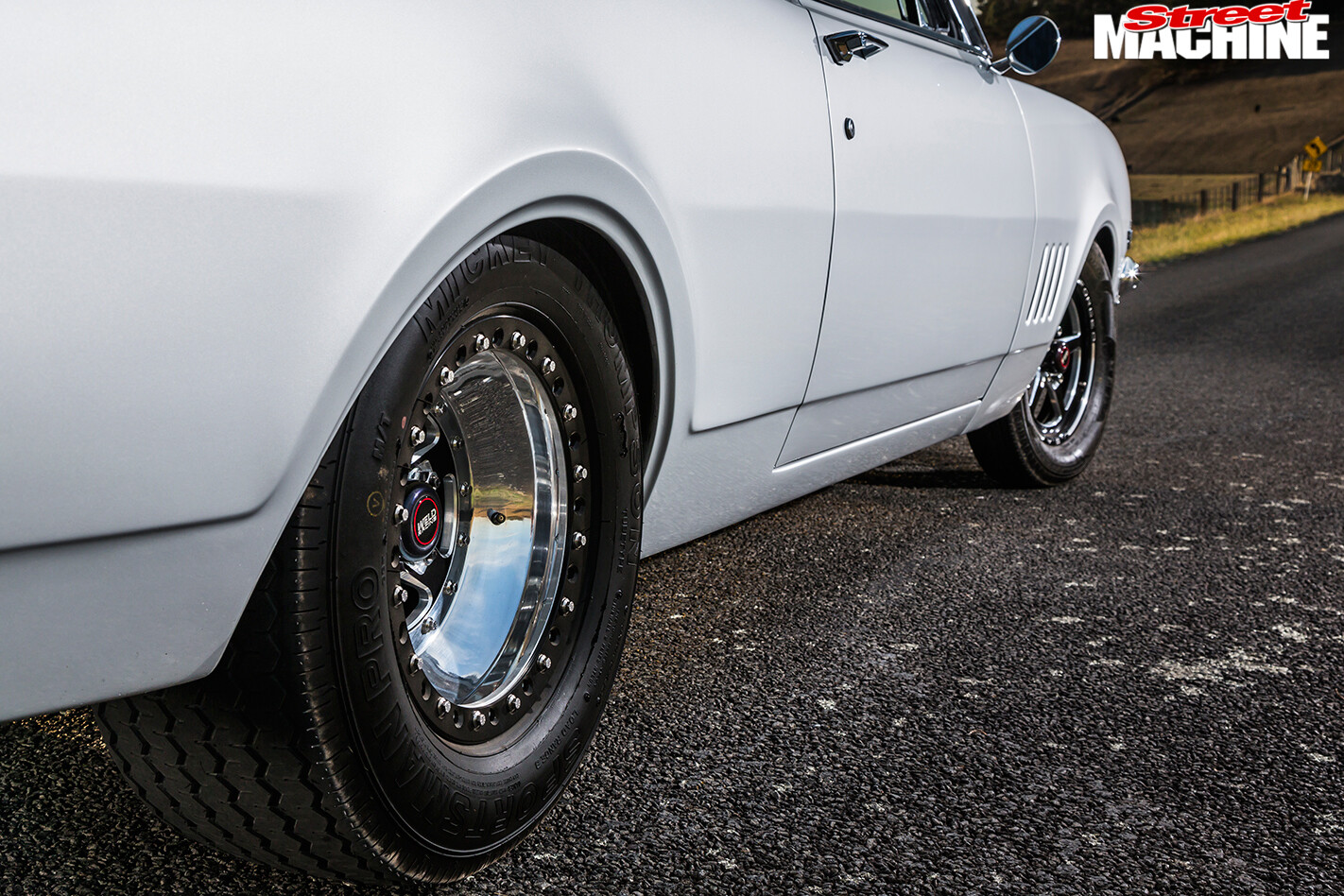 “I used to be a carby man,” he reckons. “You know, that whole ‘oh, I’ll be able to fix it anywhere,’ attitude, but once you get your head around this, it’s fantastic.”

Behind the Chev is a 4000rpm TCE converter, a Tradematics-built manualised TH400 three-slot auto and a sheet-metal nine-inch filled with a Truetrac centre and 3.9 cogs. 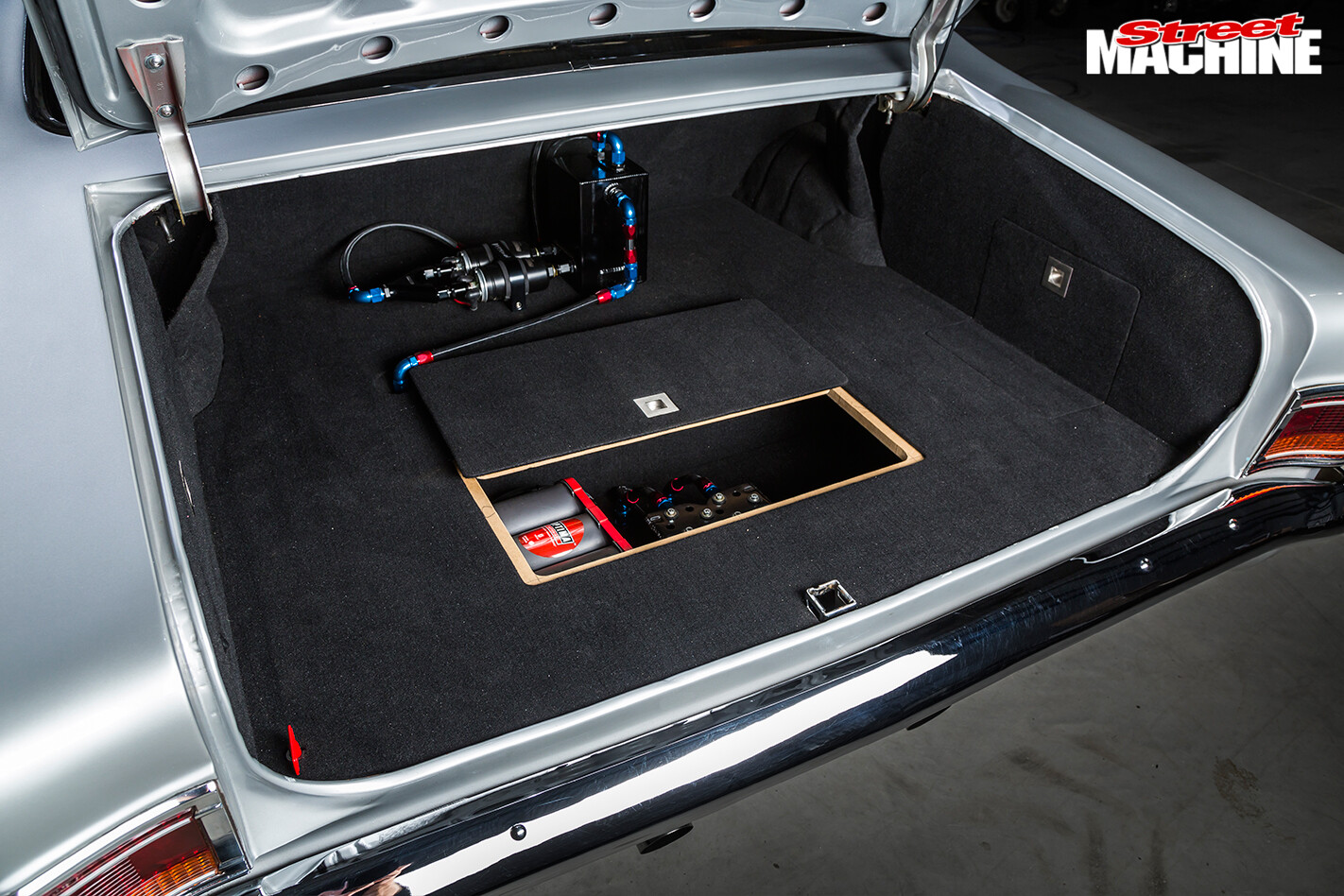 The years – including a decade under a blanket – had been kind to the Monaro’s body. “It was in very good condition,” Leigh says. “There weren’t any rust repairs required – it was clean-as. We did a bit of sheet metal work in the engine bay and tidied a few things up. The inner guards and the subframe have been done – there’s not a seam on it anywhere. Fresh paint, and that’s about it. “The body was pretty simple because it was in such good condition,” he continues. “It was that good it was boring!” You don’t hear people say that too often! Working in his bloke-sized 18x9-metre backyard shed, Leigh stripped and reassembled the car, but the processes in between were farmed out. “I’ll put the time and effort into the fiddly and detail stuff but I’m happy to pay the pros to do what they do,” he says. That’s a good way of doing things, as you get plenty of fun time with the car and save money for the important tasks, such as paint. “Plus, it’s great to get out into the shed and do that sort of work,” Leigh says. 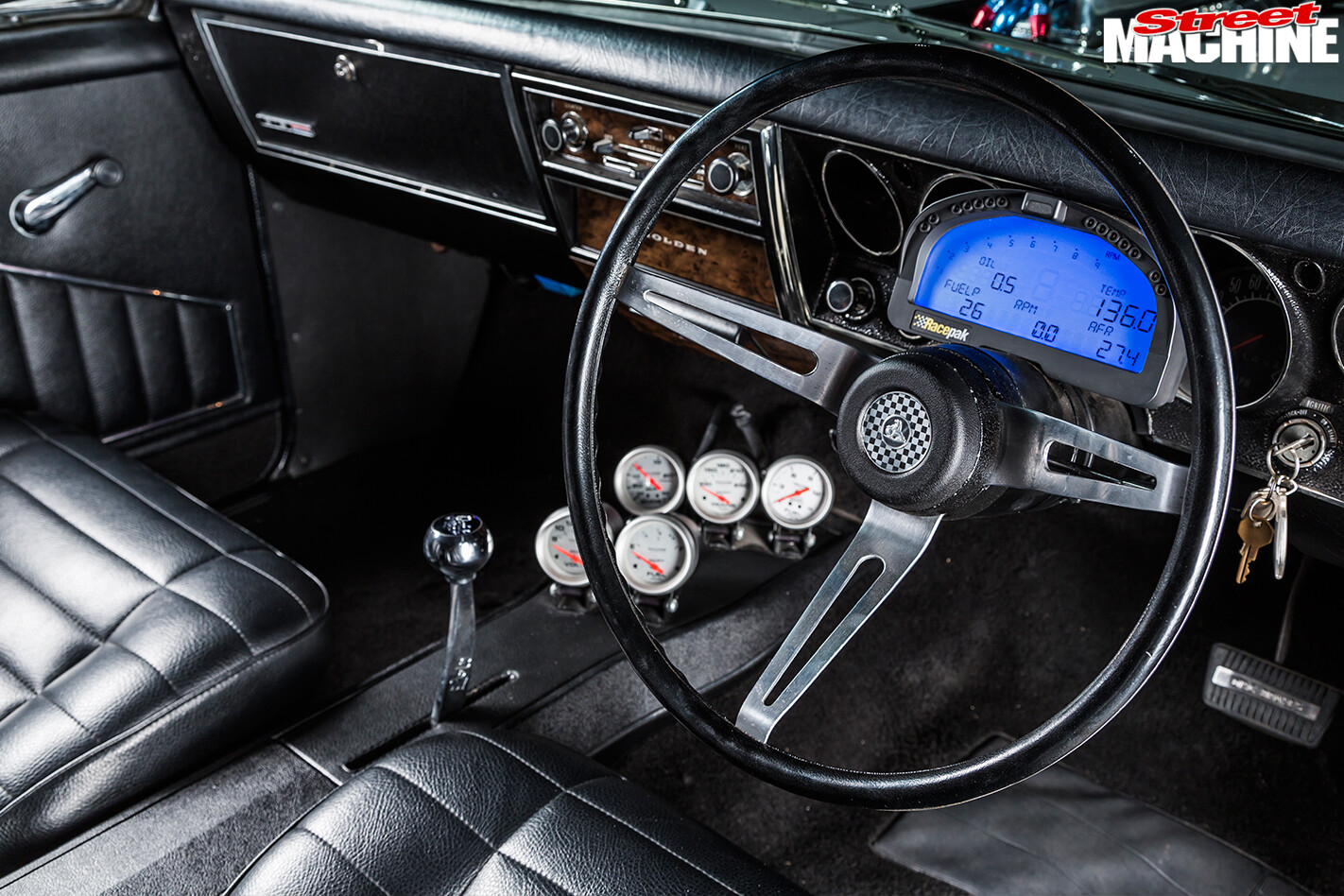 In this case, it was Cam Arkell at Cam’s Metal & Speed in Geelong who did the body before applying a lovely, softly foggy silver mix from PPG.

The interior is similarly cool, having been retrimmed to original by Qual-Trim. Extras are the B&M shifter, extra Auto Meter gauges and the Racepak dash, which interfaces with – and datalogs – the Holley management system. 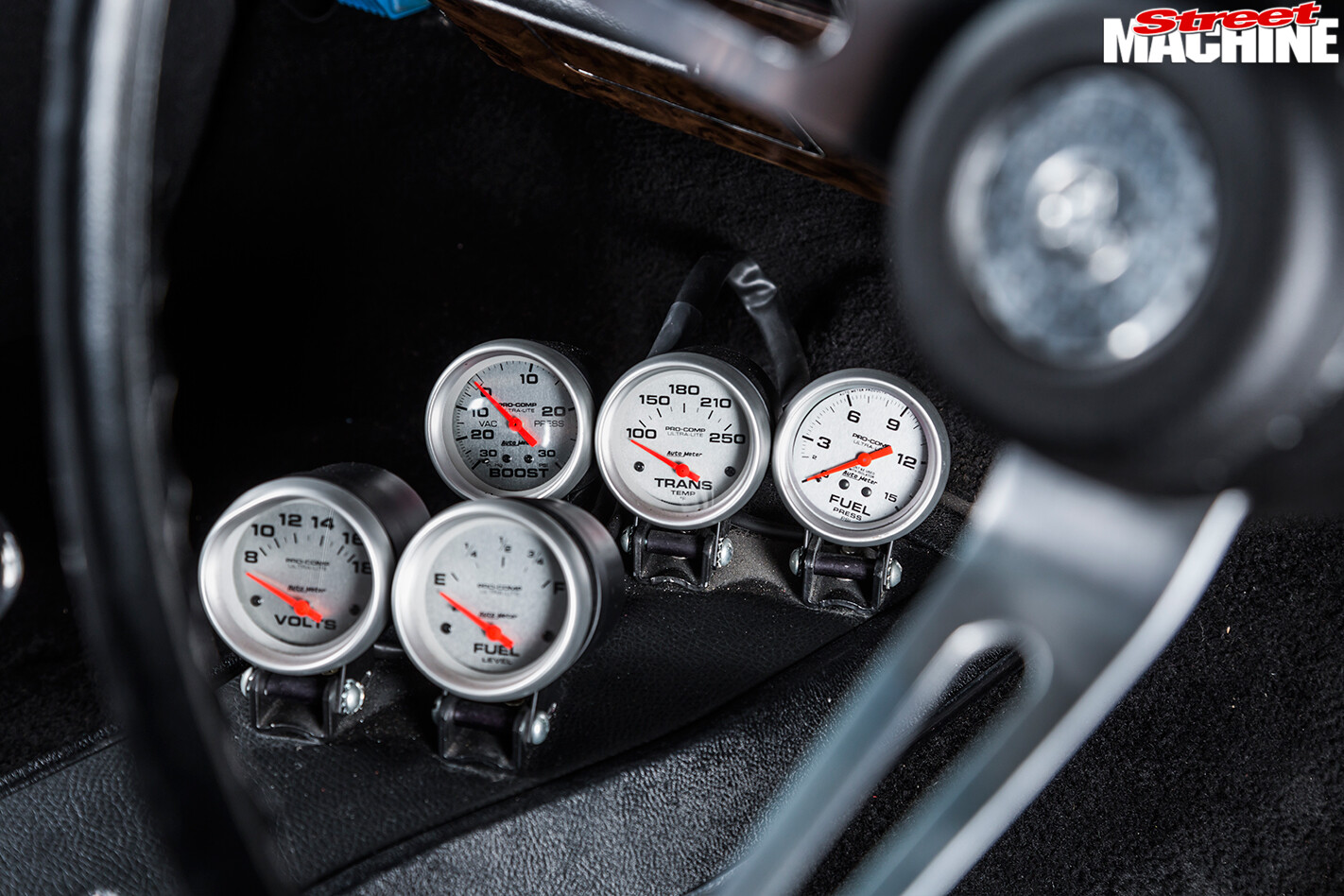 Despite the monster mill and the comp-tech instruments, this Monaro is a sunny Sunday car.

“Sure, we’ll give it a squirt down the strip,” Leigh says. “But it’ll be all over the place because we haven’t set up the chassis for the drags. It’ll be twisting the body. It’s overkill. But it’ll be capable of somewhere in the nines.” Leigh mentions that he’s building an LS-powered HK Holden ute for attacking the track instead. “But really, it’s very driveable,” he says of the HG. “Youcan drive it like a normal car as long as you respect the throttle. I built this one to look nice and to cruise around with my wife Amanda and little boy Cohen.”