The donor vehicle for this build was a one-owner, six-cylinder VL Berlina with 400,000km on the clock. Overall it was in reasonable condition, albeit very tired. So let’s pick up where we left off from part one. 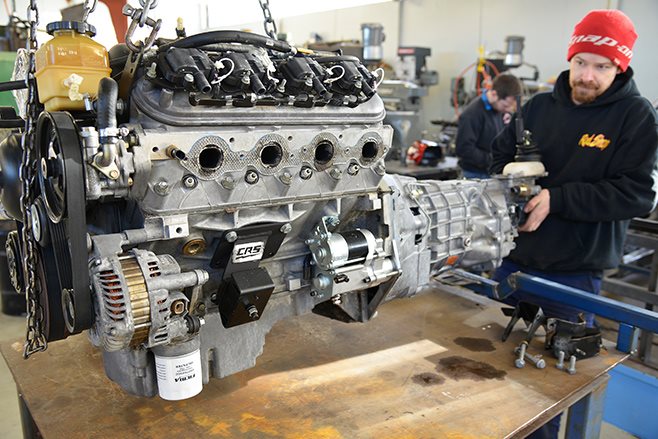 Step 1. In Part I of CRS/Waddington’s VL build, they stripped the Berlina down to its undies, set it up to accommodate a VZ-series LS2, gave the panel work and engine bay a good going over, and swathed the body in eye-catching HOK Cobalt Blue Kandy (and all the bars and mouldings in contrasting silver). The assembly stage was on the home stretch. How do you like those distinctive laser-cut CRS engine mounts? 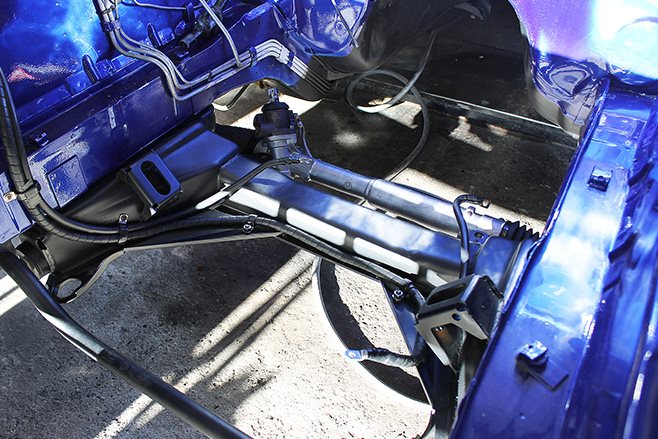 2. Before the engine was loaded into the freshly prepared engine bay, the battery cables and restored car harness were set into place; insulated saddle clamps keep everything permanently out of harm’s way. 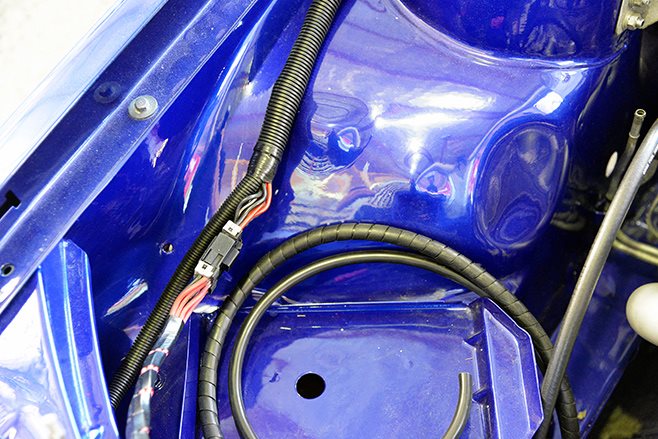 The custom CRS engine harness goes in with the engine and slips through a hole in the upper passenger side of the firewall. From there it mates up to a recalibrated VZ ECU mounted in the passenger footwell (see Step 11) 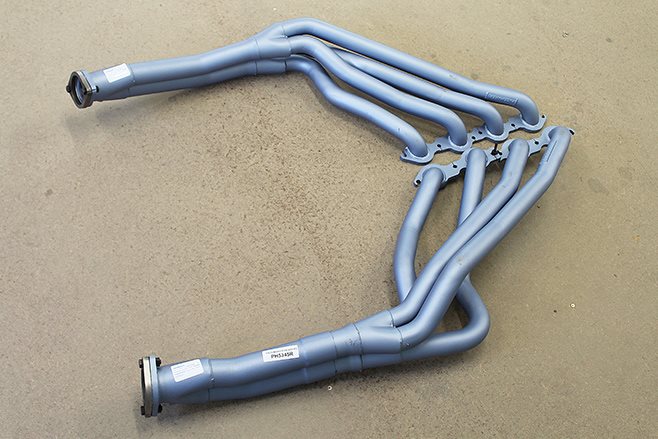 3. During initial fit-up, CRS used four-into-one pipes. These required firewall modifications and were an extremely tight fit. This issue, along with the concern that some might be put off by having to modify the firewall, prompted CRS to substitute this Pacemaker Tri-Y design. 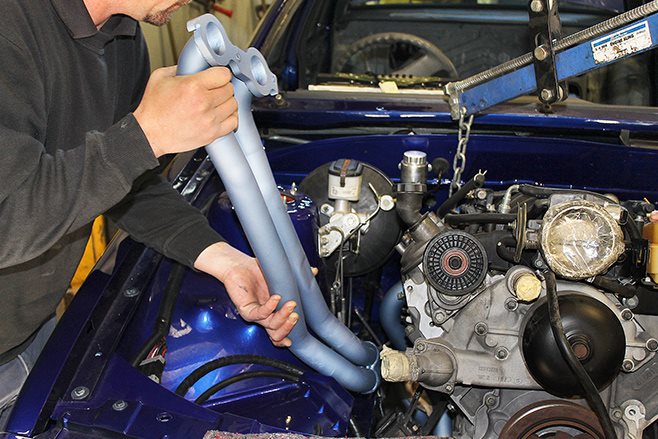 They fit better and do not require body mods. Still, the drivers-side pipes need to be fitted (in two pieces) before the engine is all the way home 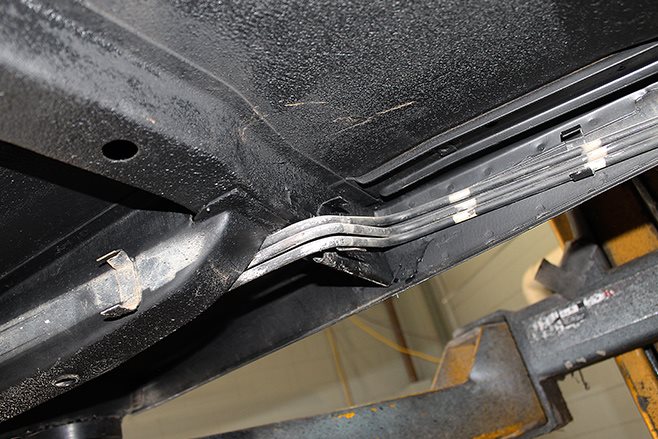 4. Although the new Tri-Y headers offer greater overall clearance (including improved ground clearance, which is ideal for those running a lowered stance), the drivers side is just so tight that the fuel and brake lines need to be relocated to the inside of the chassis rail to keep them from being cooked. You can see the mark on the far left where the hard lines used to run. They now come up through the inner guard area. 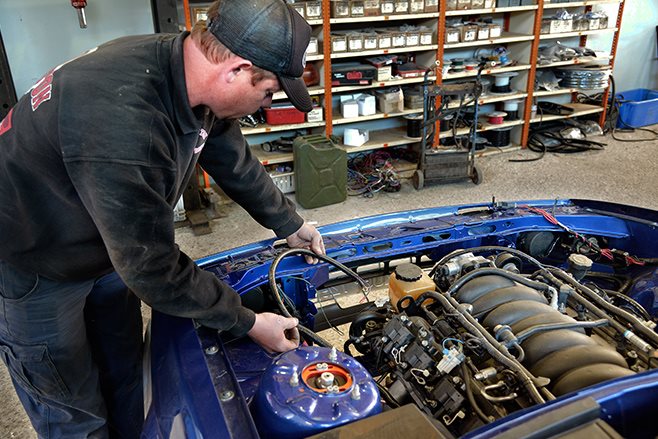 5. The remaining hard lines and wiring can now be connected. As with all its kits, CRS supplies a comprehensive instruction booklet, which outlines such things as how and where to properly route the new wiring loom. As for the engine ECU, it will need to be shipped to CRS to be modified to suit each customer’s individual application. CRS can even offer performance tunes through Cavill’s Performance in Shepparton. 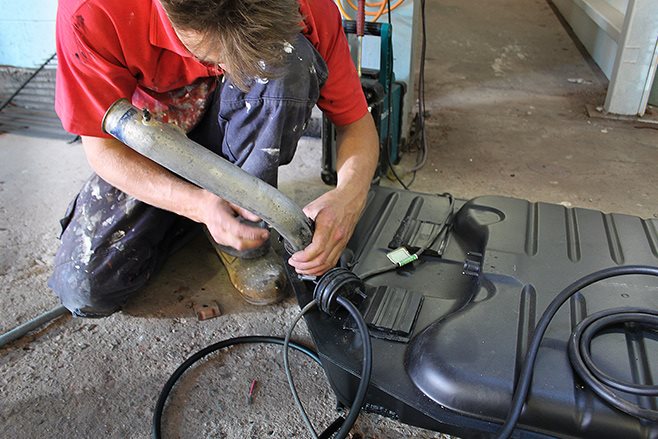 6. To do away with the VL’s original dual pump system (lift pump in the tank feeding the main external fuel pump), CRS fitted a VS Commodore tank, which uses a single, in-tank pump set-up. The swap requires fitting the VL filler neck onto the VS tank. 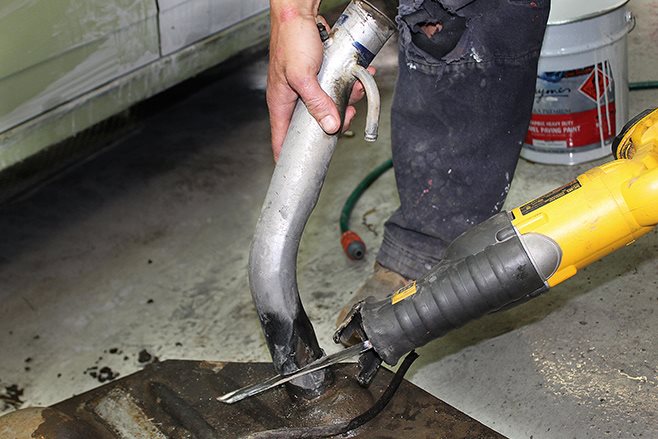 After filling the tank with water, a reciprocating saw liberates both filler necks. A short section of hose and a couple of hose clamps mates the VL neck to the VS tank. 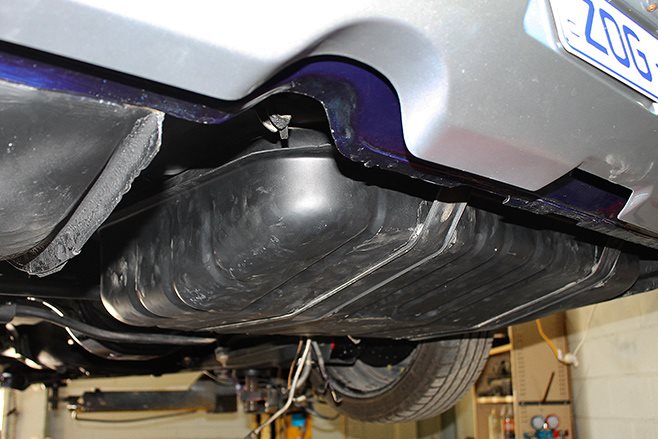 7. The VS tank fits under the bum of the VL like it was designed to go there; a lick of paint makes the whole thing look like new. CRS also installed an upgraded fuel pump to satisfy the blown LS2’s higher fuel demands. Physically, there was little difference between the pumps, so the upgraded version fits comfortably into the factory location but offers significantly greater flow and increased pressure. 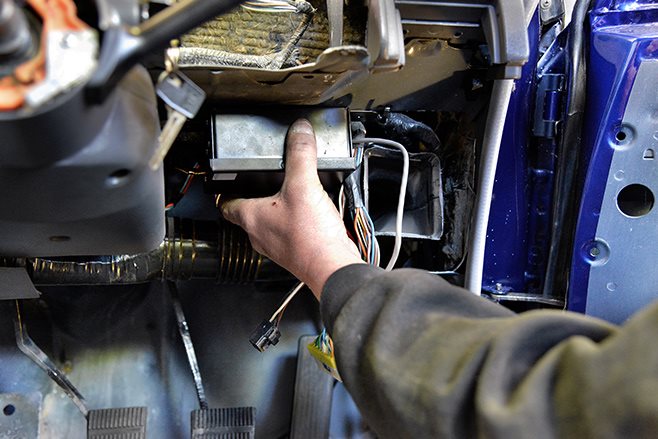 8. Except for a couple of early versions, the Tremec T56 lacks a mechanical speedo output, which is a problem when fitting the beefy box to older cars. To solve this issue, CRS offers the Cable X-Box. This beaut device takes the electronic signal from the T56’s speedo sender and creates a mechanical speedometer output to run a traditional speedo. The box needs to be mounted under the dash in a convenient location. 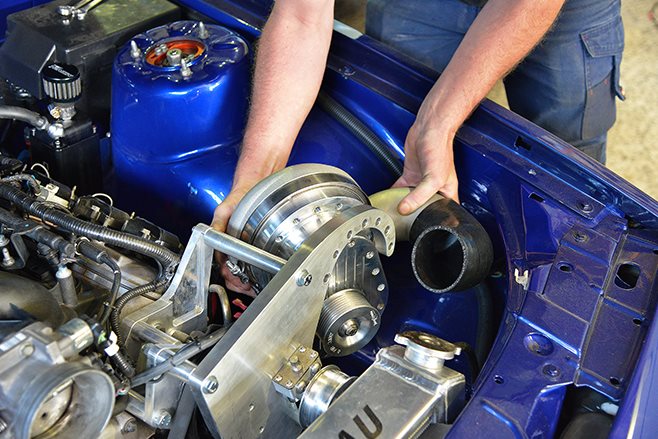 9. Blower time! If the extra power of the LS2 wasn’t enough to wake up the relatively lightweight VL Commodore, then the addition of a centrifugal supercharger certainly will! When the blower is working hard, it can really try to kick, requiring those big, burly brackets to hold it firm. If the mounts flex, it’s likely to have a nasty habit of throwing belts. Note the use of high-quality silicone hoses for all the flexible connections. 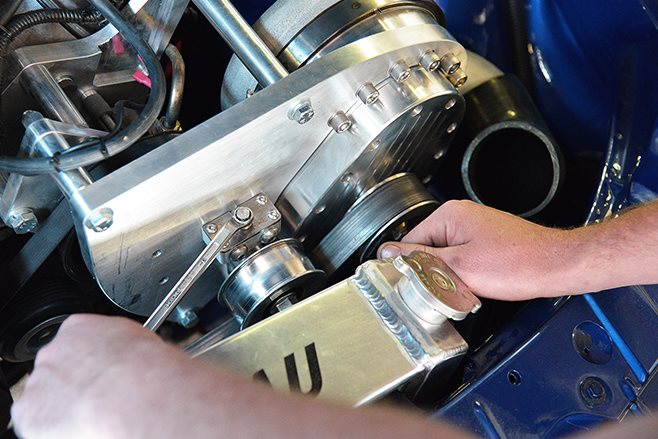 10. The CRS blower kit is designed to fit around all the factory gear and requires minimal component relocation. Tension on the serpentine belt needs to be just right. Too little and it’s likely to spit belts; too much and you’ll kill not only the blower bearings but also the engine’s number-one main bearing as well. All the mounting bolts for the blower use thread-locking compound to stop them from vibrating loose. 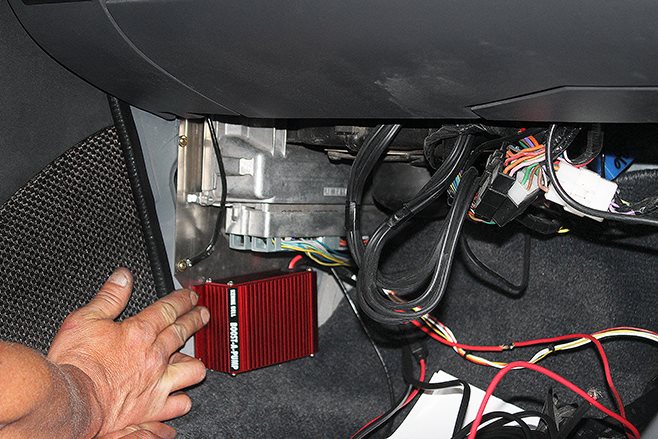 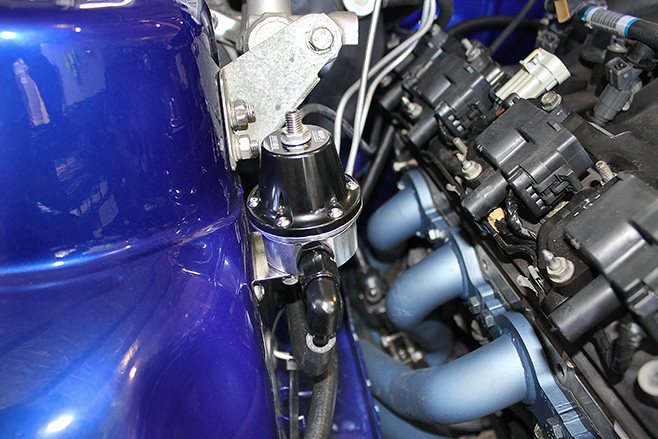 An electronically manipulated variable regulator allows fuel pressure to rise in conjunction with boost pressure for greater fuel delivery. The brain box is mounted in the passenger footwell (under the ECU), while the dial adjuster is located within easy reach of the driver. 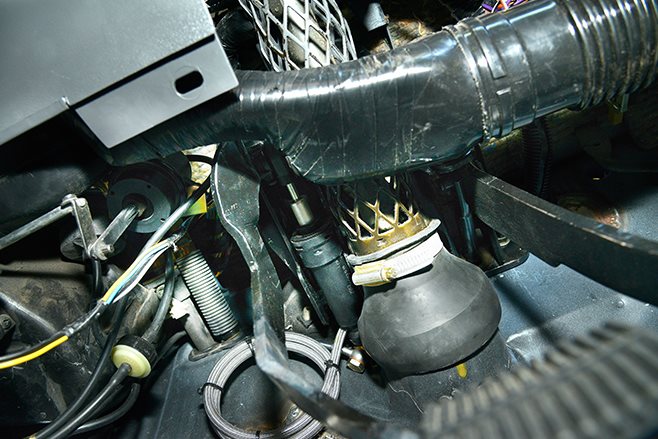 12. The VL’s mechanical clutch set-up is incompatible with the T56’s hydraulic slave cylinder. Rather than convert the VL pedal box (a lot of work) CRS opted to fit a VS pedal box, which requires slight re-contouring of the VS-spec accelerator and clutch pedals. 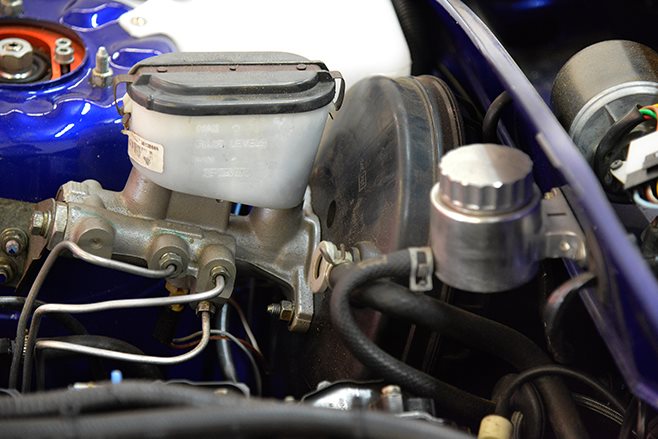 The master cylinder from the Mal Wood hydraulic conversion sits above the steering column, while the remote reservoir bolts to the firewall. 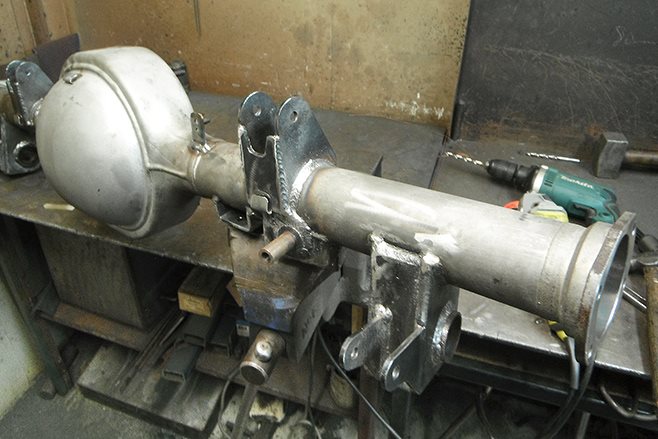 To handle the significant power increase, the third member was upgraded via a Ford nine-inch. The new housing was manufactured in-house and features all new componentry, including billet ends, tough 28-spline axles and a new 3.7:1 LSD. It’s a bolt-in proposition designed to work with the factory VL sway-bar, while leaving sufficient room for the three-inch exhaust that was eventually fitted. 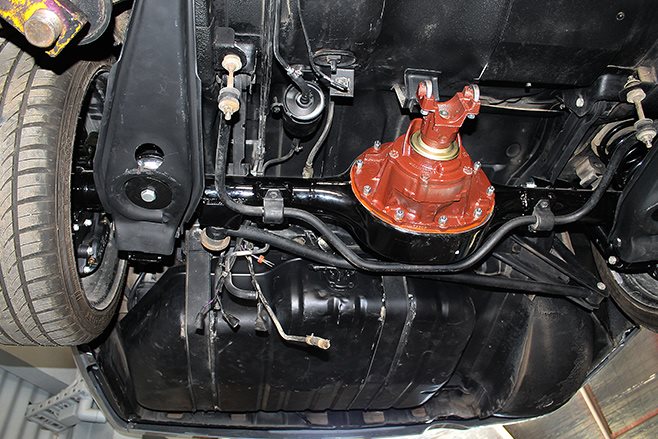 Rather than the original two-piece tailshaft, CRS opted for a bulletproof one-piece unit. With everything in place, it’s important to move the diff through its full range of travel to ensure correct spline engagement – that is, the yoke doesn’t bottom out when the diff is at full bump, and there’s plenty of spline engagement at full suspension droop. 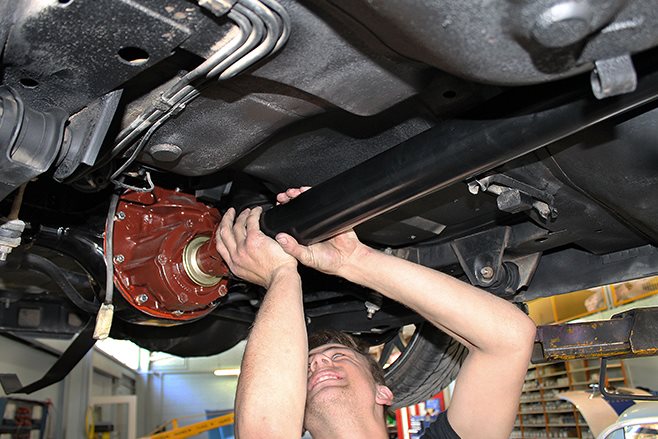 CRS uses premium-quality silicone bends and tough aluminium tubing for ducting the output of the blower into the LS2’s throttle body. CRS’s high-mount a/c compressor kit was required, as the compressor’s original low position fouled the VL’s chassis rail. This also meant the fitment of a smaller battery. 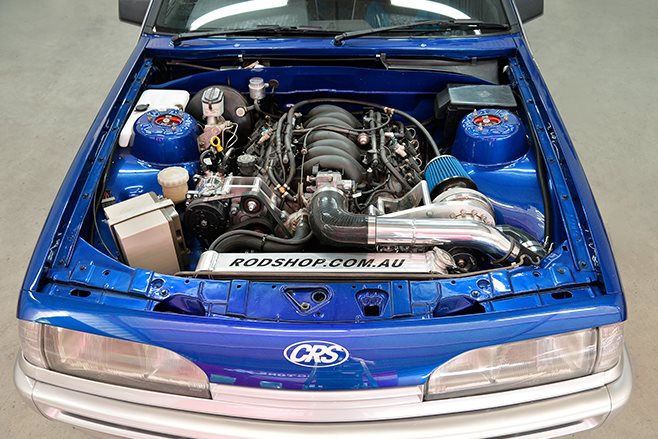 The new combo made 420hp at the treads on the Cavill’s Performance dyno. With so many possible fitment combinations, the ECU needs to be shipped to CRS to be individually modified. This also allows a range of tunes to be offered to suit various levels of engine modification.

CRS/Waddington finished the car off with a new interior, along with CRS’s new Wilwood brake upgrade package (drilled and slotted 320mm rotors, with four-piston calipers all ’round) and trick K-Sport suspension with coil-overs up front. Gazza’s Wheel World supplied the black 20-inch MC Racing wheels wrapped in 235/30/ZR20 rubber. All in all, a pretty trick VL, eh? Contact CRS/Waddington: (03) 5472 2853; or visit: www.rodshop.com.au 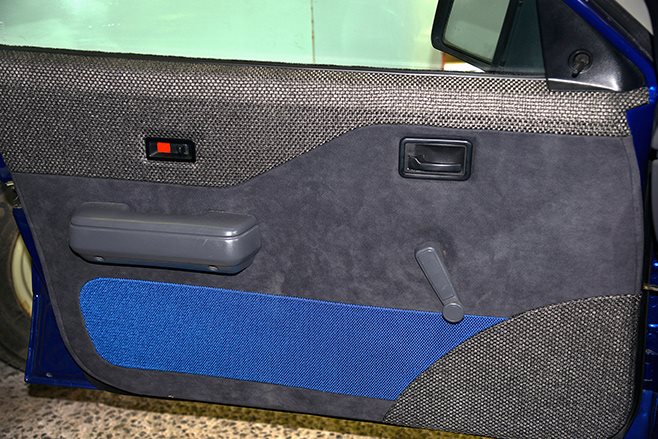 A&H Trim's brief for the interior was ‘budget but unique’. For the ‘unique’ aspect, they sourced blue and charcoal cloths from a commercial/furniture material supplier – that’s why no one else has them. To achieve the ‘budget’ objective, A&H used the factory bows for the new suede hood lining, rather than opting for a more involved, custom one-piece liner. 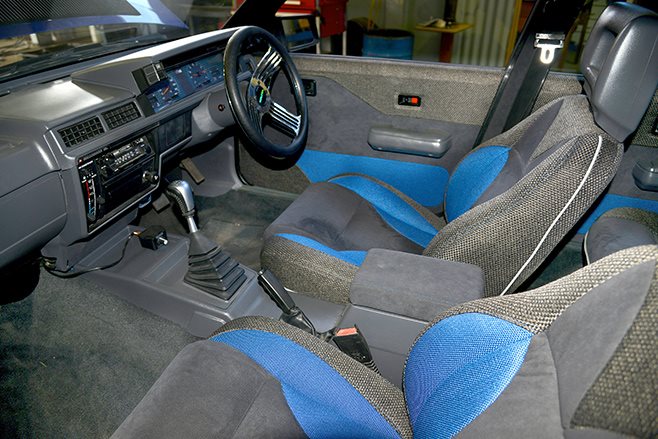 The console lid received new foam before being trimmed. Under the moulded carpet is high-quality underlay for good noise damping. All the factory plastics (head rests, seat sides, console, etc) were painted to match the interior’s new charcoal colour scheme. The modified T56 shifter looks like it belongs in the VL’s interior. 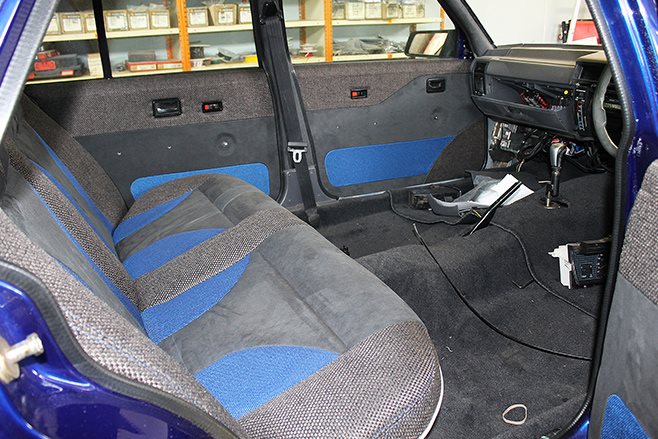 Final mounting place for the Boost-A-Pump adjustment knob had yet to be finalised. All things considered, it’s quite a transformation!