This pair of 10-second, LS-powered street cars proves that the apple never falls far from the tree

AT 73 YEARS young, Tony Rohr is a quiet, unassuming sort of bloke who hails from the town of Mudgee in NSW. But while others of his vintage are slowing things down, Tony is flat-out in the shed, madly trying to go faster. Not many septuagenarians build their own race engines and do their own fab work, but this one is so busy on the tools that he doesn’t have time to get old. 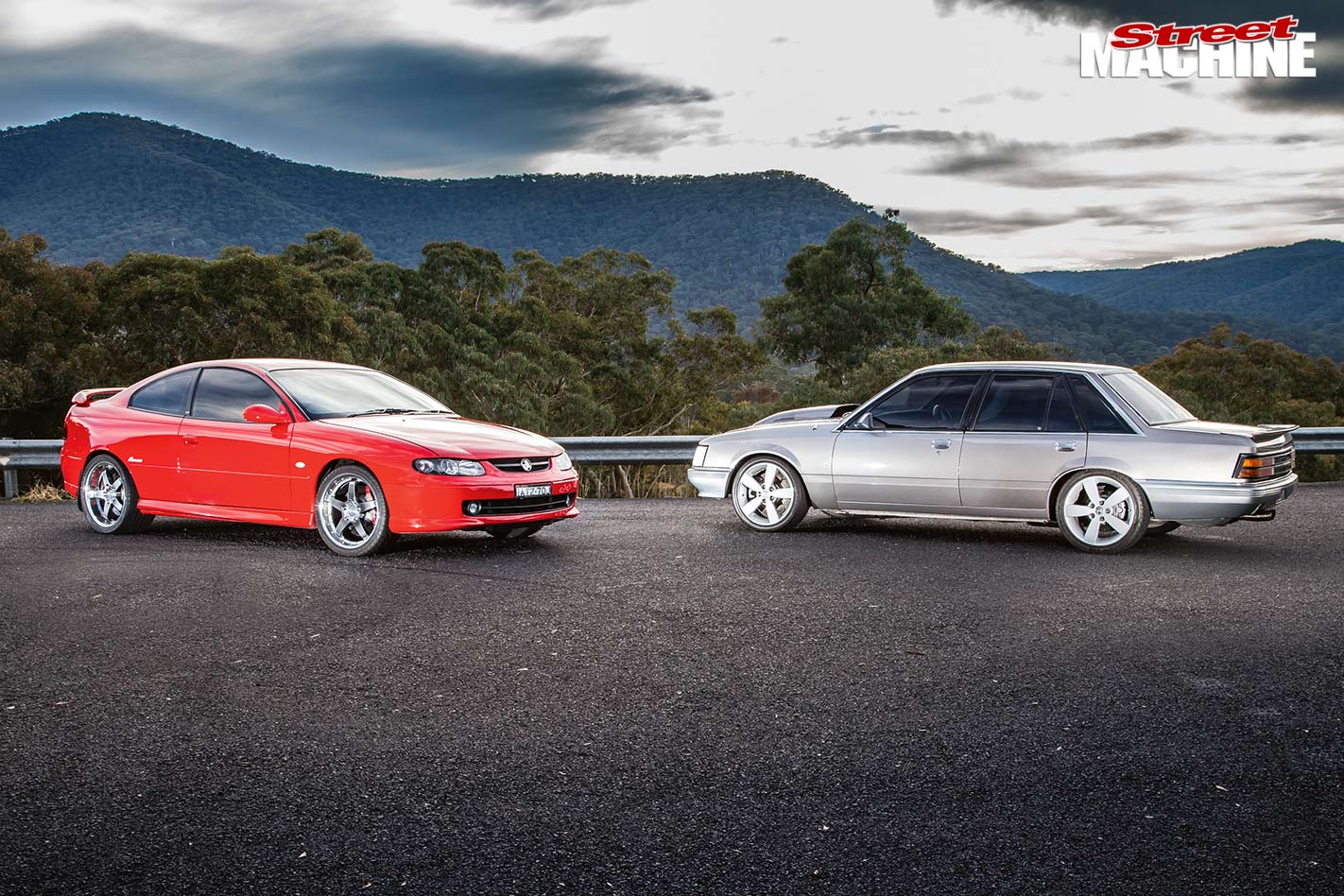 There’s a certain amount of synergy that exists between man and machine, because Tony’s 2004 CV8 Monaro is nothing if not unassuming. Save for a brake upgrade and a new set of 19-inch alloys, it has the outward appearance of a stocker, but looks can be deceiving.

Under the hood lurks an owner-built RHS-blocked 427ci LS, force-fed wholesale quantities of air by a Garrett GT4508 turbo. It makes 787hp at the rear treads on pump E85, and though it has yet to see the quarter-mile with the current combo, the previous set-up powered it to a 10-flat at a very healthy 145mph without a ’cage, much to the disdain of ANDRA officials at Sydney Dragway. Not bad for a full-weight, street-driven CV8 with leather, power everything and functional cruise and climate control. 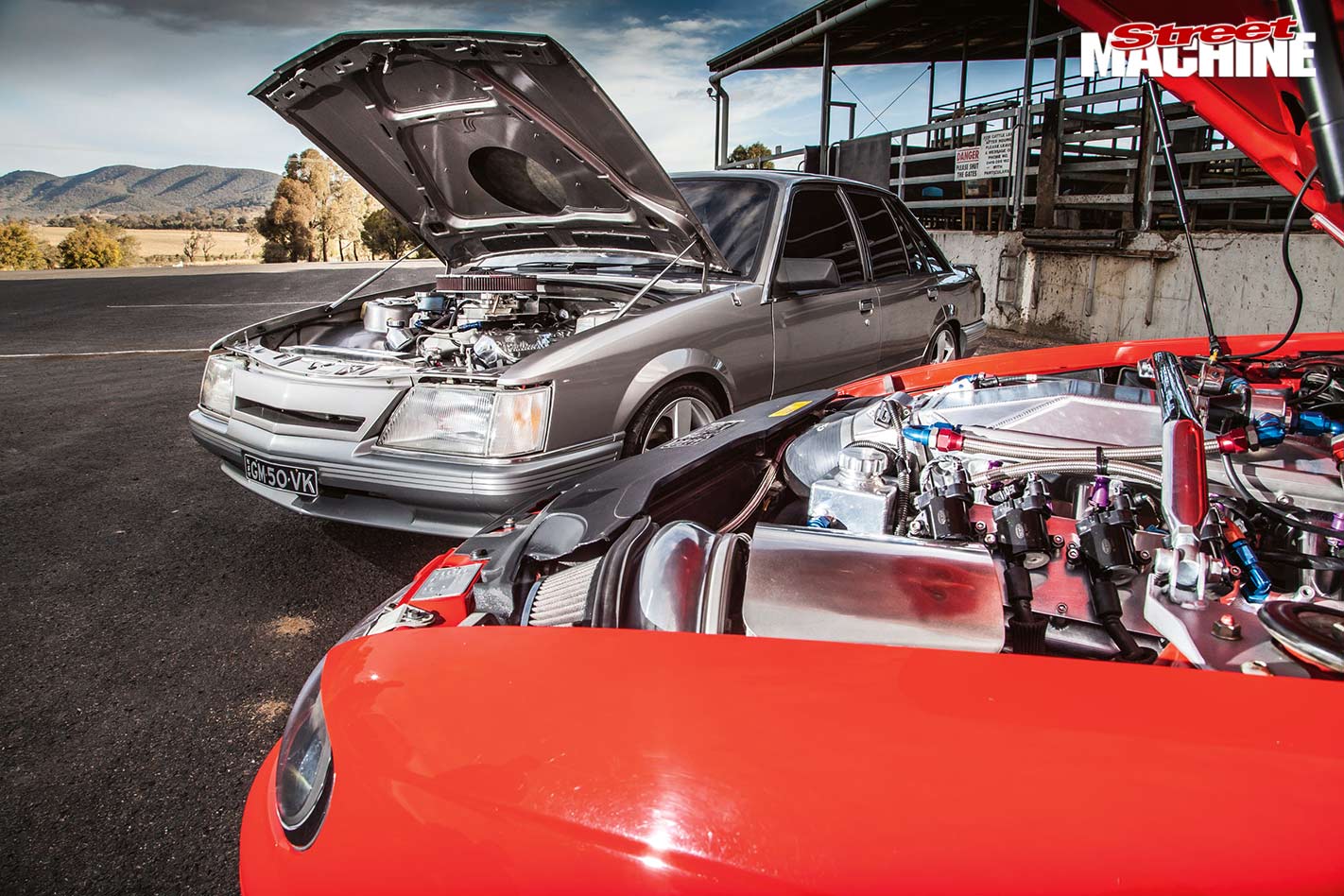 The Garrett GT4508 turbo breathes between 11 and 15psi into the 427, depending on the boost controller setting

But the Monaro is not the only 10-second streeter in the Rohr family stable. Tony threw together a budget-built, 408ci L98-based stroker combo for his son Pete’s VK Commodore, and it has performed admirably, stomping out 449hp and running 10.6@131mph on radials and pump 98, with a hydraulic cam and largely stock heads.

The family obsession with LS engines began in the early 2000s when Pete purchased a VU SS ute.

LS-conversion for a first-gen Holden Commodore 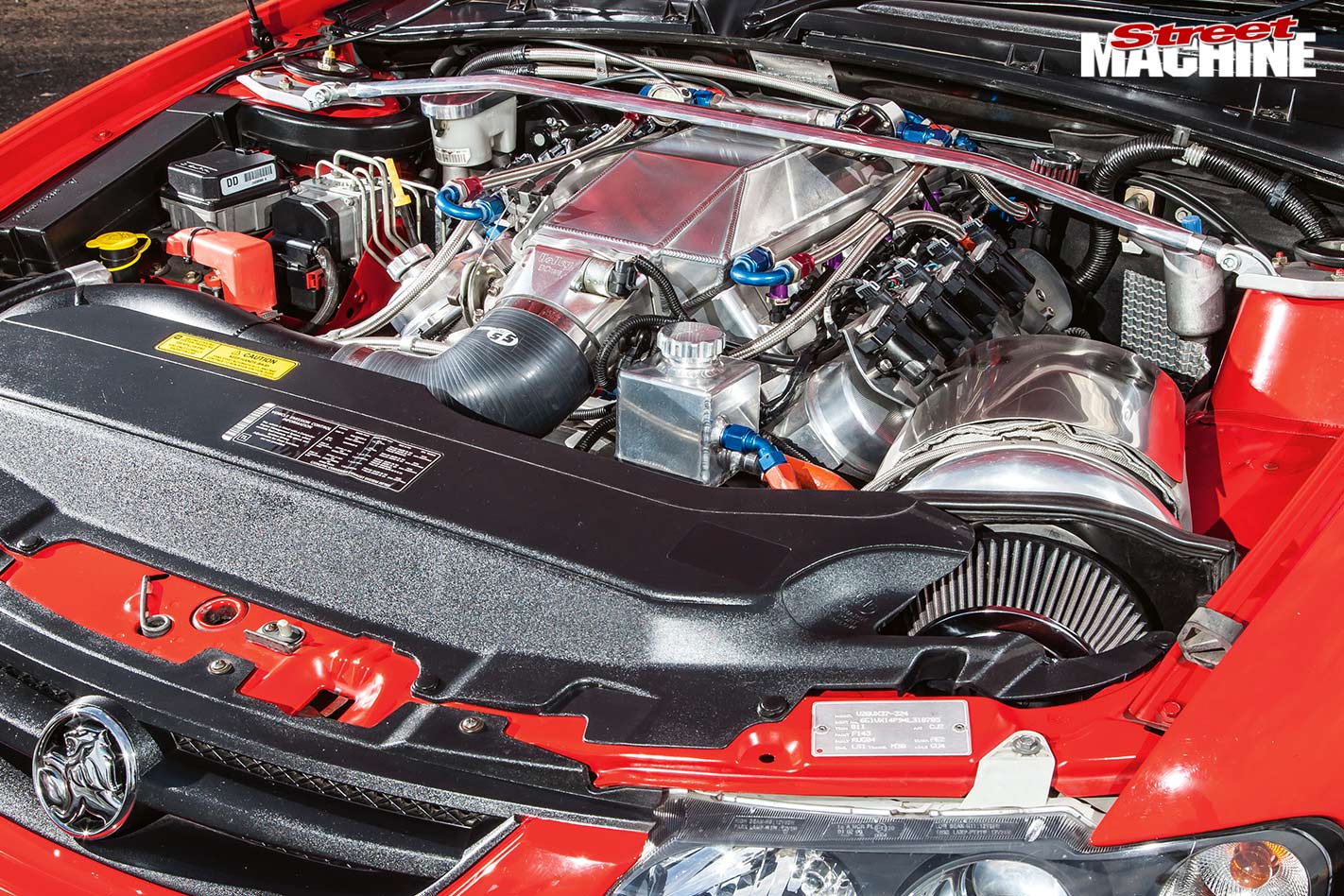 Surprise! You’d never pick that this 427ci, RHS-blocked, turbocharged monster resides under the hood of such a standard-looking car. It’s one hell of a sleeper, with very real nine-second potential

“I thought I could handle owning one, too,” Tony says. “Pete ended up putting a cam in his and that didn’t suit me, so I bought a VZ and put a Harrop blower and big brakes on it, and it ran 12.0@120mph with a manual. I just couldn’t get it to hook up, and Pete’s thing was nearly as quick. That’s when I decided it needed more horsepower; same old story – I wanted to go faster.”

Sonny at AutoWerks prescribed a 440ci LSX turbo combo for the ute, which Tony eventually transplanted into the Monaro. 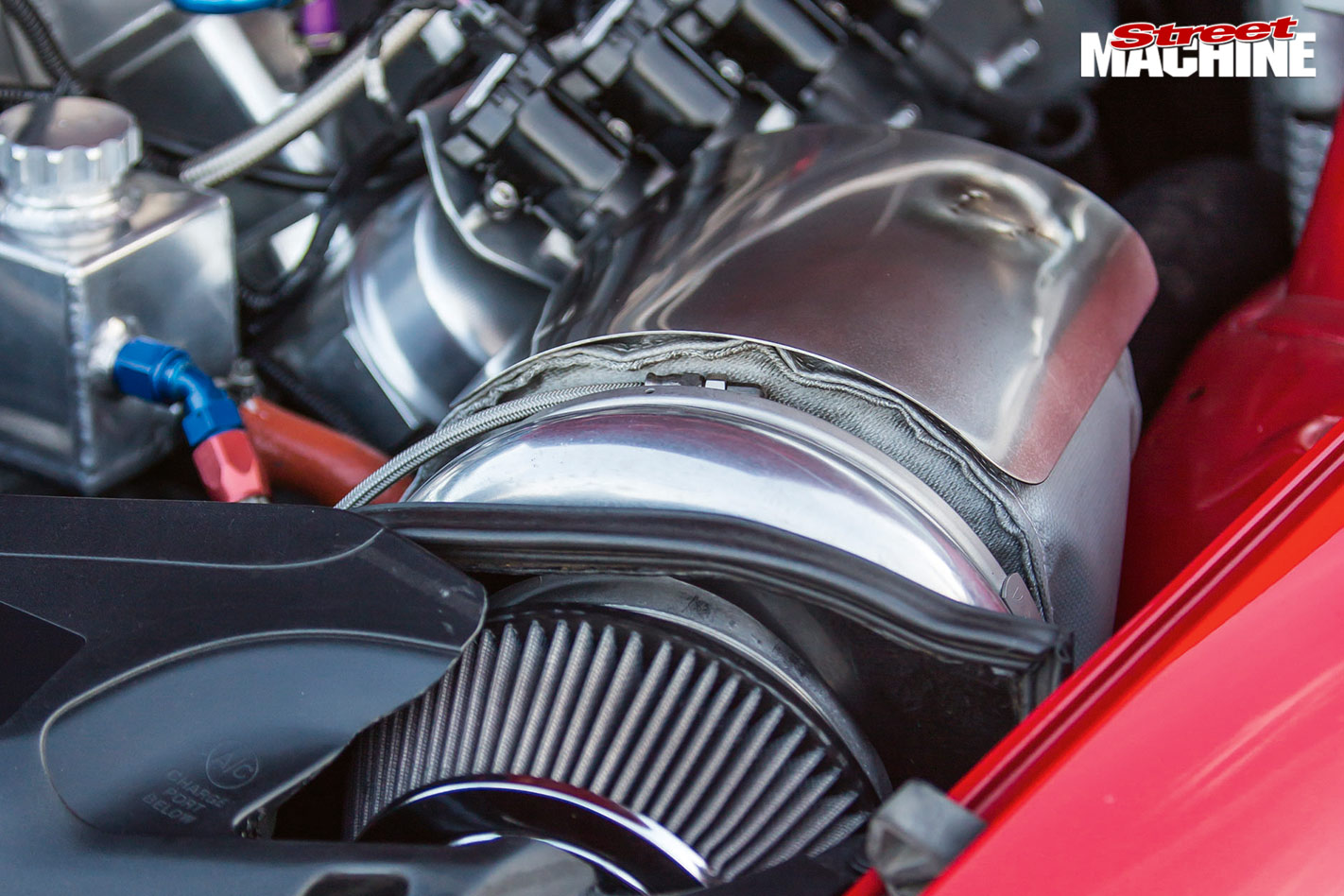 “We were amongst the first in Australia to run an LSX block,” Tony says. “And we kept the manual gearbox, which ended up being a problem. At the track I missed every gear except first and I couldn’t stand the clutch.”

An auto was the obvious solution, but Tony wanted an overdrive box, so he took a punt on a built Nissan four-speed, which the LSX promptly destroyed. Twice. He eventually went with a Craig’s Automatics-built Turbo 400, which has done the job nicely. 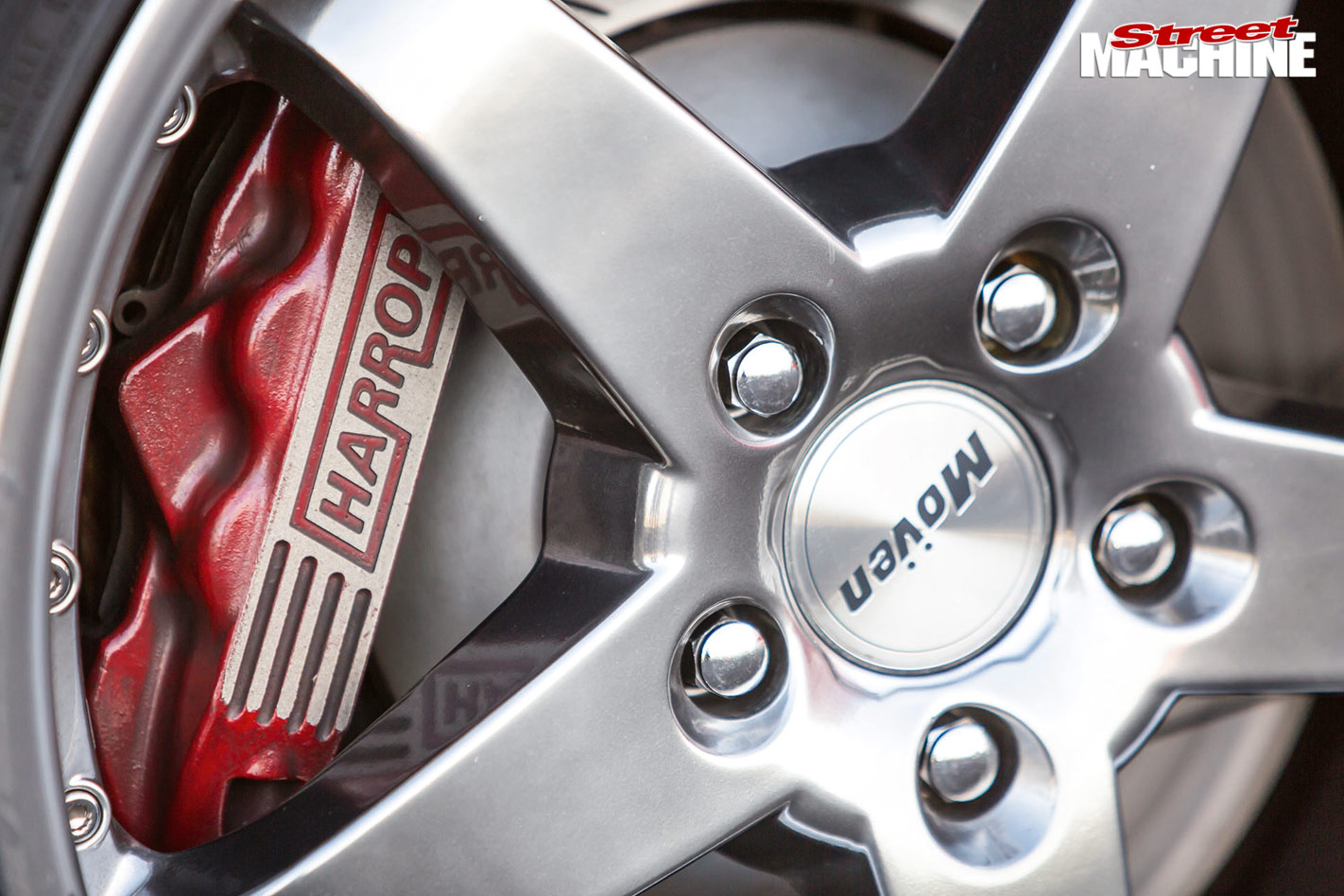 After a ton of dyno pulls, occasional street use and a fair bit of racing, the 440 was getting a little rattly. Tony pulled it down, identified a few issues, and decided to put the LSX to one side (he’s currently reconfiguring it as a nitrous motor for his VY one-tonner).

He started from scratch, building a fresh 427ci combo himself in the shed. Sparing little expense, he went with an RHS block and an all-new rotating assembly, consisting of a Callies Dragonslayer crank, Callies Ultra I-beam rods and JE forged pistons. The ETP LS7 heads were carried over from the previous combo but were fitted out with new 2.2- and 1.6-inch valves and T&D rockers, topped with a fabricated inlet manifold from Shaun’s Custom Alloy. 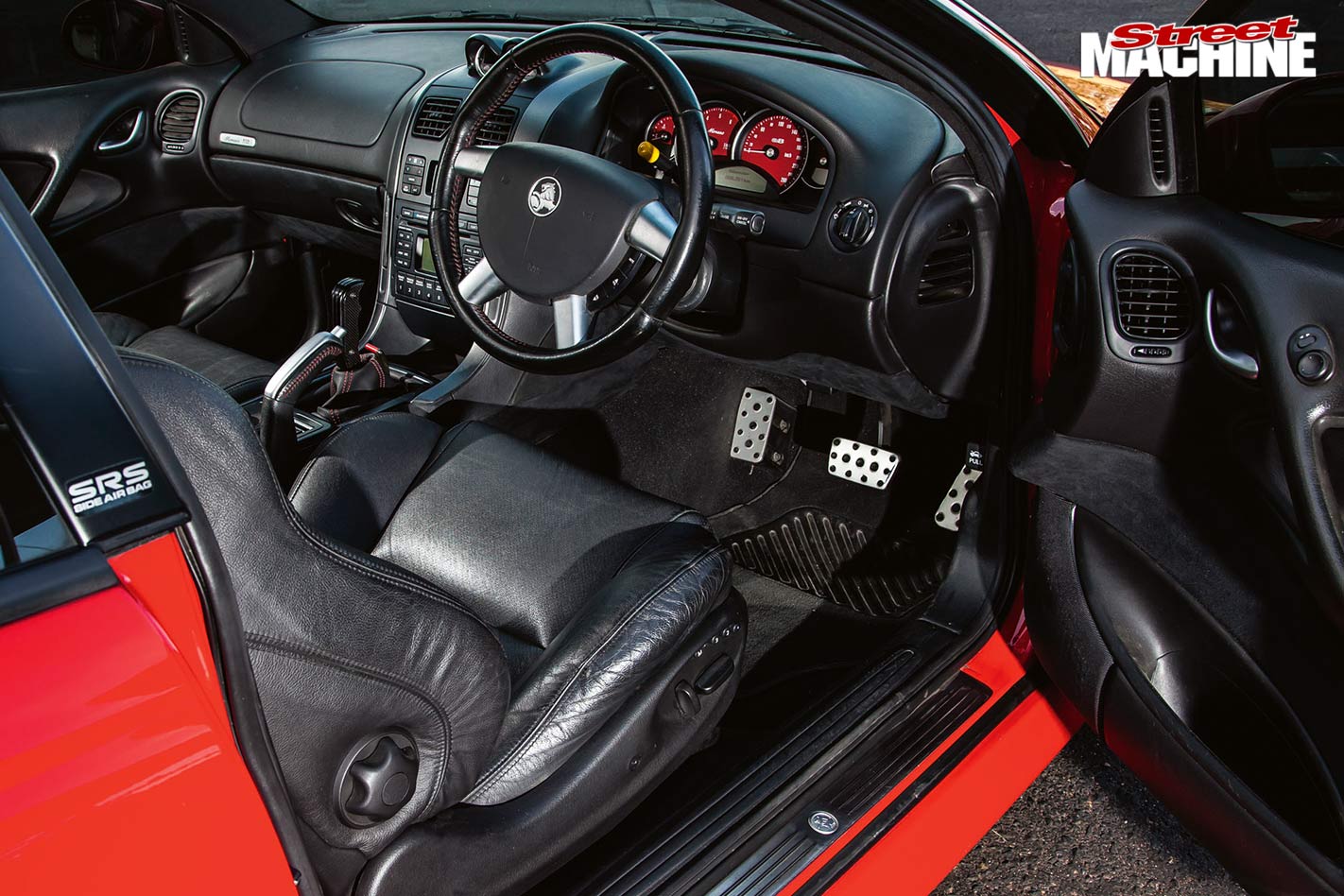 Even the Monaro’s cabin is understated. A black B&M Pro Ratchet shifter has been so neatly integrated into the standard console that at first you don’t even notice it. An HSV-style instrument binnacle houses Aeroforce Interceptor scan gauges, while a Turbosmart E-boost II is mounted in the centre console

The turbo kit is from ASE, but Tony has modified it to suit his application. He tweaked the manifolds so that the larger Garrett GT4508 would clear the bonnet, and fabricated a 3.5-inch dump pipe, along with the rest of the exhaust system.

The transbraked, reverse-pattern Turbo 400 runs a 3500rpm Dominator converter, and the rear end has been upgraded to a Harrop 12-bolt item with heavy-duty driveshafts to cope with the mountains of torque on offer. 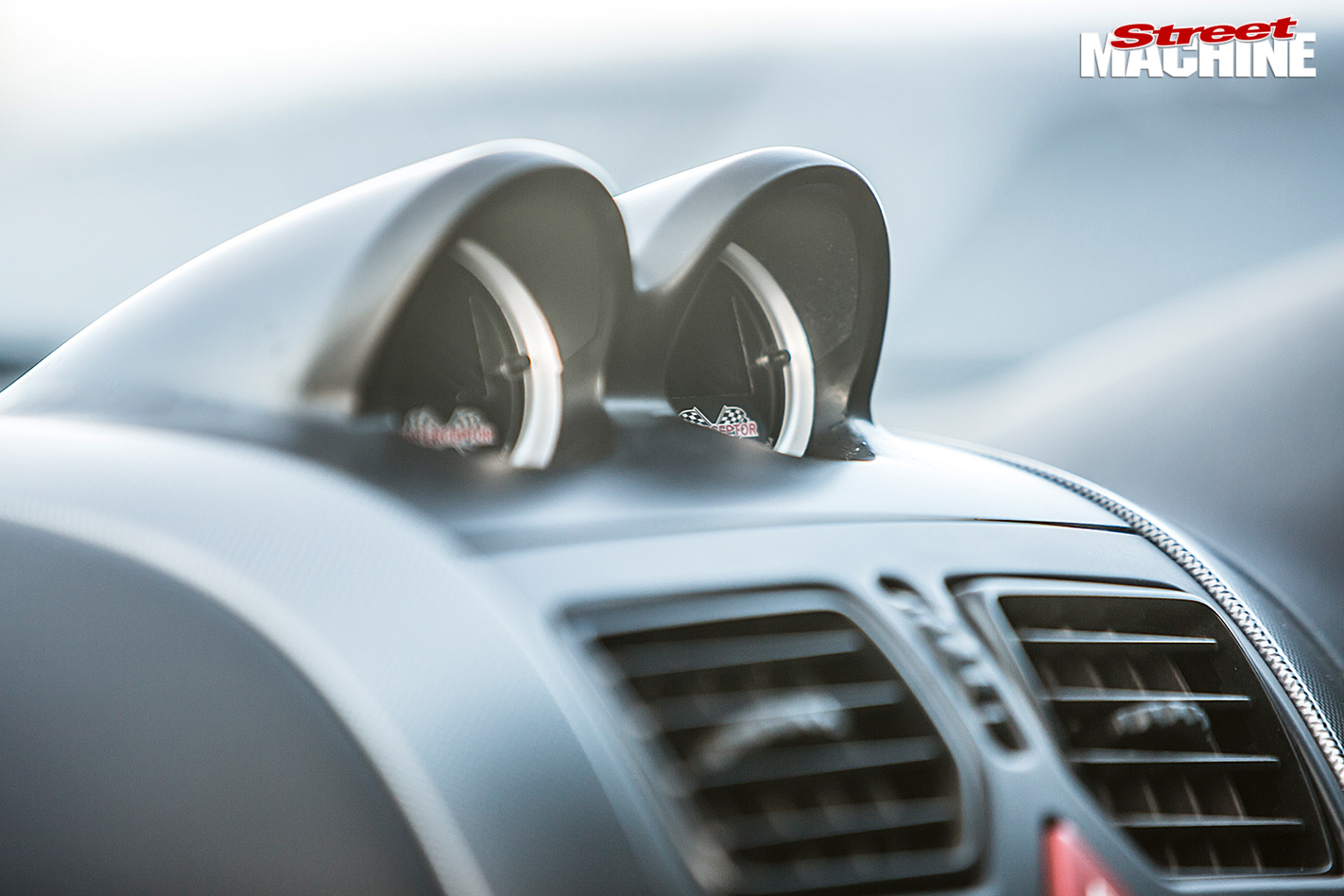 For the track, the 19-inch wheels, 355mm Harrop brakes and Koni front coil-overs are switched for 15s with slicks and front runners, standard brakes and Pedders 90/10 struts. And when the opportunity for another Hollywood pass arises, Tony has his sights set on the single-digit zone.

“I want to run a nine in a genuine, full-weight road car – I don’t want a stripped out car. It’s not the most practical thing on the street due to fuel usage and noise, but all the electronics still work – the only thing that doesn’t work is traction control.” And who needs traction control, right? 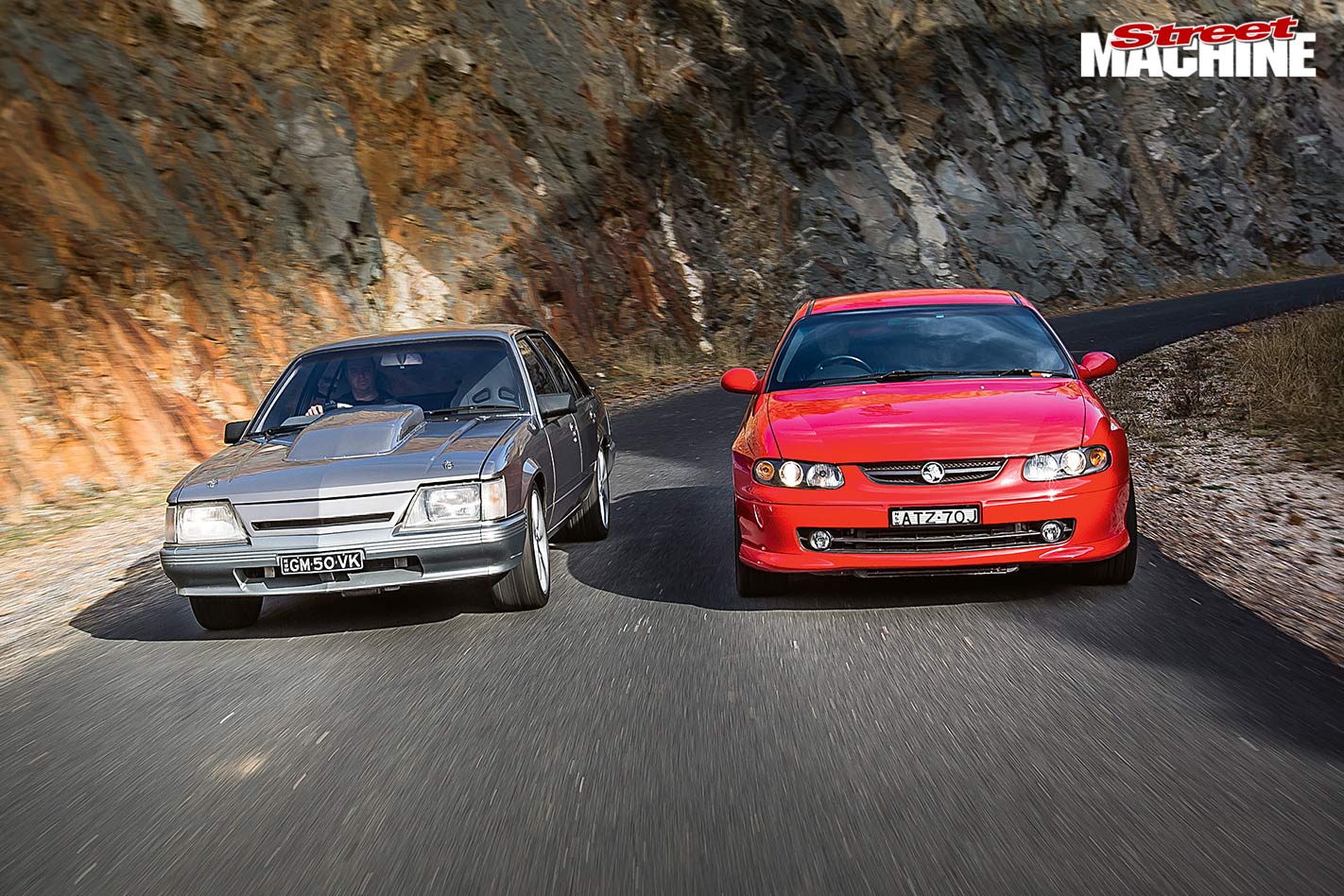 The VK came into the fold a few years back with a mild 308 and four-speed manual. It had been set up as a track car by the previous owner.

“We originally bought it use a burnout car, but it was in pretty good condition and we started to feel guilty about skidding it,” Pete says.

A second-hand camshaft, backyard port job and a carby spacer netted an impressive 100hp gain, and with the help of a built Trimatic and a 100-shot of spray, the cheap-and-cheerful Holden went on to reel off a couple of 11.8-second passes. 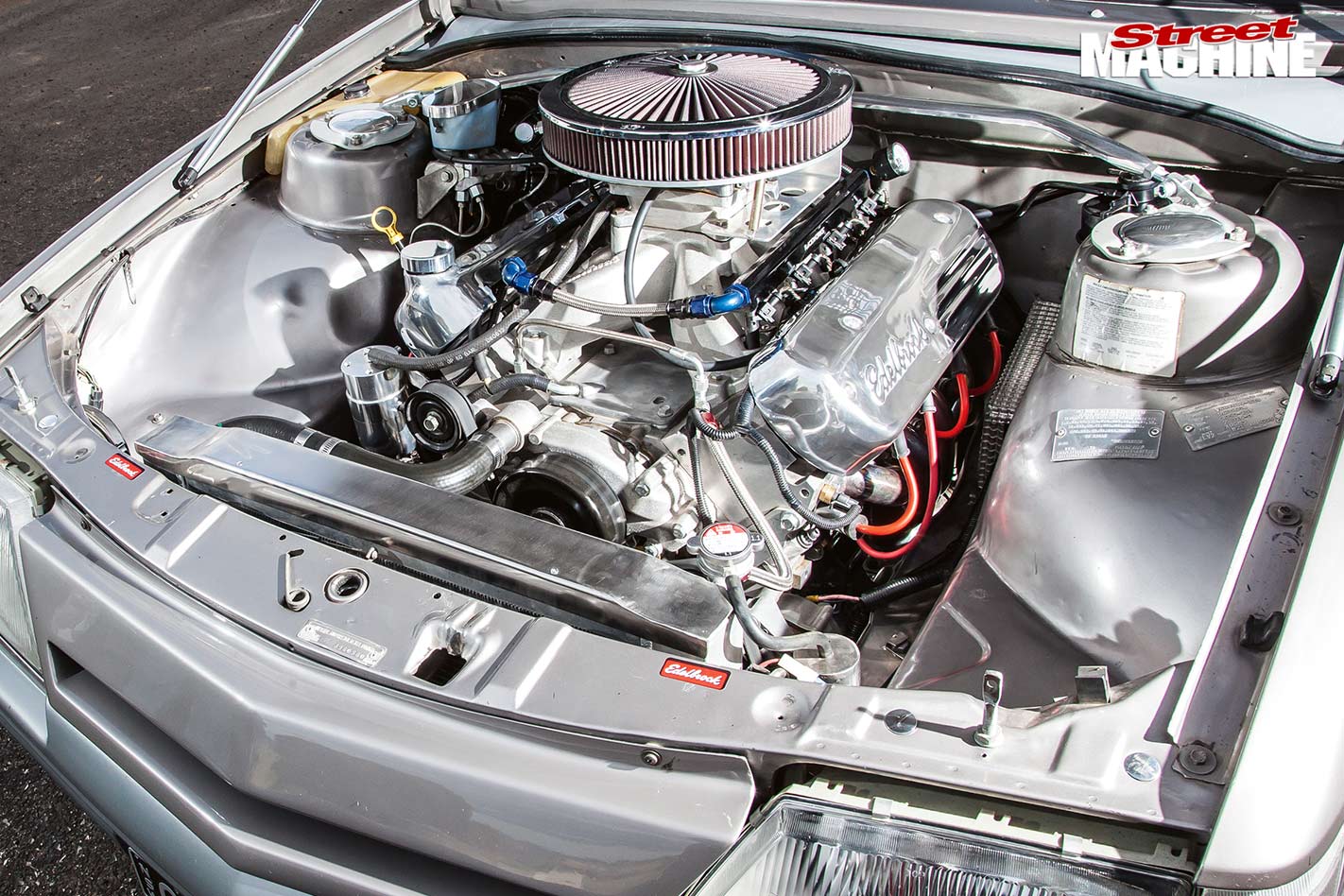 “The way the engine looks suits the era of the car; it’s a little bit old-school,” Pete says. It also makes a commendable 449hp the old-fashioned way – with cubes, cam and compression!

The car was more than the sum of its parts, but it wasn’t LS-powered, and when Tony happened across a cheap ex-VE L98 that had been drowned, he set out to correct that. He had a local machine shop clean up the block, then got to work on building a 408ci stroker to a budget.

“It has entry-level internals, a hydraulic cam and standard heads and rockers, so it goes pretty well for what it is,” Tony says. 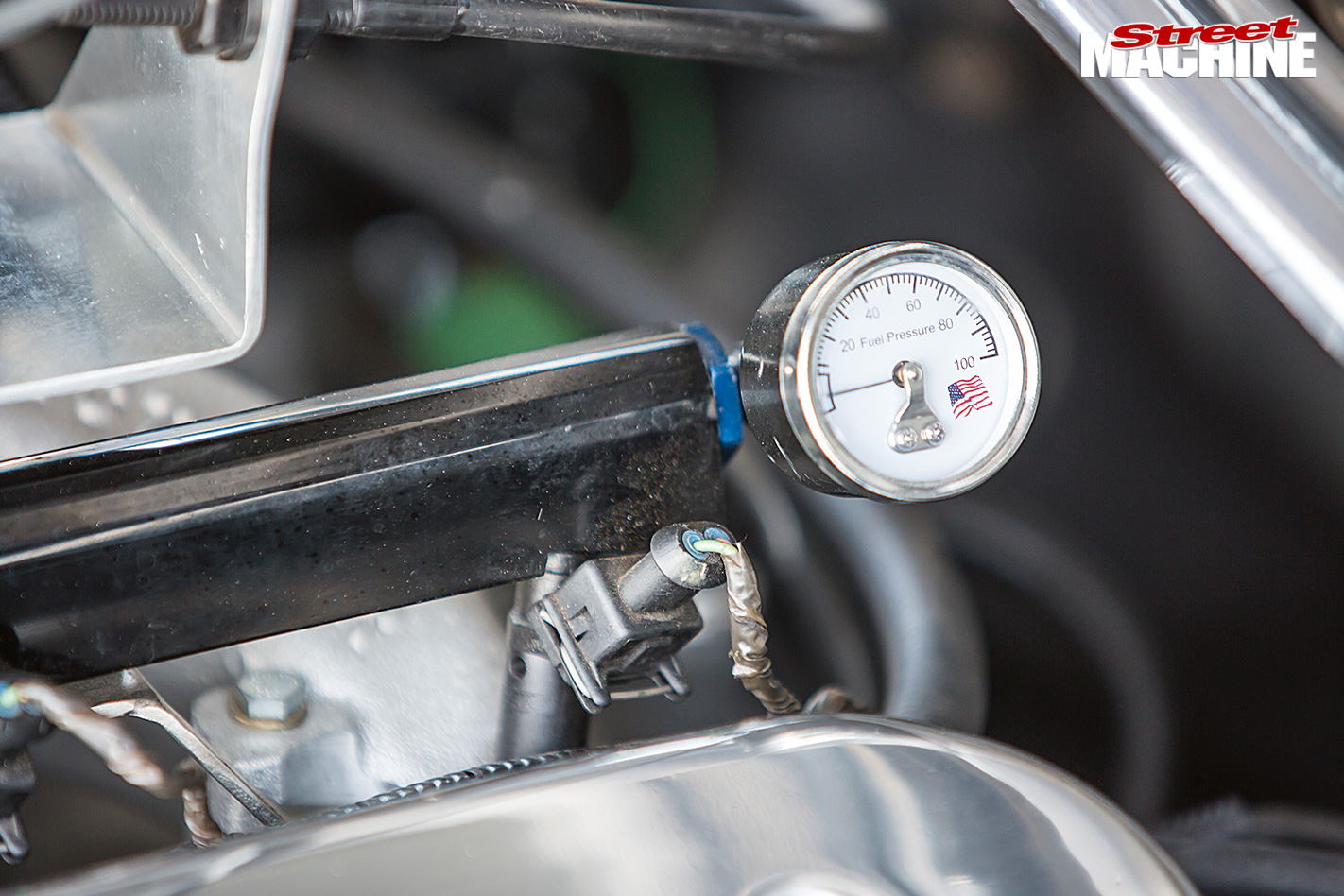 A Lunati crank and rods were used along with SRP flat-top pistons, while the cam was a left-over from one of Tony’s other projects. The heads were treated to a quick pocket-port job and a set of heavy-duty springs, then bolted down tight. An Edelbrock Victor Jr and FAST 2000cfm throttlebody were used, along with a set of block-hugger headers, modified by Tony to clear the tight confines of the first-generation Commodore engine bay. Backed by a Powerglide with a 3000rpm Slingshot converter and a nine-inch diff, the car went 11.0@129mph – quick, but not quite what Pete and Tony thought the car should be capable of. 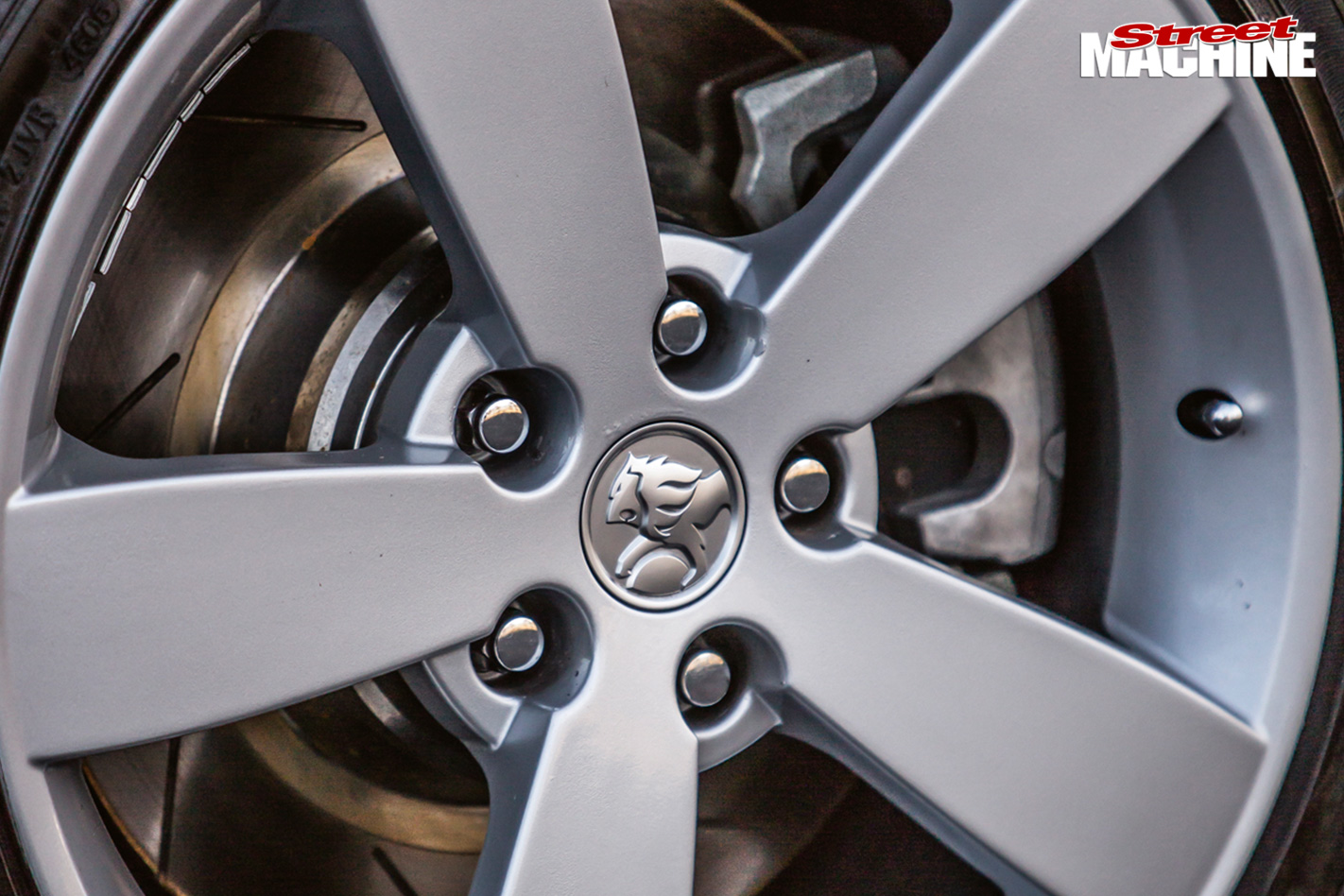 The front brakes on the VK are 350mm rotors and twin-piston calipers off a VE. Tony machined the components to adapt and fit them, making for a very cost-effective upgrade

“Dad pulled the motor to see if there were any gains to be had,” Pete says. “The original cam that went into it had been earmarked for a turbo application; it worked, but it wasn’t a great match for the manifold and converter. 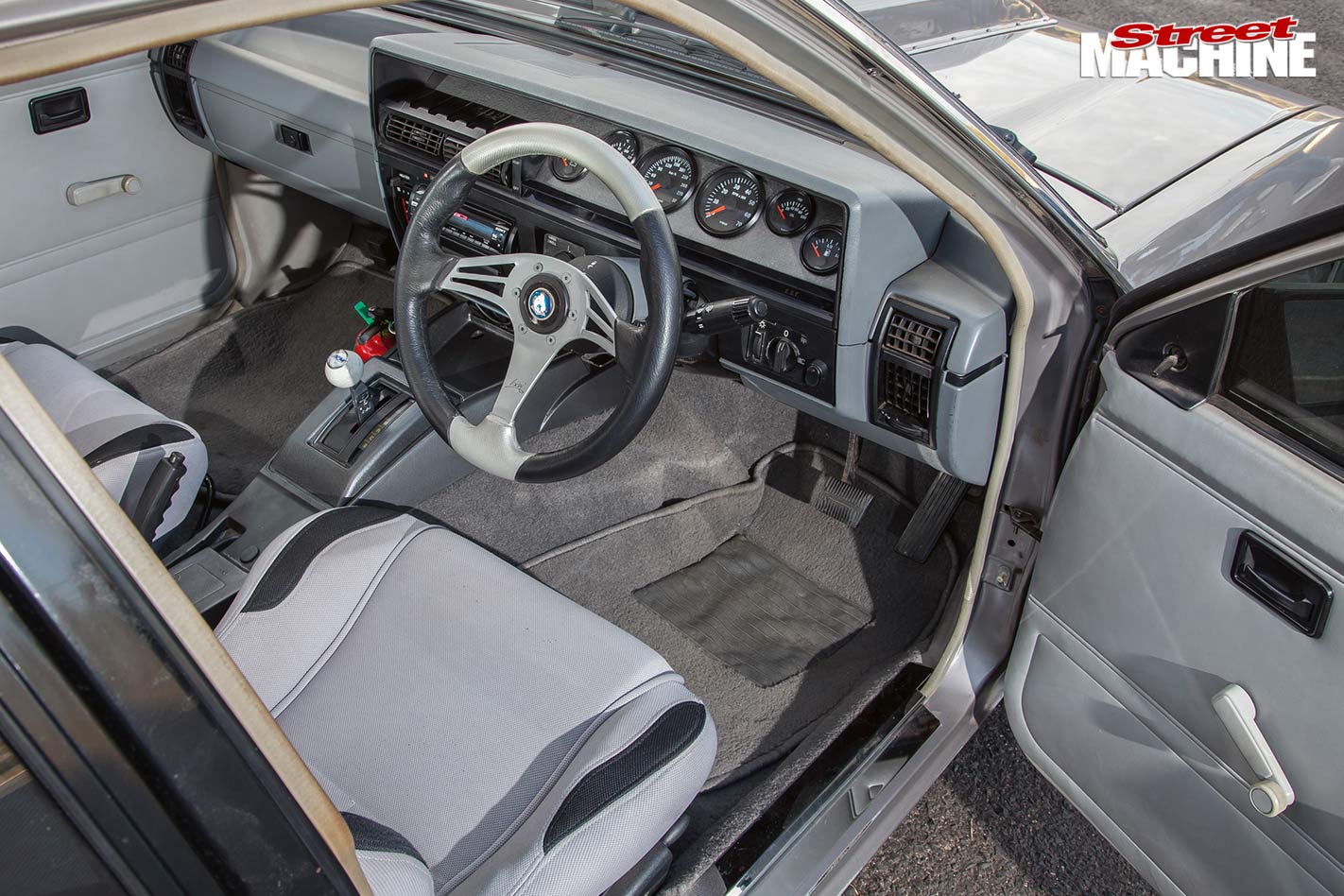 “It made a huge difference. It picked up another 30rwhp to 449rwhp, but the car feels much stronger right through the rev range and comes onto its power much better.”

After towing the car from his home in Bathurst all the way to Sydney Dragway for a recent street meet, Pete only got one pass on the new set-up. 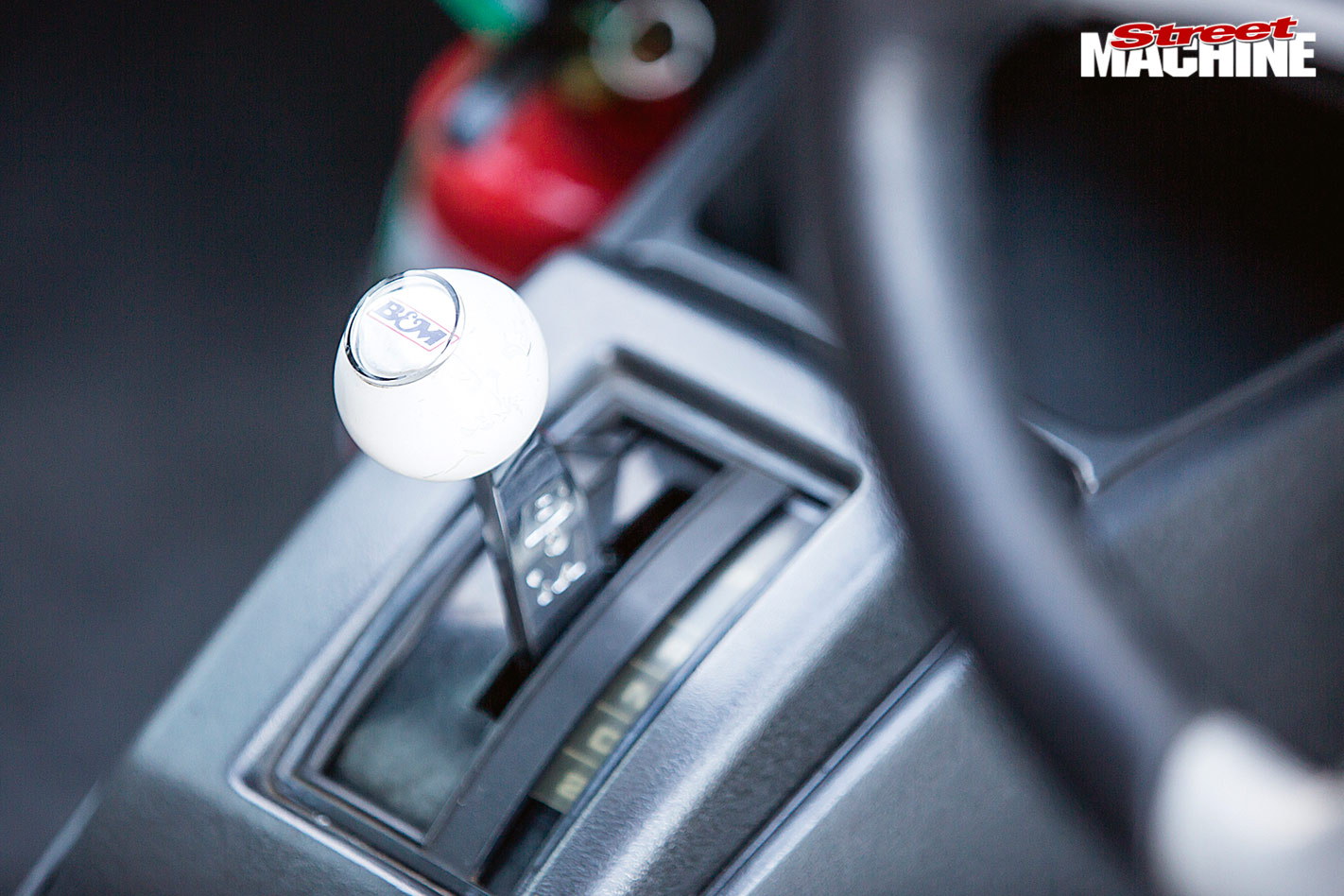 “It managed a 10.63@131mph, and I was over the moon,” he says. “We were hoping for a high 10, so it was a good result. With practice and a few more passes, it might go a bit quicker, but now it needs a ’cage and a tech inspection, which is a good problem to have!”

Until then the VK will continue to see plenty of road miles, with Pete’s own sons Sam and Harry always enthusiastic passengers whenever there’s weekend cruising to be had. Looks like it might be genetic! 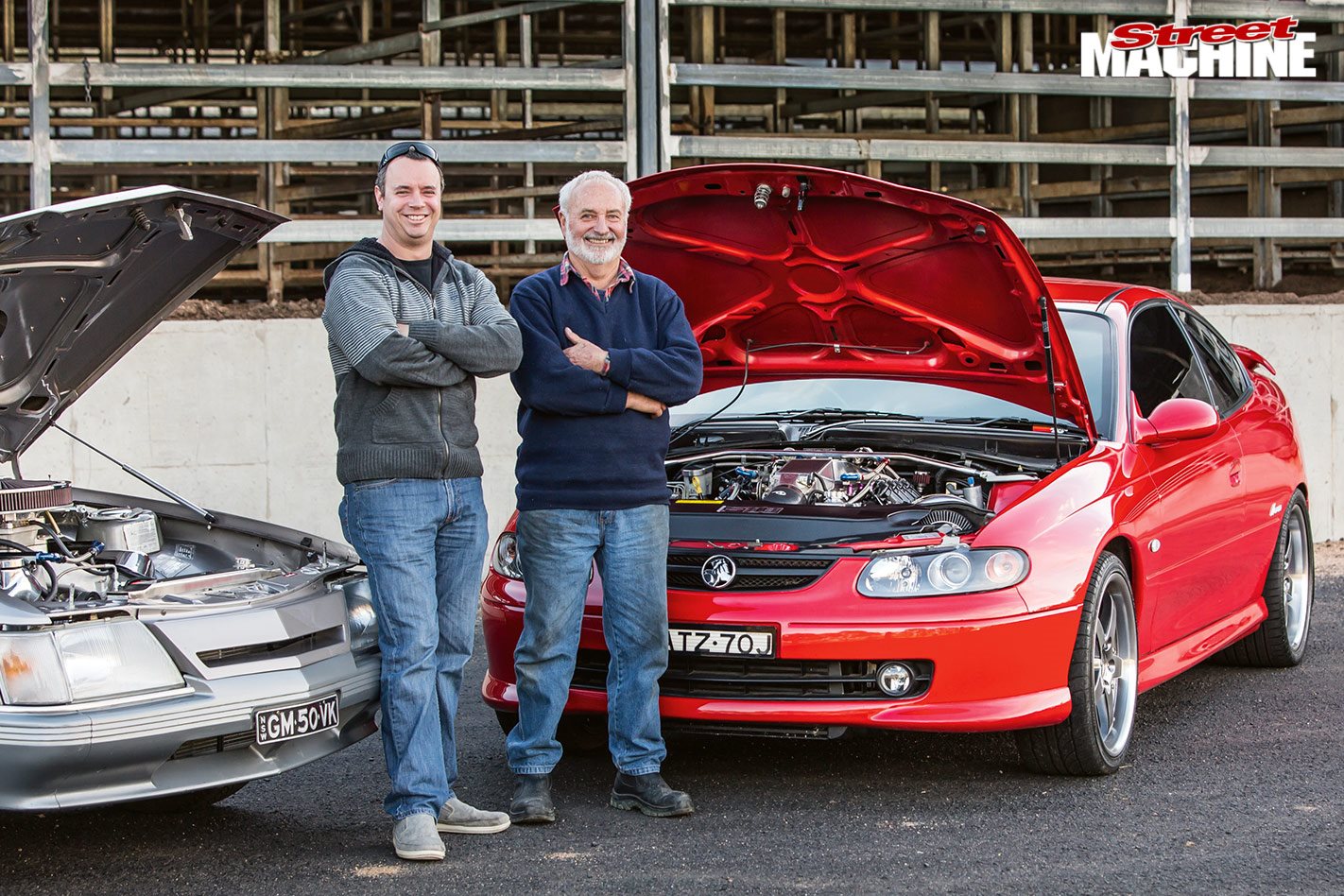 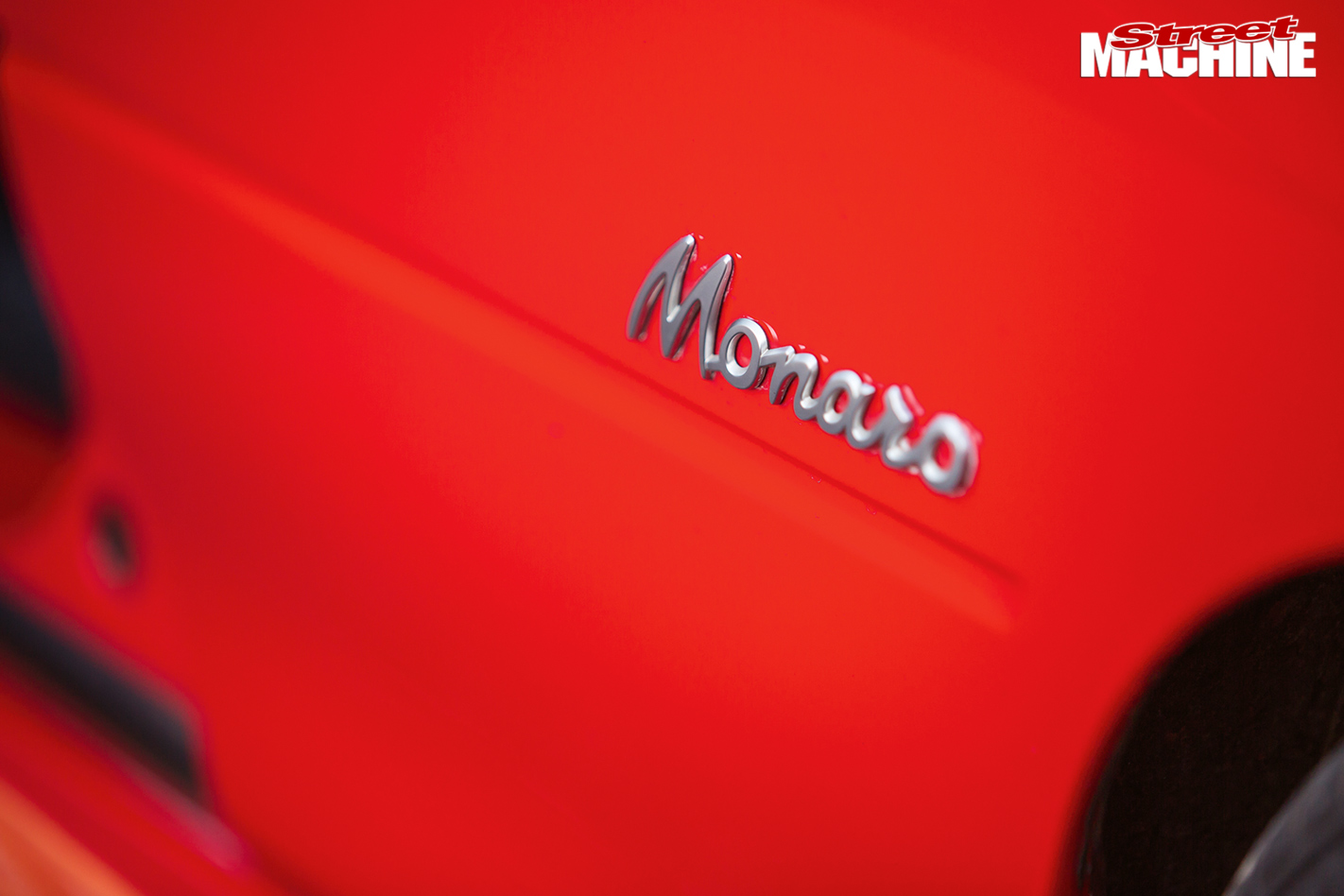