Benny Leat's Holden VH Vacationer might not look all that modified, and with 364hp getting sent to the rear wheels, that's kinda the point

BEN Leat, the owner of this VH Vacationer wagon, planned to build his car to be a summer cruiser and then flip it when the time was right. Like most car builds, they always begin with the best of intentions. But the old ‘Yeah, nah, I’ll just do a few things to make it a cruiser’ spiel you sell yourself; that never lasts. 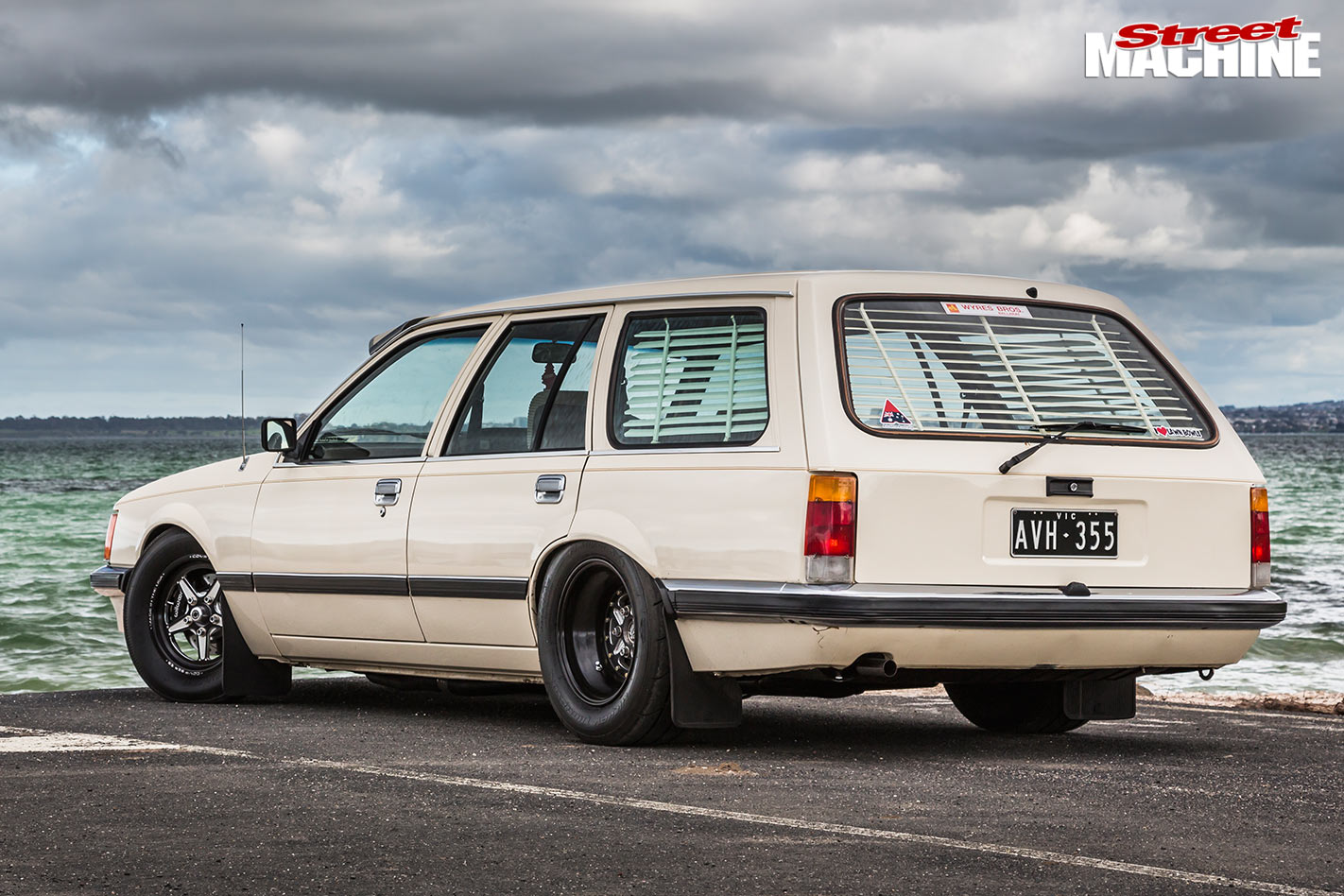 If you think you’ve seen the number plates before, you’d be right. Ben used to own a red VH (SM, Jun ’16) that sported a mean Holden 355. Ben tells us it wasn’t long after the red car was featured that he sold it off as a roller. 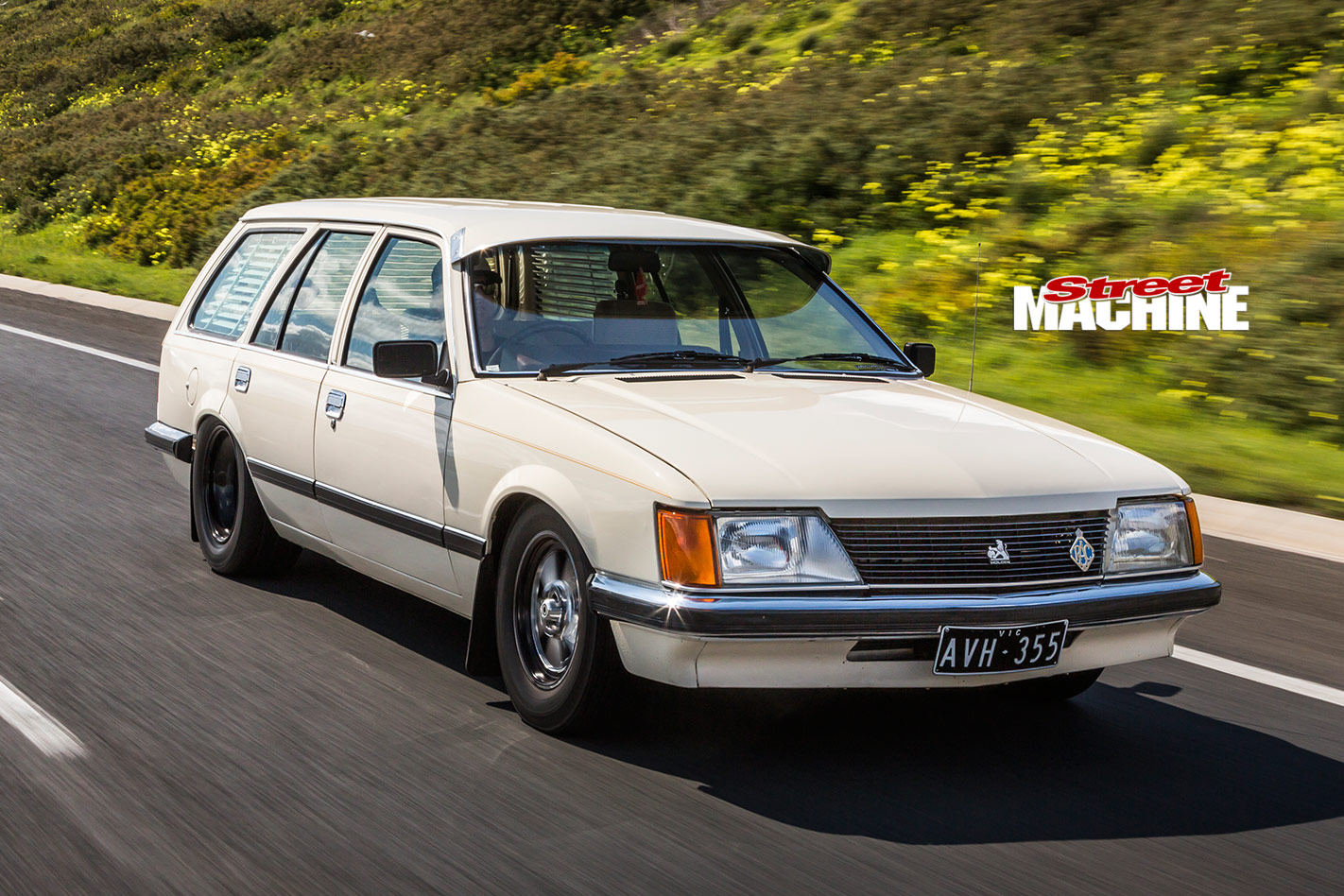 “I sold it just after I got a roadworthy on the wagon,” Ben says. “I bought it from a guy in Ballarat who obtained it from the original owner, who had passed away.”

The car sat in Ben’s shed for a few weeks until he figured out what he would do with it. 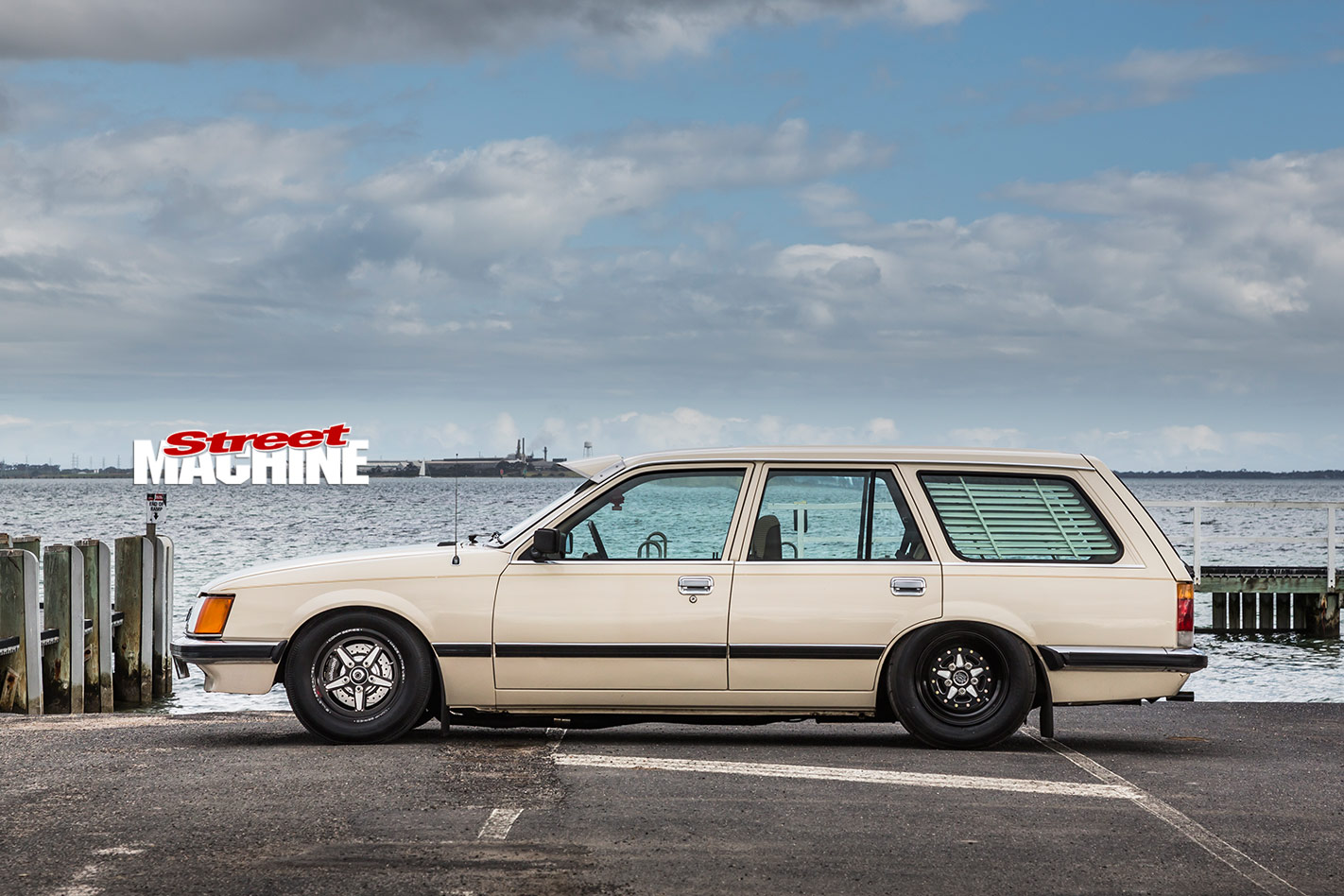 The outside of the Vacationer is about as visually stock as it gets. The giveaway that it houses a whole new drivetrain is purely down to the wheels and its stance. It’s fair to say this old wagon has certainly held up well over its 35 years

“I began to tidy it up,” he says. “The paint was all original apart from a touch-up on the bonnet, and all it needed to look neat was a massive clean-up.” 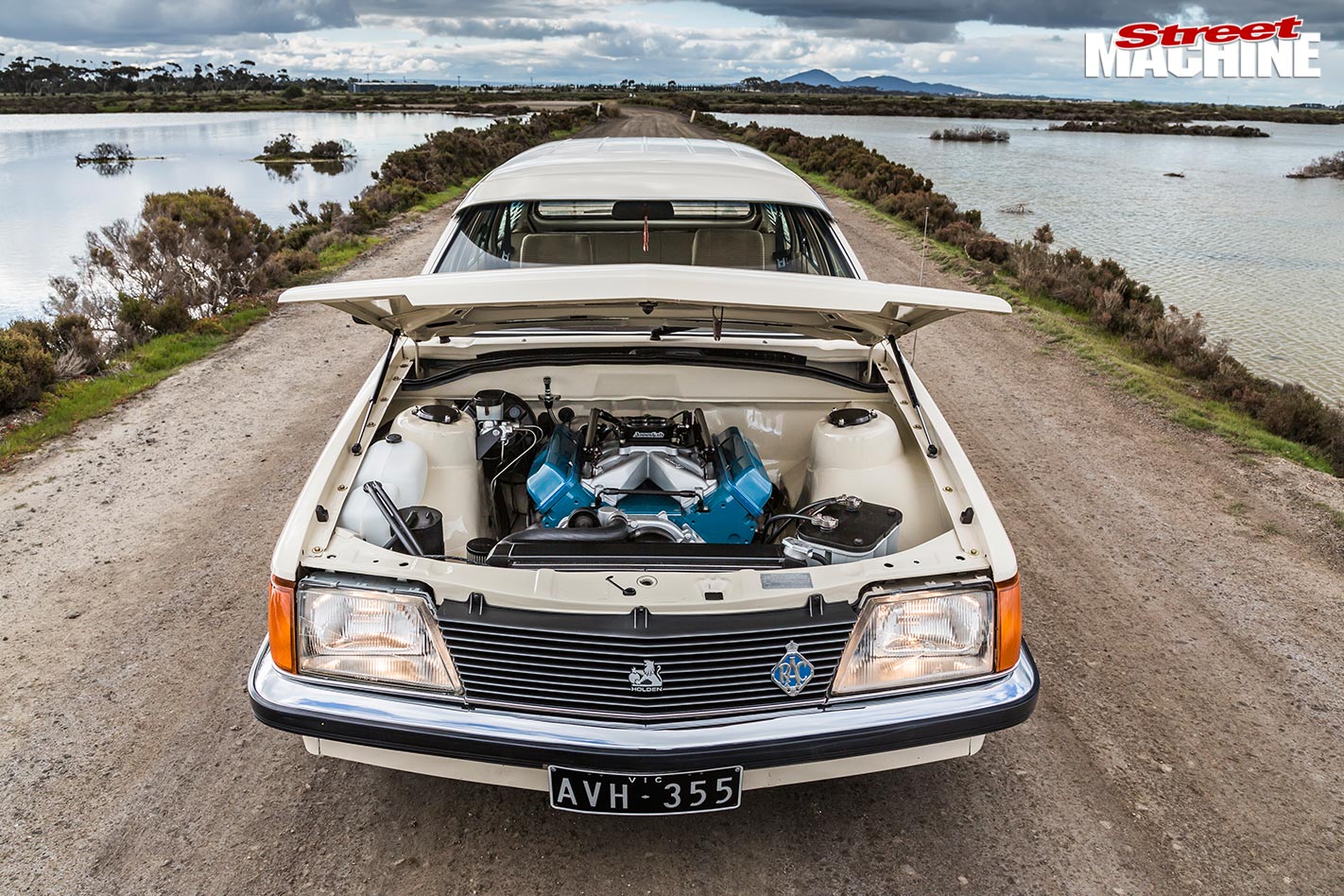 Ben fitted up new suspension, as the wagon’s factory set-up had seen better days. A set of new SSL King Springs were put in, as well as Monroe gas shocks up front and Pedders short-travel items in the rear. The rear end also got a new adjustable Panhard rod and adjustable upper arms. 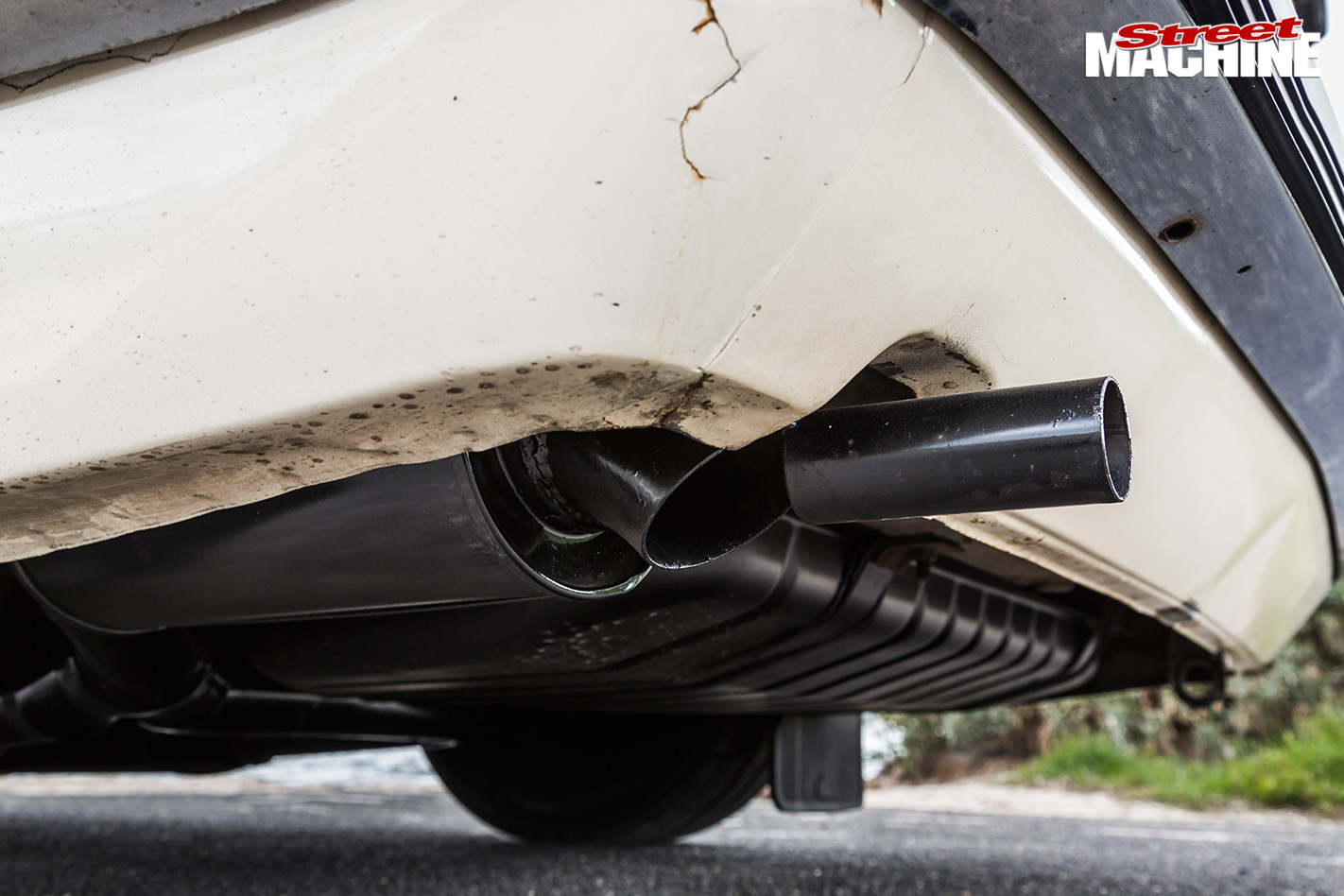 The front brakes were replaced with a set of Wilwood four-piston stoppers, while the rear items were upgraded when Ben swapped out the car’s original diff for a VS Commodore wagon BorgWarner unit built by Matt at Geelong Diffs. 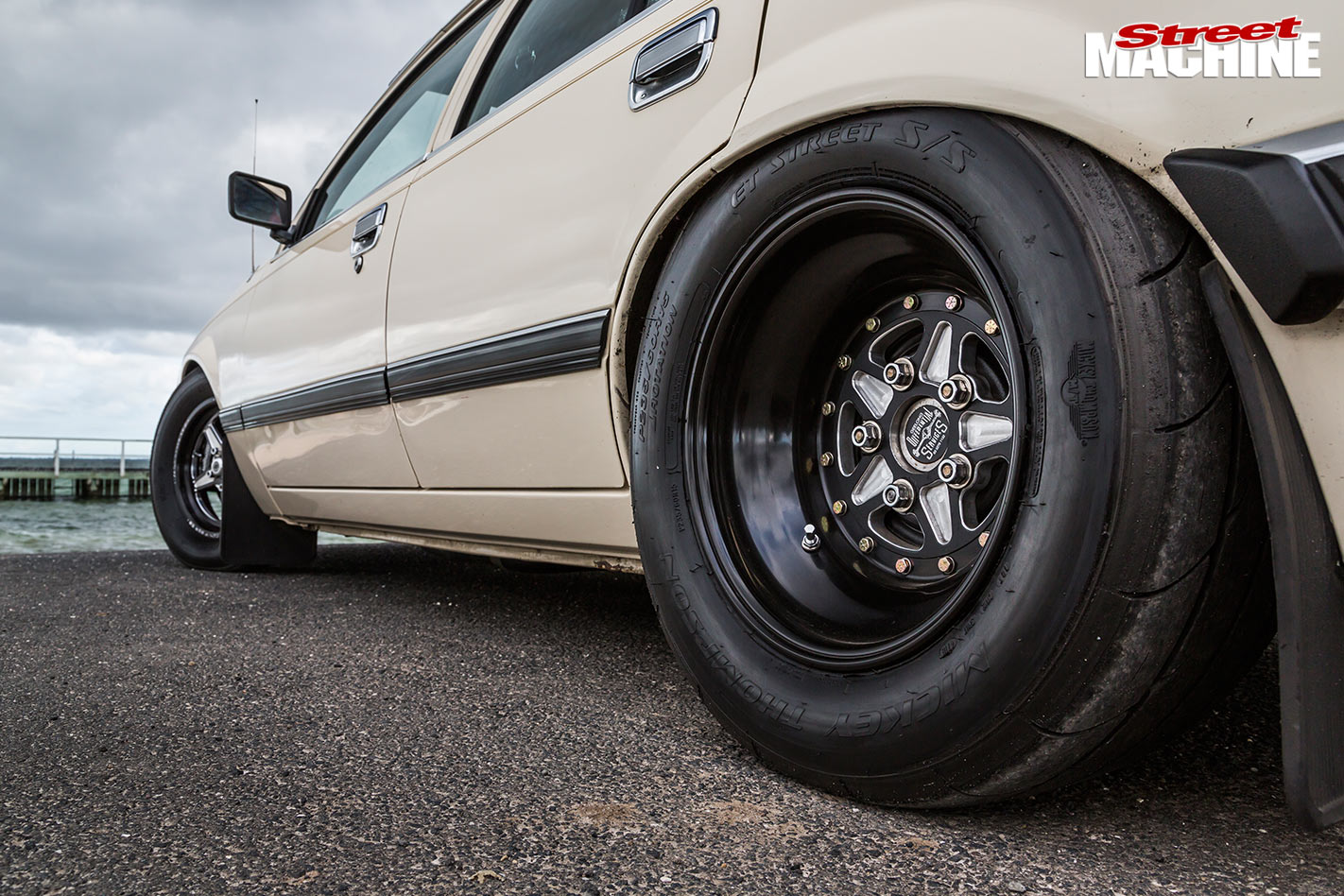 The 15x3.5in Billet Specialties Comp 5 Series wheels up front and 15x8in Weld Racing items in the rear give the VH a menacing look. If you peak through the front spokes you’ll notice a set of Wilwood calipers, too. Packing 364hp at the wheels, the Vacationer certainly makes use of the braking power

The VH’s original wheels were ditched in favour of 15x3.5-inch Billet Specialties Comp 5 Series rims for the front, and 15x8-inch Weld Racing items out back. Ben tells us that with the VS Commodore wagon diff bolted in, 235/60/15 tyres are about as big as he can fit without tubbing the rear. Since the photoshoot Ben has installed an airbag system out back so he can raise and lower the rear to suit the road conditions. 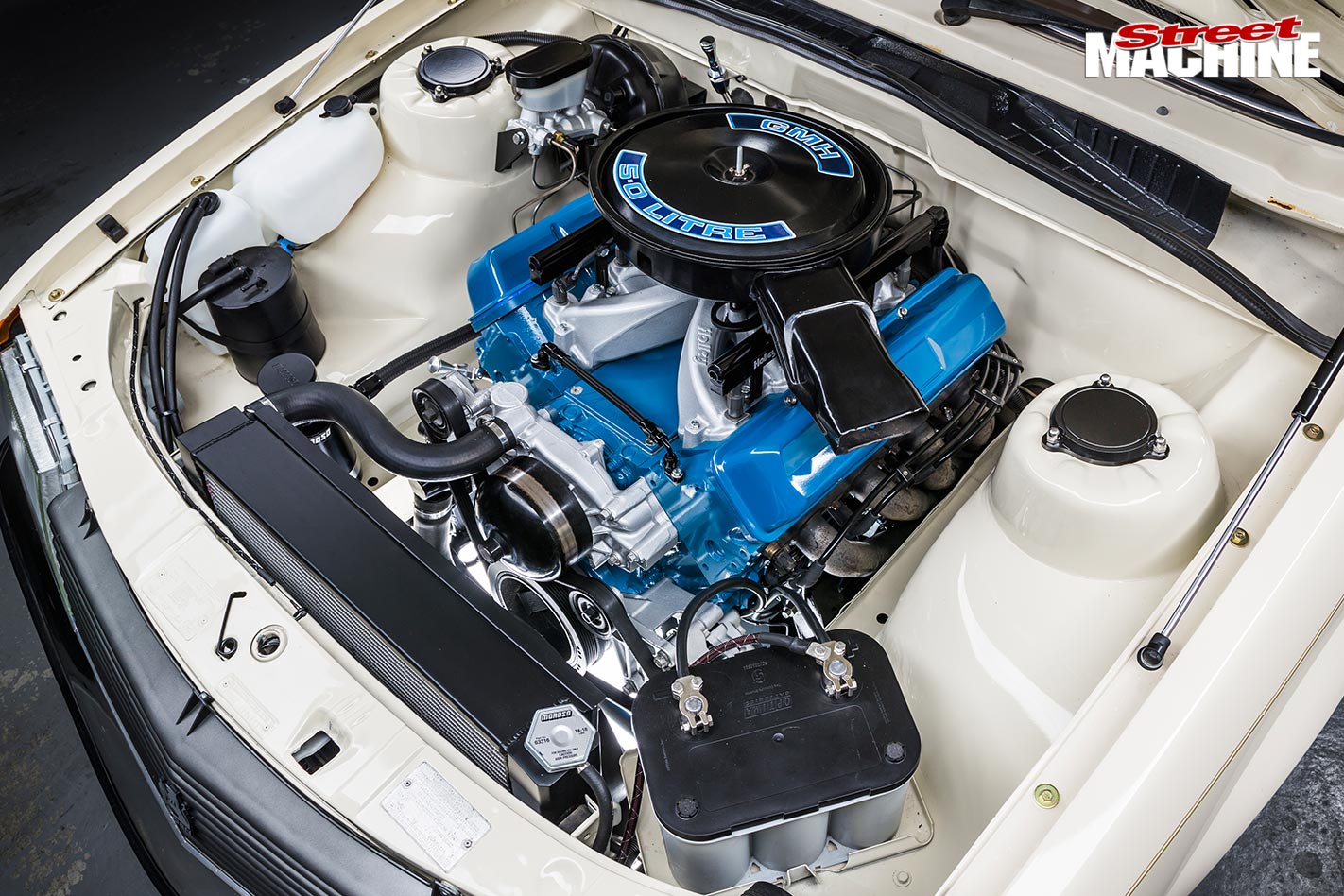 After considering putting in a 355ci Holden V8 and even a 3.0-litre turbo VL Commodore motor, Ben decided on doing an LS1 conversion. Though not just any conversion – an injected LS1 that looks like a carby-fed Holden V8

“The VH originally had a 202ci and a Trimatic gearbox,” Ben says. “It had power steering and air con, and it even had cruise control. But eventually the 202ci started to feel really tired. Plus the car was looking fast with the new wheels, brakes and suspension; it needed the power to match. 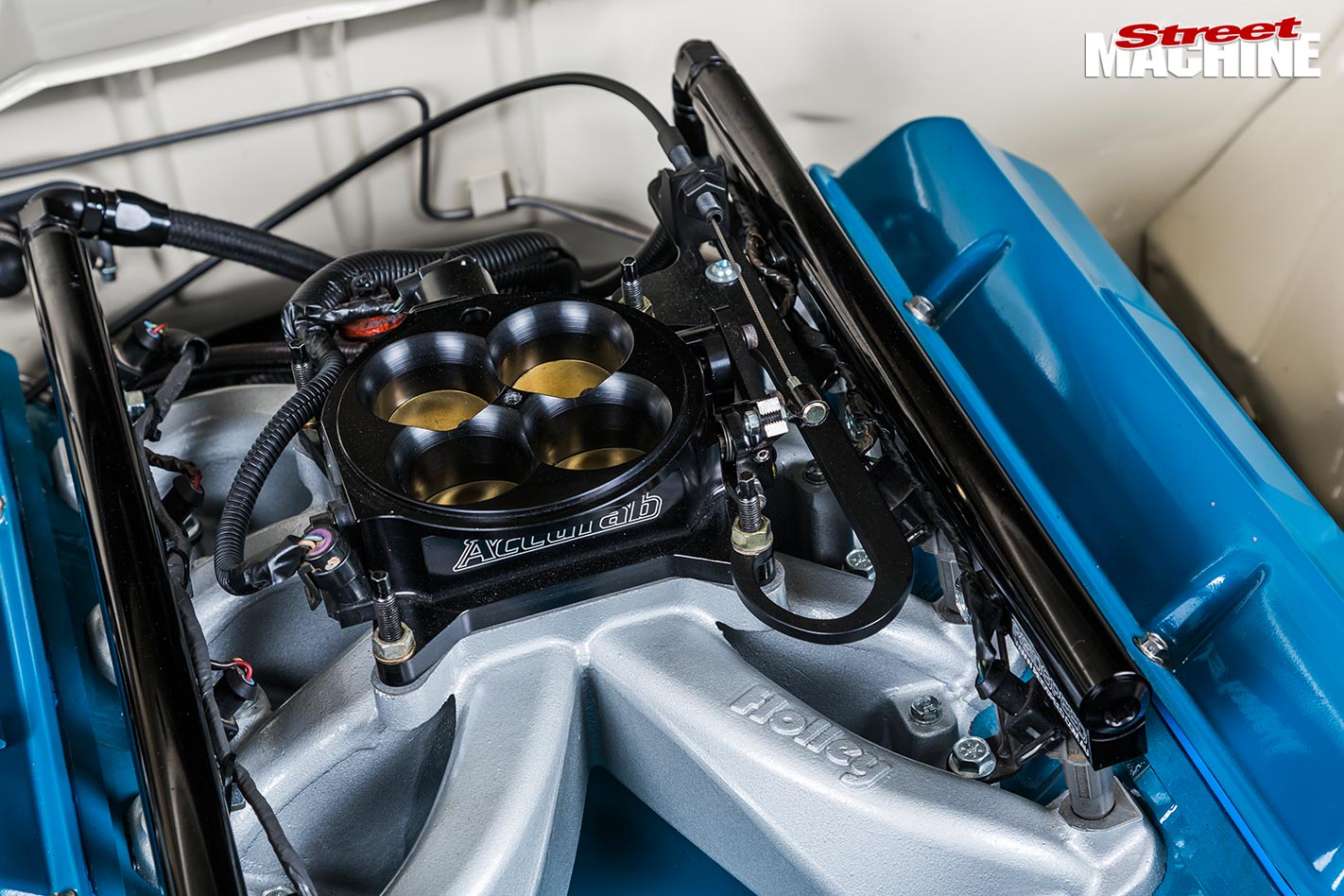 “Originally I was going to put the 355ci Holden motor out of the red VH I'd had, but I ended up selling that engine as well. At one stage I was thinking about putting a 3.0-litre turbo motor out of a VL, but I couldn’t find anything decent.” 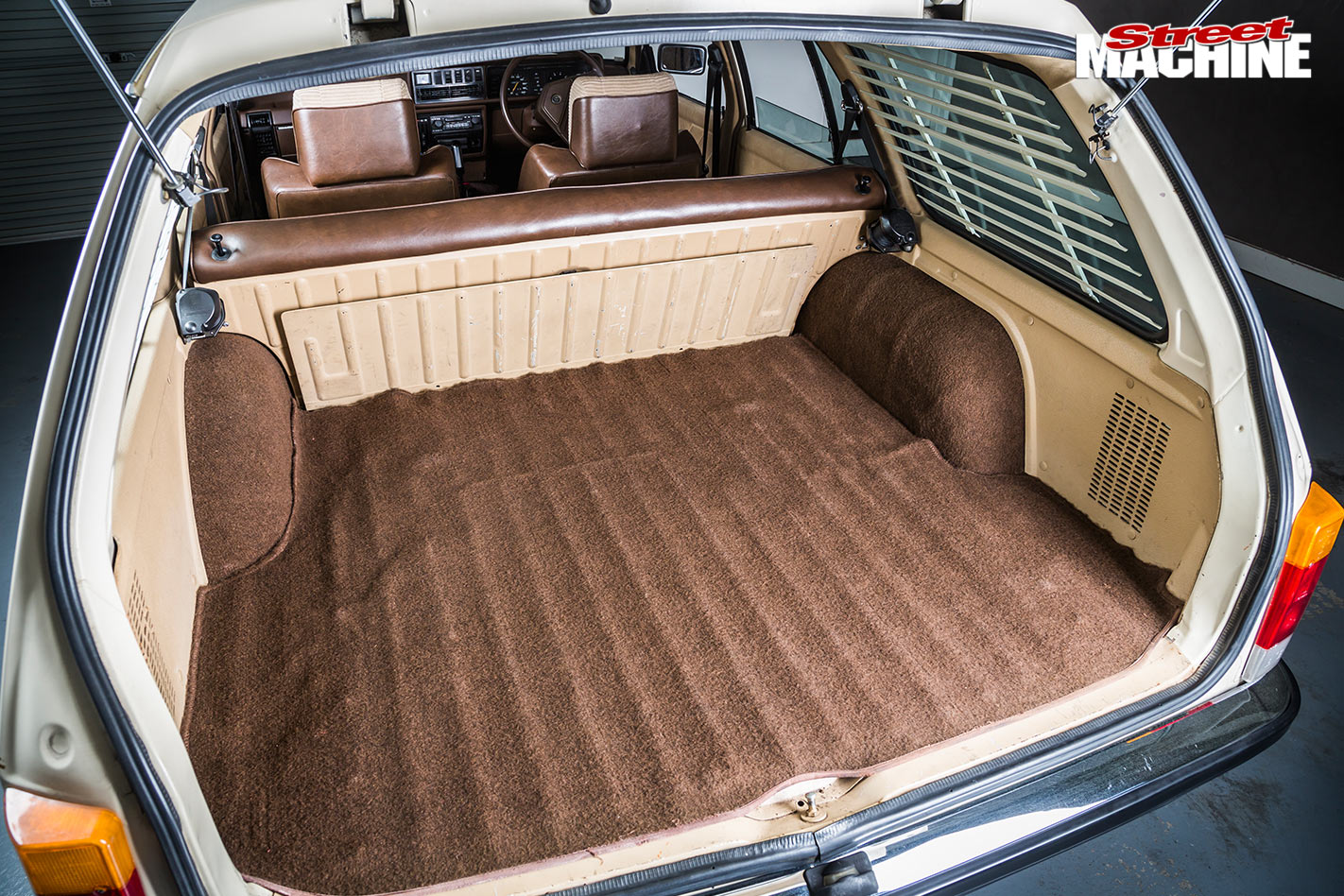 In the end Ben stumbled upon a VX Calais that had been hit in the front. It had the LS running gear he was after, so it was a no-brainer to buy the whole car rather than just the parts he needed. 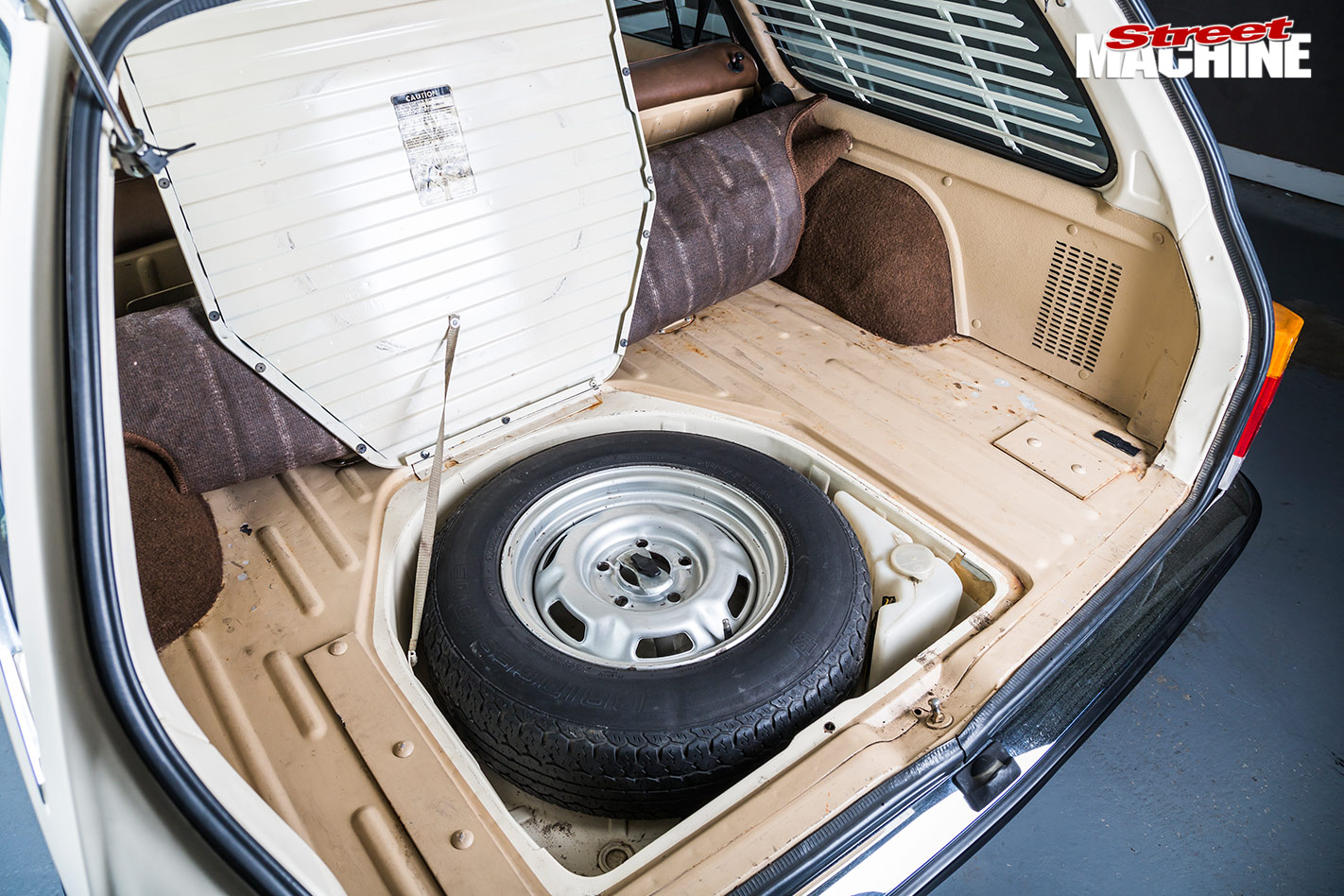 “I took it home and got everything I needed for the conversion and sold off the rest,” Ben says. “Once I got the motor out of the car I stripped it all down and cleaned everything and gave it to my mate Tim Holmyard. He races a pretty wild VX SS and is a bit of an engine builder. He’s also a legend bloke, so that was the best way to go.” 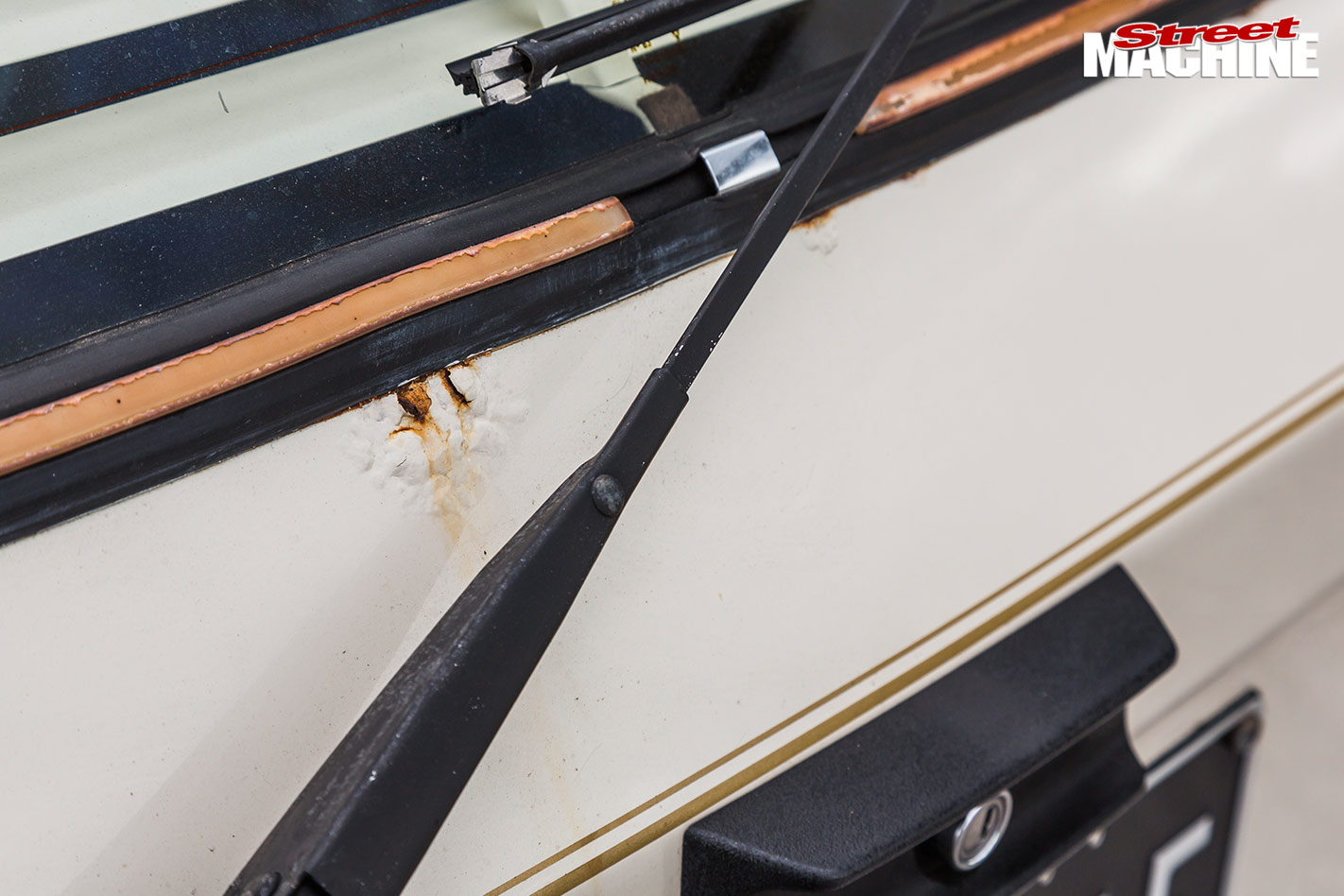 The engine was freshened up with a set of new pushrods, a new COMP 234/236 112 LSA camshaft, a Melling oil pump, new COMP Cams lifters, new gaskets, and 30thou was shaved off the stock LS1 heads. The motor was also treated to a trick new Holley mid-rise intake and an Accufab 1250cfm four-barrel throttlebody. 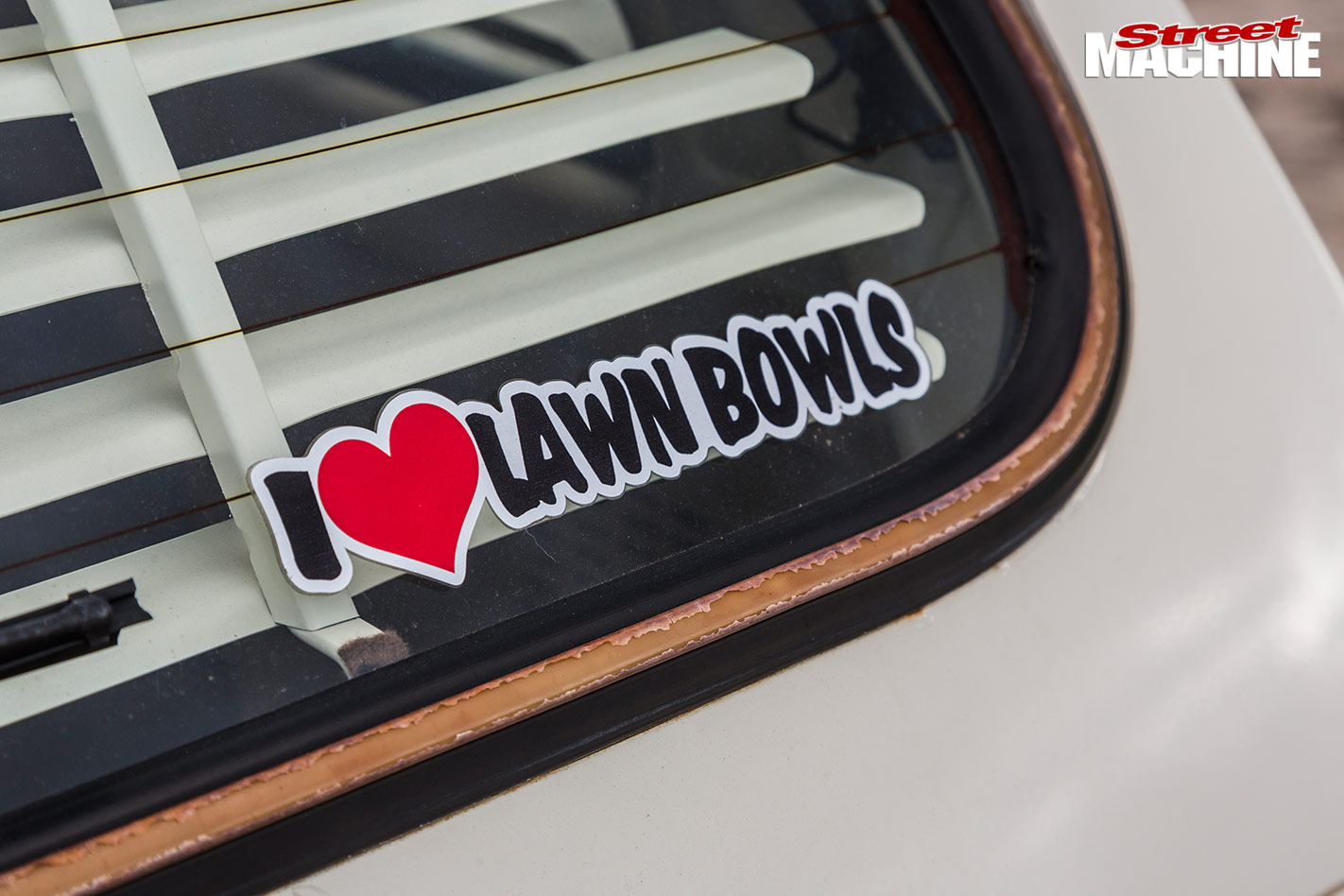 Ben had DTM Automatics build a fresh Turbo 400 to suit his new motor. The gearbox is fully manualised and runs a Dominator 4500rpm eight-inch converter. Ben tells us the converter helps the LS1 quickly move to where it makes power: up top. The tailshaft is a two-piece item from A1 Automotive. 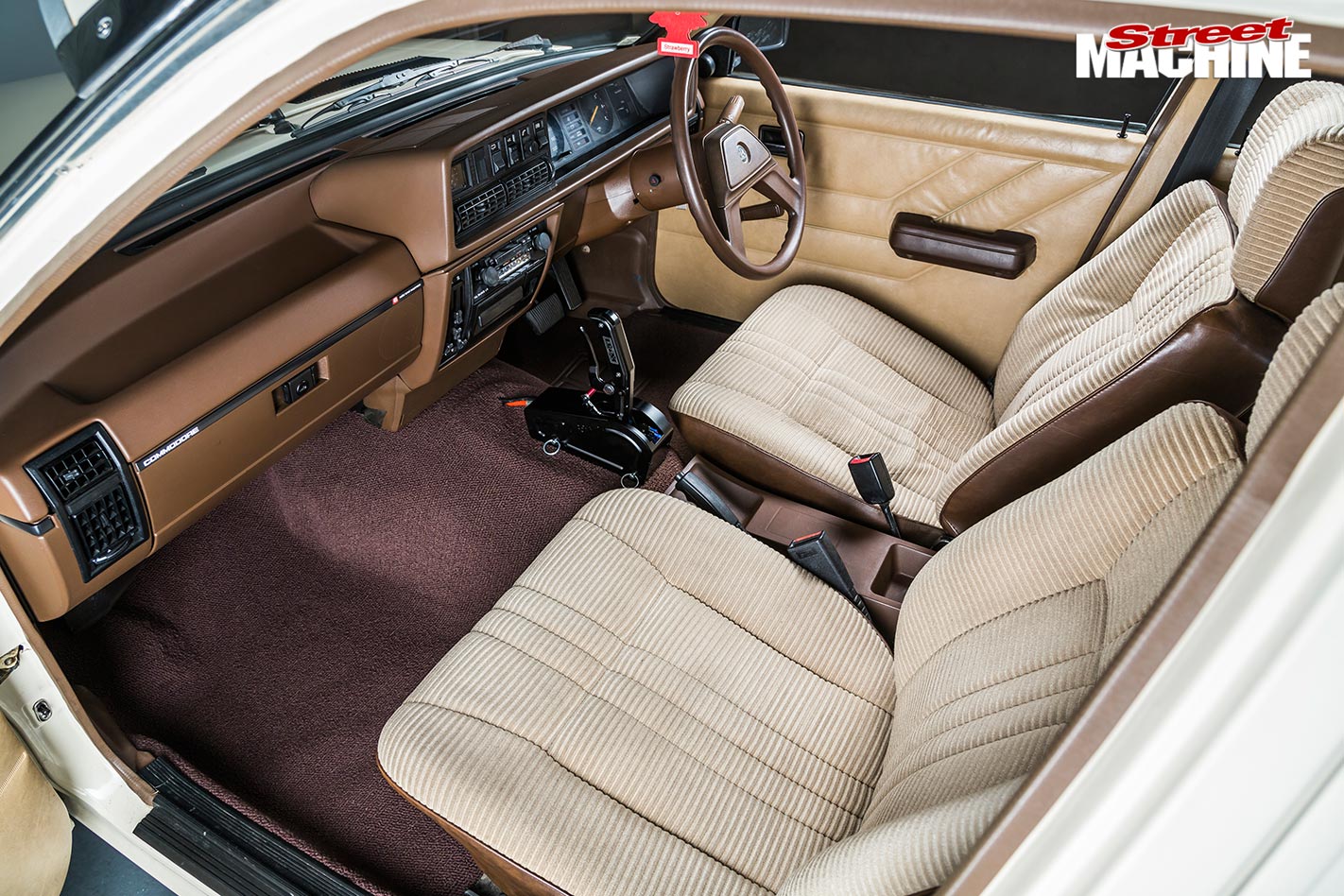 Other than fresh carpet and a B&M Magnum shifter, the interior is as it was in 1982. The original tape deck is still there, and the seats are in great condition

If you look at the engine bay you’ll notice that the motor, at least at first, doesn’t look like an LS at all. Ben went to a great deal of trouble to conceal the engine’s identity. And he’s done it well, custom-fitting a factory Holden 5.0-litre V8 air cleaner and using some blue paint to give the donk the classic look he wanted. 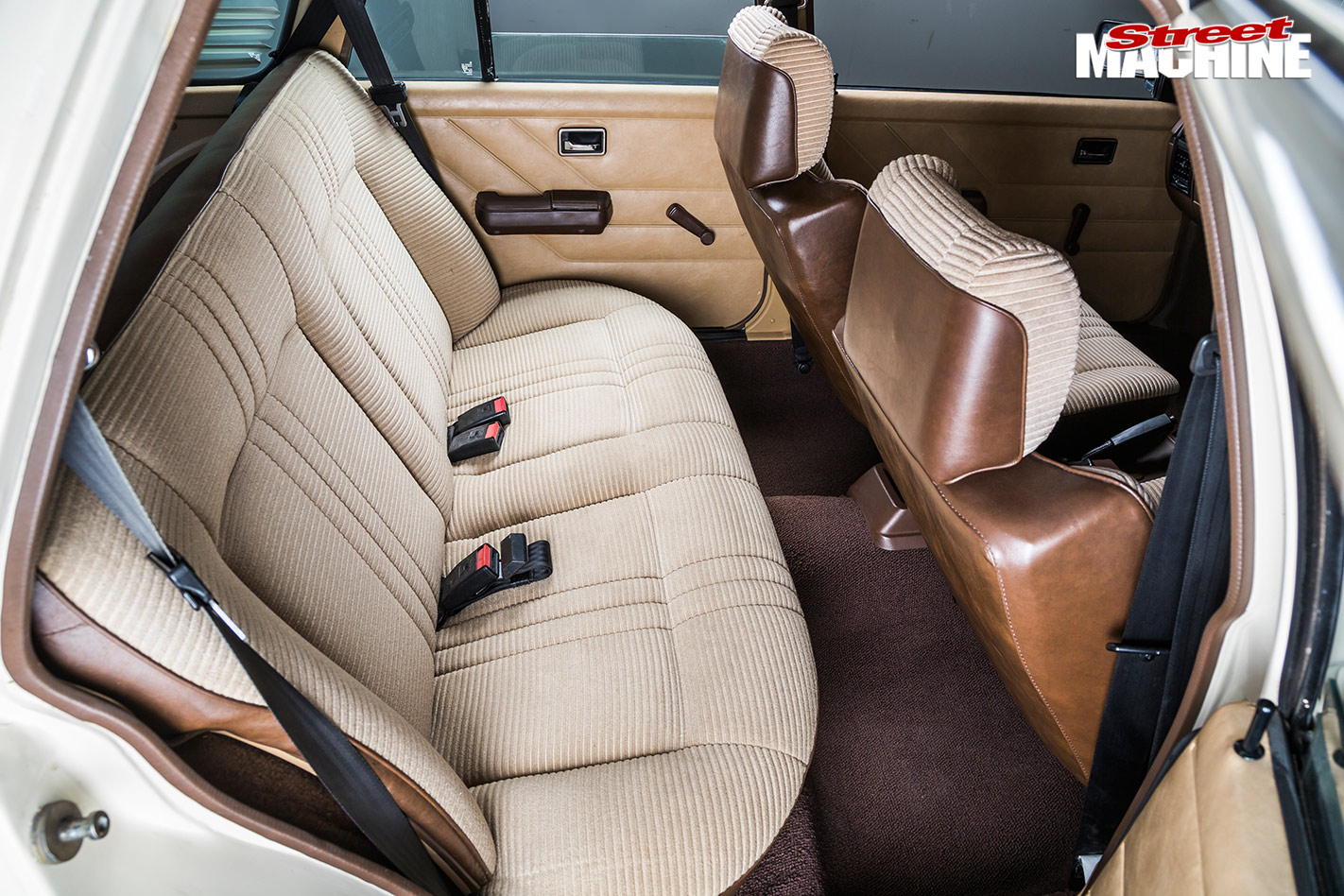 Much like the car’s exterior, the idea was to keep the interior clean and simple

Ben did most of the handiwork in the engine bay, tidying up all the metal and relocating what didn’t need to be there. The wiring is mostly hidden, and the usually visually dominant LS1 coil packs have been hidden under the dash. Once this was done, the bay was given a fresh coat of Torquay Sand. It’s fair to say Ben’s turned the usually messy-looking LS1 into a work of art. 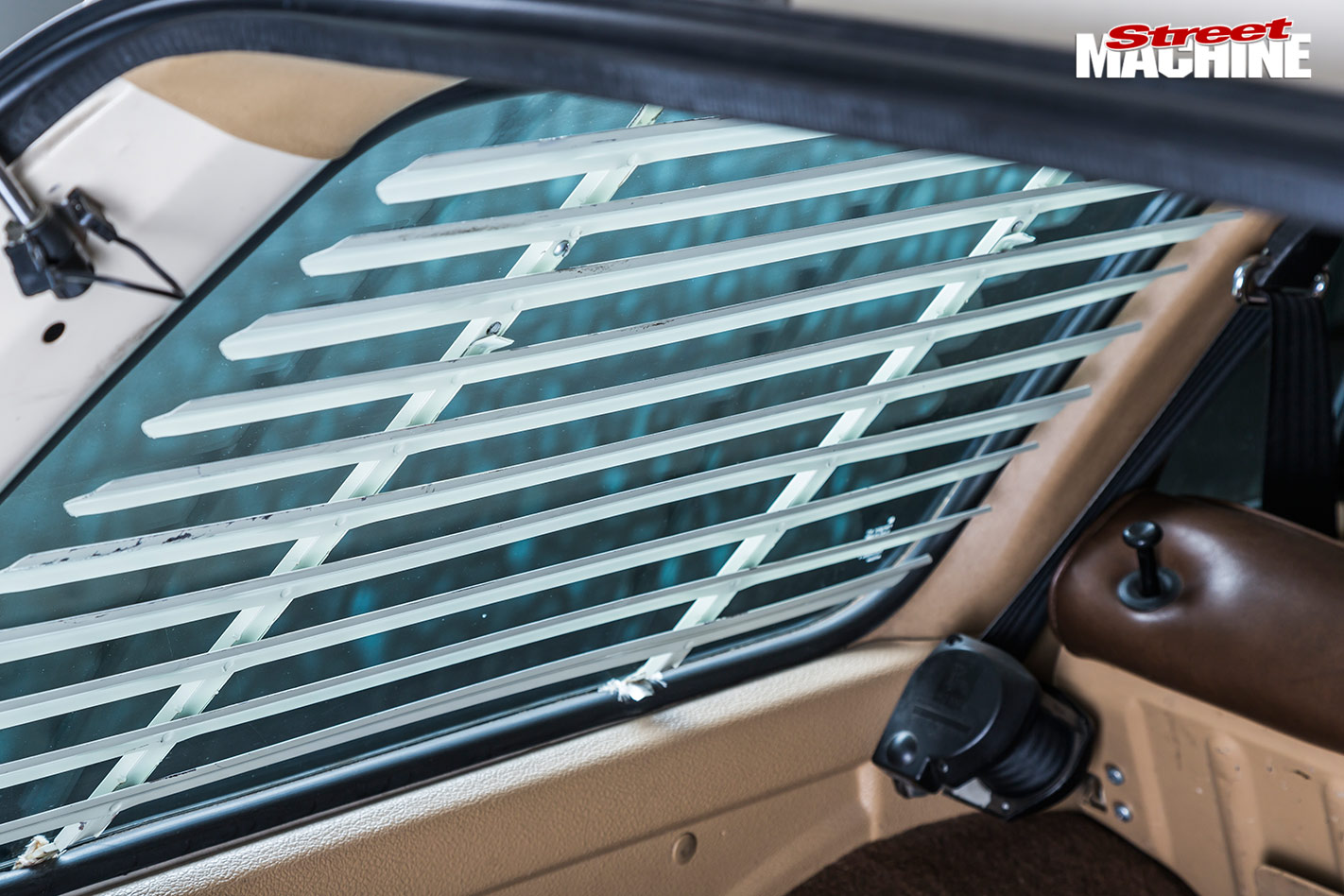 Ben tells us one thing the car lacked when the original 202ci was in there was noise.

“The car looked good, but the noise just wasn’t there,” he says. “Once the motor and transmission were in I had the car moved over to Moolap Mufflers, where Andrew fitted up custom-made four-into-one headers and a mild-steel exhaust – with a sleeper-spec pea-shooter out the back to boot!” 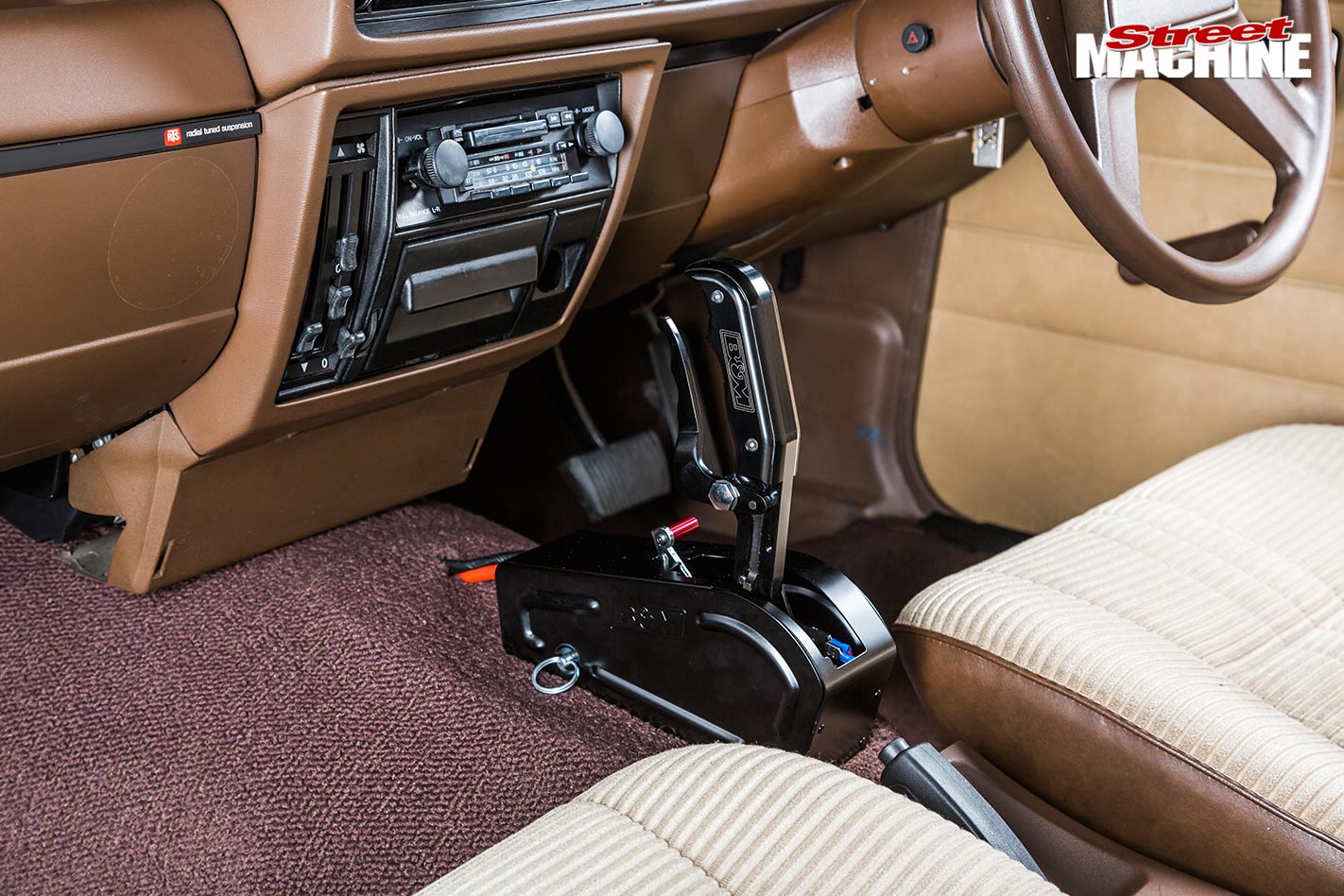 Andrew from Moolap then put the car on the dyno and tuned it to make 364hp at the wheels. 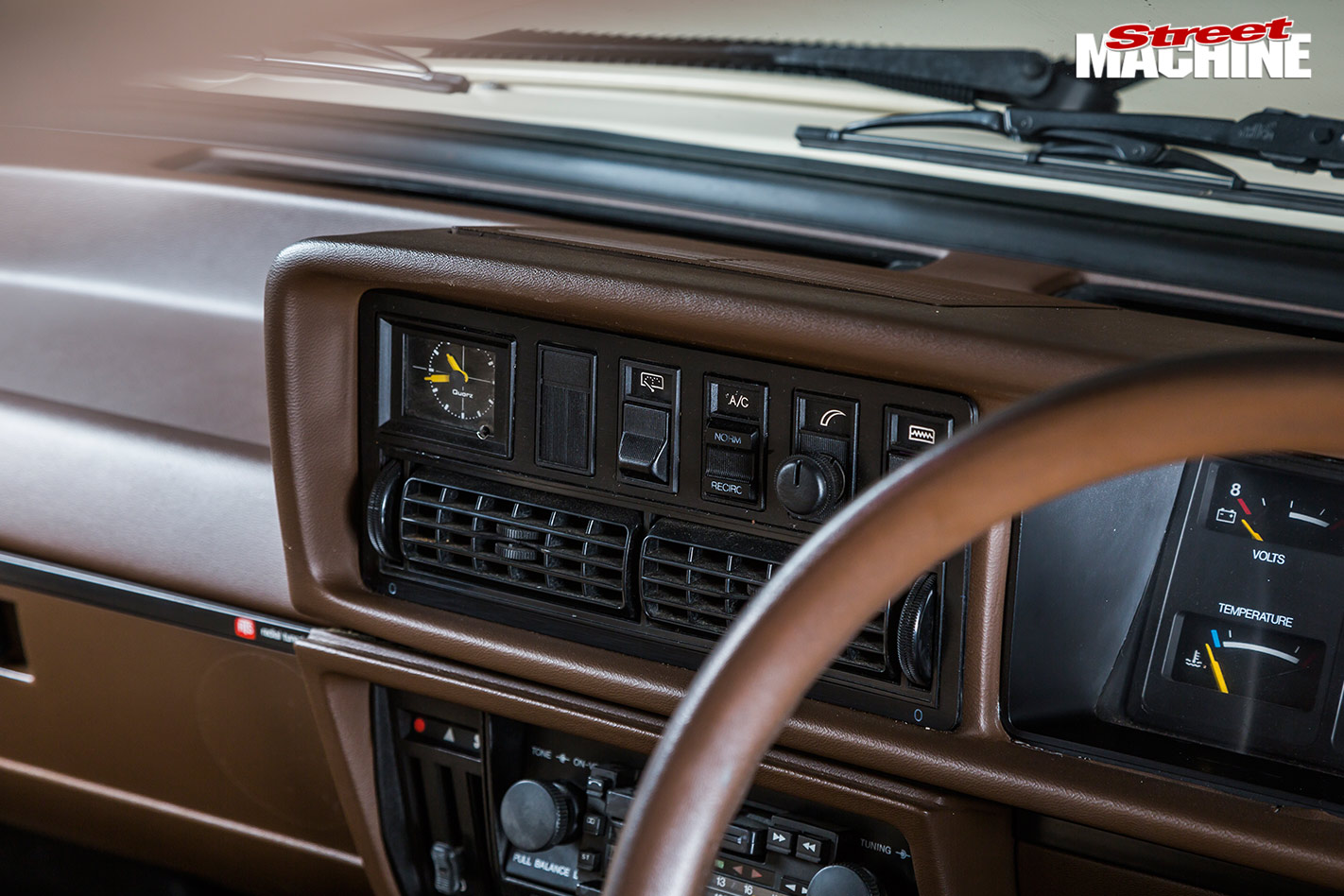 Ben likes that his engine bay is a conversation starter.

“I’ve had a few people scratching their heads, and then when you tell them it’s an LS, they’re like: ‘Oh yeah, I see it.’ Most people seem to figure it out pretty quick when they see the water pump.” 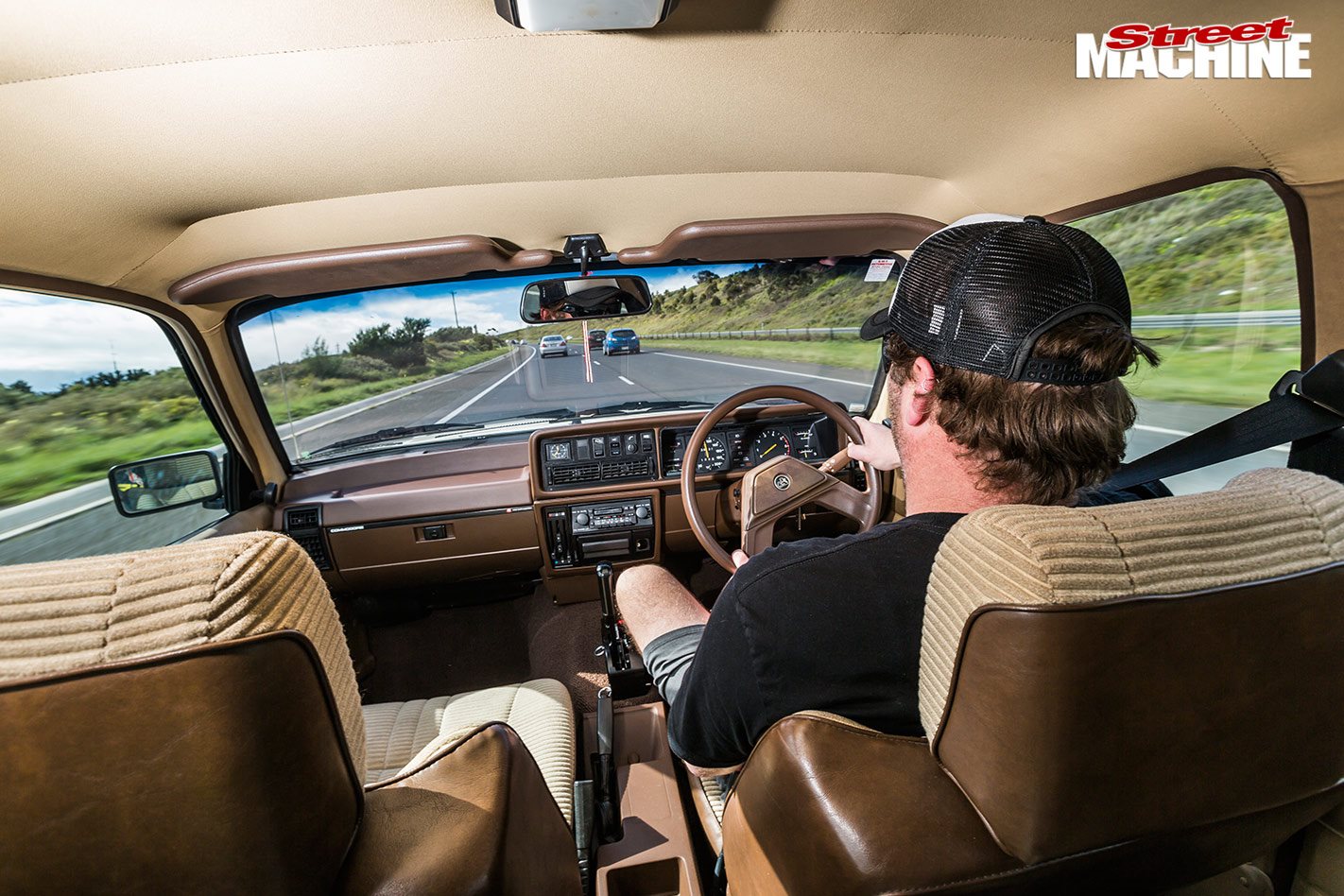 What Ben’s ended up with is a damn cool street car. The combination of the VH’s original look mixed with a tough stance and a mean set of wheels – not to mention a very healthy, retro-looking LS1 – makes it a special bit of kit. They certainly build them nice in Geelong.

In terms of giving the LS1 its retro look, Ben tells us there’s a bit involved, but it’s not too difficult. 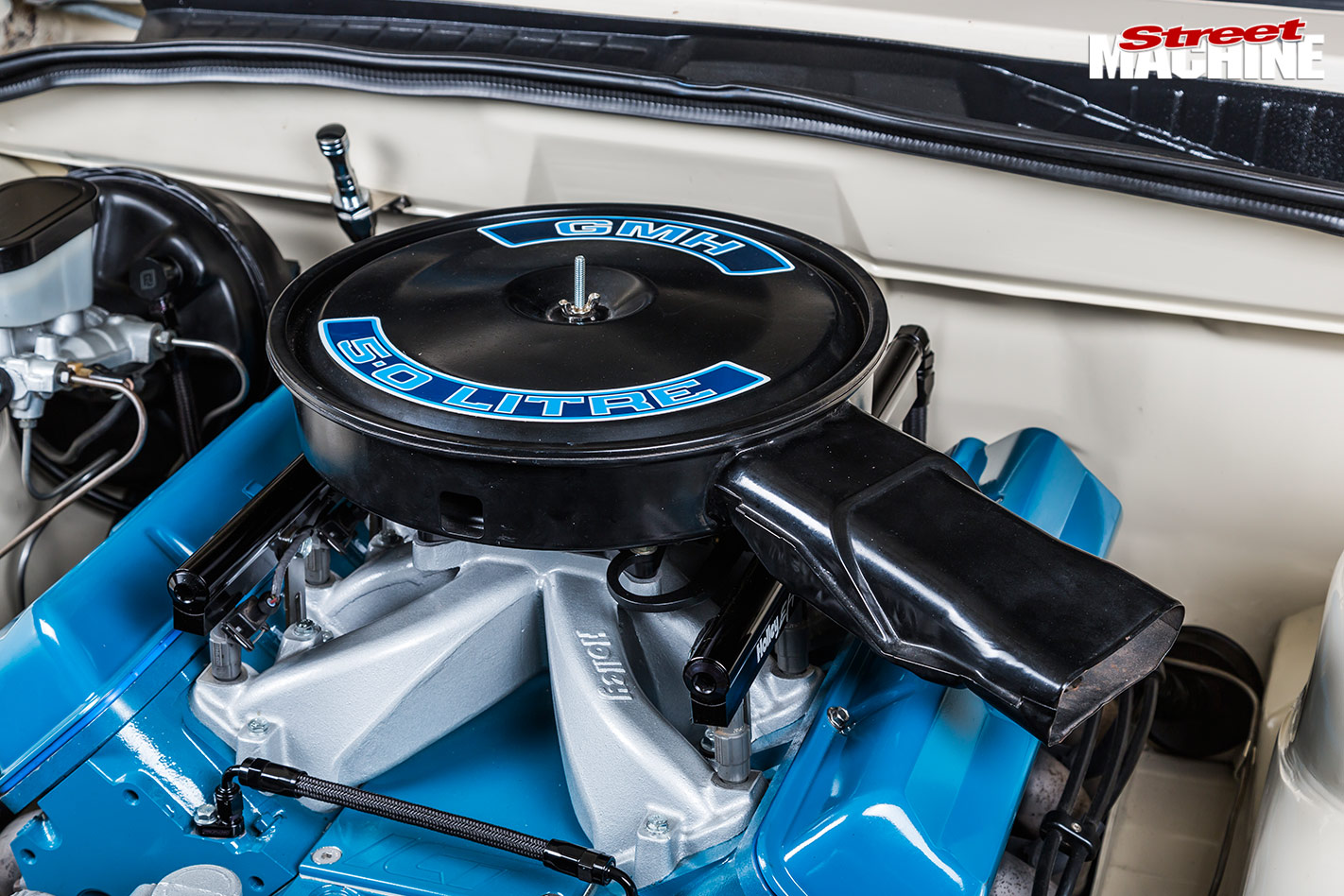 “The top end isn’t that expensive to buy, but once you start fiddling around with different throttlebodies, moving wiring, as well as finding a new home for the coil packs, which then requires custom-made leads, it starts to add up.”

With the coil packs nicely tucked up under the dash, Ben sourced some rocker covers from a 283ci small-block Chev. “I think they were found in 1962-66 Chevrolet Impalas,” he says. “They only ran them for a few years without an oil filler and no PCV holes, so they’re basically just a solid rocker cover. I bought an adapter from the States that allows the rocker covers to bolt to the cylinder head.” 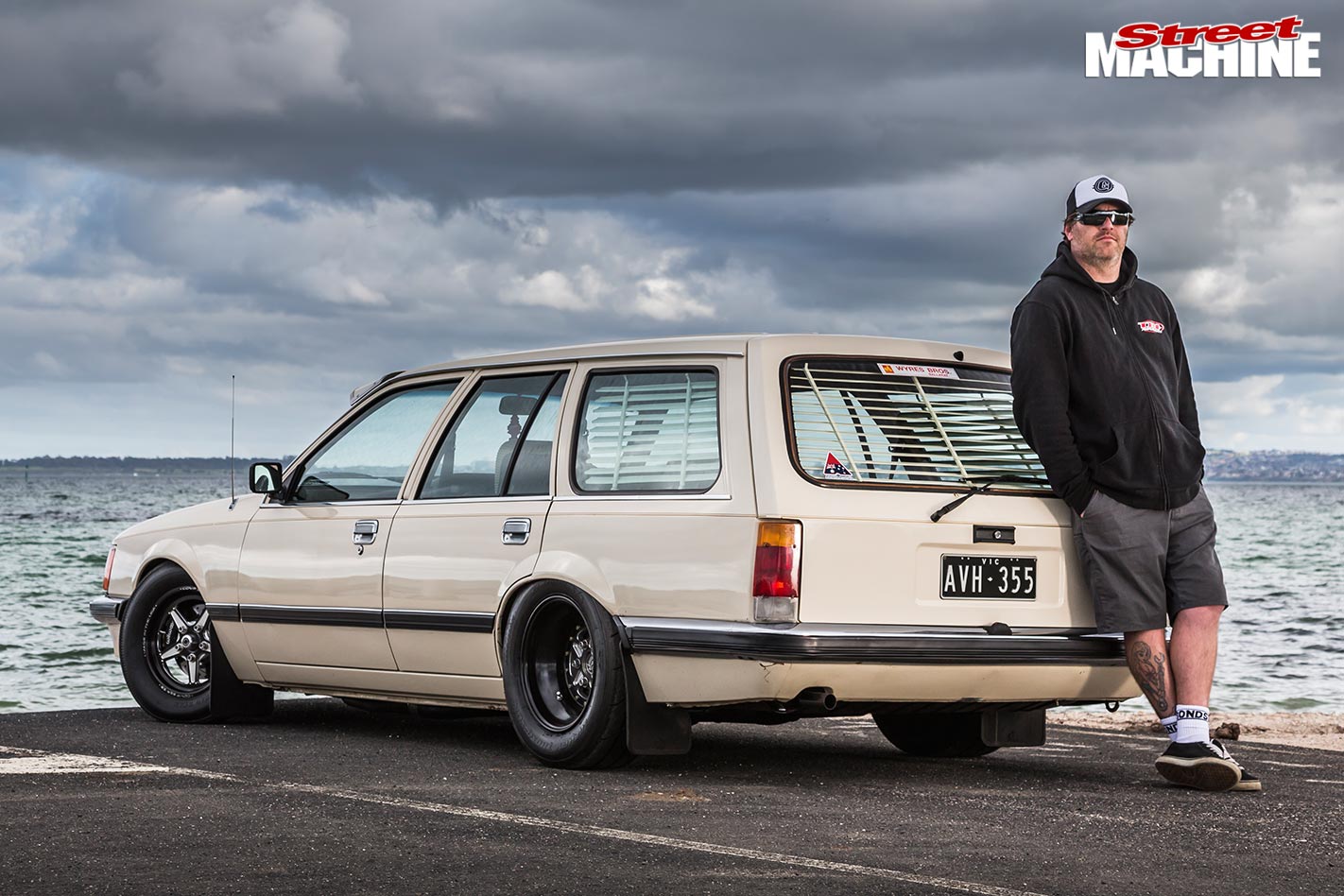