Attacking the Mountain in an LS1-powered VK Commodore

GM's mighty LS1 arrived on our shores in the late 199s (in the 1999 WH Statesman and Caprice range) but in the time since, it's become a legend engine for transplants into everything from the usual street machine and rod builds - to things such as Mazda MX-5s and Porsches. The light weight, versatility (with lots of different factory sumps and stuff) and best of all, awesome potential for output makes it a two-thumbs up transplant. LS everything! 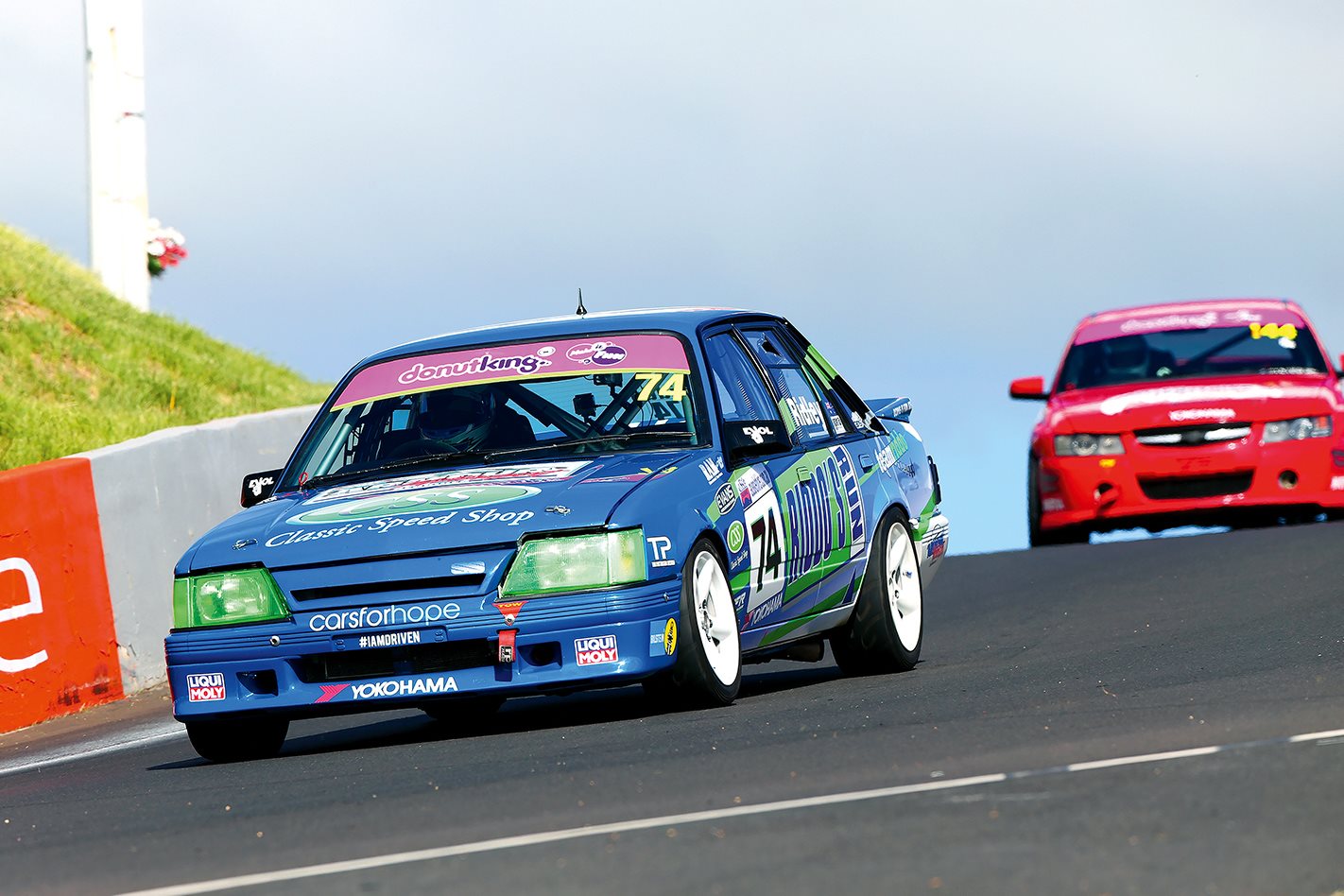 Plenty of 'experts' - here and overseas - moaned about the thin-wall alloy block, sintered rods and lightweight pistons whent he LS was introduced nearly 20 years ago, but as time has revealed, it's a good thing.

And the faster you want to go and the better you want your car to stomp, stop and steer, the more the engine's light weight, rev-ability, output and toughness come into play compared to other, older GM and Holden stuff. 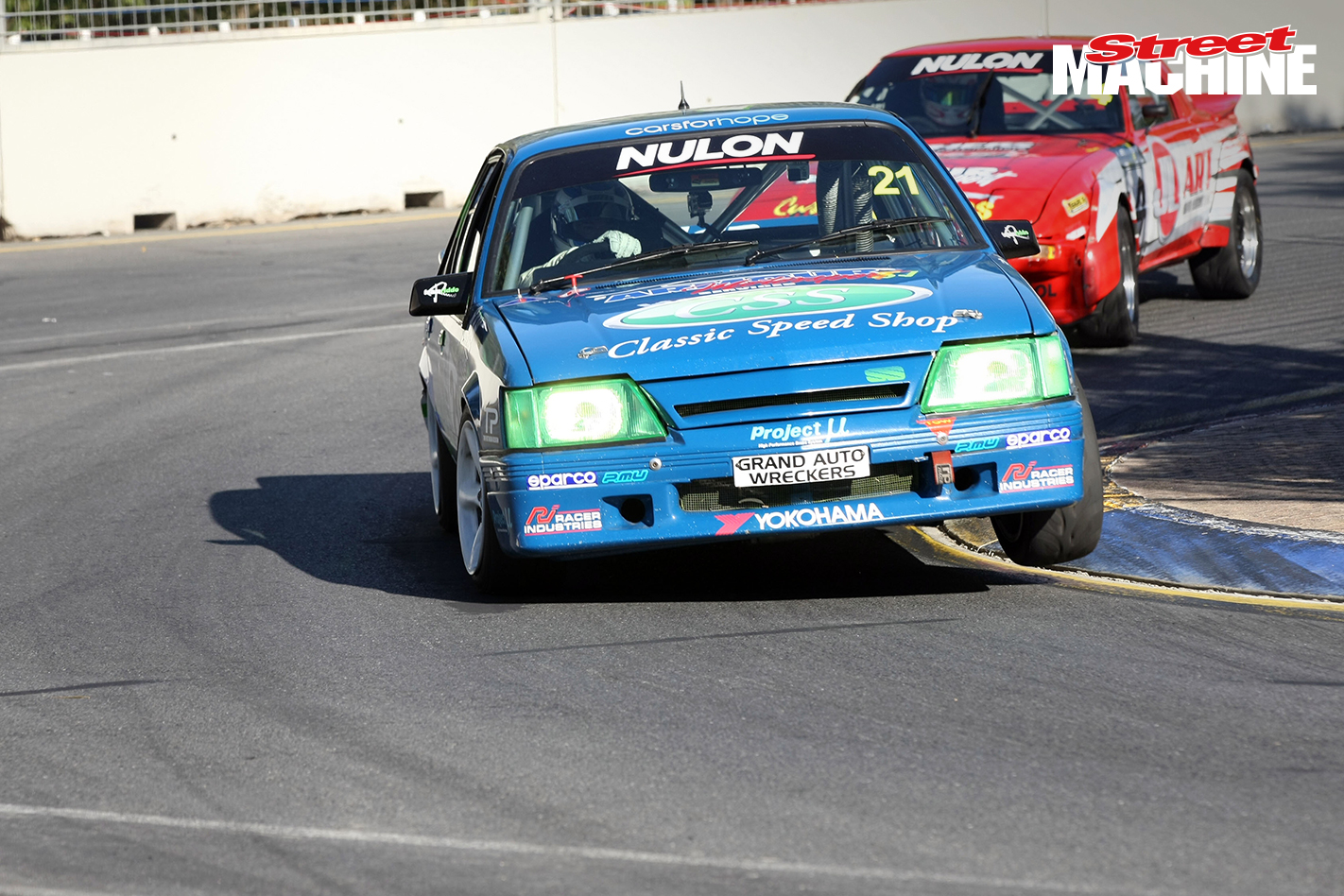 How long have you been into track stuff?

Cars, about 10 years. Before that it was karts and bikes. With the bikes, I more enjoyed the weekend riding with mates. We used to go for weekends up to Mudgee but then my mate Roy and I decided to try racing karts for a couple of years. That was all well and good, and then the progression took us cars. 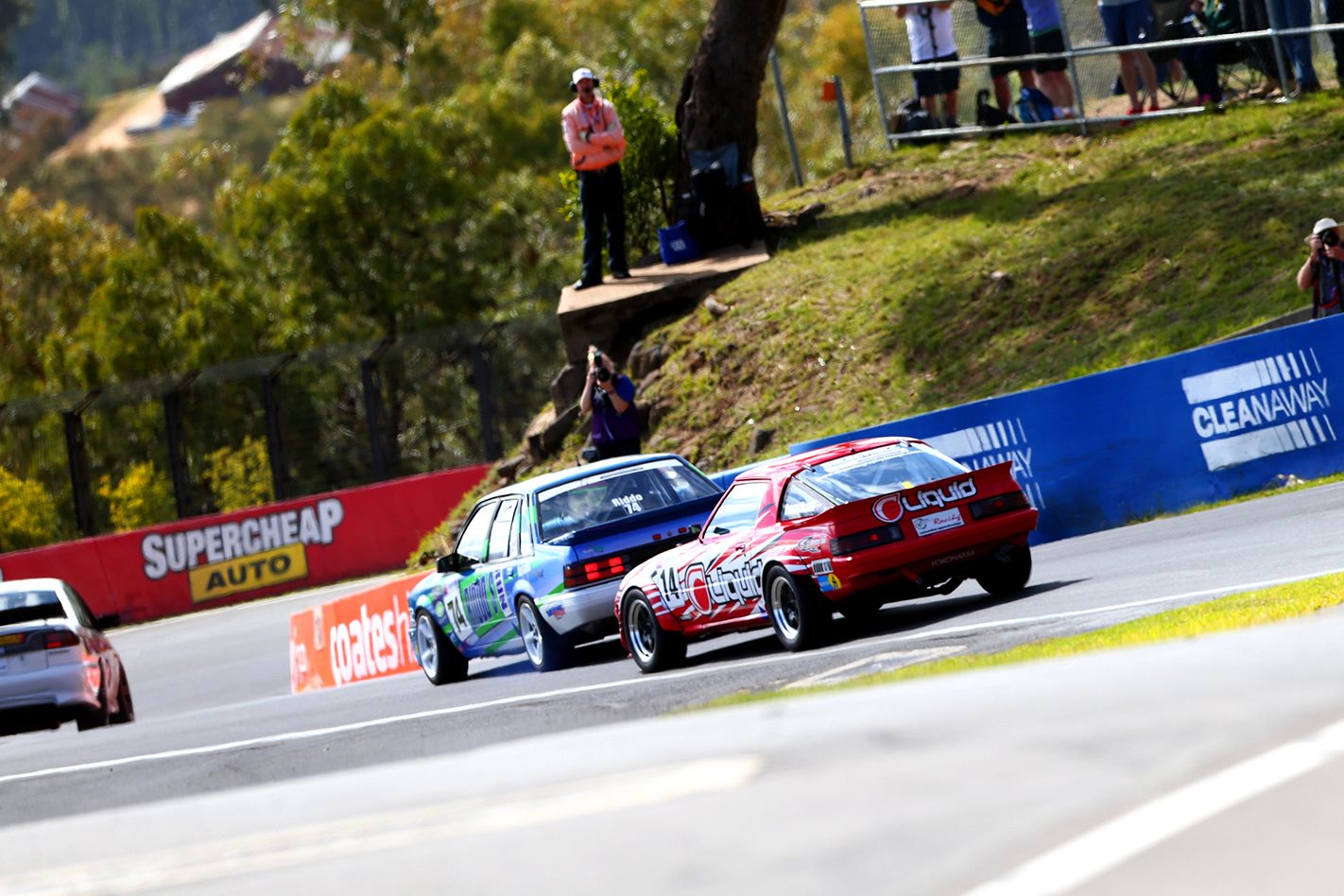 So you built yourself a race car?

Not straight away. First I did a few track days in the family car, a Subaru Liberty GT. But it wasn't an Aussie heritage car, you know what I mean? 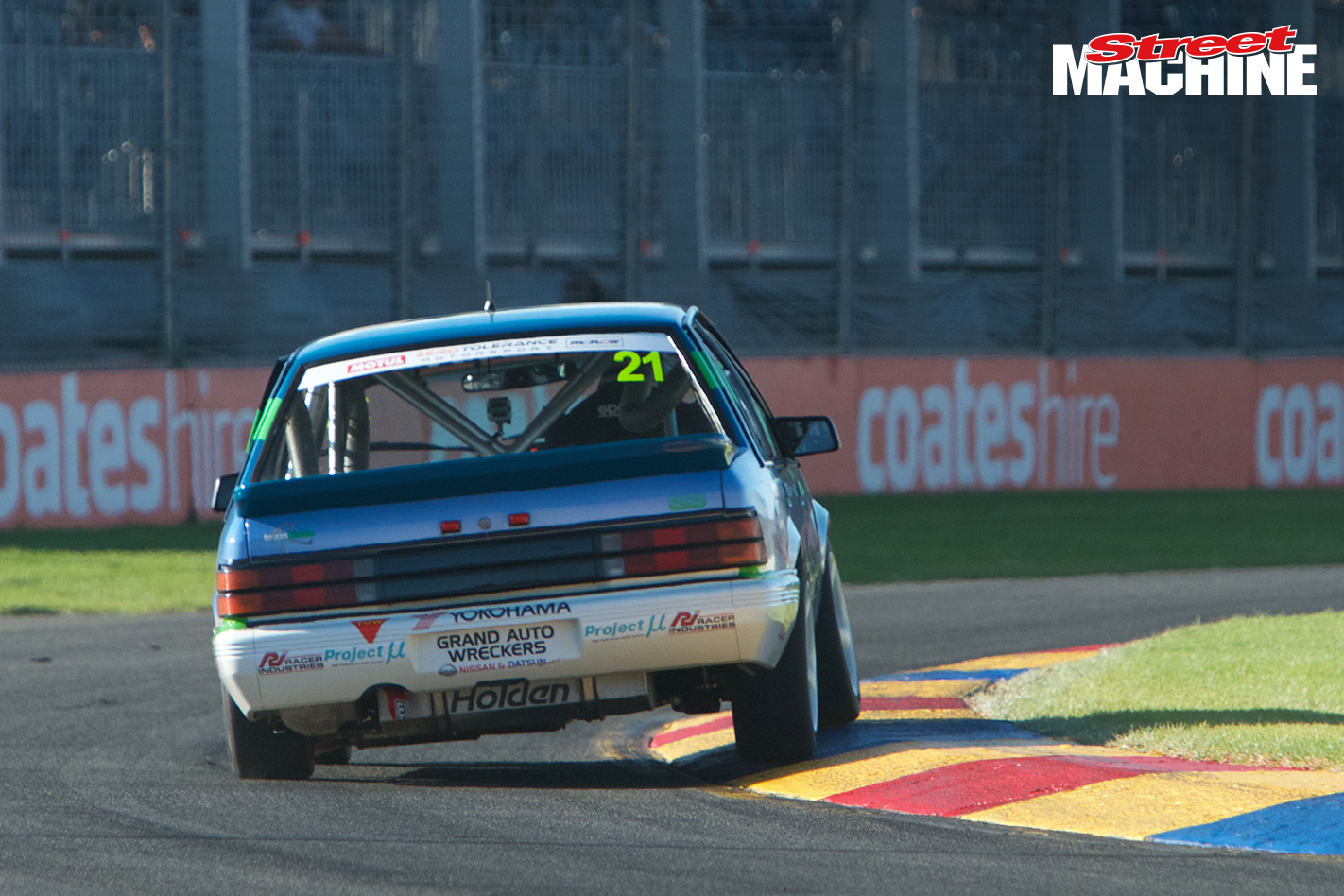 When I was a kid, I used to go to Amaroo Park [a circuit in Sydney's outer northern suburbs that closed in 1997] with my uncle Trev and I remember seeing the VH and VK Commodores getting around. In those days I was 10 or 11 years old. Oran Park, too [another now-closed track]. Oh yeah, and my mum used to do a bit of circuit and hill climb stuff in an LC Torana at Amaroo in the 70s. So when the opportunity came up to do this thing I thought, 'you know what? Yeah!' So I spoke to my wife and she was really supportive of it. 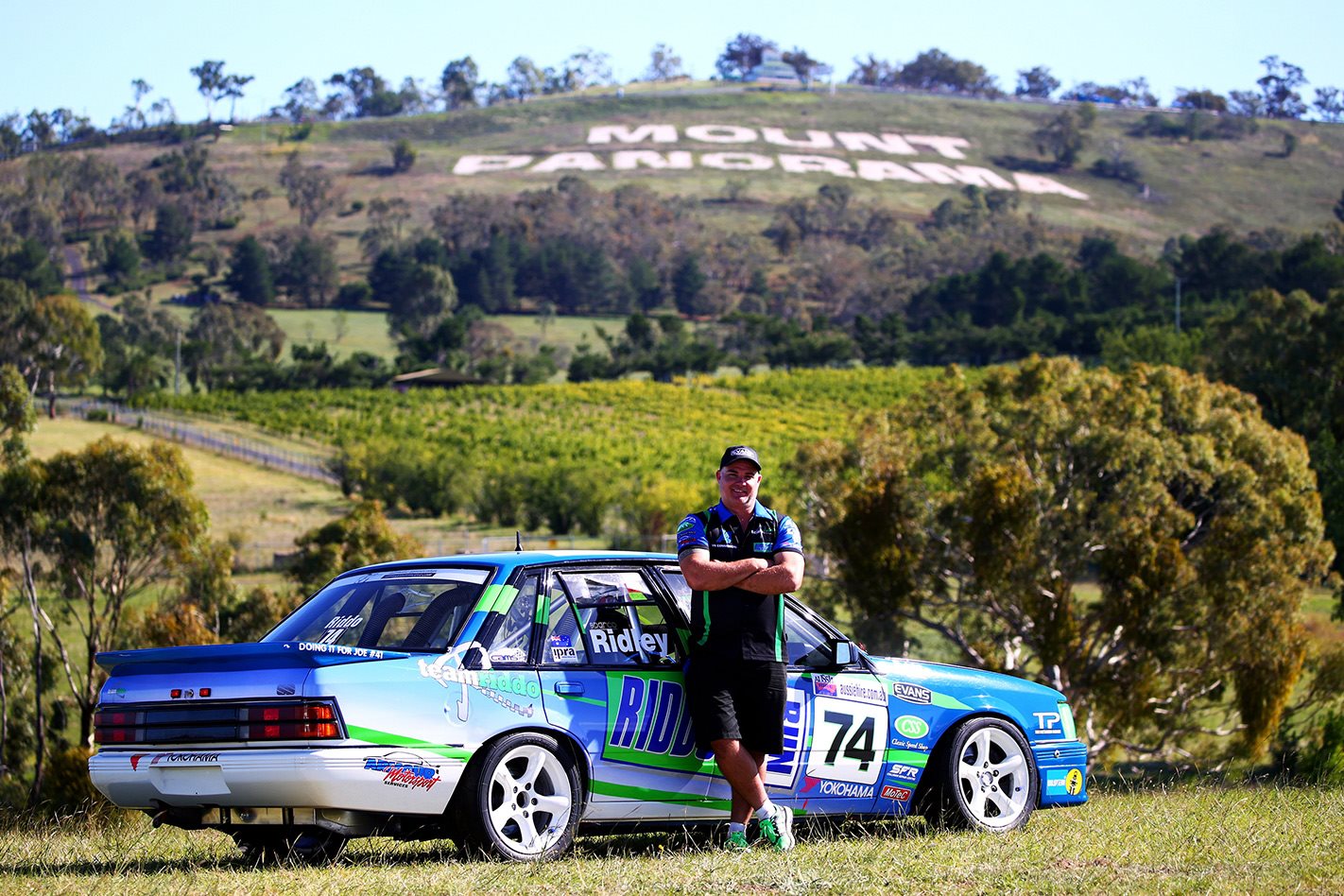 Where did you begin? A car or a shell?

I'd been mowing around a Commodore! It was a little old lady's back yard - it was her son's car and he'd parked it there and left it. It was starting to deteriorate. I kept looking at it and could see potential in it. So I chatted to the lady and she said: "Oh, I will have to speak to my son about it," but eventually we came to a deal and I bought it.

Good work! What shape was it in?

It had some rust and bits and pieces [wrong] when we got it home. Actually it was worse than I thought. When I started pulling it down it had rust in the rails and it was basically too far gone. 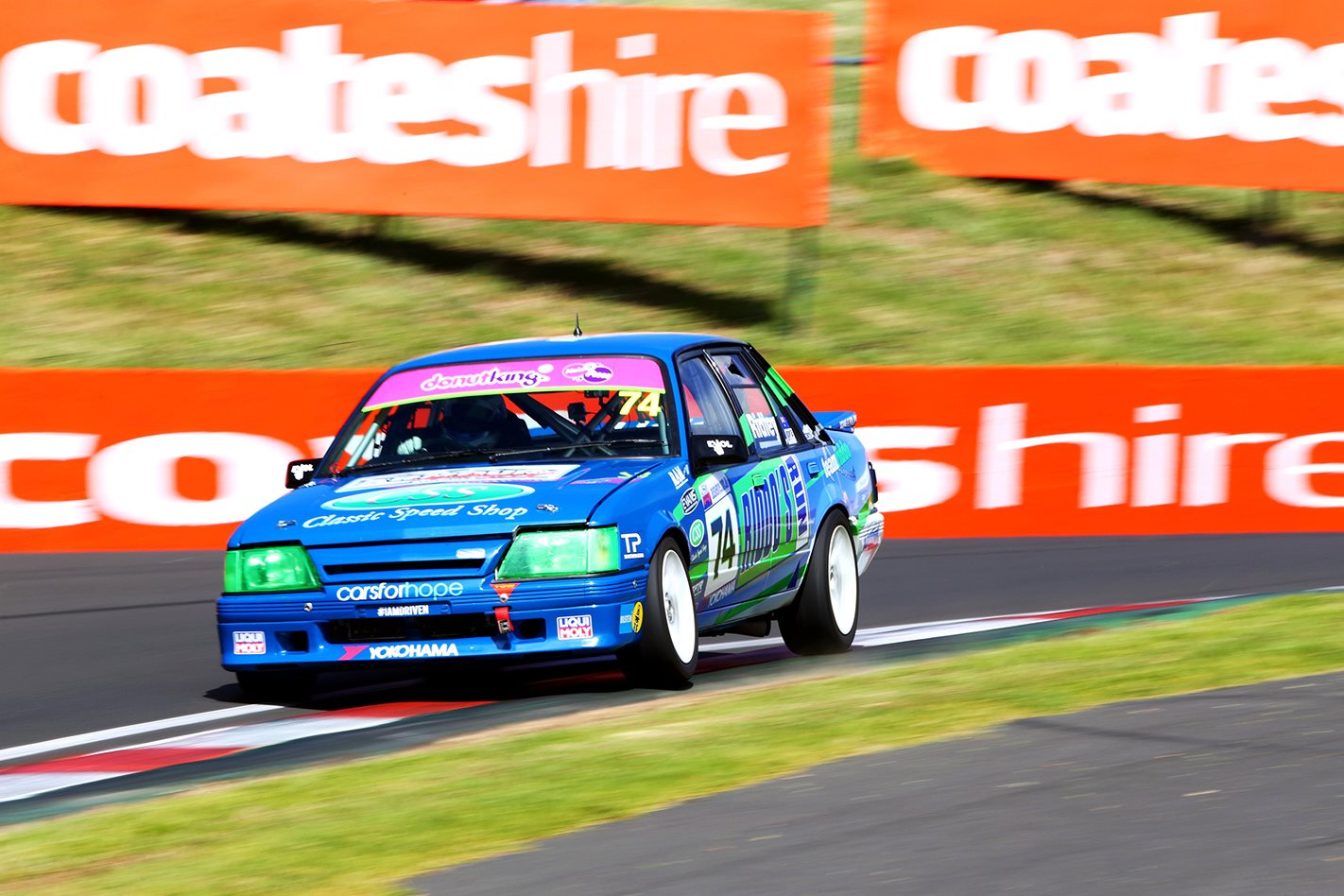 Oh! So that became a parts car?

Yes, pretty much. I found another shell - just a bare shell, no rolling gear, no interior, no nothing - at a wrecker's yard on teh Central Coast. It was really straight. So we fork-lifted it onto a trailer and brought it home and started working.

Actually, no! I've got one now with a hoist and stuff but at the time, Brett who helped me with teh paint and panel work [at Sydney Flee Repairs] gave me some workshop space to work in. I did most of the body stuff then walked away while they painted it, then I picked it up and took it to my mum's place - I started building it there. 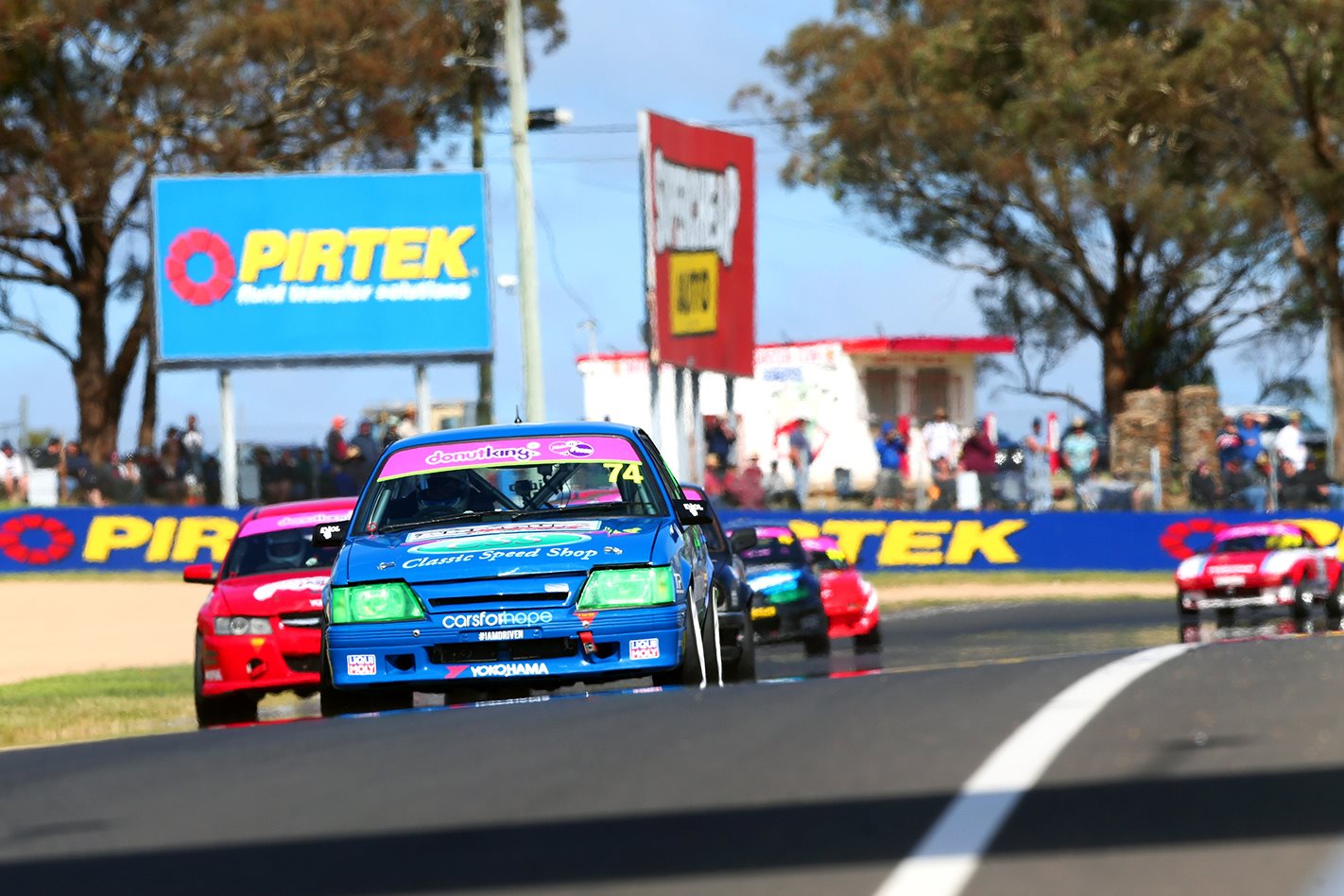 Did you start with a 'cage?

Yes, actually the 'cage went in before the paint went on. It's a full weld-in unit by Wildridge Fabrication.

What ideas did you have for the grunt?

The car I bought was a BT1 [Holden's national police package option] and it had the 304 in it and it had some reasonable gear in it. I was toying with the idea of building that but I was finding out plenty about people doing LS1 conversions, so I started pricing everything up and thought: 'You know what? This LS1 swap makes more sense.' Yes I know there are people out there who can make Holden engines solid and with good power, but the LS1, they're 300kW pretty much straight out of the box. At first, I wasn't chasing big power. I was concentrating on getting the car set-up, handling and stopping - all the things that these cars don't really do all that well. It wasn't an off-its-chops build. 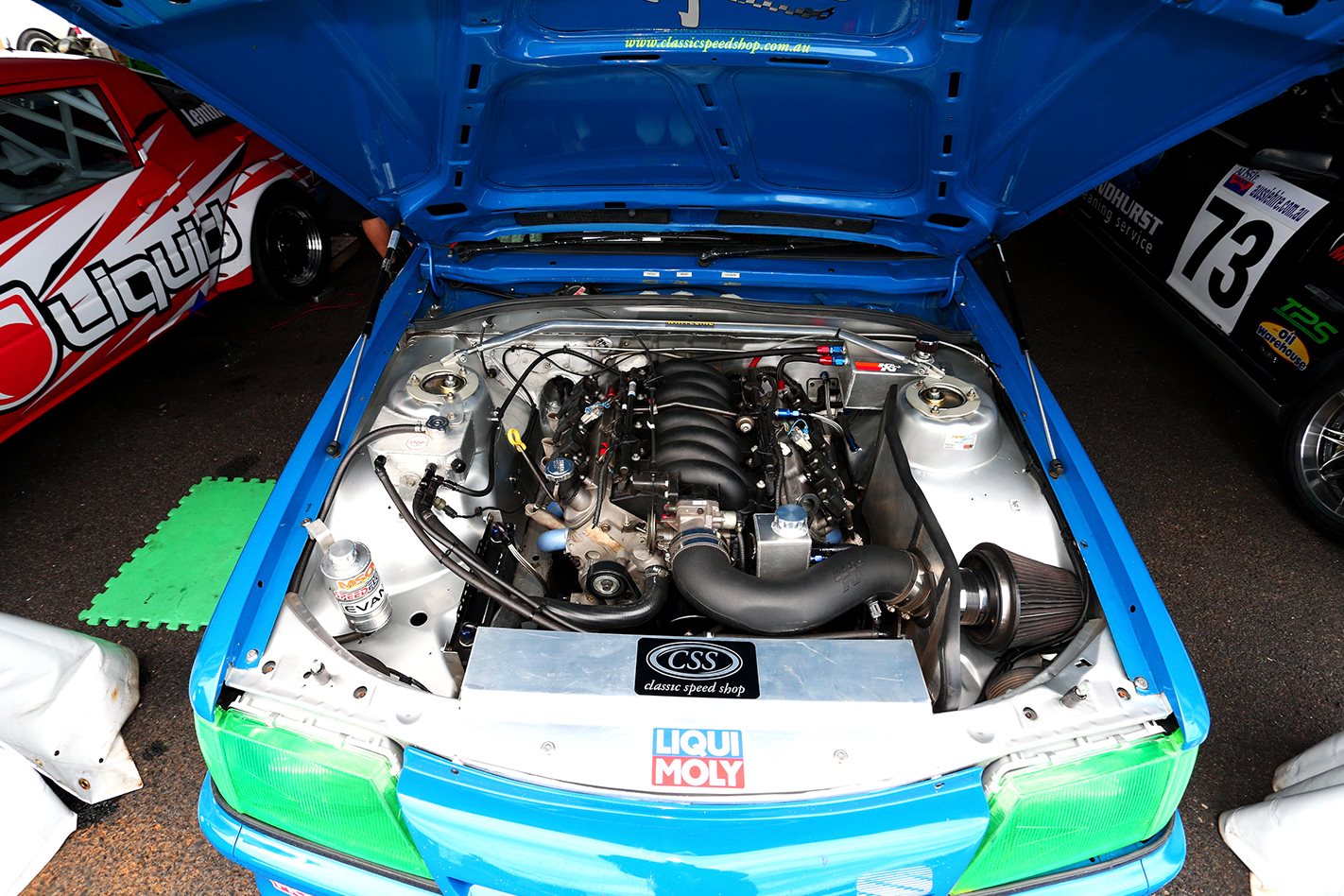 How did the transplant go?

The first thing we did was install a dummy engine. Jim, who built the engine [at Poll Performance], gave me a block and a few other bits and pieces so we used that to measure everything up. As it turned out, we needed to modify the sump. In the Improved Production class, we can't modify the K-frame [front cross-member] so it's the sump that is modified. From there, we had an idea that we'd use a T56 gearbox so that had to be dummy-fitted too, with the conversion kit for the starter to put that on the passenger side. We had to cut a bit from the shifter hole and look at a few tother things, fit up the nine-inch, measure up the tailshaft. Then we started plumbing!

I started with the standard tank but then later on I got a fuel cell. I plumbed the fuel lines to cater for I85. All the brake stuff was done to suit the Skyline calipers I wanted to use. Those required dog-bones [adapter brackets] to be machined. Hubs, too - they are a kit from a bloke in Melbourne, MS fabrication. They use a larger diameter bearing to better cope with the cornering loads. 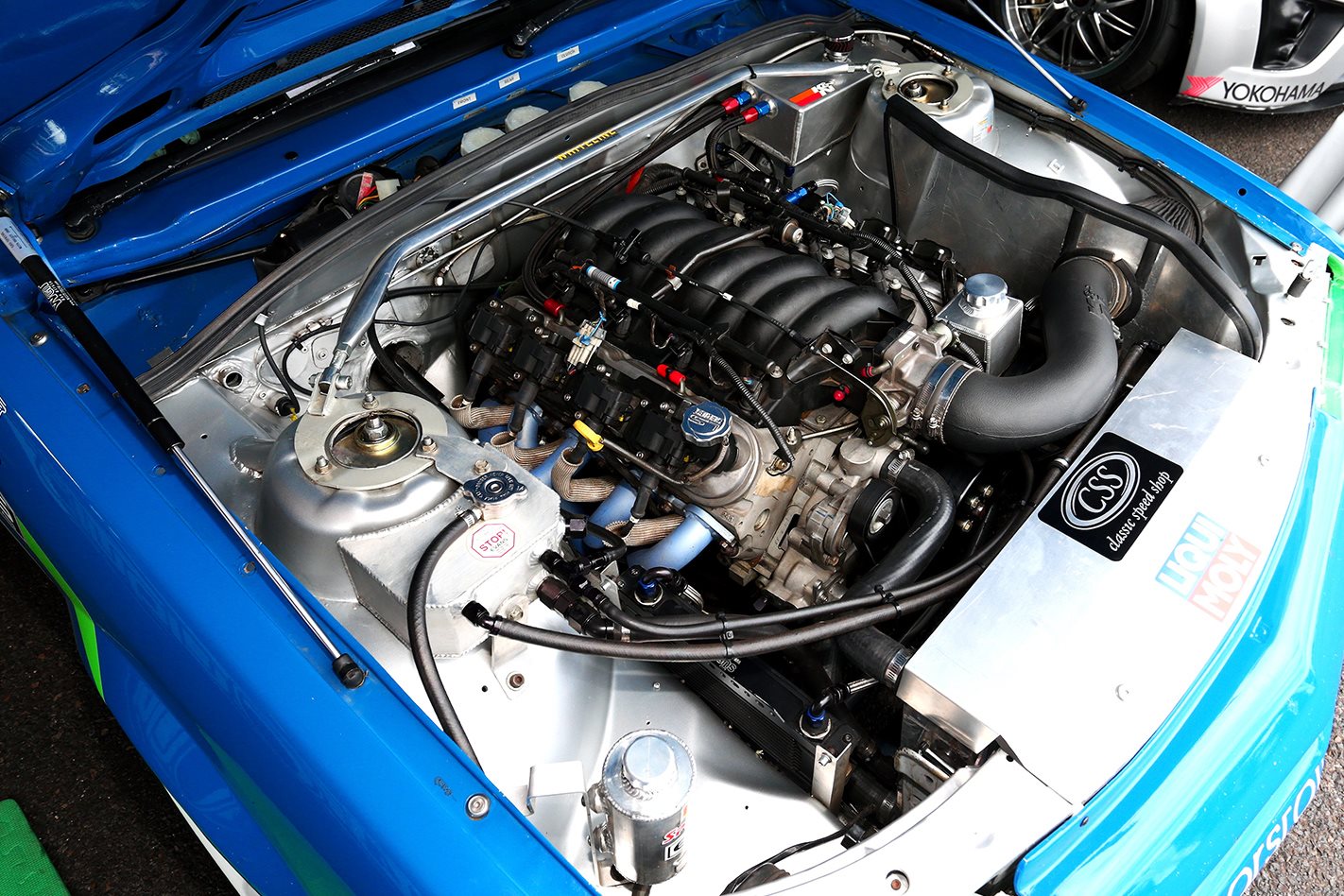 Yes, the outers are now pretty much the same size as the old inners and there's less flex. While we were in there, the struts were sent down to Heasman Suspension, the Bilstein blokes [in Sydney] and they did an adjustable platform and built some shocks for it. Once we had all the mechanicals in, we looked at the inside. I had the cage built to suit the seat I'd bought and the last thing I bought was the belts, because they're dated. Then it was the fit-out of the cabin and wiring.

Yes. The maximum size is 16x8 and that's an unusual size, actually. The only thing in Commodore pattern that I could find was the old ROH Reflex Commodore Cup wheel [from the 1990s race series]. They're starting to get thin on the ground but I managed to find some; I was working for a team in the Dunlop Series - tyres, refuelling and what-not - for a few years and I met a couple of blokes who used to run Commodore Cup and they had a few stashed away on pallents. I managed to get 16 rims. 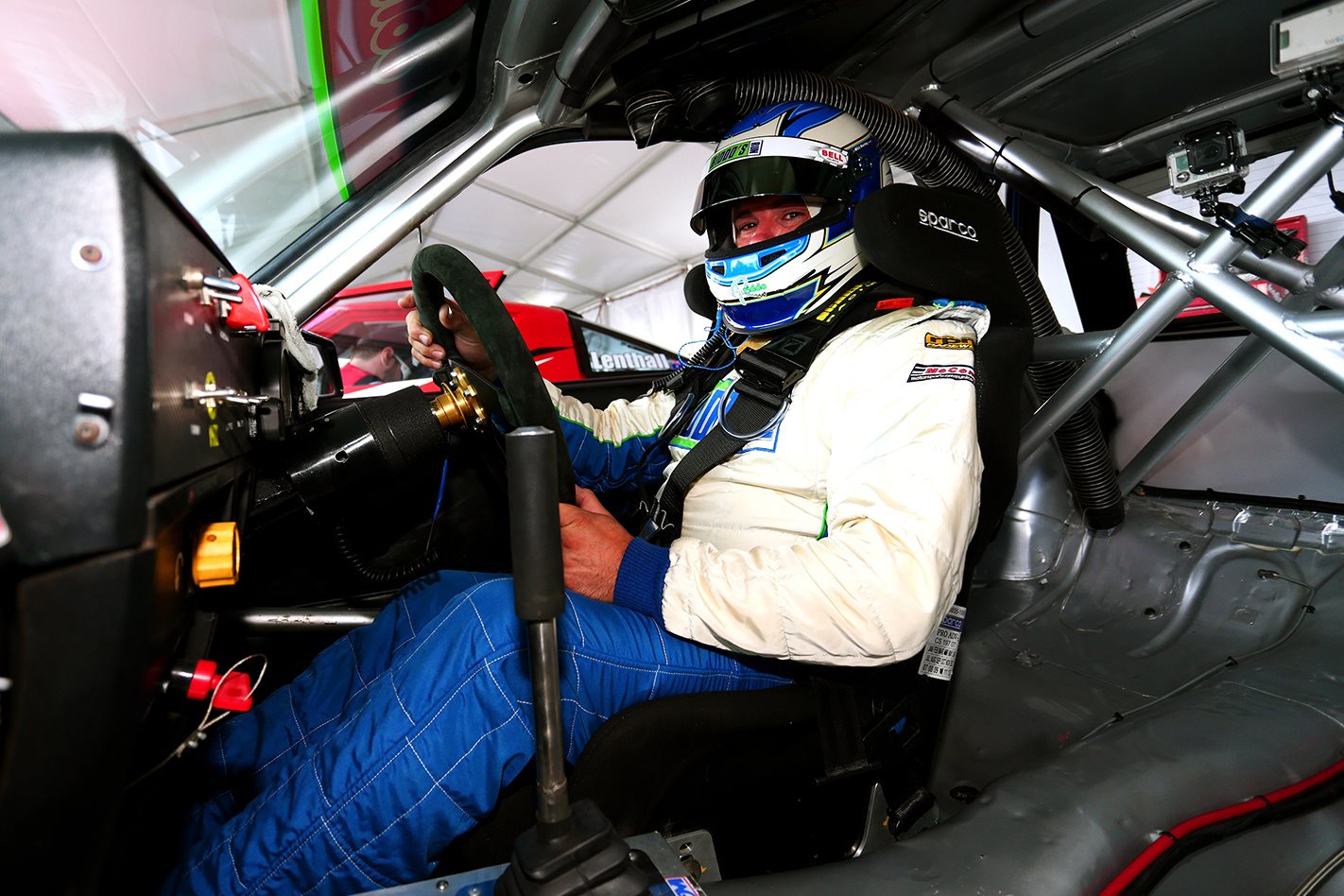 Tell us about the car's first outing.

It was at Eastern Creek and it didn't go very well at all, to be honest! All we did was blow poer steering lines! Yep, we had a horrible day! We packed it up and went home before we wrecked anyone else's track time! The second stint was better - that was on the south circuit [a shorter, tighter track] and things were much better. Yeah, there were a couple of issues - like any new car - but really the plan was to take it out there and ensure nothing fell off it! 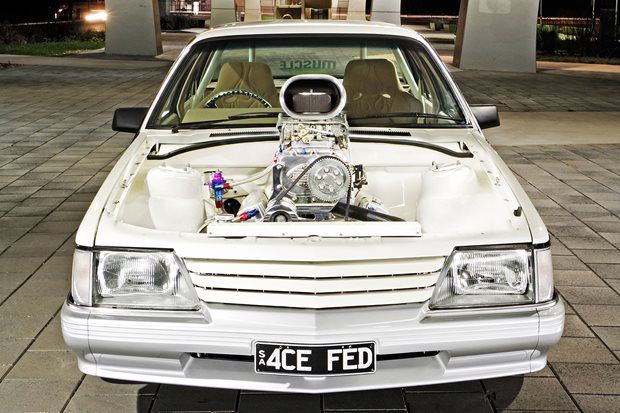 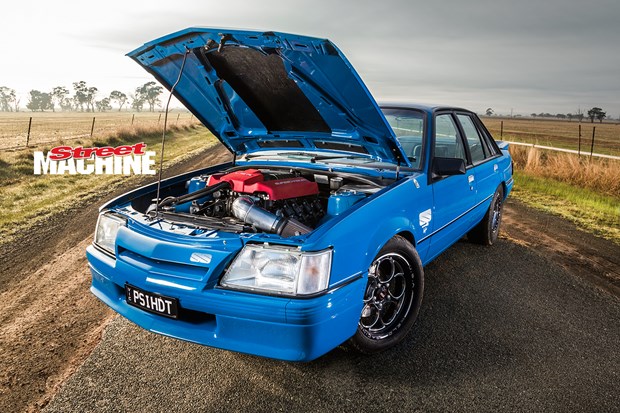 With 590hp at the treads via a blown LSA motor, Brock could never have imagined a VK Blue Meanie quite like this 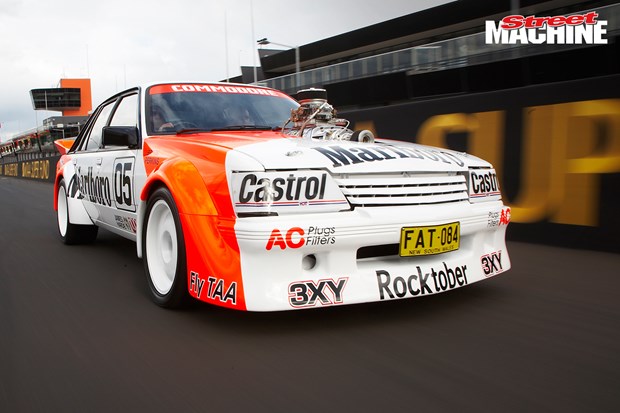