YOU might think you recognise Yvette Webb’s nanna-spec small-bodied Torana, because it’s a dead ringer for one we’ve featured previously, and there’s a good reason for that. 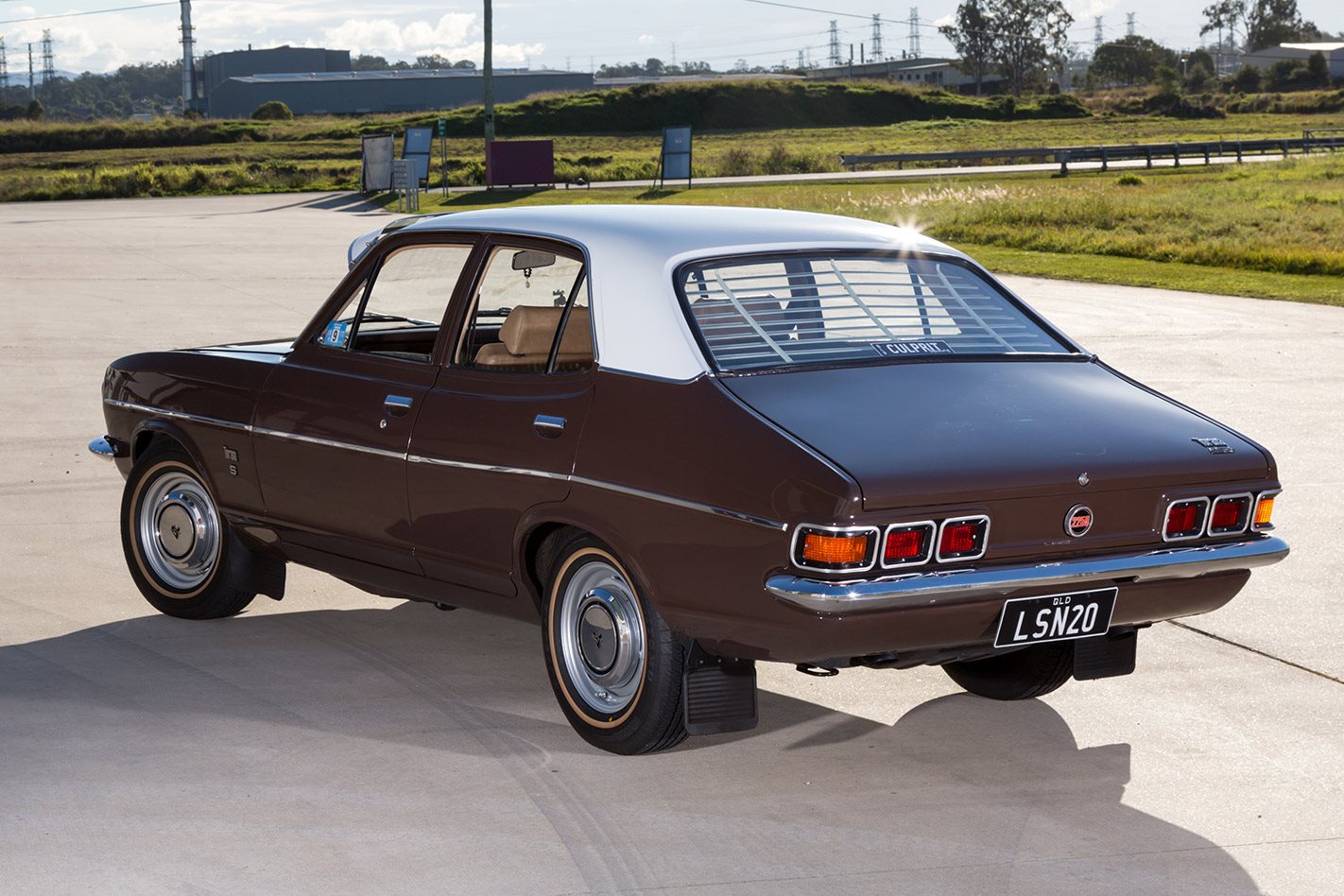 But although it looks similar, this is not the same car. It is, in fact, a non-identical twin.

“The LJ was a gift from Tony last year,” Yvette says. “He’s randomly surprised me with a few cars over the years.” 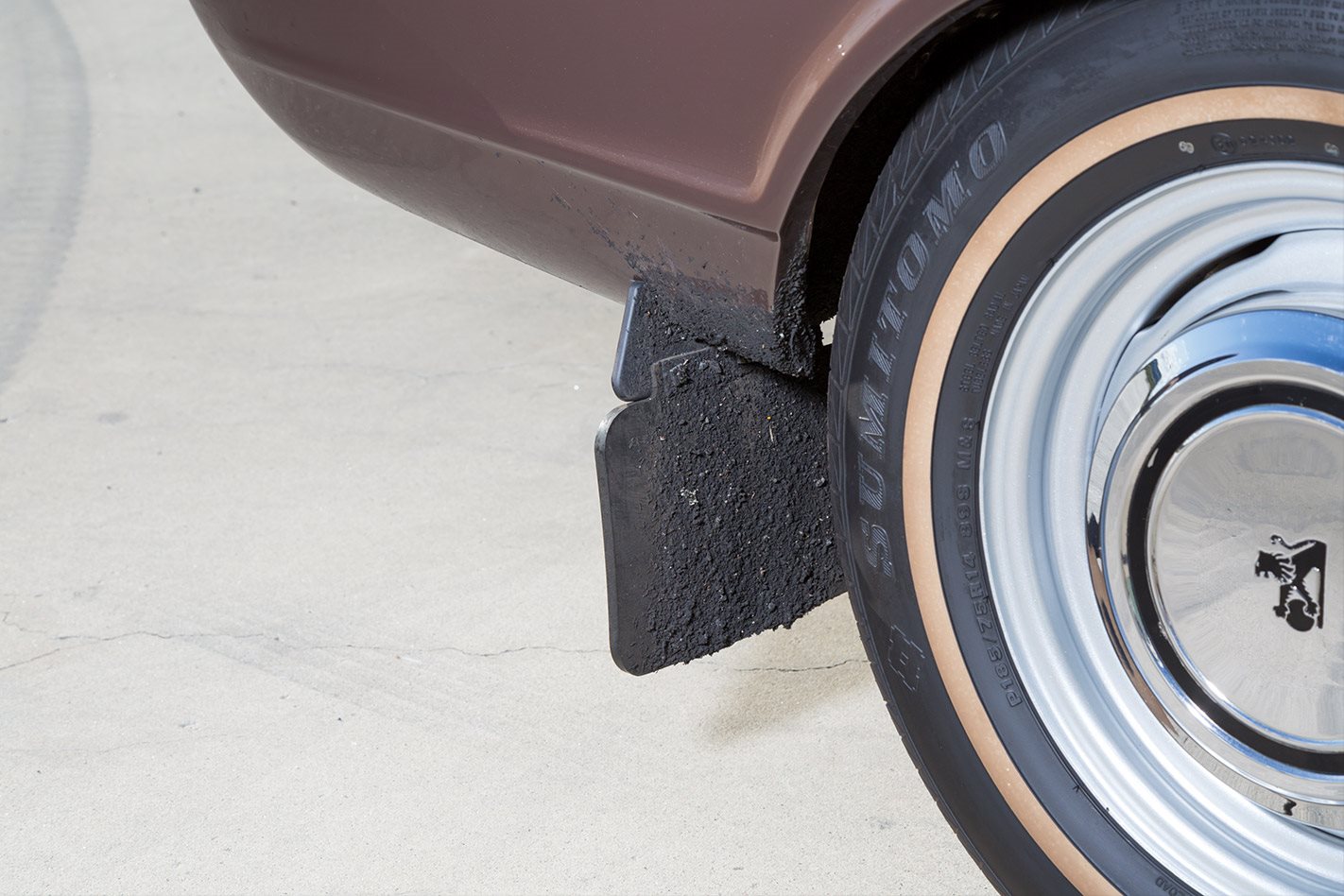 Tony bought the car from Nicki and Tim Cross (Tim is fifth on the APSA Outlaw Radial list with 6.8 seconds in his Cortina). Tim had built the LJ as a cruiser. “He thought we’d like to buy it as we already owned two other poo-brown Toranas,” Yvette laughs.

The Webbs have named their three brown Torries too – Tony’s CULPRIT is known as LeRoy Brown, this is Charlie Brown, and Tony has another drag car in the build dubbed James Brown. 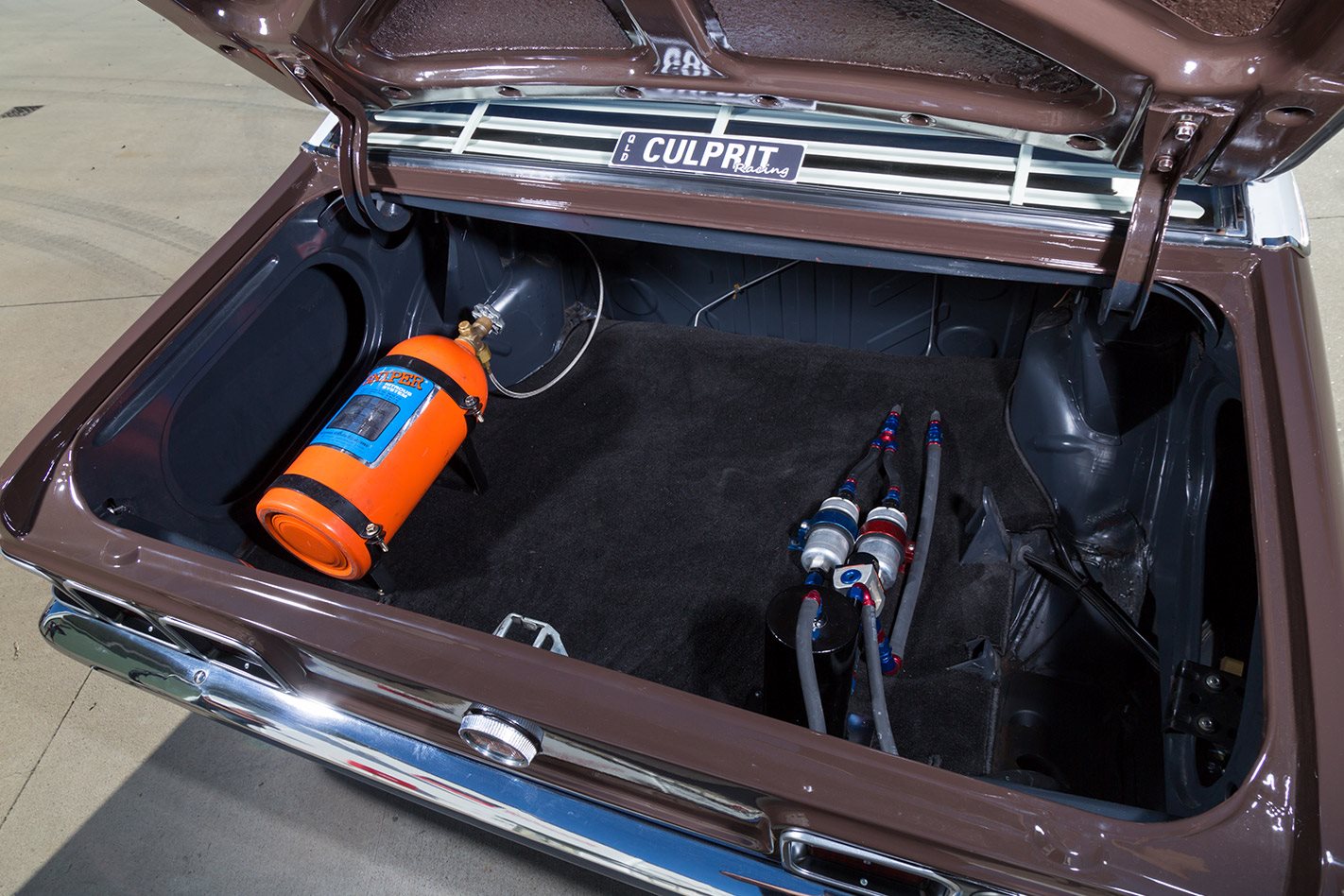 Tucked neatly in the boot is a Sniper nitrous bottle. Currently configured to deliver 150hp per spray, the single-stage wet system is controlled by sensor at full throttle. The boost in power provides a gross total of 600 neddies

“We just like the colour,” Yvette says. “People ask: ‘What’s with the poo-brown Torana?’ and Webby always says: ‘Ahem; it’s chocolate metallic.’ Also, Webby has always added a venetian blind in all of his Toranas. He likes that vintage, nanna look, and I think it’s pretty cool, too.” 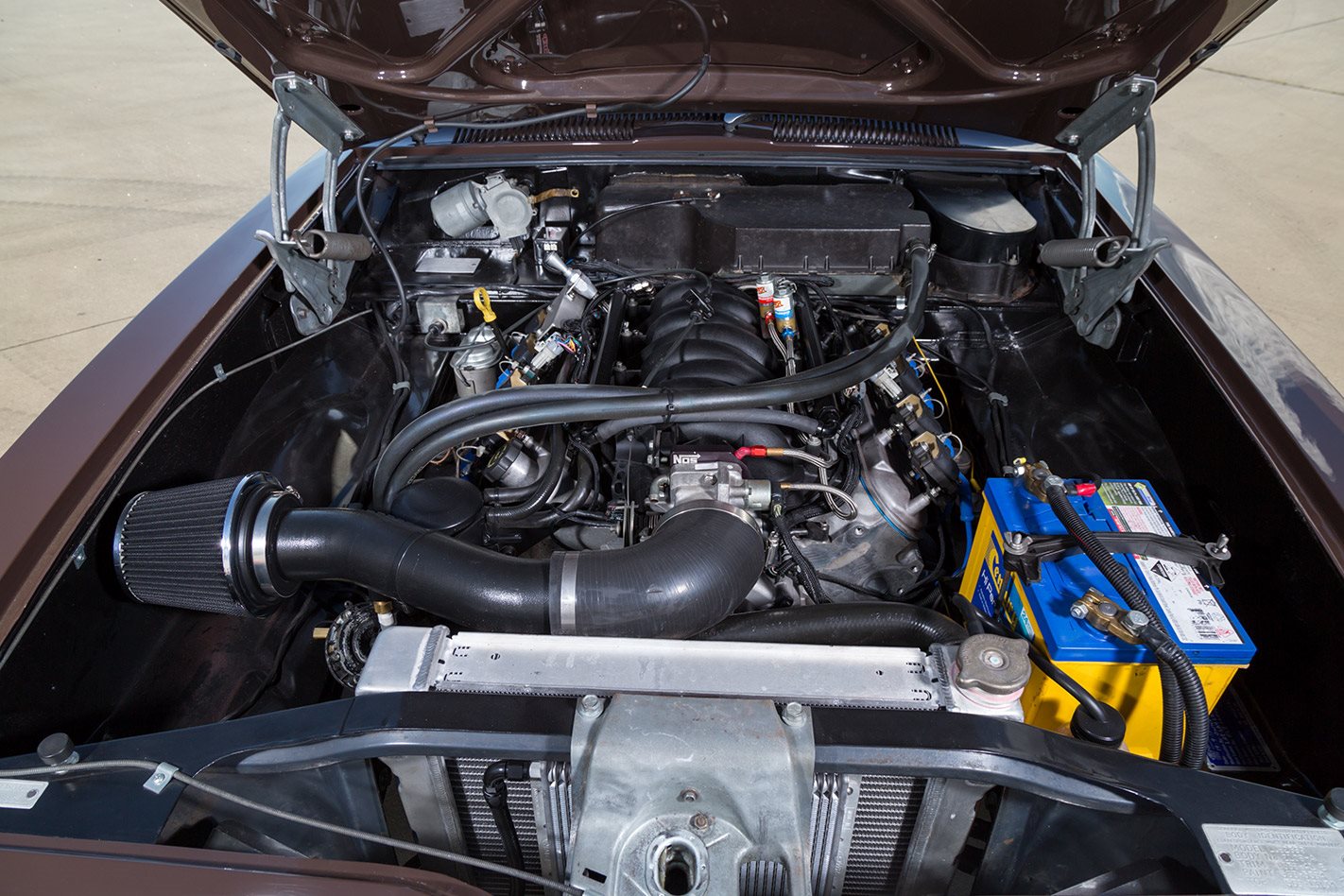 Bruce from Body Spray Restoration gave the body and bay a freshen-up before Tim shoehorned the LS between the chassis rails. Even though it's a small body, there's still enough room to swing spanners

Under Charlie Brown’s bonnet, however, it’s no place for nannas. A mild LS1 with a secret cam grind, new rod bolts, head studs, roller rockers and ported heads was installed by Tim, with an added shot of nitrous that’s good for 600hp all told. 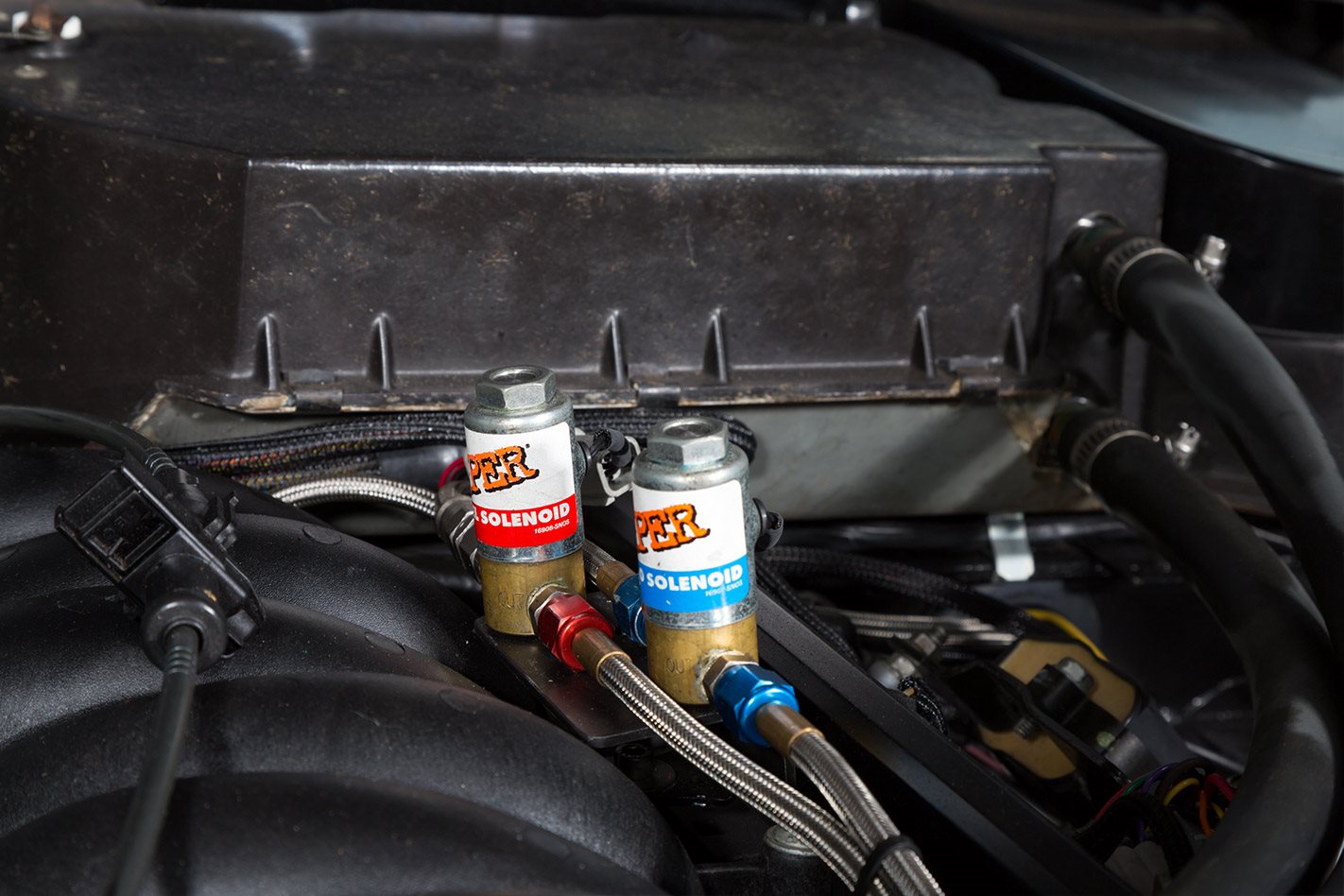 Further back is everything you’d want behind a stout V8, including a ’Glide with TCI 3500 stall, and a nine-inch LSD with 3.2:1 gears, soon to be upped to 3.7. The amped-up goodies carry on underneath, with Pedders coils all ’round and upgraded stoppers front and rear. 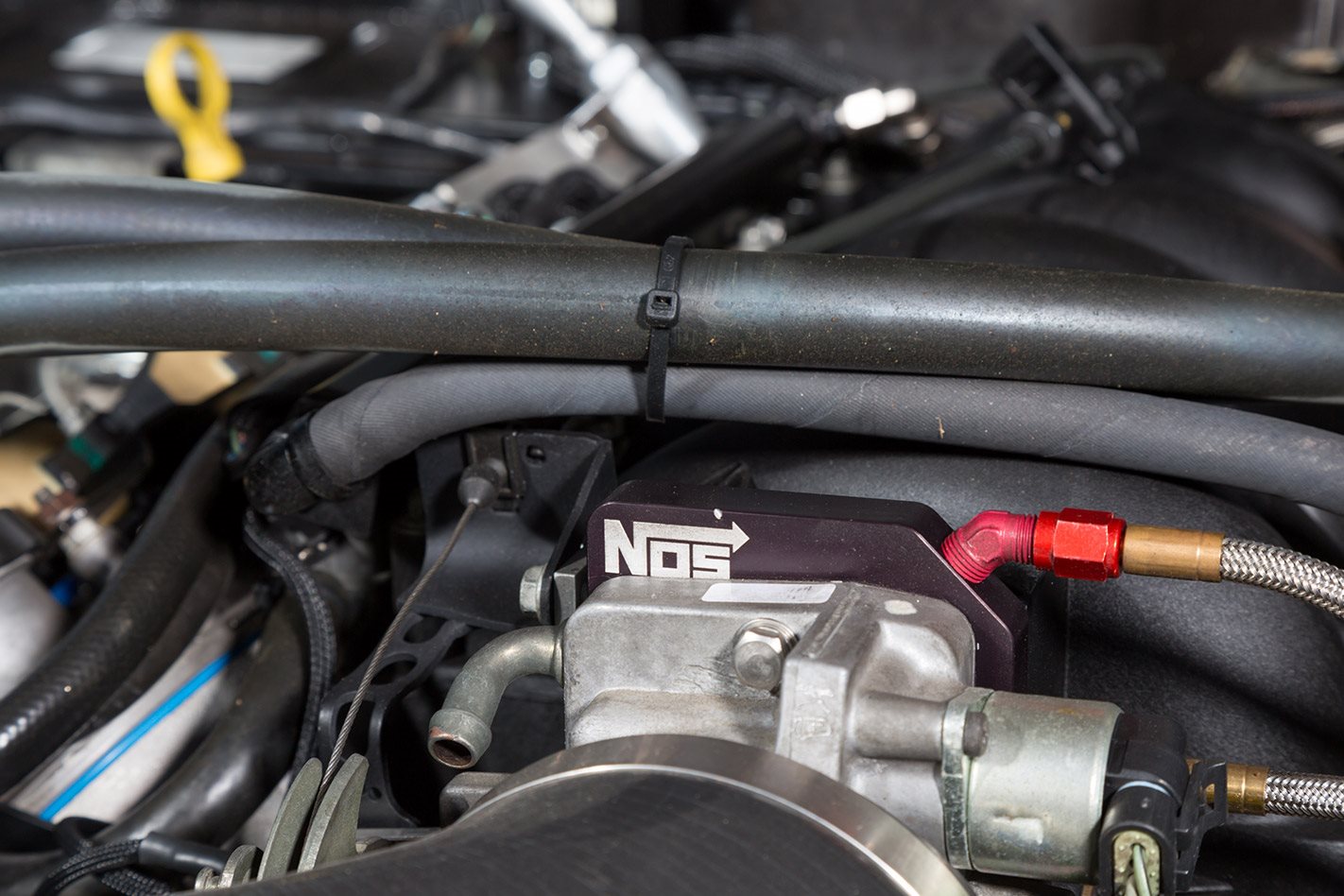 With most of the hard yakka already done, Yvette and Tony just needed to sort out the rear end to get the tyres to fit better. They also added an MSD two-step and shift light, a sure sign the car is headed for a quarter-mile hiding. 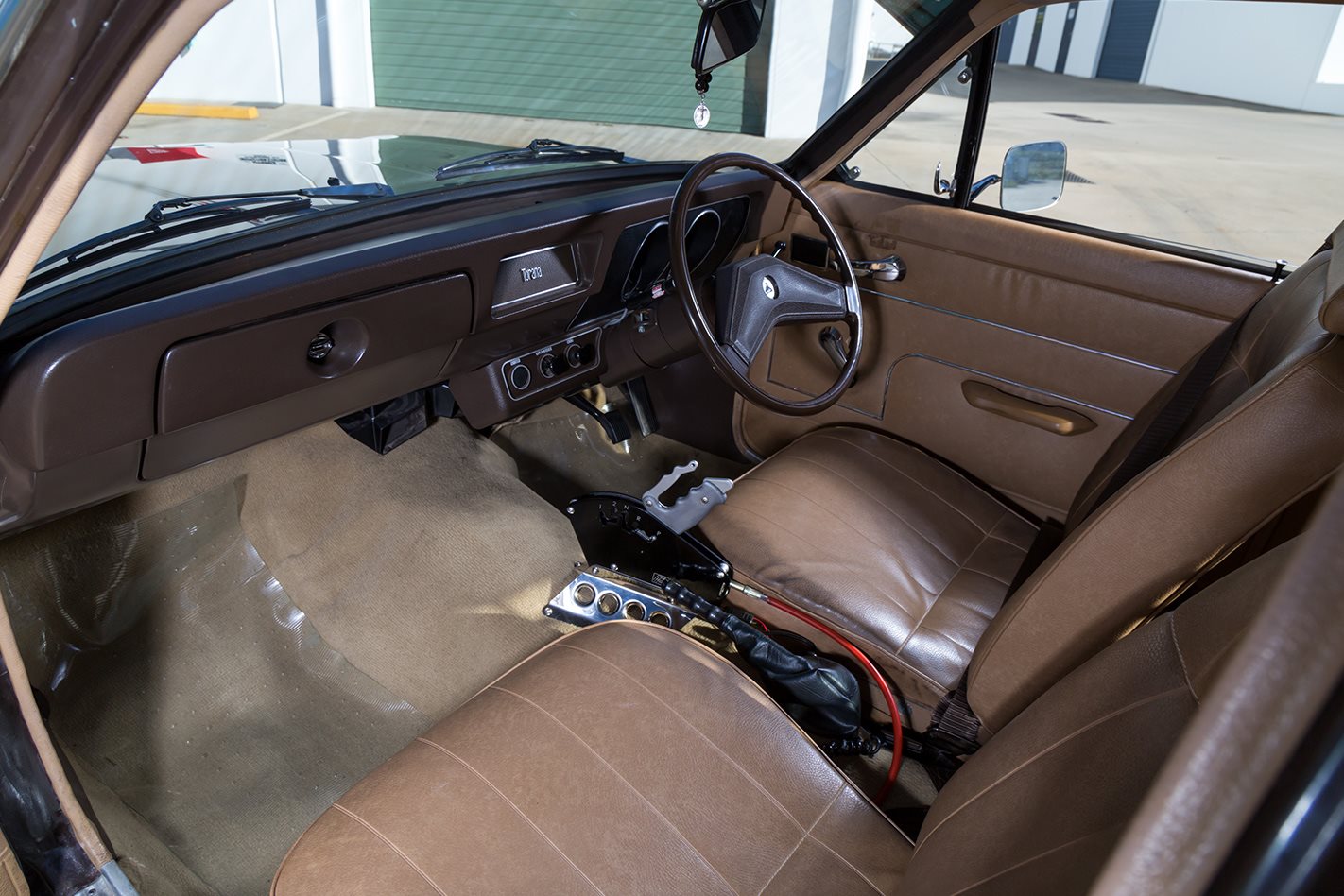 The MSD shift light is set to 6500rpm, but they plan to up it to 7500 once Yvette has a few runs under the belt

“We headed out to a quarter-mile track day and it was heaps of fun,” Yvette says. “I’d always bagged out Webby, saying: ‘How hard can this drag racing thing really be?’ And it’s really hard!”

After running a best of 12.3 seconds on the stock rims with tiny 185-wide rubber, Yvette feels ready to step it up. 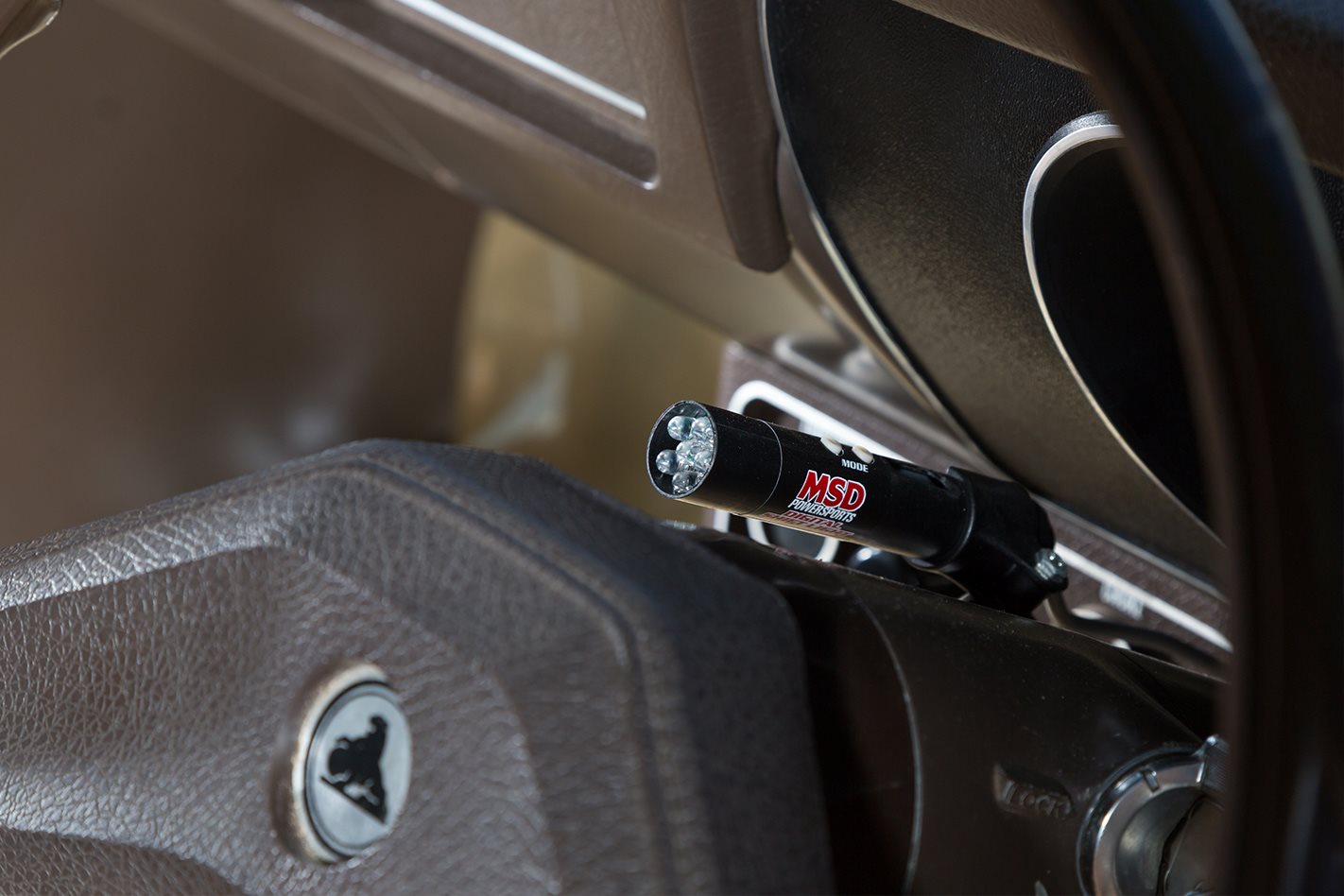 “I had this unconscious safety mechanism where I’d get towards the end of the track, the LJ would move a little bit, and I’d back off. I just couldn’t seem to accelerate right to the end. My brain was saying: ‘No, no, no, no!’ I am definitely going to race again and I know I can do better.” 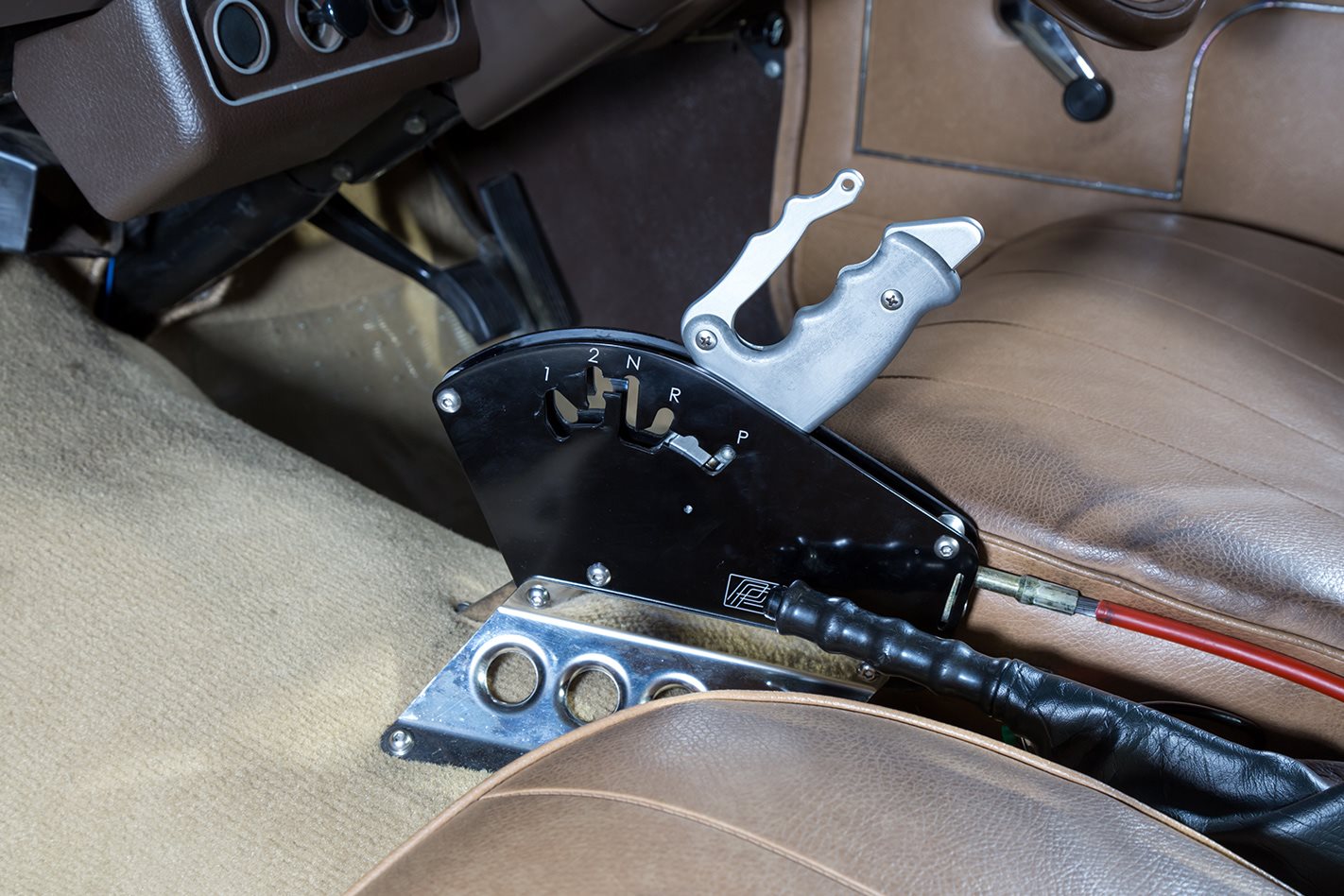 "It's the most difficult shifter I've ever dealt with as I'm not used to going through all of the gates, but it all adds to the experience," Yvette says of her Precision Performance Kwik Shift I

Yvette and Tony’s 10-year-old son Connor is also a massive fan of the car.

“Connor is a big a car nut,” Mum says proudly. “We go on cruises and for Sunday drives. His friends love it when I drop them back to their houses; they have massive smiles. They try talking to me over the sound of it, but I can’t hear them – that’s a bonus, too!” 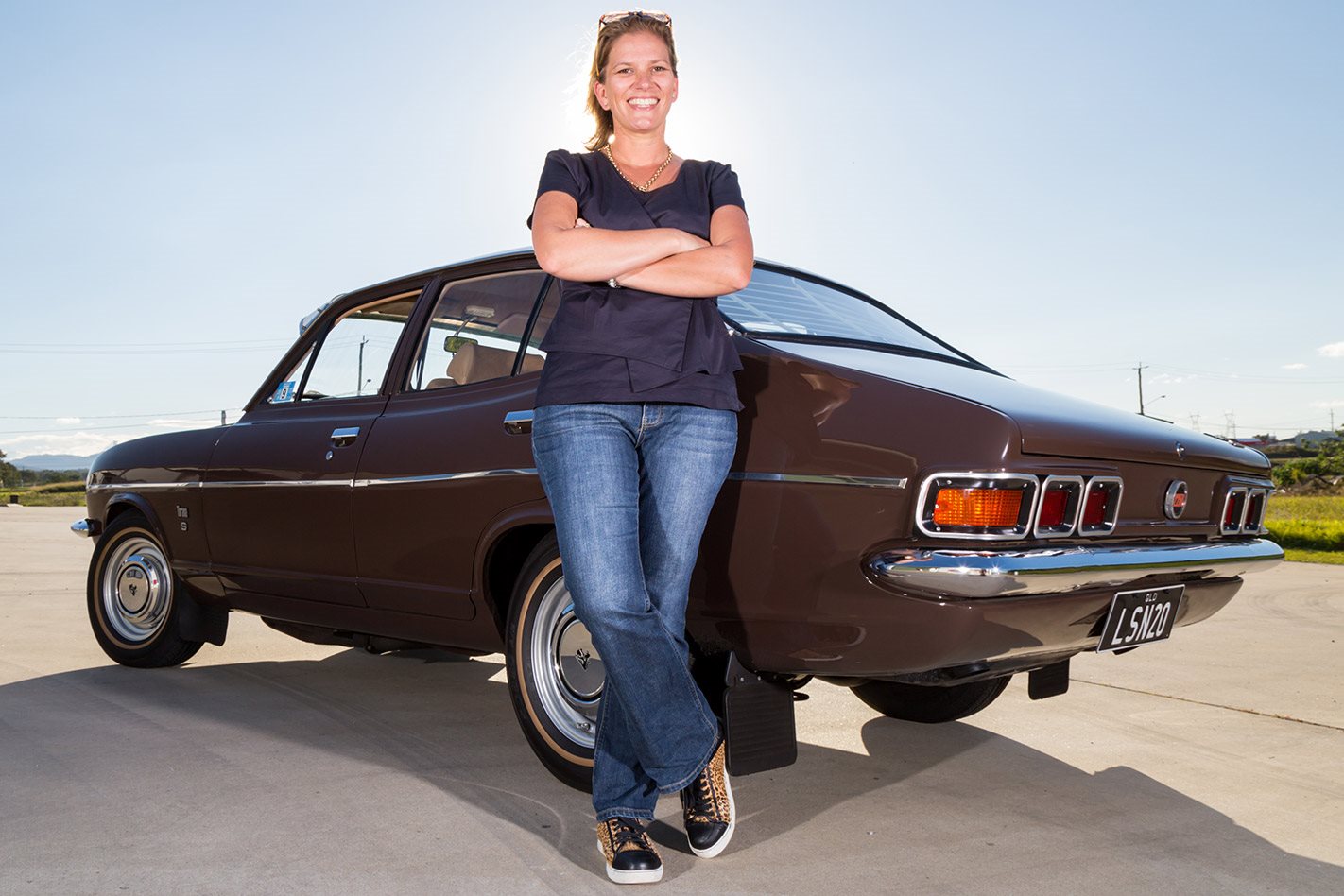 Yvette and Tony have been married for 15 years. “His love of cars is out of control, so I’ve kind of got swept up in it,” she says. “The car community is fantastic; there’s so many lovely people”

And yes, the nanna spec does lead people astray.

“I was in traffic when an older couple pulled up alongside and, over the rumble of the LS, this old lady yells out: ‘I used to have one of those!’ I was rocking from the V8’s vibration and turned to Tony saying: ‘I don’t think she had exactly the same,’” Yvette laughs. “I truly love this Torana, it’s a keeper. Nothing leaves this house, so we’re just going to keep collecting brown Toranas.” 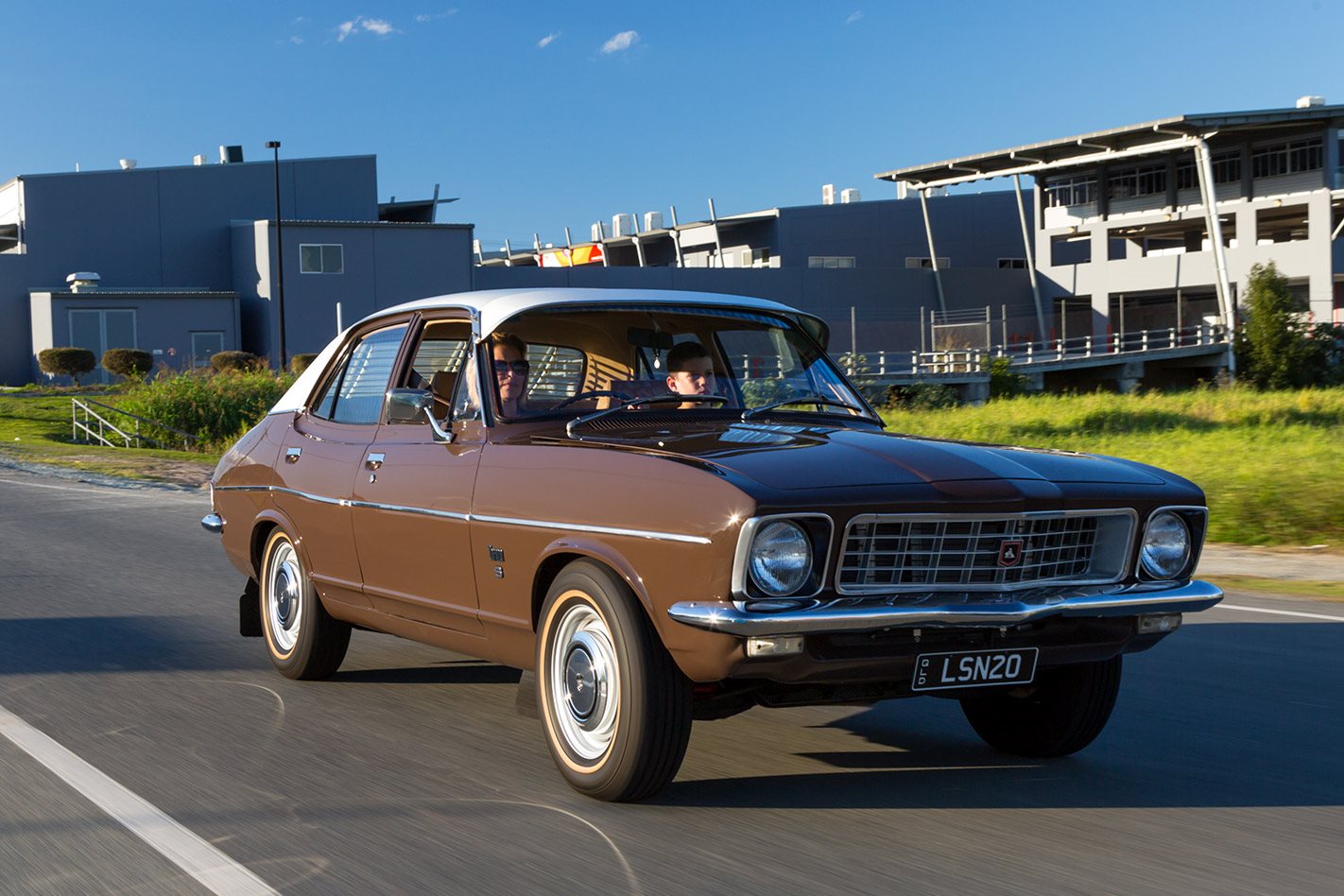