AT A cursory glance, you’d swear blind Scott’s Aero-kitted VS Commodore is powered by the very first fuel-injected incarnation of Holden’s own bent-eight – the twin throttlebody-equipped HSV VL SS Group A Walkinshaw five-litre, dating back to the late 80s. But looks can be deceiving.

Scotty is in fact running a slightly more contemporary powerplant – LS-based, of course – and the ease with which he and good mate Damien ‘Chubby’ Lowe from Lowe Fabrications managed to adapt the instantly recognisable Walky plenum onto what is a completely unrelated engine will blow your mind. But more on that later. 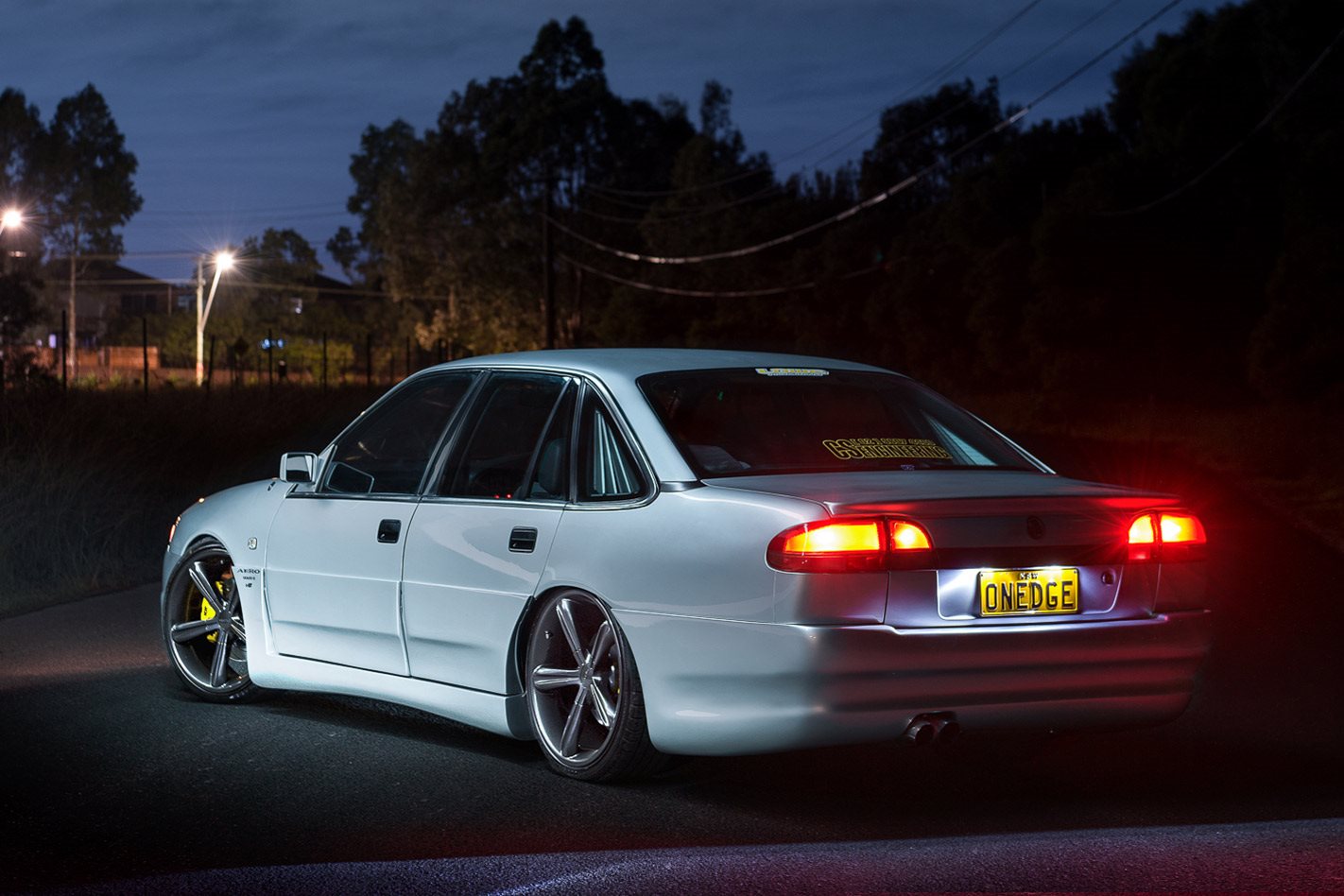 The car originally came about because Scott found himself staring at an assortment of parts on his garage floor, and had the realisation that he could turn them into a pretty nifty little street car for not a lot of coin. He had a set of 20-inch wheels, some HSV brakes, a supercharger kit for an Ecotec V6 and a built transmission, so he went in search of a car that met a very specific set of criteria. “It had to be a V6 auto Berlina without IRS or a passenger airbag, and it had to be silver because I had always wanted a silver one,” Scott says. 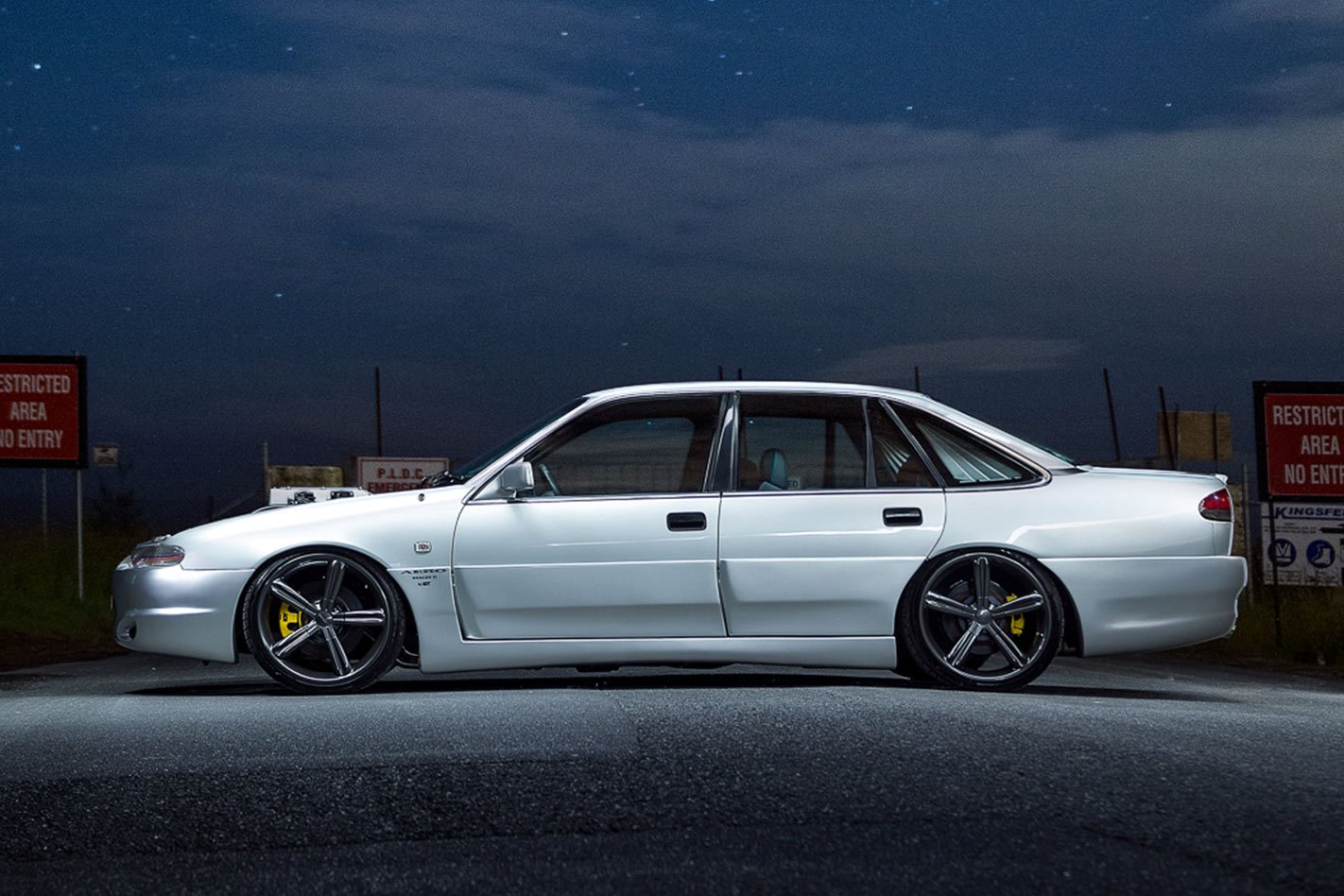 The HDT VS Aero kit is a point of difference for the car visually, and the VS S-pack rear lip spoiler is a nice touch, too. Thanks to the Walkinshaw plenum poking through the bonnet, the car looks for all money like it’s Holden-powered, until you stop for a closer look

The search was short-lived, because he found the perfect car locally and had slapped down a deposit within a matter of hours. “I put all the parts I had into it and picked up a few other bits and pieces along the way, but it just kept blowing out. I swapped out the blower for a turbo kit, which I got quite cheap and made a custom intake manifold for. That combo went well, but with E85 and an external gate it wasn’t all that streetable.” Neither was it particularly reliable. 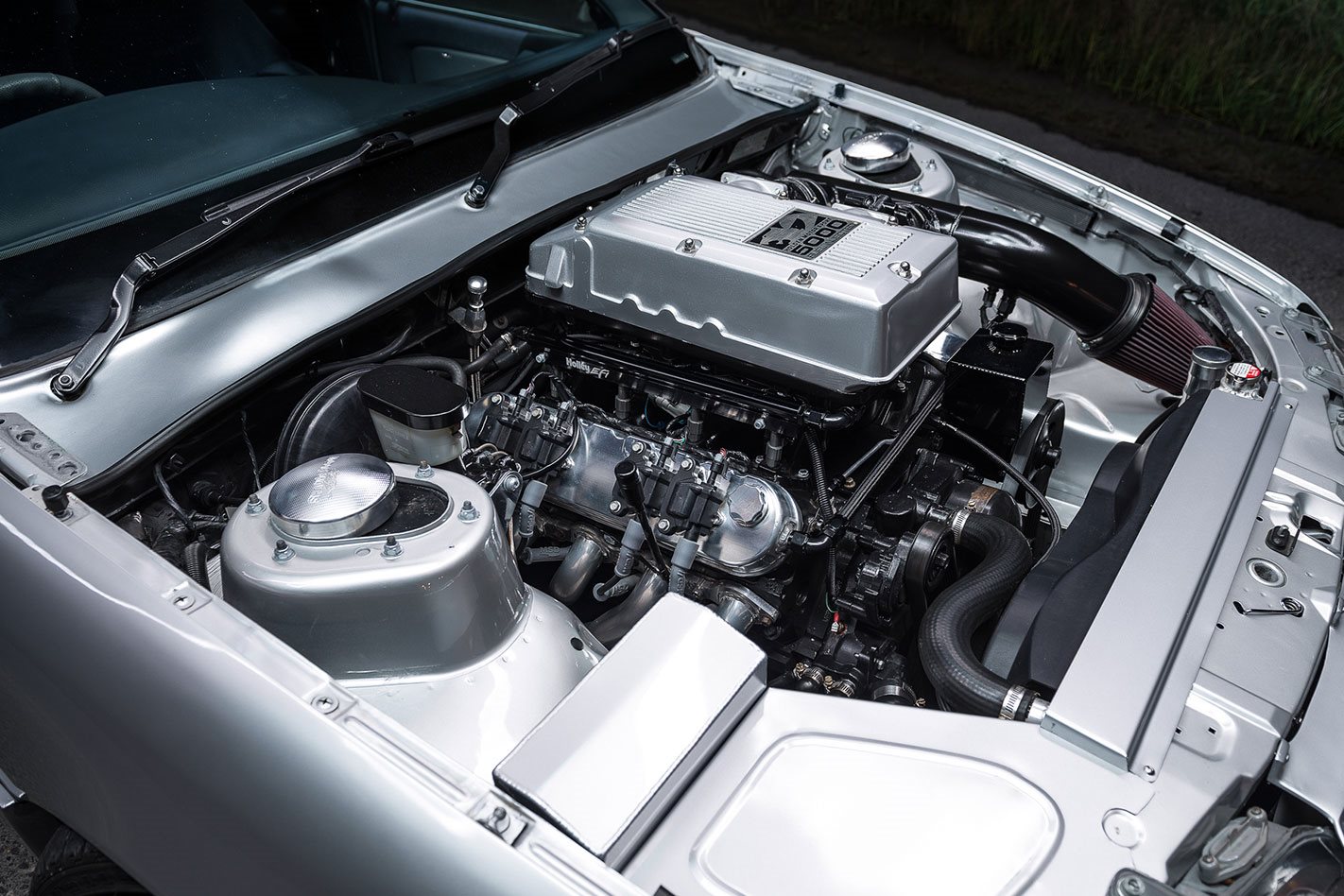 Scott and his mate Matt tidied the ’bay up and gave it a respray, but left the firewall black so the brake booster and other unsightly hardware blended into the background

One day when the idiosyncrasies of the boosted V6 were getting the better of Scotty, he casually remarked to a mate that he should toss the whole set-up in the bin and move to a naturally aspirated V8, so he could jump in the VS and cruise it without a worry in the world. As luck would have it, said mate knew a bloke who had just introduced his VY SS ute to an immovable object at speed, and was looking to sell the wreck, complete with a cammed LS1 and associated hardware. 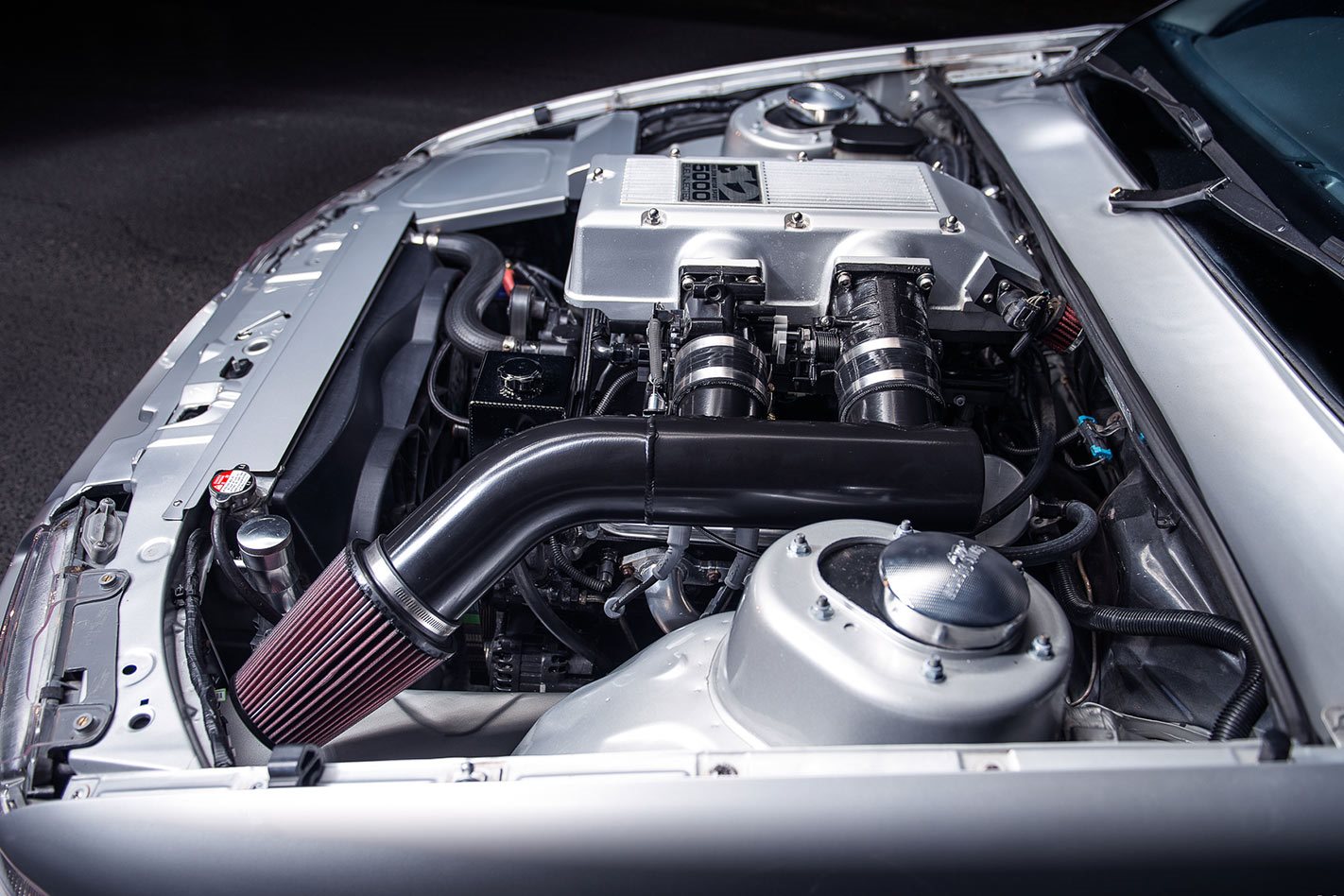 The Group A plenum is both the literal and figurative centrepiece of the engine bay, but there are plenty of other trick bits including billet rocker covers and master cylinder cap and bracket, plus billet strut tops

“It was a case of right time, right place, and I bought the ute complete for a good price,” Scott says. “Then I called Jason from Tuff Mounts and told him to send me everything to drop the LS1 into my VS.”

Jason obliged, and Scotty got busy stripping the ute and selling off anything he didn’t need to help bankroll the conversion. He also got rid of the potentially troublesome 4L60E ’box, instead opting for a shift-kitted Turbo 400 with a 3000rpm converter. 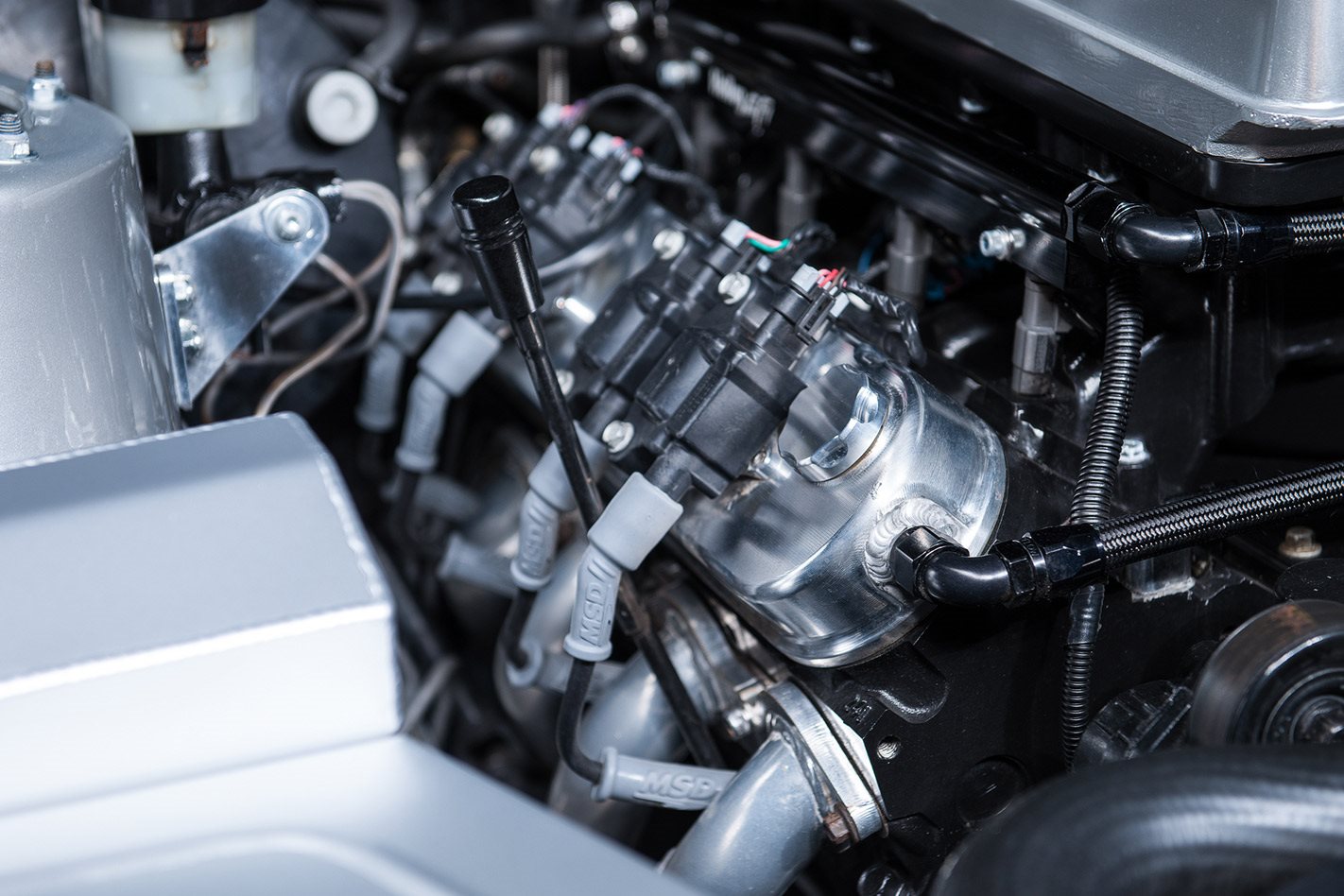 The engine bay got a bit of a freshen-up by Matt from Dr Jones Bodyworks, who helped Scott strip, smooth, rub and paint it before the engine went in. After dropping the 5.7 into its neat new home Scotty called on another mate, Steveo, who adapted the harness from the VY into the VS, and connected up all the sparky bits. He must have known what he was doing, because the car fired on the first hit of the key. Chris at CS Engineering took care of the single three-inch exhaust system, and while it’s nice and quiet for the regular street duties the VS performs, Scott will probably look to upgrade it at some stage. 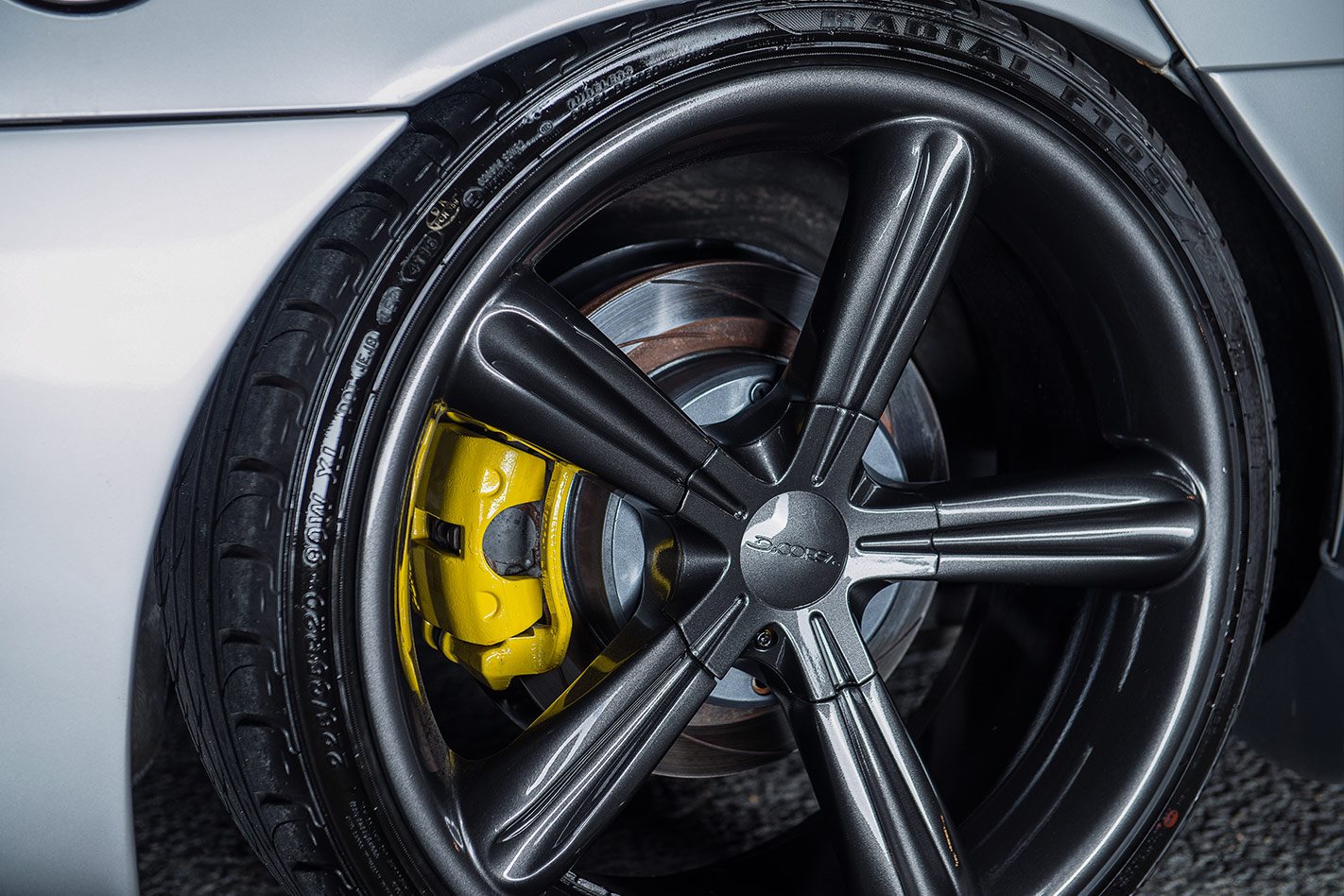 After six months of happy LS-powered cruising, Scotty was chatting with Commodore guru Chubby, and a plan was hatched. Chubb knew of a local fella who was offering the top half of a Walky manifold for sale, and the pair reasoned that they might be able to mate it up with the bottom half of a Holley LS intake manifold. 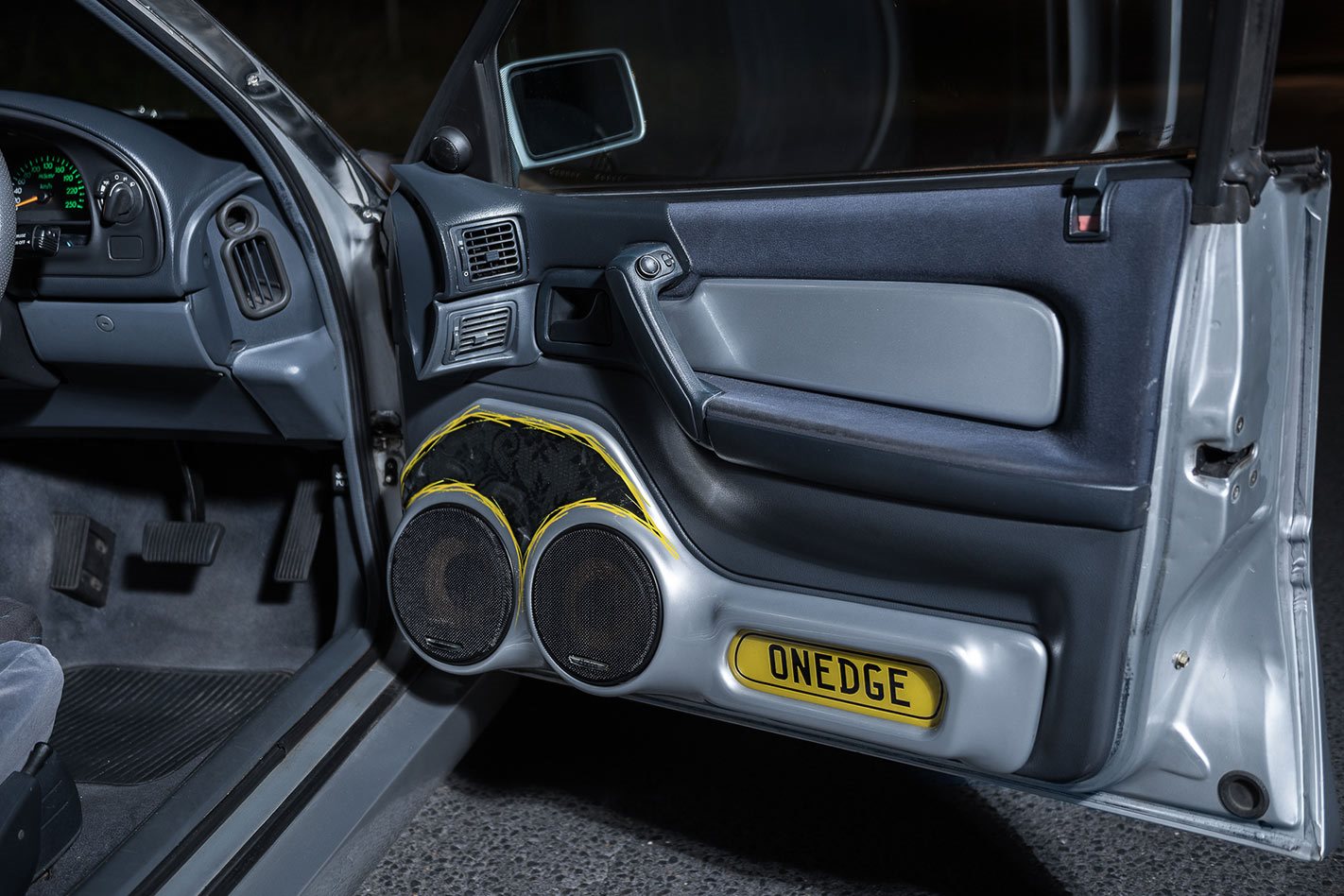 One of the joys of modifying a Commodore is that you can end up with a great-looking cabin without spending mega-bucks on a custom re-trim. . Darryl at AIS custom-made the trick-looking door pockets and parcel shelf

Holley offers an adaptable range of low-, mid- and high-rise intakes for LS engines. Using Holley, custom, and third-party manifold tops, lateral-thinking gearheads have successfully utilised these manifolds in a vast range of configurations including forward-facing single throttlebodies, tunnel ram-style down-draught EFI and carby set-ups, and even as 71-series blower manifolds. It was wishful thinking that the Walkinshaw plenum would bolt straight up to a Holley mid-rise EFI manifold with nothing more than a simple laser-cut adapter, but for all the times things don’t go according to plan with modified cars, sometimes they work out perfectly. 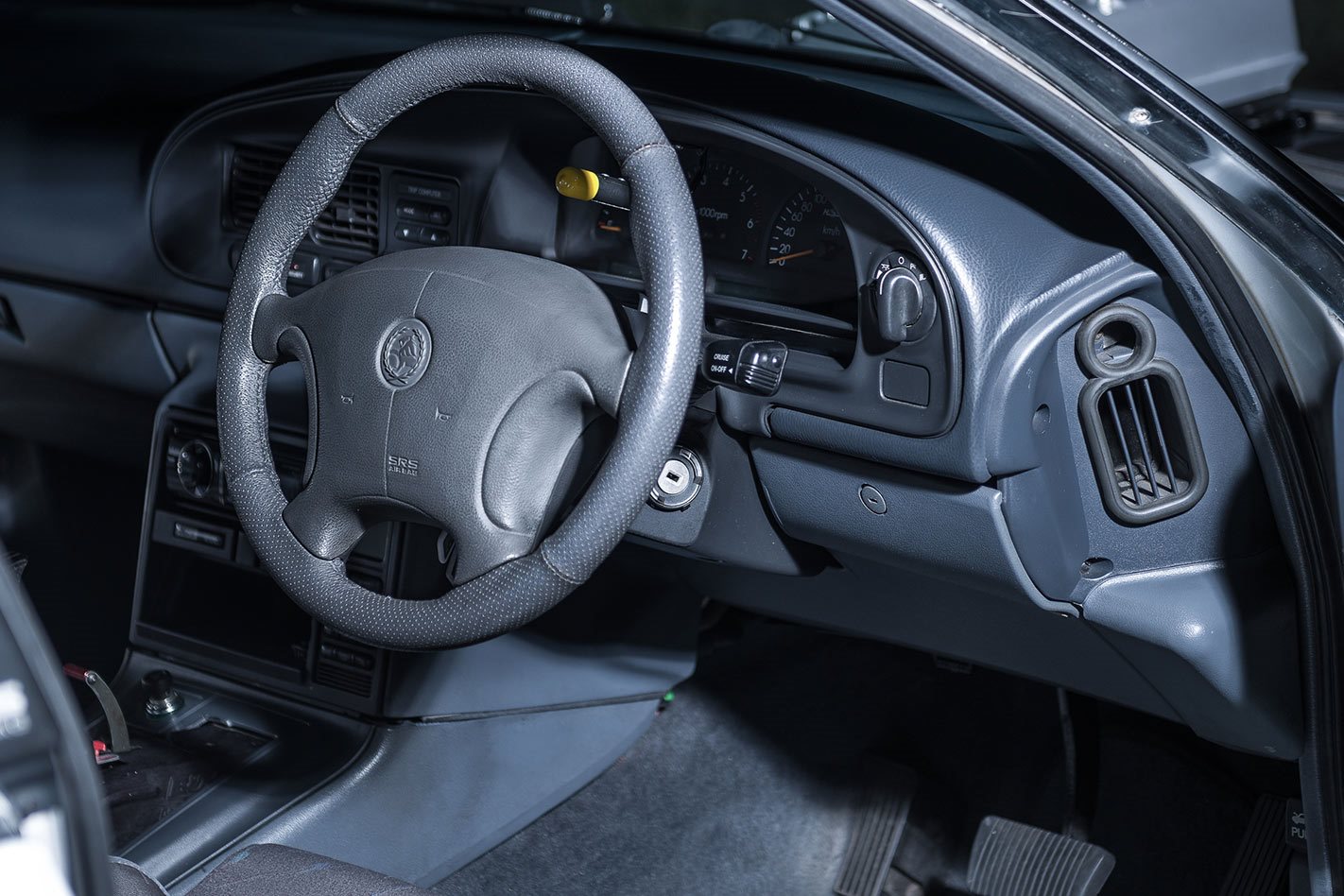 “There really wasn’t much to it at all,” Scotty says. “I bought the Holley manifold and Chubb and I sat the Group A plenum on top; it looked like it would almost bolt straight on! We made a template for an adapter plate, had it laser-cut, drilled and tapped, and happy days – it worked first go.”

A number of Facebook warriors laid into Scotty for somehow ‘ruining’ a Group A manifold, so for the record, we can confirm that no Walkinshaw manifolds were harmed in the making of this car. The plenum is completely unmodified and could be removed and bolted back onto a genuine Walkinshaw in a matter of minutes. “It’s amazing the people that said they were going to do it or had already done it, but as far as we’re aware we were the first,” Scott says. 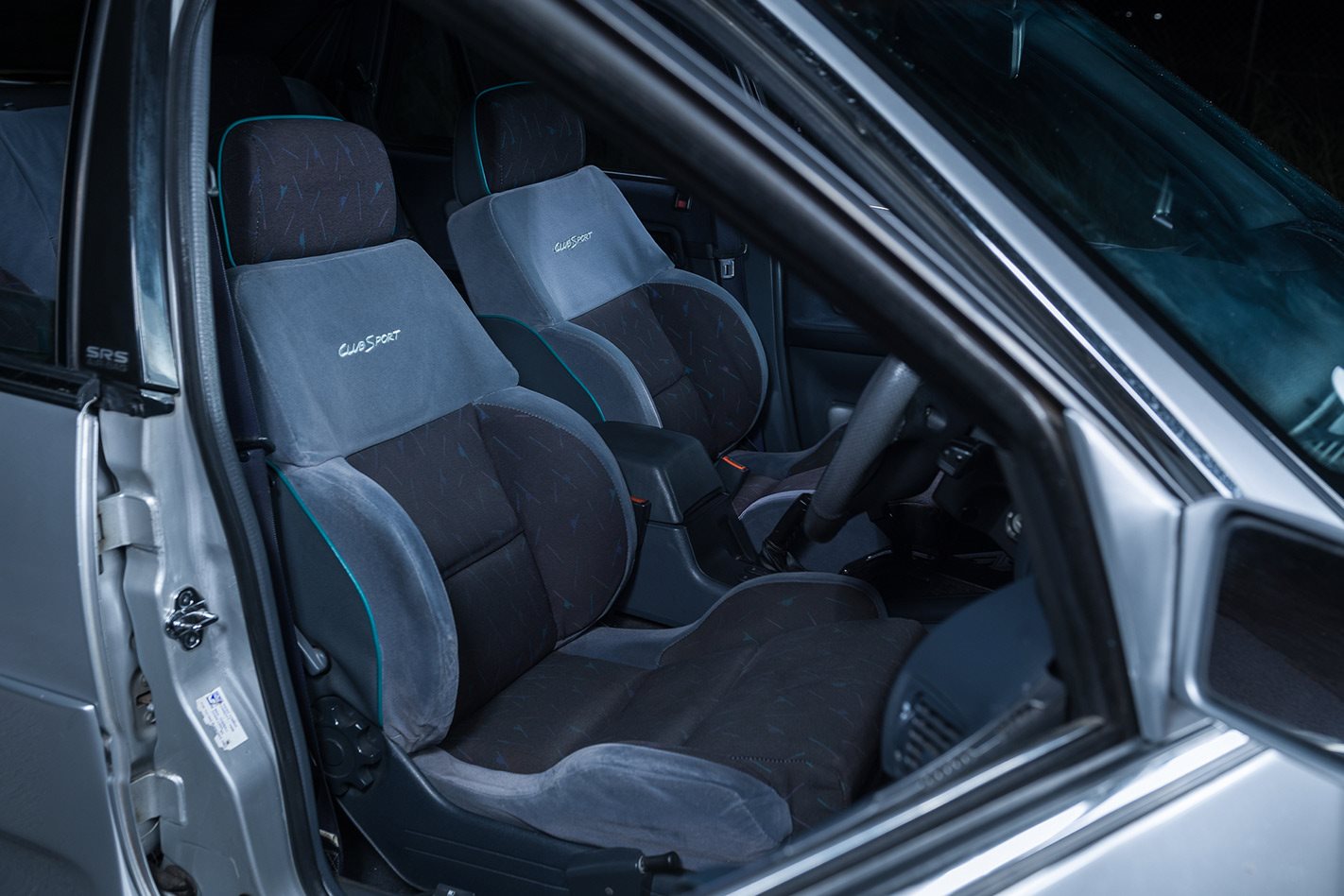 Rummaging around on the internet, Scott hooked himself up with a set of HSV ClubSport Devonish seats and a Statesman leather steering wheel

At the same time the car copped a visual overhaul with the addition of an HDT Aero bodykit. “I’ve always been a fan of Aeros as I had one as my high school formal car,” Scott says. “It took a while to track down a kit, but when I did I had Matt at Dr Jones Bodyworks clean it up for me, then Jason at Lowe Fabrications painted it before Matt and I fitted it up.”

The car has only been street-tuned so Scott isn’t sure what sort of power it makes as yet. He has a more aggressive cam to slot in and plans to manualise the auto, and once that’s sorted he’ll get it dyno-tuned and send it down the strip at Sydney Dragway. In the meantime, he intends to continue cruising it relentlessly.

“It’s very much a street car; I get it out nearly every weekend for a cruise or to take it to a show,” Scott says. It’s reliable, streetable, quick enough to be fun, and it turns heads. Mission accomplished! 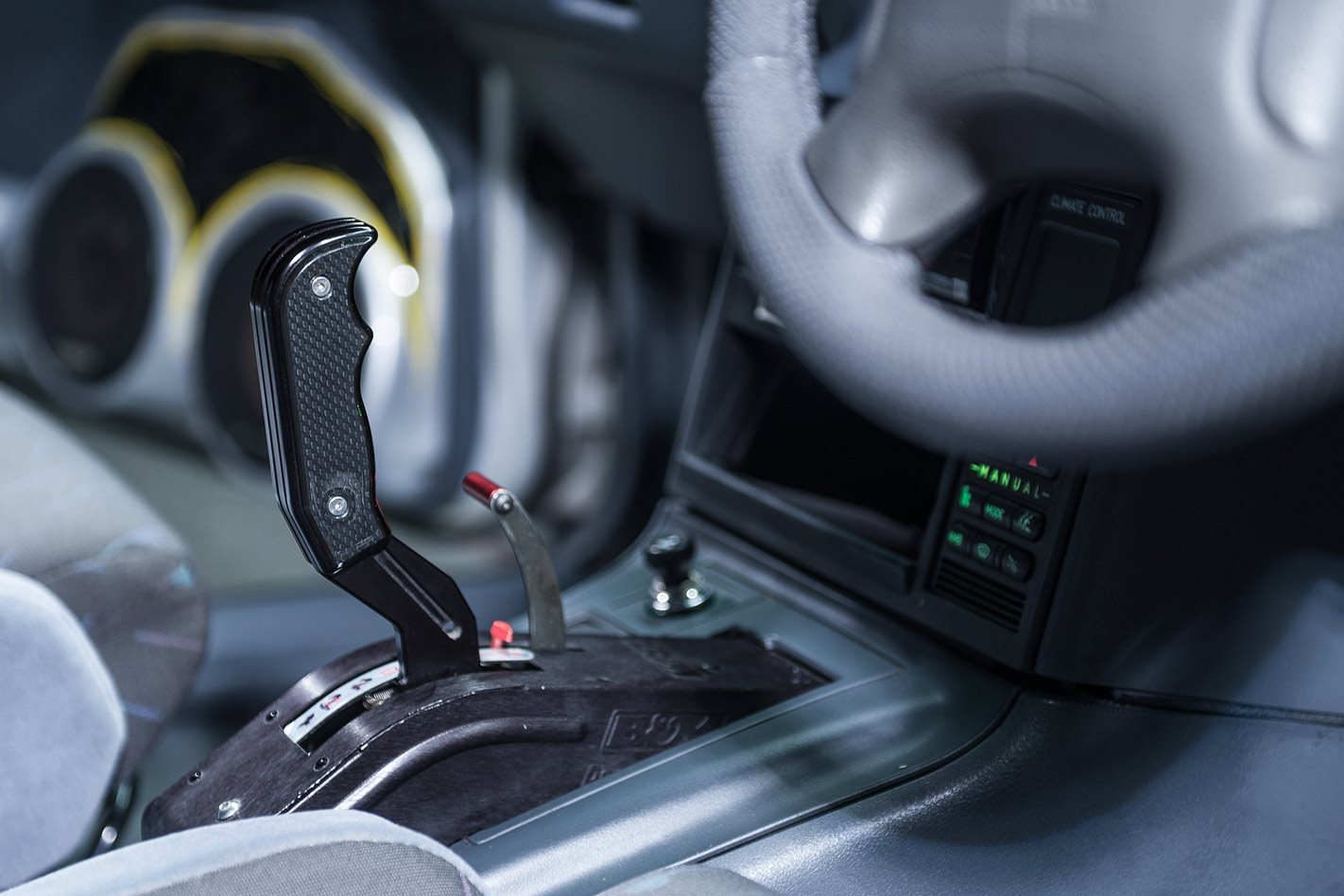 Scott then added an Auto Meter shift light, B&M shifter and a comprehensive audio system consisting of a bunch of Clarion speakers and amps

HOW TO LS THE WORLD

There is more than one way to skin a cat when it comes to jamming an LS in a second-gen Commodore, but Scotty speaks with the wisdom of experience. The guys at Muscle Garage (the home of Tuff Mounts) are an authority on the matter, so Scott turned to them for a holistic solution. Keep in mind that Scott is running a Turbo 400 transmission, and that different transmissions may require different hardware.

Tuff Mounts engine mounts, transmission mount and transmission crossmember got the engine and ’box physically mounted in the car. The starter motor was relocated using a starter relocation kit from Castle Auto Electrics, and it works a treat with a TCI flexplate. Pacemaker makes headers specifically for this conversion, and Scott can happily confirm that they are compatible with where the Tuff Mounts position the engine.

Scott retained the VY sump, but chose to clearance the crossmember ever-so-slightly to create a little more real estate. Showing some forward thinking, Scott installed a bung in the sump for an oil return line should he decide to add some boost down the track. 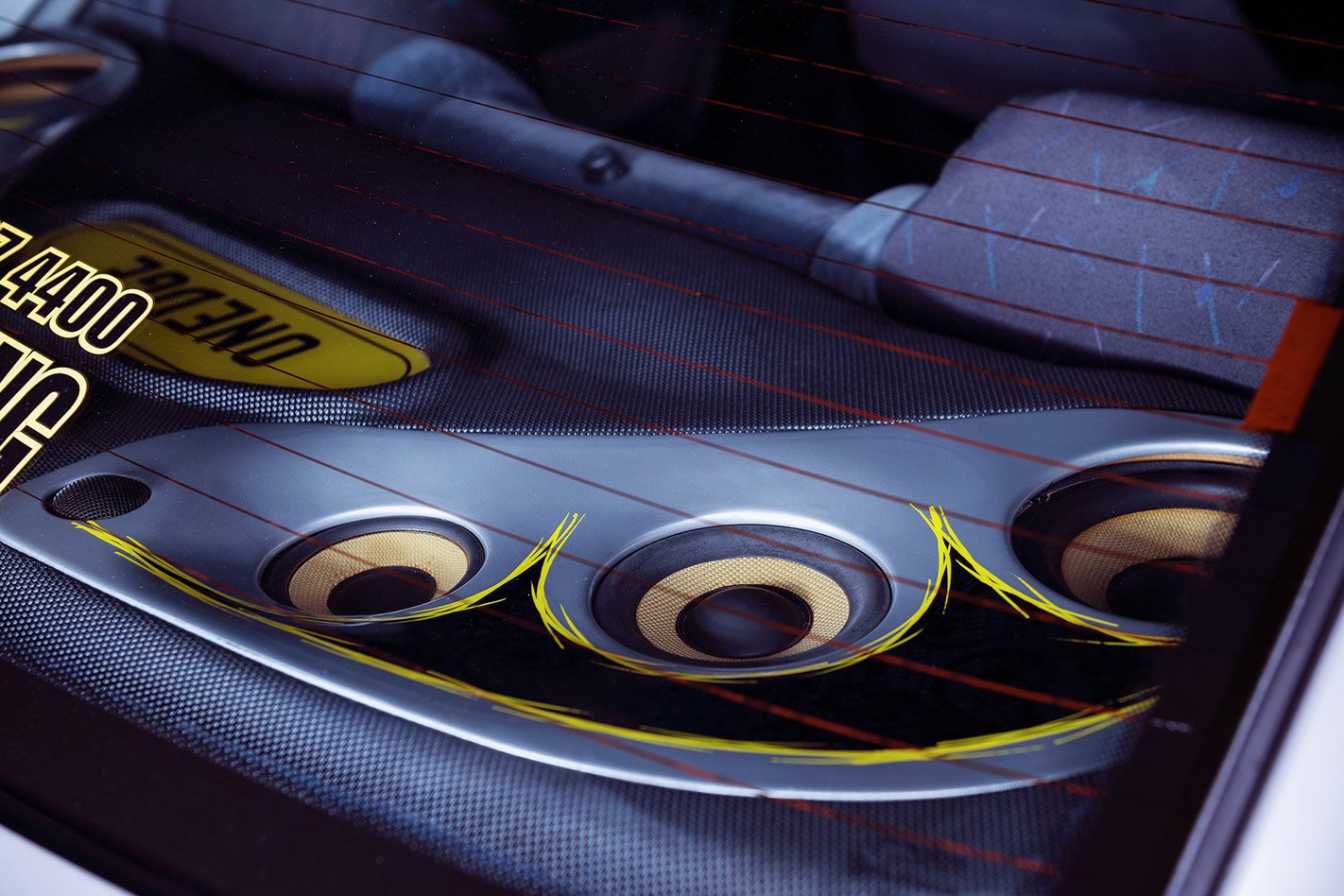 For cooling, Scott opted for a cheap generic alloy radiator. Teamed with BF Falcon twin thermo fans, it keeps the car cool and hasn’t given him any grief as yet. For fuelling, he chose a Walbro pump in the factory tank, with the fuel system set up in a deadhead configuration.

Scott had a friend dissect the VY harness that came in the wreck and install the necessary parts into the VS, along with the VY ECU which was unlocked and tuned by Dick’s Electronics. The tailshaft is a custom piece by Rick’s Driveshafts.

“Because a mate of mine had done the conversion in his VN, I kind of knew what to expect,” Scott says. “I wouldn’t say it was difficult, but parts of it were challenging because there are several ways to do certain aspects of the job; it’s a matter of figuring out the best way for you and following it through. Little things like power steering lines can be a pain in the arse, but there’s nothing overly difficult involved.” 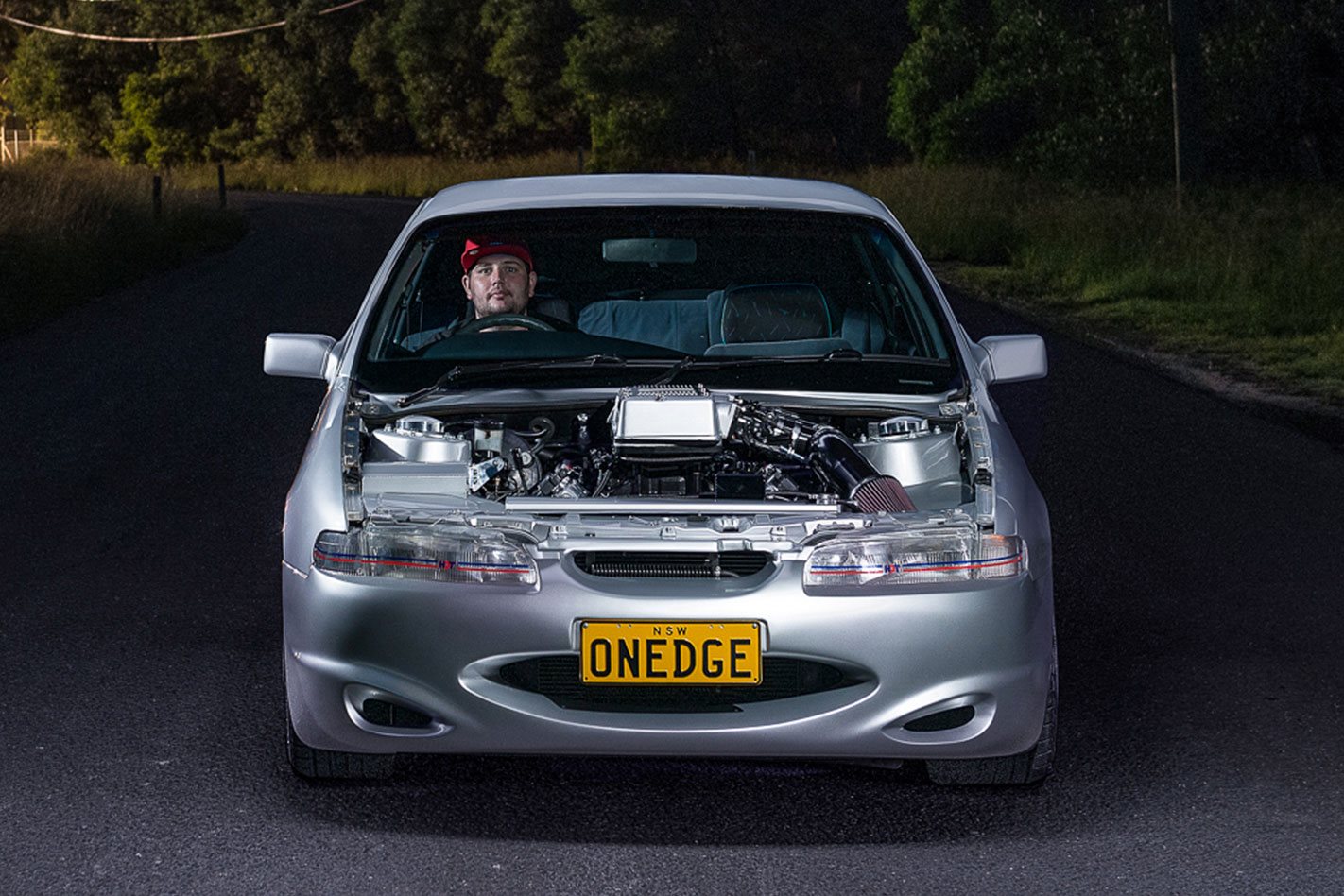