With a tweaked LSA hidden under its stock bonnet, this VP Calais blends 90s cool and sleeper speed

WE’RE used to looking for sleepers these days, but a casual glance at Shaun Martuccio’s VP Calais would lead you to mistakenly pass it off as just another grandpa-spec two-tone bowls club rig. Except it has over 600hp to throw down in a street fight, and is capable of blazing the stock six-inch-wide rears into a haze at over 80km/h!

It didn’t start off like this, however, with Shaun’s goal of having a sweet street car that is 100 per cent reliable starting way back when Silverchair was still a rock band and phones didn’t have cameras. 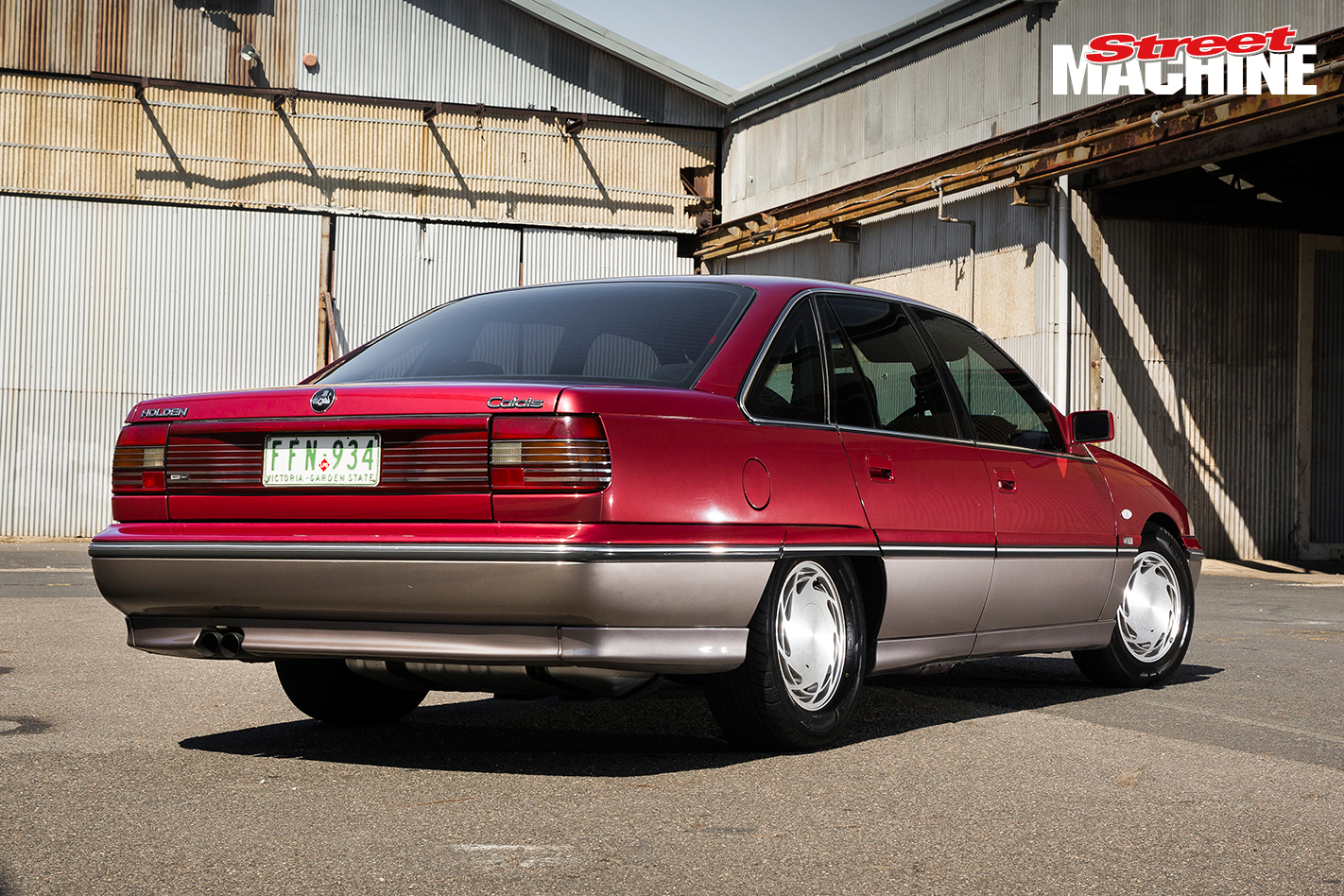 “I had an HZ Kingswood back in 2000 when the five-litre scene with VN-VS Commodores was really big, so I decided to look for a clean VP Calais,” Shaun explains. “I found this one, which was a completely standard, one-owner car, and 15 years later I still have it!”

Shaun didn’t waste time tricking up the iron lion, putting the Calais through a few guises, including trying a VS HSV six-speed manual and twin-throttle intake, followed by a single-turbo set-up. “I couldn’t believe the standard 5.0-litre lasted over two years, but it started to get tired and the rear main seal was leaking oil like crazy. This is when I decided it was time to go LS.” 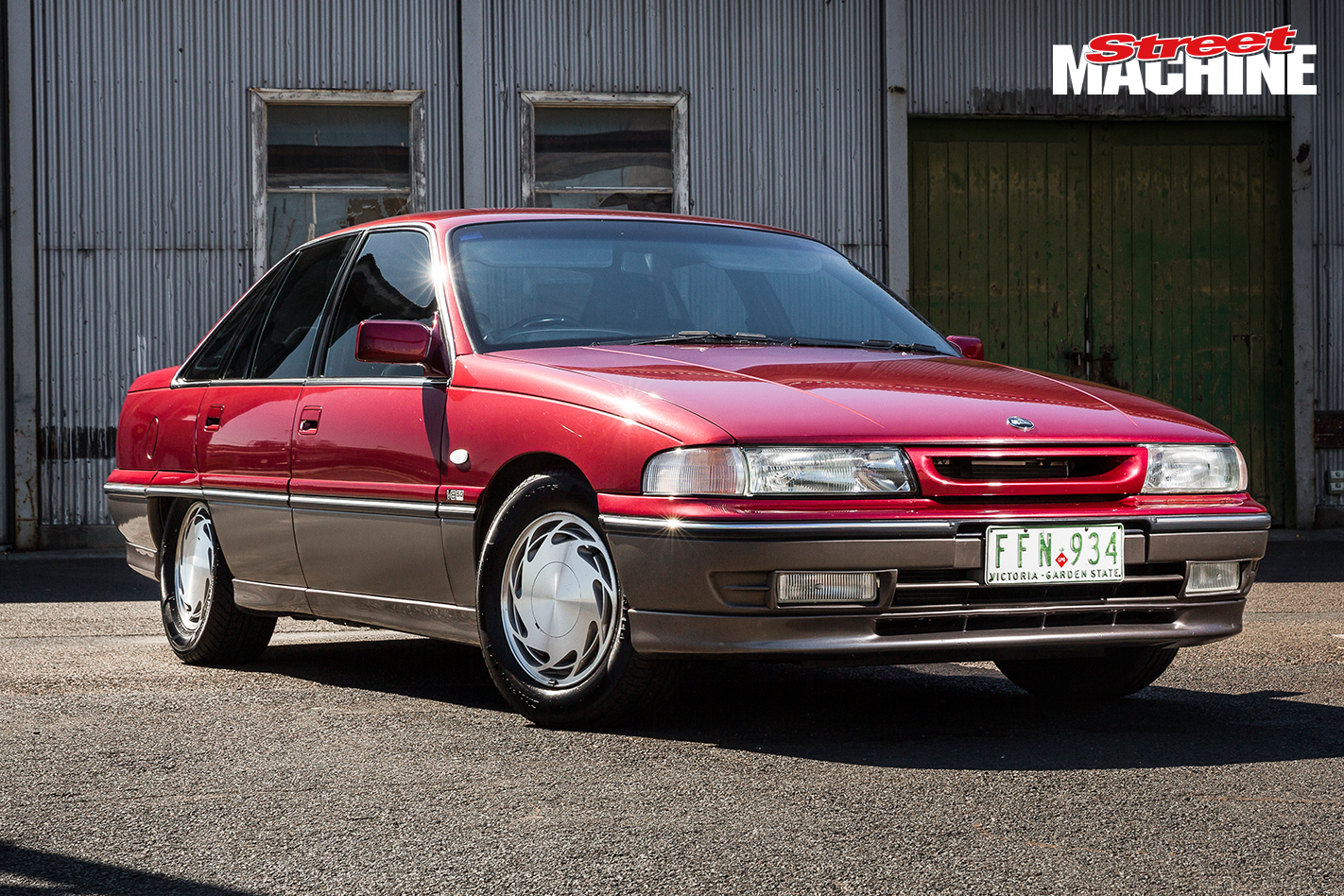 Starting with a stacked 2004 Statesman, the Melburnian pulled the 5.7 and did some basic maintenance with belts and gaskets before fabbing his own engine and transmission mounts with his dad. “We do everything ourselves at home in the garage, from the main mounts to brackets to hold intercoolers, building engines and gearboxes and more,” Shaun explains.

“I pulled the Turbo 400 gearbox for $20 from the boot of a Jaguar that was going to scrap. The ’box was a bargain of a lifetime as it was from a 454 big-block US truck, so it already had a heap of stronger bits in it from the factory. My dad and I did a full rebuild on it with the usual tweaks to get it to hold up to any abuse.” 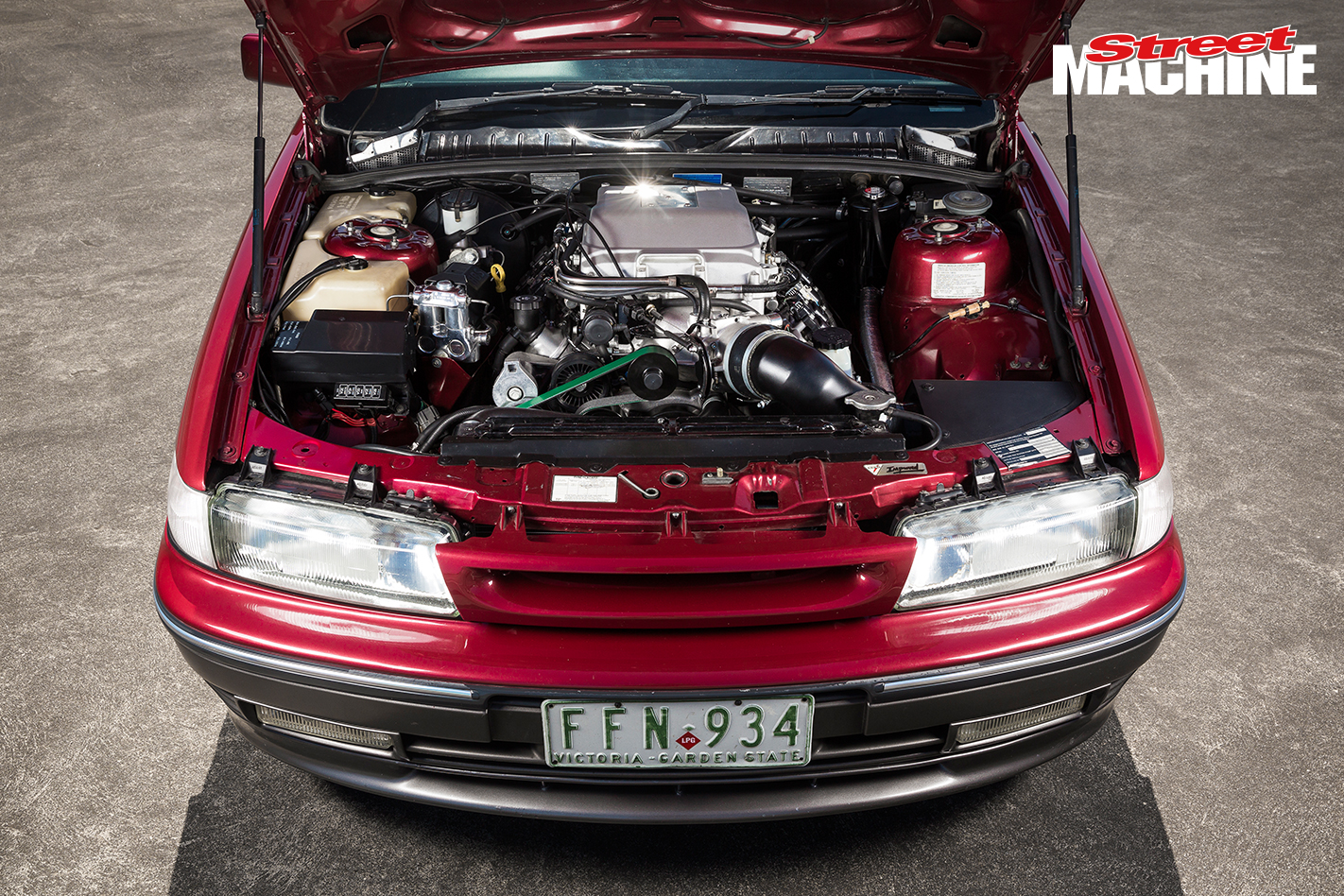 Shaun got TCE to build a 3000rpm stall converter suited to a boosted application. “The LS1 and high-stalled TH400 was a great smooth combo for the street,” he says. “I drove it for over a year and even ran a 12.5@111mph on street tyres at Calder. However, with over 215,000km on it, the LS1 chewed oil like crazy and I got sick of filling the oil every 400km.

“I bought a six-litre Gen IV L98 to put in with a blower on top, but a mate who works for Holden called and told me he could get a good price on a brand new LSA crate motor. After a night of no sleep thinking about it, I called him in the morning and said: ‘Stuff it, place the order for one.’” 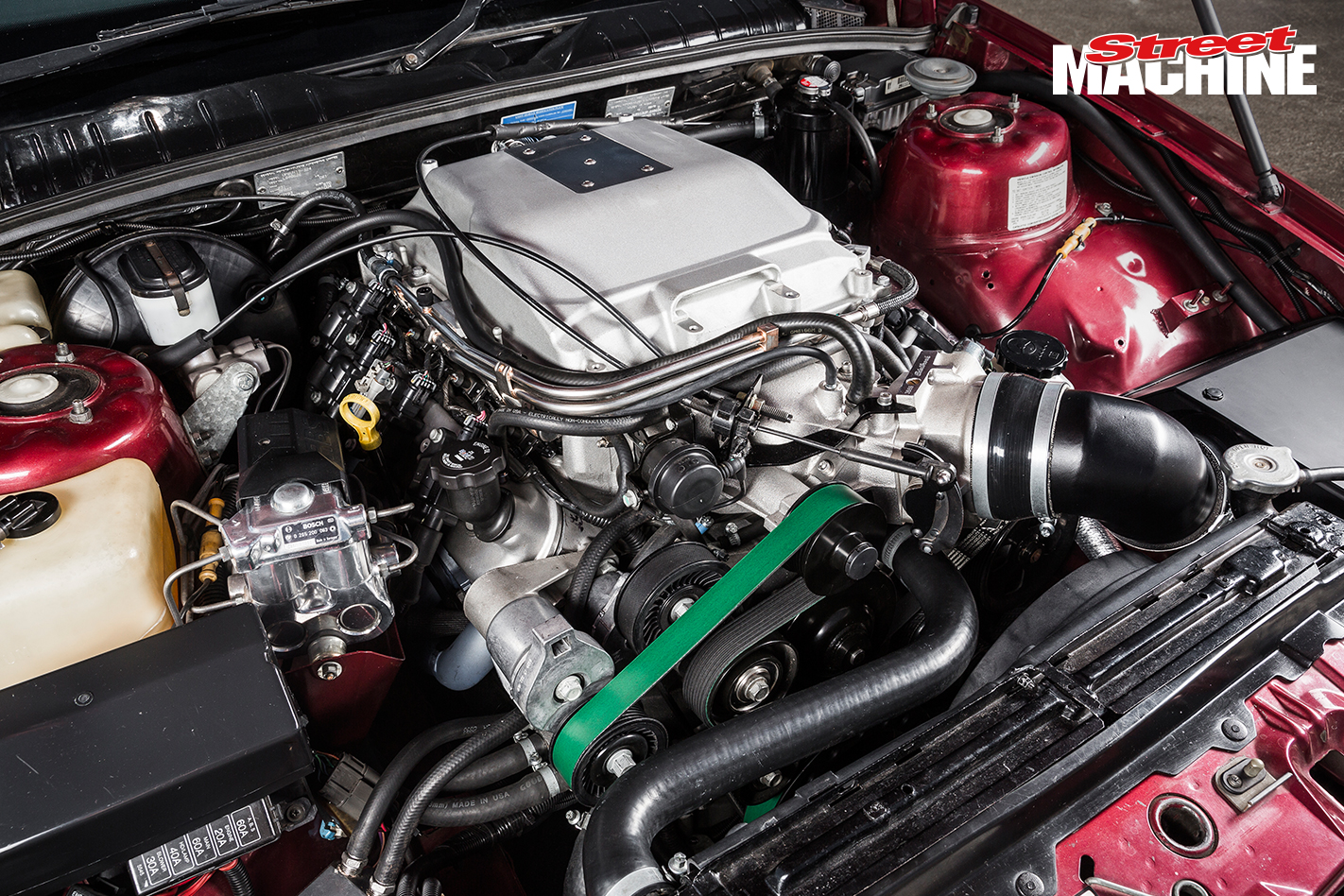 Having already stuffed an LS into his VP, the job of making the Gen IV LSA work was simplified, but did bring about a few headaches, the worst of which was the physical height of the supercharged motor.

“When the crate motor turned up I pulled my old LS1 out and swapped the VY Commodore sump over, then dropped the LSA straight in with the same Pacemaker extractors and auto as the LS1,” Shaun says. “The blower was hanging out of the bonnet and I had considered cutting the bonnet, but then I thought that I had never seen a VB-VS Commodore with an LSA all under the standard bonnet. So I went on some US forums and found an LSA top hat from a Cadillac CTS-V and got it sent over to me, as it has a lower height than the HSV motor, which is the same as a Camaro ZL1. 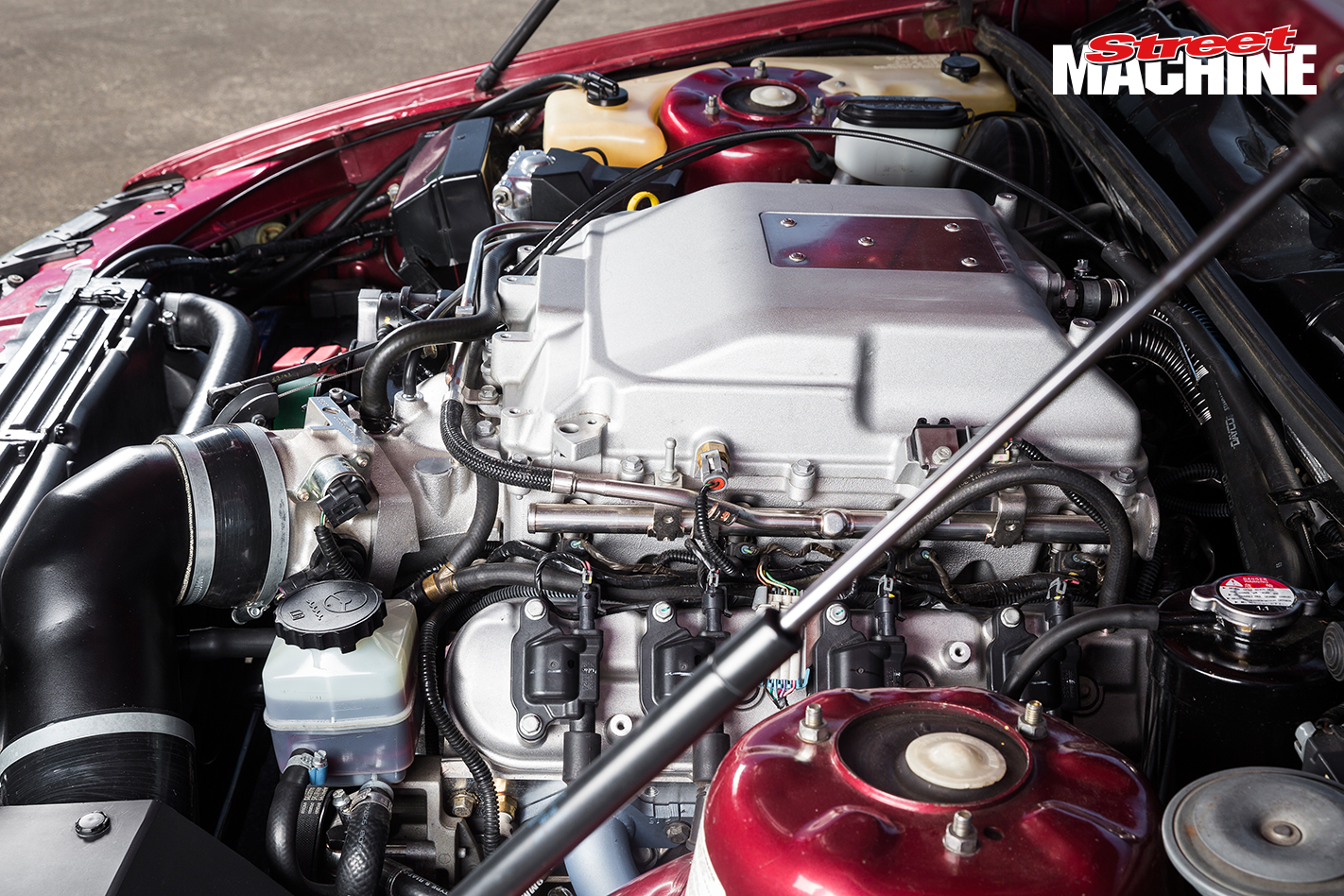 “I also spaced the front K-frame down 30mm and fitted longer steering arms to suit, but I didn’t want to space it down too far as I didn’t want to alter the steering geometry too much. With the lower K-frame and Cadillac hat fitted I was able to get the bonnet shut with just enough clearance.” 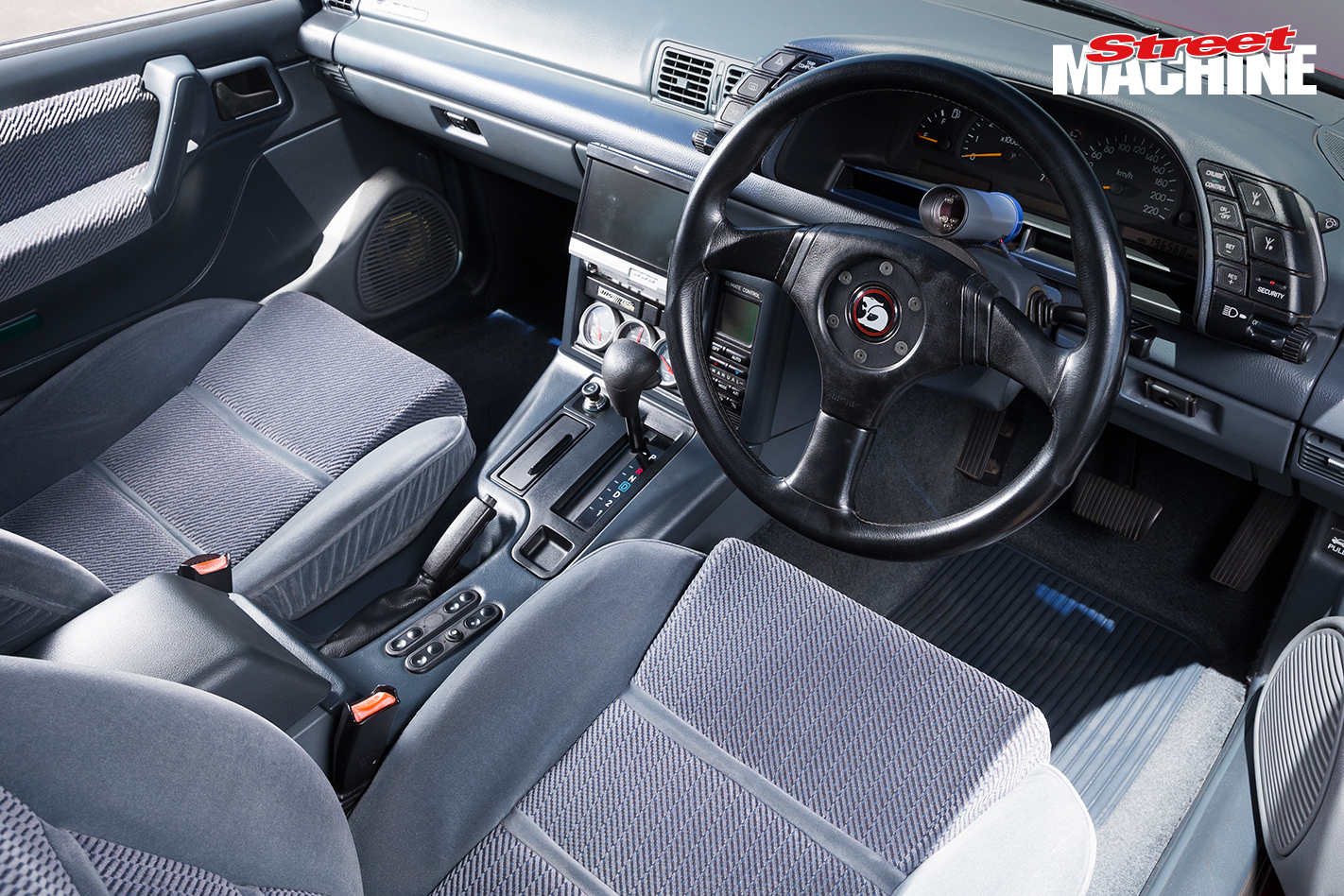 Even though the LSA is a Gen IV motor and the LS1 is a Gen III, there were only a couple of small wiring jobs to make the LS1 loom work on the factory blown motor, as Shaun retained his previous VY PCM. He also whipped up a custom four-inch intake to feed the beast while he waited on PWR to make a custom heat exchanger for the factory water-to-air intercooler set-up. 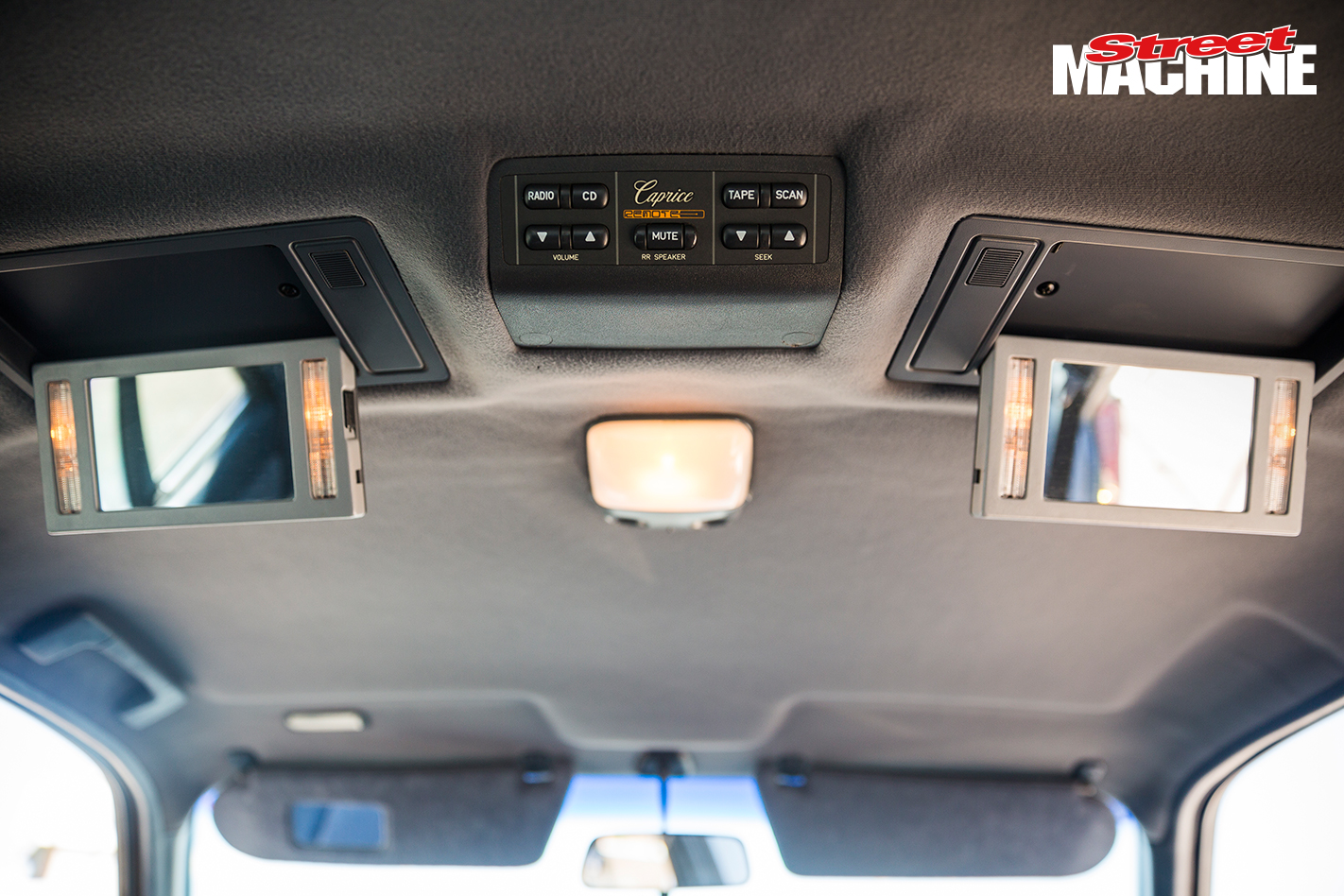 “I upgraded all the intercooler water lines from 15mm to 19mm and fitted a 1.5-litre reservoir to help keep the intake charge temps down, as forums have said there is a 10kW-at-the-wheels loss with the CTS-V blower hat I used. There is heaps of info on these motors from the USA, as they’ve had them since 2008! 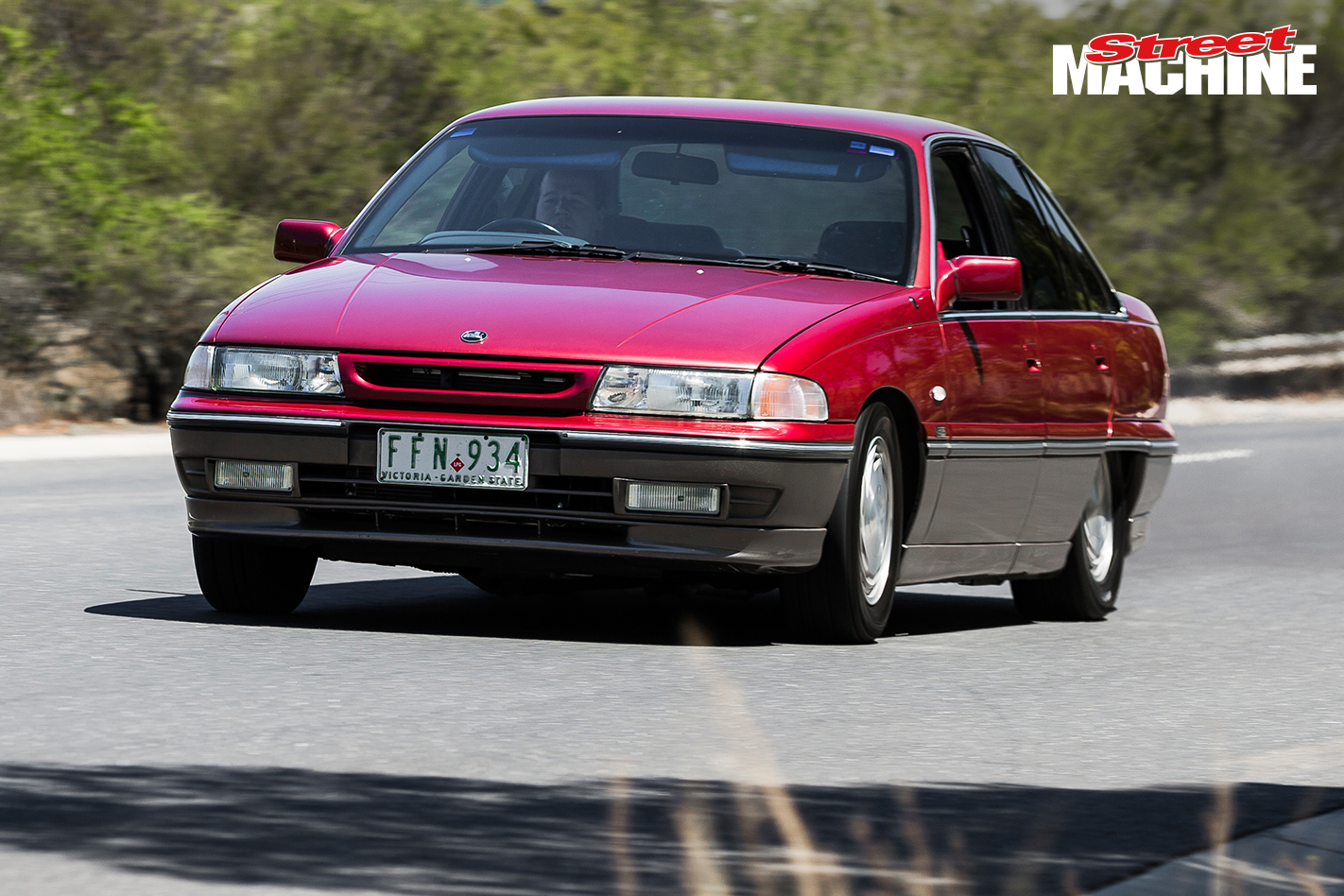 “I called my mate Jarrod Mills down at ACCEL Garage to come to my place to flash on a run-in tune for me. I did 1000km on it with not a single problem, just turn the key and drive. Then we put the car on the dyno and finished off the tune; I’m up to 2000km now and it runs like a dream!”

With stock injectors and an in-tank Walbro pump pushing the go-juice, Shaun doesn’t have any grand plans for exotic fuels or winding up the ponies just yet. “I really need injectors and a better fuel system for E85, but it doesn’t need any more power just yet. I want to do some mods to help with camber issues when you hit it, as it just fries second gear at 80km/h, so that’s useless. 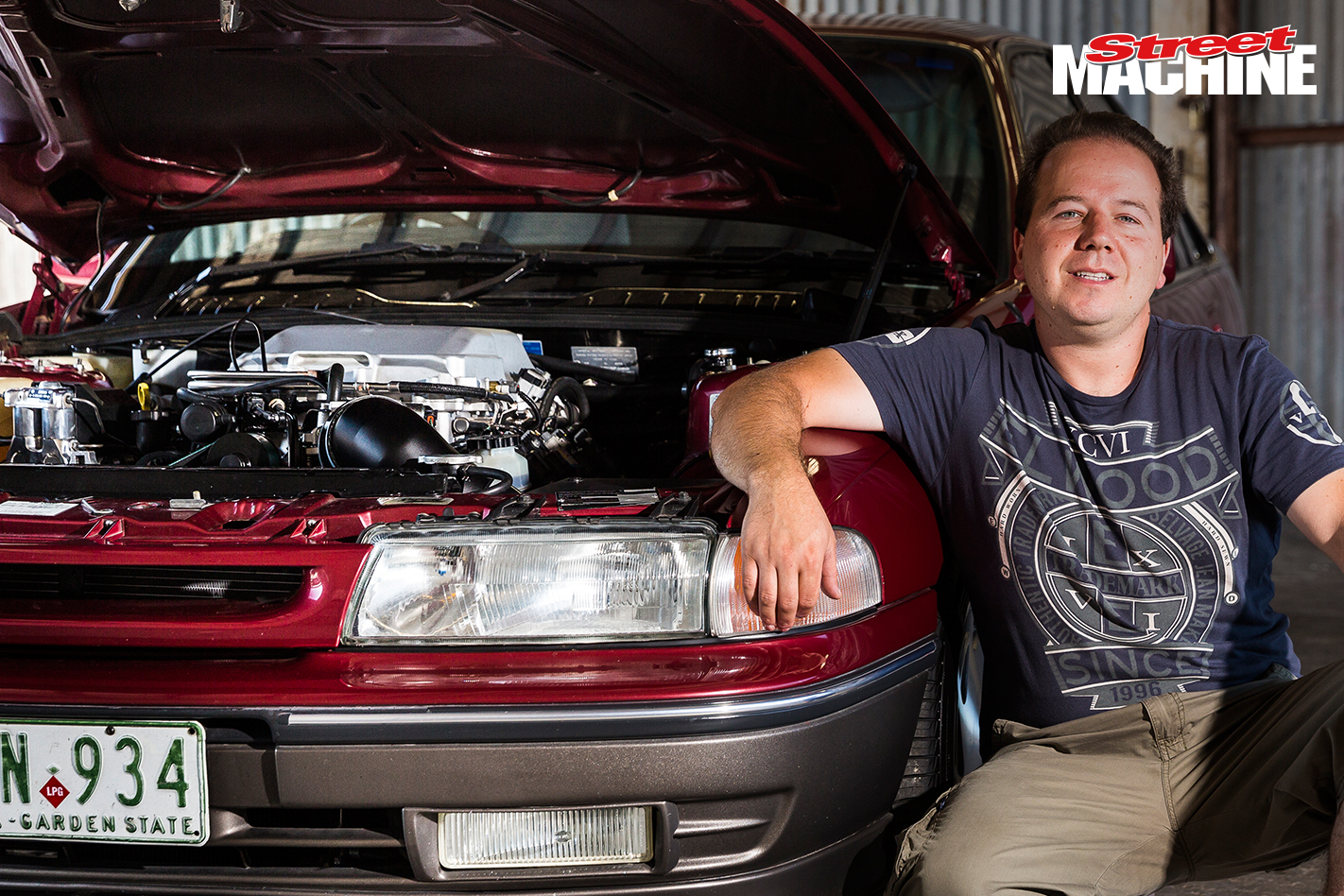 “In a couple of months’ time I hope to get it out to Calder to see what it runs down the quarter-mile. I’ve had it on the weighbridge and it comes in 300kg less than a VF GTS, so I hope it runs 10.90s.”

THANKS
My dad for all his help on the car and patience over the years; Jarrod Mills at ACCEL Garage for the gun tune on the LS1 ECU 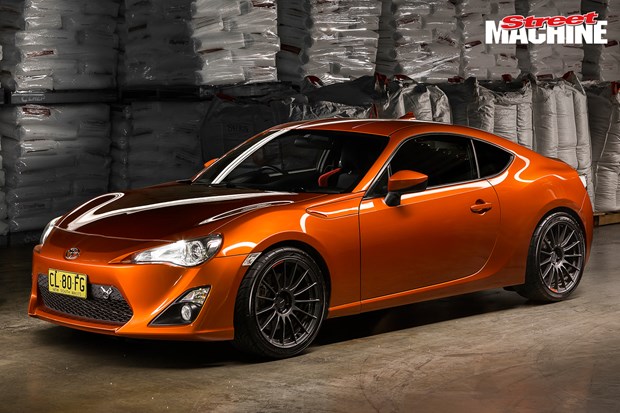 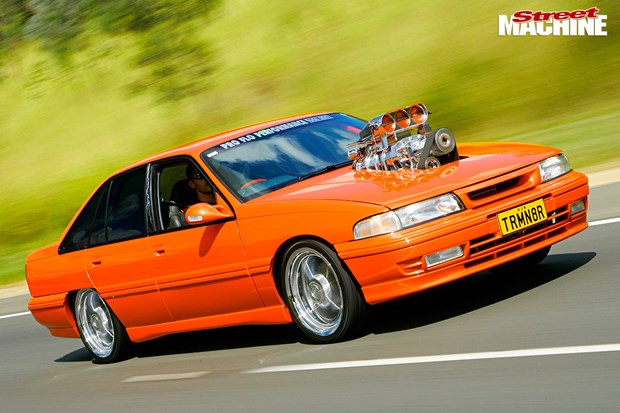 With punchy orange paint and a small metal mountain rising from the sheetmetal, Joe’s VP Commodore mixes old-school street muscle with a twist of hi-tech