I figure the pics might give this one away, but Steven Thomas likes to go fast. Back in the day, he used to play around with rotaries. “I had a few RX3s and a couple of RX4s,” Steven says. “We didn’t have too much cash and they were fast and cheap. For 1000 bucks you could have a 13-second RX3!” Those cheap thrills gave Steven a lifelong unquenchable yearning for speed. But, funnily enough, it was self-preservation that led to the creation you see on these pages. Steven used to race motocross, but it isn’t the safest sport around and injuries are pretty common. After starting his own business, getting married and having kids, Steven thought a street and strip monster would be a safer way to get his kicks. 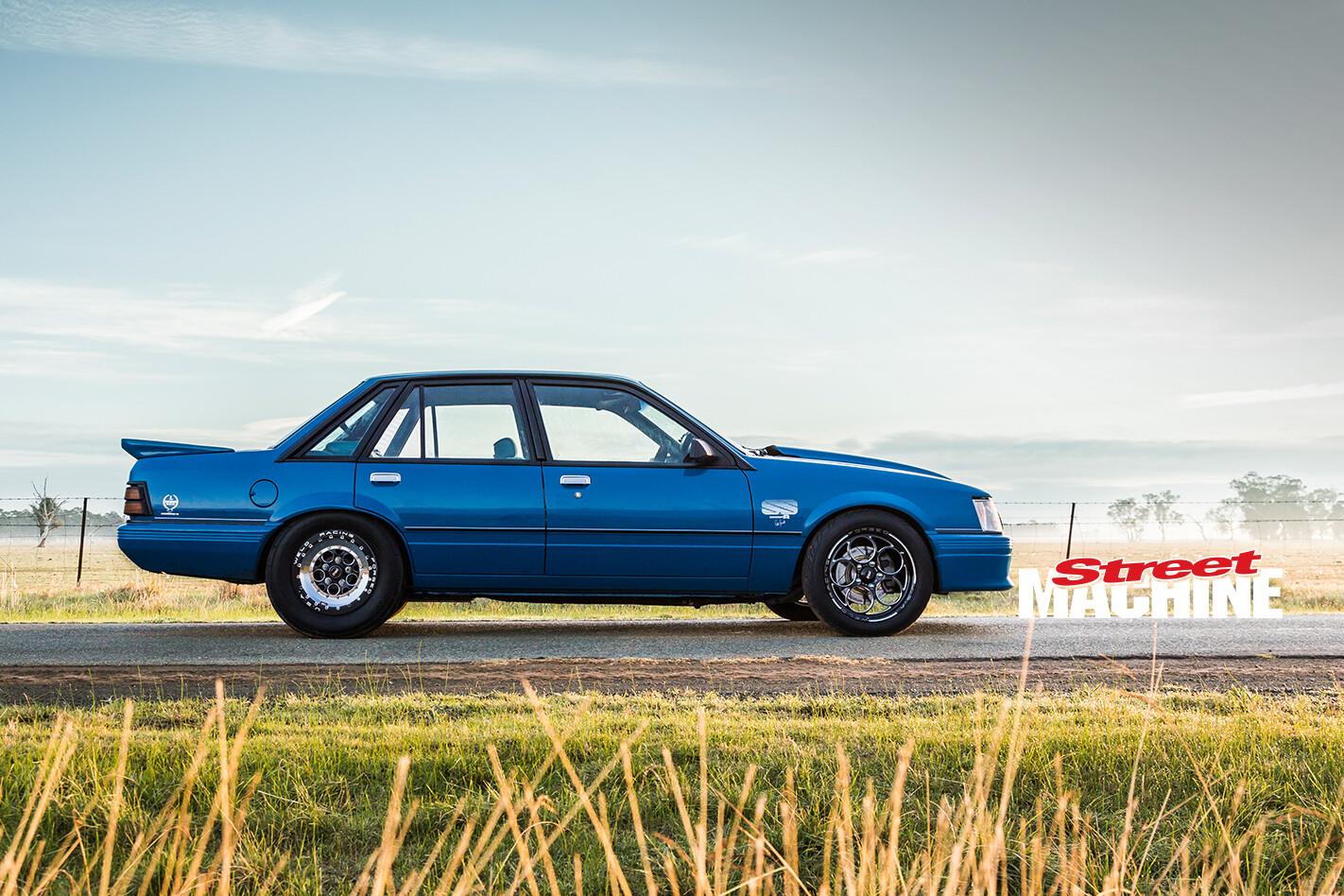 While the old chook-cookers were fun, Steven always pined for bigger cubes. “Ever since I was a kid I’ve always wanted a blue meanie,” he says. “So I thought I’d build a tribute and go silly.” Silly indeed – to the tune of 440 rear-wheel kilowatts and mid-nine-second ETs at around 150 mph! When he first started looking around for a project, Steven got pretty lucky and came across this VK V8 – freshly painted, with the correct body kit and stickers. He jumped on the phone straight away. “I called the owner and he said he had three blokes looking at it the next day,” Steven says. “So I went straight over and bought it there and then.” 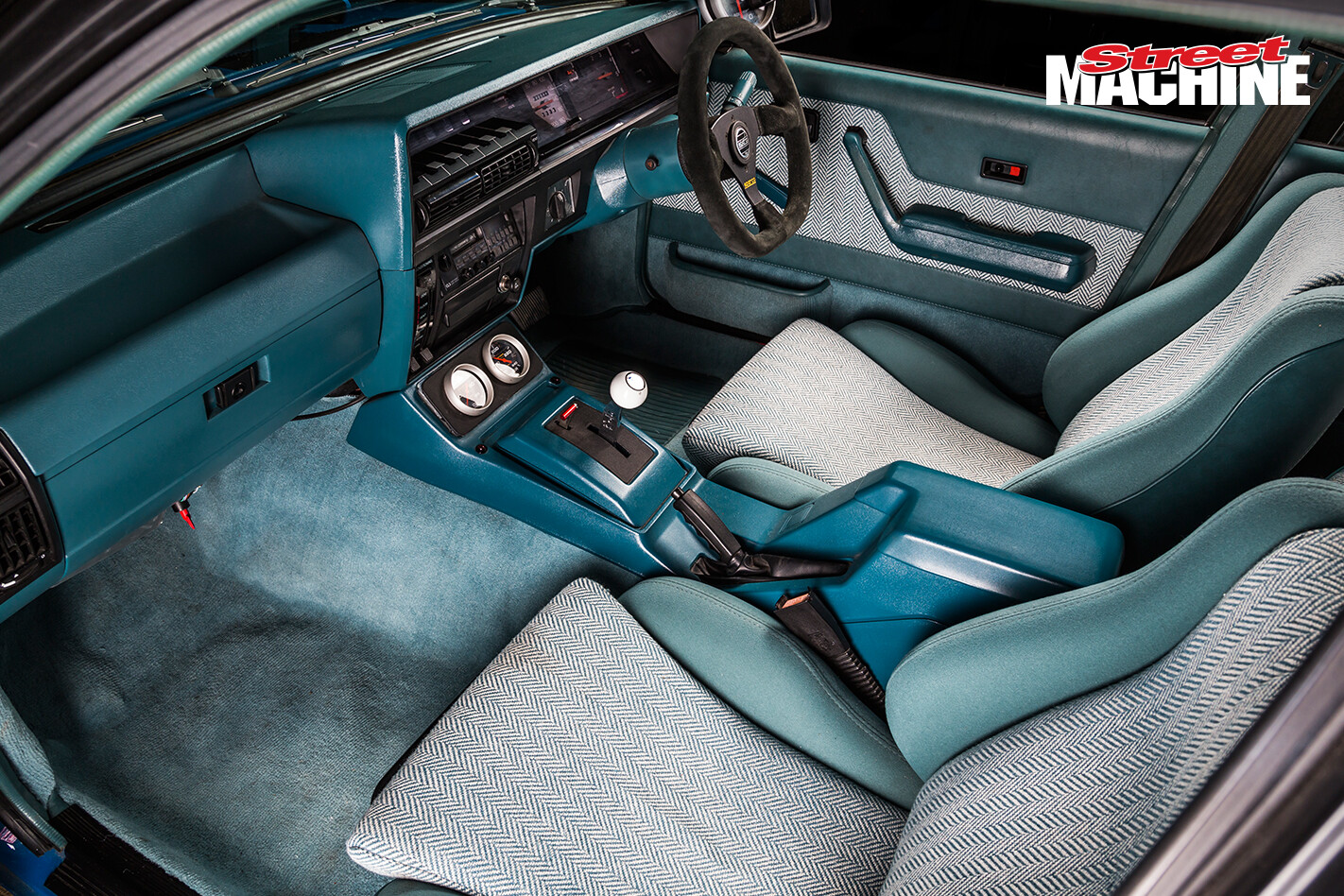 The car turned out to be better than he could have hoped. “It was mint,” he says. “When we did the interior and stripped it, it was the real deal – one-owner; still had all the plastic underneath.” Steven kept an eye out and started collecting bits and pieces as they became available to make it match his vision. “I got some good Scheel seats and herringbone trim on ‘evilbay’, and had Kon at Creative Auto Interiors do a full Group 3 re-trim,” Steven explains. 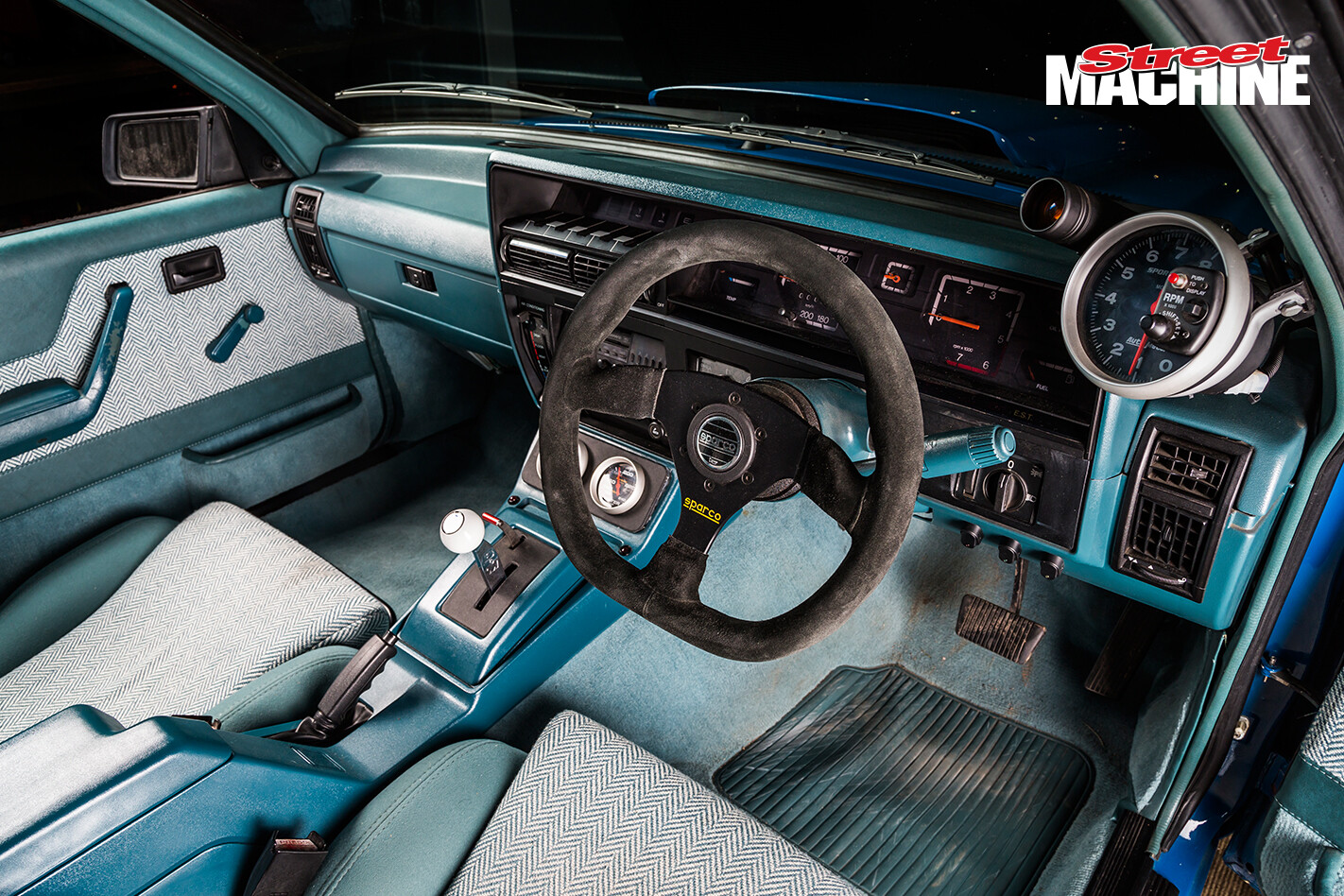 The process of giving the VK enough go to match the show was one of trial and error. The first engine build didn’t turn out real well. It cost a lot and the results were less than impressive. The second effort was better and netted a 600hp 355 stroker that, according to Steven, “went good and sounded mental”. 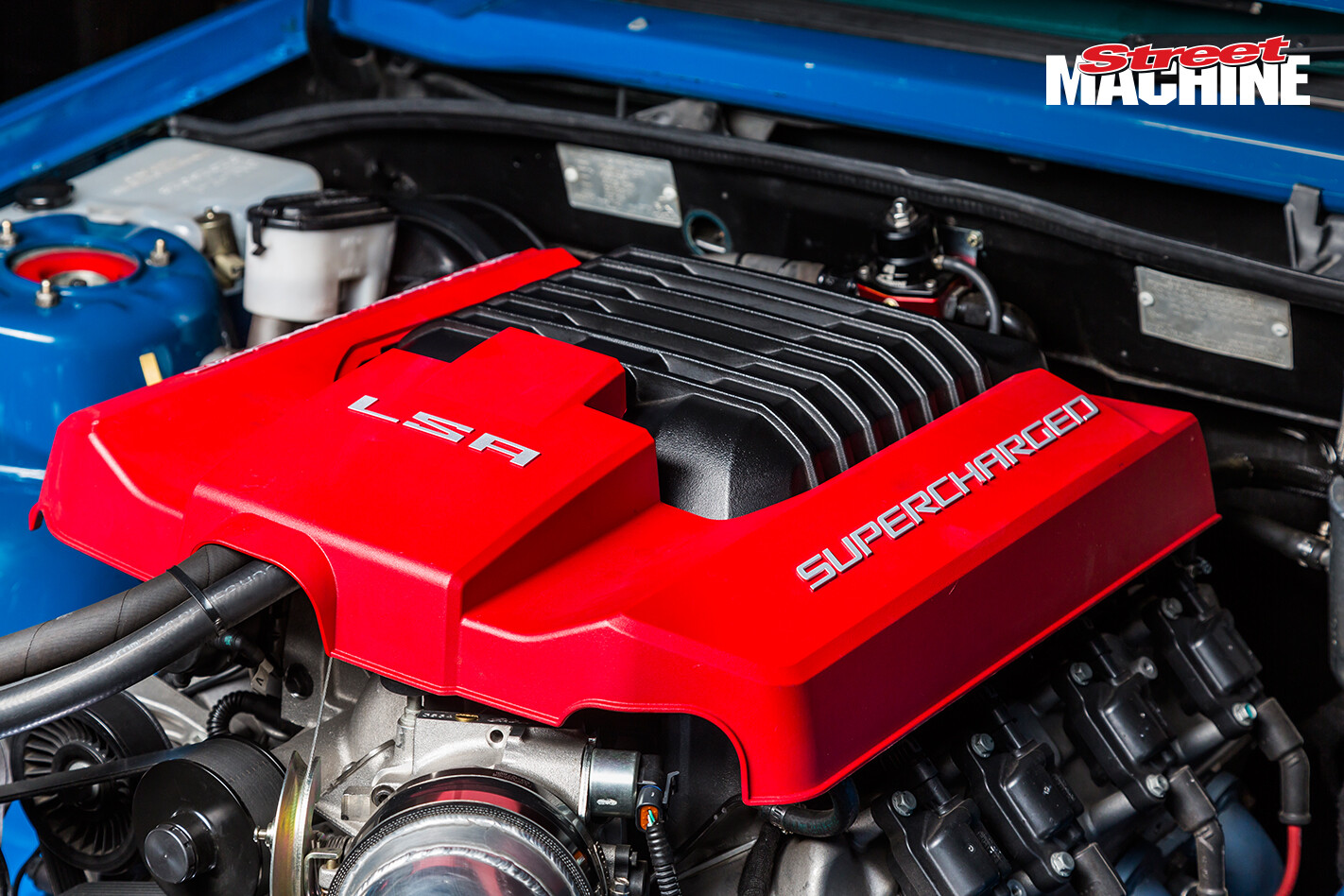 But then a fateful joyride in a supercharged late model Commodore changed his tastes forever. He was bitten hard by the high-tech forced induction bug, and over the next few months did some research and realised that it was a feasible conversion. 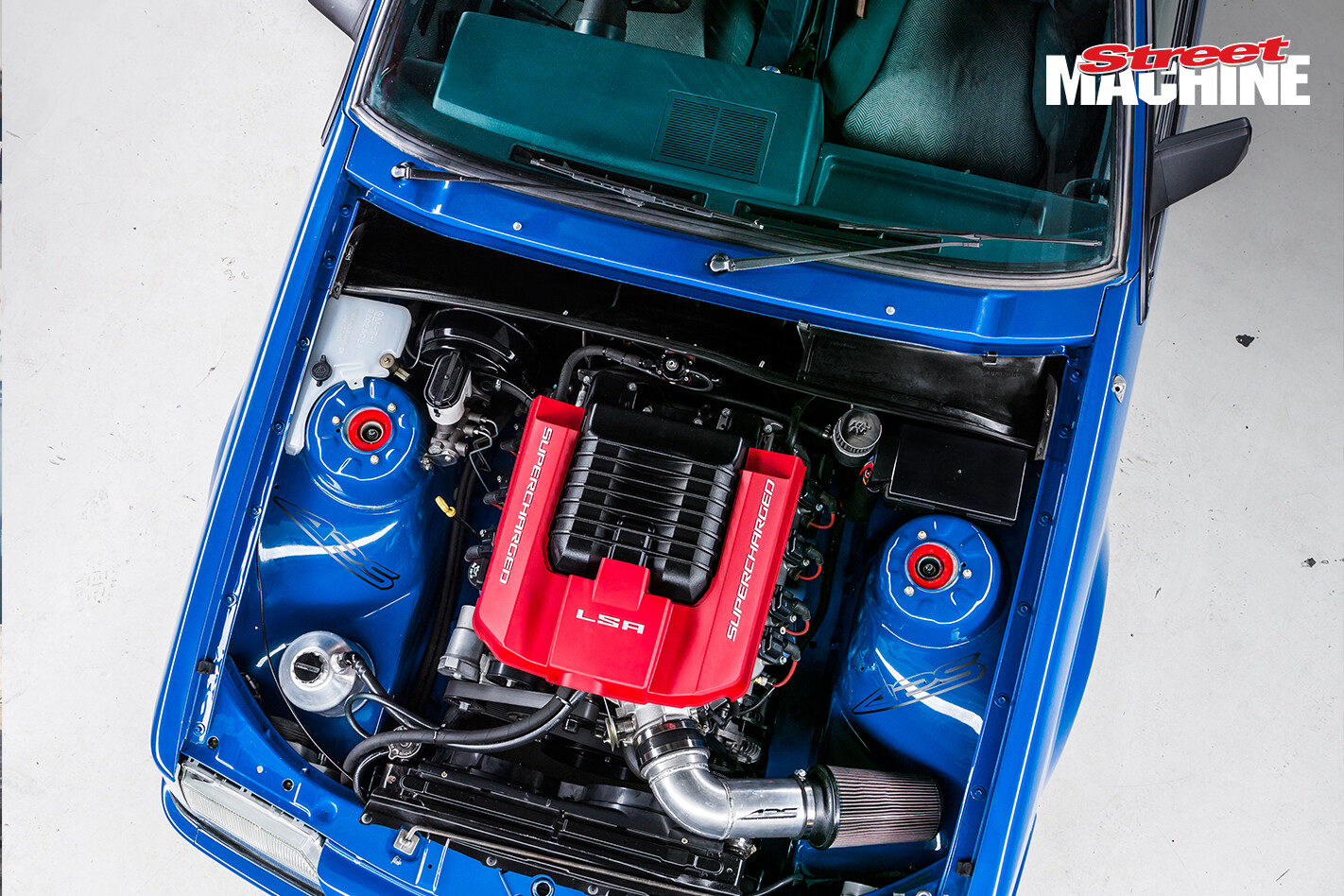 “I started seeing LSA crate engines coming up for sale cheap,” Steven says. “I’m a builder, and one of my mates who’s a mechanic said to me, ‘You build houses for a living – it’s not that hard!’ So I just did heaps of research and [the mechanical work] seemed pretty straightforward. So with the help of some good mates we sourced parts and put in the LSA in my garage at home.” According to Steven the conversion was pretty easy. “These days with a VK, everything is just a mouse-click away,” Steven says. “It’s all off-the-shelf, there’s not too much custom stuff needed.” 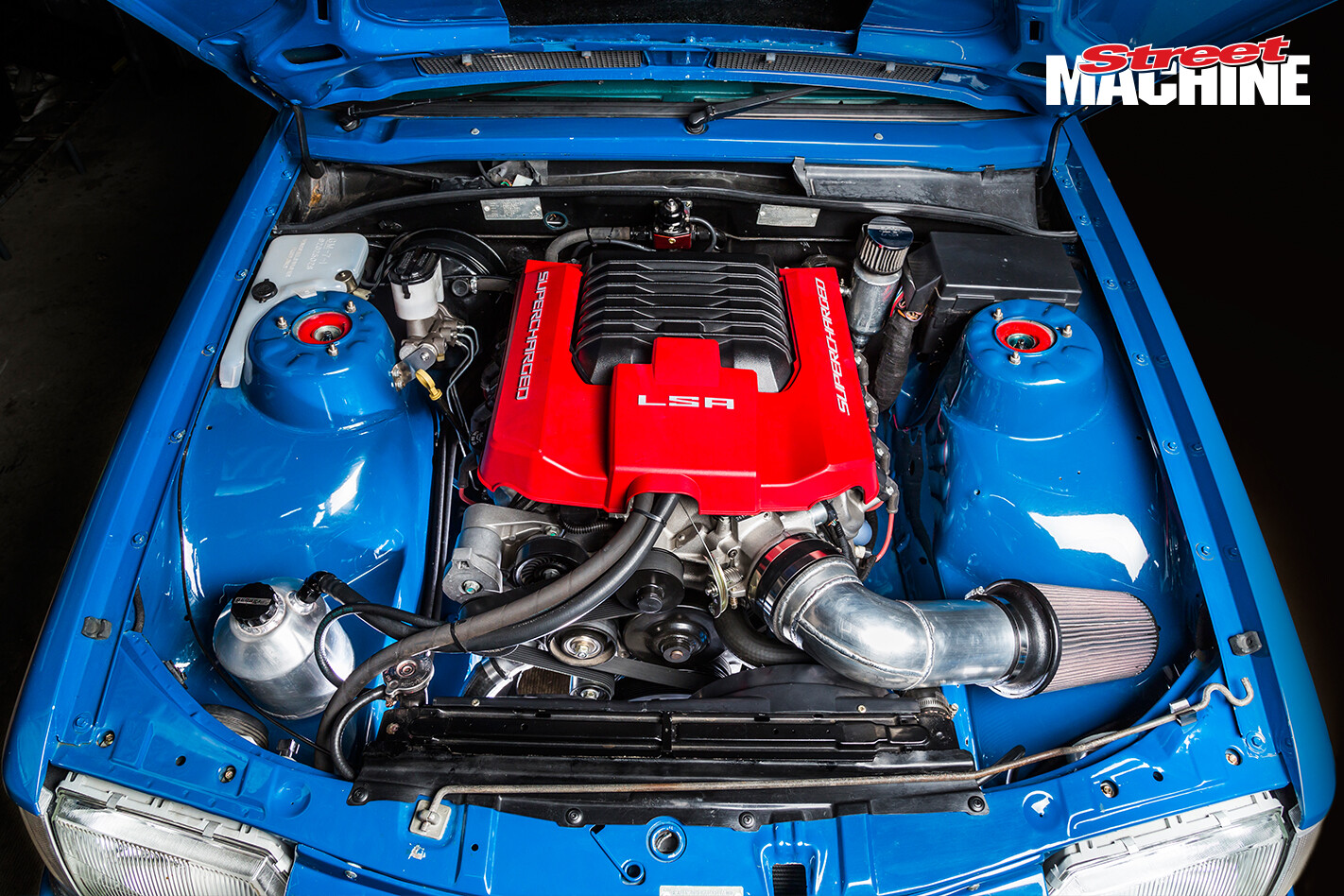 The engine mounts and the starter motor relocation kit are from Castlemaine Rod Shop and the stock fly-by-wire was replaced with a 92mm Edelbrock cable throttlebody. According to Steven, they’re a great replacement because they have a bleed screw and the LS engines are renowned for idle problems when you start to modify them. Steven also bought a brand new LS1 loom and computer from Holden and had good mate, Scott McCafferty from Custom Ignition Leads, wire it up. The fuel system is based on a boot-mounted Aeromotive stealth cell. “It’s got an in-built pump and surge tank and it’s designed for E85 fuel,” Steven says. 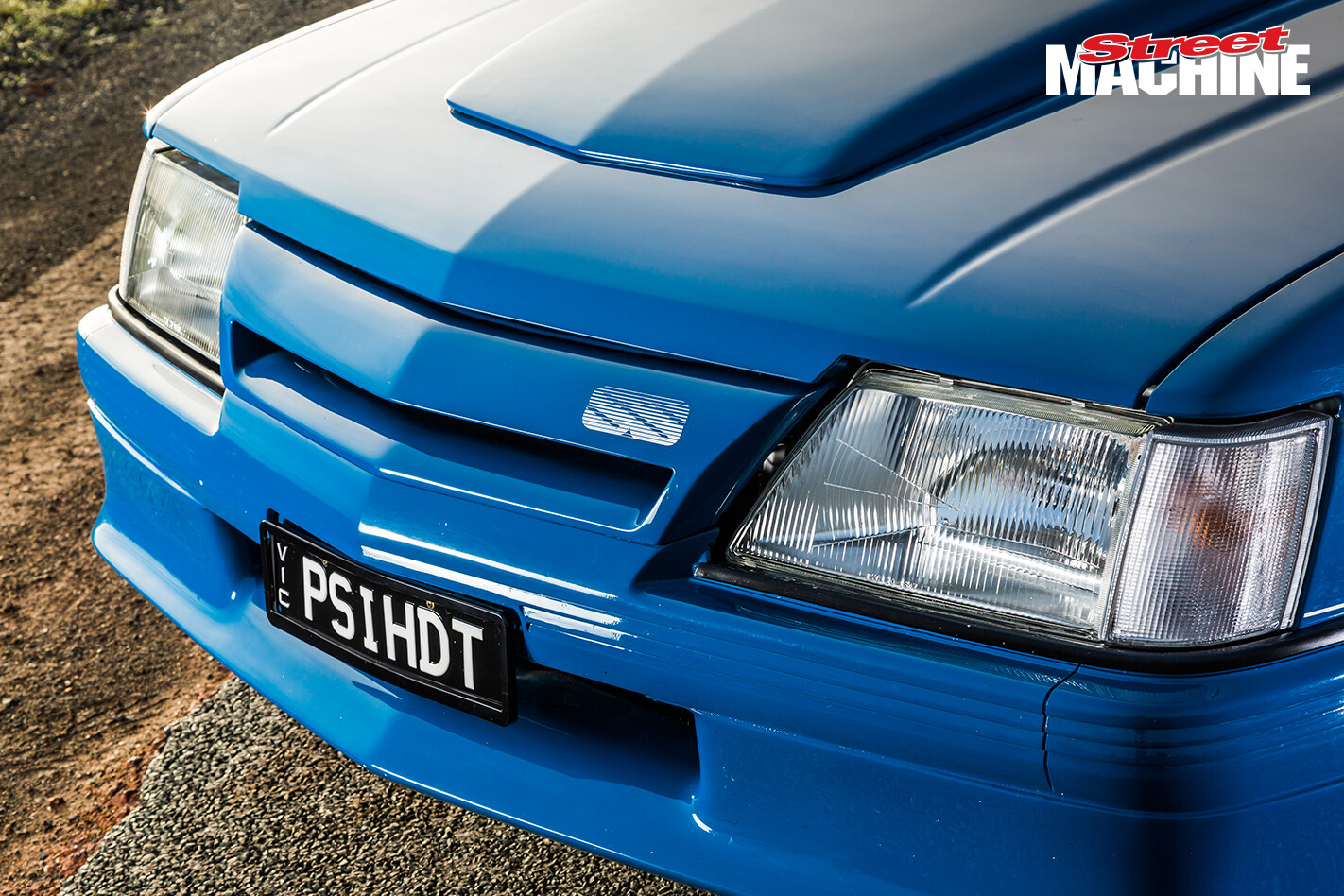 The pipes are off-the-shelf 15/8-inch Pacemaker tri-Ys, but Steven had another mate, Matt Galvin, modify them slightly, changing the secondaries from two-inch to 21/4-inch. “Matt also did all the fab work,” Steven says, “making the header tank, heat exchanger and inlet pipe, which came up a treat.” That alone would have been enough of an improvement for many, but Steven wanted more. He did more research on who would be best placed to make the new donk perform, and decided to partner with APS in Frankston. They treated the 6.2-litre LSA to a Howards cam and springs, 12psi boost pulley and E85 fuel-system upgrade. Steven was understandably happy with the results. 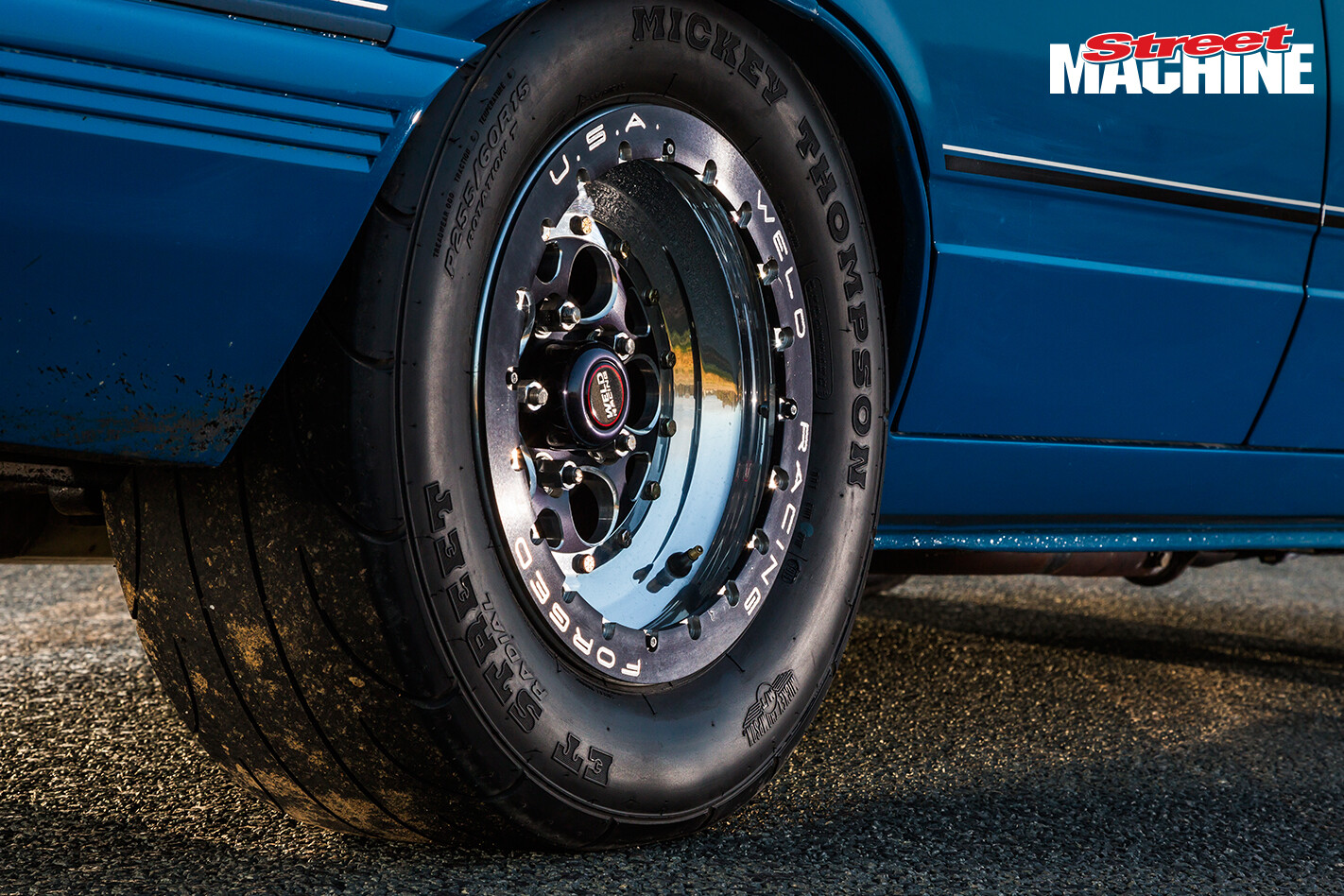 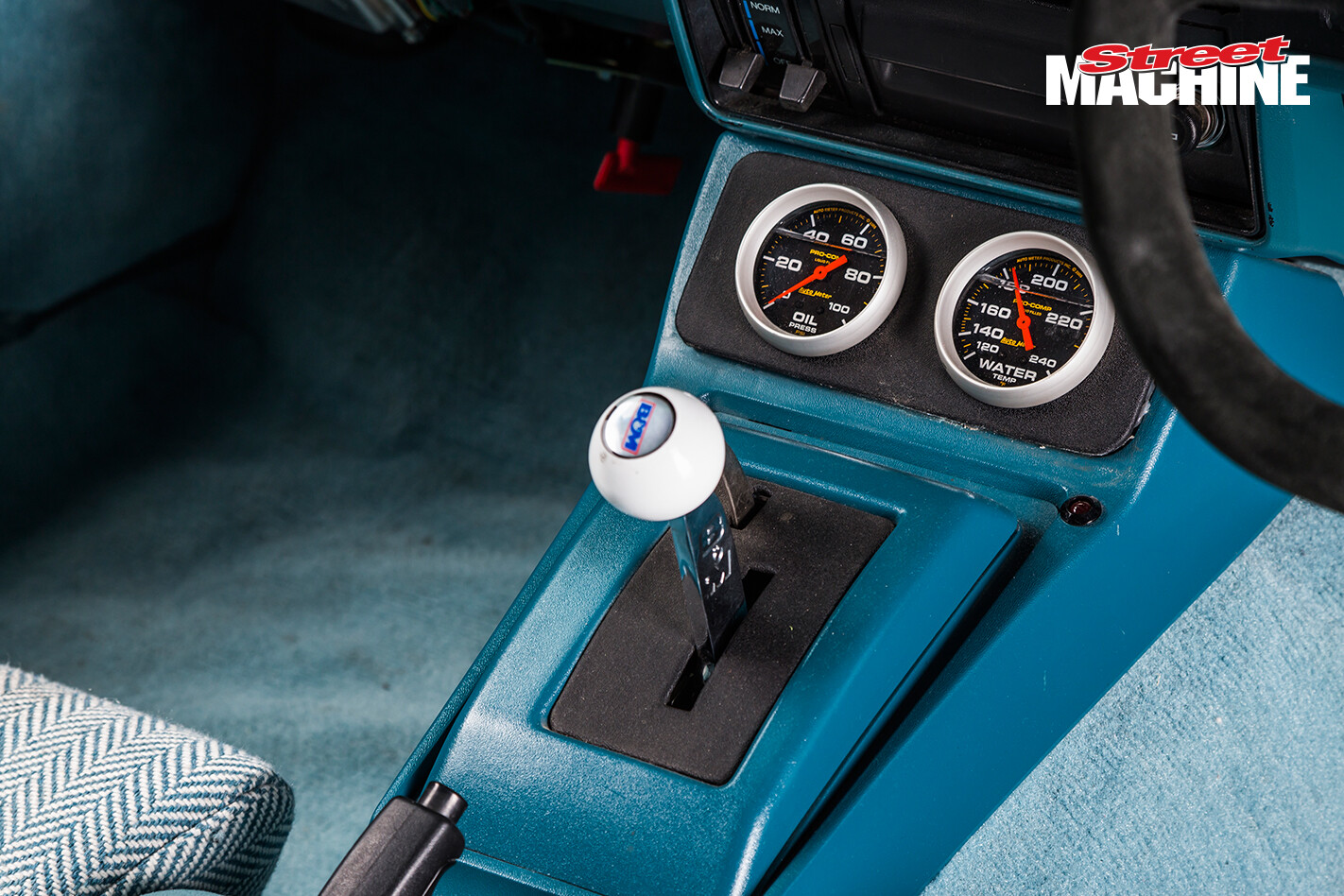 The high-tech mill is backed by an old-school Powerglide built by Grant Hobday at Bayswater Automatics. The two-speed slushbox runs a TCE 3500 stall converter and feeds power through a custom two-piece tailshaft to the 3.5:1 ratio nine-inch out back. In line with Steven’s street and strip tendencies, the VK runs a set of Weld Magnum Pro rims – 17x4.5 inches at the front and 15x8 inches out back. They’re wrapped in a set of super sticky Mickey Thompsons to ensure maximum grip off the line. 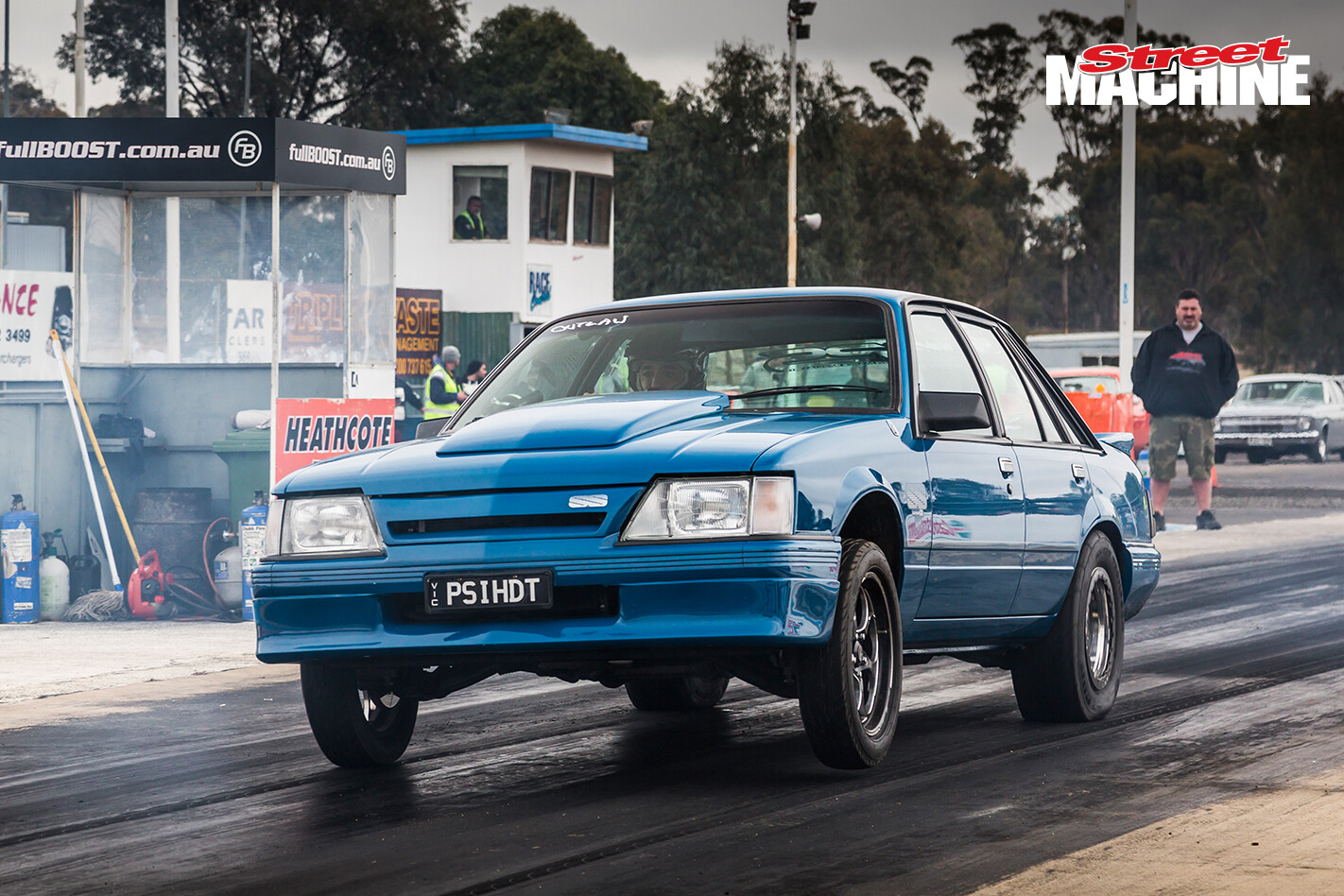 So where to from here? “We’re playing with suspension at the moment to try and get the 60-foot down,” Steven says. “In the last couple of cooler months, we put a bit more of an aggressive tune in her and after getting used to the car, we managed to run a 9.58-second ET at 148mph with a soft 1.50-second 60-foot.” The current best ET for the car is 9.49. "Eventually I want to give it a little shot of gas and see what happens.” He laughs as he says this, knowing full well how much ridiculous fun that is going to be.