A QUICK glance at Dale Jeffrey’s Torana doesn’t give you any clues that there are 700 horses hiding under the bonnet. Even the reverse-cowl scoop doesn’t draw your attention; after all, these were standard fitment on A9X Toranas and the stretched version from Alfa Motorsport Fibreglass looks right at home on the blacked-out bonnet. With its factory-style Satin Mist paint and SL/R 5000 blackouts, you could easily think it’s just a tidy Torana with a nice set of wheels on it. But if that was the case, we probably wouldn’t be featuring it in Street Machine. 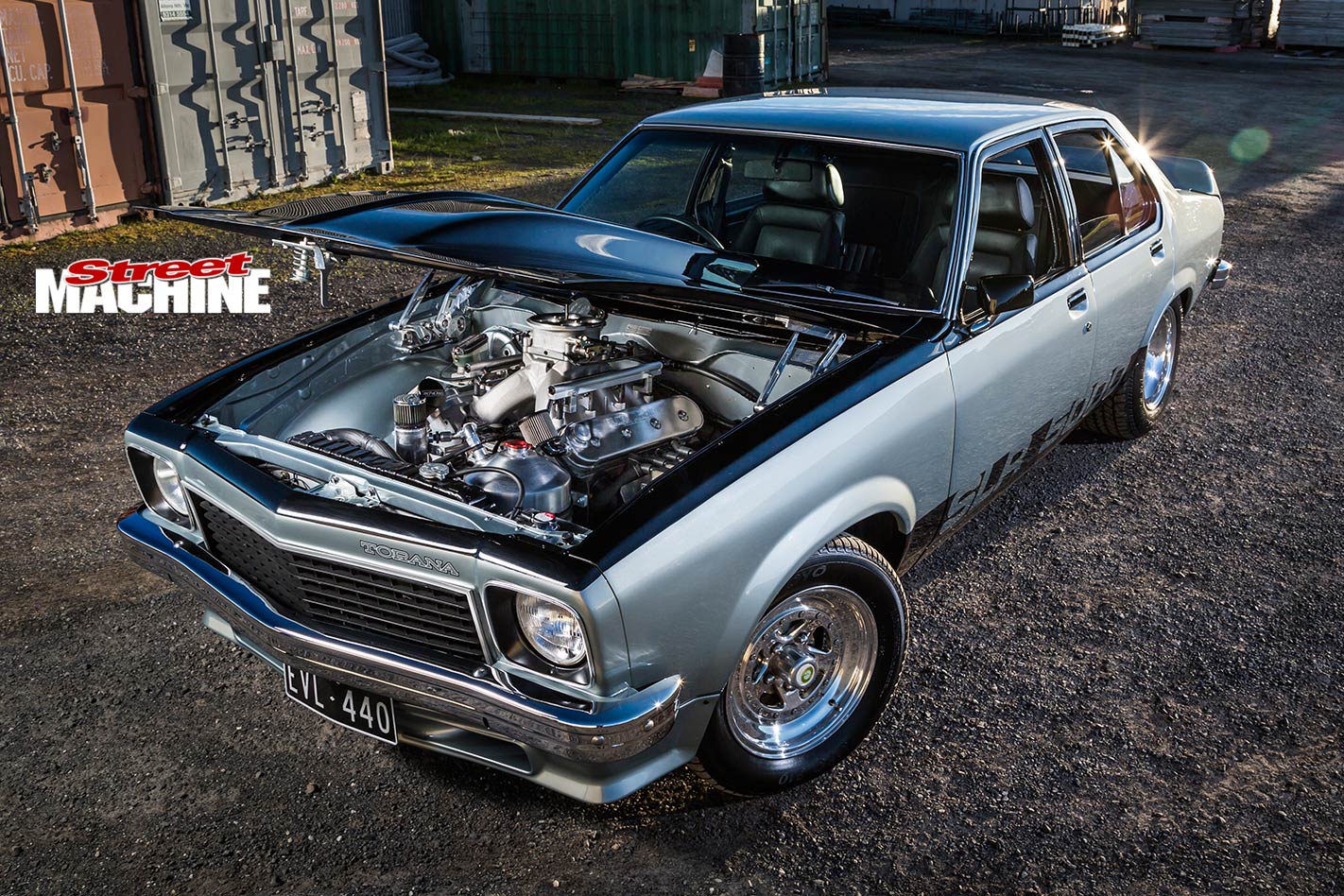 Nope, there’s a little bit of something special hiding under the bonnet in the form of a 440ci LS-based monster that Dale bought off someone who figured a house renovation was more important than going really fast. Clearly that guy isn’t aware that you can’t race a house! His loss was Dale’s gain, as he picked up an LSX long block for $11,000 – delivered. 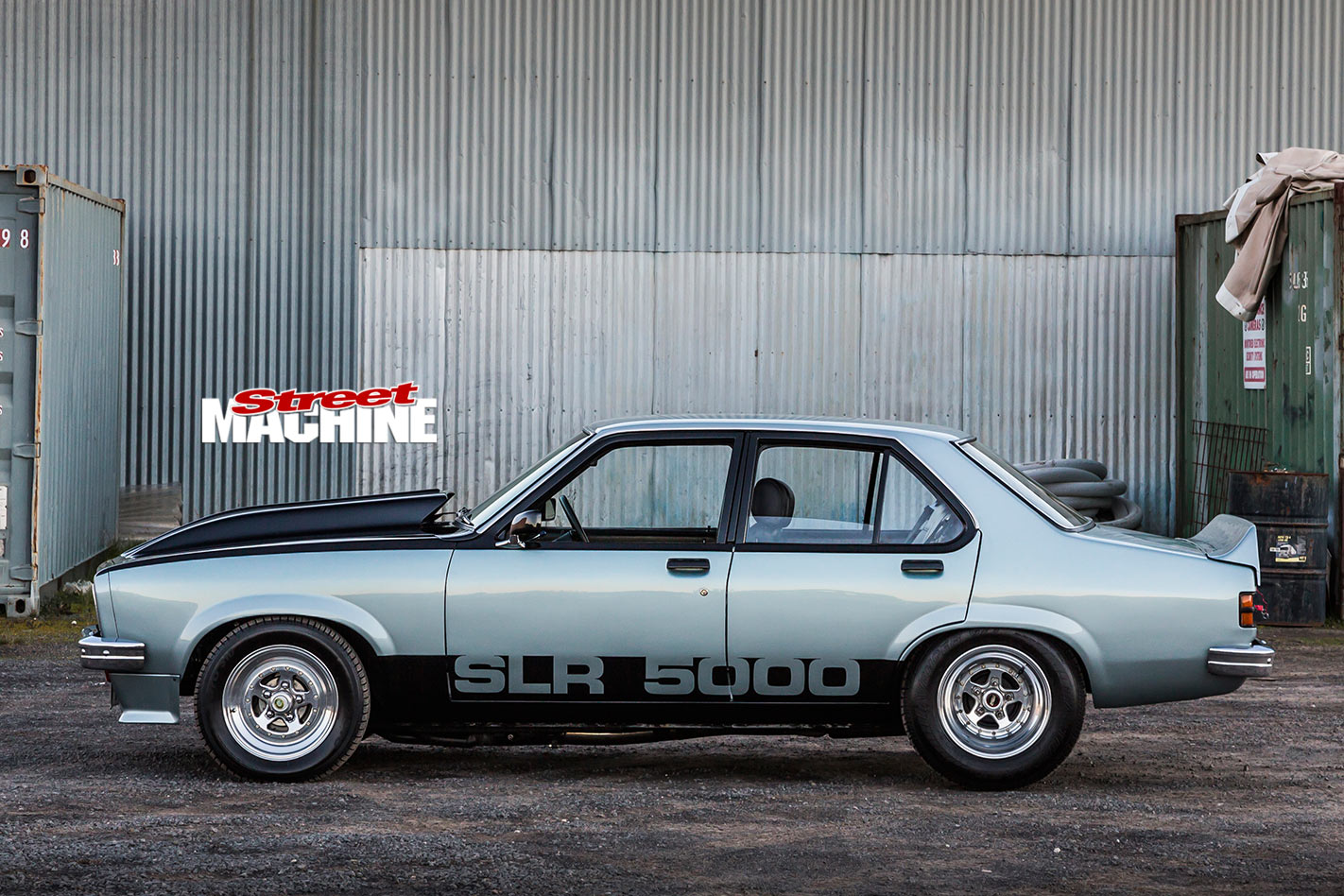 Dale bought the car with the paint and bodywork already done, and six years or so later the Satin Mist is still looking as good as ever

What he got for his hard-earned coin came with a pretty impressive parts list. It starts off with a GM Motorsport LSX block with a Callies 4.125in stroker crank, Callies H-beam rods and a set of JE forged pistons. The heads are also from GM Motorsport – CNC-ported LS3 units to make the best use of the big Comp Cams solid-roller that measures up at 780thou lift and 272/278@0.050 duration. Keeping those valves controlled is a Jesel Pro Series shaft-mounted roller-rocker set – all top-notch stuff. 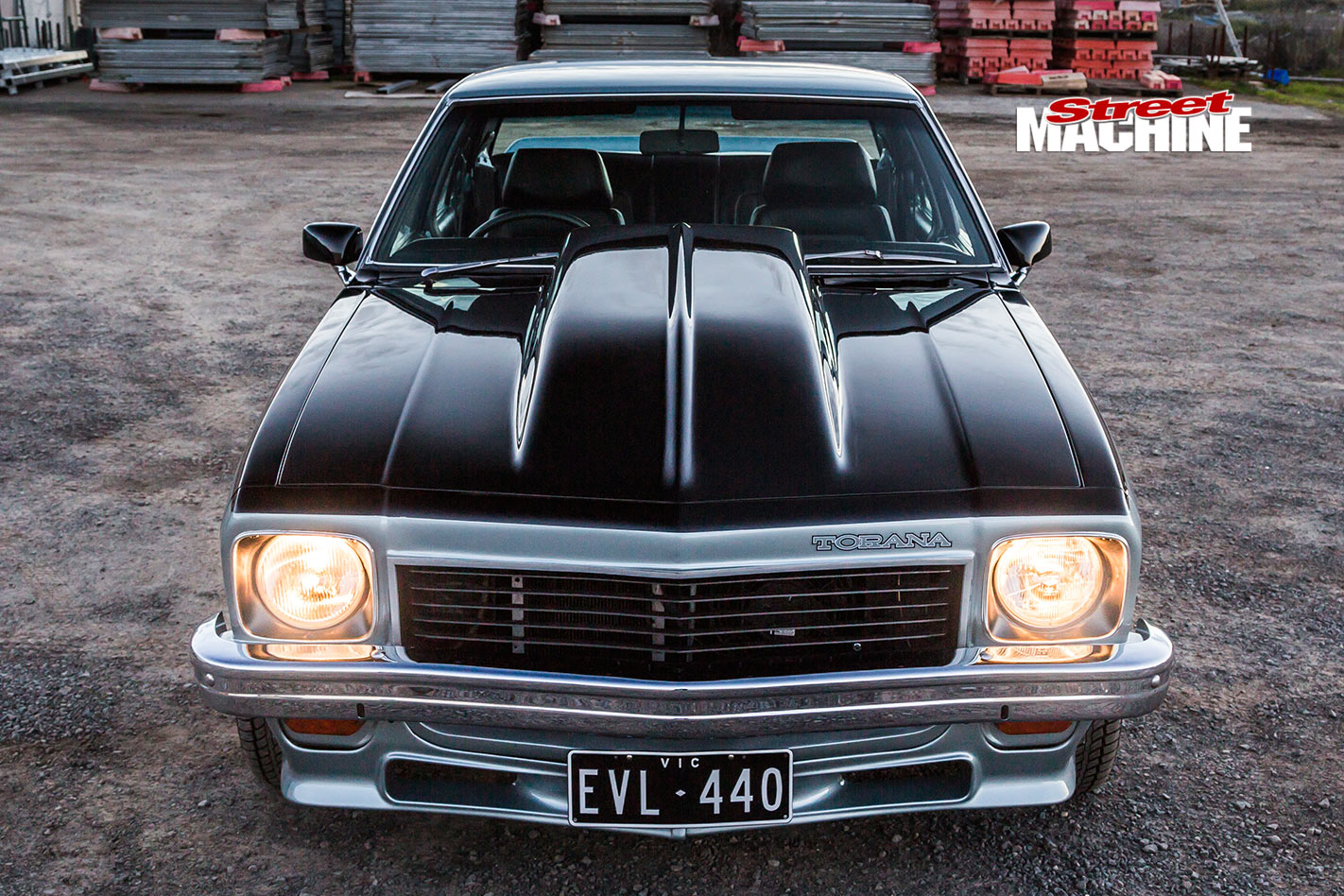 The engine had originally been purchased to put into a VZ SS Thunder ute that Dale had previously built up with a Vortech V2 T-Trim supercharger that made 650hp at the tyres. The LSX was going to be a step up with a GT48 turbo hanging off the side. He then considered stuffing it into a VE ClubSport R8 wagon, but came to the conclusion that it would probably be a little bit too wild and wreck a perfectly good car. 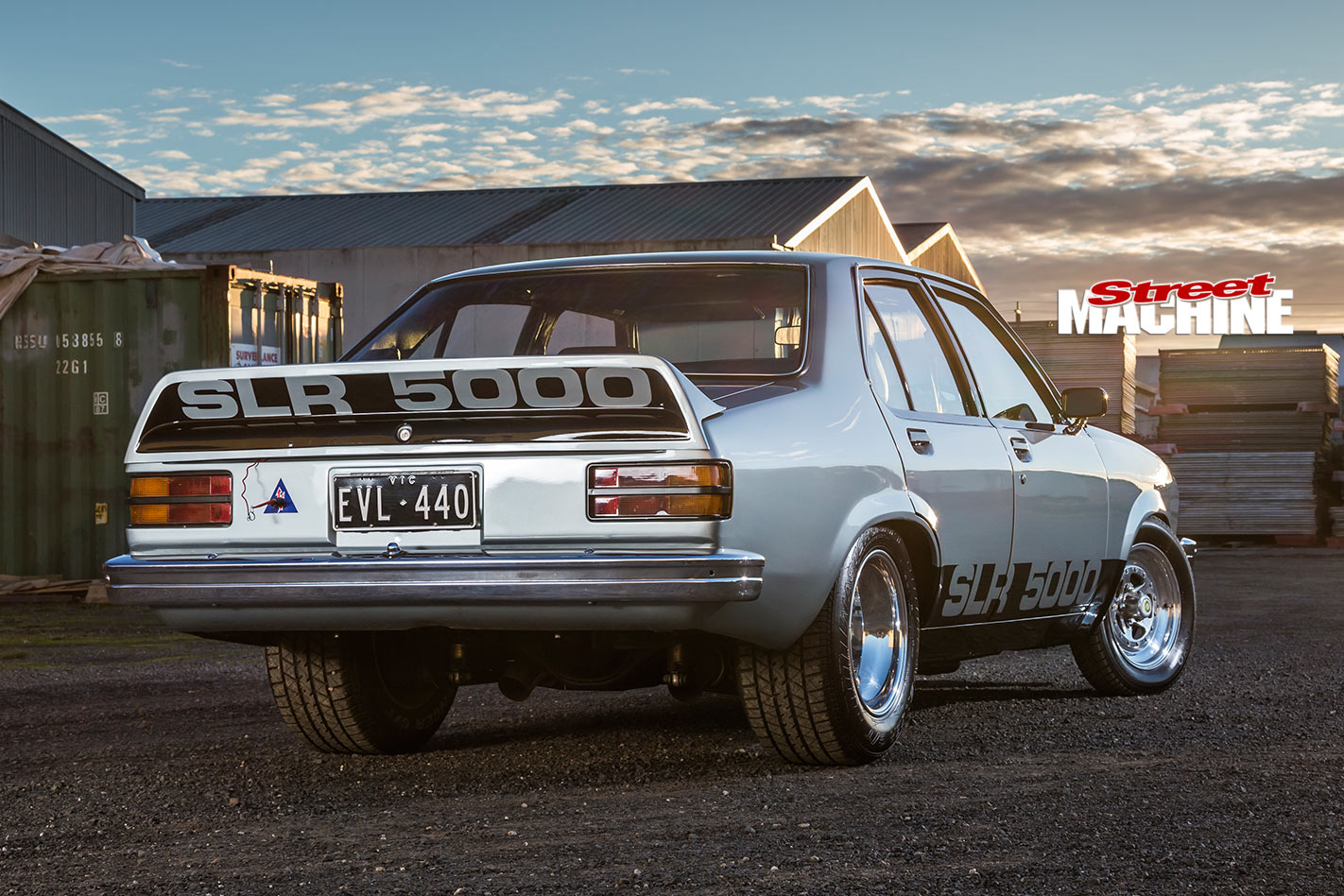 In the end, Dale returned to his roots and his love for Toranas. “I found the Torana at Prestige Motors in Sydney when I was flicking through the internet,” Dale says. “After owning three previous Toranas – an SS hatchback, LH four-door and an LX four-door – it caught my eye. It already had an LS1 in it, so I thought: ‘Beauty, I’ll put the 440 in that.” 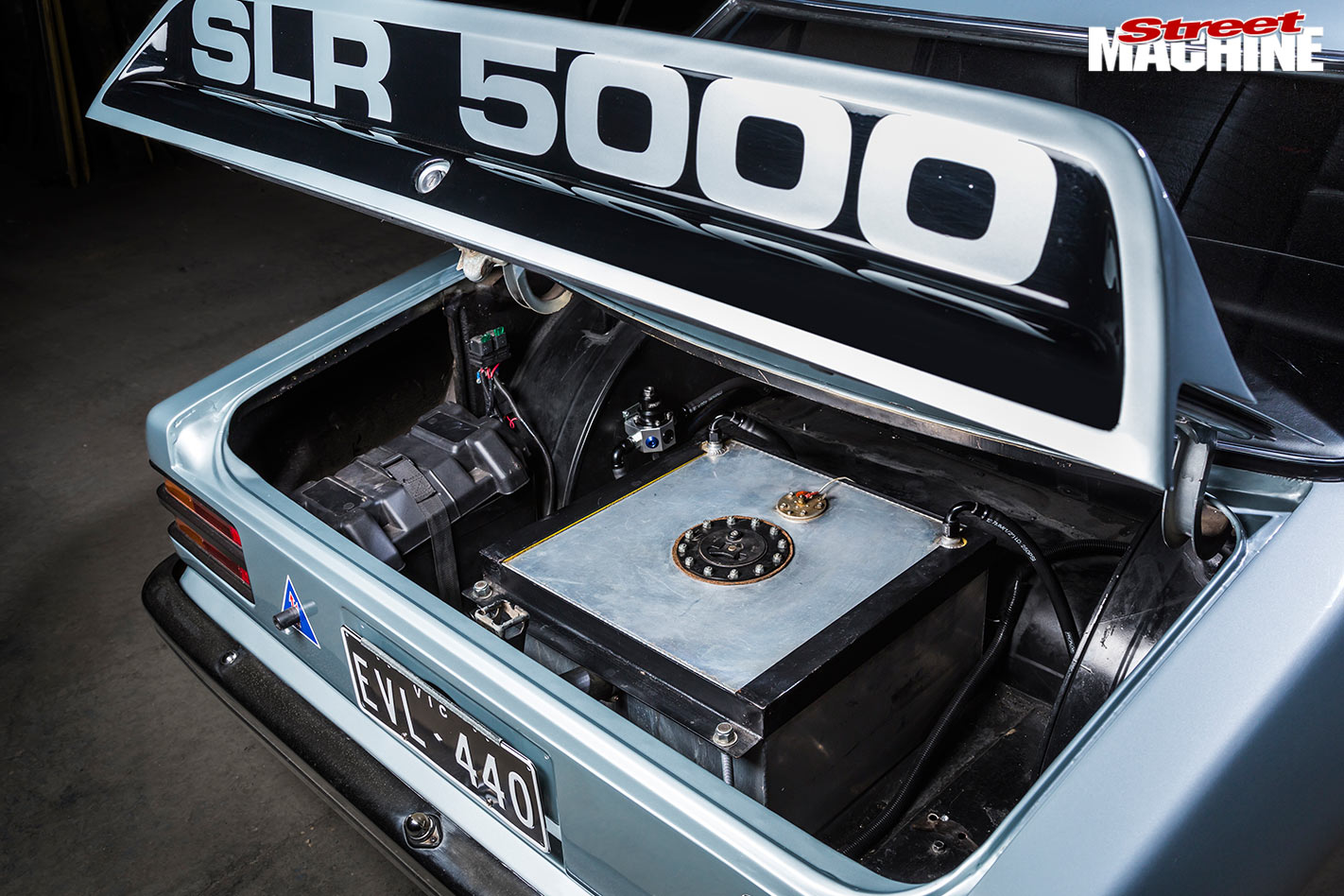 No drop tank for this SL/R, instead there’s a fuel cell keeping company with the battery and tubs

Dale headed up to Sydney to check the car out, took it for one drive and fell in love with it. It was shipped down to Melbourne and Dale enjoyed three whole months of happy cruising – then he pulled the motor and ’box out. Don’t worry, there was nothing wrong with it, he was just itching to get that big-inch LSX bolted in place of the stocker LS1. 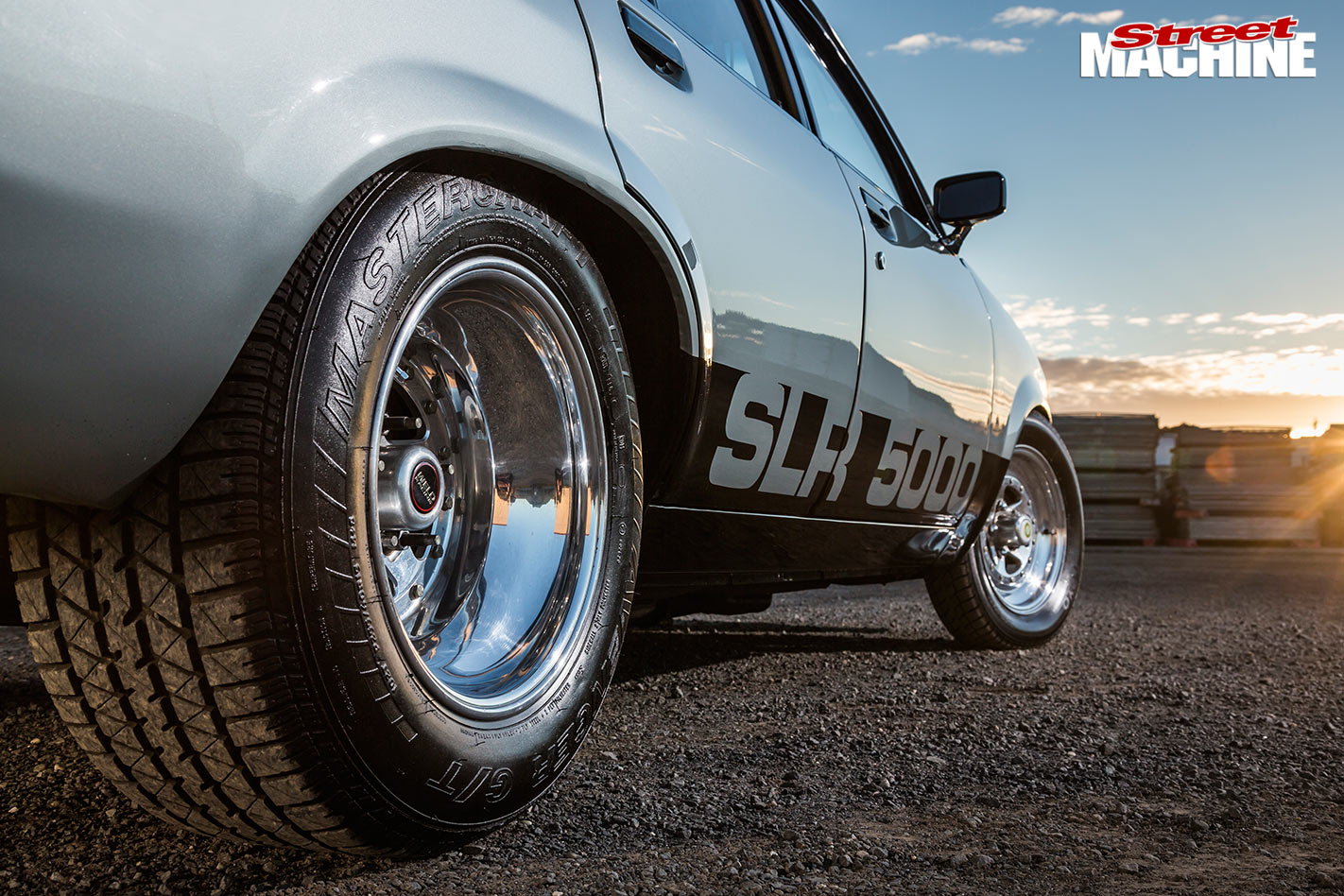 Even without a set of flares, there’s no problem slotting the 255/65/15 tyres under the back thanks to the tubs

You might think it would be a pretty straightforward job, simply unbolting one engine and slotting in a new one, but things are never that simple – not when you’re messing with a modified car. Dale also wanted to change a few things and tidy up the engine bay a bit, as the previous installation essentially involved an engine that had been plucked out of a Commodore and dropped straight into the Torry – there wasn’t any effort spent on de-uglying the LS1. But as you can see from the pics, this time Dale went to a lot of effort to create one of the nicest-looking LS swaps you’ll ever see. 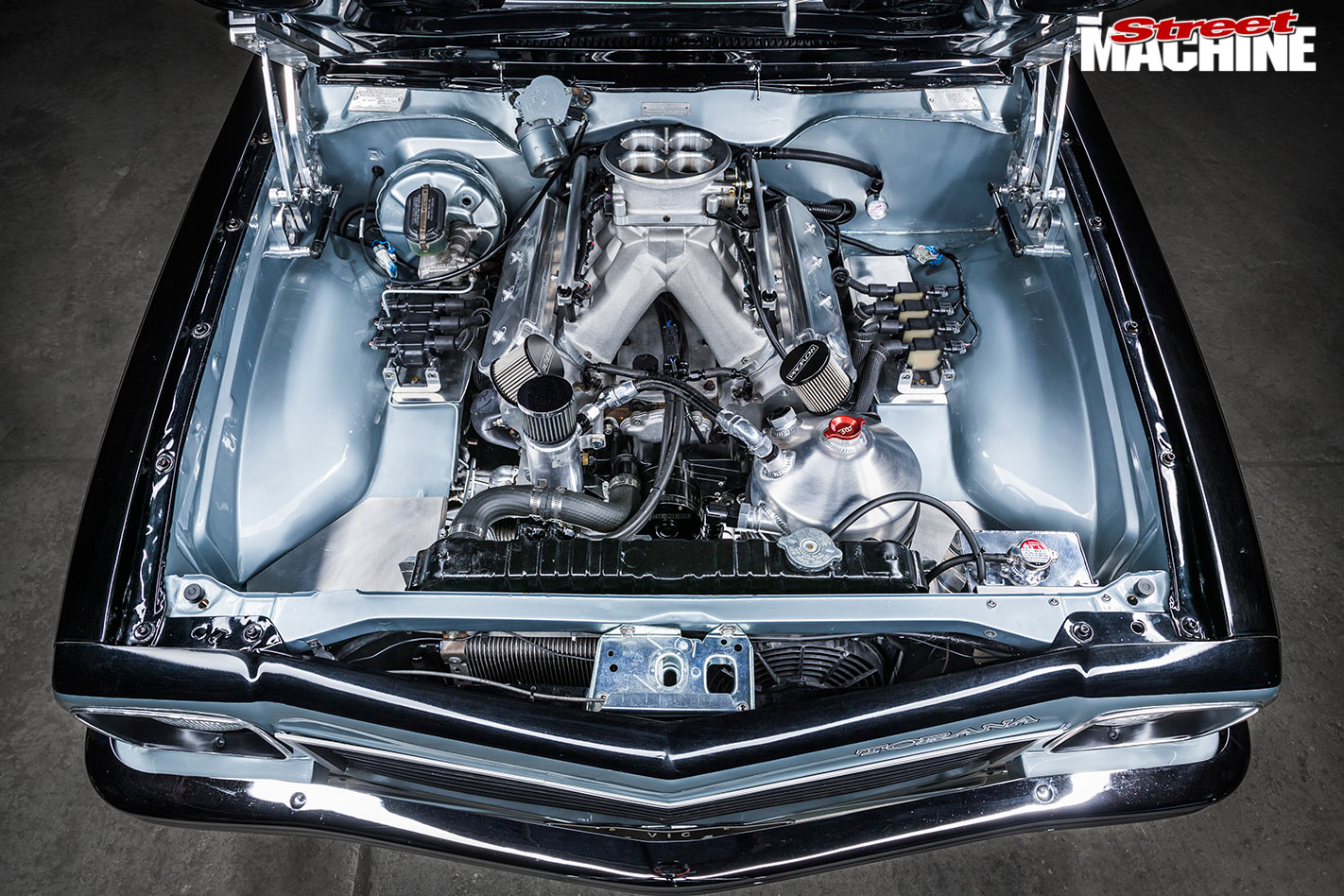 A massive improvement to the looks of an LS is easily achieved by relocating the coil packs and installing some flash billet rocker covers. To keep everything under the 4in reverse-cowl, Dale opted for a Mast Motorsports intake topped by an Edelbrock 2000cfm throttlebody. It’s thoroughly modern, but with a tough-as-nails old-school look

But it wasn’t all plain sailing with the new combo; Dale had a bit of grief with it early on in the piece. Initially a 434-cuber, the change from twin-turbo to naturally aspirated meant a new set of pistons and a bump in compression, which also pushed the capacity out to 440 cubes. 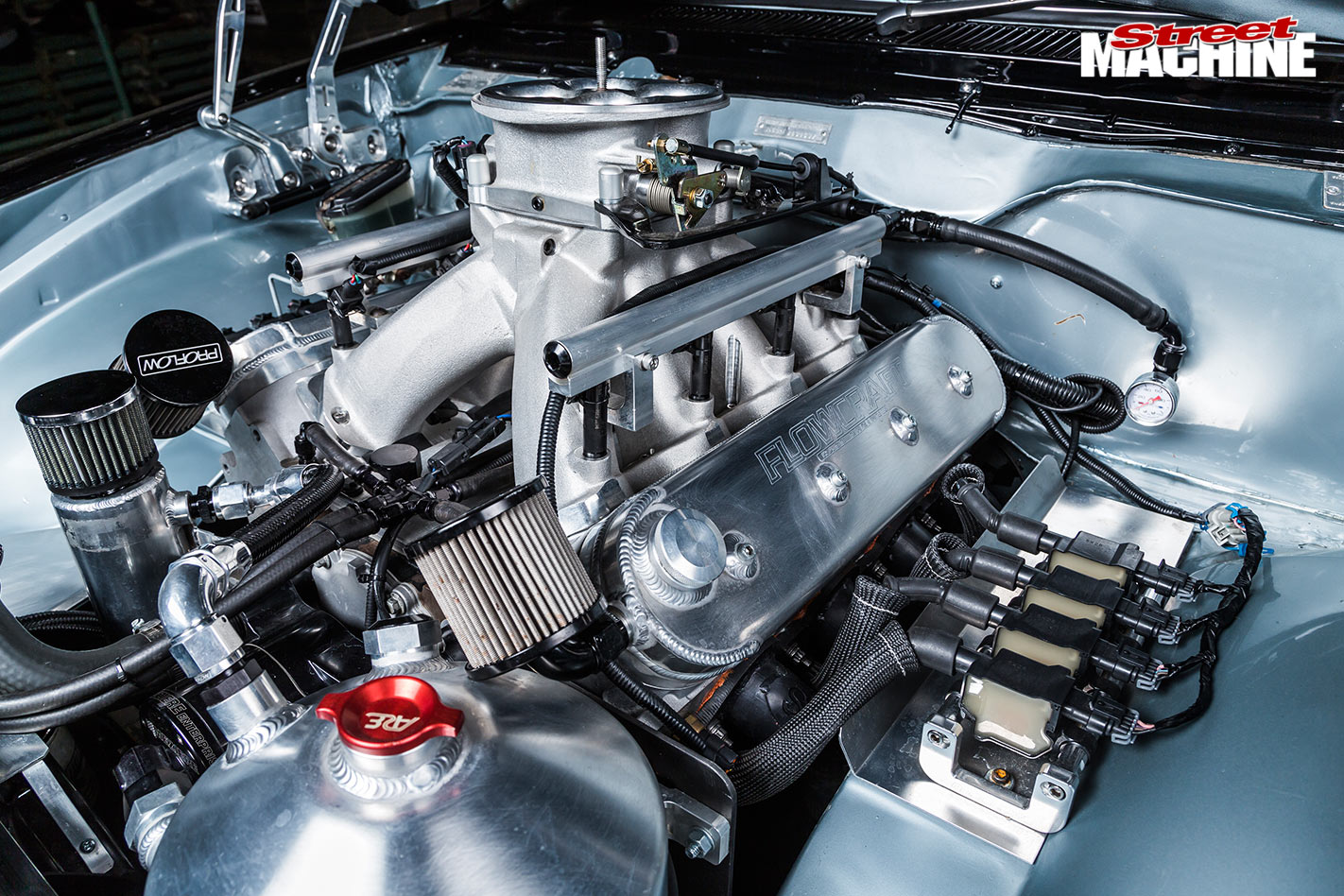 You’ve probably also spotted that giant oil tank for the ARE dry sump system. As well as much better oil control, it also helps get the motor nice and low and under the 4in cow

“I sent the motor to Top Torque to get built and then it went to Scott Cook to go on the engine dyno. We did six runs and it bent a pushrod as it only had a standard oil pump, so we fixed the pushrod and that’s when I decided to go to a dry sump from ARE,” Dale says. 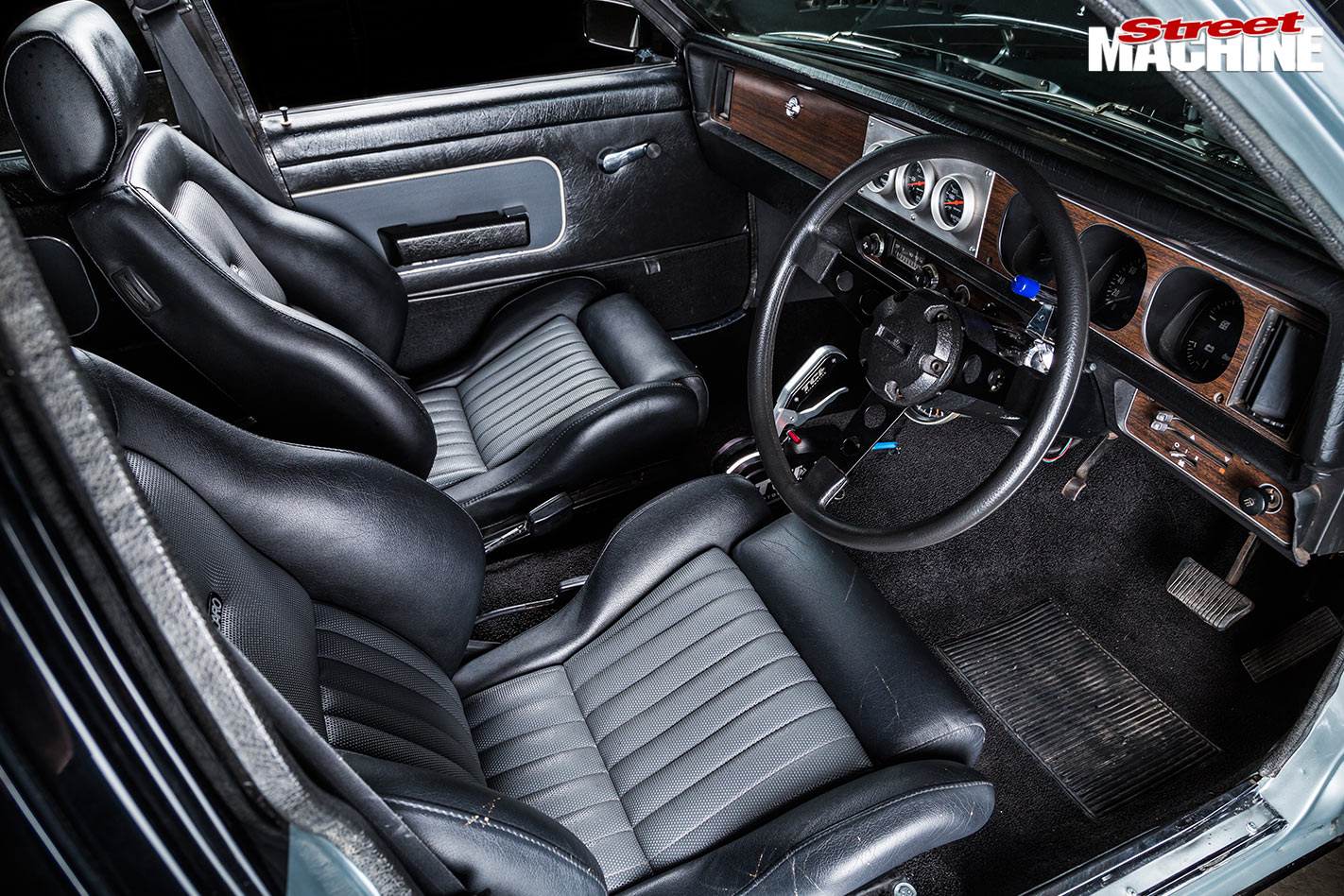 The engine then went back on the dyno fitted with a Holley Hi-Ram intake and 102mm throttlebody and pumped out an impressive 701hp on 98-octane pump fuel. Even more impressive was the torque: “The engine made 500lb-ft at 3000rpm and kept climbing to 595lb-ft. It’s got so much torque and pulls like a freight train,”
Dale says. 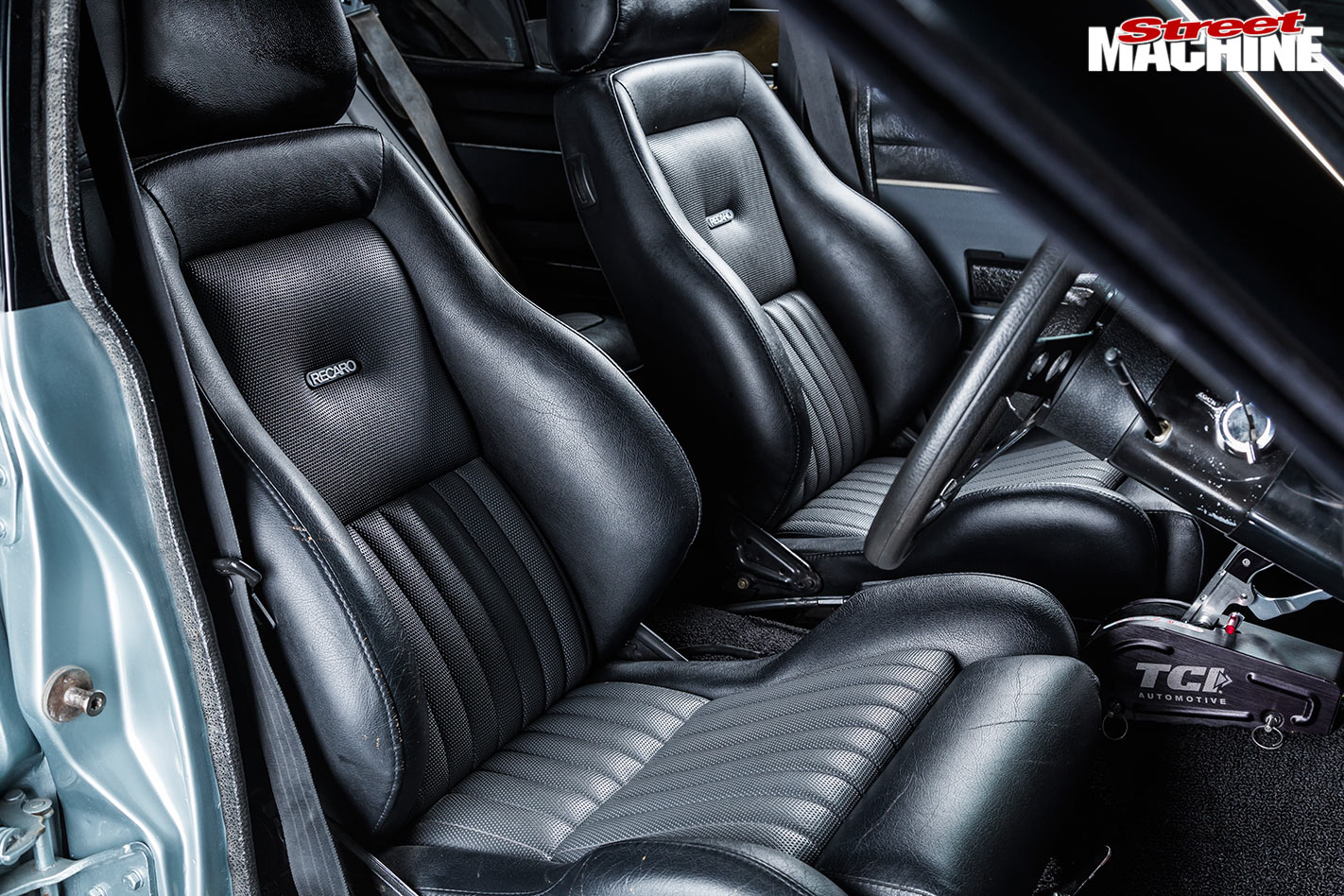 While the Holley intake obviously worked a treat, the overall height was a bit much for what Dale had planned. “I didn’t want to run a six-inch reverse-cowl; I wanted to run a four-inch,” he says. “So to keep it all under we had to source another intake set-up, and I’m glad I did, because I made a lot more ponies out of doing it.” 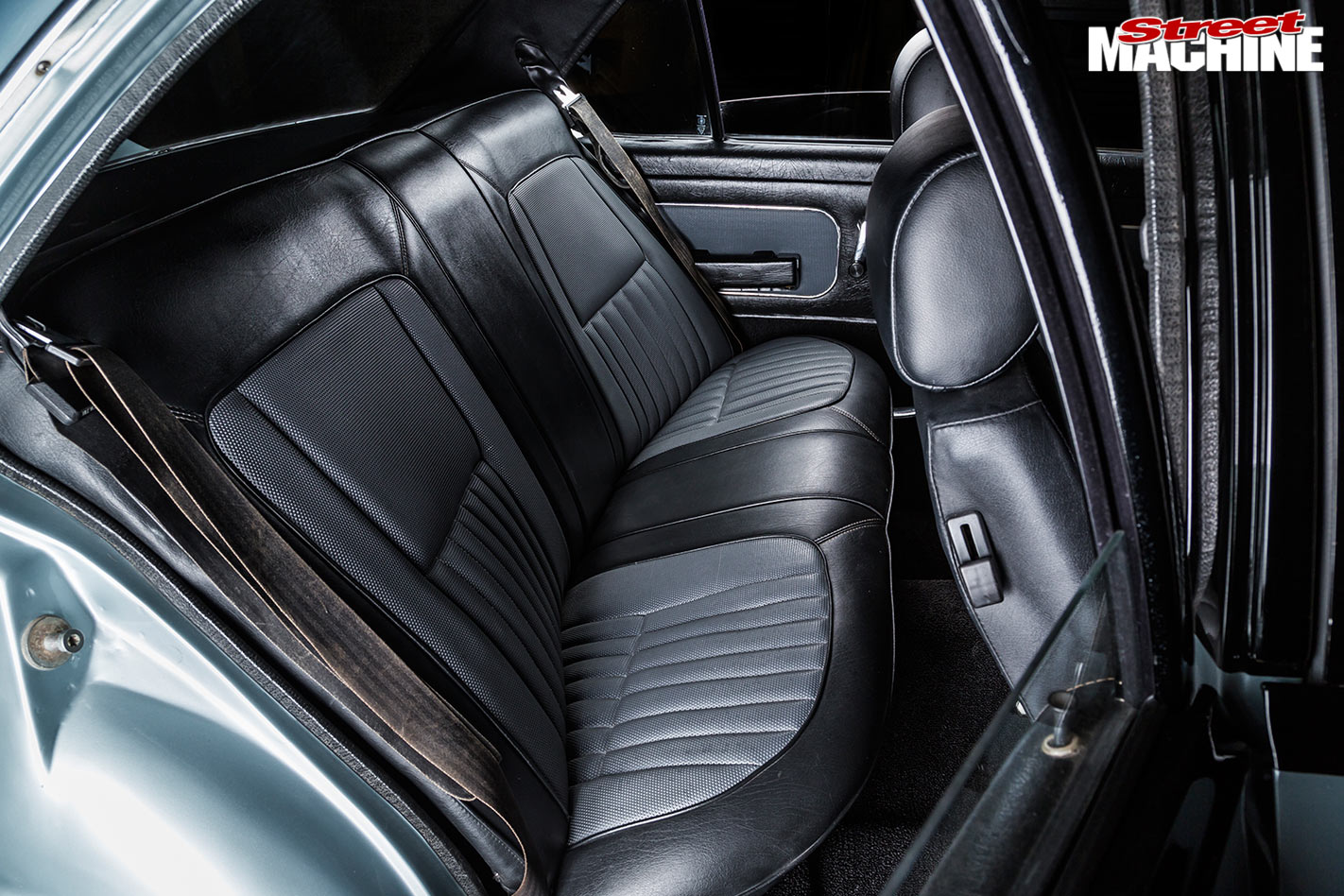 To solve the problem Dale jumped on the Mast Motorsports website and selected a two-piece, internally CNC-ported 4500 Series manifold. To top the big single-plane intake, Dale sourced an Edelbrock 2000cfm throttlebody that has four two-inch venturis. In case you were wondering – as I was – if there was any difference in the surface area of the 102mm throttlebody versus the four-barrel version, it’s very slight. 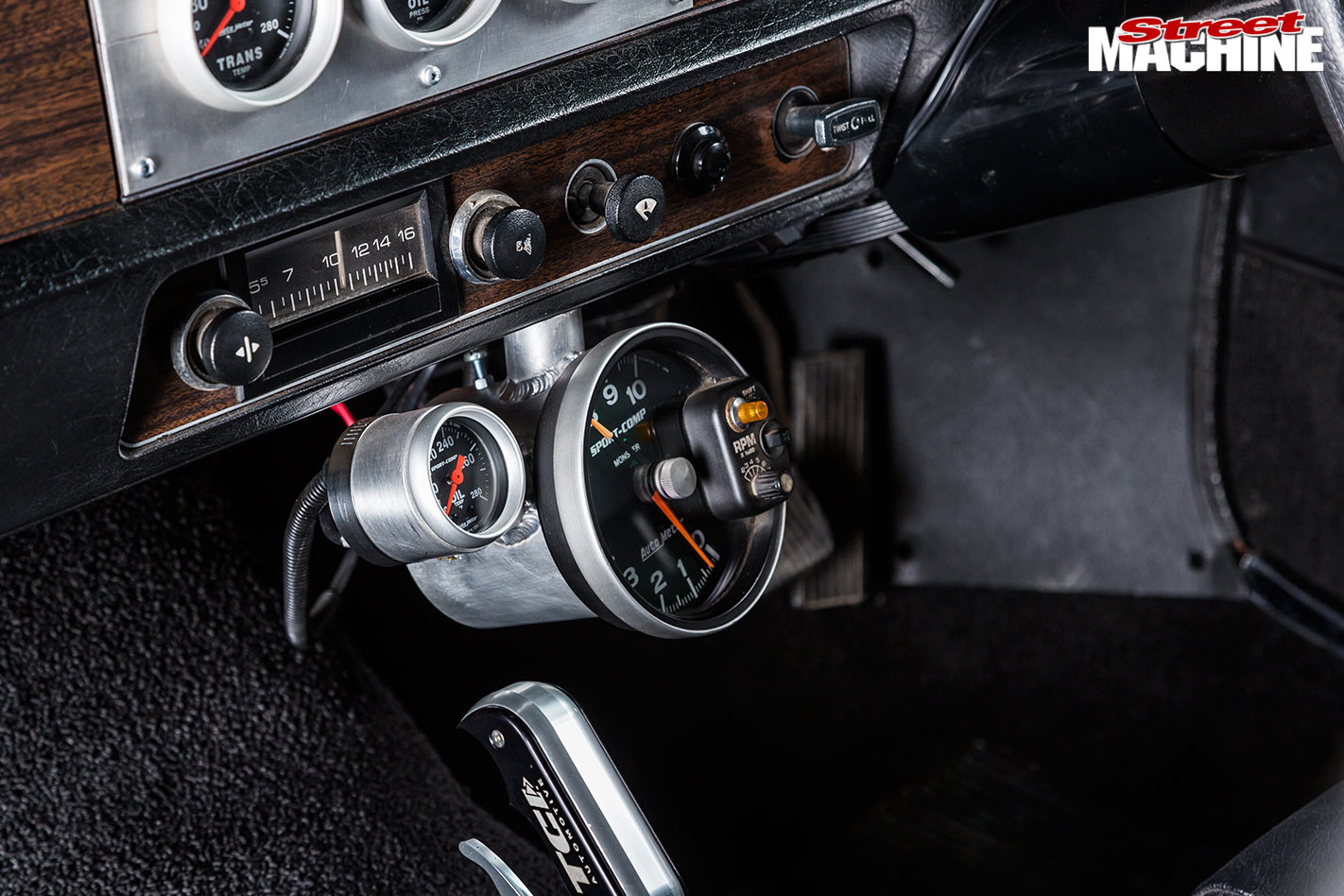 With everything buttoned up and tucked under the bonnet, it was almost ‘job done’, but there were still a few gremlins that needed to get sorted. On its first test drive the gearbox didn’t seem right and it turned out to be an oversized spring in the transbrake circuit. After that the rear main seal wanted to take a leak and there was a small drama with a trans fluid fire while dyno tuning. Thankfully there was no major damage, and the car then went to a hub dyno, where it made over 600hp at the hubs!

Yep, it might look like a sweet little SL/R 5000, but it’s definitely got some evil lurking beneath. 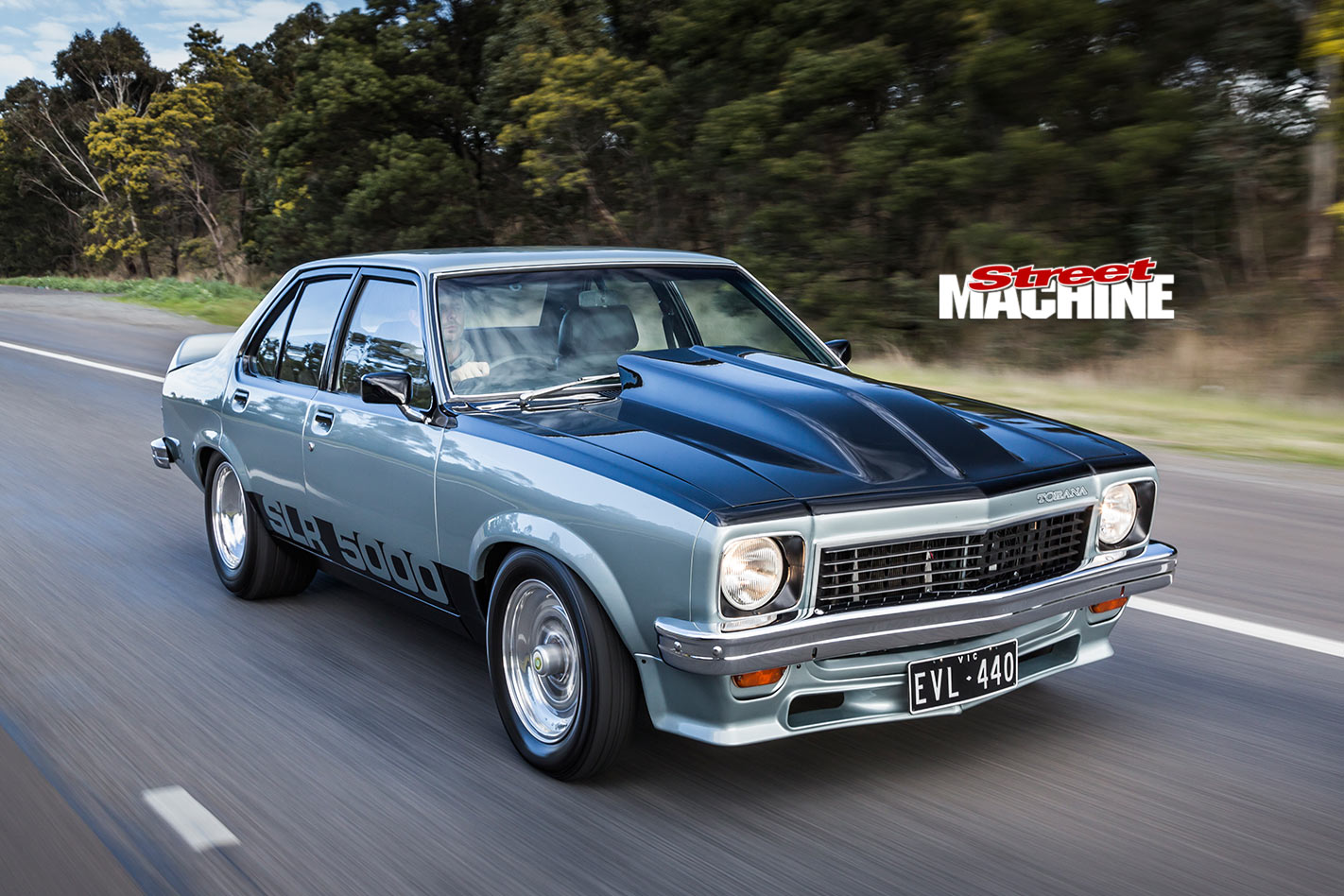