THE Nissan R32 GT-R has a reputation as one of the most fearsome road and race cars ever to have graced the blacktops of Australia. The formidable performance and technology of the car had Wheels magazine nickname it ‘Godzilla’ back in 1989.

The R32 GT-R is one of the most iconic Japanese sports cars ever built, and with only 100 locally delivered cars sold in Australia (though many more privately imported since), it is also a fairly rare beast on our shores. The factory twin-turbo 2.6-litre engine is a powerhouse with four valves per cylinder, developed and destined for Group A racing. 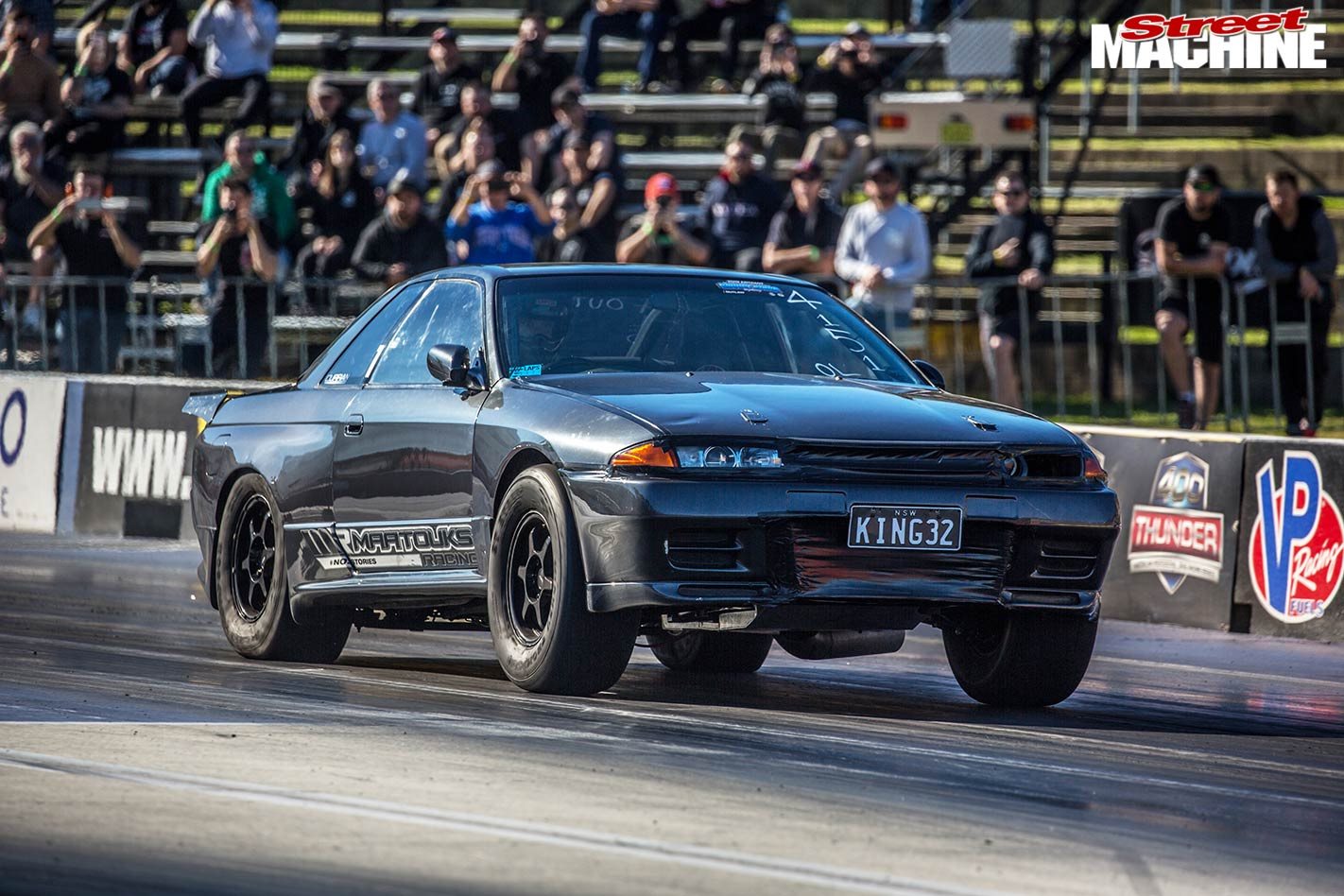 Anthony Maatouk of Sydney’s Maatouks Racing has partnered with customer Nader Nader to build an R32 GT-R capable of six-second quarter-mile passes at over 200mph, and they intend for it to become the quickest R32 on the planet.

If you know much about racing six-bangers, you’ll know that the name Maatouk is synonymous with Nissan RB engines. For over 10 years, Anthony has been pushing the boundaries with the platform, from 10-second VL Turbos back in the day to now running sixes with this heavyweight R32 GT-R. KING32 recently went 6.92 at an incredible 210mph over the quarter-mile on radials – no mean feat for a street car.

Watch next: JUN II becomes the first Skyline GT-R into the sixes (2019)

The original intention was to keep the car streetable, with a fairly serious goal of running an eight-second pass over the quarter-mile. The original 2.6-litre engine got a teardown and was fitted with a 3.2-litre Nitto stroker kit, and with that combination the car eventually far eclipsed initial expectations to run a best of 7.00@199mph with a factory block.

It’s only just been upgraded to a billet block, and while Anthony’s preference would’ve been to stay with the factory cast-iron block, KING32’s main competition – JUN II out of the Croydon Racing Developments (CRD) stable – made the switch to billet hardware, and the Maatouks boys had to follow their lead lest they get left behind.

Watch next: Maatouks Racing first into the sixes with their R32 Skyline GT-R (2018)

Revs and boost are your friends when it comes to making horsepower, and this combination has both in spades. The massive 98mm Precision turbo is bolted to a 6boost Pro Mod exhaust manifold, and pumps a whopping 70psi into the little 192ci engine, which gets buzzed to a crazy 11,000rpm! 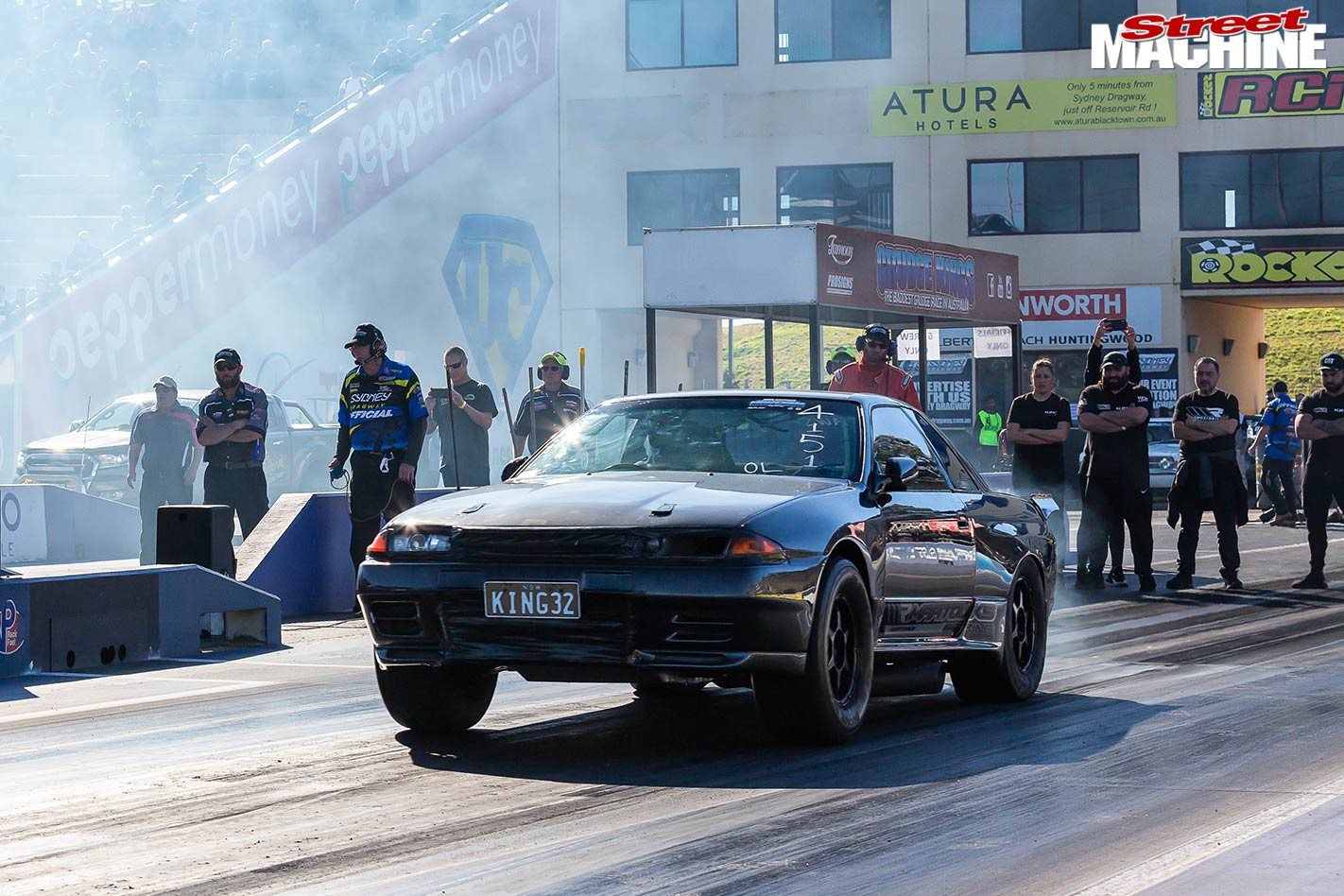 The Turbosmart 60mm gate is a custom item that is run by a CO2 system controlled by the Haltech ECU, and the engine bay is stuffed with a massive five-inch stainless dump pipe.

Aside from the gate, the Haltech controls a huge number of functions outside of the crucial engine management, including the entire all-wheel-drive system, with inputs from wheel-speed sensors and torque management.

As the car needs to remain a streeter, it runs on E85 and is fed by a belt-driven Aeromotive pump and regulator, and 12 2400cc Siemens Deka injectors. The air/fuel mix is fired by a set of Nissan R35 GT-R coils.

The move to a billet block saw an instant gain – specifically through weight loss – and the car dropped into the sixes with the aforementioned 6.92@210mph pass.

Backing the six-pack is a TH400 transmission by Al’s Race Glides, which bolts up to the factory all-wheel drive system. Although the factory diffs and driveshafts will hold the power well into the sixes, the rear diff has been changed to an IRS nine-inch. The driveshafts still retain the factory dimensions, but now feature chrome-moly tubing.

The AWD system can be deactivated at the press of a button, so the car does its burnout in two-wheel drive before engaging all the wheels on the startline.

As far as maintenance goes, it’s pretty straightforward, with just your regular race car-style servicing – oils, filters, injector cleaning and the like. The engine combination has proven very reliable.

Tuning the AWD Nissan is a lot different to tuning a two-wheel-drive car. You’re able to play with the power split on the all-wheel drive system – crank up the bias towards the front or rear – but KING32 effectively runs with a 50/50 power split. 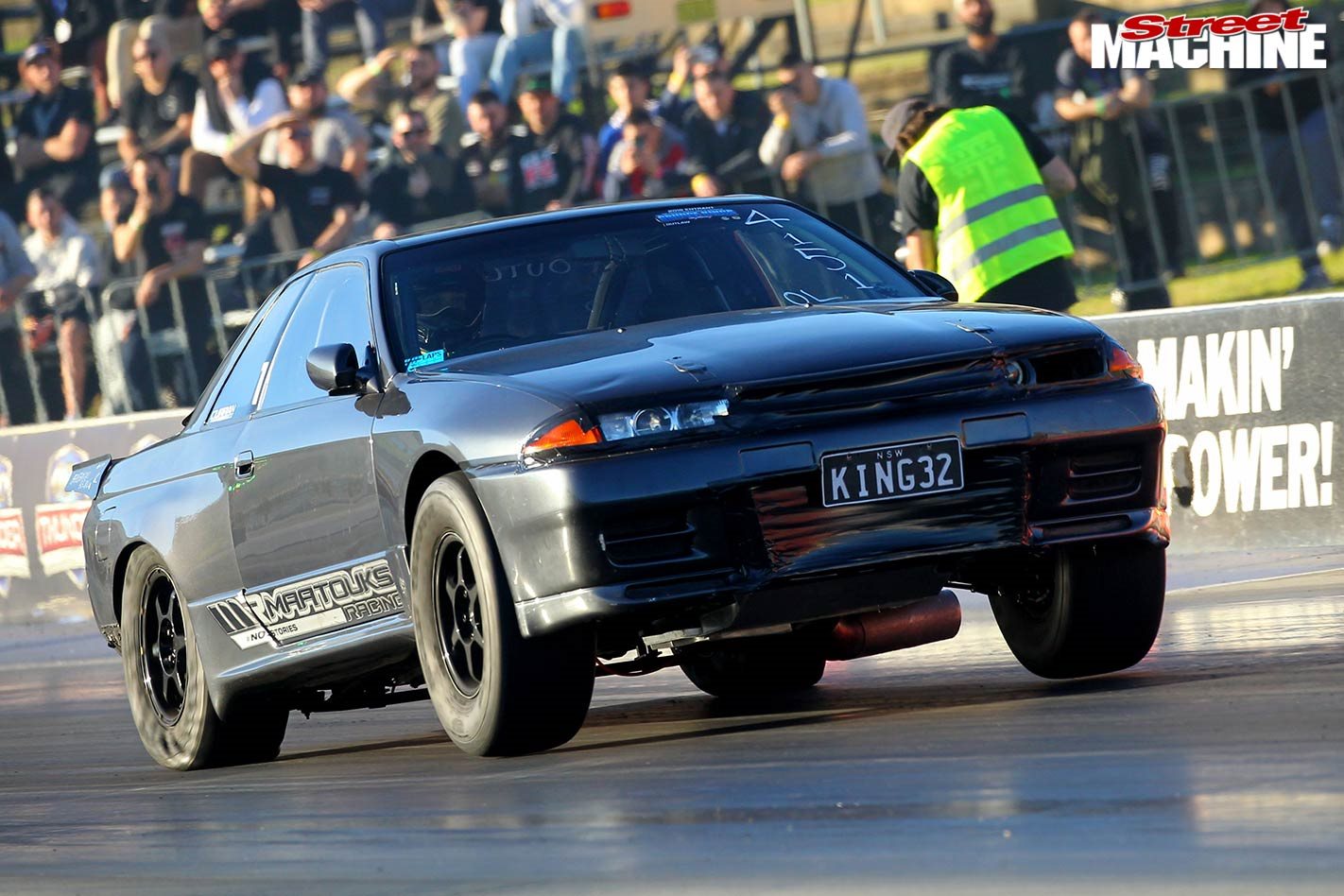 Anthony has been able to apply what he’s learnt from the METRO R32 GT-R, which was the world’s first GT-R into the sixes on radials, and with a PB of 6.55@219mph, it remains the world’s quickest all-wheel drive radial car, period. However, METRO is very much a race car, while KING32 remains far more street oriented.

While the main goal for KING32 has been to get into the sixes in street trim, the JUN II GT-R owned by Rob Marjan out of the CRD stable has managed a quicker elapsed time of 6.86 seconds, but at a lower terminal speed. JUN is the quickest street Skyline GT-R and KING32 is the fastest, but the Maatouks team has its sights set on owning both records. Impressively, after Marjan ran into the sixes with his car, he drove it back to the workshop from the track!

The friendly rivalry between the two workshops has been ongoing, but the ultimate plan for KING32 is to get it into the 6.50s. It sounds easy when you say it fast, but taking a small-cube six-cylinder from a 6.90 to a 6.50 will be one hell of an accomplishment.

One area with room left for development is the suspension. While the rear end runs a set of custom shocks from Street Car Fabrication, there’s a set of conventional-style coil-overs in the front.

If you ever get the chance to see this car run, it will be an experience you won’t forget in a hurry. The sound of the massive turbo doing its stuff and the huge, clean rpm will stay with you long after the car has gone!