Now that Fury Road has scooped a bunch of Oscars, let’s look back at some of our favourite rides from the film

THERE was never much hope that Mad Max: Fury Road would take out the Oscars for Best Film, or Best Director for George Miller. Even so, it did take home six awards: Best Production Design, Best Film Editing, Sound Editing, Costume Design, Sound Mixing and Best Makeup & Hairstyling. Not a bad acknowledgement for what was an epic production that produced one hell of an exciting and crazily detailed film. 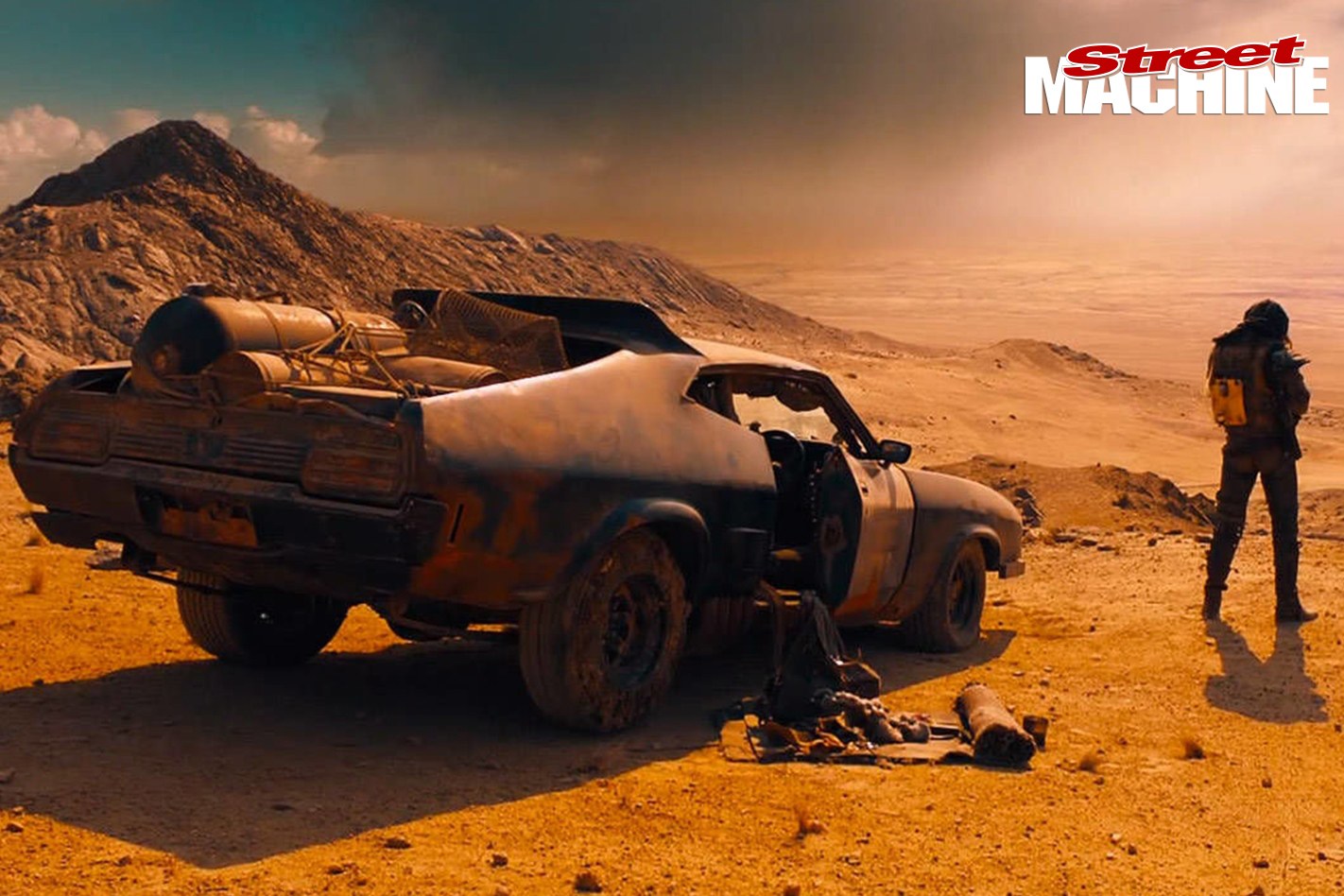 And while Mad Max remains the pinnacle of car flicks, I’m a massive fan of Fury Road. Sure, it was filmed on another continent and the iconic Interceptor doesn’t get too much screen time, but I reckon it is a more-than-worthy addition to the franchise. It was clearly made with the love and passion of many car-mad artists and craftspeople, including principle vehicle designer Peter Pound, production designer Colin Gibson, chief mechanic Mark McKinley, engineering guru Anthony Natoli, body guys Mark Natoli and Paul Nolan, Interceptor builder Cameron Manewell and many others. The detail work on every car, truck and bike is truly mind-blowing. 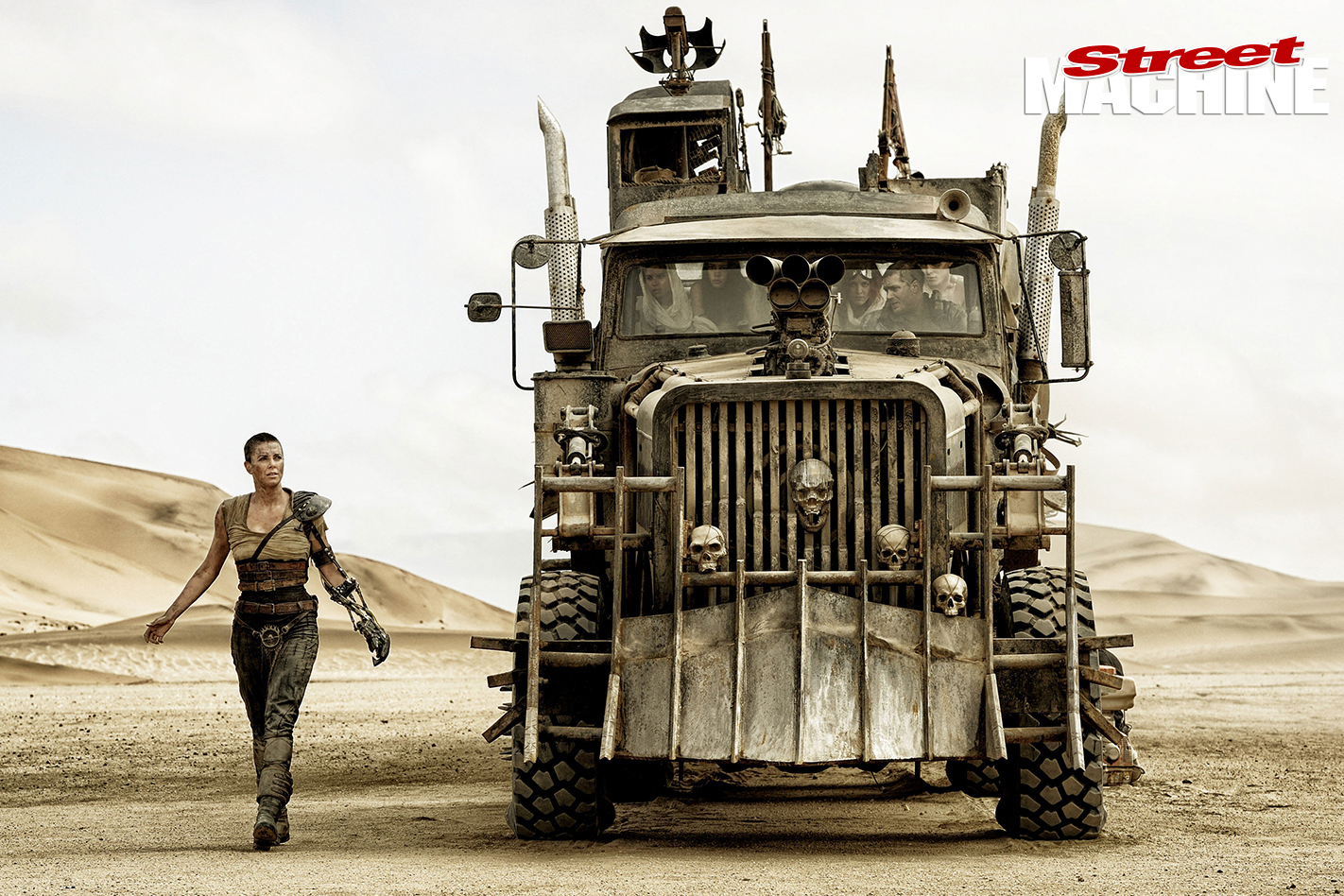 Mark McKinley gave us an insight into the process of turning the concept drawings into reality in the May 2015 issue of SM:

“The basic idea with all the vehicles was we got crappy old bodies from the country and we made them to suit the artists’ impressions,” Mark said. “We then bought Nissan Patrols, Mitsubishi Pajeros, Ford F-trucks, Land Cruisers, Holden Jackeroos, and transplanted the old bodies onto those frames, which meant stretching them to fit. 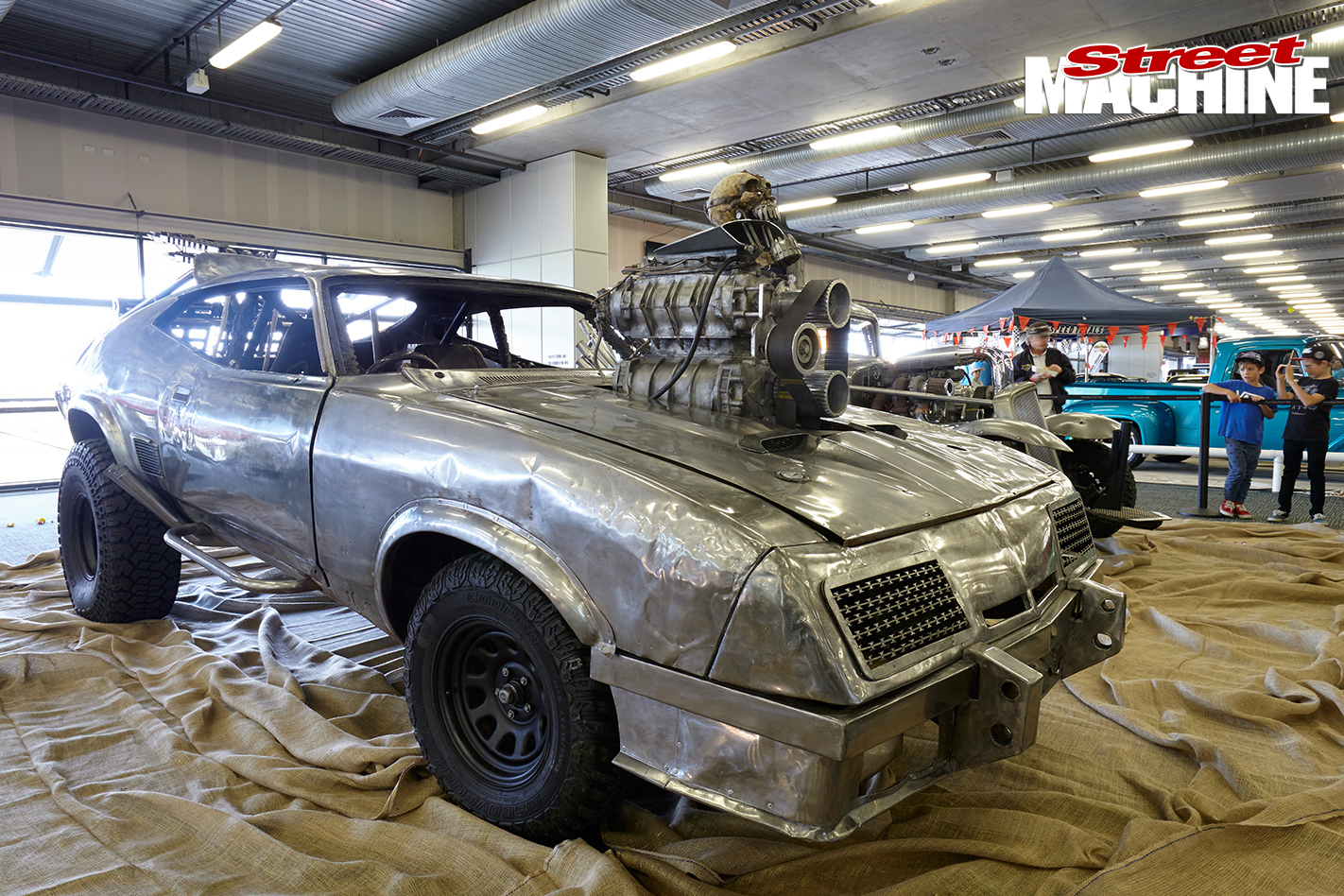 “Gigahorse runs twin 502 Chevs with 8/71 superchargers. They came as crate motors but we put the blowers and manifolds on them. The original concept was for fibreglass dummy motors and to run a hidden single motor, but Colin Gibson said we had spare cash and we wanted something more realistic.

“Anthony Natoli, from Natoli Engineering, did all our widened axles and he built the straight-cut gearbox for The Gigahorse. Originally we had a Turbo 400, but it failed so we moved to an Allison truck trans and then Anthony’s gearbox adapter. 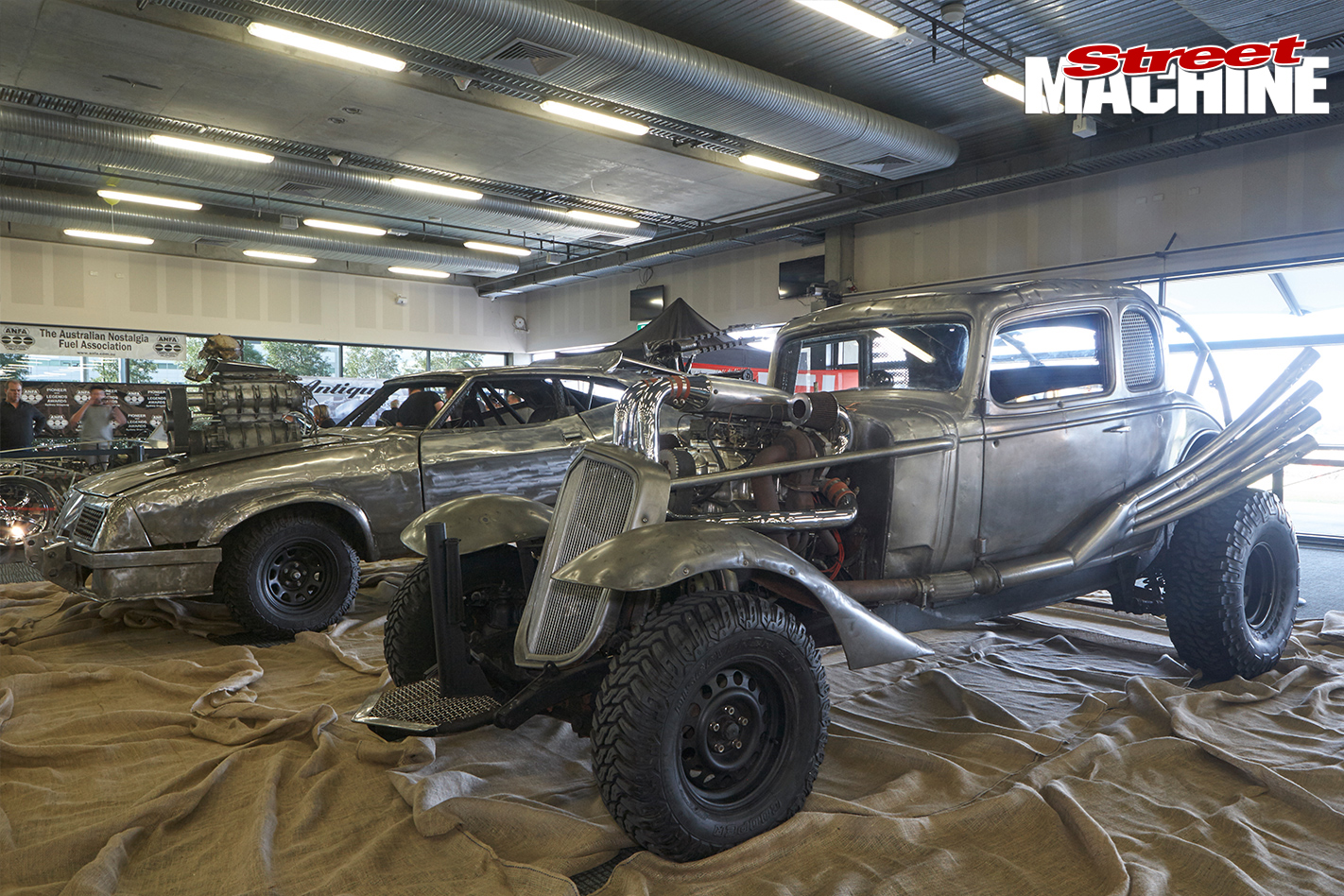 “We ended up going from Namibia to Cape Town, so things went into storage in Cape Town. There was 120 tonnes of vehicles that got crushed because it was all there on carnet, so it had to either be destroyed or paid to be shipped back.

“I flew back to co-ordinate it, and it was a very sad day. Even though I hated the Rip Saw, it was sad watching them get crushed and coming out as cubes.” 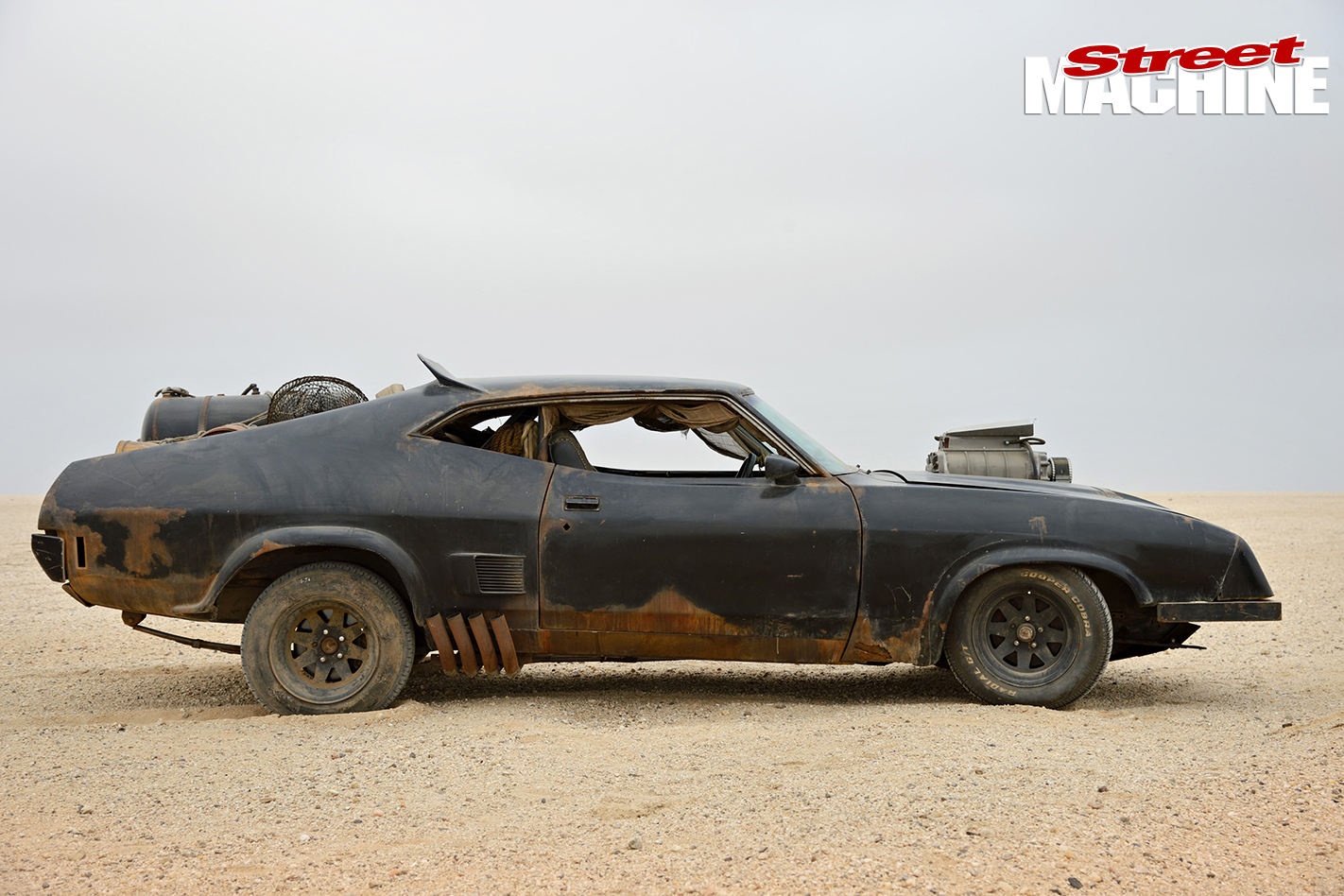 Except for all the sand dunes, this photo could have been taken in 1981 out the back of Broken Hill. The Interceptor starts Fury Road in similar spec to how it appeared in Mad Max II, with the blower, Scot-style injector hat and zoomies, and long-range fuel tanks all coming back for another run. 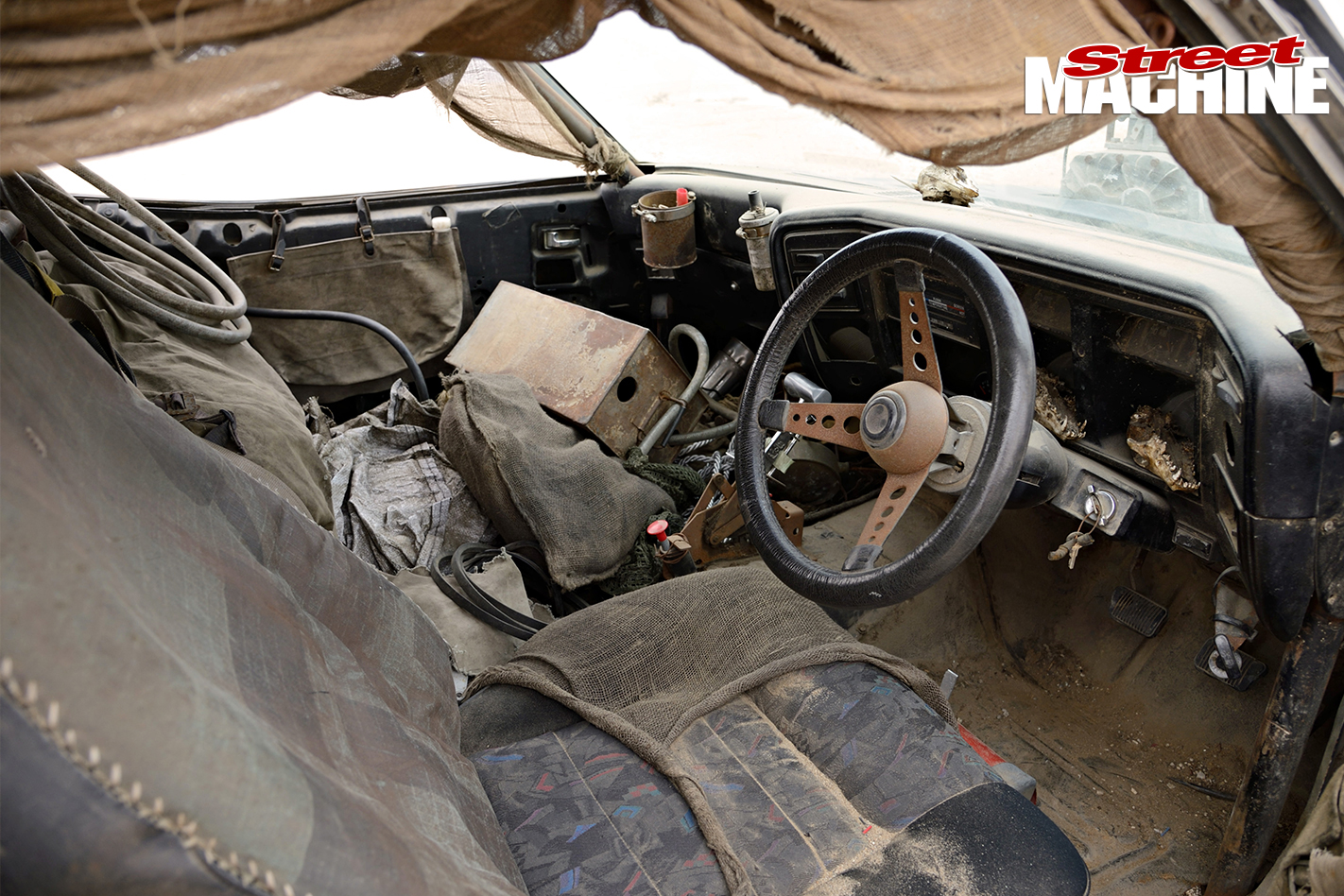 Colin, George Miller and the design team paid careful attention to ensure The Interceptor’s interior carried plenty of flavour from the original films, right down to the Maxrob three-spoke steering wheel. 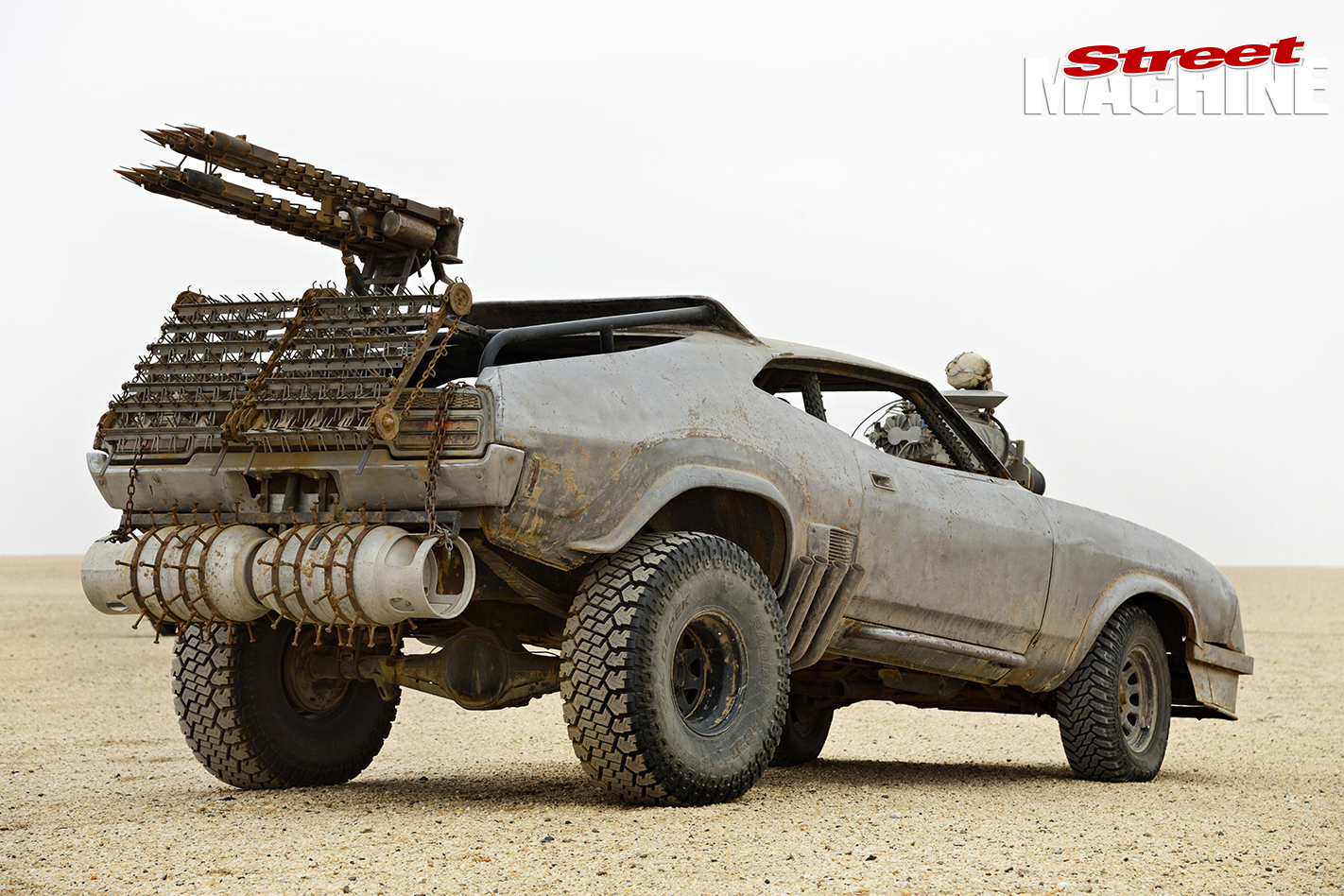 After the baddies flip The Interceptor into a metal pretzel in the first few minutes of Fury Road, it’s taken and reborn as the Razor Cola, with twin superchargers, bare-metal skin and more off-road flavour.

Colin freely admitted he lucked out finding a few extra XB coupe bodyshells, which allowed freedom to include a whole extra scene with The Interceptor. Sitting next to the black car, the bare metal coupe’s off-road chassis swap is obvious. 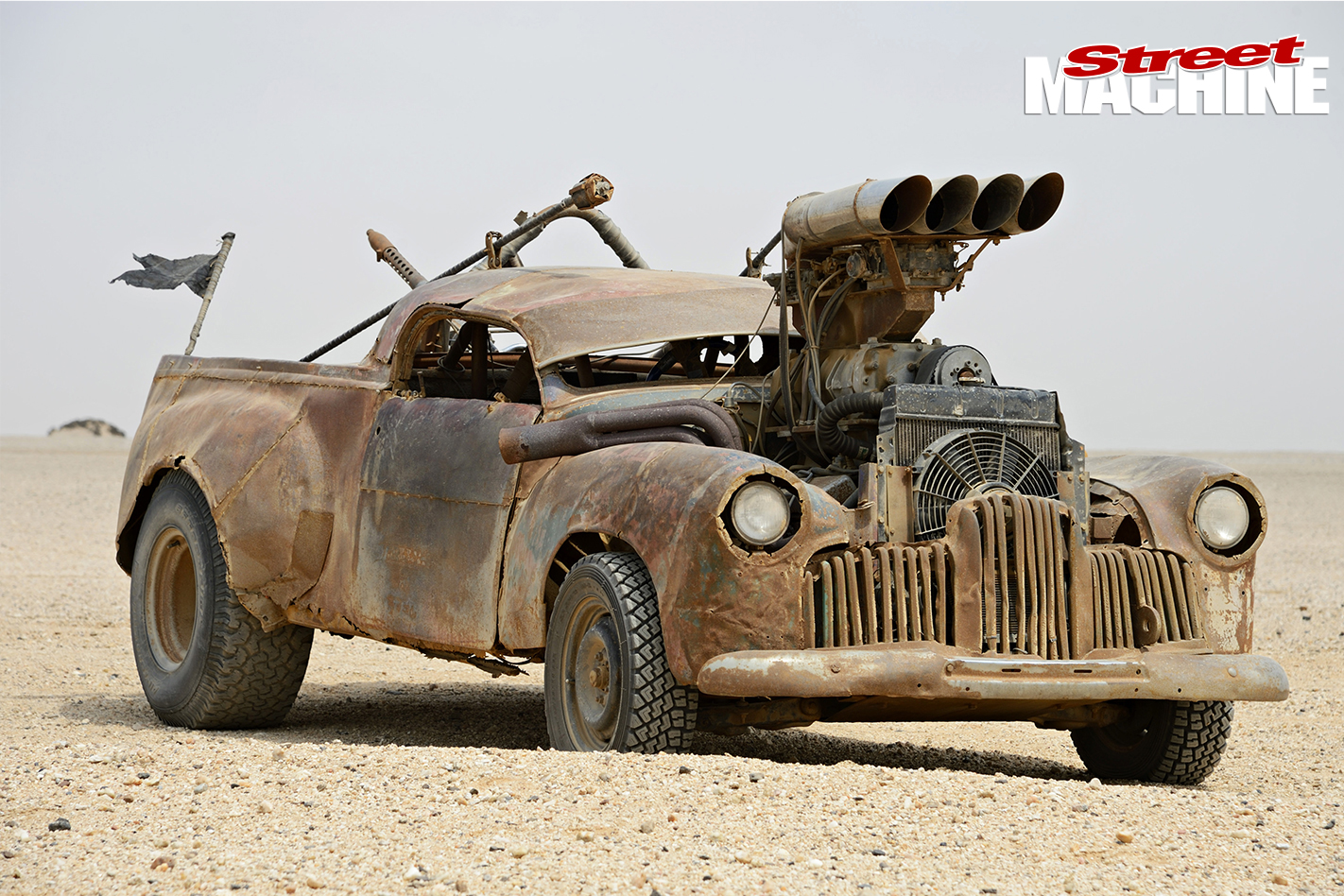 The Cranky Frank FX was originally shown off back in 2003 as a low-slung, massively chopped rat ute. However, with the move to Namibia, Frank’s ground clearance was jacked up to make him more driveable. The original builder now has an FX-FJ sedan dirt track racer, powered by a ProCharged 440! 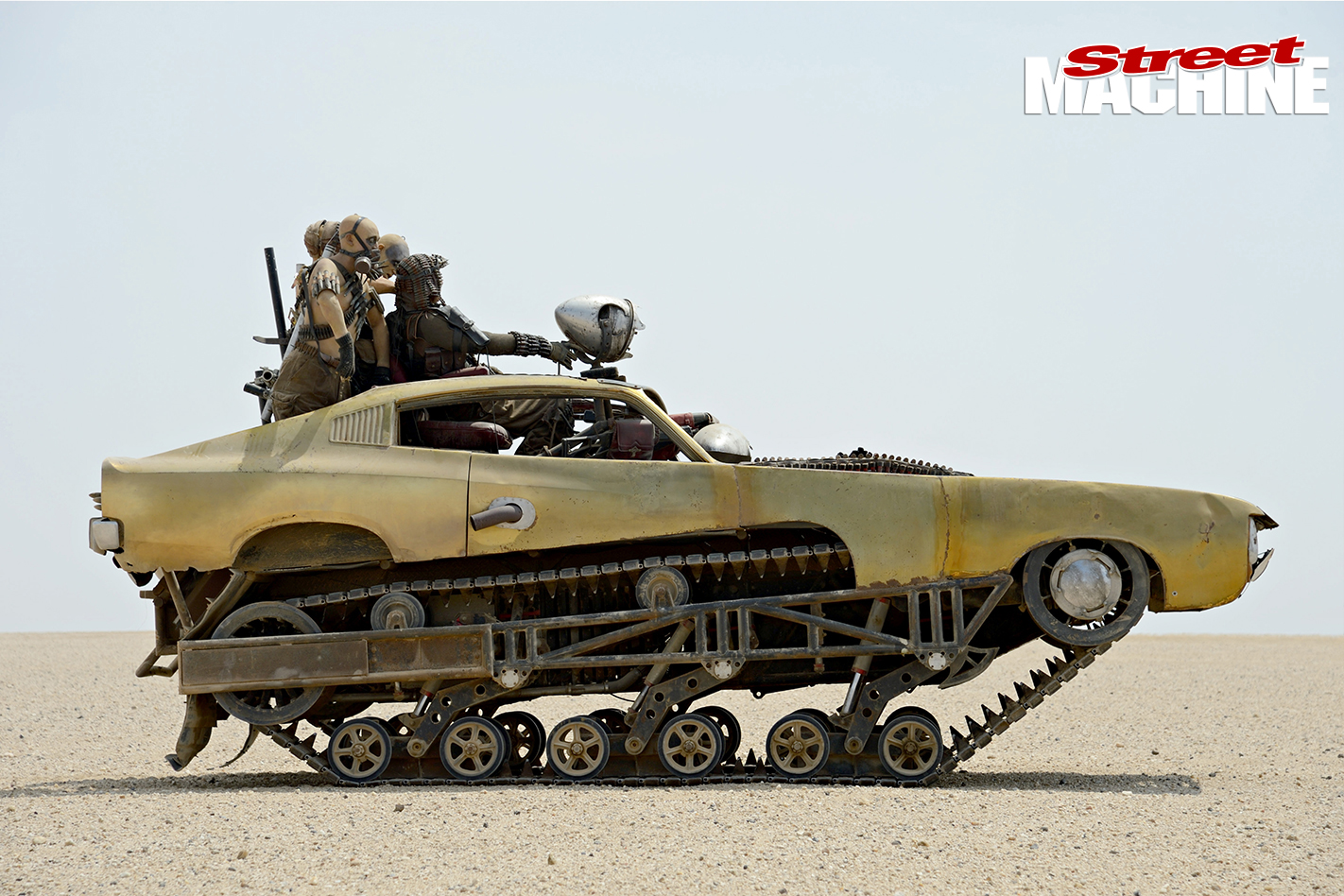 Based off a tracked off-road recreational vehicle and powered by a supercharged 509-cube New World big-block V8, the Rip Saw is an insane creation that caused Mark plenty of headaches figuring out the custom hydraulic brake system it turned up with. Eventually he tamed the beast with adjustable pressure valves in the hydraulic lines so it wouldn’t drag its brakes anymore. 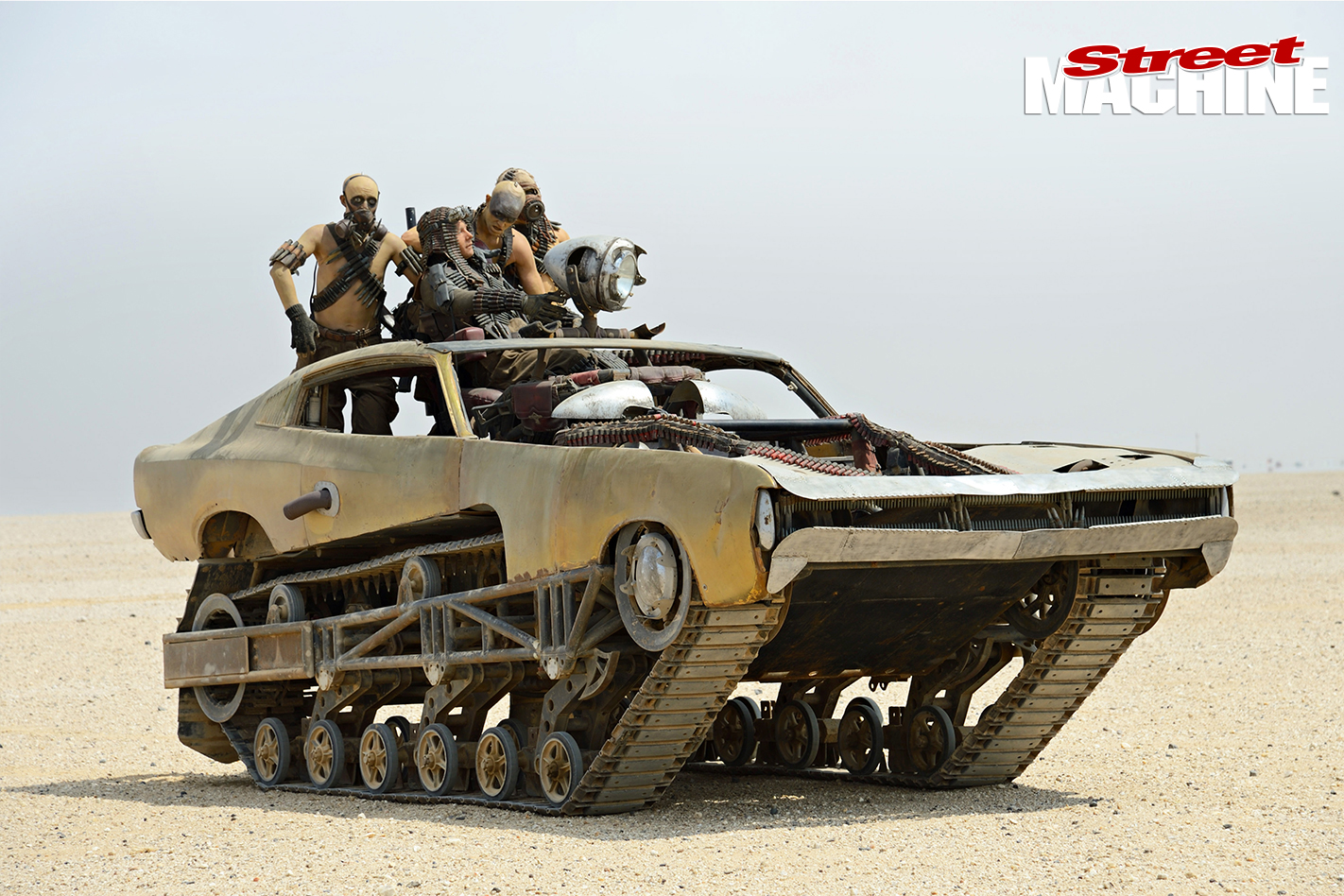 “It’s meant to be the fastest tracked vehicle in the world,” Mark said of the Rip Saw, “but it wasn’t quite up to that for our use. I ended up refining the brakes quite a lot. It was probably the most dangerous vehicle on set and took a lot of refining.” 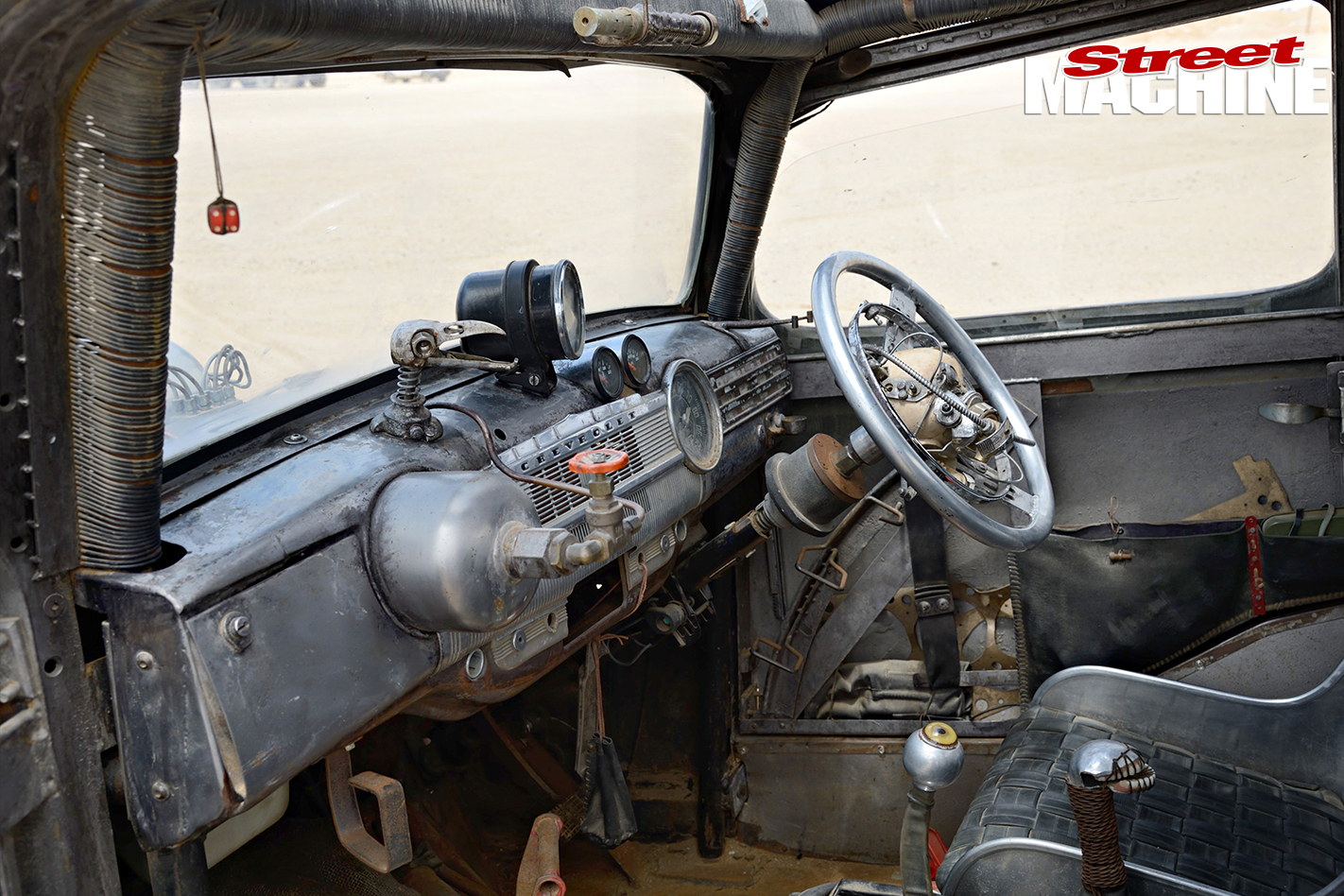 You’ve got to love the attention to detail in some of the cars – check out the nitrous bottle jammed into the dashboard! Post-apocalyptic life clearly allows plenty of free time to neatly customise your death machine. 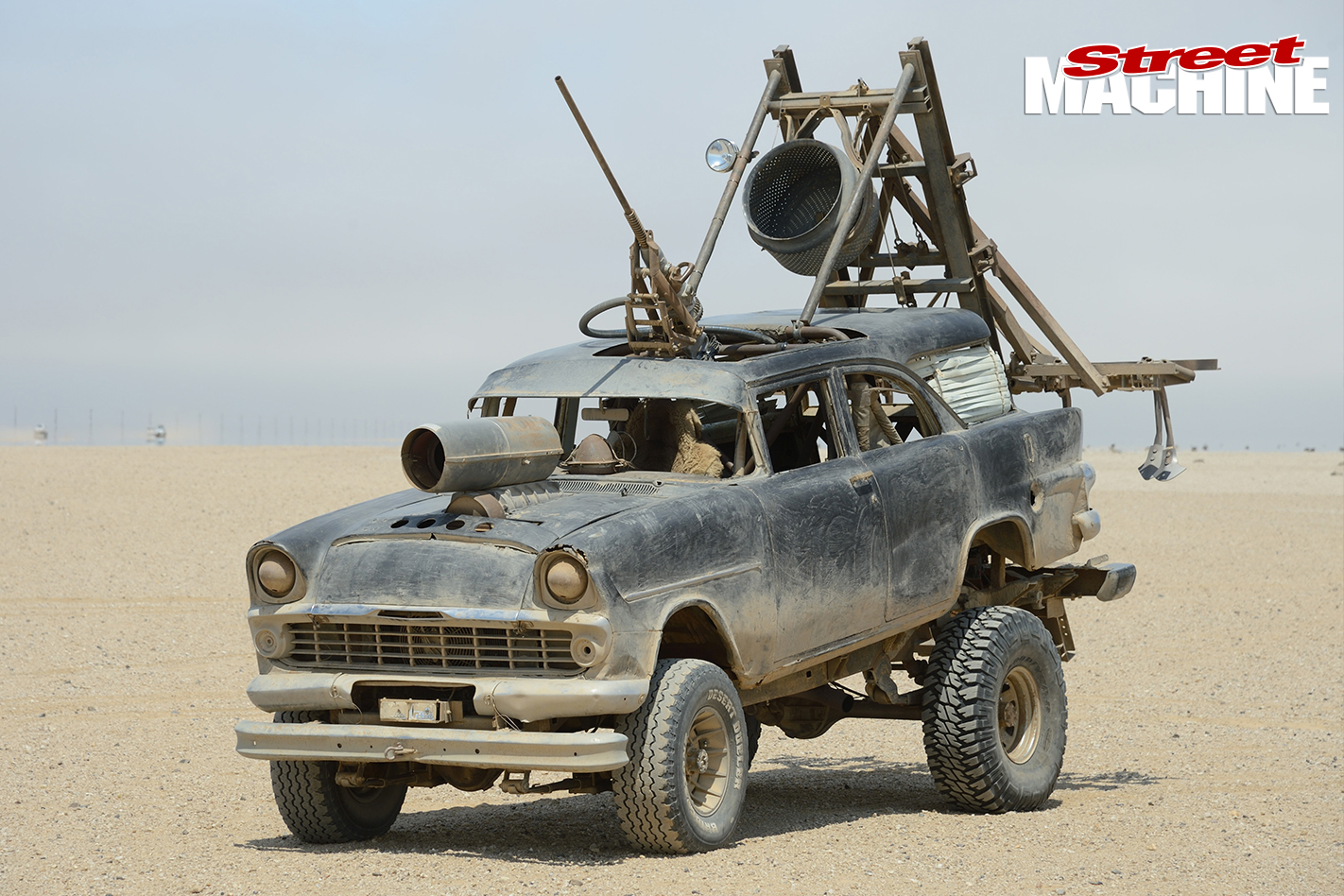 This EK station wagon, dubbed Ploughboy, is decked out with a harpoon and a hydraulic-driven plough. Amazingly, apart from most cars running hot, Mark reckoned they were all fairly reliable even in the desert. 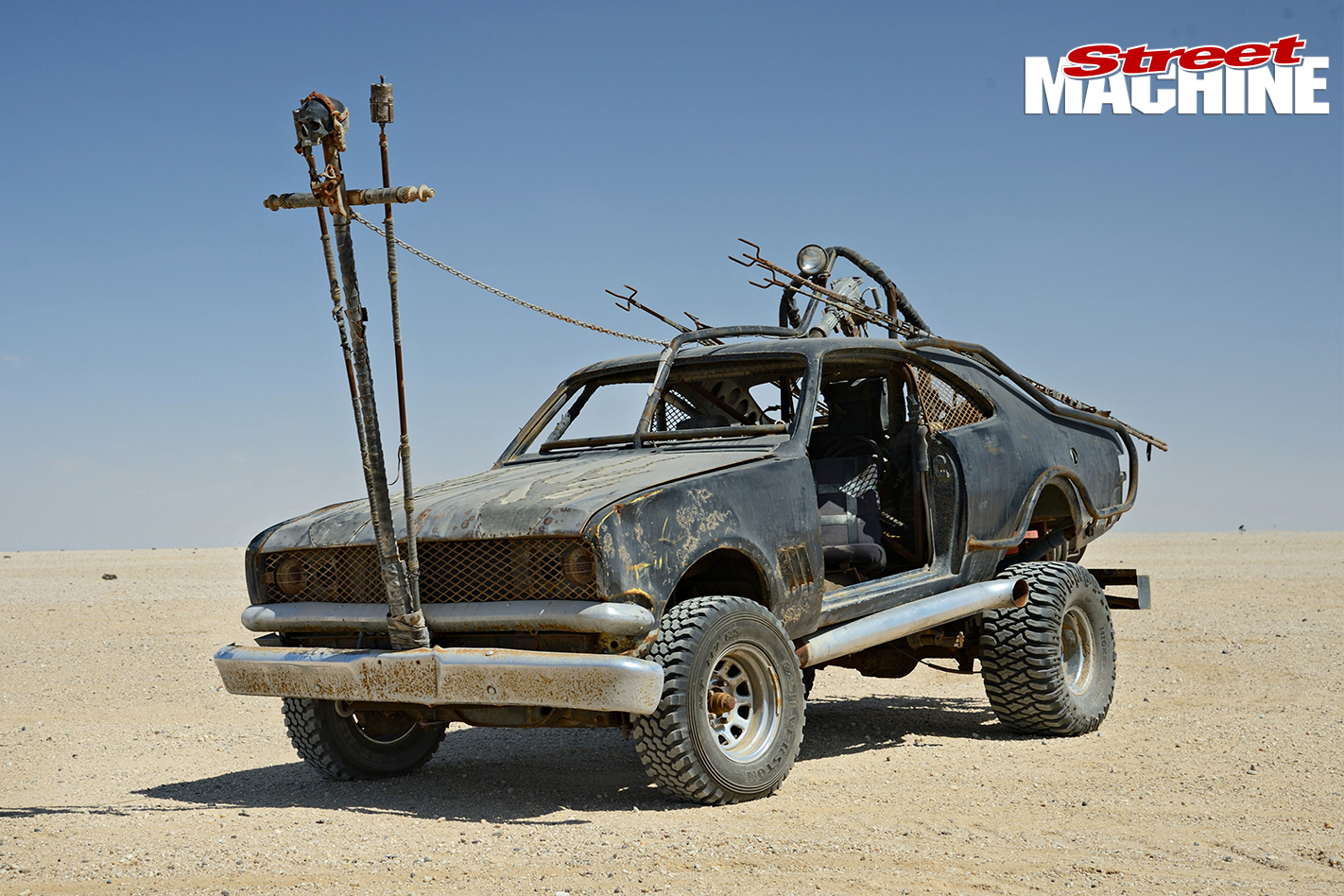 Yes, that is a real first-generation Monaro, one of two in the film. While Colin purposely found dungers to use, it doesn’t reduce the sting for Monaro fans to know they met a terrible fate. 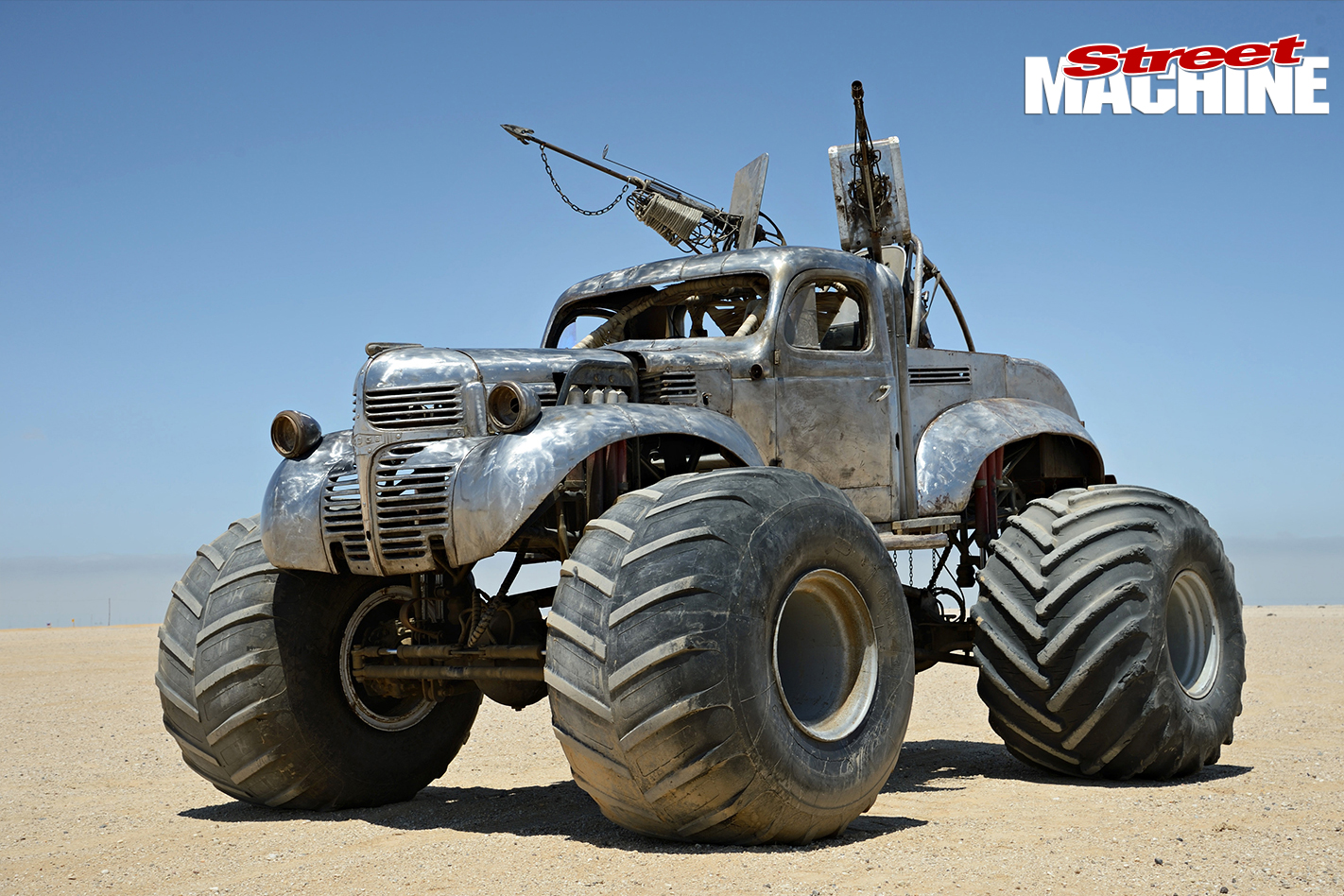 This Chevy Fleetline has been stretched over four feet wider to fit over the monster truck chassis. Three were built for filming, with two destroyed and one brought back to Australia in parts. 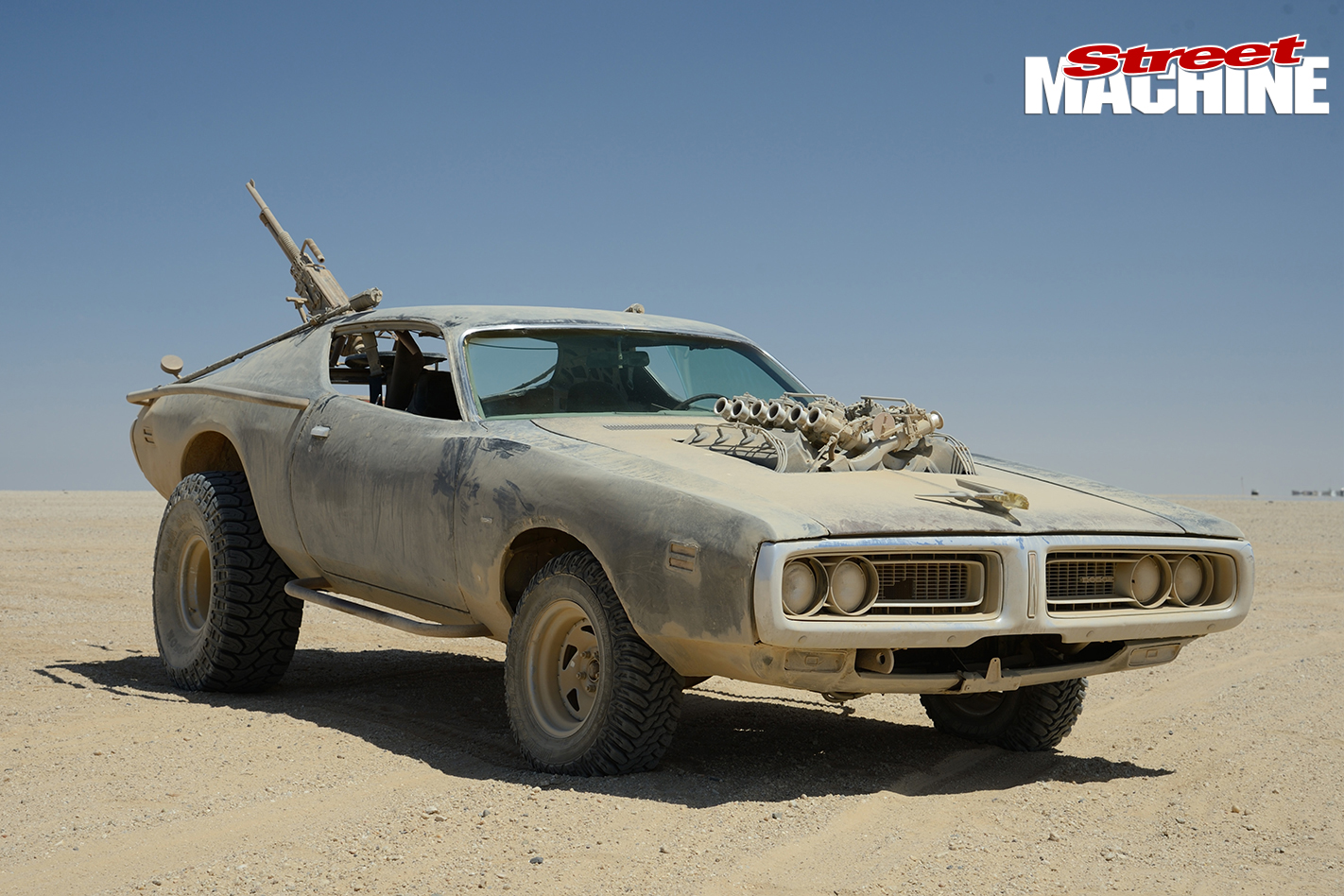 This ’71 Dodge Charger didn’t get much air time, but we love the cross-ram, six-Weber induction! 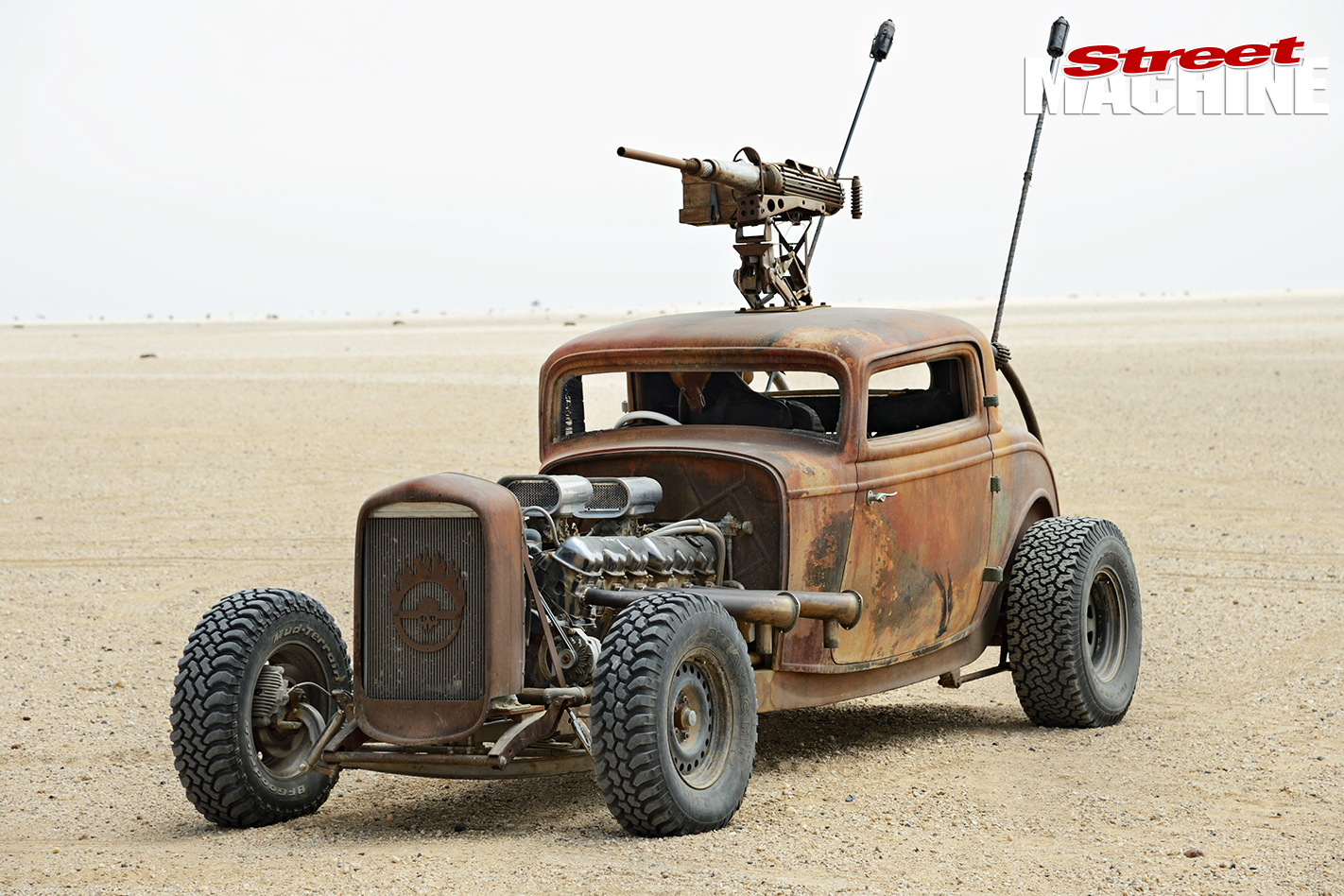 This stretched ’32 coupe was originally built by Ian ‘Elvis’ Davis, who powered it with a 702ci GMC Twin Six. It was a lot shinier when we featured it back in SM, August 2009! 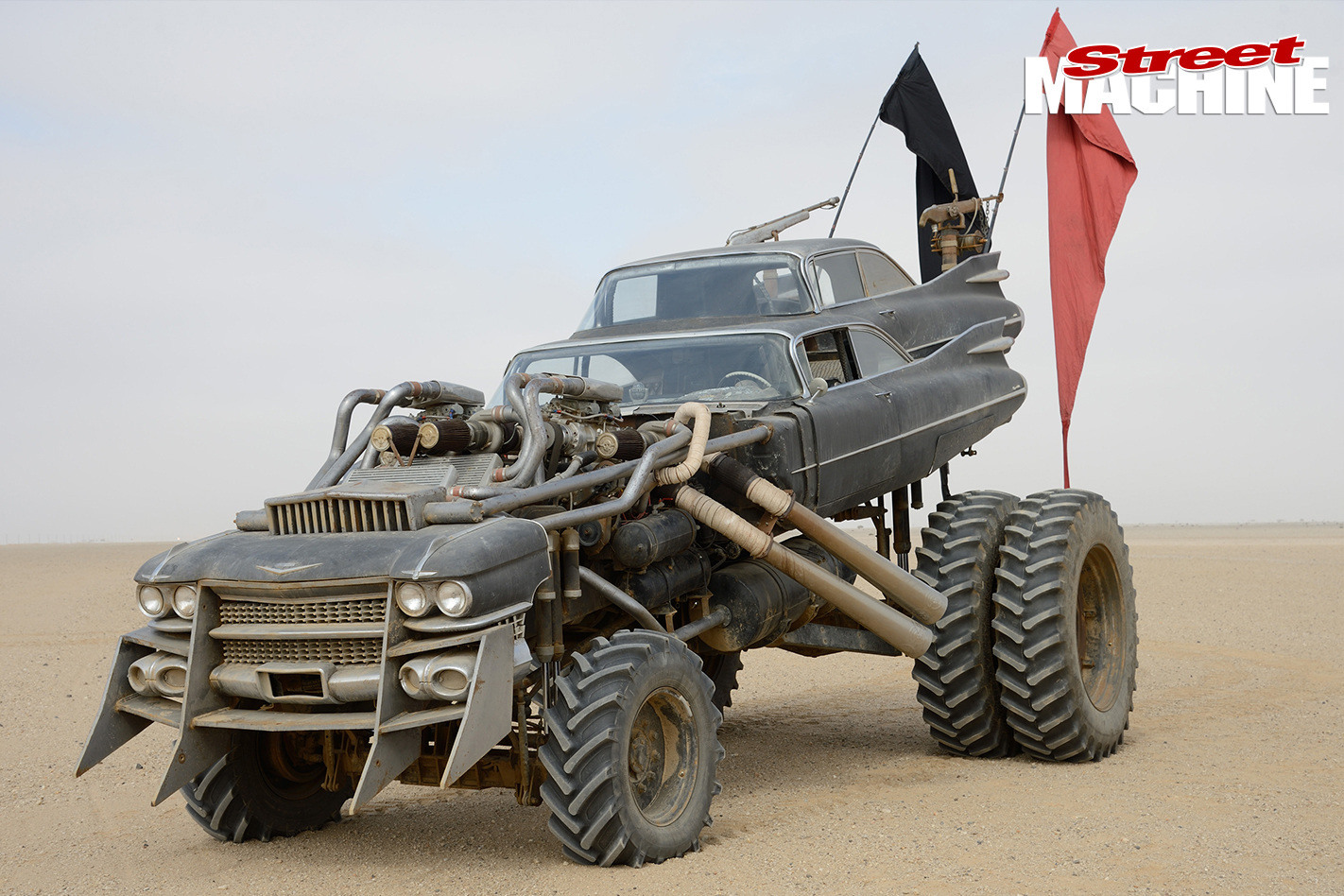 The Gigahorse is the icon car of the flim. The body is two 1959 Cadillac Coupe de Villes welded together, with two supercharged V8s making around 1200hp, driving through a handmade transmission on a truck chassis. Chief mechanic Mark McKinley had to shim the transmission every day to keep it driving! 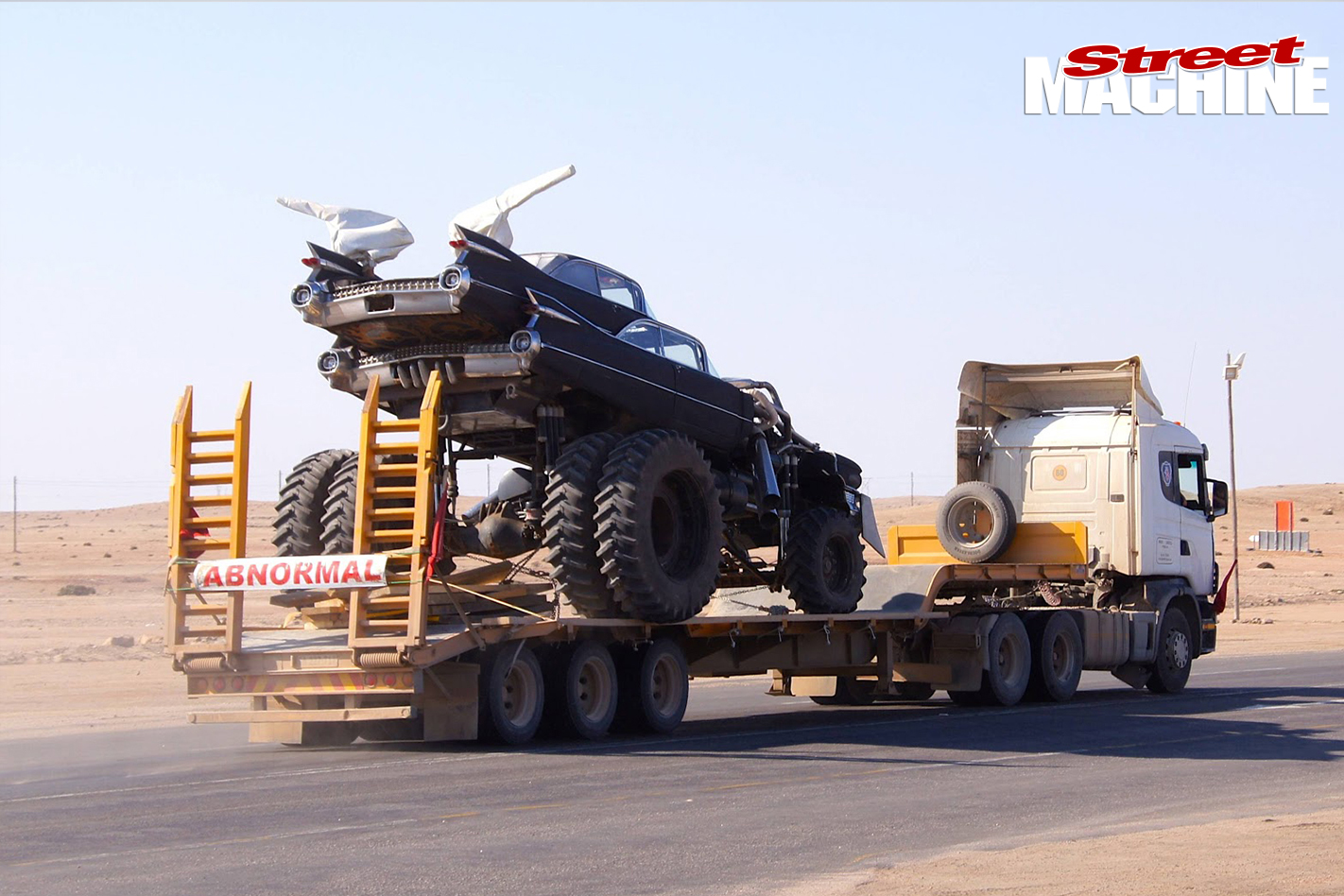 Mark explained how difficult it was just moving the Caddy/truck around: “The Gigahorse sits at four metres tall without the flags. Just to transport it means changing the wheels and letting shocks down, but the logistics of shipping, running and maintaining all these vehicles are huge. It is an immense process.” 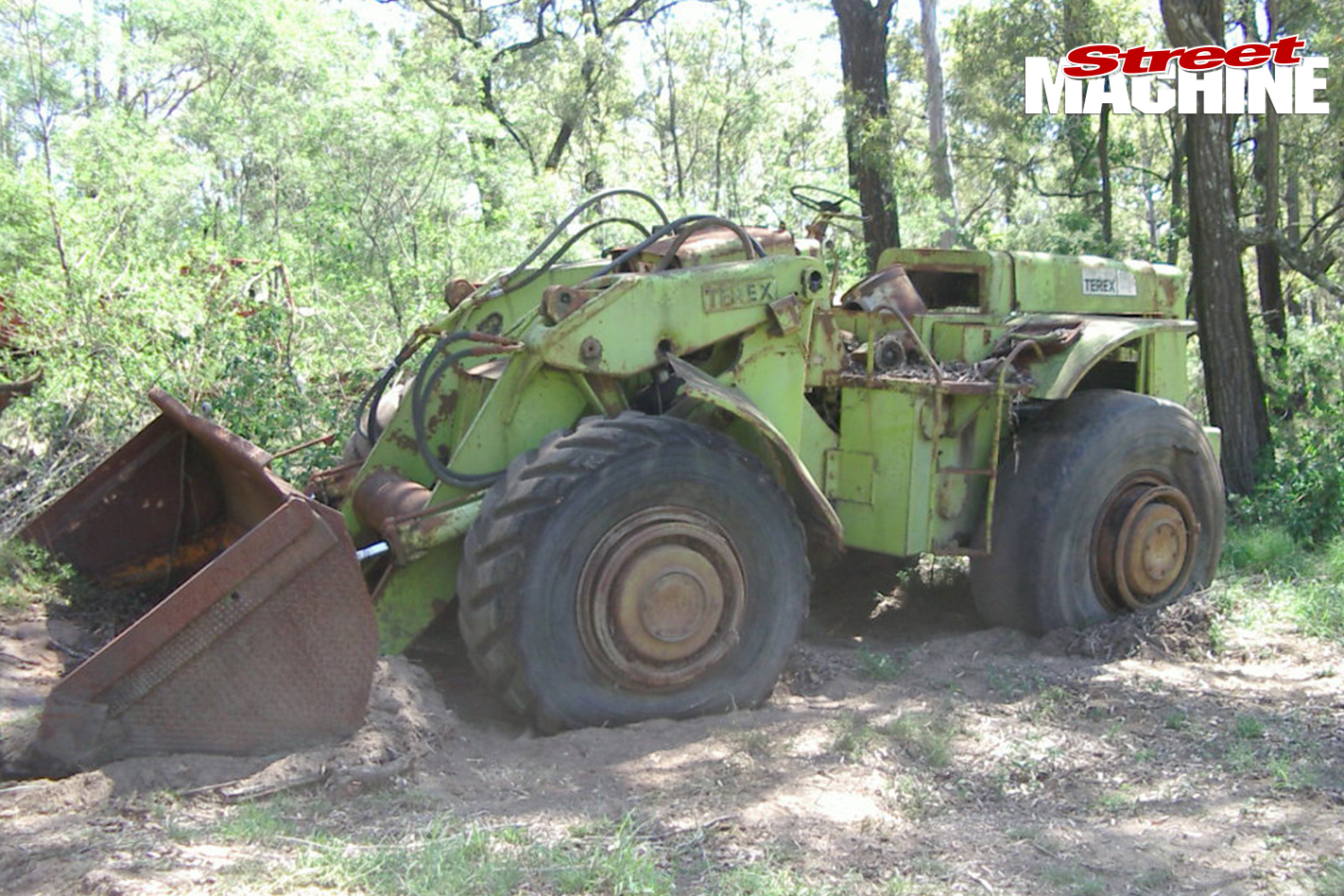 Mark used diff and reducer systems out of a pair of Terex four-wheel-drive front-end loaders to drive The Gigahorse. The massive hubs gave a 16:1 drive ratio for a 95km/h top speed. 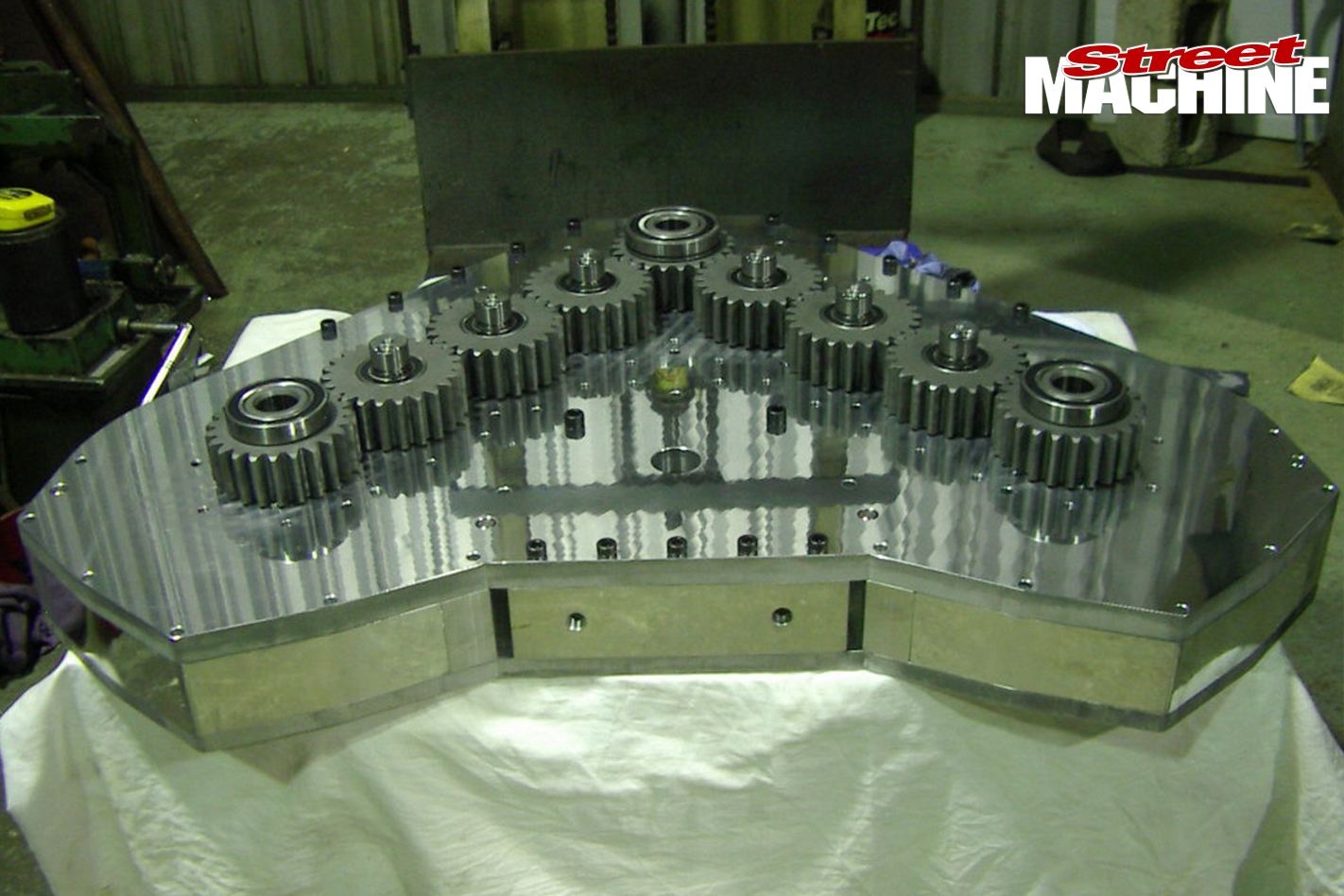 Anthony Natoli from Natoli Engineering made the straight-cut gear system to join the two big-block V8s, which Mark had to re-shim after each day’s filming. The entire piece is custom-made and took a lot CAD design time to hook it all up reliably to the Allison truck transmission. 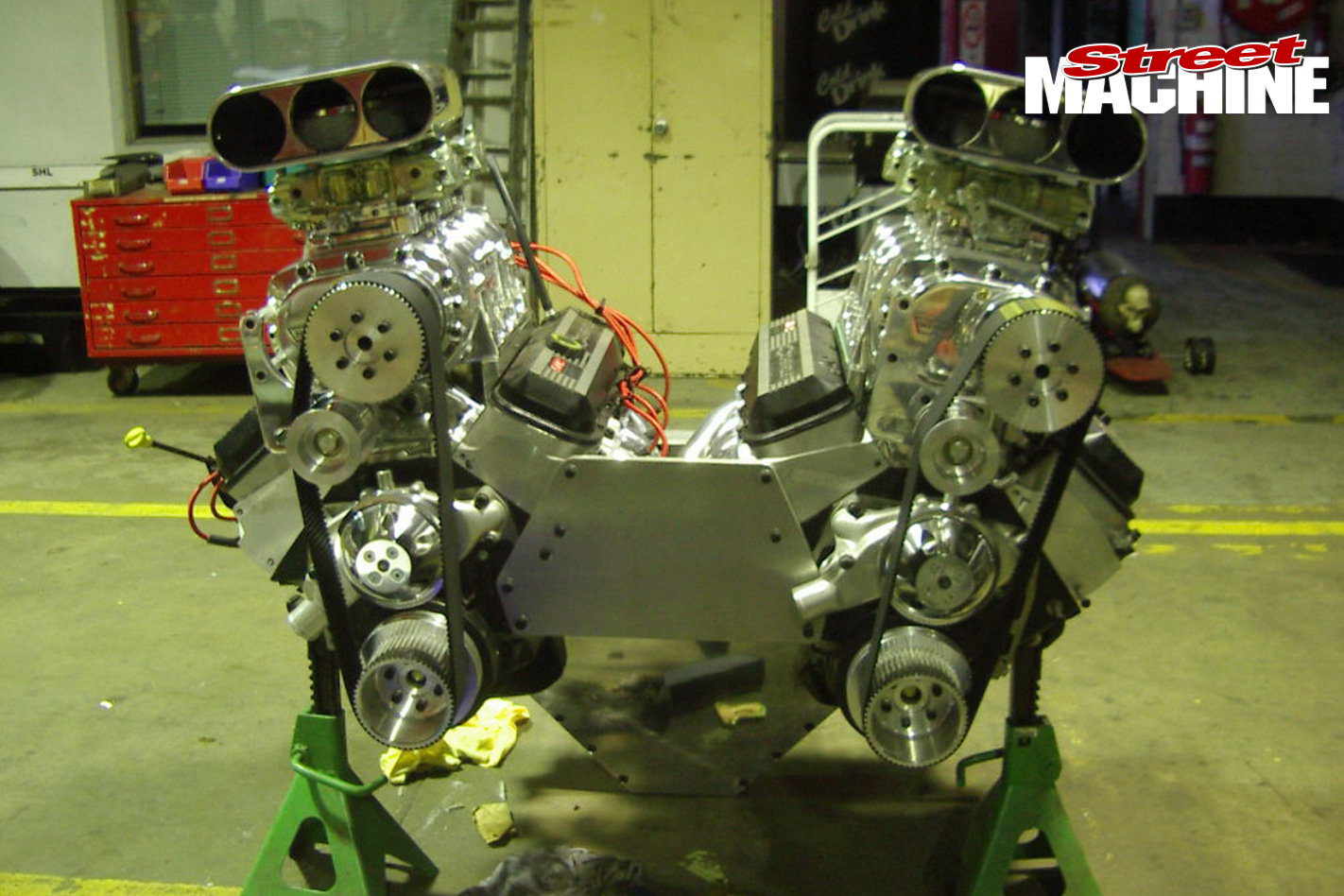 The original recipe called for dummy motors, but Colin found some budget to equip The Gigahorse with a pair of crate 502 Chev big-blocks topped with fully functional 8/71 blowers for an estimated 1200hp. 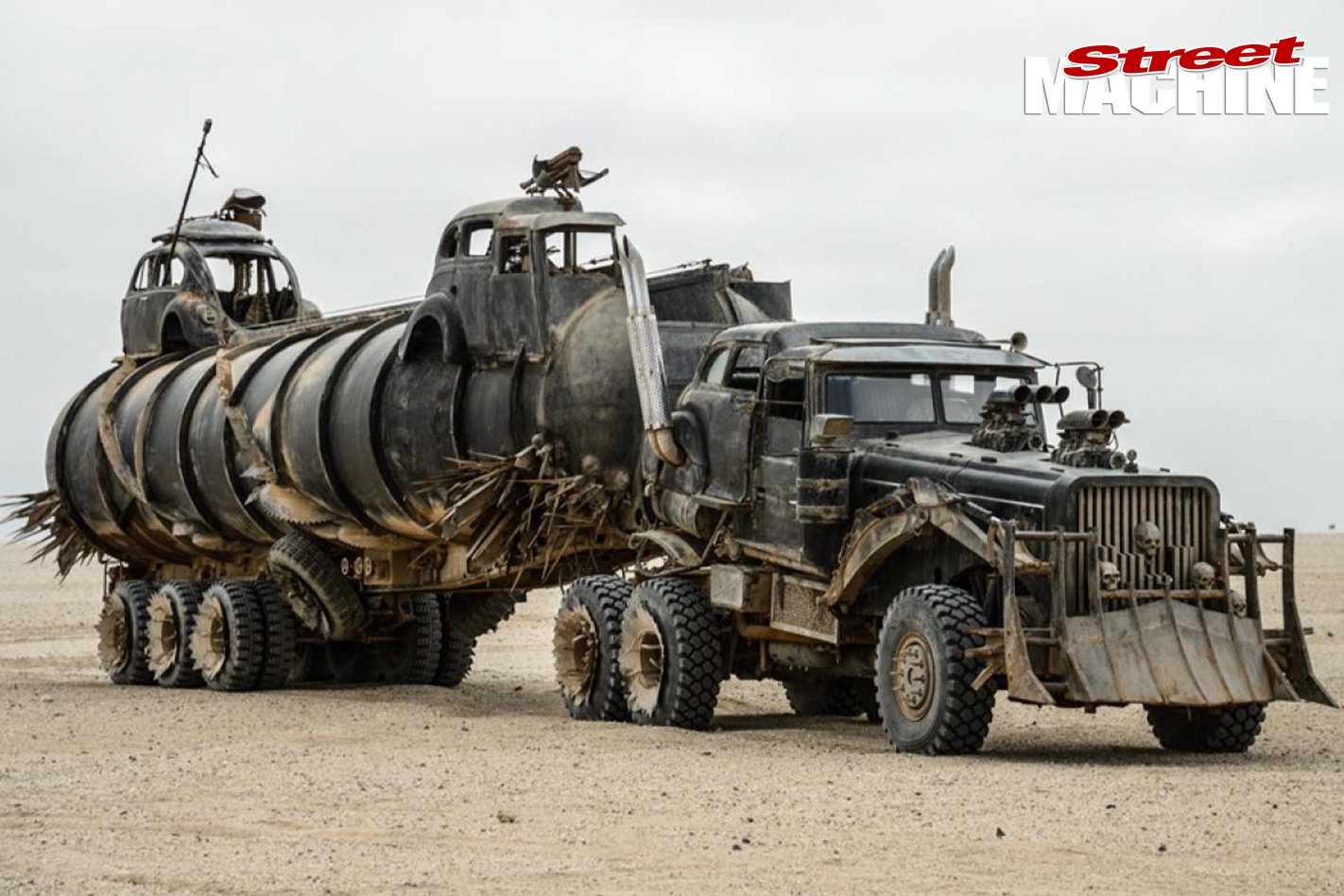 “The War Rig is based on a Tatra six-wheel-drive military truck,” Mark said. “We ended up getting a 600hp race engine and we stuck that in. It was their presence in the Dakar Rally that swung Colin to use the Tatra, but they were a little underpowered.” 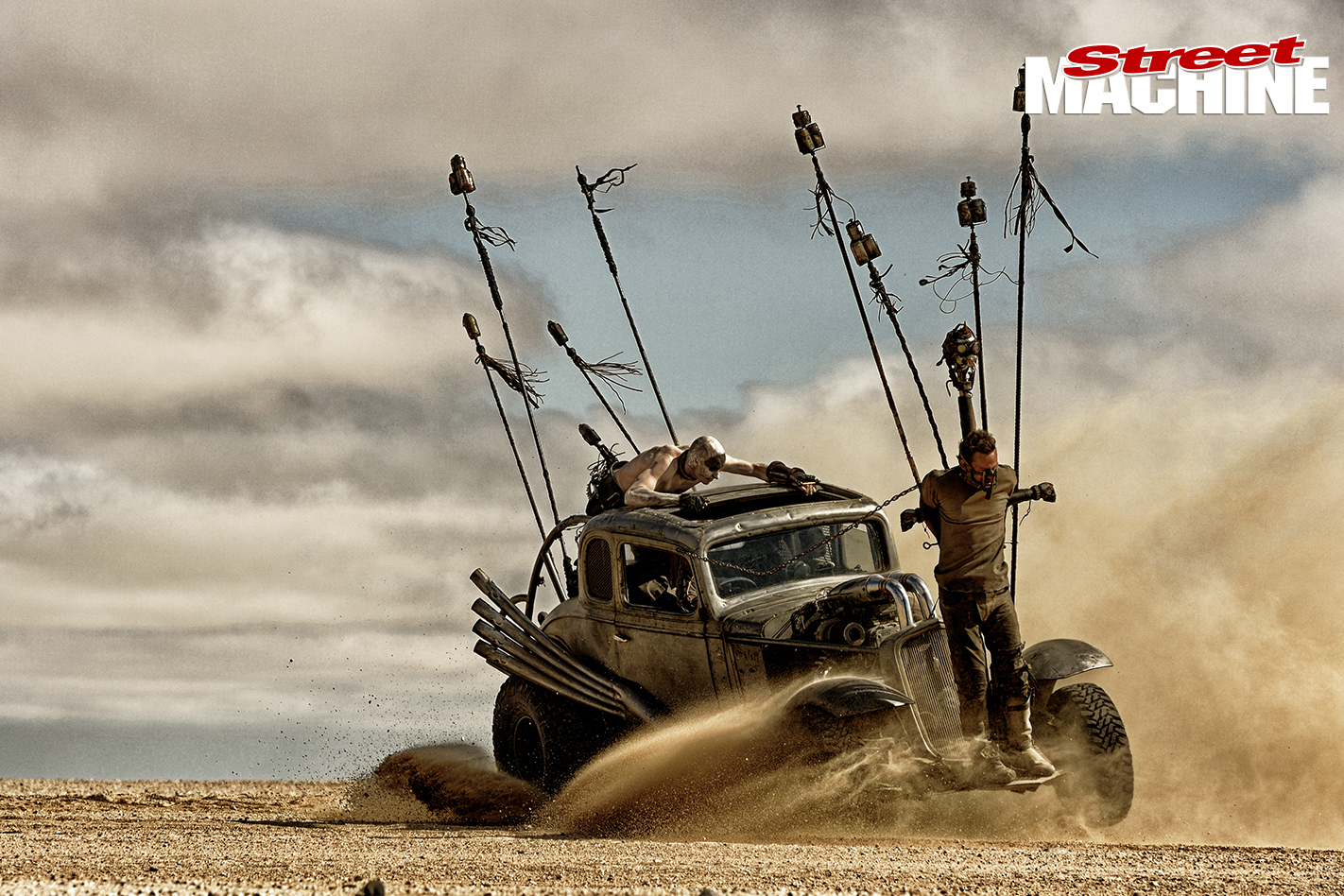 Nux’s ’34 Chev coupe was one of the stars of the film, powered by a blown and twin-turbocharged small-block. Sadly, it was scrapped at the end of the shoot. 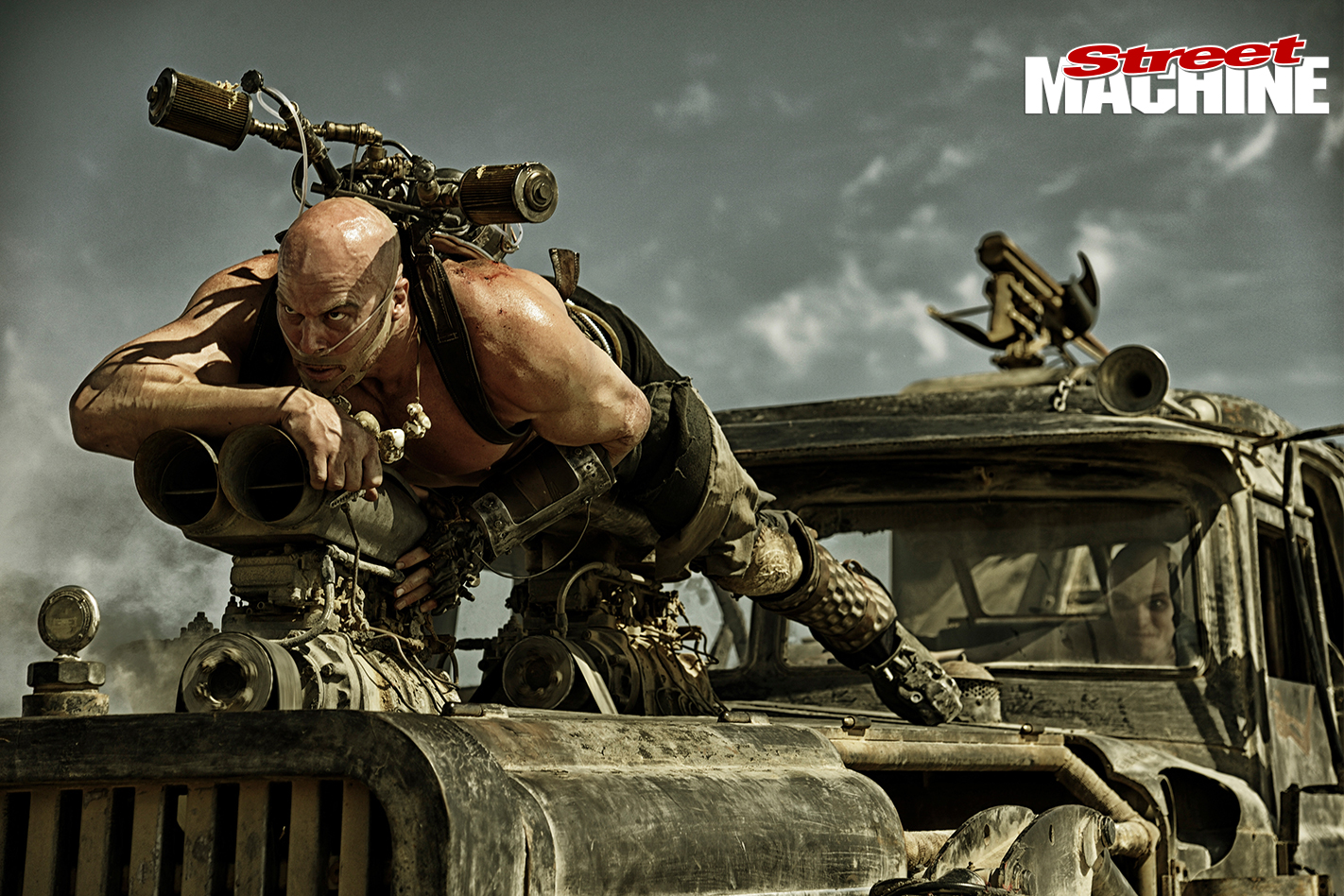 One of our favourite parts of the movie is when Rictus Erectus improbably rips a supercharger from the War Rig with his bare hands. Viva the absurd! 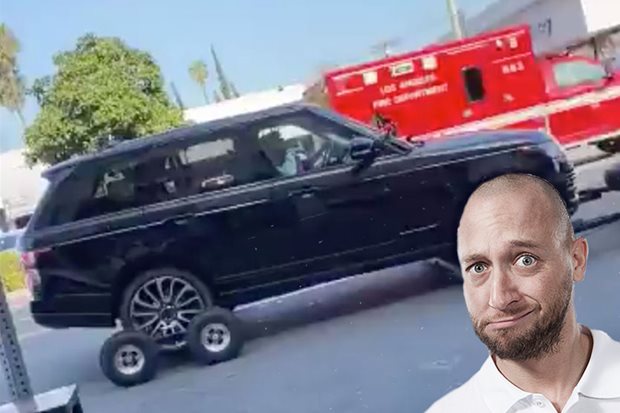