MARK Boxer is a man of many hats – stunt rider, cameraman, vlogger, former Street Machine writer, and now, builder of a 1000hp Barra-powered XH Falcon ute. But the ute’s journey from shitter to shit-hot was a tumultuous one – the battleship-grey beast pushed Mark to the end of his tether more than once – yet the result is a stand-out success. 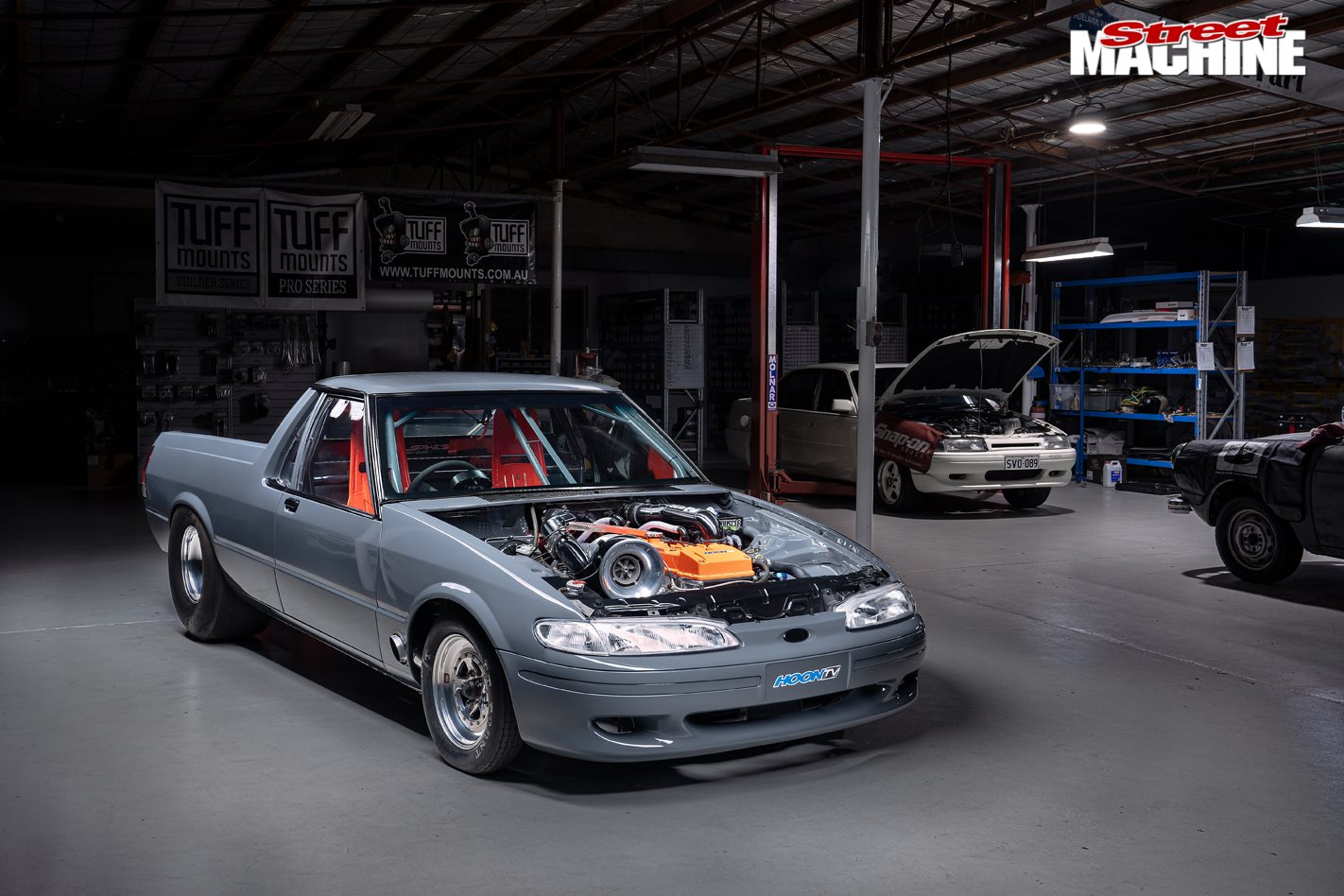 The story of his Falcon ute starts way back, not only in a different decade, but with a completely different magazine. “I was working in Sydney with the distinguished Andrew Broadley at the now-defunct Street Fords magazine,” Boxer begins after we meet up at an Adelaide coffee shop. “I was thinking of getting a BA XR8 ute as a project car.”

His search for Blue Oval ute-dom instead presented him with a very clean and original XH, the last of the ‘Blackwood’ Falcons. Hailing from the same era as the popular VR/VS Commodores, it passed Boxer’s single-pegger test, so a deal was done.

The ute was pressed into magazine duties soon after, with Broads and Boxer attending a Ford drag event in Victoria. “We were towing a trailer made from a BA Falcon ute tub,” Boxer recalls. “I can’t remember why or who owned it, but actually had a pool table set up in it. The ute ran a 16.4. Not with the pool table behind it, but.” Drag Challenge, eat your heart out.

Drag event behind him, Boxer ripped into the XH with the intent of simply making it cool, documenting the build for Street Fords. Pedders supplied a set of coil-overs, lowering the car nicely over 18-inch alloy wheels. “I was going to turbocharge the single-cam motor,” Boxer says. “I got a Garrett T51R for it; then affordable Barras started appearing in the wrecking yards.”

A local Ford wrecker got a frothy over the prospect of a Barra build, donating a non-turbo donk for the project. But the SOHC mill went to eBay rather than the engine bay and, in Boxer’s words, “it all went pear-shaped from there.”

With our coffees finished, it’s time to inspect this force-fed, multi-cam six-pot monstrosity. Boxer moved back to Adelaide mid-build, bringing the XH with him. Initially chipping away at it in his shed at home, he shifted the car to mate Jason Waye’s workshop as the project drew closer to completion. Jason’s Muscle Garage is strewn with tasty machinery; as we enter, I spy a V8 Sigma, a couple of vintage Sports Sedans, a very uncommon EA Falcon SVO and a stripped VW Type 3 fastback, all awaiting various degrees of attention. Parked incongruously between Jason’s famous Torana Sports Sedan and a stock-but-rare VN HSV SV89, there’s no doubt as to the intent of this great grey beast. Boxer says: “At some point I decided it wasn’t going to be a street car anymore. It was just going to be too mental.” 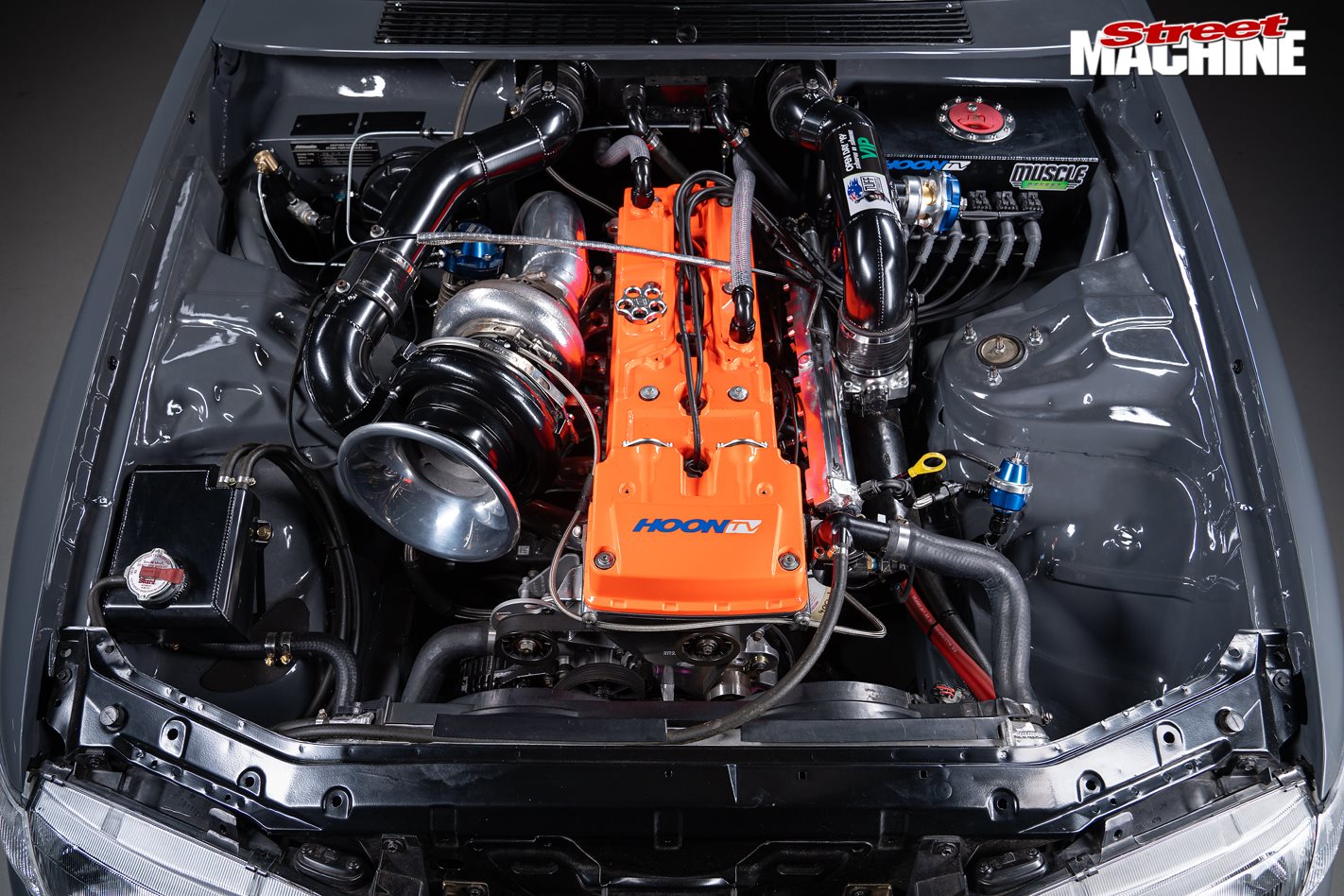 He’s not wrong; the half-grout-filled Atomic Barra block features the biggest studs engine builder Brad could summon. “Massive cams, Atomic pistons, race crank, all sorts of go-fast stuff,” Boxer explains as he gestures around the engine bay. “It’s got a big fuel system; 12 2000cc injectors, an extrude-honed FG Falcon plenum with a Hypertune throttlebody, triple Walbro fuel pumps in a custom tank and a water-to-air intercooler up here under the dash.”

Like any build, there’s always an aspect that offers more gremlins than the AMC factory, and the intercooler saga was perhaps Boxer’s AMC moment. “This is the third intercooler it’s had,” he says. “The first one was supposed to be a front-mount, but it took up half the room for the radiator, plus they cut up my rad support panel, which I didn’t want.” Being an ex-Ford mechanic, Boxer holds strong opinions on how a Ford motor should be cooled, and deleting half the radiator surface area isn’t one of them.

“The next one just wasn’t slick; pipes welded deep into tanks rather than butted to the surface. Not good for flow,” Boxer shrugs. “The third one is a charm, so I removed it all and bought a brand-new-old-stock rad support panel.” The NOS rad support panel and front bar have been mildly modified; four bolts and ‘it’s easy off – bam! And the bar is gone’. Perfect for a quick trackside engine swap if something grenades at a meet.

Although Boxer did a heap of fabrication work himself, he had plenty of help along the way. Craig Williams at Mad Performance was instrumental in setting the firewall back about five inches, liberating real estate for a subtle dump tank behind the engine. Down the back, Boxer assisted talented race car builder Luke Szkoruda to reset the rear rails further inboard and fashion tubs to suit. Luke and Boxer also formed up the rear sheeting and hung an unbreakable Currie Enterprises 40-spline nine-inch off a set of ladder bars, but not before additional bracing by Zagari Engineering. 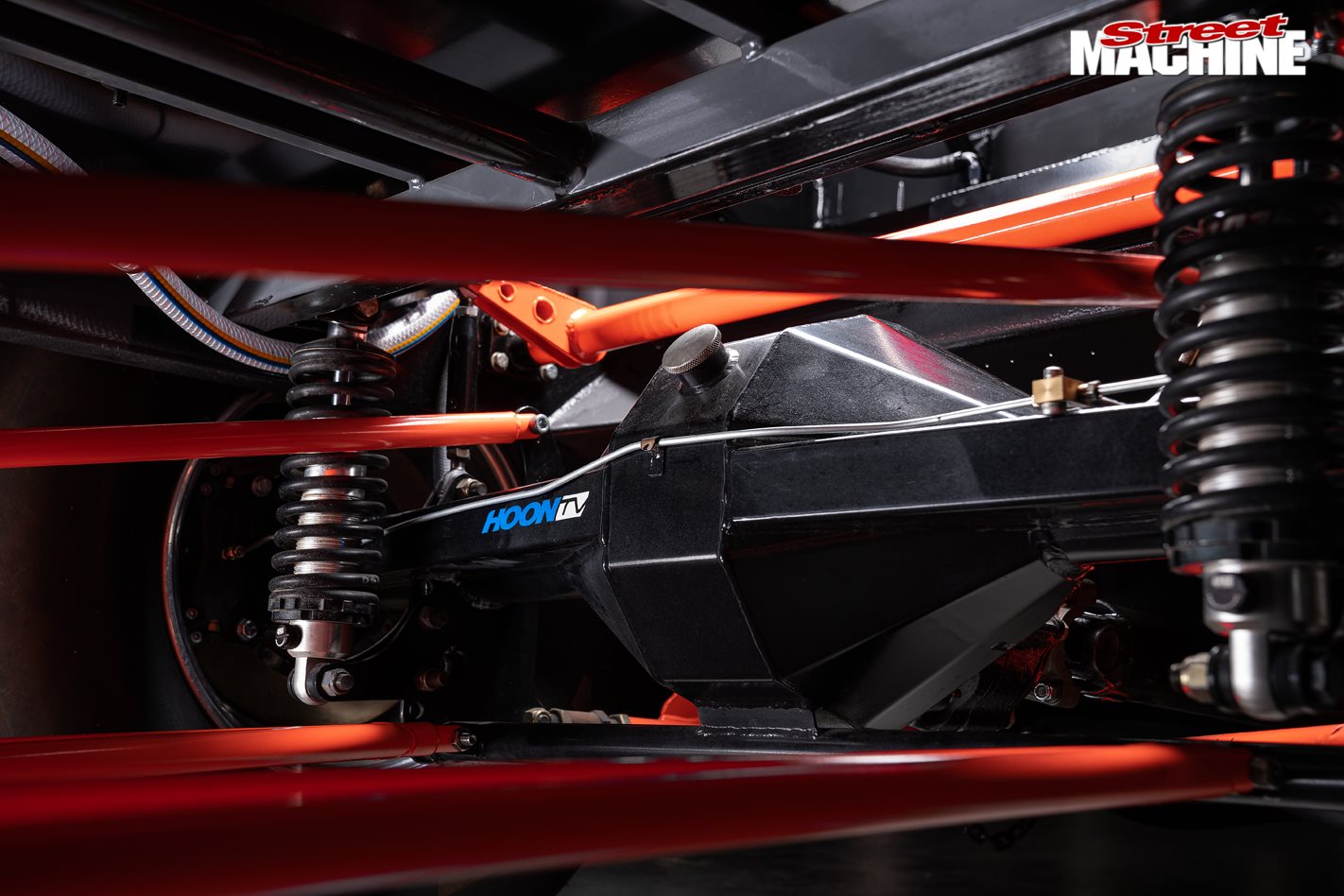 Former mechanic Boxer now works mostly as a TV producer and cameraman, running HoonTV. He is quick to extol the virtues of social media as a motivating force to keep chipping away at the build of his XH. “Occasionally, I’d decided I was done with the car, over it,” he says. “Then I’d get a bunch of friends on social media talk me out of quitting. Then Telfo said he wanted to feature the car when it was finished; well, I turned into a man on a mission.”

The well-wishers pushed Boxer to complete the car, but he’s decided that after a decade of toil, the Falcon must go. “I was more into cars when I started; I was younger,” he admits. “Bikes are more my thing now.” 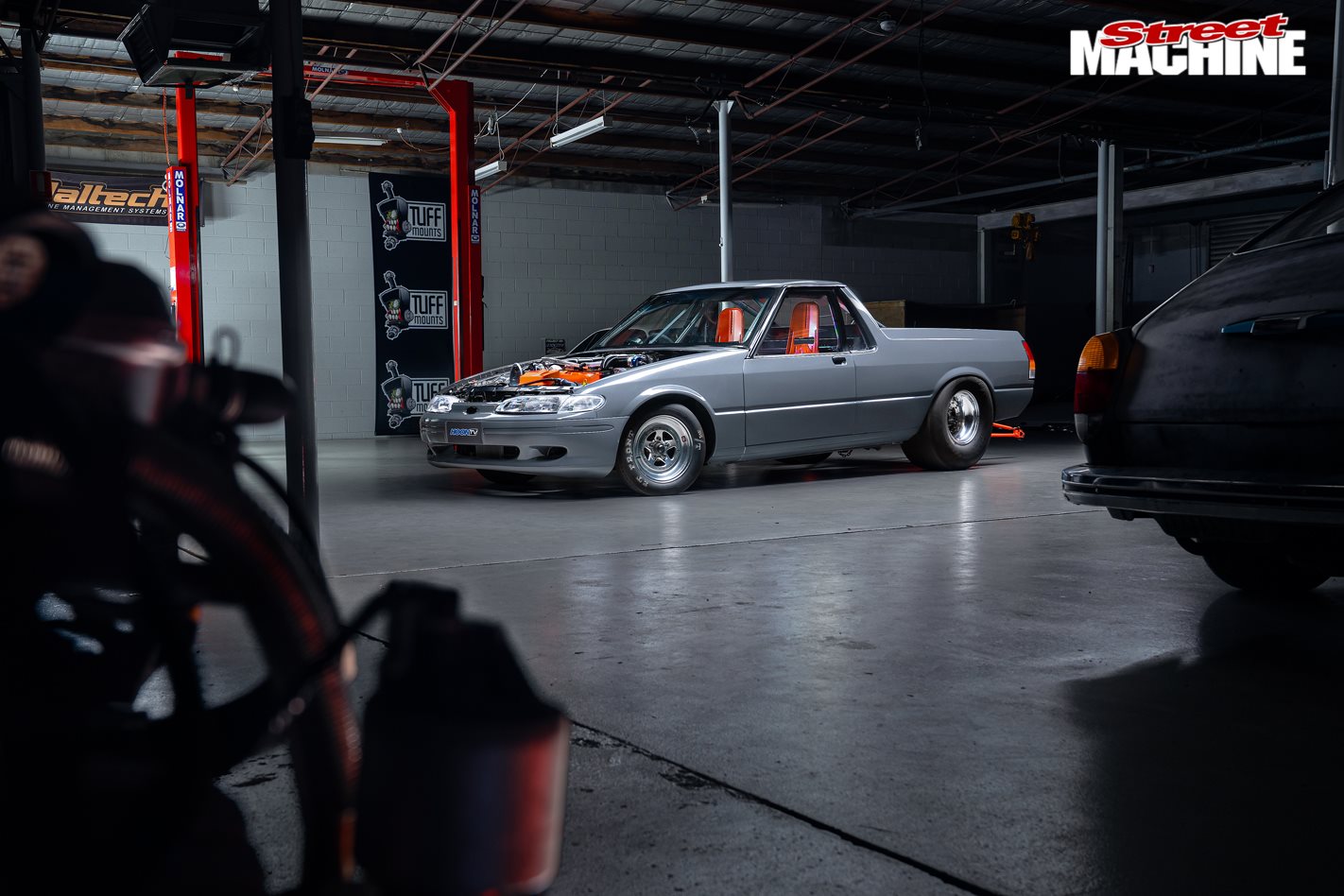 Exiting the building, he goes to hop into a cheap-and-cheerful Navara. I ask Boxer what happened to ‘Frank the Tank’, his trusty Land Cruiser, and he replies sheepishly: “It’s in getting some work done.” When I push him as to what, it turns out some significant body mods and an LS conversion are on the cards, with a view to getting it to Summernats in January. Yeah, not into cars much these days, Boxer? We can’t wait for that one; word is that Frank the Tank should only take a tenth of the time the Falcon did.

SINCE our coffee catch-up with Boxer, he’s had the XH shipped off to Garage 7 Performance & Dyno to run the engine in. ECU guru Declan tried to work his magic with the Haltech Elite 2500, but the hub dyno didn’t want to play with the shortened diff. Kahli and Tom from Custom Importz stepped in to help, granting Boxer and Declan some time on their chassis dyno to get the tune done. 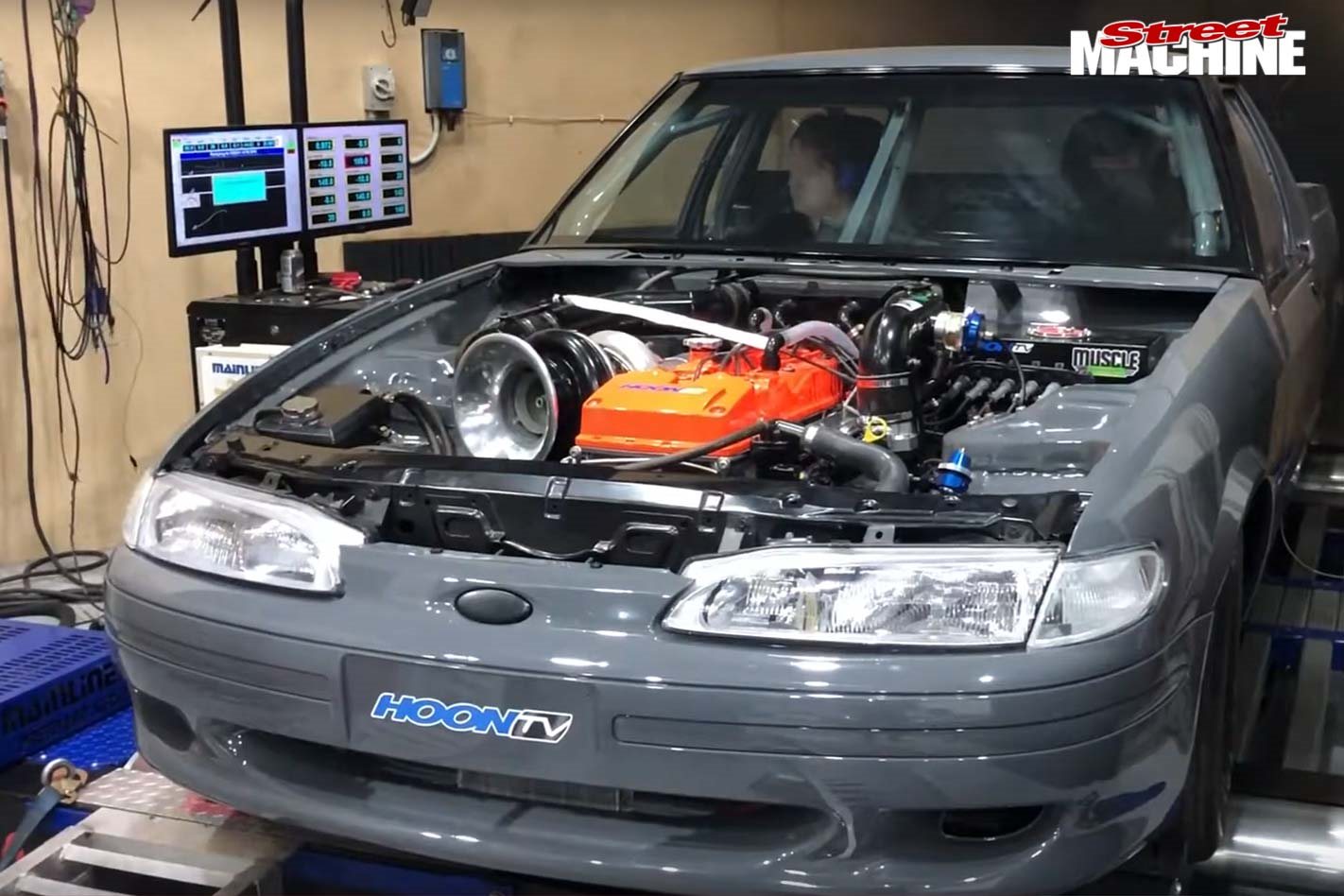 Running 25psi of boost and activating only six of the 12 injectors, the Barra showed a great deal of promise. Struggling to keep the car from spinning on the rollers, Declan couldn’t extract an exact figure, but estimates around 800rwhp at 6000rpm. Not too bad given the amount of injectors, rpm and boost left! With the Atomic Barra built to cop 50psi, there’s plenty more party to be had. 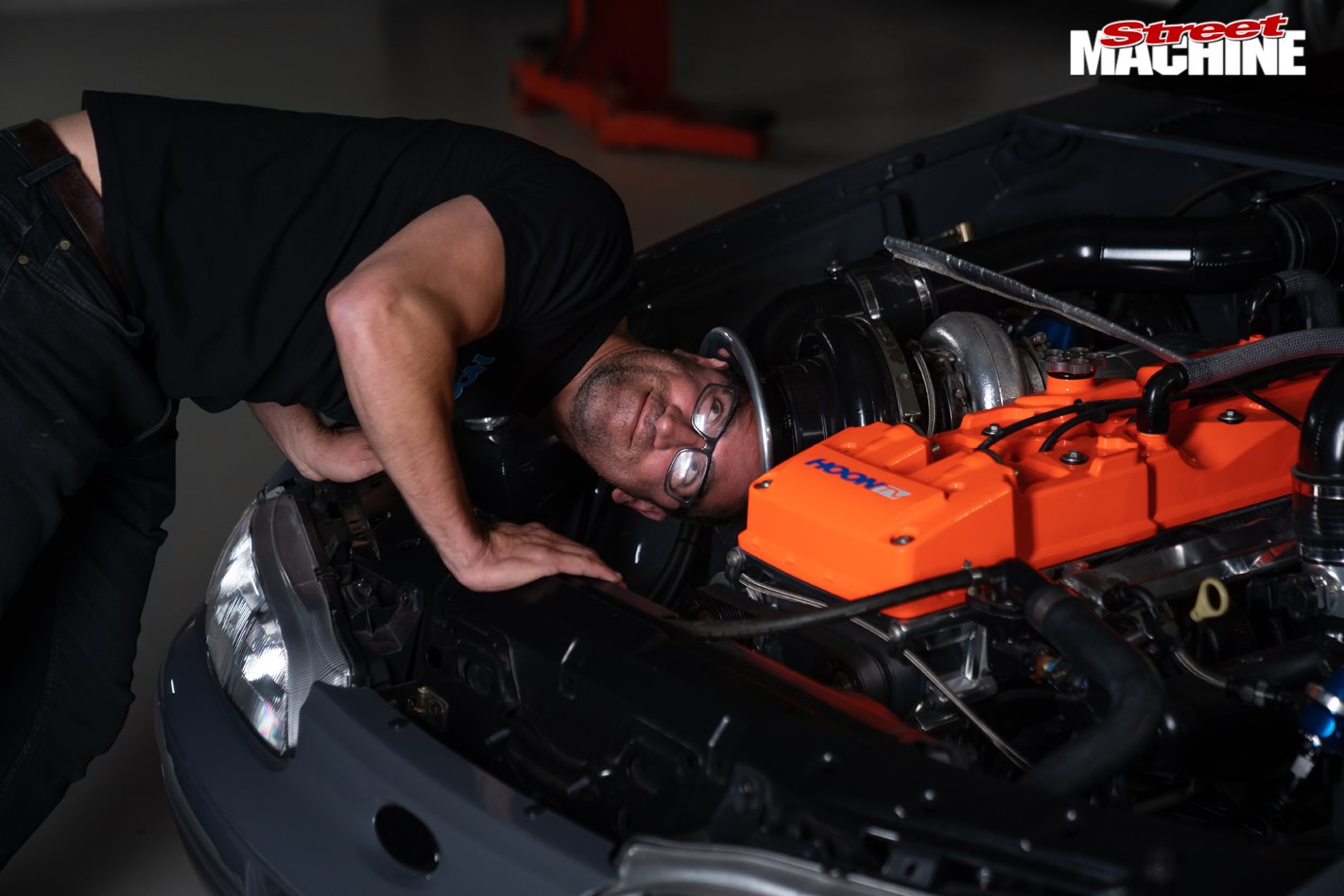 Boxer is a familiar face at car events; he’s a producer on the Discovery Channel’s Summernats TV show, and recently spent a few days running up and down pit lane during Fox Sports’ Supercheap Bathurst 1000 coverage. His HoonTV commitments mean the man barely has time to drag race, so if you feel your life would be complemented by a battleship-grey, 1000hp turbo Barra-powered XH Falcon drag car, hit Boxer up via the HoonTV Facebook page or at boxer@hoonmedia.com 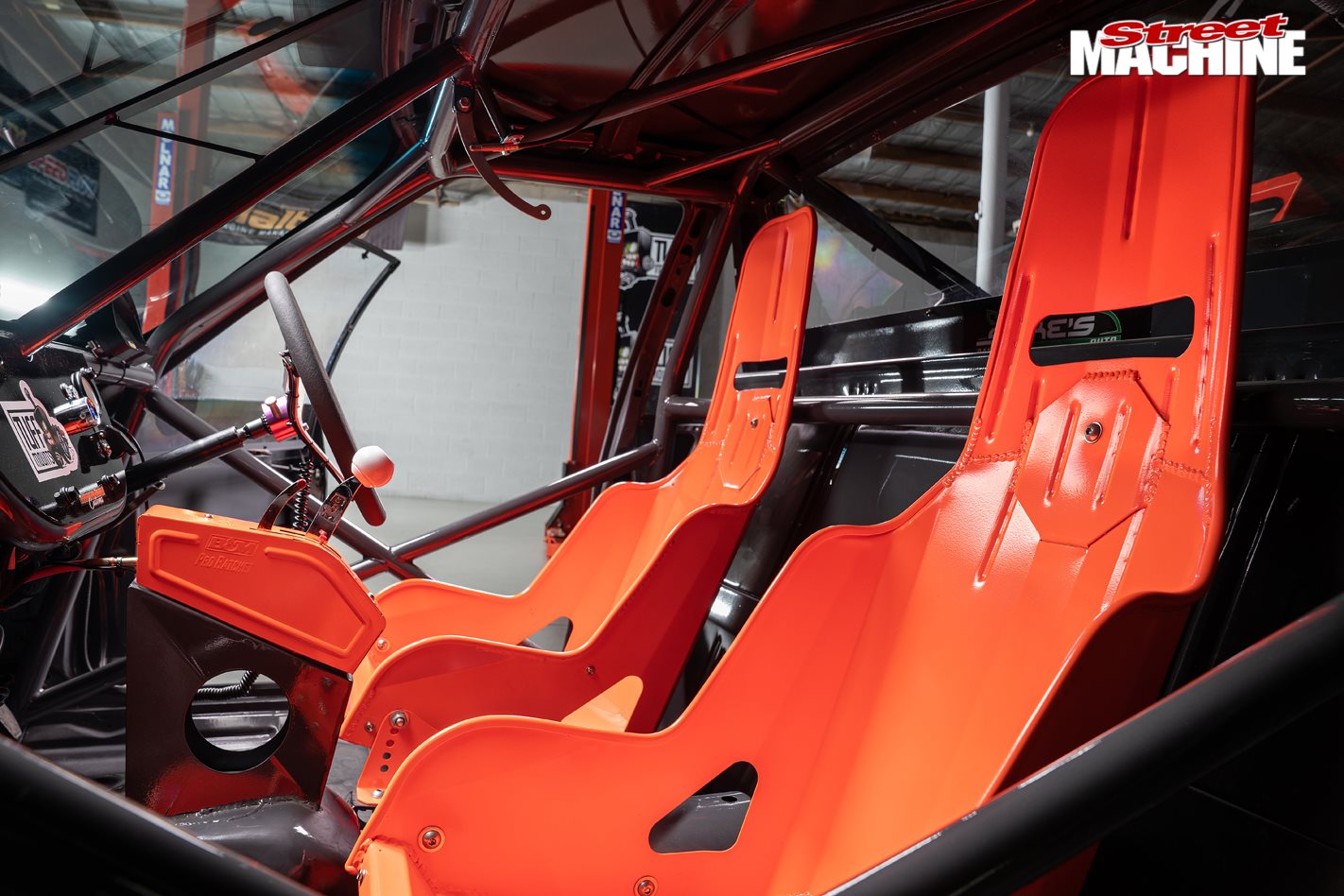 Boxer wanted a serious rollcage to ensure he survived any on-track catastrophes, but having cut his teeth building hardcore off-road vehicles, fabricator Luke Szkoruda took it a step too far. “The centre bars are probably overkill, but Luke originally sheeted in between the first and second bars,” Boxer says. “Dude, it looks cool, but if I’m staging in the right-hand lane, I’m not going to be able to see the Christmas tree!” 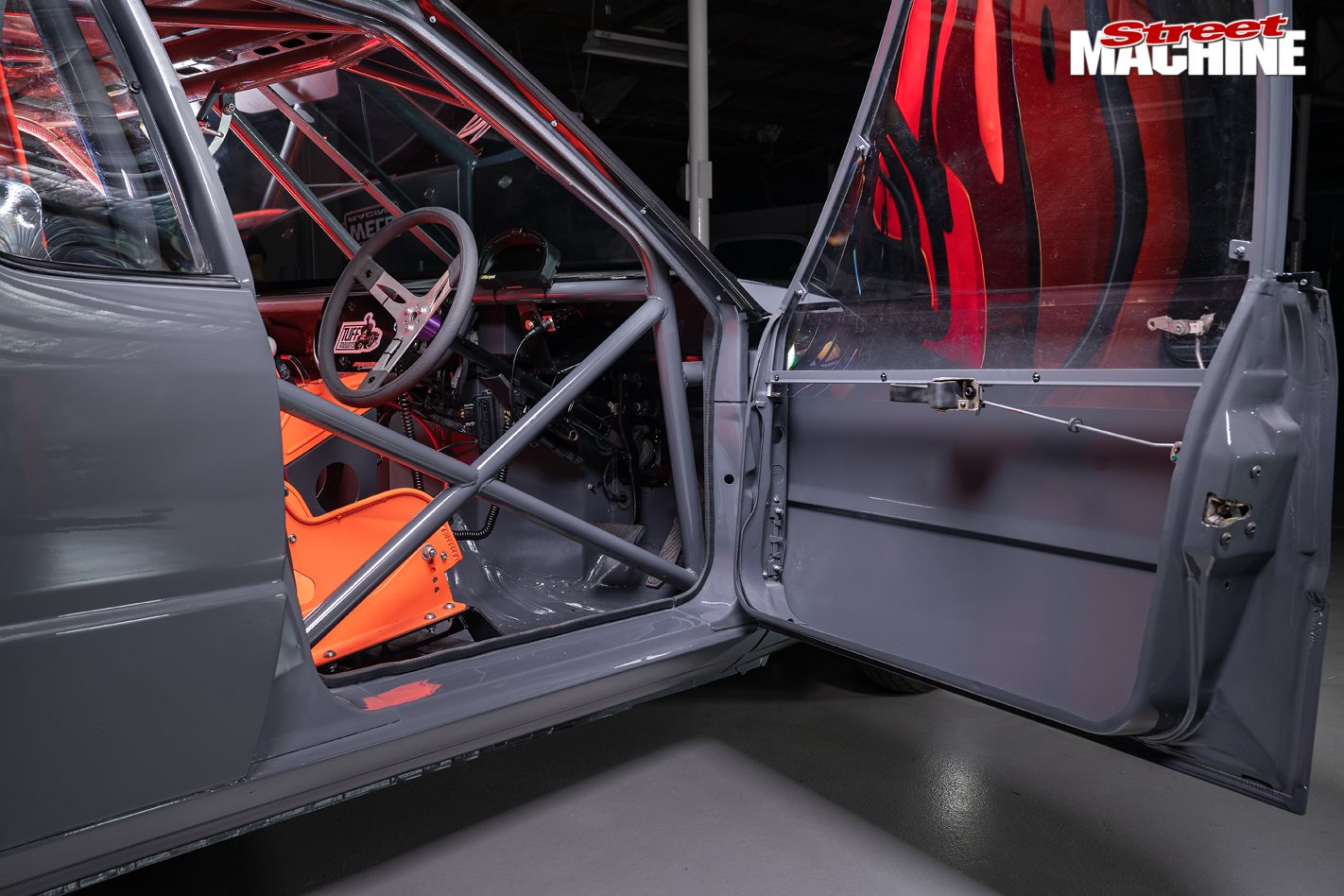 Boxer bought a set of aftermarket fibreglass doors for the ute, but they were wobblier than a politician’s promise. “I got the original doors, cut out the side intrusion beams, gutted everything else and put some bars in there to retain the plastic window and standard handle mechanisms.” His work took 15kg out of each door, while retaining the factory-fresh steel skin 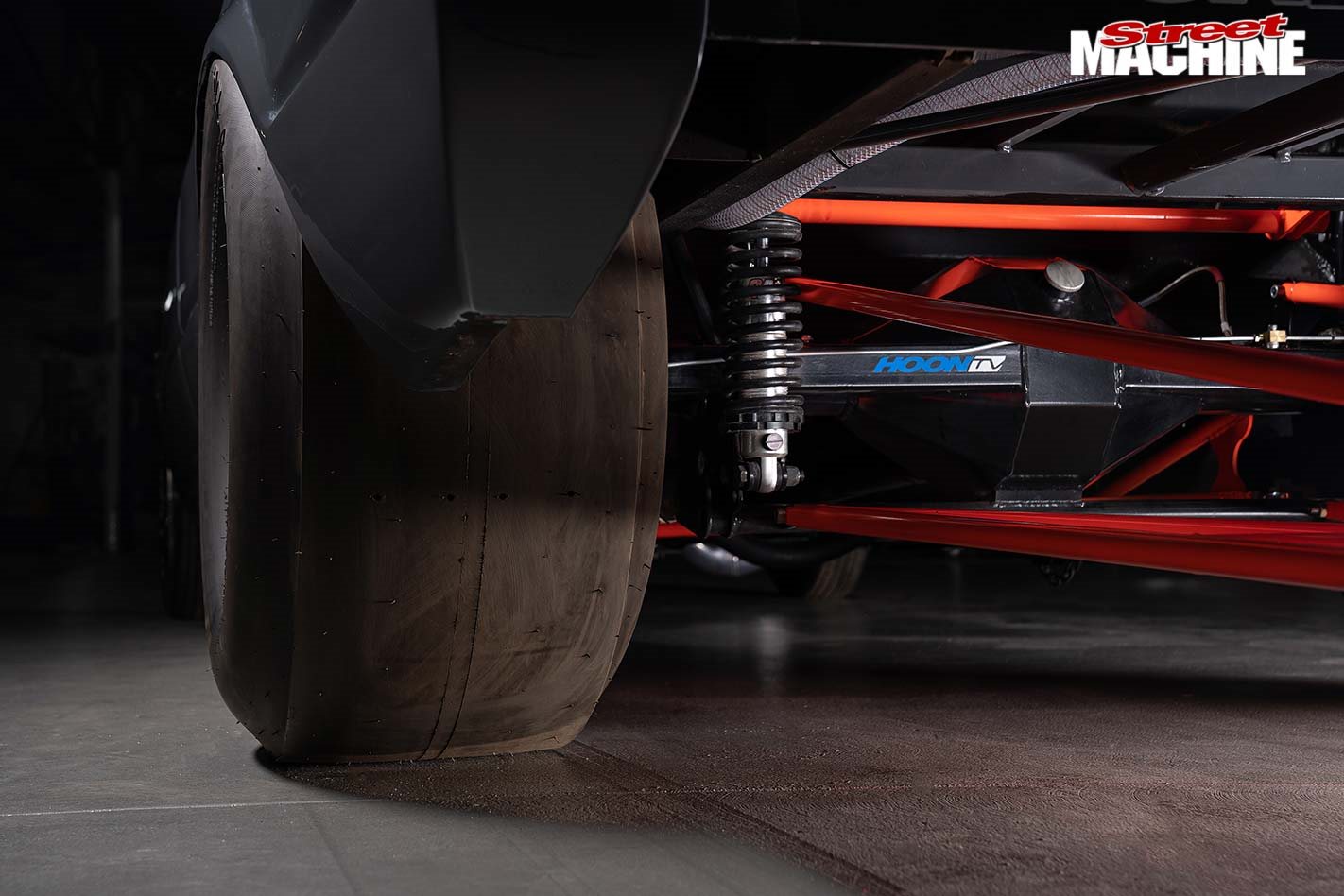 Wanting to maximise the rear tyre size to ensure the car complied with multiple race classes, Boxer admits that the ute does sit up a bit high. Although the big 33x10.5in rubber meant the quarters had to be cut and stretched, the result is worth it 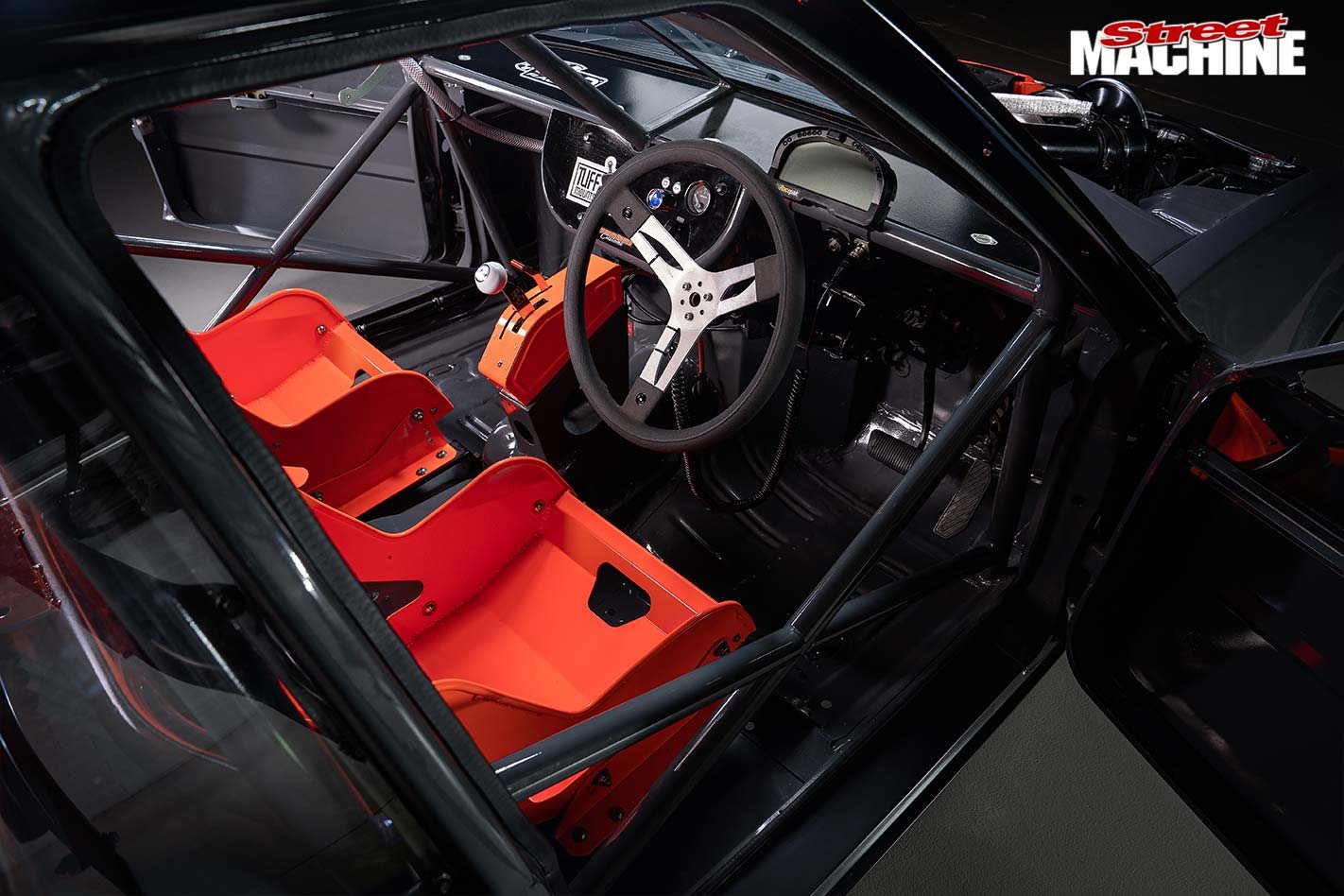 Boxer originally installed a bunch of Auto Meter gauges, but then swapped them out for a Racepak system. The lightweight steering wheel is fitted with buttons for the transbrake and line locker, and is attached to a modified Falcon column, which even retains the factory reach and height adjustments. “All the mod cons,” Boxer laughs, before bruising his kidneys on the orange Kirkey race buckets. “I might put the covers on next time; they’re padded and actually pretty comfortable to sit on” 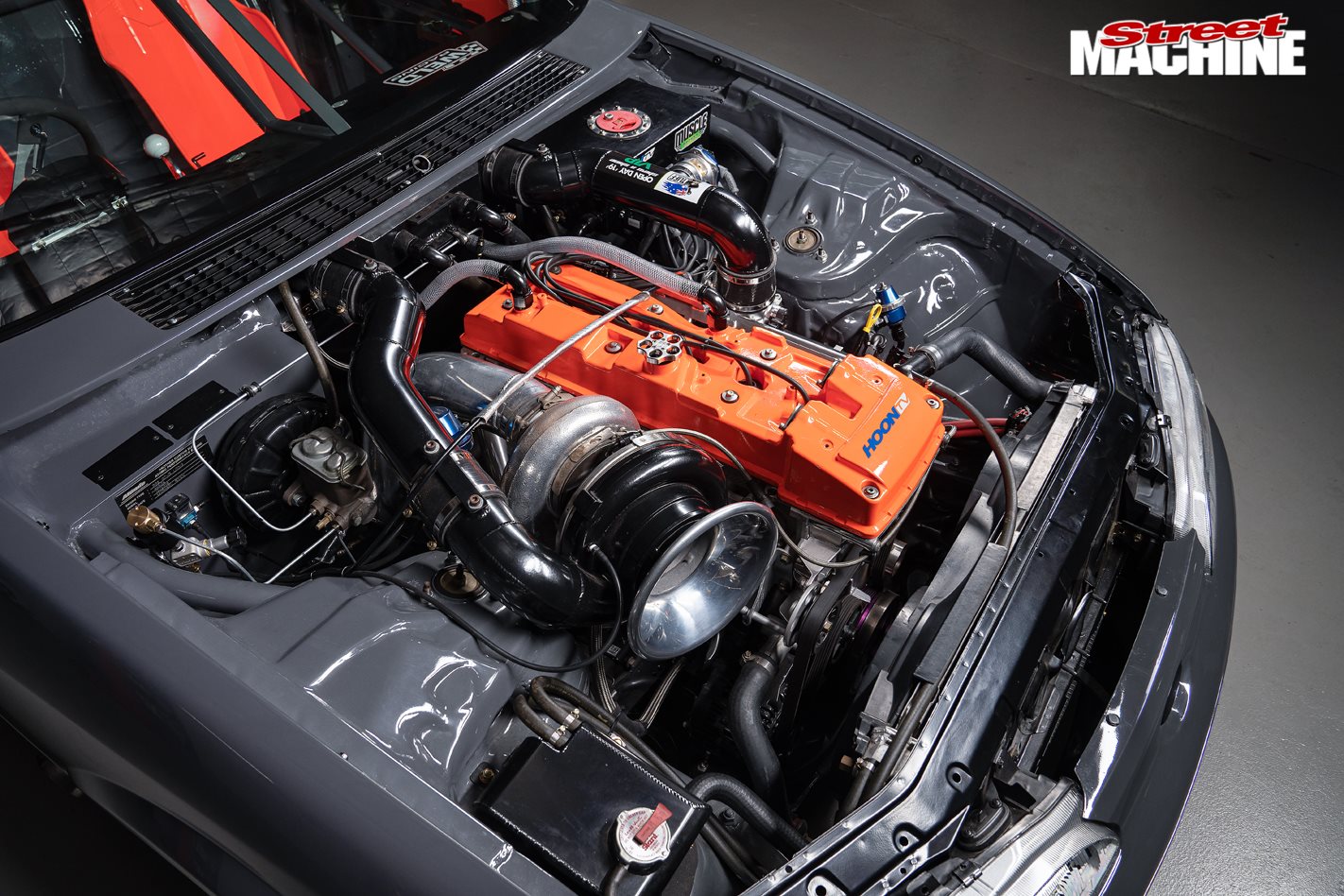 The twin-cam Barra takes up plenty of engine bay, complemented by the GT47/48 Garrett turbo that is officially as big as Boxer’s head. Behind the mill is the overflow tank, which has a larger capacity than the custom baffled sump. Should the laws of physics somehow fail, excess oil flows via pipework attached to the rollcage to be deposited behind the back wheels and well out of danger. The tank in the passenger-side corner is for the water-to-air intercooler. A Davies Craig pump keeps the water flowing from the tank to the heat exchanger up the front

Exhaust: 4in turbo dump and side-pipe

Cameron Lees at Solid Mechanical & Engineering; Jason at Tuff Mounts; Rob aka Spike; Mike at MV Automatics; Craig Williams at Mad Performance; Nic, Stewart and the team at Turbosmart; Greg, Richard and Scott at Haltech; Currie Enterprises; Rob and the gang at GCG Turbochargers; Scotty and the lads at Edwardstown Powdercoating; James at Groove Ryder Fabrications; Ceramic Coat Australia; Kyle at 6boost; Mark and Pete at Hypertune; Torque Converter Engineering; Brad Girdwood at Atomic; all my Facebook friends who put up with my posts when I’d had enough – they talked me out of quitting 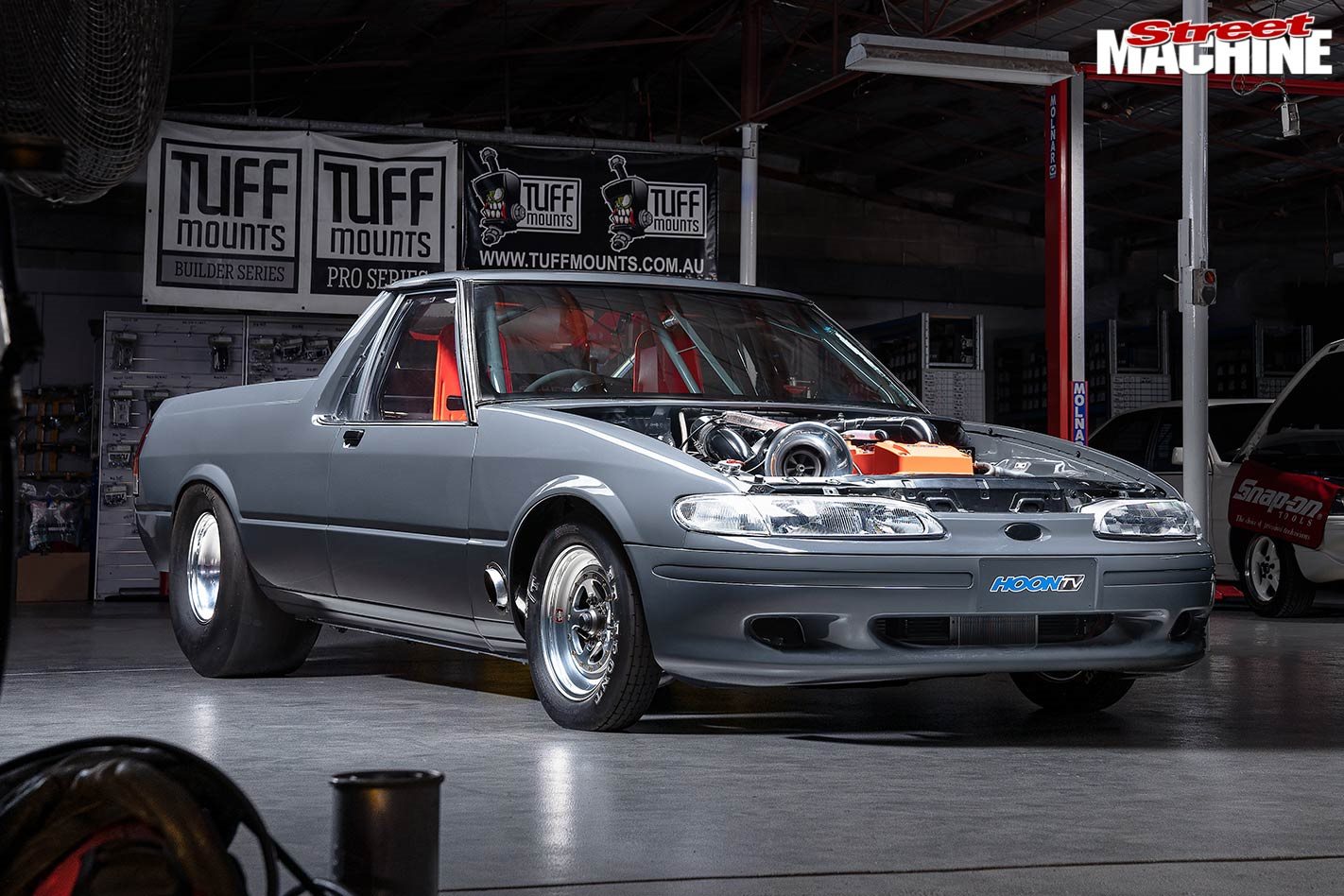 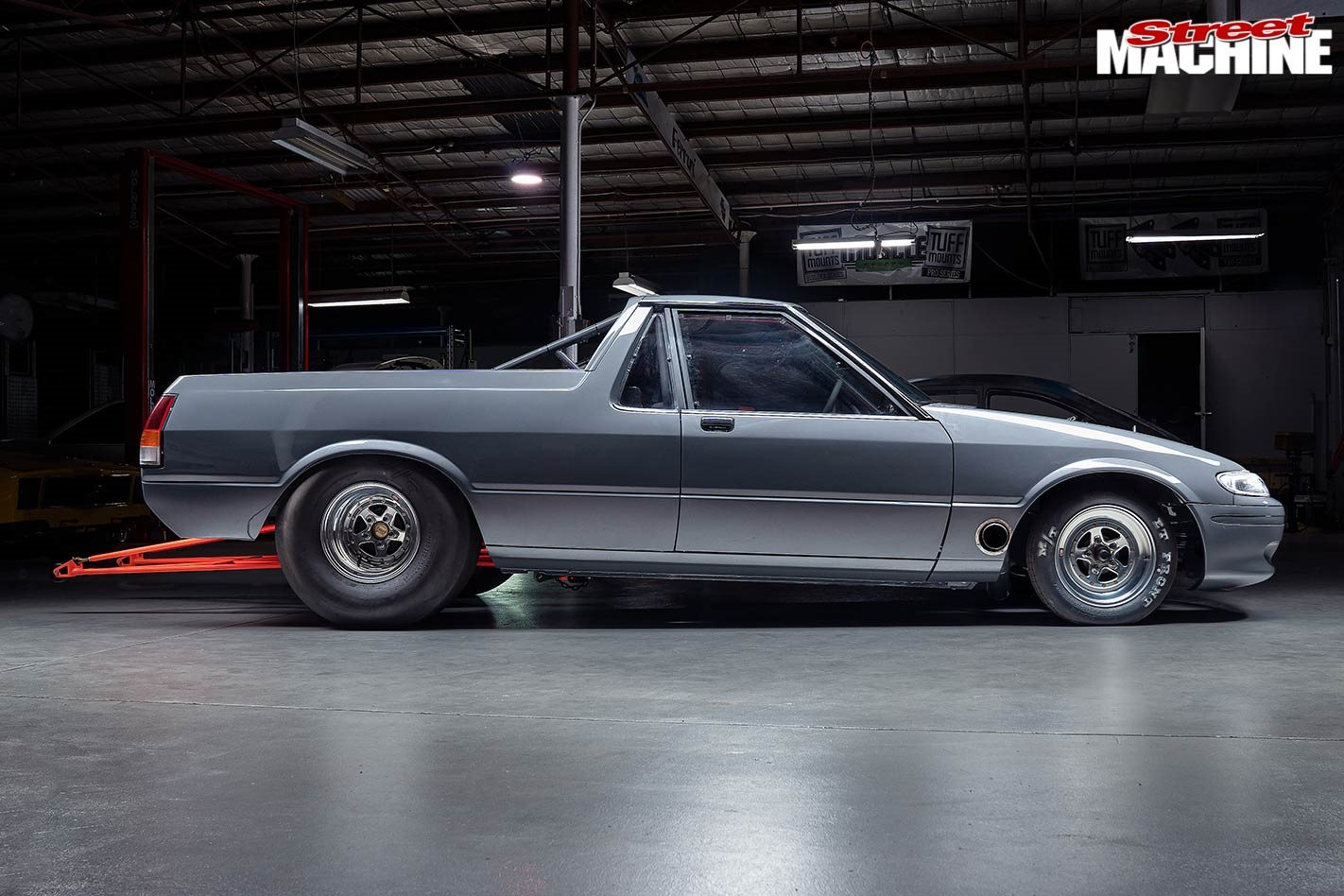 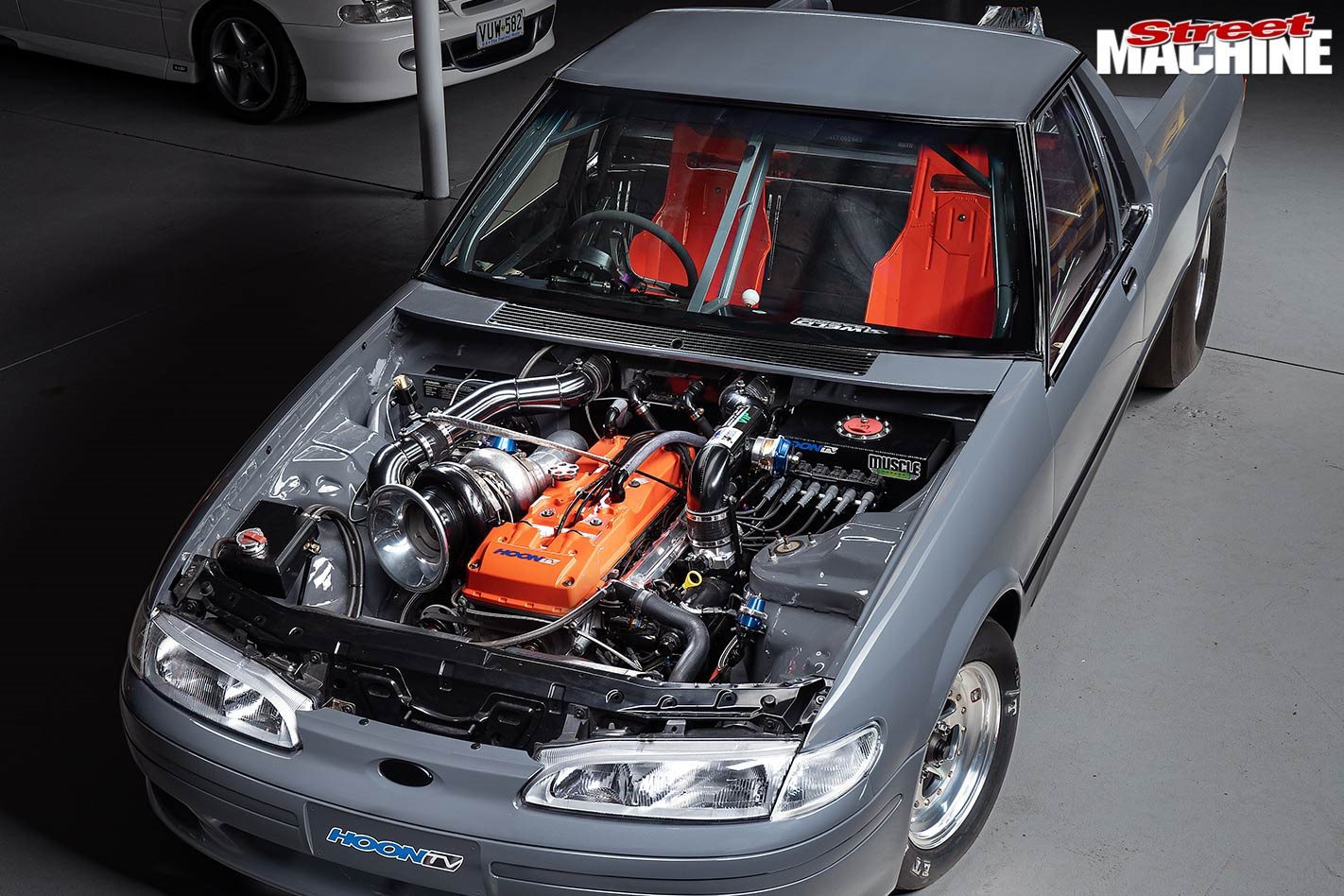 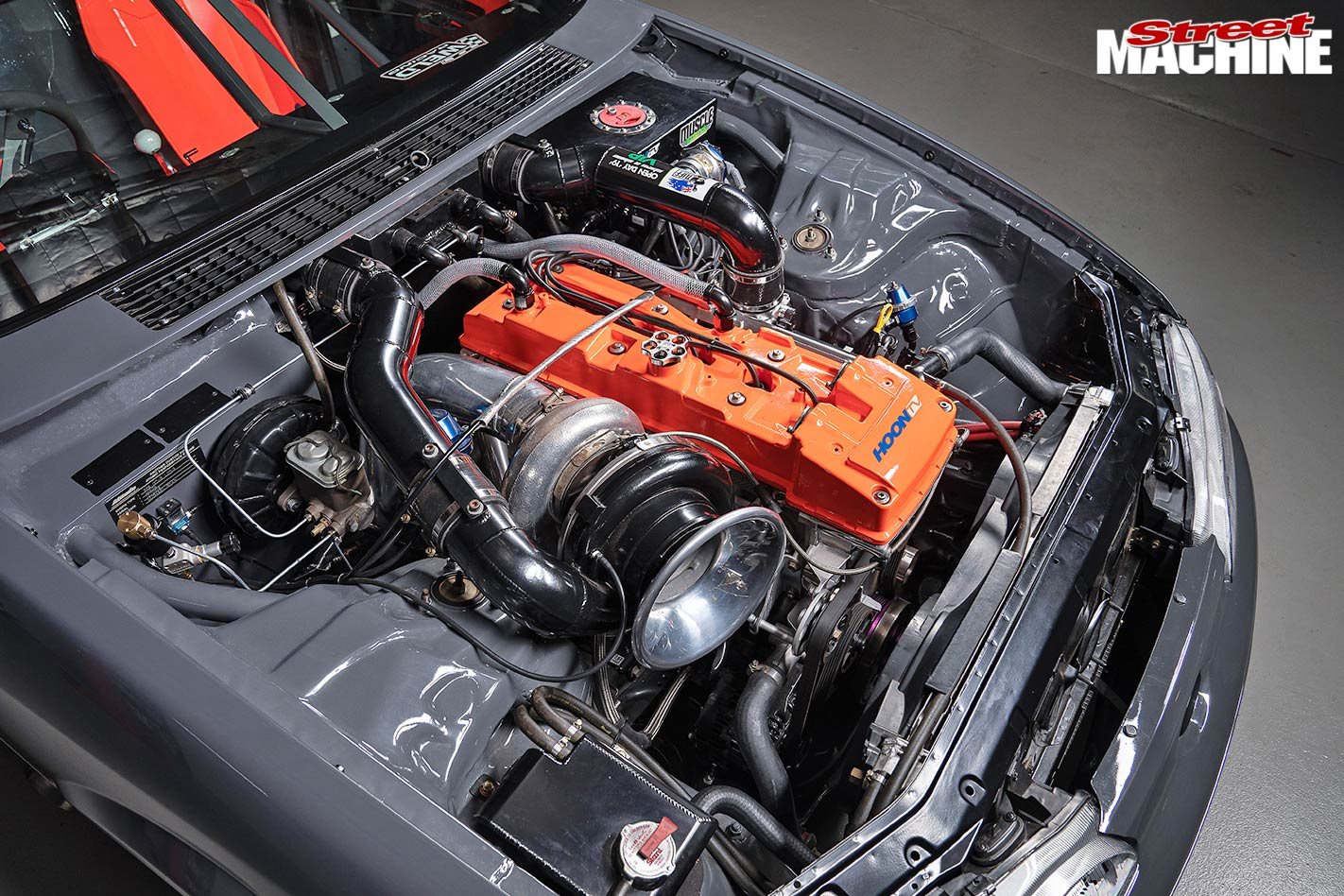 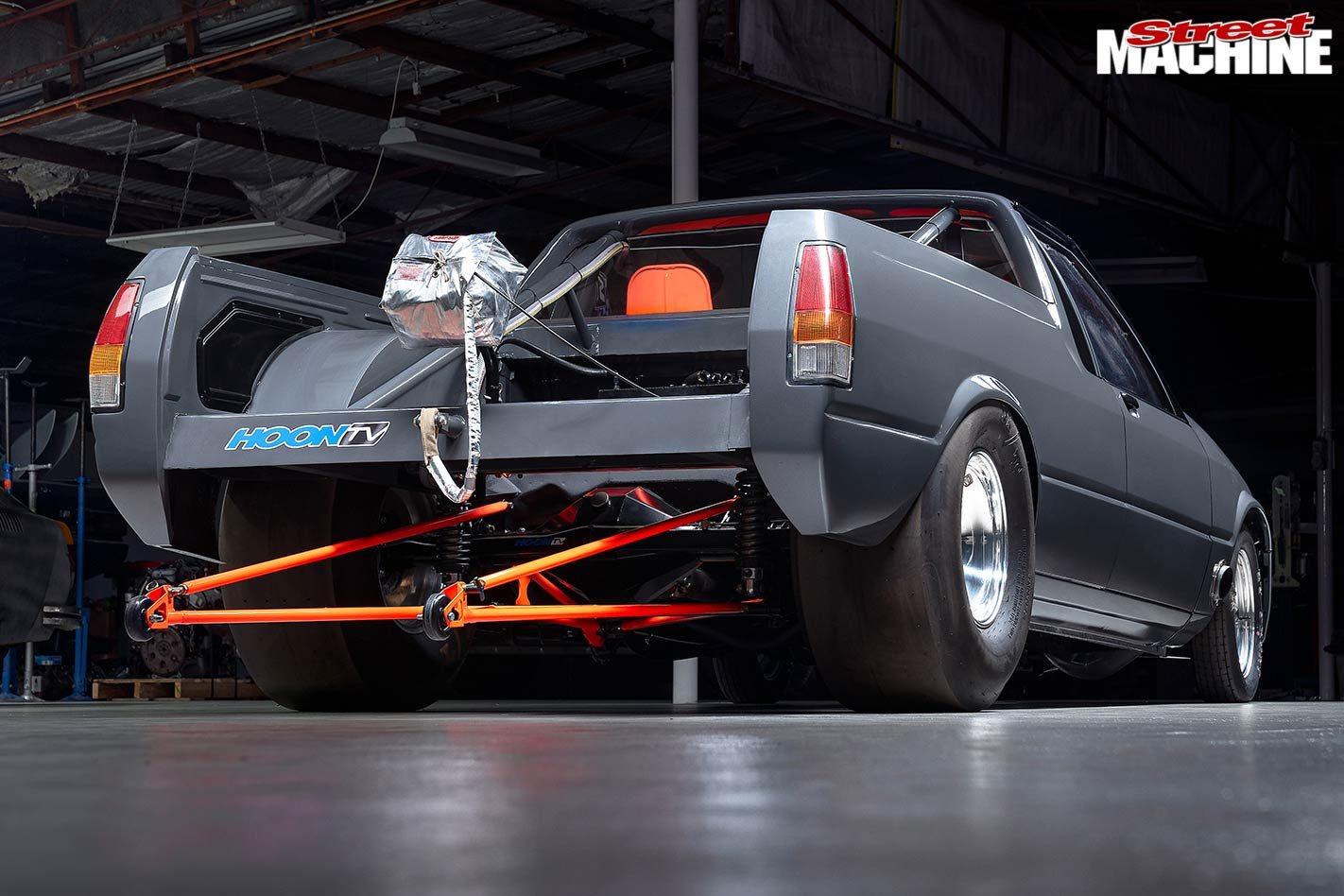 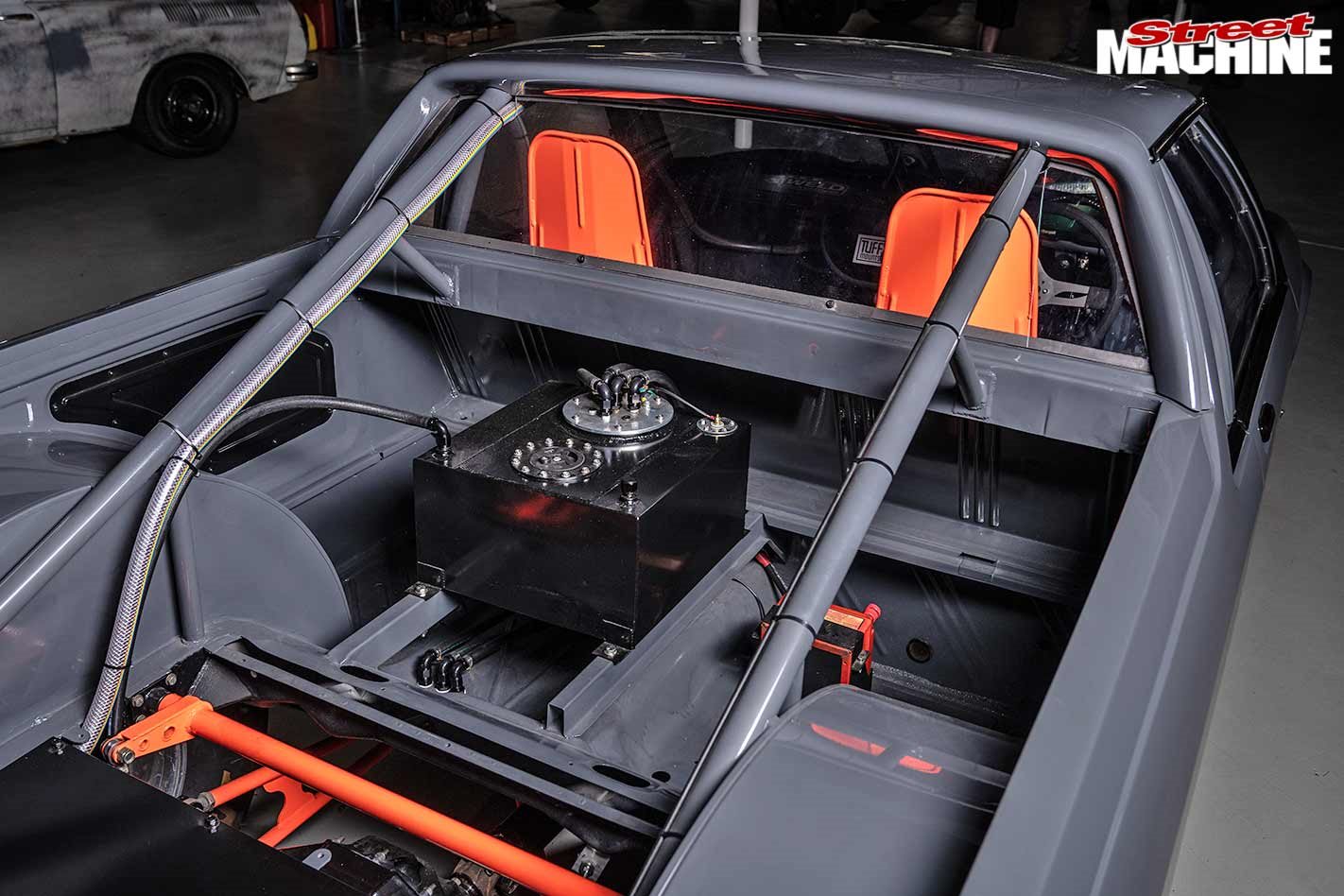 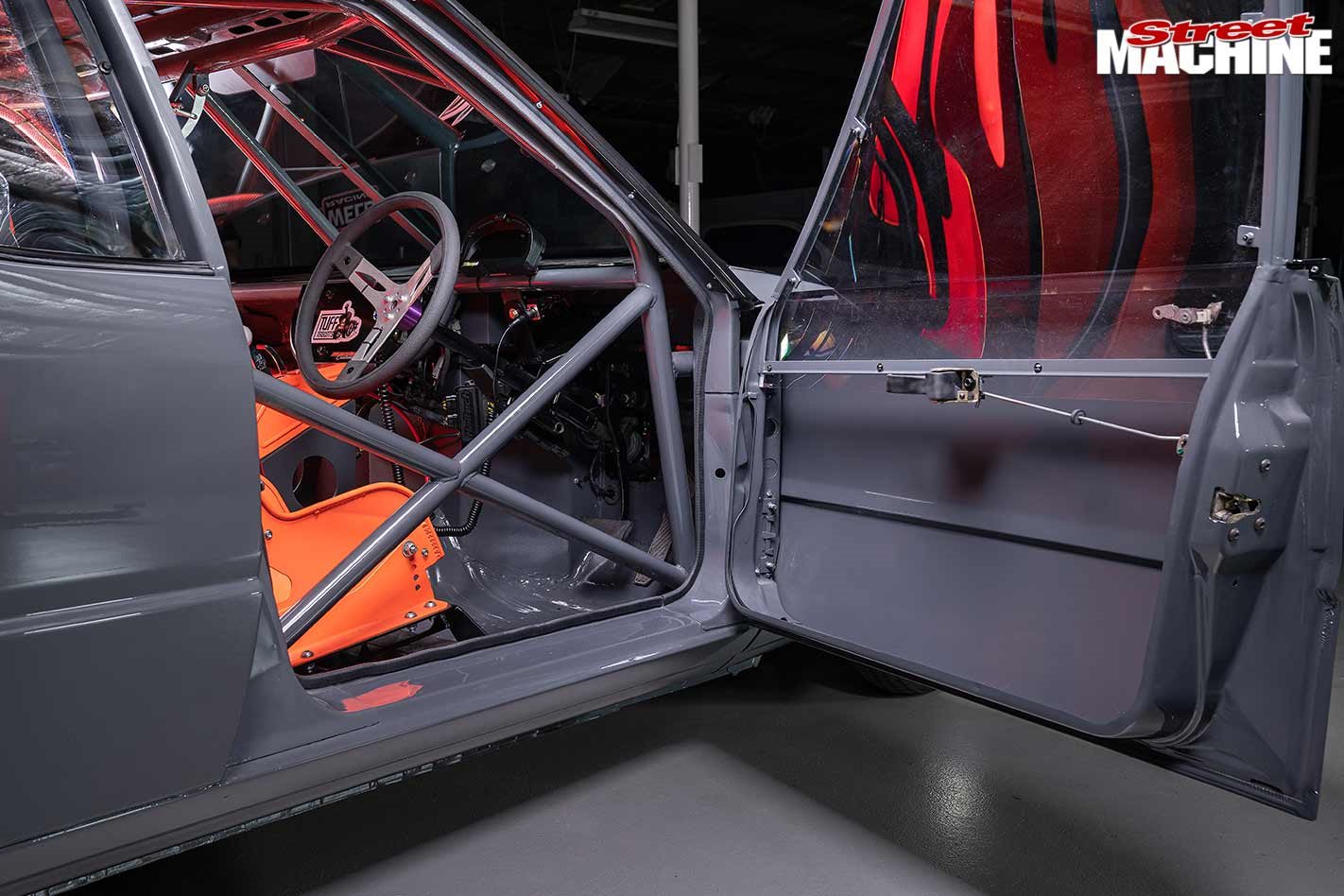 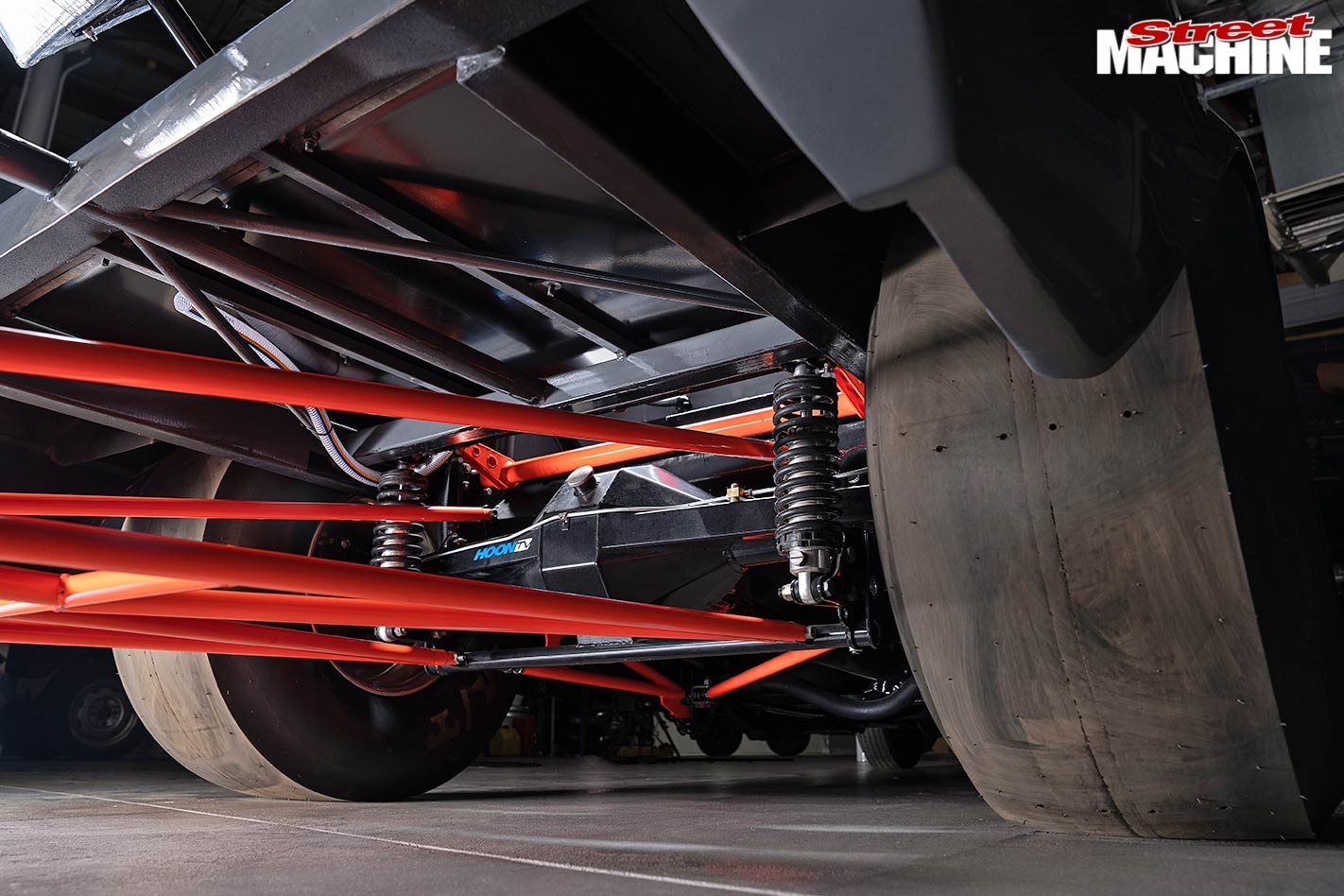 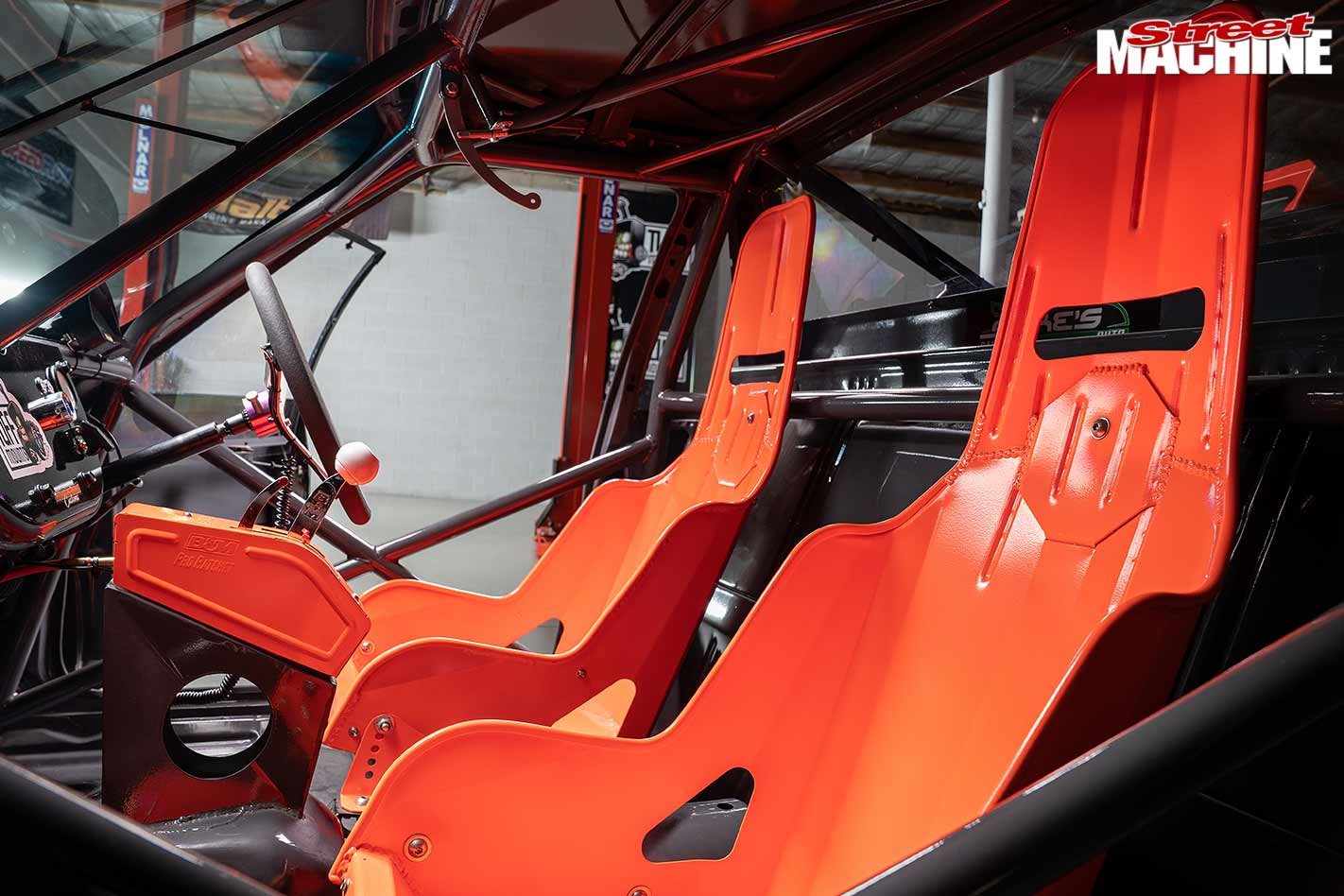 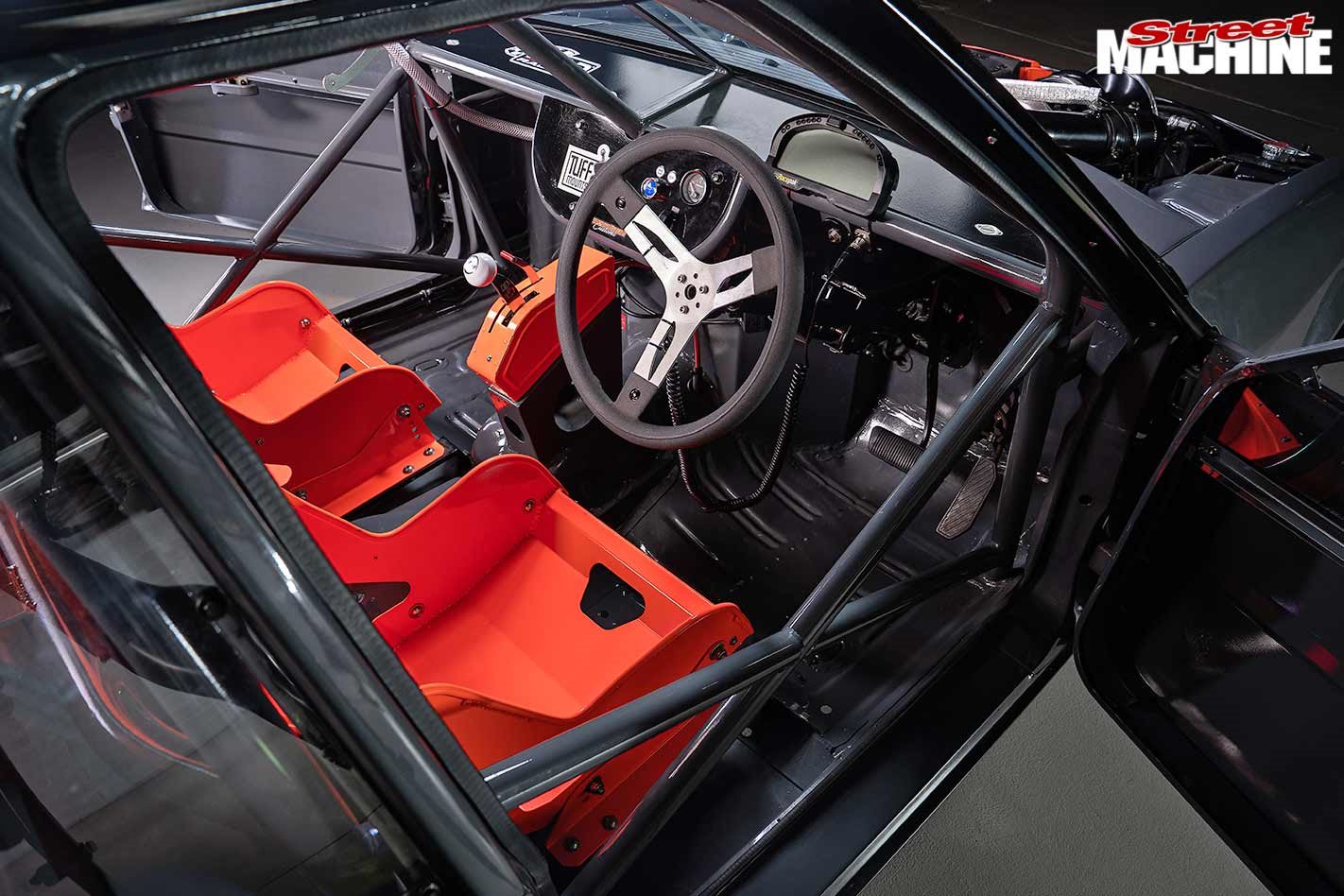 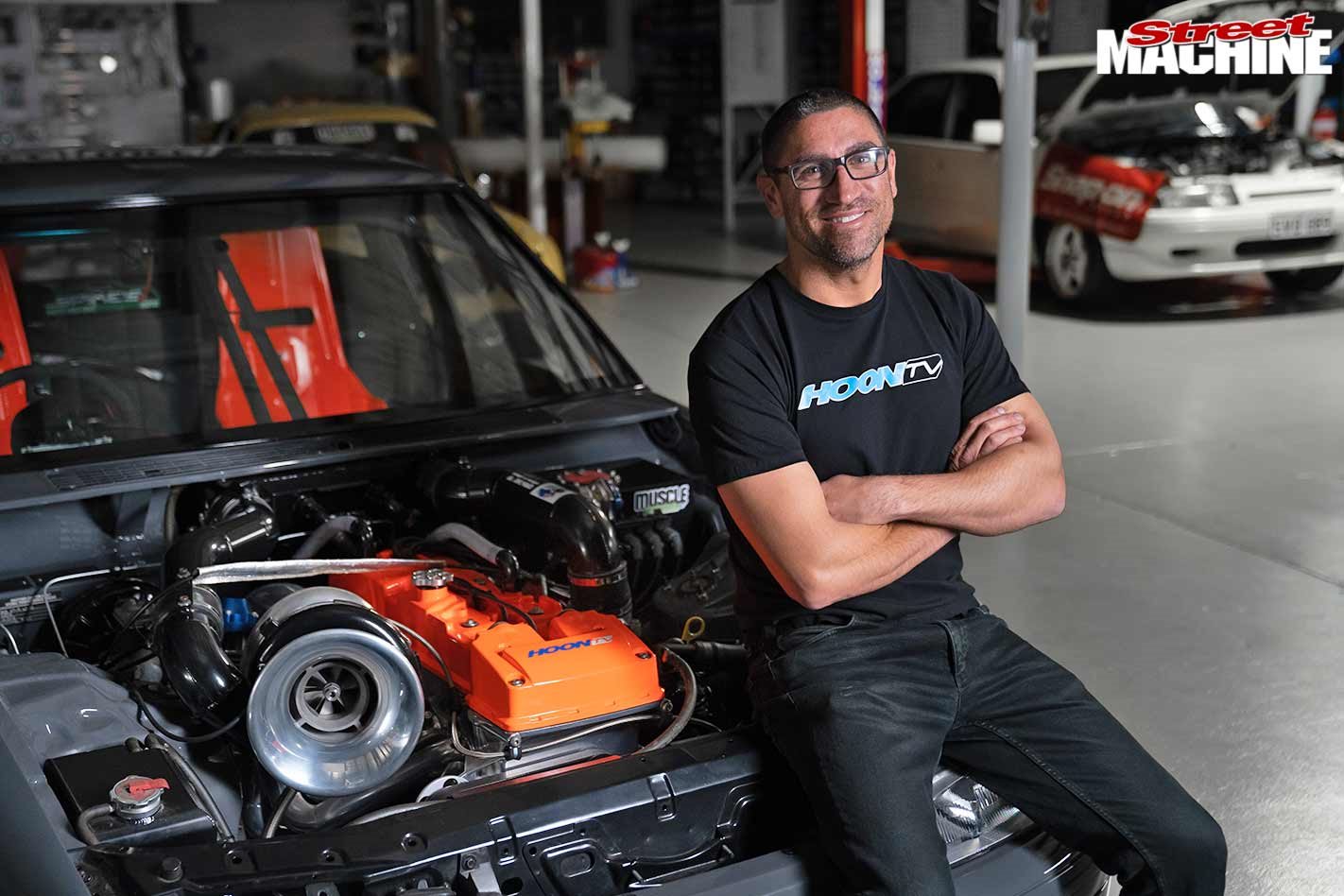