BANG for buck, nothing for sale locally can compare to a USA-built car. Around US$100,000 will buy you a car that would cost $250,000 to build in Australia, and it will generally come with a tune-up and a bunch of track time that has it running in the sweet spot before you even jam your arse in the saddle. In real terms, to buy a twin-turbo Outlaw Radial car that can run into the 3.80s over the eighth, with a quality chassis and a decent engine like a 481X, would cost US$330,000 (around AU$445,000) from start to finish. Yep, it’s a ton of coin, but what you get will be the ride of your life in a car that is built to absolute perfection. 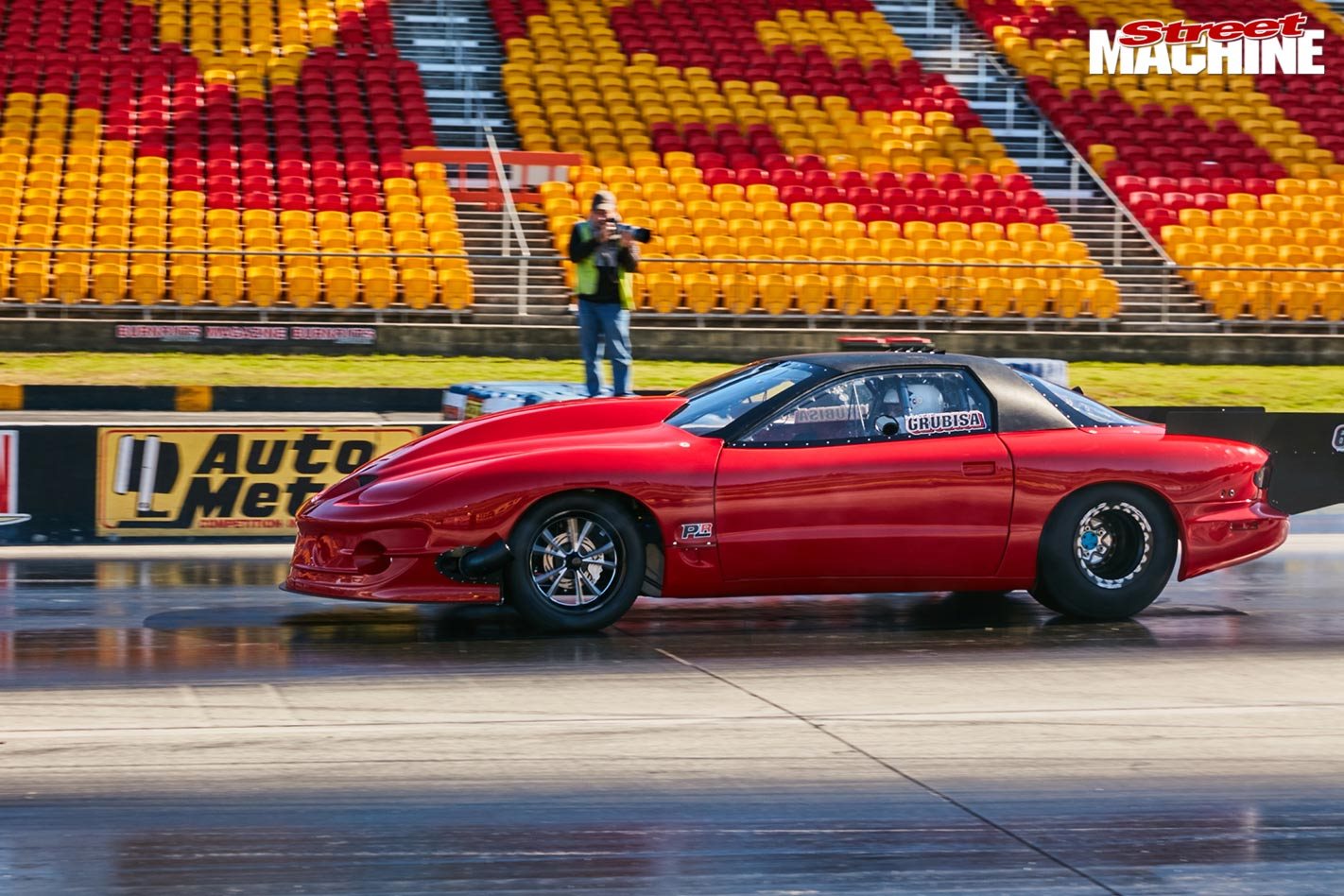 It’s something that Sydney radial racer Matt Grubisa has discovered for himself. For a few years he campaigned a twin-turbo Gen II Camaro, which he then traded in on a 1966 Nova with a PSI-blown Hemi. That deal was short-lived as he just didn’t have the people around him to make it fly. So the Nova went up for sale and he went to the States in search of a car that would take him to the front of the Outlaw Radial field.

“I was talking with Eric Dillard from Pro Line in the US, who told me the only quality car for sale was the 2004 Pontiac Firebird of Chris Daniel, so we organised to take a look,” Matt says. 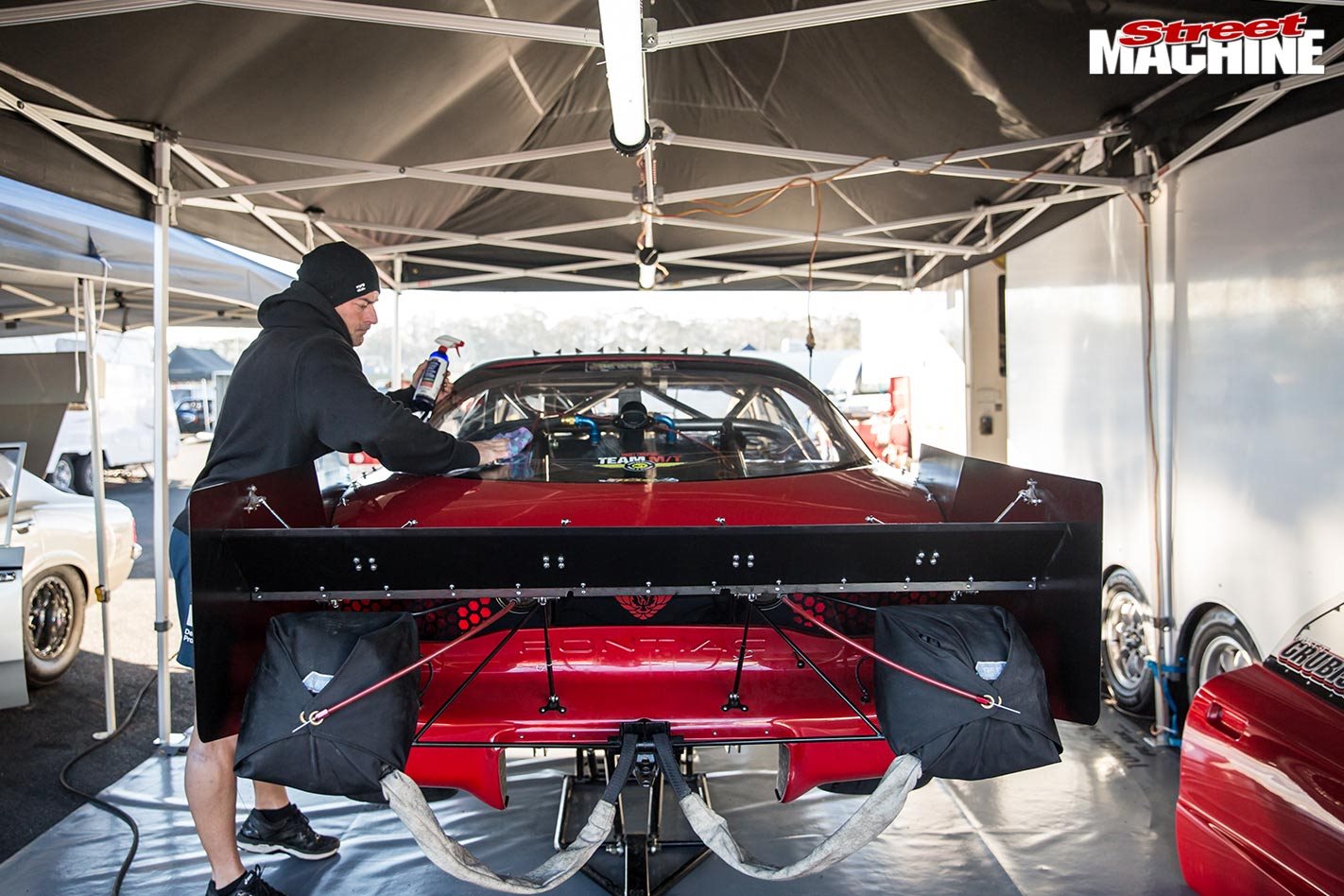 He went to the US to check out the car and was impressed, but didn’t decide to buy it until he got back to Australia. “I wasn’t really in love with the body shape, but I needed to be at the front of the pack back home,” Matt says. “I needed a car that I don’t have to upgrade in a year, and this thing ticked all the boxes.”

“I flew back a month later to head to Darlington, South Carolina to test the Pontiac with a bunch of other Pro Line cars,” Matt explains. “Sure enough the weather came in, so we went south to Orlando, where the track wasn’t good but we agreed I needed to do some laps and some time in the car. 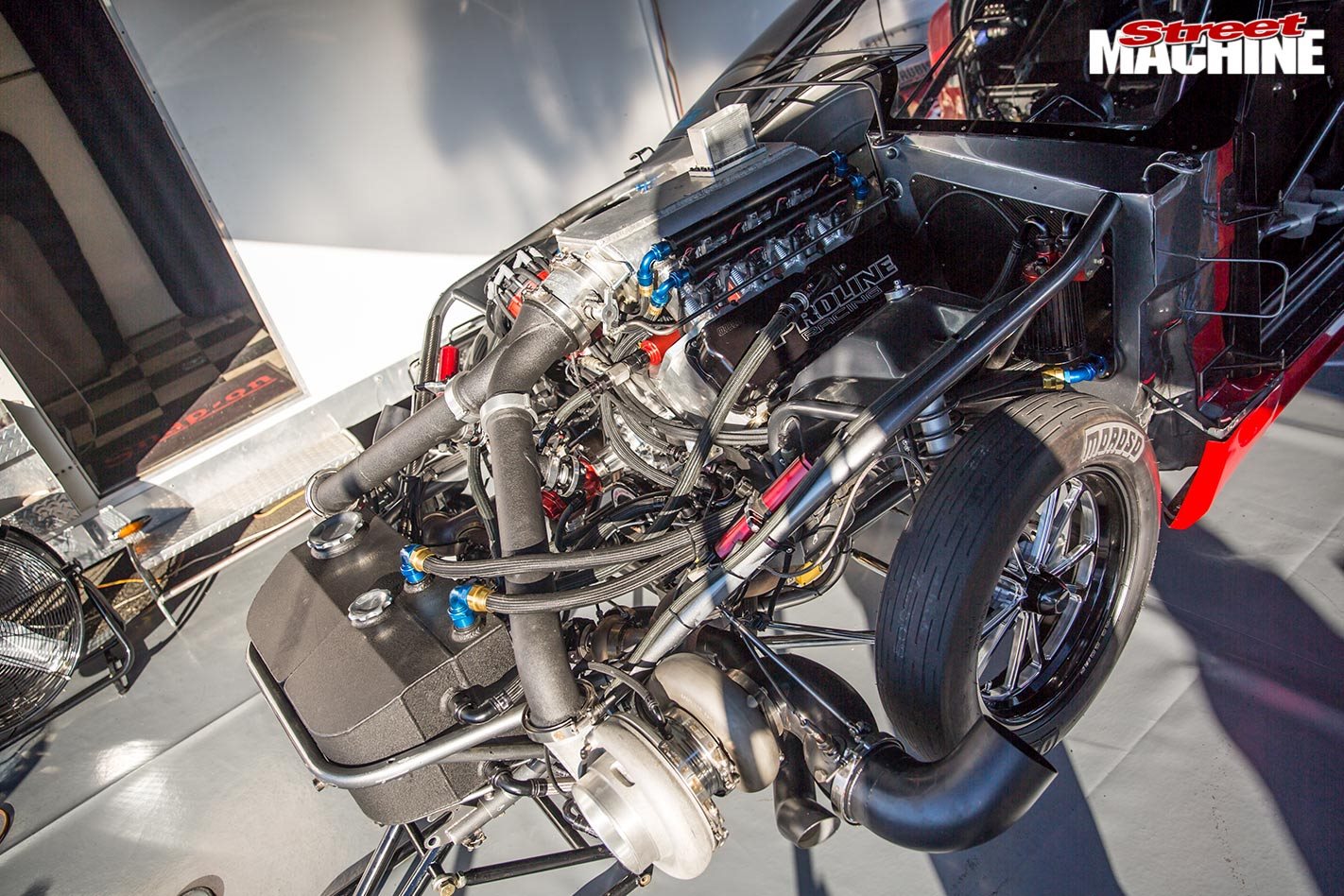 The Racecraft Inc chassis has been fitted with a Pro Line/Alan Johnson full-billet stage III 481X that runs twin 102 Precision turbos, a Pro-Mag and a FuelTech ECU.

Transmission is a two-speed TH400 built by Mark Micke at M&M Transmission, with a ProTorque converter. Under the rear end there’s a modular Mark Williams alloy housing and Santhuff shocks. The attention to detail is simply stunning.

Despite the extravagance of the build, it is actually an LDR (Limited Drag Radial) car that still retains the stock front chassis rails, and the build is based on an Outlaw 10.5 car.

The 572-cube 481X motor is known for its reliability, and between rounds it really only needs valve springs and plugs checked, as well as the data downloaded. There is a bit of a maintenance program needed on the fuel side though, as it runs on methanol. The engine should be able to make 40 passes before it comes apart for rods, rings and bearings. 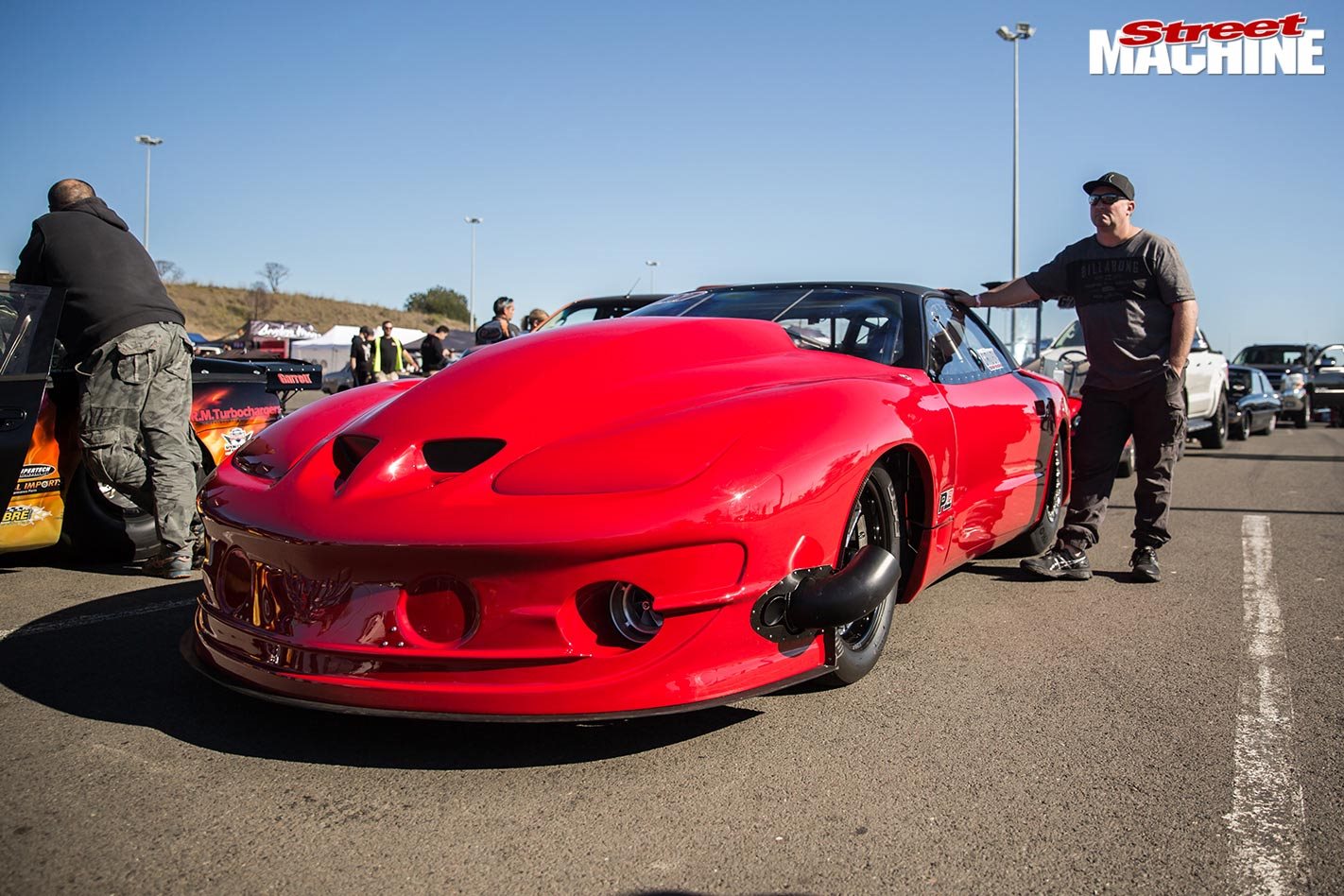 Fortunately Matt bought the car with a ton of spares, ranging from cylinder heads to rockers, pistons and rods. In race weight in comes in at 3030lb with driver.

Kon from Wollongong Automotive Services will handle the tuning and suspension, while Westend Performance will look after the engine. 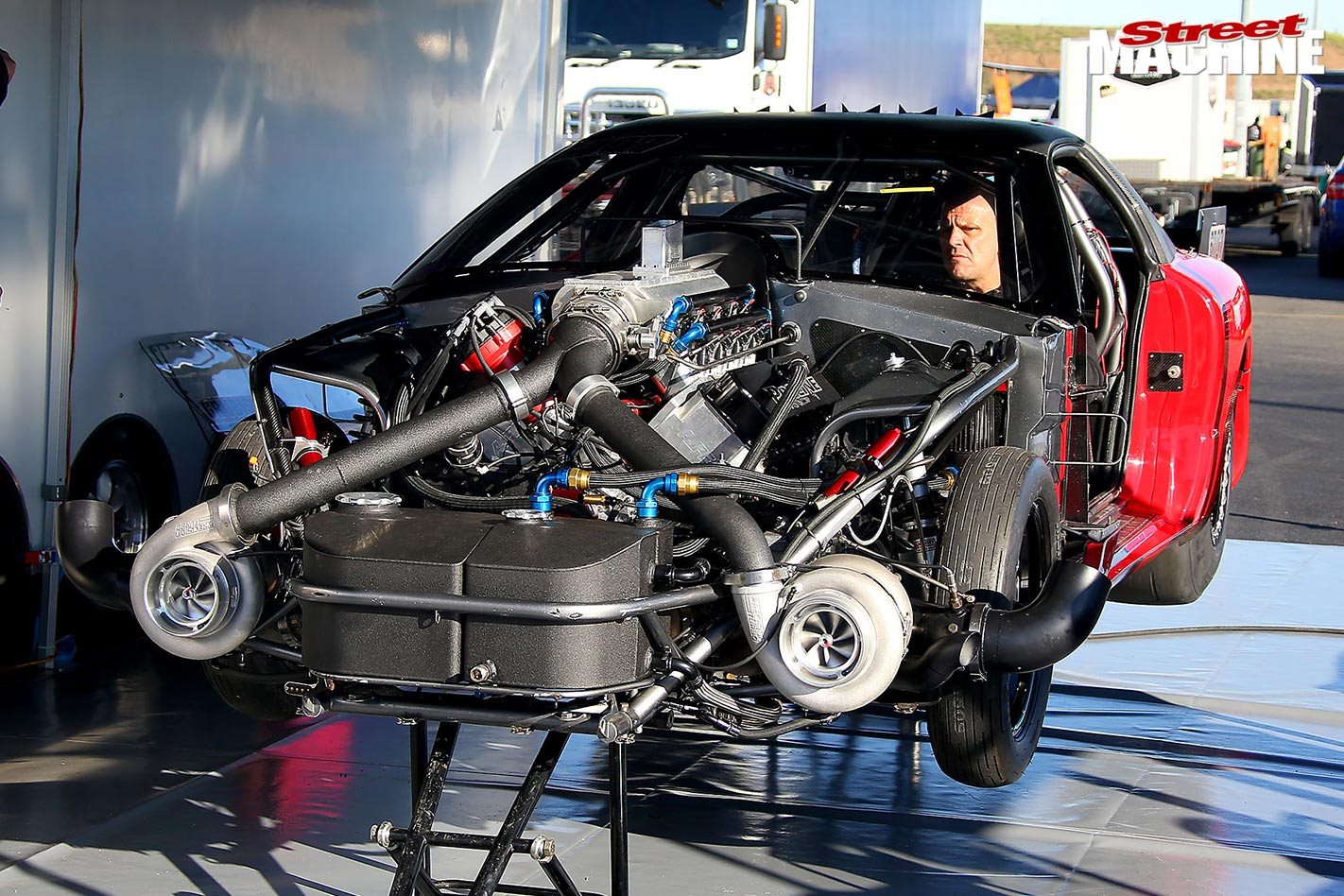 After debuting the car at the recent Grudge Kings event at Sydney Dragway, Matt is looking forward to campaigning the Firebird next year. “It was really a rush to get the car to Grudge Kings, and we probably should not have gone,” he admits. “But I’m planning on putting in a full season next year, and budget-wise you need to be prepared to spend about $20K to do the rounds. At this stage we have enough spare to be able to fix most things at the track, and I probably need to get a spare trans to cover all the bases.”

However, Matt knows how competitive the radial scene is right now. “I’d like to think I can campaign this car for the next five years, but there are some big radial hitters out there at the moment,” he says. “At the upcoming Kenda round, if the track is good we could see Jeremy Callaghan in the Camaro, Jarrod Wood in the Mustang, Jet Martin and Kit Hunter in the Commodores, Craig Burns in the new Brad-powered Mustang and Shaun Hale from Queensland all run into the high three-second zone over the eighth. Even the boys who bought my old Nova can run with the best of us. So in other words, there are some seriously fast cars getting around at the moment, all running at the limits of motors, tyres and chassis.”