YOU might be surprised to learn that this weapon causing mass erections doesn’t hail from hot rod central in the US or even our own excellent hot rod fraternity. Nope, builder Carl Frith is from Bristol, Pomgolia, where, they say, many ’32 Model B Fords enjoy a life together, although you’d be hard put to find another one this tough. 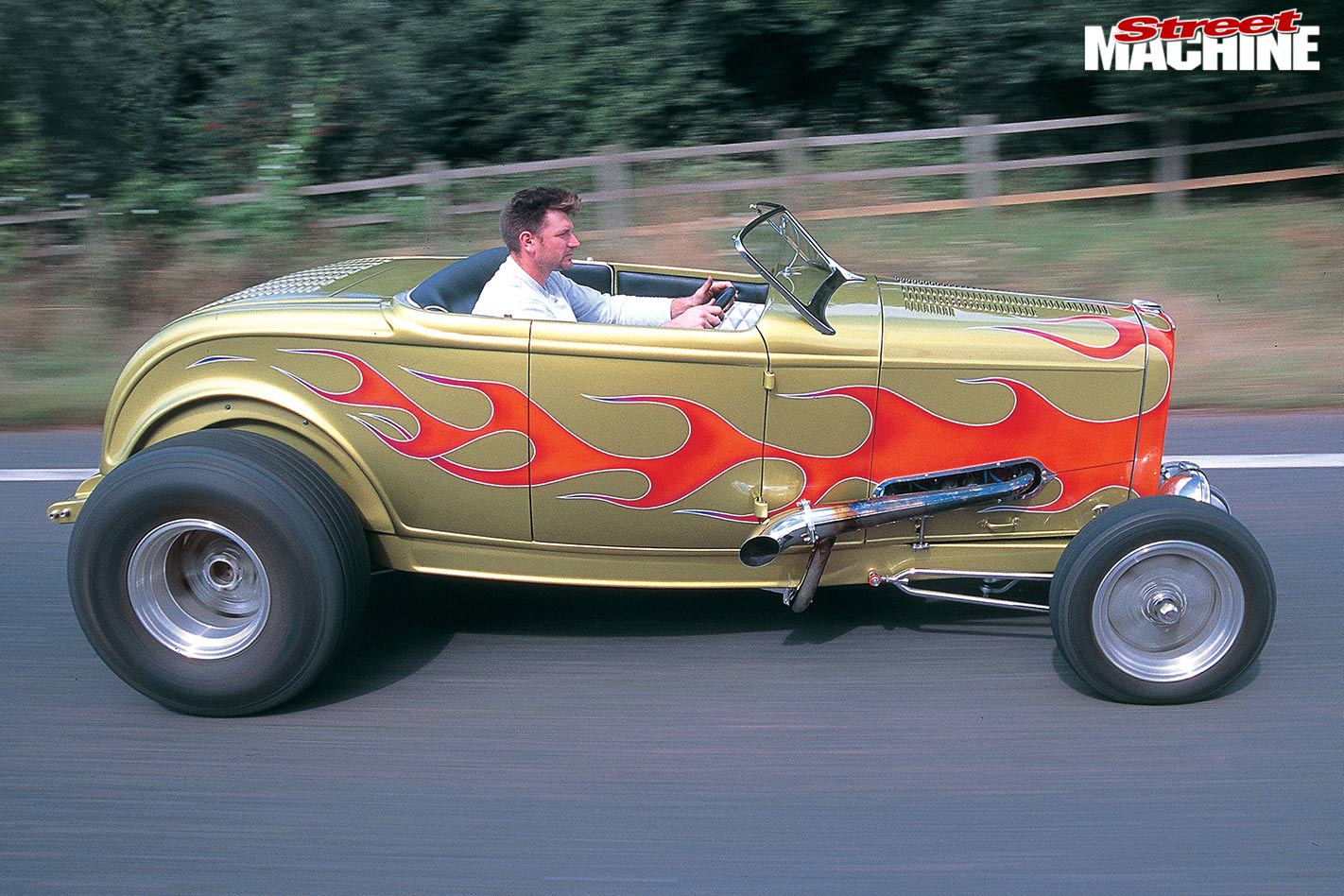 It’s the 440 big-block Chrysler bored out to 446ci that gives this 450hp strip teaser bags of street cred and would draw more than one “Blimey, guv’nor” from the locals as the uniquely muffled muscle cruises by. Look closely at where the headers join the turnout. See that two-inch pipe heading down under the car? That channels the gases out the back via the Cherry bomb-style mufflers for cruising; remove the blanking plates and you get straight throughs. Neat.

But all that came later in the build, which started with a pair of rear coil-overs attached to a Ford nine-inch axle featuring monster, aircraft-sized 11in brakes. 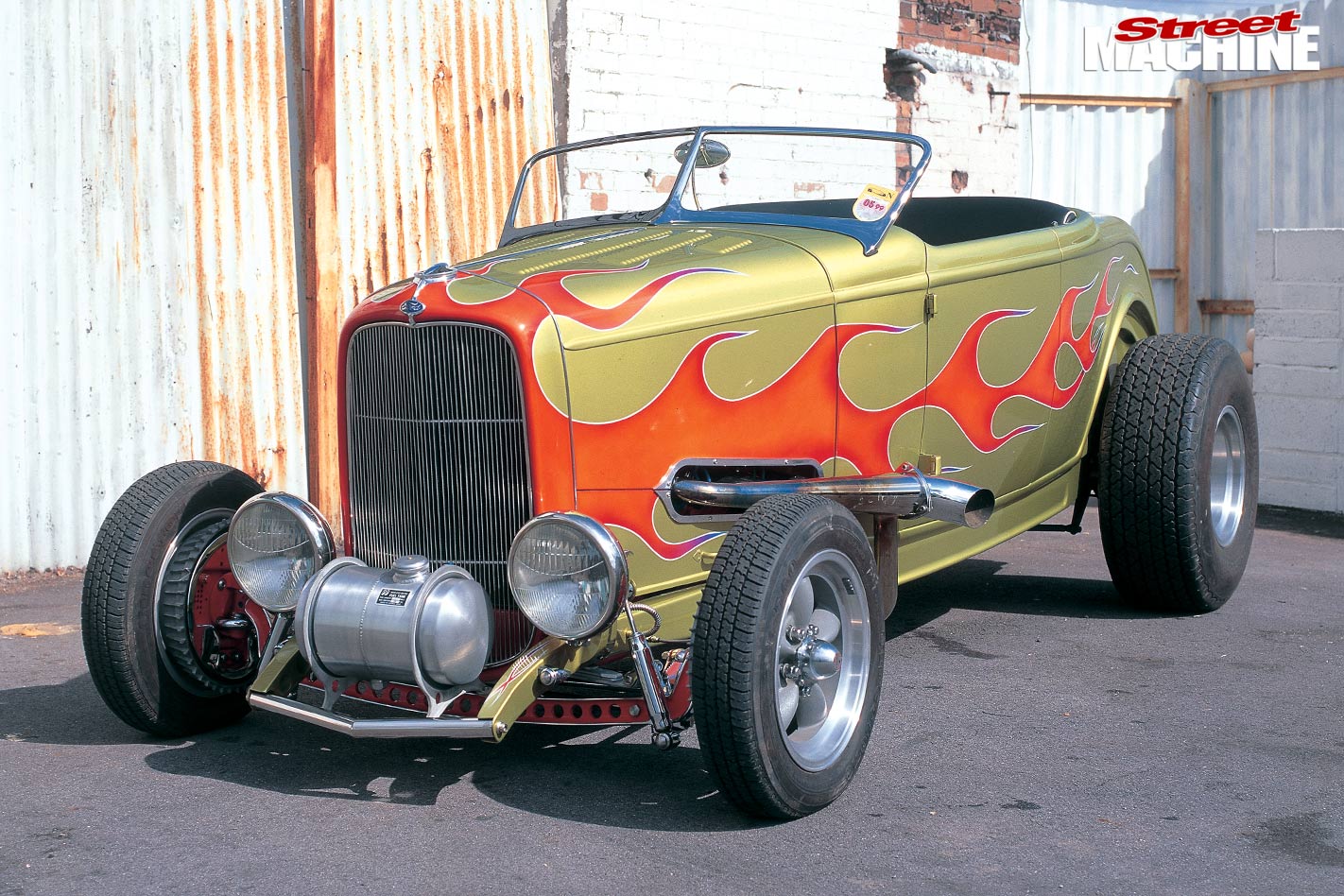 “I’m not sure what the axle’s off but the brakes and finned drums completely fill the wheels,” Carl says. They look pretty cool as do the huge 1940s Ford rear drums, mated with Buick units up front.

Bristol bloke Jerry Denning built the chassis, which features tube crossmembers and a ladder-bar rear to locate the axle and LSD running a 3.7:1 final drive. Up front traversed leaf springs take the rough out of the ride with a Datsun 120Y steering box keeping it all pointing in the right direction and that unusual bodywork from harm. 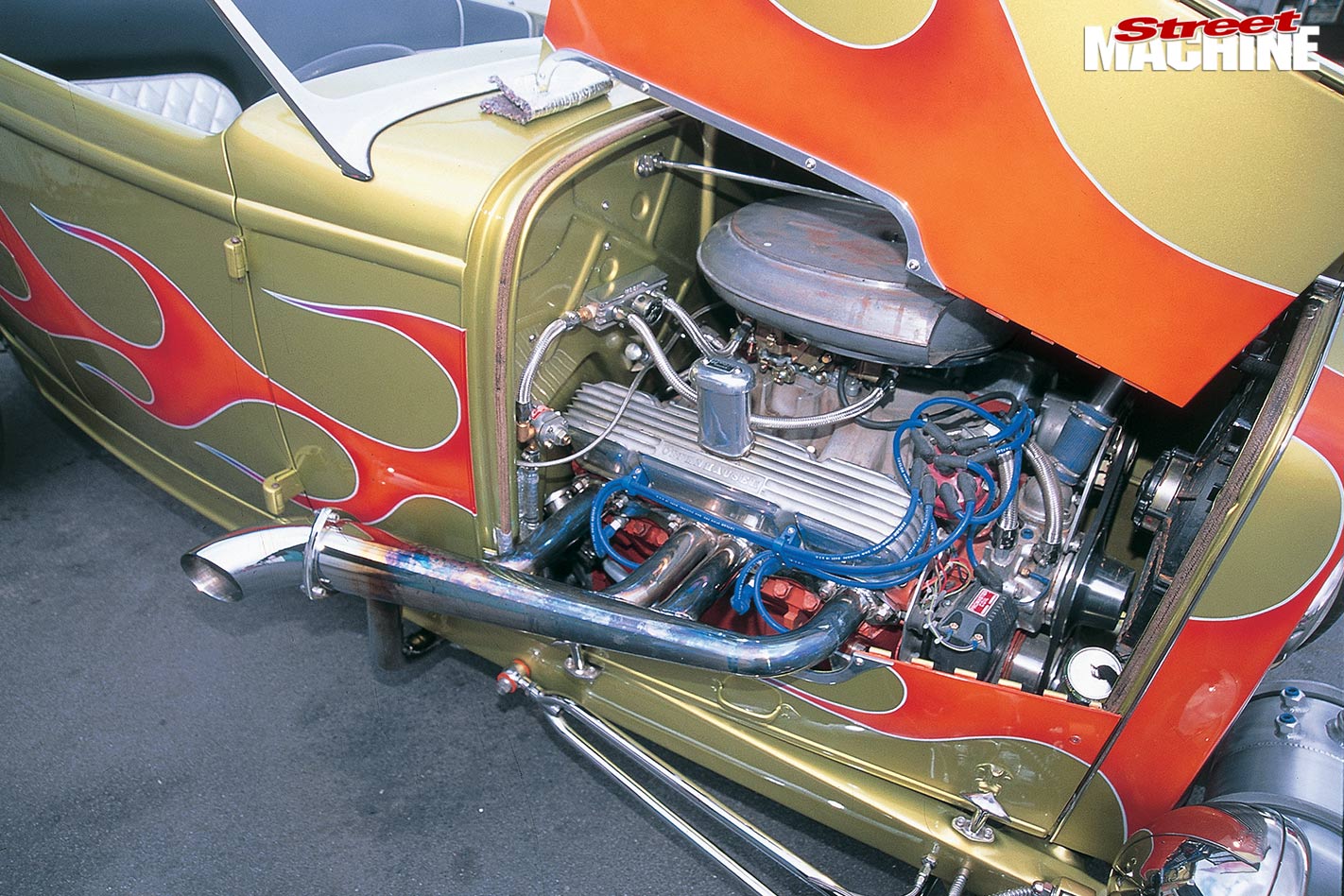 Carl’s intention from the start was to be different so the boot lid from the fabricated body shell was sent off to be louvred. It ain’t easy whacking a big curved plate of sheet metal into a louvre press, but when it returned from the shop the curve was almost gone. This meant the lid had to be reshaped and refitted – a big job and the biggest pain in the arse of the whole project. The other consideration was accommodating those protruding headers – a relatively simple matter of splitting the bonnet flaps. 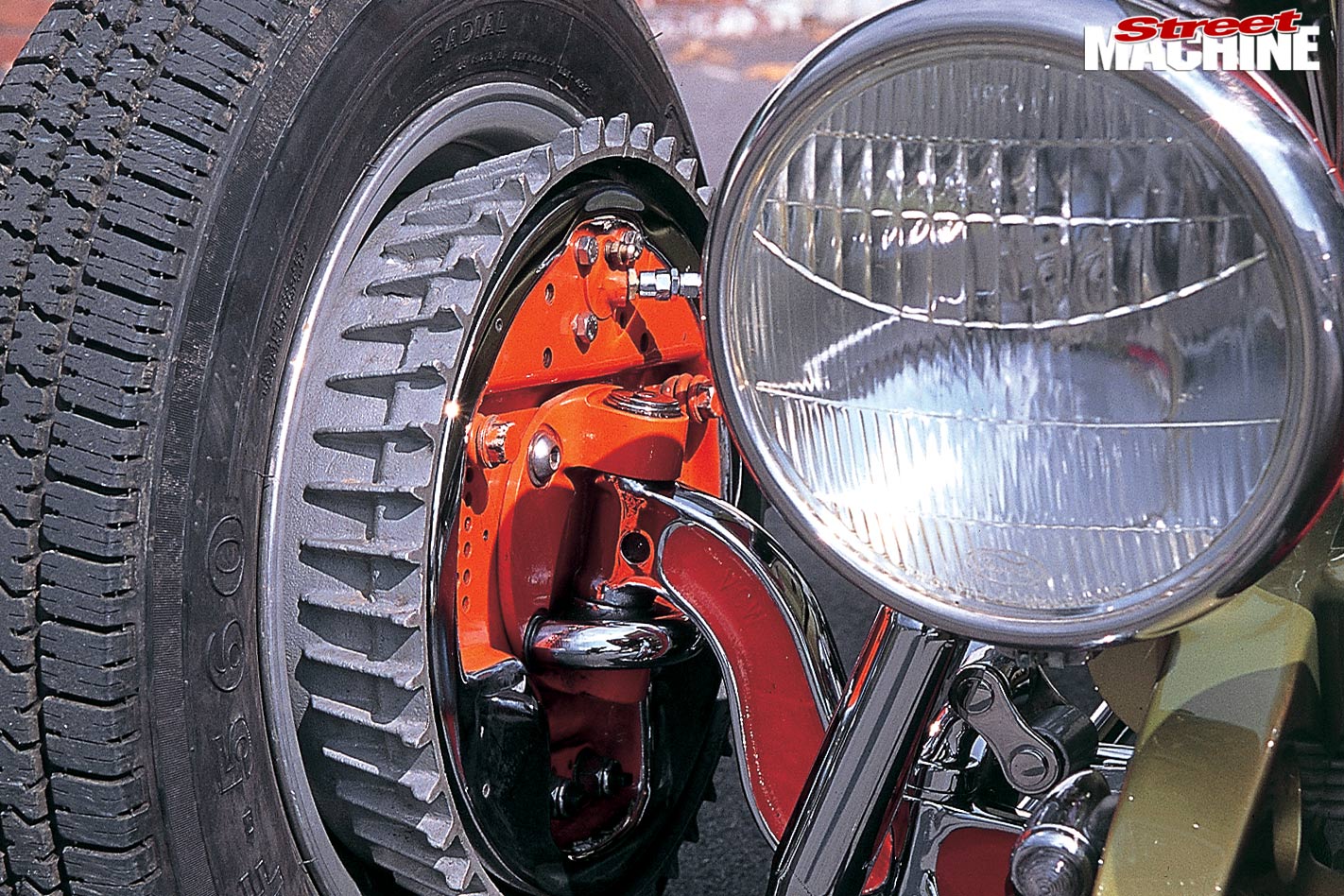 Metallic green and orange flames certainly make Carl’s Deuce stand out and he was tempted to just get that take care of the visuals and go with a fairly standard tuck ’n’ roll interior. But in keeping with his edict of being different, silver metal flake in a diamond tuft pattern set in a black marine vinyl was settled on instead.

If you’re lucky enough to be sitting on said seats you’ll either be gazing through the swept-back DuVall screen or at a simple layout of Moon gauges and gripping the Grant three-spoke tiller. And you’d want to have a tight grip on that wheel when you step on the loud pedal. 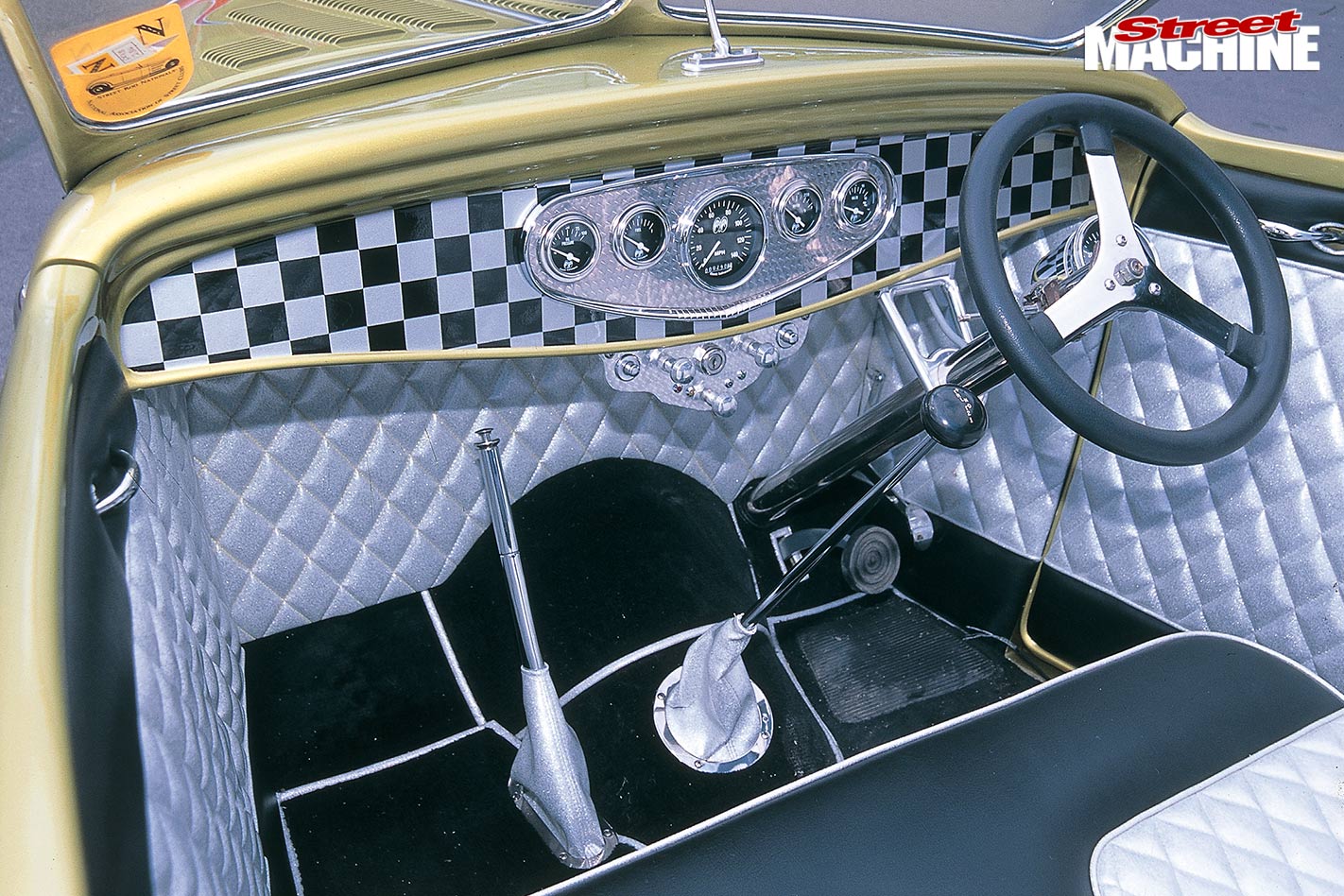 As mentioned before, Carl has gone Mopar for muscle, enlisting local bloke Geoff Hauser to give it a right ol’ warm-up. A 30-thou bore, ported and matched heads, a three-angle valve job, steel; crank, TRW conrods and 10:1 forged pistons are among the goodies along with the Lunati hydraulic cam, Holley Dominator manifold and a 750cfm double-pumper. Getting its 450 horses out the back is a 727 Torqueflite tranny with a 2800rpm stall.

Carl took it immediately to the track and with ‘economical’ gearing ran 13.2 on street tyres and 12.5 on slicks. 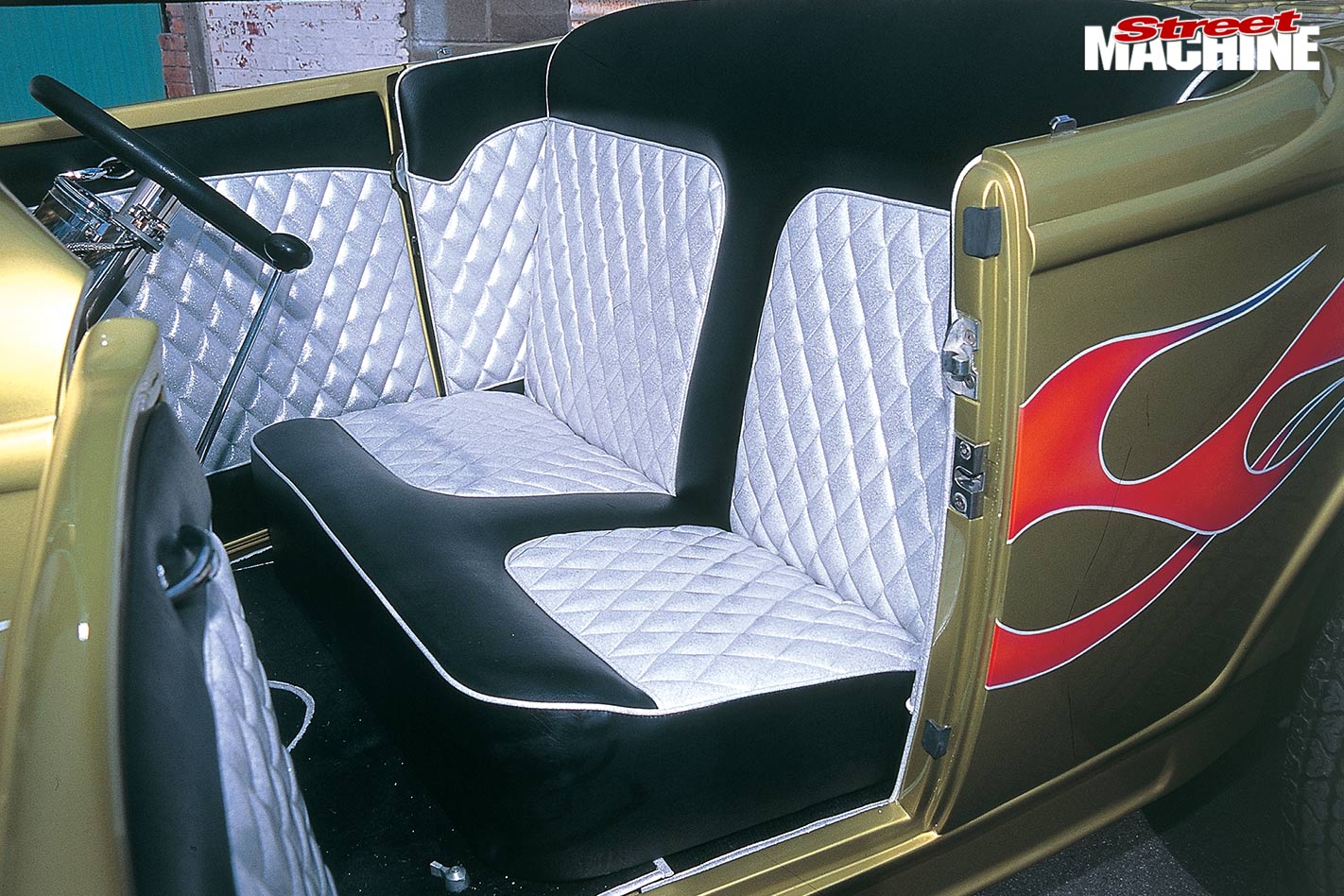 Think hot rods, think Bristol? Not likely, but believe it or not it’s one of the havens for the hot rod community in the UK. Bristol Street Rods is the name of a group of guys living the dream in their home town in the south-west of England, and their collection is predominantly ’32 Fords. They even have their own website where you can check up on what they’re up to on the other side of the planet, and it appears they’re not so different from us. Punch www.bristolhotrods.co.uk into your browser for a look-see.