MAKING a sequel flick is always a tough gig, but not many have had to live up to such a legendary forerunner as American Graffiti. Hailed as an instant classic shortly after its release in 1973, the George Lucas-helmed original continues to be lauded – especially by us car nuts – nearly five decades later. So it was quite a bold move for Lucasfilm to take a punt with a sequel, More American Graffiti, in 1979. 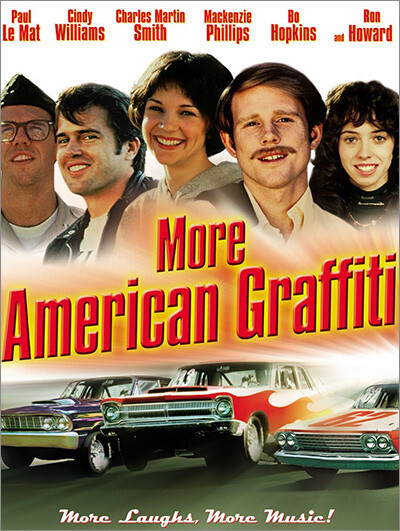 This time around, Lucas chose to pass the writer/director hat to Bill L Norton, who wrote the script for Convoy and has since amassed some pretty decent TV director credits, such as The Twilight Zone, Tour of Duty, Medium and Buffy the Vampire Slayer.

More American Graffiti explores the closing stills of the original movie by elaborating on the immediate futures of most of the primary cast, cleverly intertwining each storyline via few-minute bursts, each taking place on a different New Year’s Eve between 1964 and 1967.

We have John Milner (Le Mat) vying for Top Eliminator honours against the factory team at the Fremont Drag Strip; Terry ‘The Toad’ Fields (Smith) desperate to escape the war in Vietnam; Debbie (Clark) living the hippy lifestyle and trying to find her way with a seedy boyfriend, Lance (Lansing); and newlyweds Steve and Laurie (Howard and Williams respectively) confronting the pressures of marriage and parenthood while being drawn into anti-war protests with Laurie’s younger brother, Andy (Seltzer).

Richard Dreyfuss declined the opportunity to reprise his role as Curt Henderson (his character is merely mentioned in passing), while Harrison Ford (on the back of his Star Wars success) returned for a cameo as Falfa, now a police officer, having traded his ‘field car’ for a cop’s Harley-Davidson.

As to be expected, the Milner story is where the gearhead interest is. After taking a spill, drag racer Milner teams up with rival Roger Beckwith (Place) to take on the factory-backed team. There’s also a blossoming love interest for Milner in the form of non-English-speaking Icelander, Eva (Bjorn).

The race action doesn’t disappoint; serious eye-candy is present both on the track and filling the background. The tyre-smoking FED action is on-point, but don’t be a knob like me and let the devil in the details spoil things; I wish I’d never seen the black ’57 sporting a set of Cragar Super Trick rims, which weren’t released until the early 70s.

MORE American Graffiti has a lot to live up to, but it actually holds up okay. I hated it when I first saw it back in the 1980s, as I was still riding the purist nostalgia wave of the original at the time. However, a recent re-watch with some alleged maturity under my belt has me appreciating the film far more. The four intertwined chapters nicely segue from the innocence of youth portrayed in American Graffiti to the seriousness of adulthood, while still leaving some of the humour of the original flick intact.

Cool flick fact:
This would be Ron Howard’s last credited role in a theatrically released movie.