When it comes to preserving custom car history, there’s little argument that the Americans have always done a better job than us. But the times they are a-changin’. Increasingly, classic Aussie customs are being treated like vehicular royalty, as today’s rev heads recognise their historical importance. This has led to a craving for information, which in turn has seen early car owners, builders and collectors come out of the woodwork. Digital scanners are running hot with old-school Polaroids and faded magazine spreads, which are then shared among eager appreciators either in print form or by social media avenues. 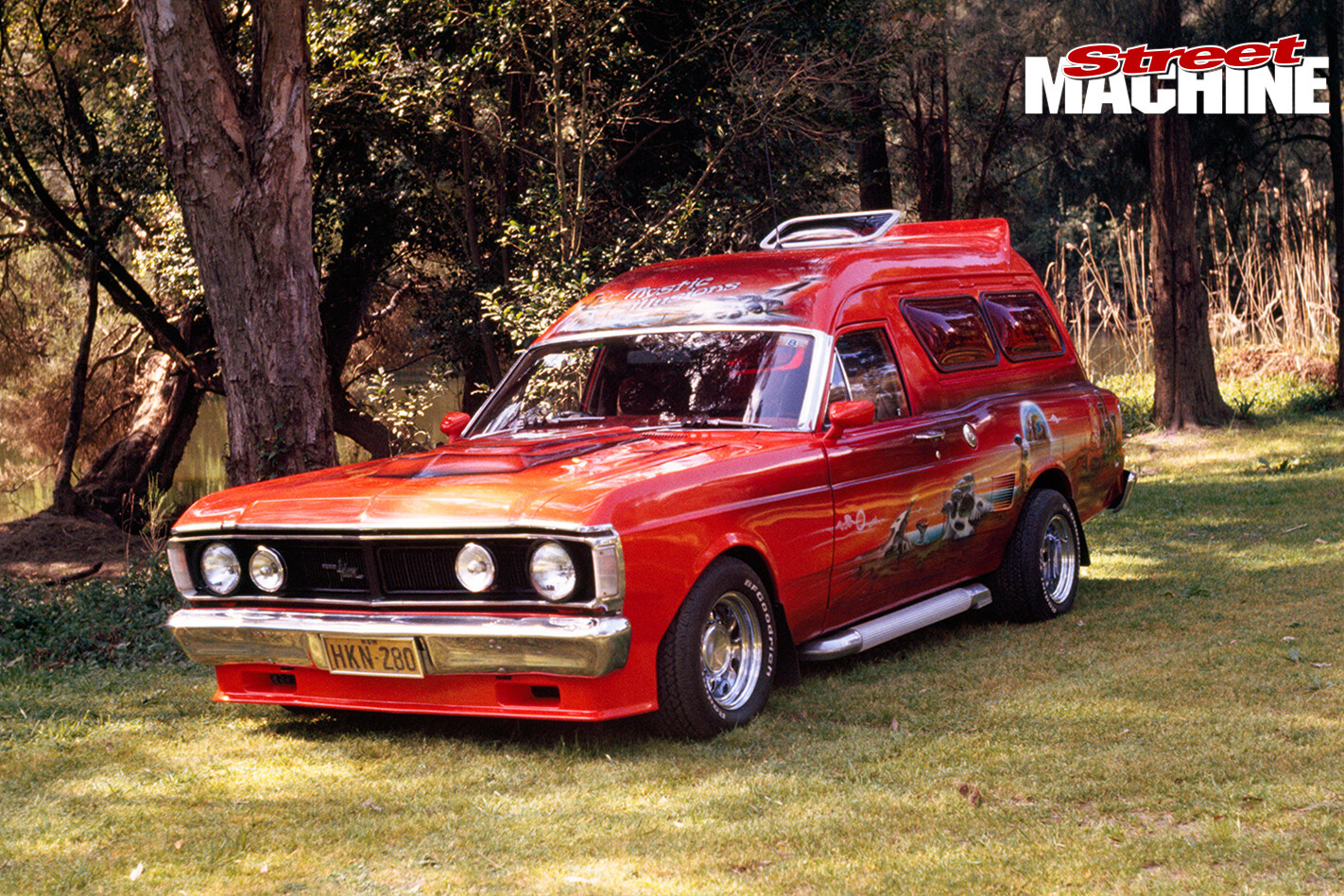 Custom panel vans have long been the three-legged dog of the local car scene, but the mass saturation and appeal that saw them peak in the late 70s and early 80s is slowly being recognised. Unfortunately, while the rare few have survived, most have been beaten by the ravages of time and lost. Genuine or replica traditional custom show vans are few and far between, so it’s a matter of folks delving into their archives to keep the movement alive for future generations – providing proof that this sort of stuff really did happen. 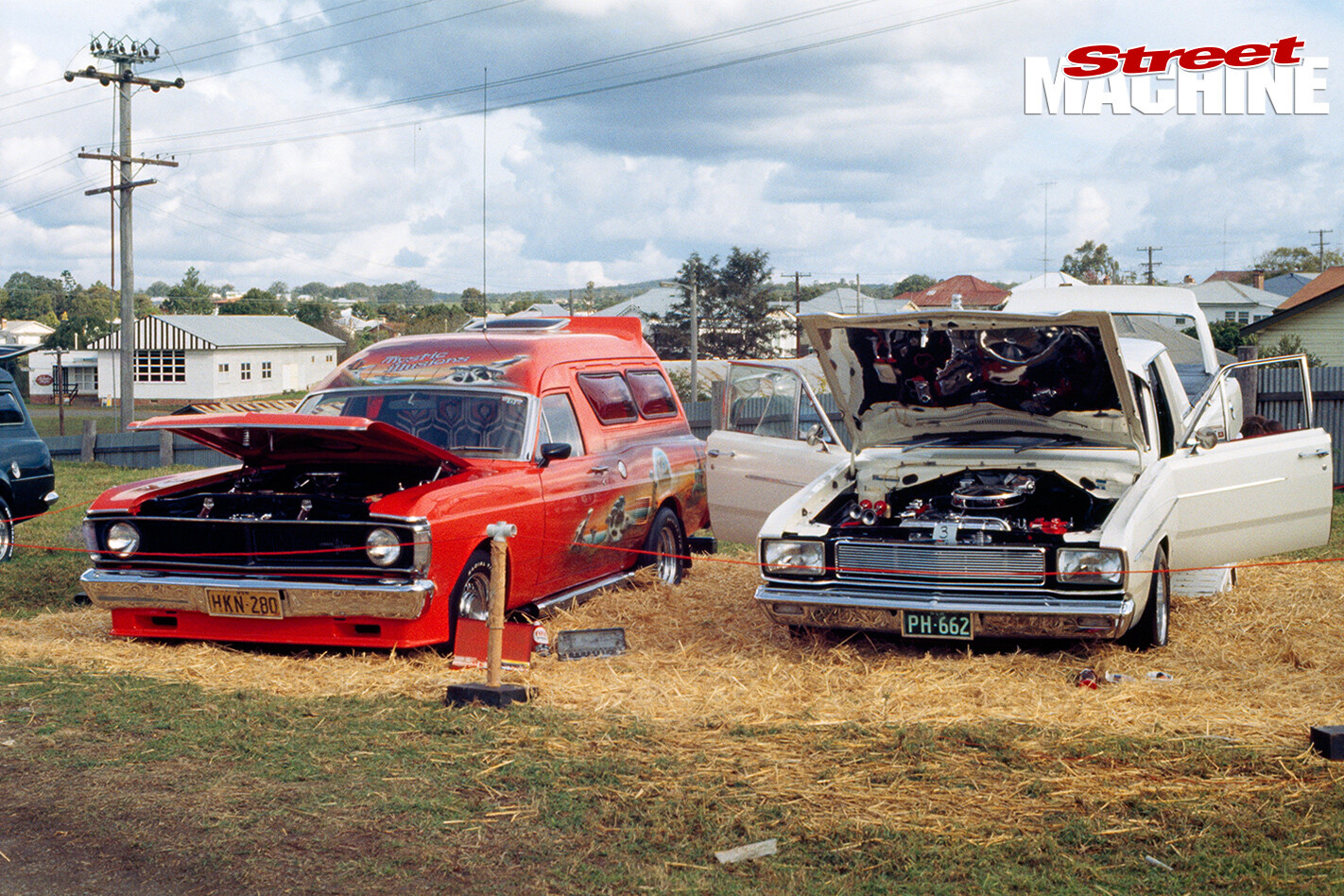 One of the most popular Ford vans of the era was Doug and Jeanette Cundy’s Mystic Illusions XY Falcon. Doug picked up the van in Stones Corner, Brisbane on April Fool’s Day, 1975. “A mate of mine had an XY van and I fell in love with it,” says Doug. “Living in Coffs Harbour, the van scene was pretty quiet, but the XY came with fresh red paint, some GS-styled black stripes and a weird brick wall pattern on the tailgate, so it was a start. I traded my XT ute for the van and the dealer let me swap over the ute’s 12-slotters, which helped.” 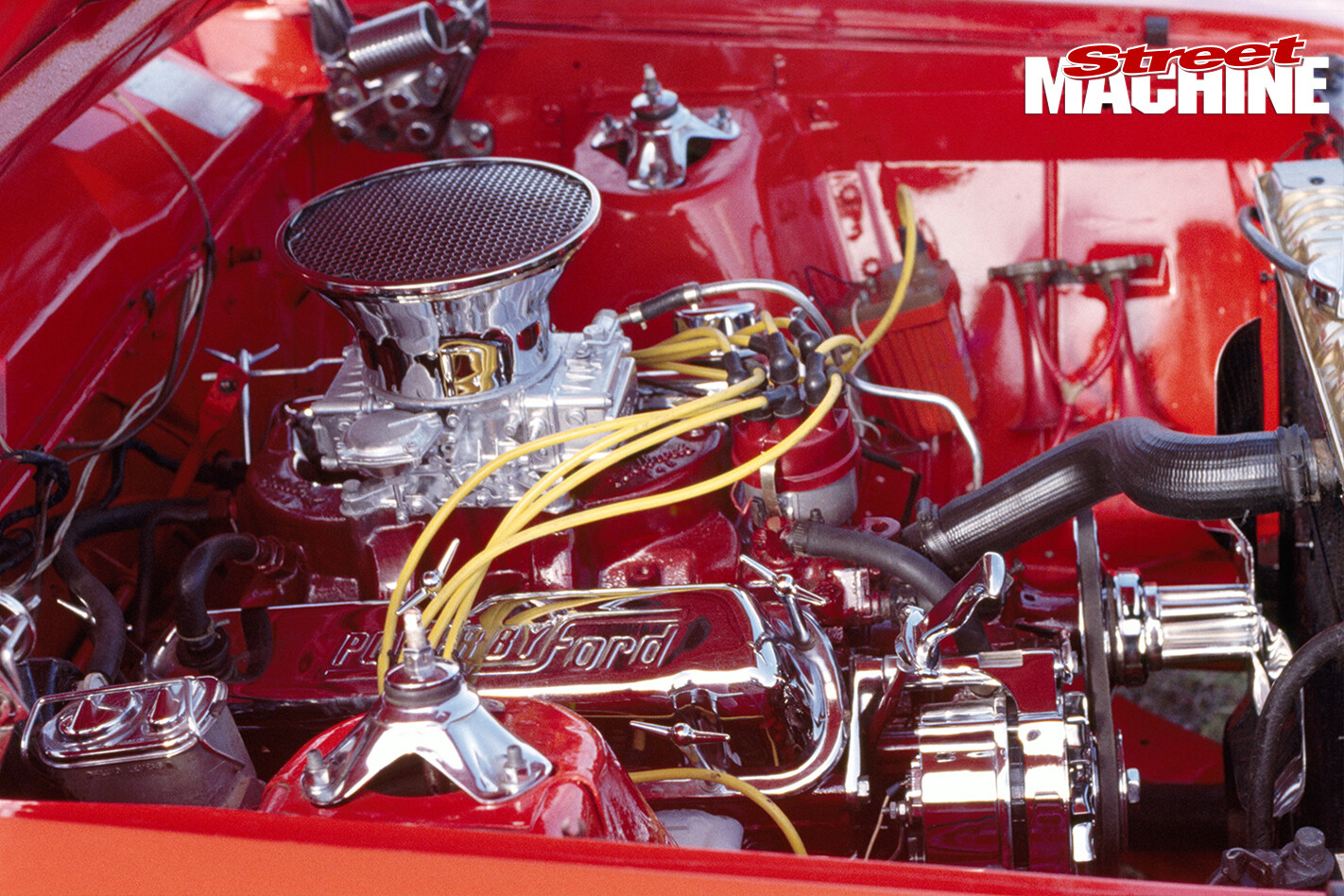 A stock 302 Windsor gave the van the right note, though initial amendments were limited to some home-made curtains and a mattress slung in the back. Not long after the purchase, the Cundys moved to Gosford, where the van bug bit hard. “We joined the Central Coast Van Club and were introduced to the show scene,” says Doug. “The XY received a couple of minor builds in ’76-77, including wheel changes, interior upgrades and a front spoiler, but it wasn’t until 1979 when the build stepped up a few notches.” Doug and Jeanette decided on a thorough visual makeover for the XY. With the help of fibreglasser mate Darryl Foot, XC front and rear spoilers and an L88 Corvette bonnet scoop were modified to fit, while any excess badges and chrome was shaved. Painter Bob Keegan took care of the multiple coats of Ford Fireglow acran, while the wrap-around murals by artist Mark Chrisdale boasted “42 shades of colour”. “The name Mystic Illusions came after the murals were finished,” says Doug. “They were your typical right out-there, wild subject matter, so it seemed appropriate.” 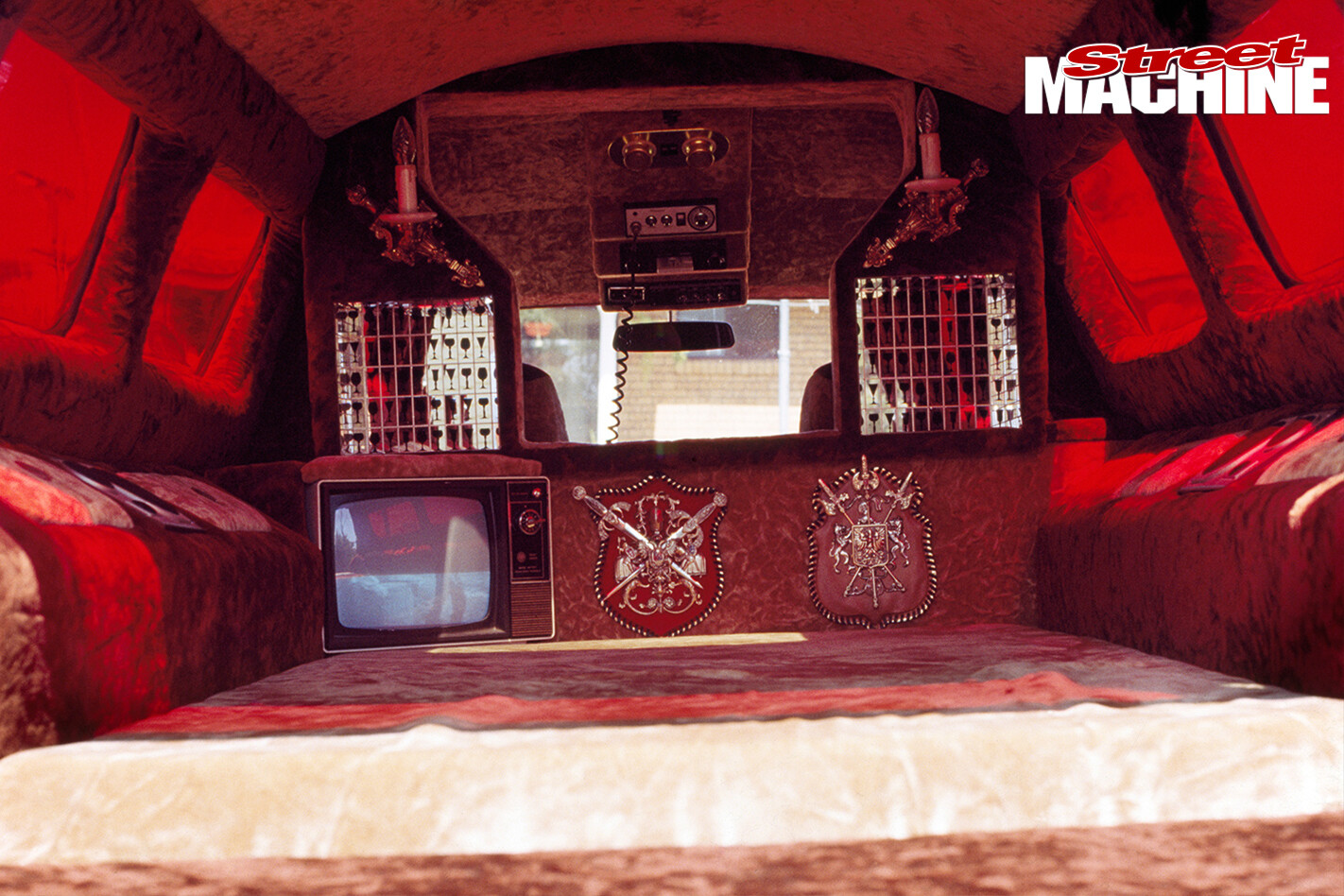 A new front interior featuring XC bucket seats and a tacho dash was trimmed in brown and beige velour. In true vanning fashion the rear was decked out with storage bins and archway, finished in the same velour, perfectly complimenting the deep-blown red bubble windows. Thrush brand sidepipes and wide chrome 12-slotters helped create some future nostalgia, while a Fairlane rear bumper was a perfect fit. The 302 Windsor eventually made way for a stout 351 Clevo sporting the necessary cam, head work and Holley mods, backed by a built C4 and stock diff. The van was a showstopper, picking up numerous awards for Top Exterior, Top Murals, Best Ford and Van of the Show. Leadfoot Doug also smoked out the Valla Park Van Nats with competition-winning burnouts in ’83 and ’84, and finished runner-up in ’85. “It was a beautiful, perfect van in absolute show condition,” says Jeanette. “There was nothing wrong with it, but this is where things went a little haywire!” In late ’85, the Cundys decided to throw some extra dollars at the XY. “I wanted to build Australia’s top van,” says Doug. “We set ourselves a six-month goal to unveil it at the big Warrnambool Van Show in 1986.” The car was completely stripped and sent to a friend well-known in the hot rod and street machine world for custom bodywork. The van was sandblasted and treated to a neat rolled rear pan, flared guards and flip-up XC door handles. A one-piece tailgate and custom rear lamps were also on the cards, but sadly all work came to a grinding halt. “It was going to be repainted in Fireglow so the plan was to reuse a lot of the original interior and running gear,” explains Doug. “It seemed easy at the time! But it became obvious we weren’t going to make the six-month deadline, and from there the van just fell further down the priority list. I got sick and tired of the constant excuses why we couldn’t see the van, and became pretty disheartened by the whole affair.” Work and family commitments, plus a move to Queensland, made the van even harder to keep tabs on, and in the end Doug’s interests went elsewhere. 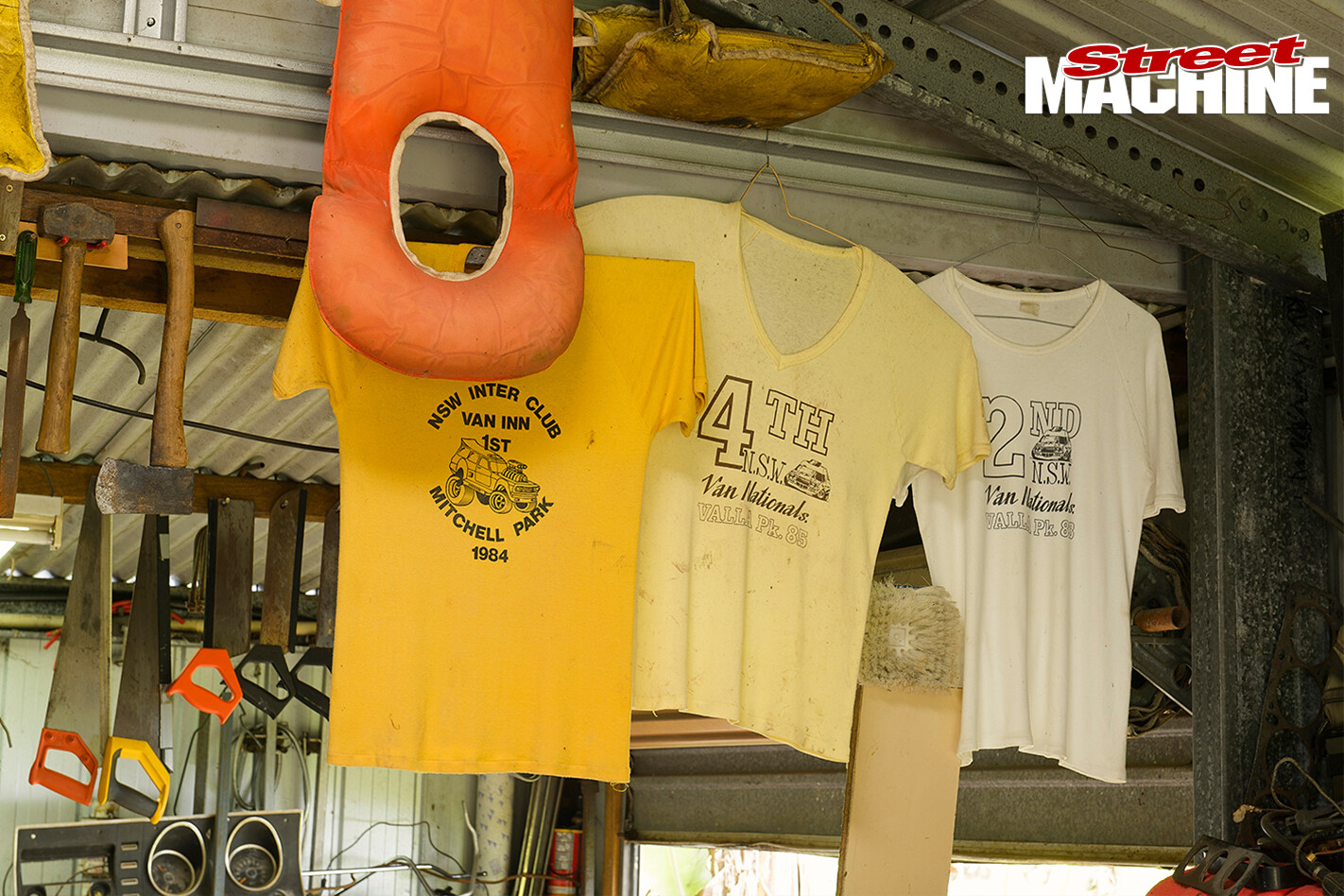 Fast-forward 25 years, and a chance encounter with some vanning pals stirred memories of Mystic Illusions and what could have been. “I joined Majestic Vanners Australia and started to feel the fire burning again,” says Doug. “We decided that enough was enough and it was time to reclaim the XY with the view to rebuilding it to its former glory.” 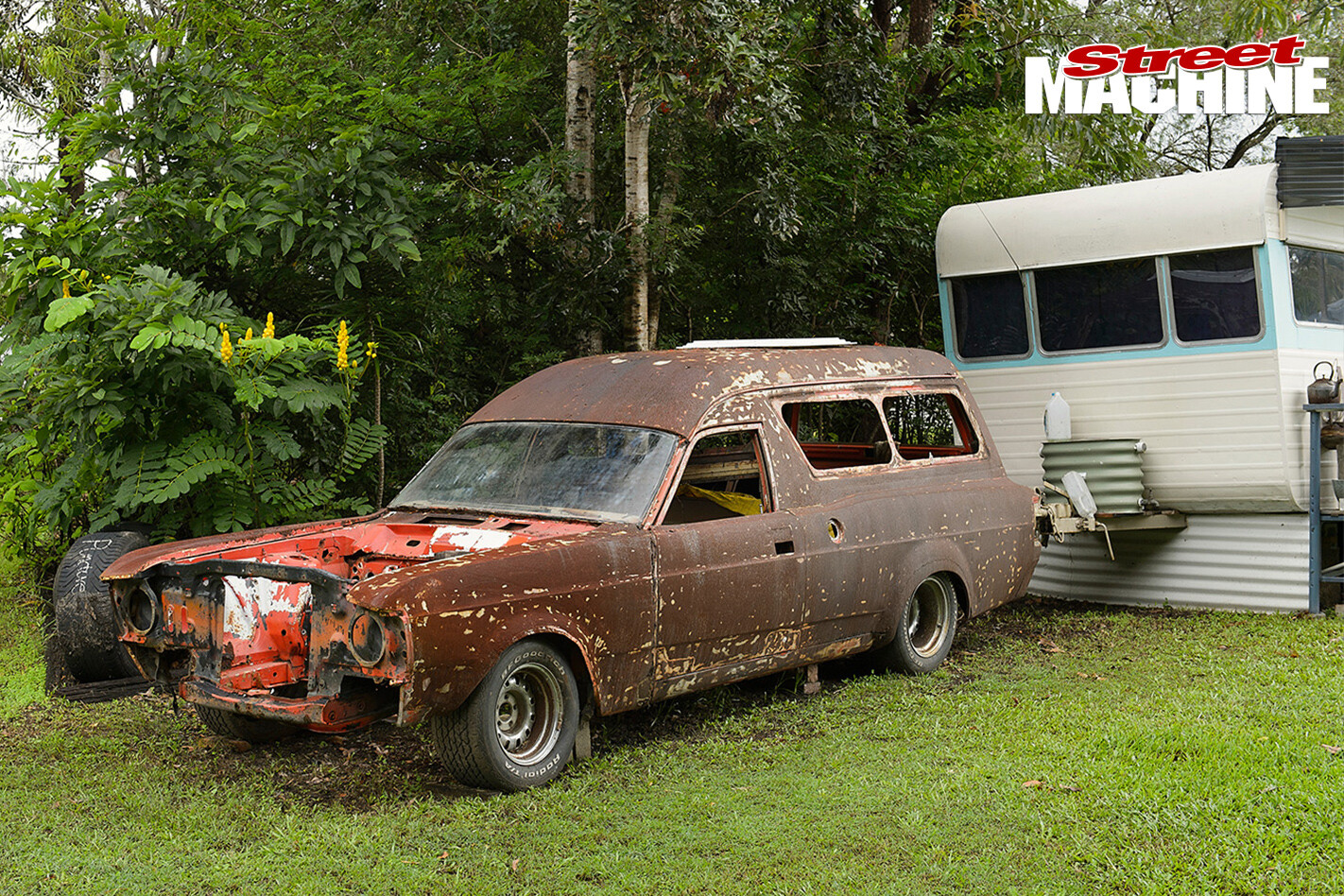 With the car trailer in tow, Doug and the family headed south, but what they found was worse than they could have imagined. “It was sitting in a makeshift lean-to, covered in rubbish. It had been left that whole time in bare metal. The poor thing looked totally stuffed.”

Doug and Jeanette’s panel-beating sons, (Summernats legend) Paul and Brendan, pronounced the bodyshell dead on arrival, so Doug dragged it home to see out its days as a backyard ornament. 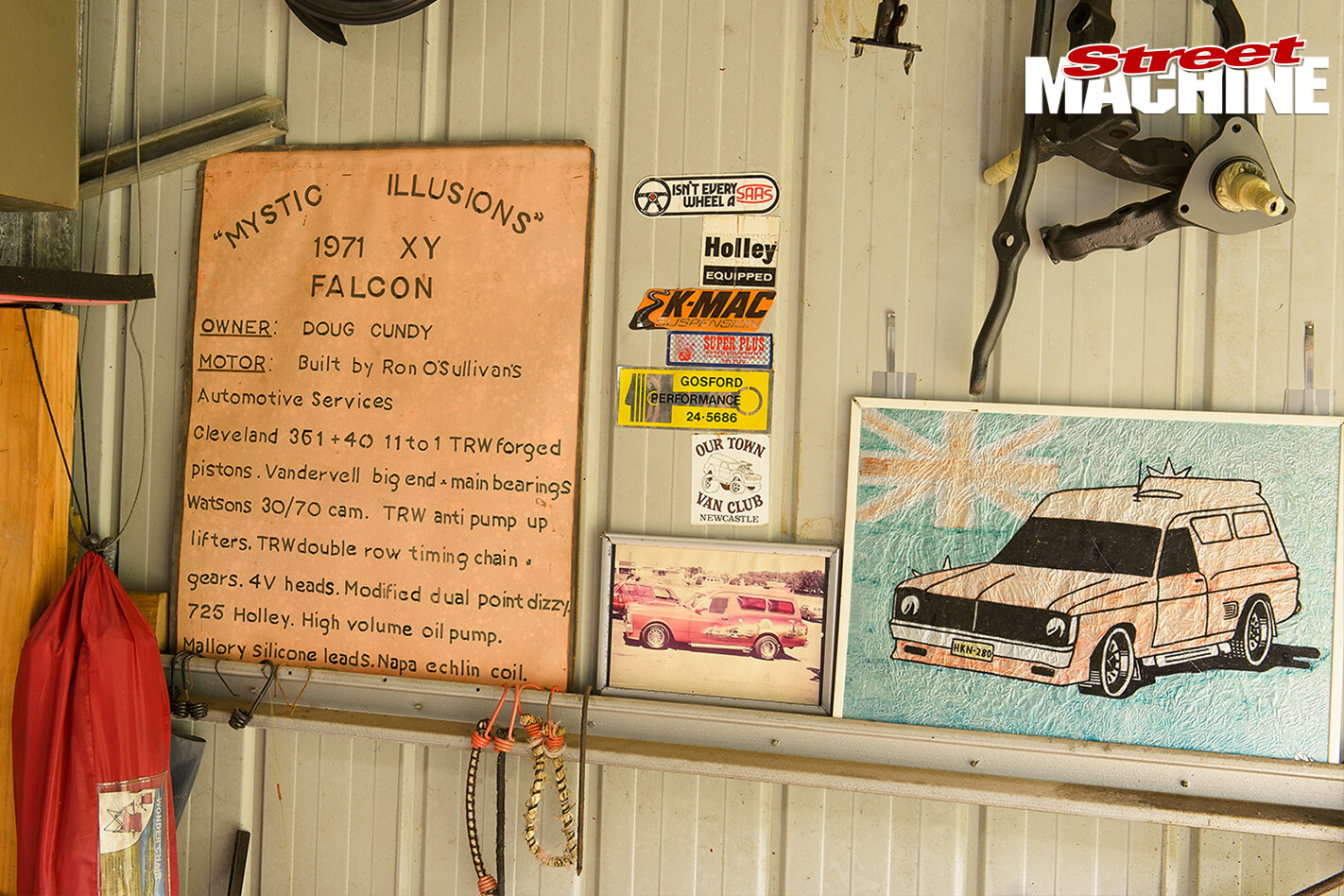 Doug’s modest two-bay shed and storage rooms are a veritable shrine to Mystic Illusions. Trophies, display boards, photos and drawings adorn the walls. Looking around the shed, you realise there are almost enough parts here to build an XY van – bubble windows, GT scoops, a 351 and C4, chrome work, velour seats and archway. Hang on — there is enough here to build an XY van! “I still have everything I stripped off it in 1985,” says Doug. “I’ve stored it and moved it around for 28 years, so I guess I never got out of vanning; I just hit the pause button for three decades!” With the Mystic Illusions’ parts handy, Doug decided to source another XY van shell. With help from the Majestic network, a likely candidate was discovered in Dubbo. “It needs some work but it’s the perfect basis to build Mystic Illusions 2,” he says. “We want to build it just like it was at its peak, although there will be some modern concessions such as 15-inch wheels and two-pack paint.” 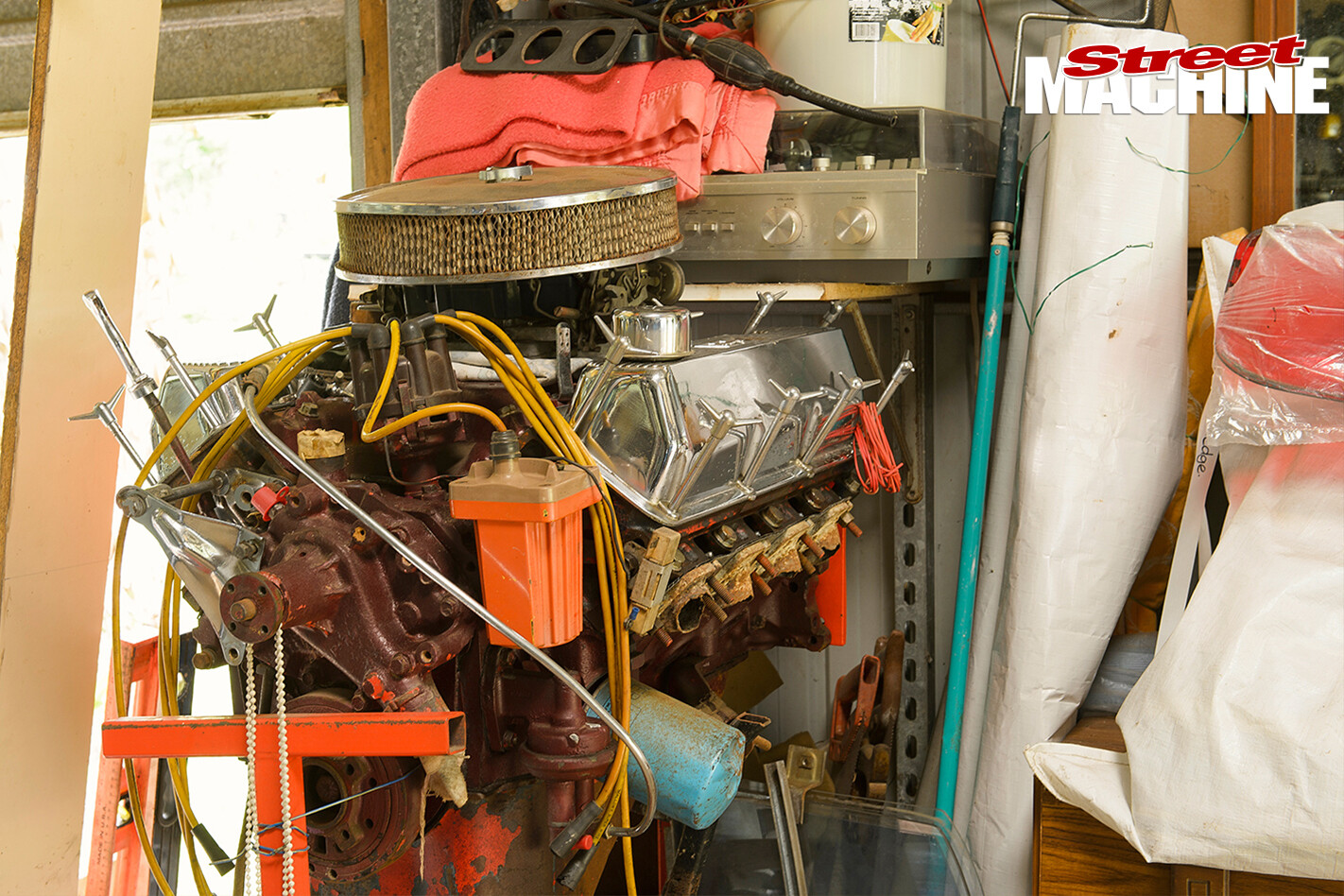 Brendan is getting stuck into the panel work prior to it being resprayed in the same Fireglow, with the murals to be recreated by SM artist Aden Jacobi.

“The engine and auto will need a rebuild, so there’s plenty of work ahead,” Doug says, “but I can finally fit the tunnel ram I bought 28 years ago!”