FROM humble beginnings as a mechanic and notorious street racer in the back streets of Marrickville, in Sydney’s inner west, Ned Sassine is a man who walks quietly and carries a big cam. His reputation was forged with big-power aspirated engines built for the street, river or race track by Hercules Competition Engines, his appropriately named business. It’s fair to say this quietly spoken spannerman has really lived a life that is the envy of many aspiring street machiners.

How did you get involved in the car scene?

It all began as a child. I was into toy cars and billykarts, and just stayed stuck in that place.

Mark I Escort with an 1100 motor, a real poverty pack.

Did you hot it up?

No — I didn’t have any money and Dad bought it for me. I think I fitted a set of 13-inch Capri wheels but that only made it slower. 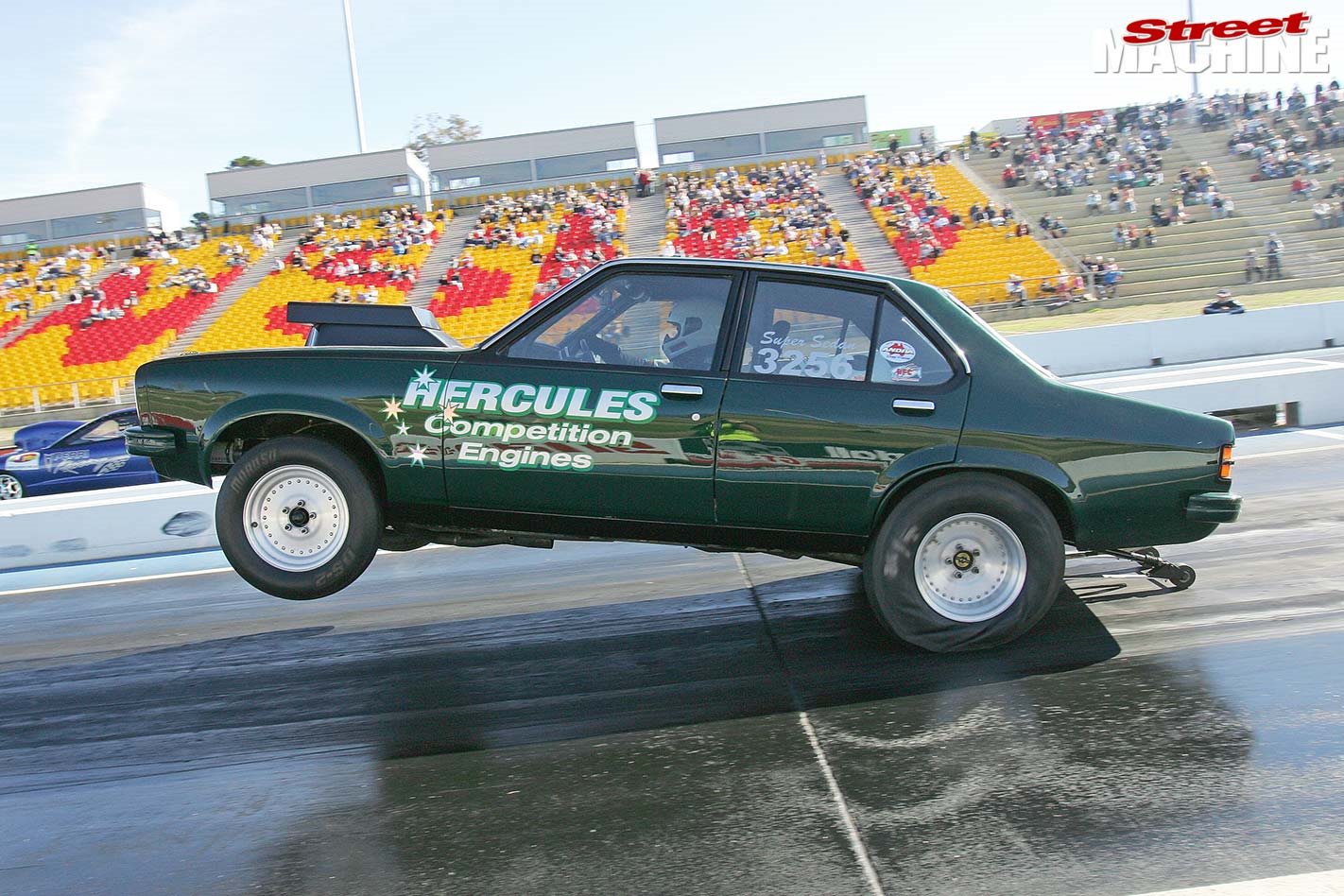 So how did you build up to street machines?

Through my older brother, Tony. He was into EH Holdens and XU-1 Toranas but once he got married a lot of that got cut off. Funnily enough, I still work with him today.

So I guess learning a trade was next?

Yes. I got an apprenticeship as a mechanic and worked in a number of places. I couldn’t stand the ordinary service work and got sick of it. Tony and I decided to get a small shop and we started out in business.

What was The Brickies like back in the day?

The Brickies was wild! It was named after the brickworks and it was really just organised back-street racing. All the boys would get together at Marrickville and organise runs with guys from Liverpool or wherever, and go and race. We’d race, almost get caught and run away. With hindsight, we did a lot of wrong things back then.

Where else did you race?

There was Beefies, which was named after the abattoirs in Carter Street, Lidcombe. That was pretty big.

How many cars and people would you get there?

On a busy night you would get 50 to 60, sometimes 70 cars. And people — you couldn’t count them. More than 2000 at times. You’d almost run over them getting down the street. 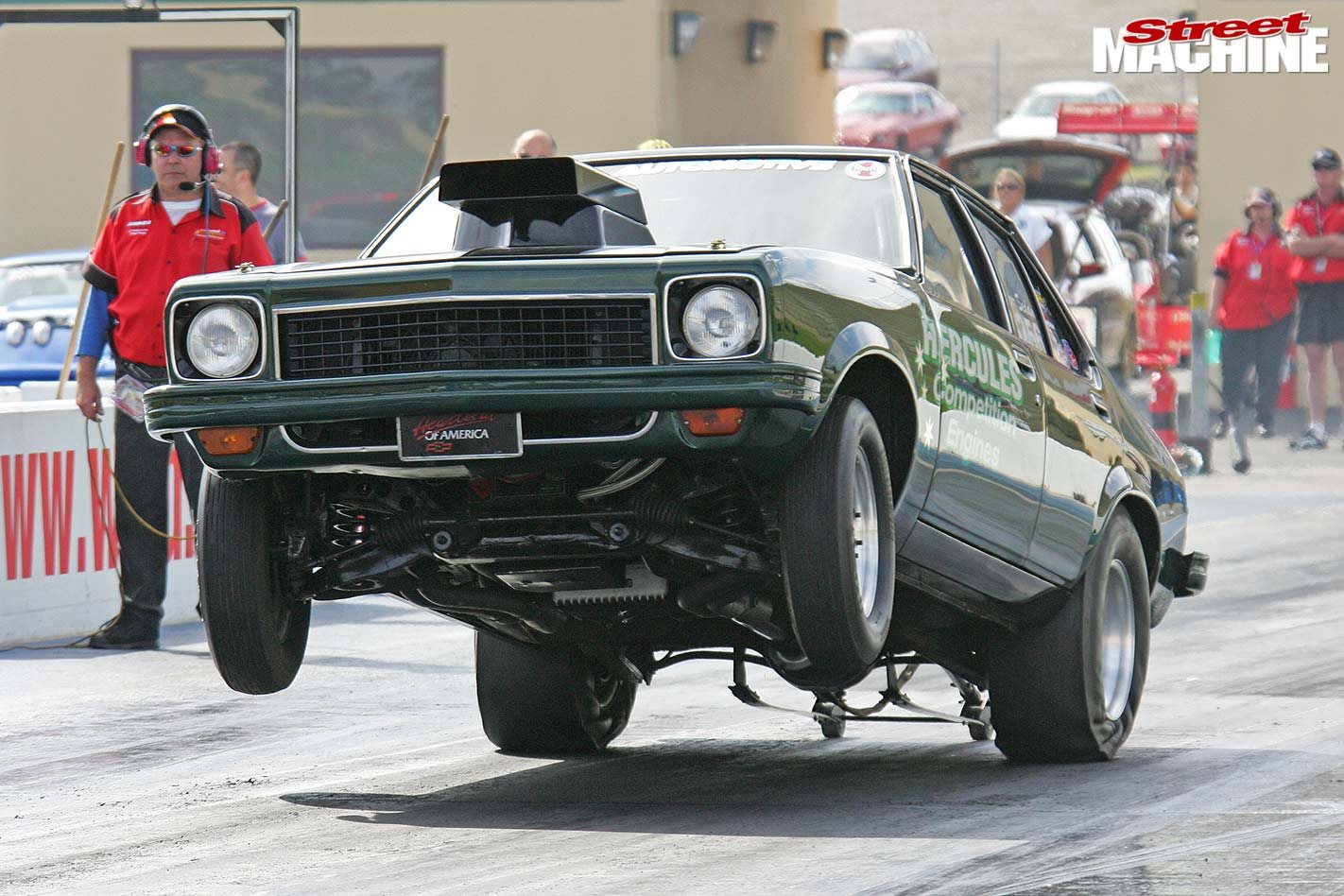 Best memory of that era?

Well I don’t know about the best but I was racing this guy in a red Falcon coupe and I was in my EH which had a small-block (327) Chev. Don’t ask me why — it was really stupid — but back then we all used to race with our lights off. I was probably doing 100mph and I had pulled a car and a half on this guy in the overtaking lane, so I was on the wrong side of the road but looking good. At that time I put my lights on and there in front of me was a blue paddy wagon blocking the road! The copper was an even bigger dickhead for doing it.

I slammed on the brakes and cranked on the wheel. The car just skidded forever, spinning down the road and eventually coming to rest in the gutter. If I hadn’t turned my lights on I would have been killed.

So I guess it all went pear-shaped from there?

The engine had stopped and before I could get it going I was physically pulled out of my car, arrested and chucked in an F100 paddy wagon. My car was left on the street until the early hours. It was a Sunday just after midnight and I had to be back in Parramatta Court for the hearing at 10.30am on the Monday morning.

Did it all end in tears?

I was charged with driving in a manner dangerous and illegal street racing, lost my licence for three years and copped a $1000 fine — that was hefty back in 1981. So after that we had lots of work on and it was all street car stuff. I didn’t really know what I was doing back then. Maybe I don’t today, either [laughs].

Did you have a crack at Castlereagh?

Yes, we caught the last three years of that era. It was such a ritual. Every time we could afford it, we’d all drive out there. We had two small block-powered EH Holdens and a couple of XU-1s. I used to run mid-13s on street tyres back then and had no idea what a racing slick was. It was really awesome; you could go and race for $1 a run and I never collected a time card. You would go and buy a strip of tickets, like at the fairground, and there would be a guy on a chair before the water box who would collect the tickets.

What kind of work were you doing then?

We had a variety of street cars and when they shut Castlereagh we went to Oran Park. Back then we had Mark II Escorts with small-block Fords, an HT Monaro with a big-block, LH Toranas with small-block Chevs — heaps of stuff.

Your family raced an LH Torana for many years.

That car was given to my younger brother, Norm, by Dad in about 1987. It had a 308 with a stick shift and we ran 12.1 for about three years. We fitted a set of VN heads to that motor and eventually broke the crank. Then we fitted a 400 Chev, which we raced for a while before it went in Frank Mamone’s BULLET Capri. Since then we’ve had a 386ci Chev that’s run 9.13@149mph. 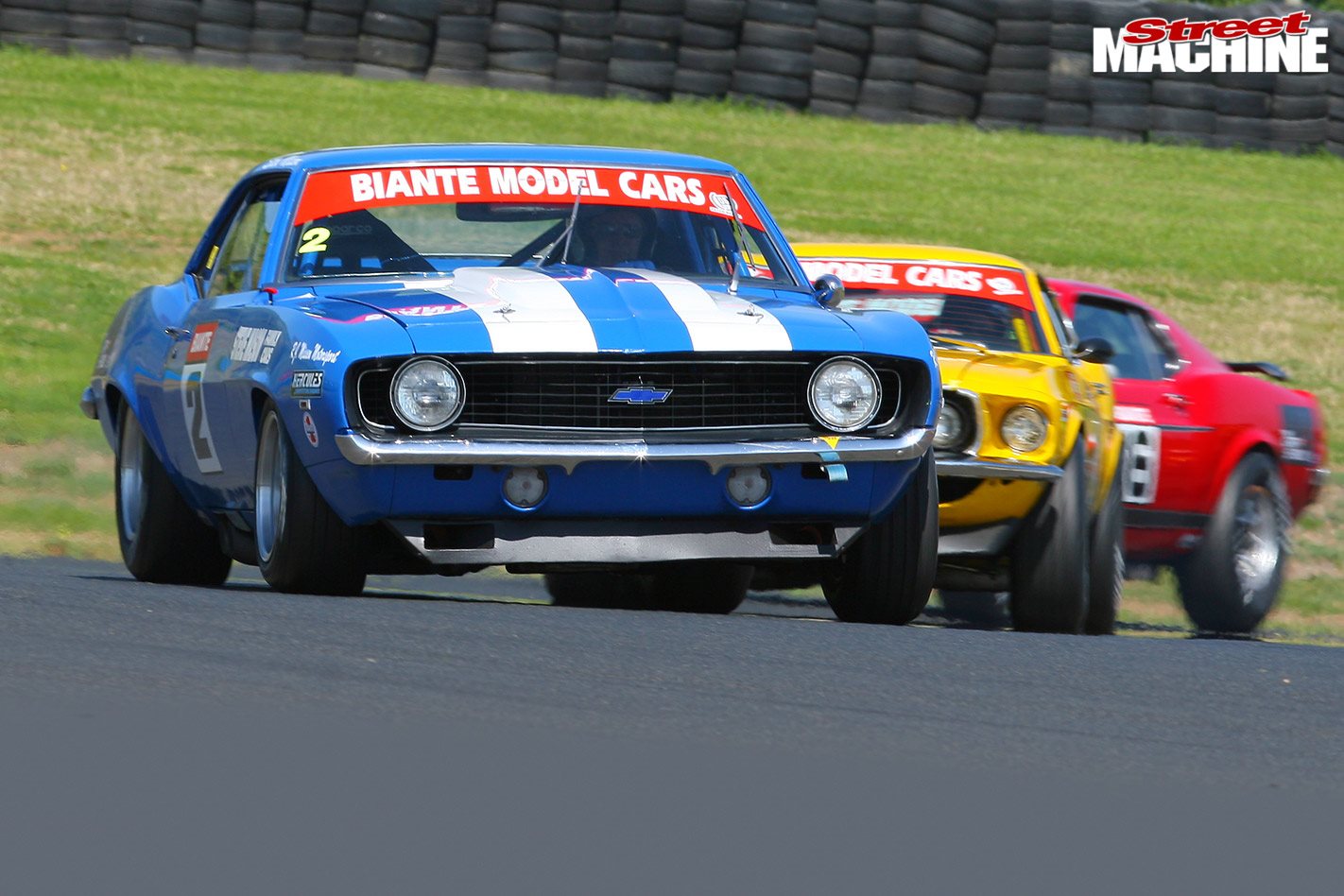 Do you stick with just the drags?

No, I love all motorsport. We’ve been doing the engine in Steve Mason’s Camaro (above) since 2005 in the Biante Historic series. You’re only allowed to run what parts were available at the time, including factory heads. That car is just a 350 fuellie with a class maximum of 0.060-oversize, standard stroke and Muncie gearbox, and it’s the class leader. This year we have already won the first three rounds. At Bathurst we clocked 181mph down Conrod so it’s a sweet package.

We’ve also held the under-6.0 litre class in the boats for the past four years, so we’re busy.

Did Sydney’s new track bring a different kind of work?

Eastern Creek did; it opened a new door to racing and performance but WSID has done nothing for us. Now there are lots of people with toolboxes but not a lot with the training and skill to go with it. The internet has taken a lot of work from engine builders. Today, people push a button and buy a US engine. We will get some work in the near future servicing those motors but at the moment people ask for a price on a motor over the phone and compare it to a crate motor.

What are your thoughts on these crate-style motors?

You need to look at the people behind these engines. I can’t say they are all no good but they are basic. 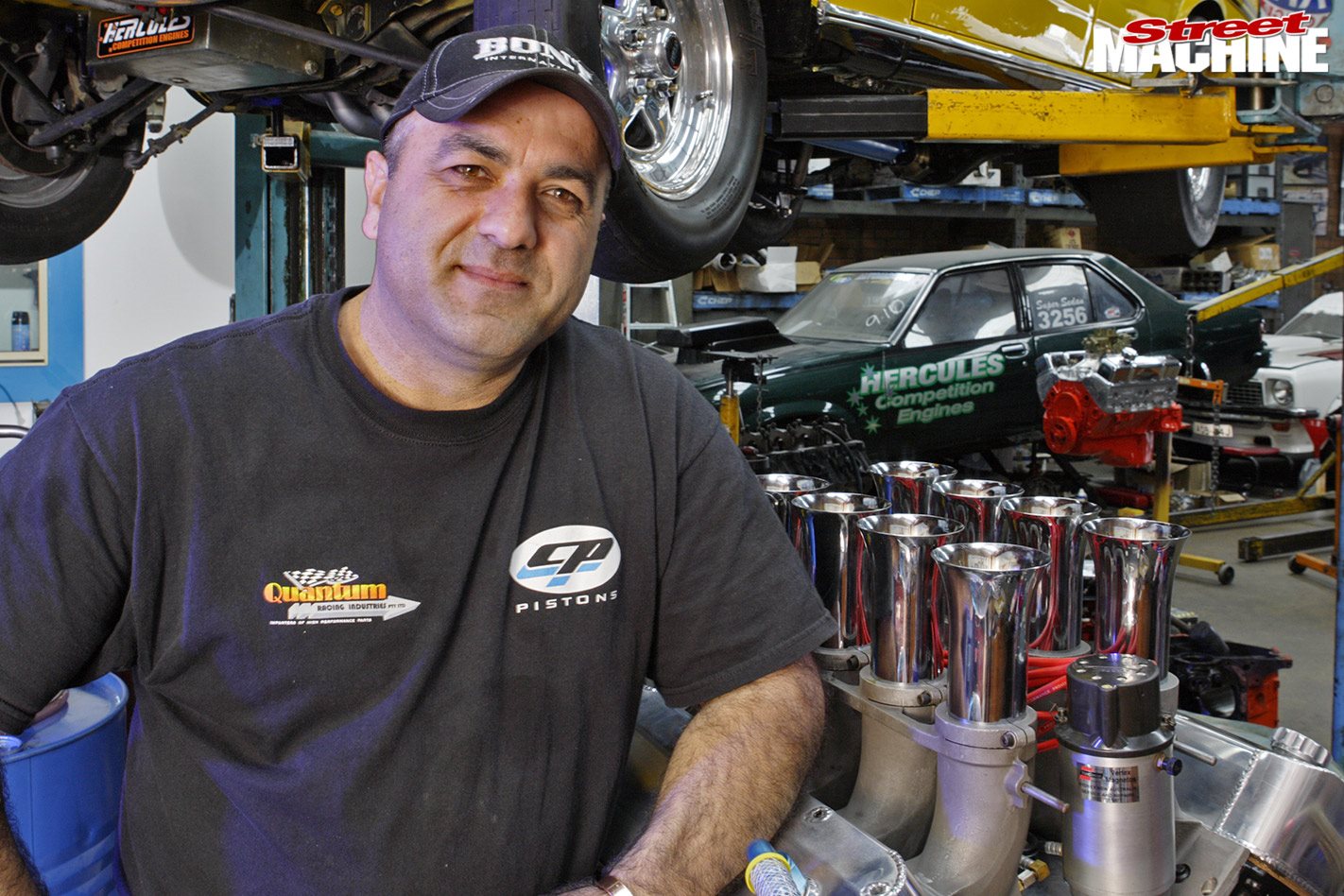 Do you think of yourself as an engine builder or tuner?

I have never called myself a builder; even at Hercules Competition Engines we all work under a common banner. I like to keep low-key, don’t big-note myself. Other than the back window of a few cars, I don’t advertise. I enjoy building combinations, traditional combinations that I’ve grown up with, and lean towards ‘restricted engine’ work like with the Touring Car Masters.

How did Hercules Competition Engines come about?

So what are you up to today?

I don’t do a lot of the fancy stuff. I guess our glory days are almost over. Our customers are now middle-aged, restoring Monaros and Falcons. We do a lot of work with restricted engines in boats and historic touring cars. In a lot of ways we’re here but we’re not. 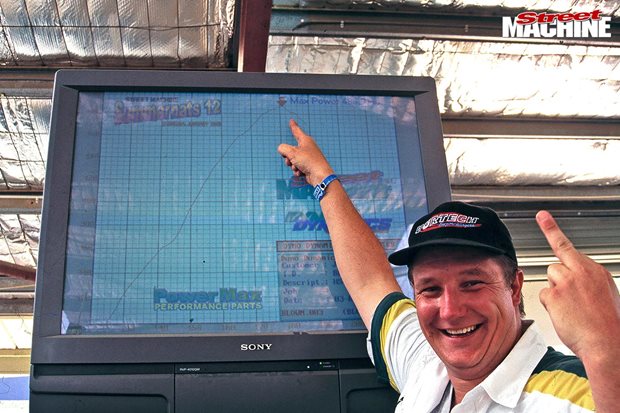