When it comes to iconic Australian customs, they weren't built much wilder than Nick Venardis's radical HD Holden!

THE GRANDPA look is a street machining mainstay of the new millennium. Born from the days of high-powered yet inconspicuous street sleepers, builds with grandpa-spec styling have snowballed, as restored-bodied cars – and general intolerance for our modified car history – takes a stranglehold of the modern-day hot car scene.

But for the 50 years prior to Y2K, the last thing you wanted was a car that looked like your grandpa’s. Hot rodders chopped roofs and unbolted guards, while our foundation custom and street machine fraternities binned factory chrome, hubcaps and venetians as they aspired to build individual and unique rides that would never blend in at the bowls club or RSL. 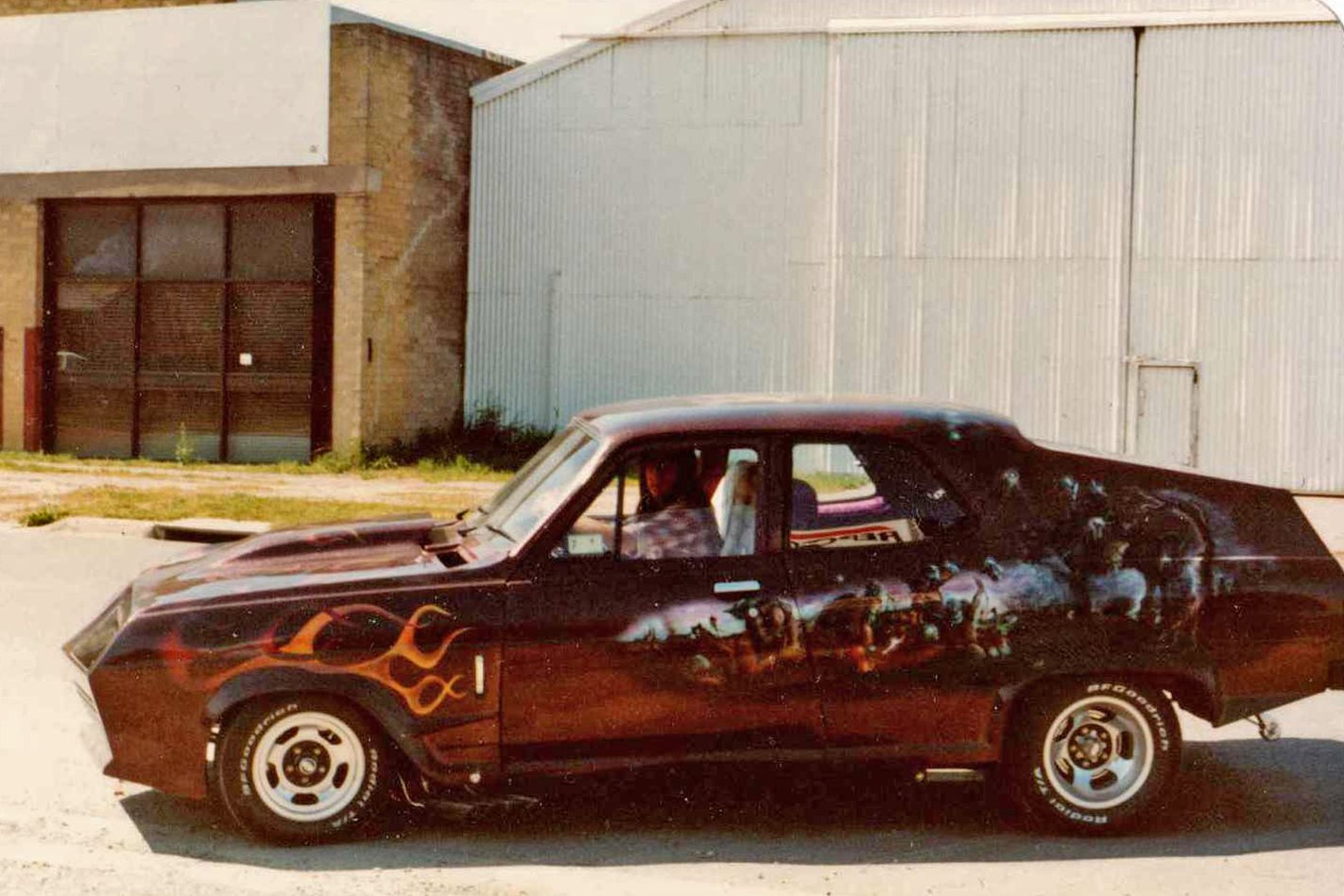 These cars ruled supreme throughout the 60s, 70s and 80s, with all manner of home-soil Holdens, Falcons and Valiants treated to myriad body mods and changes. Brand allegiance was snubbed, with builders choosing to source the best parts for their plans regardless of the donor make or model. The craftsmanship of many of these builds was mind-blowing, as passionate Aussies dreamed of emulating their hero US builders such as Barris, Winfield and Roth and got busy in their back sheds. 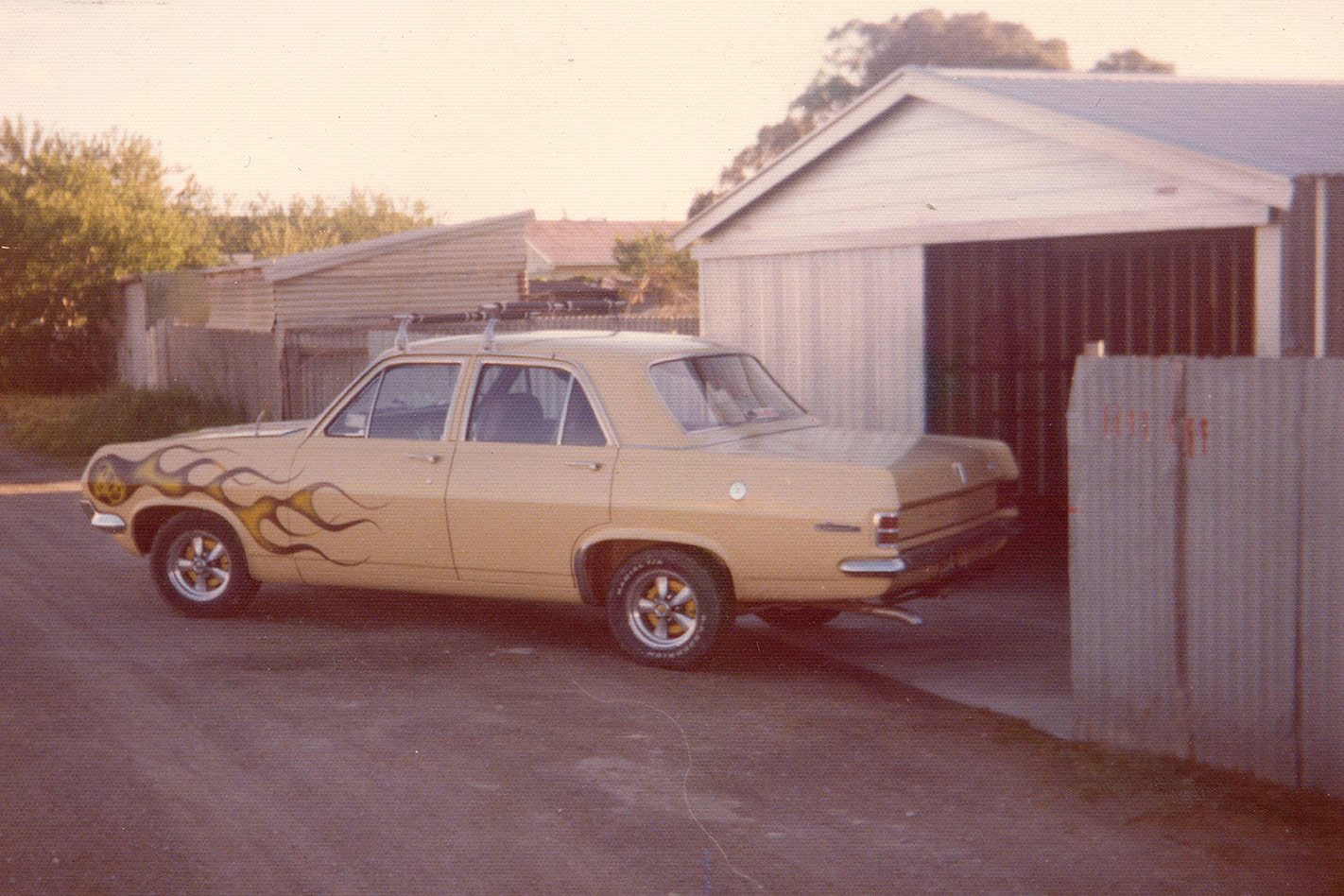 “In the mid-70s I was working as a trainee design draughtsman for a transport company, but I dreamed of building custom cars after watching TV shows like The Munsters, Batman and The Green Hornet,” he says. “George Barris definitely kicked off my passion for customising and treating cars as an art form. I bought an HD Holden from my dad in 1975 for $800 to use as a reliable daily. He was the original owner and it was your typical grey and white Special with a red vinyl interior.”

Nick wasted no time hotting up the HD. The 179 was swapped out for a stout 192-cuber running a steel crank, Yella Terra head and triple Stromberg carbs. He resprayed the car Sudan Beige and added a neat flame job and Tasman mags. 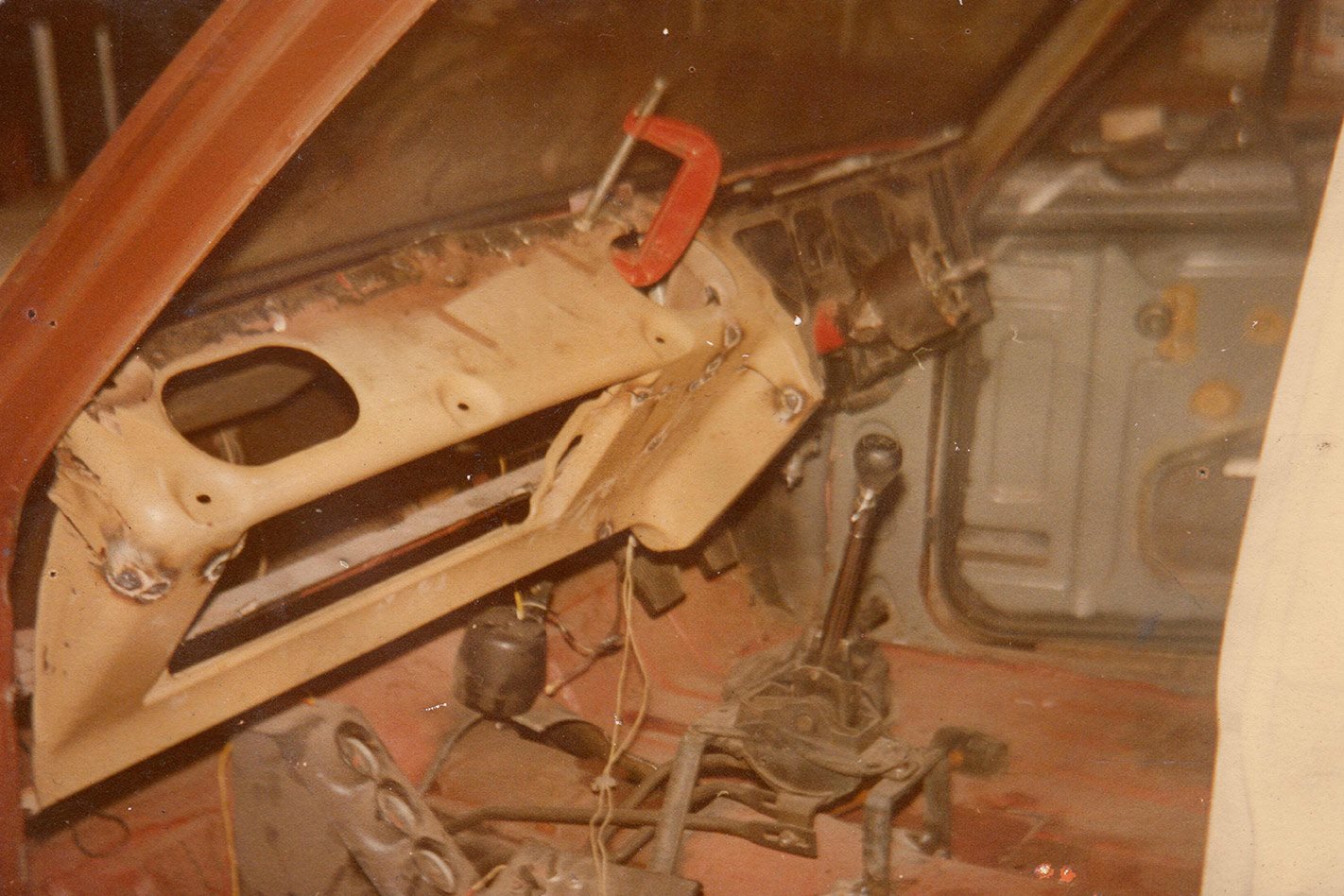 The Holden was looking pretty sweet in this now-period-perfect guise, but Nick had grander plans: “I wanted to build something full-custom, and took it on as a personal challenge to completely transform a car body and its engineering. I planned out a design that would be creative, radical and innovative.”

Nick put theory into practice by donning nearly every trade cap imaginable to complete the build. Sheet-metal fabrication, welding, paint, panel, mechanical and the artwork were near-wholly completed by Nick over the duration of the six-year build. 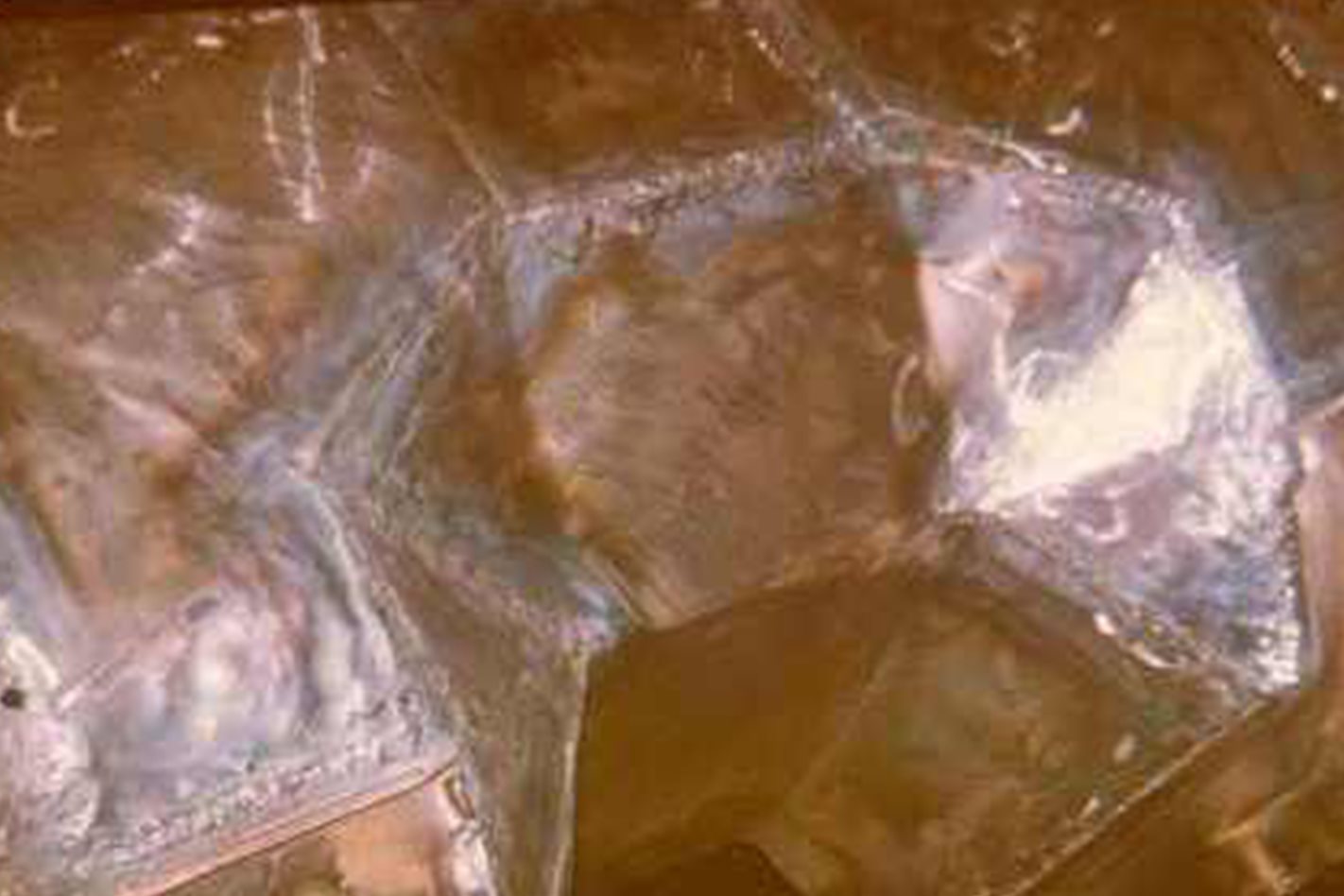 The bodywork was extensive, with the original HD shell converted to a two-door hatchback configuration featuring a steel tilt-front. The front doors were fitted with HQ handles and had their skins extended to match the fabricated rear quarter panels – inspired by the chiselled profile of the XA-XB Falcon hardtop range – and formed to incorporate LC Torana side windows and frames. A Perspex rear hatch was made, which tapered down to a boldly styled beaver panel incorporating ZH Fairlane tail-lamps, a Charger fuel cap and a custom-made rear bumper. 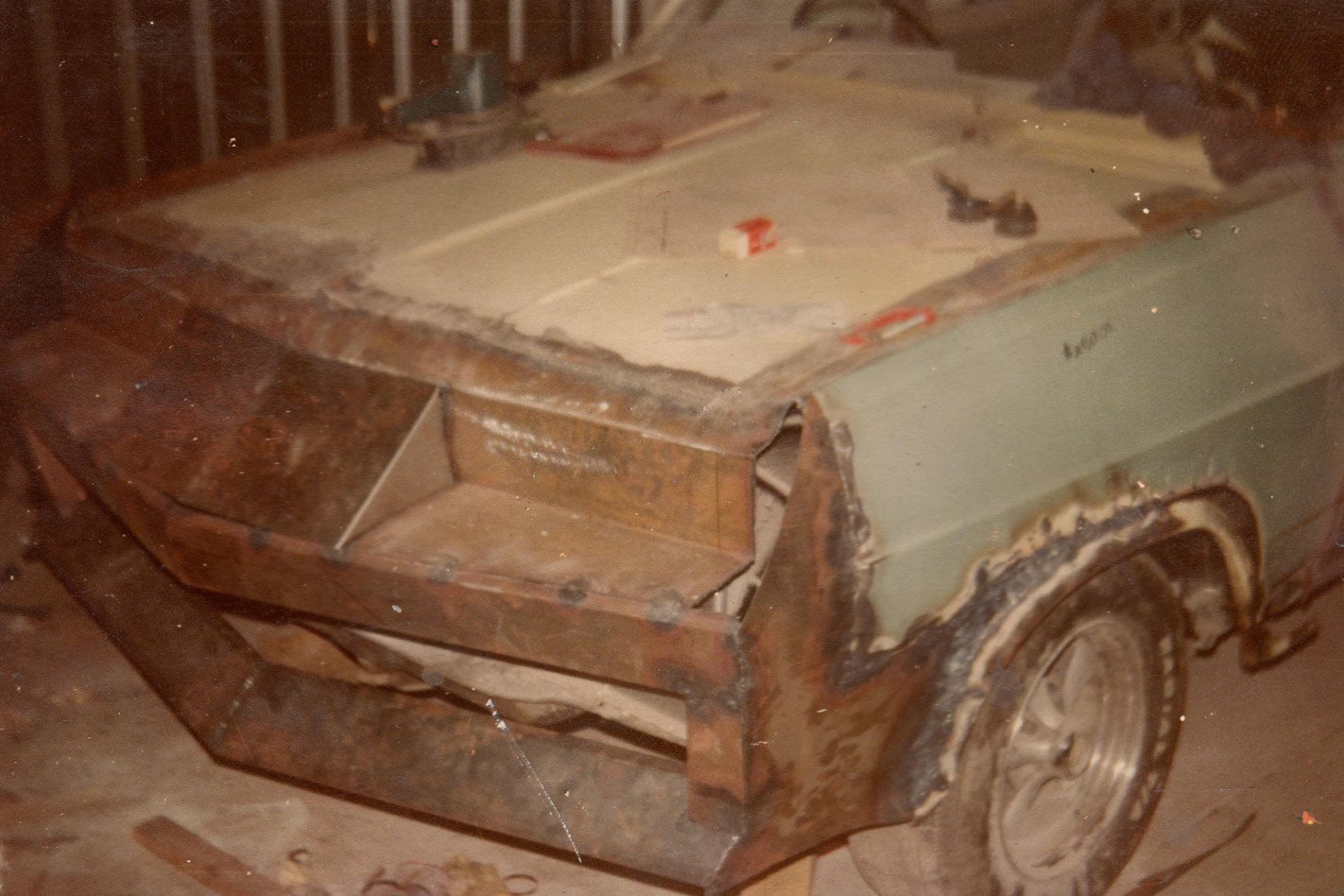 Nick’s initial tilt-front design was based around an HJ Statesman nosecone, but he felt it wasn’t radical enough nor in keeping with the unique methodology behind the project. “The overall shape of the car needed to be specific, with bold, defined bodylines,” he says. “I designed a new tilt-front in 1978 based around an HD bonnet and guards but reworked with a custom sheet-steel nosecone, steel tubular grille, FC Holden wheelarches and Triumph Herald side latches. A Torana bonnet scoop was added, which was the only fibreglass piece on the car.”

With the mammoth body construction completed it was time to lay down a suitable hue. Jack-of-all-trades Nick wielded the spray gun to the tune of multiple coats of Dulon Burgundy red, which he overlaid with a gold, silver and red flame job intertwined with ‘gas’ flames in blue. 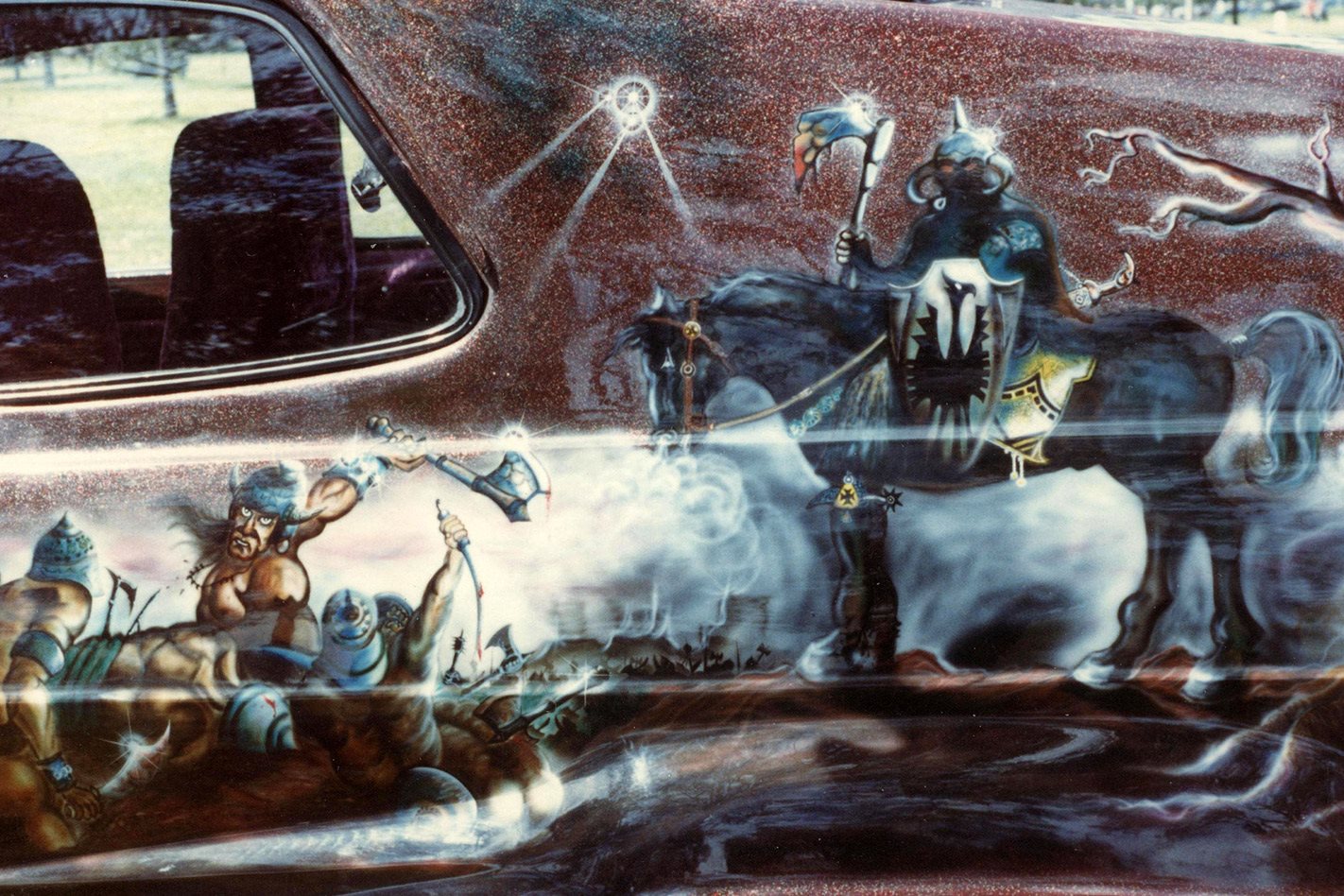 The extensive airbrushed murals were more of Nick’s handiwork, inspired by popular fantasy and science fiction artists Frank Frazetta and Boris Vallejo. “It took two weeks per panel to paint the murals, including the one on the roof, which required the use of scaffolding. It was a massive job but once the exterior was sorted I sealed it all with multiple coats of Dulon Super Clear.”

In between the body mods, Nick had been building a full chassis for the HD; a completely separate assembly to the body was constructed using RHS rails tied with square tube for diagonal support. “The chassis was born out of my desire to re-engineer the standard Holden platform but also to remove the need for the front subframe,” he says. “There was no point having a tilt-front that opened to reveal ugly inner guards; there had to be open space to show the engine off at its best.” 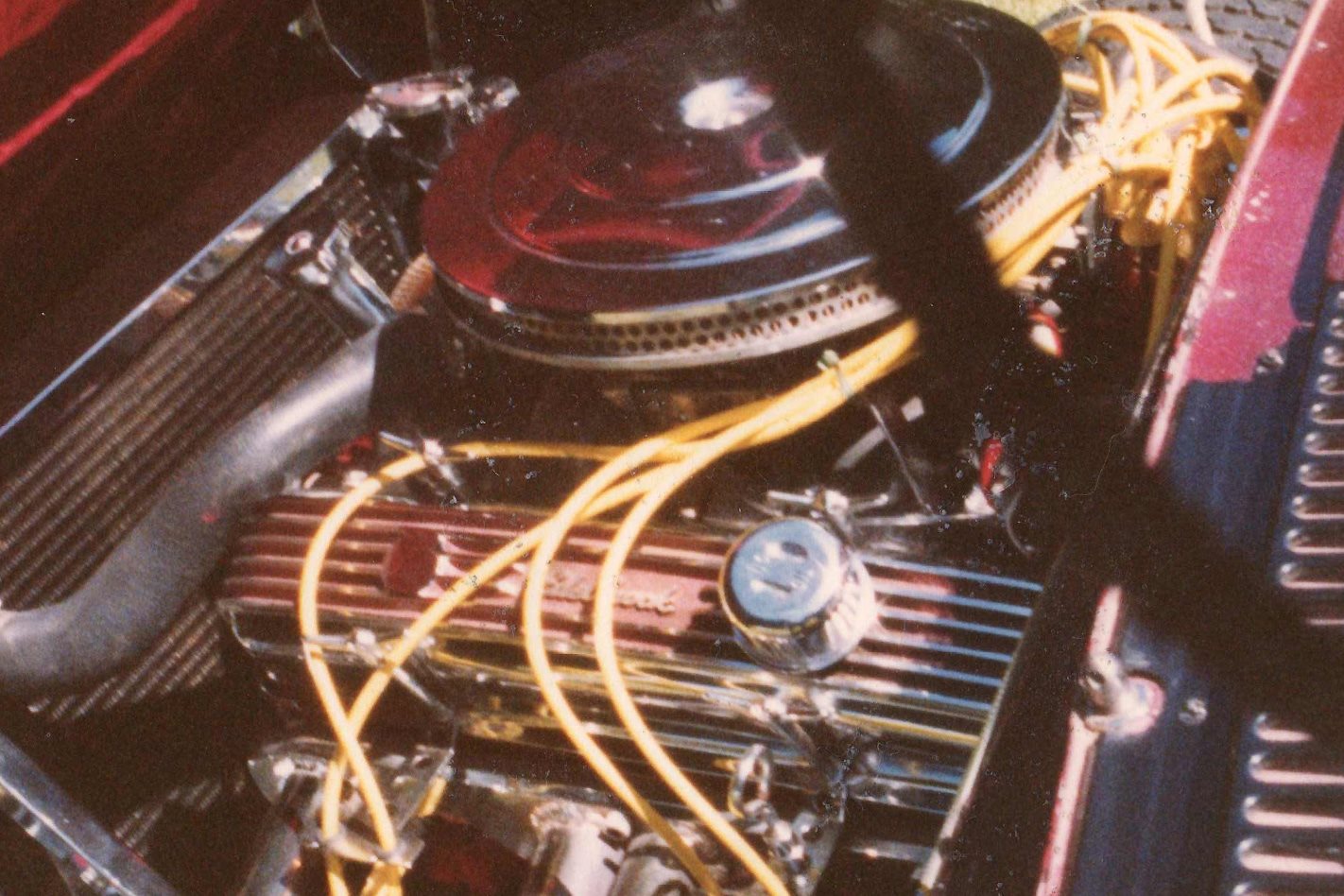 The donk in question was a stout 327-cube small-block Chev, rebuilt with TRW forged pistons and a Revmaster solid cam, topped by fuellie heads fitted with an Edelbrock intake and 650 Holley double-pumper carb. The exhaust system started and finished with a set of chromed zoomie pipes that exited under the front guards, but luckily for Nick he never copped any heat about excessive noise. “The police pulled me up occasionally, but more out of curiosity for the HD’s looks than anything else. They even gave me a jump-start once and still didn’t bat an eyelid.” 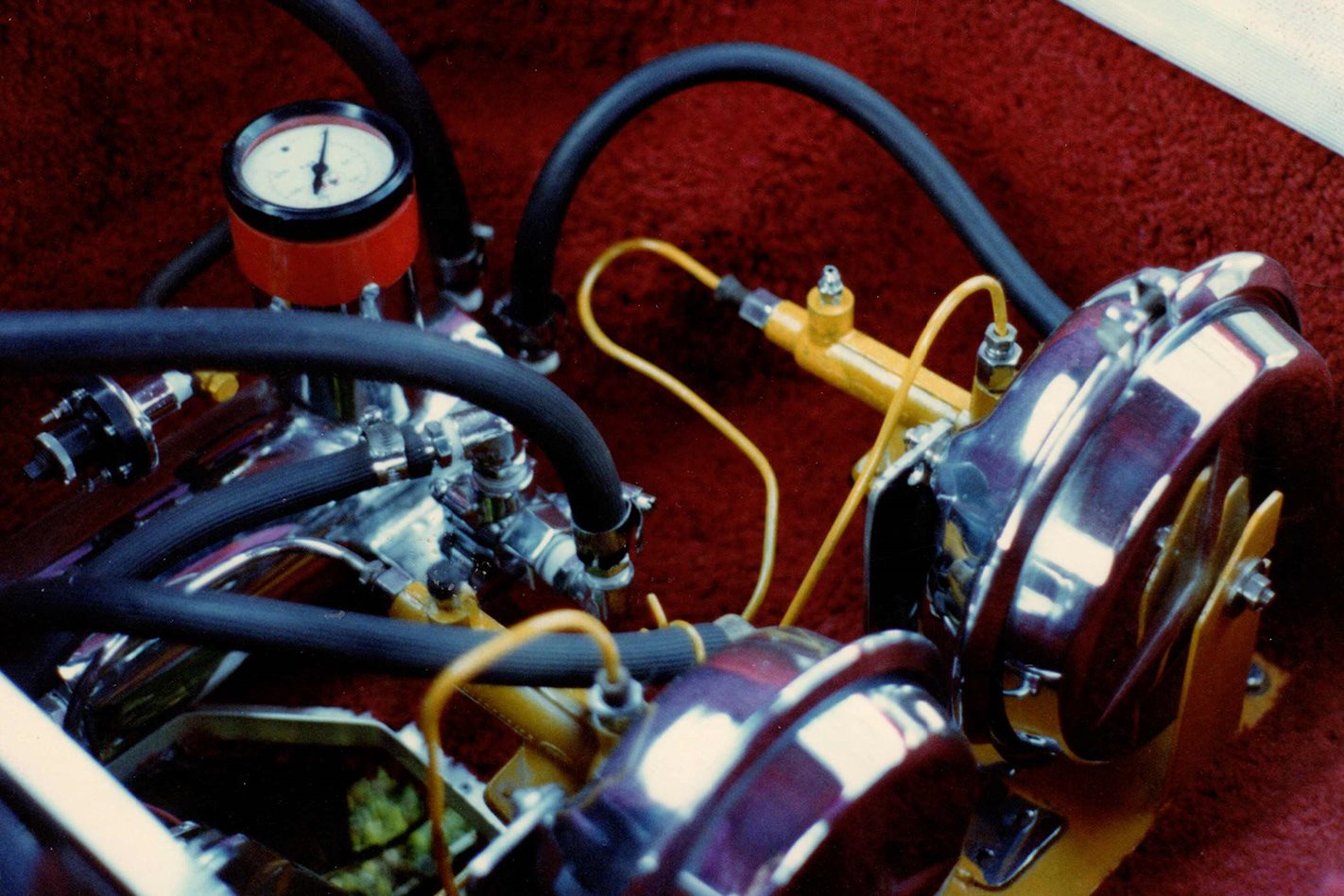 A lightened flywheel with a Zoom clutch assembly transferred grunt through to a Saginaw four-speed trans and 4.11-geared Salisbury diff, the latter located by a unique Nick-designed semi-independent rear suspension assembly. An HR disc front end was adapted to the custom chassis, with the braking system enhanced using a mix of VH40 and VH44 remote boosters and an auxiliary vacuum tank. Magnum Eliminator rims in 13- and 14-inch diameters were sourced from local Adelaide wheel icon Sampson Engineering.

The interior was treated to the same attention to detail as the exterior and undercarriage. The now two-seater sported Fairlane Marquis buckets for driver and passenger comfort, while a modified HQ dash assembly was welded in to replace the original. Red carpet and velour were used throughout, with the newly formed hatch section housing a fire suppression system and the aforementioned twin brake boosters. 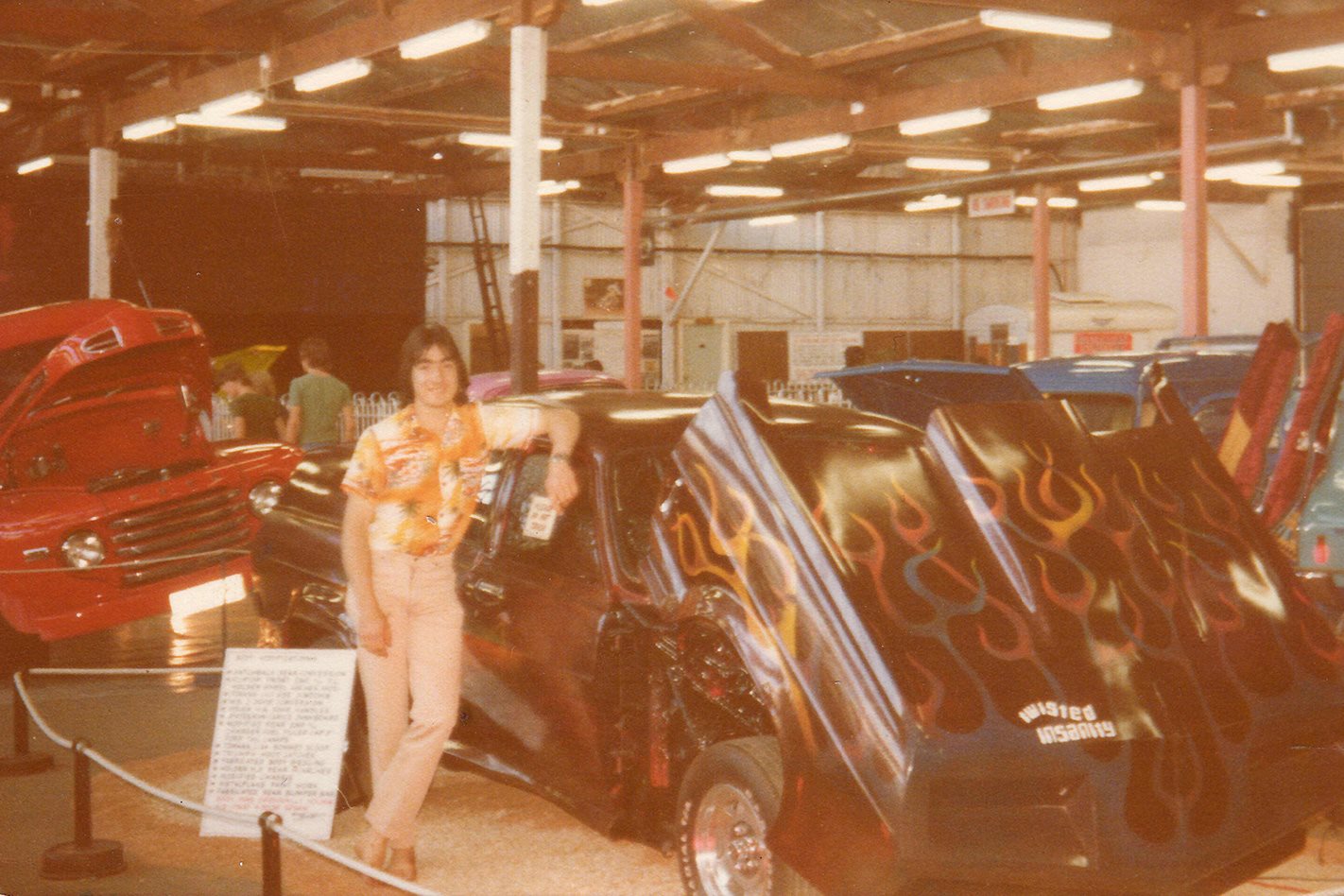 The HD was first displayed at the 1978 Adelaide Hot Rod Spectacular as an unfinished project under the name ‘Twisted Insanity’, before returning in ’81 as a completed build. Renamed ‘Strip Tripper’, Nick and the HD attended numerous shows and earned a swag of trophies. It even appeared in the legendary Australian film Freedom starring Jon Blake and Jad Capelja (Fanging Flick, SM, Oct ’16). “Do you remember the red panel van that got crushed in the film? I did its interior work for the producers and when they saw Strip Tripper in the shed, their jaws dropped. They just had to have it in the movie; if you blink you will miss it though,” he laughs.

As the 80s rolled on, the interest in customs began to taper off and Nick got busy with family and work commitments. The chassis and running gear were sold in 1989; the body was kept until 1998, when a bloke spotted it and insisted on buying it – he remembered the car from years earlier. That was the last Nick ever heard of it, and he’d love to know if the body or chassis still exists. 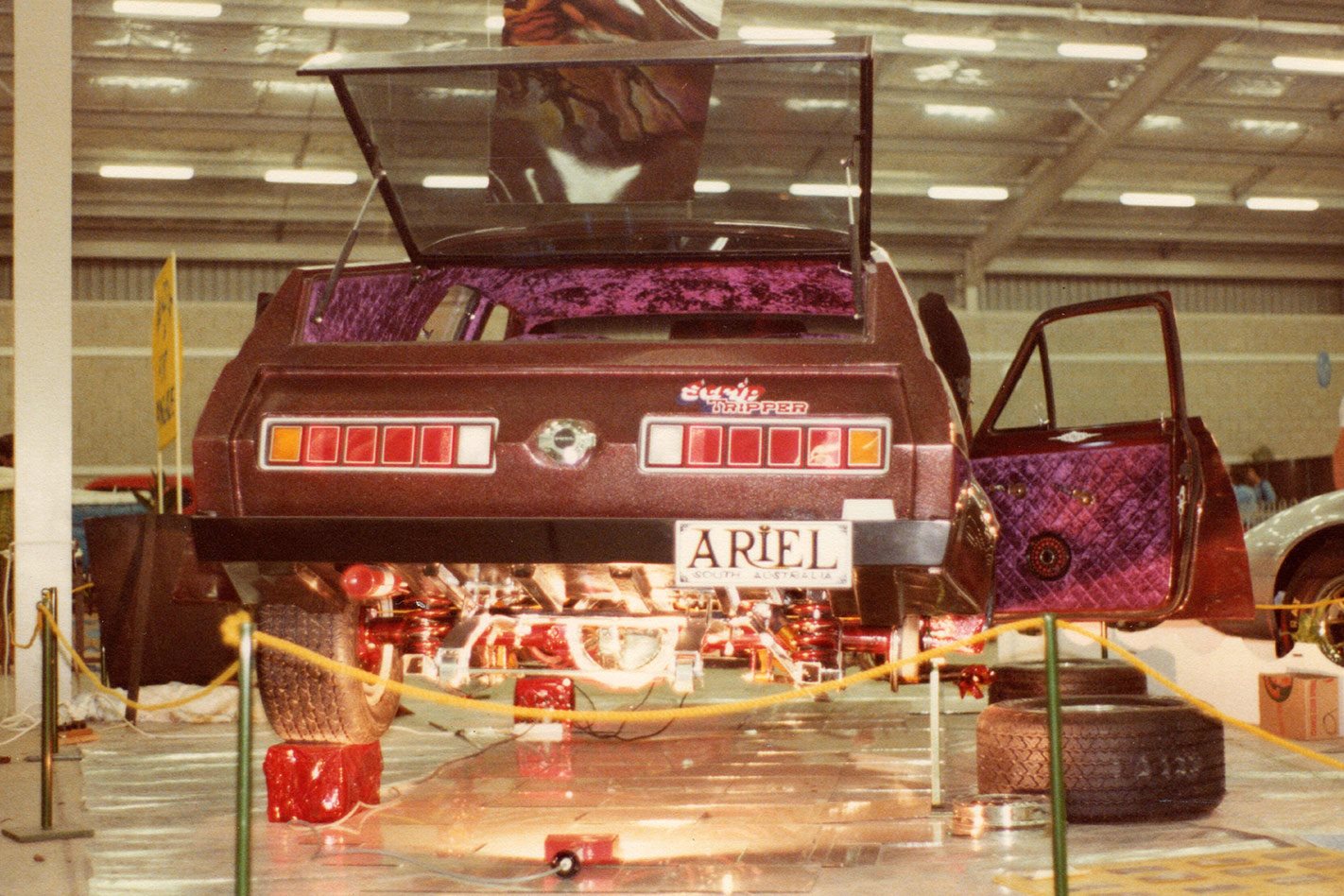 “True story: Not long after I finished the HD I was approached by producers Byron Kennedy and George Miller – yep, the Kennedy-Miller of Mad Max fame. They wanted the car for Mad Max 2 and offered me $30K for it. I was told in no uncertain terms it would be destroyed in the movie, so I declined their offer; sure it was a lot of money, but I’d poured six years of my heart and soul into that build and couldn’t bear to see it wrecked virtually straight away. That is my biggest regret to this day; not because of the dollar value involved, but I should have let it become immortalised like the other Max cars.” 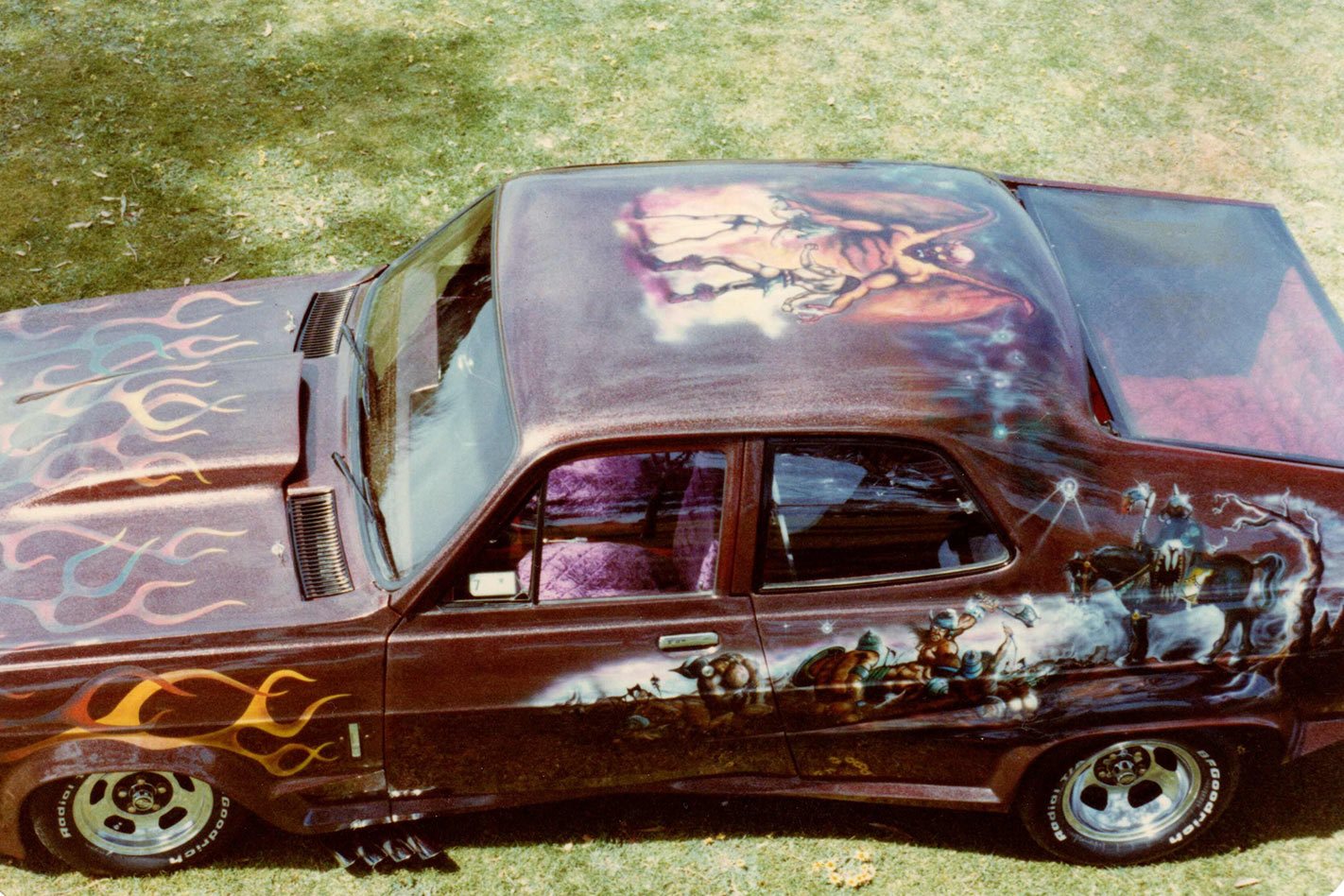 The build of the HD was responsible for the start of Nick’s business, Ariel Customs, which operated out of the Adelaide suburbs of Beverley, West Croydon and finally Lonsdale for many years. “I’d purchased a fair amount of tools and machinery to fabricate and manufacture parts for the car, so it seemed like the next logical step,” Nick says.

Ariel Customs had a hand in some of Australia’s most recognised custom builds and restorations, with Nick’s diverse skillset making him able to complete the majority of his customer work in-house. 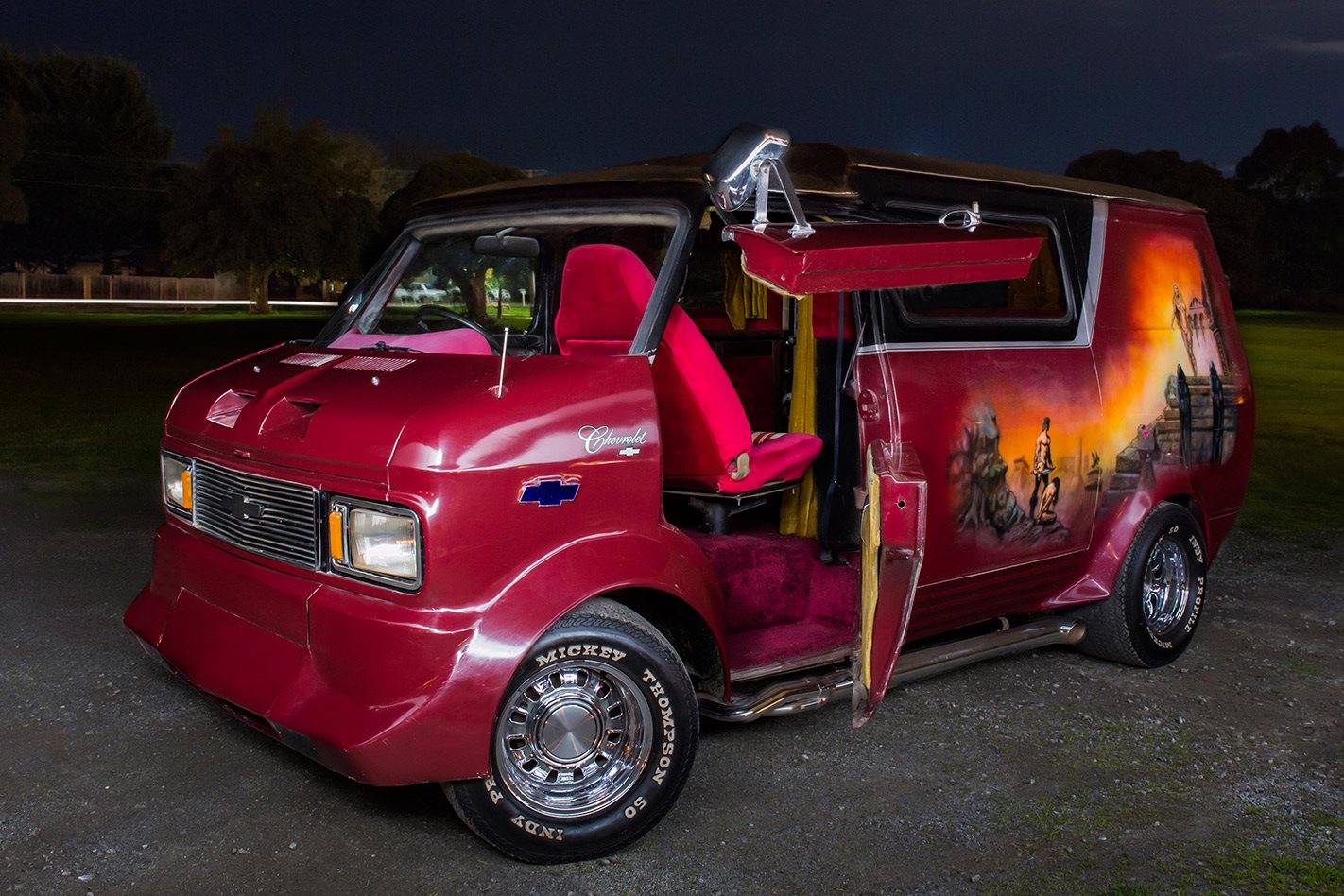 This included Danny Woodham’s Bedford van The Judge (above), which came to Nick for its calling-card gullwing door conversion. A Torana-fronted Escort van was one of many panel vans to receive the Ariel treatment through the 80s, while the pure-horn custom trike (below) that starred in Mad Max was rebuilt and painted by Nick in 1992. 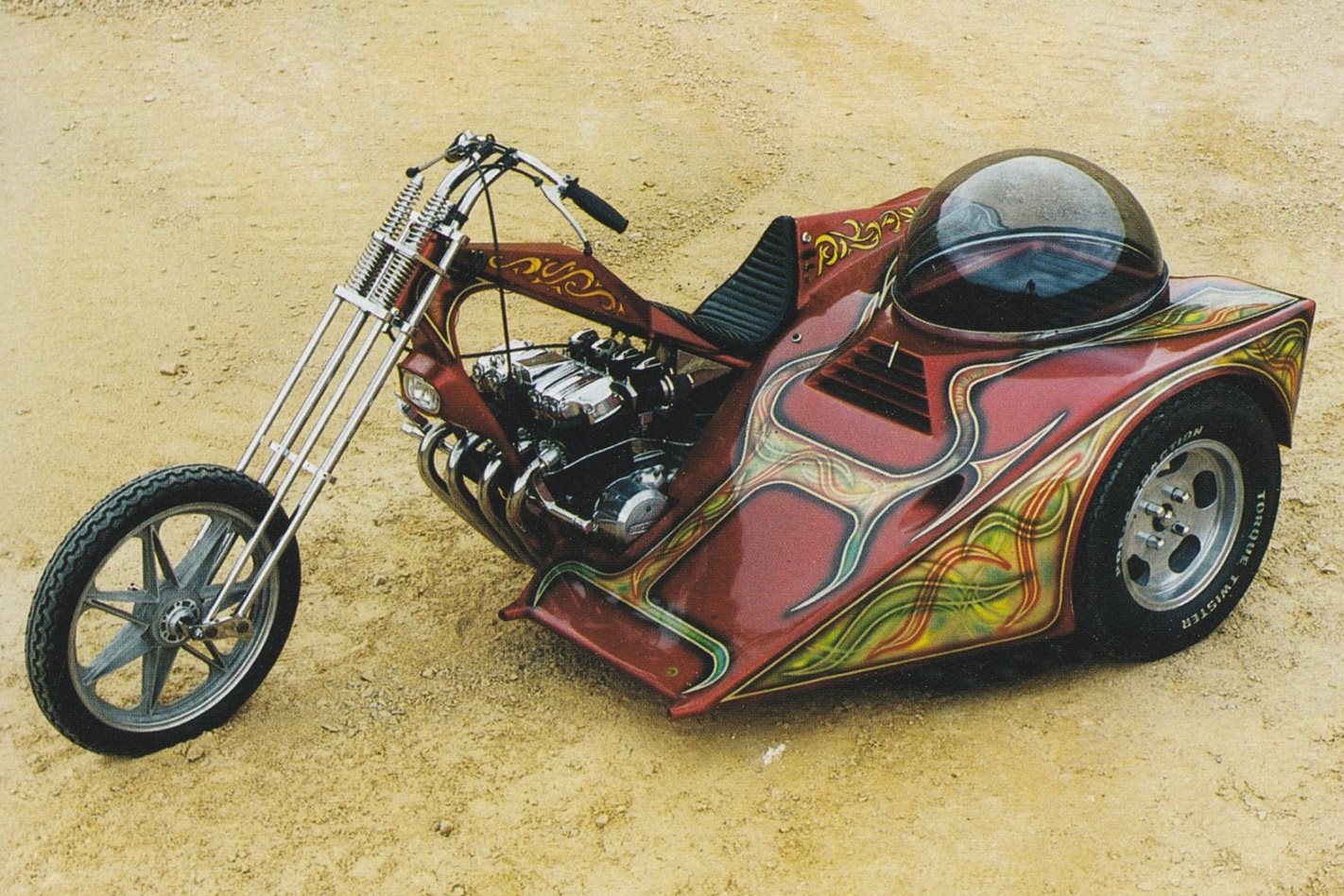 “Our business changed with the times and when custom work began to fade, I ultimately rebranded the shop as Marion Welding Services,” Nick says. “These days I’m a high school design and technology teacher, where I pass on the skills baton to the next generation.

“I do miss the custom fabrication side of building cars though; it was my calling from the very start and I really didn’t want that era to end.” 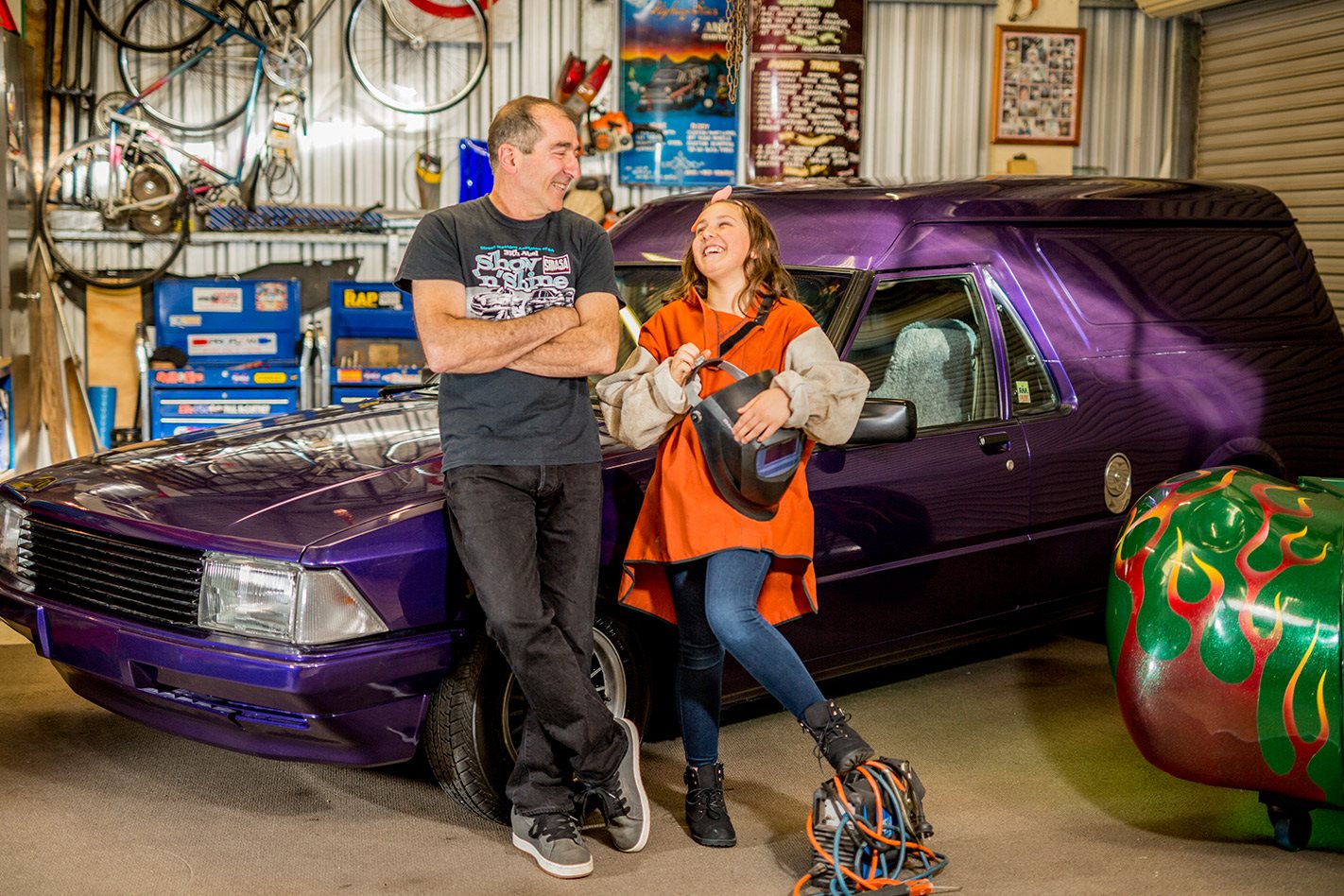 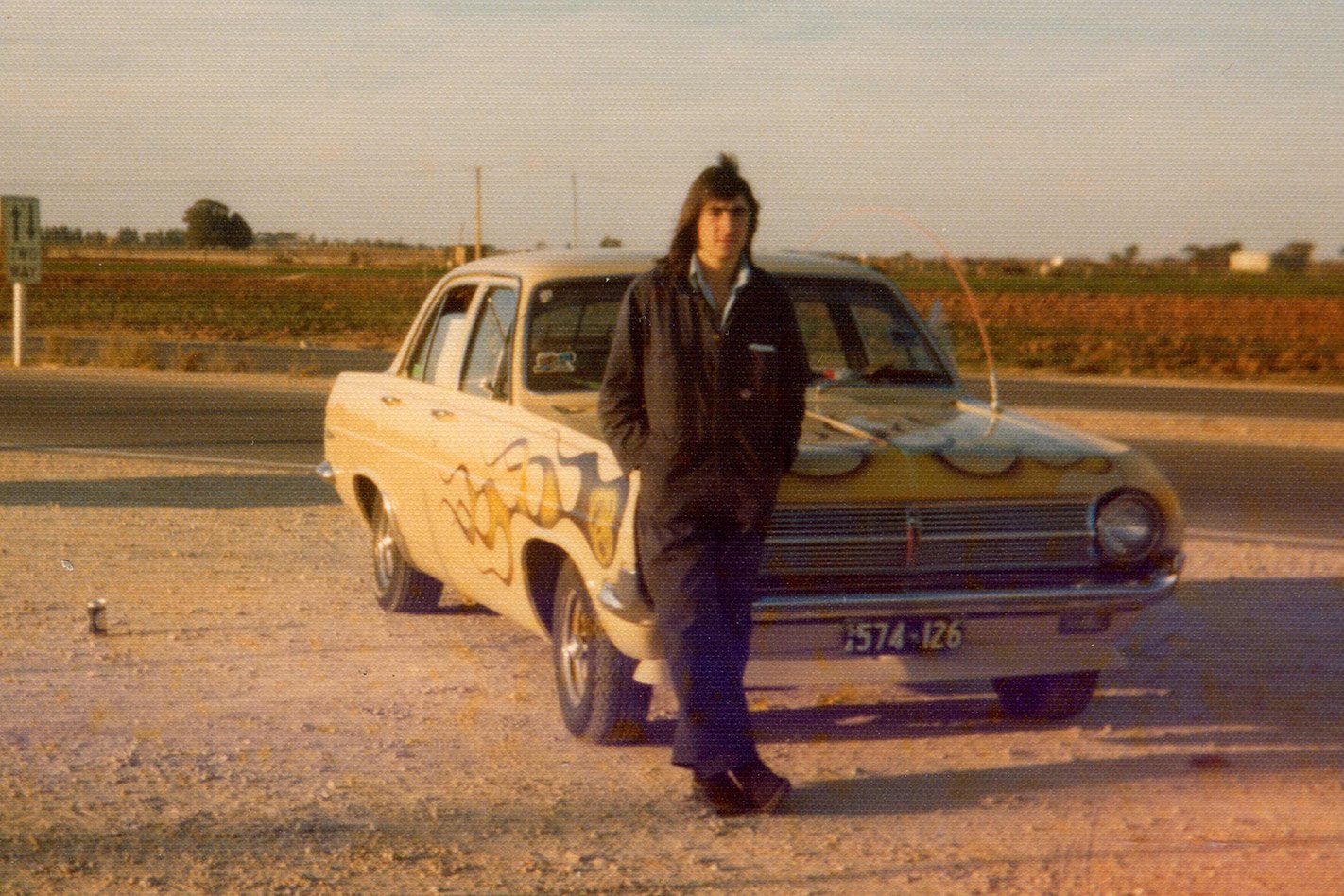 1. Nick bought the HD off his dad and dropped in a hot 192, added a flame job and a set of Tasmans, but had bigger plans. “He wasn’t sure how I would accomplish the complex nature of the HD’s design and build. But he trusted in my vision and was proud of my determination that saw the car take shape and eventually win major awards.” 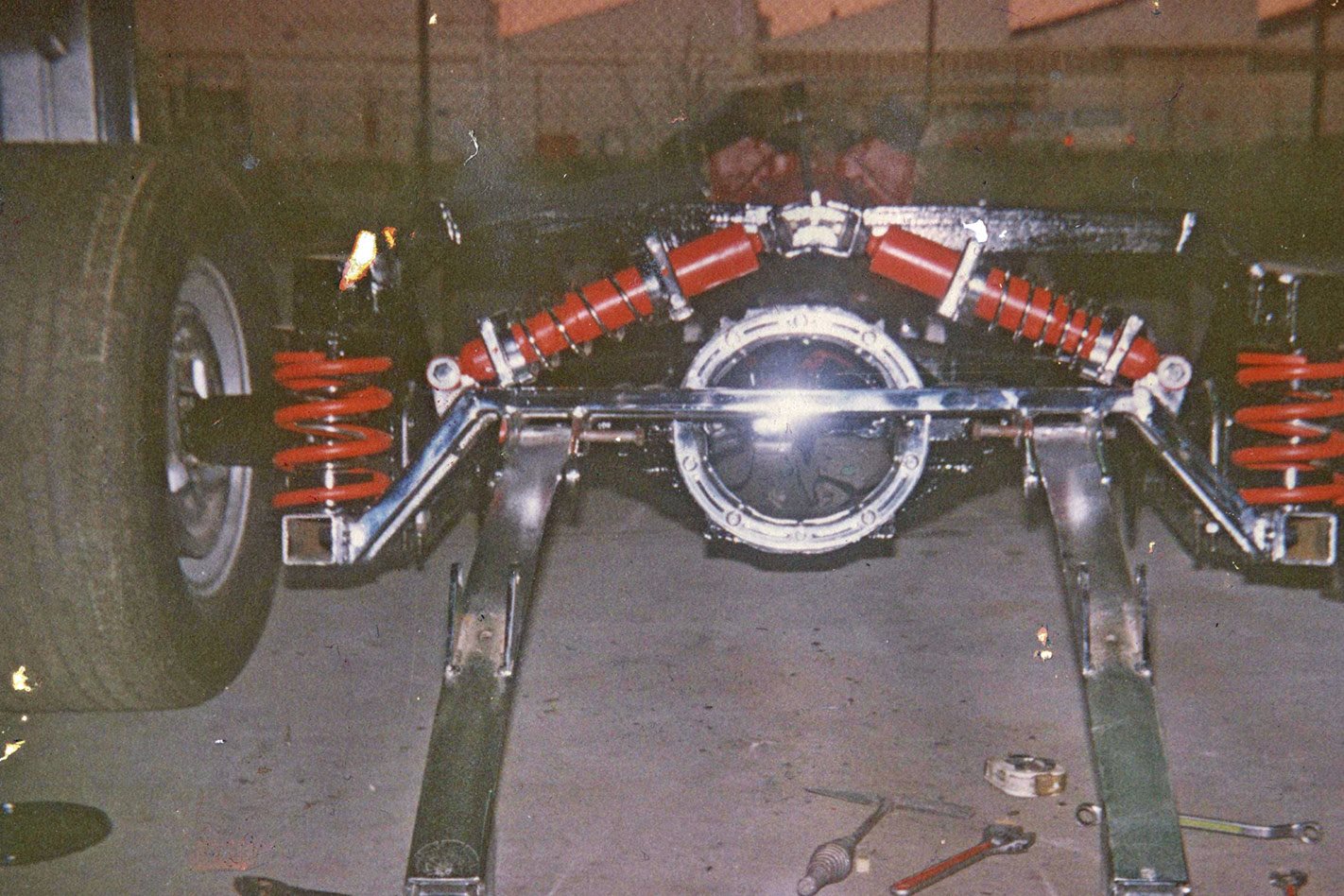 2. The innovation wasn’t confined to the HD’s exterior – Nick created his own semi-independent rear suspension as well. 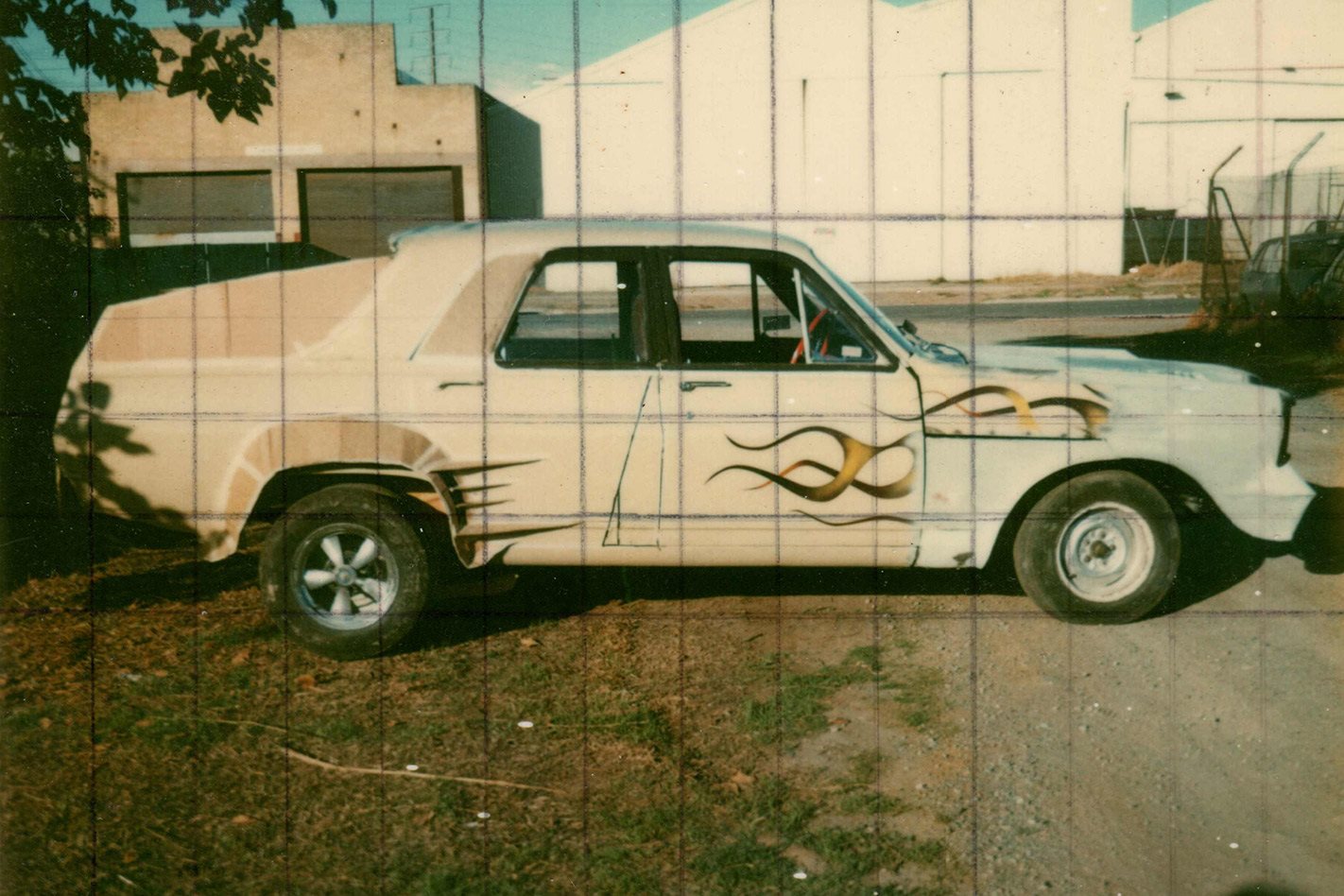 3. Mock-up stage, with the body mods planned out with cardboard. 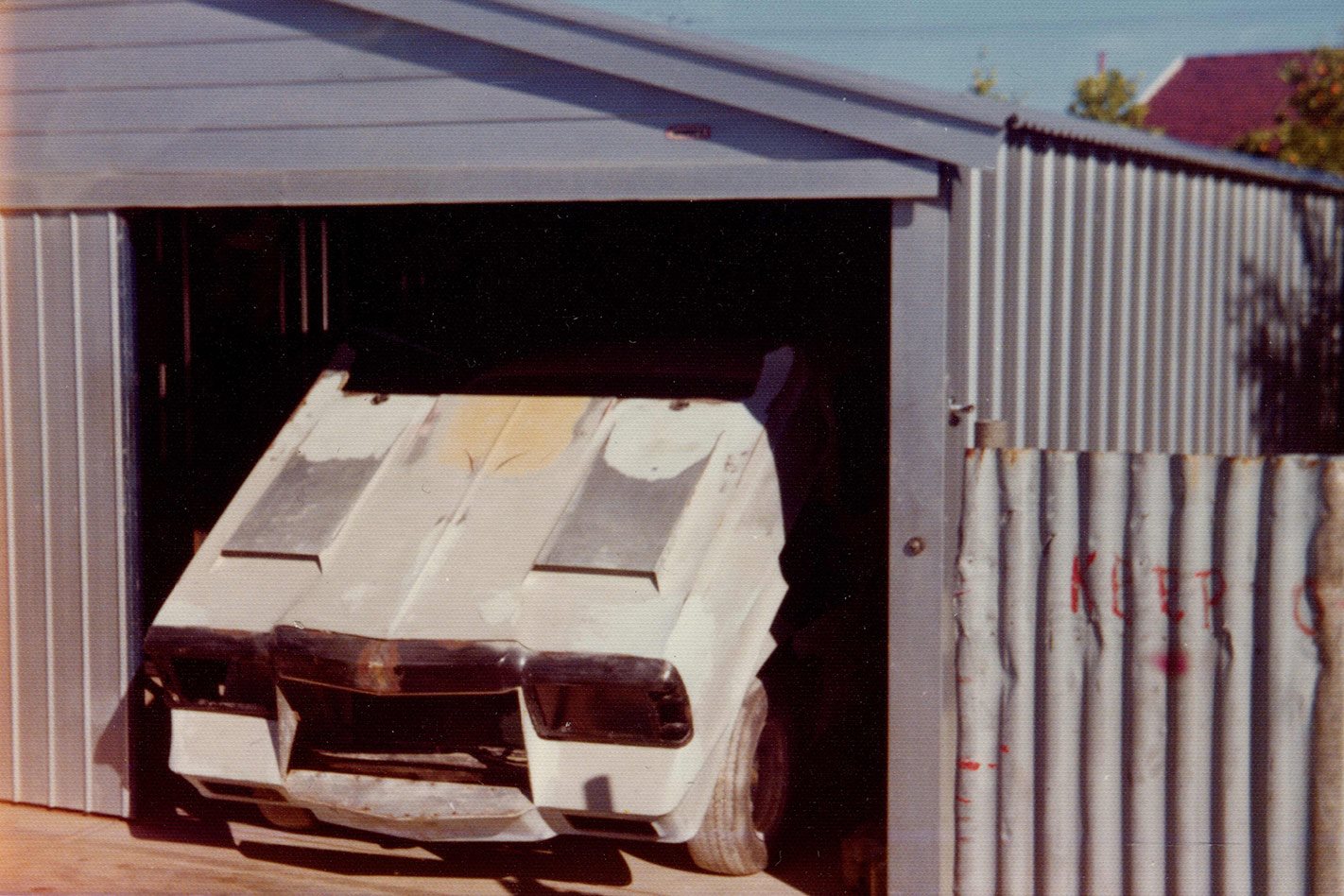 4. The six-year build of Strip Tripper was completed in Nick’s backyard shed in Adelaide’s west. This shot shows the original tilt-front design based around an HJ Stato nosecone. He decided it wasn’t radical enough, and ditched it. 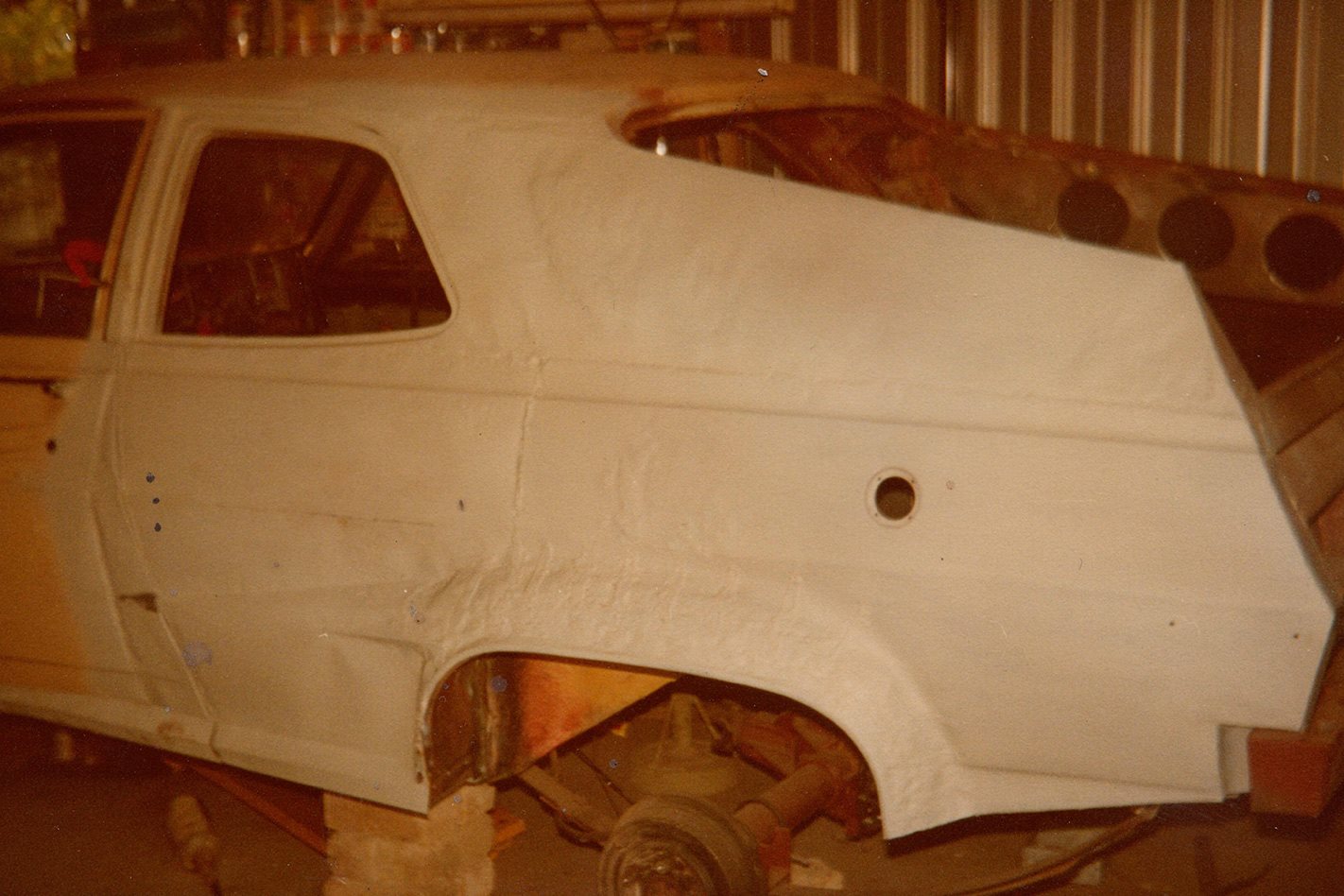 5. Shaping up the Falcon hardtop-inspired rear quarters in steel. 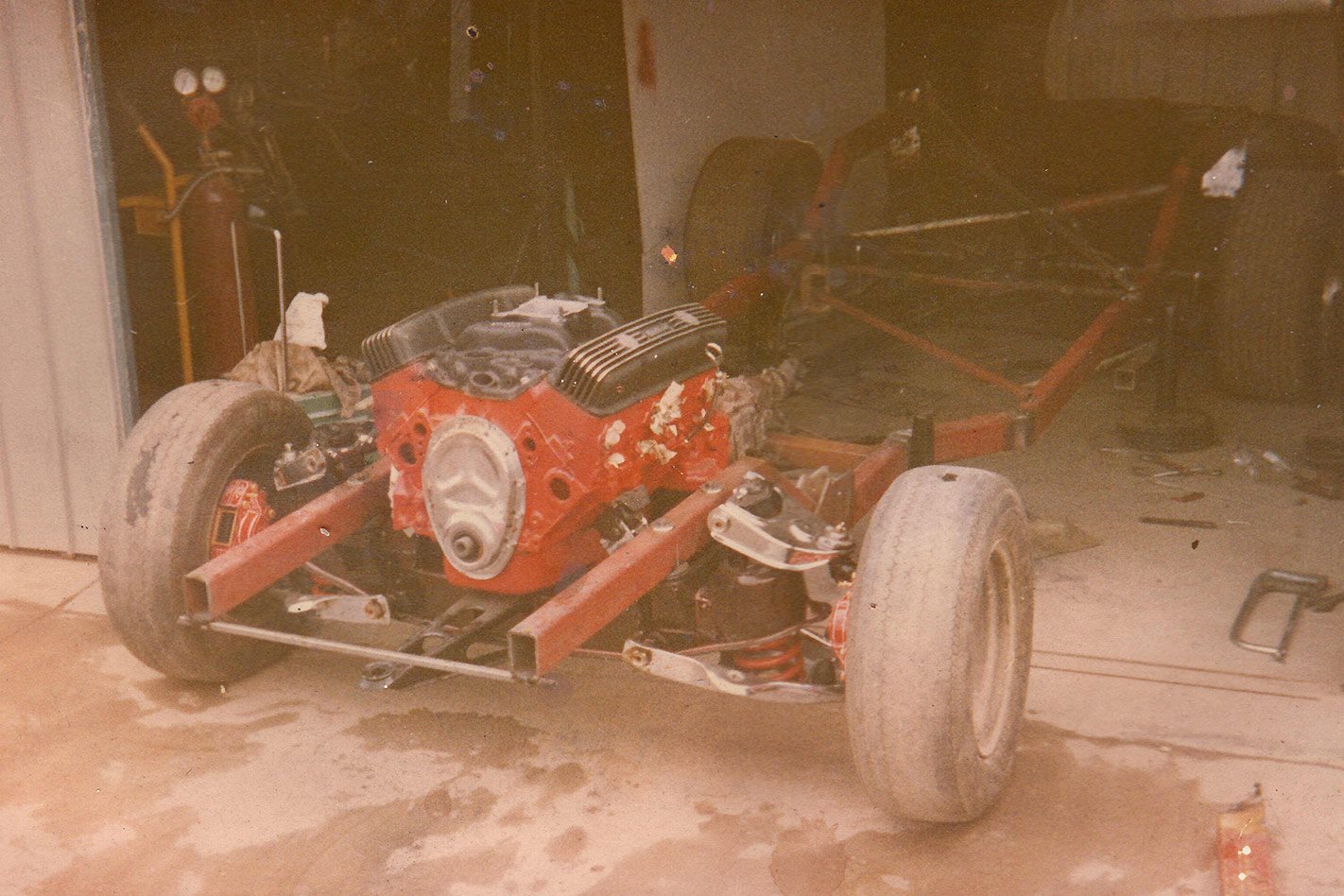 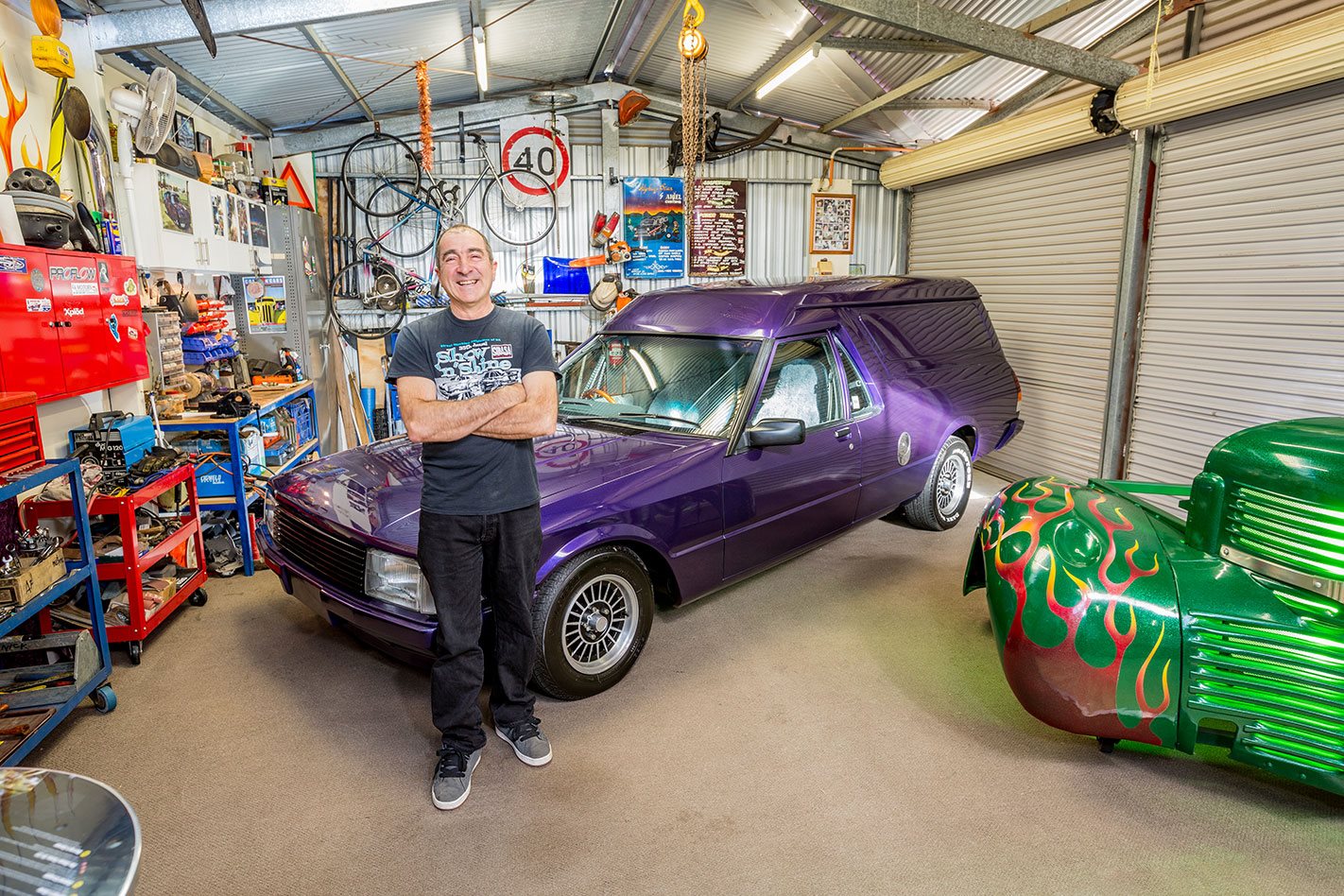 Next on Nick’s agenda is a new business venture. “My wife Jenny and I have always wanted to work together and are soon to open Auto Café Adelaide at Beverley,” he says. “Naturally, it is a very car-oriented coffee shop with a 1945 Fargo cappuccino counter, Bedford truck for a 10-seater table and a windowless XD Falcon café delivery van”