EVERYONE loves a bit of old-school muscle. They look tough, sound great and bring a tingle to the nether region of anyone with half a pulse.

But generally they’re not that nice to drive in day-to-day big city hell. Sure, there’re great times to be had cruising with your mates on a weekend but throw that same rumbling, snarling ride into city traffic on a 40-degree day and it’s Panadol time.

Which is what’s great about modern performance cars. They idle, get relatively great fuel economy, don’t overheat and more often than not they can rip down the quarter in times that’ll leave an original Charger, Falcon or Monaro gasping. If you need more convincing, look no further than Aaron Madex’s pair of late-model screamers.

Now, you could be excused for thinking that Aaron has a thing for EL Falcons judging by his XR6 sedan and XR8 ute. Okay, it’s an XH II ute, but close enough.

“Not particularly,” he laughs. “I don’t even know how that happened.”

It all started with the ute. Back in the day he was driving an XY to work — “It was okay for a weekender but horrid for everyday driving.”

The XH II ute was the last gasp of the boxy body shape introduced with the XD back in 1979. It not only ran the EL front sheet-metal but also its front suspension and rack and pinion steering

So he bought an XH II XR8 ute from his uncle to use as an everyday driver. Only a year old at the time, the Heritage Green Falcon was tidy and perfect for getting to work and back. But soon enough Aaron had an itch that needed scratching and he reckoned a colour change was in order.

“We painted it in a champagne colour but everyone agreed it didn’t look any good — even the painter hated it. We had to paint it something so we went with yellow.”

As a colour choice, they couldn’t have done much better, and with a little smoothing and tweaking the ute looks fantastic. The whole lot was lowered over a set of 19in Simmons rims with coil-overs front and rear and four-spot Porsche Brembos helping with braking.

Fitting the Porsche Brembos to the ute took a bit of work, with custom hats and brackets made to suit. Low manifold vacuum meant a Saab 95 vacuum pump was needed too

The rear leaves are gone; in their place is a custom four-link with a Watts link to keep everything stable, plus mini-tubs that easily swallow those 10in-wide rollers.

To get it super low Aaron used a modified BA two-piece tailshaft, while the BTR rear has fully floating hubs, Romac axles and 4.11 gears to make it bulletproof.

Great colour and an awesome stance are just two parts of the equation, though. It’s when you pop the bonnet that people stop and stare.

The Morrison cross-ram injection looks awesome on the stroker small-block. Aaron tuned the Autronic ECU himself and it makes 348rwkW on BP Ultimate

When it comes to naturally aspirated late-model muscle, nothing beats cross-ram injection — if it’s good enough for V8 Supercars, it’s good enough for us. Aaron previously crafted a sheet-metal twin-throttle set-up but the drivability wasn’t great. That’s not a problem now.

“The throttle response is awesome, and it’s really drivable considering how big the cam is.”

James Young Race Engines put the donk together, using a four-bolt R302 block that has been bored and stroked to achieve 352 cubes.

Topped off with Brodix Track-1 heads and that Morrison cross-ram featuring 52mm butterflies, the deep-breathing stroker produces 348rwkW. For those who don’t speak electric, that’s 466hp at the treads.

Interior in the ute is near stock, except for the shift light. That’s necessary when Aaron spins the 352-cuber to 8000rpm

With all that firepower up front, you’re probably thinking it’s got a C4 or Powerglide to calm it down. And you’d be wrong. Aaron owns DTM Transmissions and he knows the insides of BTR four-speeds like the rest of us know the insides of our own homes.

“They’re a pretty good ’box if you’re not putting a million horsepower through them,” he reckons.

With a 6000rpm Dominator converter and set up for a fully manual shift, the ute rockets off the line like a Pro Stocker but can still cruise with the best of them in fourth gear. But for all its power and drivability, Aaron hasn’t been driving the ute much lately.

“I used to use it a fair bit but that’s just died off over time. There’s too much cleaning and not enough fun,” he claims.

Hmmm, it wouldn’t have anything to do with the new black-as-night XR6 sedan, would it? It looks as good as the ute, has more power and it’s easier to drive on the street.

EL XR6s were never available in black, which is your first clue that this old girl ain’t standard. Sitting low over 20in Simmons rims, the late-model Falcon looks as sleek as it is fast

“I already had the ute and then I built an AU motor that we were going to put in a mate’s EF but that didn’t eventuate, so I ended up with a motor and no car.”

With a big-dollar donk just sitting idle in the shed, he started looking around for a decent carcass to power up and spotted a red XR6 on the ’net. But before he could buy it, the sedan moved to a mate’s caryard — so he grabbed it from there instead.

Overall, it was in good nick. In fact, it had been too pampered because the previous owner had polished through the paint on the edges.

AU engines are regarded as stronger than E-series donks — this one’s good for 600hp at the tyres, helped by a Plazmaman intake plenum and Turbonetics GT-K 1000 snail

“But the interior and underneath were spotless, so it was perfect for me,” Aaron says.

He stripped it down, then sent it to his mate Matty, who coated it in straight black PPG tinter.

Exterior mods are minimal, limited to Fairmont body moulds, debadging, a deleted aerial “and no stupid wing”. Once it was painted, he took a week off work to assemble the XR6, then tuned the MoTeC ECU himself.

He loves the FR-style Simmons rims — “I reckon they’re the best-looking wheels for these Falcons” — and went with 20in rollers on this one. The diff was shortened so he could get more dish on the rear rims, then filled with 31-spline axles, 3.45 gears and an über-expensive Harrop Truetrac centre. Like the ute, the sedan runs a two-piece tailshaft and a tricked-up BTR four-speed, this one with a custom DTM-designed transbrake.

The AU donk seems to be the pick for high-power SOHC combos and Aaron gave it the best of everything — including bigger head studs and a crank girdle for added strength. Howard rods, custom JE pistons and an extensively ported head combine with a massive Turbonetics hairdryer to create 450rwkW (603hp).

Rather than dump the BTR four-speed auto for a C4 or a ’Glide, Aaron beefed up the factory ’box to cope with the rigours of 9sec quarters

At Heathcote, running race fuel and 21psi, the black Falcon screamed down the quarter in 9.8 seconds, crossing the line at 144mph. On the street it relaxes to 17psi and slurps Shell V-Power. If it weren’t for the EL TRBO plates, you’d think it was just another clean Falcon.

“We call it The Mexican because of the plates. Mum asked what ‘el turbo’ meant,” he laughs, “and it stuck. 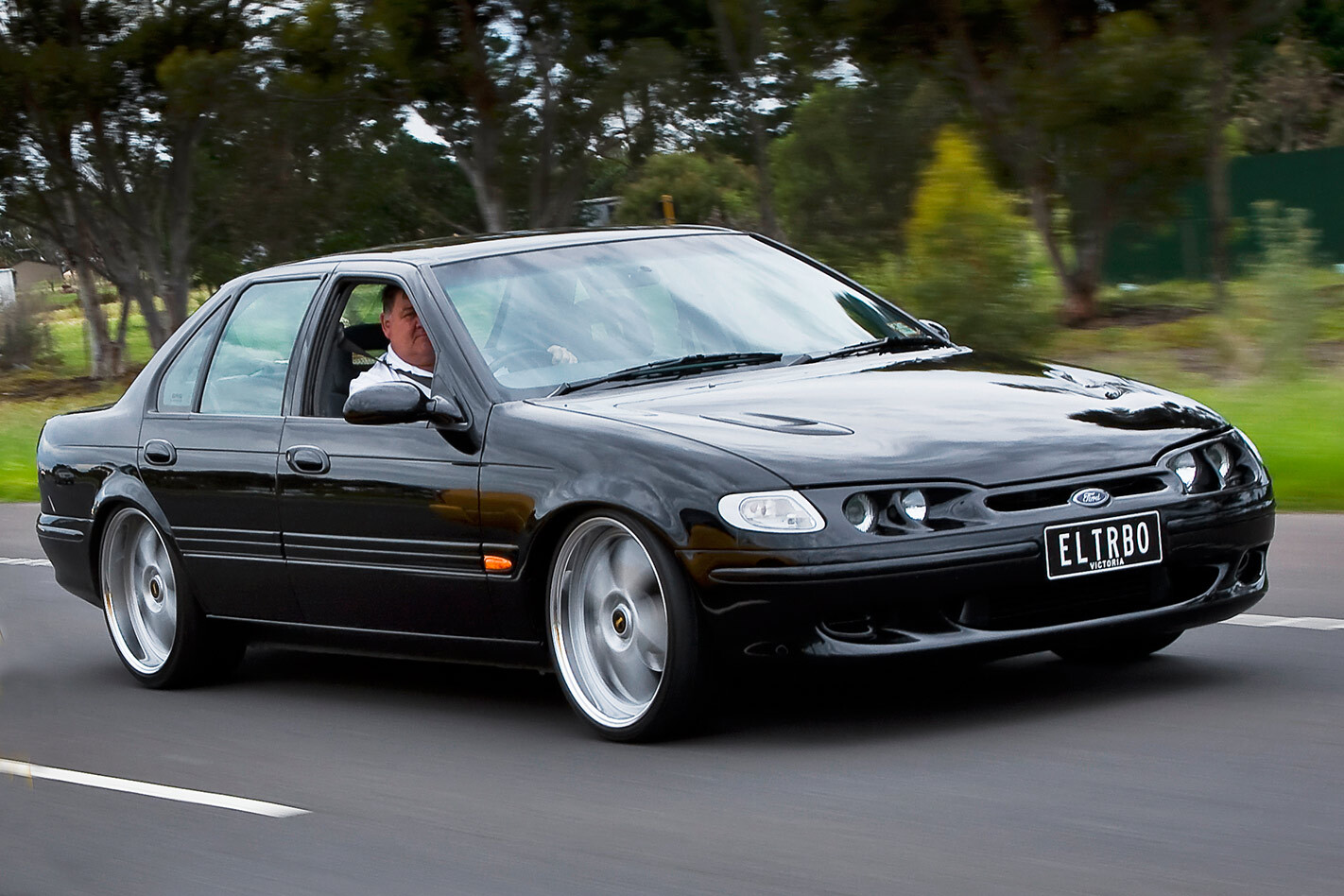 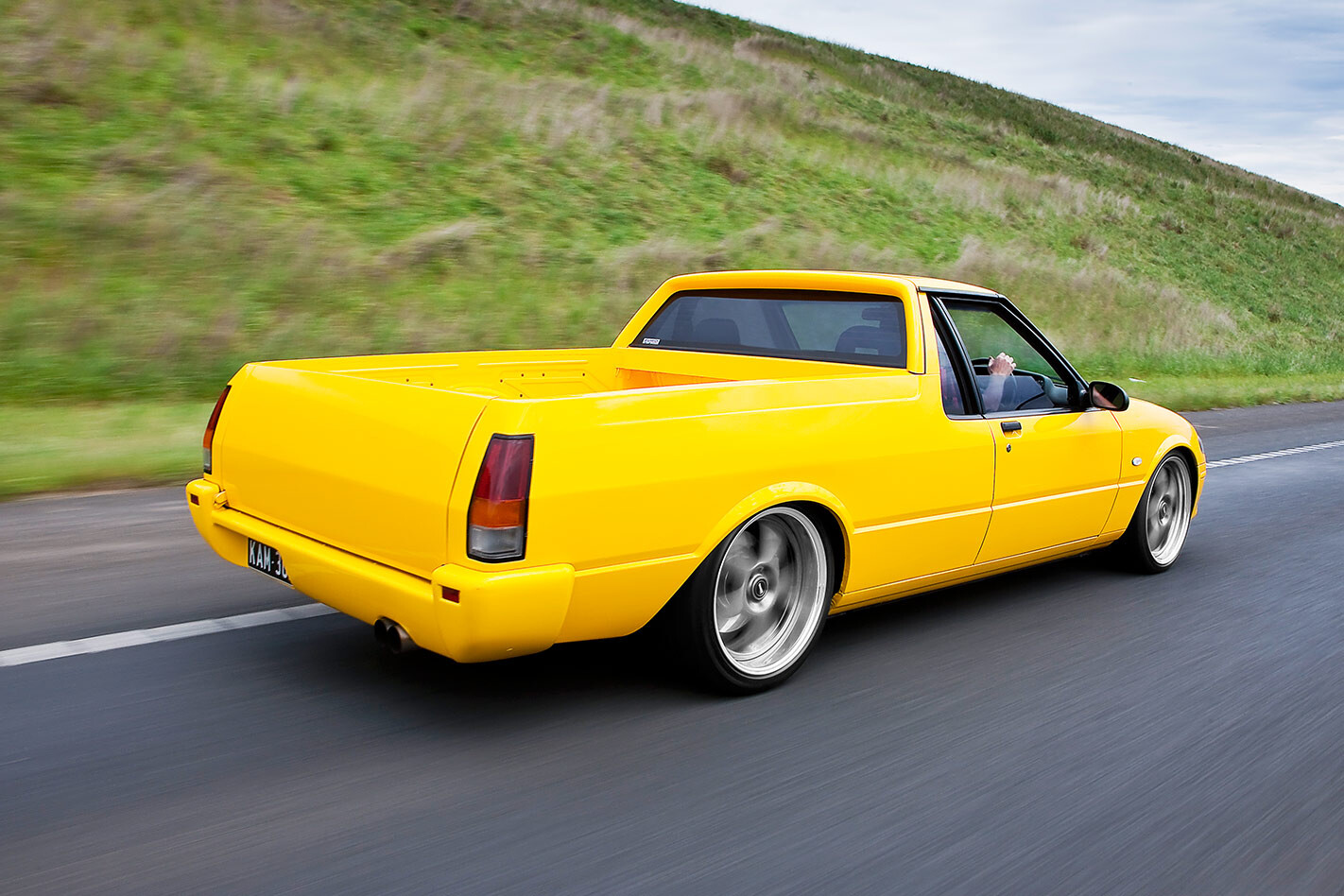