When Scott Reeves's dad innocently suggested they both overhaul his Falcon XY ute, little did he know they'd end up creating a monster

MOST parents are against the idea of their offspring spending heaps of cash on cars. Not so with Scott Reeves; it was actually his dad’s suggestion to build the brutal XY Falcon street/strip weapon you see here. 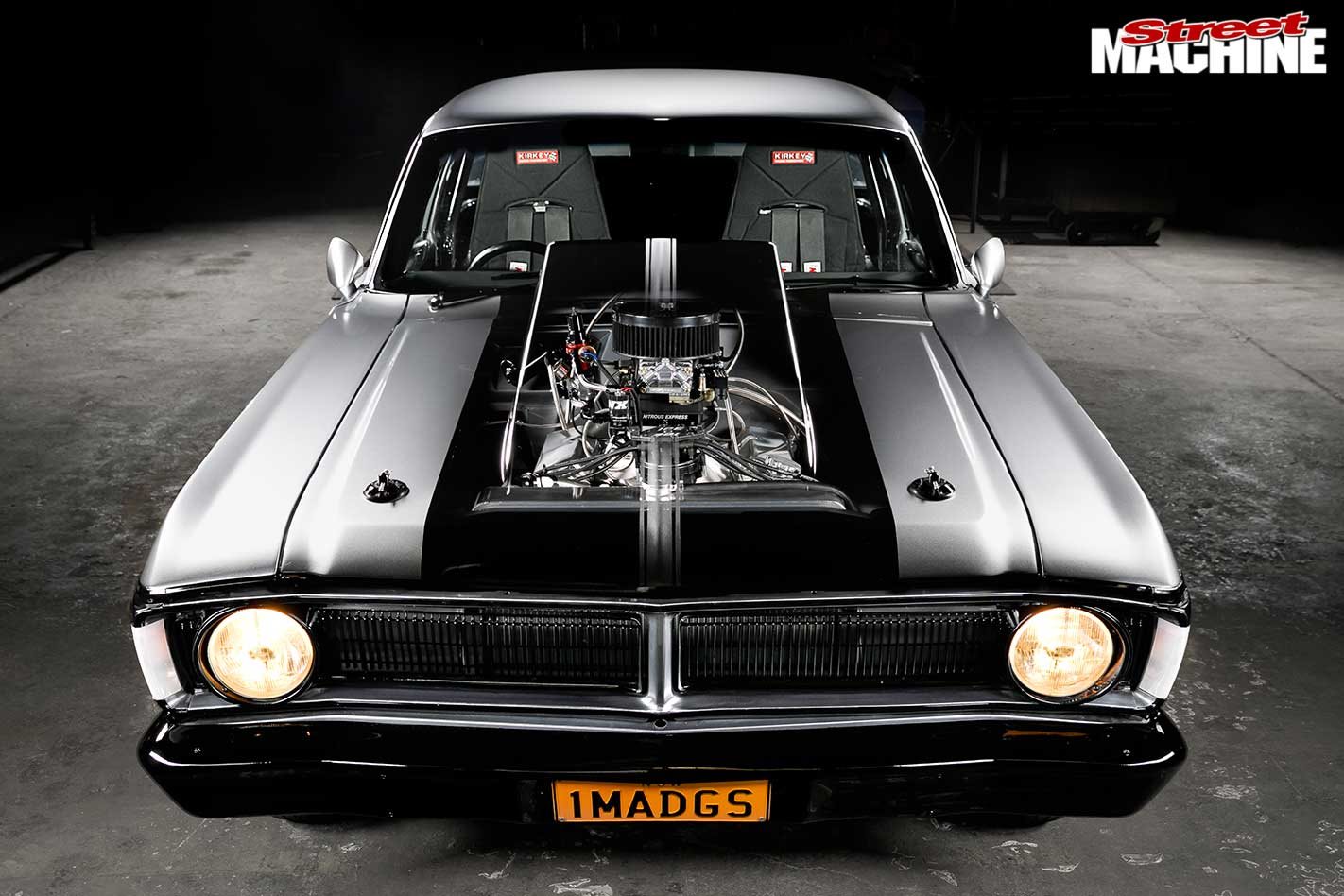 “Dad and I were wondering around Tuff Street at Summernats; I was focussing on the Capris as I wanted to get one to build into a tough street car,” Scott begins. “Dad suggested: ‘Instead of buying another car, why don’t we build up my ute instead?’”

The ute in question was Scott’s dad Robert’s neat GS lookalike, complete with 351 Clevo, C4 and 12-slots. Not one to look a gift horse in the mouth, Scott promptly took him up on his offer. 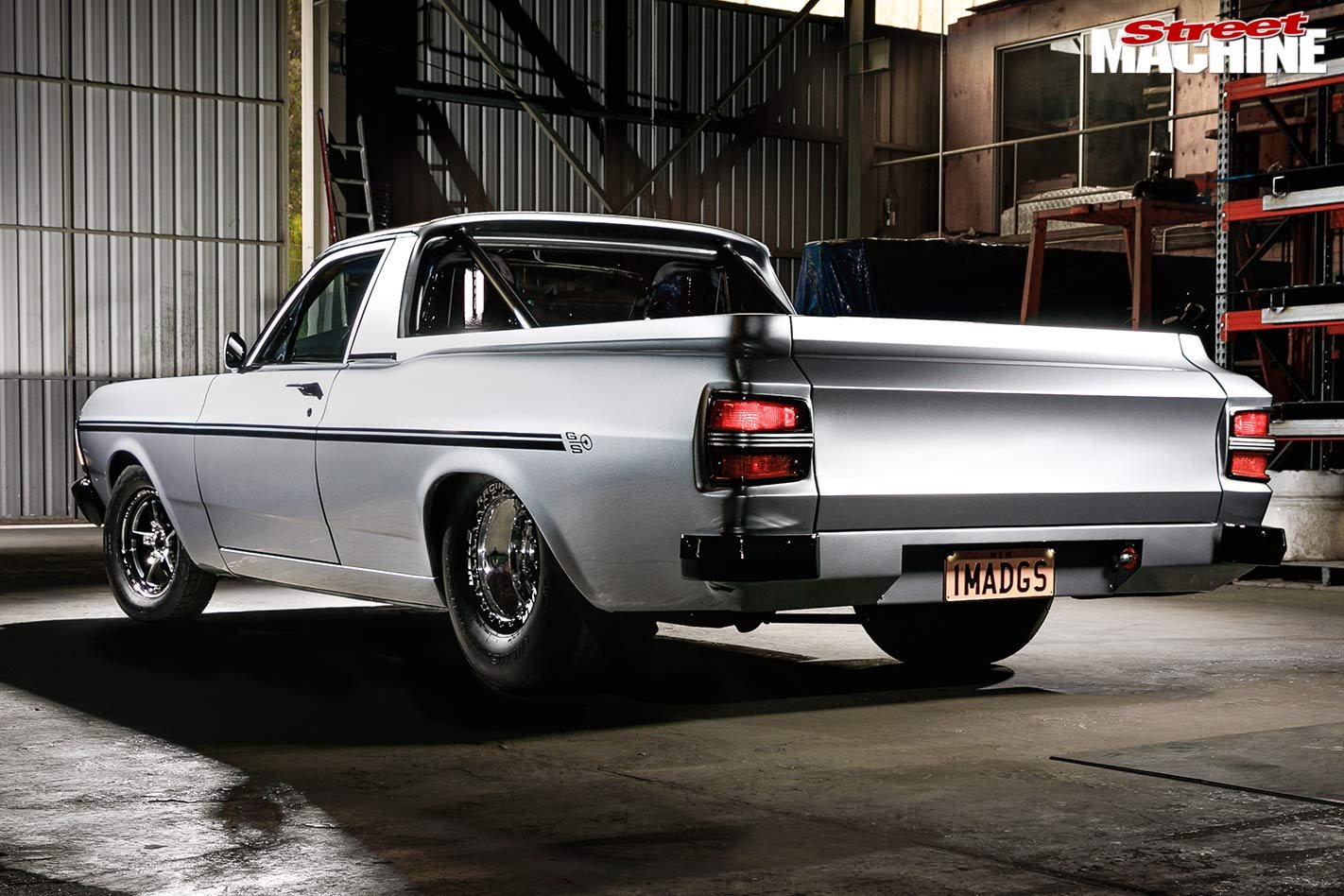 Although it was his dad’s idea to build his ute up as a father-and-son project, Scott tells us it took some convincing for him to let things go this far. “The more we achieved, the more and more he liked what we were doing,” he says. “Dad is really happy how it turned out”

Tough cars need plenty of rubber, a big engine, and loads of detailing to stand out from the pack. So, rubber first.

“I wanted to be able to drive and register the car,” Scott says. “So to give it the huge-tyre look yet stay legal, the tubs were made extra-wide and mount to the inside of the rails as opposed to the outside. They’ll accommodate a 315 tyre, and also allowed the six-point ’cage to run down through the tub and attach directly onto the chassis rail.” 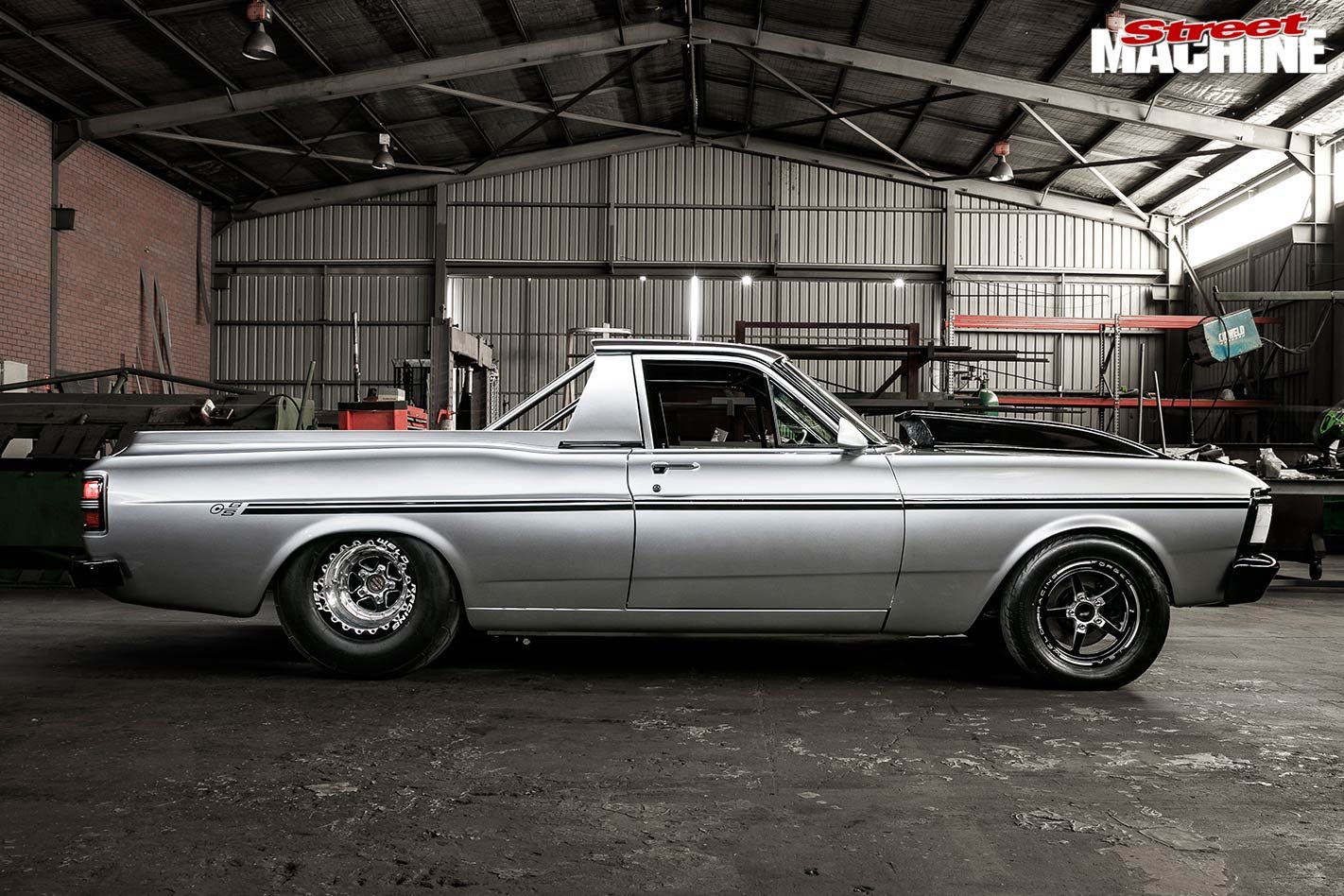 To clear the tall 295/65R15 M/T ET Streets, the wheelarches were stretched around 50mm. And to plant ’em, the rear was given the full Calvert treatment, including split-mono springs, CalTracs and Calvert adjustable shocks – all mounted inboard of the rails off a new crossmember and raised rear shackles. 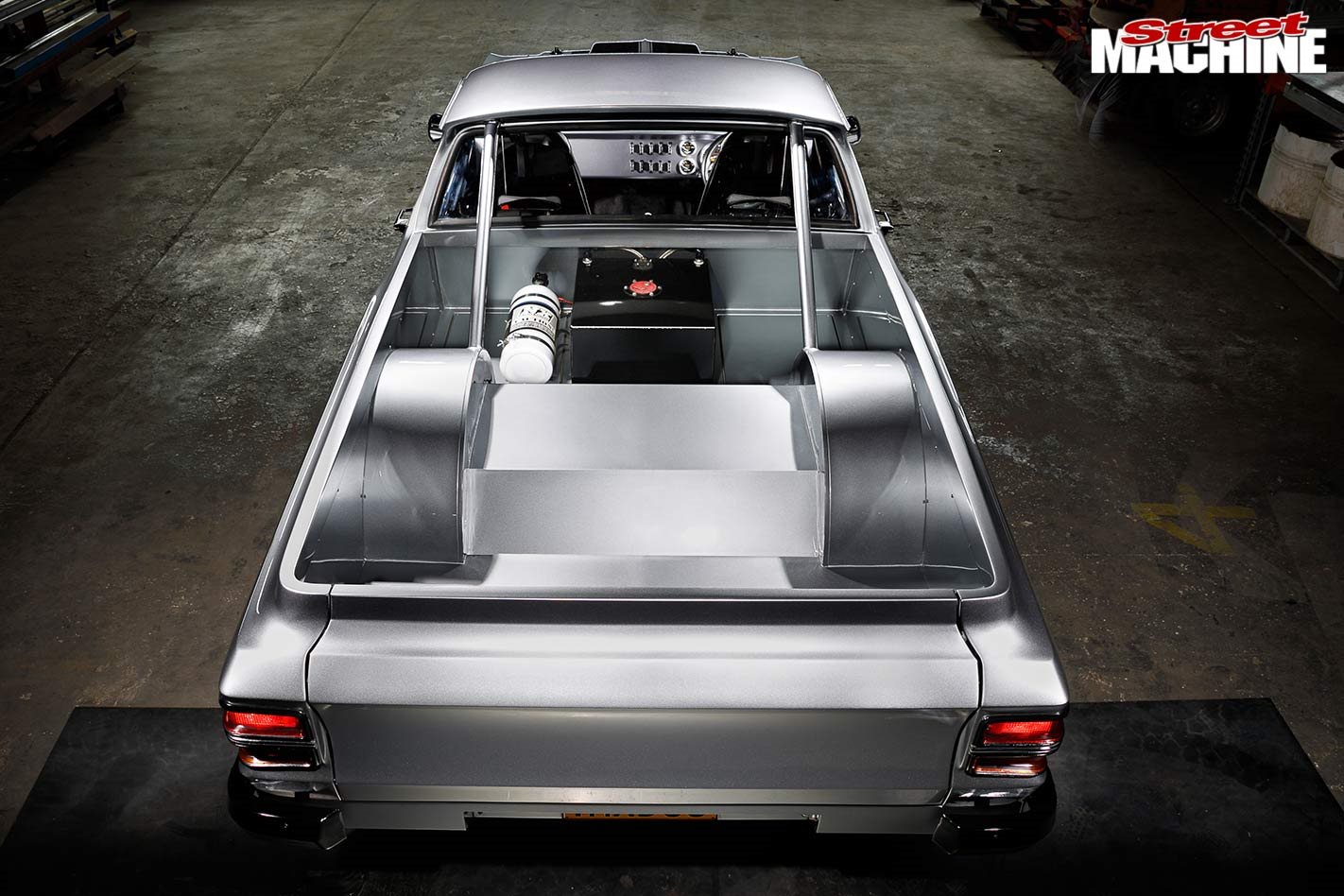 Keeping the 50L fuel cell company is the Nitrous Express bottle. The plate system was a late addition, and, although good for 500hp, it’s likely only a 200-shot will be used, as the engine wasn’t built for a big hit of giggle gas

Up front, RRS H.O.2 struts have been fitted, along with RRS’s Phase 2 big-brake kit – which work nicely with the Wilwood calipers and rotors out back. 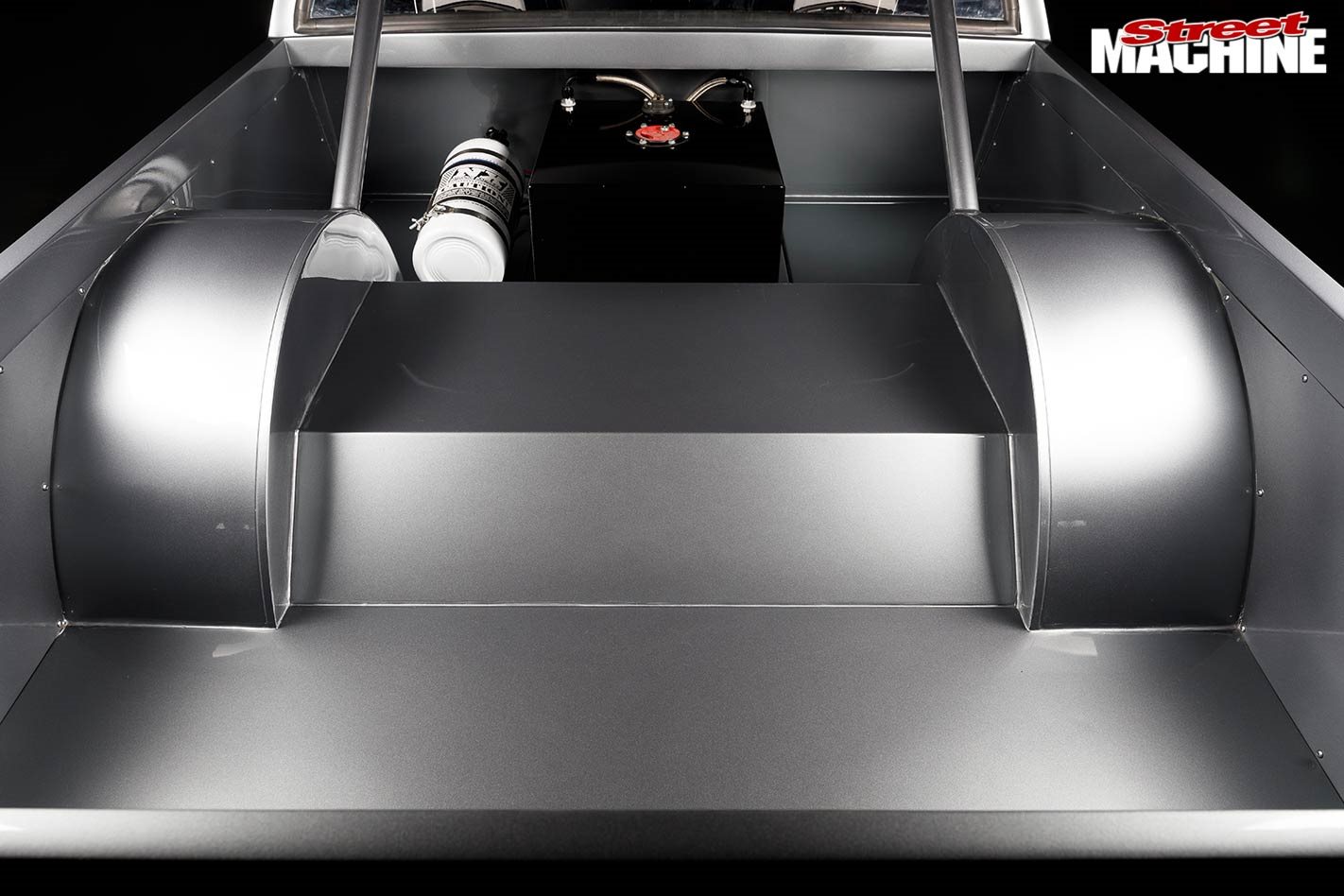 “When I was looking at engines, Trick & Mansweto Racing were winning Horsepower Heroes,” says Scott. “They were also running a special on their 750hp package – deal!”

The T&M Racing mill is based around the shorter 9.2-deck World block, into which they squeezed a 4.100 Scat steel crank and 4.185 CP pistons to create a very un-small-block capacity of 451 cubes! Add to this T&M’s CNC-ported CHI 3V heads, CHI single-plane manifold, imposing 1050 Pro Systems Dominator carby and mountainous 0.750in-lift Camtech flat-tappet cam, and it’s no wonder that when Tricky from Affordable Racing Parts recently dropped it on the dyno, it spun the needle all the way ’round to 750hp on 98 PULP – and 770hp and 639lb-ft on 109 race fuel! 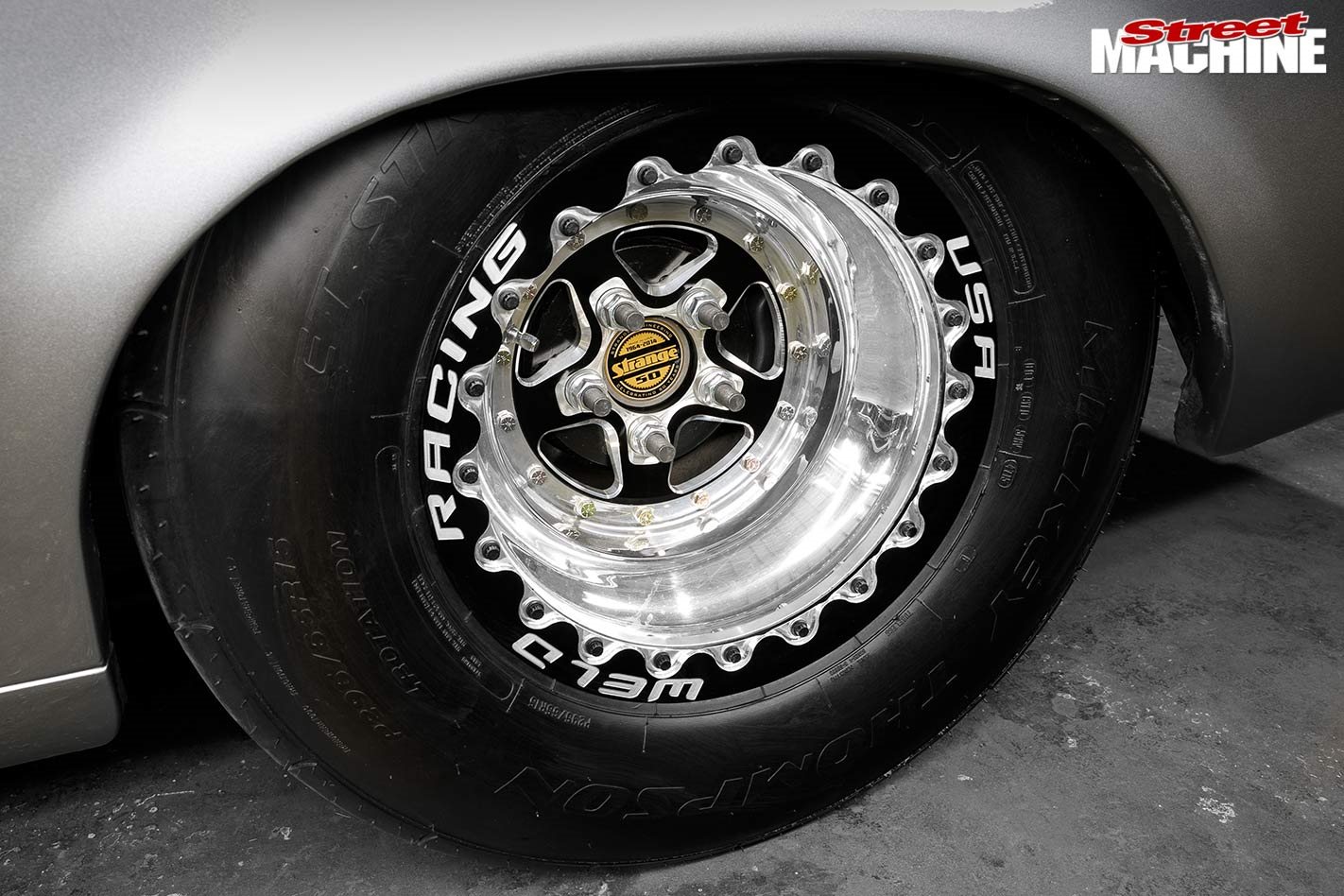 Delivering all that grunt is a brutally strong Protrans C4 with a reverse-pattern manual valvebody. From there, a beefy 3.5-inch chrome-moly tailshaft and 1350 unis lead to a Competition Engineering sheet-metal housing outfitted with a Strange Ultra Case nine-inch, 35-spline spool, 4.11 gears and tough-as Strange axles. 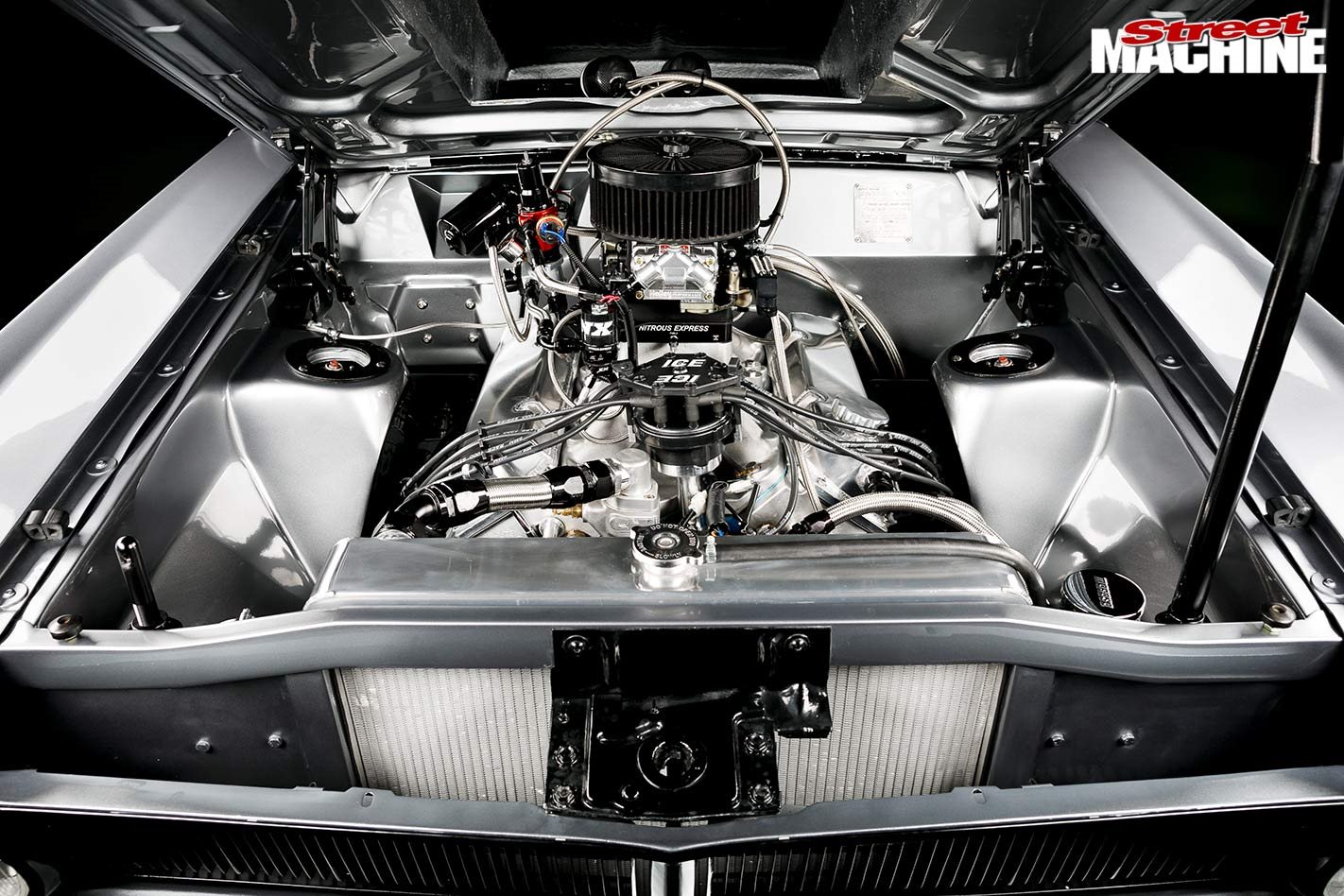 “I really wanted the engine bay to be a highlight, different to every other XY,” Scott says. “I started cutting out the firewall and inner guards. From there it’s the same old story – things snowballed and before I knew it the car was sawn into a hundred bits. At one stage, from the top of the firewall all the way to the tailgate there was very little left.”

Starting in the engine bay, Scott added a smooth firewall and plenum, plus a slick scratch-made radiator support. He also incorporated tower notches and an SS Stealth underdash brake booster set-up, all from RRS. 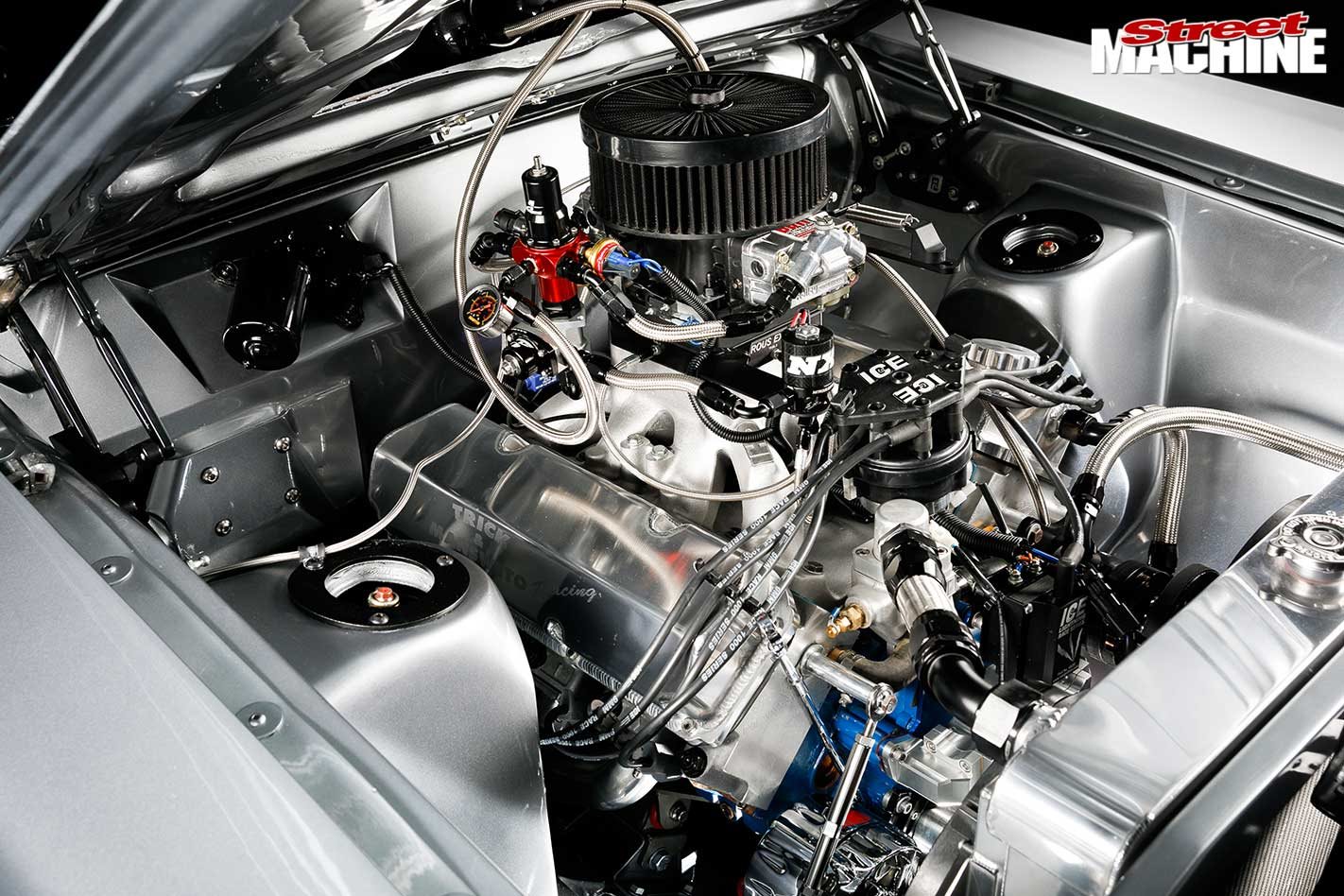 The Trick & Mansweto 451-cube small-block is good for 770 horses. “It’s another thing that got out of control,” Scott says. “We were more chasing that tough street look – we weren’t expecting the power we ended up with”

Scott and fabrication maestro Colin didn’t stop there. They added a mid-mount engine plate, before moving into the rear to give the tray area the full smooth treatment. Along the way they also deleted the fuel filler and factory seam across the top of the back window. 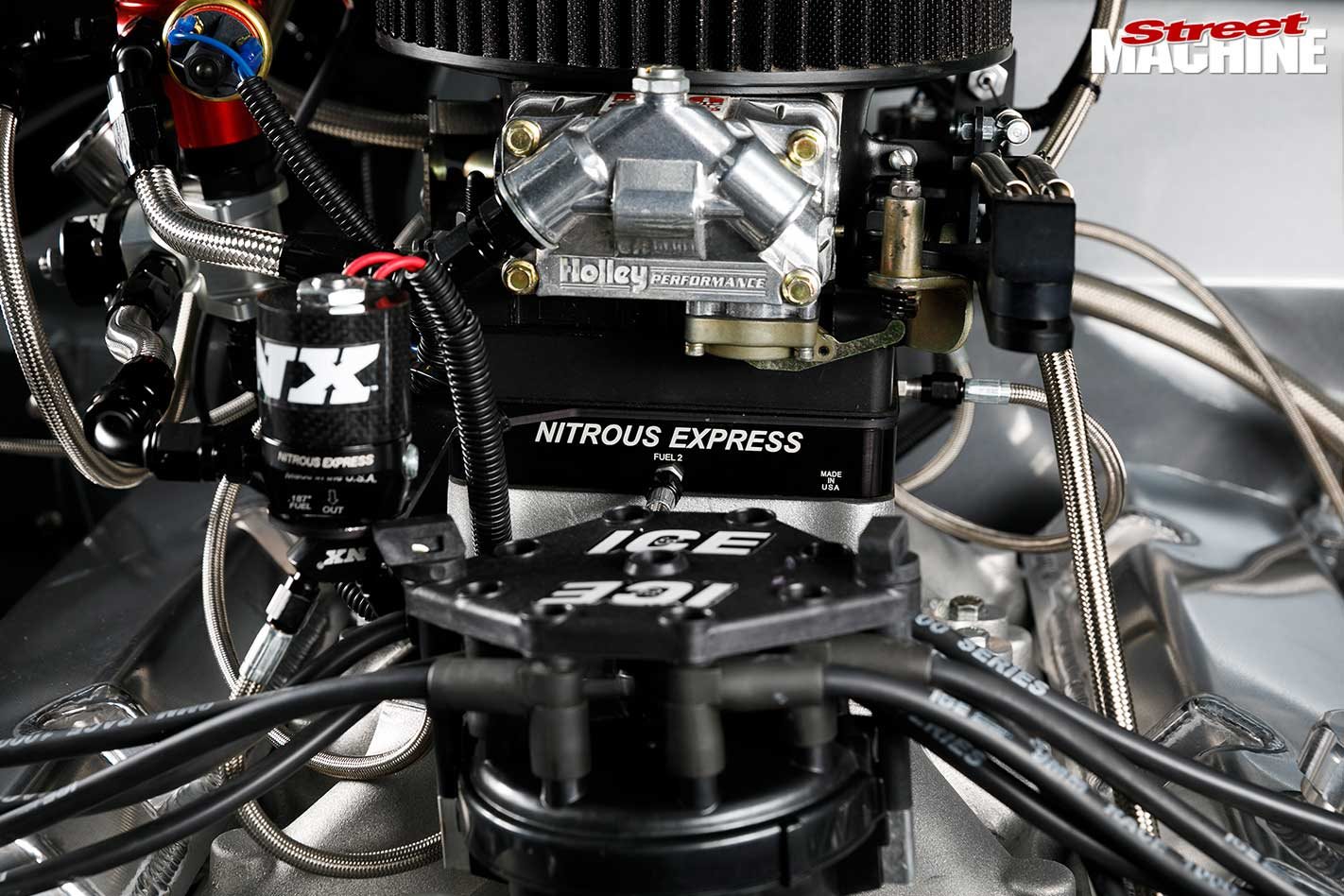 “It’s usually covered with pinch-weld,” Scott says. “We spent a lot of time eliminating it and smoothing it over. It is very subtle; most people don’t notice until you point it out.”

During all this cutting and welding, if Scott or Colin didn’t like how it looked, they’d simply cut it out and do it again. “This had a lot to do with why the build took 10 years,” Scott says, “but I think we nailed it in the end.” 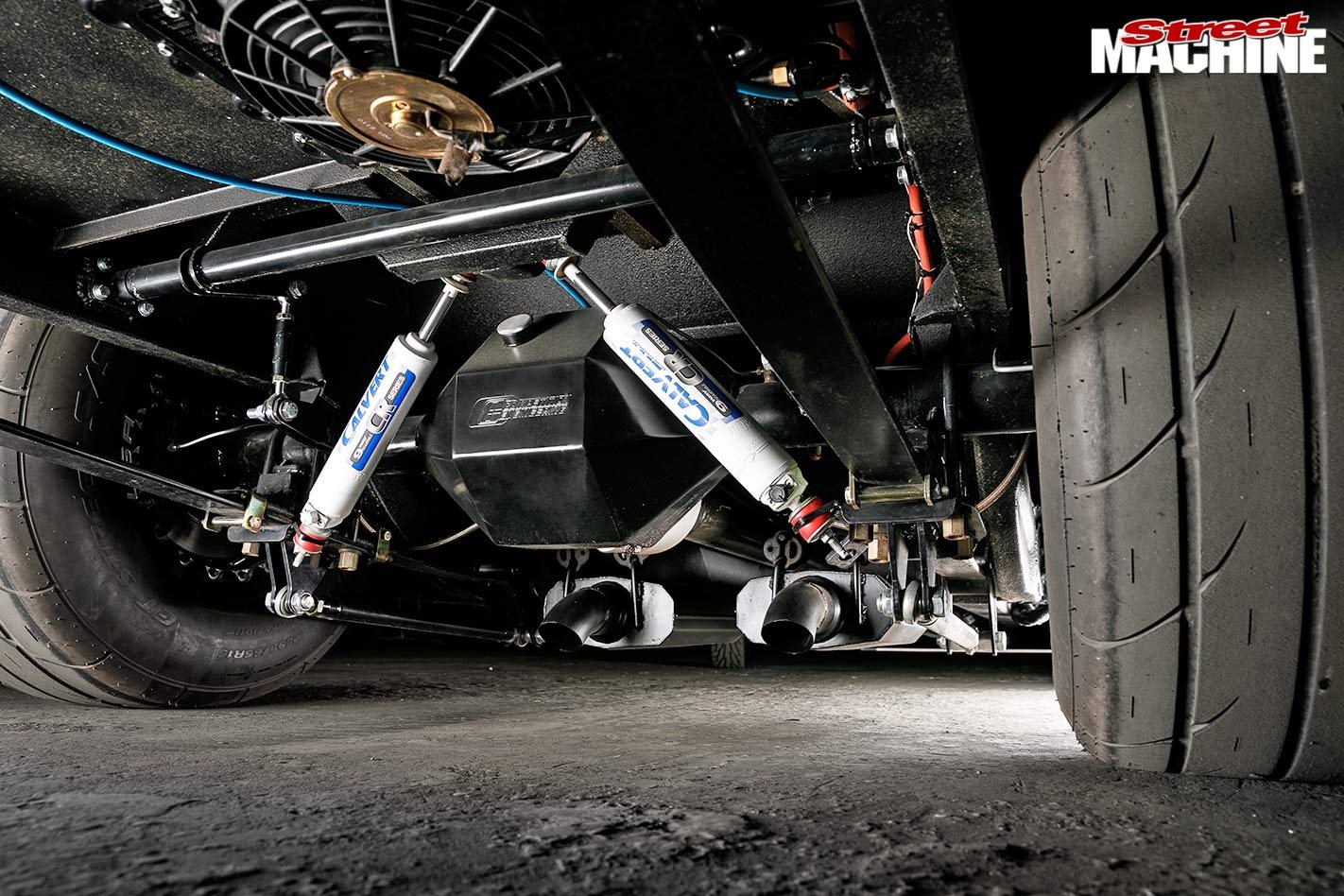 With the leaf springs moved inboard of the rails and by retaining the factory angle, the adjustable Calvert shocks ended up somewhat closer than factory. Also note the CalTracs, split-mono leaves and massive sway-bar – all in the name of a little air under the front tyres off the line

Inside is a raised tunnel along with an ANDRA-spec six-point rollcage. It’s somewhat hard to see, as the front down-bars are sunken into the A-pillars, and it’s tucked in ultra-tight everywhere else – plus it’s painted black!

With the ’cage, integrated chassis connectors, mid-mount engine plate and new crossmember out back, the ute is now incredibly stiff. “At one stage we were jacking up one corner and it lifted off three jack stands!” Scott marvels. 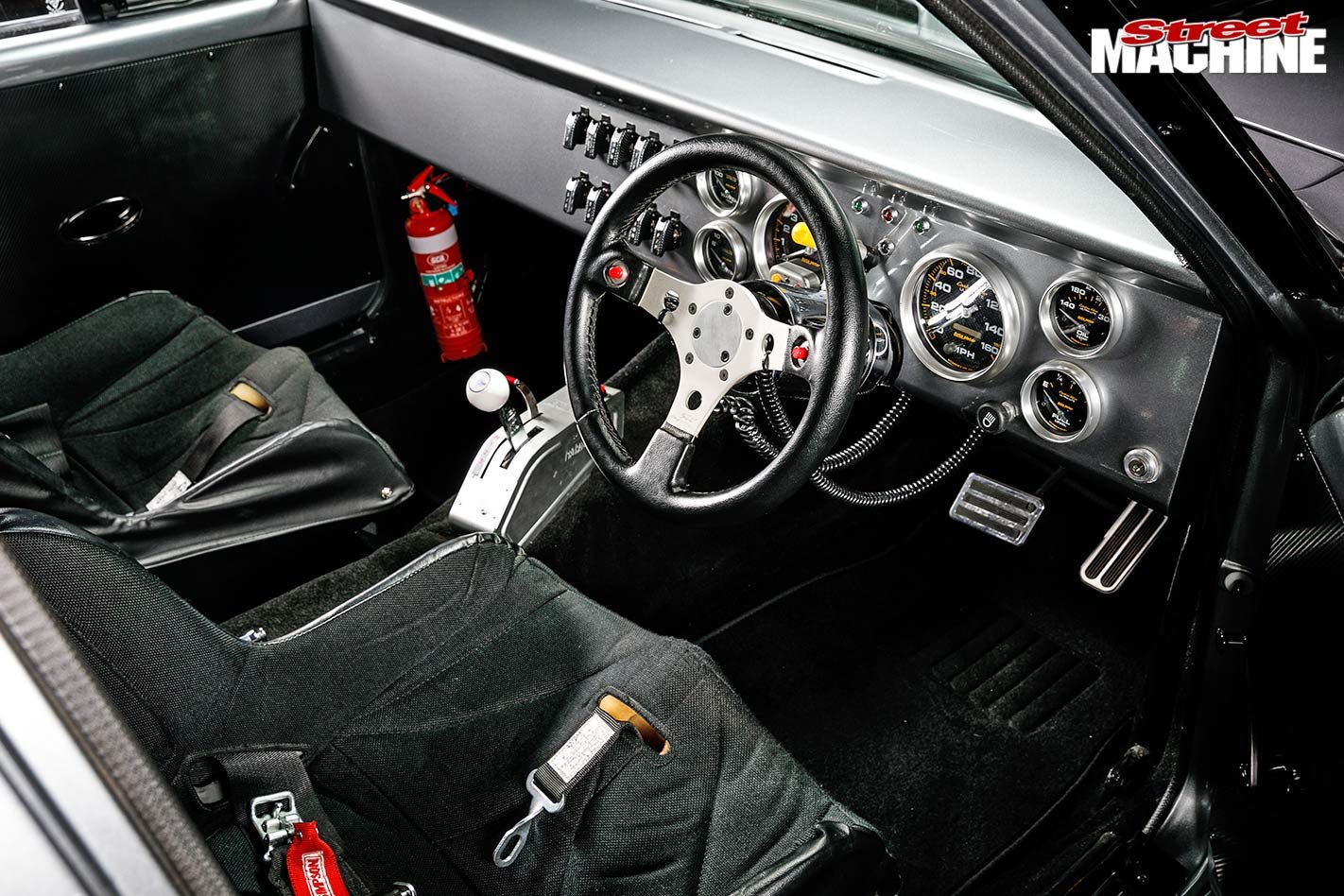 The last piece of the puzzle was body and paint. Nathan McInnes handled all the bodywork, which included fettling the Alfa Fiberglass composite panels: front guards, bonnet, filled scuttle panel and bumpers. After that, Spot On Paint at Fyshwick laid on the eye-catching Mercury Silver – a factory BA Falcon colour – and contrasting black highlights.

Scott’s wife Naomi and 13-year old daughter Ellie were a big help throughout the build. 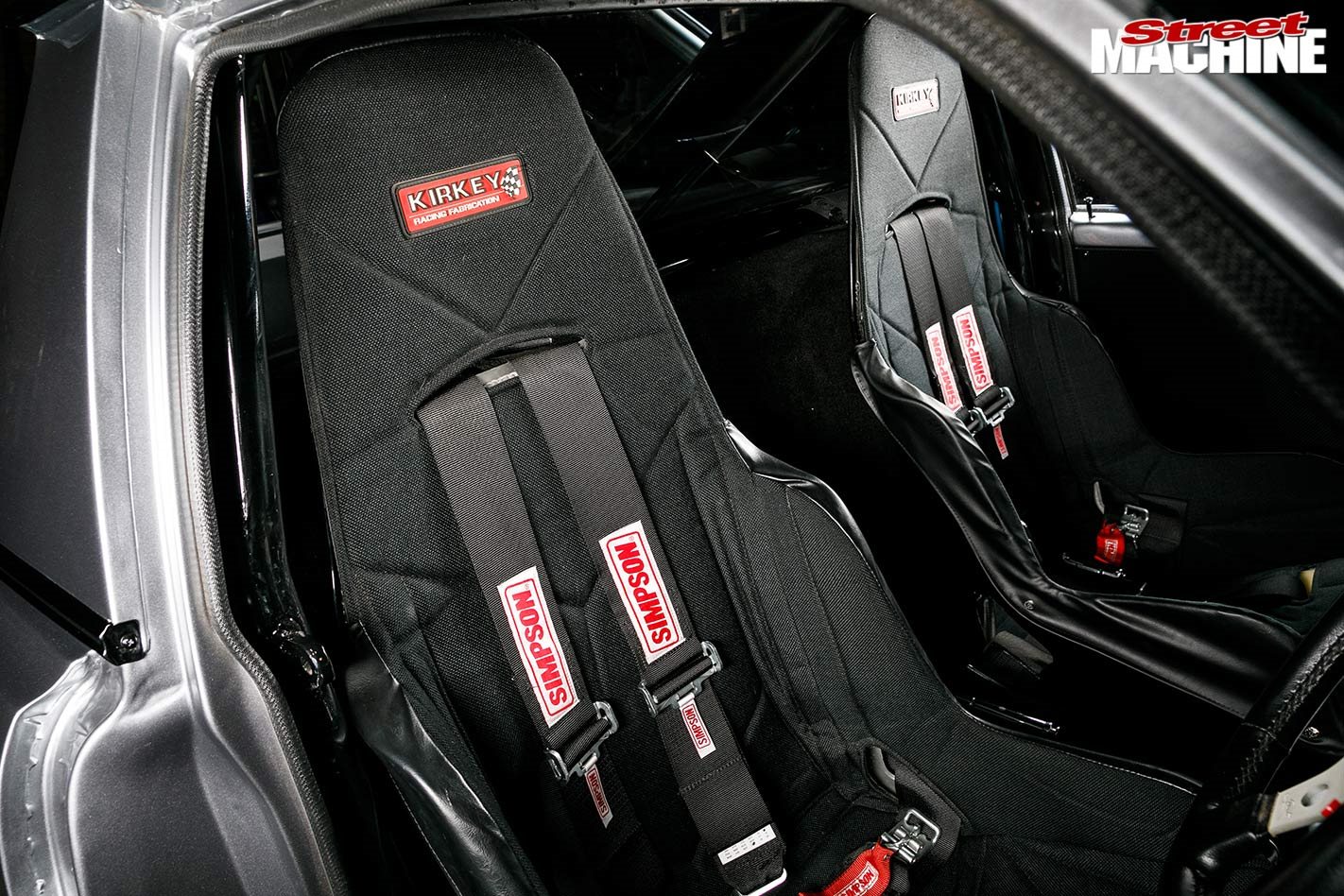 “Ellie even helped me put on the GS stripes,” Scott says.

After all their hard work, it’s fair to say that 1MADGS’s debut at Summernats 31 blew Scott and his dad away.

“I was amazed at the attention it got,” says Scott. “We just wanted to get into Tuff Street; I was shocked to pick up Pro Tuff Engineering Excellence. Then we made the Supercruise and PPG Supreme on Sunday. Surprised and stoked is the only way to describe it.” 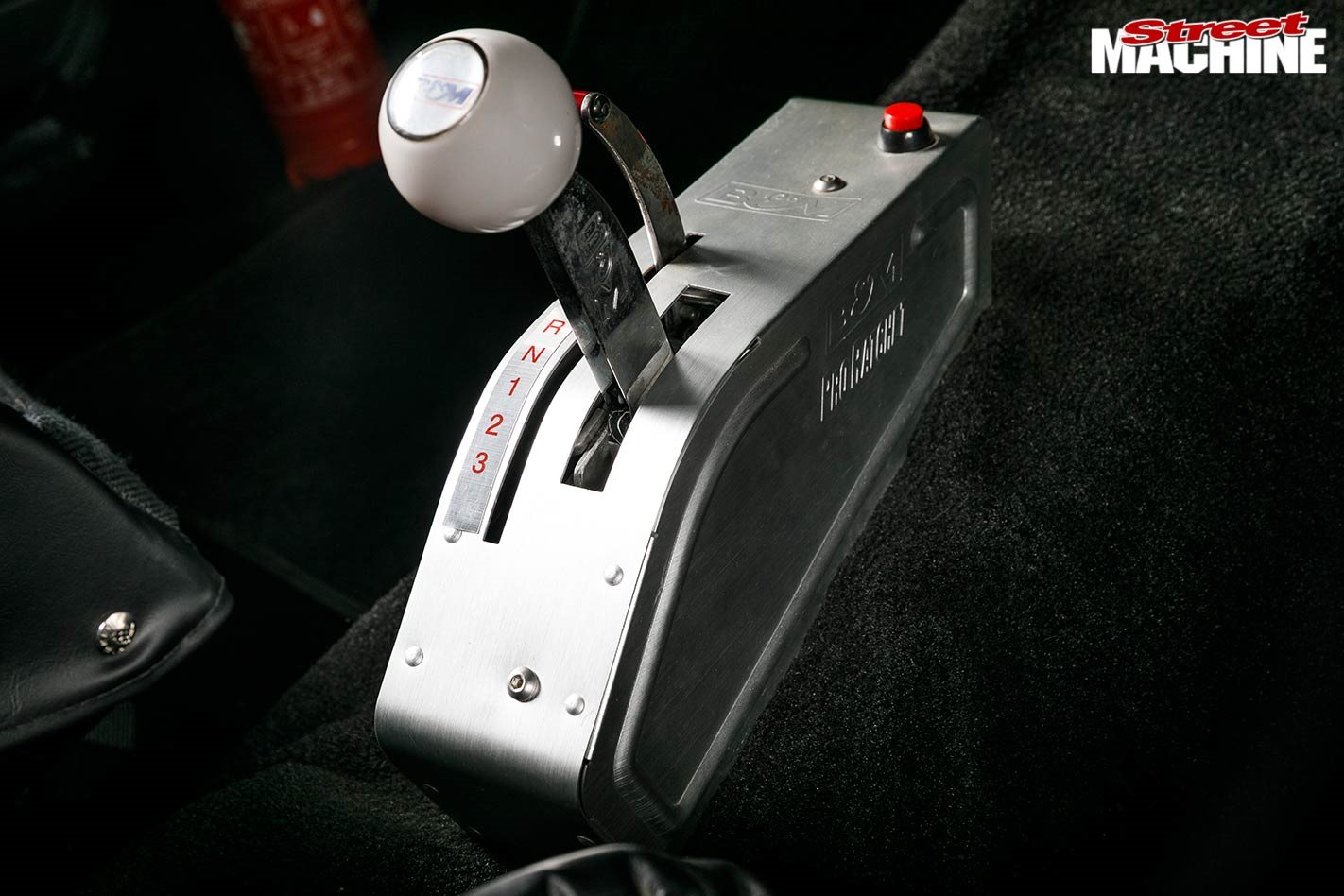 After the Summernats success, the plan was to race the ute, but that’s still to come.

“After Street Machine invited us to do the shoot, we decide to leave it in the shed to keep it nice,” Scott says. “We’ve got a few little things to fix up to pass tech inspection; then it’s off to the track. Also Dad hasn’t driven it yet; we’re going to take him out to a quiet back street for a bit of a spin before letting him loose at the track. He’s really looking forward to it.” 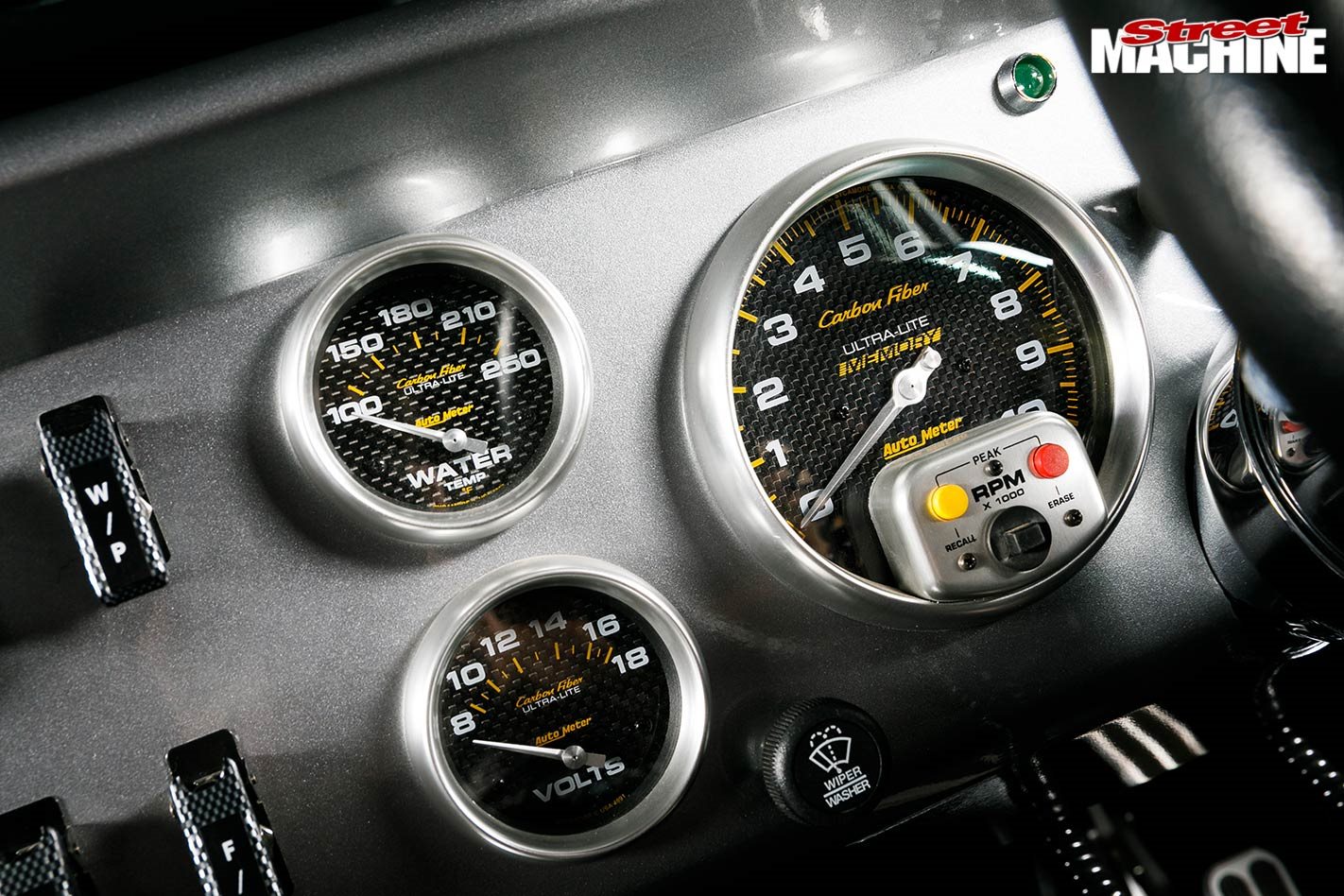 The brace of Auto Meter gauges have been strategically arranged across the fabricated dash so that they can be read at a glance. The ANDRA-spec rollcage is hard to see, as it’s tucked in tight and hidden away as much as a ’cage can be. To satisfy the rego boys, the side bars are removable

Getting 1MADGS ready to take the tree is a relatively painless operation. The tailgate is easily removed by retracting the slide bolts in the bottom corners and unclipping the stay bars.

“It’s a great set-up,” Scott reckons. “All the mounting points stay put, so taking it on and off doesn’t affect its alignment.” 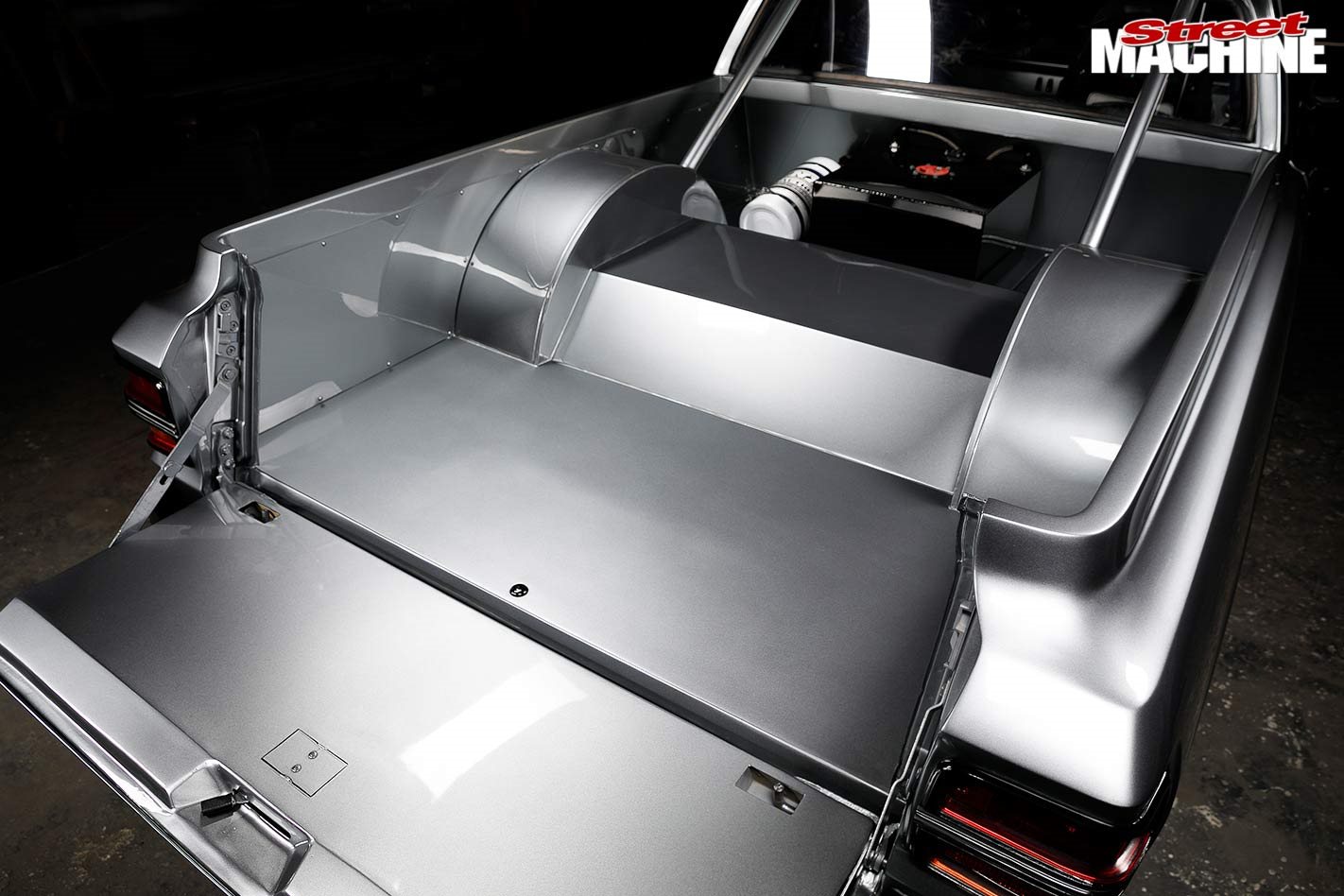 From there, it’s four screws to remove the factory spare tyre cover that hides the mount for the parachute strap, which in turn is tied into the strengthened chassis. The basket that holds the ’chute simply slips into the black bunghole in the tray.