OVER the years hundreds of street machiners have set targets for themselves, on and off the track, only to fall short for one reason or another. Ask why and most will say it’s because they didn’t surround themselves with the best people. This is a mistake that Queensland racer, Johnny Wilson, has not made with his 622ci, nitrous-equipped LH Torana.

Each issue (in Urban Warfare) we highlight the merits of the racers in Street Machine’s ongoing Fastest Street Car Competition. The most exciting class for a long time has been Modified Street Blown, for the simple reason that the cars are real street cars and they must have over 1300hp to be anywhere near competitive. 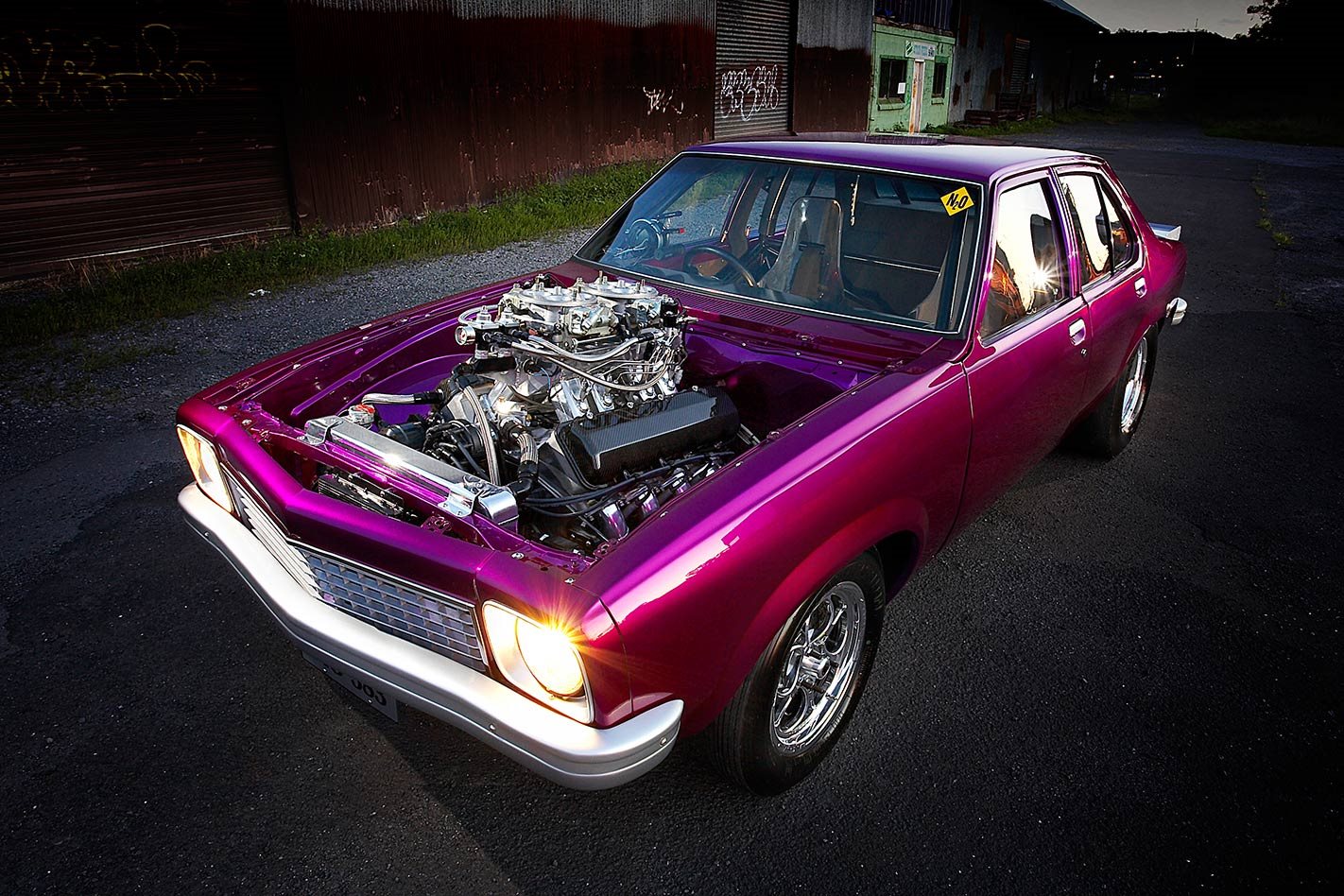 “I’m ecstatic,” laughs John, who cut his teeth racing a genuine Bathurst HK GTS Monaro in Modified Street (SM, Jan 2006). “In the first three meetings with the car we have made all three finals, won two of them and reset the national record from 7.98 to 7.88.”

While Johnny has to be admired for the results, the car was screwed together by the best people in the country. The build was managed by Simon Kryger, the then record holder in MSB and a 10-year veteran of racing Toranas in this class.

“I’d been looking to buy a car for some time but didn’t really like anything I saw,” recalled Johnny. “I’ve only owned three cars in my life and I like to build every one of them to last me forever. 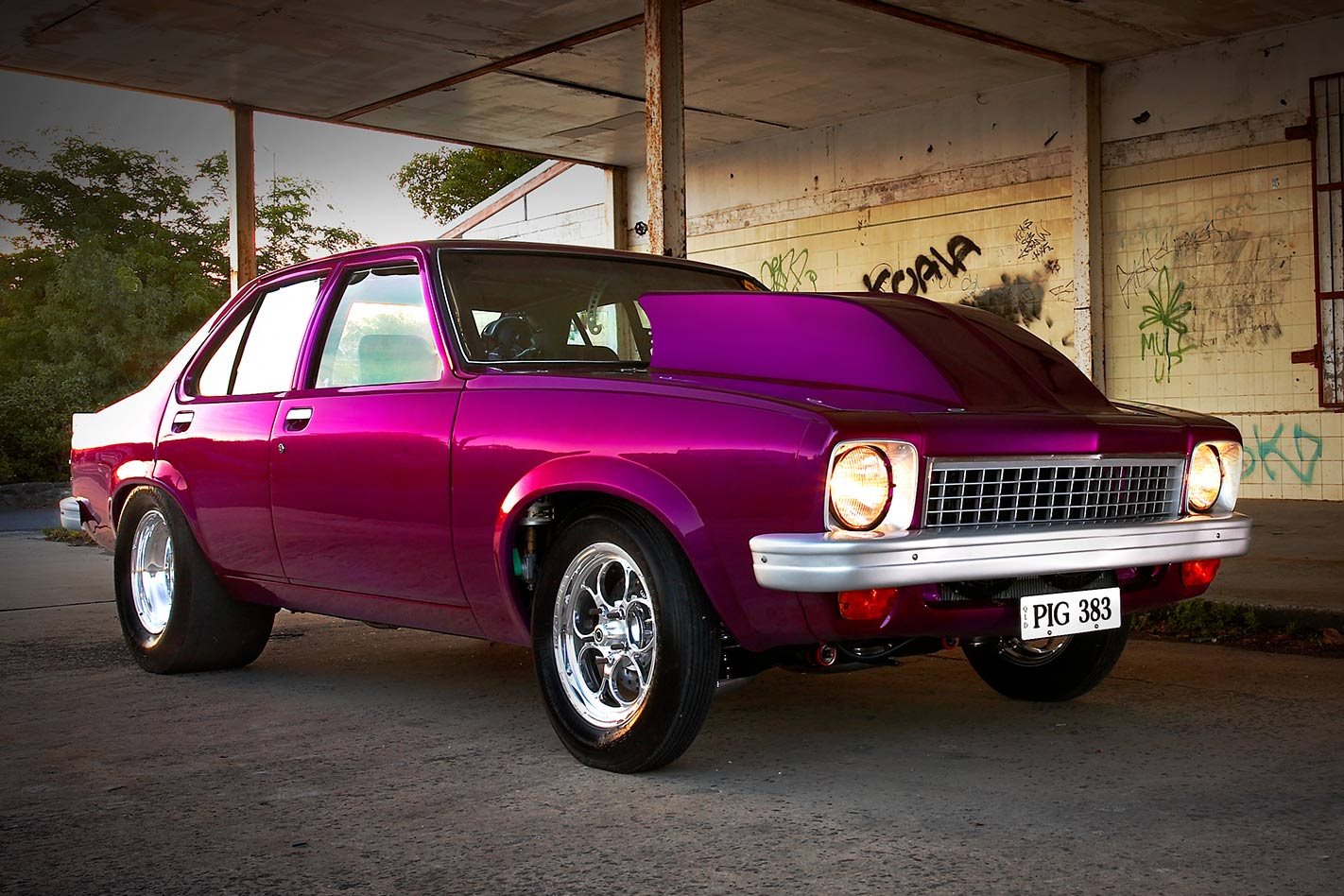 Pro Street cars are looking more and more like showpieces. Johnny’s is decked out in luscious House of Kolor Wild Violet

“At one meeting Simon gave me a hand to sort out a nitrous problem and we became mates. He offered to help me build the car using the same team of guys he used.”

A shell was sourced and stripped before being sent to Craig Burns at Streetcar Fabrications. Modified Street rules prohibit chassis work that goes beyond wheel tubs, cage and removable fibreglass bonnet and boot lid. With all that done, Craig fashioned a set of carbon-fibre bucket seats and door trims to keep down the weight, and saved some more kilos by fitting fibreglass bumpers and replacing the side window glass with polycarbonate.

To accommodate the 28 x 11.5 MT slicks, the rear wheel arches were stretched and the back doors modified for tyre clearance. 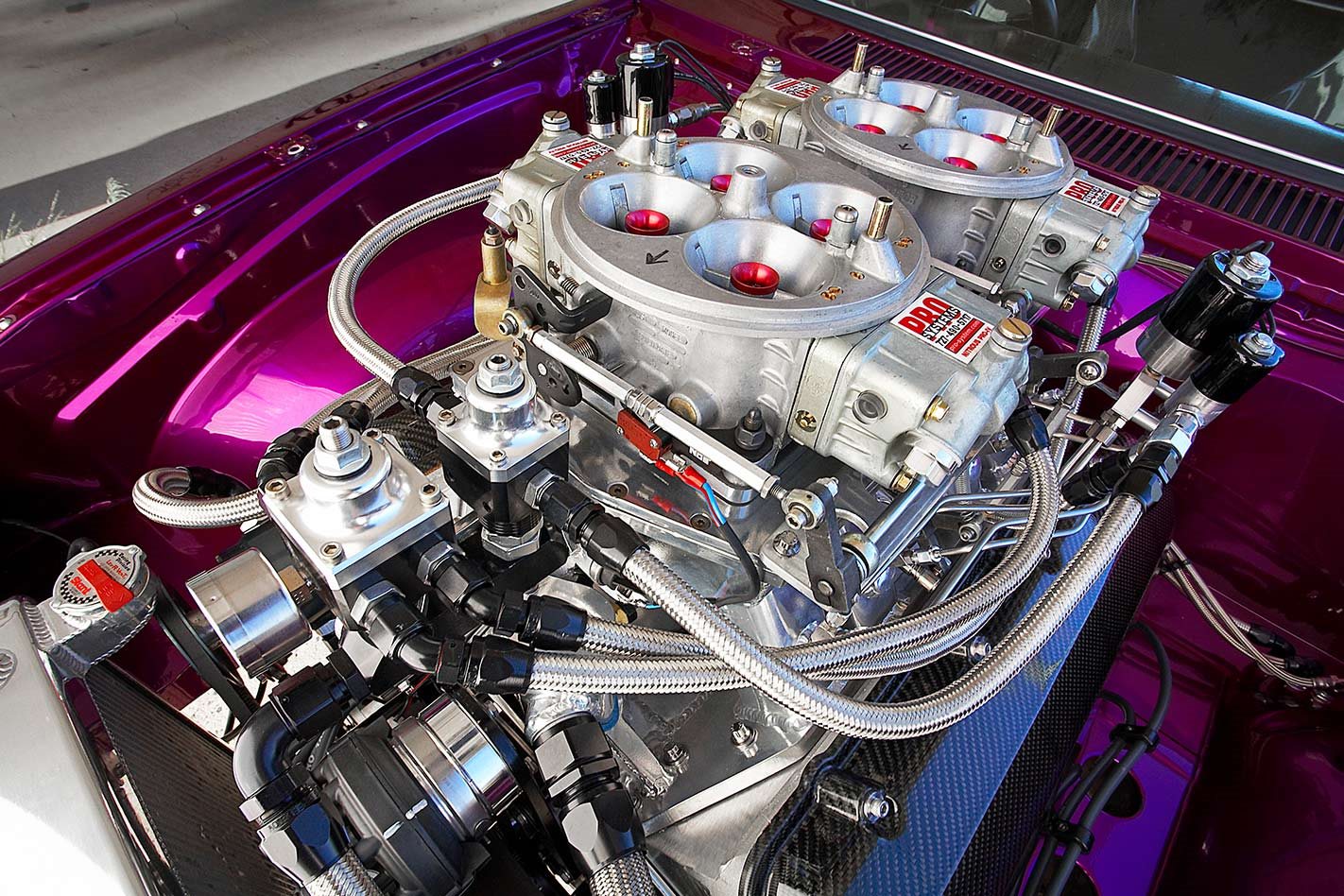 The 622ci Chev was screwed together by Norm at Northmead Autos and was built for big rpm and the rigours of serious nitrous use. That means the motor has all the best bits you can buy

It took six months to knock the body into shape and a mate of mate, known as “Little Johnny”, finished the shell off with a coat of House of Kolor Wild Violet.

The engine is a work of art on all levels. Built by Norm at Northmead Auto Centre, in Sydney’s western suburbs, the 622ci big-block Chev makes over 1112hp in aspirated trim, 880ft/lbs and a staggering 1252hp at the tyres with a 500-shot of nitrous. 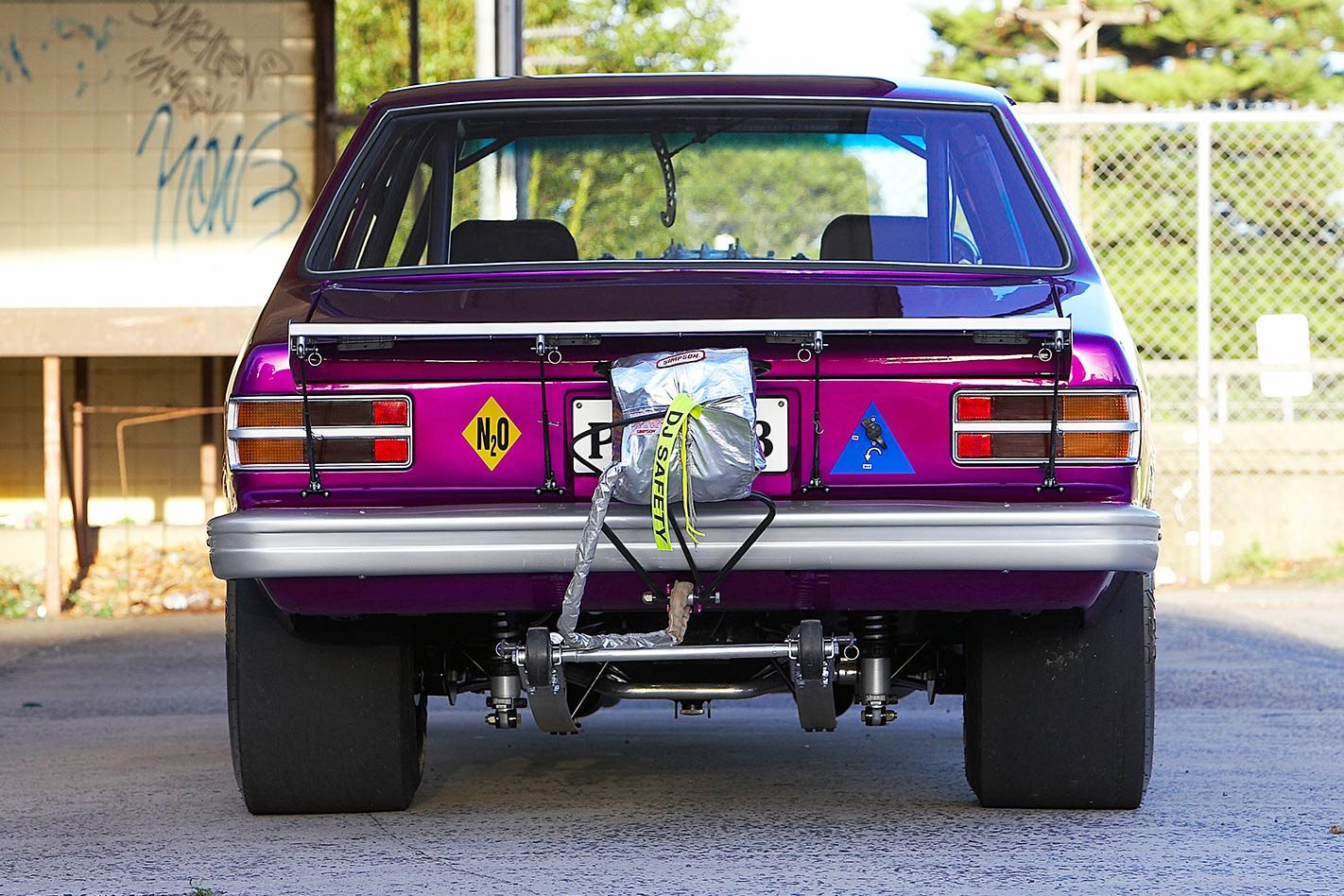 For Chevy lovers, this motor is a wet dream. The core is a Dart tall block with splayed steel caps, Lunati crank, Lunati billet rods and Ross Pro Mod pistons. The rotating assembly is good for about 2000hp, and with so many cubes, the engine needed a big set of heads. They plumped for Dart Big Chief 18 degrees units.

These have been fitted with titanium valves and on the flow bench they crank out an amazing 490cfm at 850thou of cam lift. 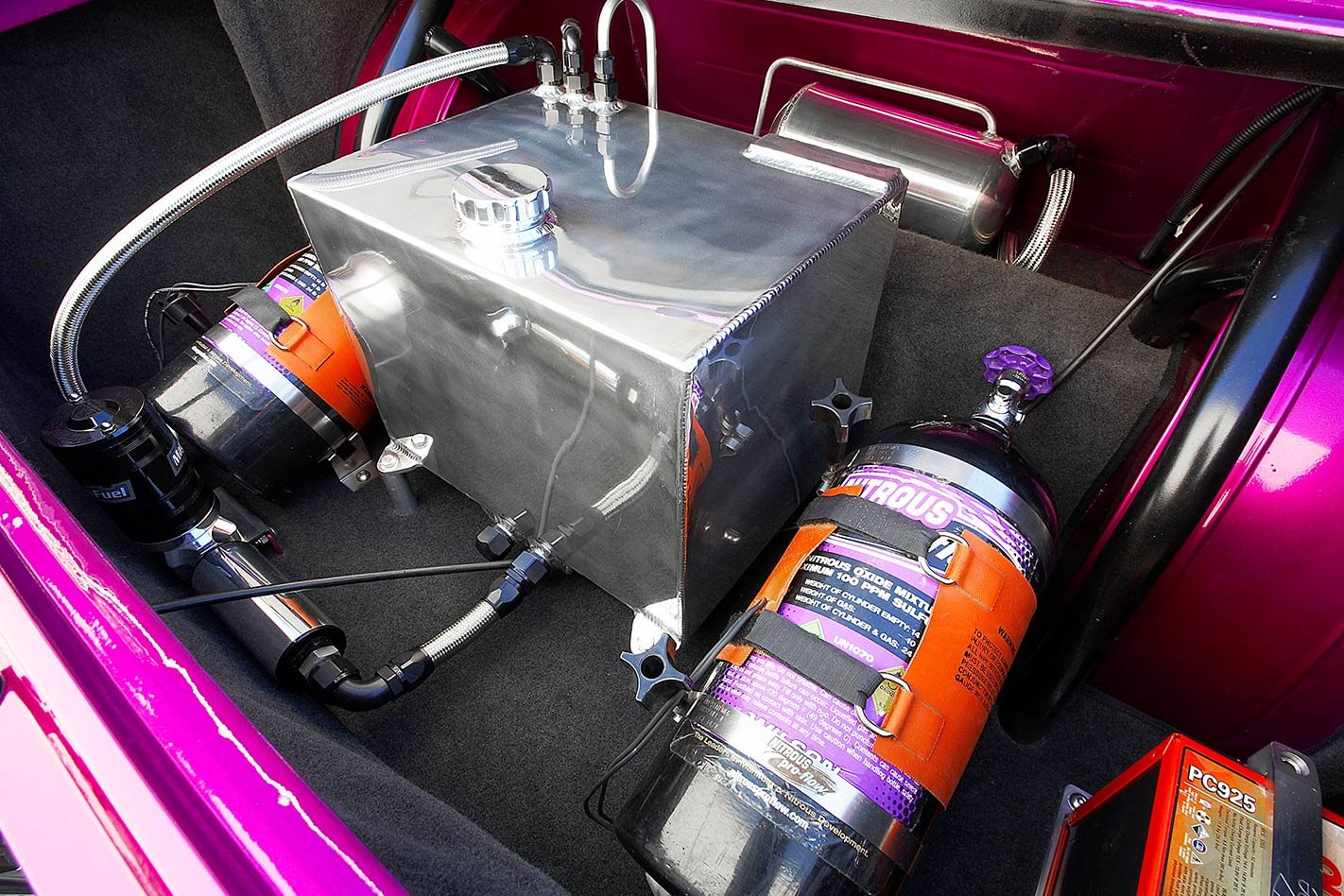 The twin-fours are fed by a Magna Fuel 5000 series pump that also feeds the Wilson nitrous system on the engine via a common fuel log and twin four-port regulators.

The engine is mounted front and rear with solid engine plates and the air/fuel mix in the 15:1 compression engine is fired by a massive 10amp ICE ignition system with a 24-volt ignition booster with programmable ignition curve.

The 23/8in pipes off the exhaust port are stepped to 2½in into four-into-one merge headers and a dual 4½in exhaust system. 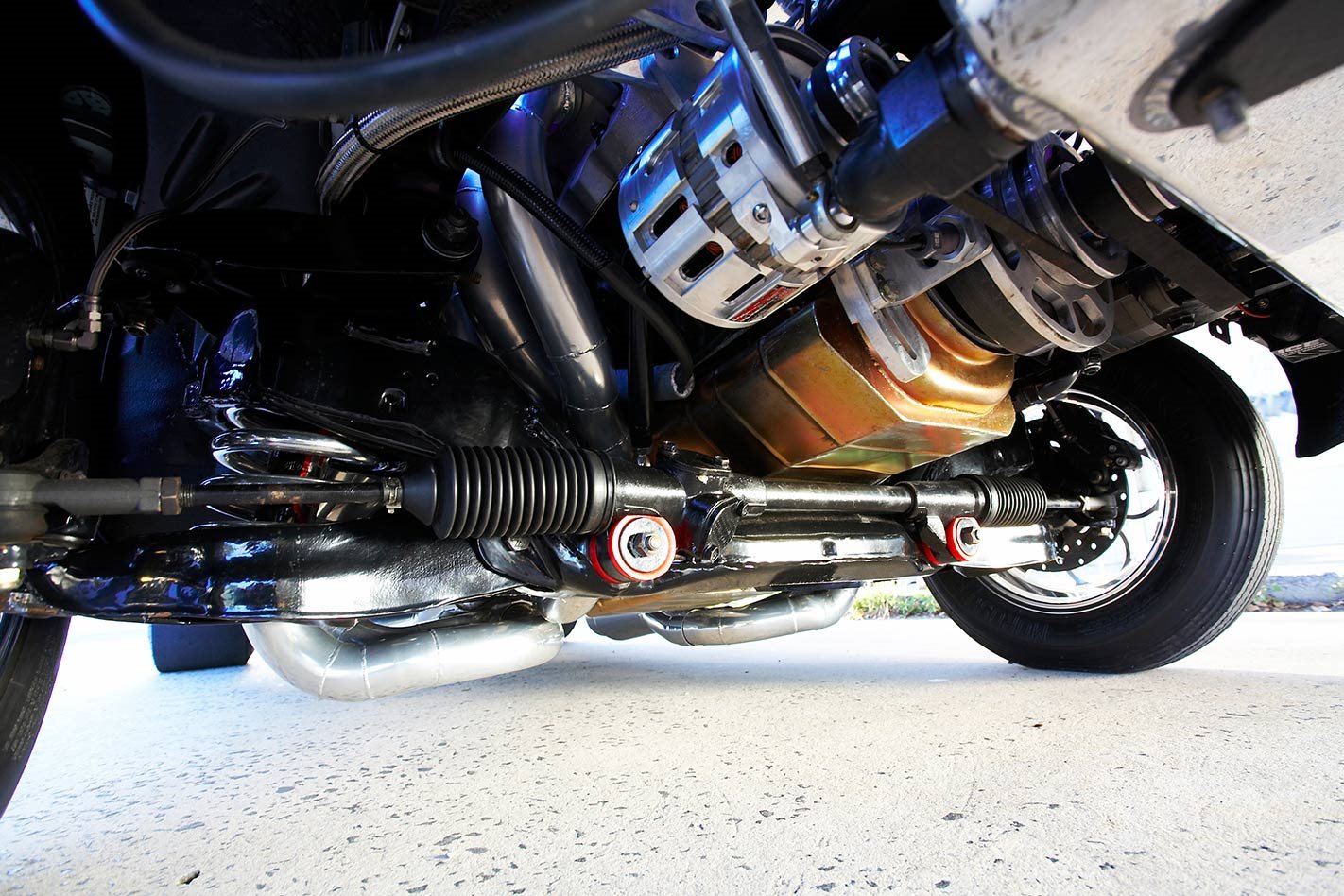 The combination of 1252rwhp and standard a Torana chassis shouldn’t make sense, but the Torana runs straight as an arrrow

A monster Powerglide by Northmead Auto, rated at 3000hp, backs up the powerhouse and is fitted with a custom 1.65:1 first gear, ringless input shaft and all the best components, including a TCE converter.

“I really built this car to run 7.50s with this combination,” states Johnny. “I’d like to run 7.50s and 185mph by the end of the year, although the car has been set up to run faster with a new twin-turbo combination that will come later.

“It’s really a case of common sense; big horsepower and a light car will always run fast … and this car drives easy. It feels like a granny’s car you can get groceries in.” 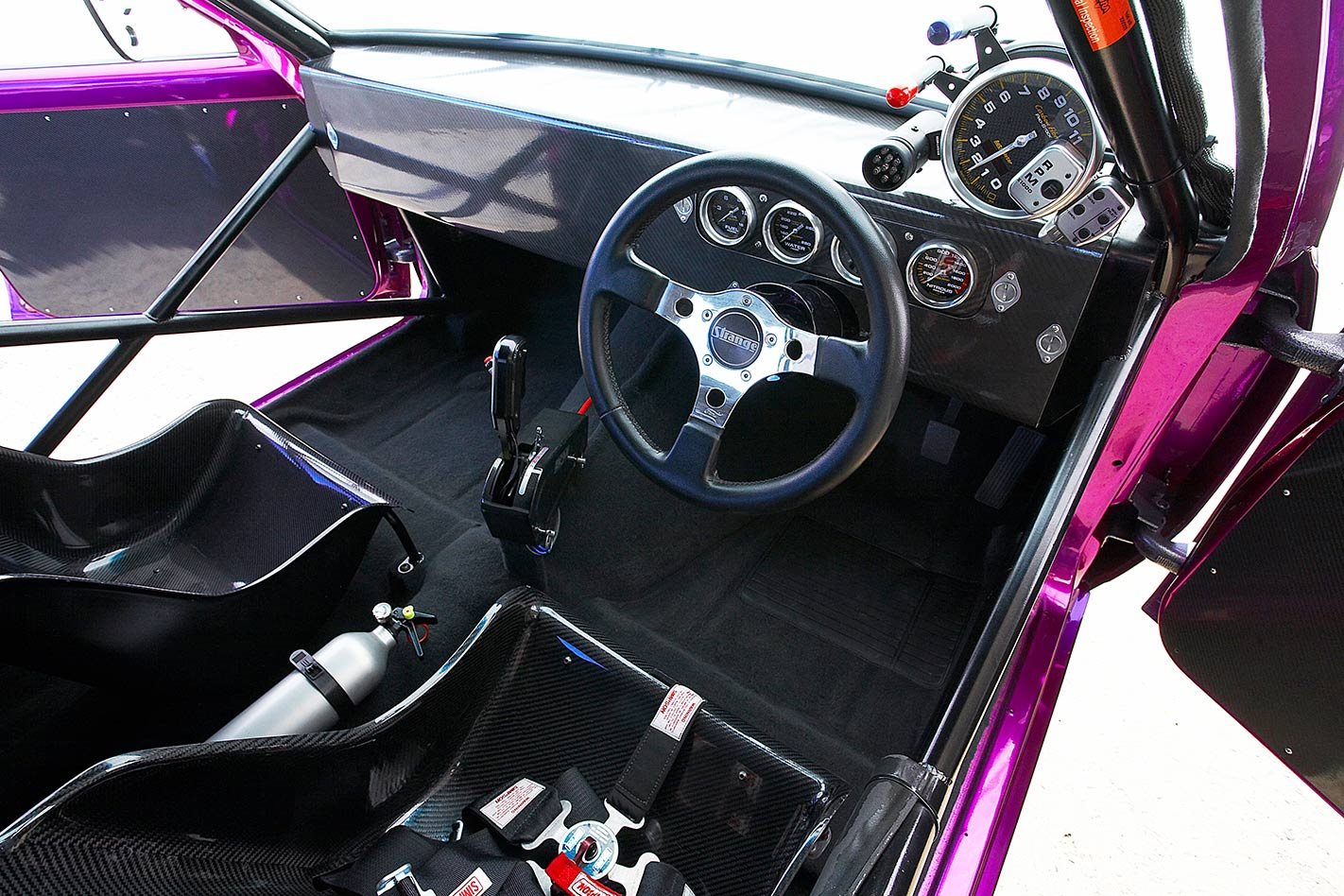