From old-school classics to modern-day muscle, variety was the spice of life at Winton Raceway for Performance Car Mania 11

Tough cars, tyre smoke, and fun times with friends is what Performance Car Mania is all about, and this year’s event was no exception.

Although the three-day event, held last weekend at Winton Raceway, was cut short by rain on the Sunday, it was party time as usual until the heavens opened up, with a massive crowd coming out on Saturday to watch the cruising, powerskids, burnouts and drag racing. 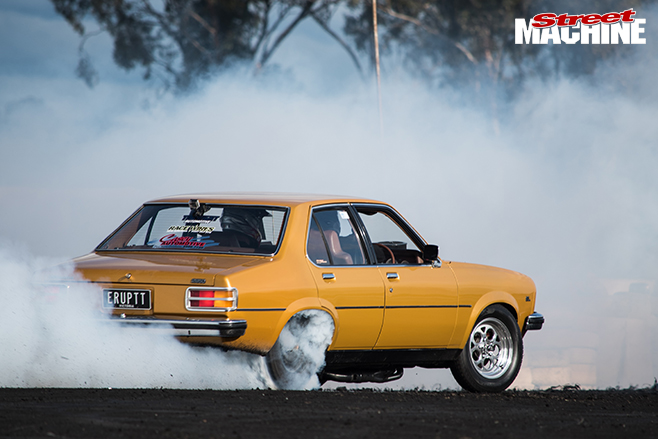 This year saw several changes to the running of the event. New minimum vehicle standards were implemented to improve the quality and variety of cars out on the track, and entrant numbers were capped to reduce congestion in the cruise sessions. This freed up track space and gave room for organisers to set up three powerskid areas around the track instead of just one – a very popular change! 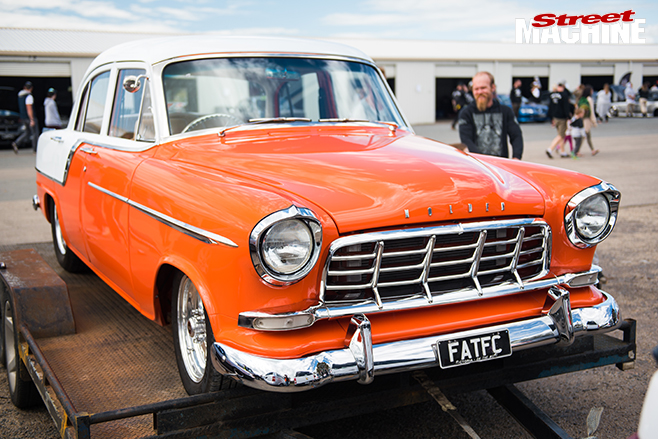 Unfortunately Sunday’s driving event finals were washed out, and track officials were forced to cancel proceedings early. For the powerskid and burnout comps, organisers decided to award the trophies and prize money based on the qualifying scores from the previous day, while the prize money for the drag racing will jackpot for next year’s event. 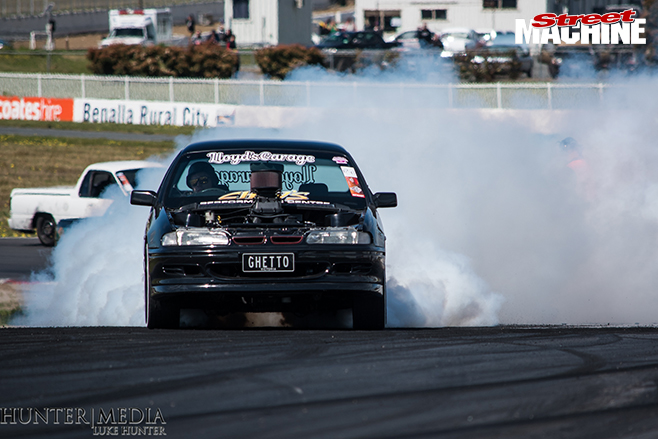 Shane D’Amato in the GHETTO VS ute took out the burnout comp, with the JOYRD-3 VK Calais of Aiden Leist coming in second, while David Pendlebury was third in his blown and injected HiLux, PROPSI. David also did well in the powerskids, coming in second place behind Matt Smoors in the FSTGMH blown LS3-powered VK Commodore (SM LSX TUNER #1). Tim Parker was third in his VX SS. 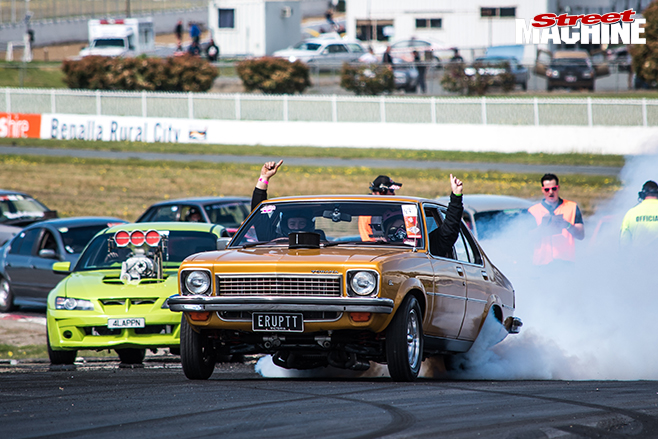 Trent Baseden’s ultra-neat gold LX sedan runs a 6.0L L98 with mildly ported LS3 heads. The engine bay has been smoothed and the motor is so neatly detailed it looks like it was factory-fitted. Backing the 6.0L is a full-manual Turbo 350 and nine-inch. 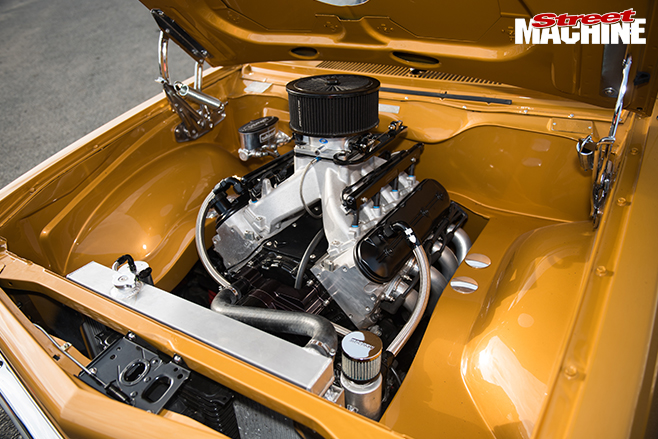 “When I first got it, it was an all-original six-cylinder, three-owner car with books,” Trent said. “It was almost too good to cut up, but I wanted a good shell as a base and this one was spot-on.” The car ran a best of 10.40sec down the quarter-mile. 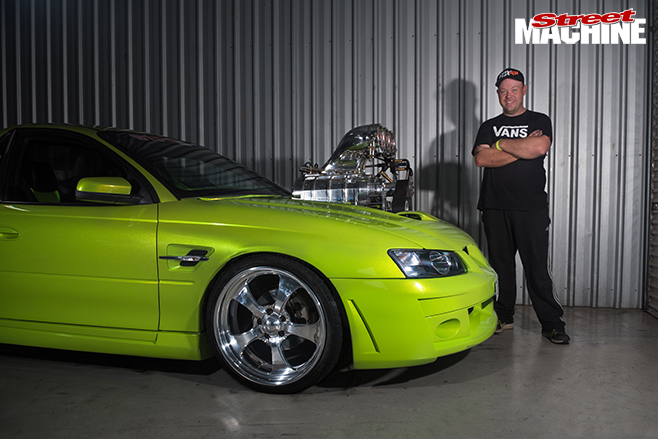 Chris Veitch from Wagga Wagga didn’t hold back when putting his blown 383ci LS1 VZ Maloo through its paces at PCM. “I’ve been having a ball with it,” he said. 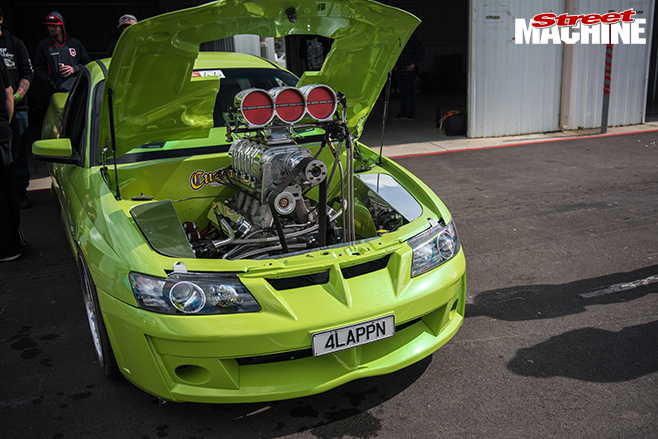 “I took it to Summernats and cruised it, but this is the first time I’ve really driven it hard. The powerskids have been awesome fun!” The rear end is fully tubbed and runs a shortened nine-inch diff on four-link suspension. 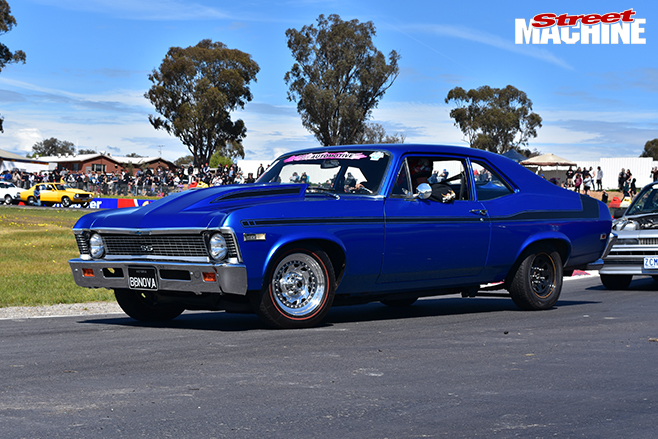 David Hobbs’s 1968 Chevy Nova is a slice of pure American muscle, running a 496ci big-block force-fed by a V7 Vortec blower. PCM was David’s first event with the car. “I bought it pretty much as is, then added the blower set-up, re-tuned it, and made 470kW (630hp) at the tyres. 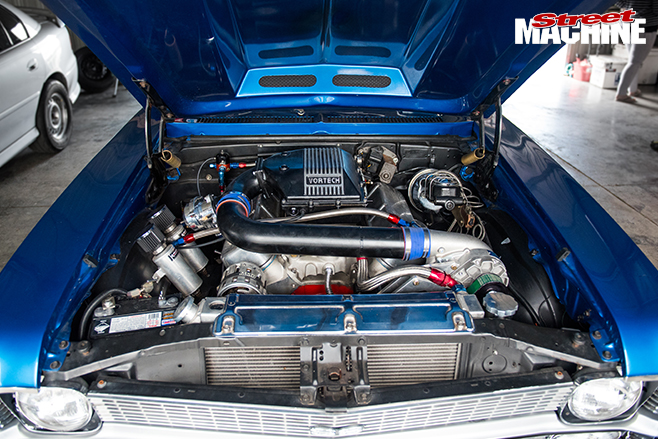 It still runs the Muncie four-speed and original 12-bolt Posi rear end with 3:55 gears,” he said. “I’m going to make some changes once we get home; it will be fitted with a Powerglide and re-tuned with a bit more boost.” 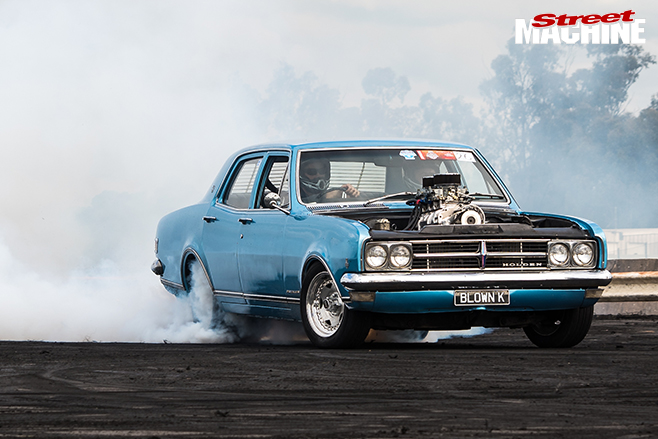 This HK Premier is one tough rig, running a 6/71-blown 434ci small-block Chev, backed by a Turbo 400 and nine-inch diff. “I built the car just for fun,” owner John Yosiffidis said. “I just like getting it out and throwing it around the pad at events like this.” 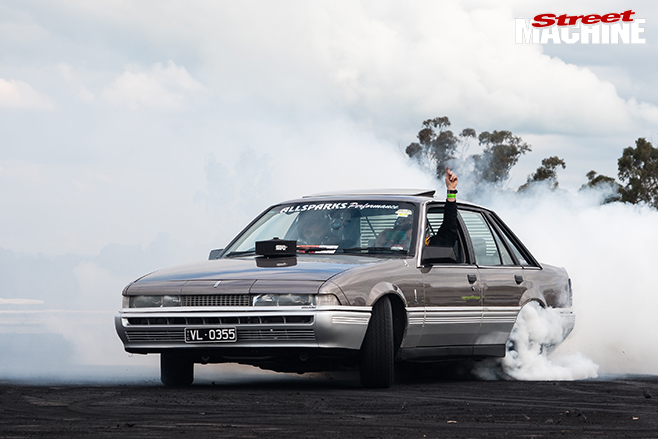 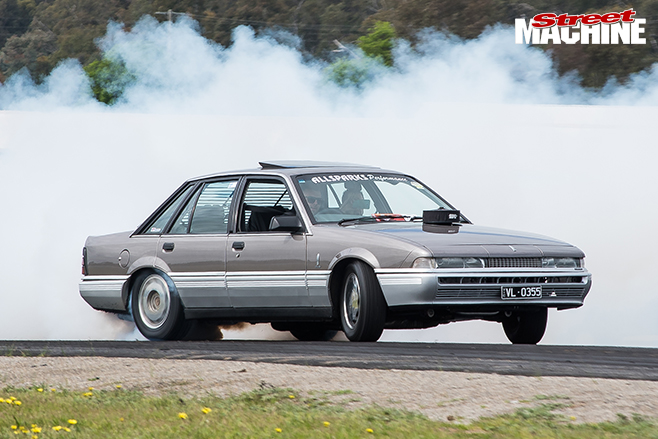 “It’s an original factory 5.0L full-house Calais, factory sunroof, the lot.” Now fitted with a 355ci Holden built by James at Melway Competition Engines and tuned by Allsparks, the VL has run a quarter-mile best of 10.80sec. 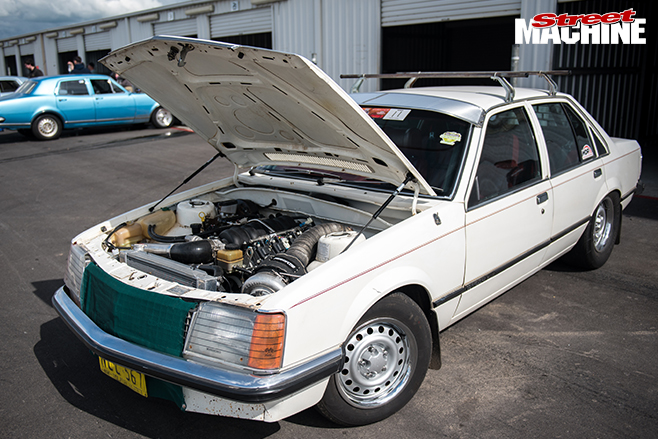 Dusty Benson from Wodonga hit the track in his poverty-pack L-series VC Commodore sleeper. Dusty had the VC out for some much-needed seat time in preparation for STREET MACHINE’s upcoming Drag Challenge. 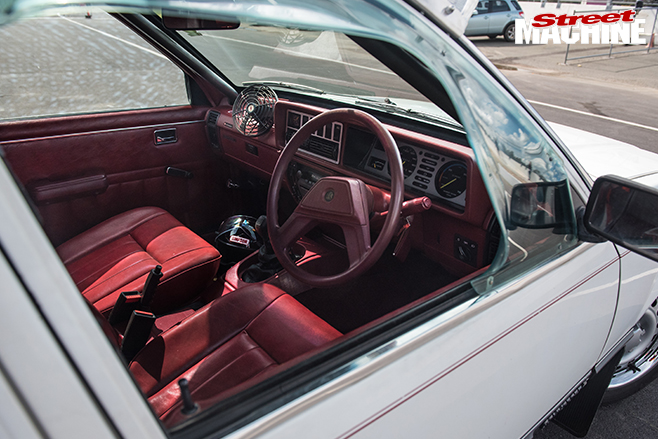 “I originally found the car at a farm clearance sale up near home,” Dusty said. “It’s running a stock LS2 bottom end with a head and cam package. The turbo is a GT42. It’s got a Powerglide and a locked 10-bolt Salisbury diff. It’s been good to get some laps in and get a feel for the car.” 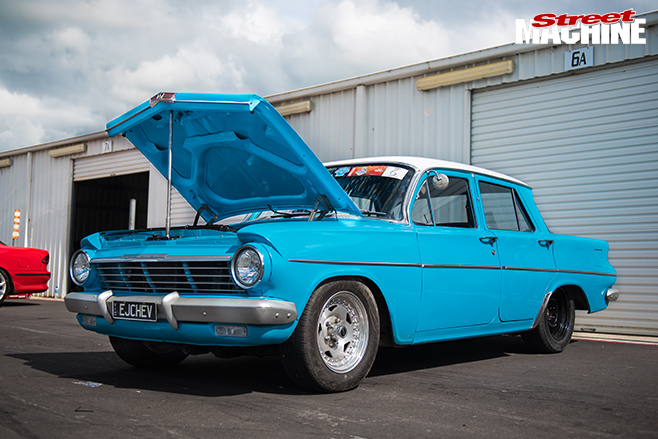 Jeff Brennan from St Leonards in Victoria brought his LS1-powered EJ over to PCM for some track time, but ran into transmission issues on his first cruise lap, sidelining him for the rest of the event. It’s a tight squeeze in the engine bay, but the EJ is fully registered and engineered with the LS1. 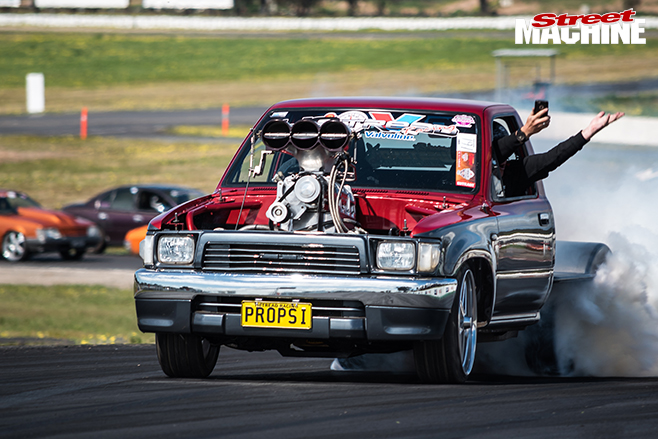 David Pendlebury brought his PROPSI HiLux down from Sydney for the weekend, and came third in the burnouts and second in the powerskids 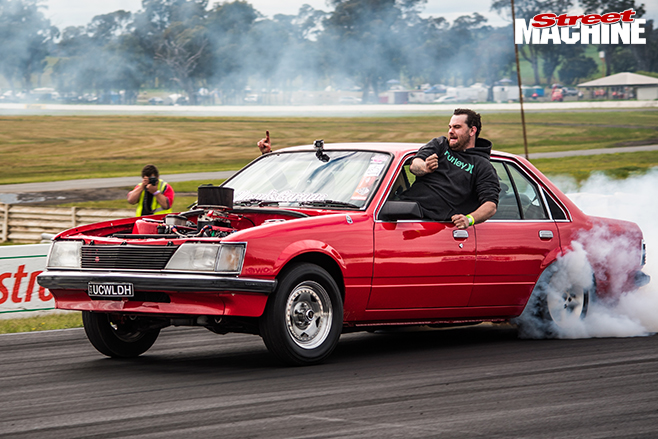 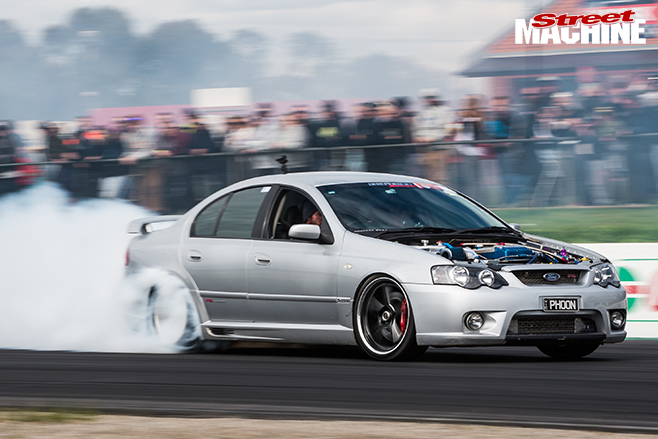 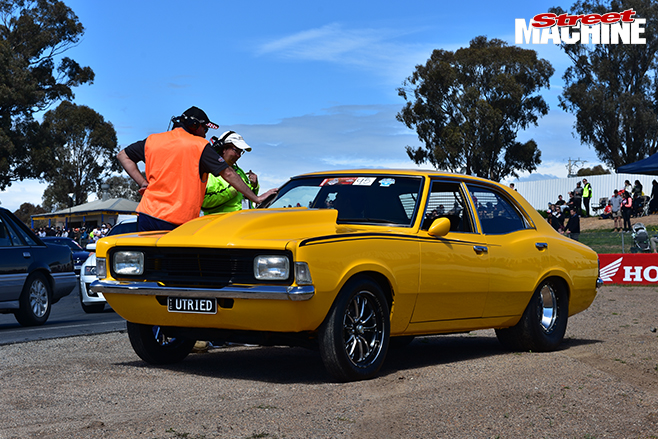 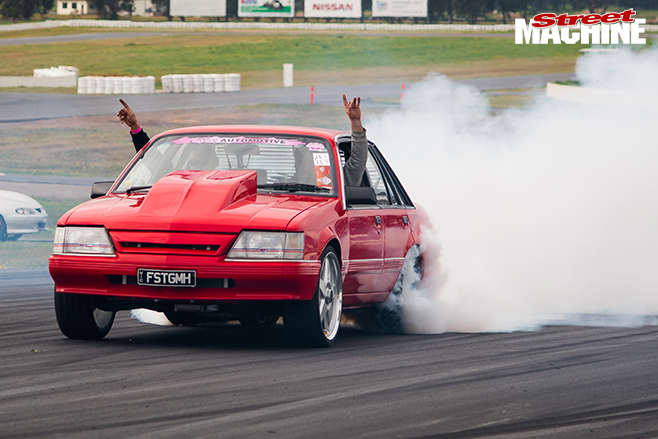 Matt Smoors took out the powerskid competition in his blown VK Commodore, smoking out the full length of the front straight