Darryl Smirk might be pushing 70 but he can still build a killer car.

This article was first published in the July 2015 issue of Street Machine.

In what is quite possibly a first for Street Machine – and possibly any car magazine – we have now featured the cars of a father and his two daughters, and to top it off, they’ve all been Mopar products. Perth’s Darryl Smirk has two beautiful daughters, who have obviously been brought up the right way and developed a love for hot cars. They both have stunning – and tough – Valiant Chargers that we featured in SM, May ’07: Katie’s silver VH Charger was featured in Iron Maiden, while Cassie’s blown and methanol-fuelled E55 was the cover car.

You could argue that Darryl’s ’70 Challenger is the most girly of all of the cars, with its pretty pink paint looking all, well, pretty. Of course, any Mopar lover knows that unmistakeable hue is Panther Pink, and Darryl does have a case he can plead in his defence: “The car was already painted when I bought it.” I’ve always said if you’re going to paint your car pink, you better make sure it’s fast, and Darryl’s got that well and truly sorted. Underneath that gloss-black fibreglass bonnet and T/A scoop is an all-aluminium Mopar Performance Hemi. The block is from World Products and comes with siamesed bores. Combining a 4.25in bore with an Eagle 4.15in-stroke steel crank pumps the legendary 426 Hemi jumps right up to 472 cubes. It’s clearly a case of: If lots is good, then more must be better.

Even though the car already had a cast-iron crate Hemi in it, Darryl wanted a little bit more and considered hotting up the one he had – but that would be too easy. “I built a completely new motor from scratch. It took over two years just to research and source all the parts. There’s nobody here that can talk Hemis,” Darryl says. 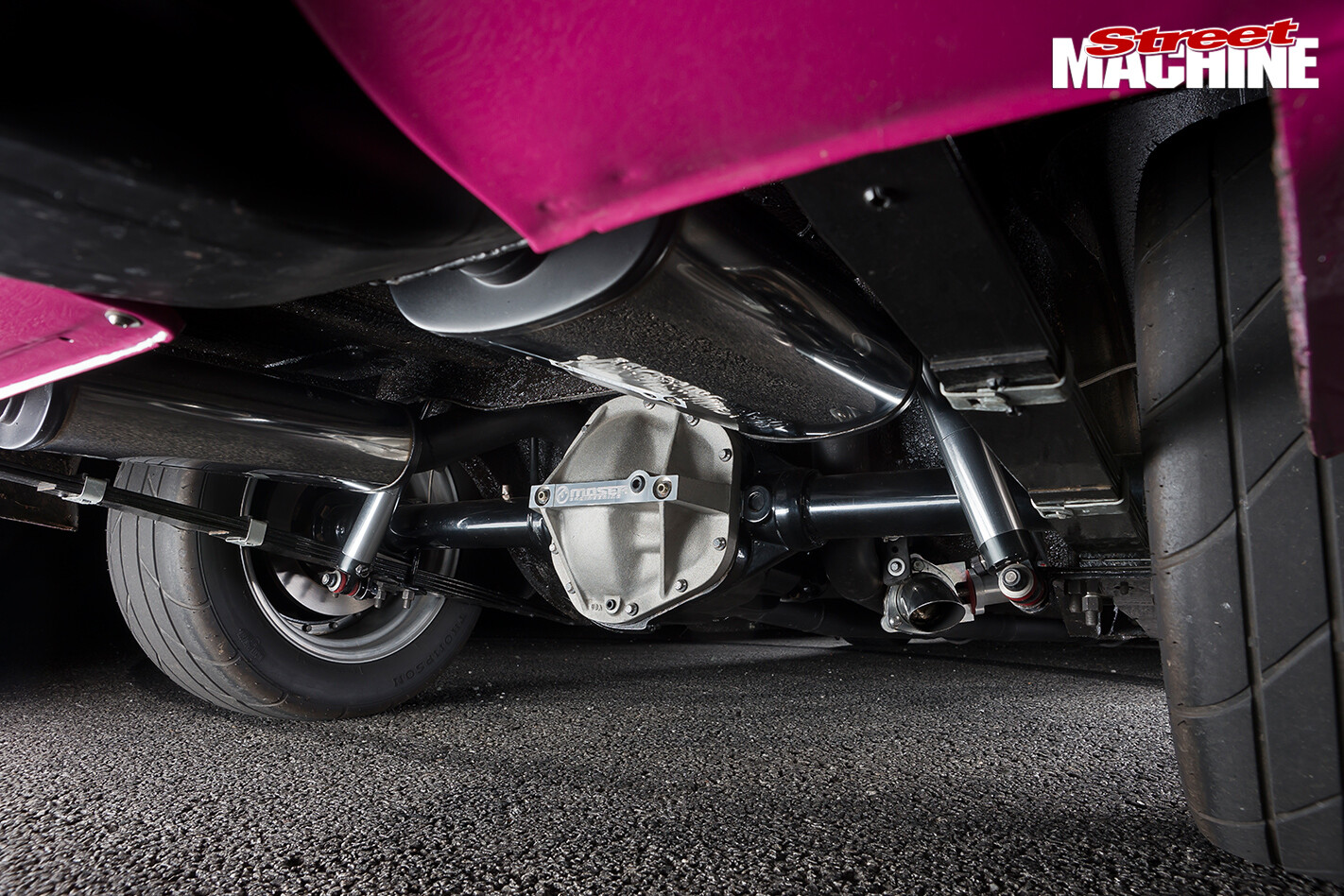 “My main reference was a guy called Richard Nedbal in California from Fast Man EFI. Before he got into EFI and computers, he was building Hemis and I got a lot of good information off him. I ended up buying the injection for my car, Katie’s car and the next car off him. He’s also got a book called How to Build Max-Performance Hemi Engines. It’s a brilliant reference book and it is virtually how I built my Hemi – from his book. When you’re buying stuff from the US, you’ve got to be spot on with your knowledge otherwise you bugger it up and it costs you a lot of money.”

The injection system that Darryl is quickly becoming an expert on is the FAST EZ-EFI. The Mopar/Barton single-plane intake has been drilled to accept the multi-port set-up and fitted with eight 50lb injectors. Combined with the 1375cfm throttlebody and Aeromotive fuel system, it’s quite capable of emptying that 100-litre fuel cell in no time at all. But Darryl’s got that base – partially – covered as well. 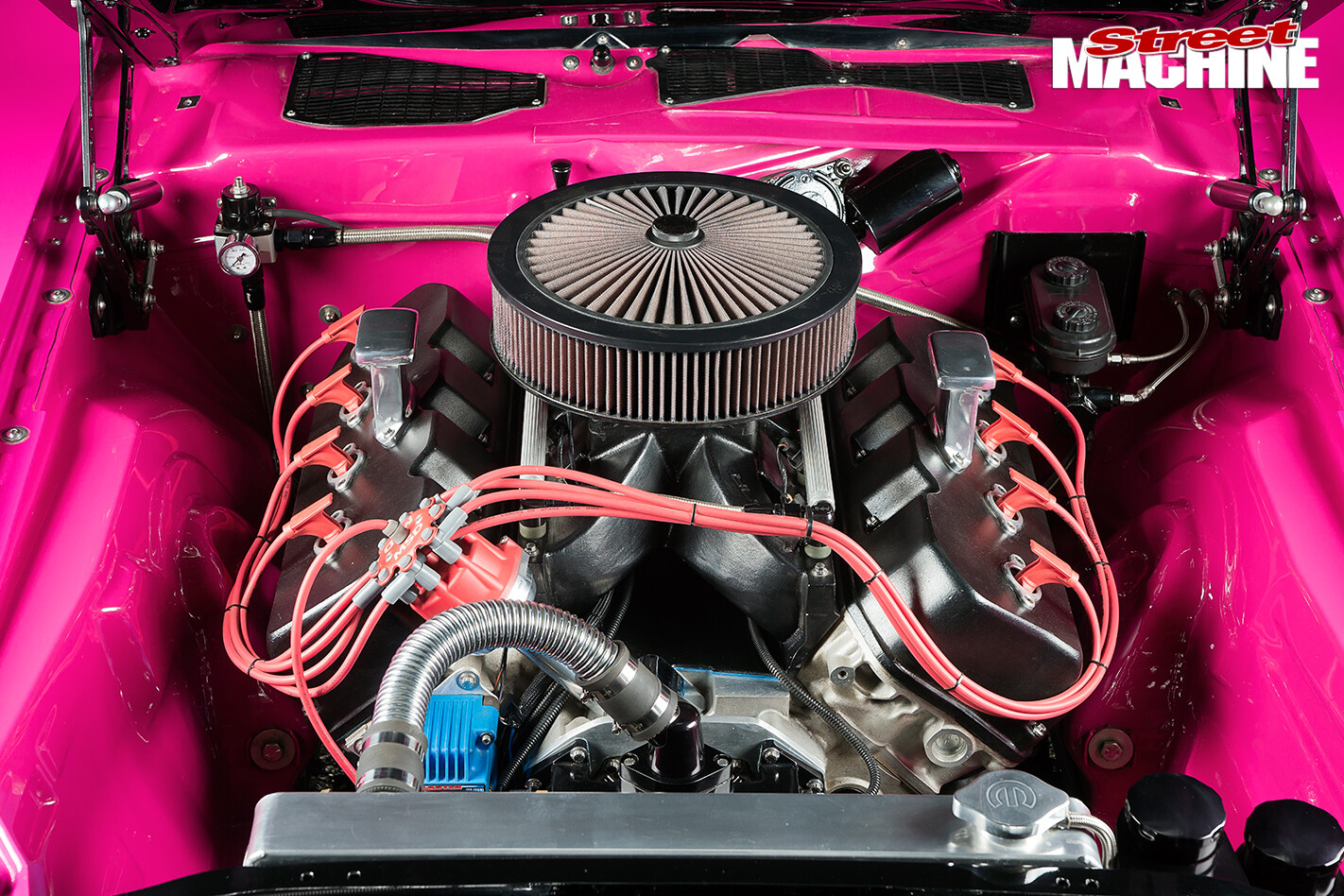 Sitting behind the big Hemi is a trusty 727 Torqueflite, and behind that is a Gear Vendors overdrive unit. Even with the 3.55 gears, the engine ticks over at just above 2000rpm at freeway speeds. The other benefit of the GV unit is that it splits every gear, effectively turning the trusty old three-speed ’box into a six-speed gearbox. Welcome to the 21st century – in style!

Getting a Hemi to fit into one of these cars shouldn’t be that hard. After all, they came fitted from the factory, how hard could it be? “I wish you were here!” Darryl laughs. “I always put Chrysler engines in from the bottom. I mount them on the K-frame, sit the gearbox on the gearbox mount and then lower the car down on to the motor.

“Well, I started to put it in and thought: ‘I need to take the water pump off, need to take the rocker covers off.’ I got it as far as I could get it and the number one exhaust rocker was up against the shock tower and it would not go any further. I thought: ‘Shit, what do I do now?’ “The way I got around it was to turn the motor over until that rocker went down and I got the clearance. You can put your finger underneath the shock tower and feel where it chipped the paint off, that’s how close it was.

“With the standard K-frame you can move around a bit, but this car’s got an RMS AlterKtion coil-over front and it has shock supports that go up either side of the chassis, so you can’t move it.” Keep that in mind, all you SM readers who are thinking of swapping in a 426 Hemi. The car is finished off with a set of ROH rims with black painted centres. They are quite a bit larger than your standard rim, at 16x7in and 17x9in, and with the 225/50 and 295/45 rubber they fill the guards nicely and do not look too modern or out of place on the car. They also fit over the drilled Wilwood discs and four-spot calipers.

Yep, Darryl’s Challenger has got plenty of go, enough whoa and a touch of show – the perfect combination if you ask me.