Neat paint, perfect lines and a 6/71 under the bonnet. Sweet!

With a flash of Red and White, this Plymouth Belvedere took centre stage in the life of Dean McDonald and his family. This article on Dean's Belvedere was originally published in the June 2011 issue of Street Machine.

DEAN McDonald went out to get a 440 motor for his third Chrysler Royal but came home with a 1959 Plymouth Belvedere. Not quite what he expected. Not what his partner, Jodi, expected either. She probably accepted the idea of the motor because Dean has almost made a habit of doing up and selling Royals but the ’59 Plymouth was a shell — and a rough one at that.

Luckily it turned out that this specific year’s Belvedere has been Jodi’s favourite car ever since someone snapped a shot of her and her dad next to one, when she was about 20. 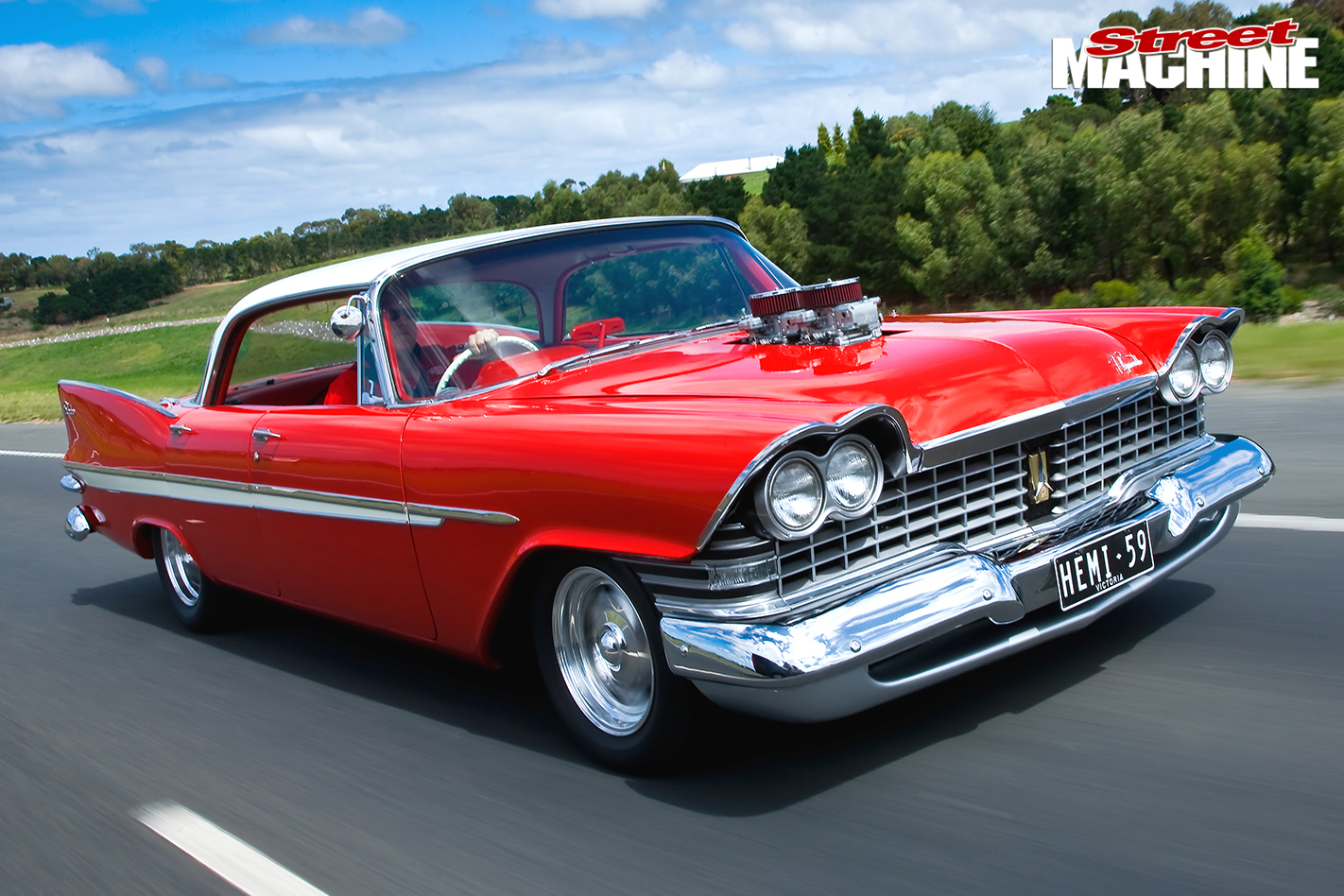 “That was a bit of a spin-out,” Dean says. “I didn’t even think she’d know what they bloody look like! There was no problem letting me buy it.”

And with that thumbs-up, six years of loving labour began. Dean had long wanted a blown Hemi and this car was the perfect excuse for it.

“I just love Hemis, the basic look of them,” he says. “I’ve been looking at them in hot rods for years and yeah, I just wanted one. They are the motor with that era of car.”
The big 392ci Hemi was released a couple of years before the ’59 Belvedere but was only made for two years. Dean imported a 354, which would have been a big improvement over the 318 that’d originally graced the now-empty engine bay, but the 392 was really the only way to go. 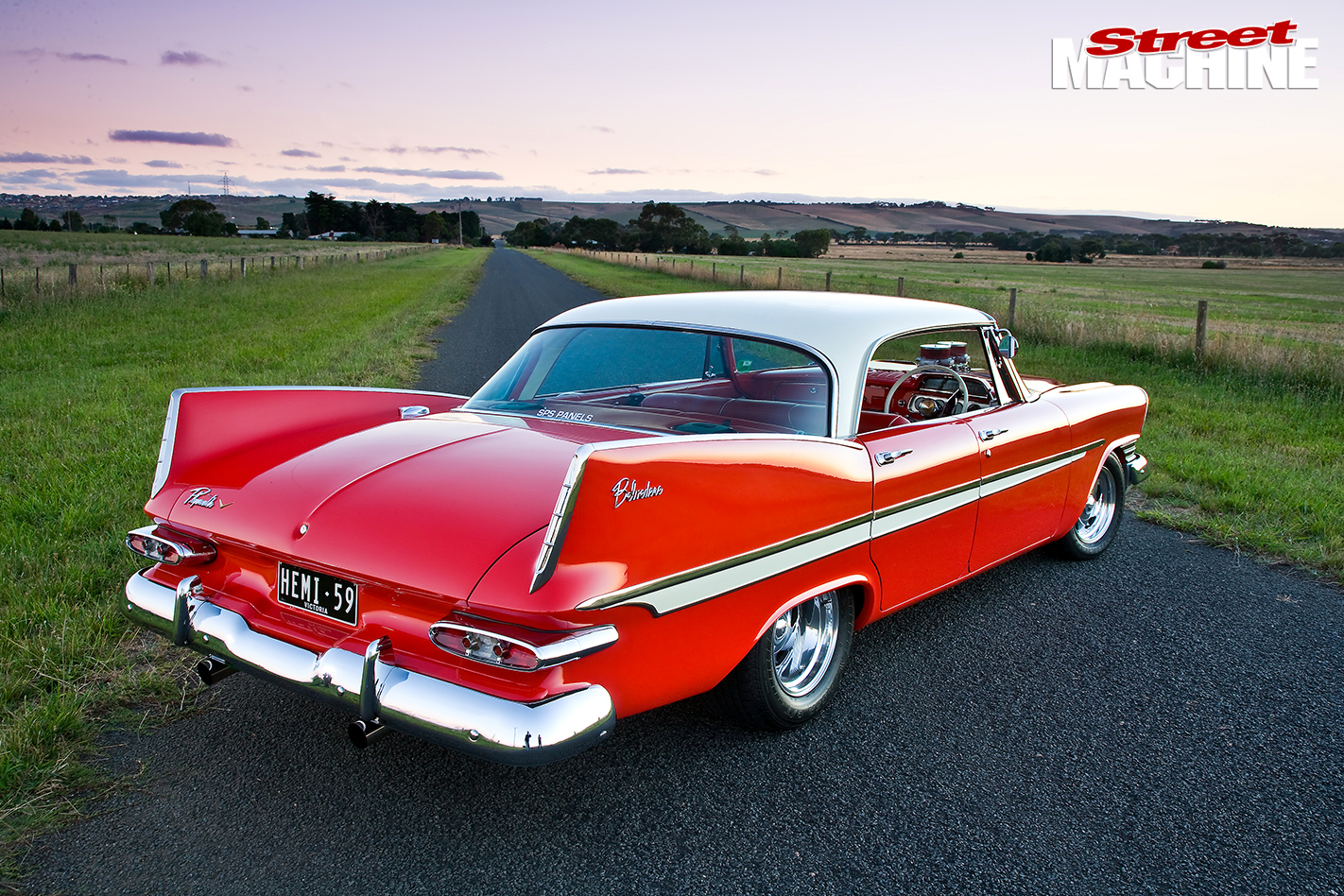 “They basically look the same, it’s just the 392 is a bit taller in the heads — taller deck, longer stroke. I always wanted the supercharger but I was hesitant of having it through the bonnet so it was all about getting the engine as low as I could. I didn’t want it in anyone’s face, you know?”

To that end he modified the engine and gearbox sumps and settled the donk way down into the tight space between the torsion bars. That allowed him to keep the supercharger under the bonnet and he loves the reactions it gets. 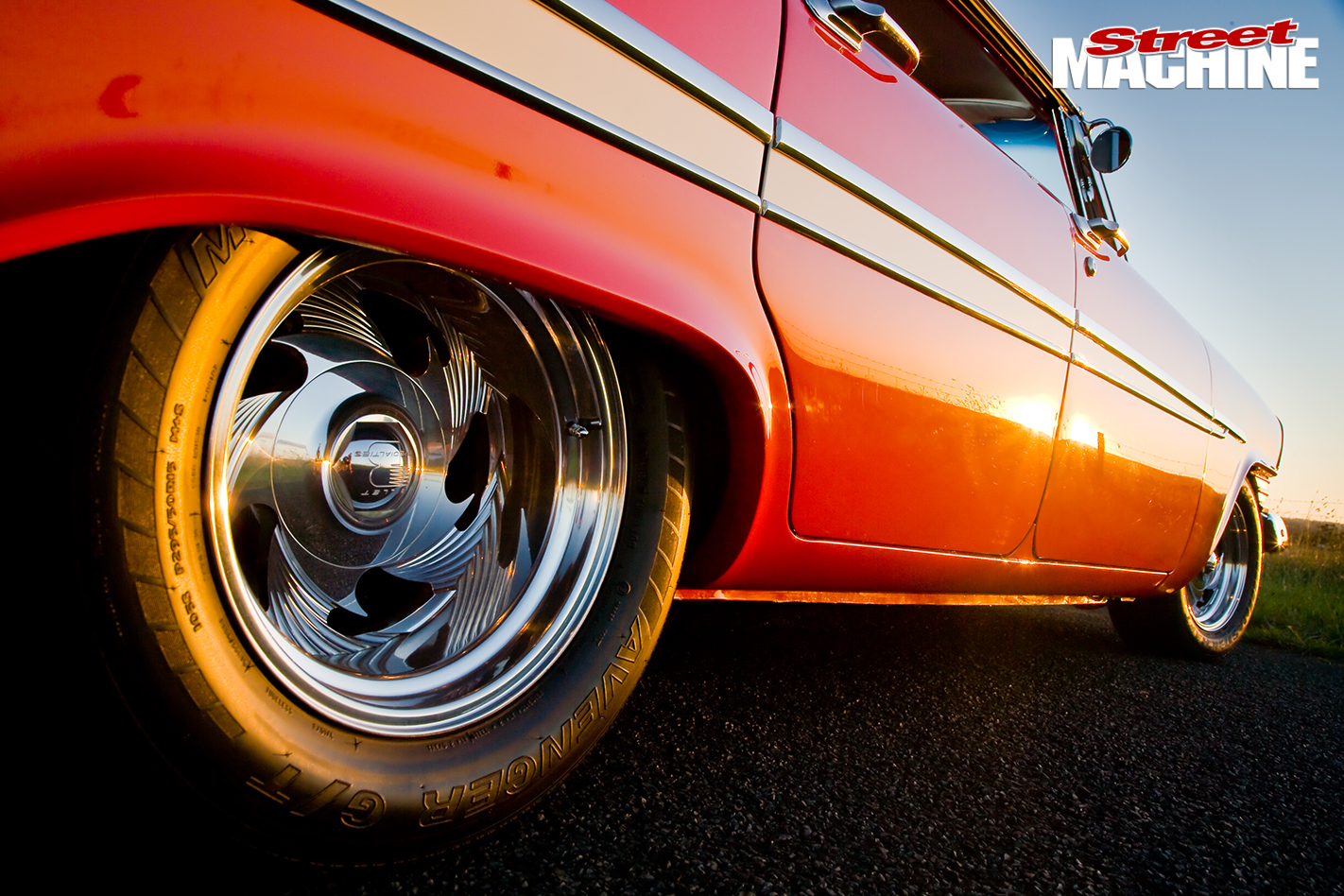 “The other day I popped the bonnet and a bloke said: ‘Jesus! You wouldn’t know that’s under there!’”

Dave Reynolds did the bulk of the engine build, with Dean putting in plenty of hours too.

“It’s a big, heavy car, so it needs big torque,” Dean says. “I wasn’t going for big horsepower or a revvy motor. I built it with the standard crank and rods, which are good for 800-odd horsepower, and I put Ross forged pistons in it. They were meant to be 8:1 but they ended up being 8.7 or 8.6:1.” 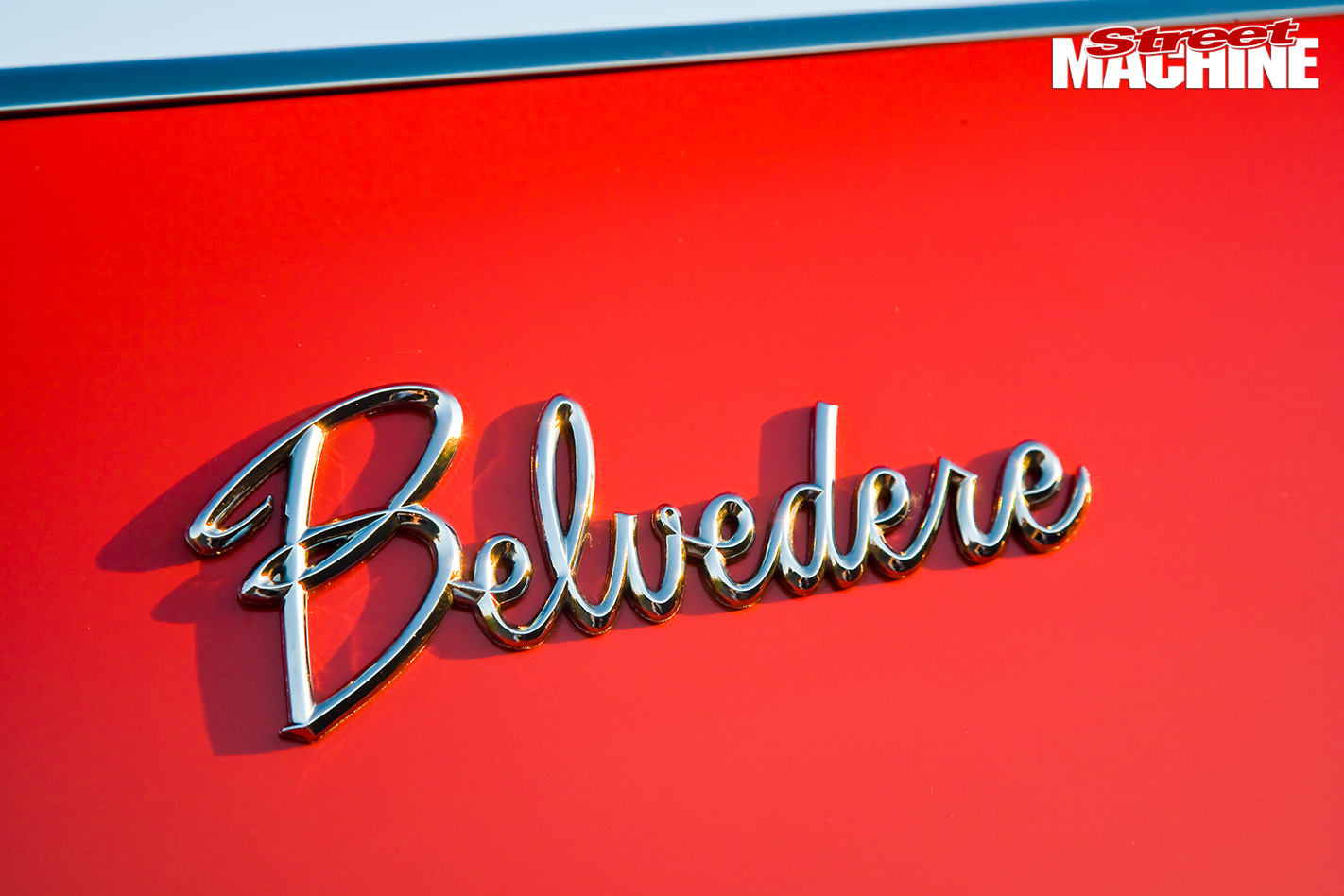 He also slotted in a mid-range camshaft, with the lift and duration measuring up at 0.519 inches and 236 degrees respectively.

The whole shebang isn’t quite sorted out yet but he says it’s a pussycat all the same.

“I wanted to have a reasonable idle at the lights so Jodi could drive it, and it’s all sort of worked out pretty much how I wanted it.” 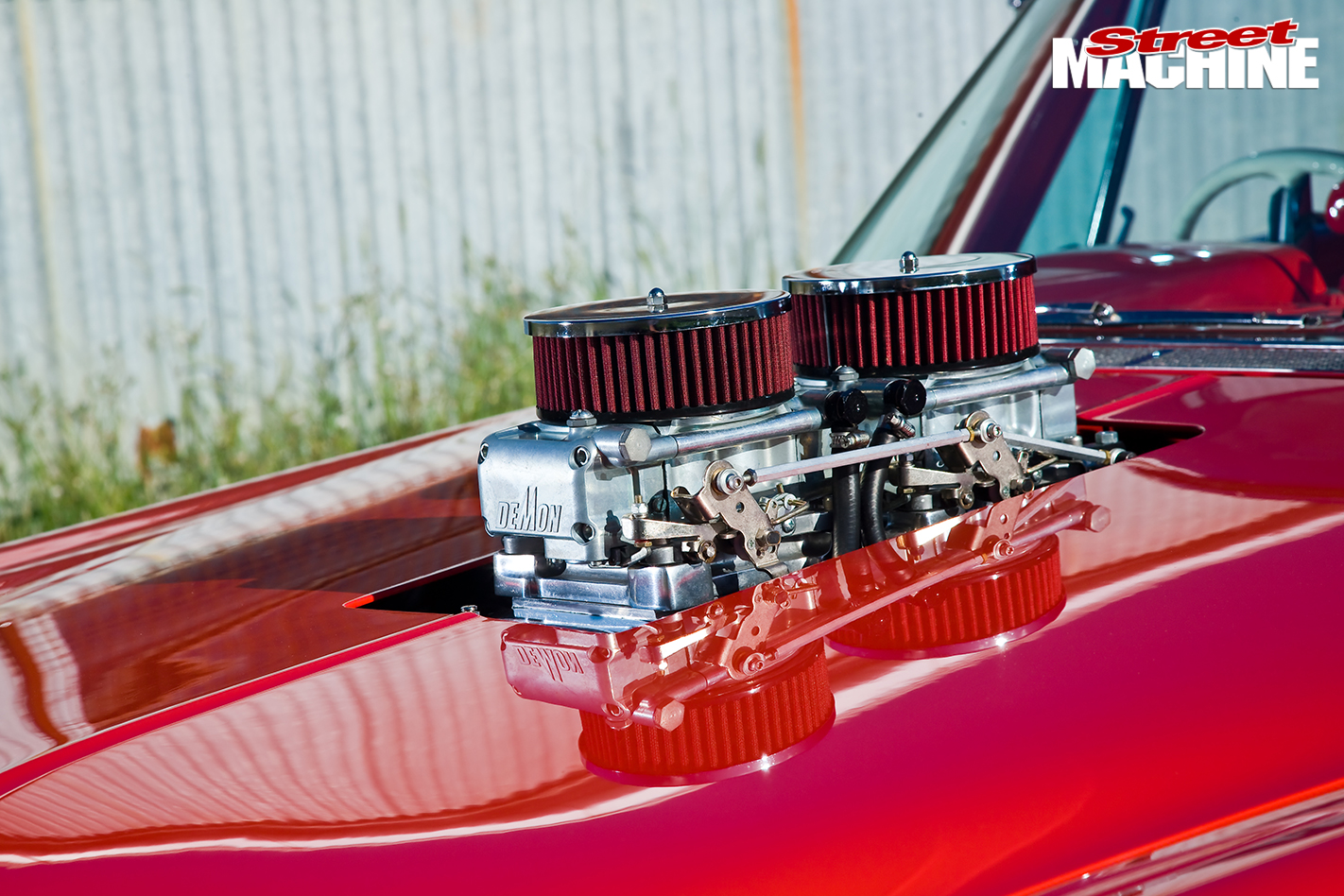 That motor sits in an award-winning engine bay. Dean went to town on it, re-sheeting the firewall, smoothing the inner guards, modifying the radiator support panel to handle the BA Falcon-size radiator and getting rid of anything extraneous. Many bits were moved under the dash or guards, and he and Dave spent lots of time conspiring to hide the wiring. 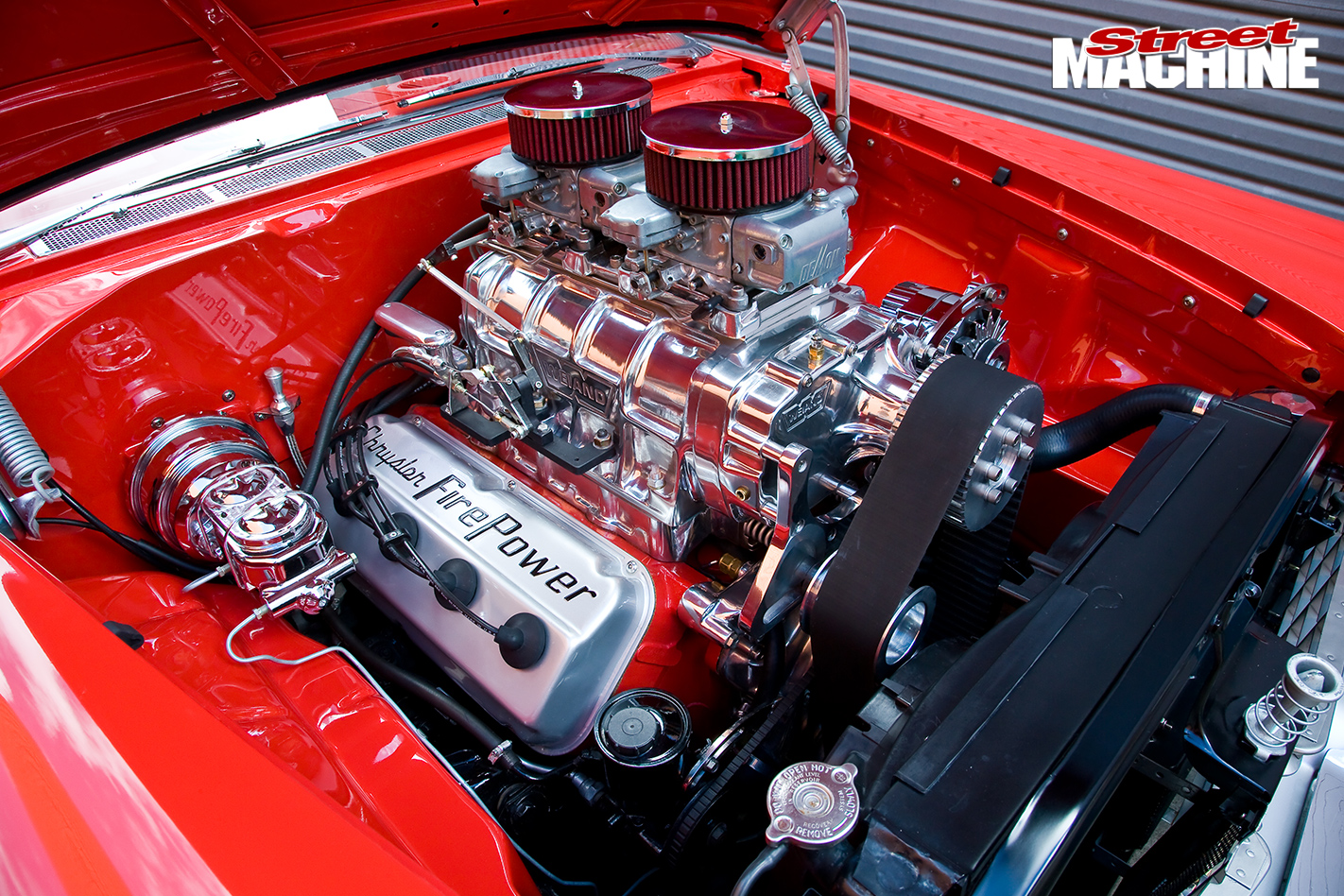 “After I stripped the paint off, we found awful things,” Dean says of the rust and dodgy repairs.

Adrian Fry spent countless days over the years in Dean’s garage, fixing up the panels, rebuilding the doors, and getting everything straight. Dean learned a lot just by watching him. 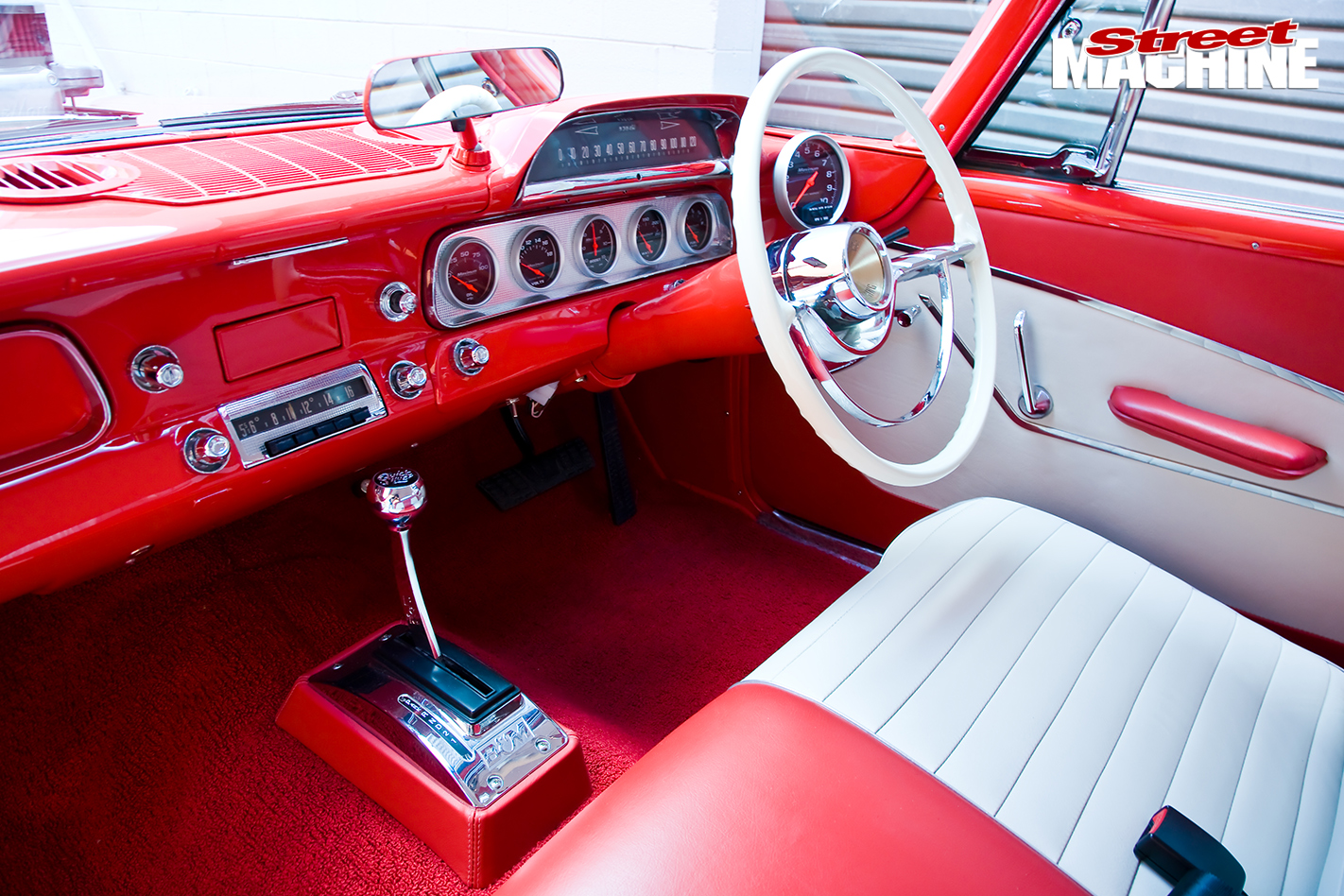 “Mate, that was awesome! He’d learnt the trade off blokes who’d done older cars. I was impressed with the way he tackled the job.

“Another good thing about him building it in my shed was he’d go away and leave me jobs to do, which I was quite capable of. And the car was always at home for me to work on, whereas if you send it off to a panel beater, it’s gone and you can’t do anything on it, can you? I was stoked about that.” 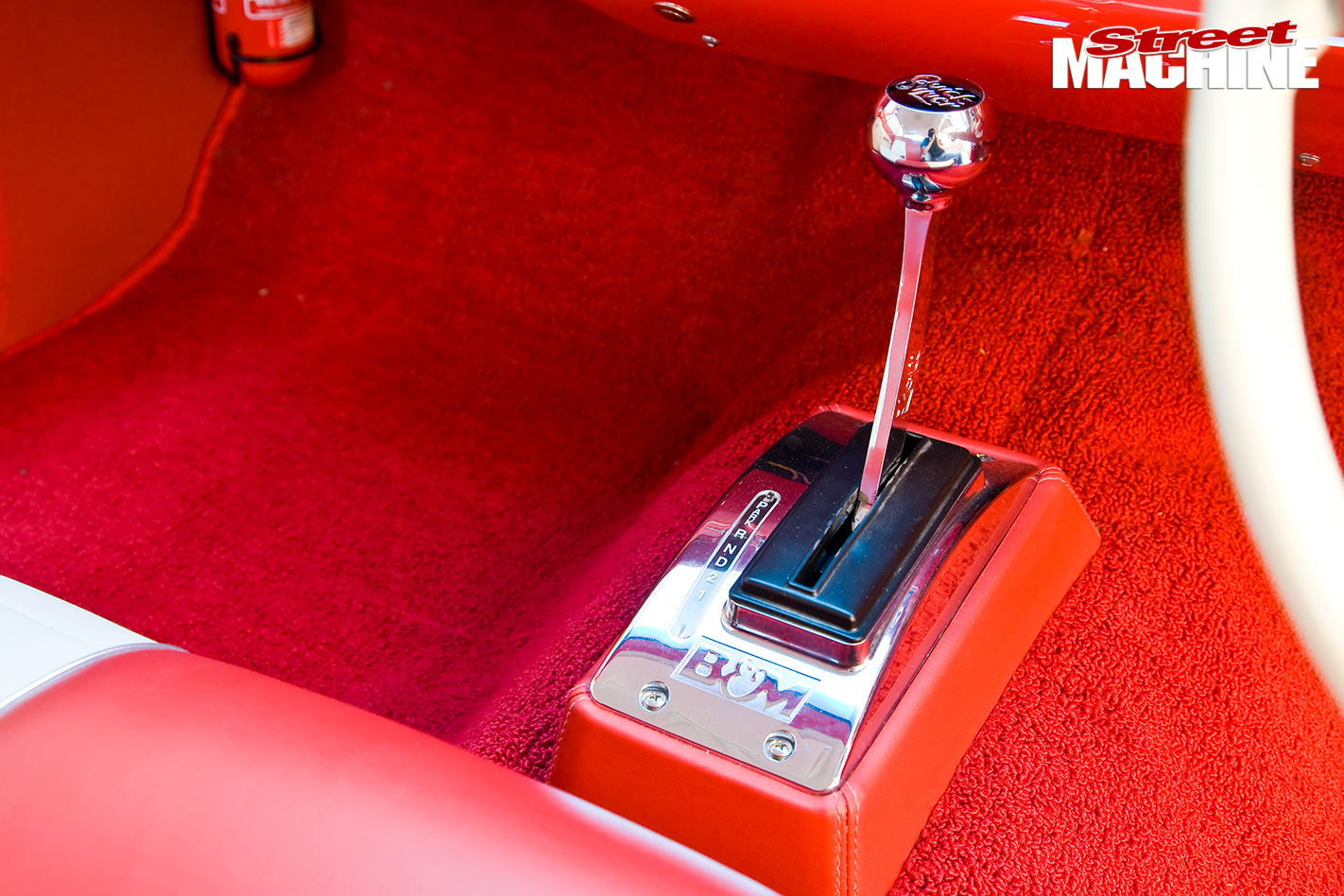 He’s just as rapt with the job Griff’s Trim Shop did on the interior, starting with almost nothing. The guys asked Dean to make aluminium inner panels for the doors, which they then trimmed. They teamed up in a similar way to get the roof lining sorted too. The back seat had to be altered to fit around the light tubbing job Dean did to fit wider rear wheels, and the carpet he ordered from America wasn’t good enough so Griff’s made one from scratch. 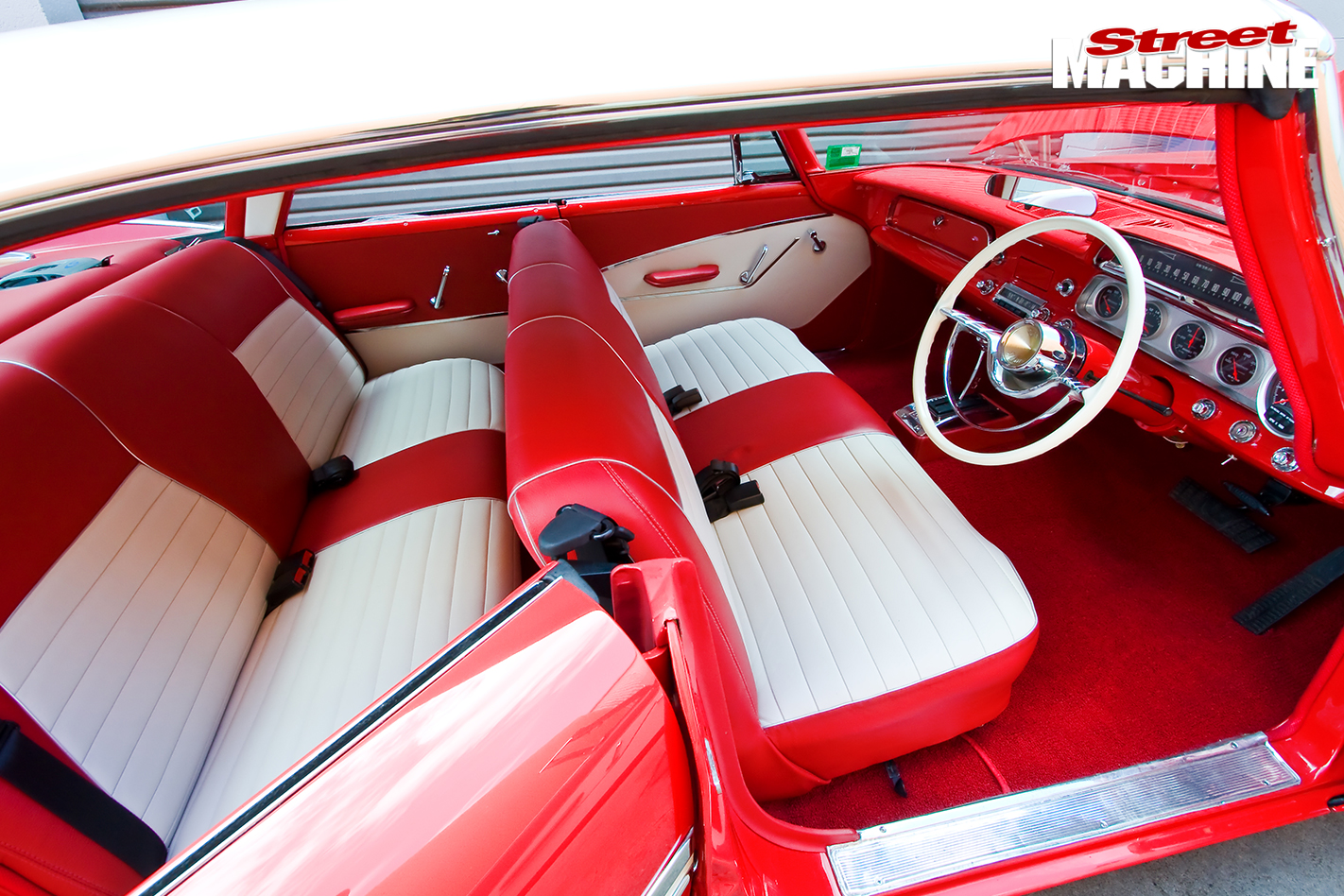 Another cool touch is the painted interior metal — mouldings that’d usually be chromed.

“I’ve seen a few cars where they’ve tried to change the interior and it hasn’t worked — the safest way was to go with the factory pattern, though it’s obviously a lot brighter in red than the original.” 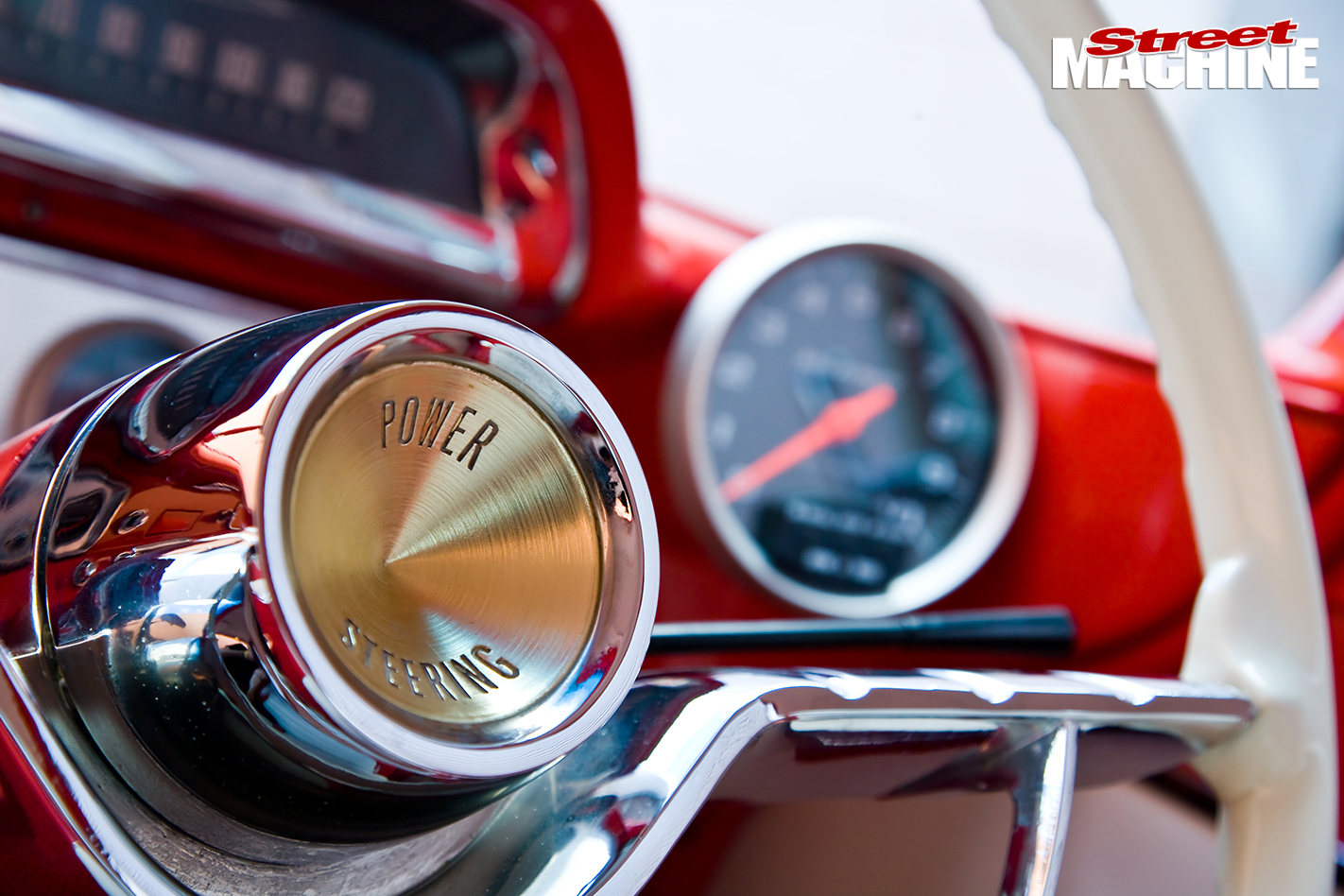 Brighter maybe, but everywhere you look you can still see the Plymouth’s originality shining through. That was intentional.

“I wanted to keep the classic 50s style,” Dean says. “Heaps of chrome, all the badges, the original interior because they got it right back in 1959, but with a little custom twist to suit my own taste.”

And Jodi? “I love it. It’s easy to drive, like a big couch,” she says, before admitting to one of the best reasons to own a bright red pillarless ’59 Belvedere: “I’m a show-off.”