IT WAS the talk of the town at the 2007 Chryslers on the Murray and there was no finer example of what Mopar muscle is all about: that they’re bulletproof racecars built to be used on the street.

Over the past few years Mopars have sky-rocketed in value but for Michael Innins, owner of this immaculate 1969 Road Runner, the car was more about more a lifestyle statement than the opportunity to own a rare and highly collectable classic. “I liked the shape of the body,” he recalls, “and at the time, this was sold as the street racer’s car, with a high-performance engine package in an otherwise pretty spartan car. I bought the car back in 1991 while on holiday in the USA. When the car arrived in Australia I took it home and it seemed only natural to do a test burnout. While pulling second, I accidentally grabbed fourth gear at 6000rpm and tossed a rod out the side of the block – those left-hand drive manual-shift cars can be tricky!

“I later found out that while the car was in a Sydney import bond yard, the workers had been flogging the arse out of it, and my brother’s 1969 RT Dodge Charger. So it sat under a cover until four years ago, when I decided to get stuck into a full restoration.”

When Michael finally stripped it down, the body wasn’t too bad but he replaced both quarter panels and the boot floor to help with panel gaps and alignment and to reduce the need for filler. 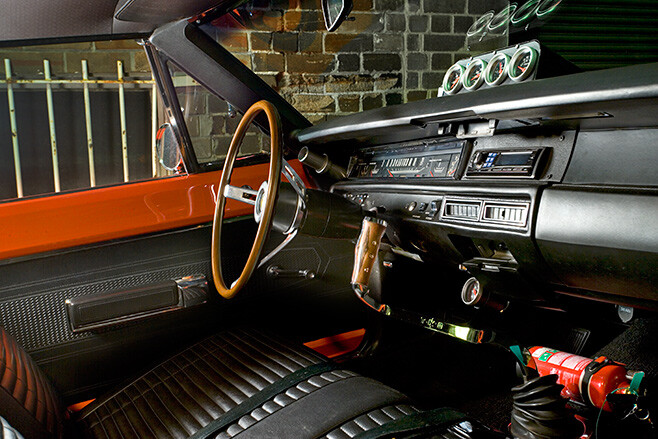 “I tried to retain the original style of the car as much as possible so the modifications are limited to removing the original guard-mounted blinkers and fitting subframe connectors to strengthen the uni-body.”

An aftermarket fibreglass bonnet was installed as the factory items were held on by four bonnet pins, and there was no provision for bonnet hinges. A further challenge was to hunt out someone interested in restoration work, who had a spray booth big enough to fit the car.

The stock motor was yanked and rebuilt by Trick and Mansweto in Sydney. Behind the 620hp big-block you’ll now find a Tremec five-speed tranny with a matching-era Hurst pistol-grip shifter, McLeod half-paddle clutch and a Lakewood scatter shield. At the back is the legendary Dana 60 diff, which was one of the toughest factory differentials ever fitted in a road car. It is simply massive and with the five-speed transmission Michael was able to fit super-short 4.11:1 Richmond gears for comfortable highway cruising and sprint work. Other rear-end extras include a Detroit Locker and Mark Williams billet axles.

With the owner intending to make use of all his 620 ponies, the braking system was upgraded with a Mopar Performance Powerbrake booster and master cylinder combination pumping massive 11-inch ventilated discs on the front. Just a little better performance than the standard drums. All brake lines have been replaced and to get better brake-pedal feel, Michael upgraded the caliper hoses to braided line.

The interior is sparse, as were most Mopar muscle cars, and has been restored to minimal original – with a few upgrades. The dash has been modified to accept a custom air-conditioning unit plus a set of Auto Meter oil-pressure, fuel, temperature, volts and vacuum gauges.

2
Warner Brothers licensed a number of cartoon characters for Mopar muscle cars. One of the quirky extras on this model was the ‘beep-beep’ horn which simulated the Road Runner’s famous call

Everywhere you look there are simple but practical improvements, such as the electric vacuum pump under the front guard to improve brake boosting, staggered temperature-controlled cooling fans on the massive alloy radiator or the alloy washer bottle fabricated into the front bumper bracket. The workmanship is second to none, too – at its first outing at Chryslers on the Murray the car won Top Paint and Panel.

Undernearth is as impressive, with every component detailed and massaged to perfection. Michael has added plenty of extras, yet the car weighs the same as a new Commodore (1680kg) due to lightweight components. 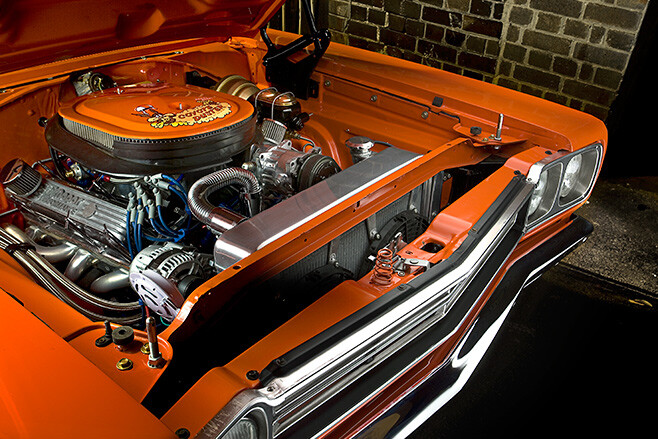 “The biggest problem during the build was sourcing parts and having to rework substandard reproduction parts to ensure they’d fit,’’ Michael says. “The other issue was trying to remember just how things fitted together after removing them four years earlier!

“I’ve only done about 240 miles in the car so far; I want to spend the next six months enjoying and driving it before some serious track duties.”

For 40 years the 426 Hemi engine has been the basis of Top Fuel and Top Alcohol engines around the world, so the volume of go-fast information available for them is endless. Same goes for the 440. And since all the cranks in Mopar big-blocks (383, 440 and 426 Hemi) are interchangeable, there are heaps of performance parts available for them.

In place of the standard 3.75in-stroke crank and 6.76in rods in Michael’s 440 wedge is an Eagle rotating assembly, with a 4.15in-stroke crank that bumps the capacity out to 490 cubes.

To keep the reciprocating weight down the rods have a 0.990in gudgeon pin (Chevy size), while a set of Program steel main-bearing caps have been fitted with ARP studs to tie the pan rails of the block together and prevent mains-cap flex. 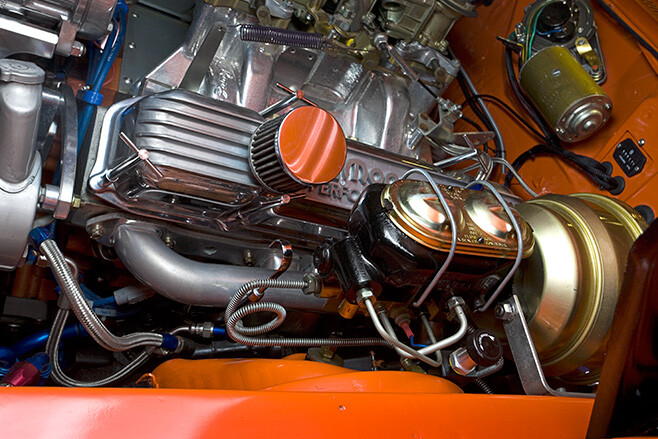 Static compression is around 11:1 and a flat-tappet cam with around 0.620in lift takes care of induction and exhaust. At full valve lift the ported Edelbrock heads flow around 300cfm and are port-matched to a ceramic-coated factory Six-Pack manifold with three two-barrel Holley carburettors.

The centre carb is a 350 and is used for light driving and cruising; when you stand on the gas, the two outer 500 carbs join in to make a total of 1350cfm through six barrels. To enable the carbs to be tuned with standard Holley jets, Promax metering blocks have been added to all three.

A 140gph Mallory pump is mounted at the rear of the car and picks up fuel from a custom sump in the tank; it pumps through half-inch line to a four-port regulator. From the regulator, each carby is fed independently, with a return line back to the tank to ensure the fuel stays cool.

Cool info: In the RoadRunner, Plymouth was looking for a no-frills muscle car that could turn sub- 14-second quarter-mile times and sell for less than US$3000 (1968 prices). The car got across the line on both counts and began to shade the marque's better-equipped GTX. Plymouth sold around 45,000 of the model in its first year. The Road Runenr ran to three generations and remained in production until 1980.