WITH drag racing all but at a standstill in Australia, the local roll racing at Sydney Motorsport Park seemed to be a great option to let off a little steam.

Knowing almost nothing about it, except that you can hold it flat against whoever you want and the events sell out fast, I decided to investigate.

The team from Roll Racing Sydney was great to deal with, and the rules are pretty clear: roll forward together side by side, and when the light goes green, mash the throttle, keep it off the wall, and beat the other guy to the finish line. With this in mind, we headed out to try and upset some late-model cars with my old VG Valiant, POR440.

We made the two-hour drive to the track with dodgy wipers, and – Murphy’s law – it rained, so the meeting was called off just as we arrived at the gate. 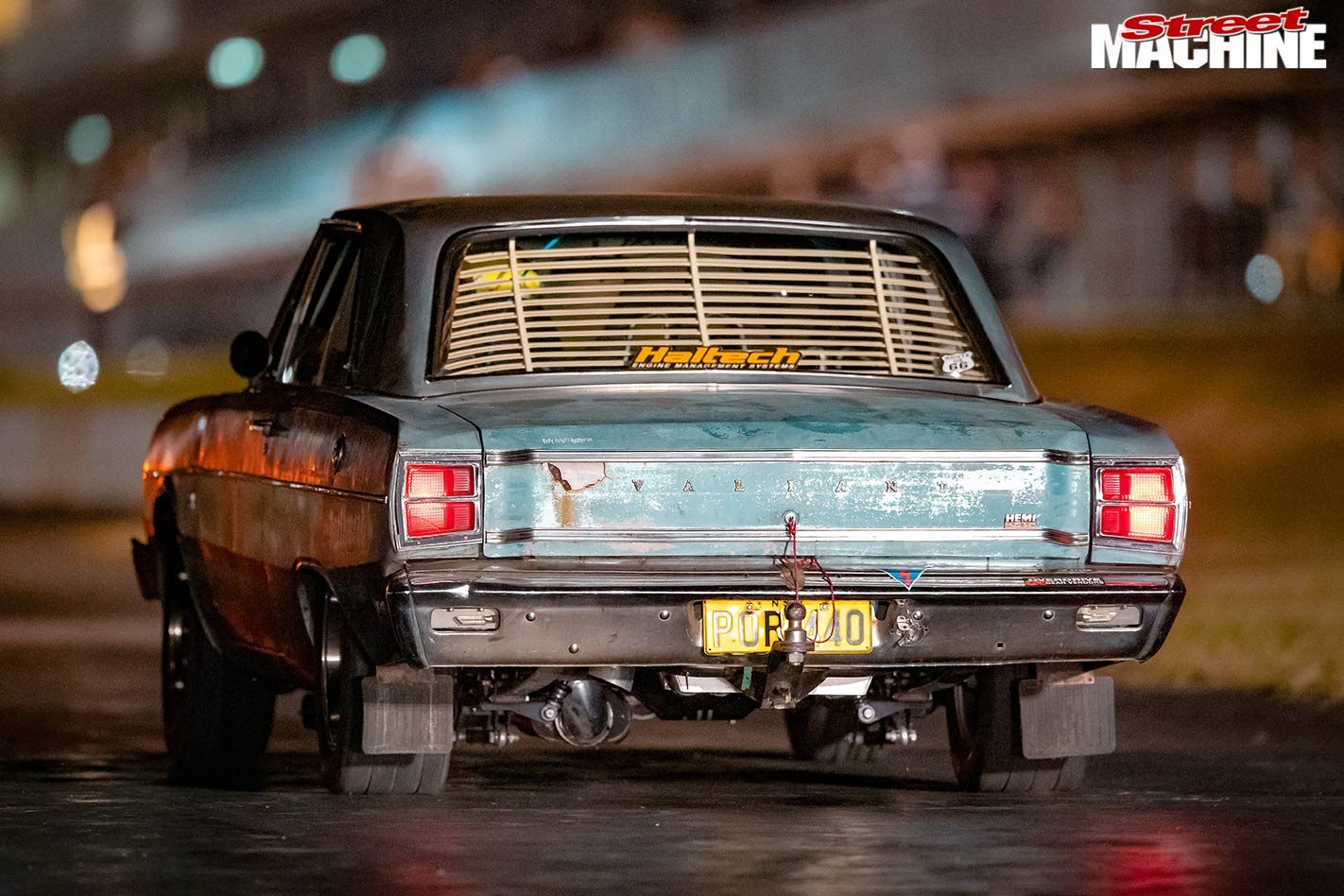 Arby had a blast at his first roll-racing outing in POR440, but it took a bit of getting used to

One month later we tried again, and an hour before the gates opened to competitors, there was a queue that stretched a mile. Eventually we made it to the ticketing box, which is usually a massive dung fight, and we got a super-pleasant girl who made the whole process painless.

After a short drivers’ briefing, we hopped in the lanes, and the mix of cars was incredible. There was almost every late-model sports car and muscle car you could think of, from Lamborghinis to boosted Mercs and Beemers, what seemed like every Nissan GT-R in NSW, Evos, WRXs, MR2s, S2000s, and thankfully a handful of super-tough bent-eights, including an HK Monaro, an SL/R Torana, a blown and injected VL and a bunch of LSA-powered HSVs.

Watch next: POR440 Valiant across the USA

With COVID restrictions in place, the promoters were limited to having just 500 people in the stands. Pit lane was the place to hang. The night air was filled with the twang of sequential gearboxes grabbing low gear to roll forward in the lanes. 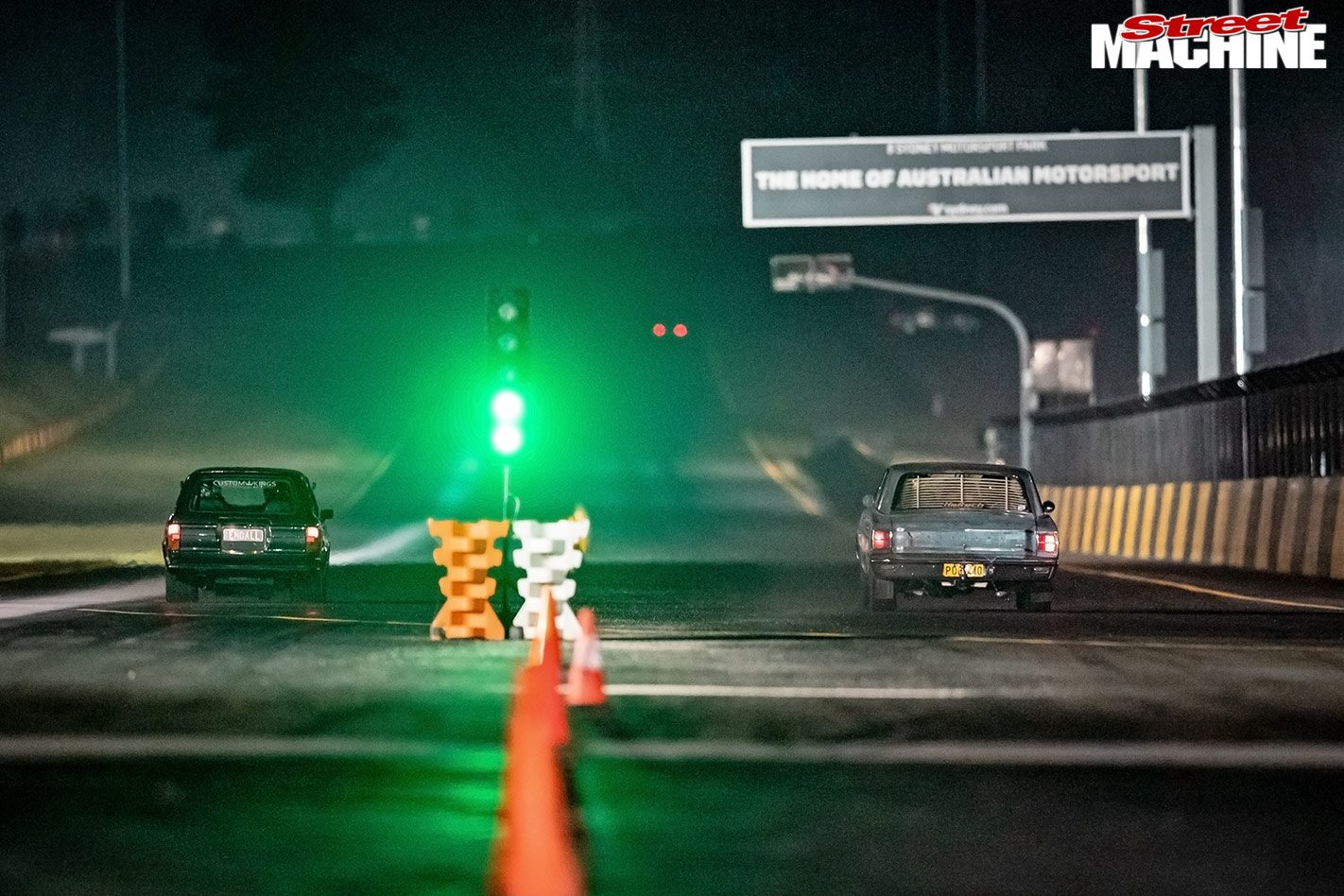 I decided not to drive but let a mate who helps with the car have a steer. Let’s be real: There’s nothing he can really do to hurt it that I won’t. The motor is a two-bit combination, and if it all goes pear-shaped, so be it.

The track had been rented for another event earlier in the day, which bunched things up, so it wasn’t until 7.30pm that we made our first pass. The Val looked slow, because it was.

When you drag race, you’re on boost before you leave, but in roll racing we were leaving from idle, punching it and relying on the little motor to spool up the big turbo, which is why many of the cars running big turbos use a shot of nitrous to get the boost on early. After a bit of messing with the Haltech software, we ramped the boost in earlier. 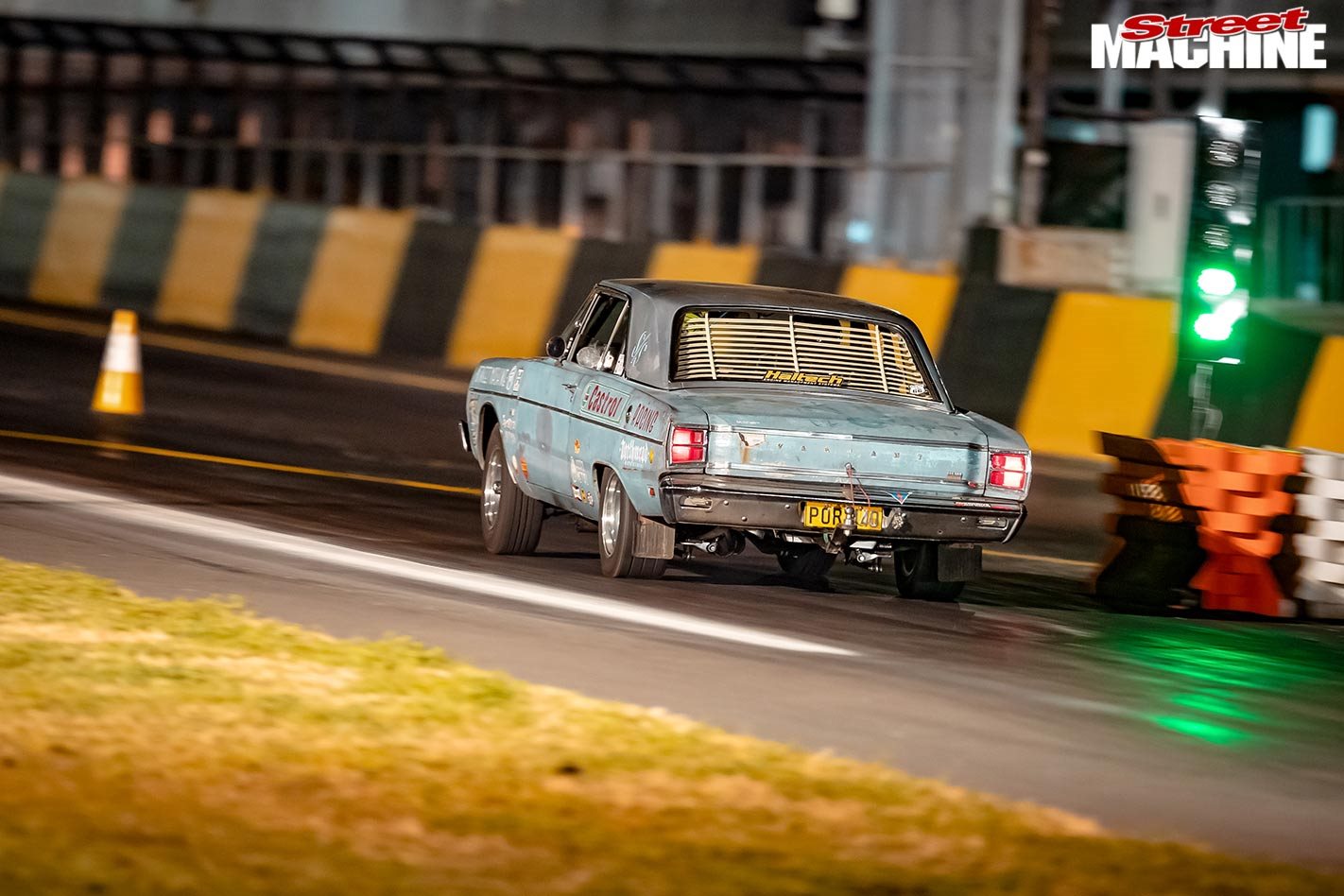 The second pass, on 17psi, was better, so we cranked it a bit more. Next pass, the Val was on a mission, but hit the boost cut at 40psi. Oops, let’s wind that back a bit and remember that this is a stock-bottom-end 5.3L LS.

Next pass, we rolled forward against a stout GT-R, and when the lights changed, the 325ci LS was on song, showing around 36psi of boost on the datalogger. Incredibly, the 235 drag radials did their job and the Val went sailing past in the top end.

The racing was exciting! At the top end of the field, there was a 2J-versus-RB26 war being waged between a couple of workshops. There were some pretty cool sleepers out there, too, including one in full taxi attire with a turbo Barra that was super-quick. In a lot of respects, it was reminiscent of the old days of racing at Eastern Creek, although it would have been awesome to have a commentary team filling in the gaps on who was who in which car and what combinations they were running. 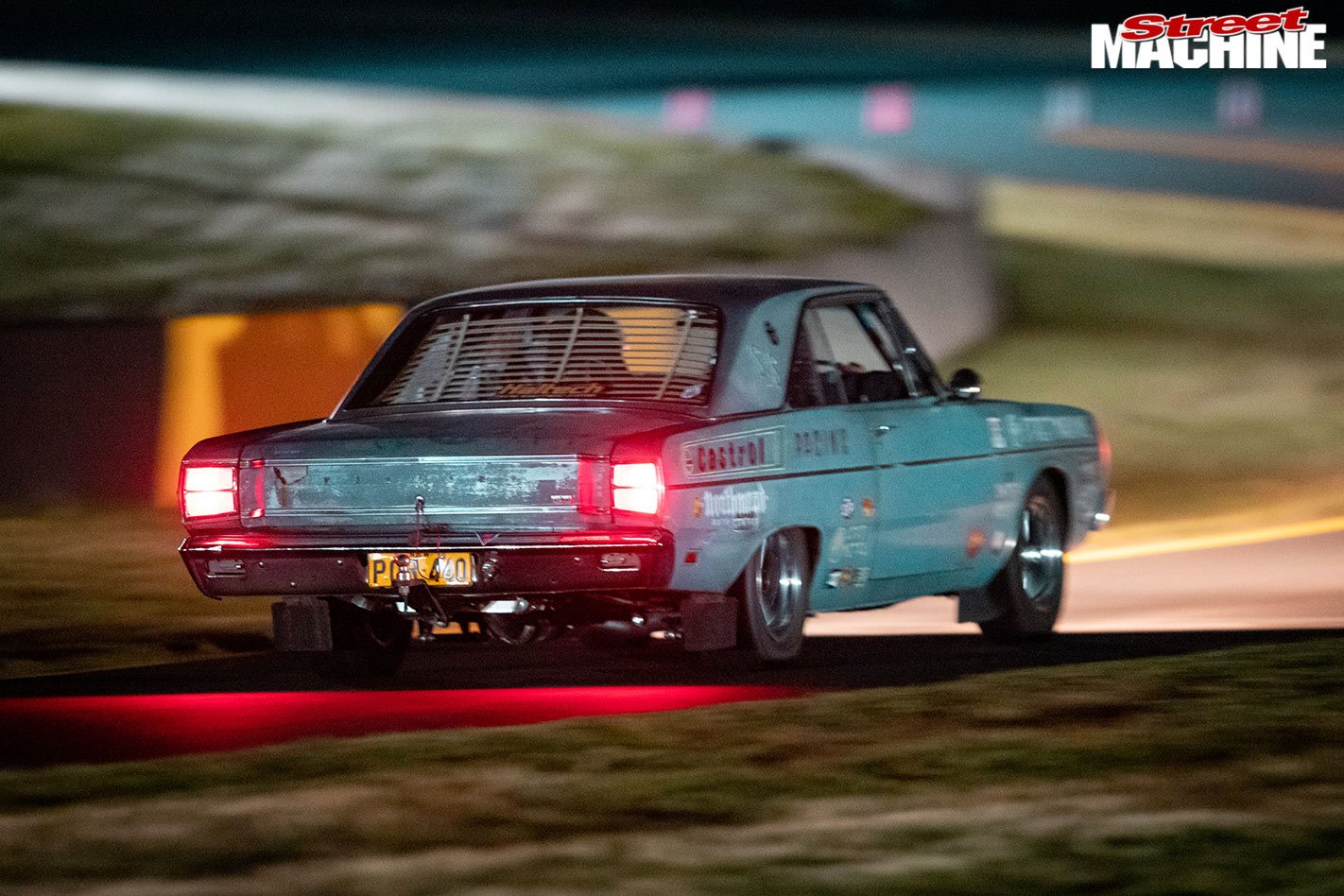 After a bunch of passes, they started the knockout eliminations, and it was incredible how many big-horsepower cars were hooking up on the unprepared surface. First run of the eliminations saw a pretty mild GT-R put a Lambo on the trailer, and the upsets continued throughout the night.

We ended up getting bumped in the third round after half a dozen runs, but the car ran mint all night.

The event culminated with one of the monster GT-Rs and an Evo on ’roids in the final, with the Evo taking the win. 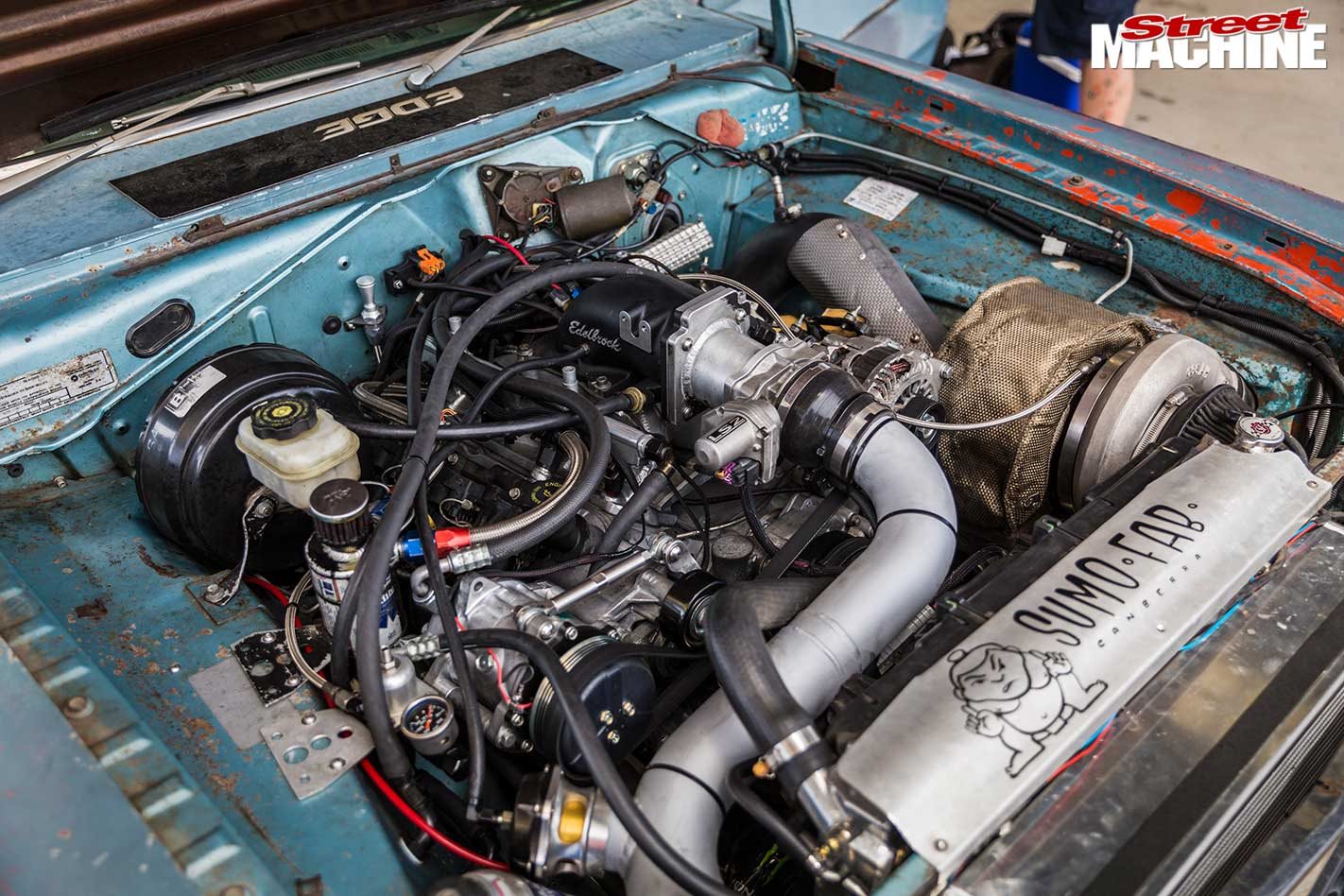 Ultimately, unless you turn up in a car like a GT-R that has had $200K thrown at it, arrives with its own pit team, is making 1500-1800hp at all wheels, and has a big shot of nitrous to get the Pro Mod 88 up and firing, you really have no shot at winning. But if you’re looking for a fun night out with your car, want to race your mates in a real street-style, grudge racing environment, or are just interested in seeing some mega-tough cars doing their stuff, then this is the event for you.

Sadly, it all seemed to be over too quickly. Aside from the limitations on the length of the event, we give it the big thumbs-up. Oh, and for the first time ever, the track food was actually good! 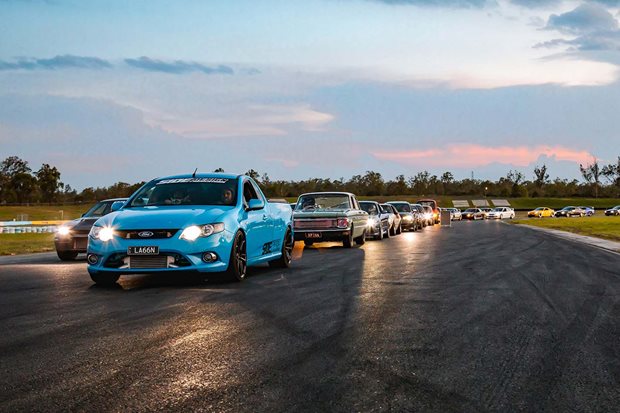