TRUE STREET is one of the most hotly contested classes in the Australian Pro Street Association series, where naturally-aspirated DOT-tyred streeters go head-to-head in the ultimate of first-to-the-finish battles. 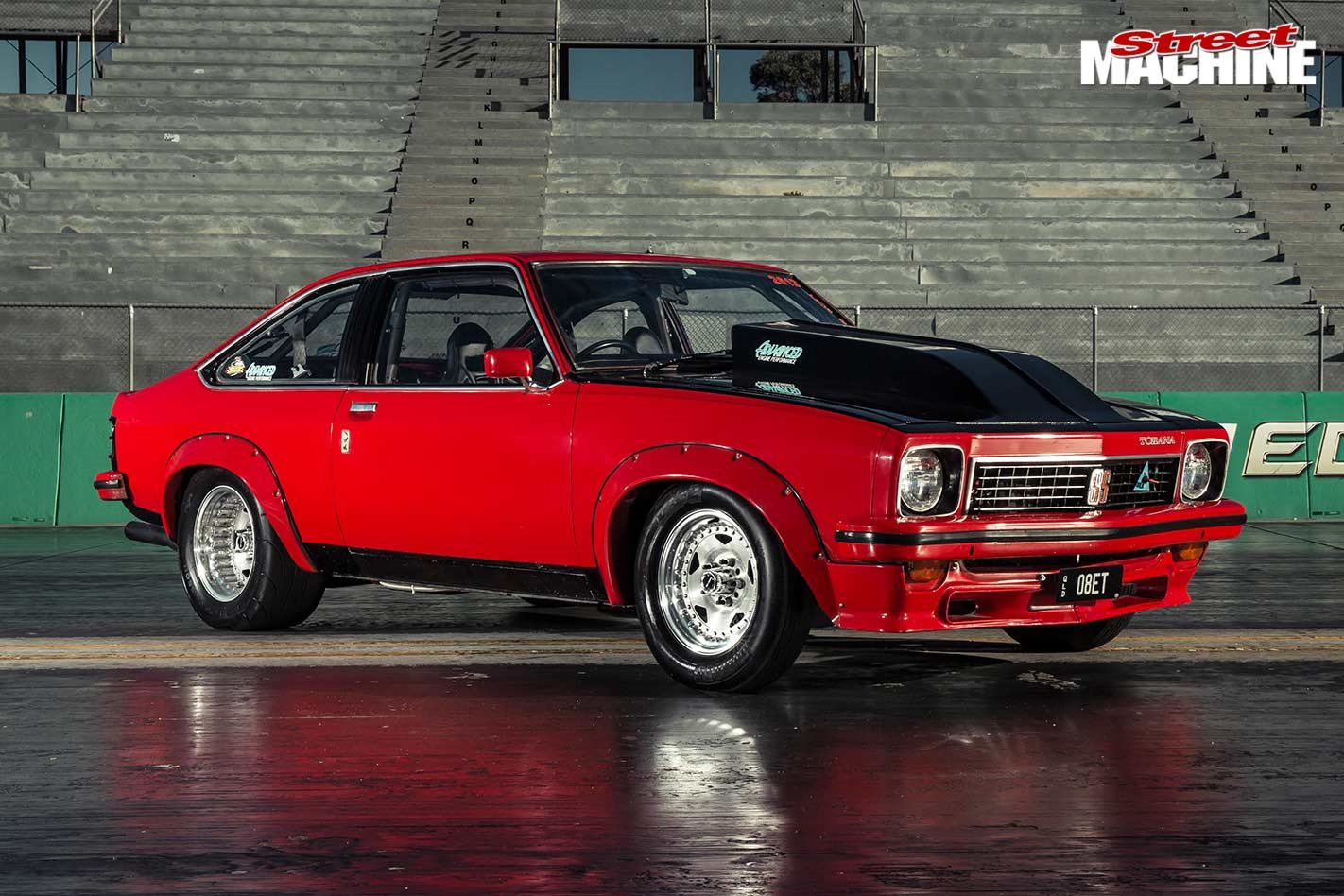 Take away the parachute and this hot hatch could be any old Torana. It certainly doesn’t look like an 8sec streeter

Leading the charge is Janelle Scott, who some have nicknamed ‘The Queen of Pro Street’. Based out of south Queensland with her partner Colin, the 49yo mother-of-two is about to drive their Chevy-powered Torana hatch to its third consecutive True Street title. That’s a big deal, and over the last few years they’ve managed to tweak and prod the red ’n’ black hatch from the 10-second zone right down into the eights.

Janelle admits to always having a bit of a daredevil streak – she’s a trained stunt person and even tried out for a job at Movie World. “I’ve always done crazy things and done a few stunts on fire at speedways and stuff,” she says. But in the background there was always a passion for drag racing, back to her early days sitting on the hill at Surfers Paradise Raceway watching her idols. 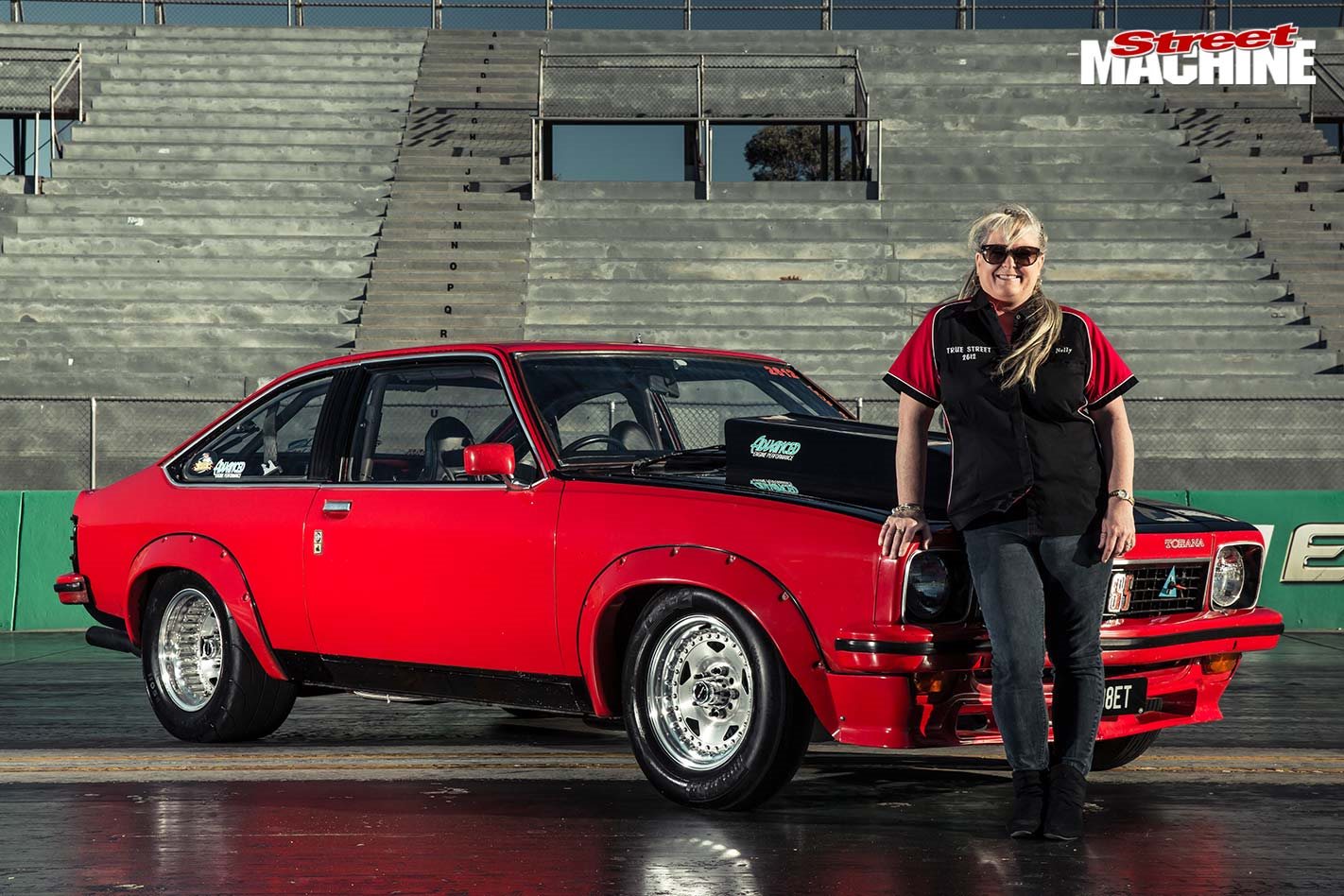 “I suppose that’s where my grassroots love of racing came from, back in the days of watching and thinking how awesome Donna Sizmur (former Super Stock Champion) was. But I never had the opportunity. Being a single mum, you don’t think of pursuing things like that.”

Nothing’s forever and Janelle rediscovered her passion for the quarter mile through her second husband Colin. 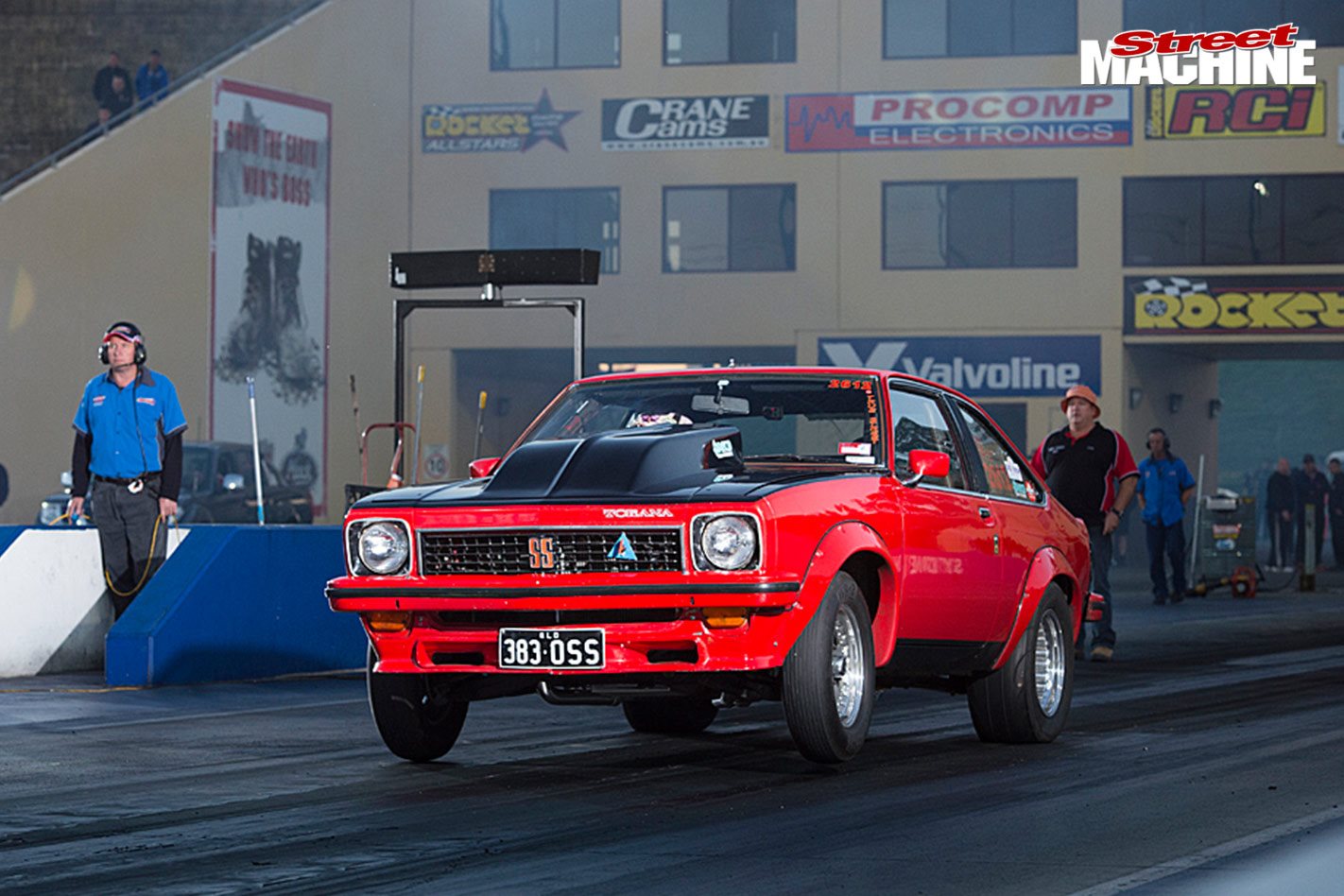 “It was purely by accident, I suppose. I had fallen in love with the car and used to drive it ’round the street everywhere, and so Col said, ‘Why don’t you take it up to Willowbank one day?’ and we did,” Janelle says. But instead of having one go and saying, “Okay, that was fun, but I’ll leave it to you,’ Janelle found herself at home behind the wheel.

“My very first pass, I had no instruction whatsoever. Col told me nothing except to get in it and floor it! I think I ran a 12-something. It was just from idle and I had no idea what it was going to feel like. But by the third pass I was already in the 10s. I guess he thought it would take a long time to get used to the track, but by that third pass I’d already bettered poor Col’s time,” she laughs. “So it wasn’t great for him in that sense, but I think that he saw there was something there.” 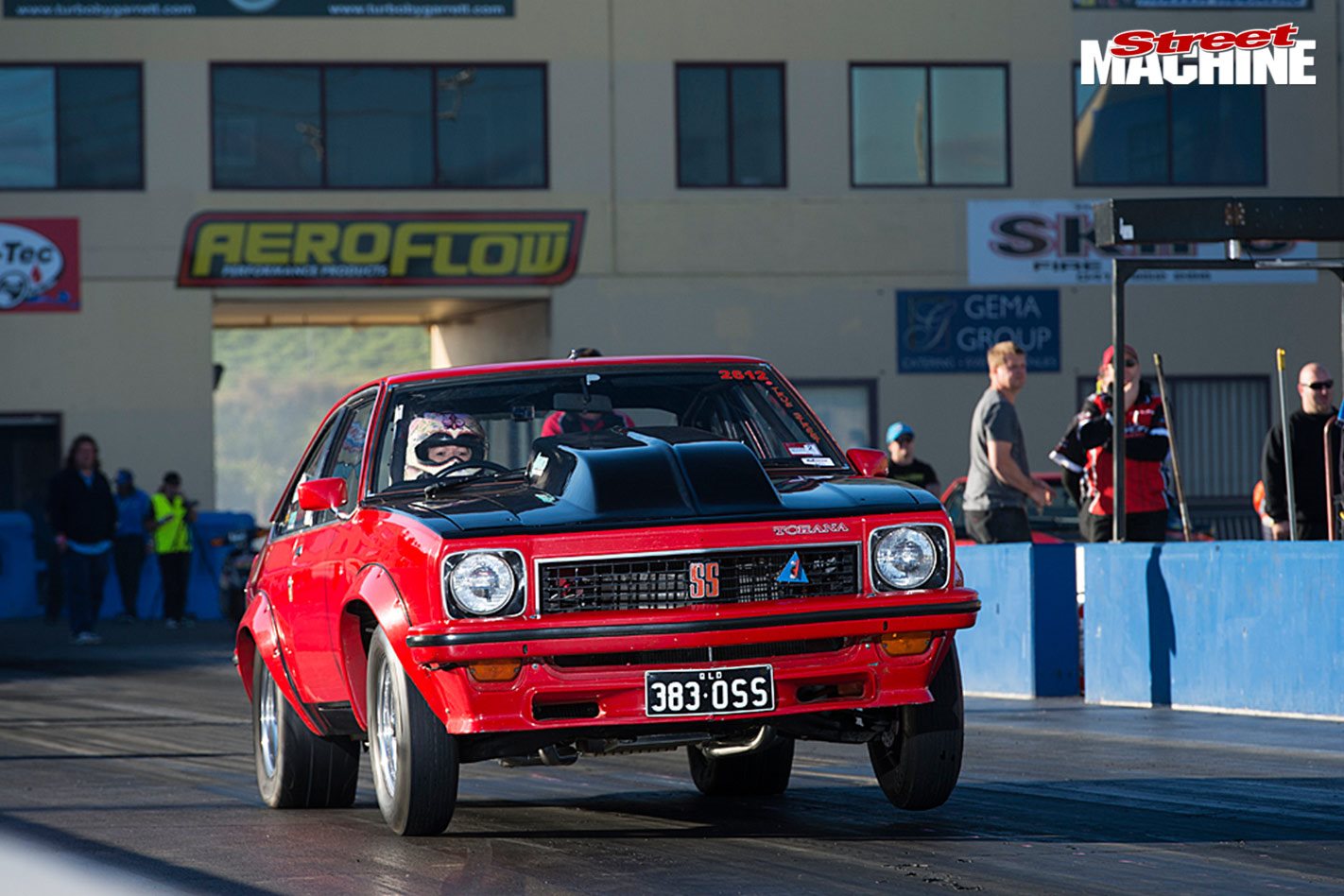 Colin bought the Torana as a roller a few years earlier. “It was all stripped out, and it had been like that for years,” Janelle says. “We brought it home, and the next night Col and his brother-in-law worked all through the night – with the help of few rums – to put a 383 and a gearbox in, and they were out skidding it the next night. So that became our play car, and that was the start of it all.” 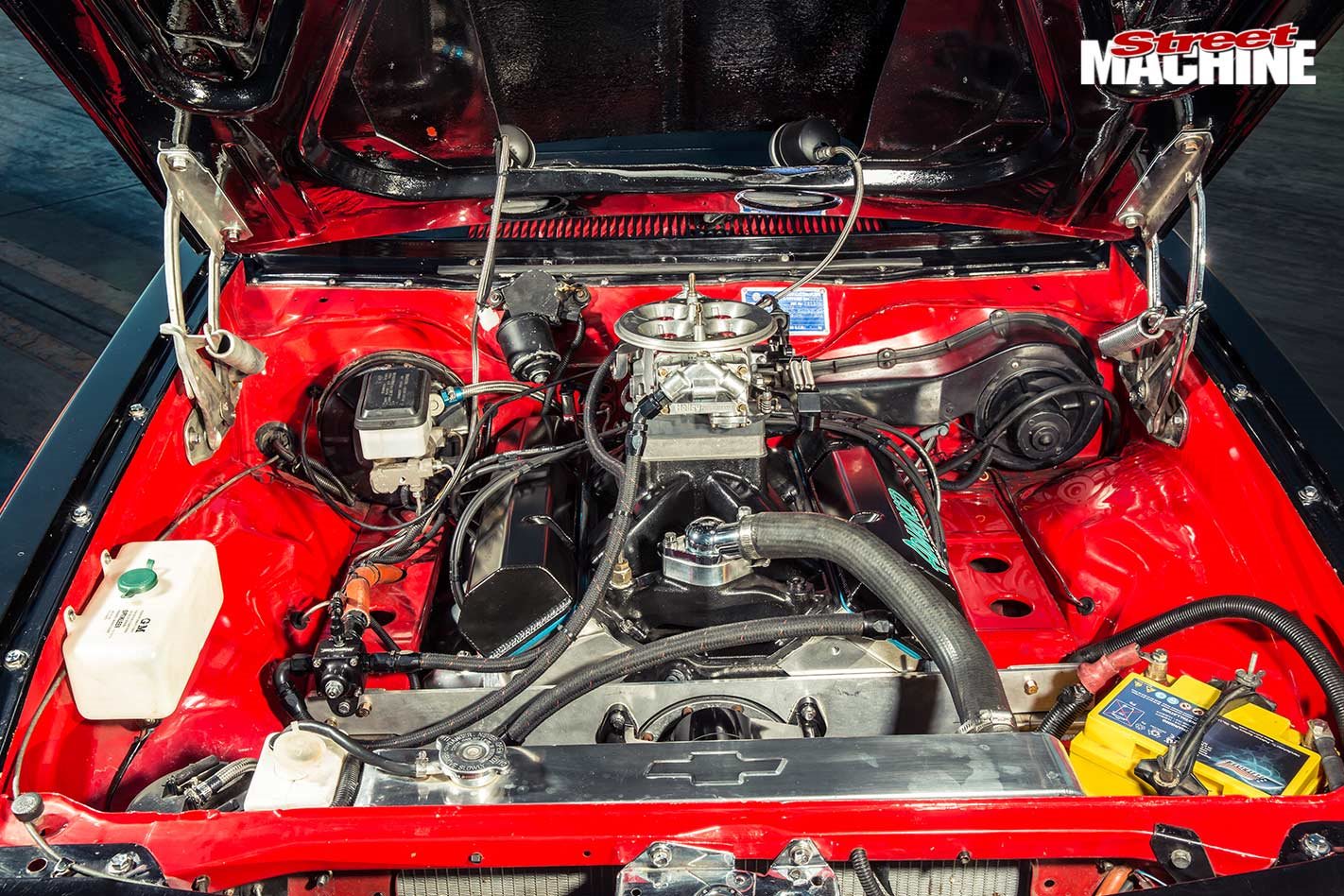 The stout 383 quickly pushed the hatch to 10sec timeslips and then the Pro Street bug bit hard. But then Col trashed the engine racing at Powercruise and they decided to step things up a notch.

“That was the first time the car ever missed a beat,” Janelle says. “So we had Gerry Cooper from Advanced Engine Performance build our new 417.” 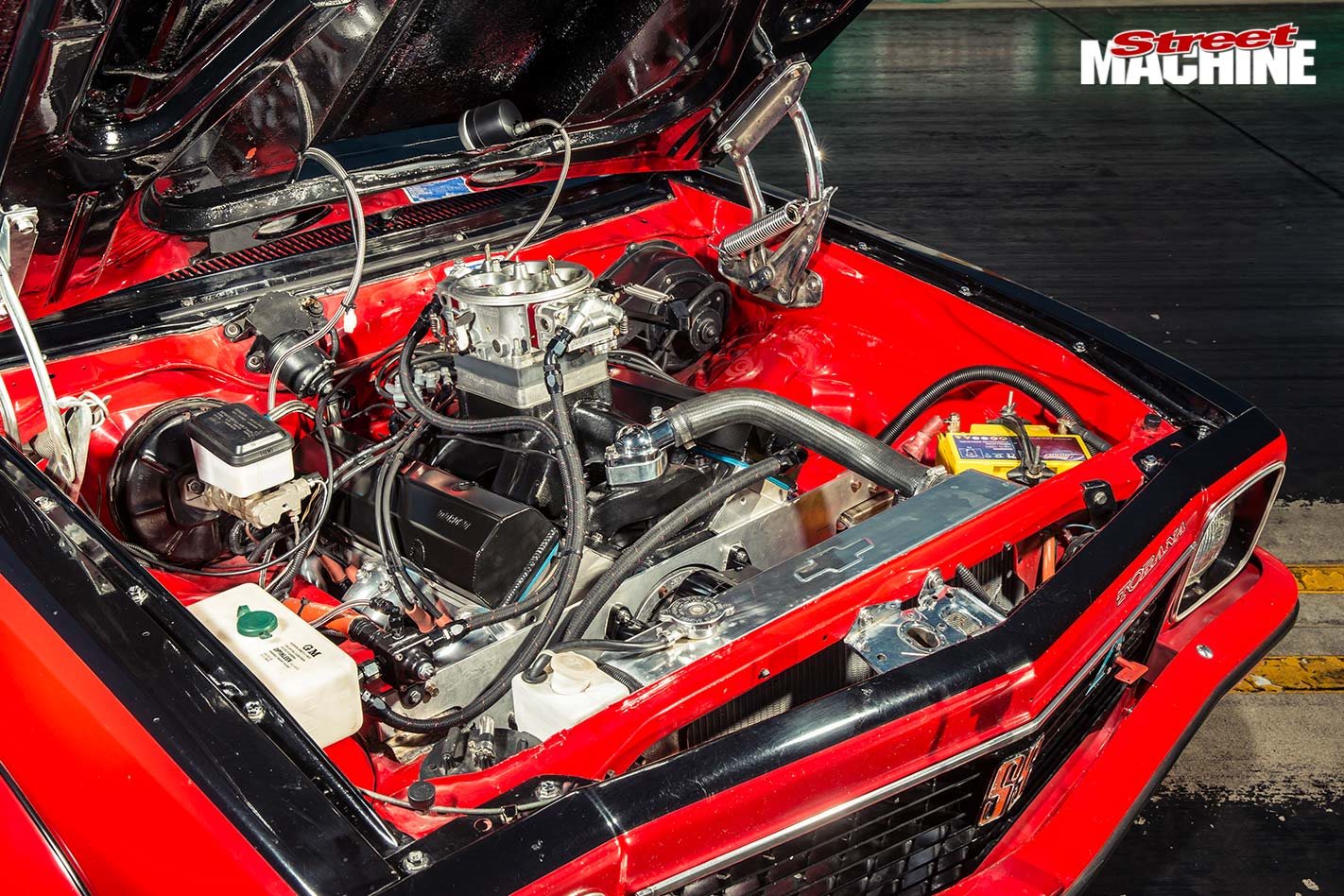 More cubes, better parts, more power. The 417 cuber really livened things up and pushed the Torana to new heights (or maybe that should be new lows) with a best of 9.48@141.62mph, and that’s pretty damn quick for a naturally-aspirated streeter. But when that drag racing bug bites, there’s no cure and so they decided to shelve the 417 cuber and go even faster with another combo.

So if mid-nines was blisteringly fast, then dipping into the eights is supercar territory, except this tough Torana will leave a Bugatti Veyron choking on its dust. 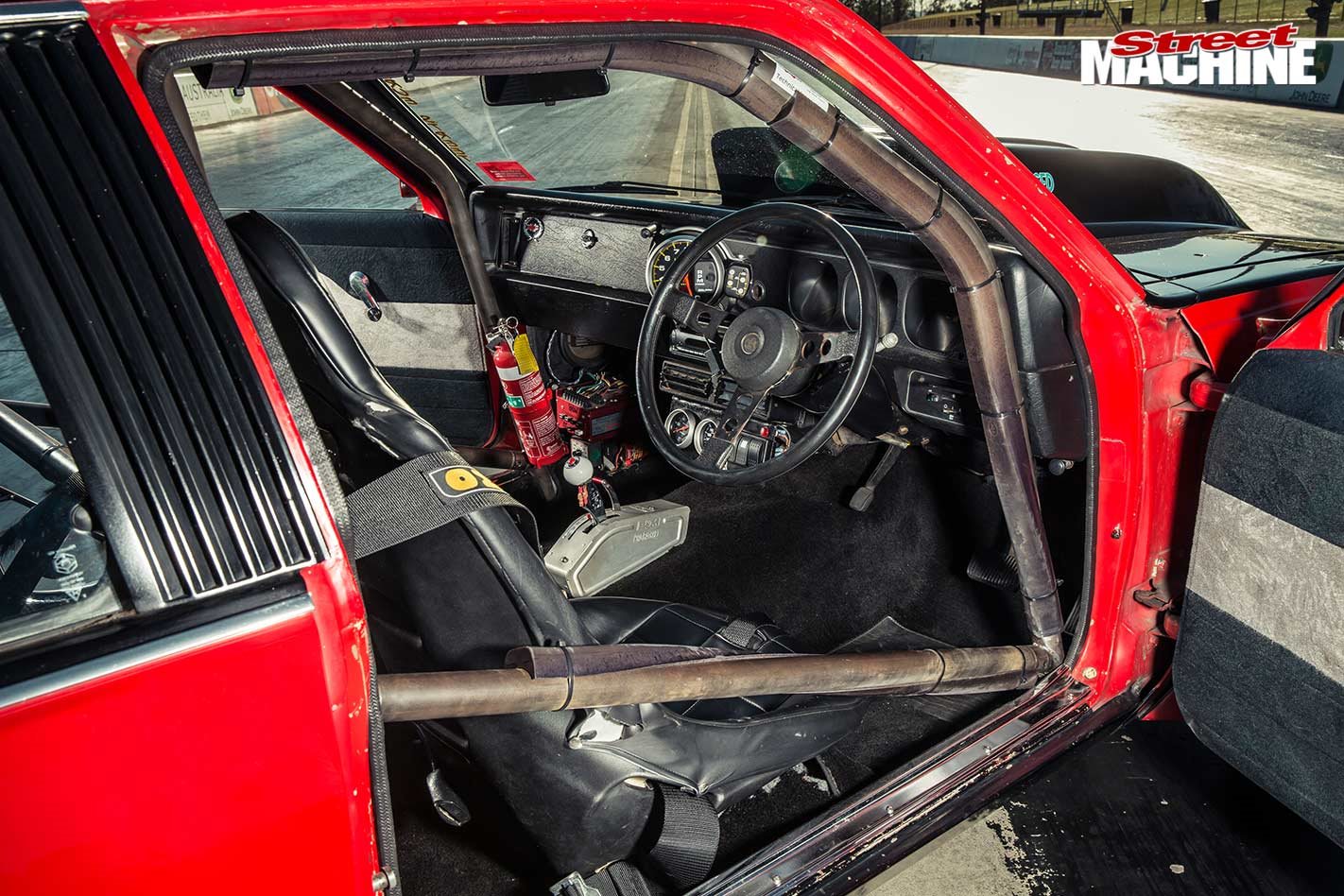 This isn’t some stripped out monster. There’re lightweight racing buckets for the strip and SAAS seats for the street. The rest of the trim is all there along with a full cage to make it 8sec strip legal

Colin and Janelle don’t want to give away all their secrets, but the 420 cuber started life as a Dart Little-M block which they’ve filled with top shelf gear from CP, Callies and Oliver to produce somewhere around 800 horses. Backing up that massive herd, there’s a transbraked Turbo 350 with a 5000rpm converter and tough-as-nails nine-inch.

With just three years of racing under her belt, Janelle has had a learning curve so steep that Sir Edmund Hillary (Google that one, kids) would have tried to scale it if he was still around, but she reckons she’s enjoyed every minute. 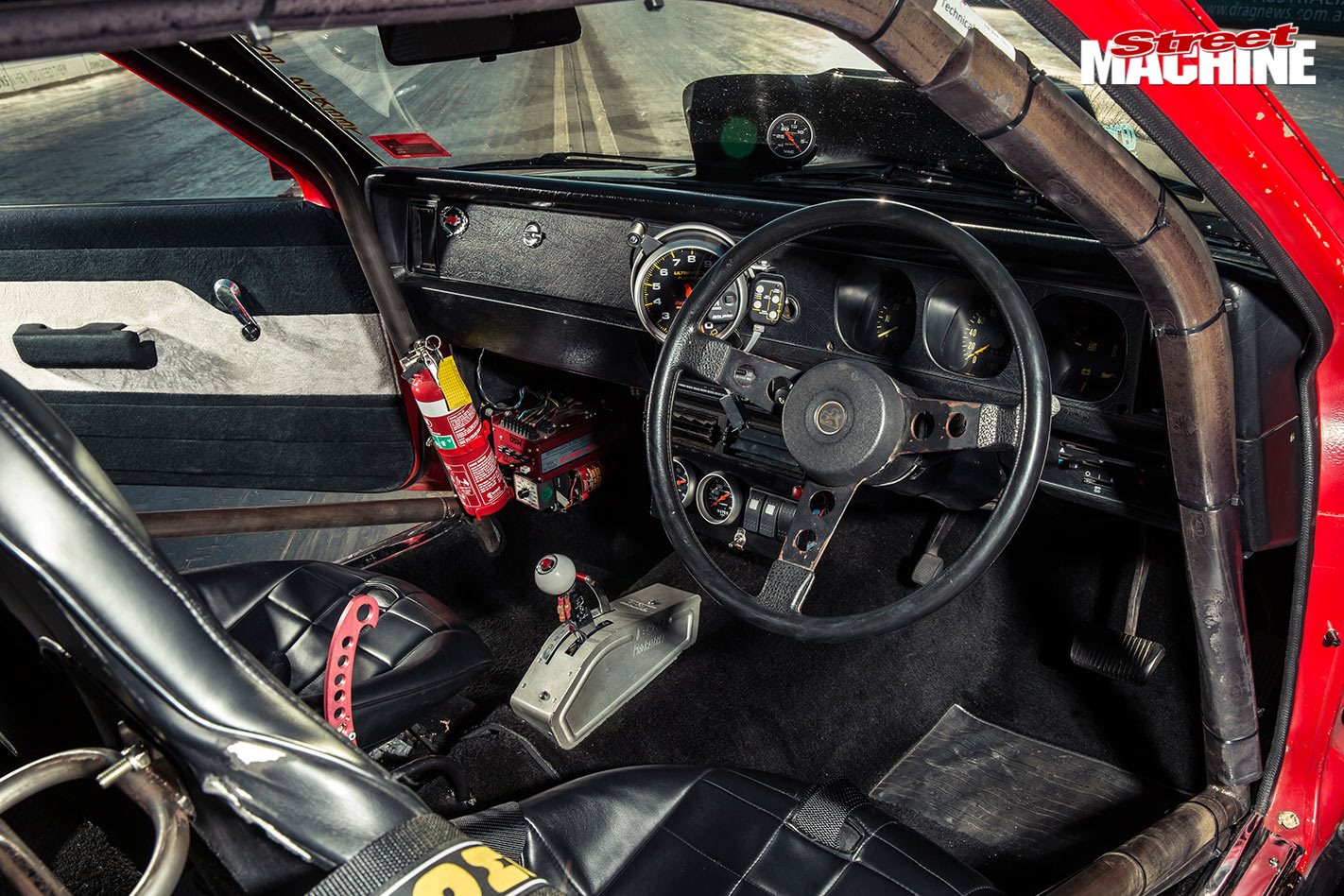 “With the children gone it’s been great,” she reckons. “It’s given me something to grab on to. I had a dream and something I really wanted to work for, but it’s been hard too. It has not been easy going. I’m quick again now, but I was behind them all for a while. It’s heads-up racing and anything can happen.”

With one meeting left in the 2013 series, Janelle has sewn up her third title, which had us wondering if we would see Colin behind the wheel soon?
“No, he never really wanted to race,” Janelle reckons. “After I took the first championship, I wanted him to get licensed because I thought it was his turn, but he had no inclination to do it whatsoever.” 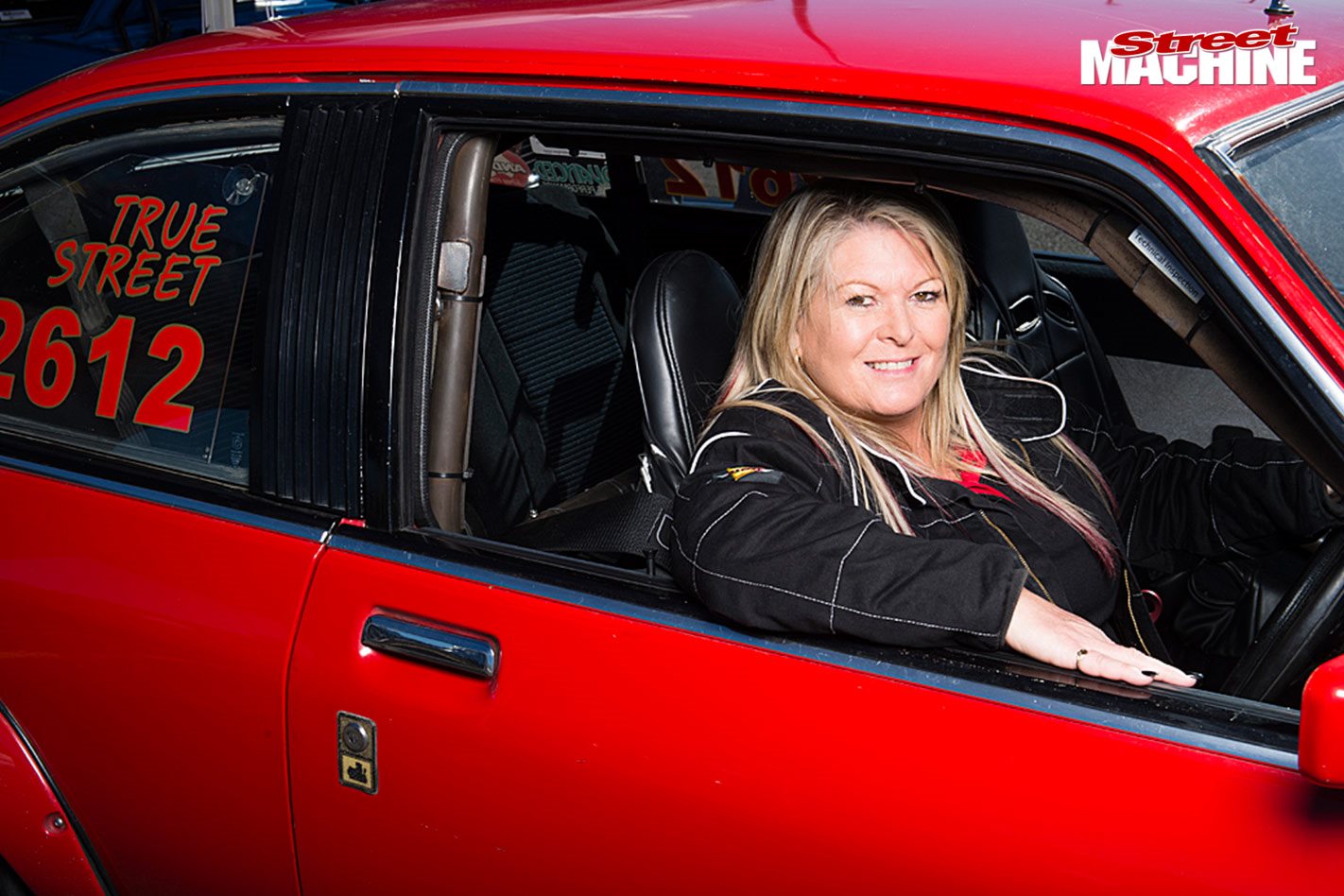 The sad news is Janelle probably won’t be contesting next season, a decision that was not made lightly.

“Look, I love True Street,” Janelle says, “If I die tomorrow I’ll die happy because I’ve achieved what I wanted to achieve with True Street. But this will probably be my last year of racing because without a sponsor we just can’t financially do it. I’ll still do events at Willowbank, we’ll come out to play when it comes to the shootouts and that, but we just can’t afford to do the full series anymore.”

THANKS
Janelle would like to thank her husband Colin, Brett Reilly, Gerry Cooper from Advanced Engine Performance and the huge APSA family