SUMMERNATS being what it is, there are always plenty of cars causing a stir. All weekend conversations will start with: “Have you seen … ?” Usually the car in question is on show in the Elite Hall, surrounded by lights, mirrors and admiring fans. 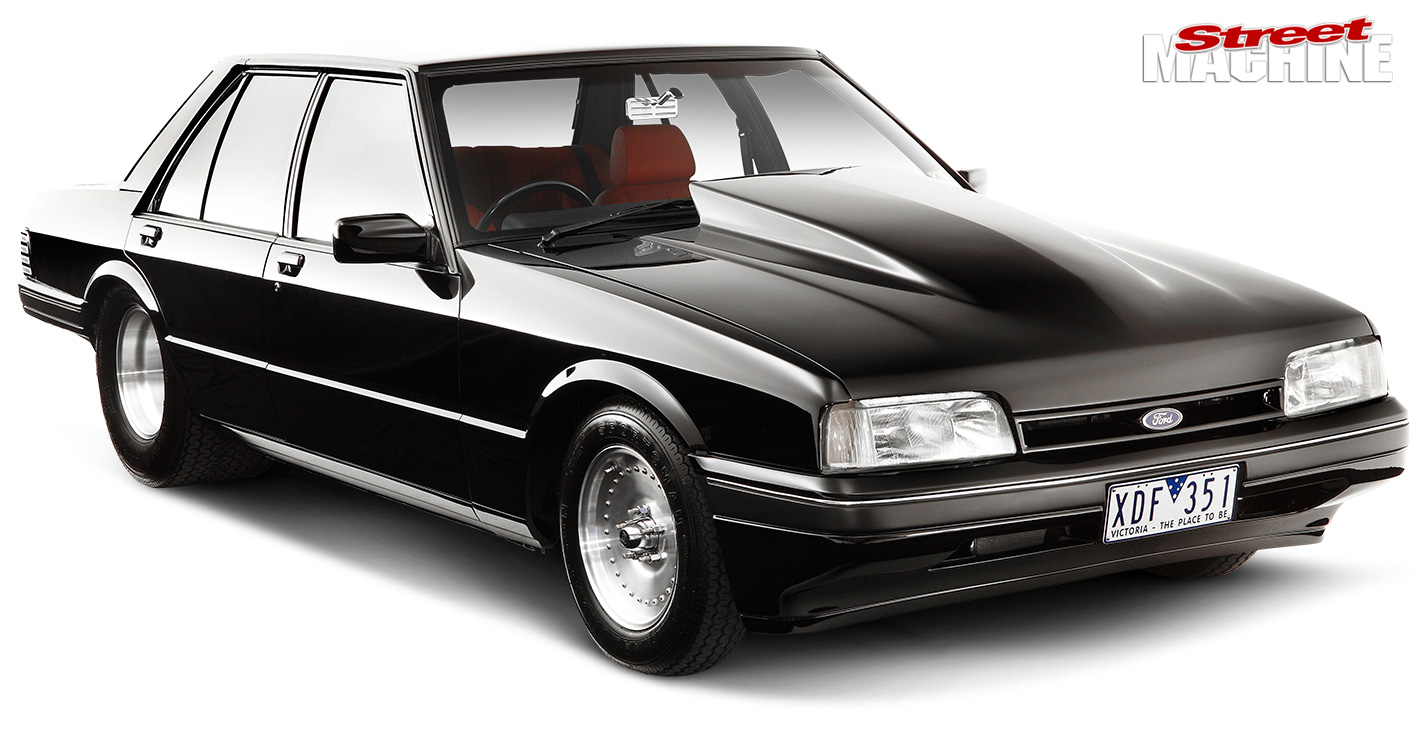 But at Summernats 25 the car that had everyone talking was Emanuel Darmanin’s XF Falcon — well, it’s an XD but few realised — and it wasn’t sitting still. 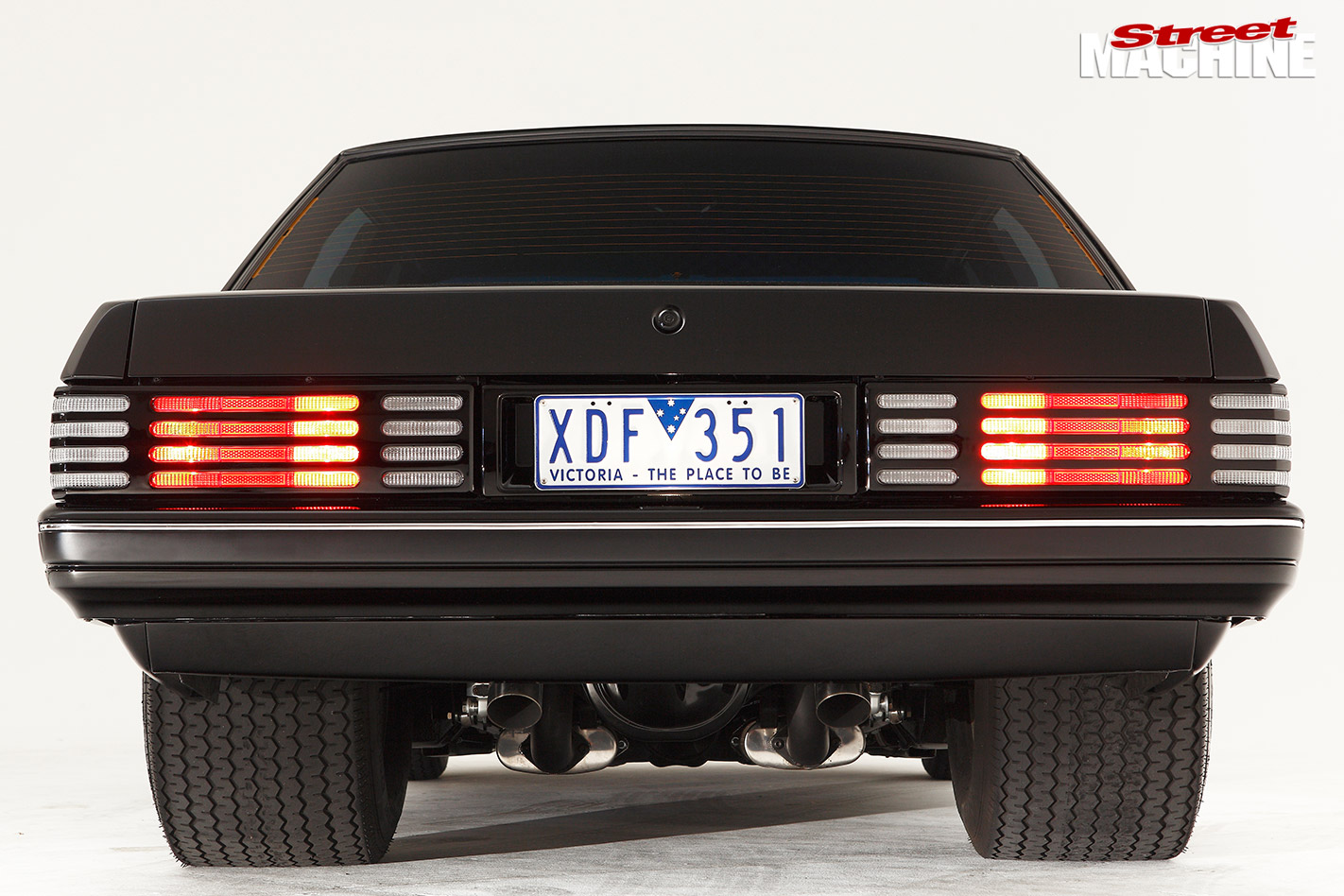 The quality of the build was simply superb, from the flawless black paint through to the red leather trim and that chunky tubbed rear end. 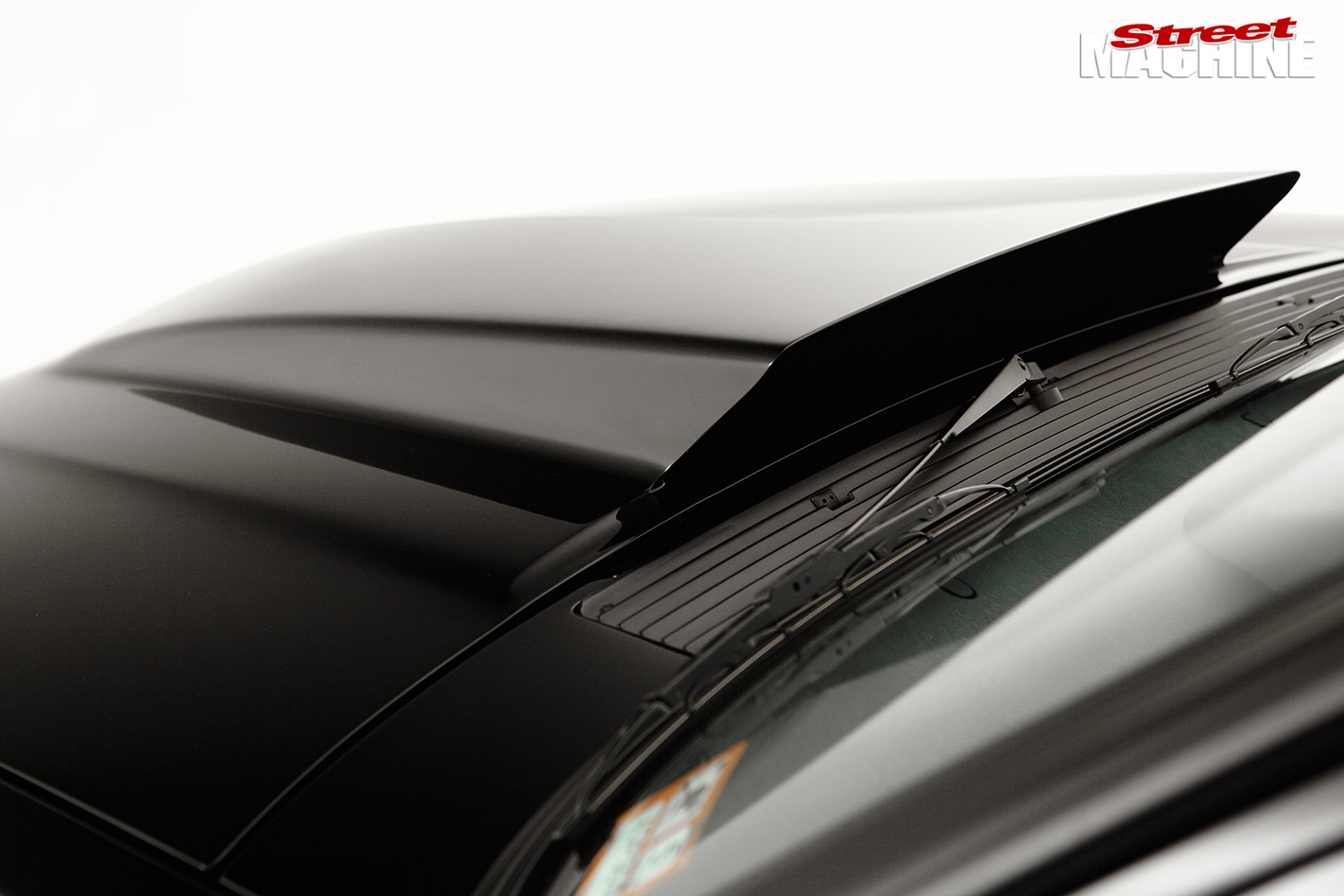 Modestly, Emanuel knew he had a nice ride but he wasn’t quite prepared for the response.

“It was a spinout, the feedback I got for the car,” he says. 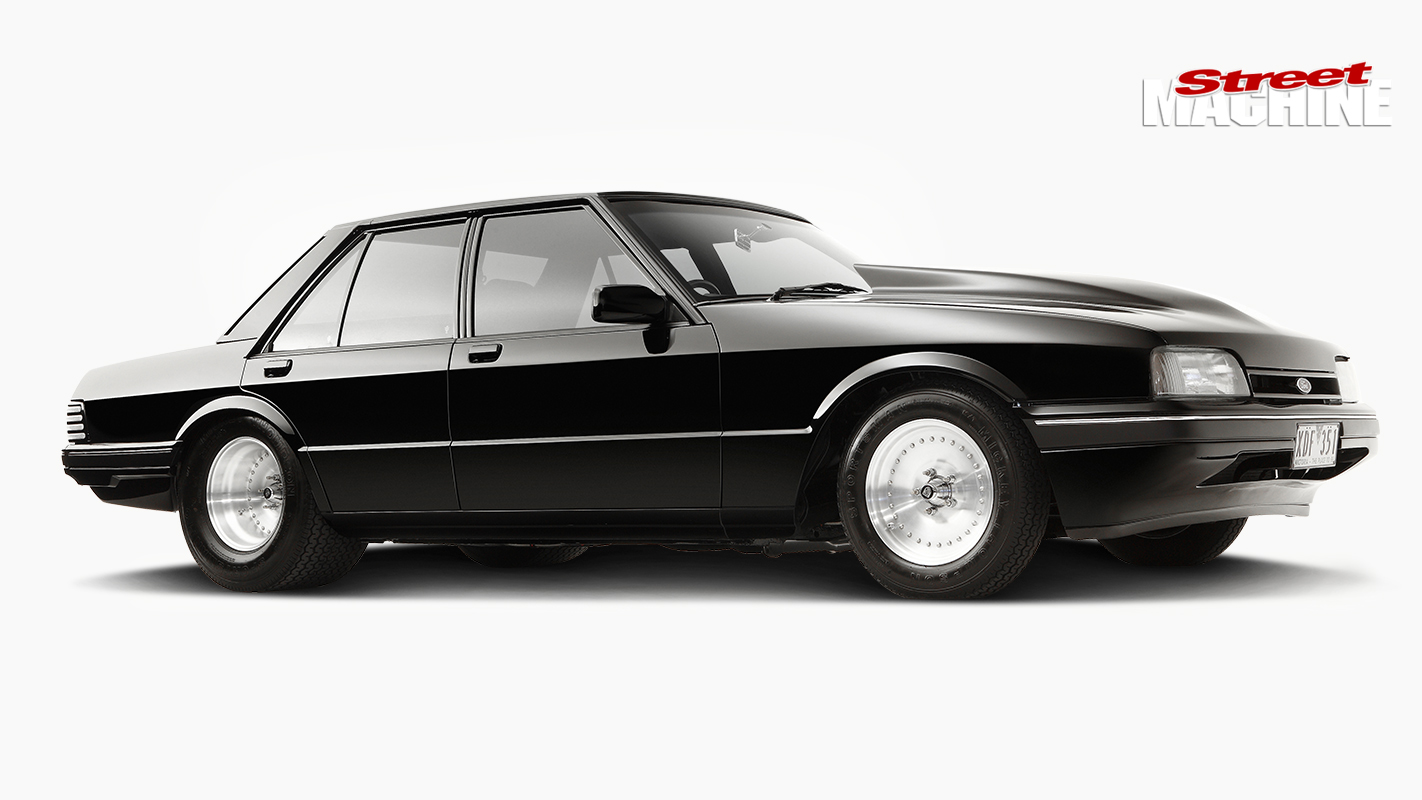 The old-school stance looks right and legal. At the back the 12 1/2 in Center Lines wear 15 1/2 inches of M/T Sportsman rubber

And it wasn’t just the Ford fans who loved it; the judges praised the XD, rewarding it with a raft of awards, including a place in the prestigious PPG Supreme line-up where the best from across the Summernats classes meet. Indeed, the only problem the judges had was deciding which class it should contest. Emanuel made the final decision: “When I got there they wanted me in Elite but I left it in Street.” 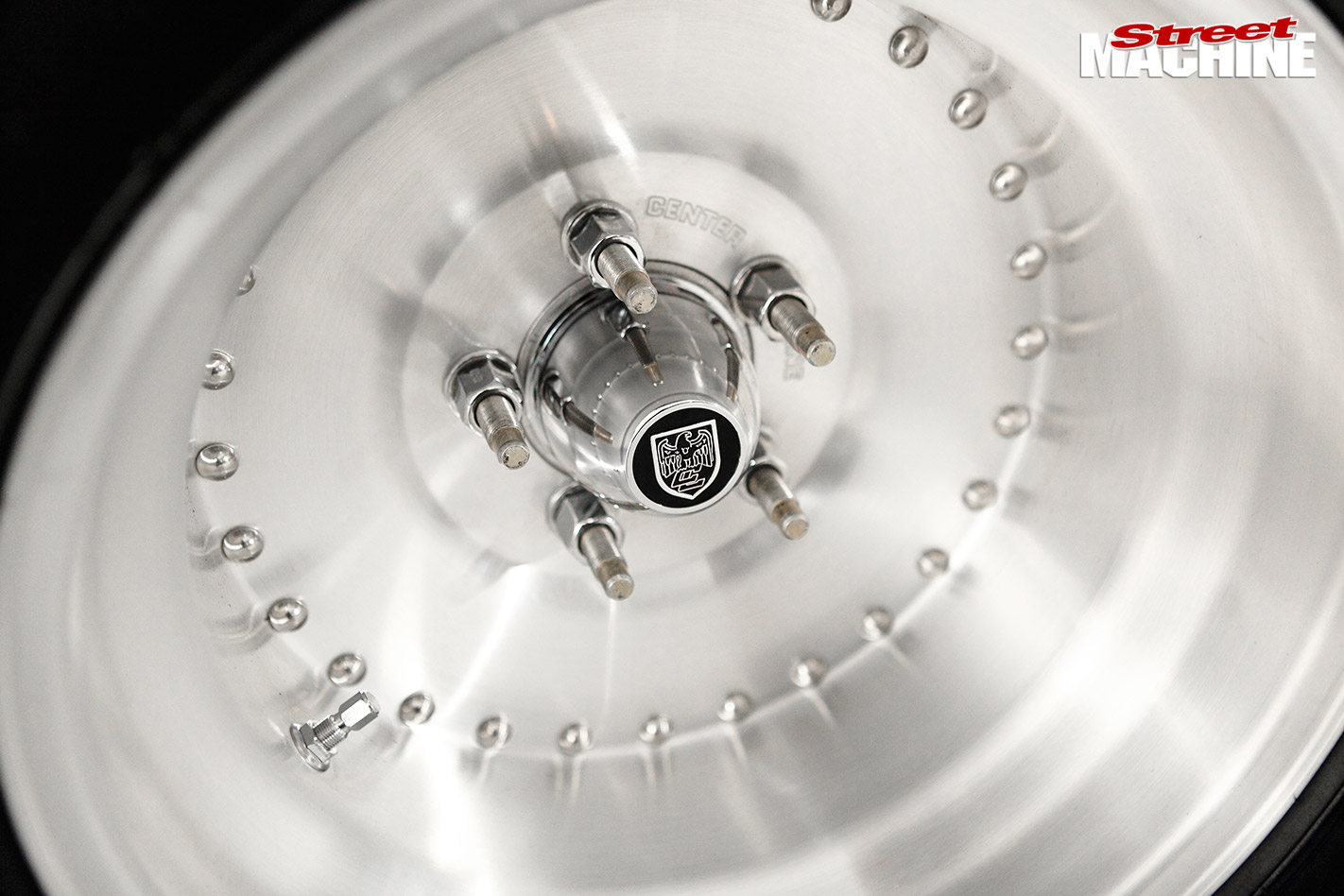 His reason? It’s a street car, and he’s covered the miles to prove it. “I’ve done around 1400km in three months. I drove it around heaps before Summernats just to see that it was right and every night in Canberra we cruised. 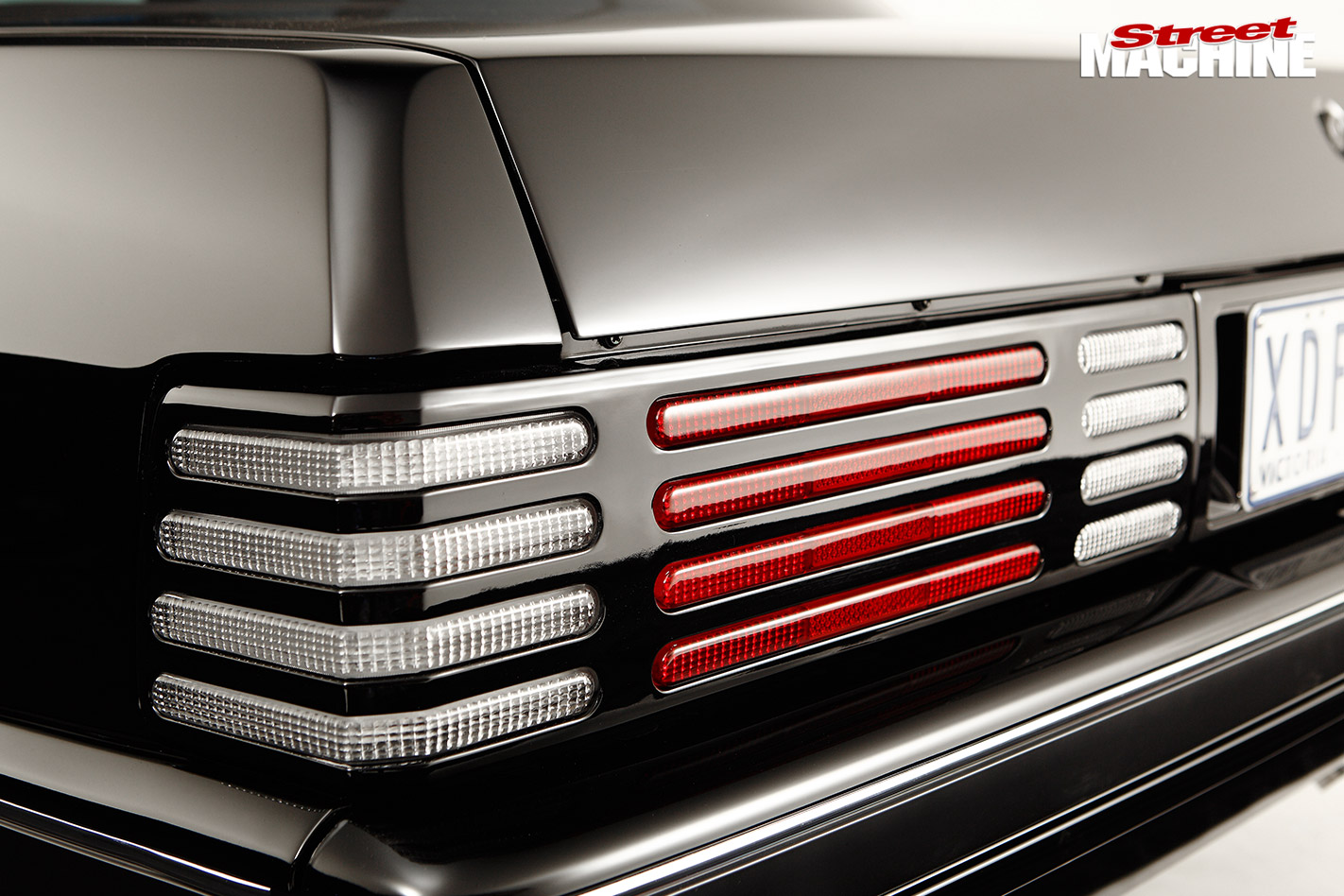 “I don’t know if it’s because of the four-link or whatever but it drives as well as a modern Falcon.”

It’s taken Emanuel five years to piece this super-smooth Pro Street machine together and in his more honest moments he admits that bugs the shit out of him: “I lost 18 months because panelbeaters wouldn’t touch it.” 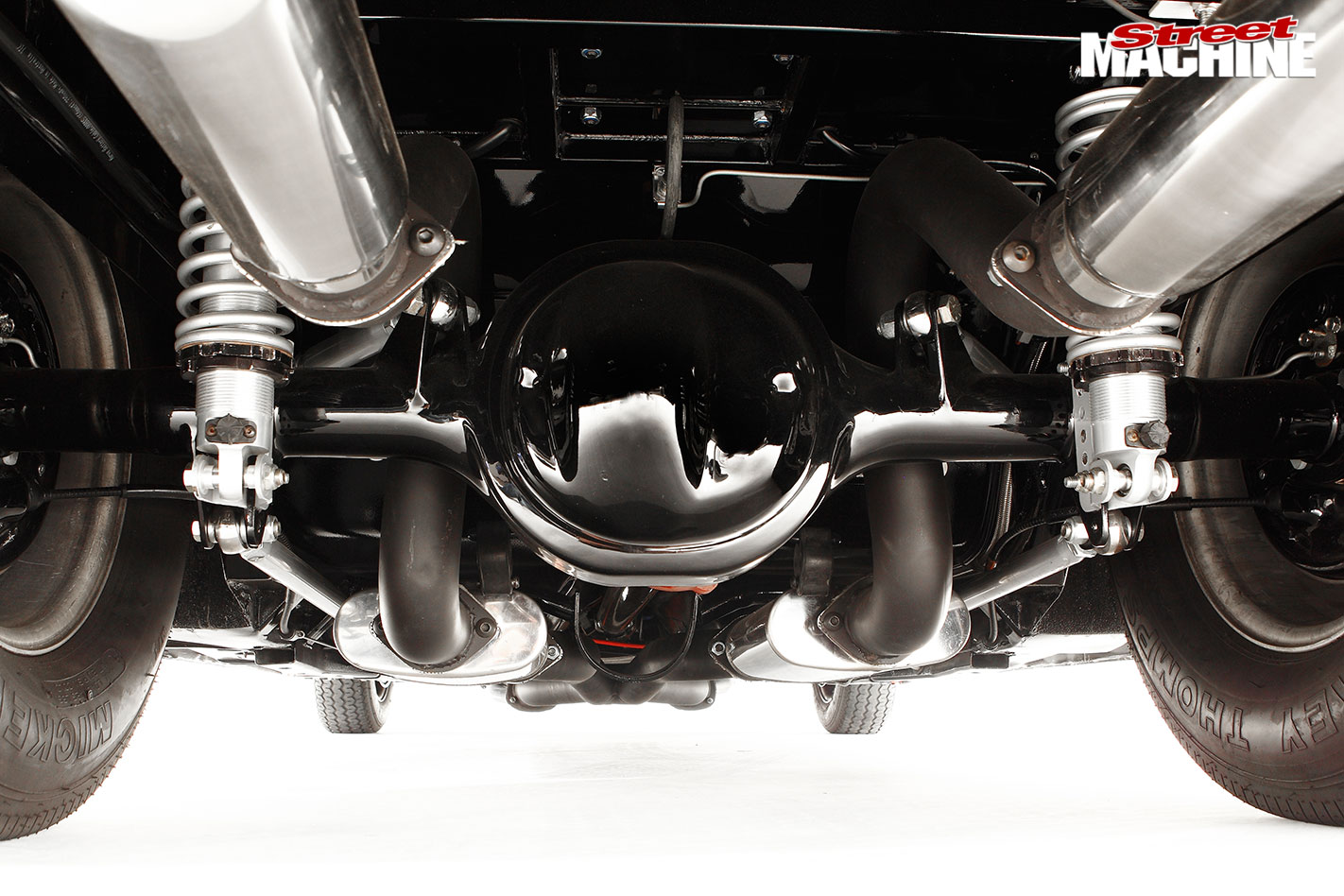 The four-link was built by John Lang at pro9.com.au; Emanuel build the tubs. The 31-spline nine-inch runs 4.3 gears

That wasn’t because they were all anti-Ford — there was a good reason they didn’t fancy the job.

“My son found the car on the internet. I like the body shape; I like sharp lines and I actually prefer XE fronts but I don’t like the bumpers. That’s why I went with the XF front — plus I was able to get new guards,” he explains. 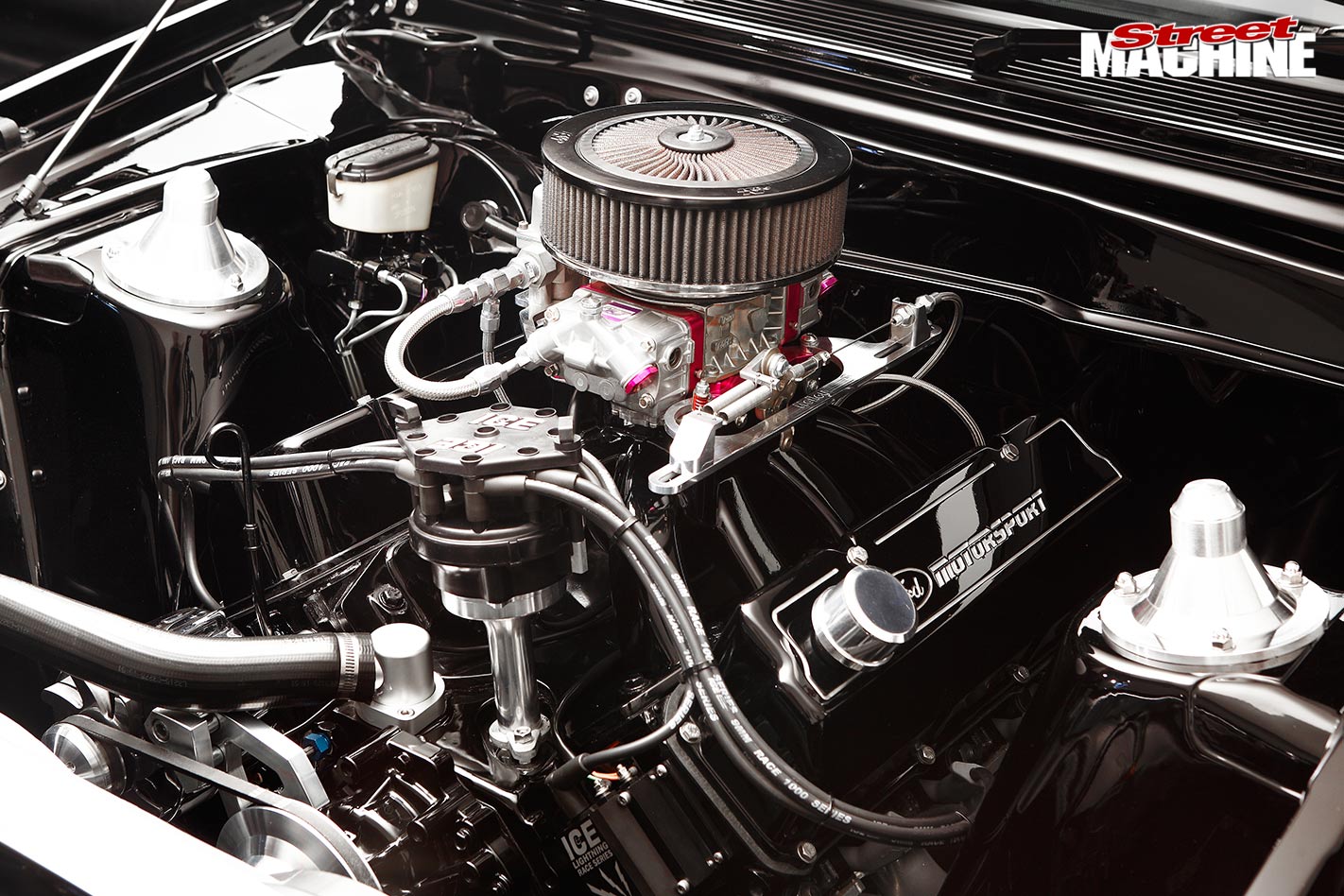 Black and billet is the theme under the Alfa Fibreglass reverse-cowl scoop. Emanuel chose to stay with standard cubes and cast-iron 4V heads — it’s a proven 10-second combination

He sourced the fresh metal at a body shop that used to specialise in taxi repairs and while he was at it he nabbed new front door skins and a rear door as well. With so much new metal on hand, he thought things were looking good. But then he choose the wrong panel shop. 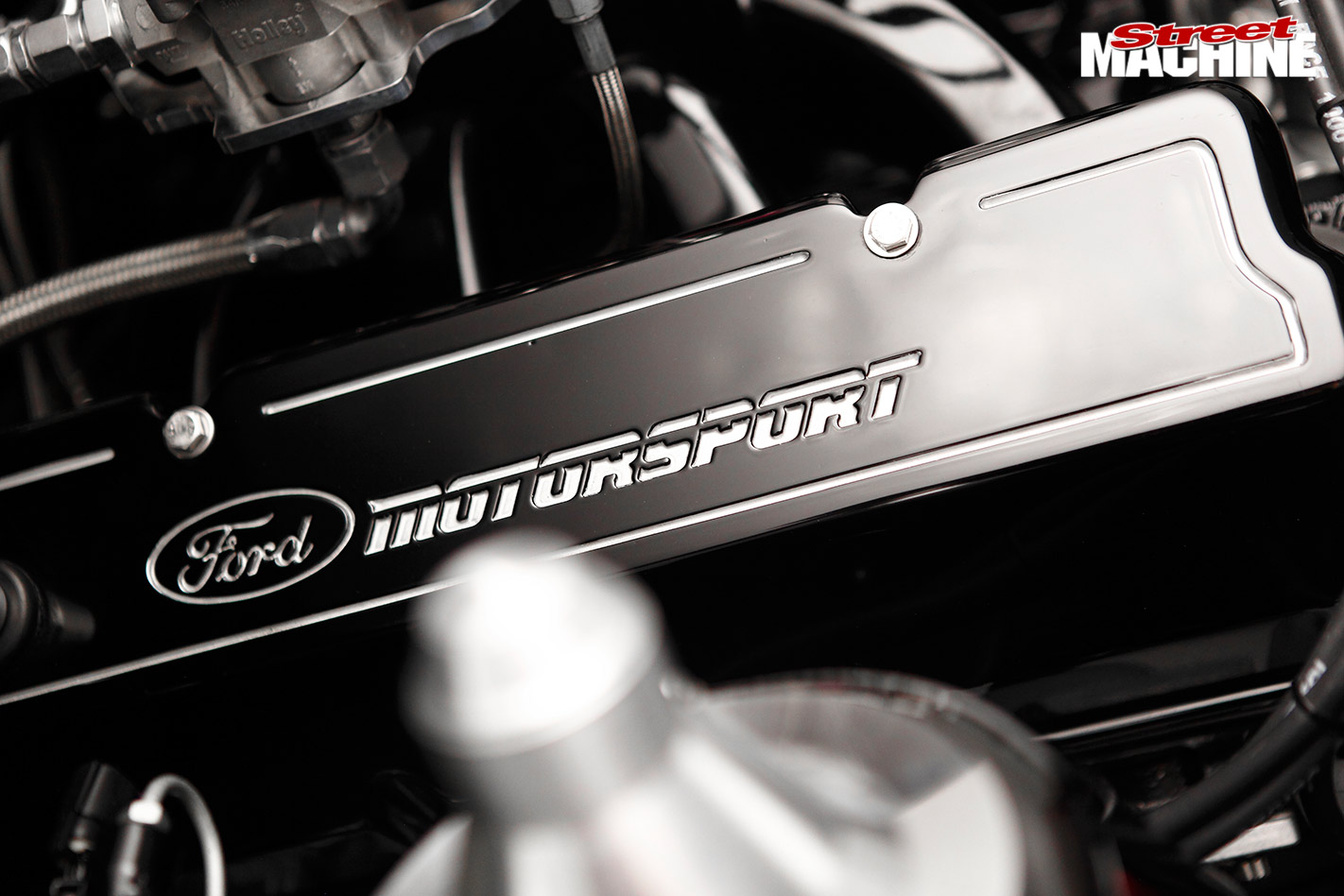 “They stuffed the paint, and when they stripped the paint they warped the panels. No-one would touch it then, so I had to do it myself.

“I had a little bit of experience but not a great deal. To line up those lines, that was a killer.” 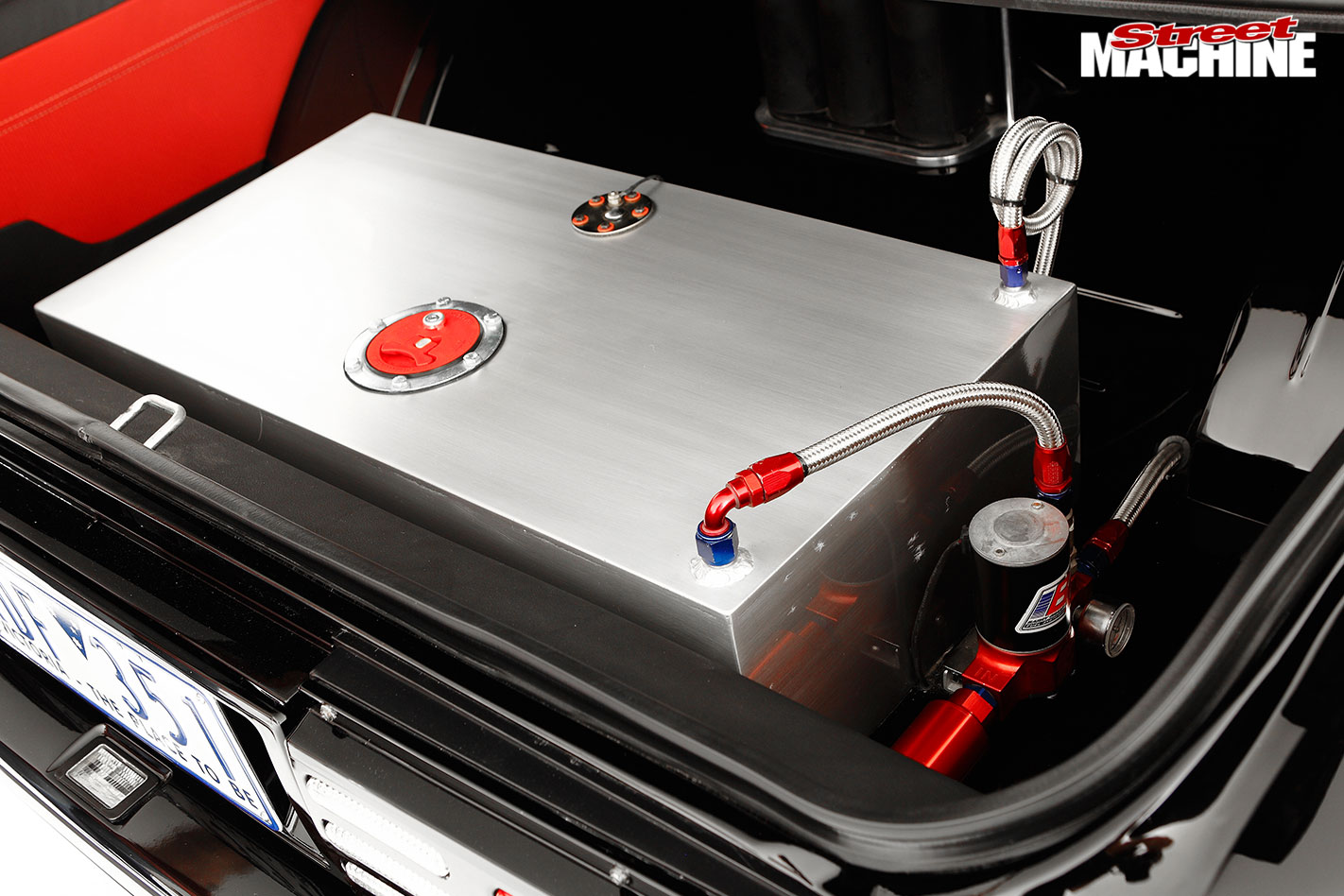 So the next 12 months were spent in the shed repairing the damage and bringing the sheet-metal up to scratch. Emanuel had already decided it was going to be PPG Jet Black and that meant the body needed to be straighter than a born-again Puritan. 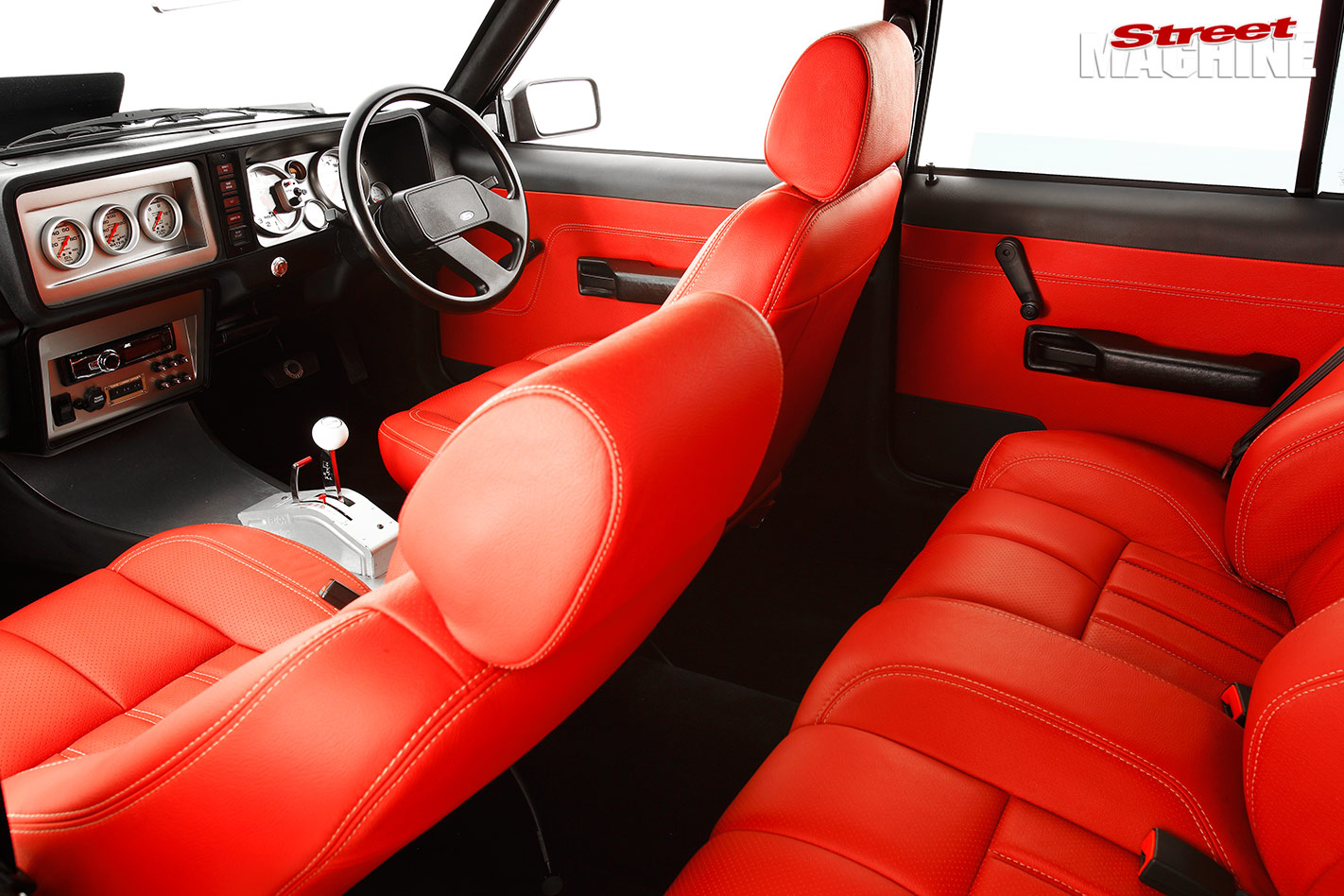 The car came fitted with an XF dash, which Emanuel filled with Auto Meters. The asymmetric XE ESP tiller is a cool 80s touch

Once he was done, he submitted his homework to the professionals at Rapid Smash Repairs. They assessed his efforts and announced it was up to scratch, then high-filled the body and coated it in that luscious black. The paint has amazing depth, with a dark fluid nature about it. When it comes to black paint, this car is a masterpiece — it’s like peering into a pool of dark, still water.

After wearing his fingers to the bone on the body, the good news was that Emanuel already had an engine. 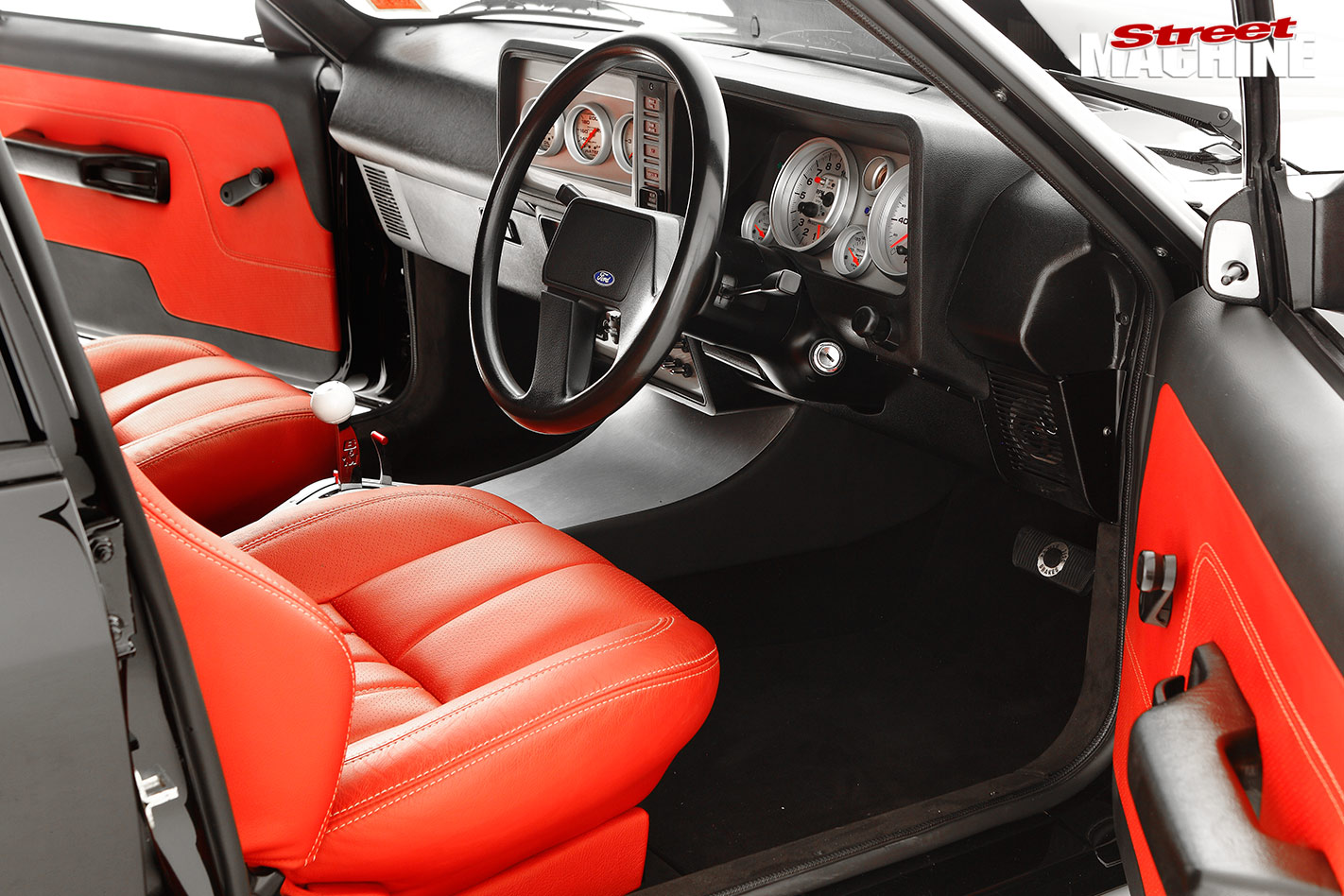 “I bought the car intending to put my running gear in it, then drive it to Calder to race with my kids,” he says. His 351 Clevo was no taxi motor; it produced enough grunt to fire an XW sedan down the quarter in a touch under 11 seconds.

“On the dyno a decade ago it made 540hp. Since then I’ve added a roller cam, intake tongues and ICE ignition so it should make a bit more.” 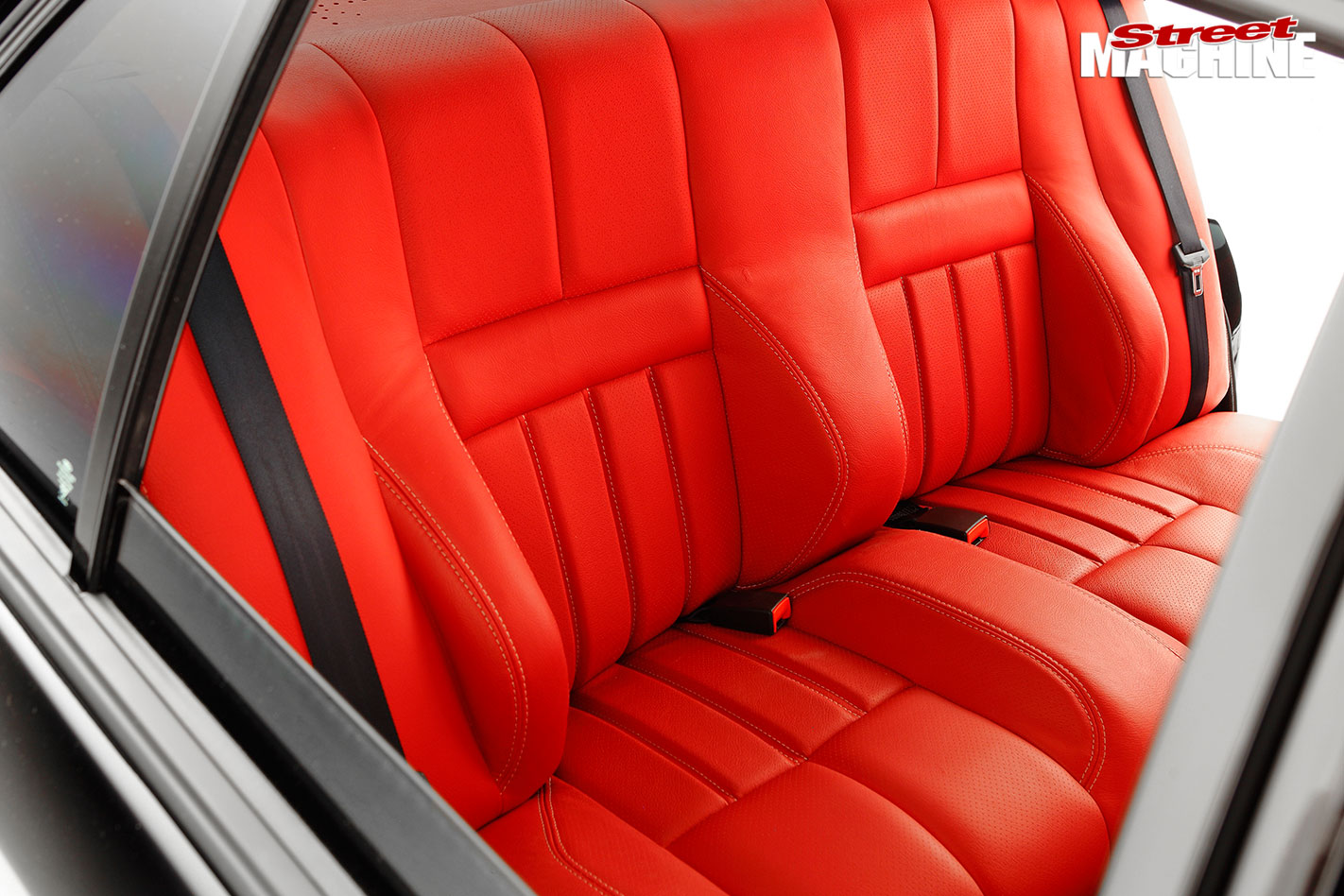 Red leather trim adds plenty of spice to the interior, with the back seats nicely bolstered for extra comfort. Not too much though — the air con and fast glass were pulled to save weight

He’s hoping to run high 10s with it in the XD and a pair of 15½in-wide Mickey Thompsons out the back mean lack of traction won’t be the reason if he doesn’t. They swing on a four-link rear built by John Lang at Pro9 — Emanuel did the tubs and sheet-metal himself. Classic Center Line wheels adorn each corner, with a pair of cheese-cutters up front to keep it pointed in the right direction. 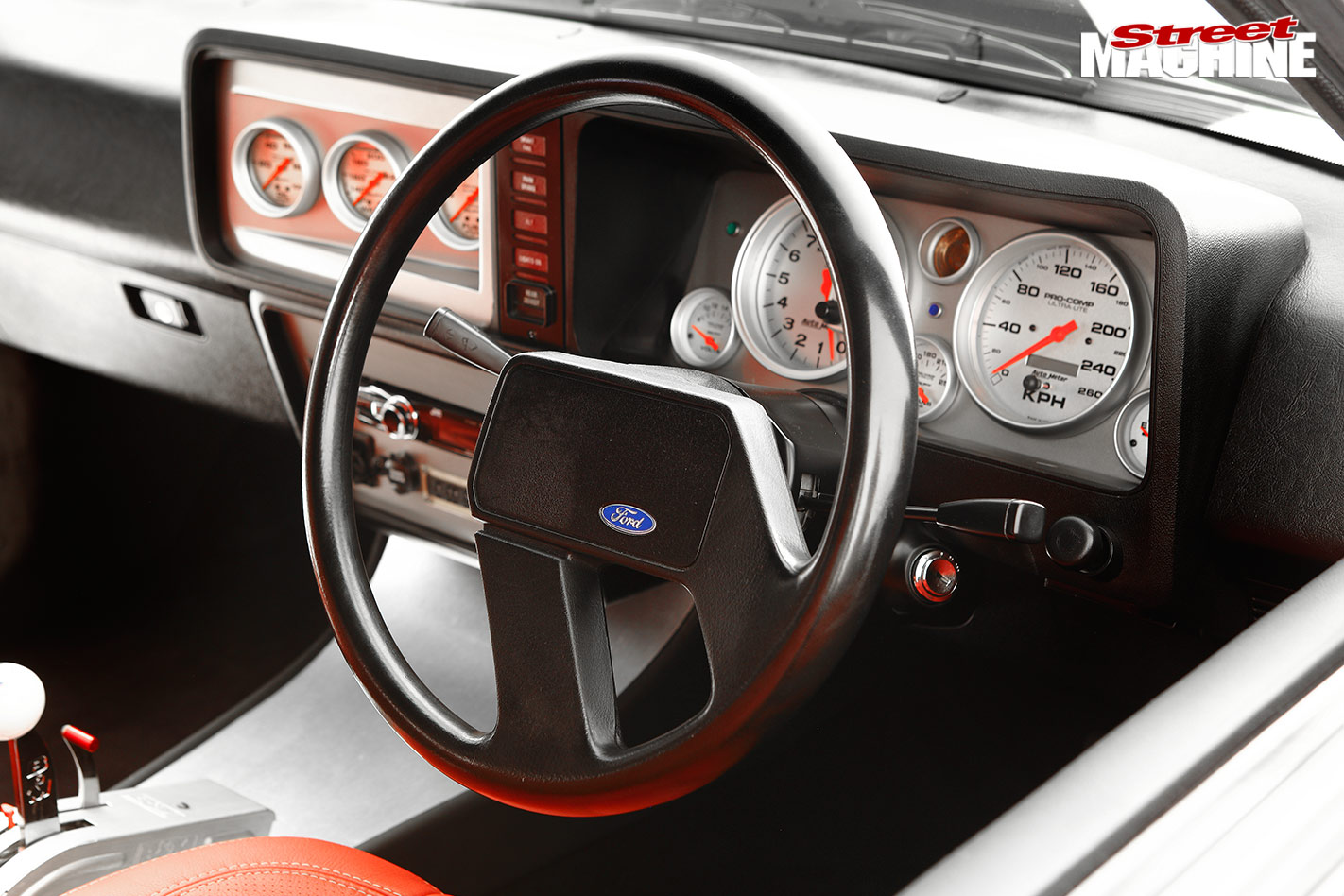 Inside, the contrasting bright red leather looks fantastic and the factory seats have been nipped and tucked to achieve the right look. The shell came with an XF dash already fitted but the gauges are all Auto Meter now. Perhaps strangely for a streeter, Emanuel removed the power windows and air conditioning — “I was building it to race,” he explains. 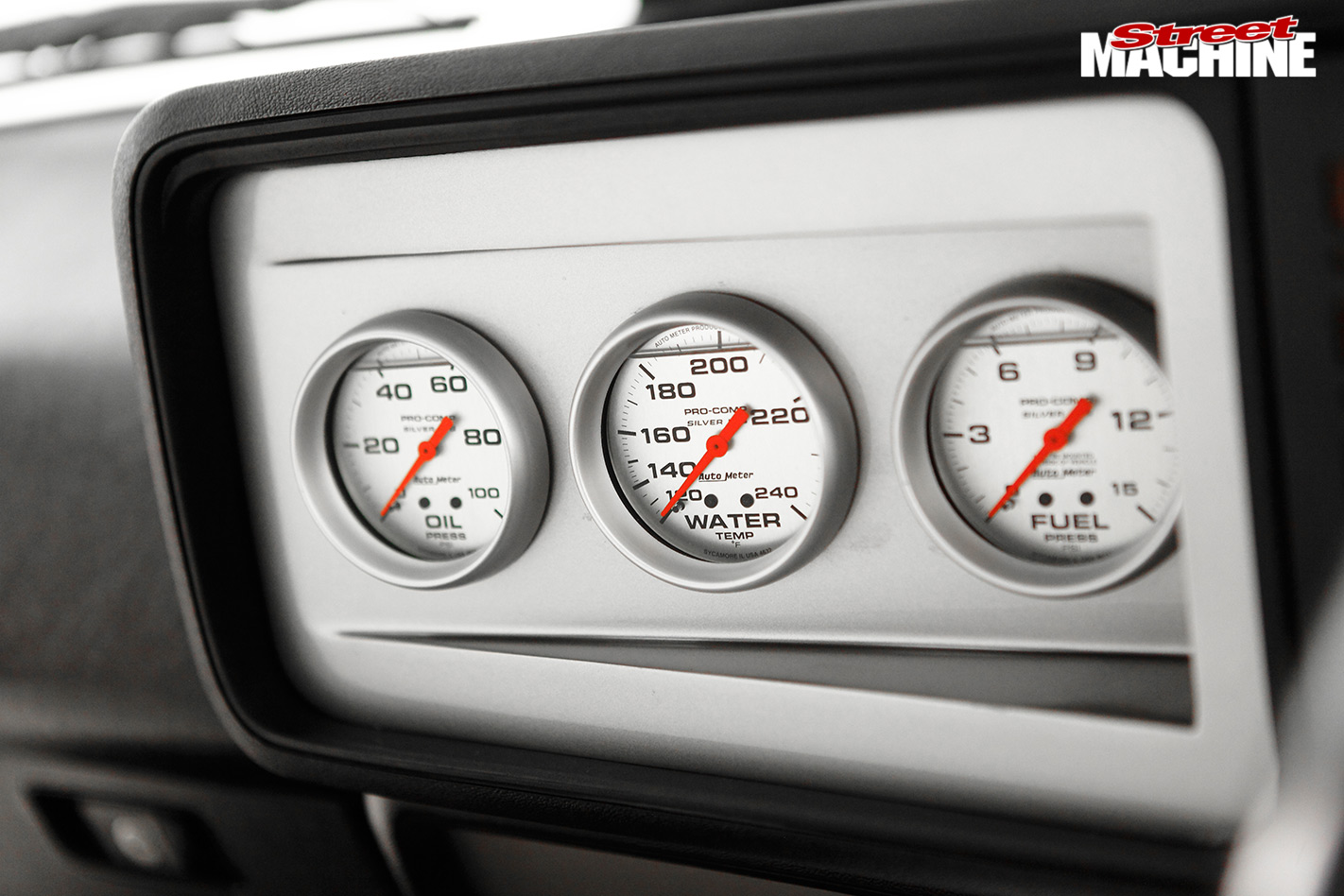 For the immediate future he has a few more shows he wants to compete in before he faces the Calder Park Christmas tree. But while the swag of trophies it’s hauled since its debut at Springnats last year has been fun, you can tell Emanuel is rapidly tiring of the static scene.

“I’ll take it to MotorEx and then I won’t show it — I’ll just enjoy it and race it!” 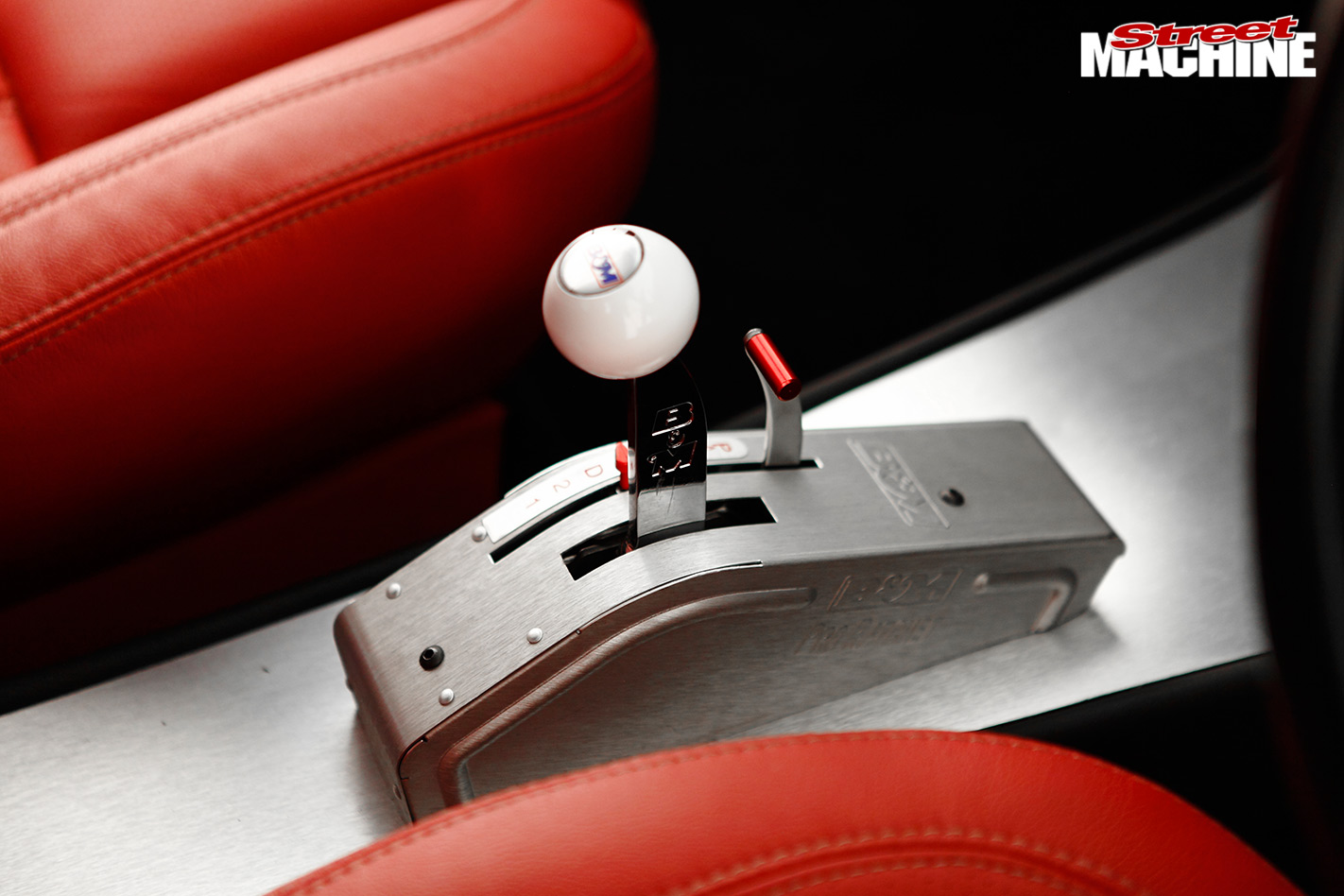