Jason Poustie wanted a Holden HK with monster power and fat tubs, but with all the grunt kept under-bonnet. Mission accomplished

IN A world of Convo Pros, reverse-cowl scoops and LS conversions, Jason Poustie’s HK Belmont ute is a breath of minty-fresh, Pyrmont Green air. Not only does it rock to ProCharged 383 Holden power, putting out 650hp at those fat rear treads, but all the mumbo is tucked neatly under the bonnet. 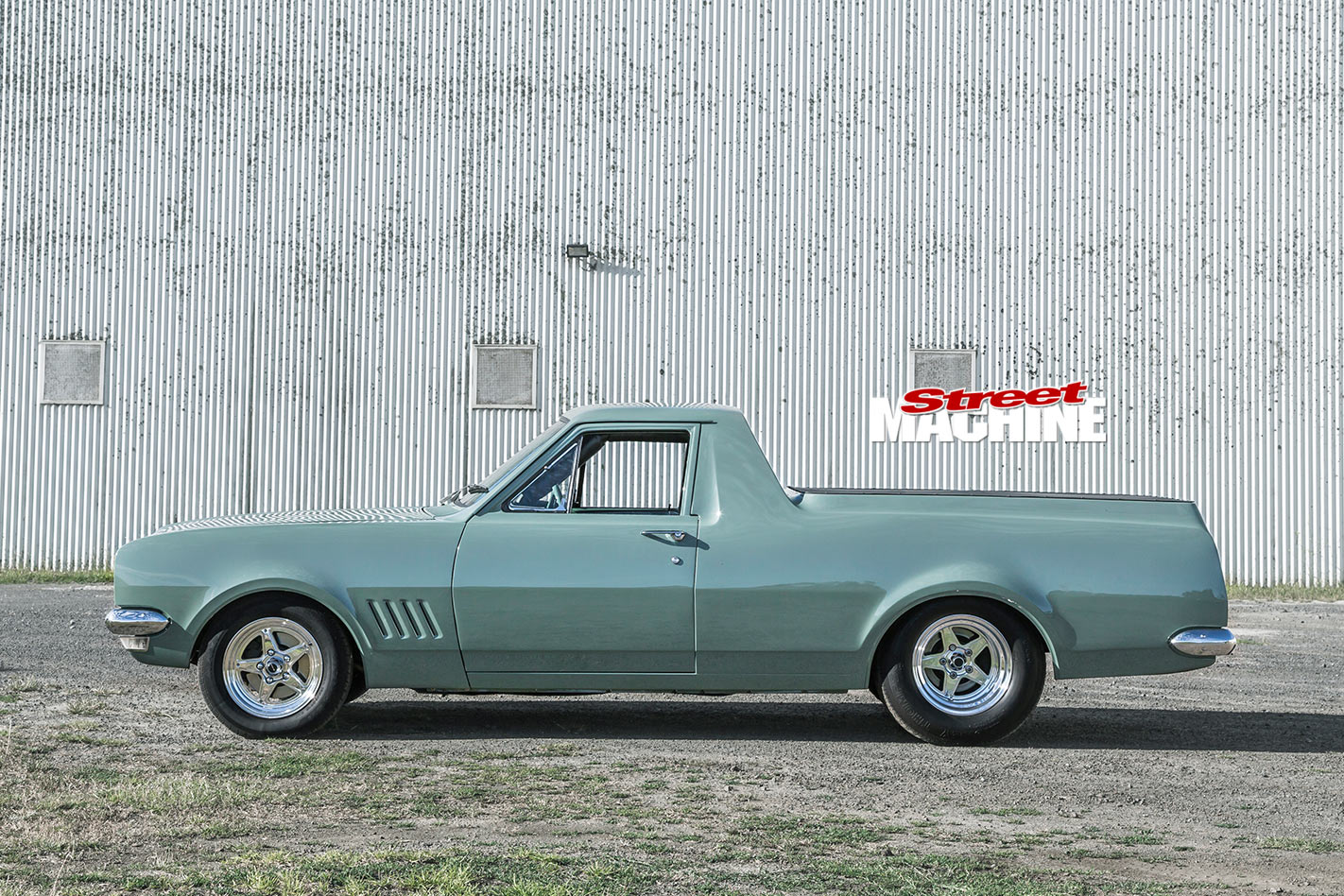 “I bought the ute in 2011 from an old dear who had advertised it in The Warrnambool Standard,” Jason says. “I think I gave her $1000 for it. I didn’t know that her late husband was a lawnmower man; the tub floor was all rotted out under the wood!”

Fortunately Jason is handy with a welder and gets loads of practice through running his own agricultural contracting business. He was able to replace the grass clippings and iron oxide with fresh metal. 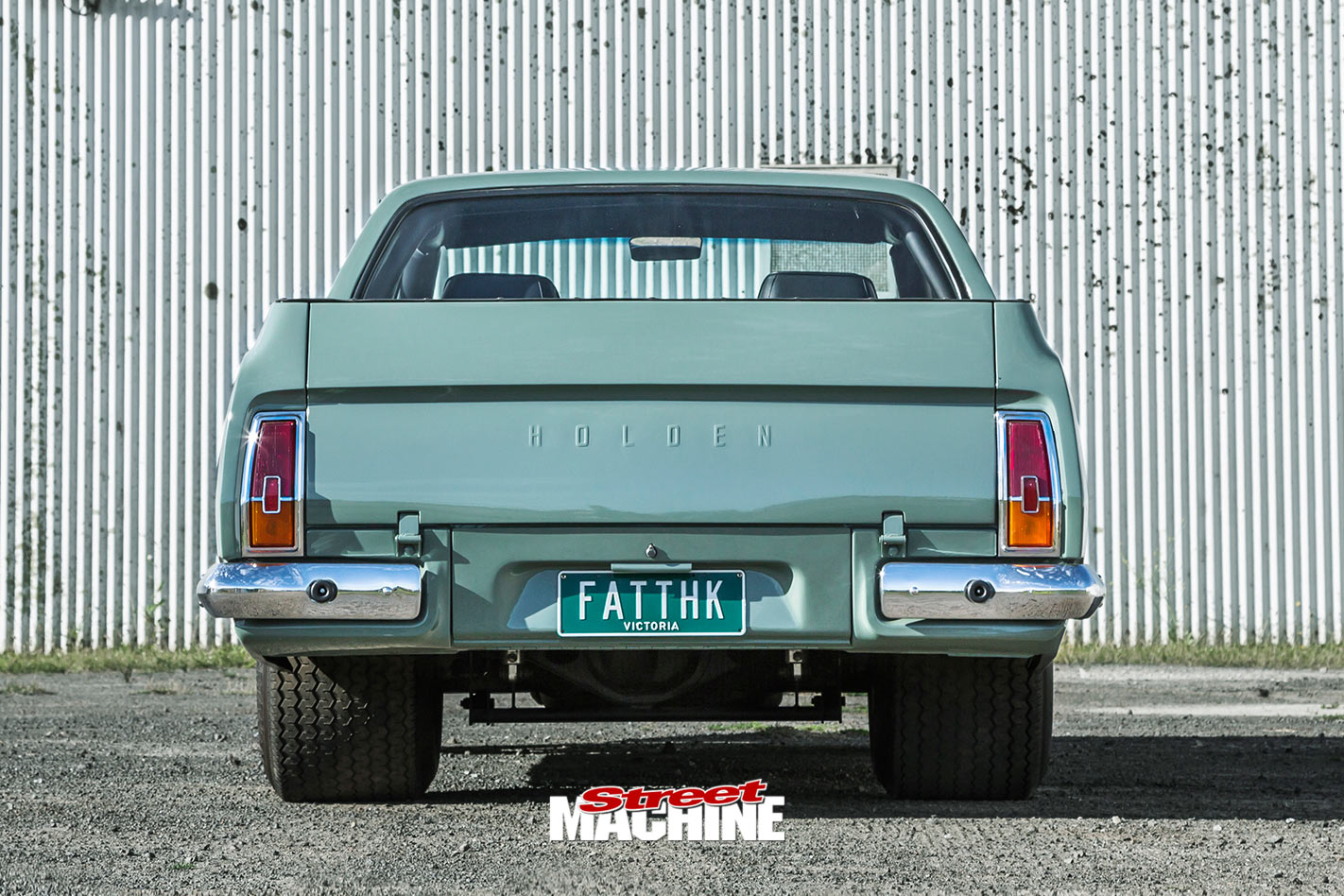 You might think that Jason’s gone with Pyrmont Green in honour of the Belmont and its elderly previous owners; however, the car started out white. “I just like those classic old pastels; this is an original Holden colour. I didn’t want to give too much away”

“Once I saw how much rust it had, I decided to go full rails and a four-link,” he says.
So are these mini-tubs or what? “Nah, I think they’re just tub-tubs. They’re big! I wanted the biggest wheels I could fit under there.” 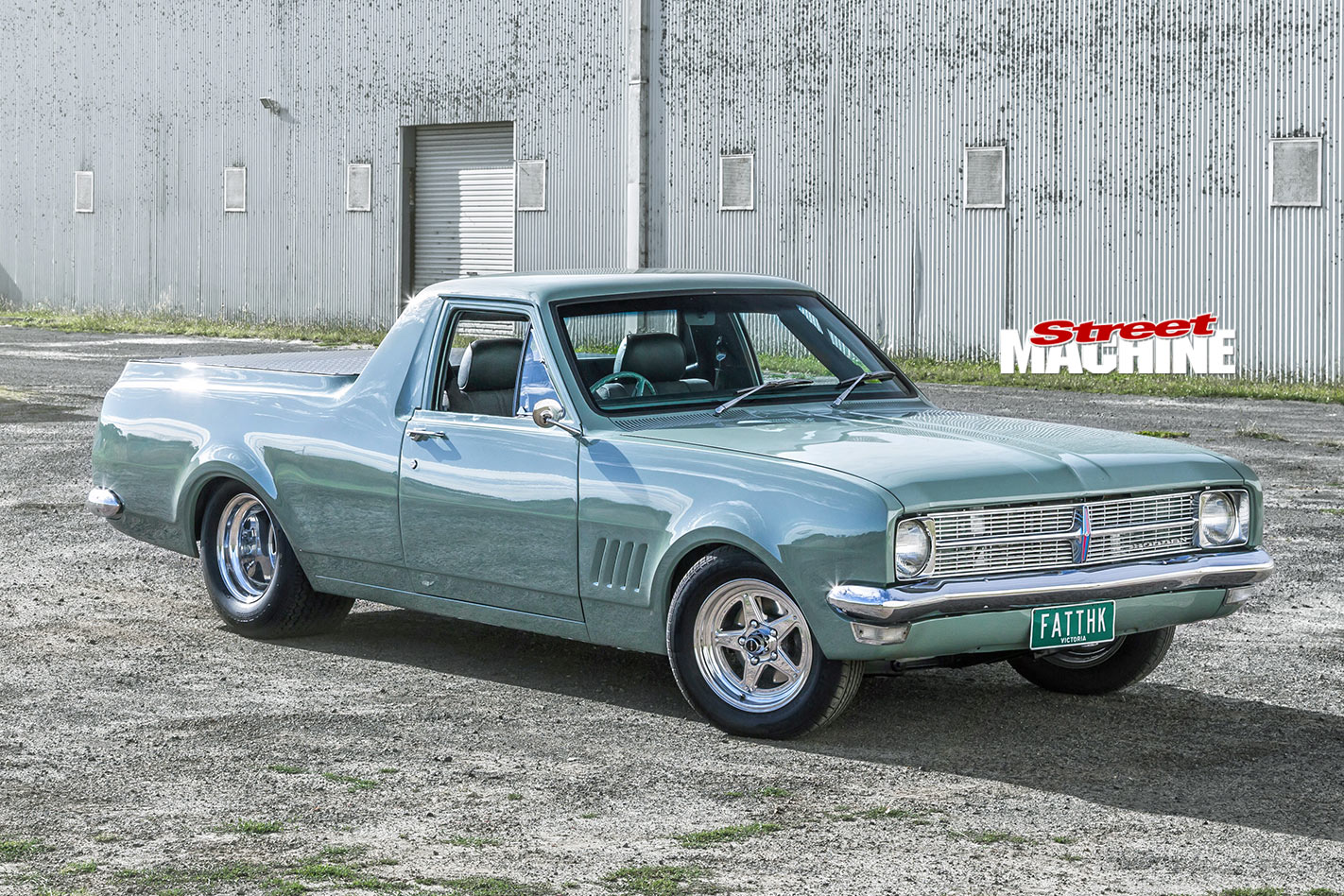 The rear rubber is so fat that the arches had to be stretched to suit; a relatively common mod on a tough streeter, but made complicated by Jason’s desire to keep the ute looking stock-ish.

“HK wheelarches are pretty complex,” he says. “You see a lot that are trimmed or folded on the inside edge to give more space for the wheels, but mine retains the original profile.”

Jason took this on himself, along with all the major surgery, while drawing on the talents of mate Mark Bedggood to help neaten things up. 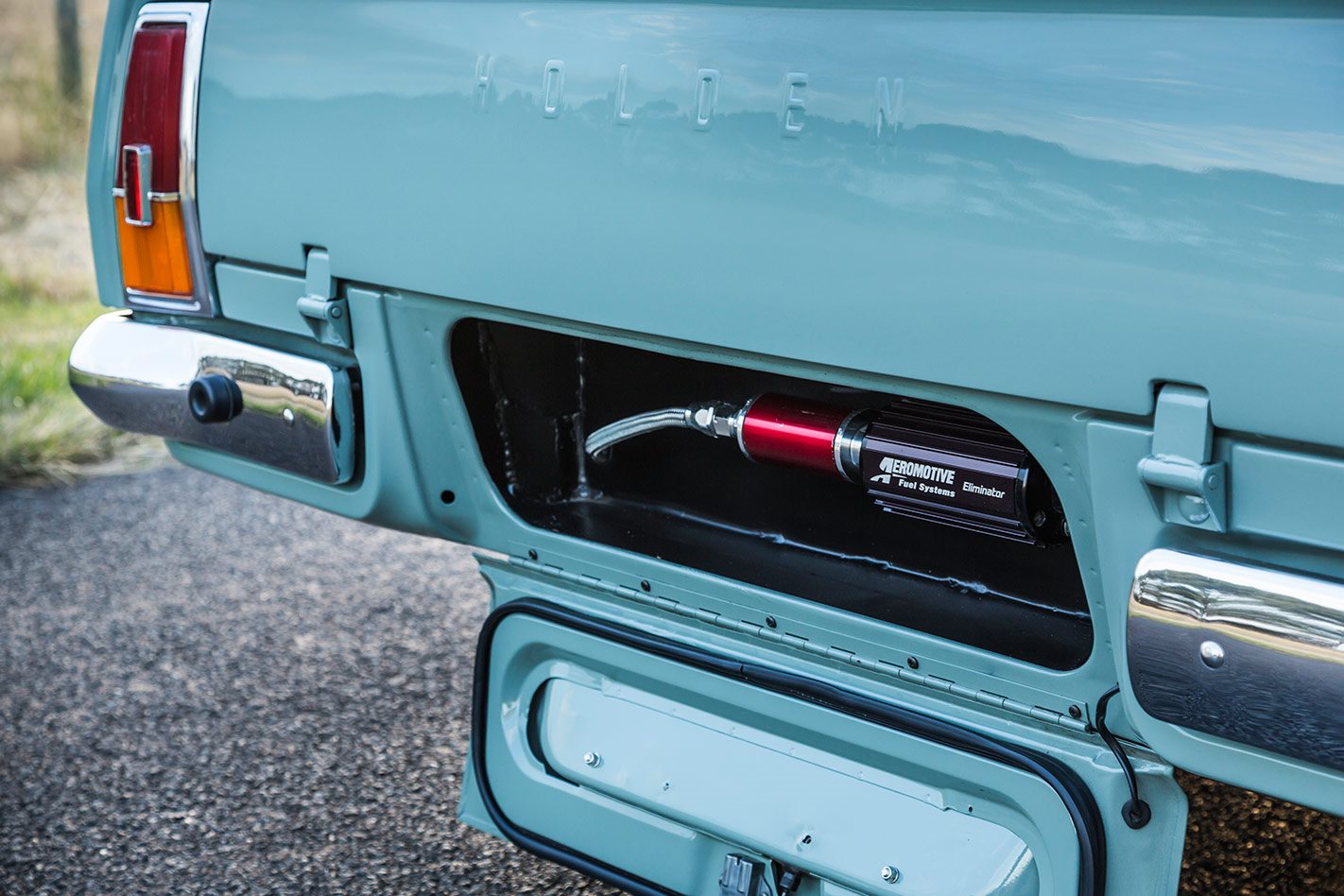 “I did all the pre-work and welding, while Mark gave it a tap here and there, a lick of body filler to smooth it over and four coats of Pyrmont Green two-pack,” Jason says.

A Holden red-powered, three-on-the-tree Belmont was never going to stay as such with stretched guards and 15x12s down the back, but Jason eschewed the current norm of installing an LS from a busted ClubSport. Instead, he contacted COME Racing for his go-fast bits, with Sam Blumenstein happy to hop up a VQ Statesman motor into a force-fed thing of beauty. Which wasn’t always in Jason’s plans. 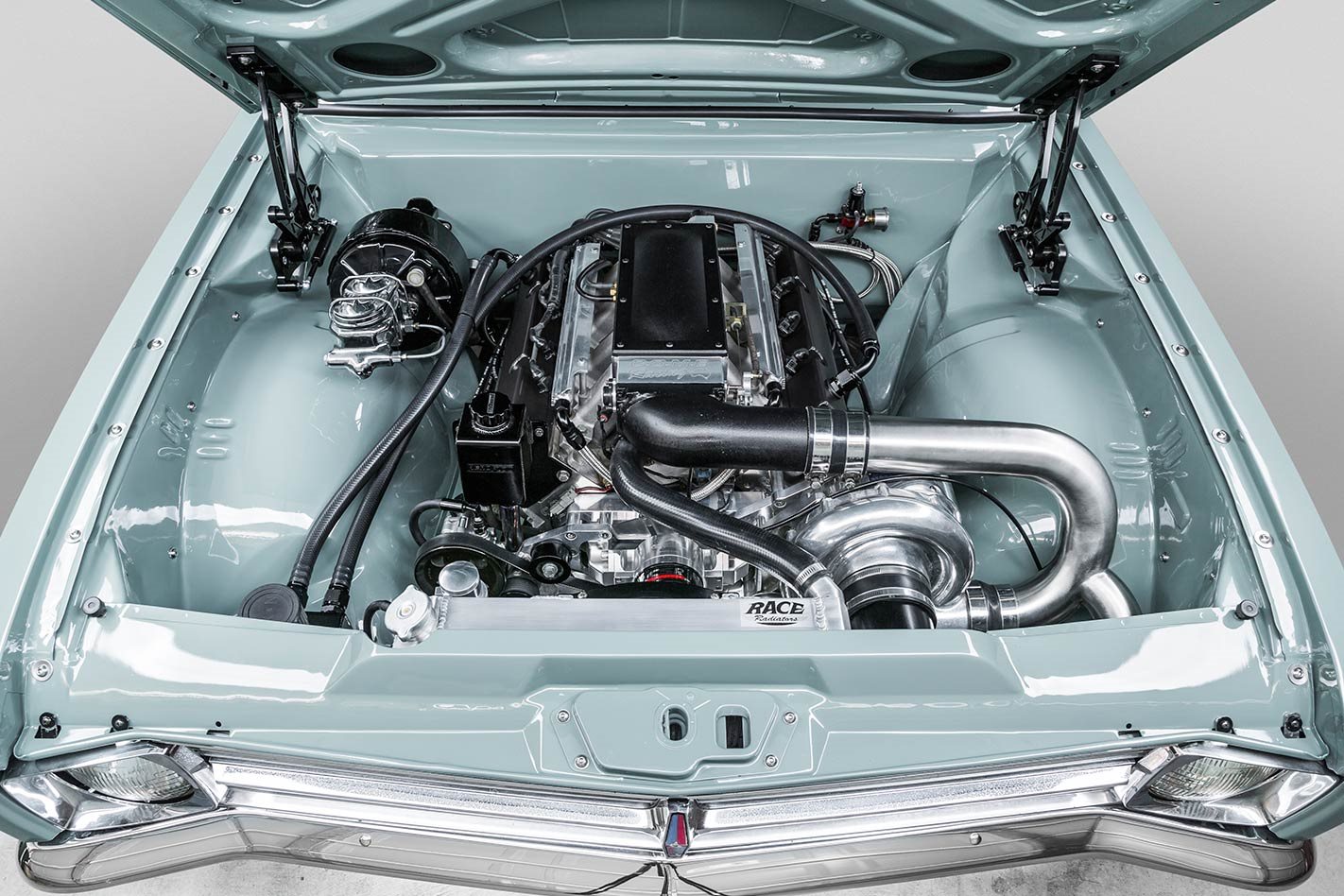 COME Racing cooked up an epic Holden stroker on Jason’s say-so, with black details contrasting nicely against polished billet. “Sam reckons the engine is good for 580hp naturally aspirated. It’s got 650 now; we should get a bit more when it gets its next tune,” says Jason

“The motor was just going to be the Stato 304; then I thought I may as well go 383,” he says. “Suddenly I’d bought the ProCharger off Facebook.” 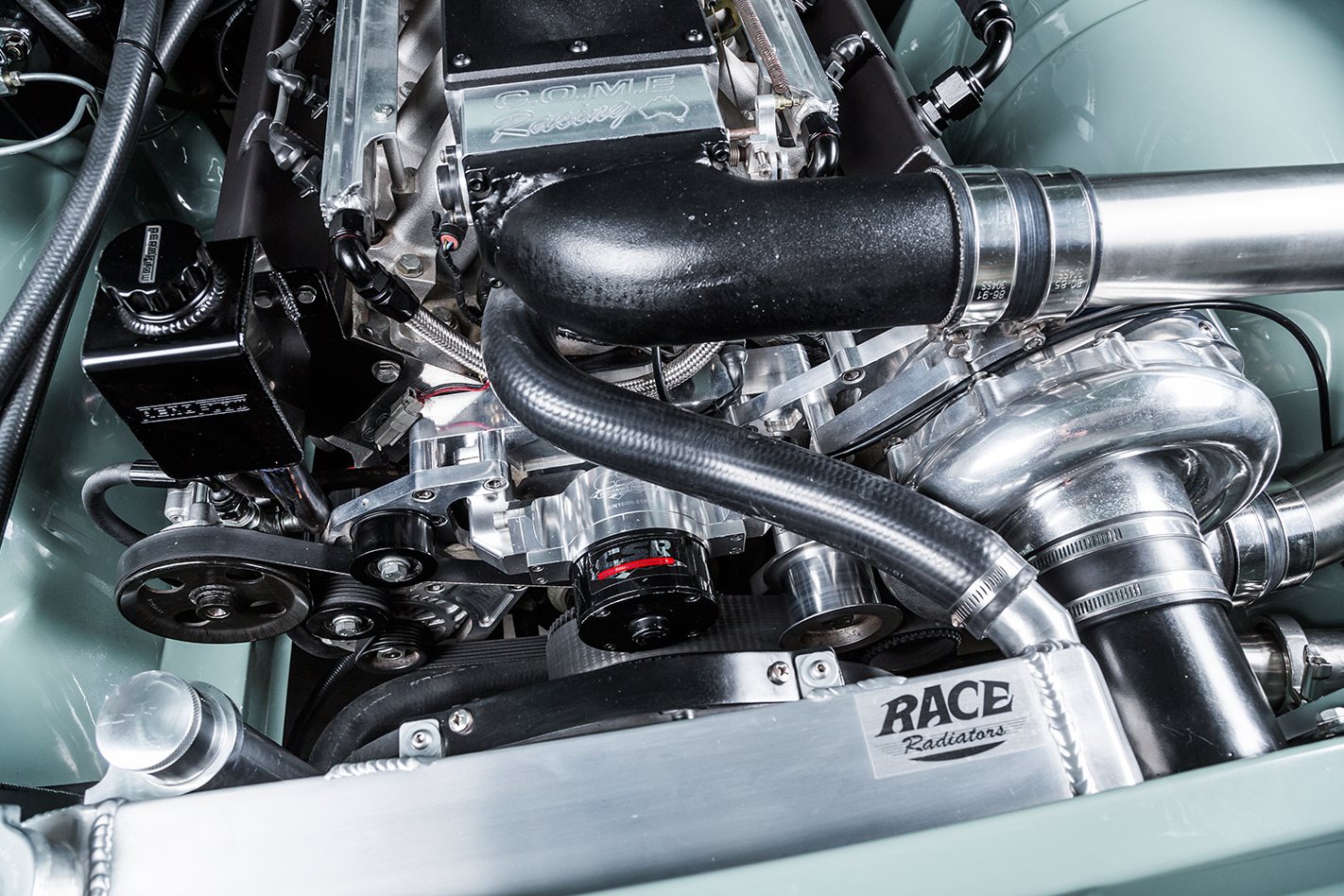 Jason and Sam exchanged emails and phone calls over a few weeks, discussing cam profiles, fuel types and the best rear-end ratio. The end result is a COME Racing masterpiece: A grout-filled Holden block with Diamond pistons, H-beam rods, a steel crank and solid cam. It’s topped by a pair of COME alloy heads either side of a trick twin-throttlebody set-up and dominated by the polished ProCharger offset to the passenger side.

A billet serpentine kit splits rotating duties across two belts: one to run the VZ Commodore alternator and power steering pump, the other straight off the crank to drag the blower around. Jason has had it dynoed at 650 horses at the treads on a fat tune. 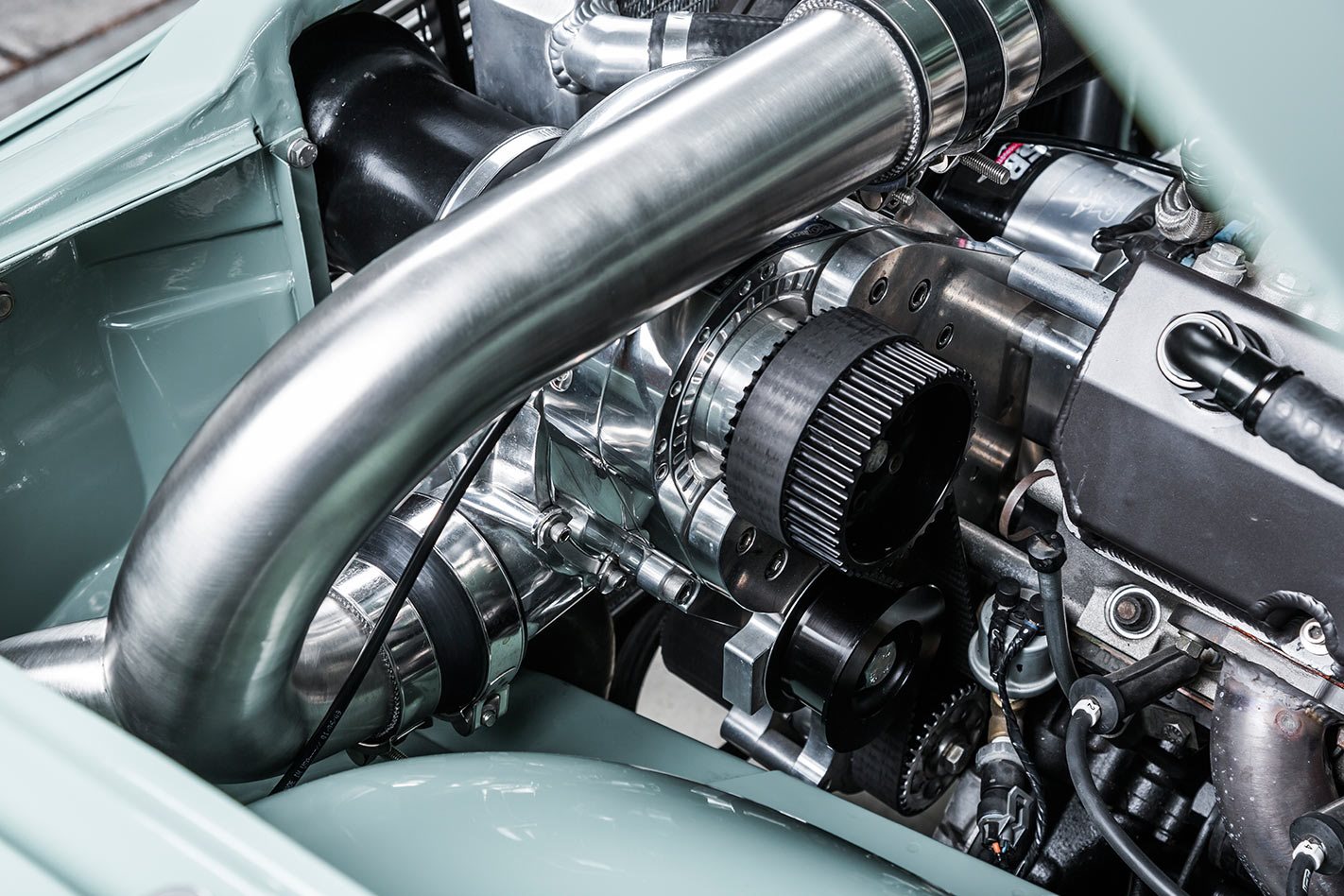 The engine is as much a piece of Aussie automotive art as it is a powerhouse, but Jason didn’t build it to look at. With plans for the Belmont to eventually see track duty, he considered a rollcage a must, with his dad Gavin of GP Constructions bending up a six-point ’cage. John at Rix Upholsterers trimmed it with zip-on covers so Jason doesn’t bonk his head too hard getting out.

John and his team also created the unique door trims that evoke a classic feel. The choice of a pair of Camry seats for the interior was an easy one. 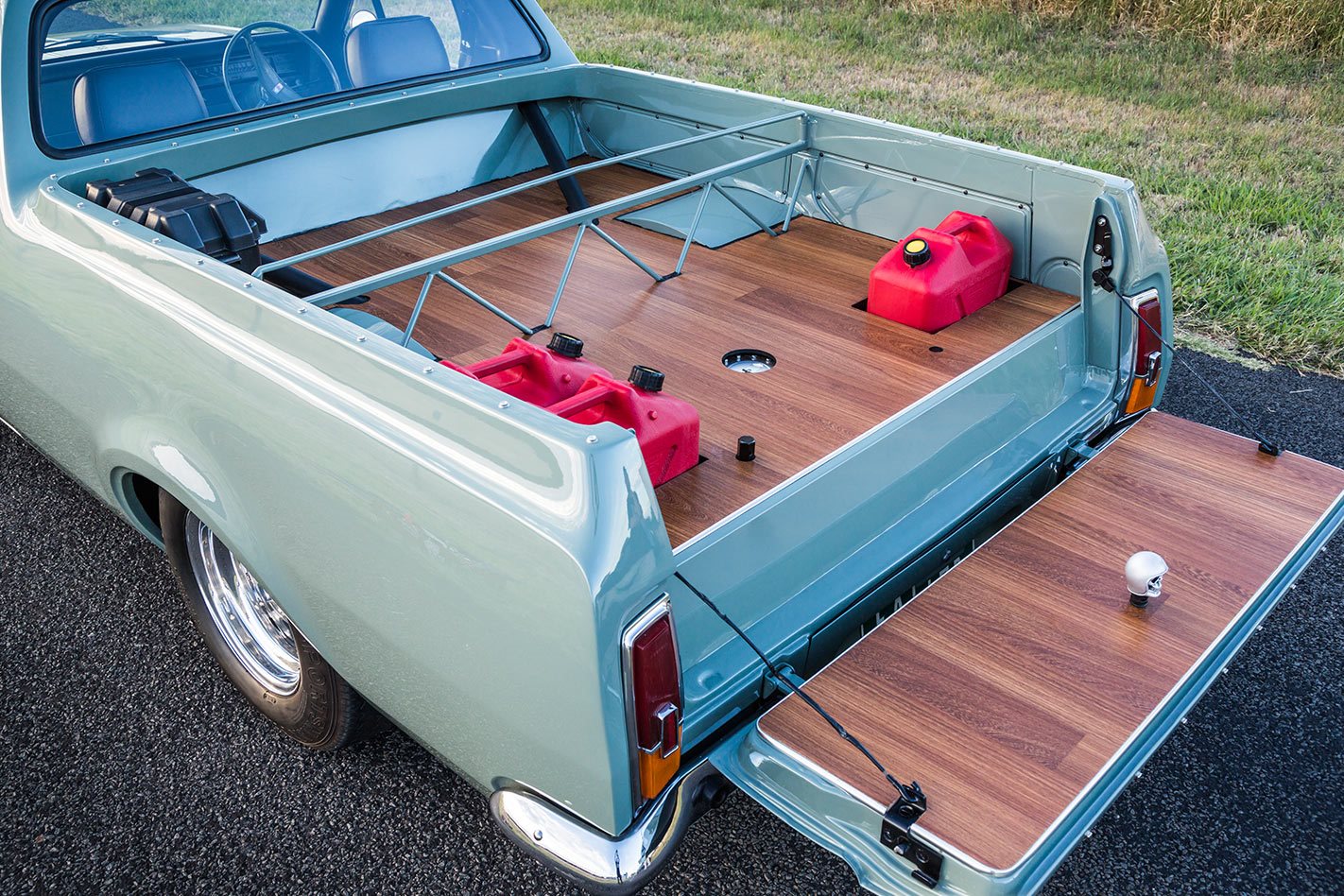 “This old Camry got towed into our yard one day; it was defected and one of the boys said they’d give it a home,” Jason says. “We frigged around with it for a bit, pulled the seats out and took the rest to the tip.”

Rix Upholsterers also retrimmed the pews and fitted custom carpet and headlining, but it’s the centre console that draws the eye. Built from a spare HK bonnet, it’s been flipped, cut and welded. 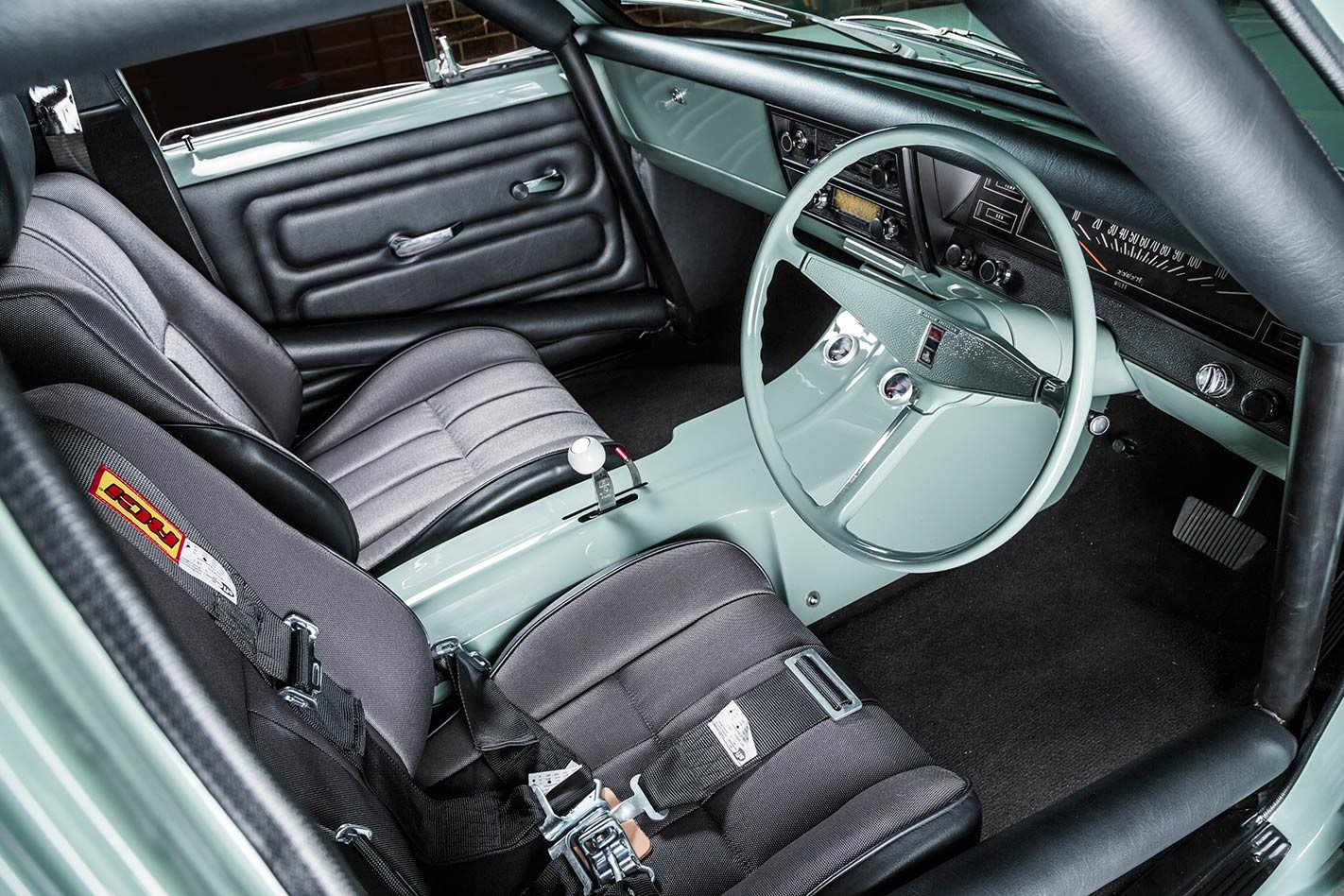 A shagged interior saw Jason fashion a custom centre console from a spare bonnet, while his dad Gavin knocked up the six-point rollcage

“While everyone else is going reverse-cowl, I’m going reverse centre console,” laughs Jason, who only has one regret about the custom-made piece. “I didn’t put cup holders in there; that’s the only stuff-up!”

Builds like this rarely come together in a timely fashion, and Jason’s was no exception. He was still screwing bits to the Belmont the night before its first outing at the 2016 Colac Custom Car & Bike Show. 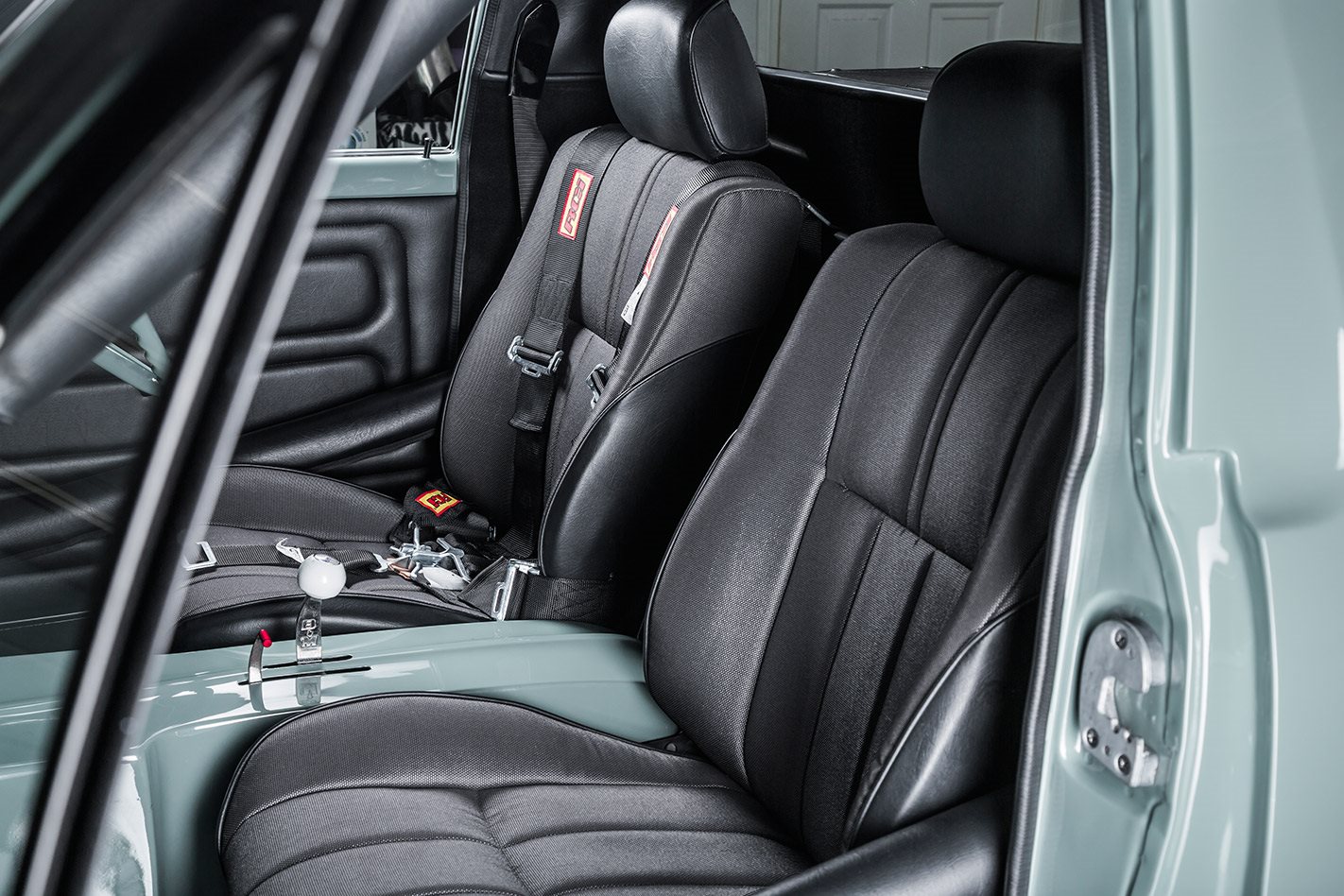 “I said I wanted to get it done by then and I did,” he says, beaming like a proud dad. The effort was worthwhile, with the HK taking out Best Custom/Modified
upon debut.

Trophies have flowed like water since, with a Best HK-T-G Modified at the Geelong All Holden Day and a Best Modified at the Guzzlers Car Club show, testament to not only Jason’s skills but the team he engaged to contribute along the way. 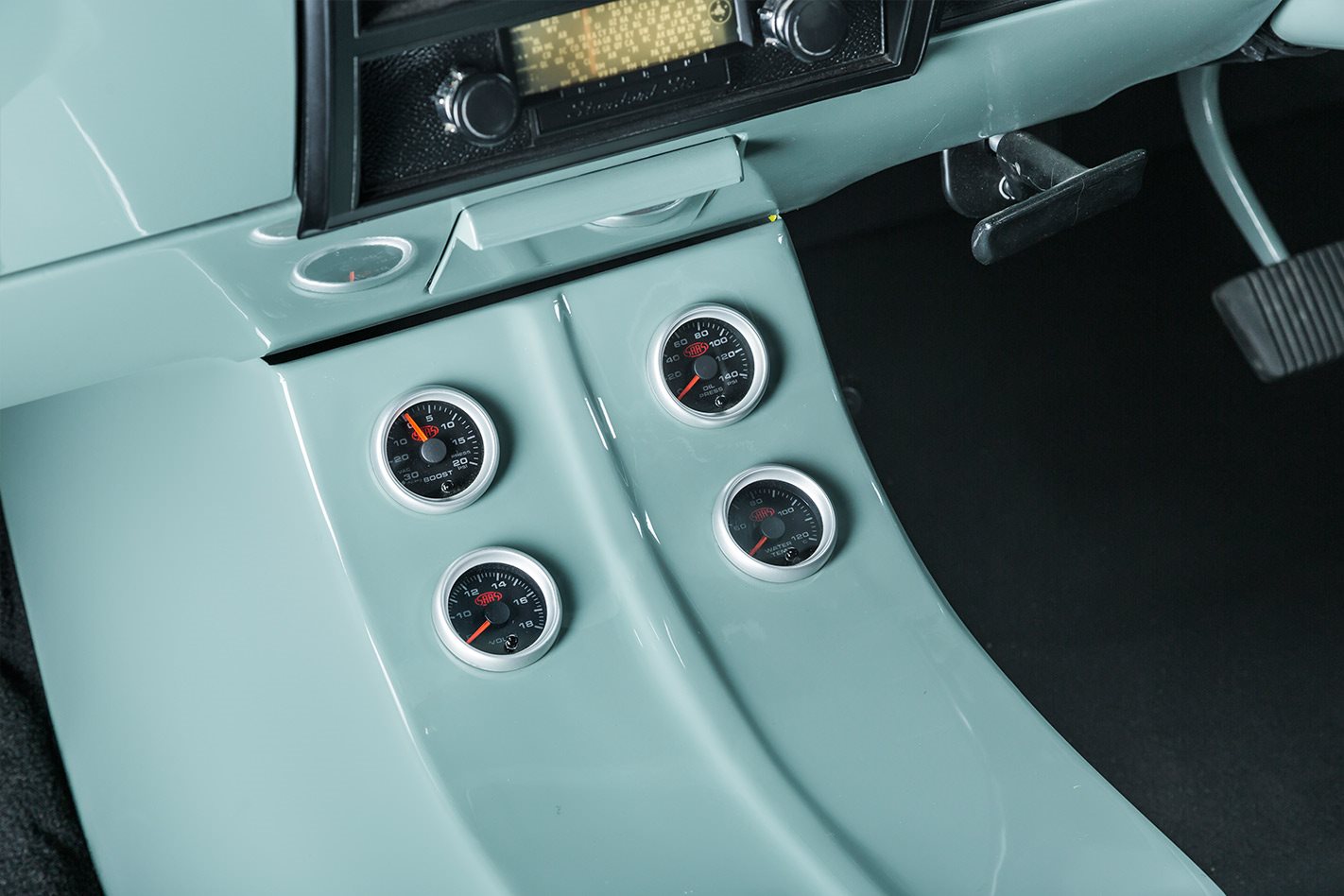 “I’ve got plenty of other projects lined up,” he says. “I’ve got an HK Brougham down the back and an HK panel van basket case. I’ve also got an HK Monaro I’ve owned for 25 years.”

Whichever Jason chooses to do next, you can be sure it’ll be a beautiful combo of tasteful originality mixed with unique engineering, monster horsepower and fat rubber.
“Perhaps I should do the Monaro; chop it up and make some people angry!”

If it’s gonna be as well done as the Belmont, it’s a Pyrmont Green light from us, Jason! 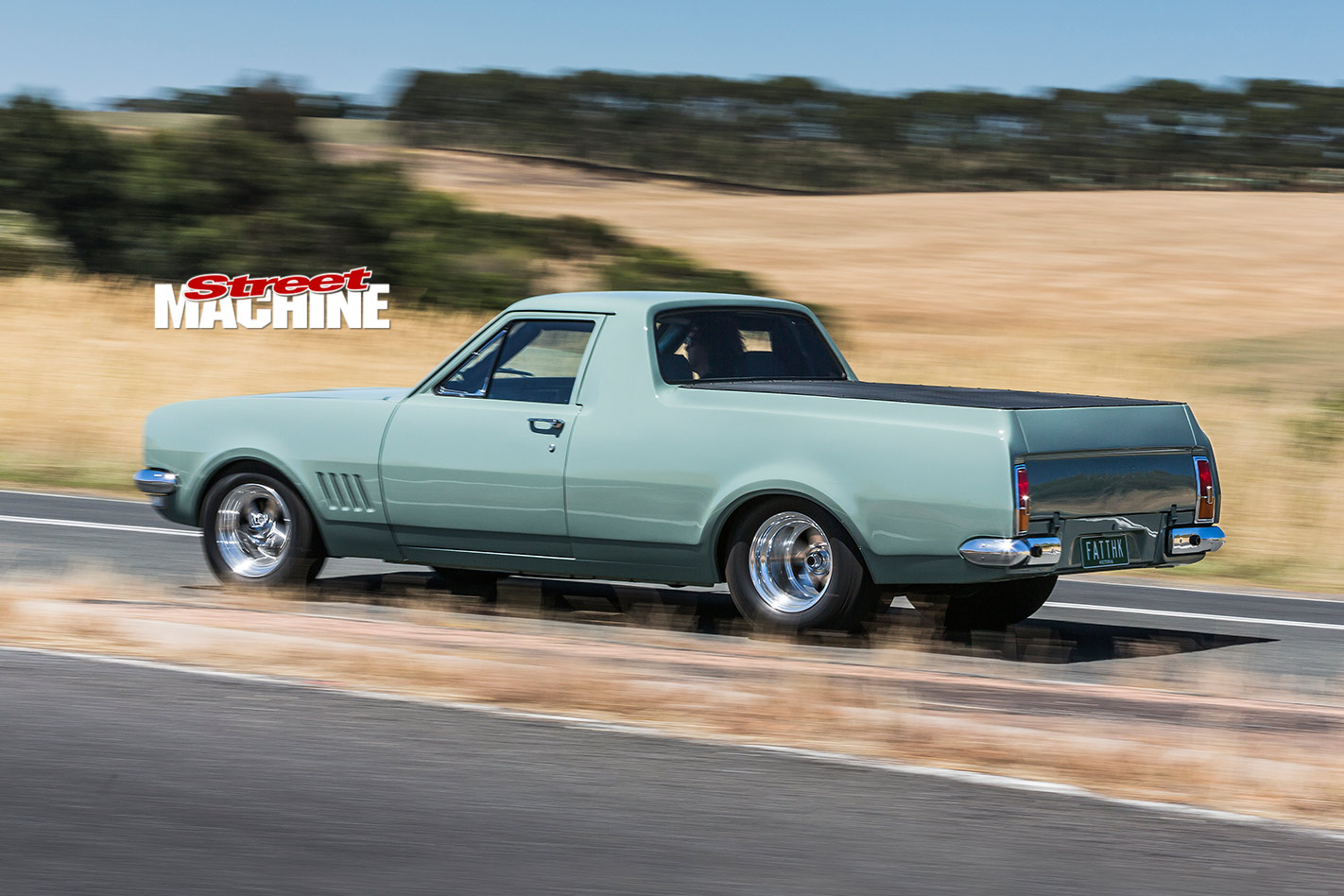