Some people just don’t know when enough is enough. Once they get their first taste of power they instantly want more, then more again. 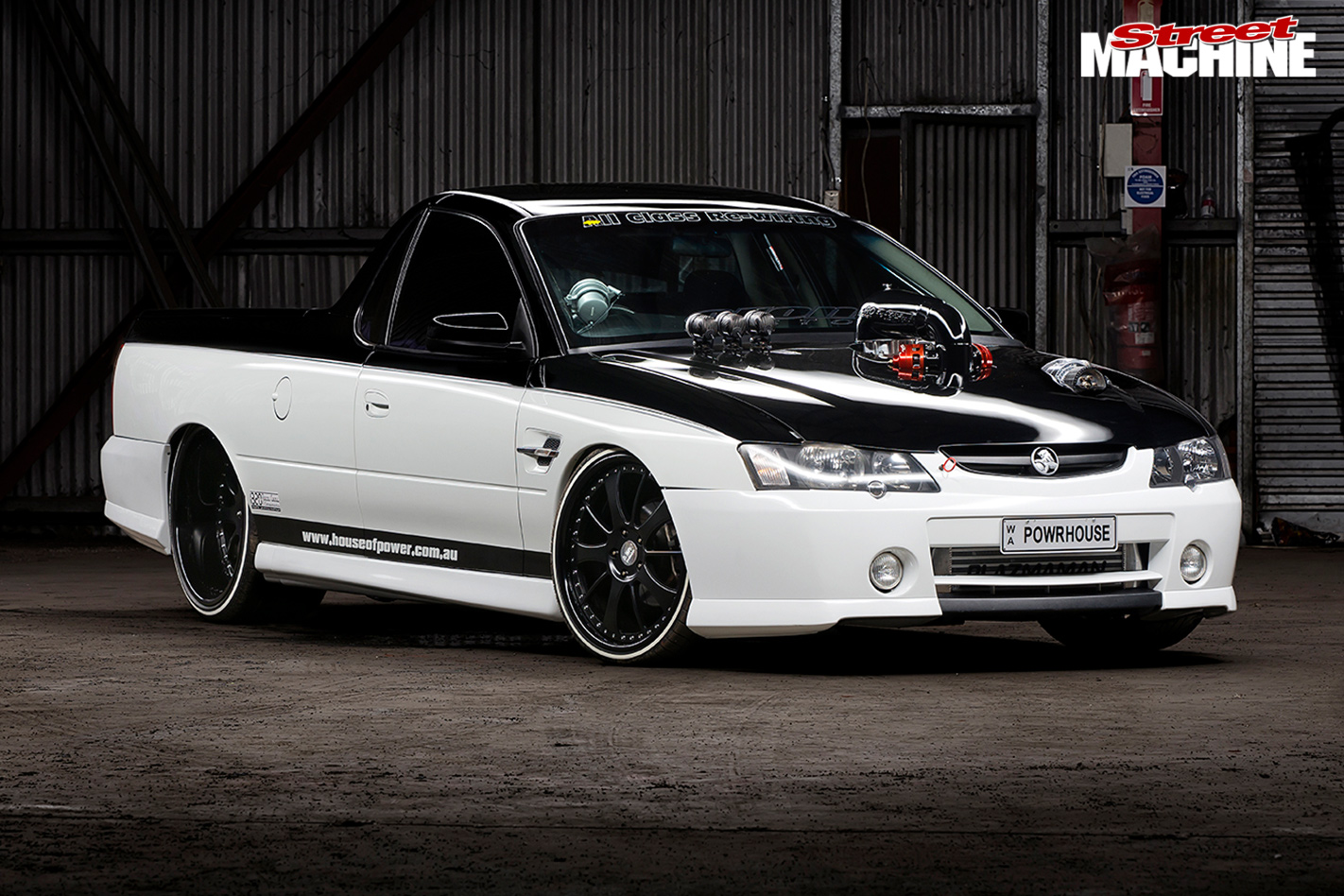 With big-inch rollers under the bum and two-tone paintwork, Luke’s ute almost looks like the much meaner, more aggressive cousin to Street Machine’s own VU 4 YOU giveaway car from almost 15 years ago

After owning a couple of mildly tweaked Commodores in his formative years, Luke Young decided he wanted something a bit fancier for his next purchase. “I ended up buying a standard 2009 VE Maloo,” the 27-year-old Perth bloke says. “I had good intentions of keeping that car stock, but they didn’t last long.” 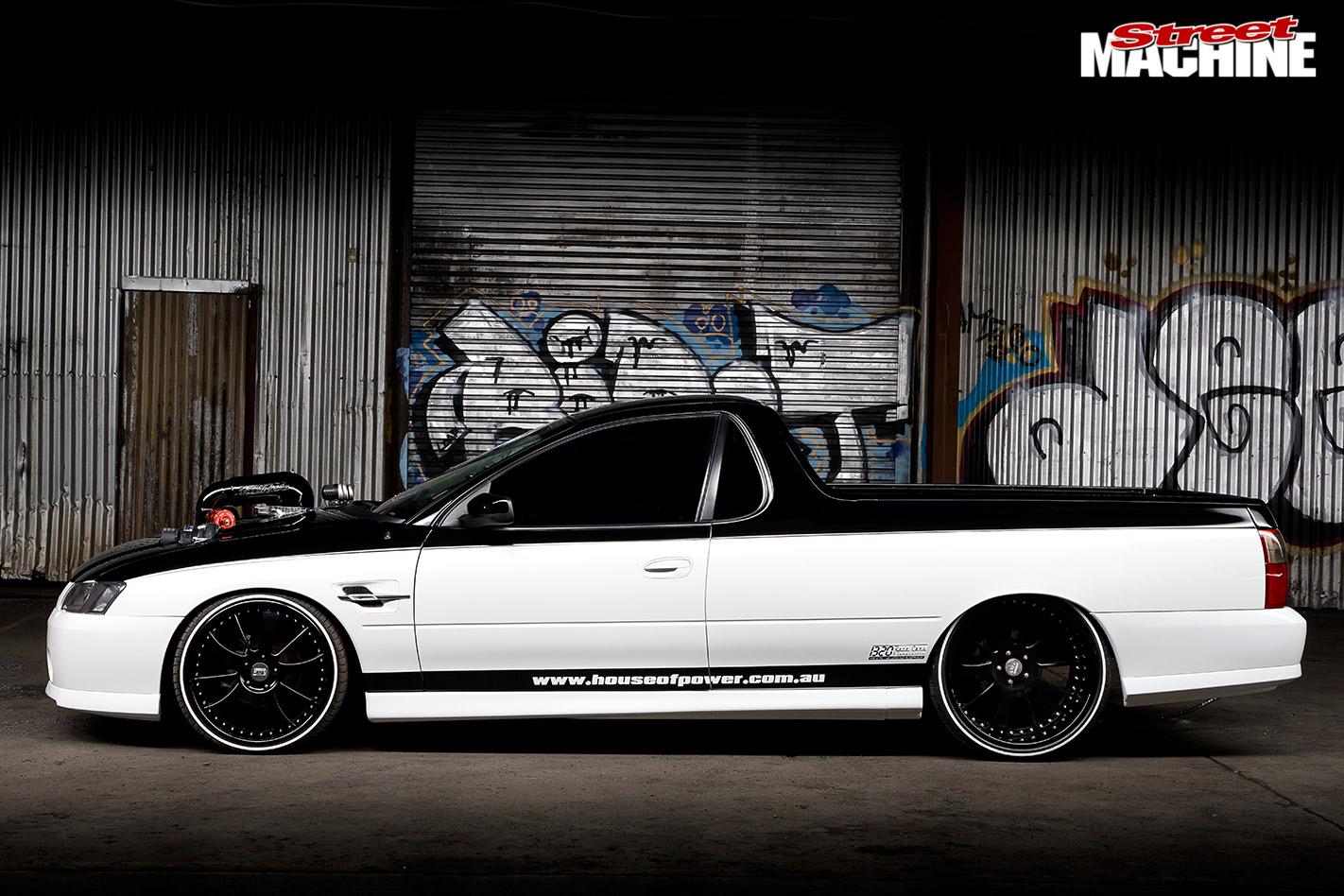 Luke got in contact with Rob Salvador from House Of Power dyno centre (HOP) to have a chat about cam options and other supporting mods and that’s where things started to escalate. He’s still not sure what went wrong, but now Luke has a 1500hp ProCharged 427ci VY ute parked in his garage!

“After the Maloo's first visit to HOP I left with 480rwhp, but it wasn’t long before I was back looking at blower options,” he says, mystified. “Rob talked me into going with a ProCharger D-1SC, so the ute was then making 600rwhp. I was over the moon.” 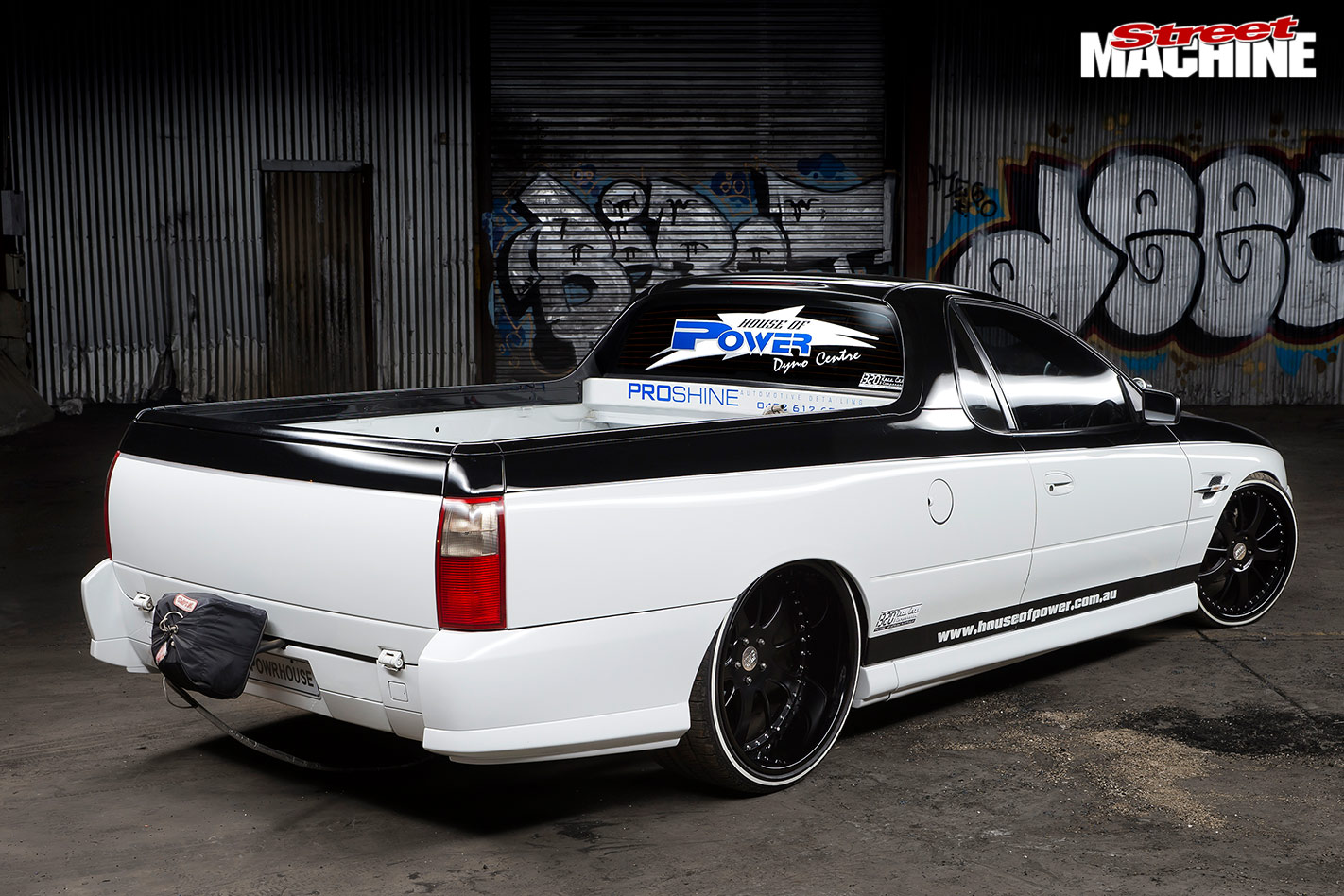 With more than 4.5 times the stock power running through the chassis, the standard Commodore IRS was thrown in the bin, in favour of a custom four-link rear-end set-up and sheet-metal 9in diff combo

But then Luke attended Gazzanats as a spectator and found that watching all the blown cars powerskidding was making him restless. He went back to Rob and discussed other options, without even having tested the limits of the current set-up on a track.

Instead of building the Maloo’s stock LS3, they decided to start fresh and build an LSX 427ci. Being happy with the side-mount ProCharger from Luke’s previous combo, they stayed on that theme but thought bigger. They went with the F2. 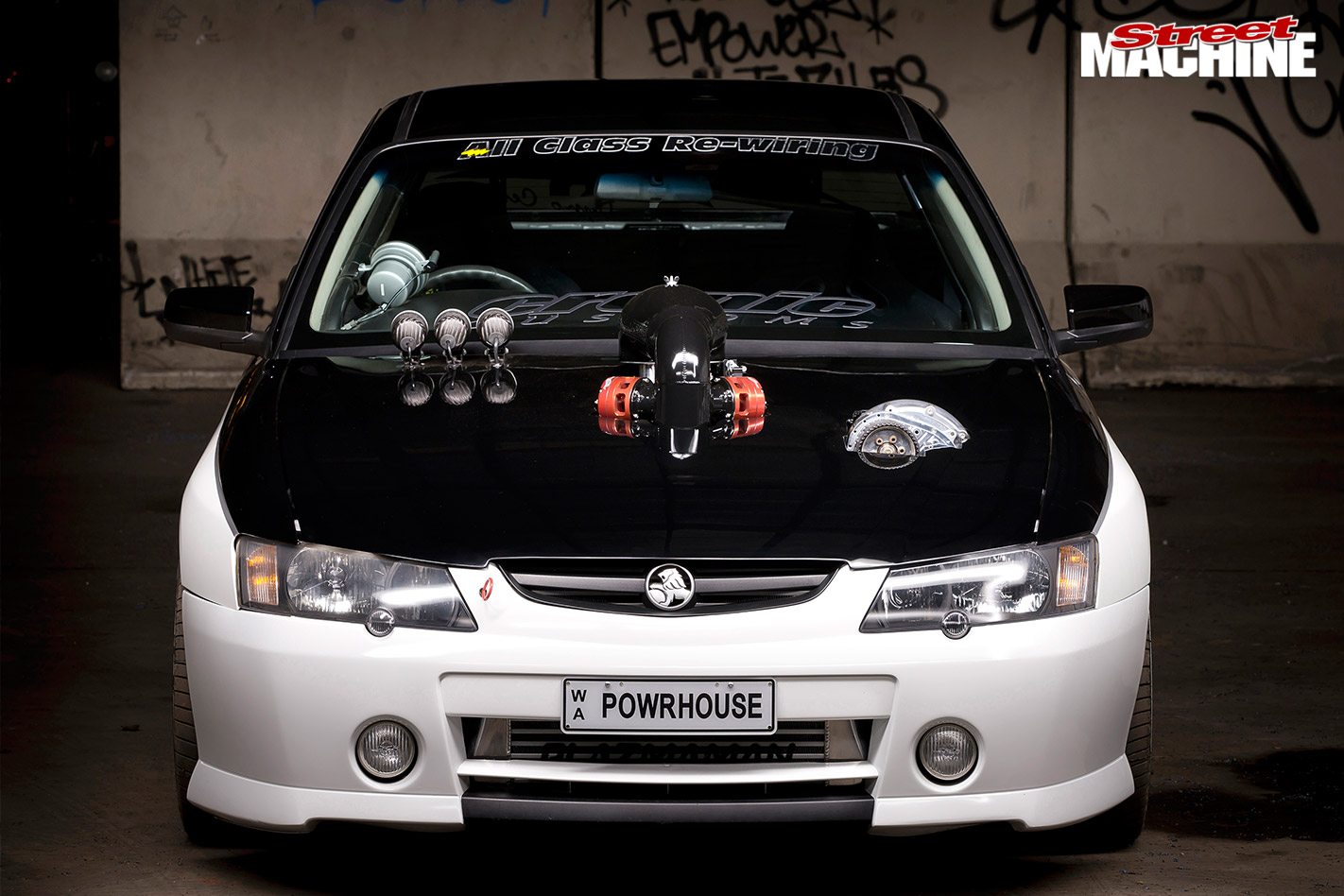 “By that point I think Rob was just as excited as I was, so the build started getting out of hand,” Luke laughs. “It was getting to the stage where the new combo was just going to be too much for the Maloo and we both kinda knew it.”

Since Rob had his VY drag ute for sale, Luke did the decent thing and snapped it up. “It was the perfect platform. All the hard work was done, so all I needed to do was get a new transmission and drop the engine in – it really was the best option for me,” he says. 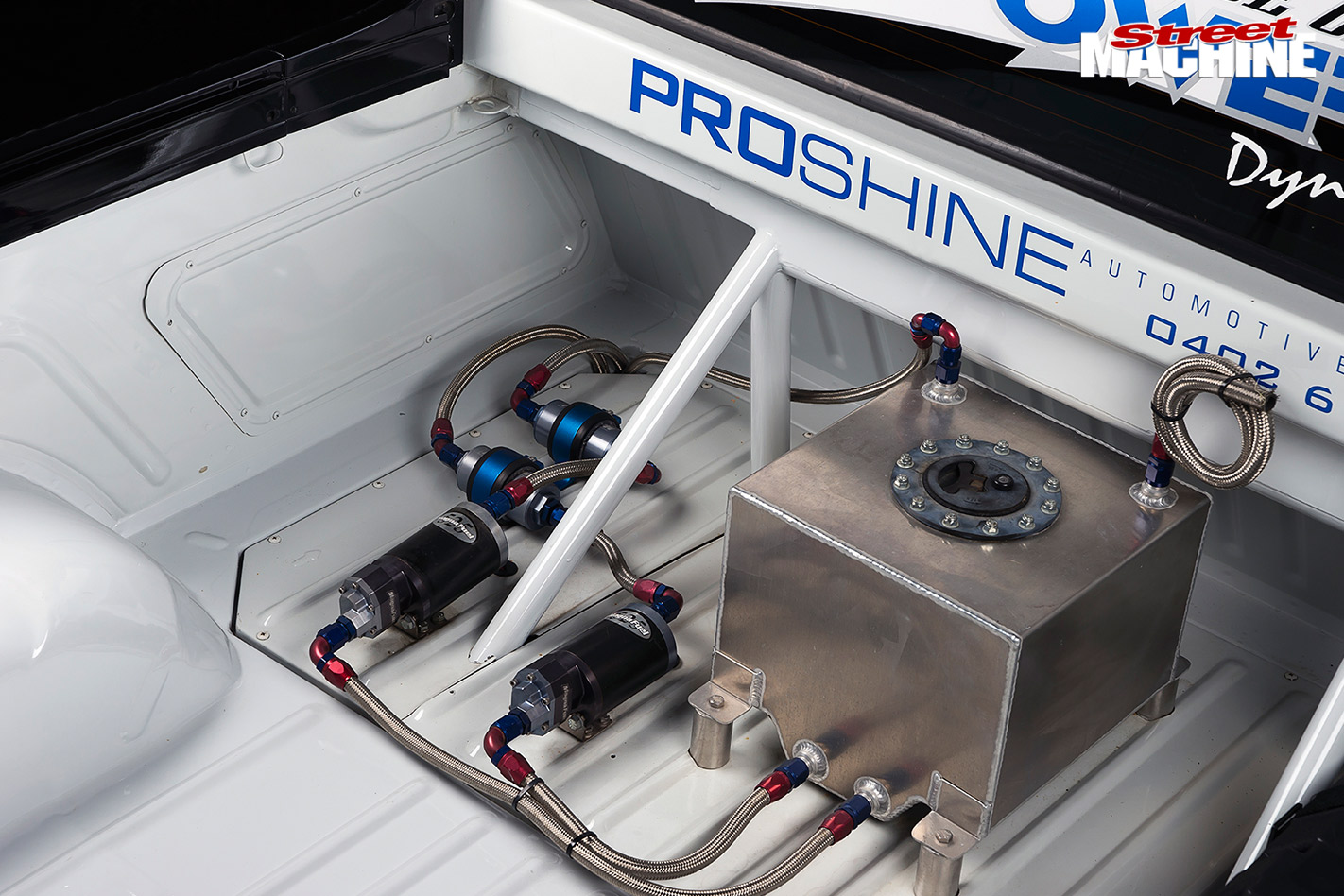 Rob worked with Leon from A1 High Performance to construct the ultimate LSX for Luke. They stretched the 427 block to 434ci, thanks to a forged Callies crank wearing Oliver rods and Diamond pistons. A Comp Cams solid-lifter cam lives up top, working on Crower lifters. The deep-breathing All Pro LS7 cylinder heads are equipped with Jesel steel-body roller rockers, titanium Xceldyne valves and Manley valve springs. A Nick Williams throttlebody and Mast high-rise intake manifold tops the combo off. 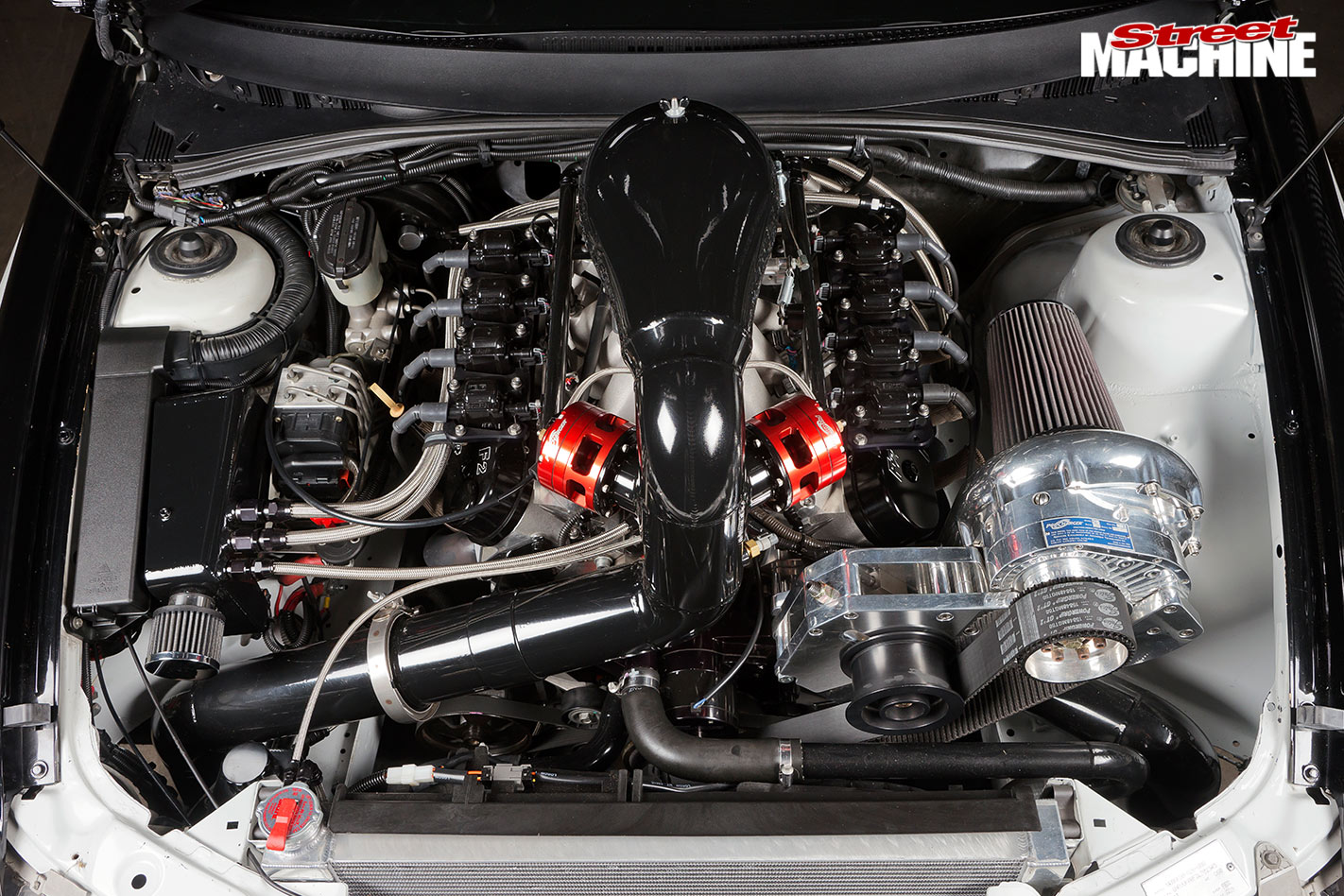 When the D1 ProCharger wasn’t enough for the mammoth 434ci LSX, the boys stepped up to the gigantic F2 centrifugal supercharger. Big forced induction set-ups are renowned for working brilliantly with alcohol-based fuels like E85, which is what Luke runs the ute on

That massive ProCharger F2 supercharger is complemented by twin blow-off valves and a fuel system just as serious. Twin Magnafuel 625 pumps take C16 from the custom tank down dual –10 lines, all monitored by a stock LS1 ECU. Picking the right injectors has taken some trial and error.

“We started with 1600cc injectors on the first engine dyno runs,” Luke says, “but at 18psi they simply ran out on us around the 1435hp mark. Rob has since installed 2000cc injectors to rectify the problem but we haven’t had a chance to get back on the dyno for a full-power run.” 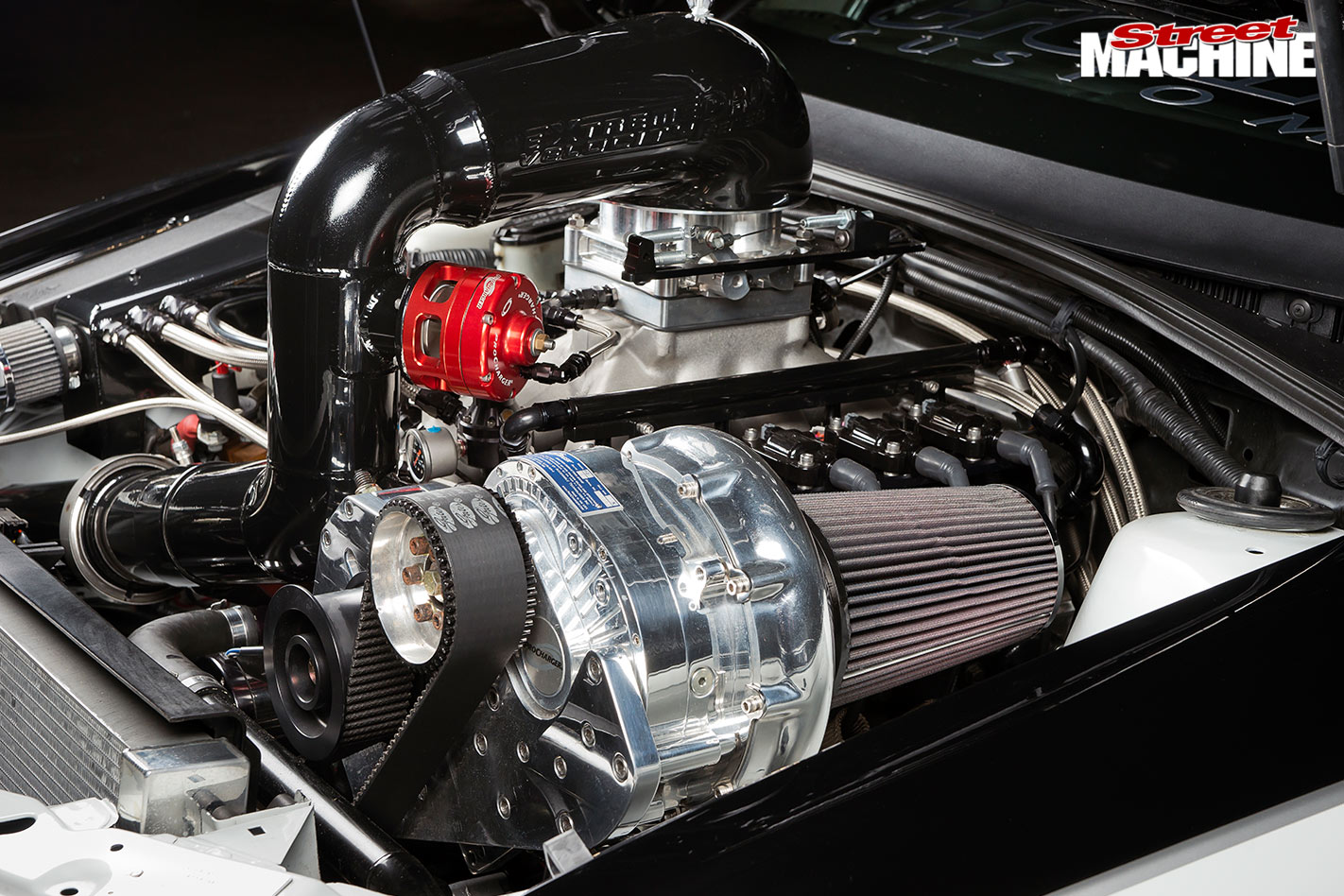 The boys actually maxed out the original 1600cc injectors and had to step up to 2000cc items so they could run more than 18psi through the F2 blower! Compressed air is chilled by a front-mounted air-to-air intercooler, before passing through the Nick Williams throttlebody and Mast intake manifold – all nuclear-grade hardware

Rob also crafted the custom-made, twin two-inch exhaust system and the pipework that runs from the engine to the intercooler. Slotted in behind the fresh motor is an ATI SuperCase Powerglide transmission with a matching 4500rpm converter. Then it was just a quick trip down the road to pick up the Final Drive Engineering sheet-metal nine-inch shorty rear end, which tucks under the generous tubs. 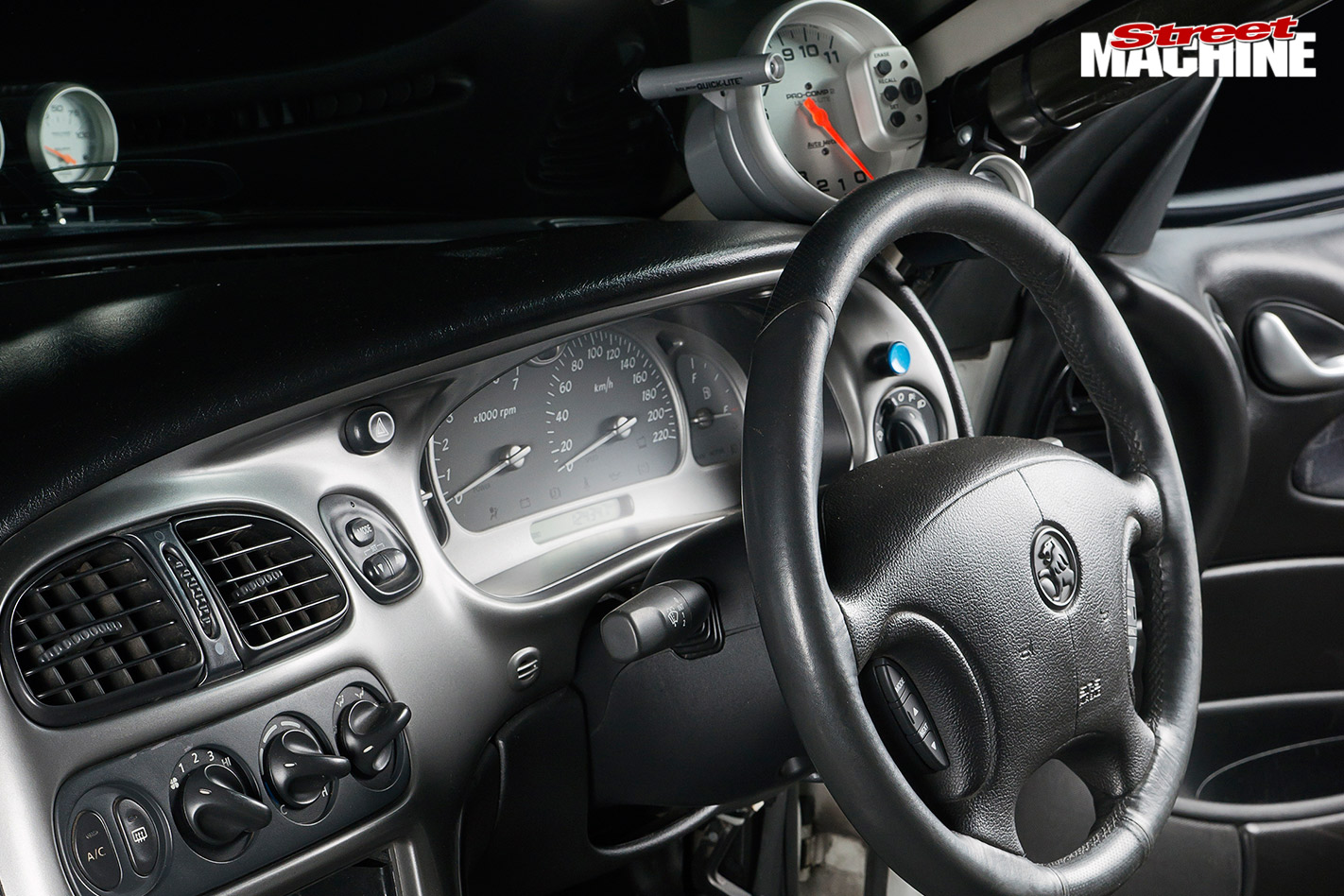 Under the rear of the car you’ll discover a four-link and enlarged wheel tubs, along with Strange suspension components. The nose has been treated to Pedders and Kings gear. Inside, it’s a simple story – rollcage, aftermarket gauges and a Hurst shifter.

Externally, the car remains pretty much the same as when Rob raced it, albeit for the killer new rims that Luke couldn’t help but buy from Cronic Customs. The KWC214 wheels wear satin-black inners with gloss-black outers for a twist on a popular theme. The rears are 22x12 with Pirelli 335/25s and the fronts are 20x8.5 with Achilles 245/30s. James from Pro Shine treated the thin-walled treads to some fresh whites. 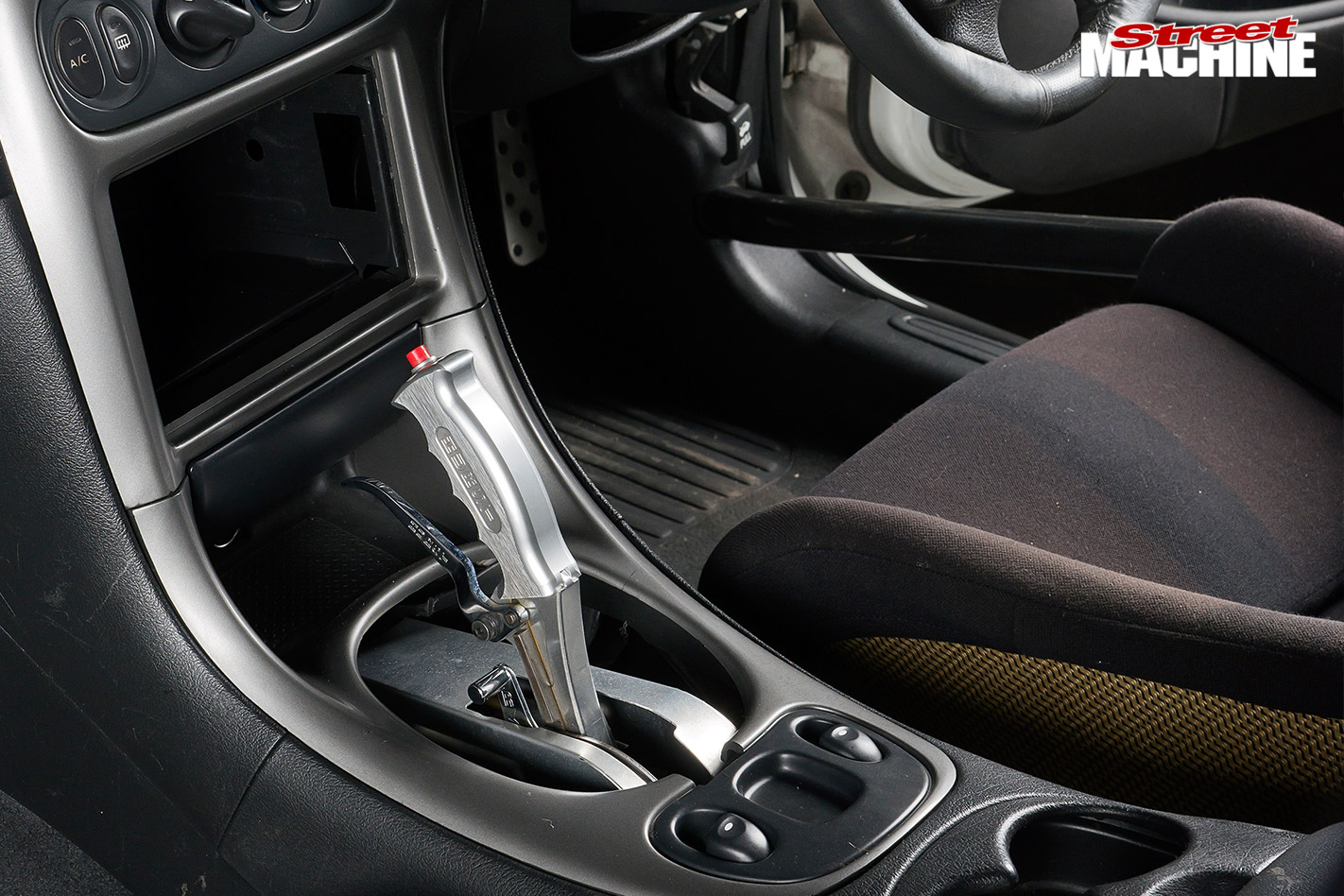 With the car wrapped up and running, it’s just a matter of young Luke getting some time in the driver’s seat. “I’m excited to see how well the car goes, as it’s well and truly above what I imagined,” he says, “and to be honest, I can’t believe that I really have gone this far. I’m desperate to race the car as often as I can, and second to that, I want to do a few events here and there.”

Rob, he acknowledges, has done a great job of developing the car. “Without his influence and knowledge I’d have still been messing around on the street.” 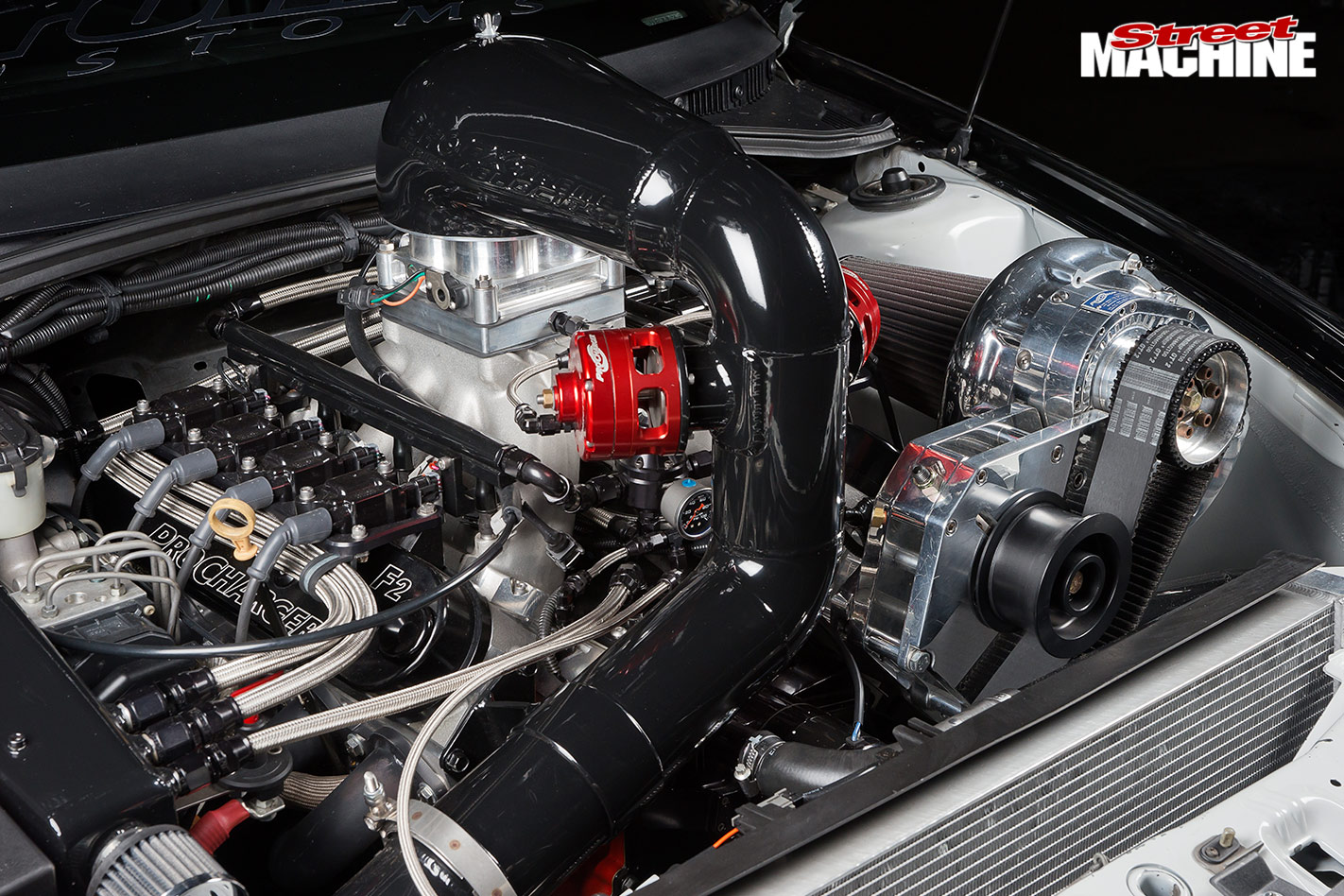 Side-mounted centrifugal superchargers were the hot news 15 years ago when injected motors were really becoming mainstream in the V8 scene and people were chasing bolt-on power for near-stock motors. However, the huge ProChargers like Luke’s F2 have maintained a strong following in America, as they allow simpler plumbing than a turbocharger and lower overall height than a traditional positive-displacement blower, but still have all that boost-inflated horsepower-rich fun. Capable of making more than 50psi and flowing enough air to support 2000hp, the F2 is a serious bit of kit, but there are F3 ProChargers that can support over 3000hp!