Dean Walding gives us the lowdown on his Pulsator-tribute FX, and we chat to Graham Flavel, builder and driver of the original Pulsator

AFTER spying Dean Walding’s Pulsator-tribute FX gasser at Mildura’s Nostalgia Drags, we tracked him down for a chat, as well as the owner, builder and driver of the original Pulsator, Graham Flavel. In addition to creating and racing Pulsator, Graham was a pioneer of South Australian drag racing as one of the pivotal figures that created the Brooksfield strip. 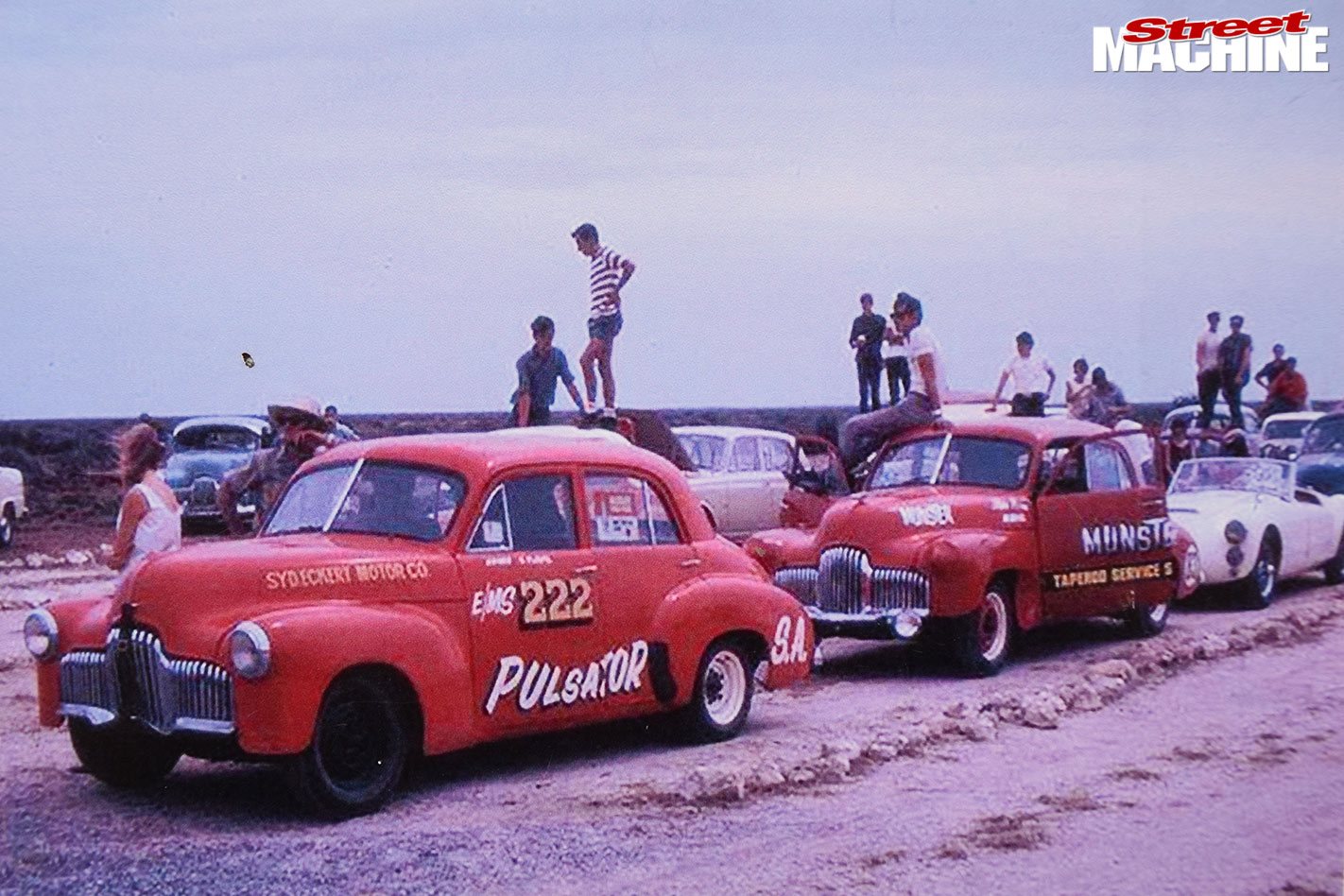 The original Pulsator at Brooksfield in '67 when Graham first beat Peter, which is why he's ahead of Munster in the line up

Graham, tell us about the original Pulsator.

I started drag racing my FX Holden in ’65, when we opened the Brooksfield track. It was originally a metallic blue street car; I’d drive it up there, rip the exhaust off and then race it. Peter Hines in Munster was always winning everything and I wanted to have a shot at him, so I took it off of the road and made it the Pulsator in ’66. 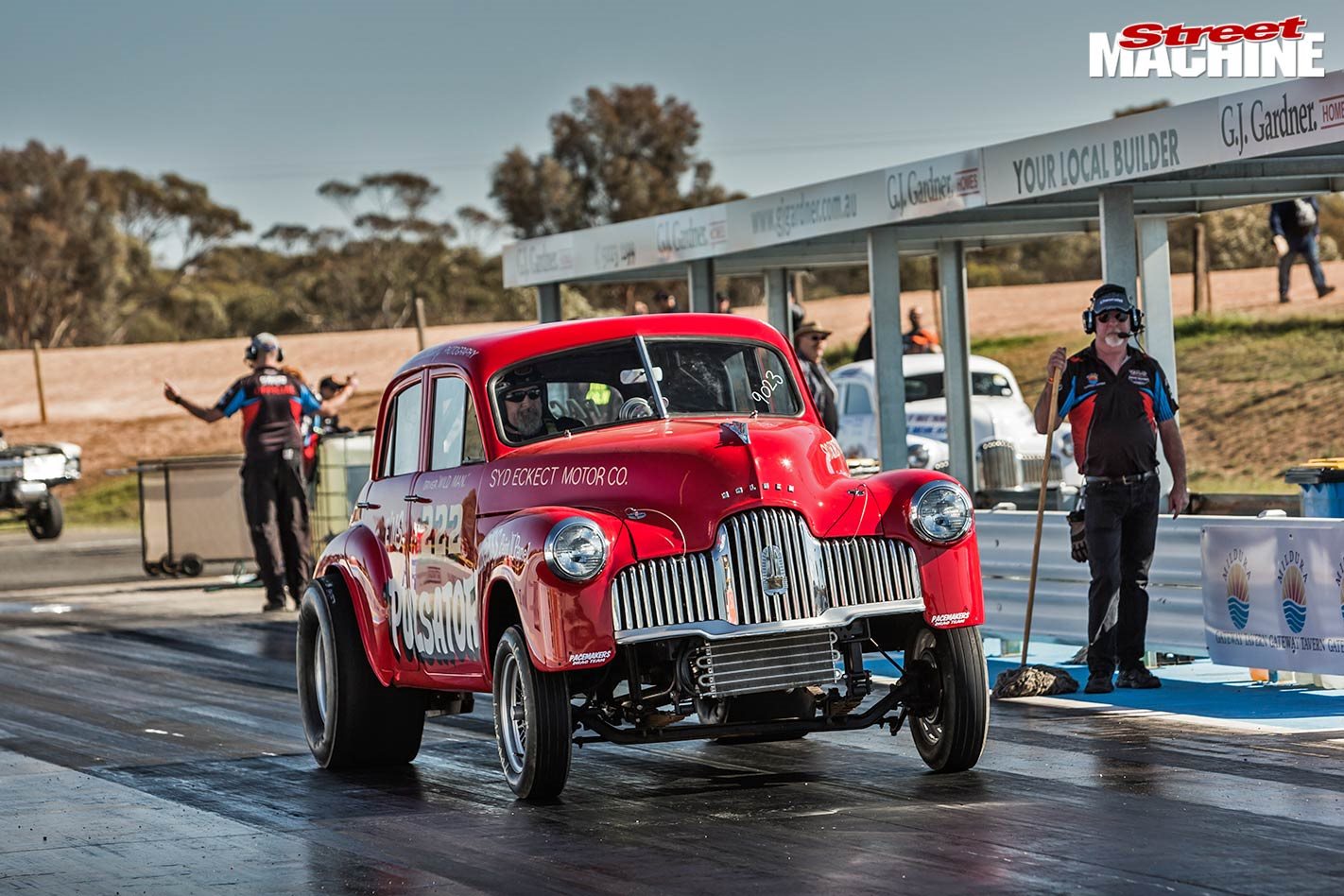 There was a radio show leading up to the Brooksfield meets and they’d talk about the two E/MS (E Modified Stock) Holdens and what might happen next meeting; we were drawcards, as Peter was beating me by just half a car length. When I finally knocked him off in ’67, the crowd went crazy. On the return road people were yelling and cheering – it was unbelievable. After that I won quite a few meetings in a row; then the Exterminator came on the scene. I beat them on the first meeting but they cleaned up everyone after that. I can’t tell you what times it ran at the Brooksfield eighth-mile, and I only raced once over the quarter-mile with 17.4 seconds, which was quick in those days, especially as a street car. 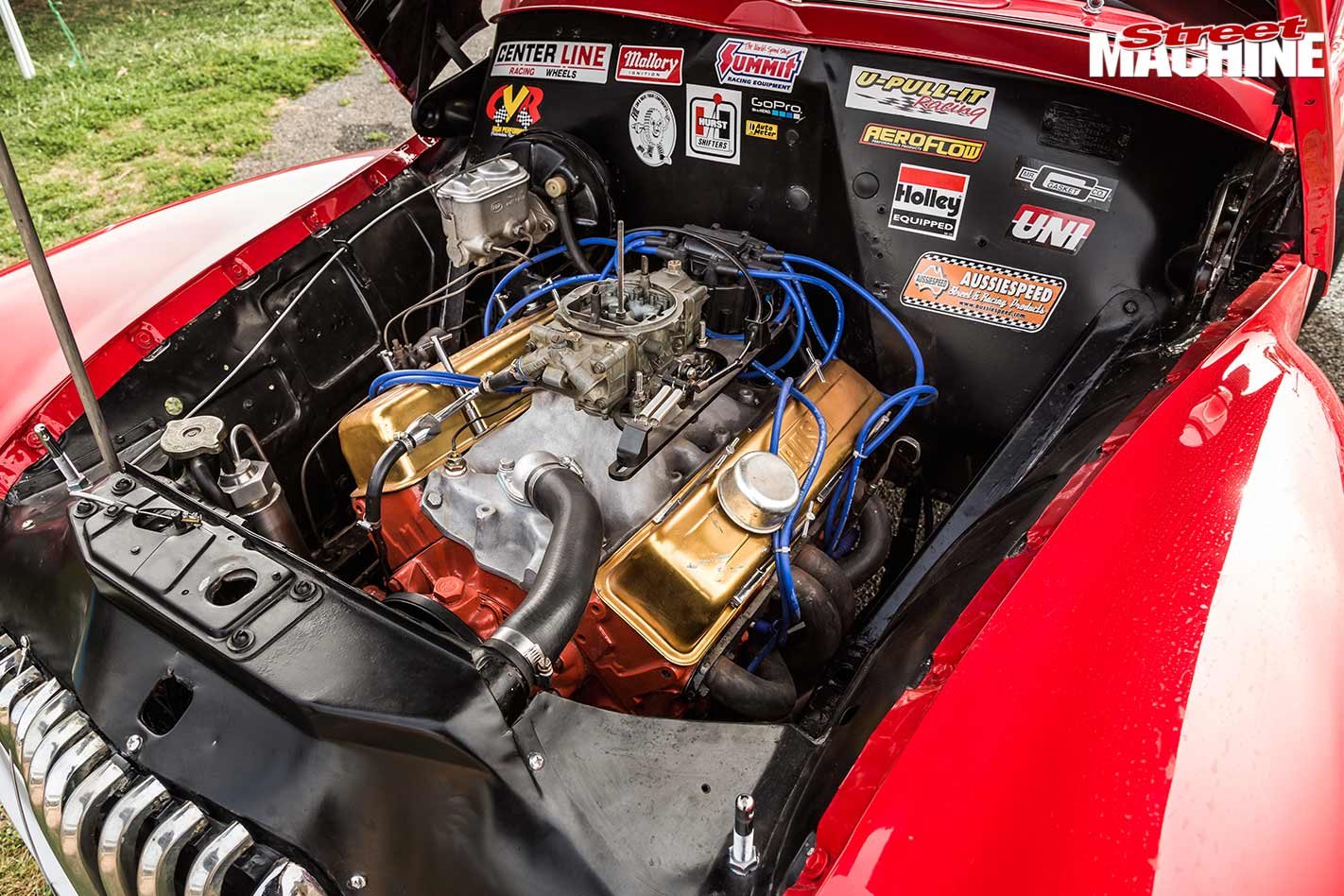 What was the driveline?

I ran the old 138ci grey motor bored out 60thou and all Holden running gear; that was the E/MS rules. You could do what you wanted with the head and camshaft but we had to run Holden carbies, so we modified the twin Strombergs a fair bit. We also had a limited-slip diff and took a fair bit of weight out of the car. 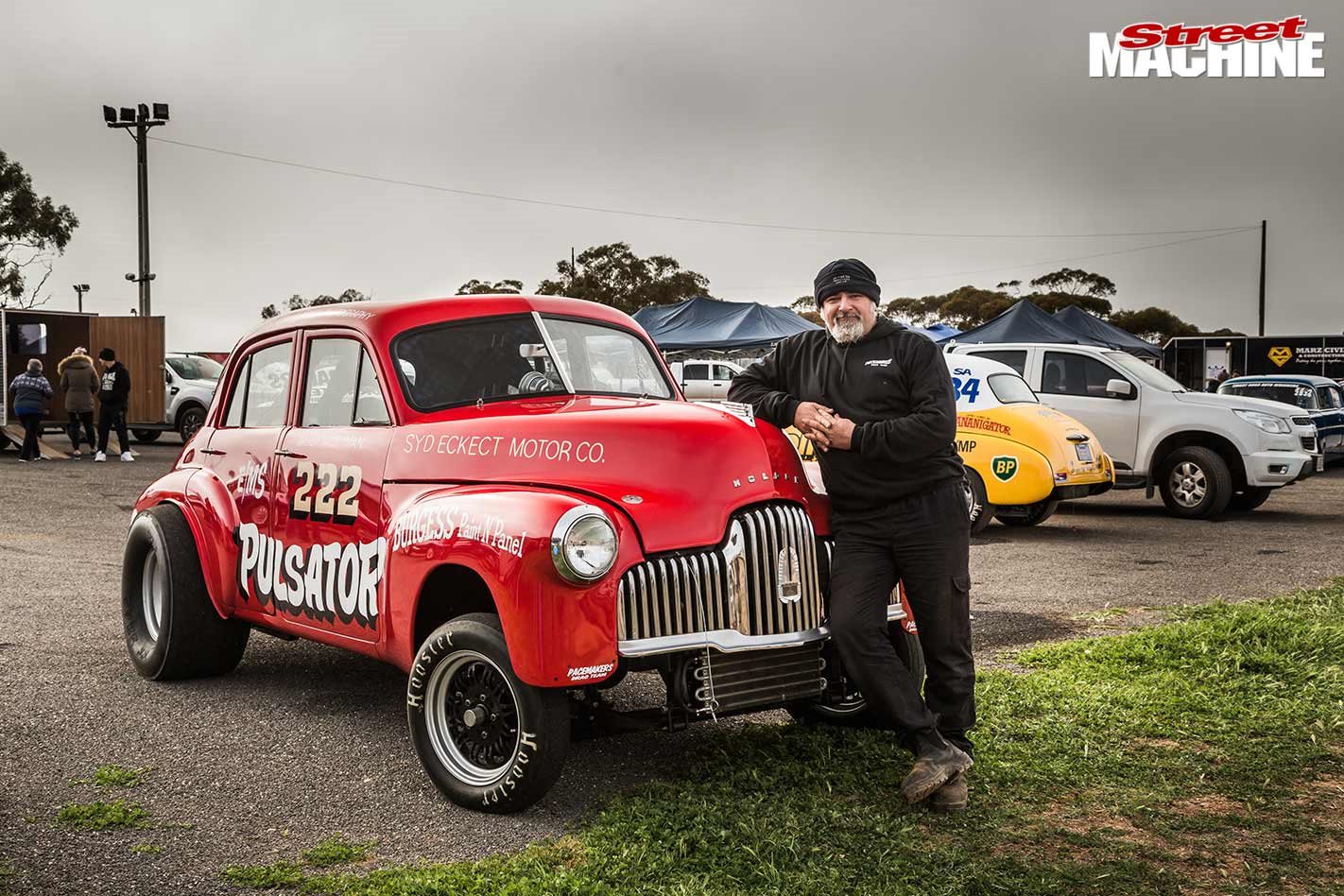 When did you sell Pulsator?

In late ’67. I had just pulled the car down again as I was going to try to knock off the Exterminator, when I was enlisted to go to Vietnam. They ended up knocking me back because I’m partly colourblind, but by then I’d sold Pulsator to the Gerlach brothers. They raced it as the Pulsator; then Harry White bought it when he came back from Vietnam. He put in a red motor with Webers on it and raced it as Dirty Harry for years. 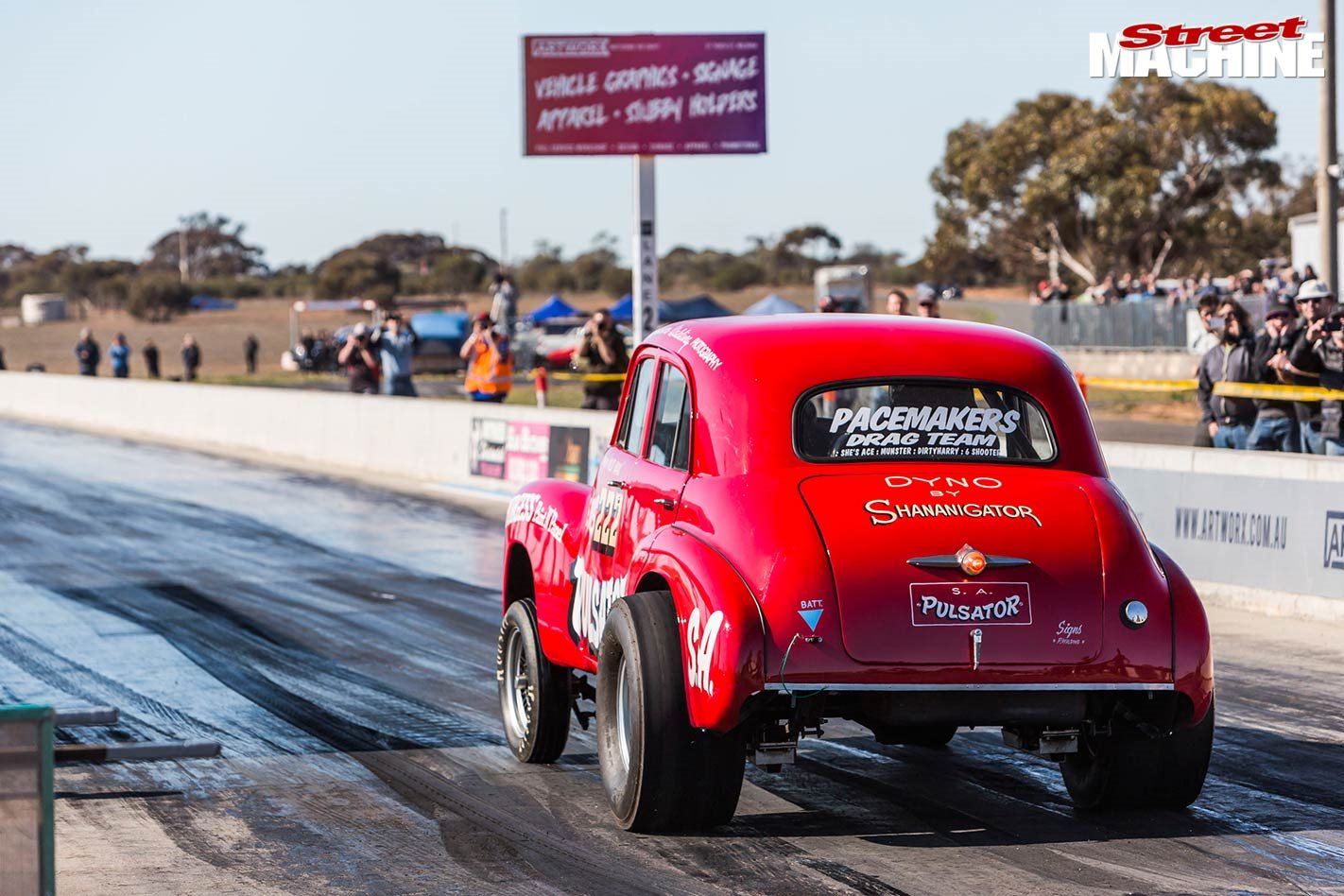 Was that it for your drag racing career? 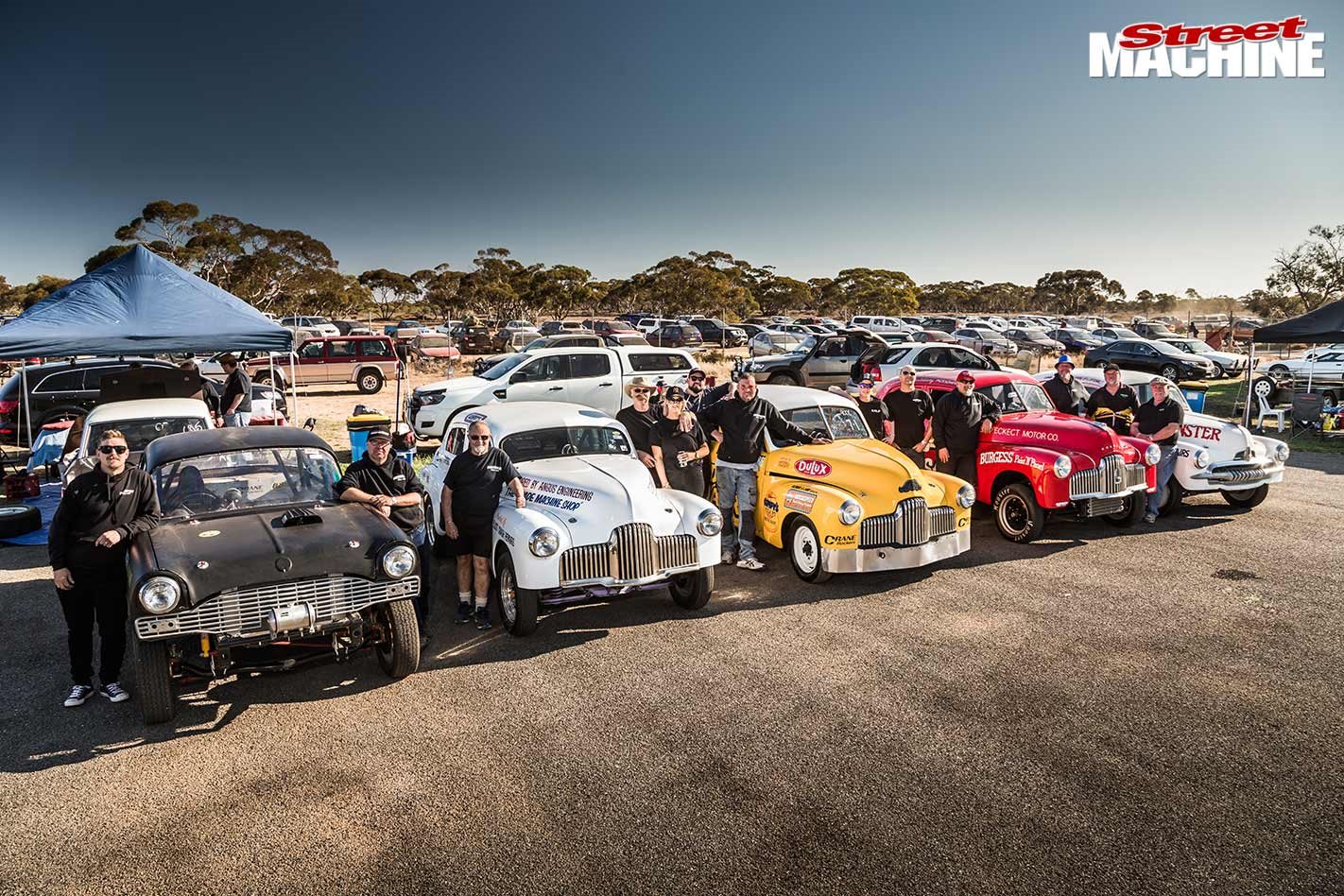 I had known where Dirty Harry was sitting for 20 years. I missed out on buying it, but became involved with the car and brought it to the Mildura Nostalgias last year to be displayed alongside a replica car. I had an FX that had been sitting in my father’s shed for 20 years, so I decided to build a replica of the Pulsator, as I’ve always followed the American gasser scene and wanted to make an Australian version. 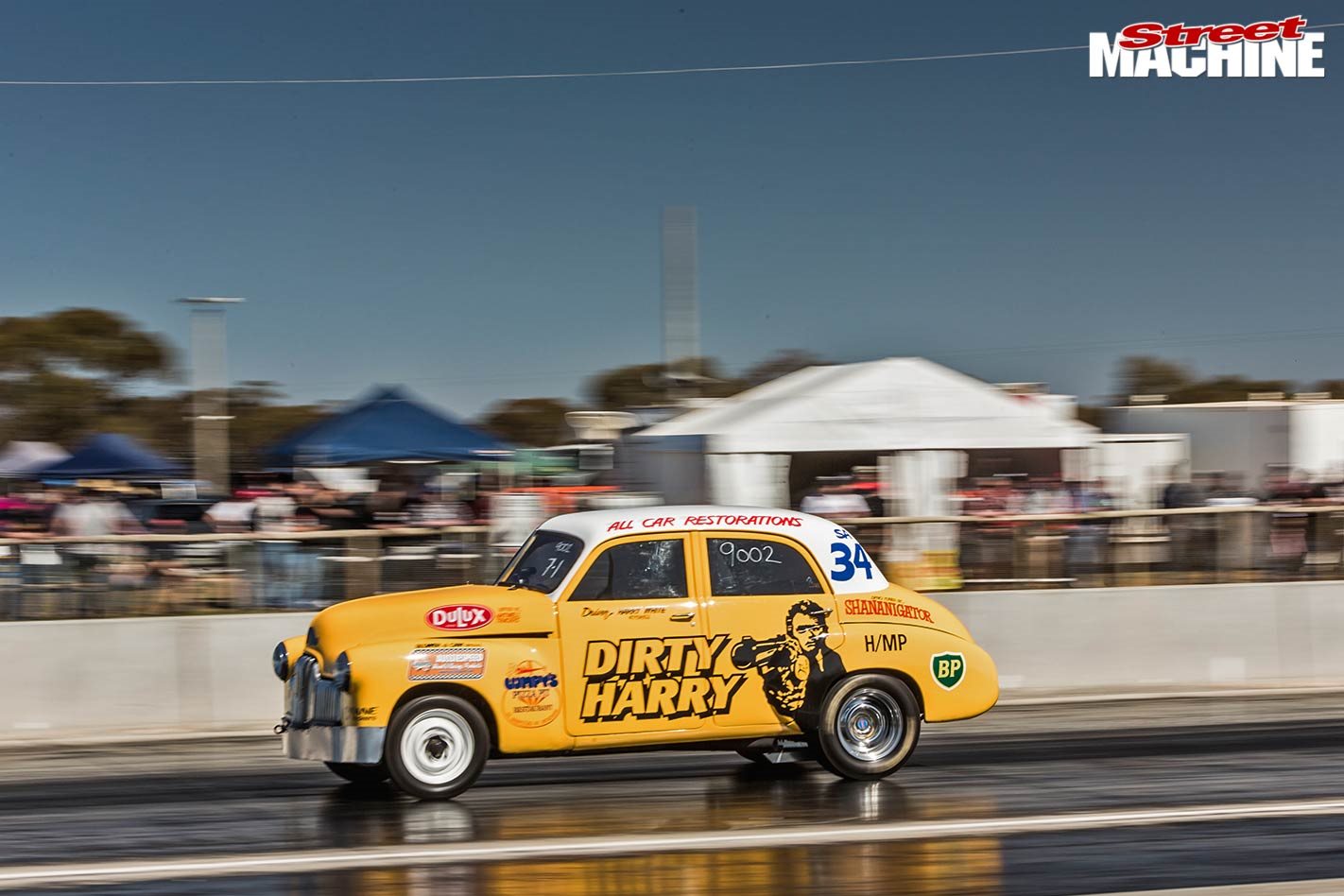 To make it a gasser I put a ’40 Chev I-beam under the front end, building and fabricating everything myself. The rest was all parts that I had sitting around, including the 350ci Chev, Turbo 400, Salisbury One Tonner diff, seats and rollcage. I run steel rims as I don’t have the money for fancy rims; it also has second-hand slicks and front-runners. The only things new are bearings and necessities. Pulsator was built on a shoestring budget. I’m a fitter and turner, but I also did all of the body and prep, then had a good mate at Burgess Paint ’n’ Panel do the spray. My father’s a signwriter, so he’s done all of that based off only two small photos that Graham had given Romano Puntin [She’s Ace replica, SM, Oct ’11]. The signage is almost original, with a few added extras. 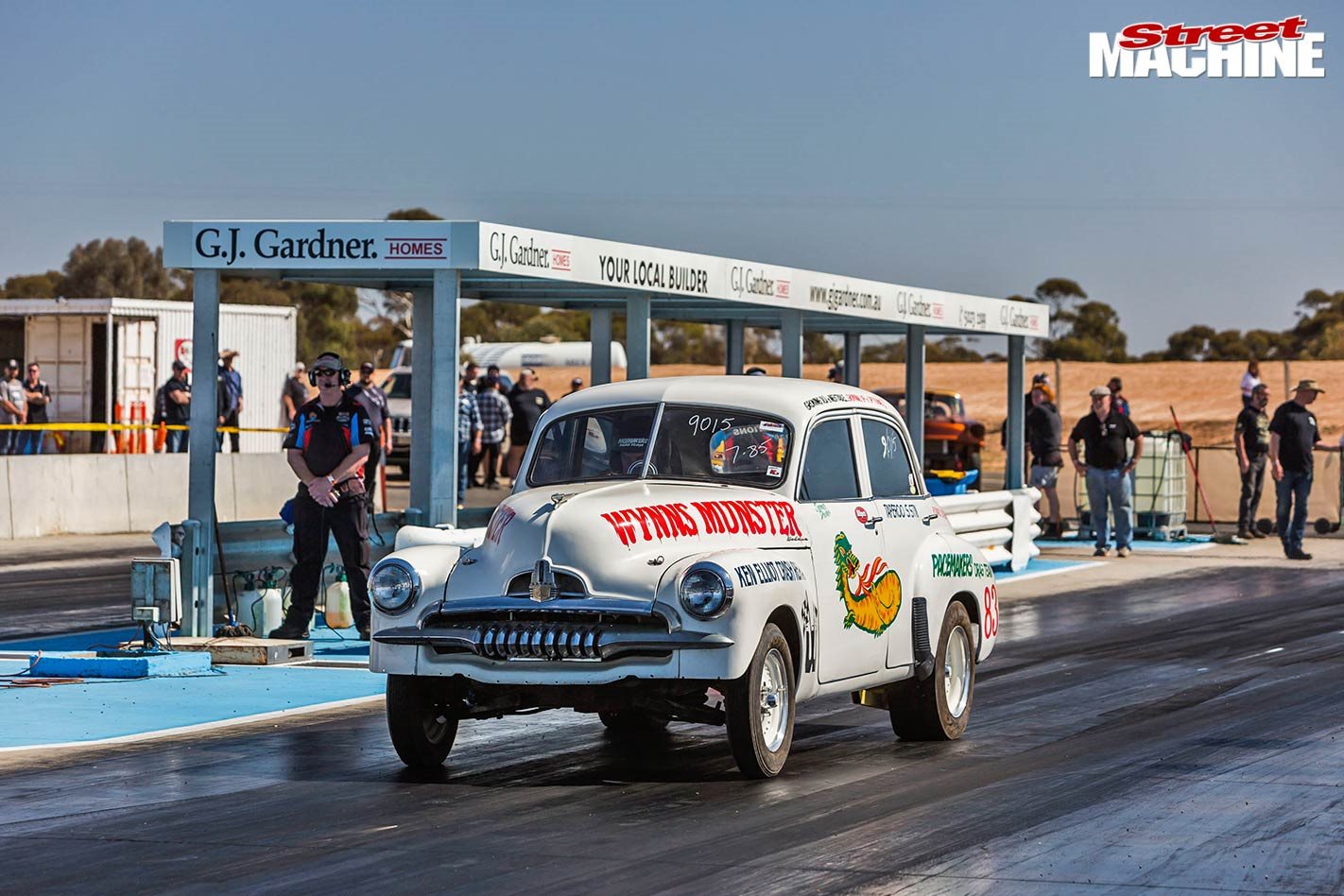 What times did you pull at the Mildura Nostalgia Drags?

I started with an 8.9-second first run; then I dialled in an 8.65 and ran an 8.66-second pass in my final. I won two of my three races, losing the first one due to my low dial-in – I had no idea what I was doing, as it was the first time I’d raced. The vibe for nostalgia drags is really huge at the moment and I’m having a good time with the Pacemakers Drag Team while racing early-model Holdens. We’re not running low quarter-miles but we’re consistent and having fun, and that’s what it’s all about for me. 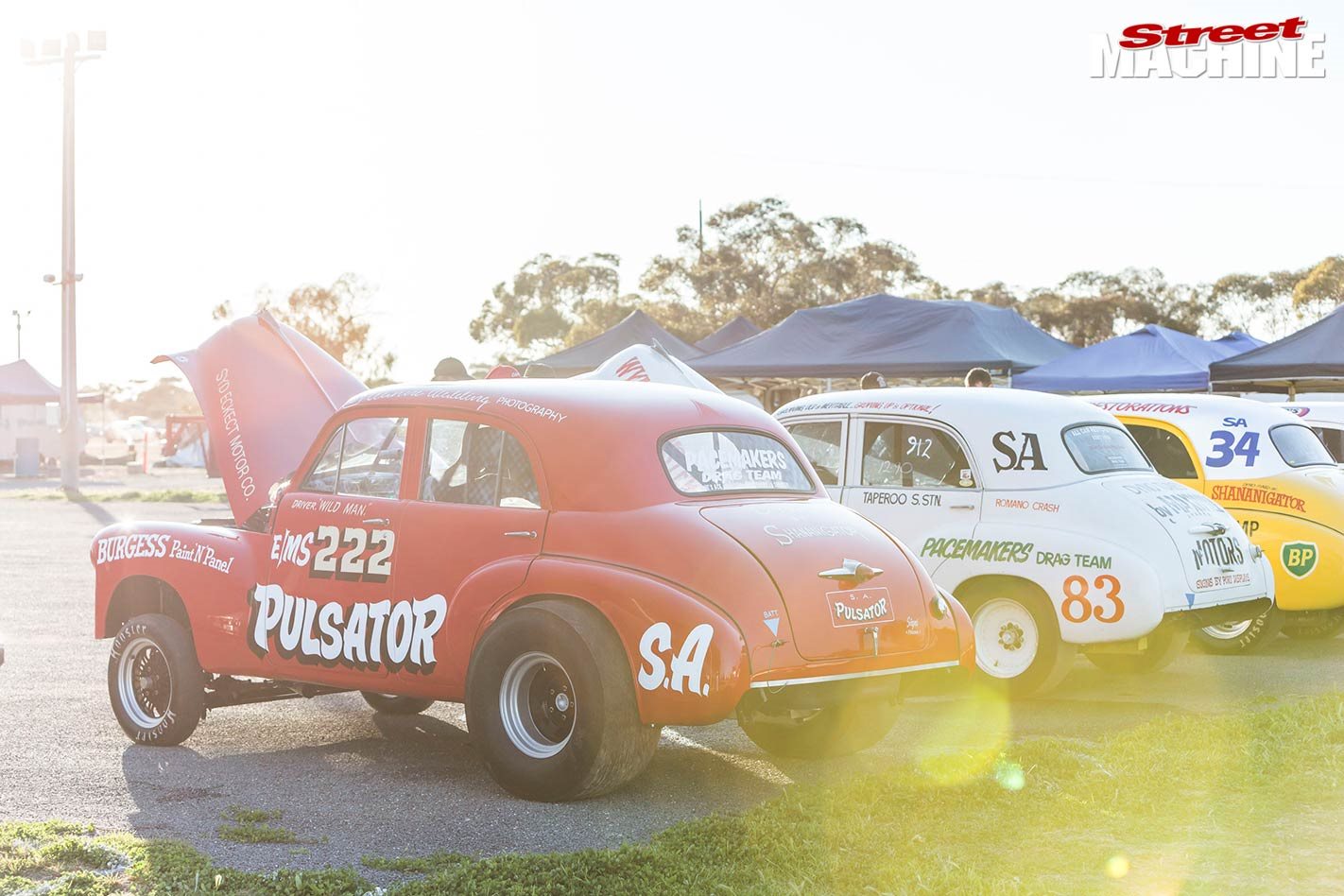 Tell us about the Pacemakers team.

We’re a bunch of blokes headed by Romano and Michael Puntin that have recreated replica and tribute 60s cars from the Brooksfield days: Munster, She’s Ace, Dirty Harry, the Pulsator, and the original Exterminator is coming out soon. We help each other and keep the early nostalgia style of racing going.