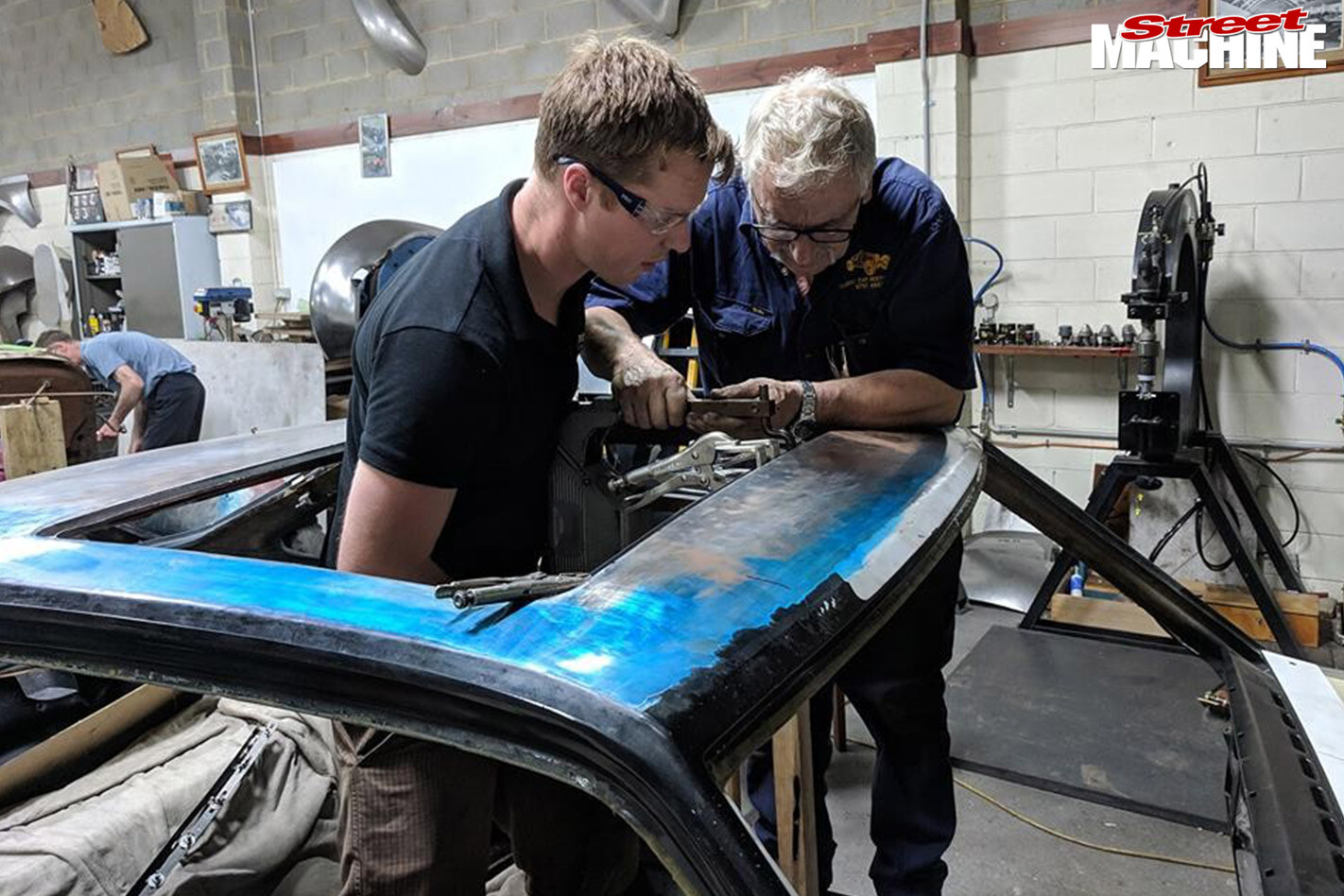 “THIS is my UC Sunbird hatch that I’m turning into a modified A9X mock-up. I’ve been slaving away on it for six years! 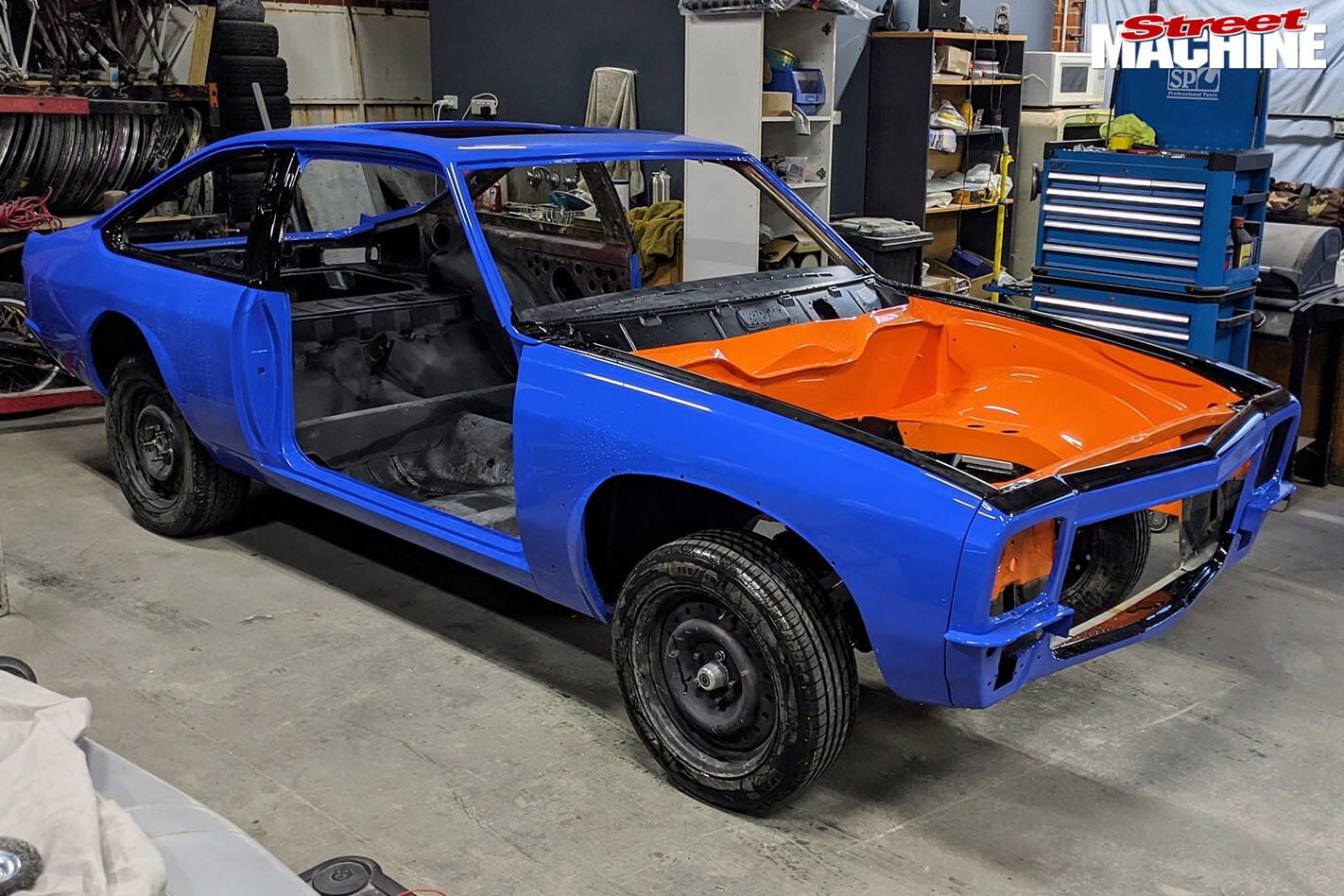 It has a 383 Holden V8 stroker, TKO600 ’box and a full-floating BorgWarner diff with custom three-link rear suspension. It runs big brakes all ’round, and I’ve put a lot of effort into reducing weight and strengthening the chassis. 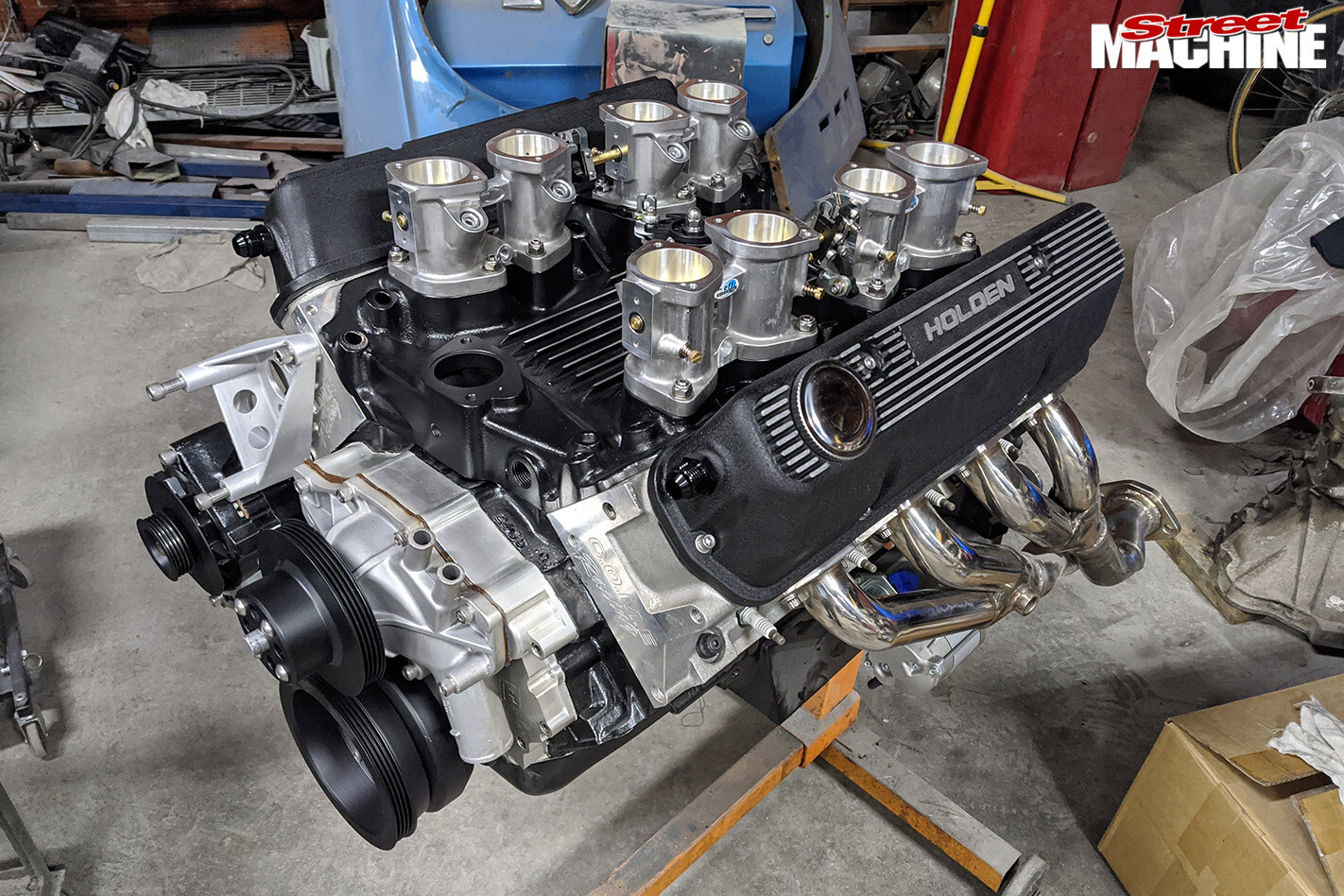 It will have a wild colour combo and interior, with my inspiration being Summernats circa 1989. I can’t wait to finish putting the puzzle together.” 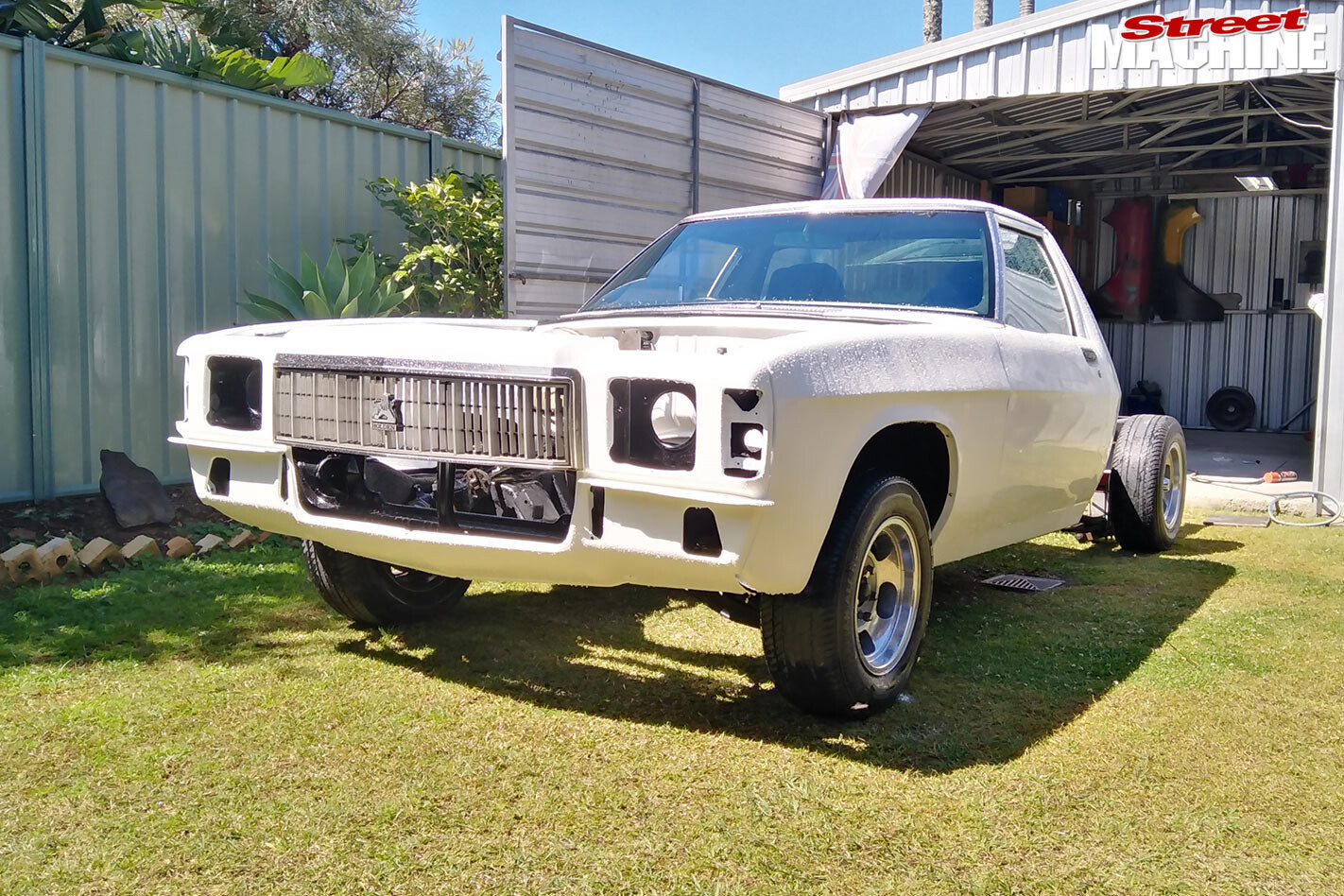 “MY HZ One Tonner has been in the family for over 25 years. It has already been rebuilt twice, so this third time should be the treat. I’m building it slowly at home by myself, doing all the paint and panel and so on. I’m not far off finishing it up, with a 383 V8, TH350 ’box and a nine-inch, so it should have a bit more go than the old 186!” 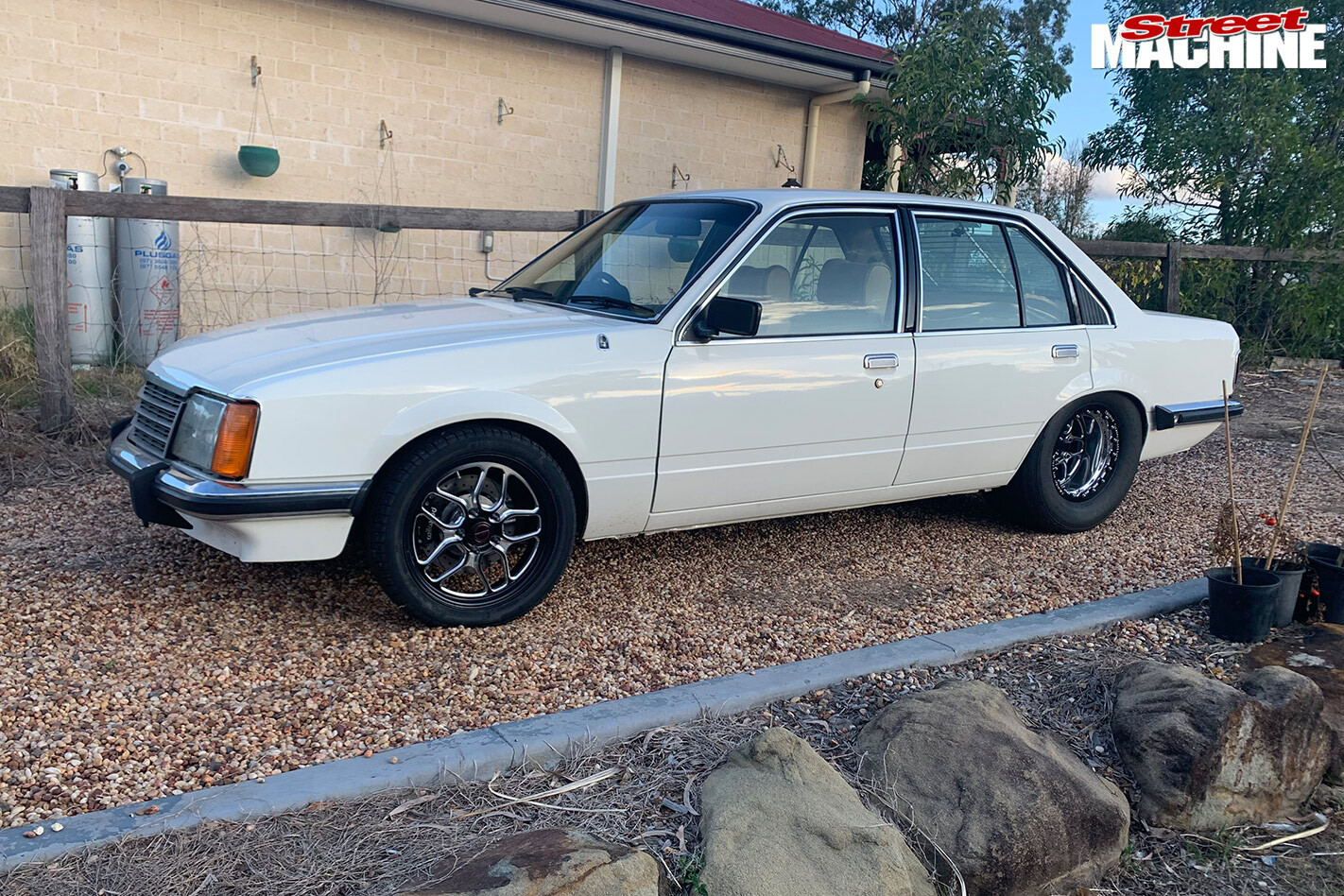 “I’M building this 1980 VC Commodore SL mainly for roll racing. The car is now 99 per cent complete. The last thing on the list is to get the rollcage installed and get it ready for tech. It’s tubbed, and runs a built 6.0-litre LS with a Proboost turbo and Holley EFI. 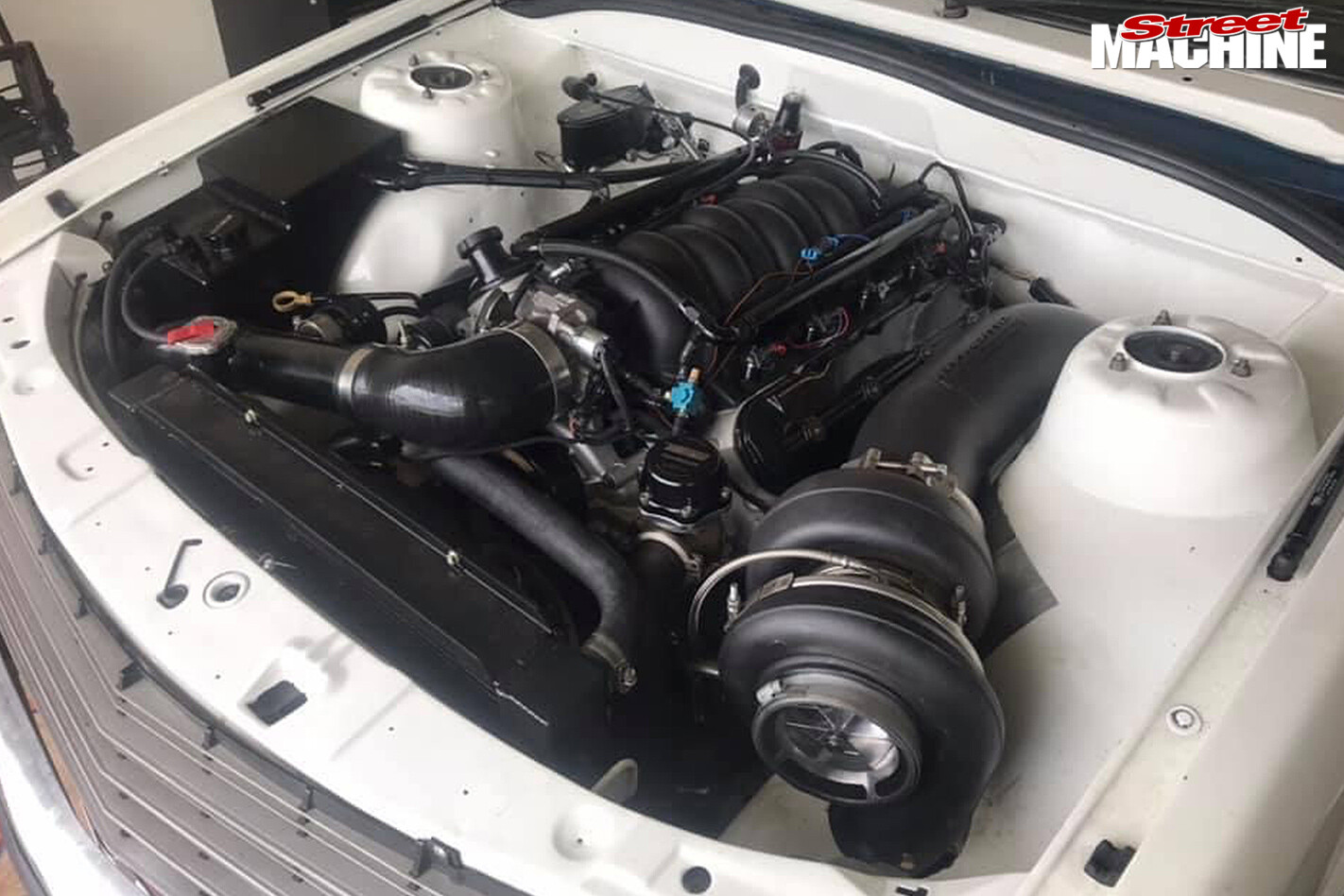 The driveline is completed by a Powerglide and a nine-inch in the rear. It made 1074rwhp on 23psi, with most of the build documented on my YouTube channel, Built By Juz.” 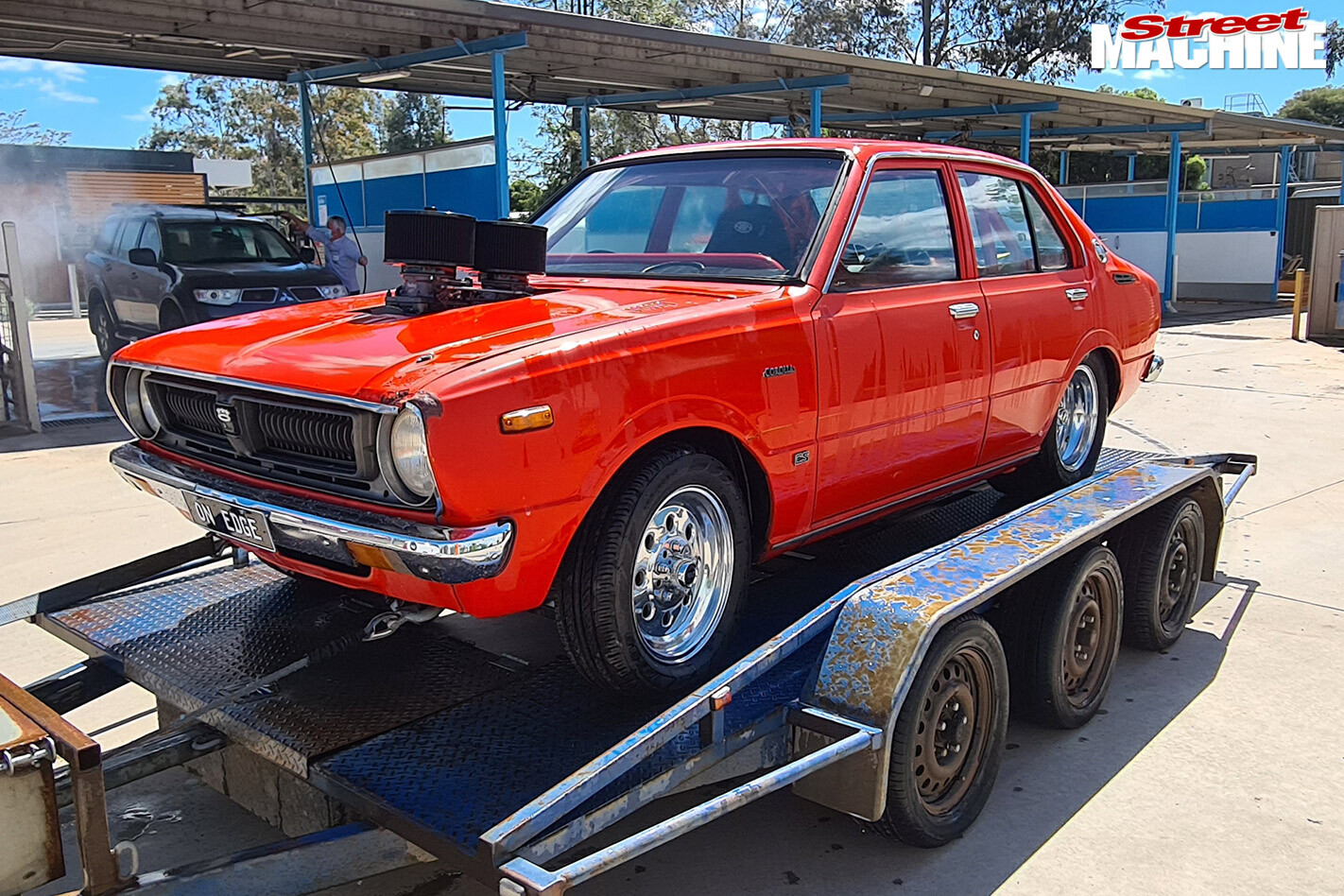 “THIS is my LS-swapped Corolla that has been in the build for about three years now. My mate Rick Turner has been helping me with the build, and another mate of ours, Jayden Snoodyk from Executed Fabrications, did a bunch of the fab work for us including the rear tubs and rear clip, along with all the sheet metal. 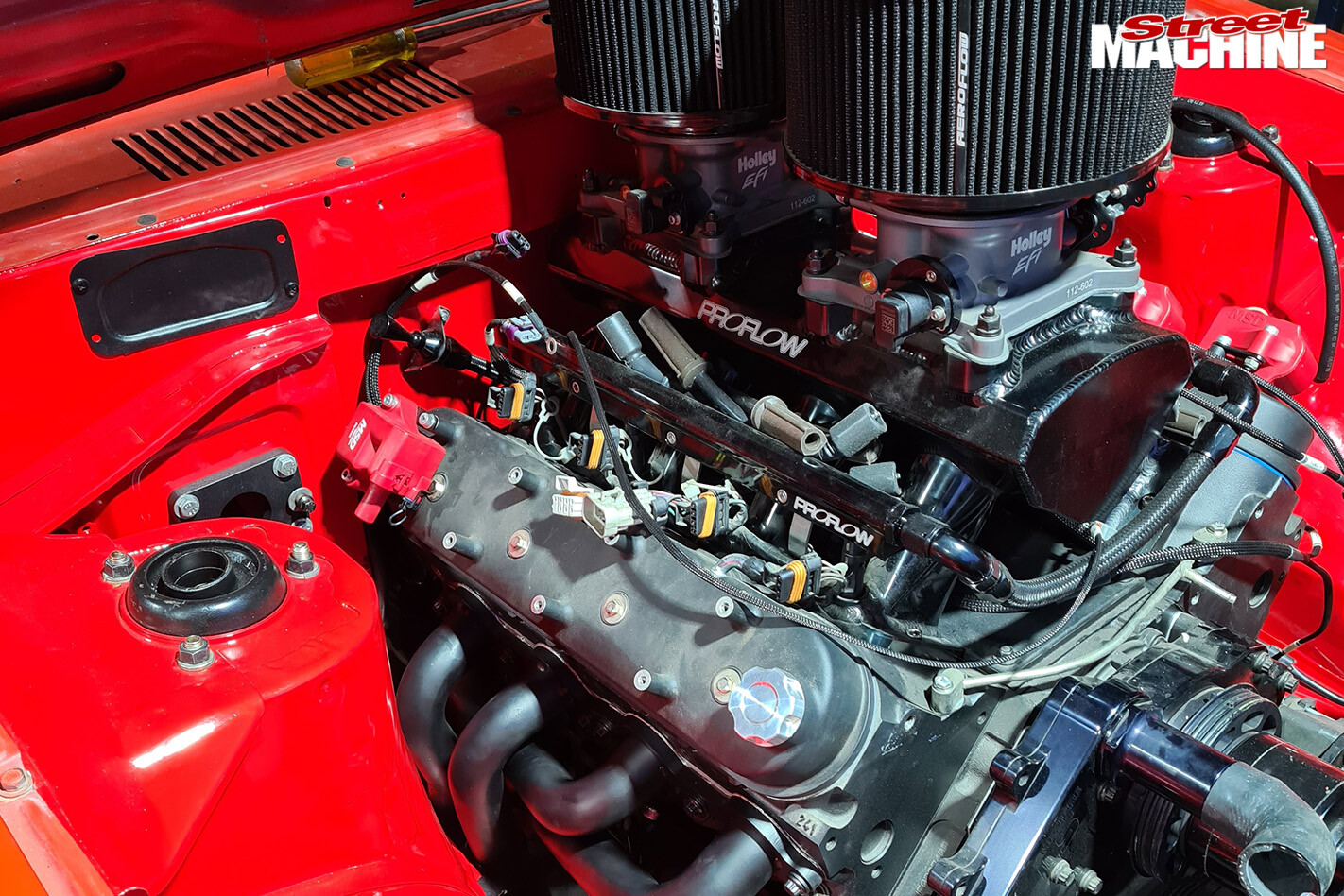 The rear end set-up is a four-link nine-inch with 31 -spline axles, and it’s running bigger 295/55R15 rubber on the back. Underneath, it has brand new rails from front to back, and inside is a six-point rollcage and a custom dash. 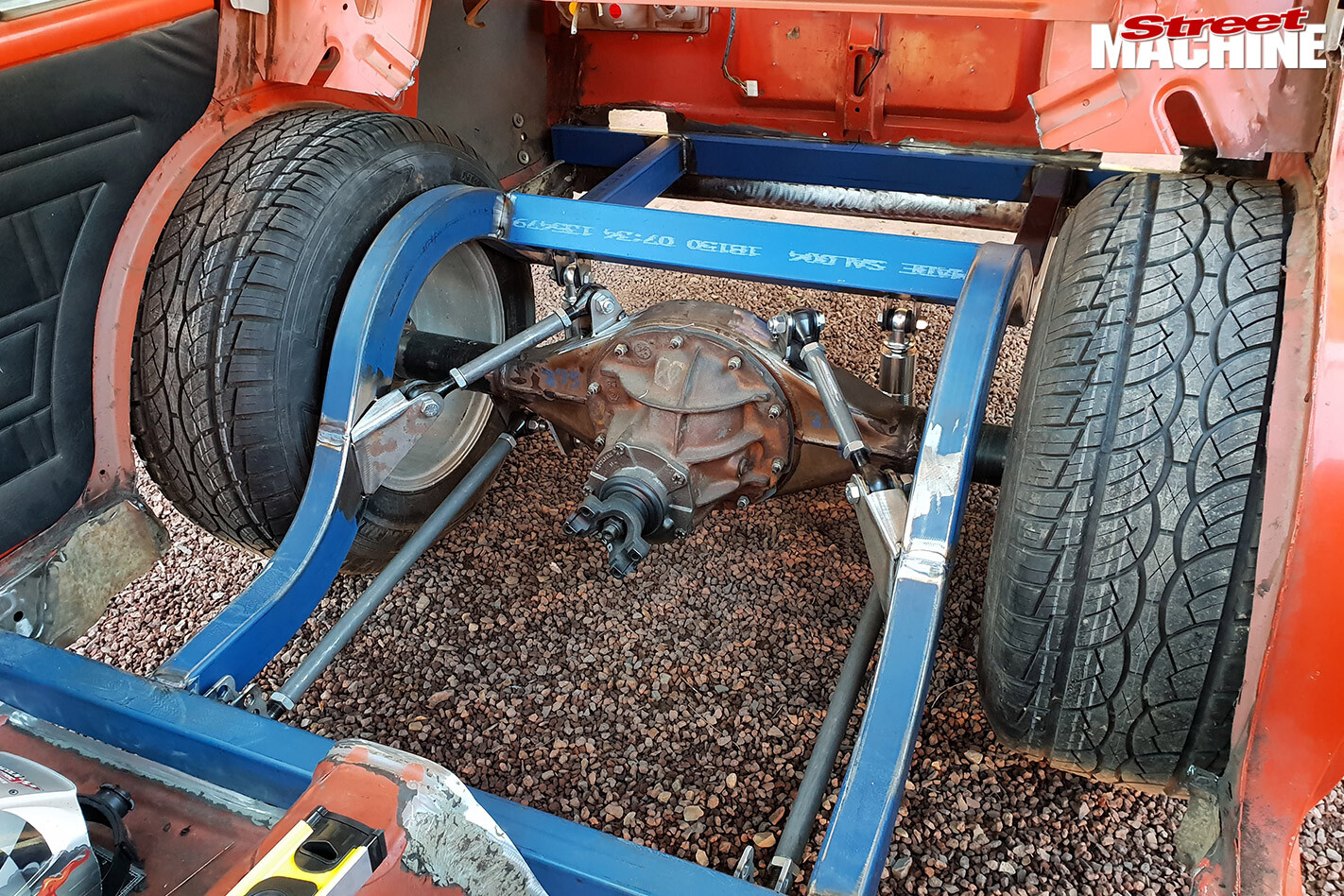 We’re using a two-speed ’Glide, and the donk is a standard-stroke LS1 with H-beam rods and forged pistons. We chucked the biggest valves you can squeeze into the 241 heads, which we hand-ported and decked 40thou, along with a beefy cam. 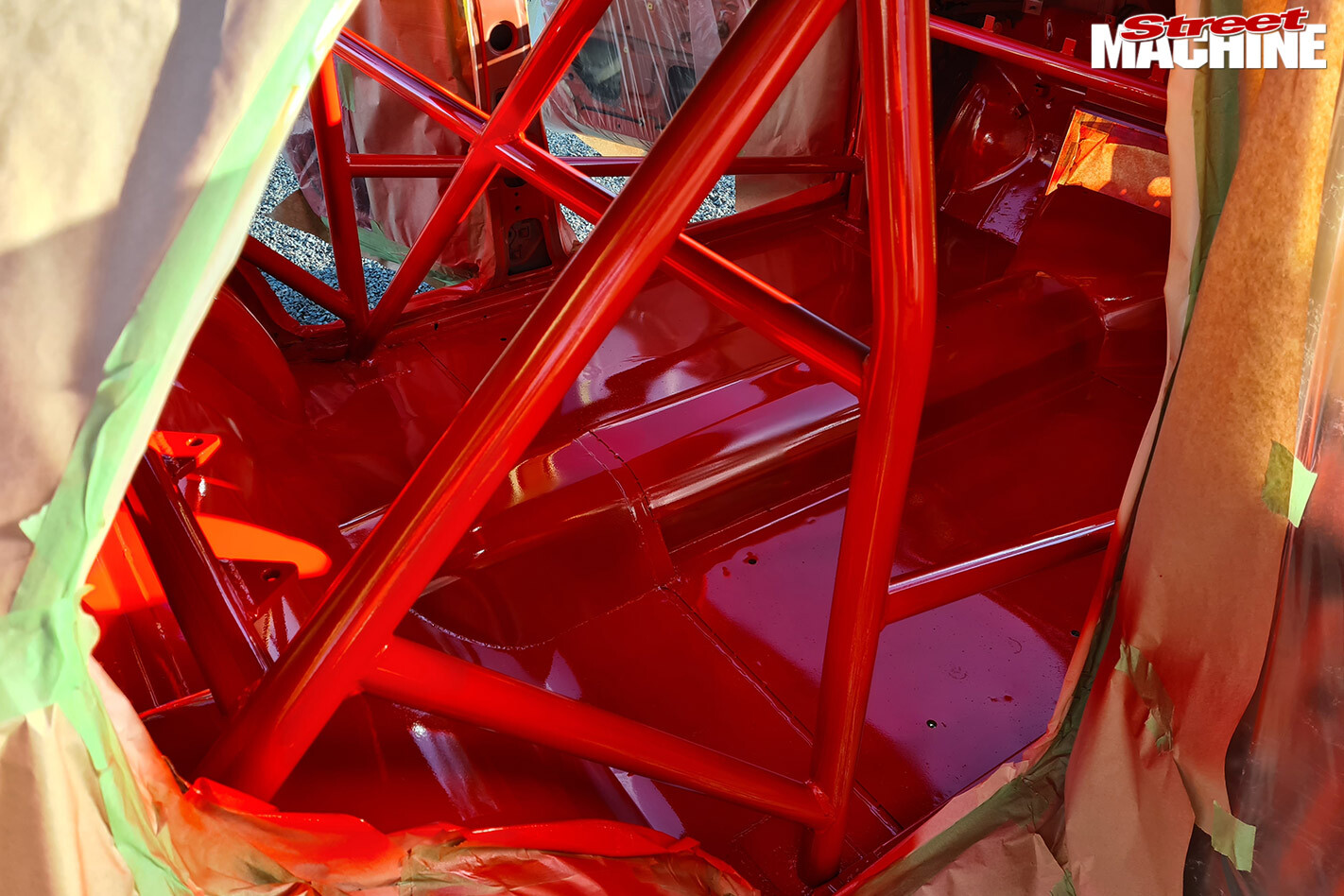 Topping it off is a Proflow inlet manifold with two Holley EFI throttlebodies sticking out of the bonnet.” 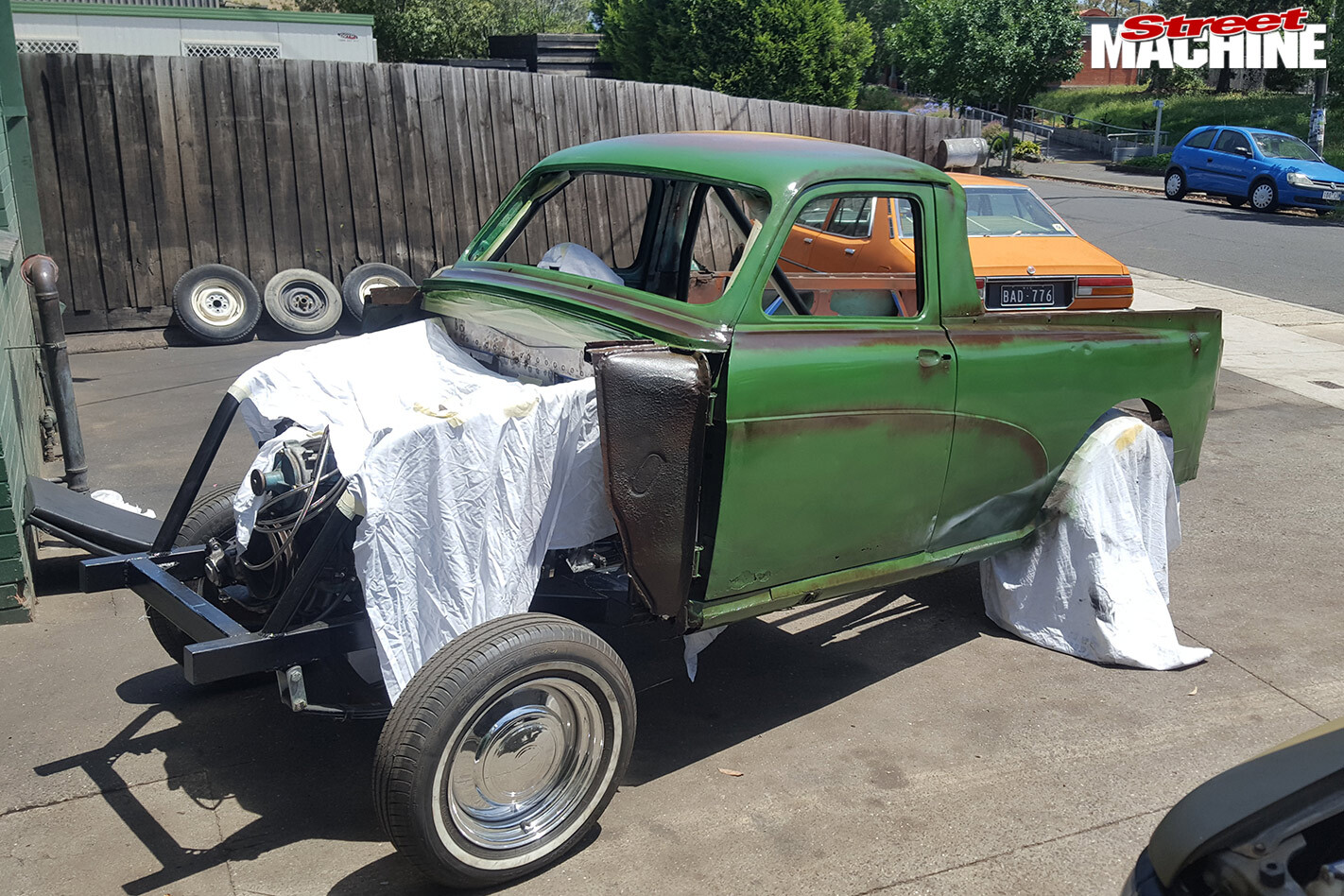 “I BOUGHT the Austin as a shell with a bunch of spares in late 2017 with the sole purpose of building something for Chopped, which didn’t eventuate. The shell sat at my house gathering leaves and more rust, but it finally got dragged out around Christmas time that year to start chopping into it, with the aim of getting it to a rolling chassis. 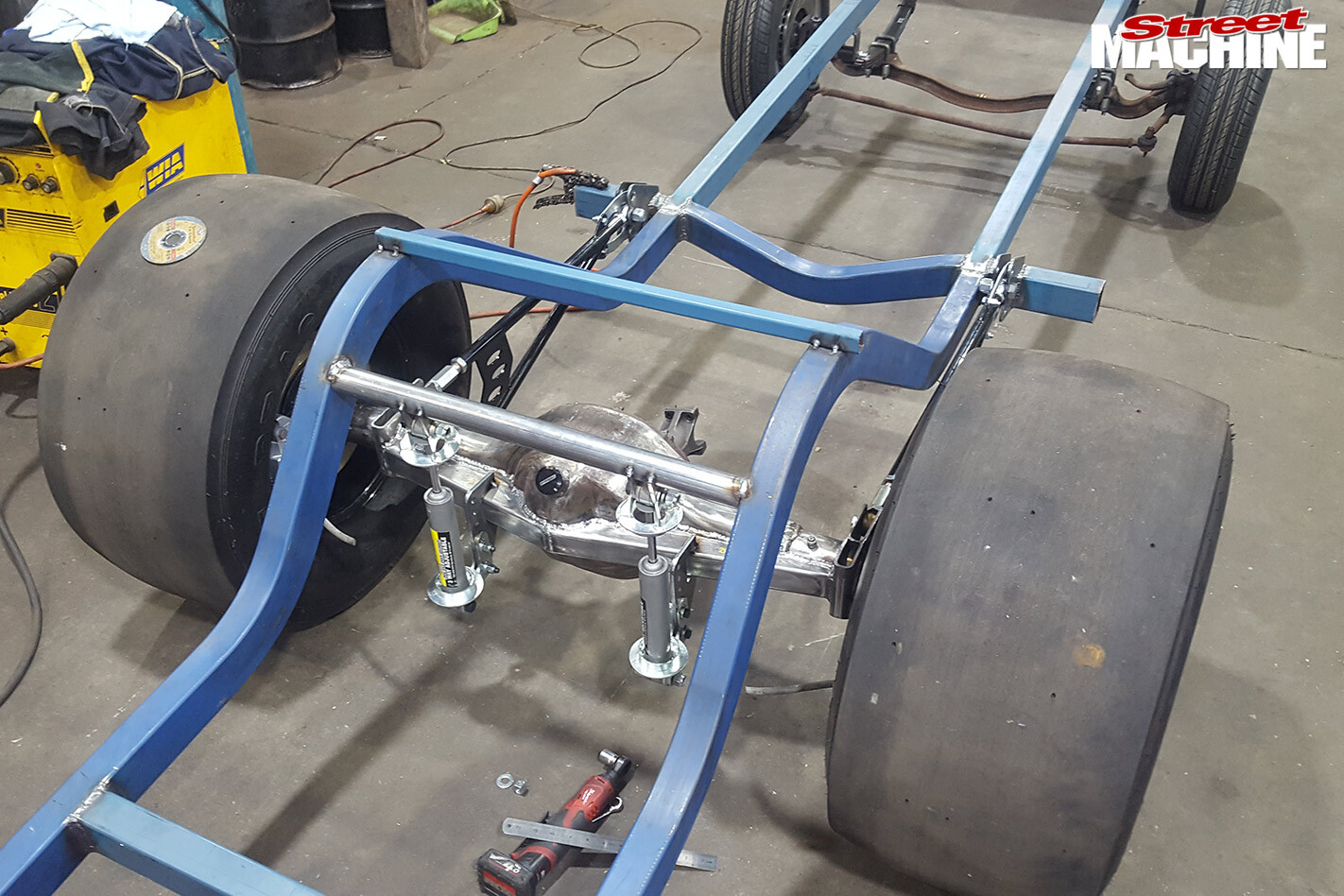 Over those holidays we got most of the floor and unnecessary body bits cut out, and I put my first-ever basic box chassis together. After many holiday beers, we had a roller. At this point we were aiming for Chopped 2018, which unfortunately also didn’t happen. Eventually we got wind of Throttle Stomp being held in January 2019, and the crunch was back on. 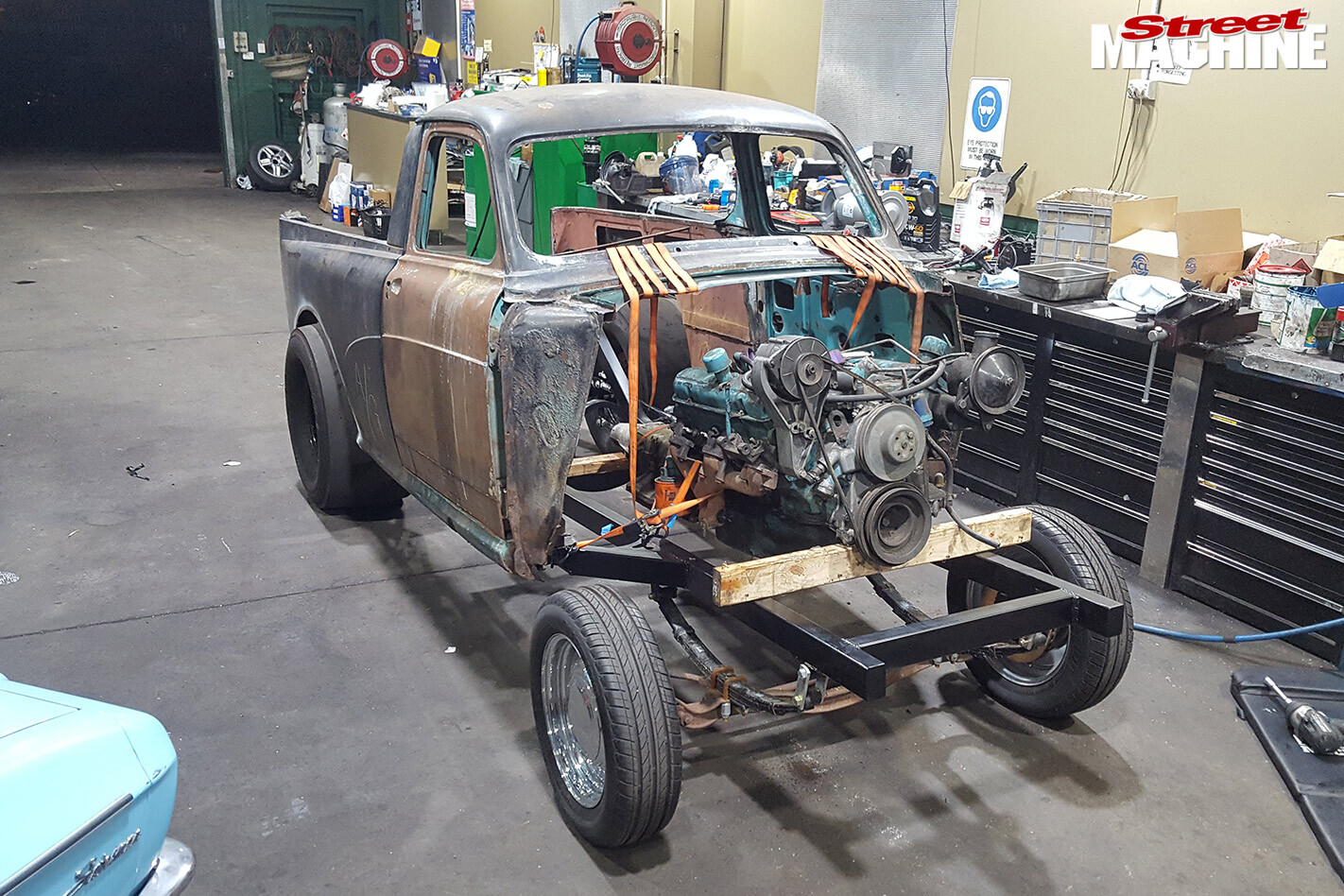 The build saw many late work nights and weekends to make the deadline, including an action-packed thrash working through the Christmas holidays right up until about 4am the morning of Throttle Stomp. We had no shortage of stupid problems along the way, but we made it there. Thankfully they let us have a blast on the dirt, and it was all worth it! That fired me up for another year of working on it whenever time permitted, and finally we made it to a Chopped with a car to play with – that was everything! 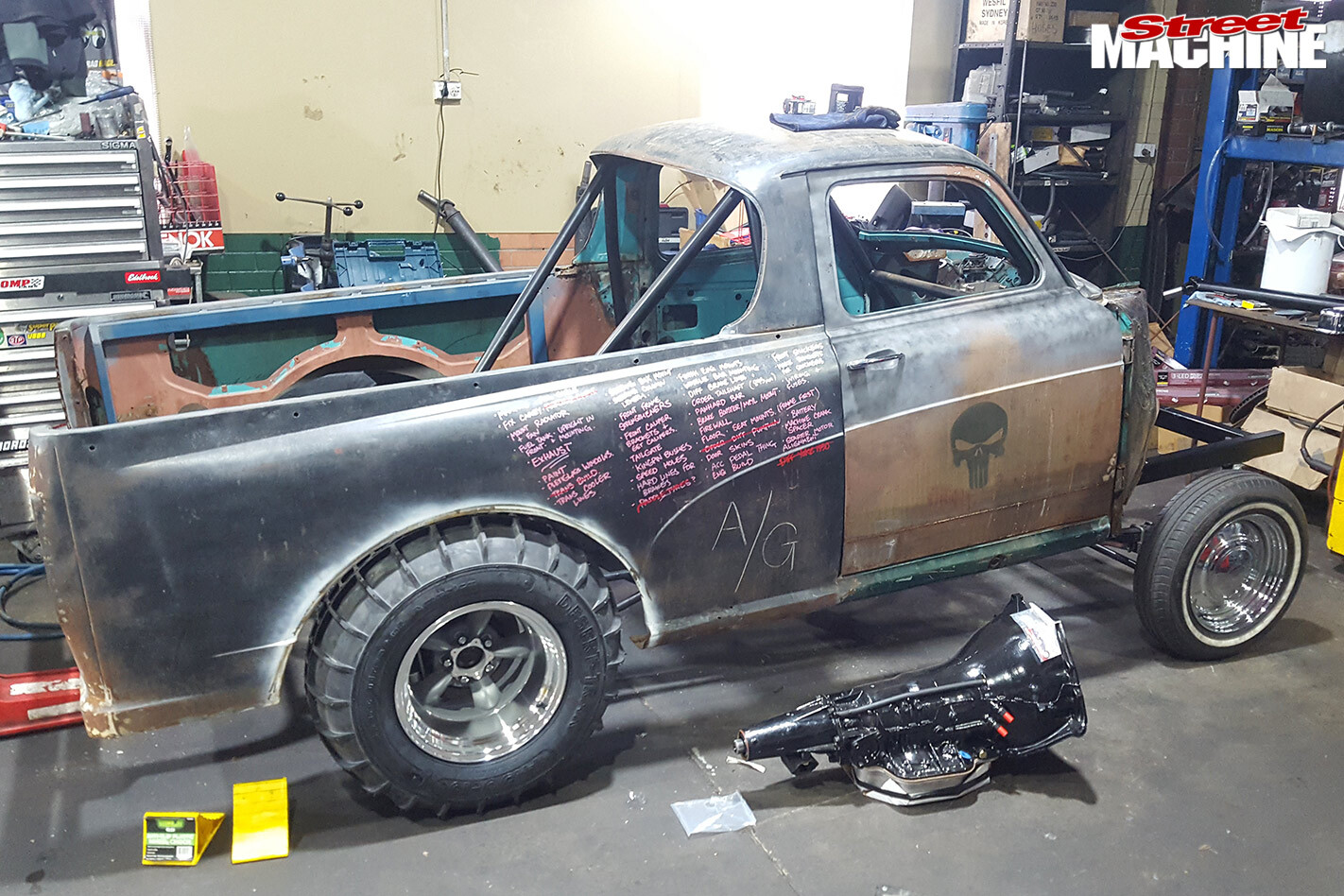 Since then I’ve ditched the Honda Civic radiator for a larger V8 one and retired the fire extinguisher fuel tank in favour of a larger tank made from a keg. Next on my list is fixing the crazy play in the kingpins, fitting my new diff centre with 4.11:1 gears and hopefully putting in the rear tubs I made.” 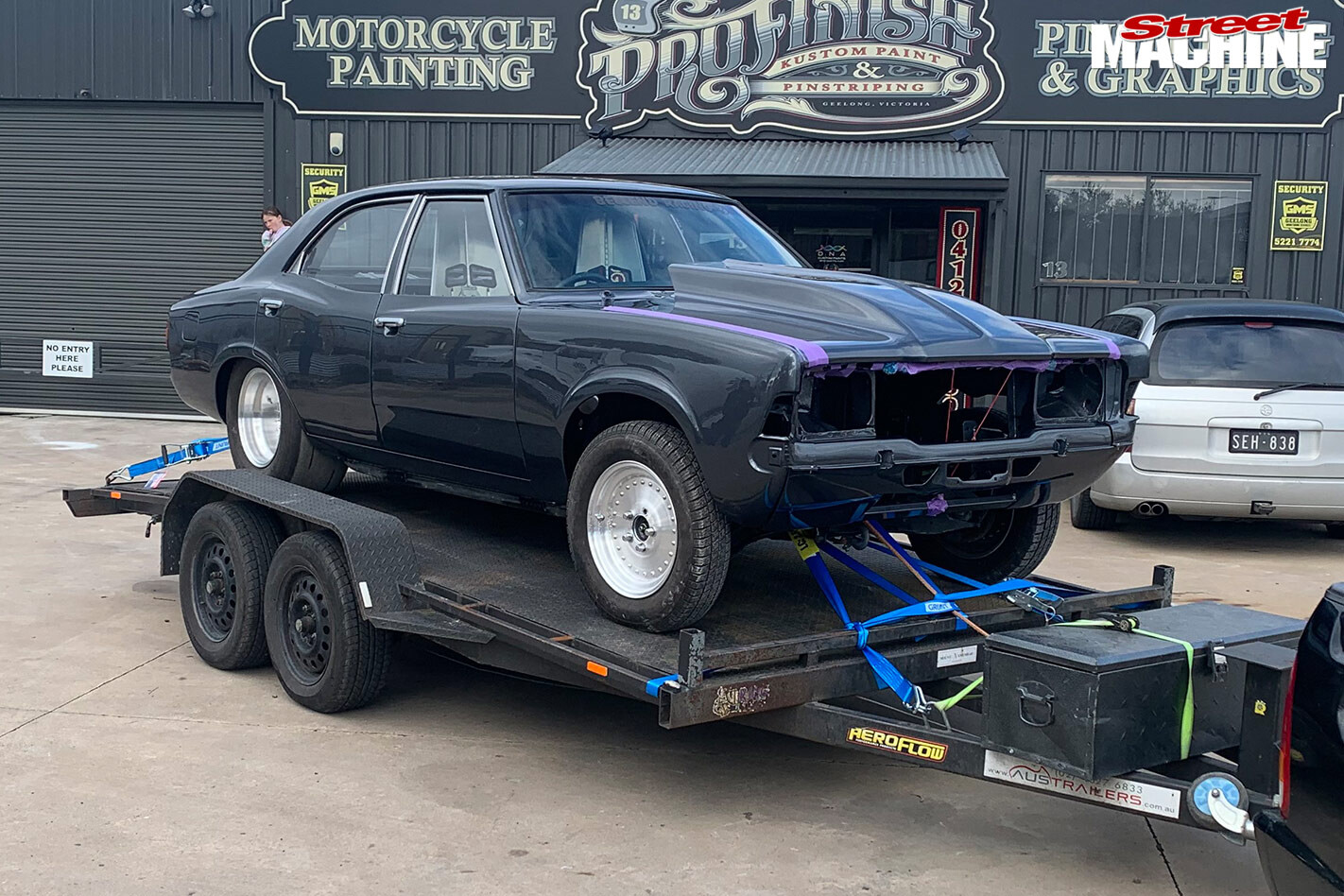 “I HAVE been building and racing my TD Cortina for around eight years now. The first incarnation was a nitrous Cleveland combo with a Powerglide and so on. It ran okay, but it had some suspension dramas that wouldn’t get me into the eights. I pulled the car apart to fix an oil leak and found a cracked block, so I decided to step the car up in every area. 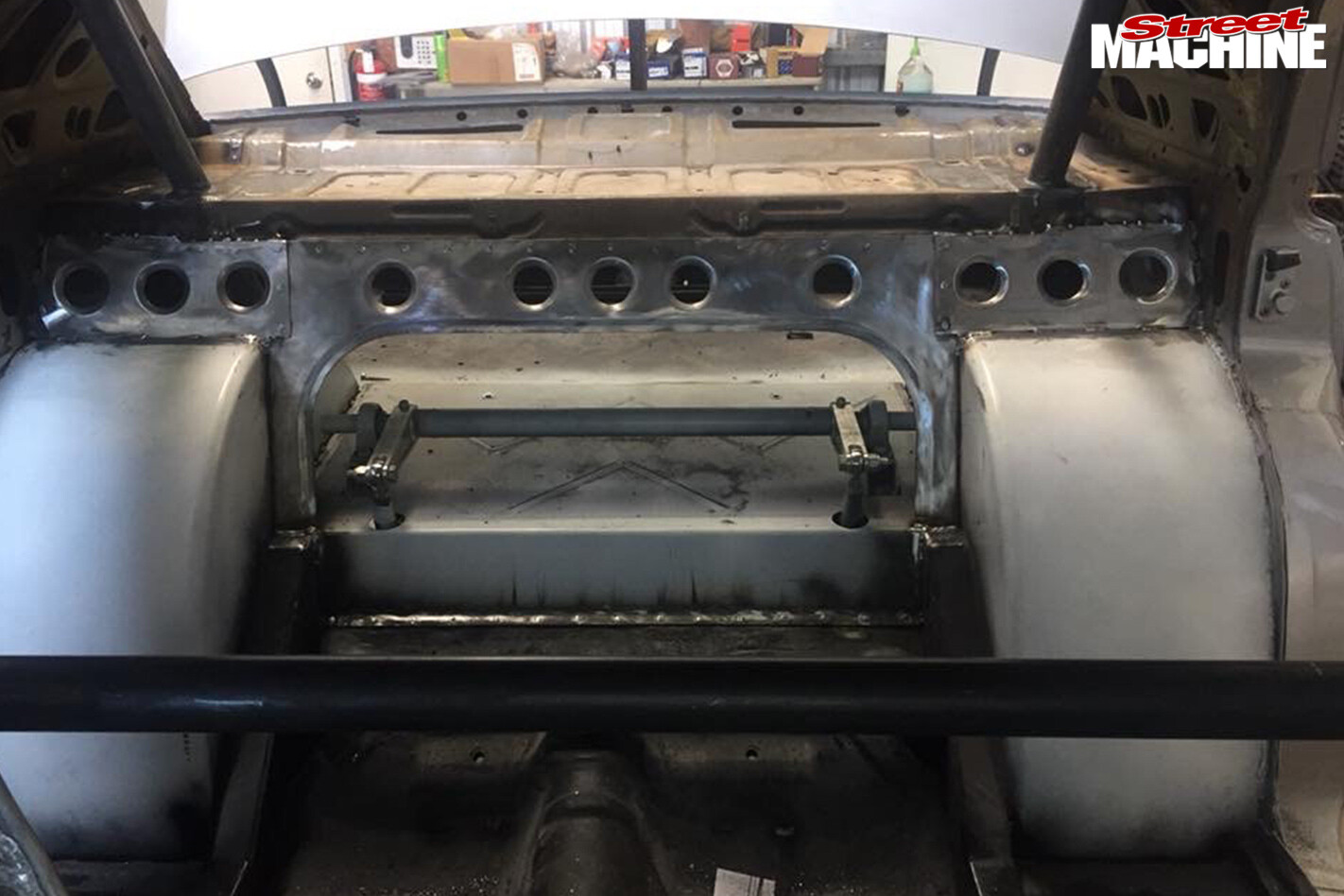 It’s getting close to being finished, and I will be keen for a run at Street Machine Drag Challenge with my mate Harry Haig, and I’d also like to get to Summernats. The new combo is a 410-cube Windsor with CHI heads, Holley Dominator EFI and twin Precision turbos. It’s now dark grey, painted by my mates Shannon and Keith at Pro Finish. 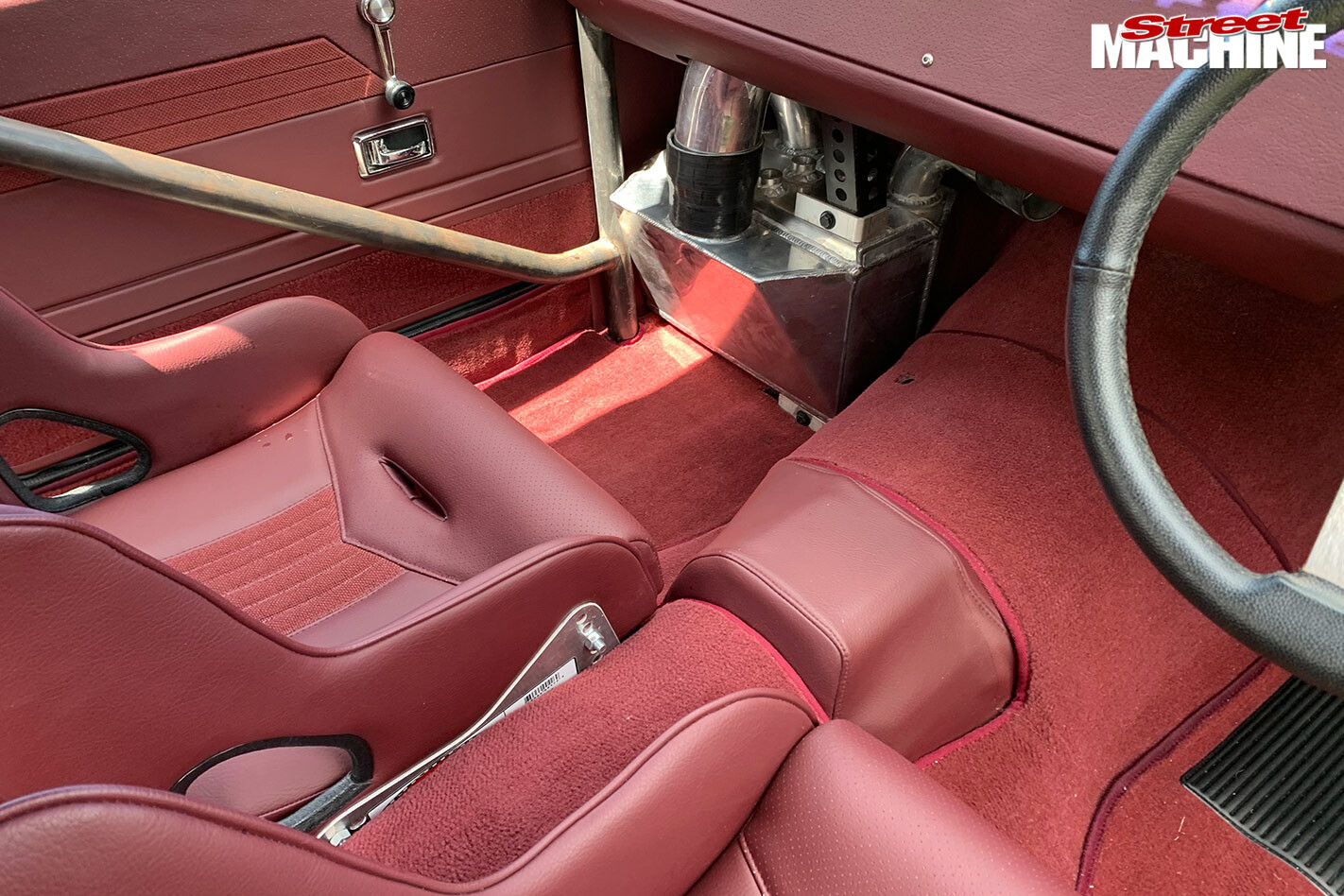 The interior was done by Matty at Inside Rides, while another mate, Luke Lingard, handled the chassiswork. I built the car’s first incarnation in around 10 weeks, doing everything myself including the engine, Powerglide, wiring, fuel system and all the panel beating. But then I wanted to step it up and build a finished product good enough for shows and with enough horses to run low sevens. 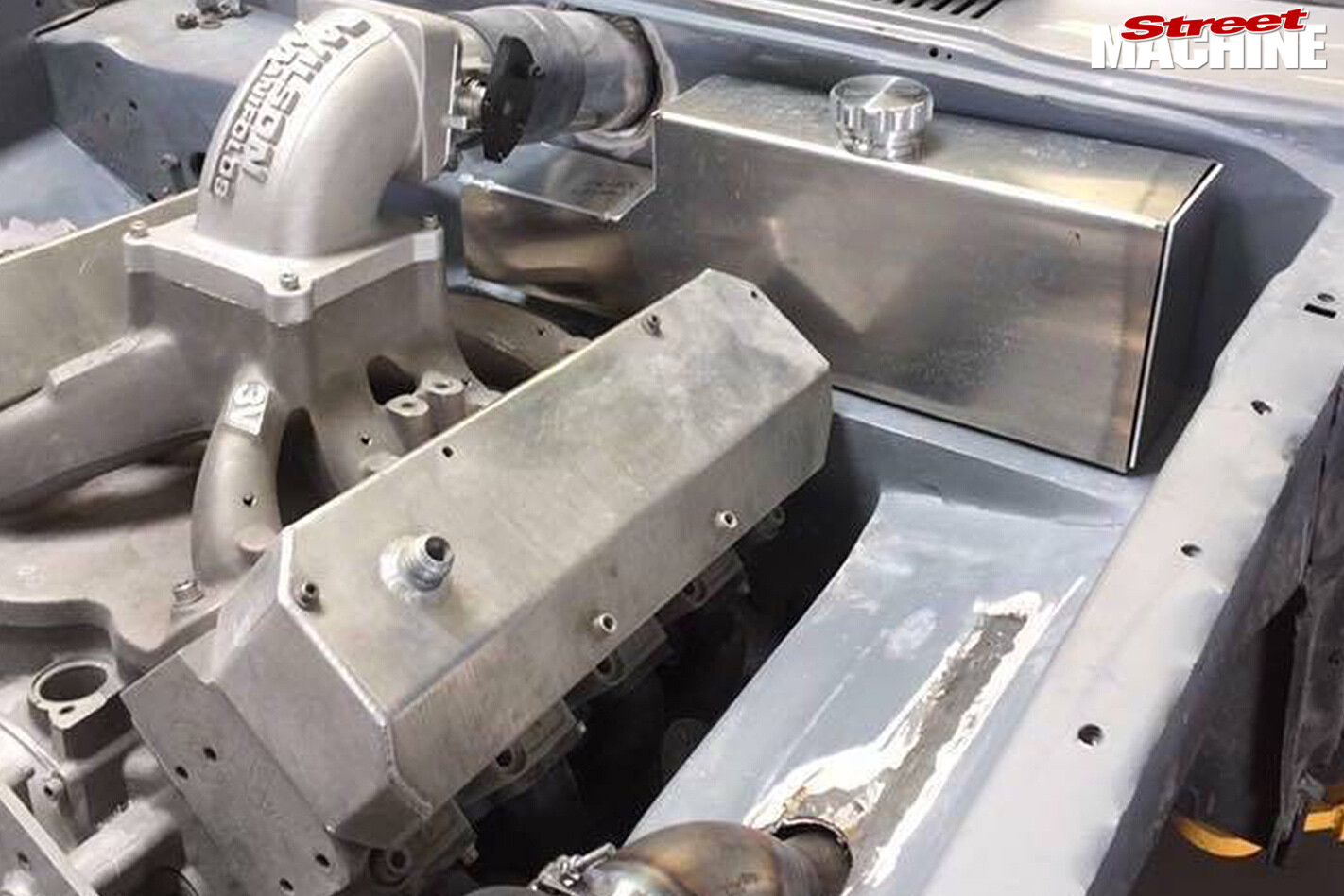 It’s fitted with polished Weld V-Series rims, and now I’m waiting on the engine to come back from Robby Abbott for me to wire up and tune.” 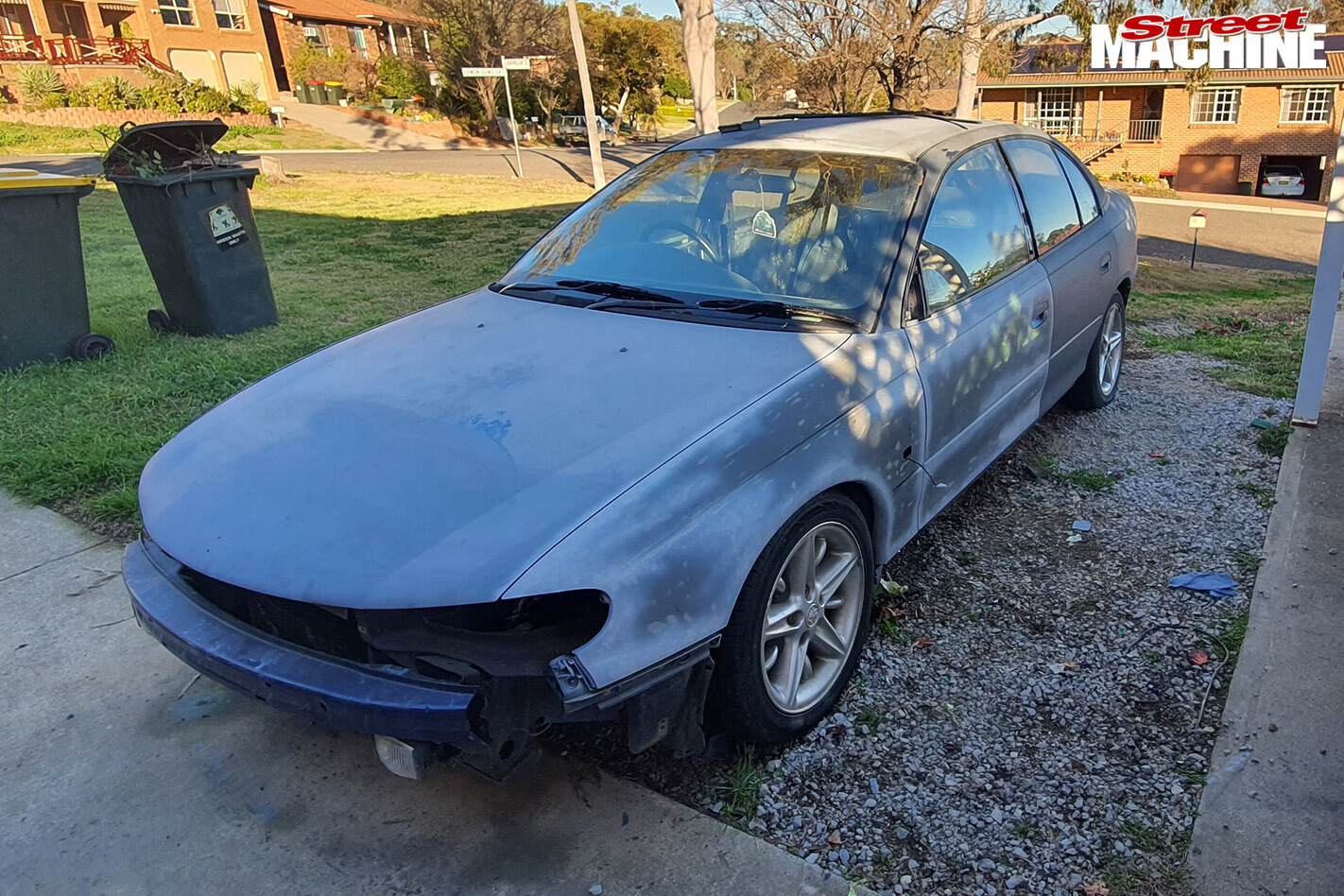 “THE first of my current projects is a VT Commodore that I’ve owned for about 10 years and always wanted to take the next step with. A couple of years ago I started off by fully rebuilding the engine, with some work left to go. 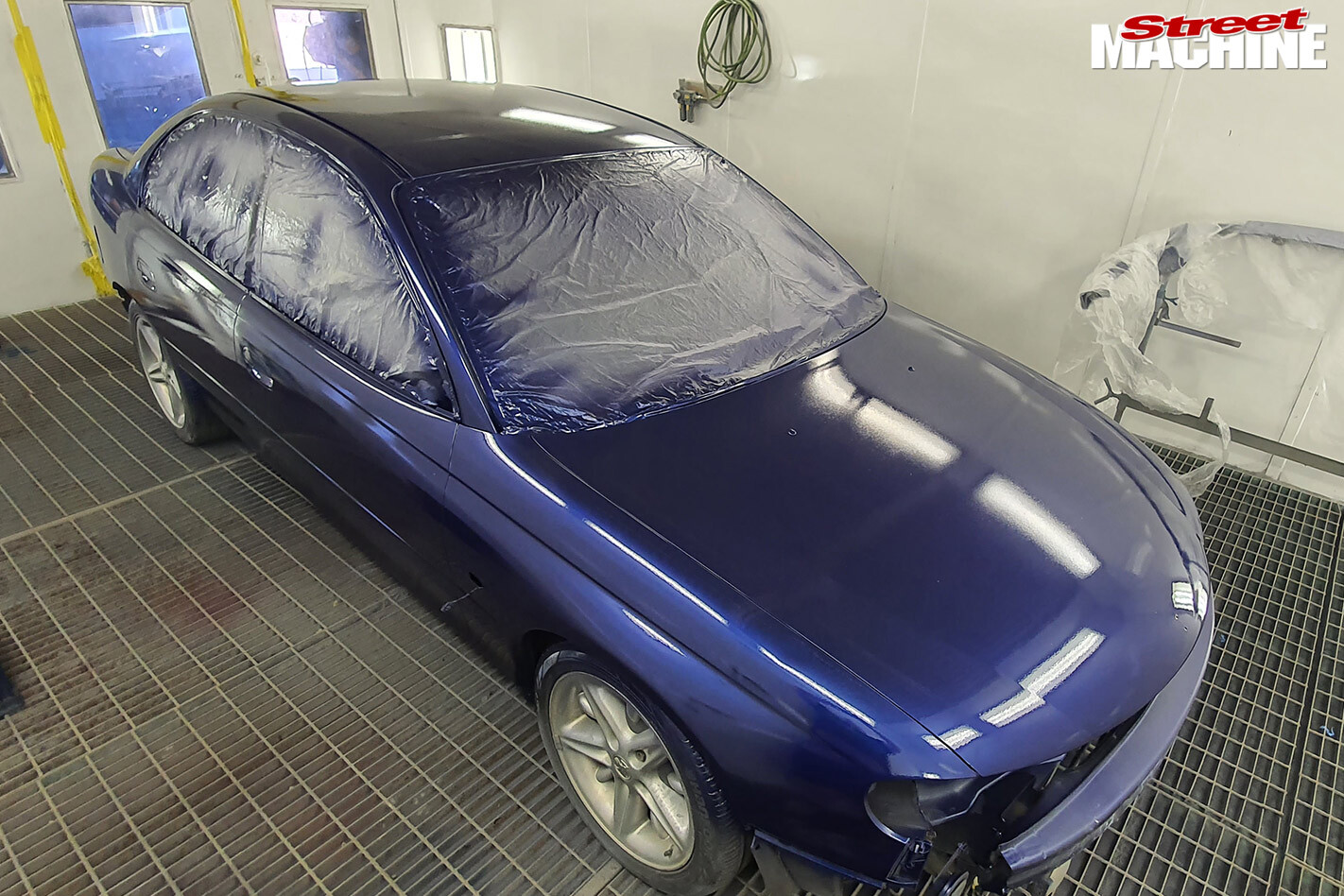 With COVID keeping me at home last year, I decided to dive in and paint the car myself. I’d never touched a gun before, but I sanded her down, gave her a lick of paint and now I’m up to the wet sanding stage. 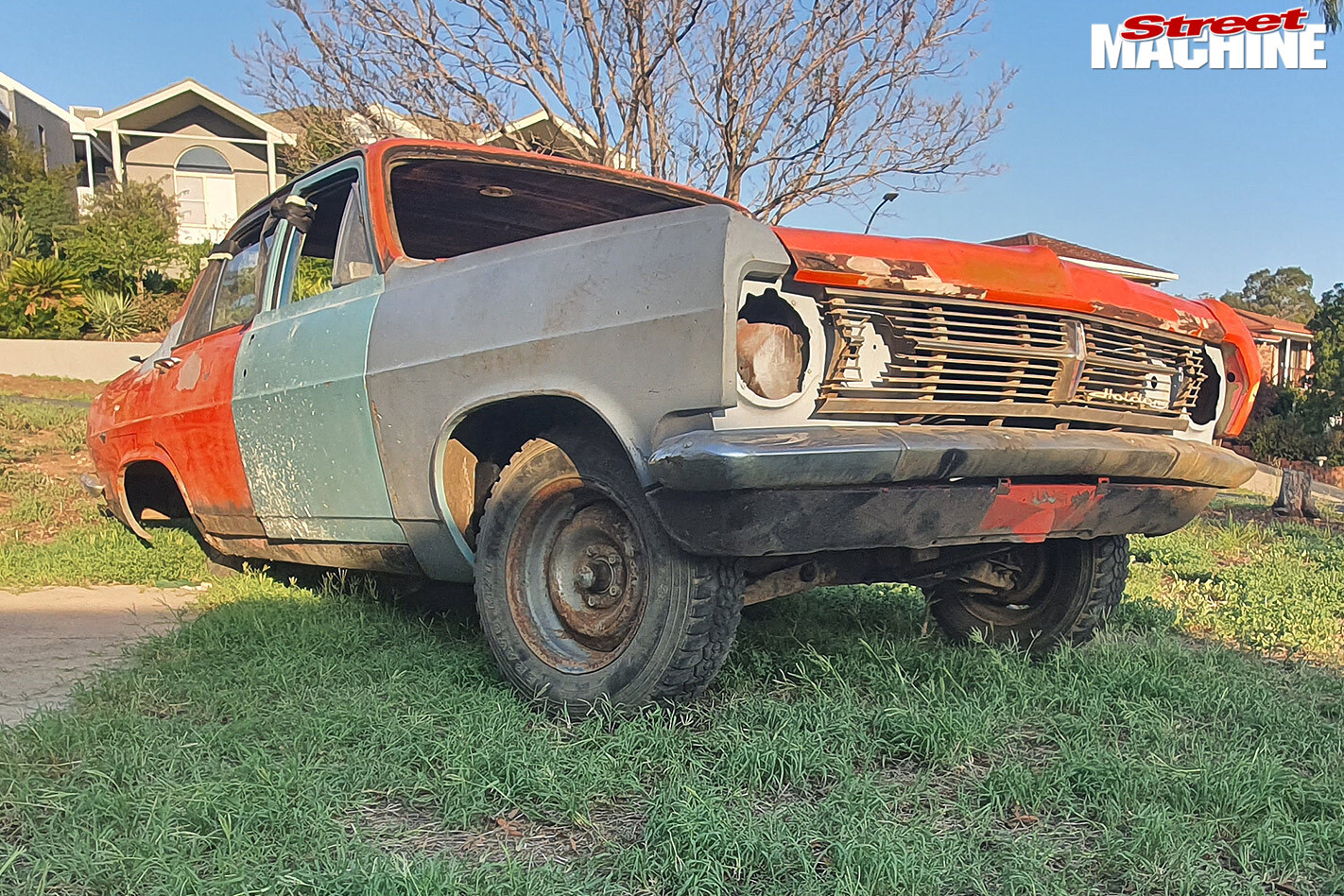 My other project is an old HR Holden, which I’m slowly turning into a skid rig.”