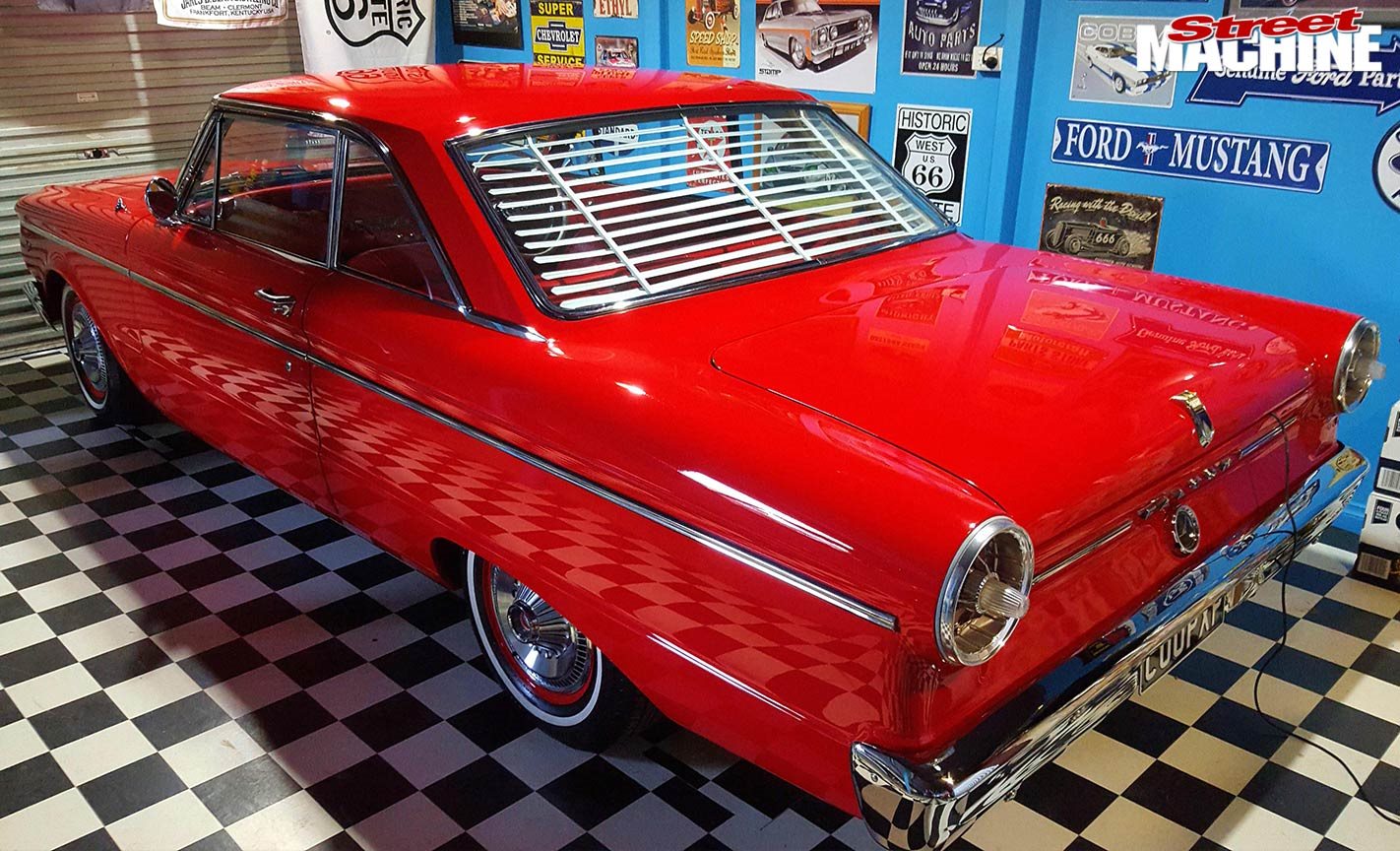 “WHEN I bought my XP Deluxe hardtop in 1995, it was in need of a full restoration. I had the body media-blasted, repaired and gapped, and it was then painted in PPG Lemans Red 2K inside and out. 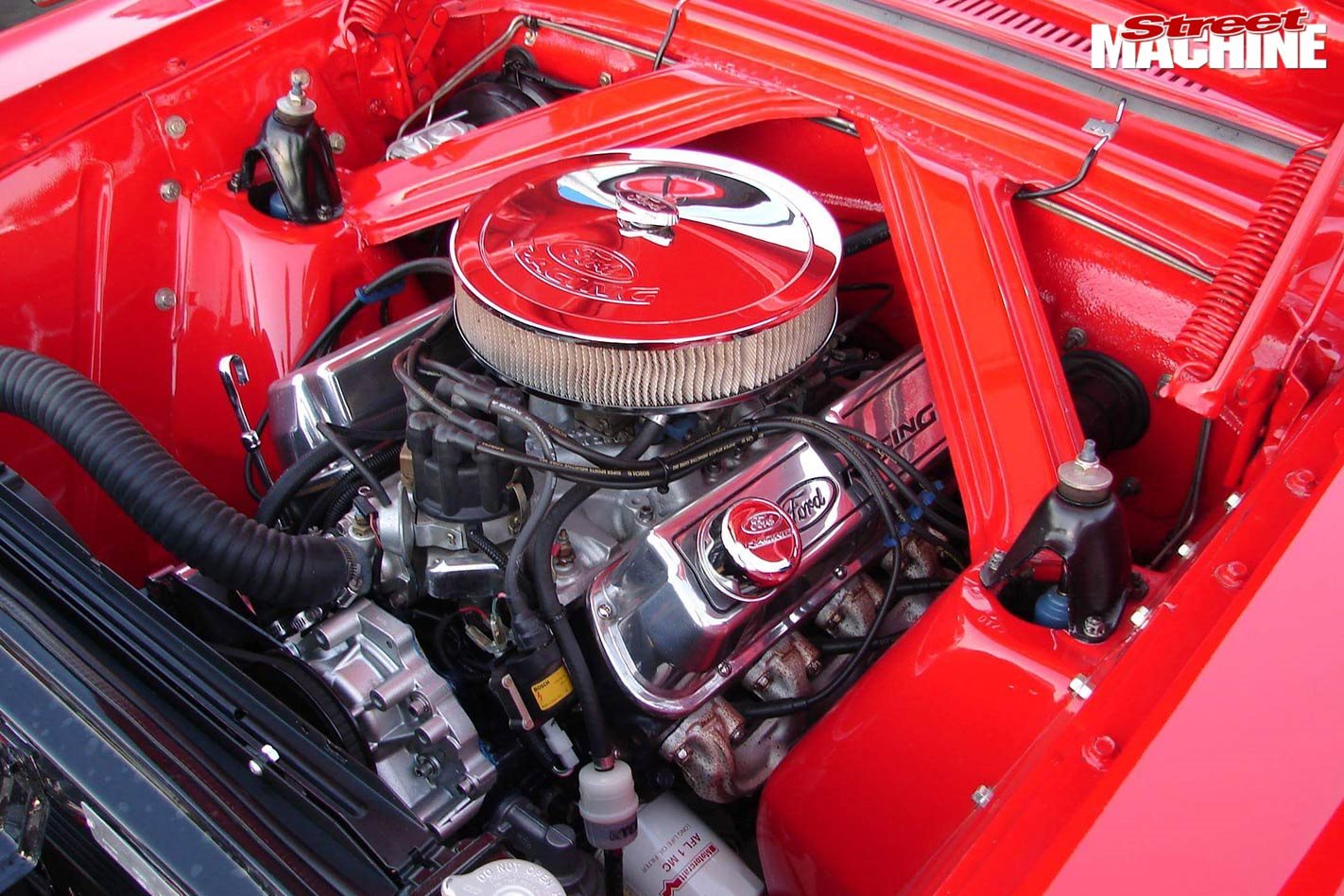 The engine is a mild 302 Windsor, 30thou over with 289 closed-chamber heads, oversized valves and minor porting. It also has a mild Crane Blue Racer camshaft, Edelbrock Performer manifold and a Holley 600 vac-secondary carb. Transmission is a C4 with a shift kit and stock converter, still running the factory column shift. It runs back to an eight-inch Ford Mustang diff. Front brakes are XF discs with HQ calipers, with XY drums on the rear. The front suspension is standard apart from Rod Shop two-inch drop stubs, King springs, gas shocks and a heavy-duty sway-bar, while the rear suspension has three-inch lowered leaf springs and gas shocks. 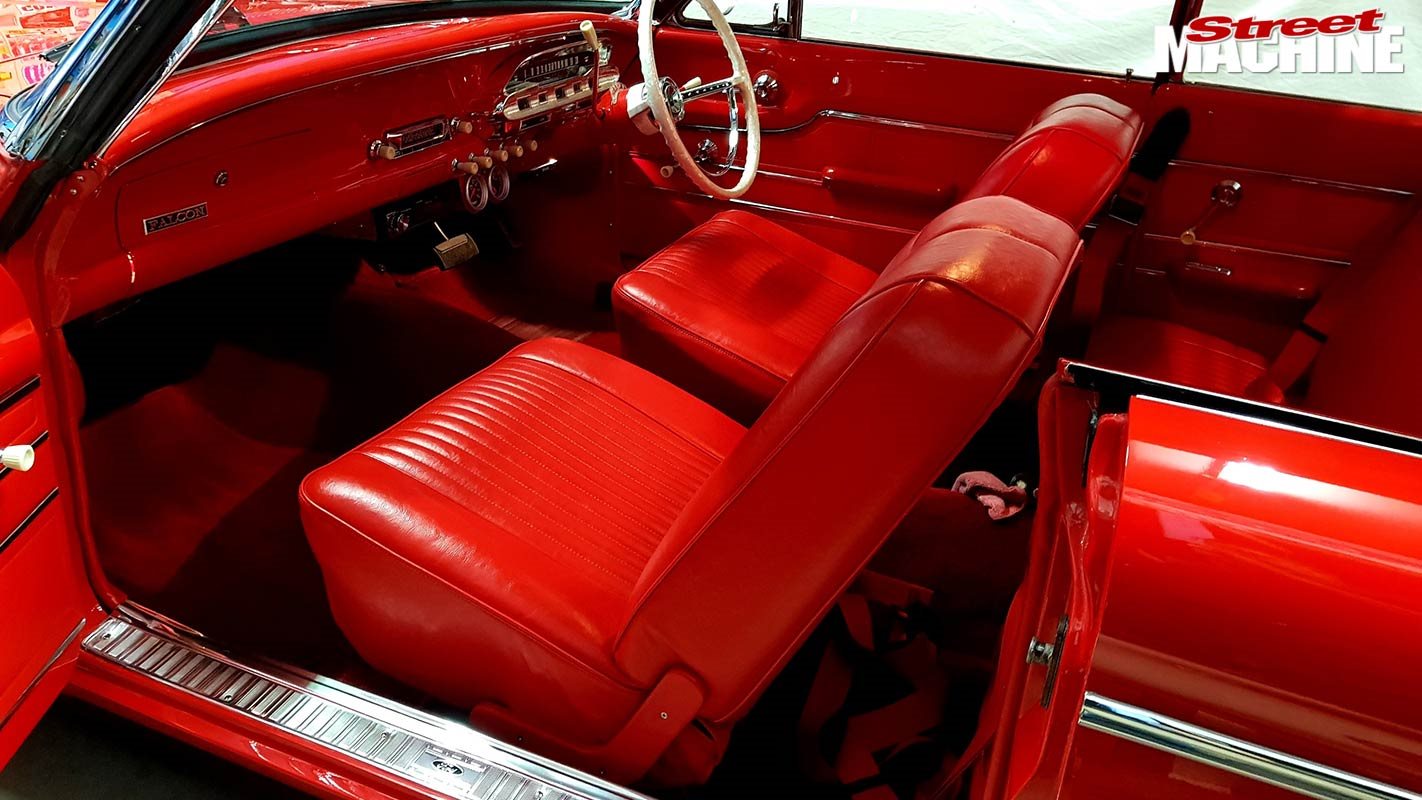 The interior has been retrimmed in Flame Red with Futura buckets and door trims. It rolls on 14x6 steelies with American ’65 Fairlane Sports Coupe hubcaps and Kelly 195 whitewalls. The car was completely rewired, and even though a working factory radio sits in the dash, the sound system has been upgraded with Pioneer gear: Bluetooth head unit, four-channel amp for the front and rear speakers, and a monoblock amp for the twin 12-inch subs behind the rear seat in a custom-made box. Build time was 12 years. 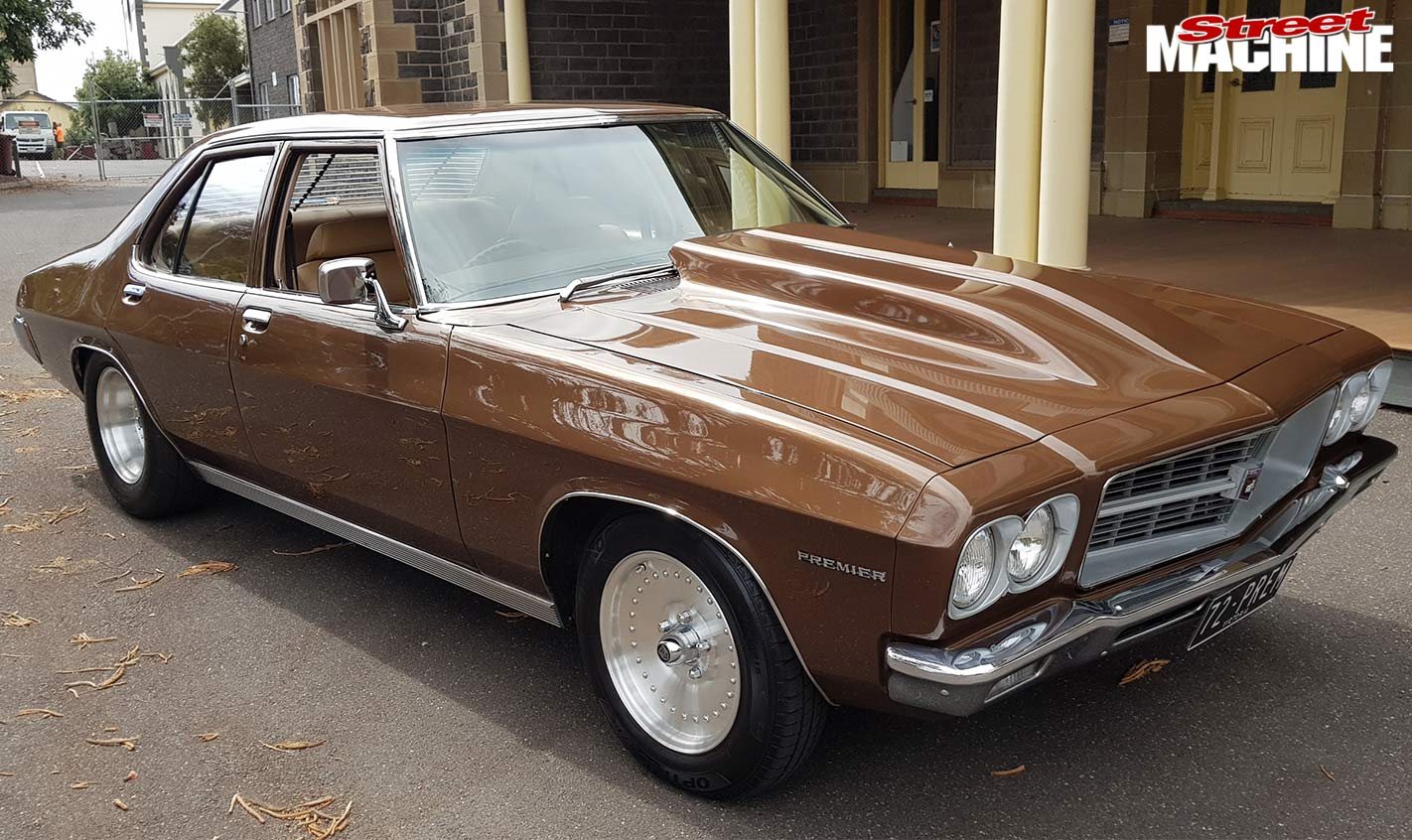 “MY HQ Prem runs a Dart SHP-block 406ci V8 with a Scat crank, Mahle forged pistons and rings and AFR alloy heads. The transmission is a TCI Super StreetFighter TH350 with a full-manual valvebody and a TCE eight-inch 5400rpm stall converter. 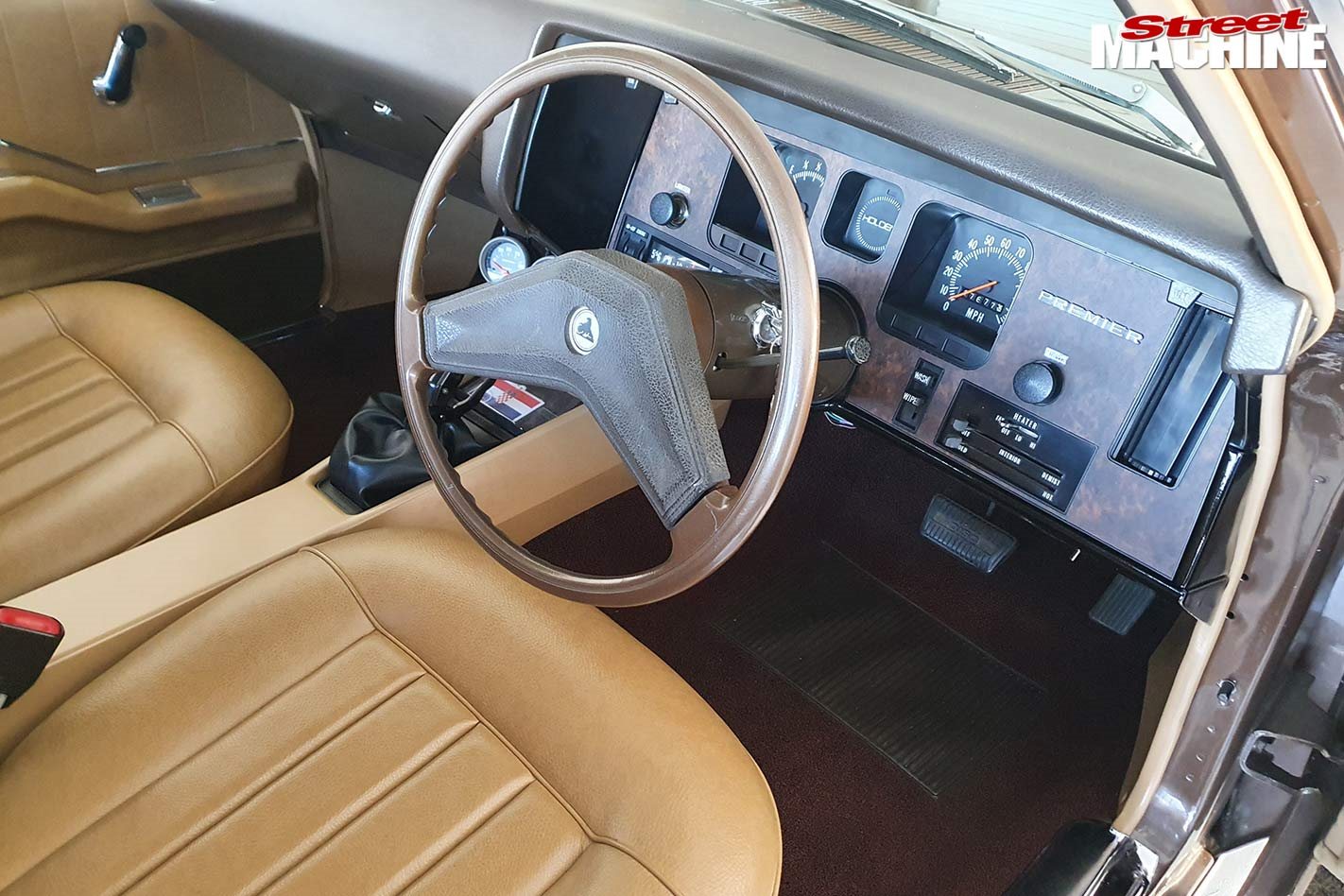 It runs through a custom chrome-moly tailshaft with 1350 billet yoke and unis to a Strange-case nine-inch diff with an Eaton Truetrac centre, 4.11:1 gears and Moser 31-spline billet axles. The exhaust consists of ceramic-coated headers and twin three-inch mandrel-bent pipes. The paint is Nutmeg Metallic, and the interior trim is Antique Saddle and Antique Brown.” 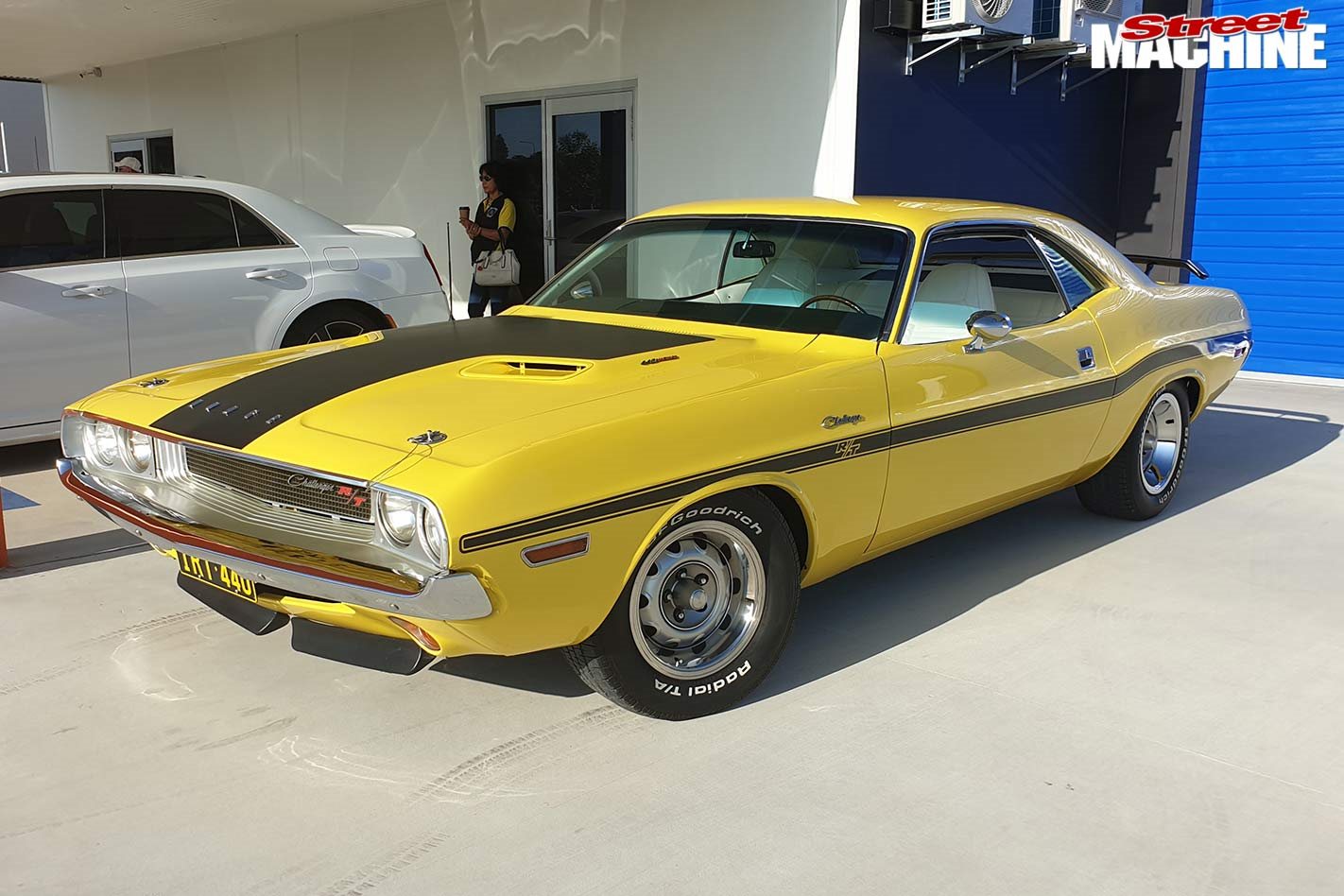 “THIS is my 1970 Challenger R/T, running a matching-numbers Magnum 440 with head work and a larger cam, topped by an Edelbrock manifold. Every nut bolt has been replaced, with all-factory interior. 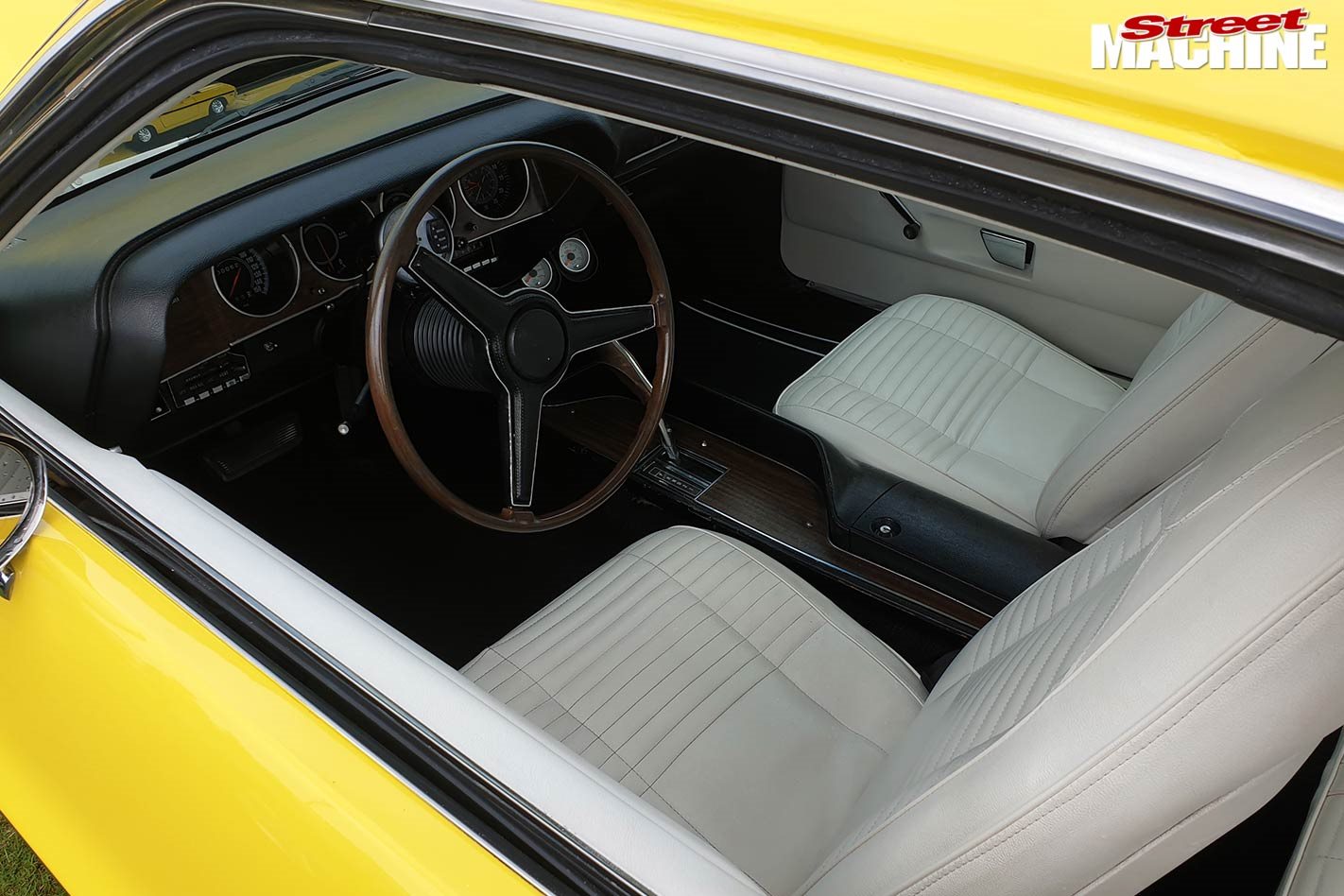 The transmission runs a 2500rpm stall converter, and the gears are changed with a very-hard-to-find Pistol Grip shifter.” 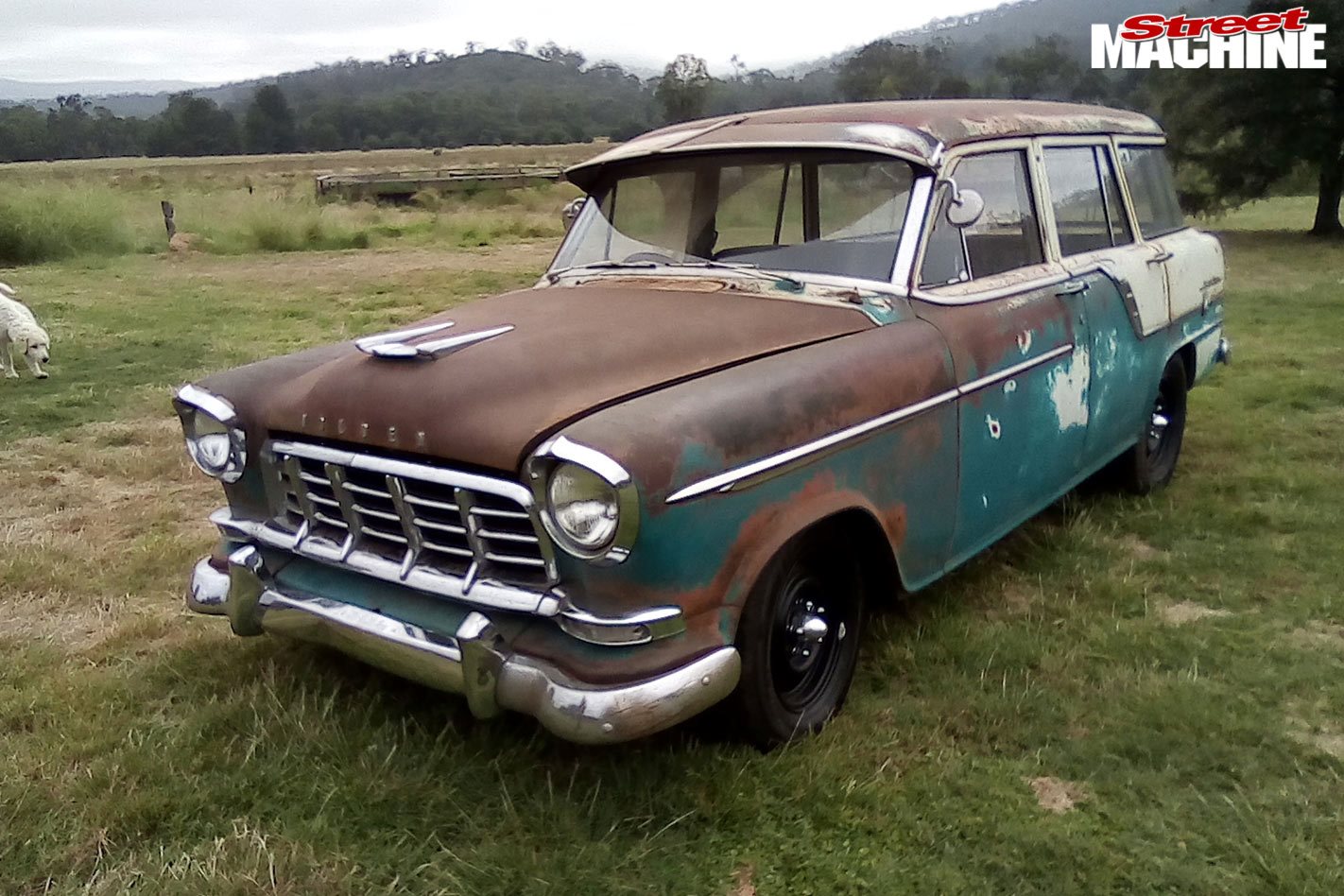 “I GOT my FC wagon three years ago as a complete original car, minus floors. I went about totally stripping the running gear out and replacing it with a cammed 307 small-block and TH350. The firewall and engine bay have been massaged in order to fit the small-block and run the exhausts between the rails for a neater factory look. 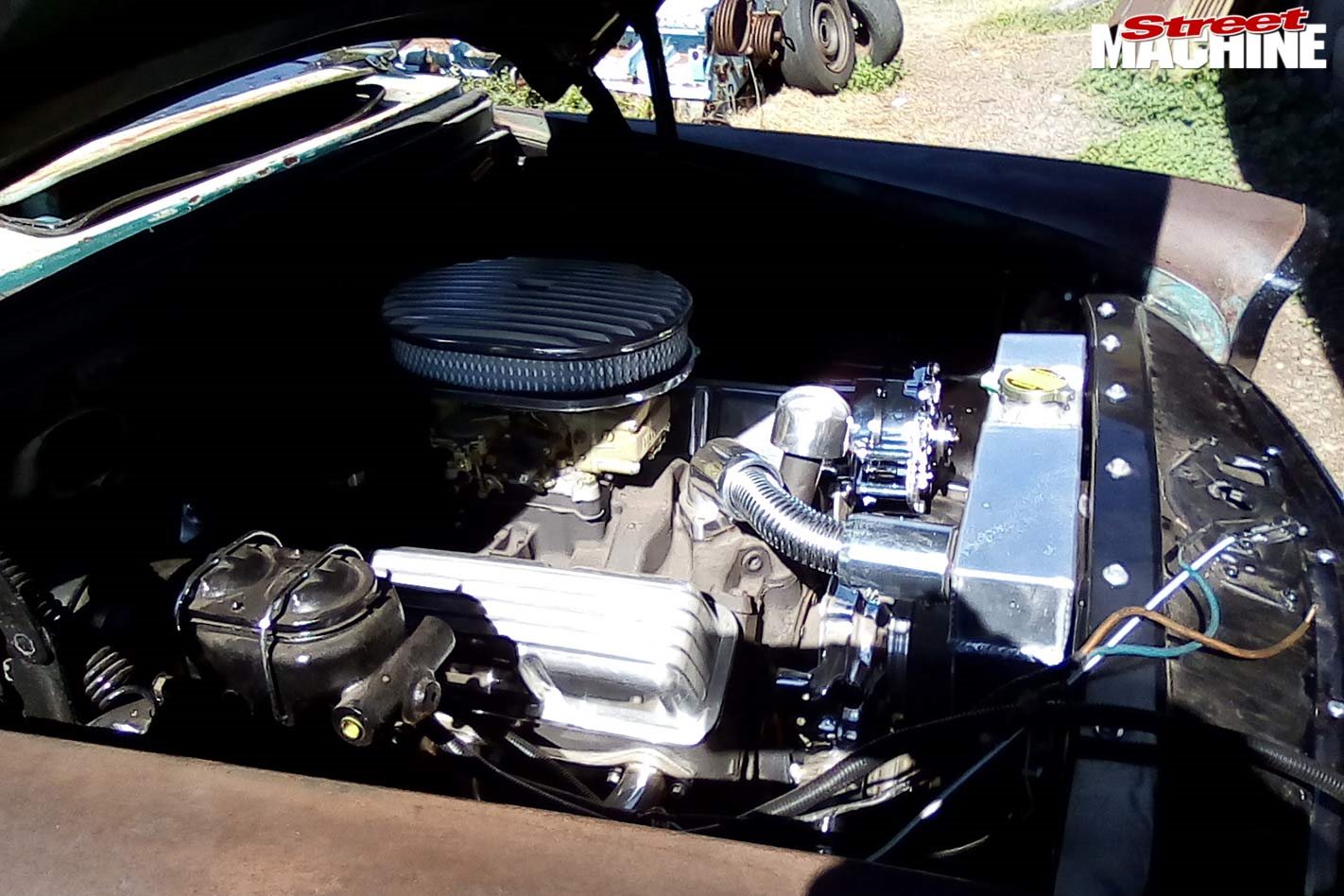 It has an HR front end with Rod Shop drop spindles and Commodore brakes, while the rear end is a shortened 10-bolt LSD from a VL Commodore. The interior has been re-upholstered in HZ black. The patina is 60 years in the making and will stay as-is. All the work has been done here in my shed. It’s now ready for engineering and rego.” 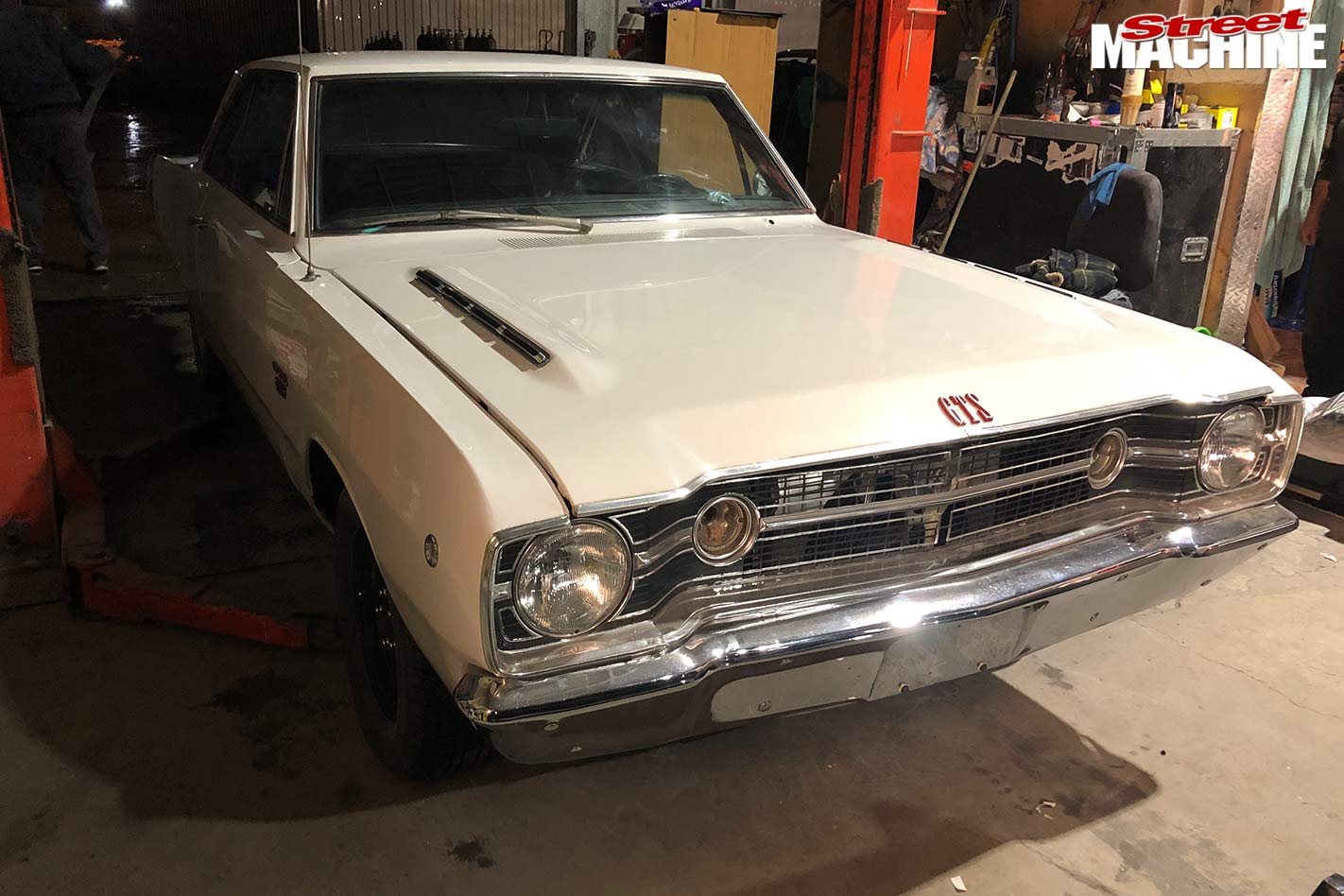 “MY CAR is a 1968 Dodge Dart GT, but it’s now a GTS clone. It originally ran a 273 small-block with a 904 auto, but I purchased it with a 440 big-block, A833 New Process gearbox and a standard-ratio 8¾-inch diff. Since buying the car, I stripped it underneath, and everything has been replaced with something new. 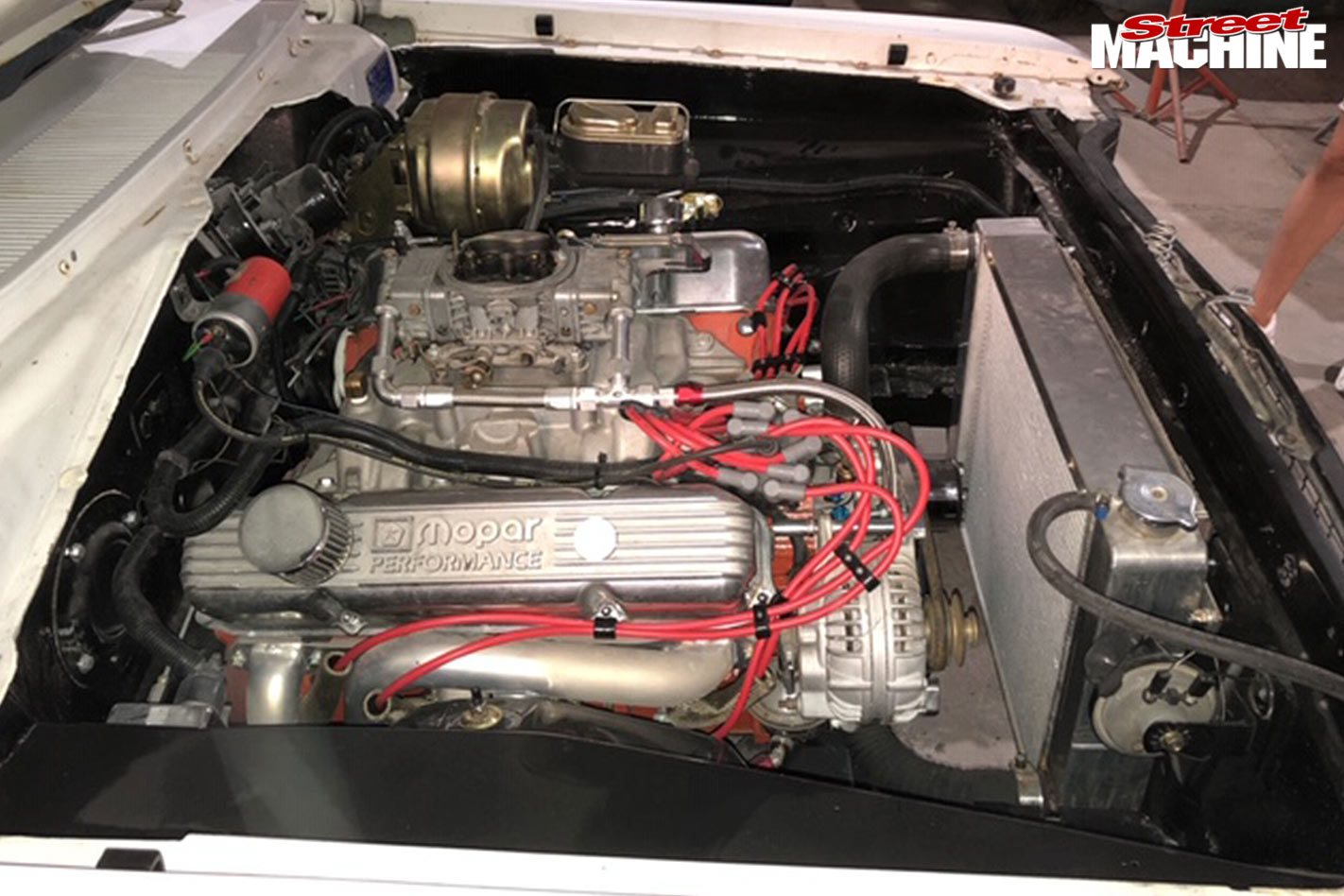 I swapped the four-wheel drum brakes to four-wheel discs with booster and master cylinder. The engine is a mildly worked 440 with TTI extractors, full stainless 2½-inch exhaust, Edelbrock manifold and a 750 Holley. The diff gears were changed to 3.9:1 and the LSD centre replaced, and 31-spline axles were added to suit the disc-brake conversion. 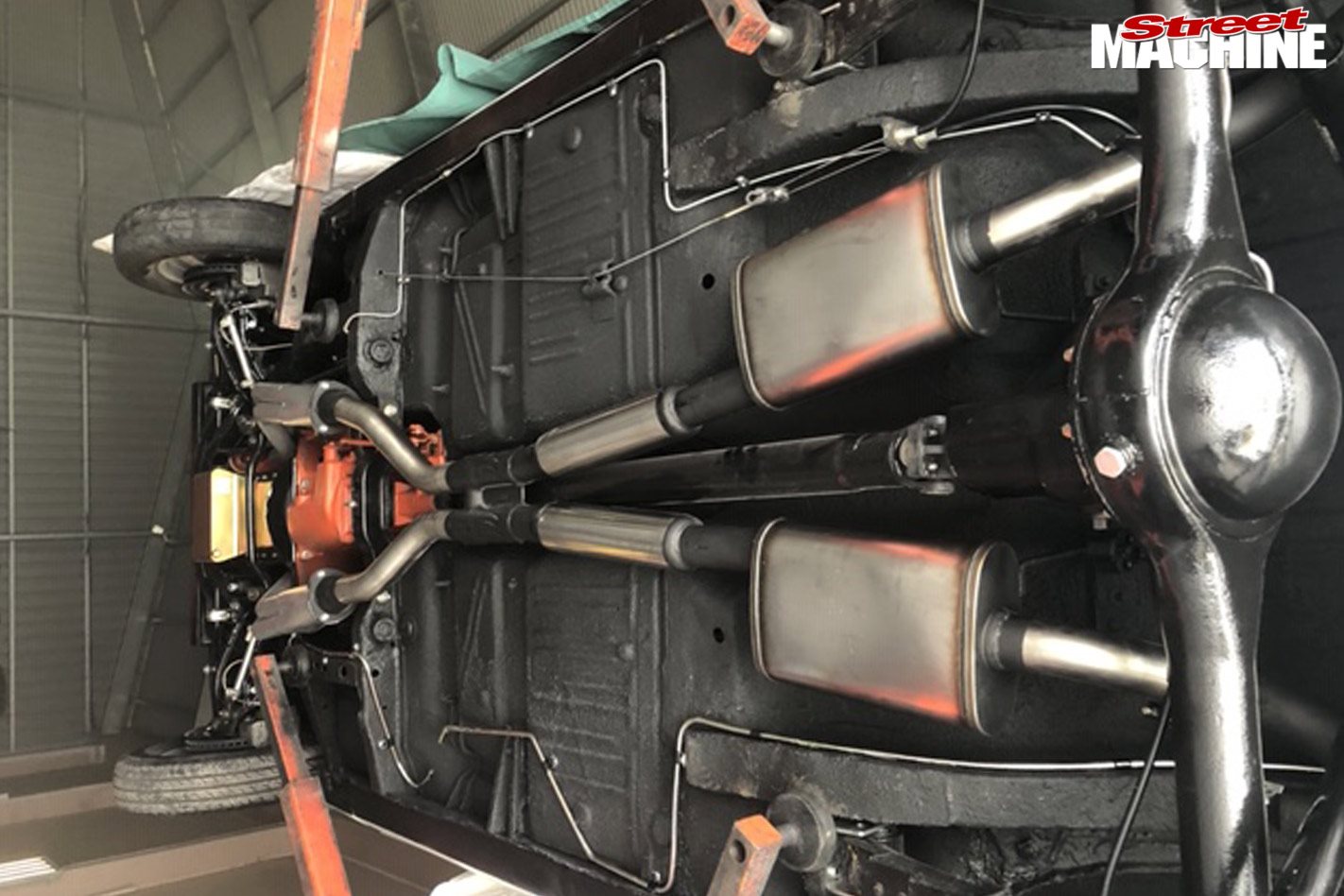 The gearbox has been fully rebuilt with upgraded internals. It has original GTS badges inside and out, as well as an original GTS boot garnish.” 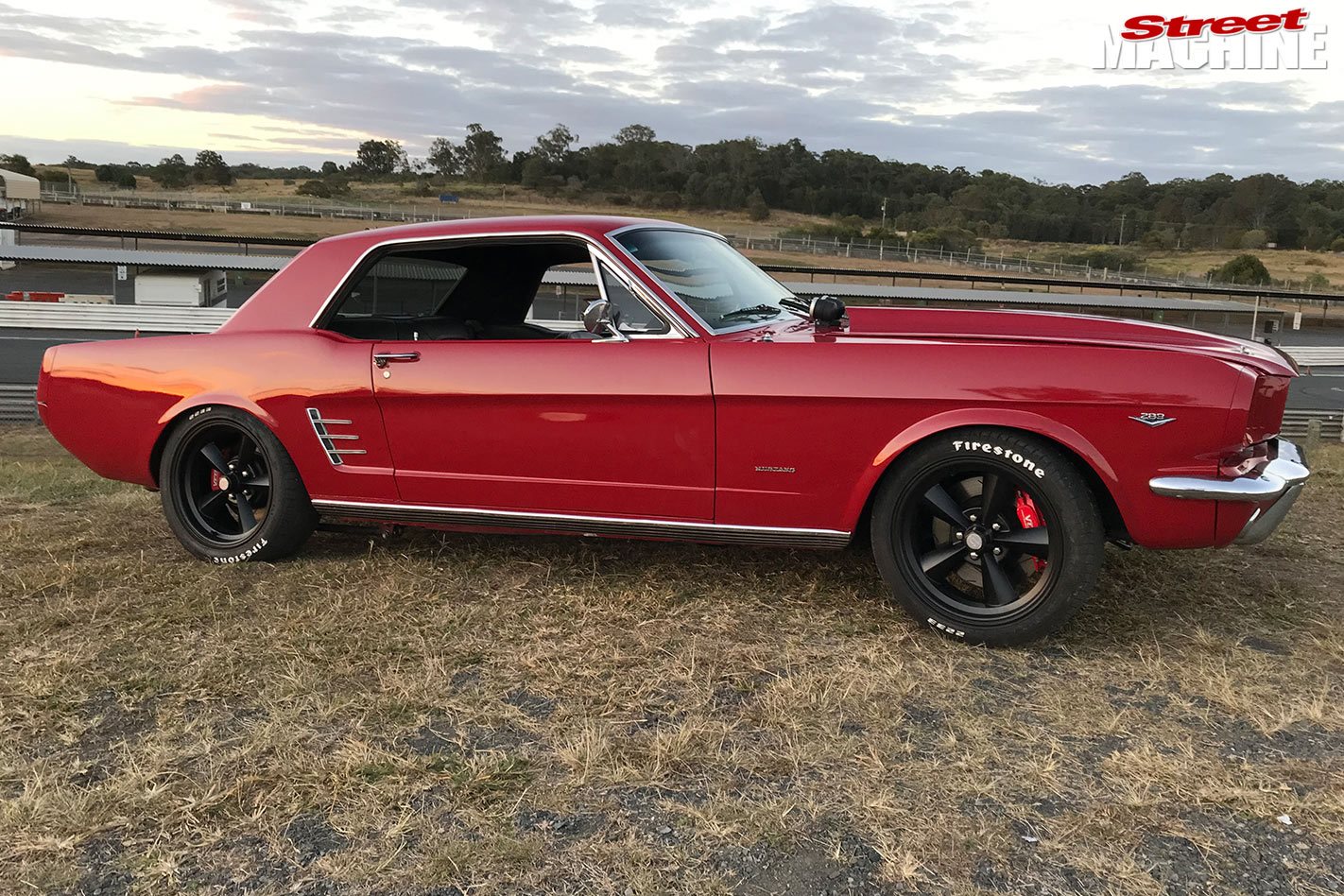 “THIS is my turbo Barra-powered Mustang coupe. The motor and gearbox is out of a 2010 FG G6 Turbo Falcon. The Barra has upgraded valve springs, ARP head studs and Atomic billet oil pump gears, but the rest of the internals are standard. The Garrett GT4088 turbo blows through a Plazmaman intercooler, and E85 is supplied by a Holley 12-1800 pump feeding the 1000cc injectors, regulated by a Turbosmart FPR2000. 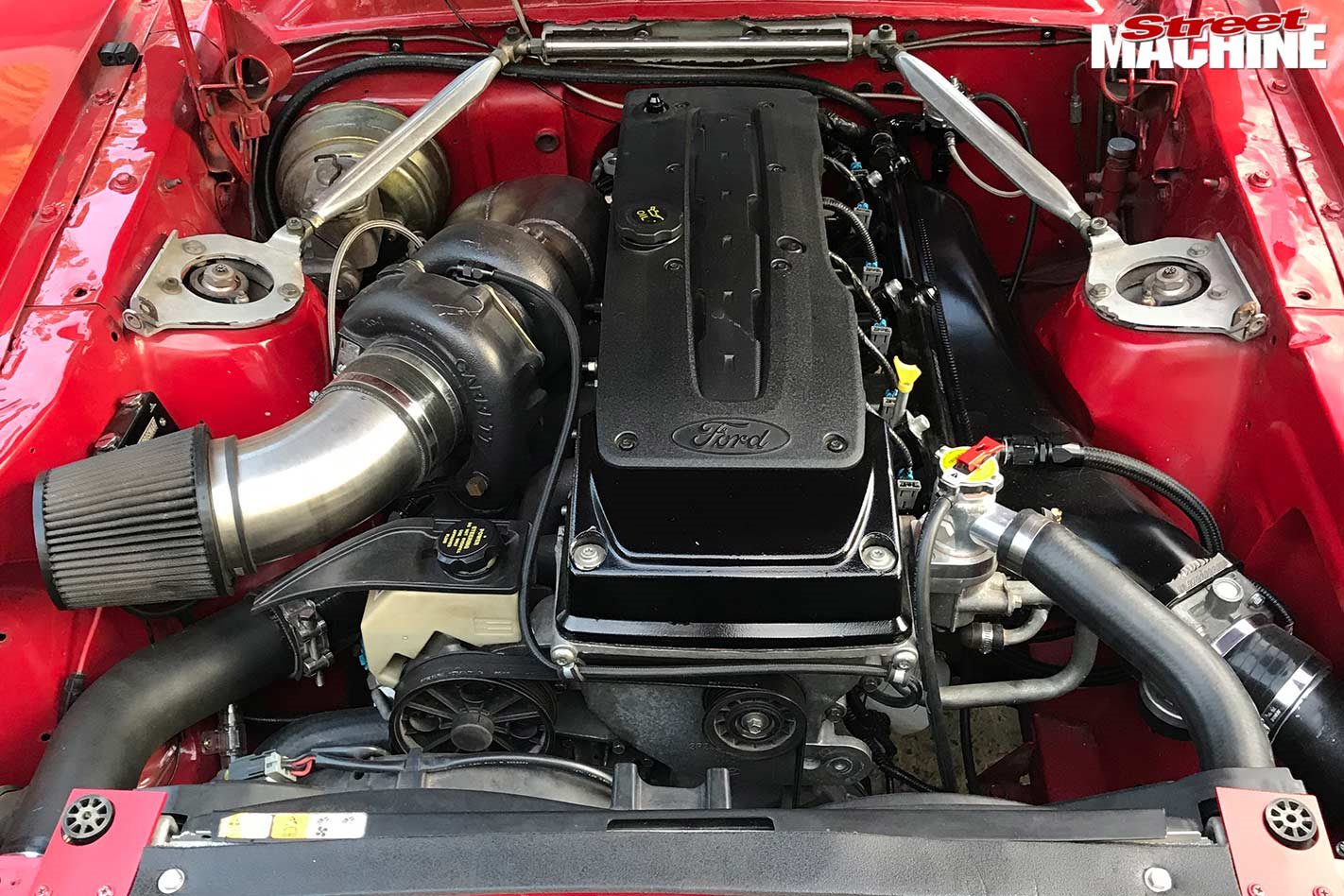 Exhaust-wise, the 50mm wastegate releases gas through a four-inch stainless pipe all the way through to a Flowmaster muffler. The ZF six-speed auto is accompanied by a 3200 stall converter, and down the back is a Strange nine-inch rear end with a Detroit Locker and CalTracs. The ’Stang is right-hand drive with an RRS rack-and-pinion, coil-over front suspension and big brakes, and the body has been stiffened up with subframe connectors. 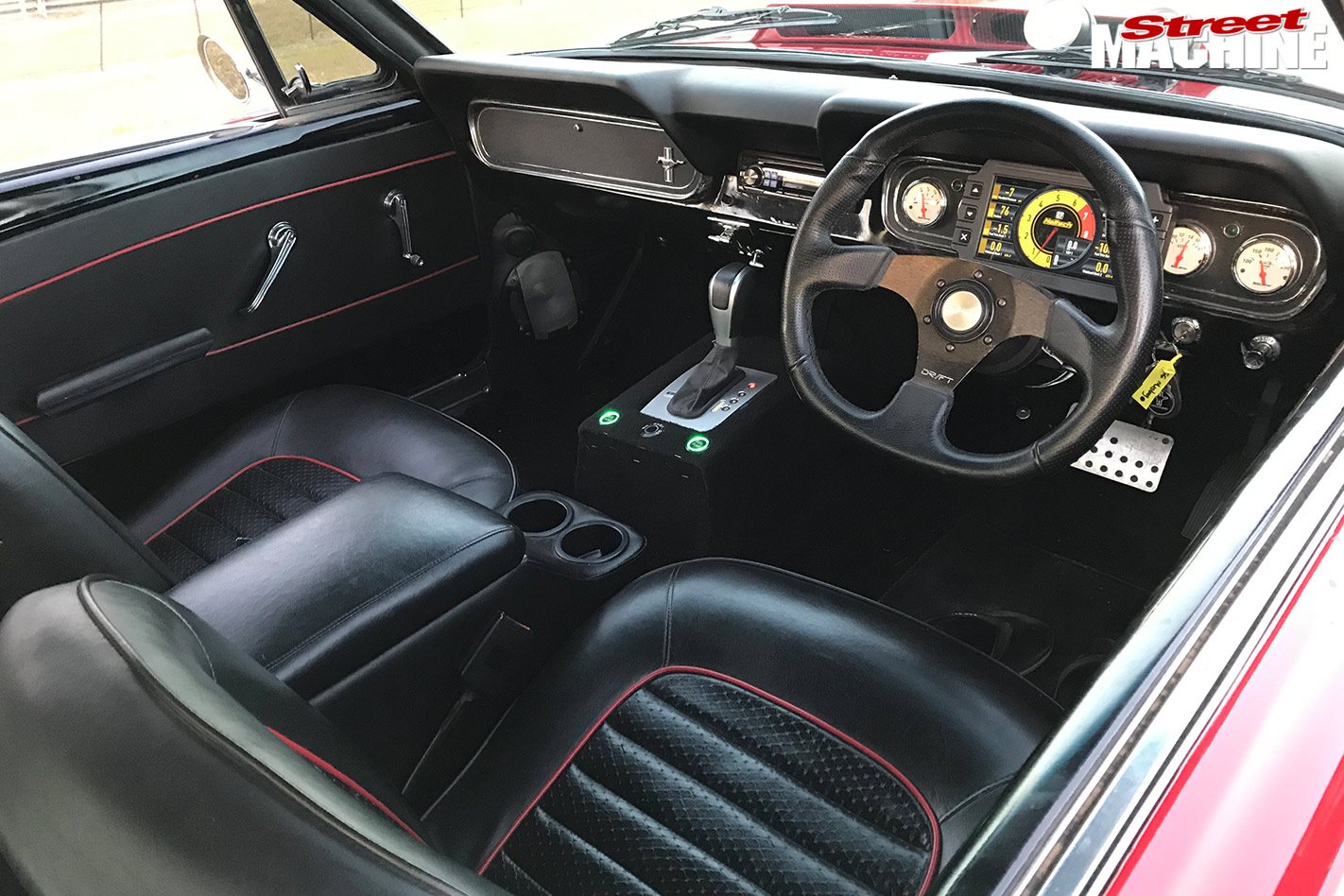 The Barra has made 640rwhp on 17psi and 700rwhp on 21psi. Previously the car was running a ProCharged 347 Windsor, which made less power and ran a 10.28. The new combo makes a few more ponies and is a few kilos lighter, so if traction permits, the car should run a nine-second quarter.” 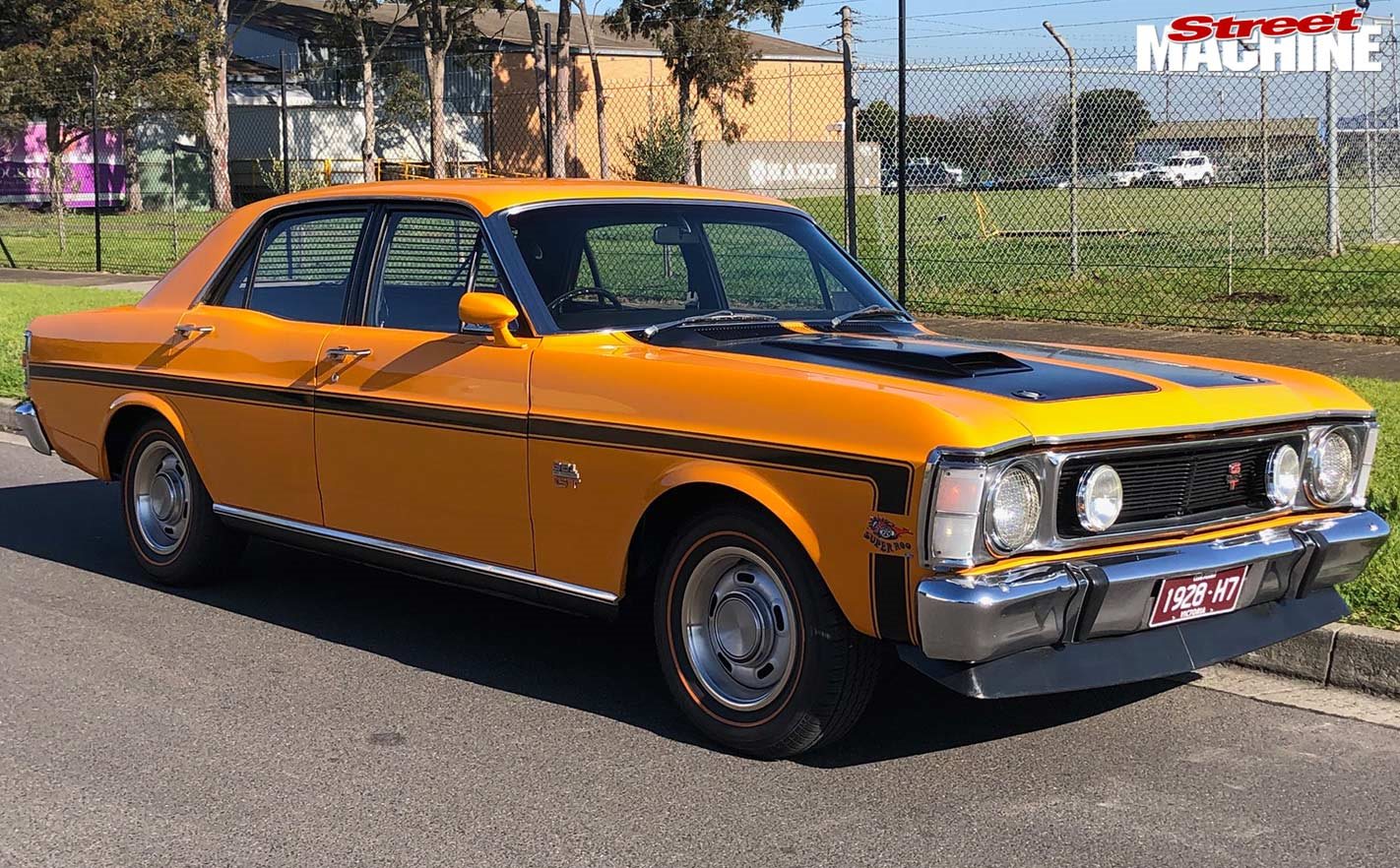 “THIS is my matching-numbers, one-of-one Surfer Orange XW Falcon GT. Ever since I was 18 years old, I promised myself I’d own and drive an original XW GT before I kicked the bucket, and in August last year I was able to make my dream come true, finding this car at a Sydney dealership. It needed some TLC, but according to the relevant Ford Australia and GT documentation, it is the only XW GT in this spec. After some improvements to the vehicle, it was ready for cruising in January this year, having sat idle in a Newcastle garage for five years. Now it’s time to start enjoying the classic car I dreamed about so many years ago.” 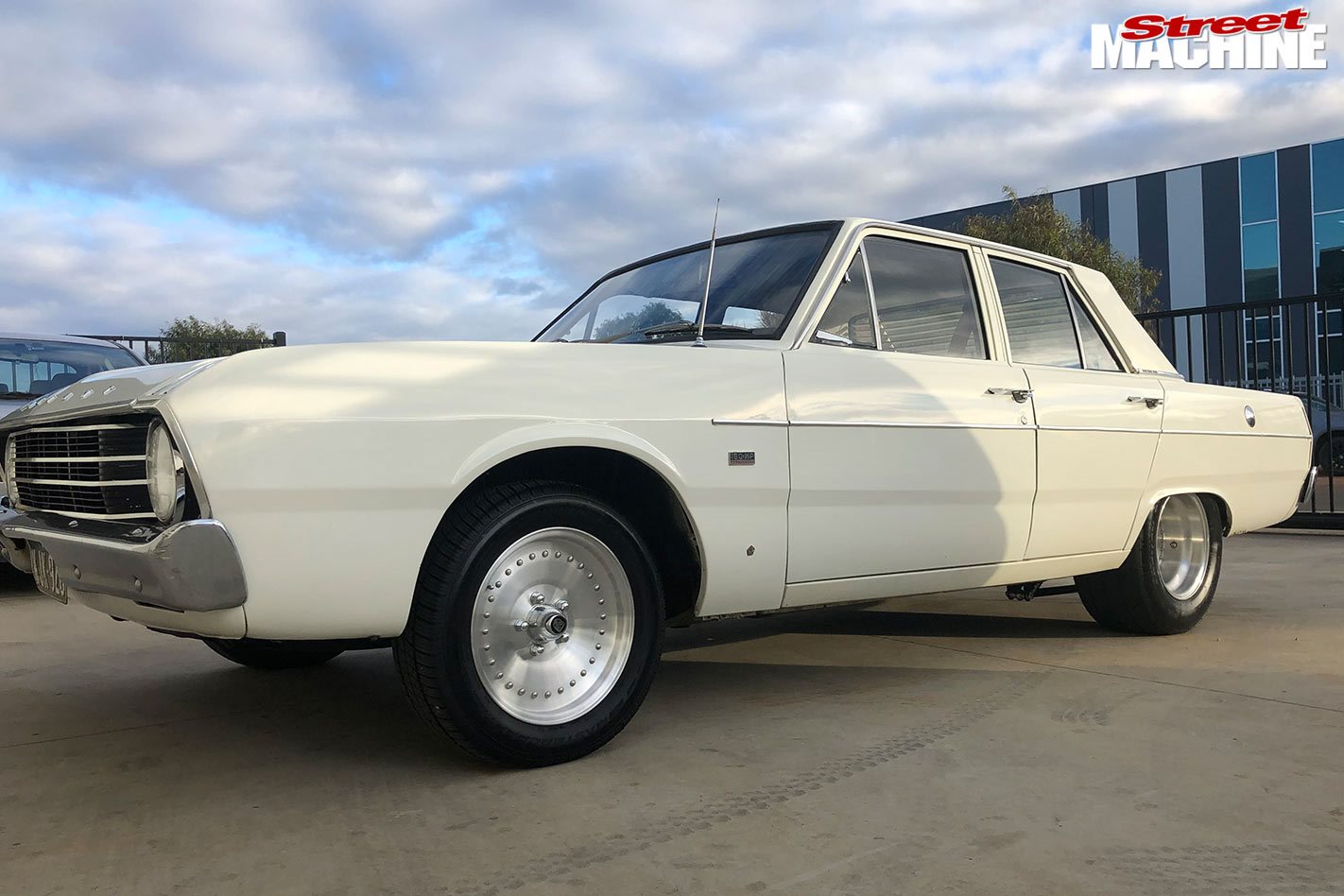 “THIS is my ’69 Valiant. I bought it when I was 17 from the original owners nearly 11 years ago. I drove it on my Ps for a while; it was an original bog-stocker with a slant-six and three-on-the-tree. Then the hunt for more power began. I decided to stick an injected 6.1L Hemi from a 300C in it, just to keep it all Chrysler. The motor has a cam and some more compression to give around 500hp. Trans is a three-speed 727 Torqueflite, and out the back we have a nine-inch diff with a Truetrac centre. I wanted big wheels on the back, so it has been tubbed to accommodate bigger tyres. The plan in the near future is to build a turbo combo on E85 – I want to go fast!”