Members of the Australian modified car and van scene were saddened by the loss of one of its pioneers, Pat Fay, on 1 September 2013 after succumbing to a long period of illness

PAT, 73, was a stalwart of the show scene, a drag racer and is best remembered for his custom FJ Holden hearse, Humpy Mekka, and his innovative Sydney-based parts business Pat Fay Spares. 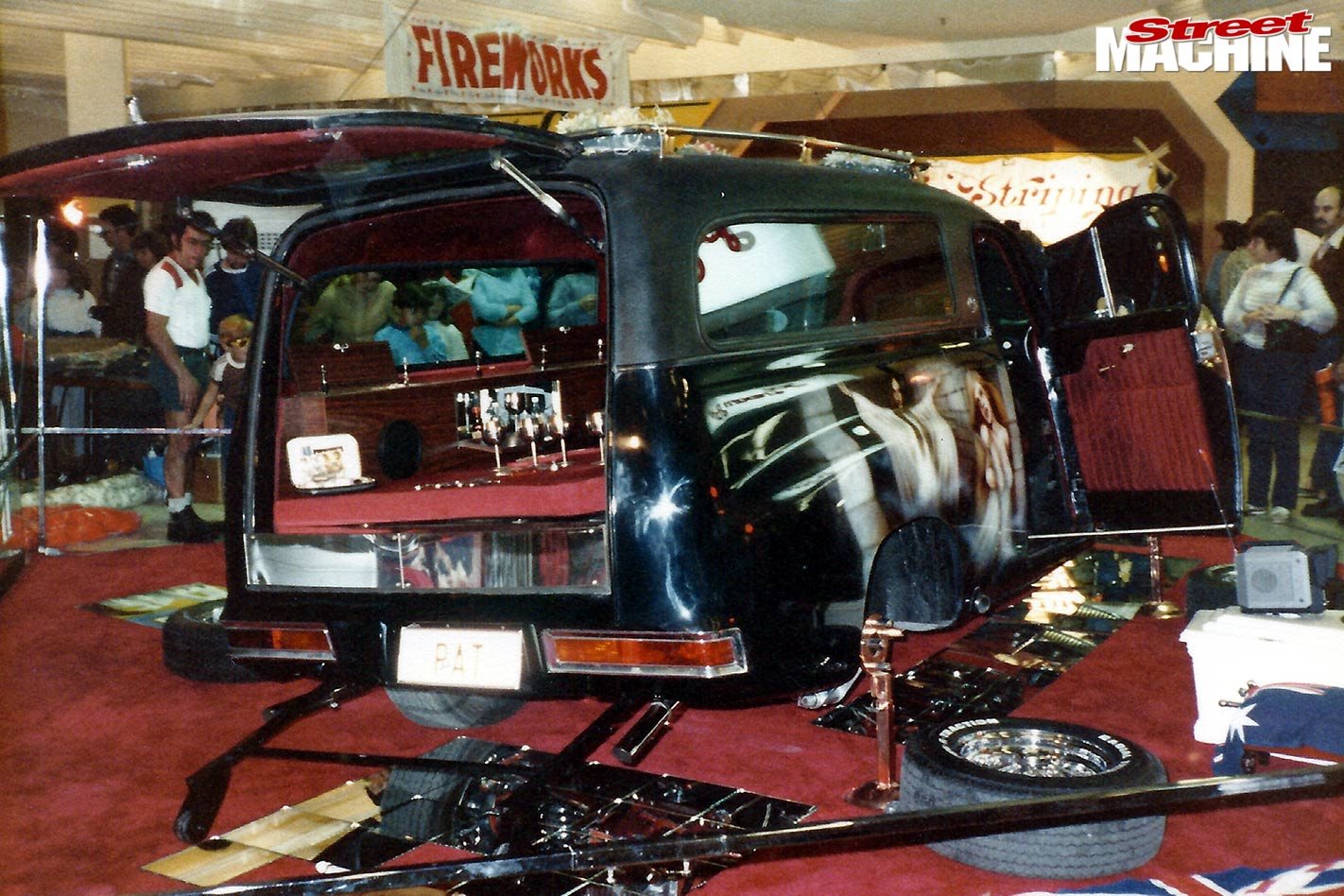 Humpy Mekka became one of Australia’s most successful and recognisable show cars. While the hearse has been in storage for years, Pat remained until very recently a fixture at the Street Machine Summernats, as Entrant Number One. 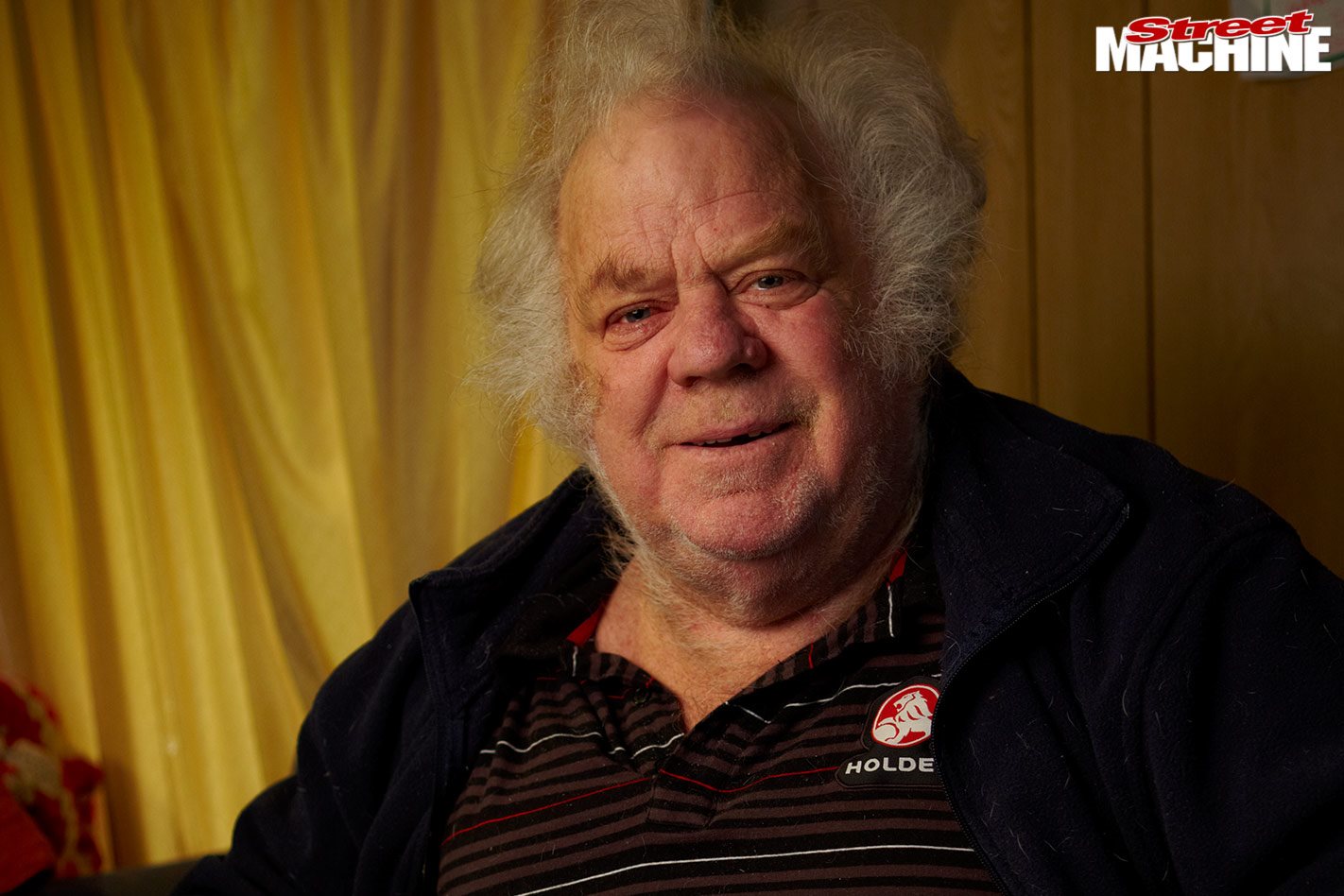 I COMPETED against Pat at more than 40 shows throughout the 70s and 80s and was proud to call him a mate. He was a stager and a stayer — loud as hell, of the older generation who were true larrikins. I met Pat in 1977 at one of the first van shows, where I entered Alley Cat. I actually got electrocuted by the bodgy display fencing he had around Humpy Mekka but we moved past that pretty quickly and formed a strong friendship as the van scene continued to boom.

His parts shop in Blackett was jammed full of bits and pieces, but early Holden stuff was his specialty. He truly knew the product and was like a walking encyclopaedia when it came to doing business.

Pat was an innovator in the early Holden and panel van scenes and Humpy Mekka was up there with the best. You could guarantee that in the early years it would change for nearly every show, continually being upgraded and refined as trends changed.

He hoarded ideas and suggestions that he saw or received and was never one to sit still in making it competitive; that hearse is an icon, no question.

In the early years it caused Pat some grief with its artwork — blood, tits and graves weren’t exactly the best subject matter when it came to the local children’s hospital events — but it was rare not to see him in attendance. He’s a record-holder for most Australian individual trophy wins with that FJ — I reckon around the 1500 mark! To even attend enough shows to achieve numbers like that demonstrates his support, passion and love for our hobby 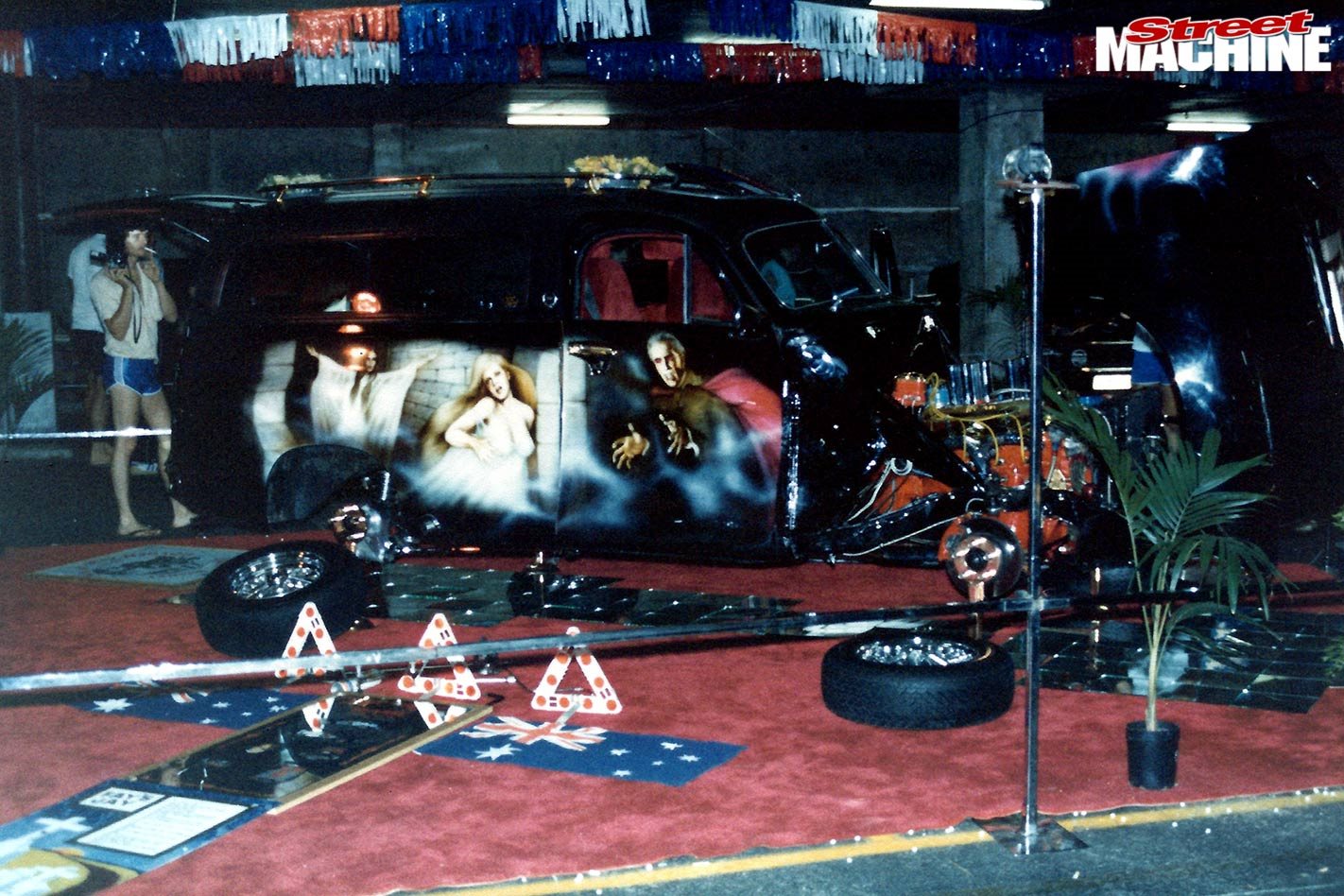 I WAS a member of the Central Coast Van & Ute Club and became friends with Pat around 1980 when he brought the hearse to our Gosford Show. He was a real gentleman who loved a chat.

One of my fondest memories of Pat was the year he was driving the FJ into the pavilion to set up and he blew the gearbox halfway up the ramp. Most people would probably have cracked it and taken their bat and ball and gone home, but Pat rallied some troops and pushed it into position. He’d committed to support our show and that wasn’t going to change as far as he was concerned. He won a trophy anyway and the small drip of oil left underneath was no big deal back in those days.

Through the following years I would religiously drop in and see Pat when I visited Sydney. Although Holdens were his thing, he was also a true vanner and helped with parts for my XY van, Mystic Illusions. Ironically, our vans ended up being stored together many years later. I know he would have loved to see the FJ doing the show scene again — it would make him extremely proud. 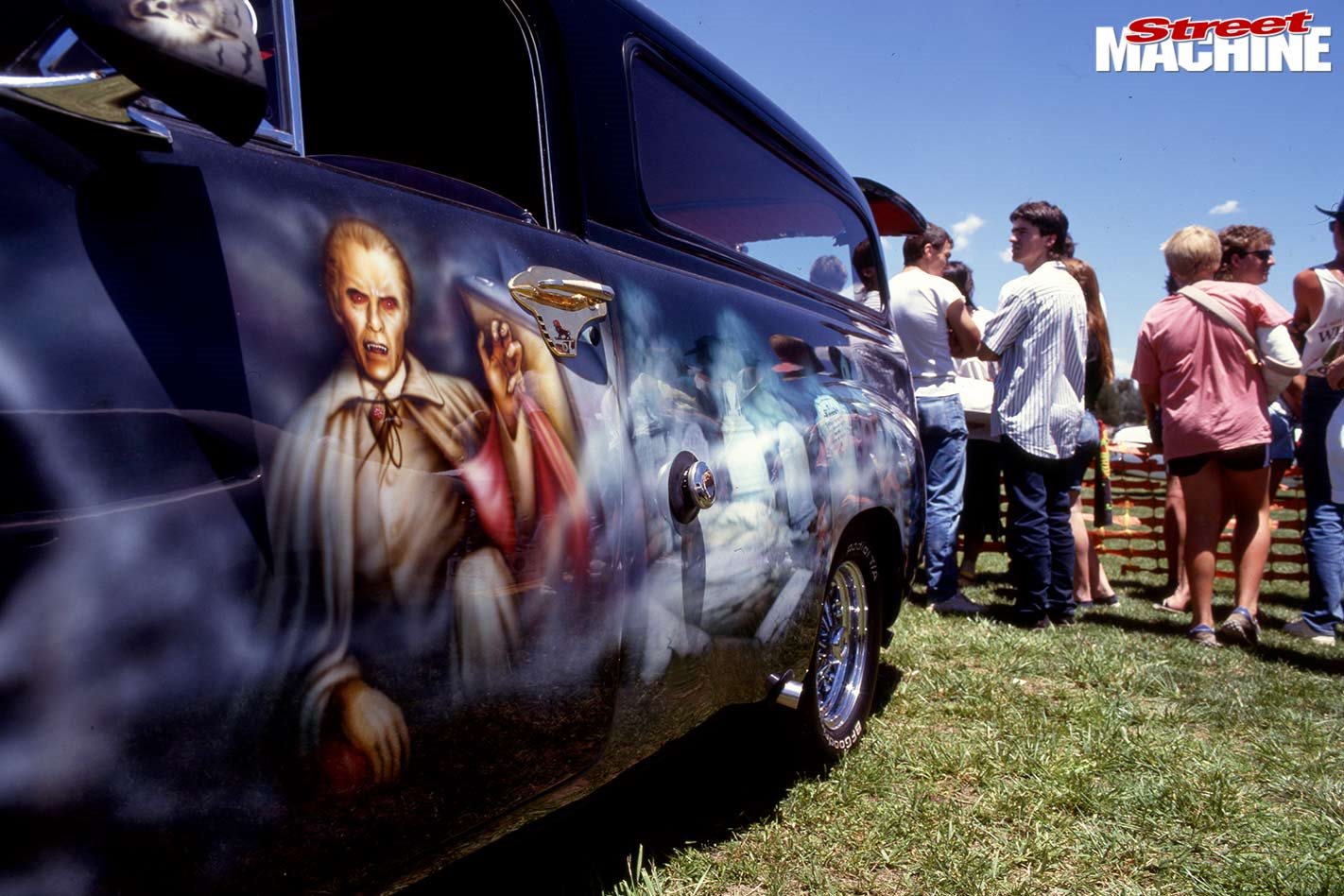 PAT Fay was a big guy with wild and woolly hair and a voice like a foghorn — it was like he’d swallowed an amplifier. I met Pat in the late 70s around the show traps. Street machines were in their infancy, and Pat and the FJ hearse were successfully bridging the gap between the early Holden and street machine movements. He’d rumble in with his old truck and caravan in tow — the truck to haul Humpy Mekka and the caravan to sell his merchandise — right on schedule, in yet another display of his thorough and unwavering passion for the modified car scene and its people.

Pat loved being part of the movement; the culture, lifestyle and even the politics.

He led almost a gypsy life, trundling up and down the east coast in his truck known as Luna Park of the Highway — it had that many bloody lights on it that the nickname stuck.

In later years, as Summernats evolved, Pat would take his place around the cruise route and the sight of him leaning out of his caravan window chatting to people year after year is ingrained in my memory. In the off-months he’d drop by the Summernats office with a cake, to chat with me and the staff; for him it was like visiting family. 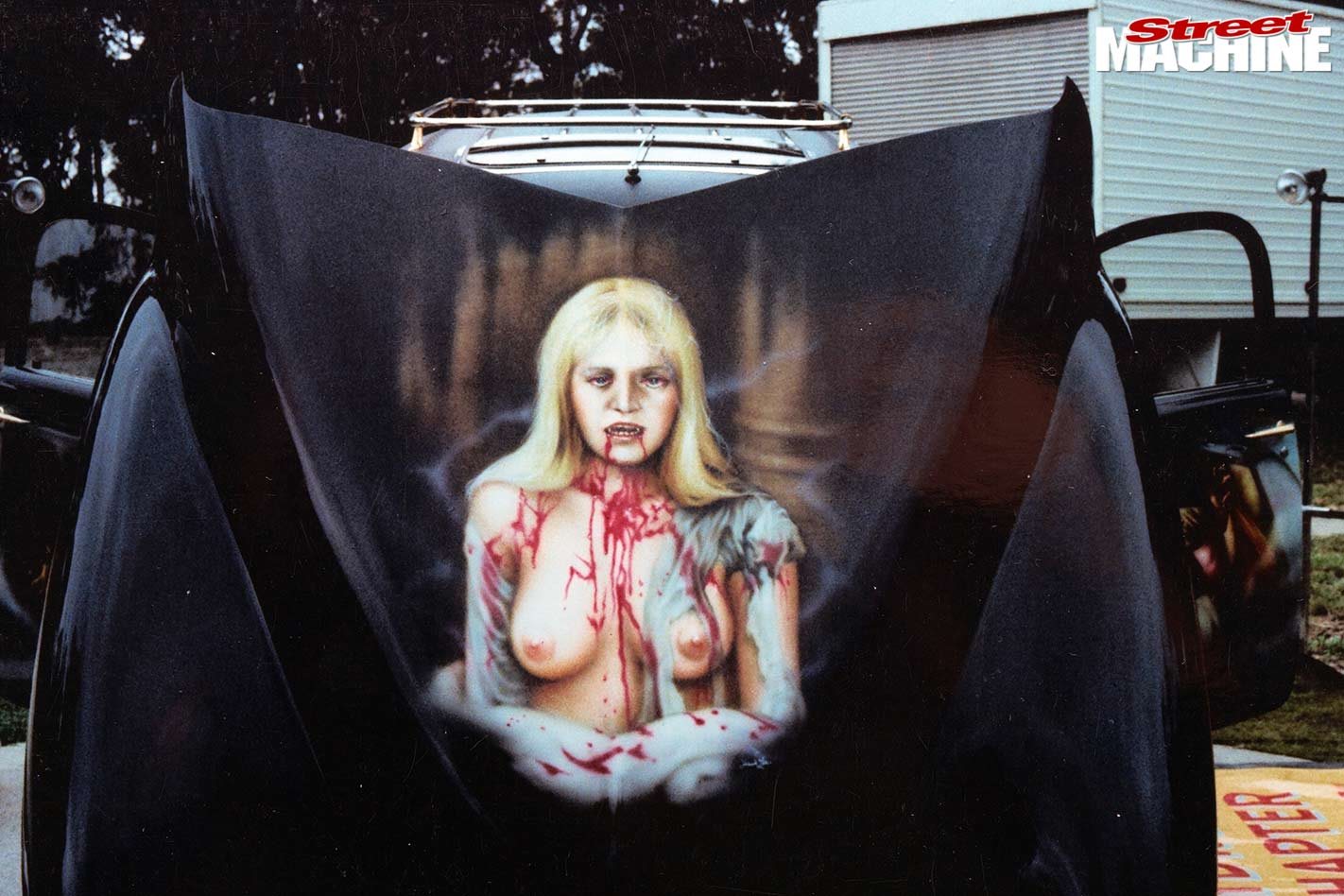 He’d chase me around the office giving me an earful about something, then be on his way to again spread the gospel with Summernats livery emblazoned down the sides of his truck.

Pat’s unwavering love for the modified vehicle scene has done more than most people realise. His relentless attendance at show after show helped nurture the growth and raise the profile of companies like Rare Spares, especially in the years before the internet. He was a mobile shopfront, if you will; taking products out to the consumers so they could get on the road and share in the lifestyle and car scene that he so adored.

I had the honour of being best man at his wedding to Carol in 2012 and to speak at his funeral, at the Summernats Burnout Track on 13 September. He was a unique and passionate individual who made a huge contribution to the Australian modified car scene and he did it his own way. 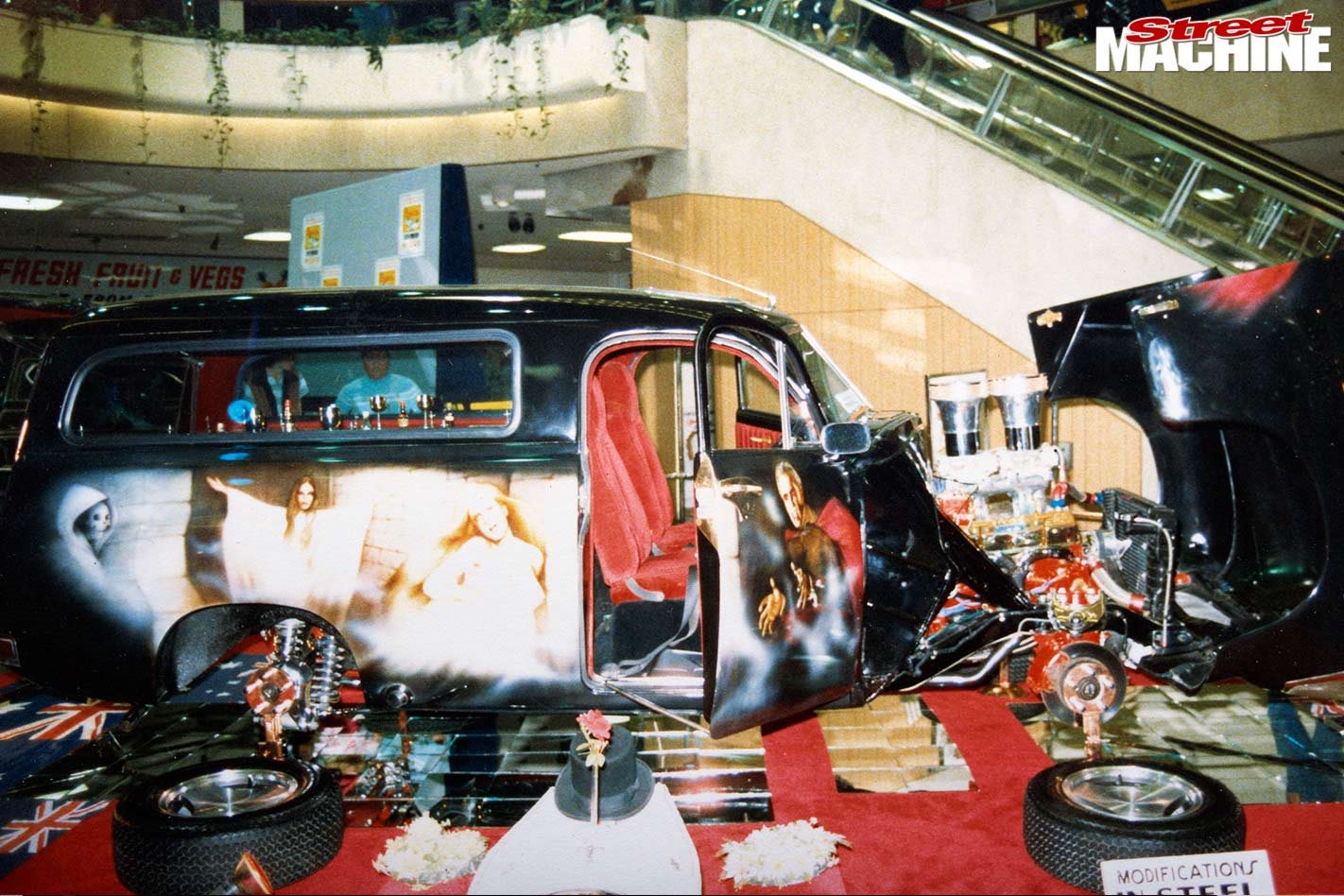 ON 1 SEPTEMBER I woke to hear that Pat Fay had passed away. That was truly a sad day, not just for the vanning community but for all modified car enthusiasts; the loss of one of our sport’s true legends. I loved Pat. He was such an awesome, larger than life, genuinely funny and great man, and I feel so lucky to have many wonderful memories of him.

I met him in 1989 at a Liverpool car show when my husband, Neil, introduced me to vanning. Pat loved his FJ, which he was quick to point out was a hearse not a van, and proceeded to tell me all about it. It was like nothing I’d ever seen before with the full-on murals and a coffin in the back.

After that first meeting, anytime I was at a show and in earshot of his caravan, I’d hear him yelling: “Hey Blondie! Aren’t you going to come and say hello?” He was one of the first people I looked for at shows because we would have such a great laugh; he always made me feel welcome.

Thanks for the wonderful memories, Pat, and the great laughs. You will never be forgotten, only remembered always for the legend you were. 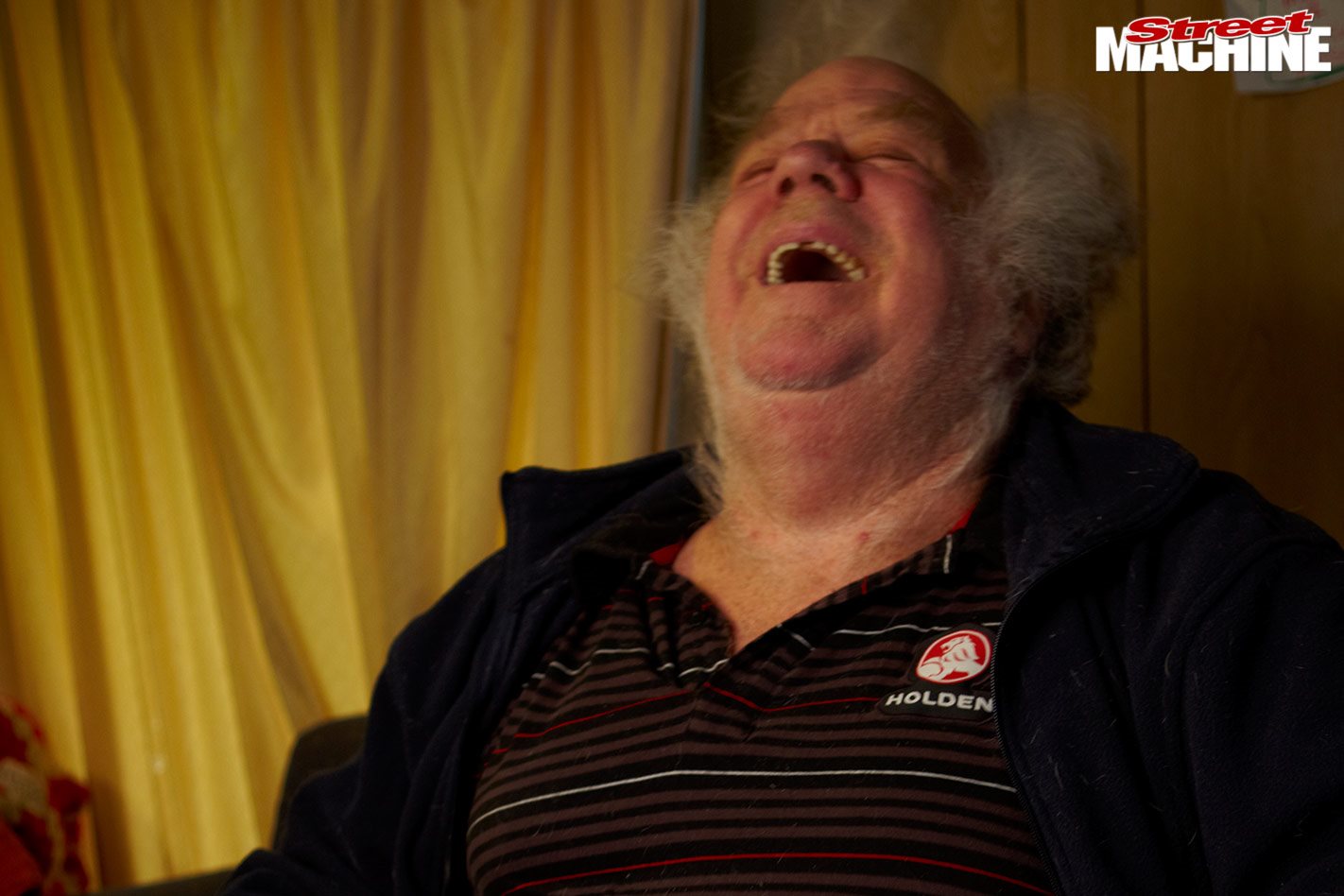 On behalf of Kim, Susan and David

THERE were so many people who knew Dad. He was larger than life, full-on, loud, a crazy guy who was always busy. He had friends all over Australia but not just in the car scene. He drove trucks for many years and was a true character in the heavy vehicle industry, behind the wheel of Luna Park of the Highway or attending the Convoy For Kids charity drives.

His passion was for FX and FJ Holdens and he was a founding member of the FX-FJ Club with the likes of the Brown family and Stan Bennett. He owned an immaculate black FX sedan that unfortunately got written off by a bus but that paved the way for what was to become his signature car — the FJ hearse. 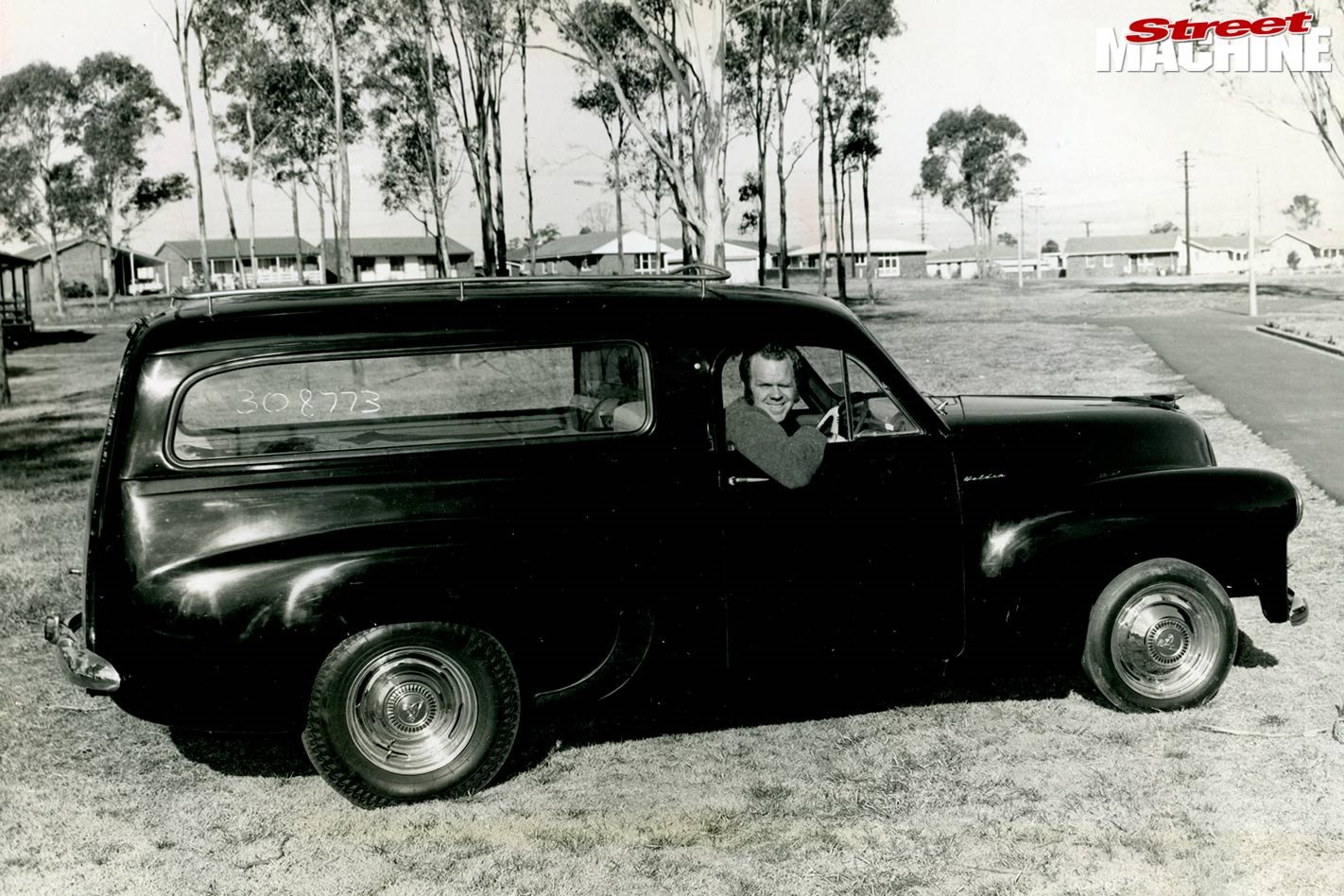 He won literally hundreds of trophies and prizes with Humpy Mekka; our lounge room was packed full of what Mum cursed as dust collectors, and many of them were huge. Then there were the cutlery sets, silverware, crystal decanters he also won — it was ridiculous!

As kids in the 70s we attended show after show with Dad and the FJ and got to spend our school holidays on the road with him as he pounded the miles in his truck.

He also drag-raced for a short time in the early years, firstly with a flip-bodied VW called Rapid Transit and later with an orange Chev-powered T-bucket.

When he quit truck driving full-time, he set up Pat Fay Spares out of our garage in Blackett. It was literally filled to the brim with car parts and was like a jungle but he knew where everything was and would crawl over piles of bits and pieces to find the exact thing a customer was chasing. 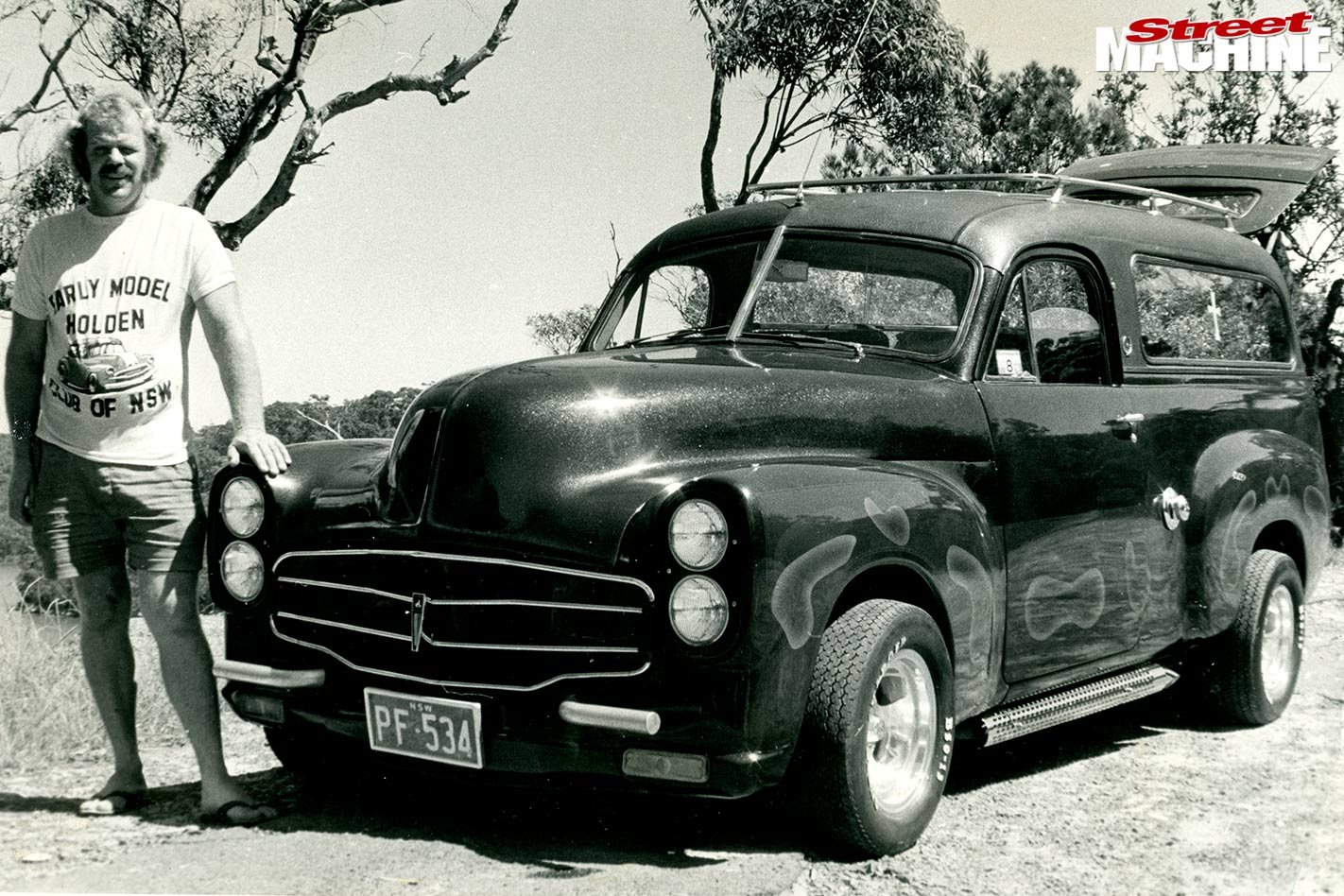 Pat’s FJ as featured in Van Wheels, before it got its Frank Lee murals.  As a hearse, the body was extended 10in at the rear, with a single-piece tailgate and a split bench

The parts spread deep into our yard too — anywhere he could store them. I remember Dad chlorine-bombing our murky green pool to get it ready for summer. When the waters cleared, he found a heap of FJ guards that had fallen in off the roof of the shed!

There were so many people who knew Dad and we are so grateful to everyone who attended his funeral at the Summernats track, and his burial at the Queanbeyan Lawn Cemetery. It was lovely to catch up with so many of his friends and we were humbled to meet so many people who passed on their condolences and spoke so highly of him. My daughters, Jessica and Fiona, raced their Modified drag cars in his honour at Sydney Dragway.

As a tribute, we will rebuild Humpy Mekka to its former glory. It will stay in the family and we hope to show the car as much as possible before putting it on permanent display in a museum. Of course he wanted to make his last ride in his hearse but we hope to make him proud by introducing his FJ to a new generation of car enthusiasts.