THOSE of you with longer memories may recognise this as the ex-Ron Bevitt Bat Mobile. A member of NSW’s first hot rod club, the Romans Hot Rod Association, Ron converted his four-door sedan into a two-door coupe, using measurements from a 1/25th scale model! 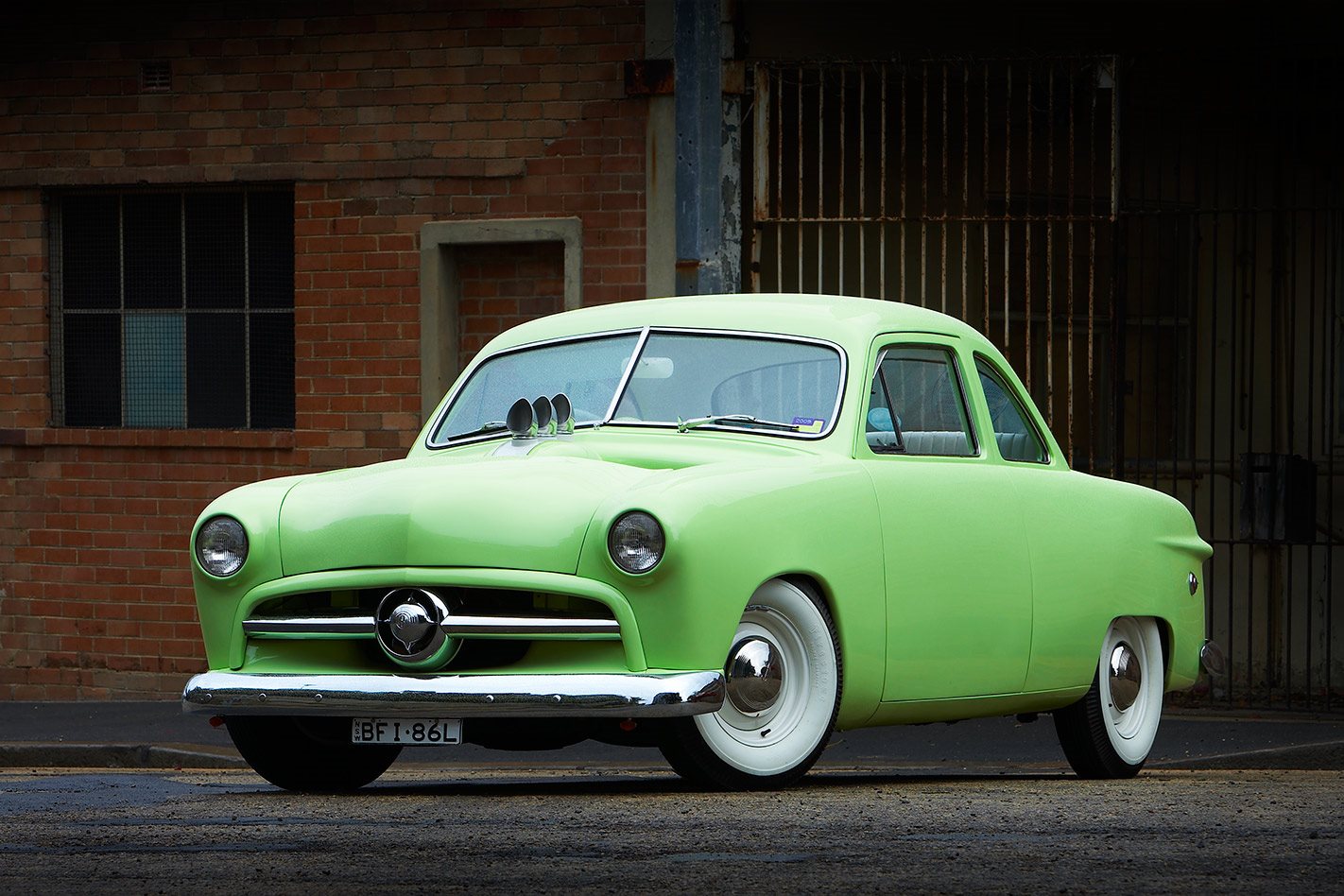 With rolled pans front and rear, a custom grille and swoopy fins that gave the car its name, it was a regular on the show scene and at Castlereagh Dragstrip, picking up Top Radical Custom at the ’69 Roselands Show and running 14.81@99mph!

Coated in Dulux Wildfire Emerald Green by Ron, and highlighted with scallops and pinstriping by fellow Roman Warren Dudeney, it was as nice as any custom you’d see in a US magazine. 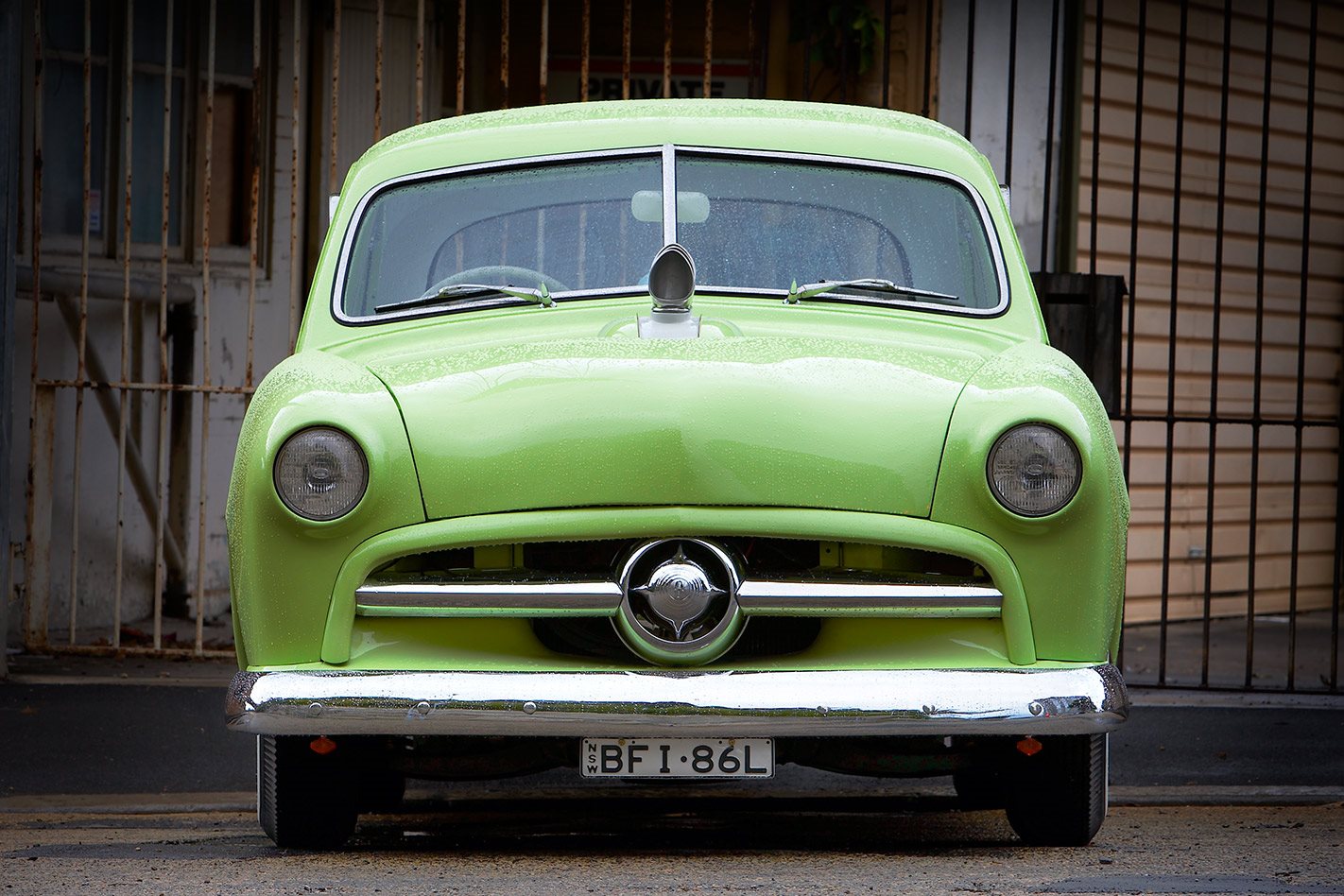 Ron sold the car in the early 70s and legend has it that it was seen a couple of times in car yards along Parramatta Road. Eventually the car made its way to the Northern Beaches, looking much the worse for wear. Used as a daily driver, it’d lost most of its identifying features. Gone were the fins and custom front-end; the gorgeous deep green paint had been covered with a coat of Polar White, and the once pristine red and white trim had been dyed brown!

In early 1983 Ron got a call from an old friend, Dennis Williamson. He’d found the car for sale at Avalon — for $500. Ron dragged it home but it was in such a sorry state that it sat untouched for 12 years. He couldn’t bear the thought of doing it all again. 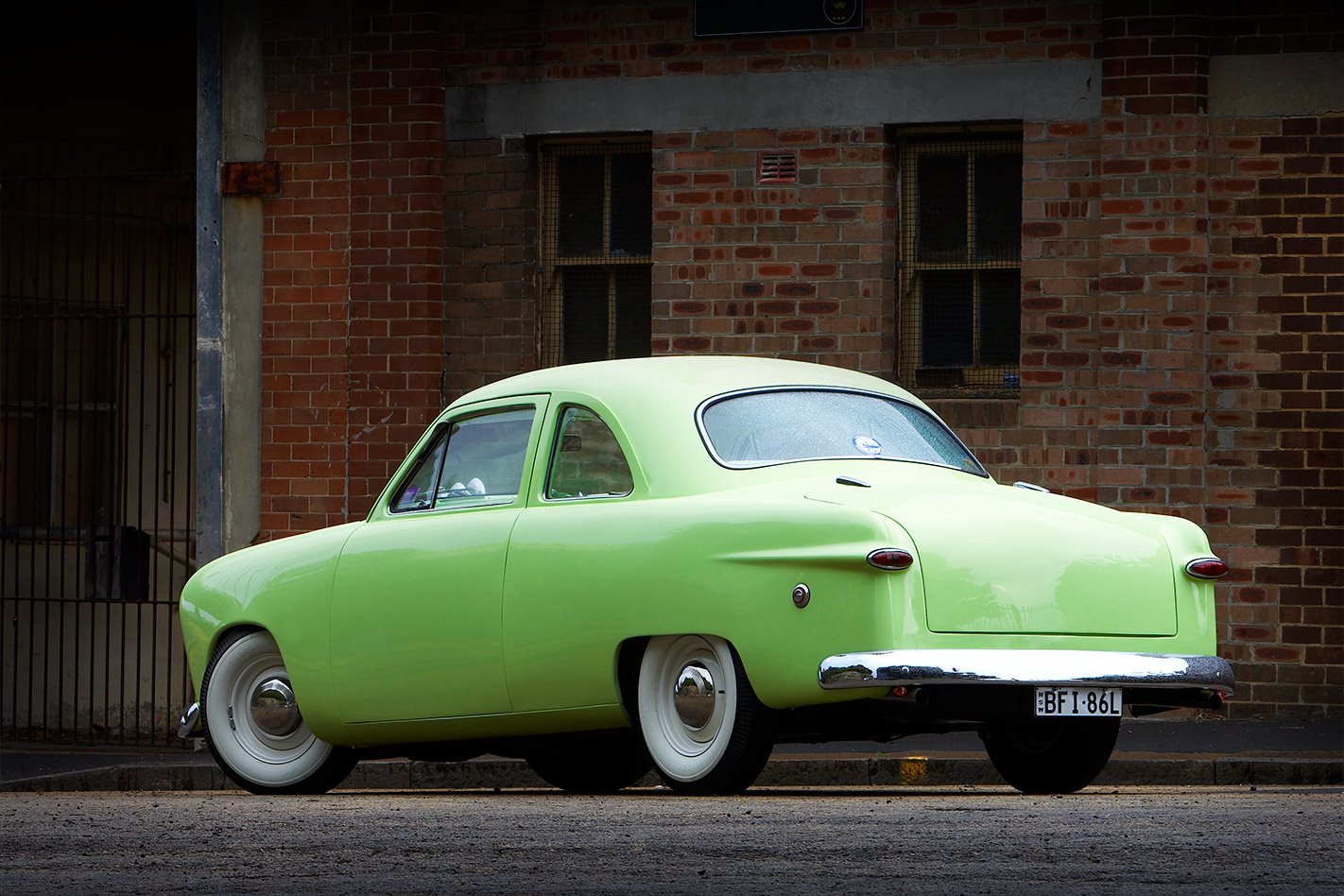 So Dennis bought the car off Ron but the dreaded tin worm had taken hold and the more he dug, the more he found. Over the years he replaced floors, quarter panels and door bottoms, then slotted an HQ Holden front end in, but there was still plenty to do.

In 2005 George Livas stepped into the picture. George has built a few Mustangs as well as a Model A roadster and Model T coupe, but he’d never attempted a 50s car before.

“I wanted a Spinner but couldn’t find one — or they wanted too much money. I went around to look at the car with a few friends and they all said I should walk away but after some consideration I ignored their advice and bought it anyway,” George says. 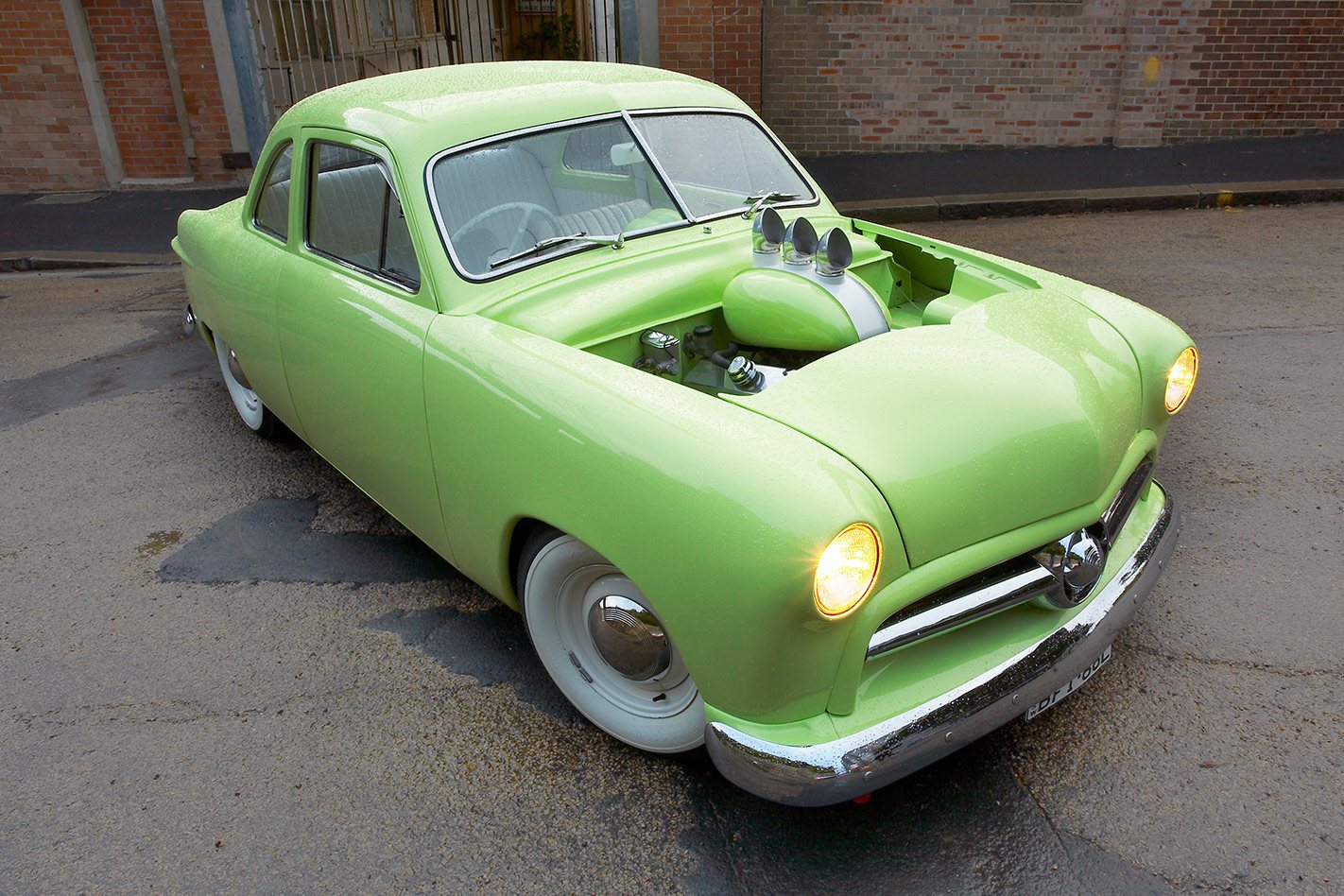 He came up with a plan to get the car finished in 15 months but it blew out to almost three years.

“Even though all the rust and sheet-metal work was done, the panels were badly out of alignment. I shaved the door handles, welded up all the holes, including 40 or so in the engine bay,” he says. 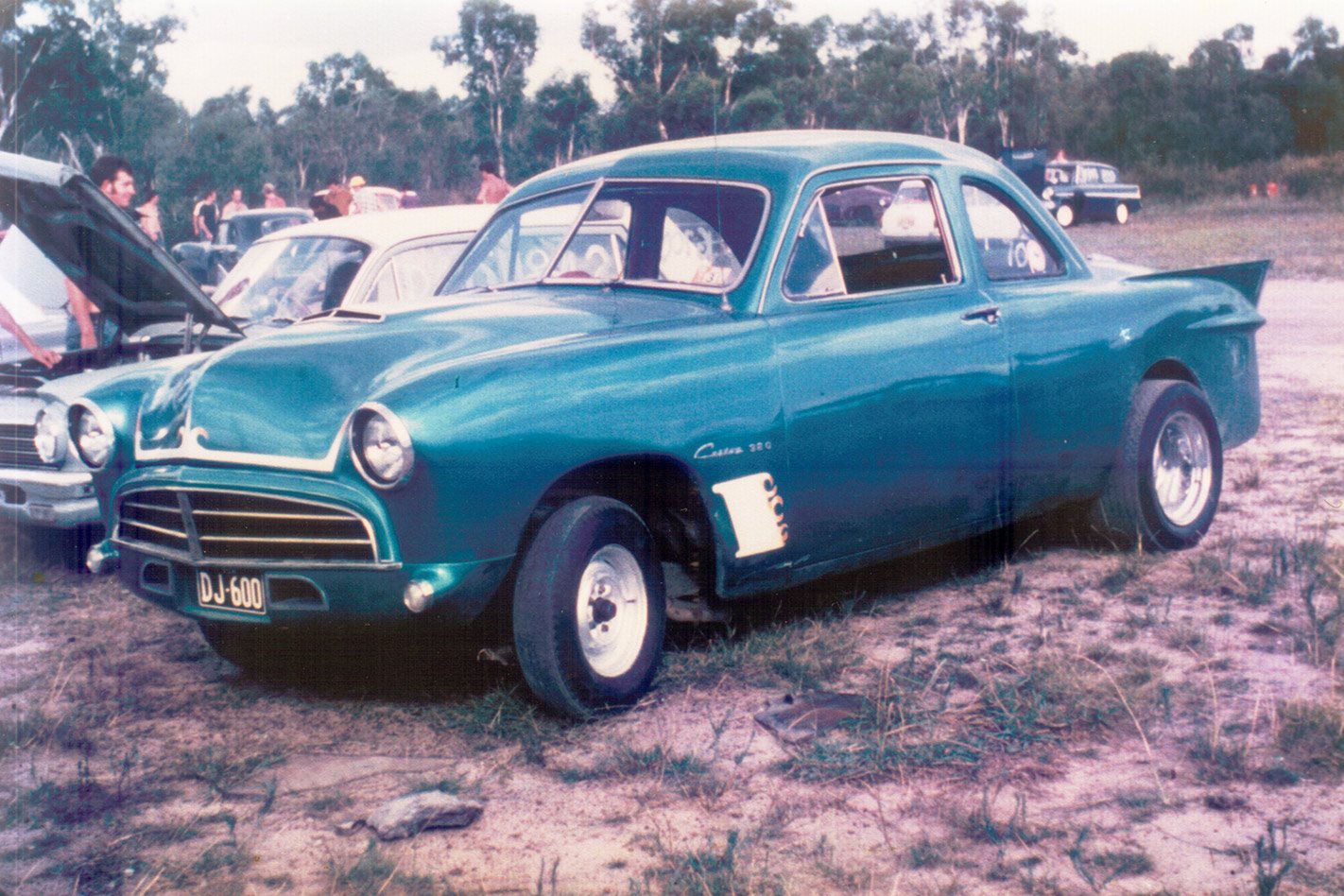 In its previous life, the car had run a 318 Dodge Poly engine and TorqueFlite transmission. They were long gone and due to availability and price, George used a 351 Cleveland. It’s a 2V warmed over with a Crow 525 cam, Edelbrock intake and a 750 DP carb. Genie Falcon extractors help it breathe, while a T-5 five-speed ’box makes it easy on the highway.

George knew a Clevo wasn’t traditional in a 50s custom, so he did a few things to distract attention from the donk. 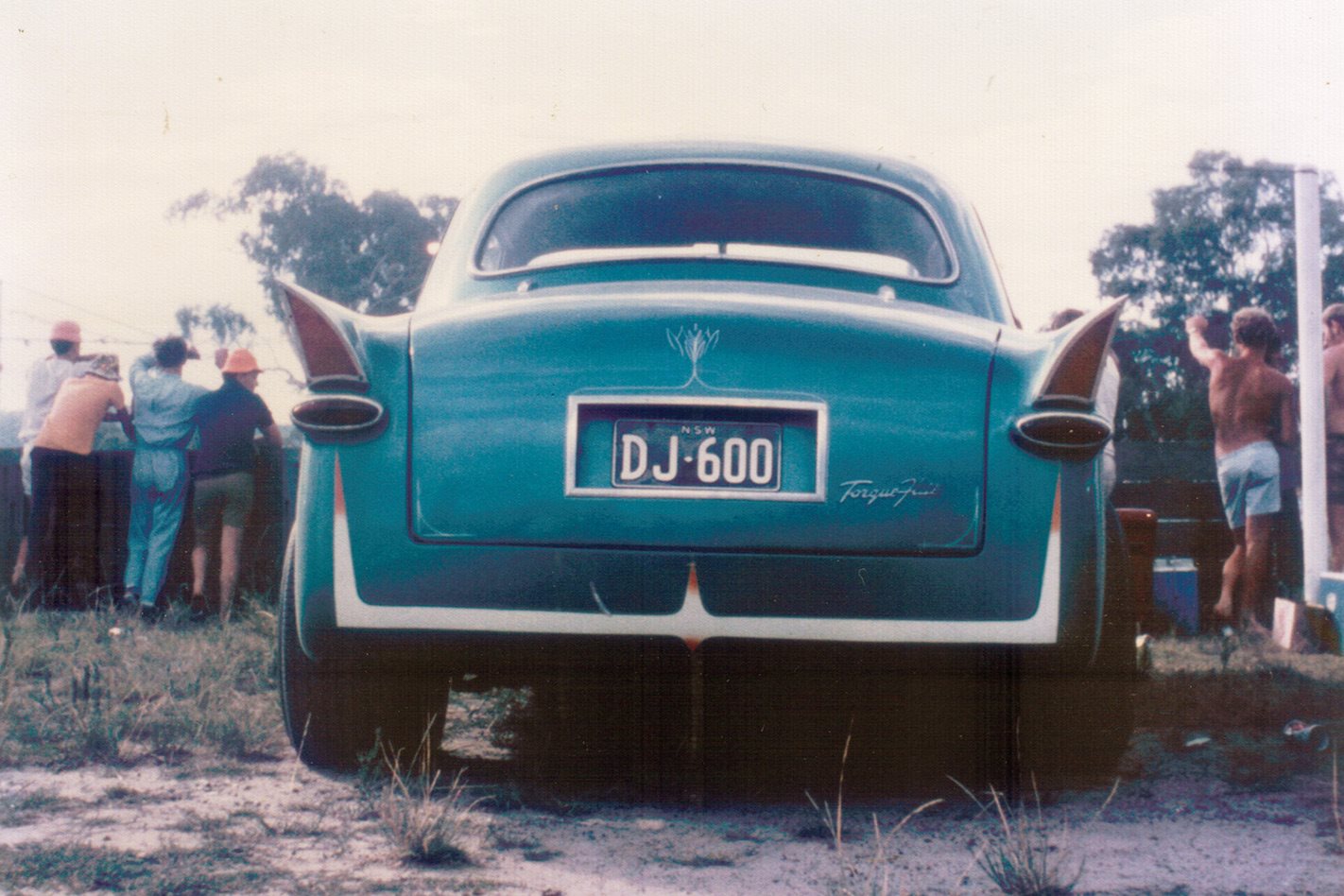 “My brother John is into BSA motorcycles and they made a fuel tank that was finned and chromed. I kept thinking: ‘How can I incorporate that look into the car?’ I wanted a nostalgic look with triple carbs or something,” George says.

He ended up widening a tank to better suit the proportions of the carby scoops. The overall effect may not suit all tastes but you certainly don’t notice the Clevo first! It’s a defining feature of the car now and definitely gets people talking. 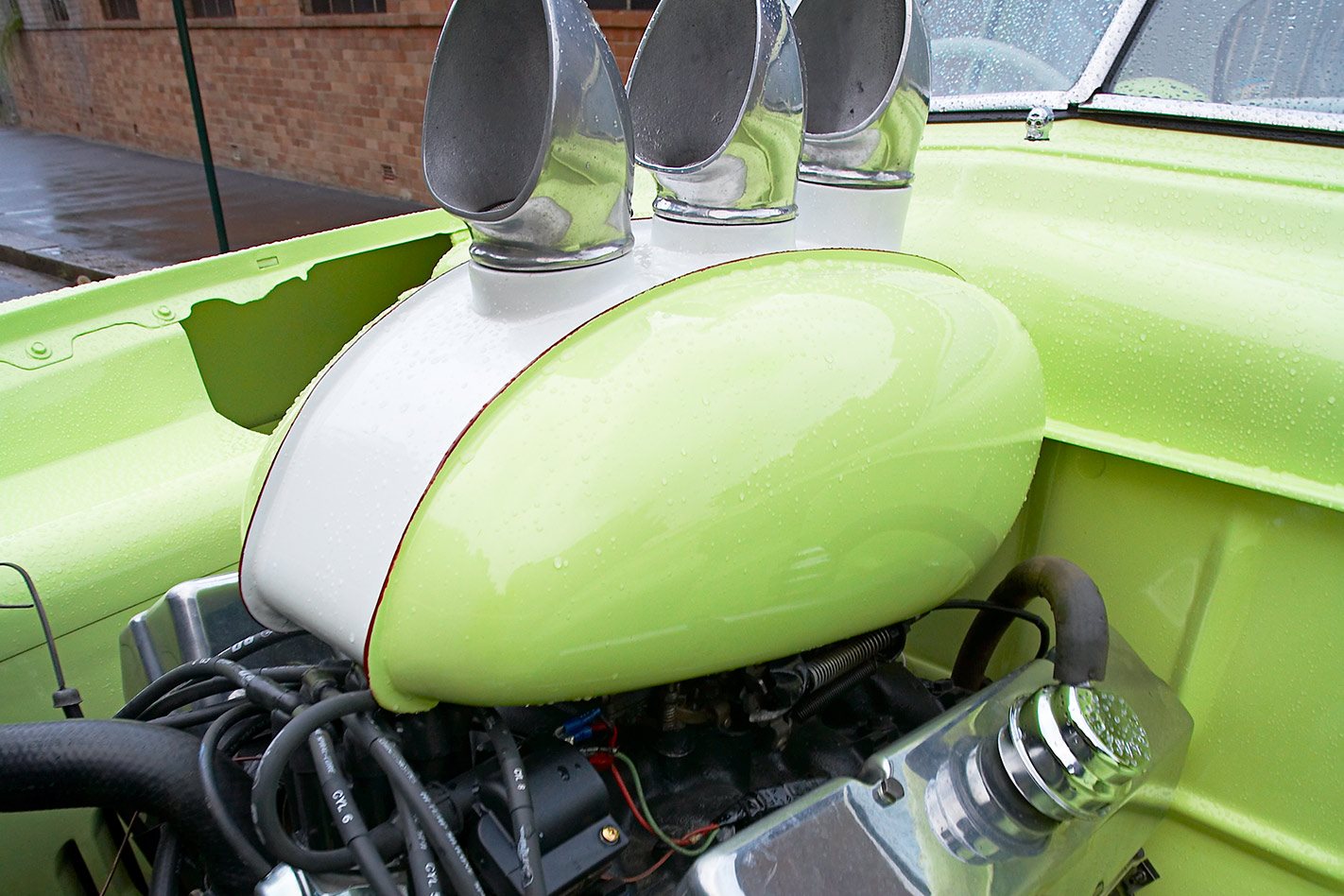 Initially the bike-tank air cleaner was set up so that the three air cleaners stuck out of the bonnet but it just didn’t look right to George: “The bonnet was too big, so I pancaked it and cut it down to a quarter-bonnet, matching the shape of the cowl but with more exaggerated lines.”

He was pretty happy with the results but brought in the experts to be sure. 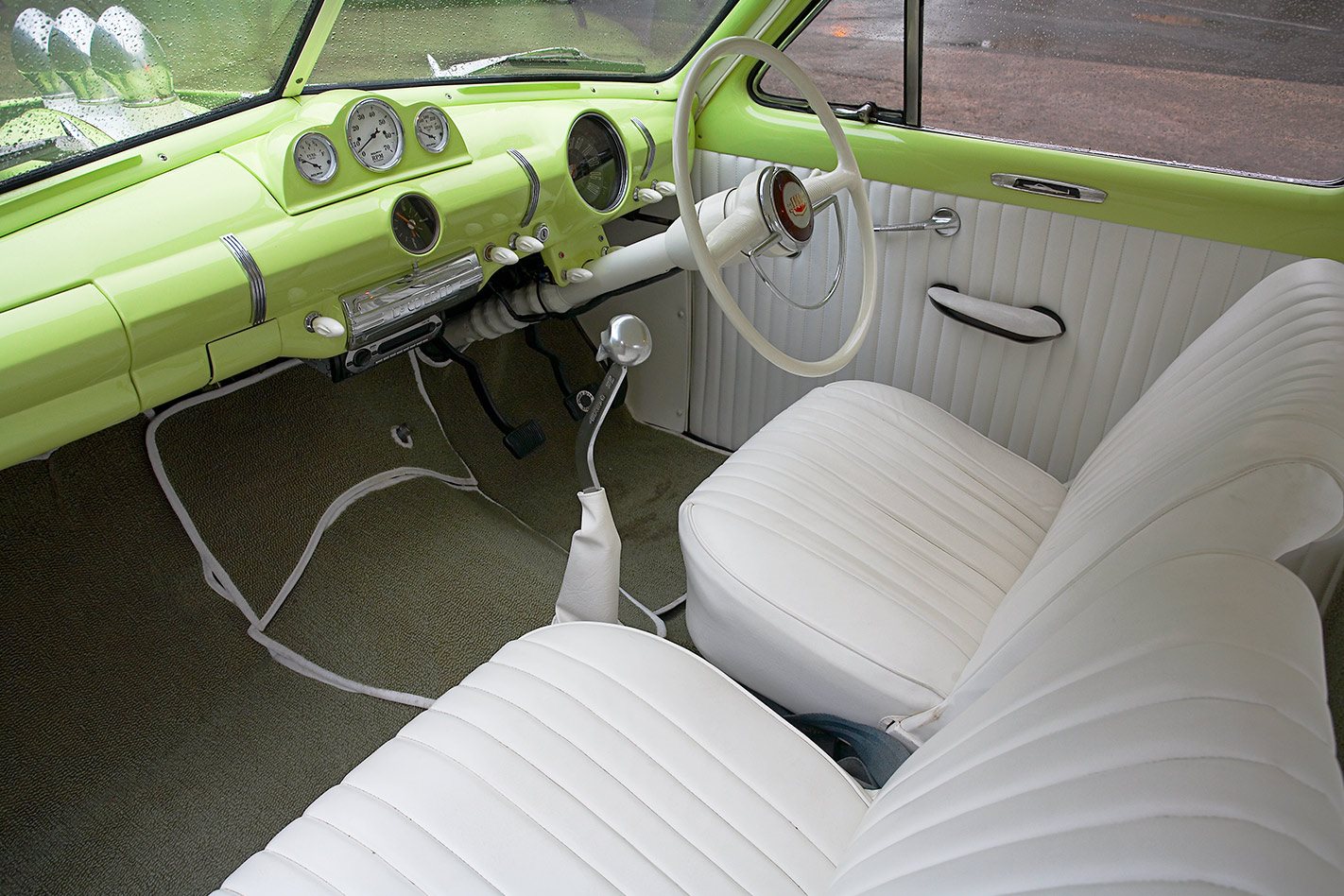 “I called James Livas, my nephew who is in Industrial Design, and asked him to make sure the bonnet, cowl and air cleaner were all in proportion to each other. He came around with his mates — you’ve got to get the young guys in and see the look in their eyes, then you know if you’re on the right track.”

Next it was given a coat of Stream Green by the boys at BT Collision — a lot more subtle than before but still perfectly suited to the car. Wheels are simply steel smoothies with ’48 Ford pick-up caps and Firestone wide whitewall tyres. 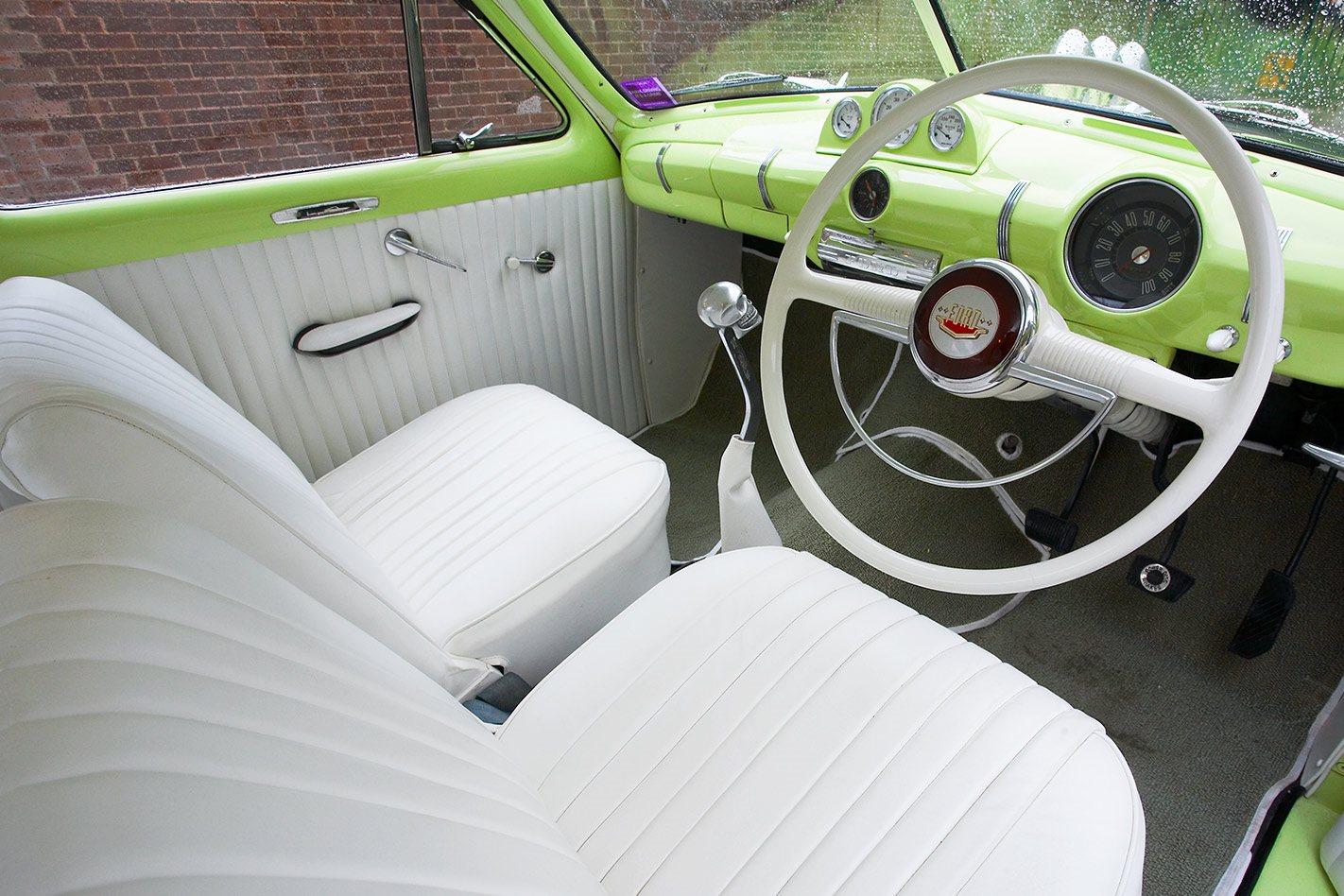 Inside is simple; a couple of Austin 1800 buckets and a custom rear seat covered in off-white tuck and roll. The dash is original but features a very important part of the car’s history. 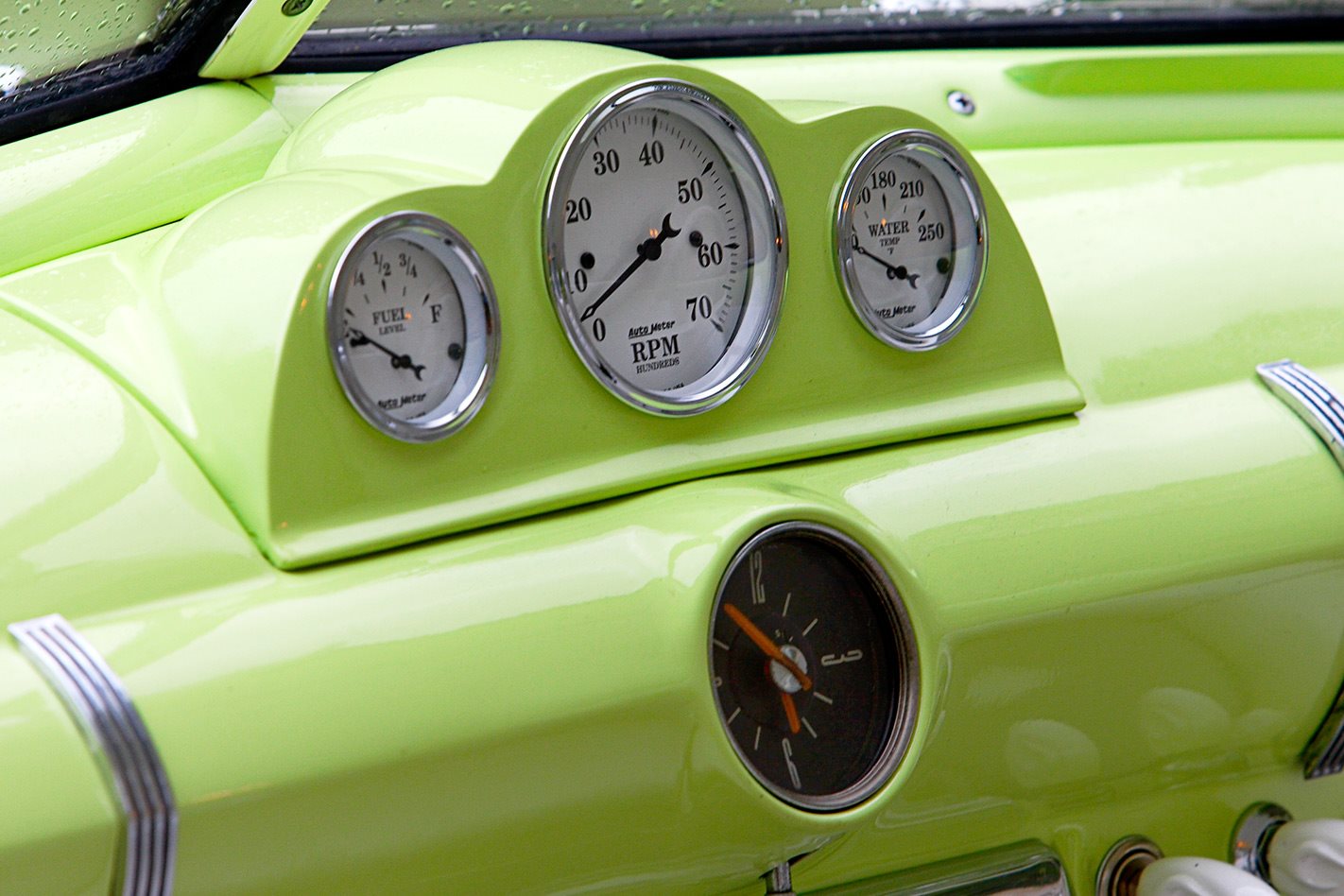 “People who know the car recognise the gauge pod straight away. It was made by Ron all those years ago and all I did was sandblast it, wipe a little bit of bog on it to smooth it out and paint it,” George says.

“Not long after I finished the car, I took it to a Roman’s burger night. Some of the older guys couldn’t believe the car was back on the road and they were rapt with the job I did on it.” 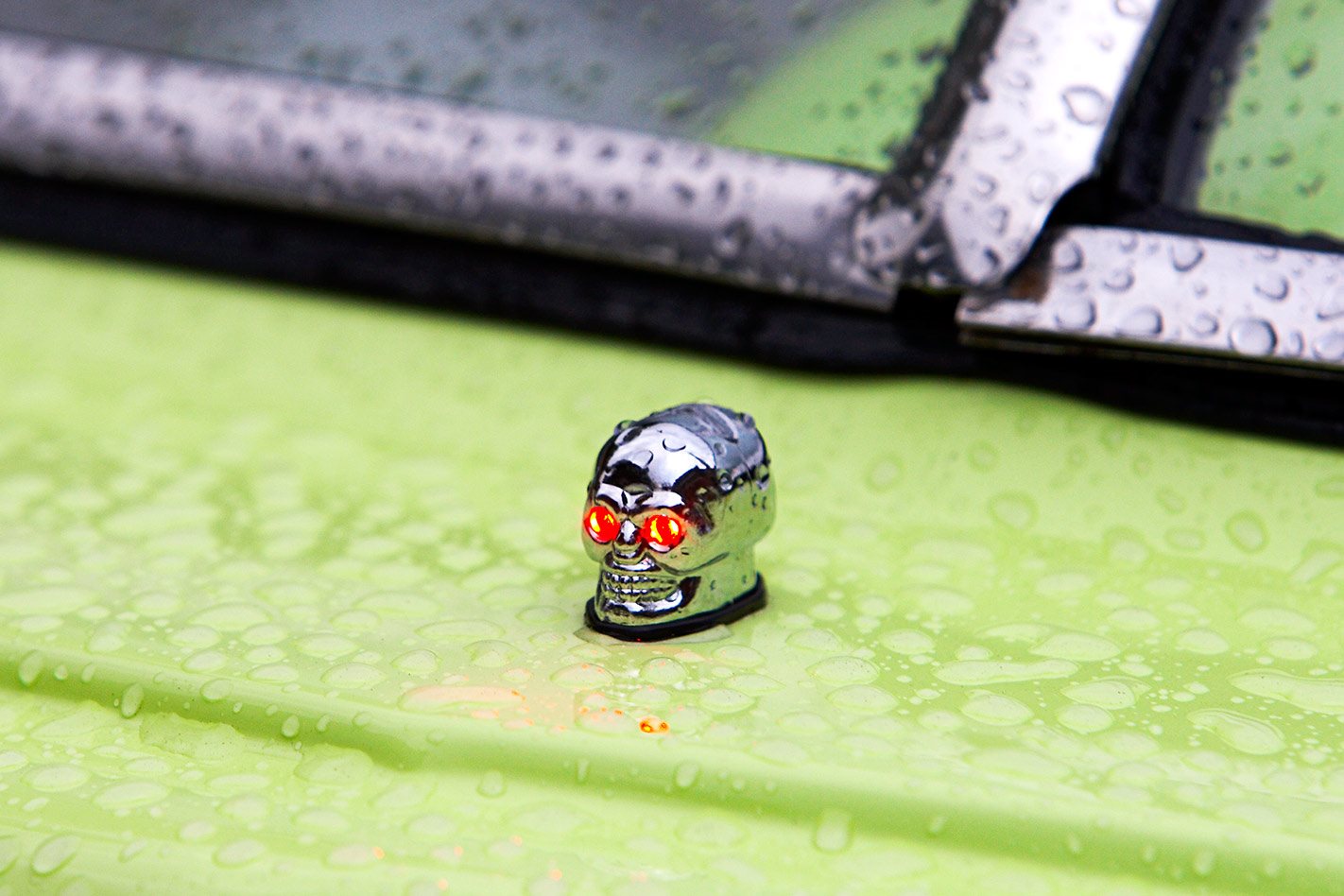 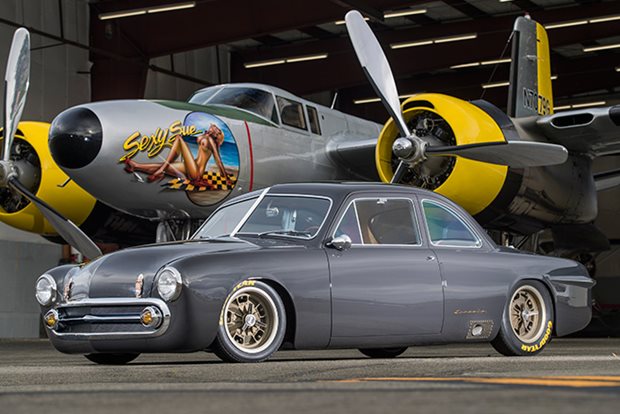 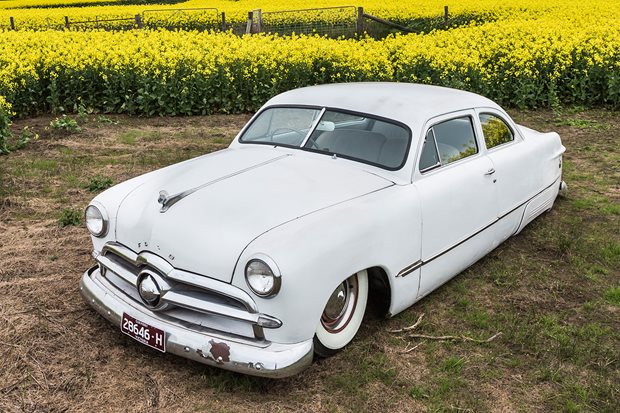 Leon Davies never got around to chopping this ultra-cool spinner before selling it, but its new owner agreed it needed an altitude adjustment – and Leon was just the man for... 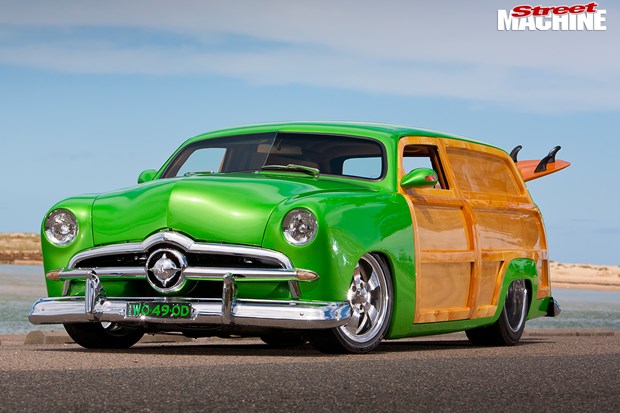