Too many cars, not enough time is why Adam Cassar says his gleaming gold Falcon XP coupe took six years to finish

Nothing like impending nuptuals to get you to pull your finger out, as Adam Cassar did to finish his sweet Ford XP coupe

TOO MANY cars, not enough time. For Adam Cassar it’s a great problem to have and it’s the reason why his gleaming gold 1966 Ford Falcon XP coupe took six years to finish. 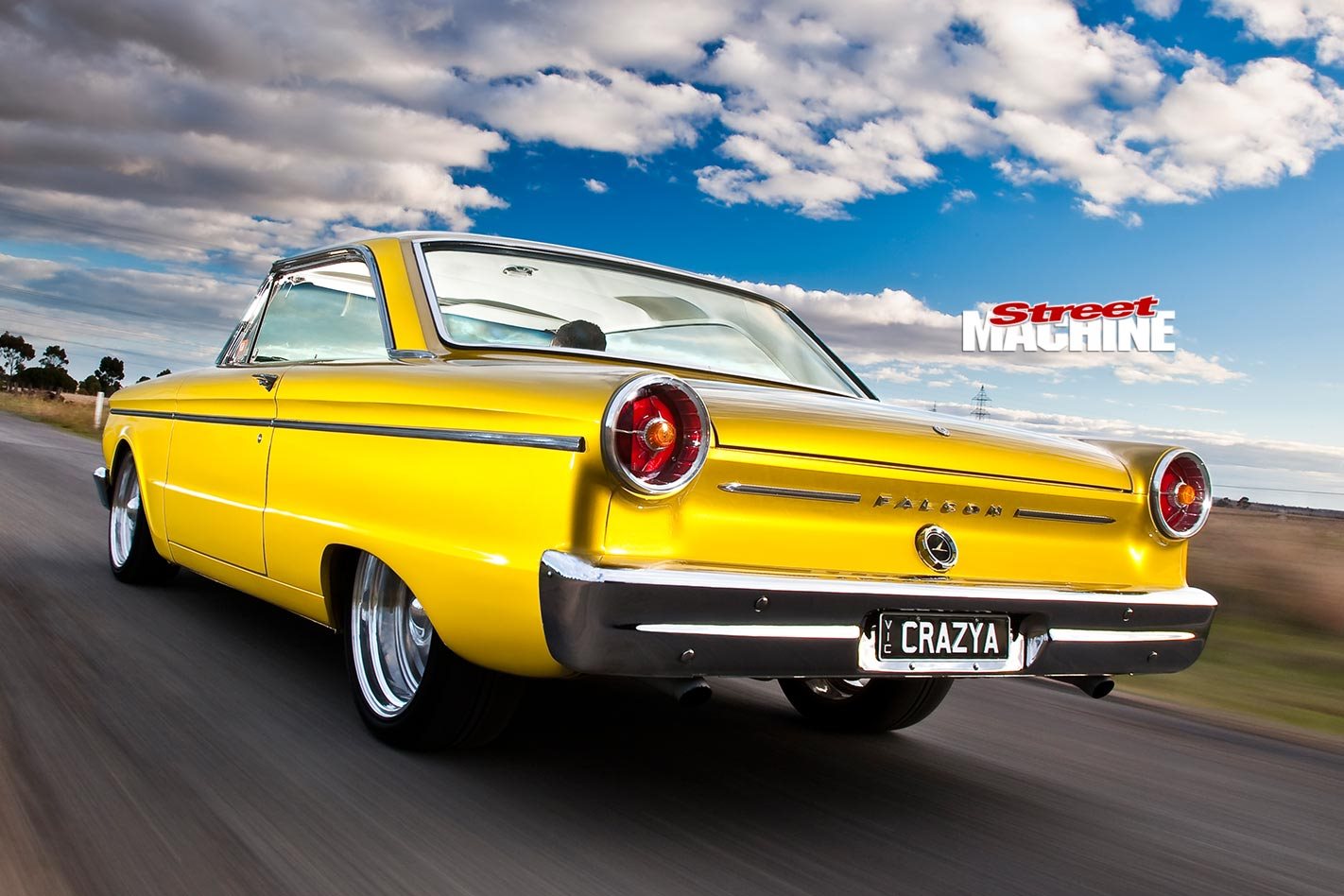 Adam deleted the badges, apart from the one on the boot. He reckoned it looked good there and needed to stay. All that stainless steel was on the car when Adam bought it and rechroming brought it up trumps

A panelbeater by trade, Adam works for the family business — Fast Lane Speed Shop in Ballarat, Victoria. So with customer cars taking priority and the family’s own collection of cars needing attention, the XP took a bit of a back seat. Until Adam’s sister announced she was getting hitched and wanted it for the wedding, when he threw himself at the build to ensure it made it to the church on time. 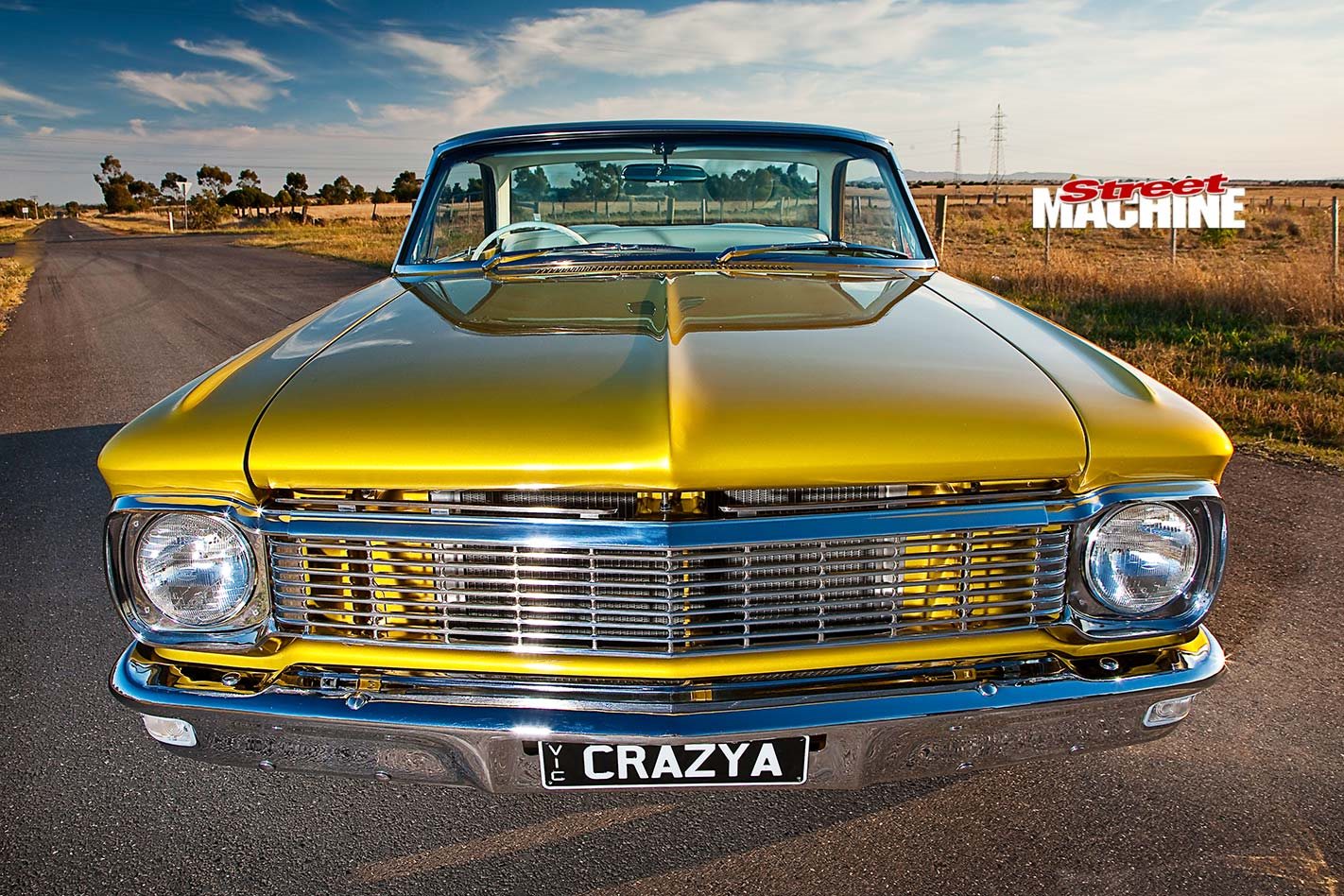 “I’ve always liked the coupes because they’re pillarless and they look like they’ve had a chop, the roofline is so low,” he says. 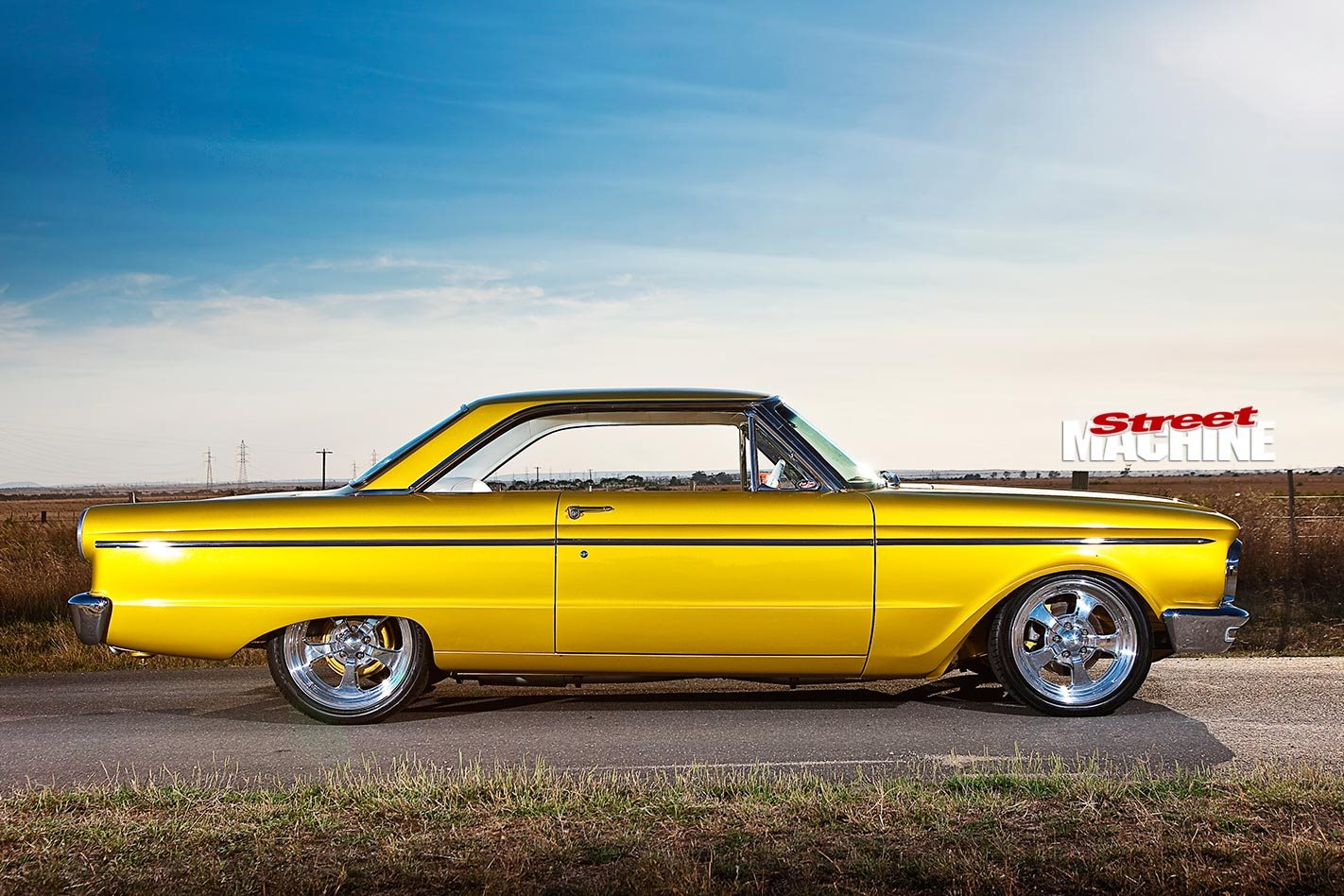 Finding one in the first place wasn’t easy and 10 years ago he decided to settle for a four-door he’d seen advertised. To his surprise, he hit pay dirt when he asked about rust in the rear doors.

“The lady said it didn’t have any — doors that is. Checking out the car later that day, I bought a two-door hardtop for only $3700.” 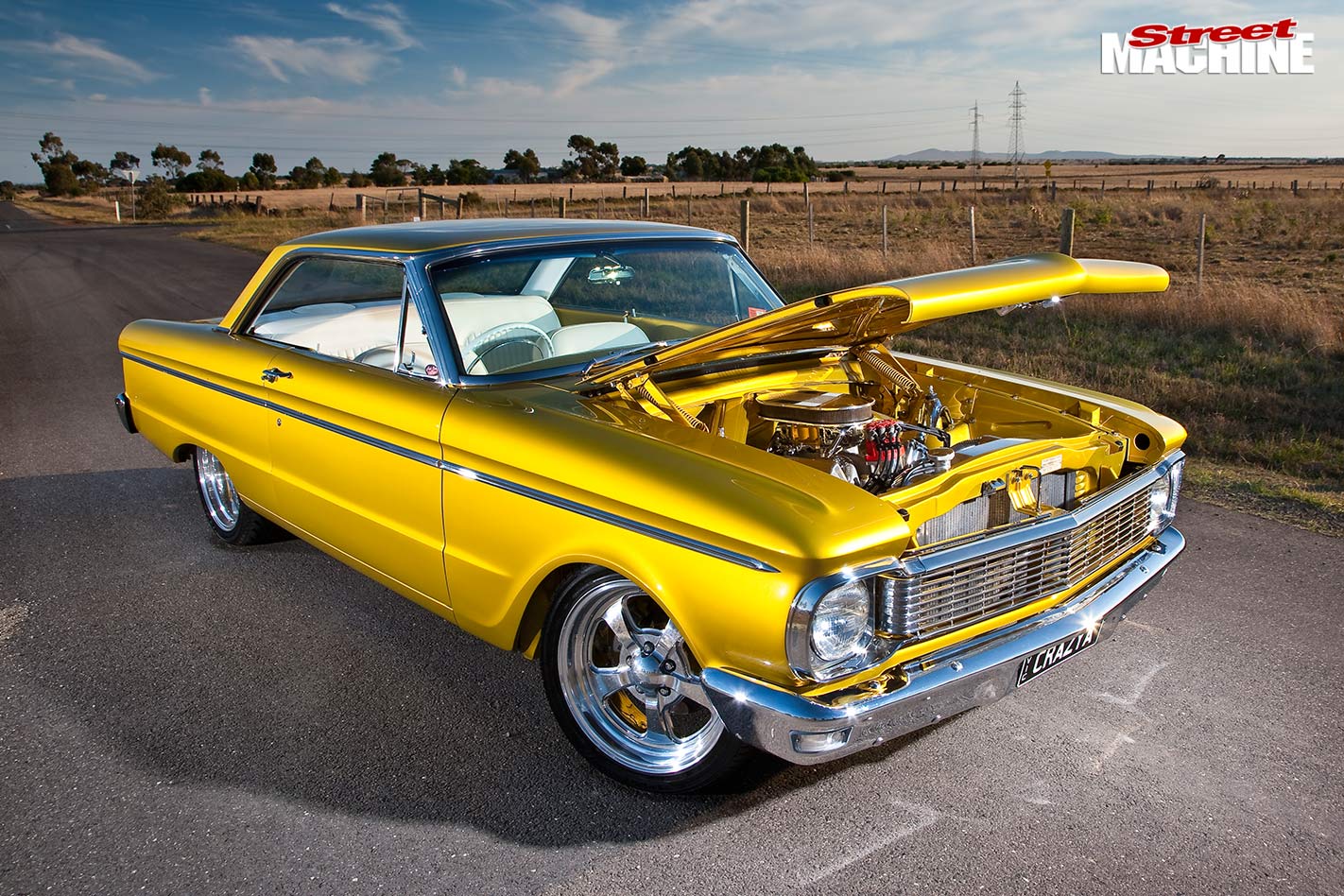 Body-wise there was little damage to speak of. Sure, the paint was peeling away but there’d been no attempt to restore or modify it — just what Adam wanted. 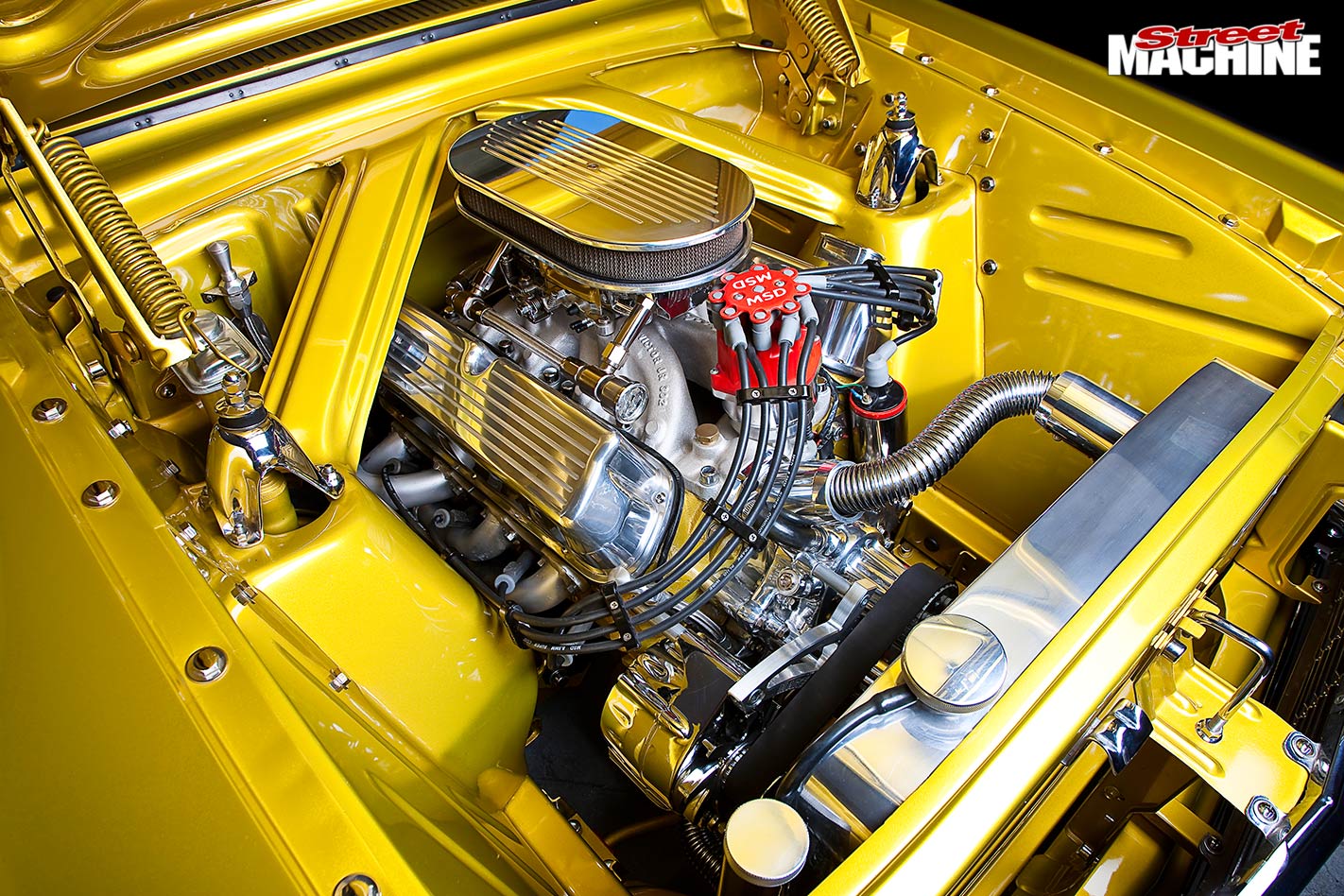 The battery’s been taken out and now lives in the boot. That created some room for the 302 Windsor V8, Tri-Ys and aluminium radiator. The inside of the engine bay was smoothed

“I always buy a car nobody has touched,” Adam says. “The paint had been sunburnt right off, though. It had been metallic blue and wherever it had wear it was red oxide.” 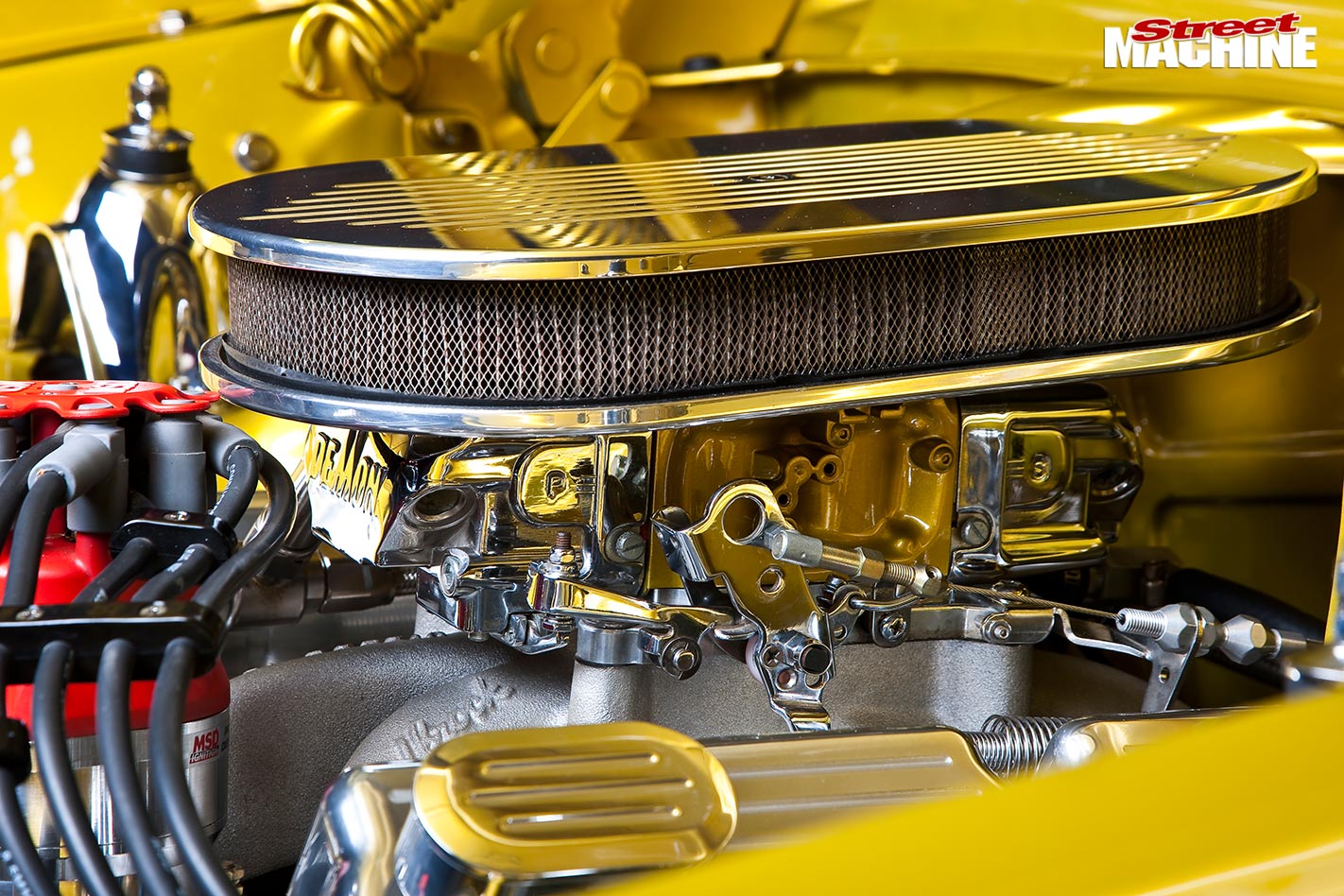 It’s at this point you need to know that the coupe sitting in Adam’s shed was always going to come out looking kickarse. He’s got that special type of talent for bodywork.

“There are a lot of changes to the body,” he says of the work he did in the shed. “I like doing everything subtly so nothing stands out. Some people go radical; I just like everything to blend in. 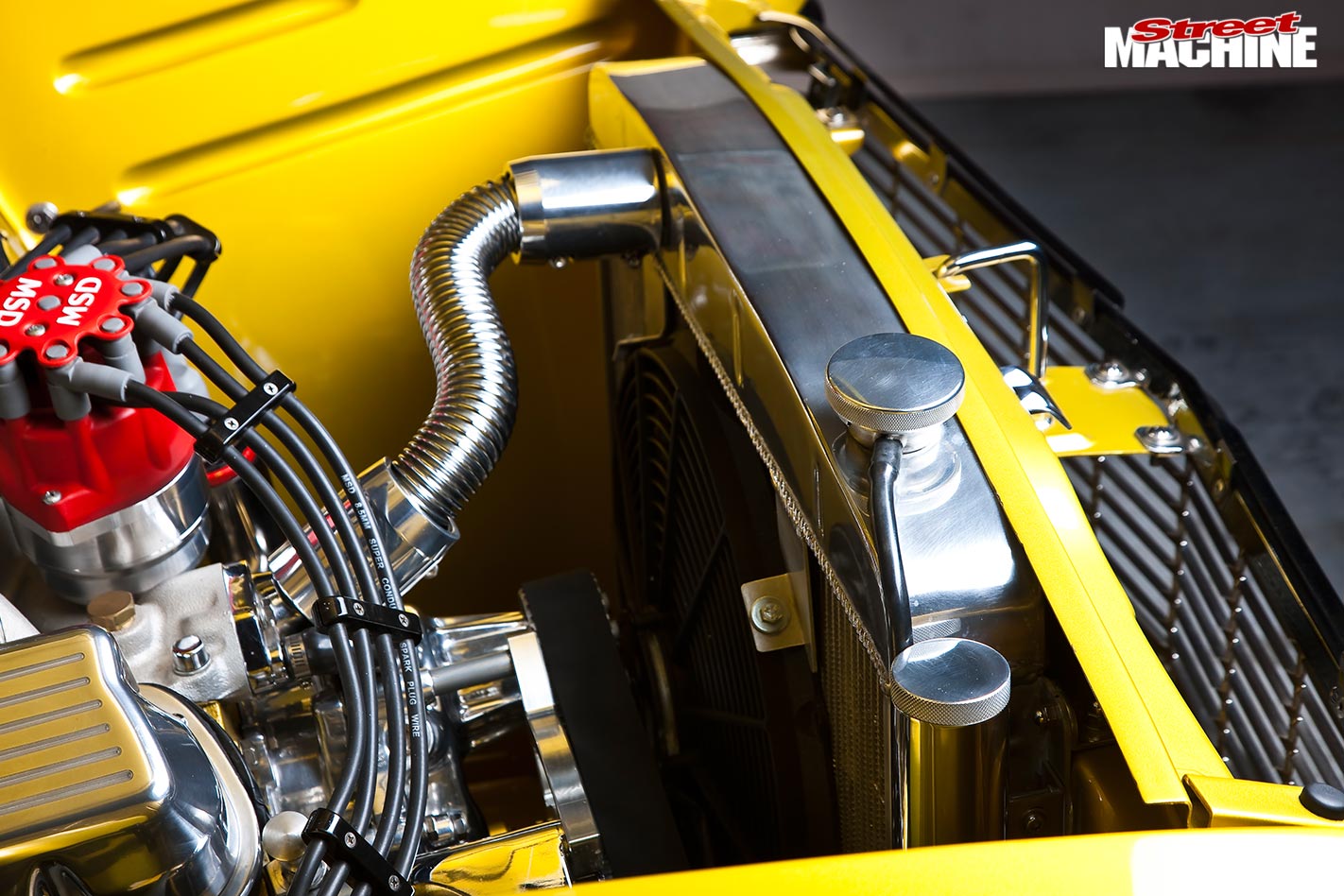 “The engine bay looks standard but it’s not. The battery’s been put in the boot, the radiator supports were widened to fit a bigger radiator and I smoothed the bay.

“The front guards have been mounted and fitted so the headlights fit perfectly and the nose of the bonnet’s been peaked.” 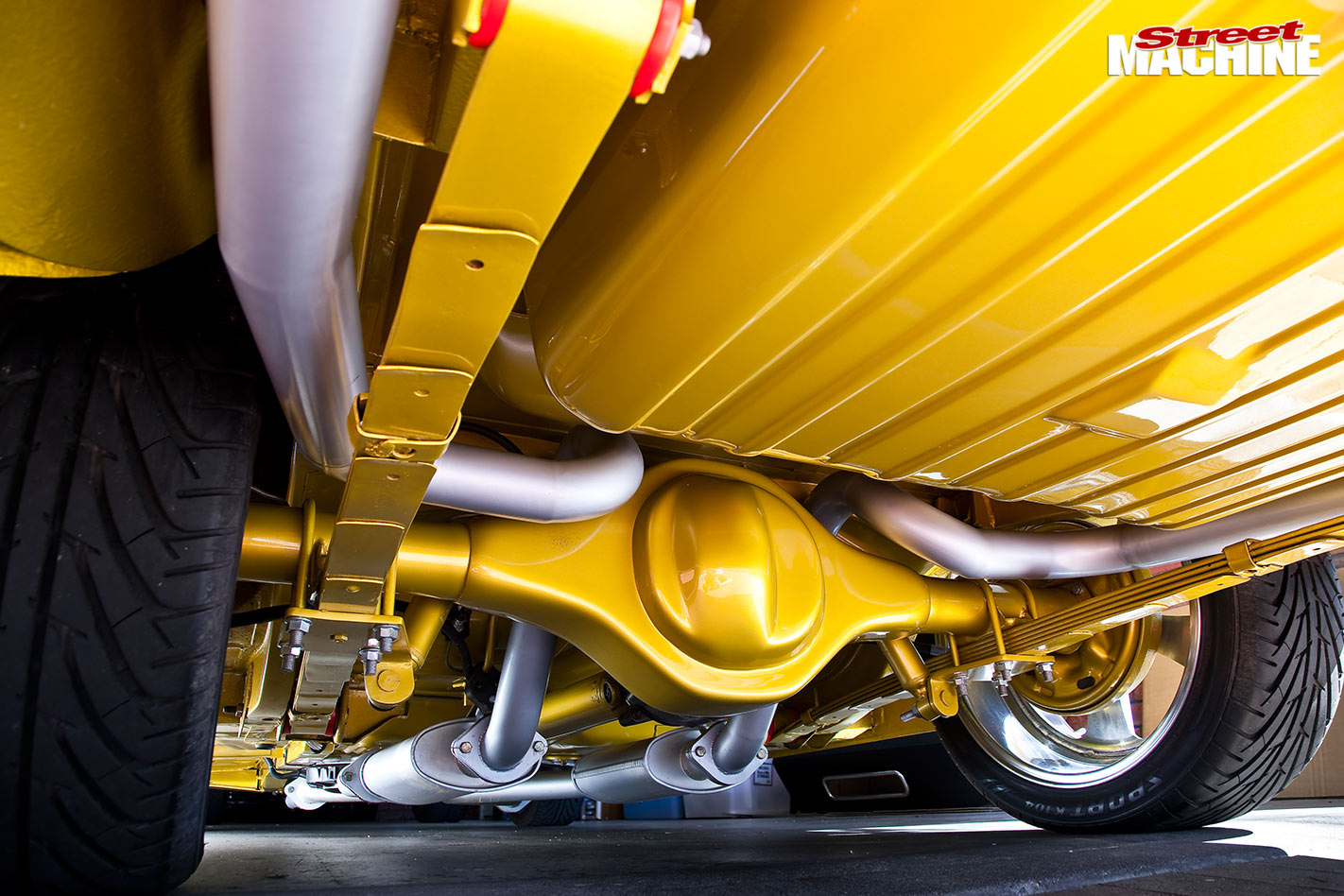 Adam also set out to make the factory lines in the bodywork sharper and realign the moulds. Once it’s pointed out it becomes easy to see. “Pretty much any line that has a sharp edge has been sharpened up. All the lines on the roof have been sharpened too — they’re supposed to be semi-round. I just body filed them all. Even with the primers and stuff, you just don’t break the edge. I just blocked them so it kept a sharp line — that’s really it.” 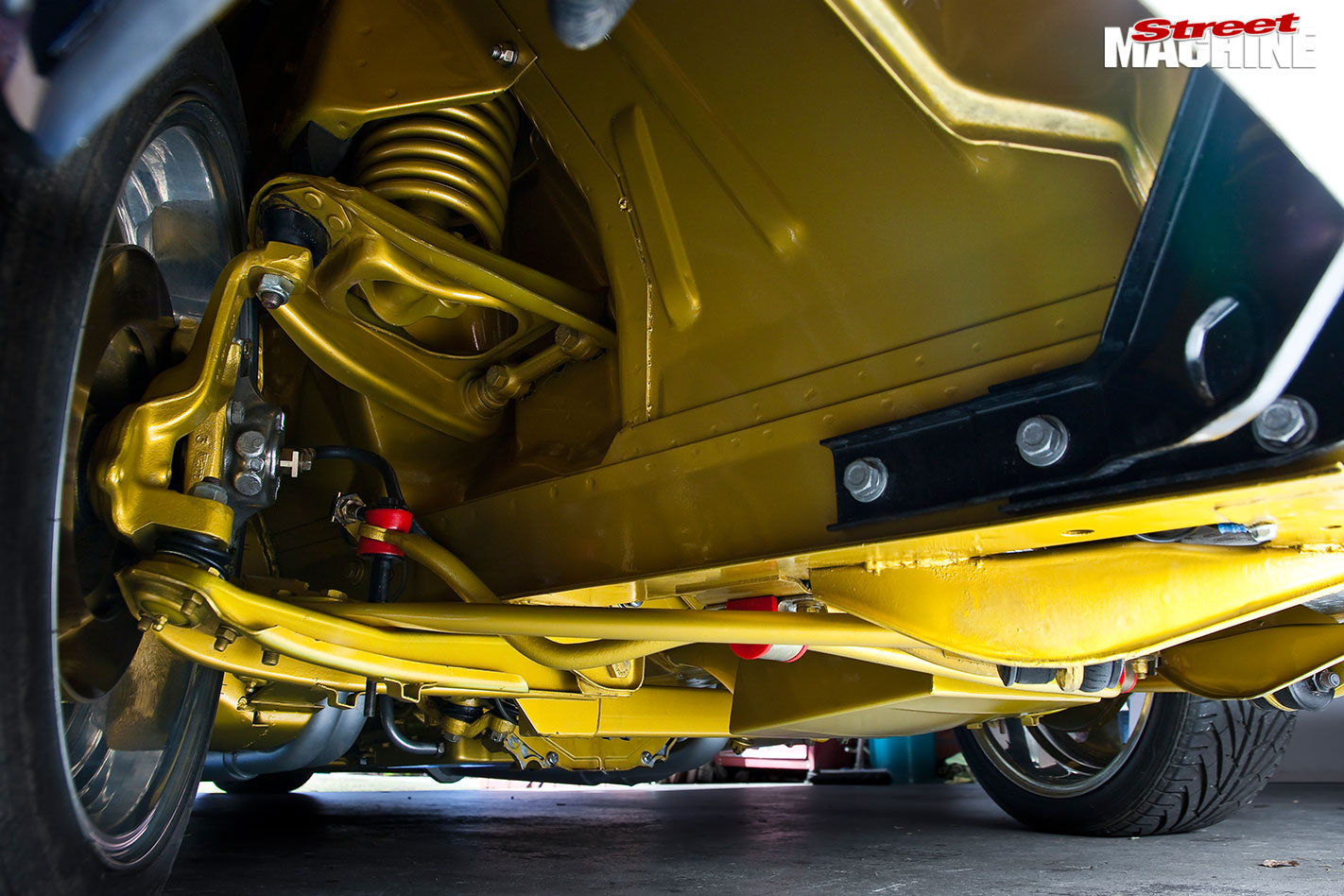 Stance was another important factor for Adam, so the rear wheel-wells were mini-tubbed to fit 18-inch Billet Specialties (17s on the front) and the car was lowered before he applied the radioactive-looking paint. 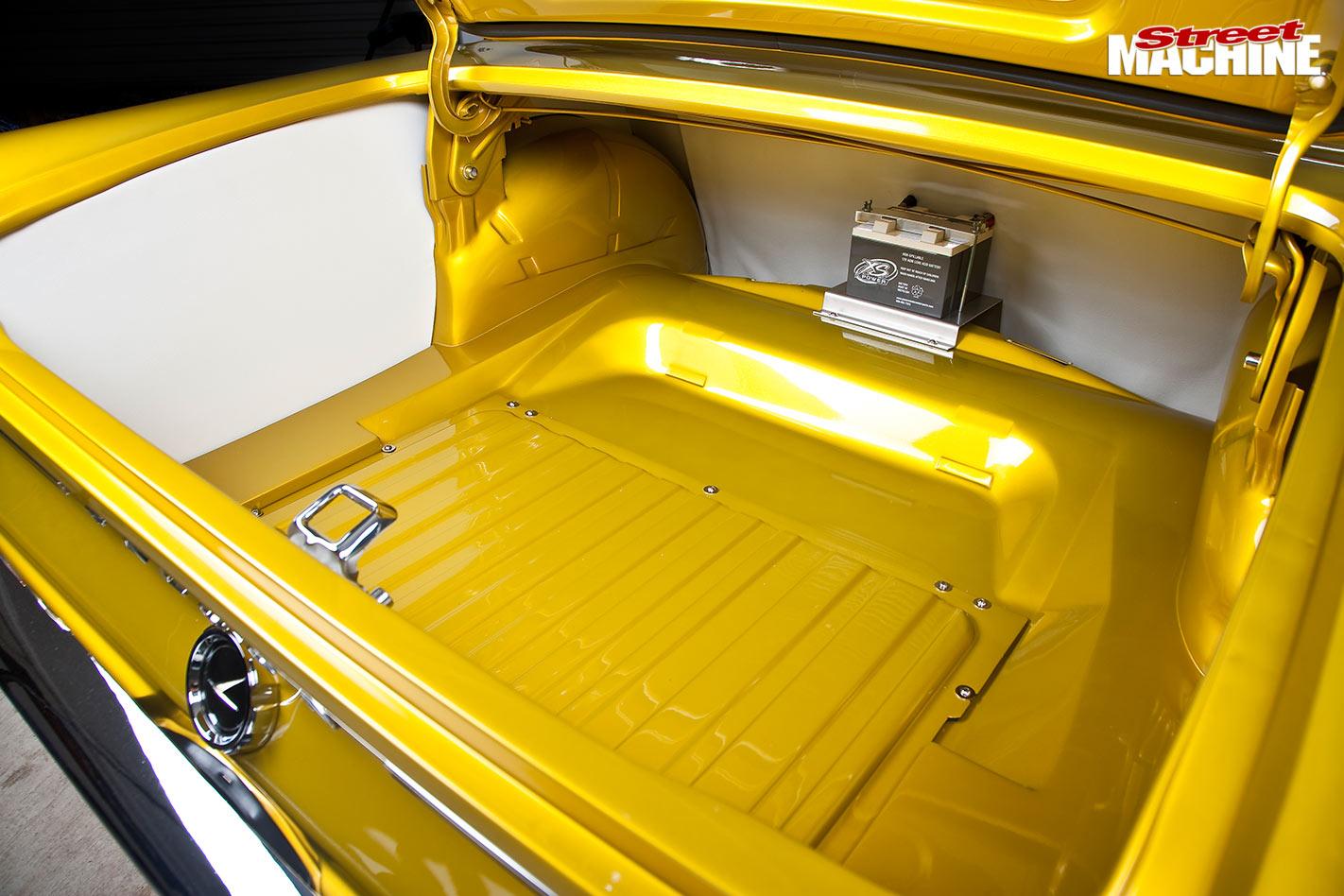 “I wanted something that wasn’t too lairy and I wanted it to look old-school, close to the colours that came out in the 60s and 70s but a bit brighter.”

Then came the trim, which took a bit of thought because Adam wanted to build a Falcon that appealed to all ages while bringing a bit of hot rodding into the mix. 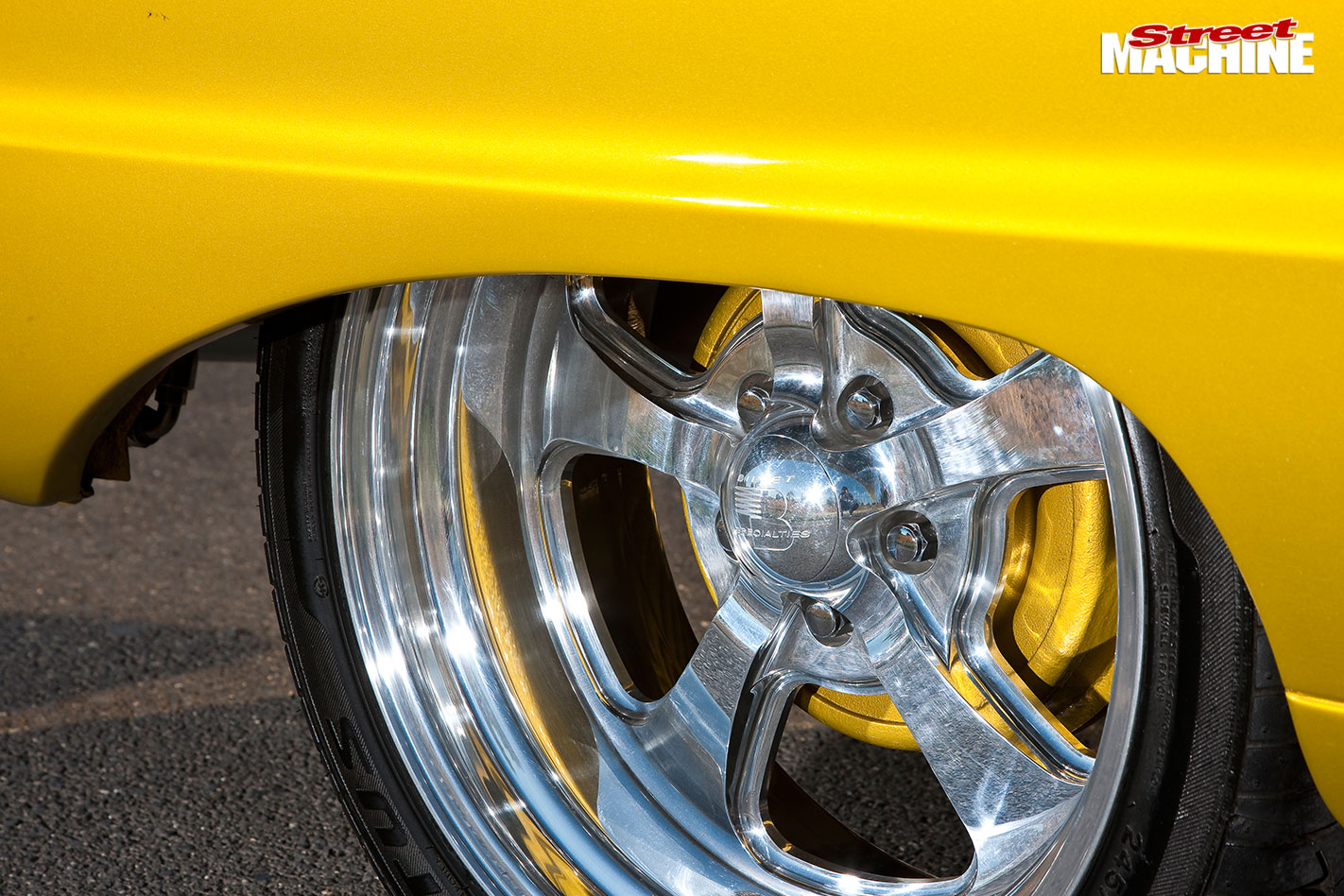 To achieve that, a pair of Falcon Sprint seats and the door trims were wrapped in new white tuck and roll trim.

With all the white it needed to be broken up so the black carpet was added after the padded dash was removed and the exterior paint scheme continued into the cabin. 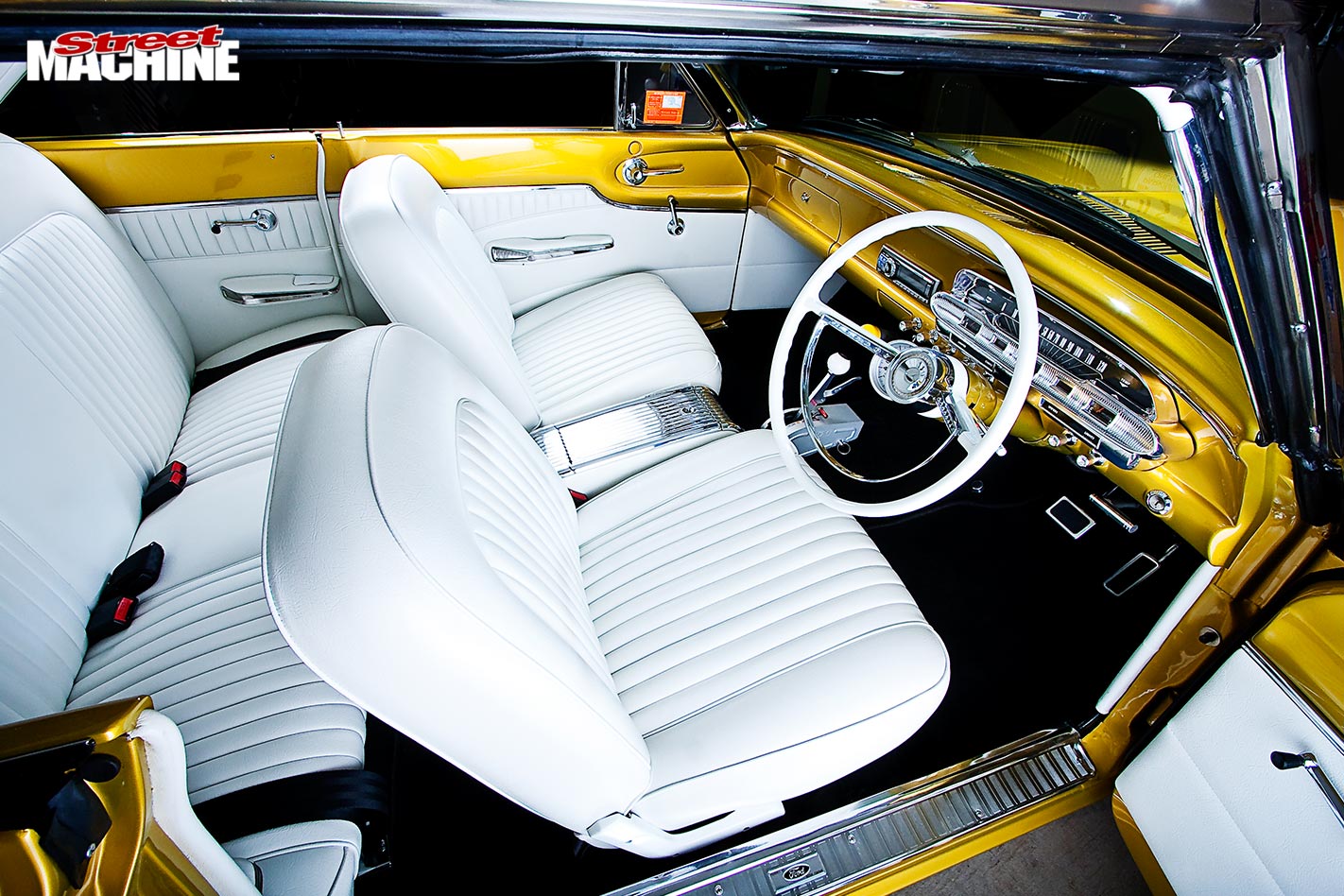 Keeping the old-school look, the original steering wheel and speedo stayed, with the centre console from an XM added.

The chunky tacho and shifter are the main modern giveaways. Oh, and the radio. The previous owner had cut the hole in the dash and put in a tape deck so Adam decided to leave the hole and fill it with his own radio. 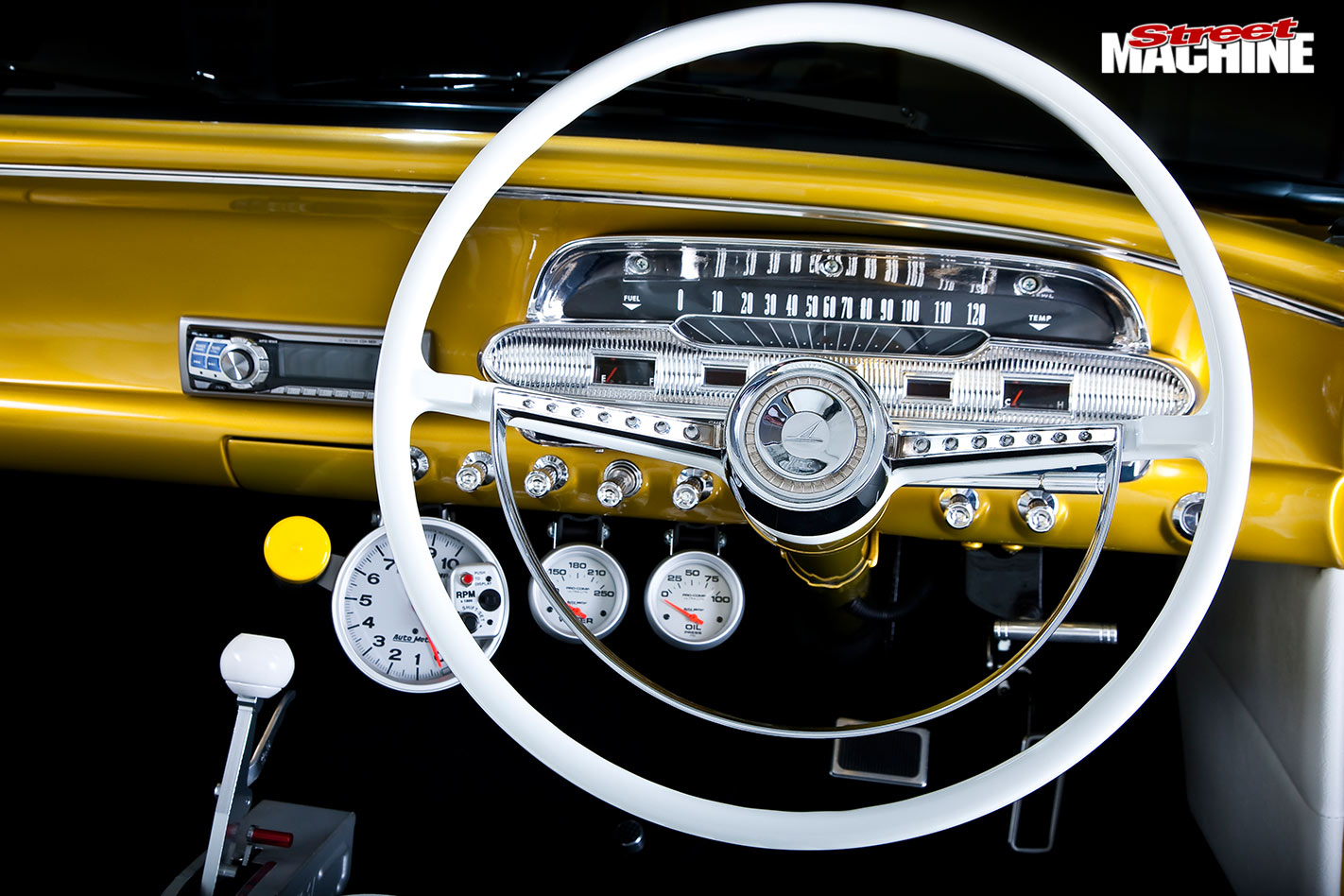 He did all that in the six months after he bought the car but with a bunch of other projects on the go, it had to take a back seat until his sister’s 2008 wedding meant it was time to lift the dust cover.

“She said to me: ‘I want the car in my wedding — you’ve got two weeks to finish it off.’ I thought: ‘Oh Jeez, I better pull my finger out!’” 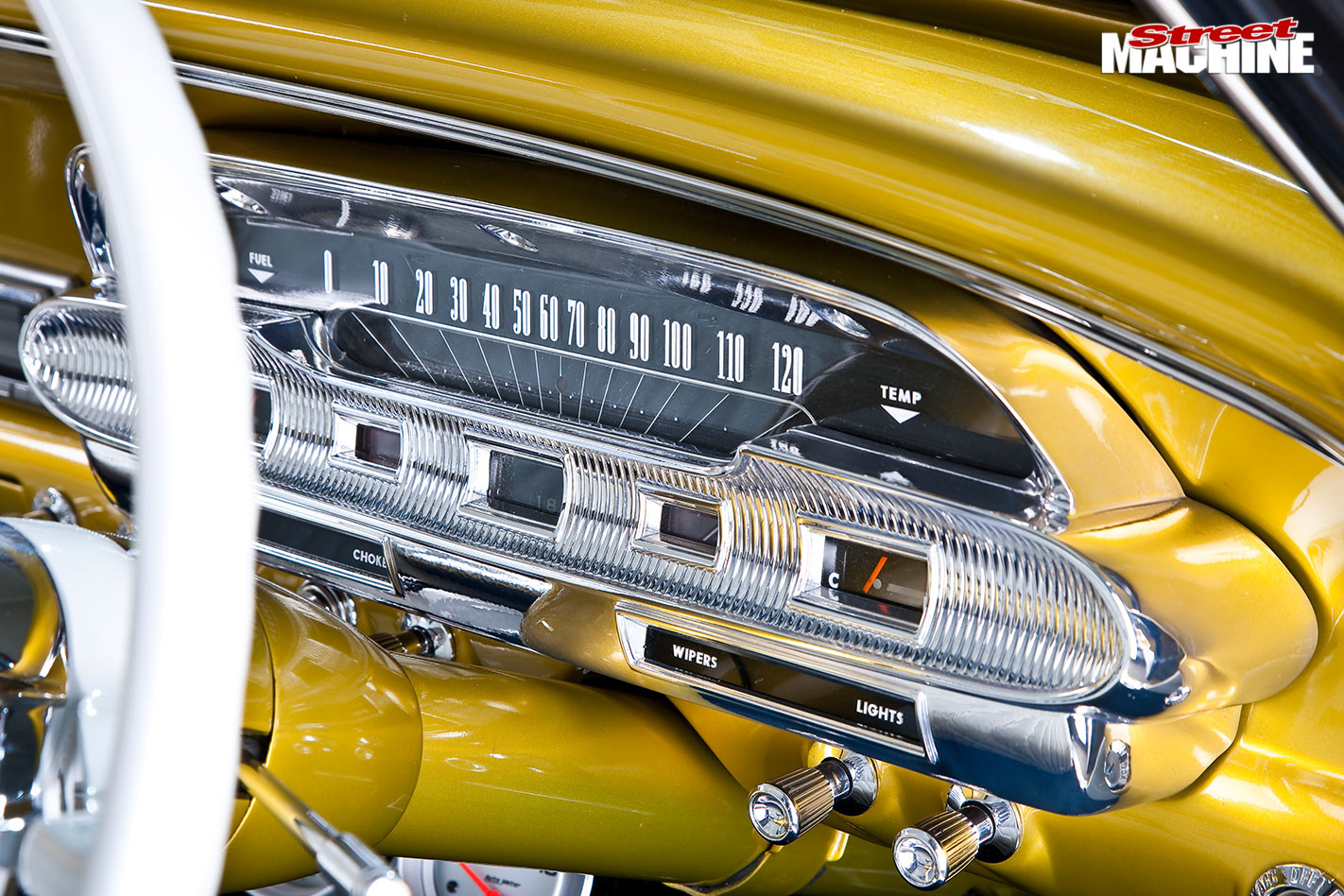 If this were a movie, this’d be the bit where you’d have the montage of Adam and the Cassar family getting the XP over the line.

“It was all there — all I had to do was put the motor, gearbox and all the running gear in the car. I had to have the tailshaft shortened, get the diff finished off and put in, and I had to do all the brake lines.” 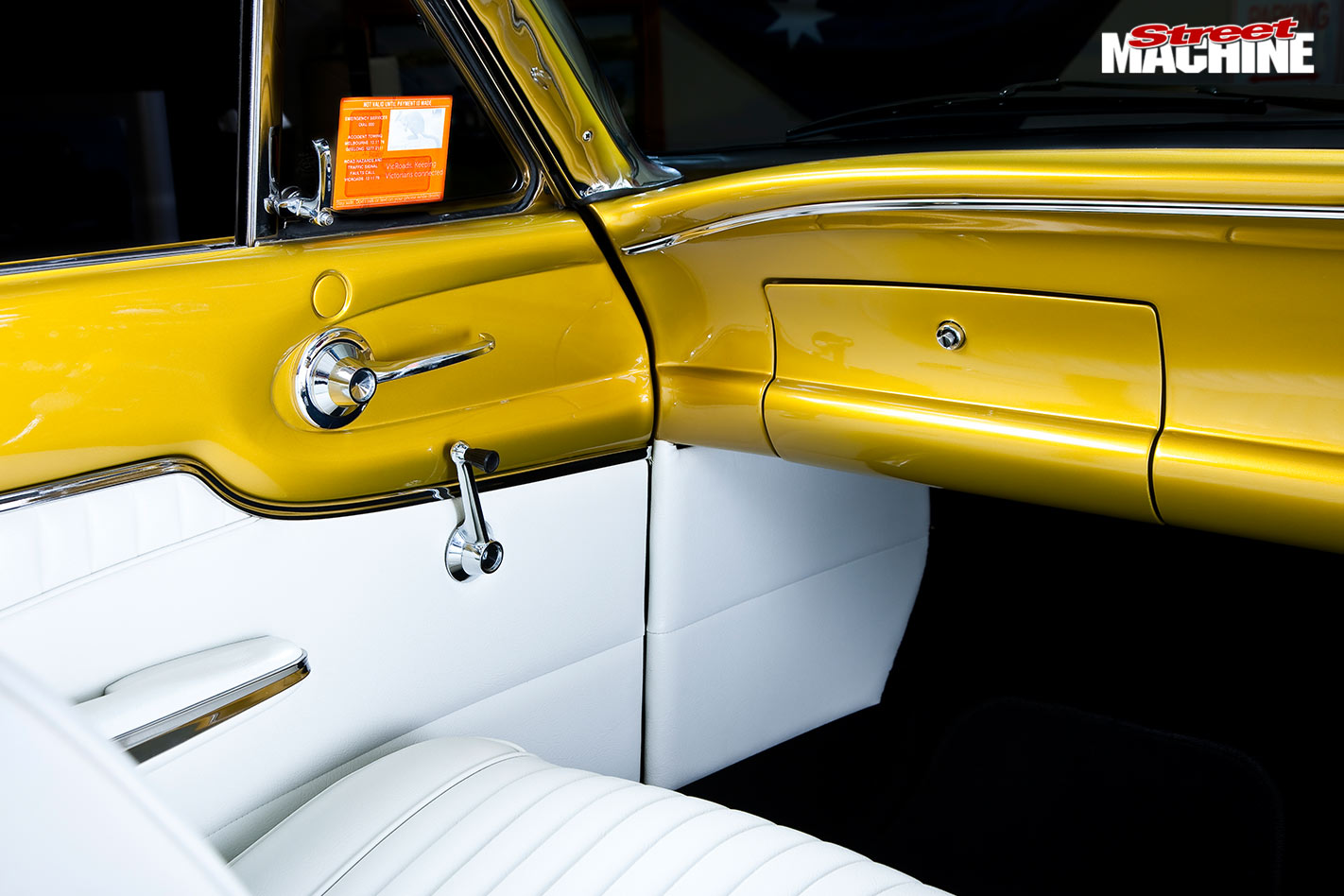 A 302 Windsor was found and his friend Tony at Tec Race Engines went about installing the powerplant, adding an Edelbrock Victor Jr inlet manifold and an 850 double pumper Race Demon carbie. Helping it breathe are Tri-Ys and a three-inch twin exhaust.

“We finished it the night before and ran it in on her wedding day,” Adam says. “My first drive was the wedding.” 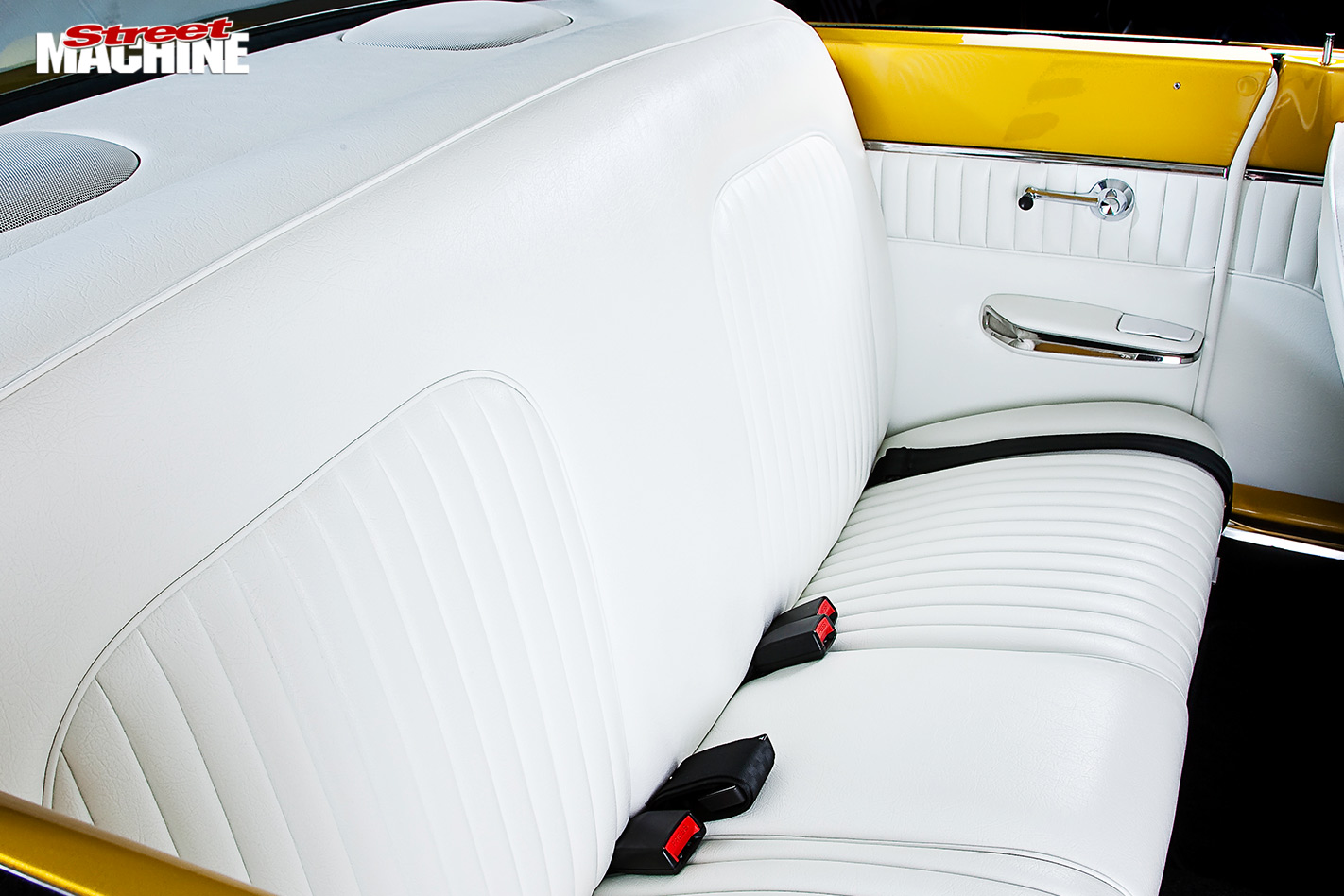 That was four years ago. Since then, the XP’s been getting plenty of exercise, heading to runs and bringing home trophies. Now Adam’s keen to get another car built.

“Next is a 1940 Ford. It’s all here — half-done, customised already. I just need the time to work on it. I’m working on everybody else’s stuff, you see.” 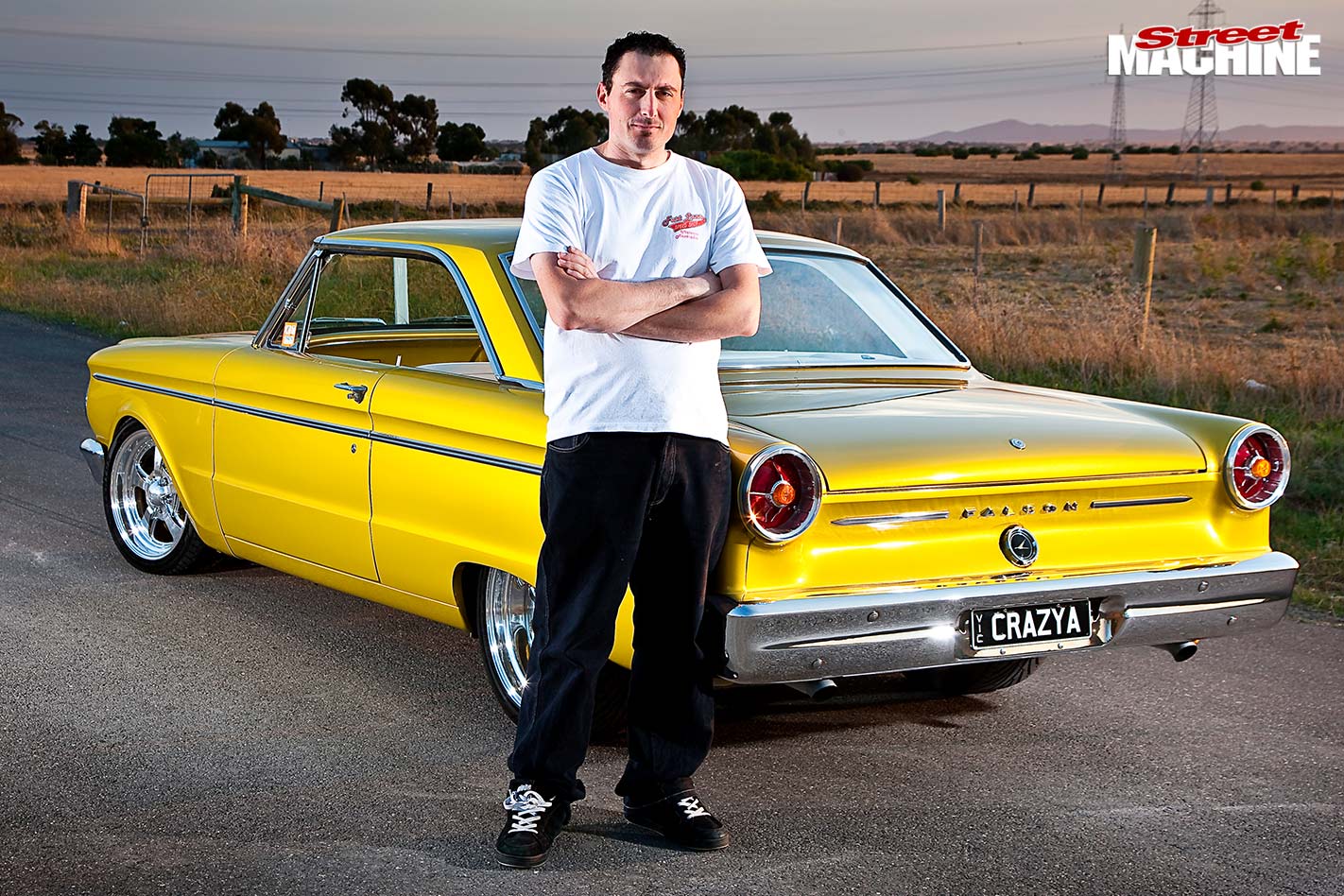 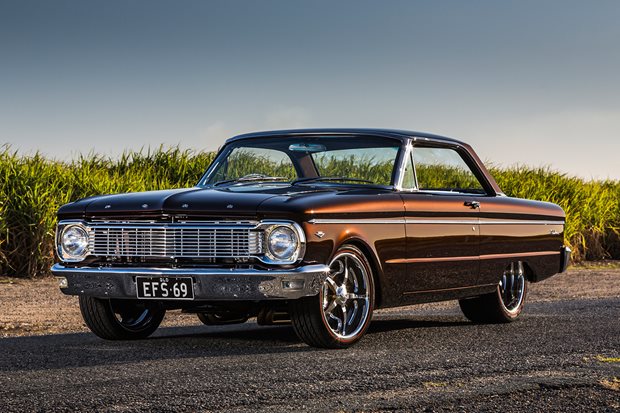 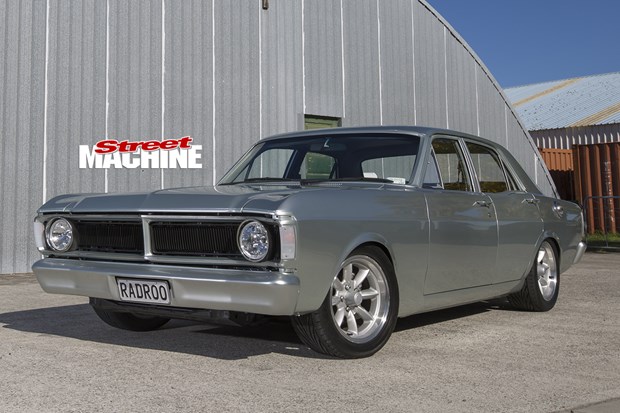 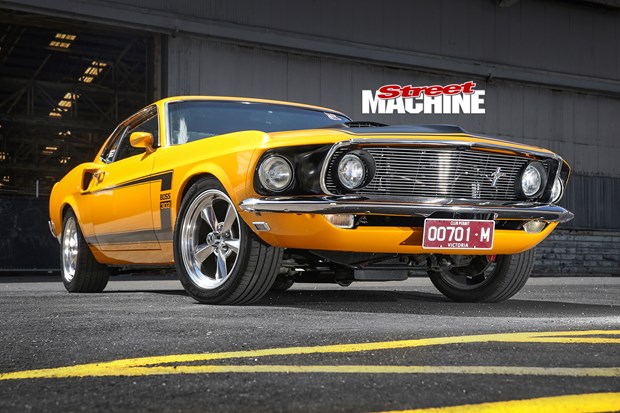