UPGRADING the running gear in your old girl with later-model bits is as old as street machining, but it wasn’t until the 1990s that it blossomed into the retrotech movement. The idea was simple enough – upgrade the car’s powertrain, brakes, suspension and passenger amenities to modern standards – but the engineering needed to pull it off was often significant. We used to joke that it would be easier to just put an old body on a modern car. Well, 20 years later, Kiwi Andy Etchells has done exactly that. 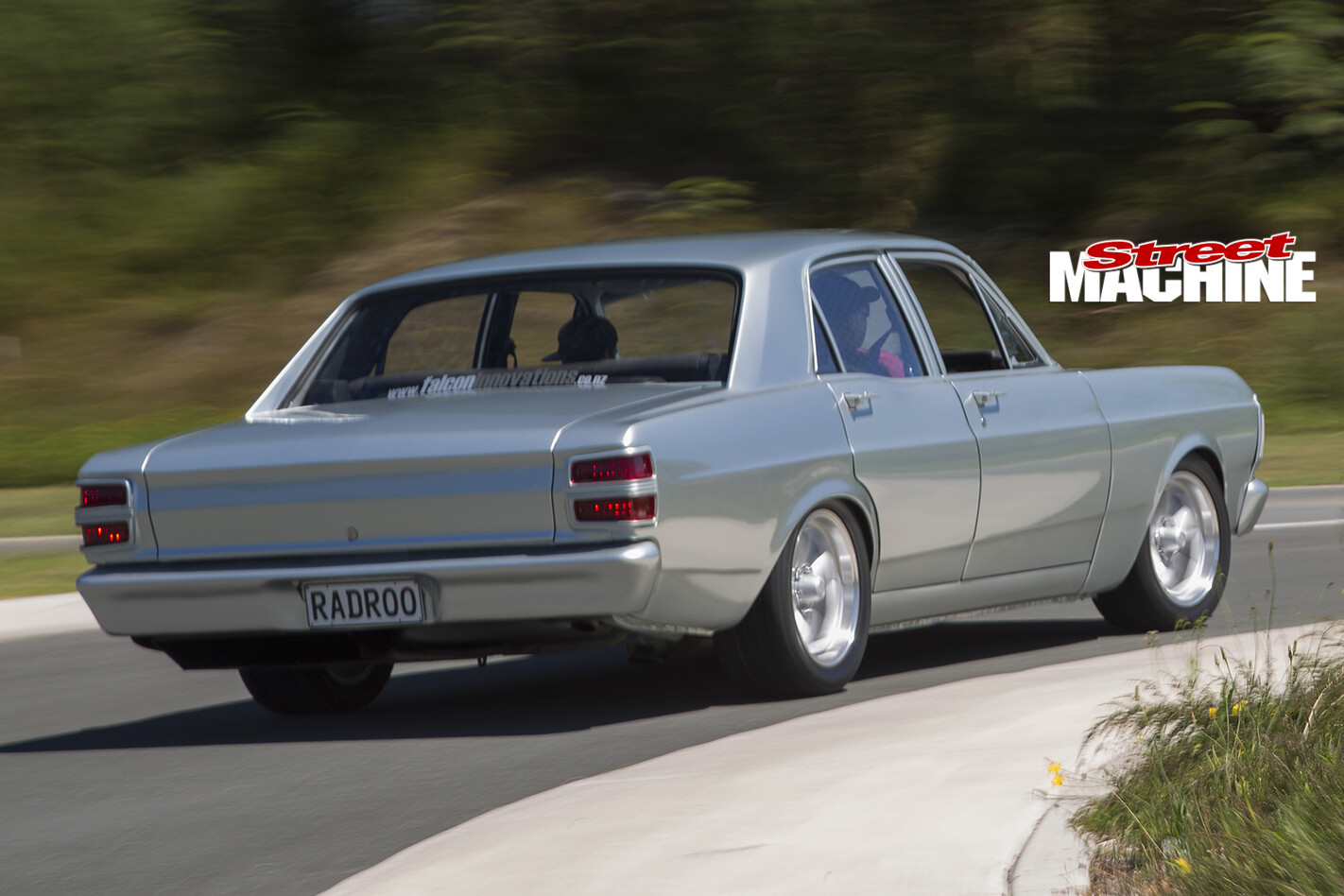 “We had an XY that needed a bit of work and we also had an EL Falcon race car in the workshop,” Andy says. “So we measured the two up and thought, we can do this.”

Andy runs a business called Falcon Innovations in Tauranga. The XY was “buggered”, he says, so there were no qualms about cutting it up. He sourced from Auckland a pristine EF sedan – which predated the EL but is the same under the skin – and pulled out the grinders. “A lot of the donor car was going to be used, so the minter it was the better the XY would end up,” he says. “We began by cutting out the chassis/floorpan from the XY and cutting the body off the EF. We did some trial fitments with the forklift and could see it was going to work.

“The next step was to find out if we could get it certified to drive here in New Zealand under the low-volume vehicle-building regulations. We filled out the design approval application with 20 pages of paperwork and photos and the wait began. A few weeks later the answer was out – accepted!” 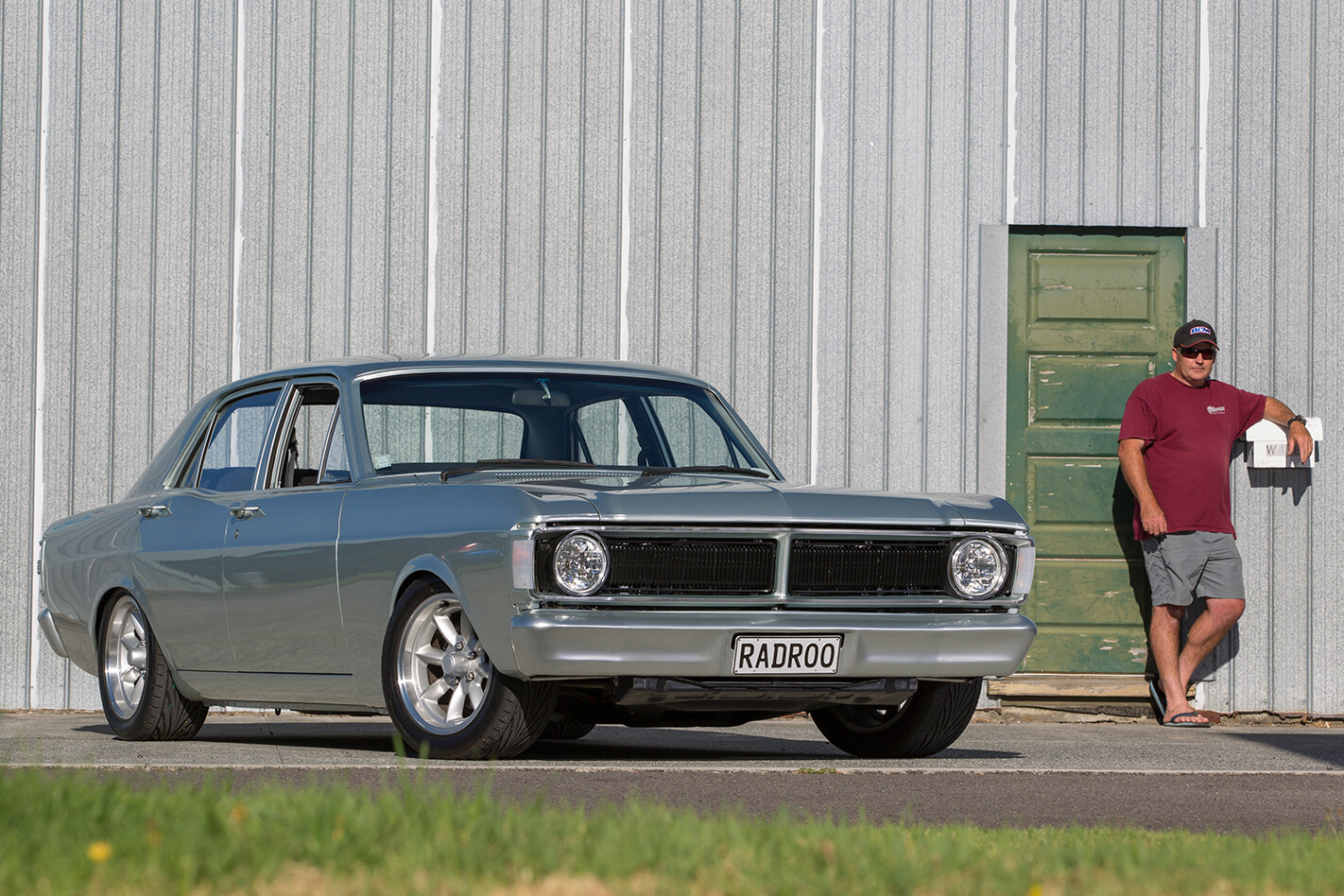 But there was still one other issue to be addressed.

“The EF we bought was a six-cylinder so we needed something better, but we had boxes that had to be ticked,” Andy says. “I wanted a reliable, no-nonsense engine with good fuel economy; something the family can drive, not overheat in an hour of traffic, start first time. “By chance, a guy came into the shop wanting some Pacemaker headers for his Cleveland. He mentioned he had an XR8 Sprint engine and five-speed, which he had stripped out after crashing it. New Zealand only had 52 XR8 Sprints and only a handful were manuals. It was the poor man’s GT, same engine. We went around to his house that night and yes, everything was there. Computer, wiring, gearbox, driveshaft, LSD. It was just what the doctor ordered.” 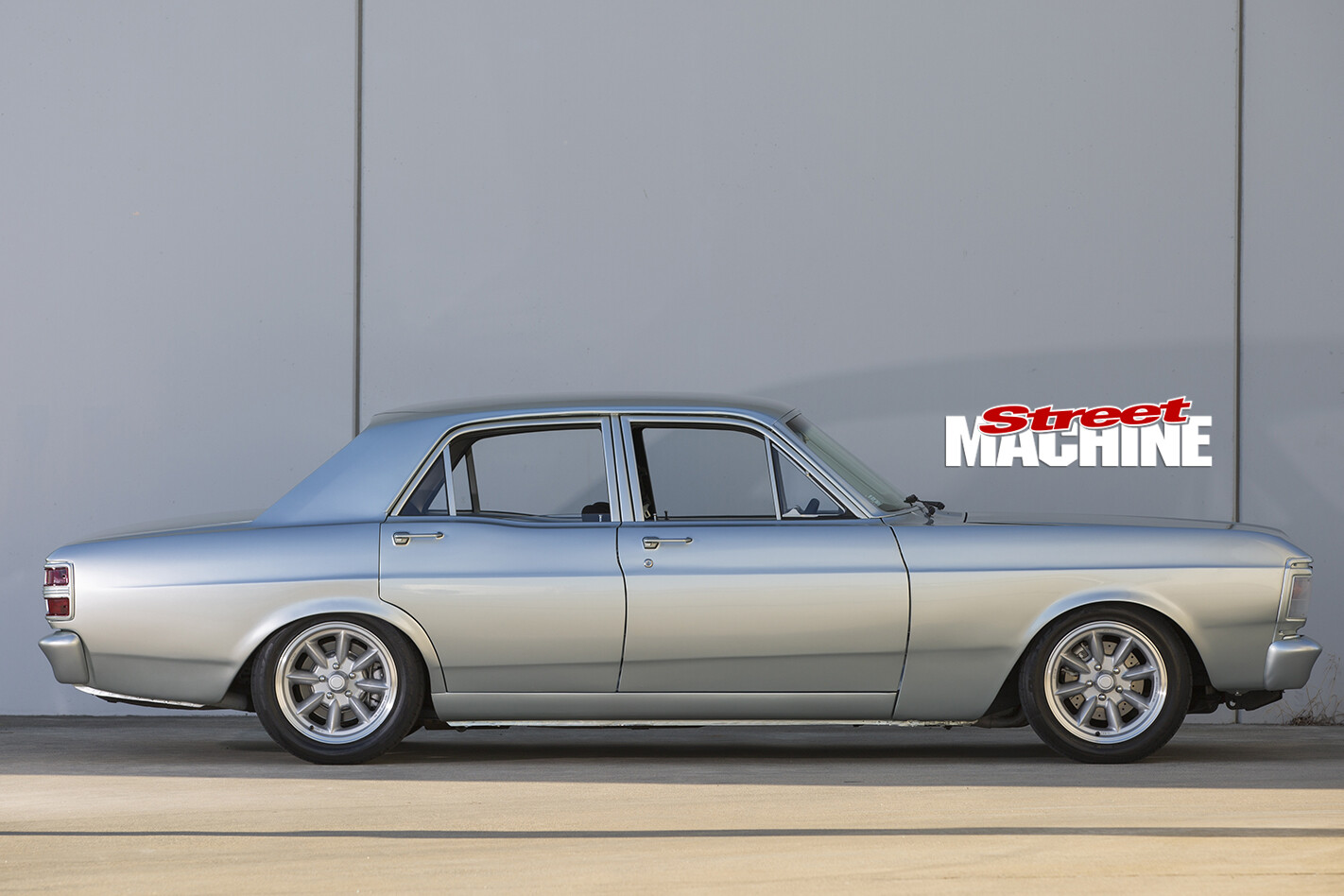 XY and EF Falcons have remarkably similar dimensions given there’s a 25-year age gap between them. The XY has a wheelbase of 111 inches (2819mm) and the EF 110 inches (2792mm). Front and rear track are also close at 58.9/58.5in for the XY and 61.7/60.8in for the EF, easily compensated with wheel offsets. Yet the EF steers, handles and stops light-years better than an XY ever will, so it all made a lot of sense, even if turning the idea into reality was daunting. As always, the devil was in the detail. While the dimensions of the two cars are similar, they are not identical. “There were lots of problems mating the two together,” Andy says. “The build photos don’t show all the misalignment issues we had to deal with, but the end result was worth it.” Mating the two firewalls together led to a mismatch between the EL’s inner rear wheel well and the XY’s external wheelarch, for example. The XY’s A, B and C pillars are wider than on the EL, which also has a longer boot section. A good grasp of geometry, engineering and lateral thinking, however, eventually saw them achieve their mission improbable, after which Andy turned his attention to the interior. 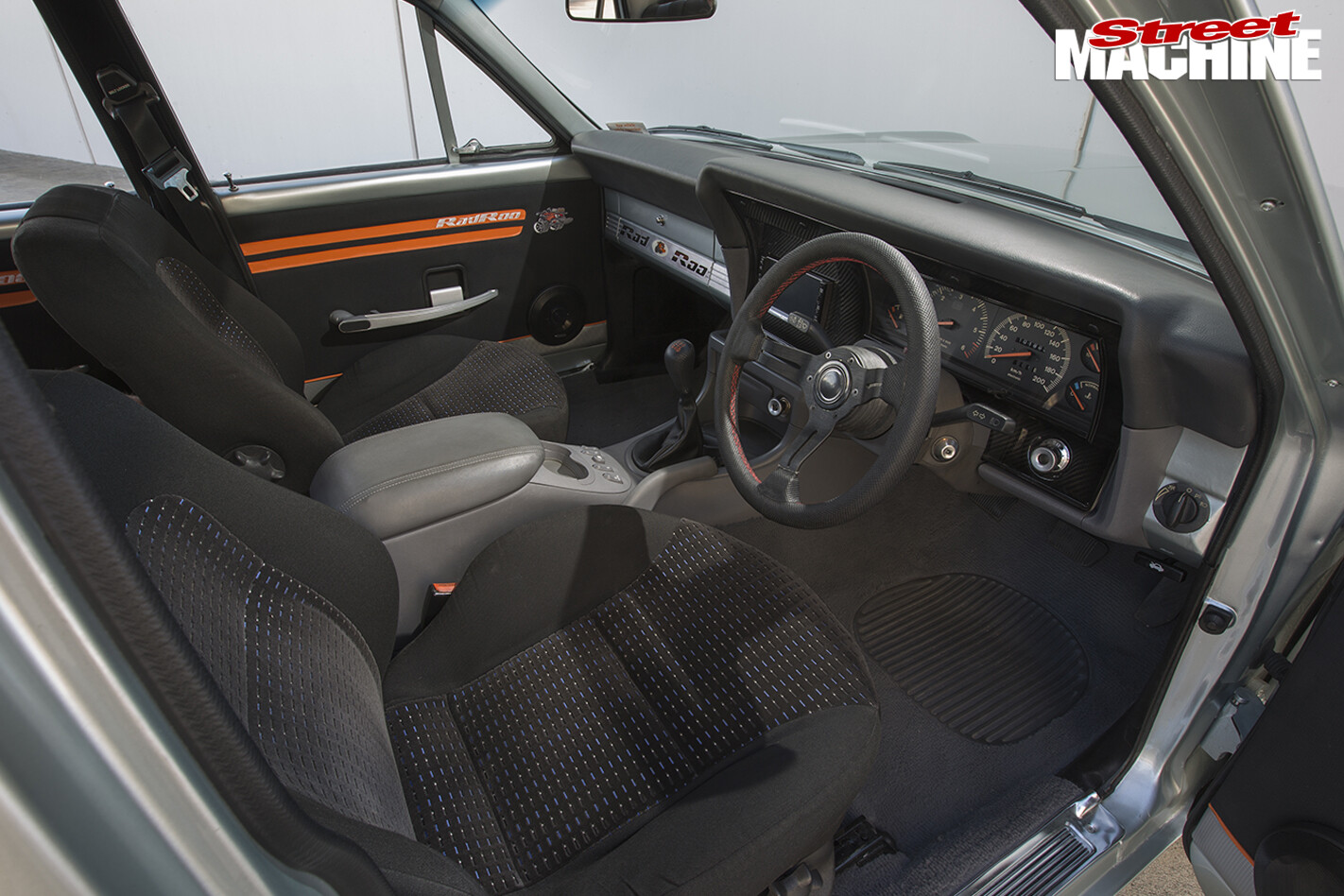 “We didn’t want the late-model dash but we did want to use the electronic XR8 speedo cluster, so we kept the XY dash and mounted the cluster in it with a carbon-fibre surround to finish it off.” The EF steering column is adjustable and comes complete with wiper and indicator stalks as well as the ignition, which left a big hole in the XY dash where the switch once lived. “This was nicely filled by the EF’s round headlight switch, like it was made for it! We then mounted the electric window switches in the centre console, which needed some finishing where it met the dash, so we fabricated and moulded a piece to blend it all in. “The XY was never going to be a GT Super Roo so we named it RadRoo (Radical Roo) instead and designed the door trims accordingly, got the embroidery done and Regal Auto Trim put it all together. Without the winders it was all starting to look clean and I didn’t want to refit the big, bulky XY armrests. I looked at everything and finally saw a curved Stanley hacksaw in the tool department of my local hardware store. I took one home and thought, yeah, this is going to work.” 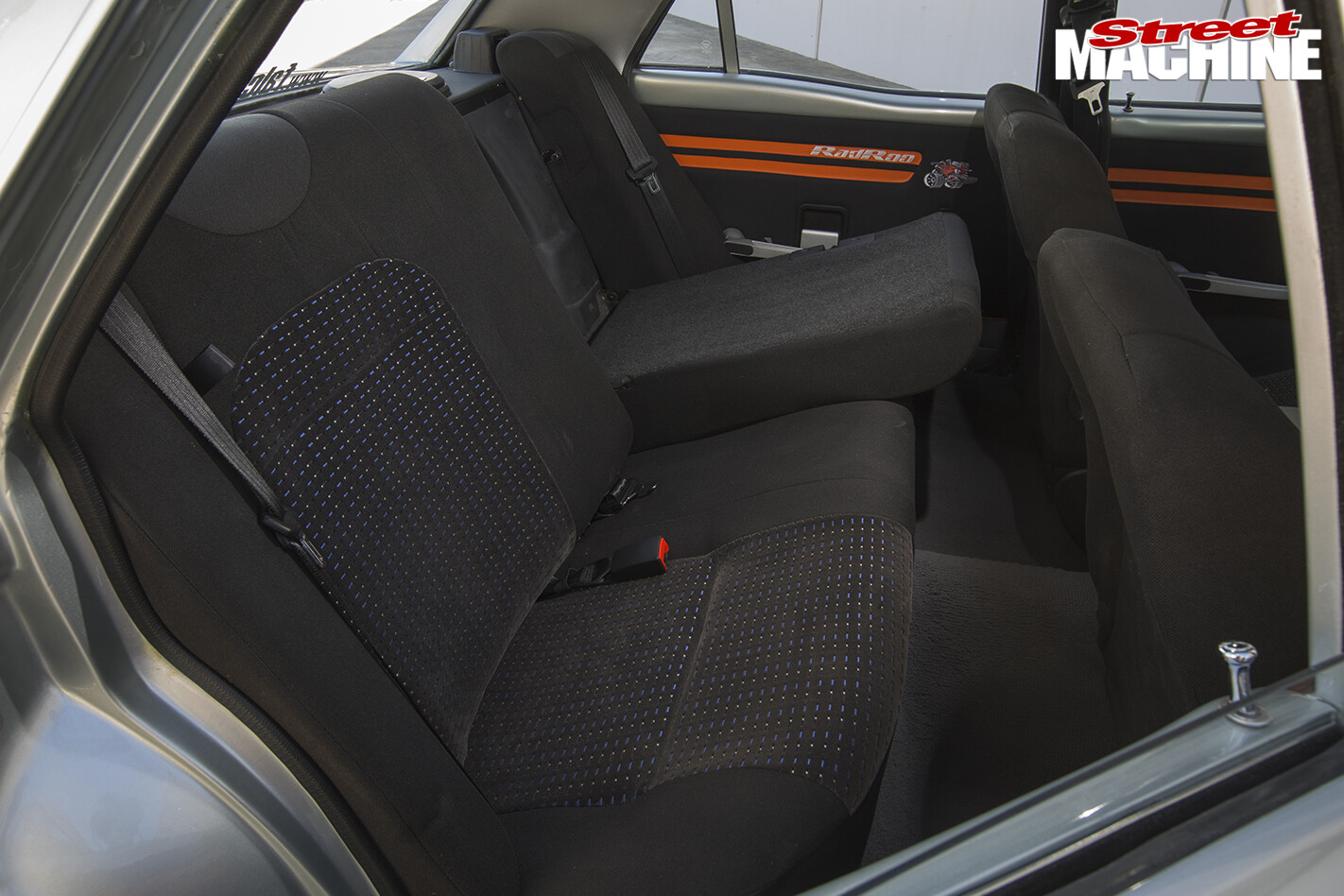 Bucket seats are factory EF, as are the fold-down rear bench, carpet, retractable seat belts and courtesy, map and interior lights. A Panasonic head unit and Soundstream speakers provide the tunes. Steering wheel is a cool Nardi Torino, shifter is XR8 and the pedal set is from the EF. The exterior panel work was restored and de-badged, and the bumpers shortened to better hug the body, with all work done in-house. Paint is a Mazda colour, Dupont Silver Contrail, expertly applied by Craig Cameron, who also colour-coded the bumpers and all the stainless-steel brightwork around the windscreen and window channels. “I was trying to get away from that old picture-framed windscreen look that XYs have,” Andy says. 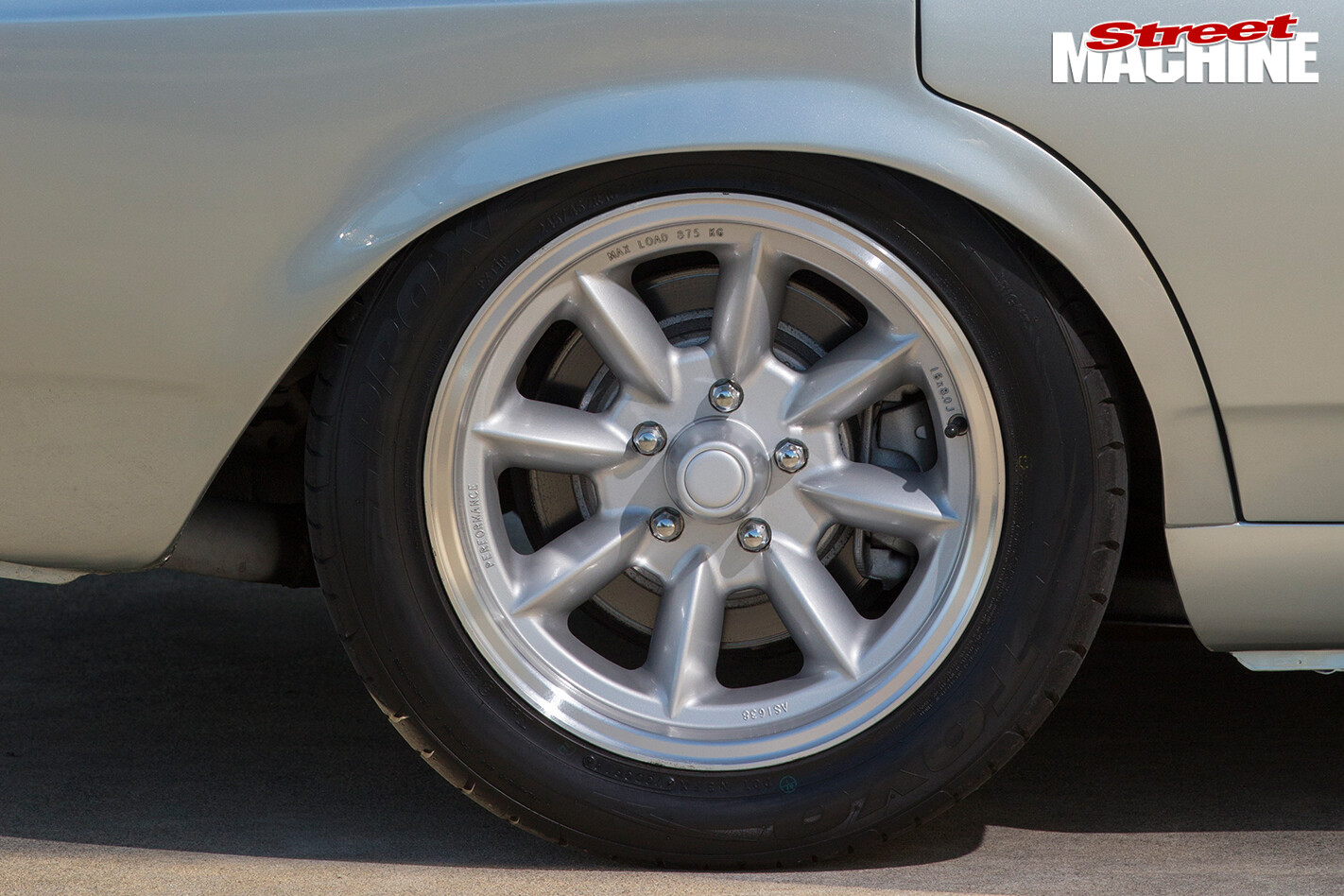 With so few adornments, wheel choice was critical. “Having a cool low stance was important and we wanted good suspension travel, so that cut out any thought of 20in wheels. The 16in Superlites got the tick as they are a cool wheel of the era.”

So how does it go? “It’s not a high-horsepower car as I have had in the past,” Andy says, although it’s still good for around 250kW or 335hp. “It has excellent fuel economy. Comfort and handling are the best I’ve ever had and I’ve owned a number of XWs and XYs over the years. My wife wondered what I was on to start with, like a lot of people, but she loves it now; it’s so easy to drive. “We did have a few critics who wondered if it would be worth all that work. They have all since seen it and driven it and can’t believe an XY can handle and drive like this one. We have a number of people interested in buying one, so it looks like we might build one or two a year to go along with our other stuff. The options are limited only by the donor car. If it has cruise control, the XY will have cruise control. If it has ABS, the XY also gets ABS. “A BA-series Falcon could be done but the problem is the width of the wheelbase. The offset of the wheels changed with very little dish, which doesn’t give you the old-school look you want.”

All in all, RadRoo is a remarkable car. Whoever said you can’t have your cake and eat it too sure wasn’t a Kiwi.