I TURNED into the street and I just fell in love,” says Carey McMahon. “You know what houses are like in America? They all look the same with nice gardens and all that and here, in front of one, is this sensational-looking Corvette. Just magnificent.

“So I took it for a drive: it was just horrible; horrible steering, horrible brakes; no redeeming features at all. I had to walk away. It was one of the few times in my life when I didn’t know what to think or do. I honestly didn’t know what to say to the guy selling it, but I just couldn’t buy it.” Carey’s interest in America’s home-grown sports-car history grew after he bought a 2001 Corvette while working in the US.

“I’d bought a new Corvette over a Mustang as Mustangs aren’t much more than hire cars over there,” he says. “It introduced me to the early models. What an incredible car! How gutsy of GM to build such a car in the 1950s, especially from fibreglass. I thought I’d buy one and take it home. But after driving one, I knew I couldn’t live with it.”

But his disappointment with the ’58 quickly faded. “I went away and hatched a plan,” Carey said. “I decided to build a car with classic looks that drove like a new one.”

2
The transplanted LS1 looks so perfect it could have grown there. The finish is...polished

Although Carey had a better-than-basic background in car restoration and modification, having played with Bathurst Toranas, a string of British sports cars and Minis, and a Mustang, his knowledge of retrotech engineering was limited – but not for long.

“I got on the net and started researching,” Carey said. “One of the first sites I found was Rich Lagasse, a US-based bloke who builds what he calls pro-classic Corvettes with current-model running gear, just for himself. He also writes about the conversions, so I sent him an email. We ended up in regular contact, with him giving me a lot of ideas and experience with how to do things.”

In the meantime, Carey was also keen to track down a Mustang to take home to Australia. “To cut a long story short, I bought a Mustang and mentioned to the bloke selling it that I wanted to take home an early Corvette as well. Just by chance, he said his neighbour had a ’58 sitting in his barn. It was in pieces and not for sale at that stage.

“But the owner must’ve taken a long, hard look at himself because four or five months later he rang me and said: ‘Goddamn, this thing has been sitting here forever. I’ve got too much on ever to restore this – come and get it.’”

The Corvette’s front panels were missing but it came with a stack of new parts such as bumpers and side trims. “They were brand new – NOS, not repro,” says Carey. “There are only about 10 items on a Corvette you can’t buy new, such as the windscreen pillars. They’re a solid ‘pot metal’ casting. You can buy just about everything else. But it was nice to get original stuff with the car.” After discussion with Rich Lagasse, Carey commissioned a Californian workshop, Paul Newman’s Car Creations, to perform the retrotech upgrade for the Corvette’s chassis. Carey stripped and shipped the chassis from his home in Colorado to California.

“It was there for four months,” says Carey. “The work this bloke does is ‘factory’ – reshaping the chassis and adding the brackets to take the late-model components. I bought all the front and rear independent suspension from a wrecked 1996 Corvette, the last of the C4s. When the chassis returned, I bolted it all in – simple as that.”

The engine and T56 six-speed gearbox – mounted directly behind the Gen III, rather than in the rear of the Corvette – came from a ’99 Camaro but has since been rebuilt and needs it again! “It was just like a big kit car; everything dropped in and bolted up perfectly,” says Carey. “After that, Gary Steffen’s Corvette City in Colorado pointed me in the right direction for things like radiators, engine management and wiring.”

At this rough mechanical stage, with new front panels tech-screwed into place and the floor hacked to fit over the large six-speed gearbox, the car was shipped to Australia as Carey’s time in the USA drew to a close. It arrived in March 2003 and then the real work began.

Carey booked himself into TAFE for a couple of years, learning TIG welding and machining so he could use the equipment he’d bought for his home workshop to create items such as pulley covers, brake-line brackets and a pair of boobs – yep, over the engine mount bolts. 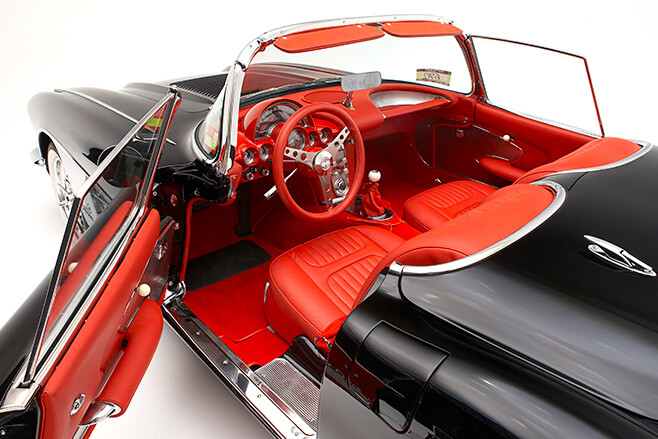 “I was looking at the chassis on the floor one day and I couldn’t help thinking how feminine and curvy it all looked,” Carey says. “But the engine mount bolts clashed so I came up with the idea of a pair of machined breasts, modelled on my wife!”

Much of the major bodywork was performed at Mustangs R Us in Castle Hill, NSW, including the flaring of the rear wheel arches. MRU’s Chad Parrish bogged out the guards 40mm and made moulds. New guards were made from the moulds, then the original guards were carefully sawn off the shell. The final step in the sequence was splicing on the new, wider guards to cover the stretched rear track and 17x9½ wheels. The remainder of the car appears stock but there were dozens of individual changes required underneath to accommodate the late-model driveline, including a new bolt-in floor panel to cover the hole over the six-speed gearbox. When the body was deemed complete, Chad was responsible for the glorious Pro Tech black paint with silver sides. 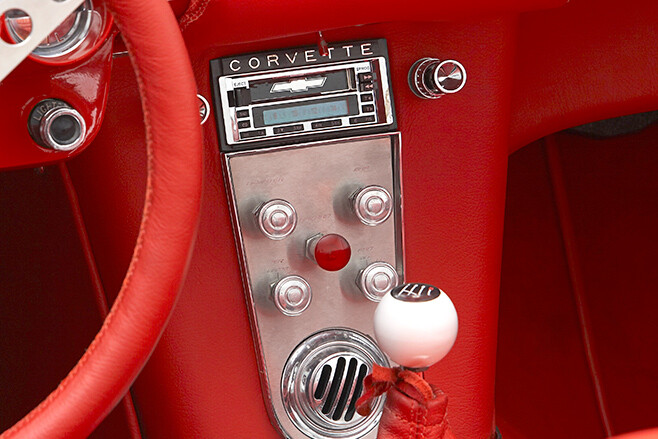 Most of the final assembly work was performed in Carey’s large home workshop. Although the car wasn’t a runner when it was shipped from the US, Carey had researched and bought much of what was required to wire up and fire up: Howell Developments modified PCM and wiring loom; body wiring from Corvette Central; Howe Radiators cooling system; Rock Valley fuel tank and, vitally, Vintage Air a/c. When the time arrived, the transplanted LS1 fired into life with the first turn of the key. The engine’s final tune was performed by Silverwater Automotive Services, who set the PCM to deliver 290 rear-wheel kilowatts.

The leather trim over the original seats is the work of McKenzie’s Motor Trimming in Guildford, NSW. George Athans at Mirror Finish was commissioned to polish the bejeezus out of the alloy driveline and suspension components and Carey is grateful to Andy’s Restorations for assistance with completion and registration. 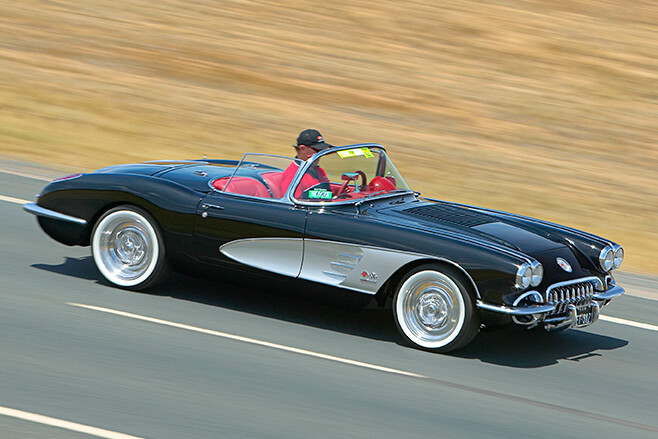 “I reckon I spent a couple of thousand hours building and assembling this car but I spent at least that again on the net, researching in books and magazines,” Carey concludes. “I don’t drink, smoke or gamble. I work in an intellectual environment all day and this is a real release for me. It takes my mind off work.”