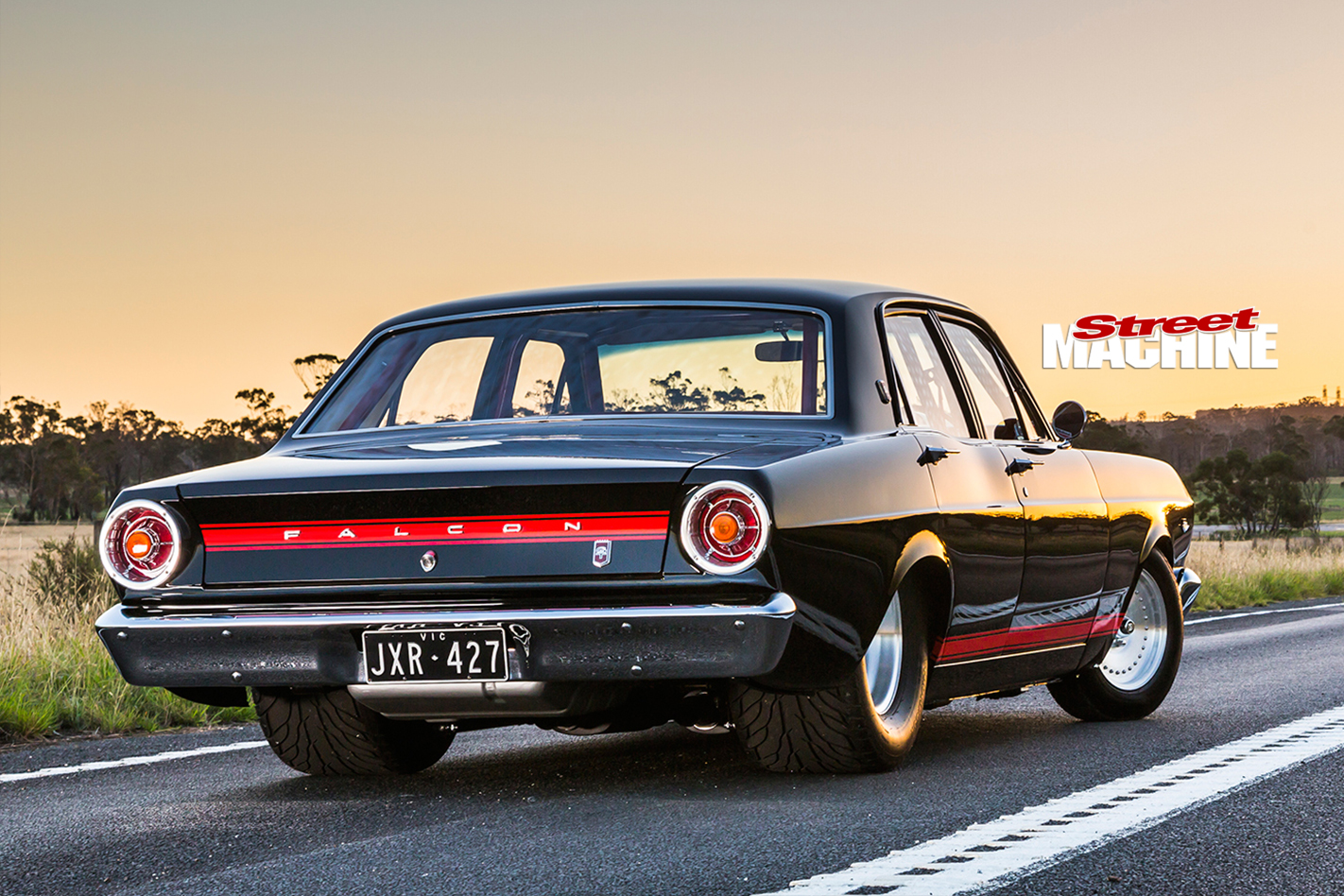 Rhys openly admits that as a young lad he wanted to follow in his father’s tyre-frying footsteps. Being the supportive type, Christou Sr was only too happy to both encourage and facilitate.

“At age 14, me and Dad went out and got me an XA K-code coupe,” Rhys says. It was earmarked as a skid pig, but Rhys ended up selling the hardtop just 12 months into the build. 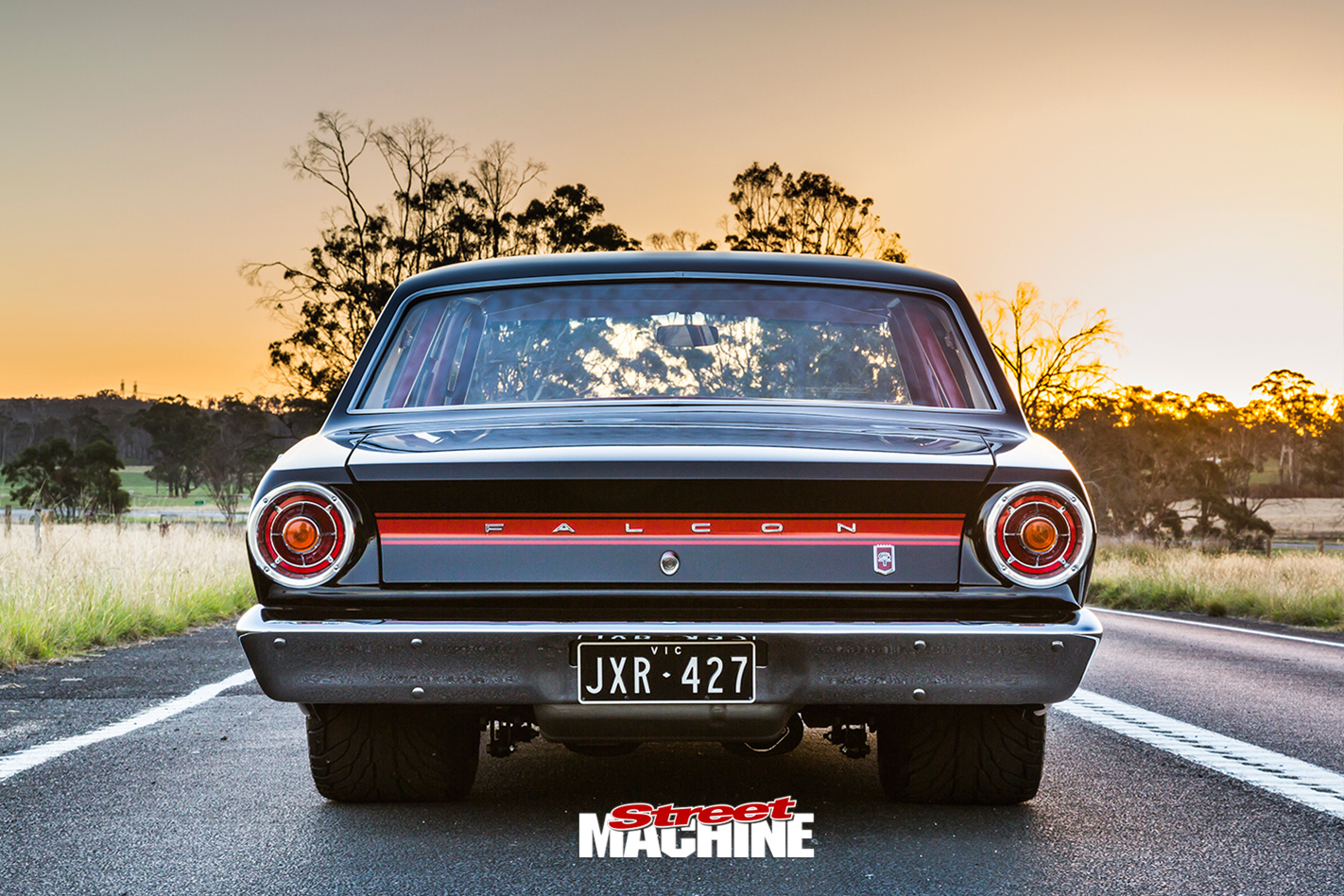 “I’ve always had a soft spot for XRs,” he explains, “so when this one came up, I jumped at it.”

The XR was also destined for the burnout pad, so Rhys set about building it to suit. But while his intentions were pure, he never imagined the build would drag on for 11 long years! “I’ve had about 20 cars in between,” he admits. “I was young and got sidetracked easily – cars came and went.” 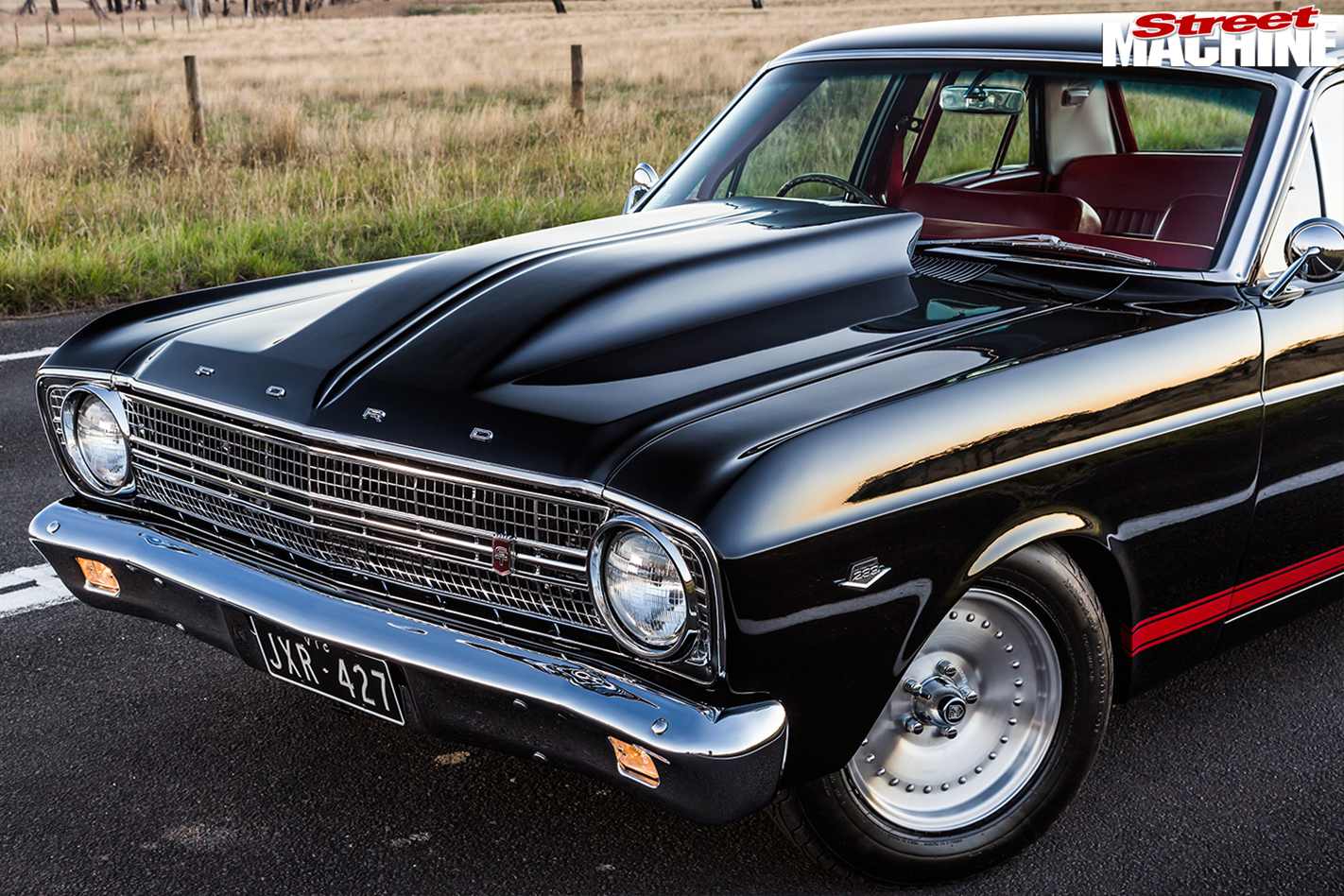 Mind-changing proved to be a strong theme of the XR’s build. As a young apprentice, Rhys added a set of modest tubs, but then he got excited and chopped those for a bigger set. Some years later he was no longer happy with the quality of some of his earlier tin work. So out it all came to be redone – again. Third time lucky, eh?

Rhys began by relocating the rear leaf springs, adding a pair of CalTracs to help keep them under control as well as a massive three-inch hollow sway-bar. “It’s the same set-up the Pro Stock tube-frame cars run,” he explains. Morwell-based company Romlik was a ton of help when it came to bits like this, supplying sheet metal work and numerous laser-cut pieces. 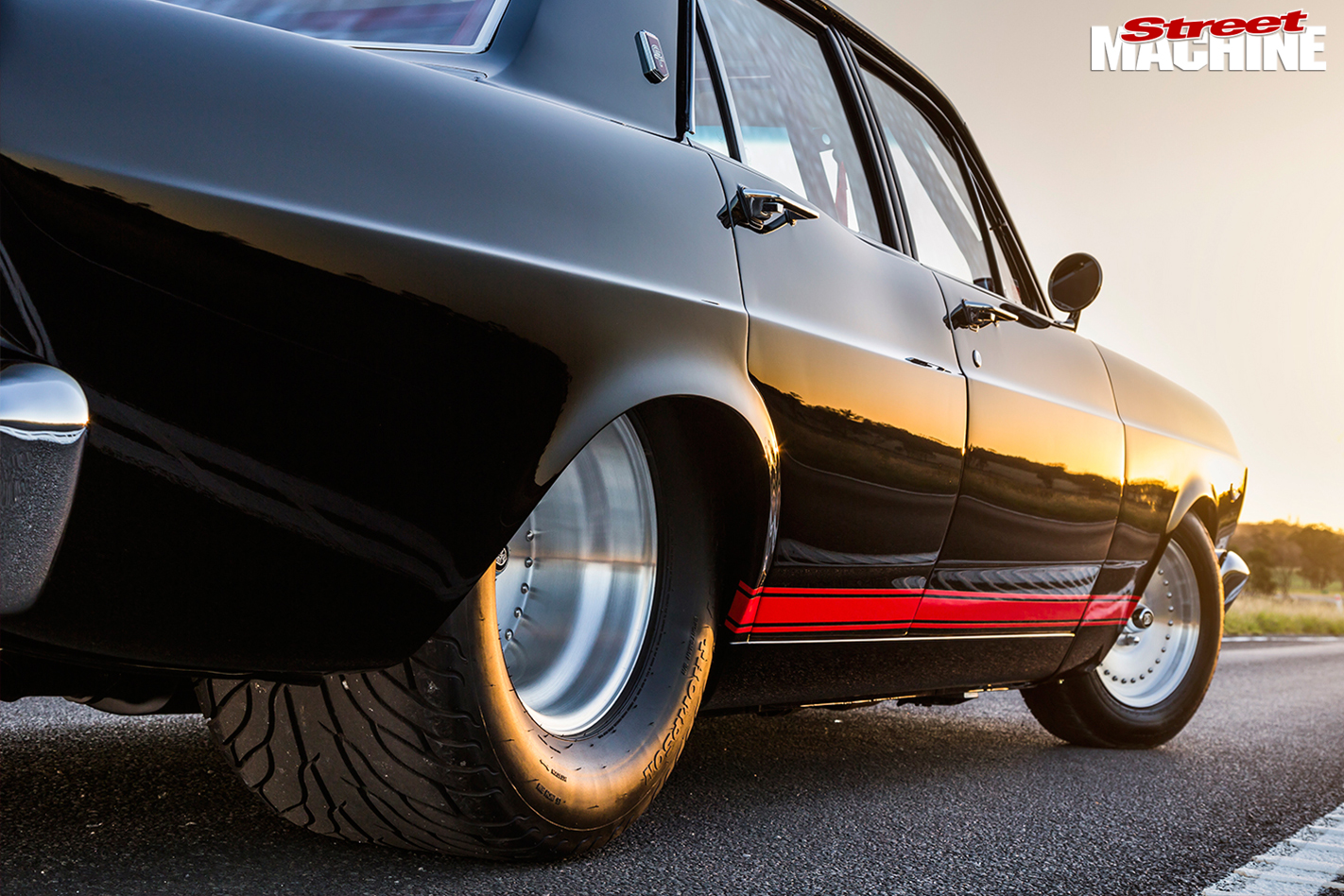 With the chassis mods finalised, the Falcon went onto a rotisserie for a bit of bodywork. Chris and Rhys replaced both sills, before addressing a few more rust issues. Blast Away in Moe then sandblasted the whole underside back to bare metal, so the lads could lay on etch primer and finish it properly. Stick your head underneath and you can immediately see it’s as good as the top.

While under there, you’d also notice the weapons-grade driveline: full-manual Powerglide with transbrake and JW bellhousing; Strange 3.5-inch chrome-moly tailshaft; full-floater Strange nine-inch. Rhys welded up this last item himself, before filling it with a Pro Iron centre and 35-spline axles. 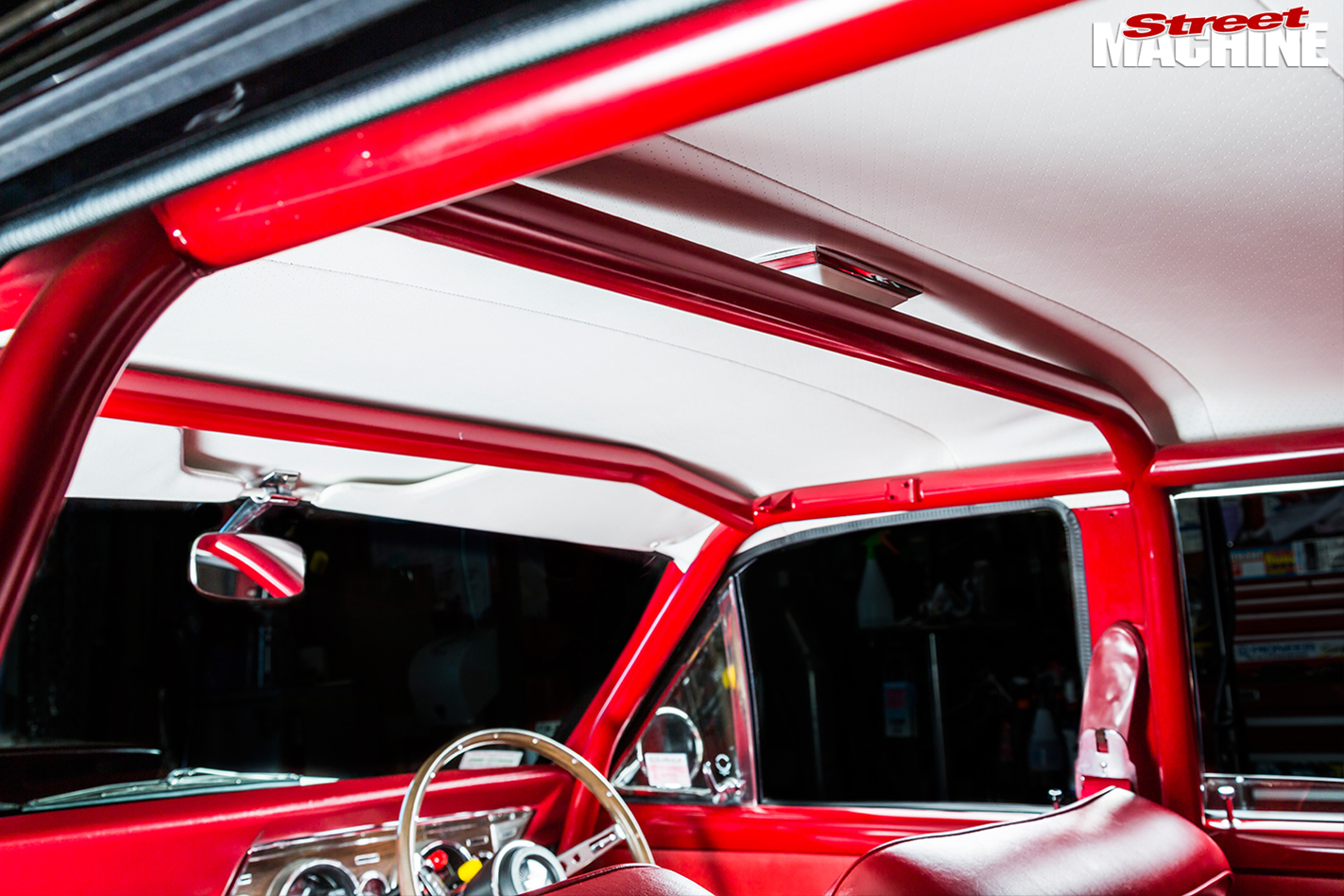 Christou Sr was charged with the task of laying on the final paint, but I bet you can’t guess what happened before he did. Yep, Rhys had a change of heart about the colour. “It was going to be silver with an orange stripe,” he says. “But after going to a few shows and getting serious about the XR, I decided there were too many silver ones. I changed my mind to Glasurit straight black.”

And wow, what a change. Whoever coined the phrase ‘black is beautiful’ obviously had this mouth-watering Falcon in mind – when you see it in the metal the paint is absolutely stunning. The Summernats 29 judges definitely thought so, awarding the car Overall Winner in the Shannons Show ’n’ Shine. Not bad for its very first outing, and it was certainly one of the most talked-about and photographed cars at the event. 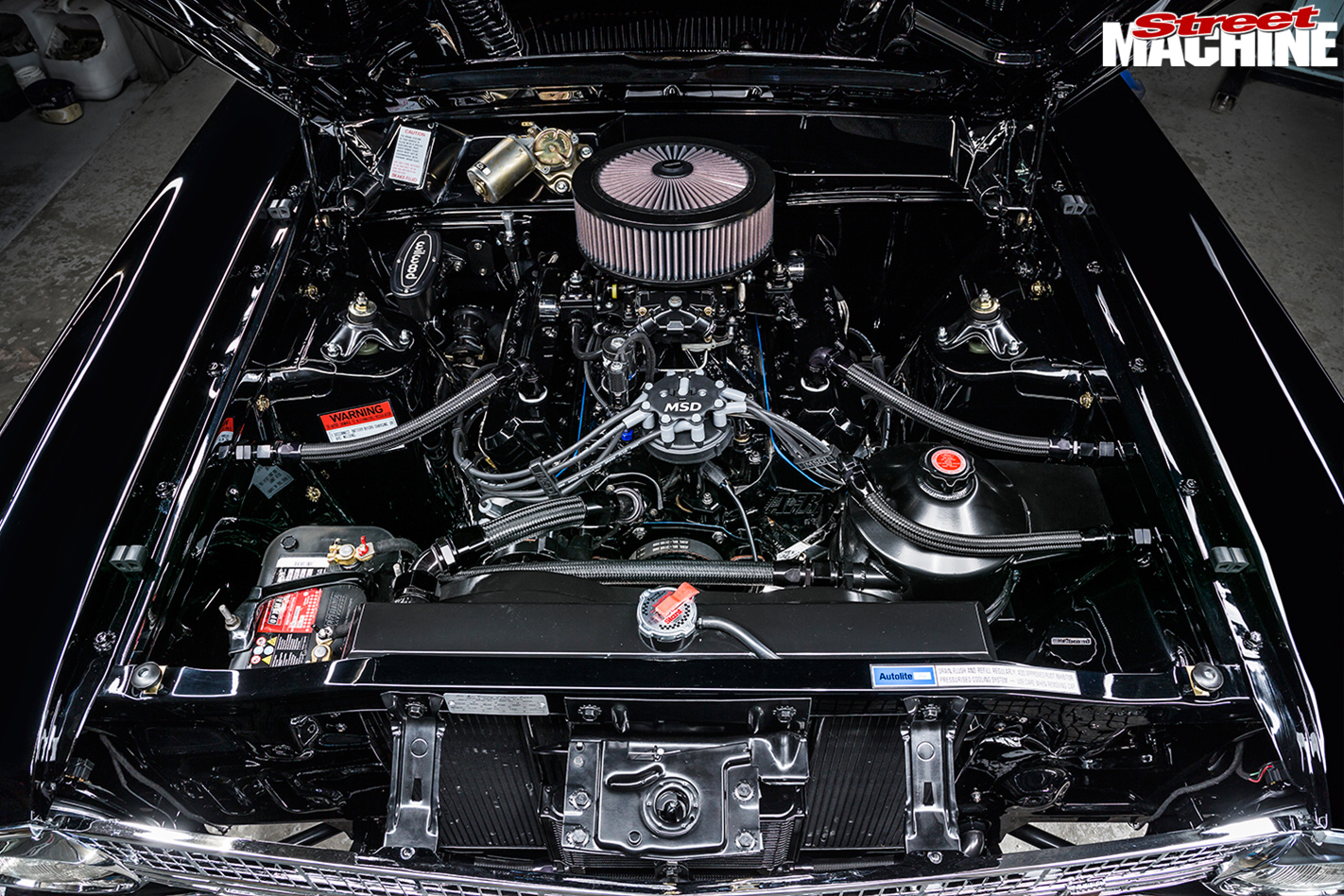 That glorious black extends into the engine bay, where you’ll find a 427-cube Windsor donk also dressed in black – it’s so dark and deep under the bonnet that onlookers have to be careful not to fall in.

A tough Cleveland was the early powerplant of choice, but that idea soon went out the window. “I bought a new World Products 9.2 block and alloy heads,” Rhys says. “I like the idea of the Windsor better; it’s what originally came in the XR.” 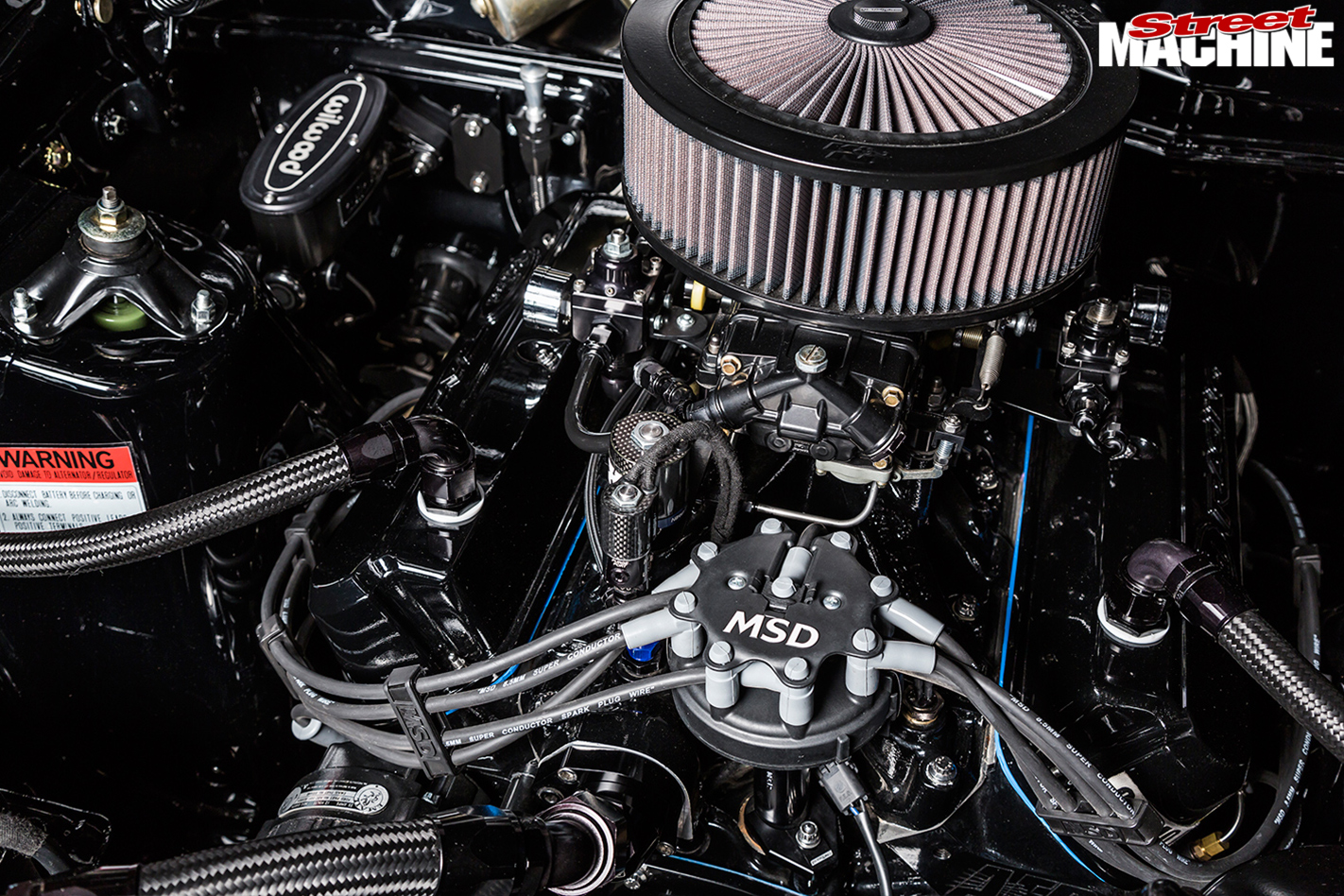 In keeping with Rhys’s original plans to skid the Falcon, the stroked small-block is plenty tough. A Scat crank and rods and Ross pistons combine to pump up the cubes. Theo from High Energy gave the AFR heads a bit of a tickle-up as well, to take full advantage of the SV1 Pro Systems carb, Victor Jr intake and Comp solid-roller cam.

Having built the engine himself (which included TIG-welding the two-inch into 21/8-inch headers, which were a bugger to get around the steering box), Rhys was somewhat nervous on first fire-up. However when they pulled the string and the dyno needle swung around to 650hp and 550ft-lb, it was ear-to-ear grins all ’round. 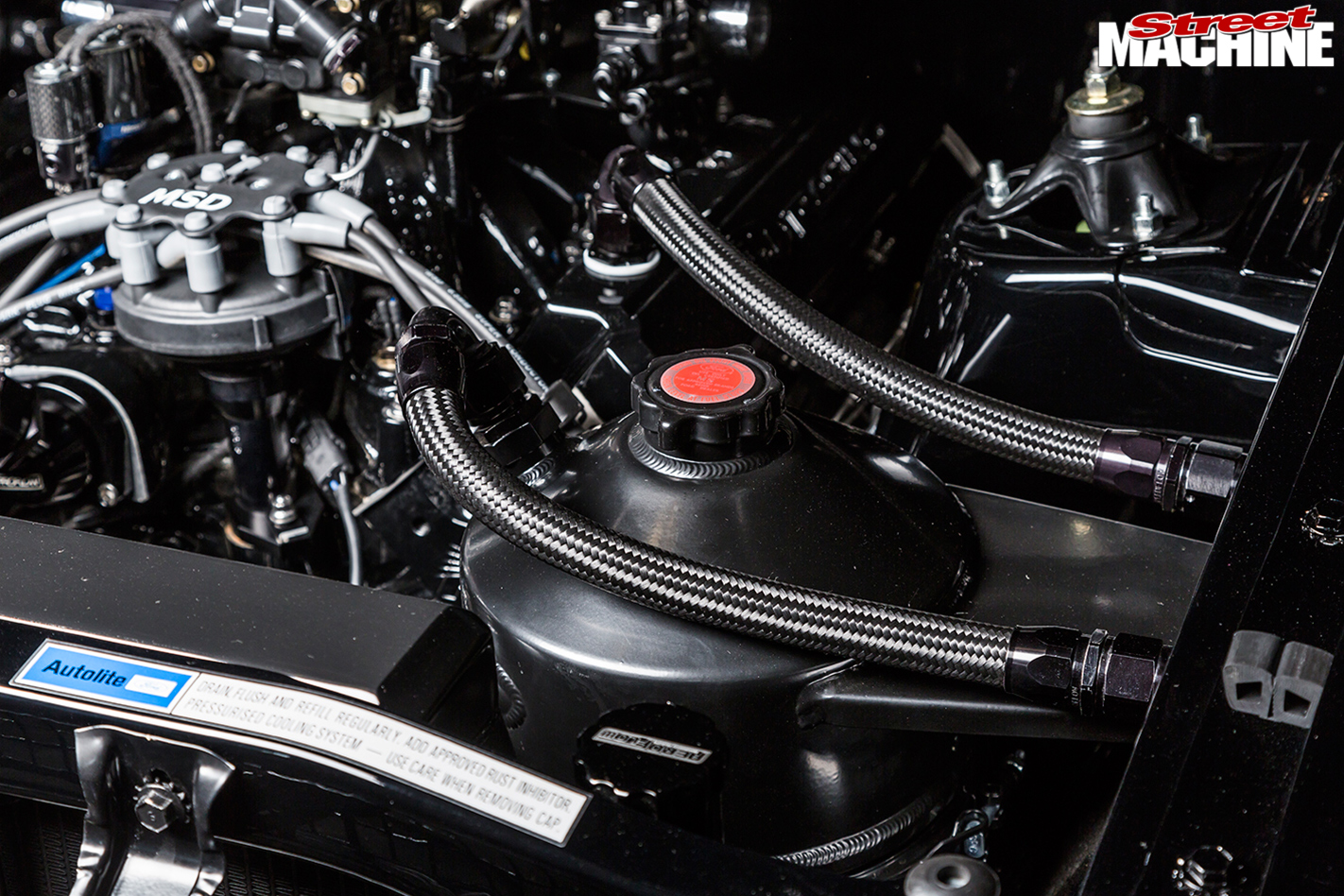 That’s plenty of ponies to generate great plumes of acrid tyre smoke, but for an extra kick, Rhys can always crack the tap on the Nitrous Express bottle and flick the switch – the dyno says there’s over 1000hp and 900ft-lb of fun to be had. Yee-hah! In naturally aspirated mode, the engine happily runs on 98 PULP. However for added protection when running on the bottle, the SV1 cops a jet change and the tank is filled with C16. 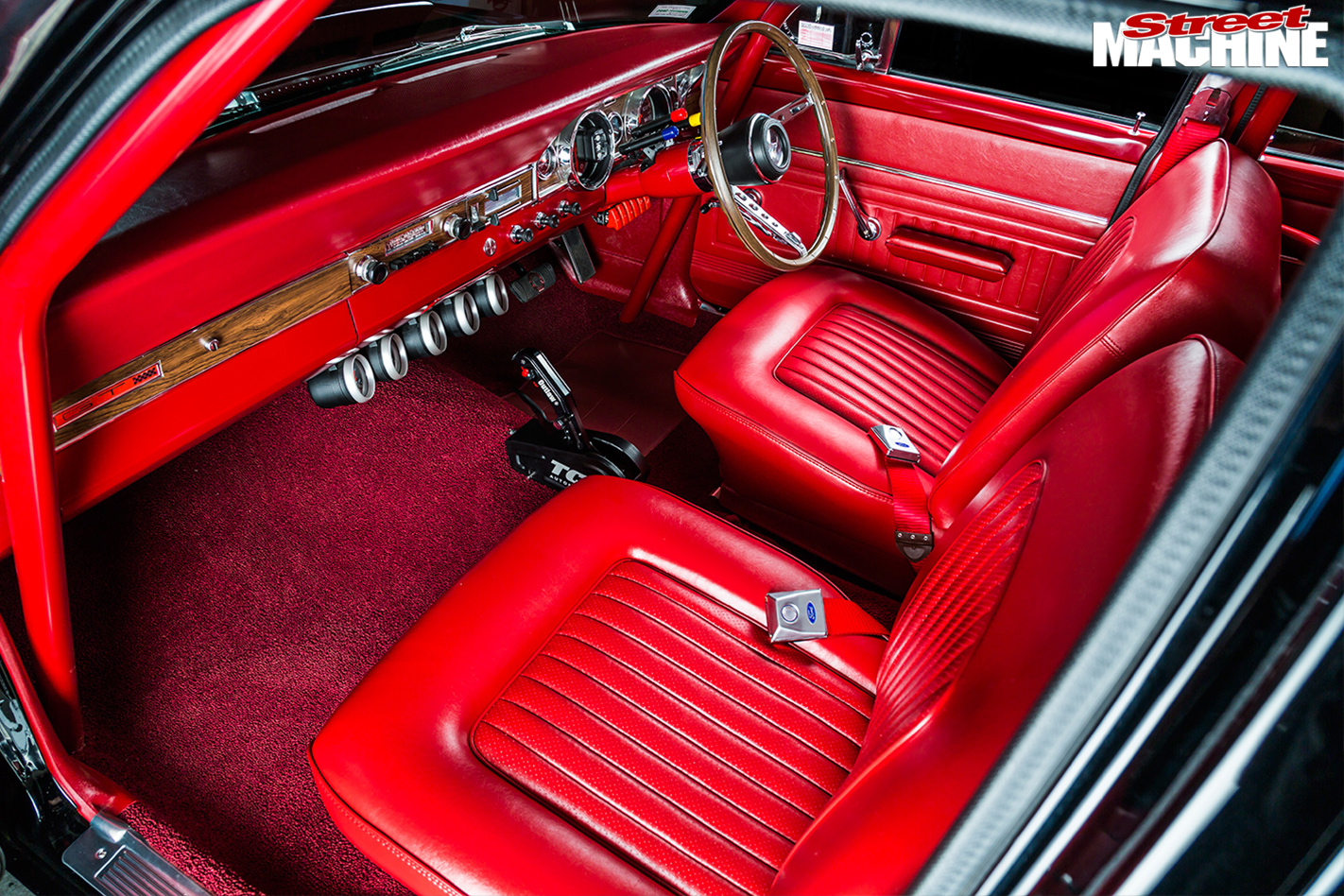 The not-so-shy red interior follows the GT theme for the most part. Muscle Motor Trimmers supplied the reproduction dashtop, door trims and new seat coverings, which were fitted by Straight Line Motor Trimming. Simple? Sure, but why go re-inventing the wheel when the original Broadmeadows interior guys nailed it? 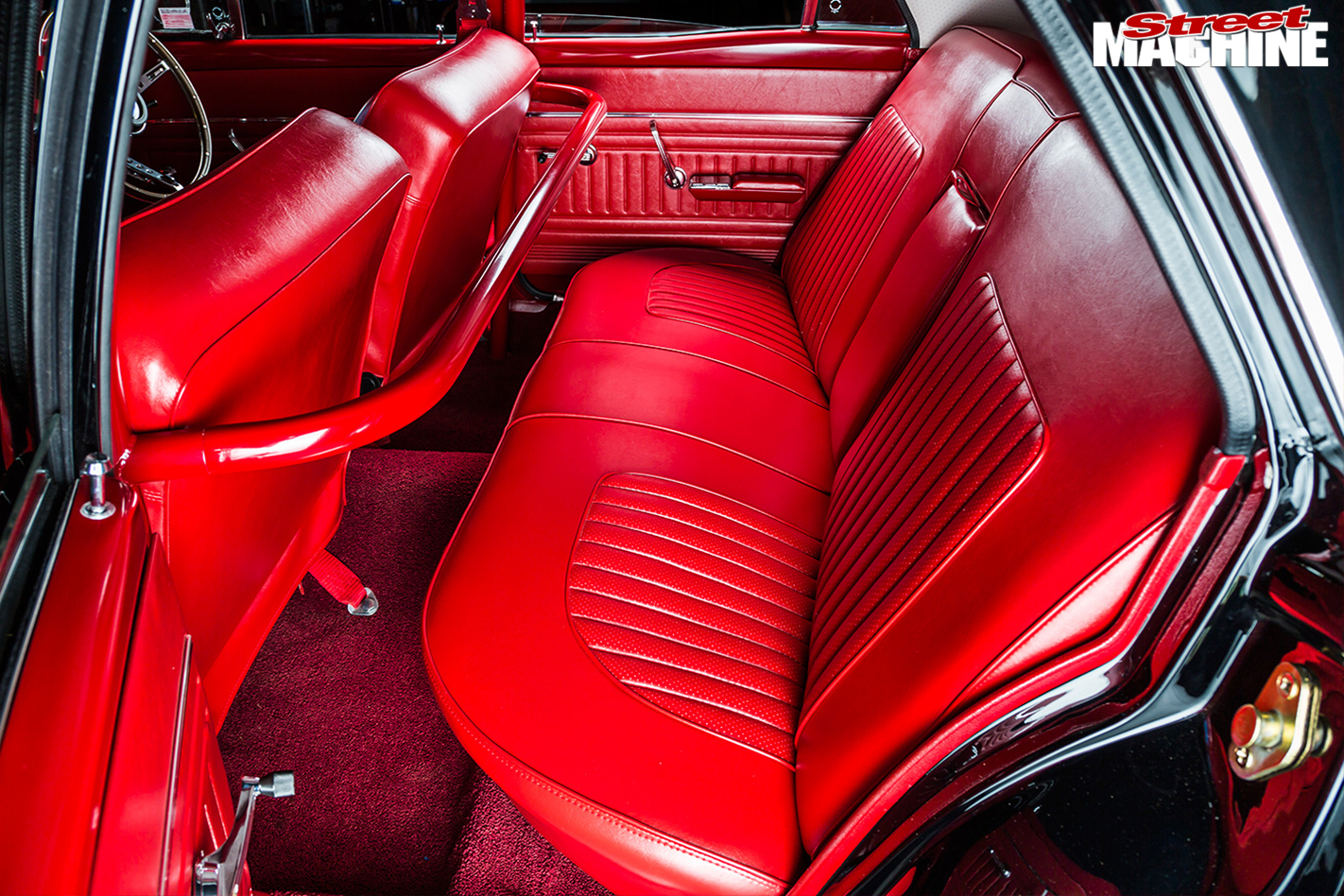 With the build dragging on for so long, Rhys finally set his sights on Summernats 29. “As soon as the entry forms came out in March 2015, I entered,” he says. “No more saying: ‘I’ll finish it this year’ – I was locked in, it had to be done.” 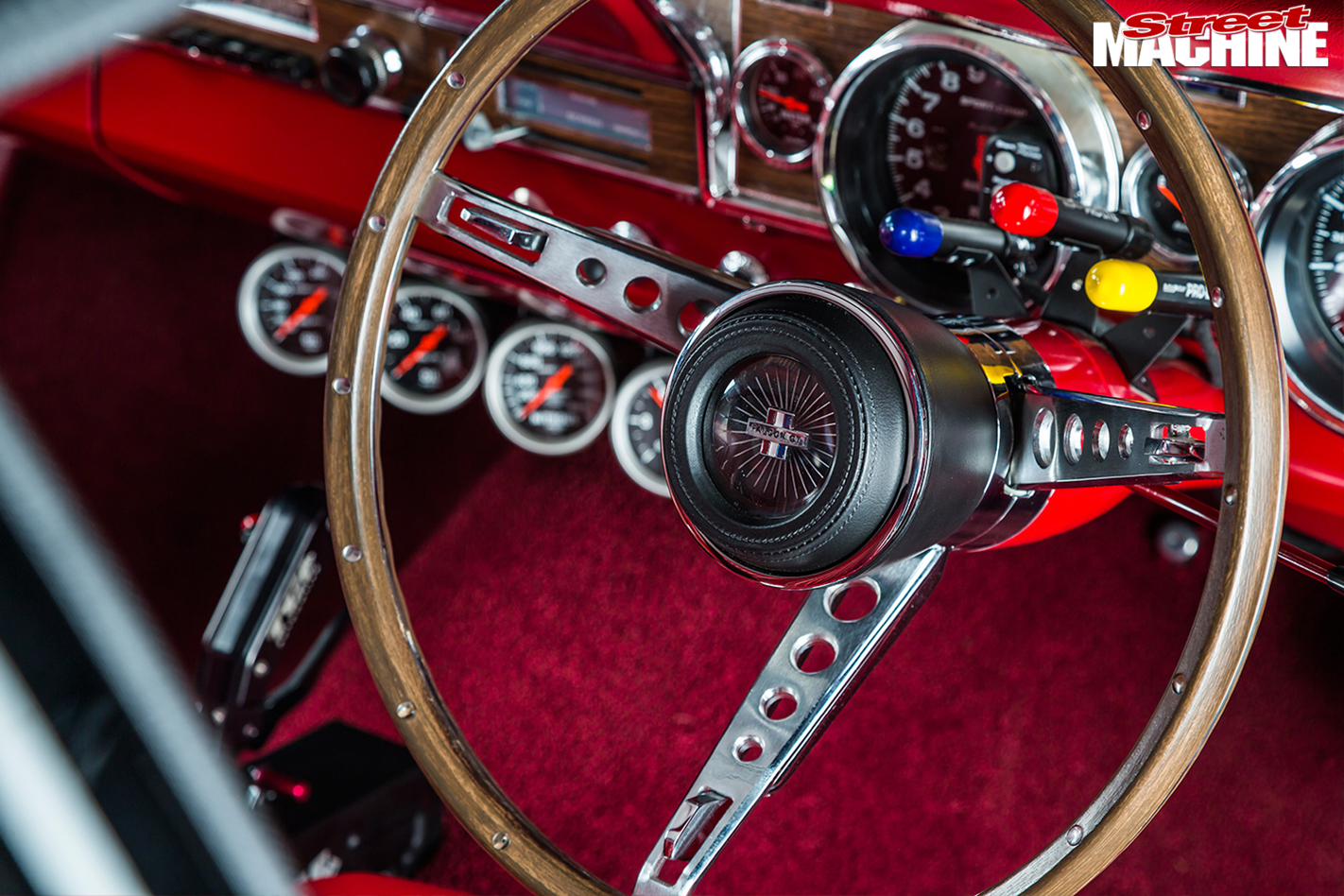 Thanks to a massive amount of help from his father, his two brothers Steve (’69 Camaro) and Mitch (XW GT), and an army of close mates, they got there – just in the nick of time. “I was working 38-hour stints,” Rhys says. “We started painting in November. On New Year’s Day, it didn’t even have doors!” 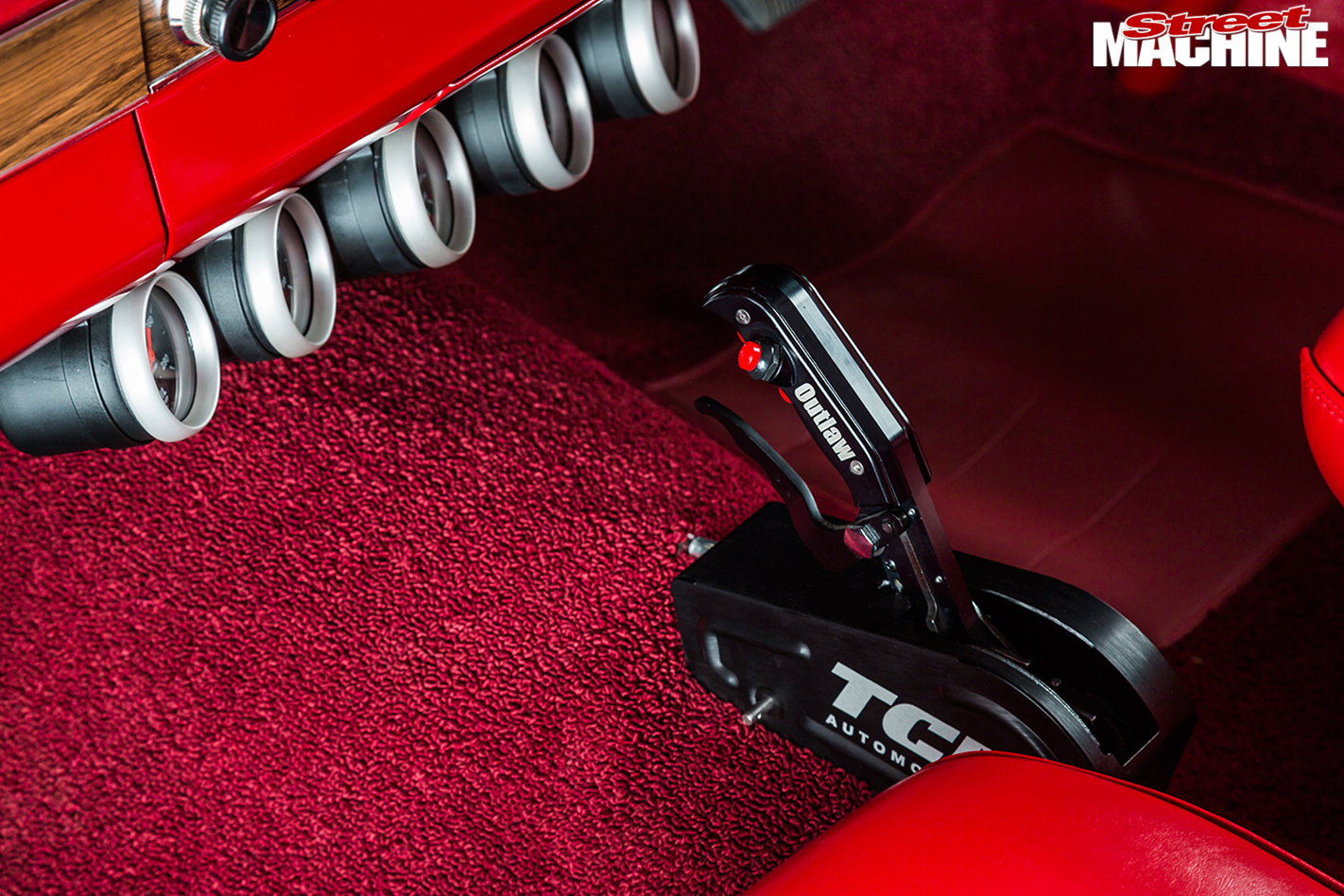 On the Thursday of Summernats, they dropped it off the hoist and took it for a run up the street. It drove well, so it was back to the workshop to add the stripes before loading it onto the Canberra-bound trailer. 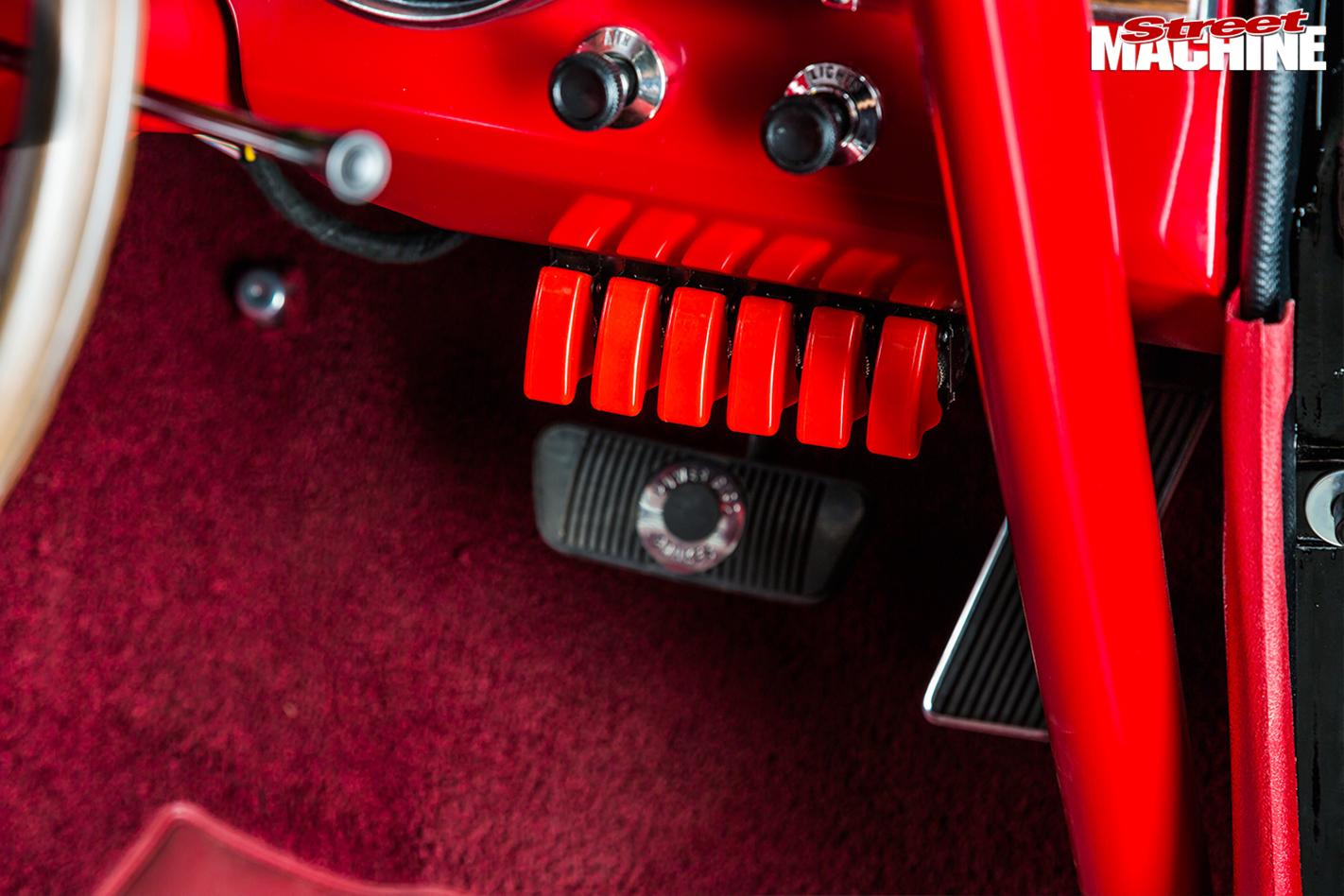 Rhys acknowledges that if it wasn’t for the big hours from everyone involved, the Falcon would never have made it – he can’t thank them enough. “Same for my beautiful wife Christalla for supporting me and sitting beside me on the late nights so I had company,” he says. “She even got her hands dirty a couple of times, rubbing primer and whatnot. Coming home with that winner’s trophy made it all worthwhile.” 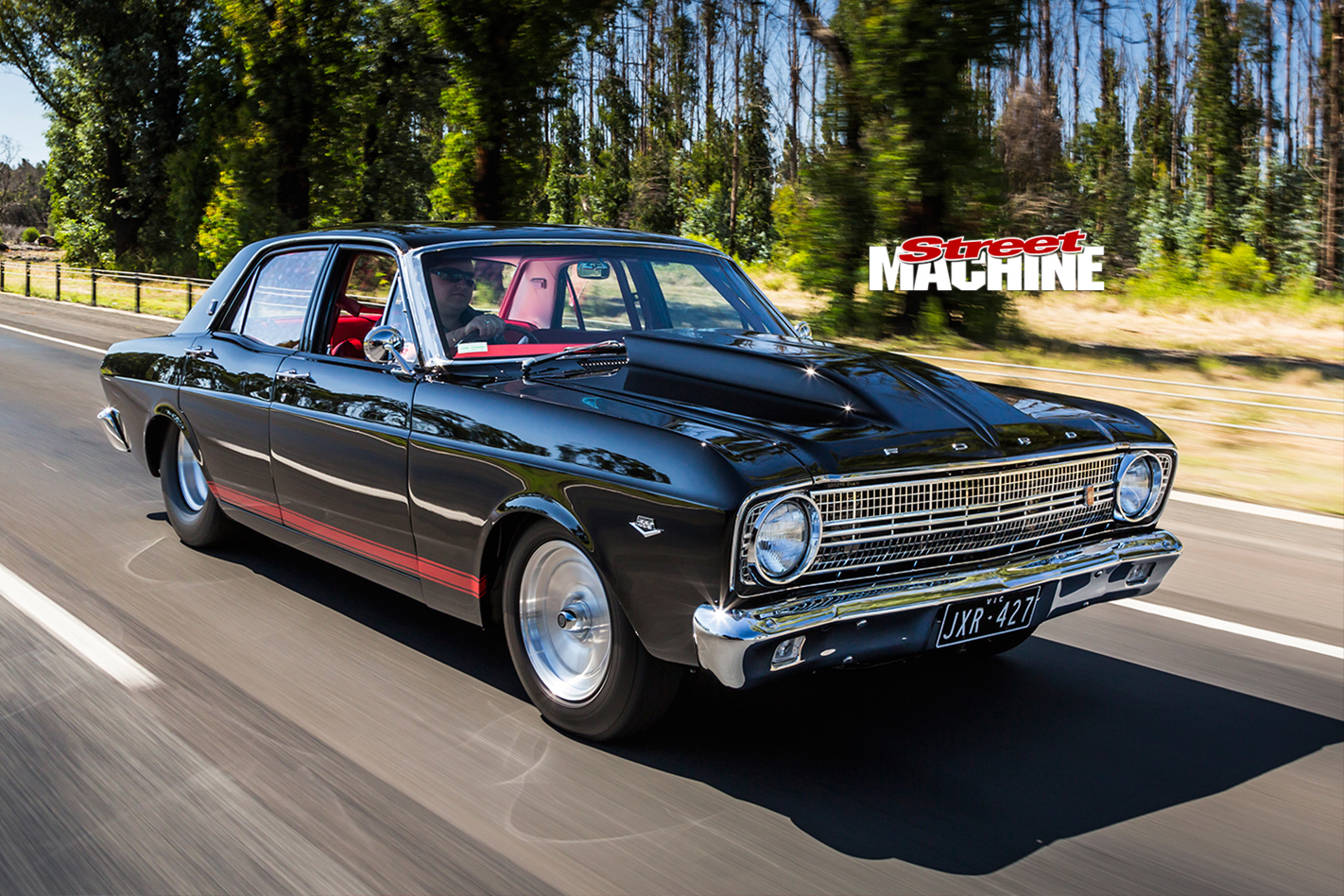 And before all of you bust a valve at the thought of Rhys heading to the nearest burnout pad with such a wondrous beauty, there’s been yet another rethink. “Probably not at the moment; it’s turned out a bit too nice to skid,” he admits.

We’ll see. My guess is the lad’s got smoke in the blood. I for one wouldn’t be at all surprised to see JXR-427 make the occasional appearance in the black colosseum. 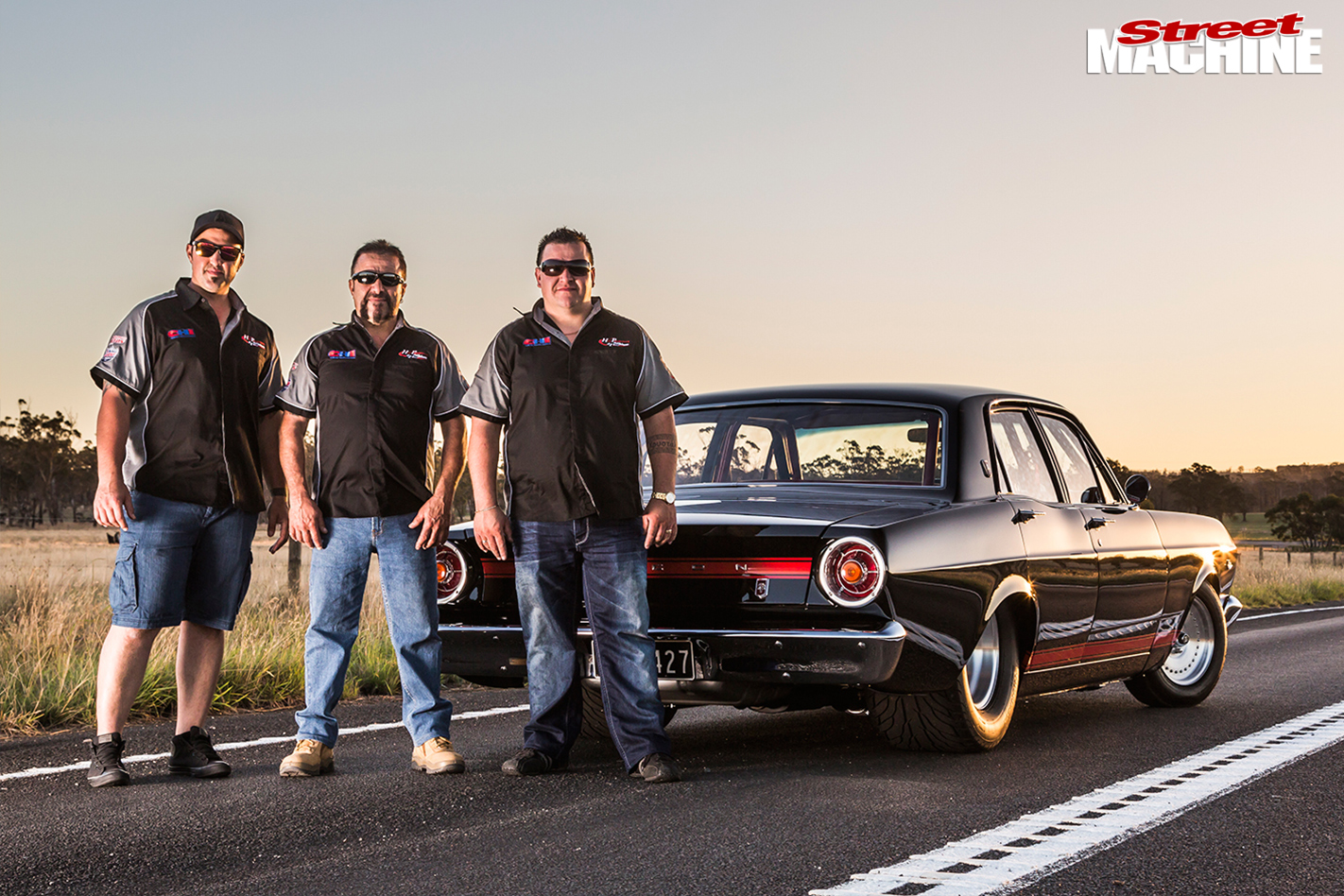