RIDES By Kam has done it again! When this 1970 Chevy Nova was unveiled at Meguiar’s MotorEx Melbourne 2014, the jam-packed crowd gave it the big thumbs-up. The car, dubbed KAM Nova, might even turn out to be more popular than Kamaro, the shop’s yellow ’69 Camaro. That car graced the September 2010 cover of Street Machine, before going on to shake up the US scene, including a Top 15 gong at SEMA 2012. In fact, that’s where the story of KAM Nova kicks off. “While at SEMA with Kamaro, I spent hours walking around, looking at cars and planning this build,” Rides By Kam proprietor Rob Zahabi says. “I even ran some ideas past Troy Trepanier to get his input. I didn’t want to do another Camaro but I still wanted a tough muscle car. The Nova is an awesome shape, which I felt was an untapped market.” 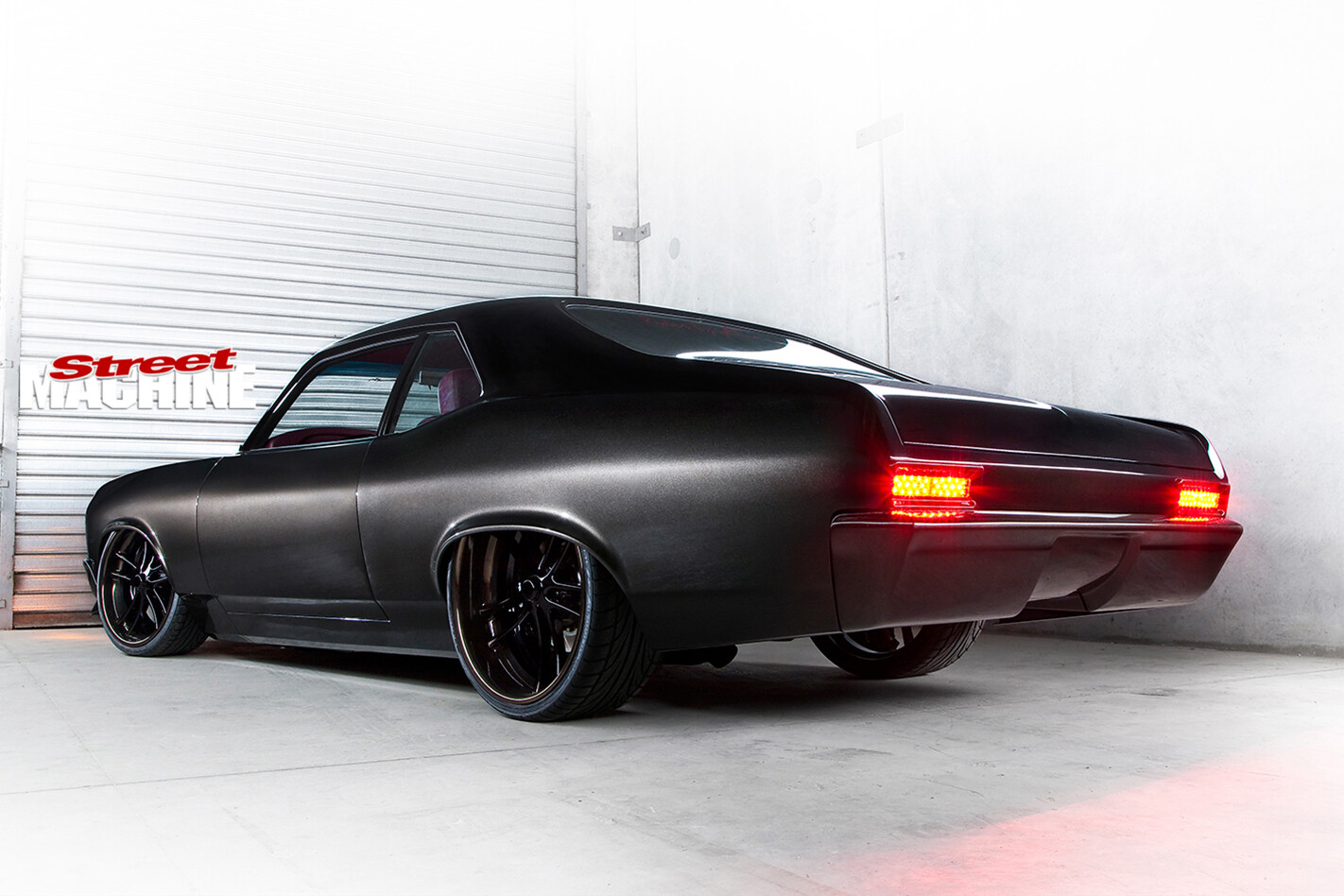 Back at Rides By Kam HQ on Queensland’s sunny Gold Coast, Rob set about tracking down a suitable donor vehicle. As fate would have it, the same guy who found Rob’s most recent Camaro (a blue ’69 streeter built after Kamaro) also turned up a mint one-owner Californian Nova for him. “It had a bench seat and column shift; it was a full-blown factory original owned by an older couple,” Rob says. “I’ve kept in contact with them and they’re keen to come to Las Vegas to see it when I display it at SEMA in 2015.”

KAM Nova was always going to have a pro-touring persona, complete with an aggressively slammed stance over fat, big-diameter rubber. Getting that spot-on was job number-one. 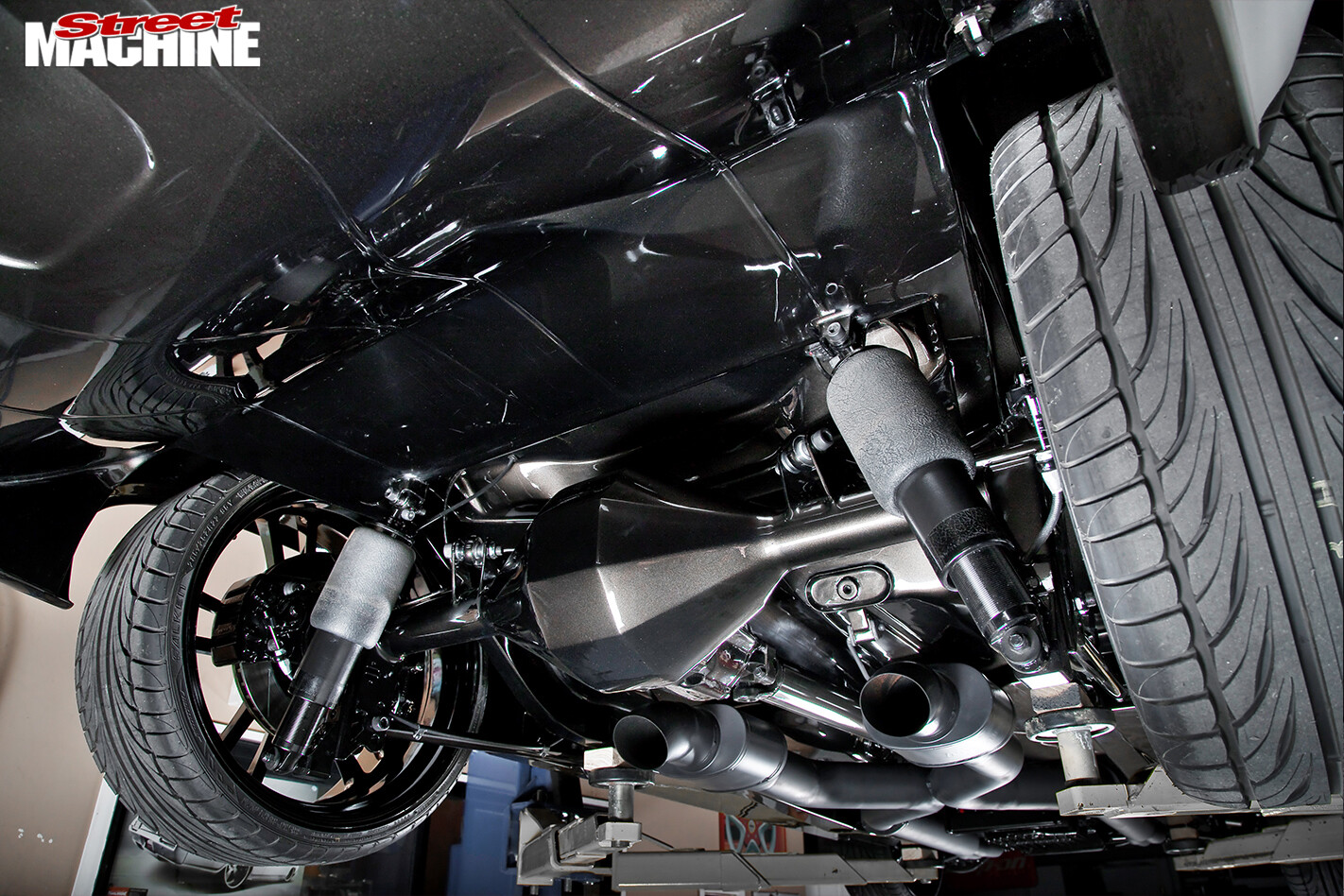 Under the rear is the tried-and-true combination of mini-tubs with a triangulated four-link, which mounts to a tubular truss system fabricated by Kam. The front, by contrast, was a ridiculous amount of work. Underneath, a ’70 Nova has about 90 per cent in common with a first-gen Camaro; the front subframe is identical. Given Kam’s experience with Chevrolet’s F-body, it should have been easy, but incorporating the huge Brembo brake package was a massive complication. Bringing it together required three separate companies all working hand-in-hand. The other thing that every self-respecting pro tourer needs is power, and a twin supercharged, 572-cube big-block certainly fits that bill. The long engine was built by Summit Racing’s parent company and was good for 750 horses before the blowers were added. It sports all the fruity gear: Merlin block, Scat crank, JE slugs and Brodix heads. Jake Edwards, the maestro behind Jake’s Performance, stripped it down to modify a few areas in preparation for the custom pair of symmetrical ProCharger F2s. These billet beauties are not regular inventory; in fact ProChanger took quite a bit of convincing before they agreed to build them. It’s fair to say that Kamaro’s SEMA success had a lot to do with gaining the blower outfit’s cooperation.

Rides By Kam manufactured the big-arse mount for the mirror-image puffers in house, while US-based Jones Racing supplied the unique 8mm-pitch, 99in-long drive belt. The whole set-up is damn wide – 1300mm to be precise. This hangs the blowers out over the tyres and created a host of packaging nightmares. There’s only 10mm clearance between the F2s and the tops of the tyres when all four Shockwaves are fully aired out. There was also bugger-all room for the four-inch piping, which had to snake its way up to the front-mount intercoolers. As with the unusual centre-fill radiator, the symmetrical intercoolers were custom-made by PWR from wooden templates constructed to determine what size and shape would fit. It’s all a bloody tight squeeze. 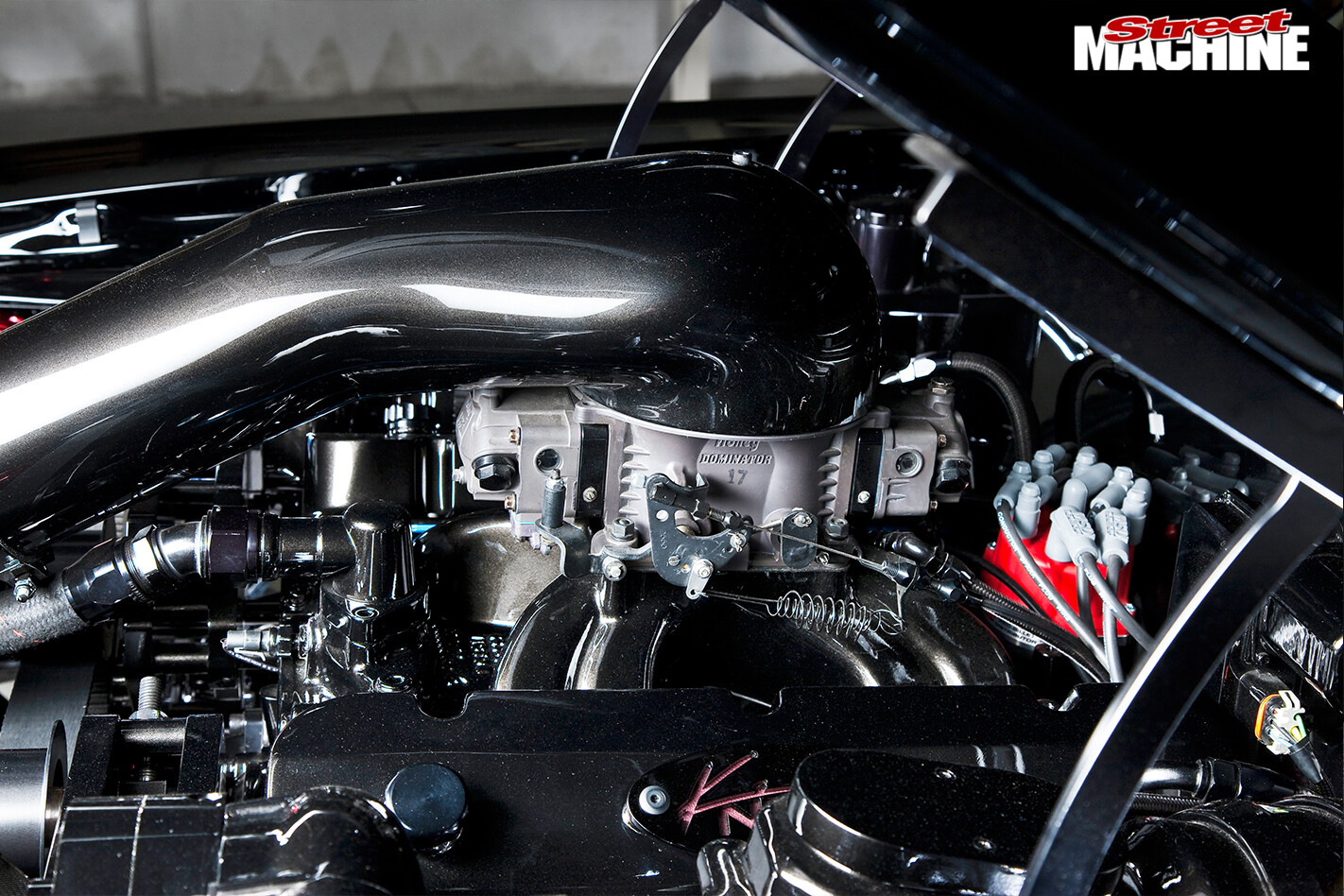 Like the rest of the car, everything in the engine bay is painted in House Of Kolor Jet Black – the only deviations being the bright blue rocker cover gaskets, the red tops on the ProRace blow-off valves and the piece of burgundy interior leather that shows through the waterjet-cut KAM Nova badges adorning the top of each rocker cover.

After a few major Aussie shows, including the Street Machine Summernats, KAM Nova is off to kick some butt at blue-riband US events like Goodguys Ohio and SEMA. And given America’s relaxed rego laws, the intention is also to rack up some decent road miles over there. 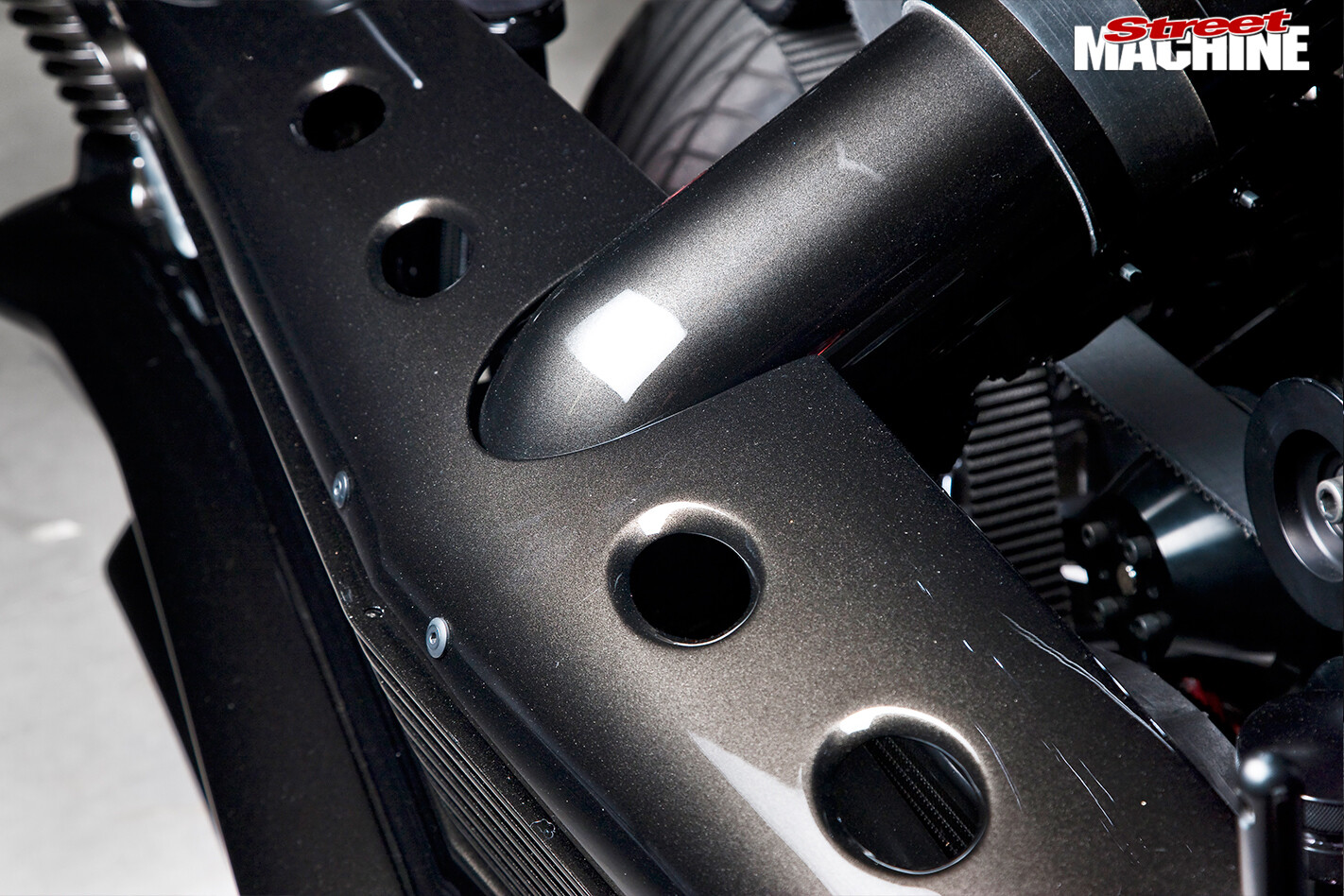 To make it more highway-friendly, the fully manualised TH400 that Jake’s Performance fitted to the back of the 1500hp mill uses a 10.4-inch converter. Rounding out the stout driveline is a brutish 35-spline Currie nine-inch, complete with sheet-metal housing and 3.55:1 Truetrac centre.

“The cooling system, the gearbox, the diff – it’s set up to drive 1000km if you wanted,” Rob says, though he admits you’d possibly need a fuel truck to do so. Mind you, the pump gas-happy engine combo means you can fill up at virtually any servo. As with all Detroit muscle cars of this era, the 1970 Nova had a lot of moulds and trim work, most notably around the leading edge of the bonnet, the mudguards and side glass. All of these leave unsightly areas when removed but Kam wanted to keep the front windscreen mould and ditch the rest – including the drip rails, door handles, boot lock and side-marker lights. This meant remanufacturing all the deleted moulds in steel, then welding and blending them back into the body.

The front quarter-vent windows got the heave-ho, a billet grille replaced the factory unit, and the original rectangular lights in the front bar were replaced with round jobbies. For increased intercooler airflow, the centre section of the bumper was scalloped out and oval holes were added to the front splitter as well. 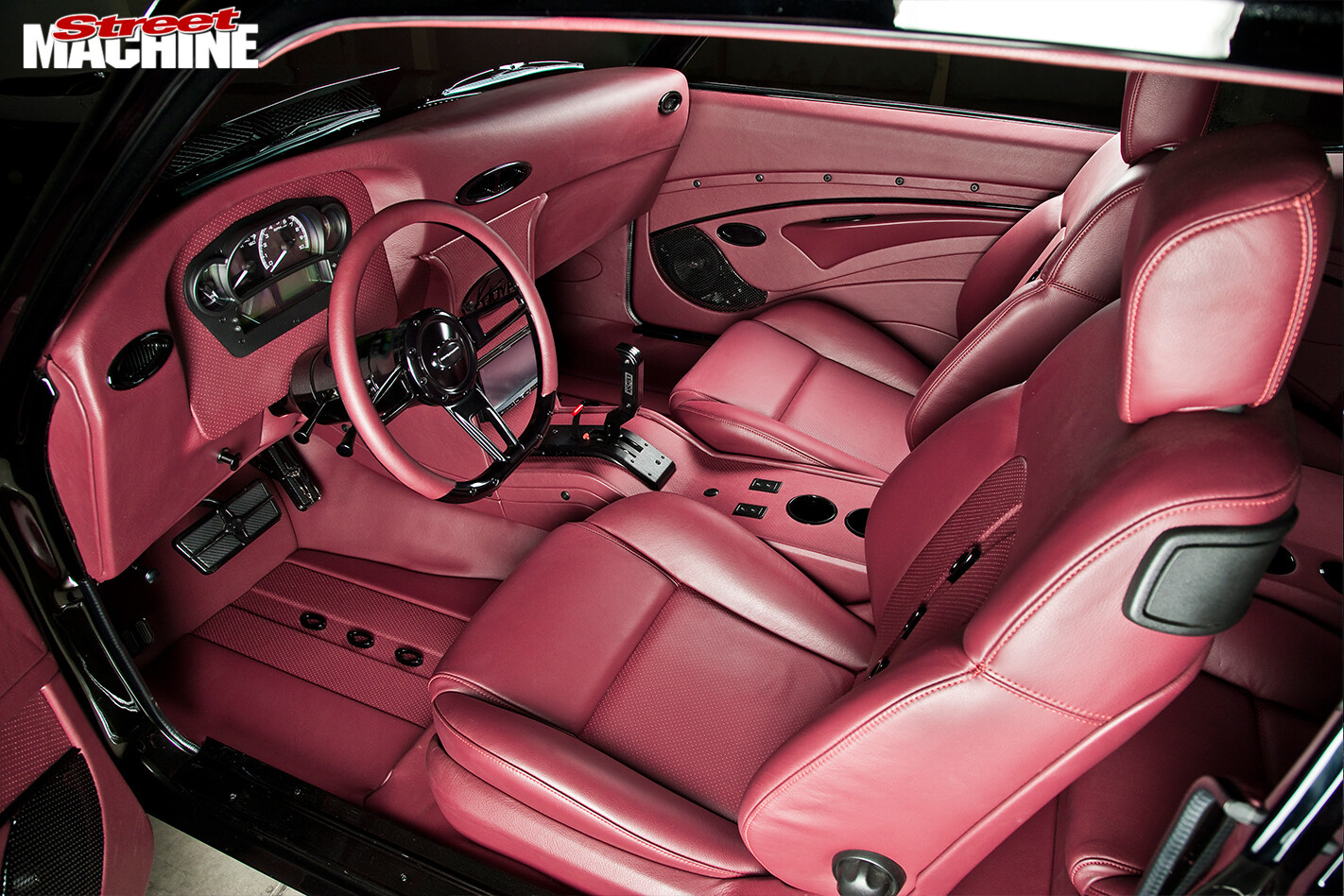 The sills were extended 80mm and now sweep smoothly all the way under and across to the smoothed chassis rails. These butt up to the rest of the floor, which was raised to clear the four-inch exhaust built by Fabrication 81. The guys there also fashioned the low-profile fuel tank, which is sandwiched between the boot floor and the flowing undertray panel that runs from the bumper to the area above the diff.

On top of the mods already mentioned, the extensively reworked bars have been shortened and tucked into the body, and the undersides of the bonnet and boot lid were filled and smoothed. Rides By Kam then spent countless hours sharpening all the lines and getting the body arrow-straight. The slick, smooth finish makes Kam Nova look like it’s been carved from a solid block of plastic. Although Rides By Kam has evolved into a one-stop build shop, its foundation was in motor trimming, so you would expect the interior to be something else – and KAM Nova doesn’t disappoint. The entire dash, full-length centre console, rear parcel tray, rear seat, door trims and flat floor combination was made from scratch and everything’s trimmed in contrasting burgundy leather. Note all the black interior trim details: pedals, Dakota Digital gauge cluster, B&M Pro Ratchet shifter, steering wheel, vents, speaker grilles, kick strips, and the dozens of neat billet oval rings. All these pieces were painstakingly painted black, much of which was done by Street Elite Restorations, which was also responsible for laying down the exterior paint. Perhaps one of the most impressive aspects of the build is that it took just eight short months from a factory gold Nova disappearing into Kam’s workshop to the transformed black beauty being unveiled at MotorEx. For a machine of this calibre, that’s downright amazing.

“The whole car has been a complete money pit,” Rob says. “However, when you’re trying to pioneer stuff and put your custom touch on everything, that’s what makes it a true custom. That’s why it was worth it.”